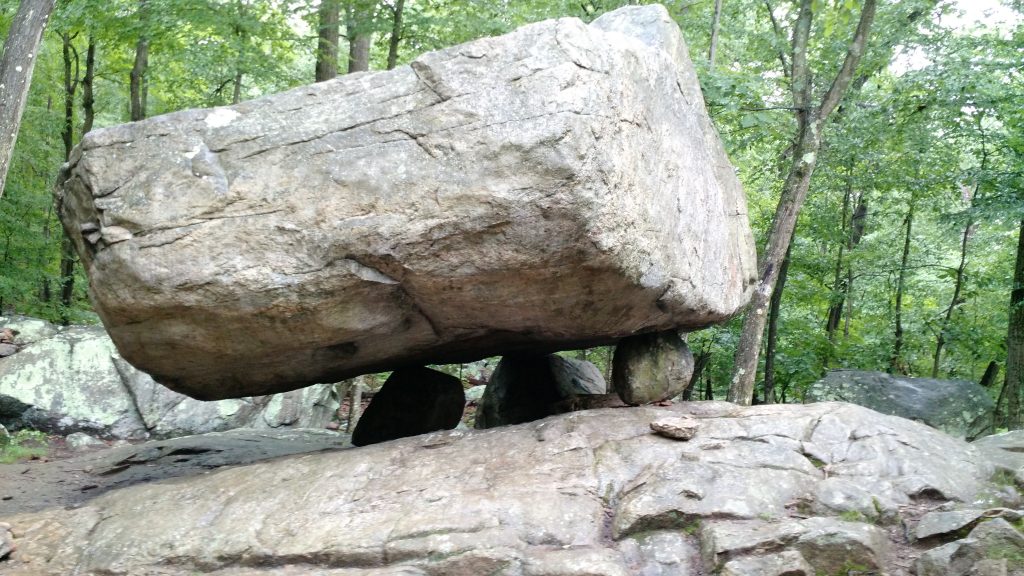 On Father’s Day (or the weekend after) I took my dad on a trip to a park that neither of us had hiked previously, Pyramid Mountain – part of the Morris County Parks.  The trails at Pyramid Mountain are known for their glacial erratics – we definitely wanted to see Tripod Rock, but ended up passing a bunch of different rocks.  The day started out nice, however as we got closer to the park it started to rain.  Since we were most of the way there, we were not about to turn back; and it was not yet raining that hard.  That would change.

There were not many other cars in the parking lot when we arrived – probably pretty typical for a rainy day.  I can imagine with the sun out and nice weather that parking lot can get packed. We stopped into the Pyramid Mountain Natural Historic Area visitors center before we started the hike…wow!  What a treat.  The exhibits were great (and given the weather) we had the place to ourselves.  Definitely stop inside if you are hiking in the area, the visitors center is well worth it.

The trailhead was well stocked with maps, and the trail maps for the park are very well done – with a great legend, marked trails and easily read.  It was easy to follow paths, and that I recall, everything was well marked.  We started on the Blue trail and took that to the White trail, which we followed for a while.  We stopped off at Bear rock, a HUGE rock at a trail junction, where we saw the only other people hiking in the park.  We debated cutting over on the Blue/White trail and shortening the hike – it was raining pretty good at this point.  But, we decided to carry on – taking the Blue trail around Bear Swamp and towards the ridge.  There is one steep section that goes up a short distance as you climb onto the ridge.  It’s steep.  I felt it in my thighs when we got to the top.  A short distance from the the top of that climb brought us to Whale Head rock, another very large rock.  I’ll admit, I really did not see the whales head in the rock.  Onward, we hiked on the Red / White-striped trail until it junctioned with the White.  We took the White to Tripod Rock where sits one of the most famous erratics in the park.  I took some pictures here, and this was the only place I took any pictures due to the rain.

After tripod rock, we continued on the Blue trail while on the ridge.  A short detour to Lucy’s Overlook, which probably would have had a magnificent view if it were not cloudy and rainy, was well worth the rocks and the climb.  This “detour” is clearly marked on the Blue trail.  Back on the blue, we hiked until we junctioned with the Yellow and took that all the way back to the visitors center.  (I believe we got back on the Blue for a 300 feet or so to get to the parking lot.)

We had a great time despite the weather.  Turkey Mountain is “across the street” and is something I look forward to coming back to hike.