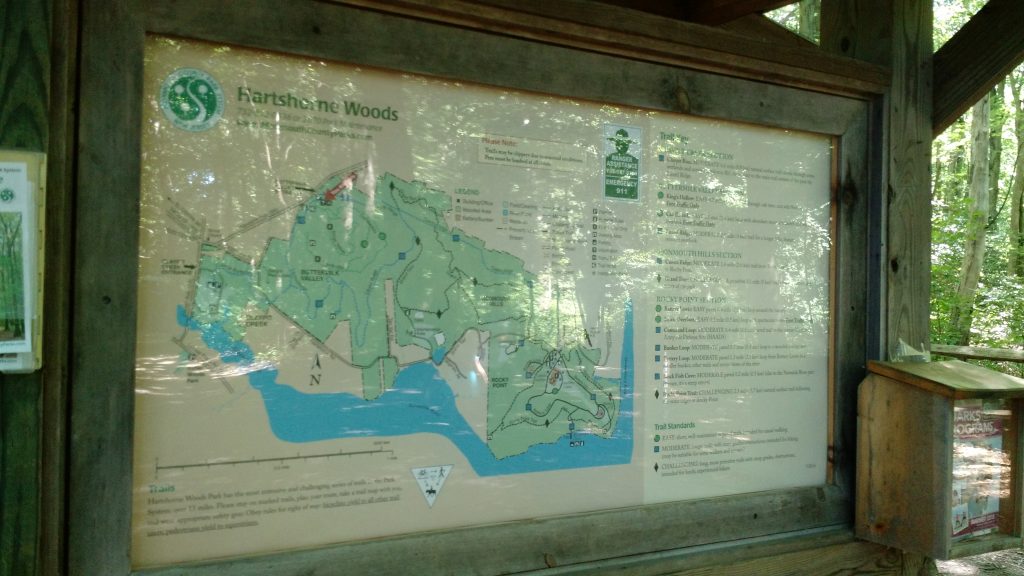 We’ve had a couple weeks of oppressive heat and humidity, culminated by thunderstorms yesterday.  Those storms chased out the humidity and lowered the temperatures, and today was absolutely gorgeous.  I woke up to upper 60 degree temperatures and clear sunny skies.  I know I’m somewhat booked the next couple of weekends, so I figured I would get a hike in today; and take advantage of the excellent weather.  Off I went on a short drive to Hartshorne Woods, the Buttermilk Valley entrance, to hike the western side of the park.  I had hiked the eastern side almost exactly two years ago.

I thought I was smart by getting up early and getting to the trail head before the bikes got there and before it started to get warmer.  I wasn’t smart enough.  I got the last quasi-legal spot in the lot. 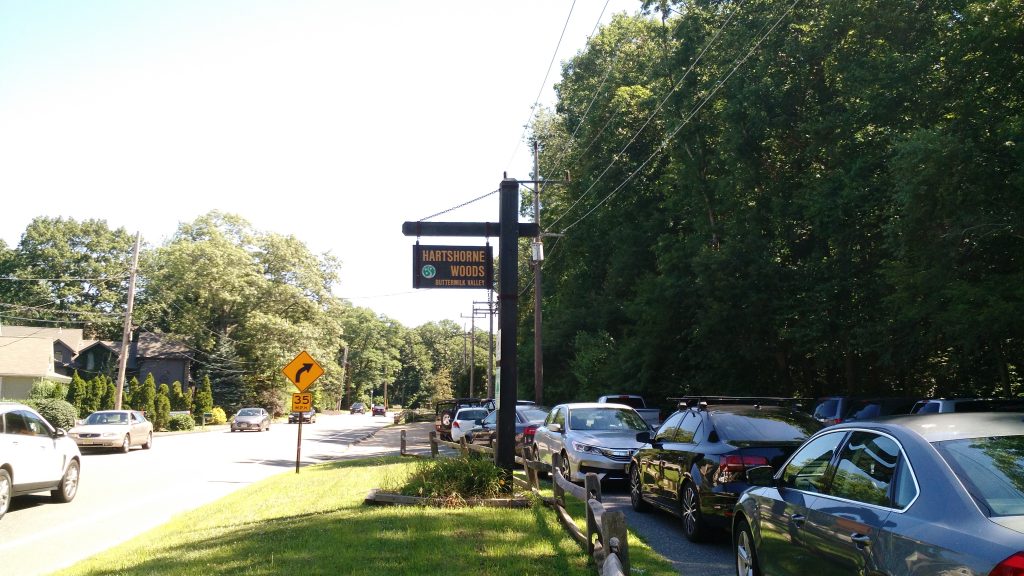 I started on Laurel Ridge (rated medium) which climbed to the top of the hill quickly.  I’d guess a hundred or so feet.  The trail was wide and very easy to follow, despite the lack of blazes.  With no humidity and comfortable temperatures (70) it was a great walk. 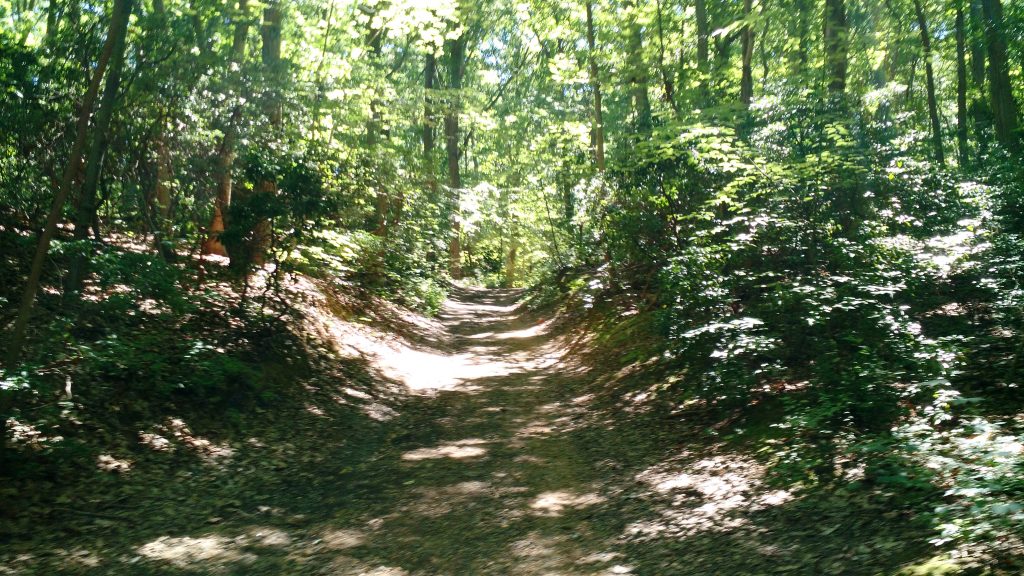 After a short walk, I turned on the Grand Tour (rated difficult).  The trail type changed, the park calls it more “primitive.”  The path became more narrow, steeper in sections, with lots more rocks, roots and even a couple of switchbacks.  Bikes were in out in force and there were plenty of spots I had to move over so as not to get run over. 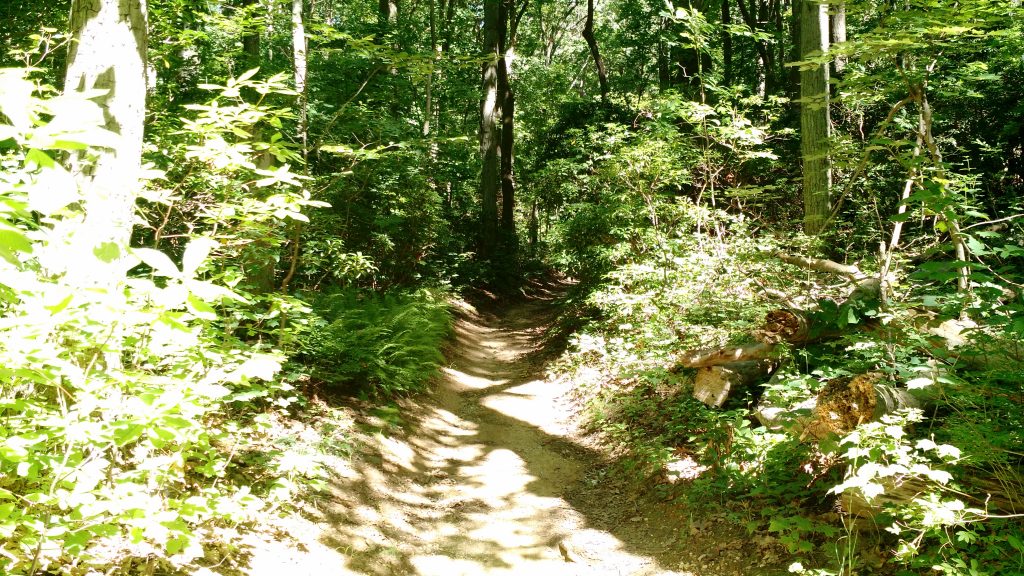 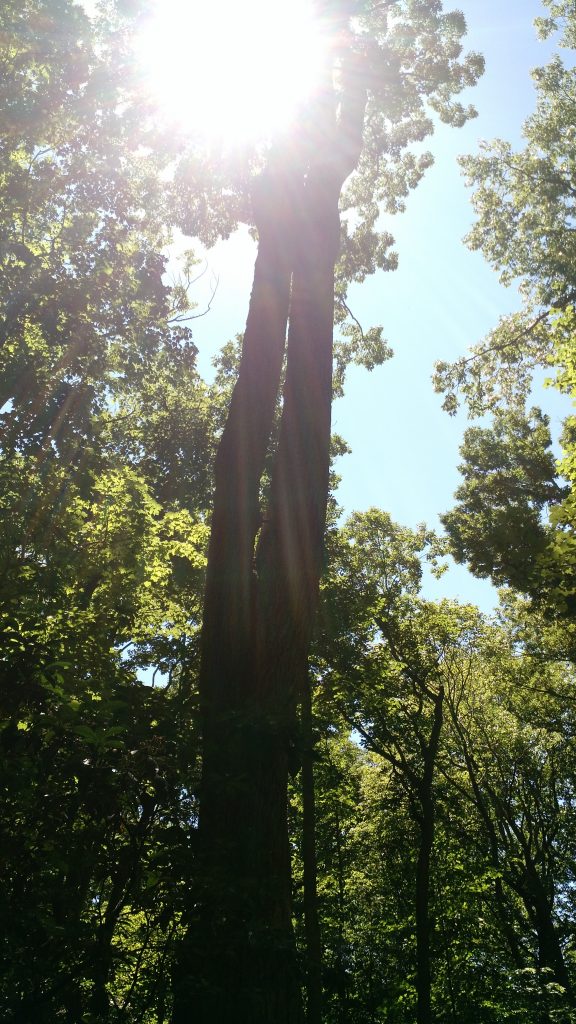 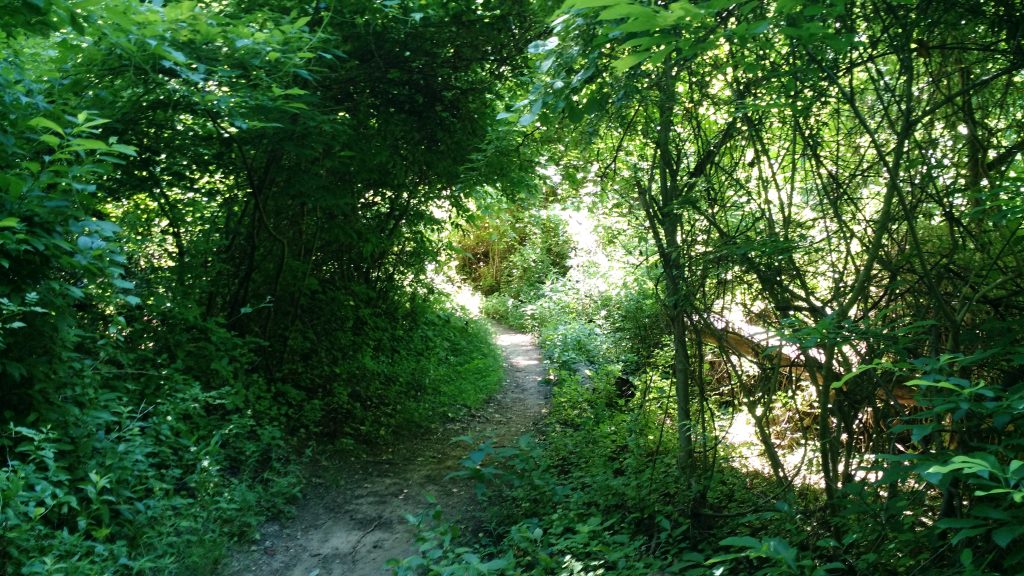 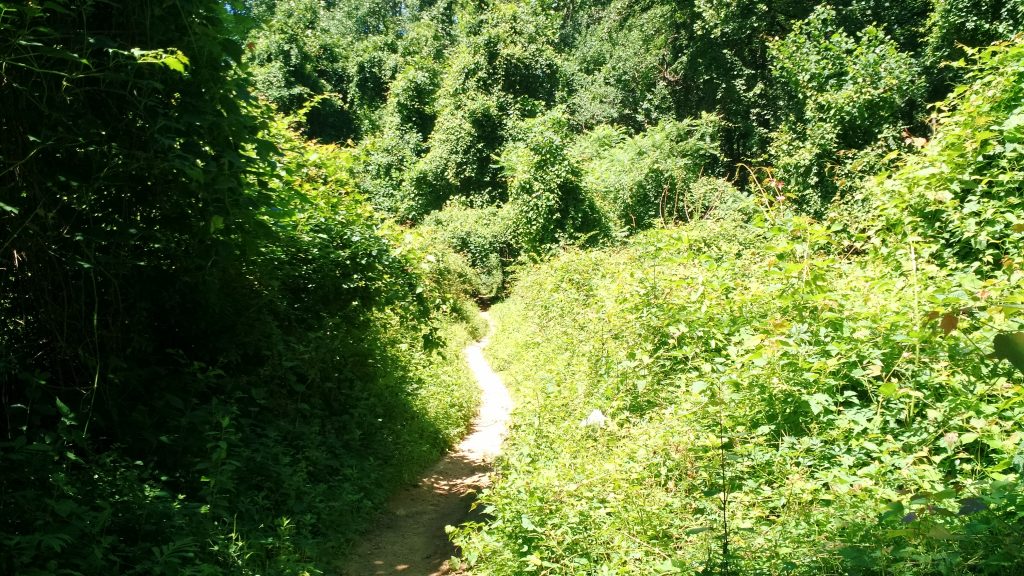 The Grand Trail reconnected with Laurel Ridge, and surprisingly did not get “easier” despite changing difficulty (according to the park.)  There were lots of ups and downs.  As for wildlife, I only spotted one deer, numerous squirrels (which I thought were stalking me) and a chipmunk or two.  Above I could see some hawks circling overhead.  Here’s what the sky looked like: 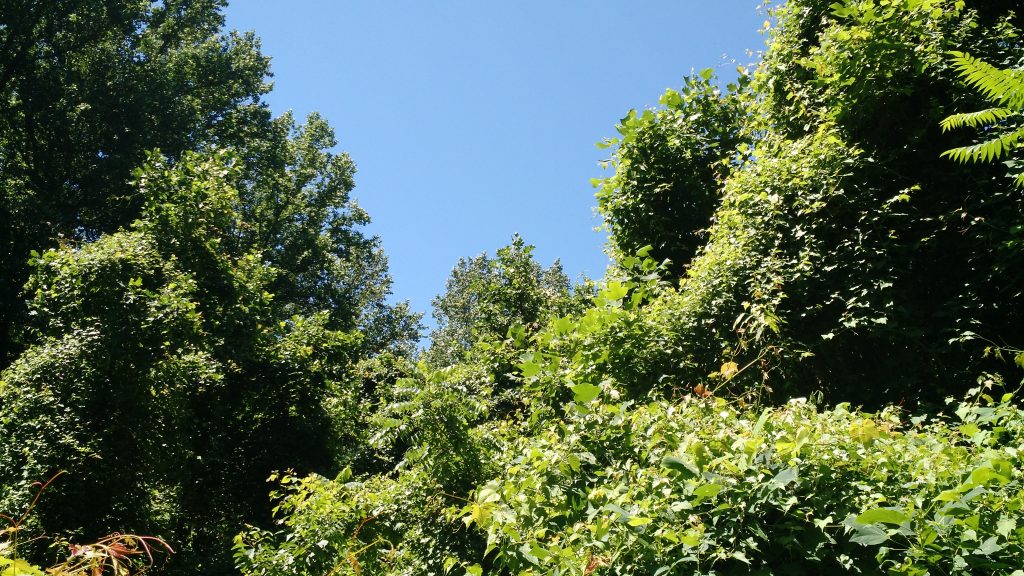 There was a short trail off Laurel Ridge that led to an overlook.  As the park overlooks the Navesink River and Claypit Creek, I figured I would take the trail to see what the overlook actually overlooked: 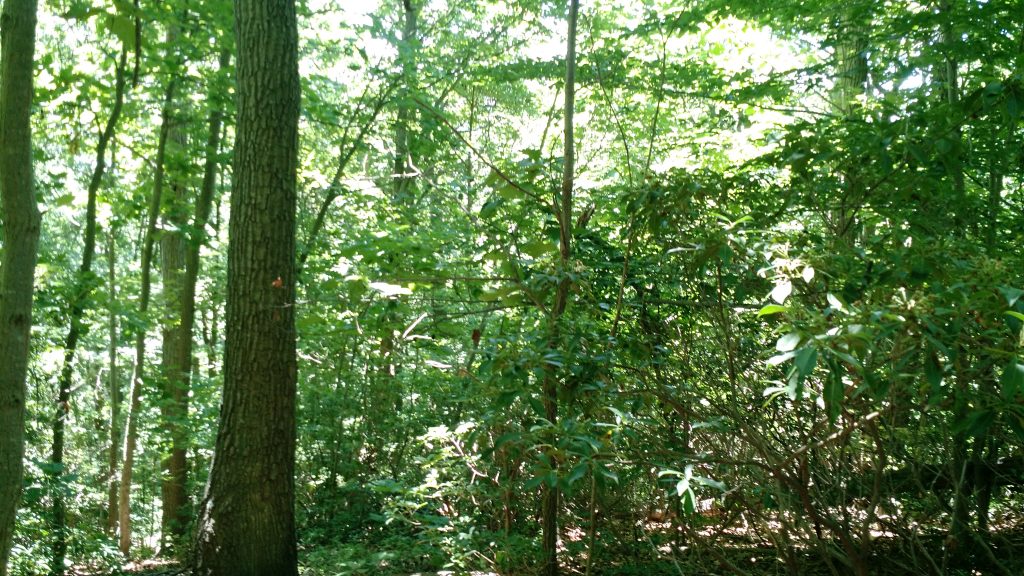 Yep, I’ll have to come back in later Fall, Winter, or Spring to see what the overlook shows.

I remember hiking this section of Hartshorne Woods over 30 years ago with my dad.  There were spots I walked through that were vaguely familiar, more like deja vu.  I don’t remember bikes back then.  And I don’t know how much of the Eastern part of the park was part of the park system. 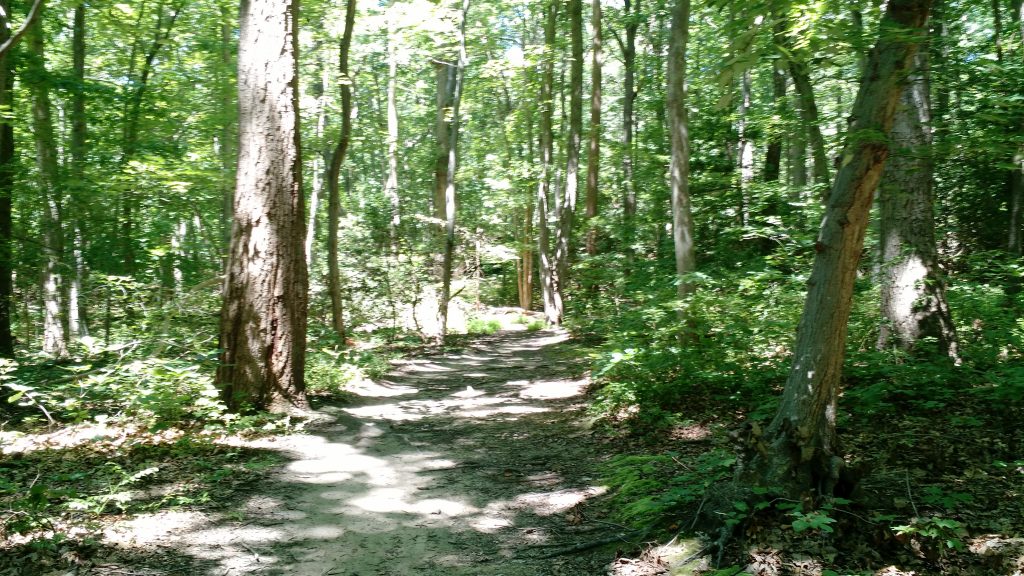 All in all, this was a great hike on a great day.  Highly recommended.  However, I will point out, there were two trail junctions that I had to get out my phone and check AllTrails for; as the signage on trail was not good.  The map didn’t help as the junctions had unmarked trails coming in as well – something I’ve remembered from past Monmouth County Parks.  The trails lead well enough into the woods that you lose the traffic noise of Navesink Avenue and Route 36.  And, only occasionally did I hear the banner planes towing their signs to Sandy Hook.