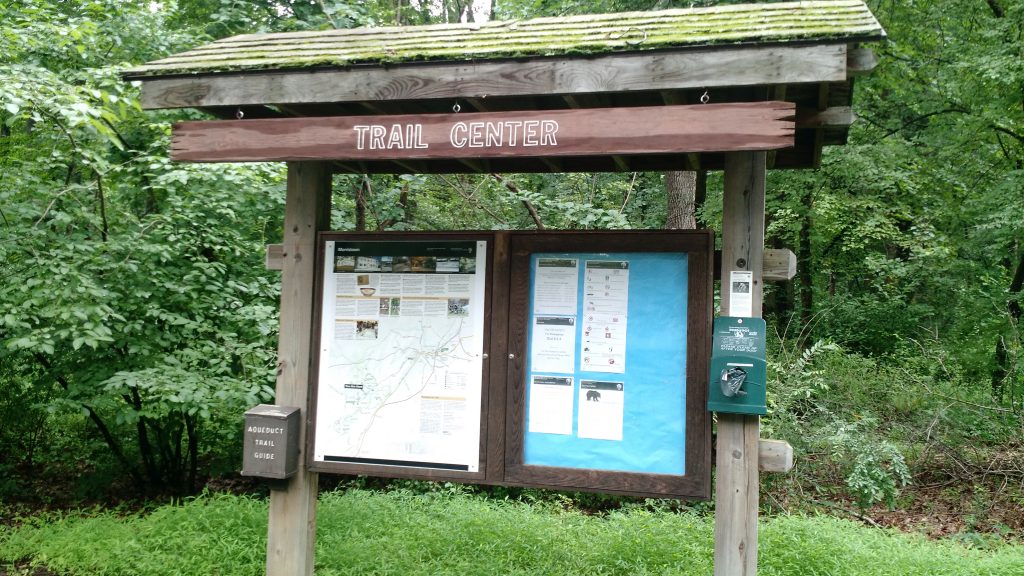 Trails:  Blue Trail (which included parts of the Patriot Path)

There are two lessons learned from this hike:  1:  If the weather says there’s a potential for flash floods, believe it.  And 2:  If your printer won’t print out the trail map, take the time to fix it, find another map, or ensure there is adequate cell service at the place you’re hiking.

The weather called for thunderstorms and a potential for flash flooding throughout the day.  It rained early in the morning, yet by the time I walked the dog it was sunny and the ground was dry.  I thought, perfect day for a hike, as long as the rain will hold off.  Hockey season starts next week, I don’t know what my schedule will be like, so I had better make the most of the free time.  A quick glance at the weather map showed rain in the area I was hiking, but it was moving out.  So, off to print a trail map and head up so as not to waste time.  Except the printer wouldn’t print the map.  Rather than spend some more time, I figured I would grab a map at the visitor’s center, or worst case, use All Trails on my phone.

I drove up in bright sunshine and chastised myself for not bringing sunglasses.  As I pulled into the parking lot, clouds were just starting to build, but nothing serious.  And it would be all down hill from here, so to speak.

First stop is the visitors center in order to pick up a trail map.  But what’s this?  Closed, on account of no power.  I knew rain had blown through earlier, could it have knocked out the power?  Possible, I guess.  It took a few minutes to find the trail head, I ended up driving the Grand Parade Road and parking at the Trail Side parking lot, where most of the trails terminated.  Fortunately, I drove by the Soldiers’  Huts, which I planned to hike to.

As I got out of the car and loaded up All Trails..whamo.  Nothing.  I could record, but no trails.  Funny thing, you need cell service to interface with the maps (GPS ran fine.)  And there wasn’t cell service here (at least, for Verizon.)  Well, I got all the way here, I was at least going to walk.

I headed for the Blue Trail.  And it starts out on an old “road” used by the soldiers while camped here. 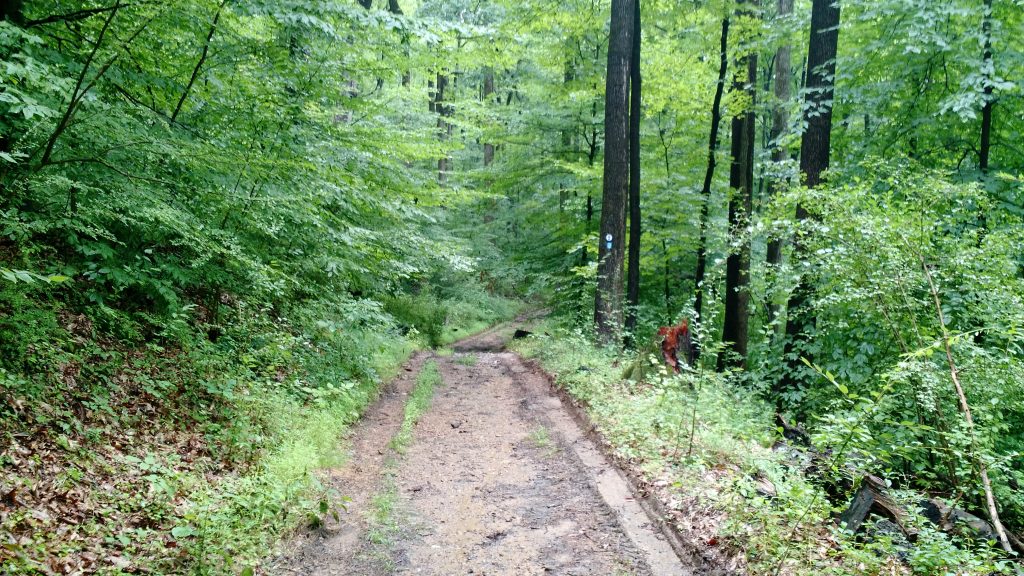 Today the trail was soft, spongy in some spots, with water pooled every so often.  But the trail was wide and soft dirt with infrequent rocks, and pleasant to walk.  Not having a map was a little unsettling until I came to the first trail junction. 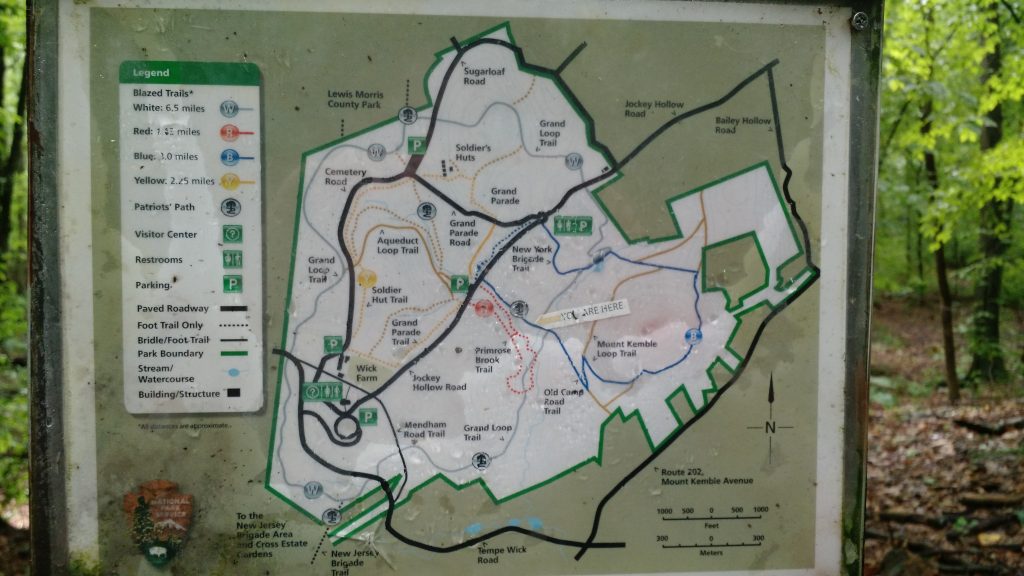 They have a trail map ON THE POST at the actual junction.  So, I took a quick picture so that I would have some reference if needed.  My plan was the Blue Trail, cut over to the Orange, and go by the Soldiers’ Huts.  I saw the typical fauna:  squirrels, chipmunks, some birds.  Fortunately, no bears. 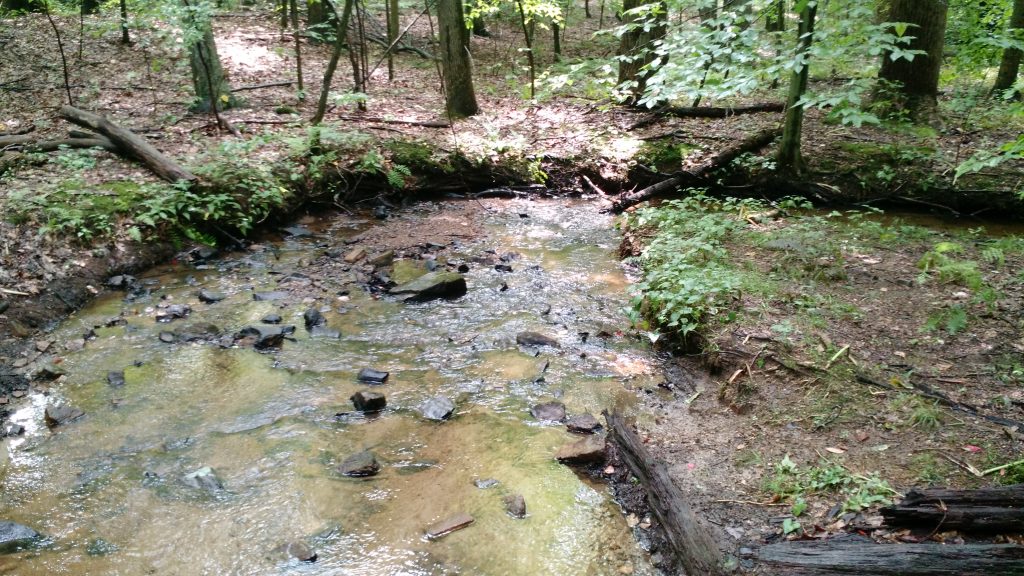 I passed a couple more junctions, each with a map, AND a “you are here” marker, and thought, this should be a pretty nice hike for not having a map.  Heck, even the sun came out. 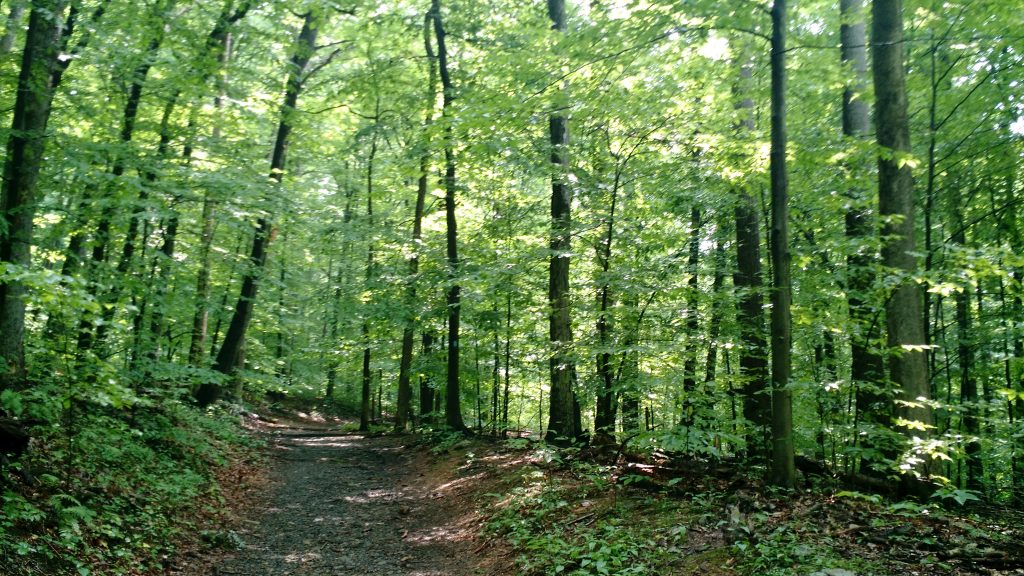 It wasn’t as hot and humid as last week, 75 or so, with a lower humidity.  My plan was to do about six miles, and with this terrain, that didn’t figure to be so bad.  I noticed clouds were starting to build, and I didn’t see the sun as much. 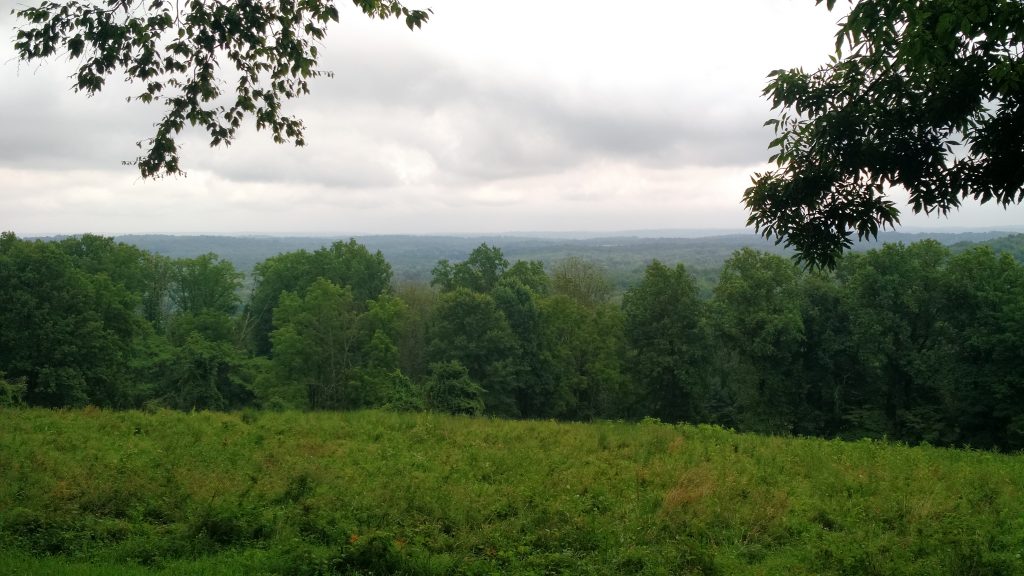 There was a bench and table at this overlook, which must look absolutely fabulous on a clear day.  The marker at this spot indicated that Stark’s Brigade camped here  during the Revolutionary War.  The sign at this spot was very informative.  And, there was a monument to the occasion built from stones from the officers’ chimneys. 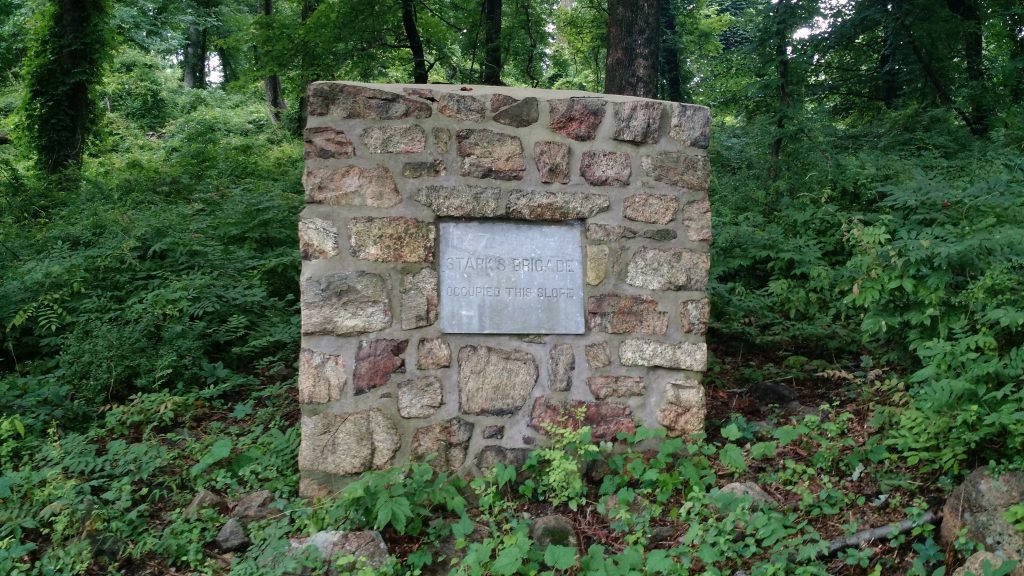 After snapping a picture, I headed off.  The trees were real tall with a thick canopy and as I walked, I noticed it started getting dark, real dark.  At one point I thought I might get out my headlamp.  It was 1:30, yet it felt like it was night, almost like when I hiked the Brisbane Trail at Allaire last year when the sun set faster than I thought.  And then I heard it, it sounded like wind, yet when I looked up, the leaves were not moving enough.  Sure enough, it was starting to rain.  But under the canopy, I wasn’t really getting wet.  I did think that I wasn’t going to do all of the trails I wanted to as I had a small bit left of the Blue Trail. 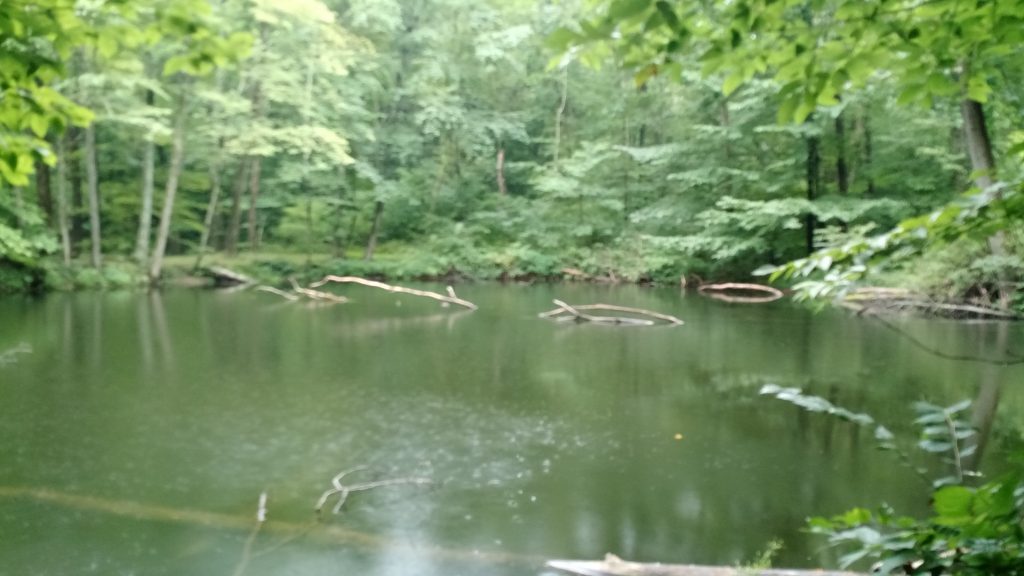 You can see the drops hitting the pond.

After the pond, the trail wandered through open space.  And then the rain really started coming down.

By the time I reached the road where the next junction was, it was pouring.  Torrential.  By far the hardest rain I’ve hiked in.  The signpost said .4 miles back to the car, most of it downhill – and off I went.  Not even a quarter of a mile in, water was cascading down the trail I was on.  How I didn’t slip on any of the rocks is a miracle.

Suffice to say, no more pictures after the pond.

I cut it short, reached the car, changed into dry clothes, and decided to head home.  I’ll have to come back to do the other trails I wanted to hike, and to see the visitors center.

Ticks:  0 – surprising.  I wore shorts, which I don’t normally do, and there were a couple of spots where the trail was overgrown.