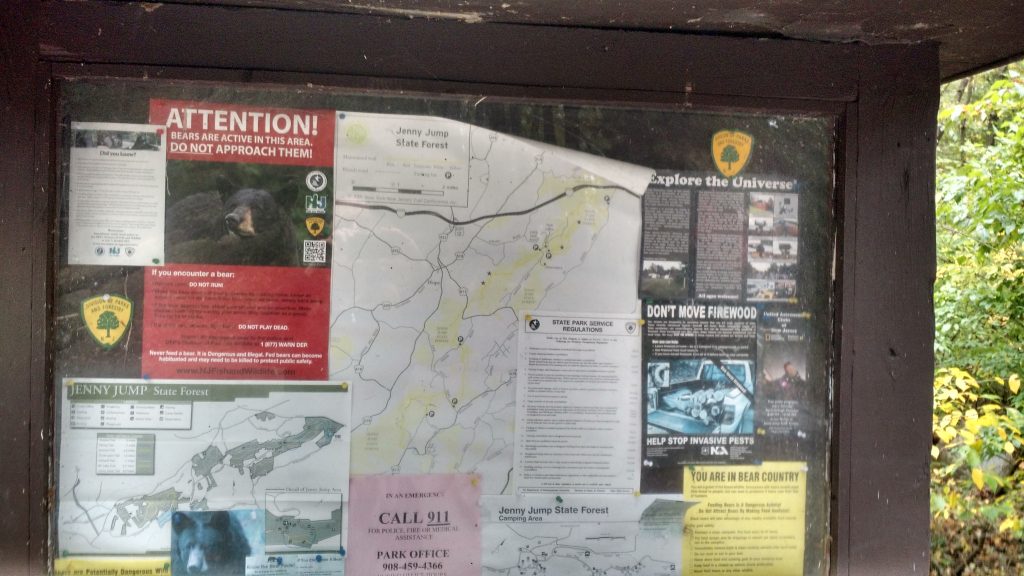 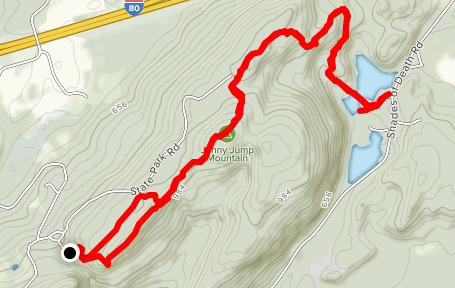 It had been quite a while since I was able to hit the trails, with time filled up with marching band and hockey season.  As we are nearing the end of hockey season, I found a weekend where we only had one game scheduled; which meant I was able to make an attempt at getting out and hiking.  What a day too, it started out sunny and upper 40s at 8:00.  I reached the trail by 9:45 and it warmed up to the lower 50s though clouded up as the day went on.  When I finished it was around 55, and the clouds had come in.  I took many more pictures than I’ve posted, but I’ve determined the potato I’m using is not taking the pictures it used to, so, on future trips I will be trying a new camera app.  We’ll see.  I apologize in advance.

Starting out on the Swamp trail was a great beginning; trails were wide, dirt-based, covered with leaves. 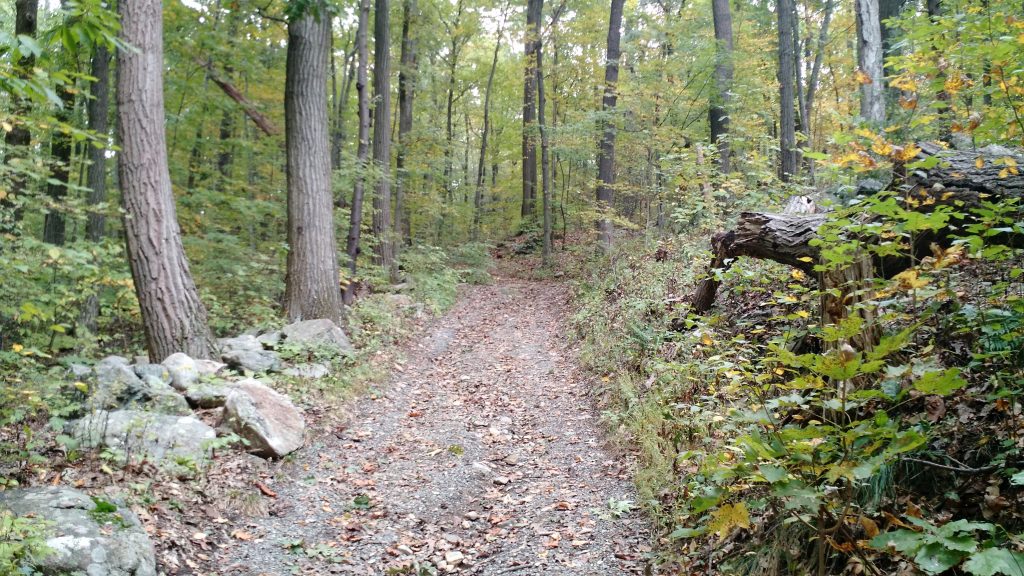 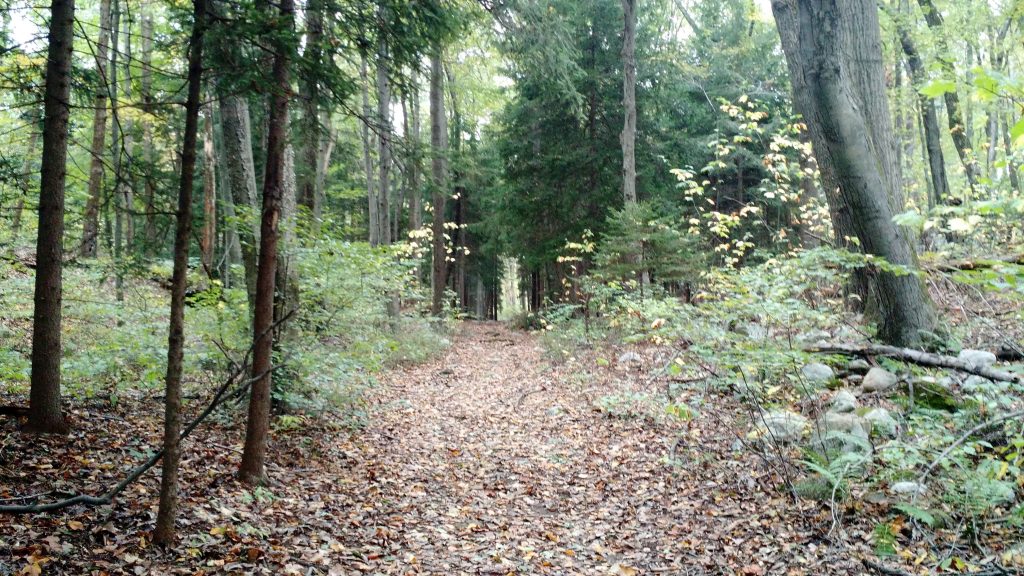 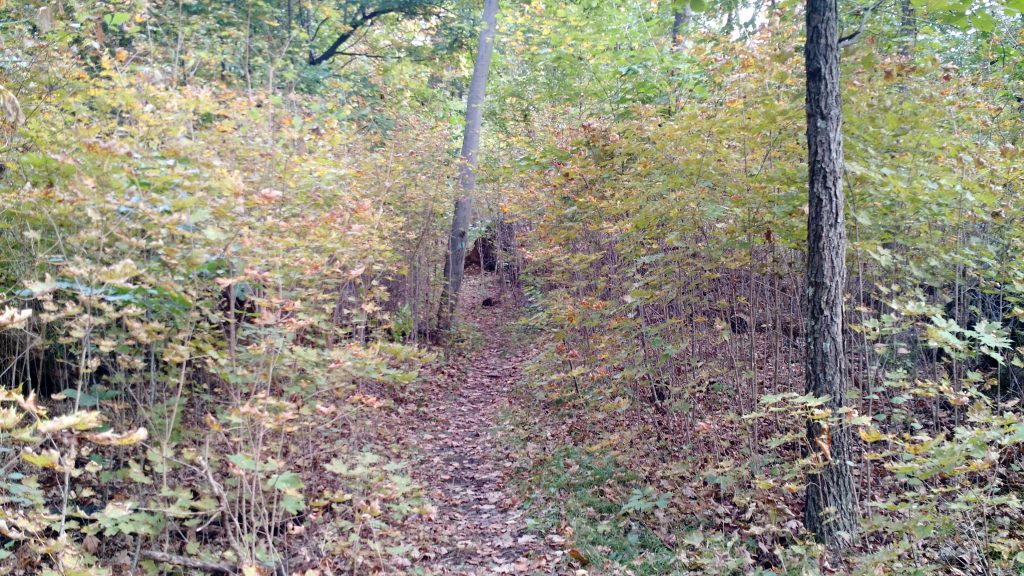 At the end of the Swamp Trail, I turned onto the Spring Trail; and that’s where things took a turn.  Minor rock scrambling was necessary to ascend to the ridge and up to Jenny Jump Mountain.  The trail changed to mostly rocks – what I am most used to in North Jersey.  Once up to the ridge I hiked along until I caught up with ten members of a hiking club.  I trailed behind them until the rested near the top of Jenny Jump Mountain and then I walked on by.  Make sure to bushwack to the overlooks, there are some great views of the mountains and fields in the distance.

Eventually, I started the long descent towards Ghost Lake.  Eventually, I turned onto the Ghost Lake trail which was wide, but had its fair share of rocks.  There are two sections with minor rock scrambling in order to get down – I wasn’t thinking about the return trip…I would have to climb UP this section later.  There were some neat plant-life in the area, massive boulders (moved by glaciers) and even a small stream that fell towards Ghost Lake. 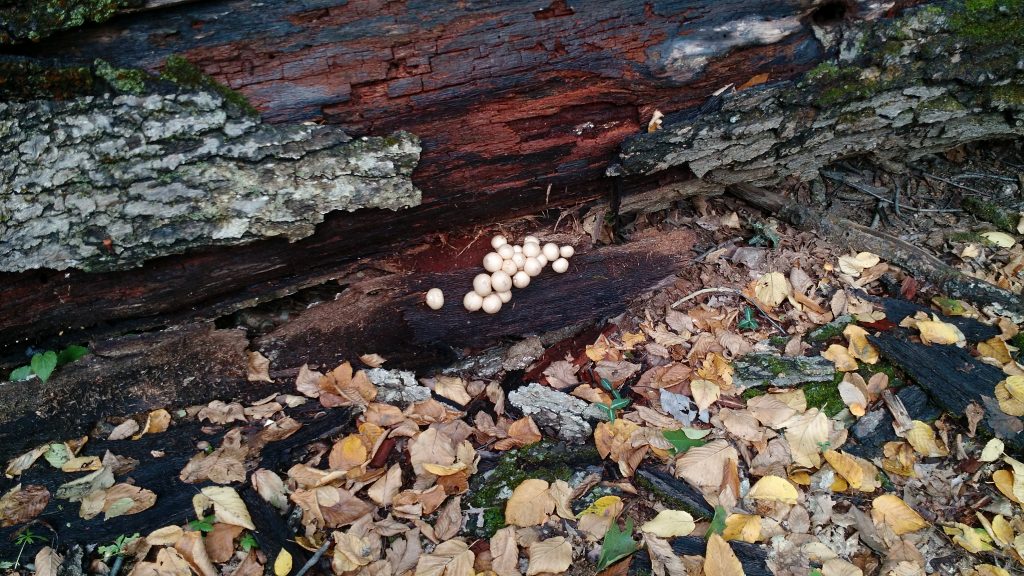 The boulder below is huge, and a tree had fallen from the incline on the right, landing on top of the boulder.  The trail winds UNDER the fallen tree. 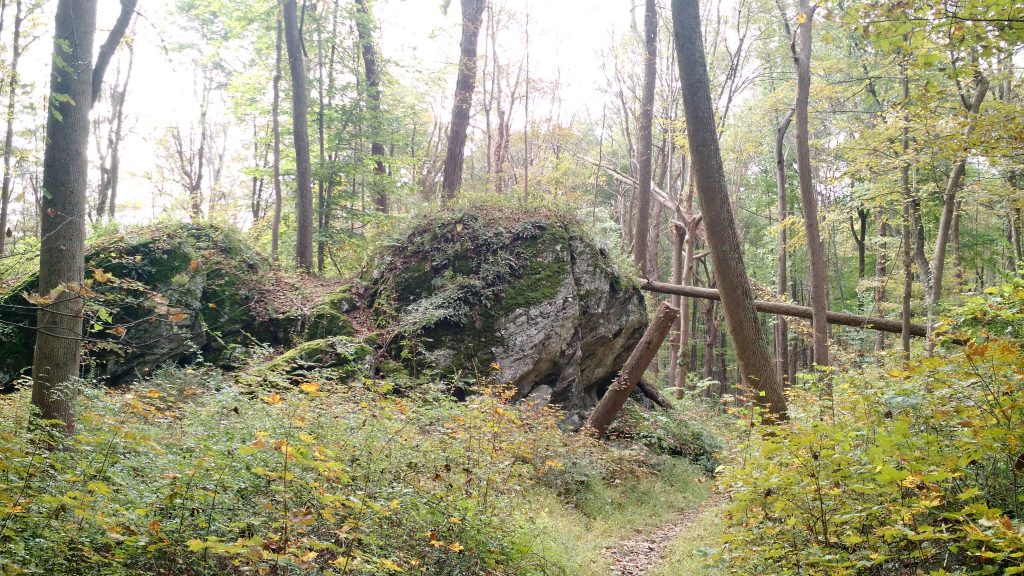 Eventually, I exited the forest and got to Ghost Lake. 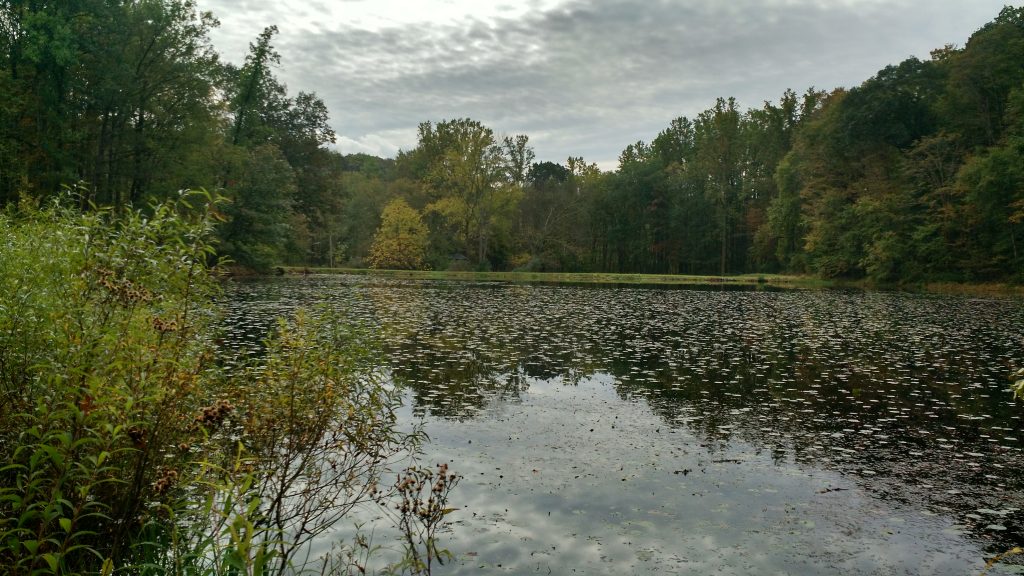 This was a great place to stop for a minute, eat, and grab something to drink. 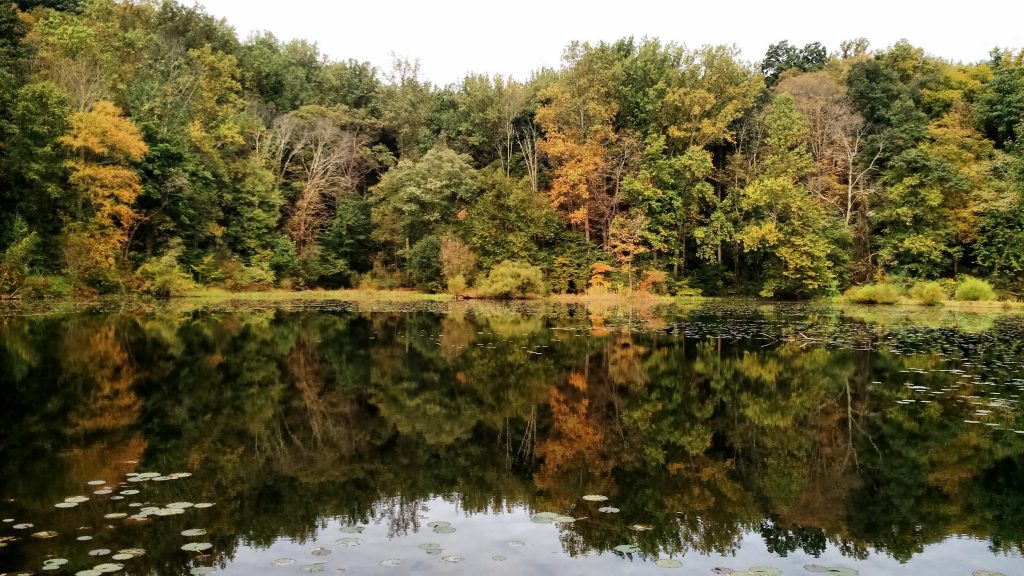 After resting for a minute, I thought I would look for the Fairy Hole, a cave by the side of Ghost Lake.  In using Google Maps, I realized the cave was on the other side of Ghost Lake, and really didn’t want to walk all the way around when I had a trip (uphill) all the way back.  Off I went.  (And on the way back into the forest, I ran into the hiking group I had passed earlier.  I think I saw “Garden State Hiking Club” on one gentleman’s jacket. Hello again, if you’re reading.) 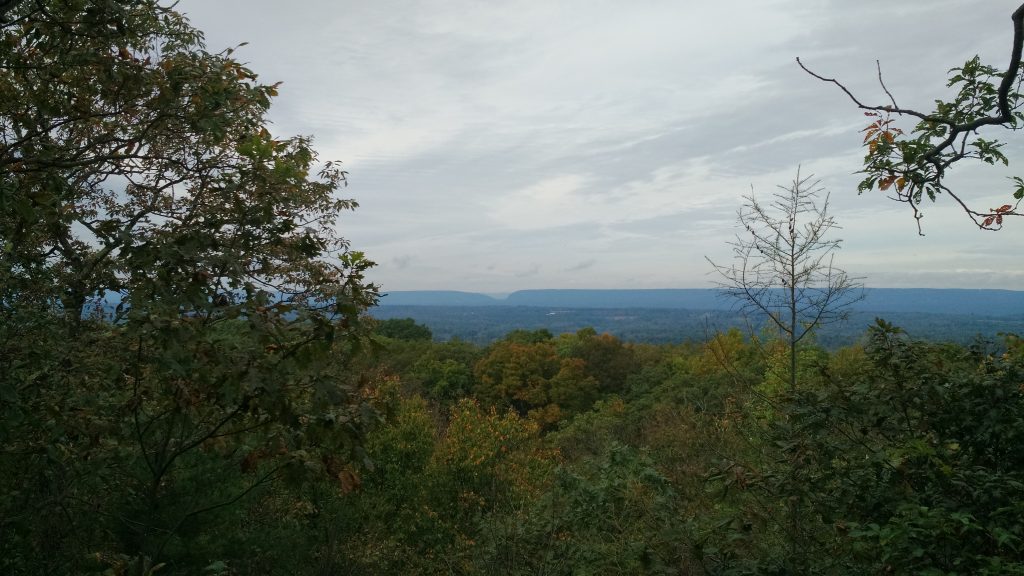 That’s the Delaware Water Gap in the distance…and it probably looks better on a) a less cloudy day, b) less leaves, and c) a better picture.  Continuing on, I was treated to more glacial erratics: 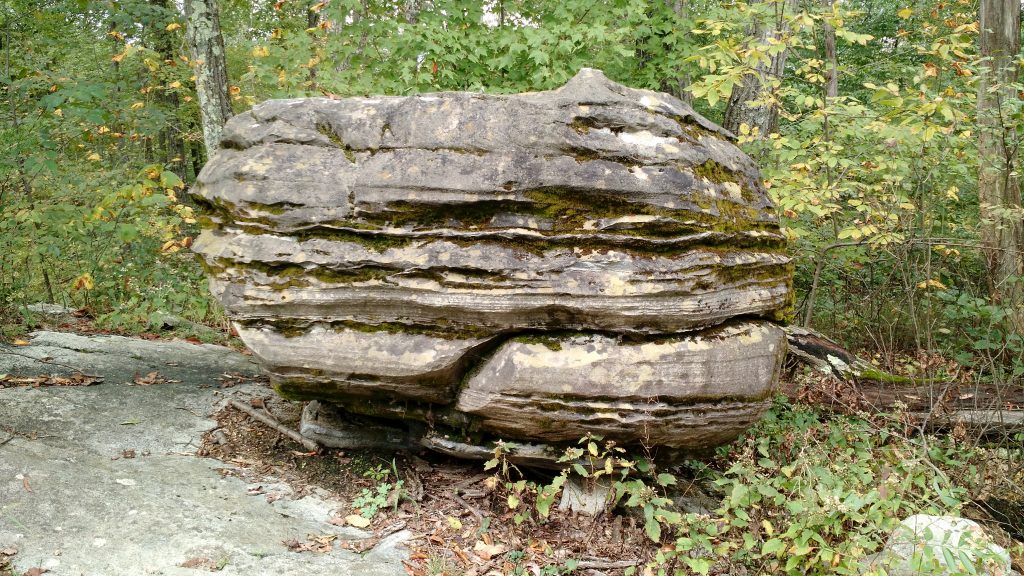 One last overlook had a great view of the fields: 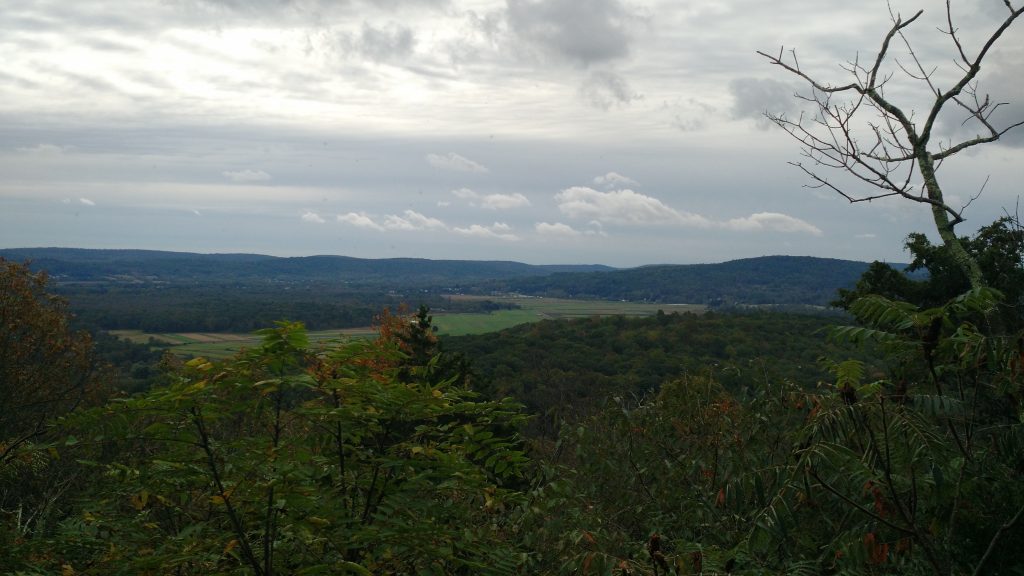 Trails were well marked; while I had the trail map in my bag, I really didn’t need it.  On this hike I happened across more people than I had seen on the trails in a while. Even though it had rained the day before, the trails were in great condition.  I passed a whole bunch of campsites and shelters, and on a future trip here I think I would want to stay in a shelter; it looked like fun.  There were lots of squirrels, and I think the chipmunk militia was following me again; I heard them frequently.  I was walking in bear country again, but did not see any.

I chose Jenny Jump as it will probably be my only hike before Halloween; and there are lots of myths about the forest.  Supposedly, a young girl jumped to her death off one of the large boulders near the top of Jenny Jump mountain, and her spirit wanders the park.  Ghost Lake is named due to a local native American burial ground, or the steam and mist that rises from the lake in the mornings.  And, as an avid Weird NJ reader, I was right near Shades of Death Road.  Of course, I had to drive down the road so I could say I did. 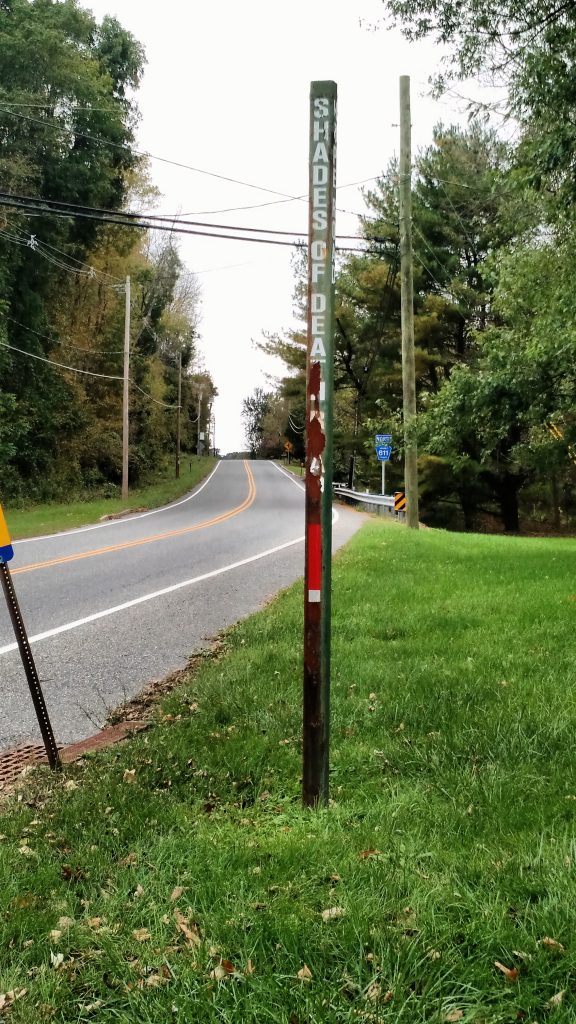 I’m happy to say I made it back with no issues stopping for both pumpkins and apple cider doughnuts at a roadside stand.  Unfortunately, I saw no ghosts, and no bears, but it was a great hike and a great day.

Ticks:  0  (Though we did find one on the dog the next day, it’s not confirmed where the tick came from.)