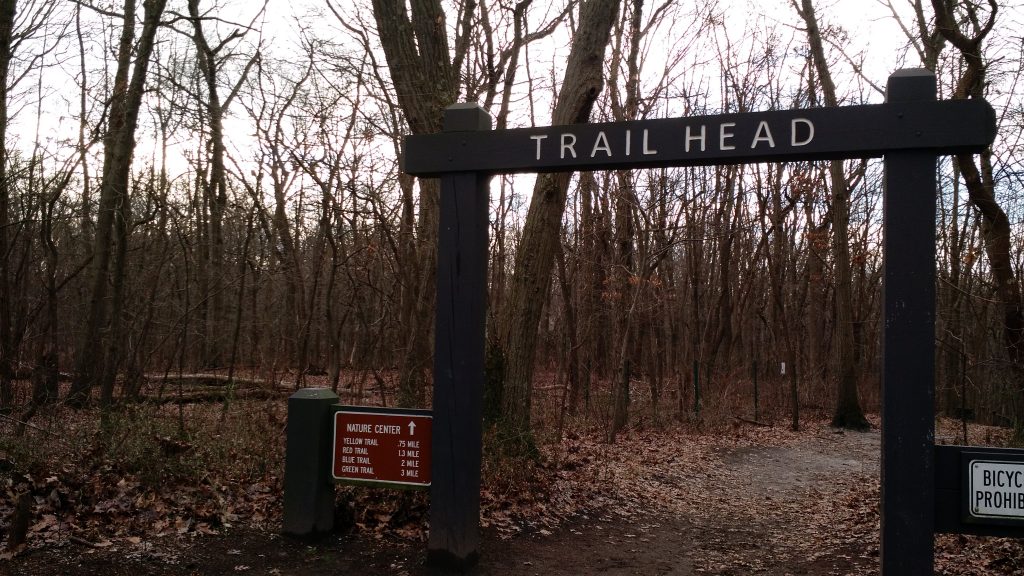 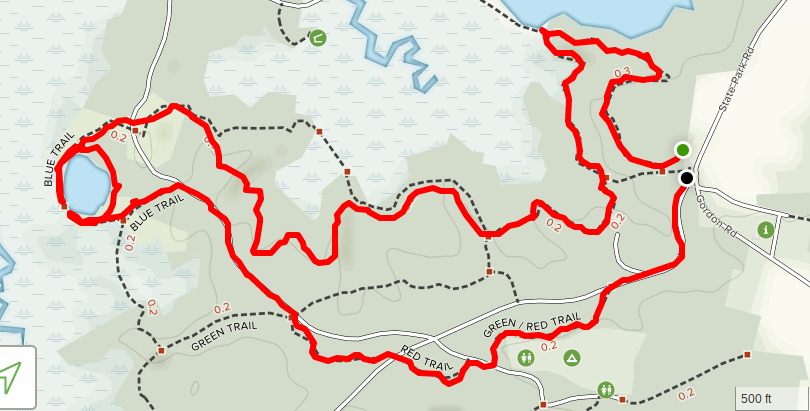 Saturday, December 29th was a warm day for December.  I had some time to kill in the afternoon and ended up at Cheesequake State Park to hike the Blue trail, which I had not hiked previously.  My original plans were to hike on Sunday, but I saw potential rain, and lower temperatures in the forecast.  I left my house around 1:00 p.m. so I knew I couldn’t do anything real long.  Temperatures were in the middle 50s, and it started out sunny, but became overcast as the afternoon wore on.

Driving to the parking lot, I came across this sign: 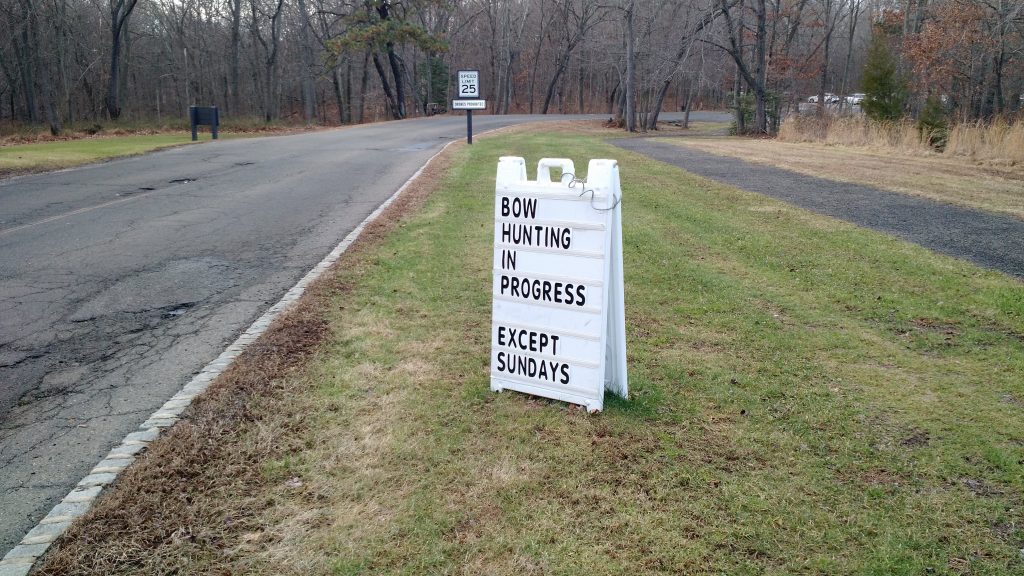 However, when I got to the lot, I discovered it packed.  And, throughout the afternoon I noticed the same thing, the trails were packed.  There were more people on the trails than I had probably seen on trails all year.  I get it, the last Saturday of the year, people had been together all week, mild temperatures, sun….definitely a great day to get out.  Fortunately, I neither saw or heard hunters.

I started out on the Yellow trail which I had hiked before, it’s rather short, and makes for a good warmup.  Without leaves on the trees, there were good views of Hooks Creek Lake. 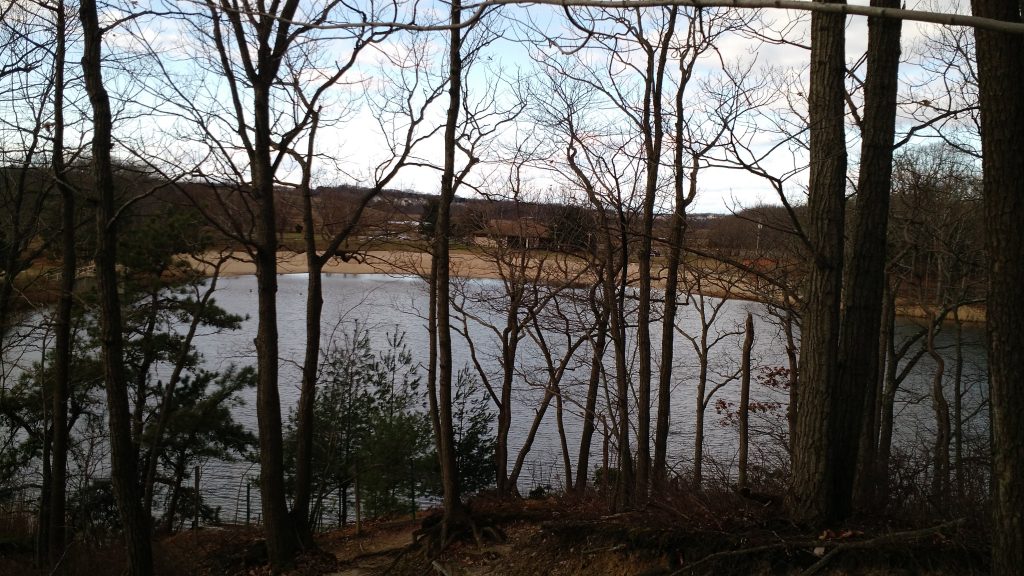 “They” say that 2018 has been one of the wettest years on record for our area.  There was rain on Friday, but for the most part trails were ok (except as noted below.)  However, creeks and streams were all gurgling. 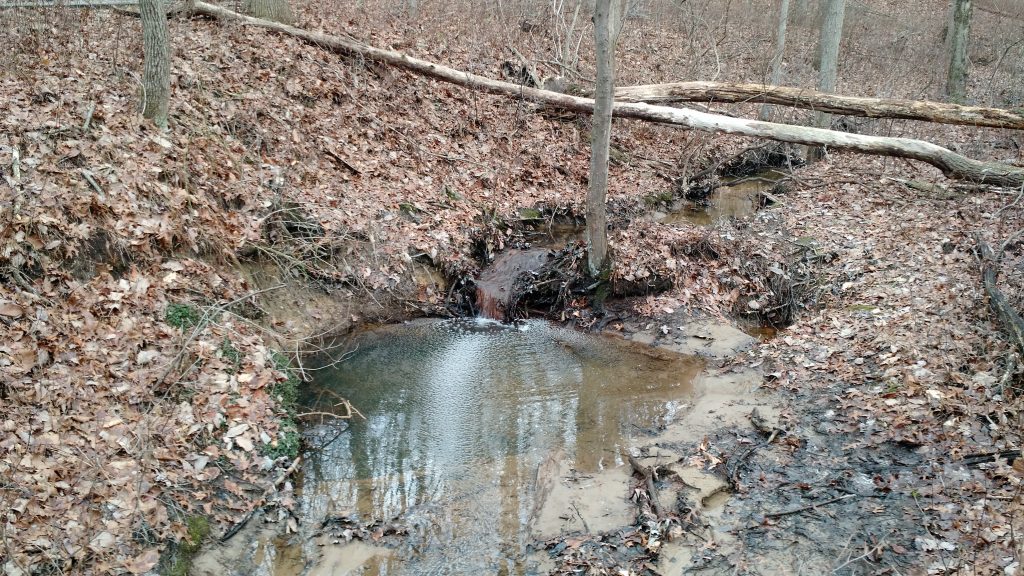 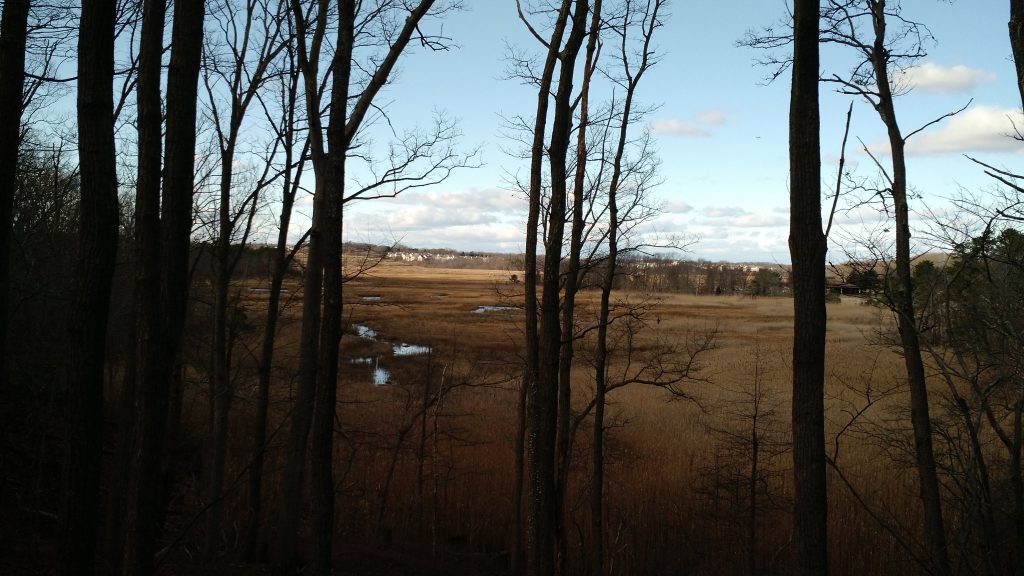 There were numerous spots along the trails where good-sized puddles existed, some puddles had deep water.  Many times there were enough rocks or roots that you could effectively hop across.  This would not be the case in the picture below, and little creative bushwhacking would be in order. 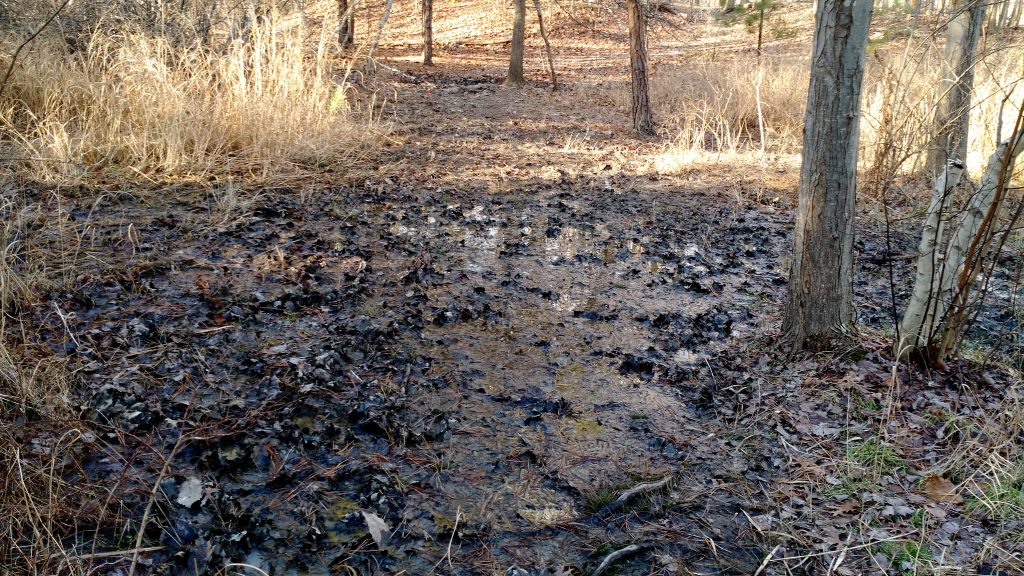 There was one place where you had to be careful, and that was coming down some of the hills.  Leaves had gathered near the roots of trees, and you had be careful stepping into them; as you didn’t know how deep the pile would be.  Only once did I almost stumble, probably before this picture as it is what prompted me to take the picture.  The picture doesn’t do the hill justice – not that they were real tall or steep, but the picture is taken looking downhill. 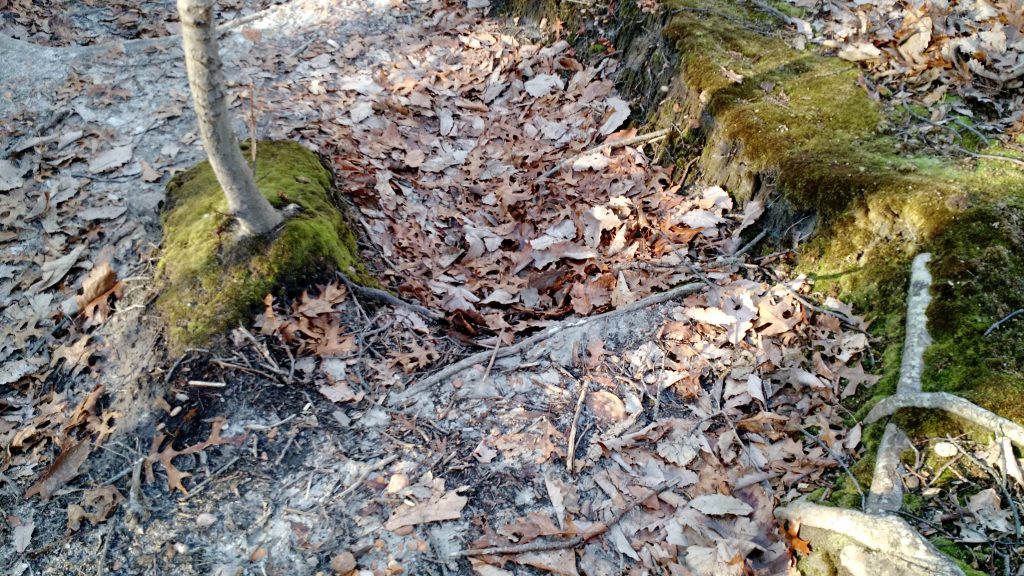 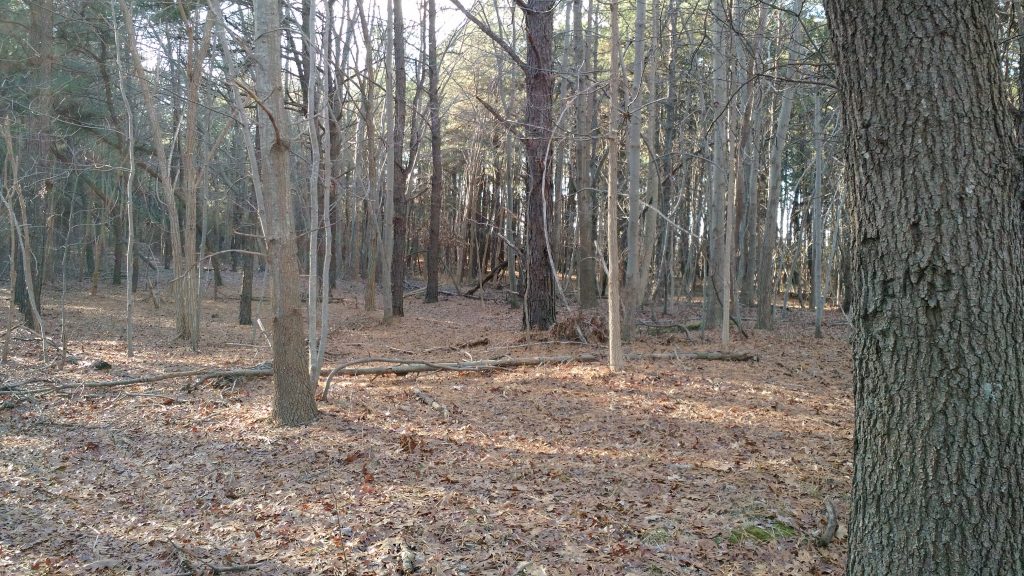 Walking through the woods was peaceful.  And, I was in an area of Cheesequake I had not hiked before.  The sun came out as I reached Perrine Pond, where I stopped to enjoy the sun.  I had a fleece on and it was perfect for the temperatures. 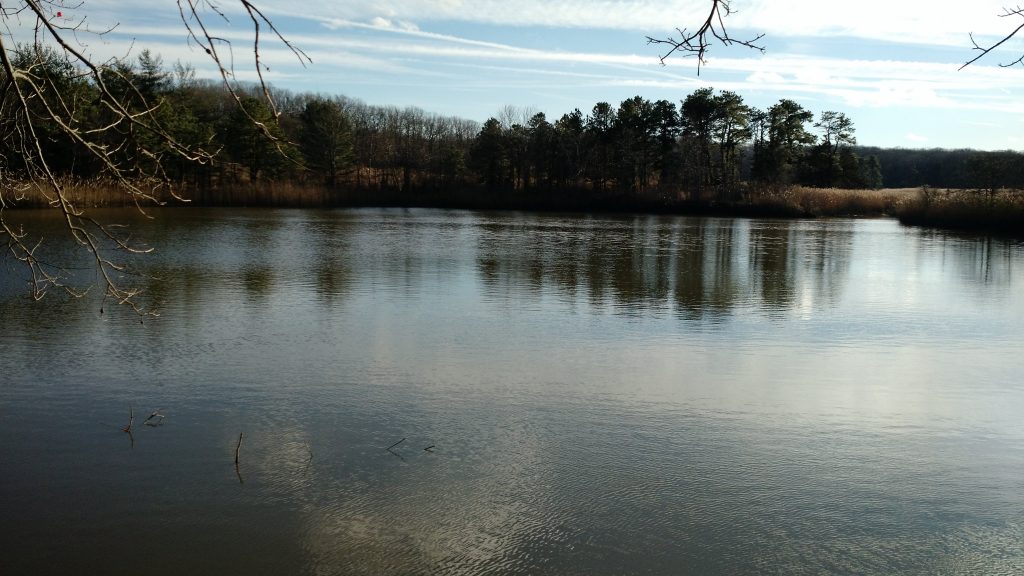 Here’s where it got a little tricky.  I had printed out an old(er) map of Cheesequake (one I used on a previous hike) and was following Blue around the pond.  When, all of a sudden: 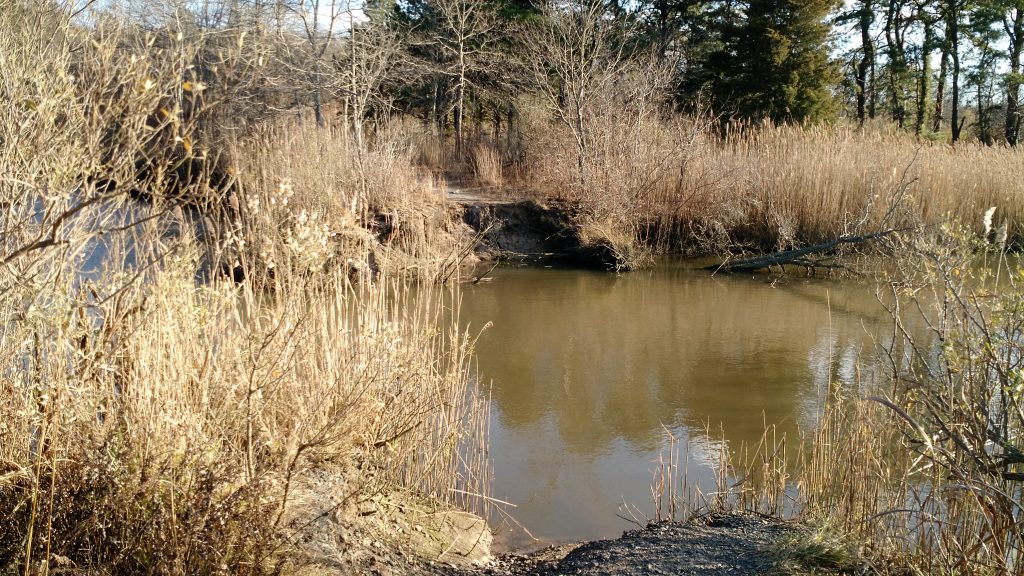 I was not attempting to ford that.  Retracing my steps, I came to where the previous picture of Perrine Pond was taking.  At the waterfowl blind, I realized the trail went left.  More signs noting that turn would be helpful.  And, removing the signs on Blue to where the trail stops would be helpful as well.  Although, along that route was an osprey nest and nice views of the marshland.  Worth the extra walk.

No real problem, I followed Blue around the near edge of the pond, found where it met up with the “old” trail, then followed the old trail to see the other side of where it ended: 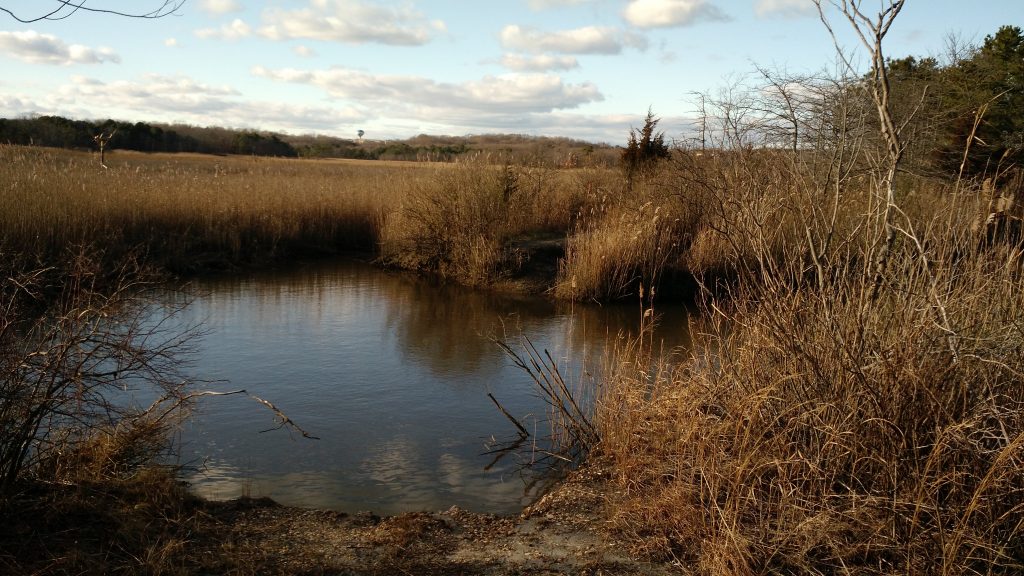 This is why, if you look at my AllTrails trail map, above; you will notice I almost completely encircle Perrine Pond.  In the map that I link to, the trail is correctly annotated.

I followed Blue until I came upon the “Great Junction” of Blue, Green, and Red.  I have hike Green in the past, noticed that Blue follows Perrine Road back to the parking lot, so called an audible and walked on Red.  Red sort of paralleled the road, then met up with Green, and was familiar at this point.

All in all it was a great hike and I was pleased to get out.  While the trails were crowded there were still plenty of spots of solitude and silence.  I saw the usual squirrel militia, no dear, and a couple of hawks.