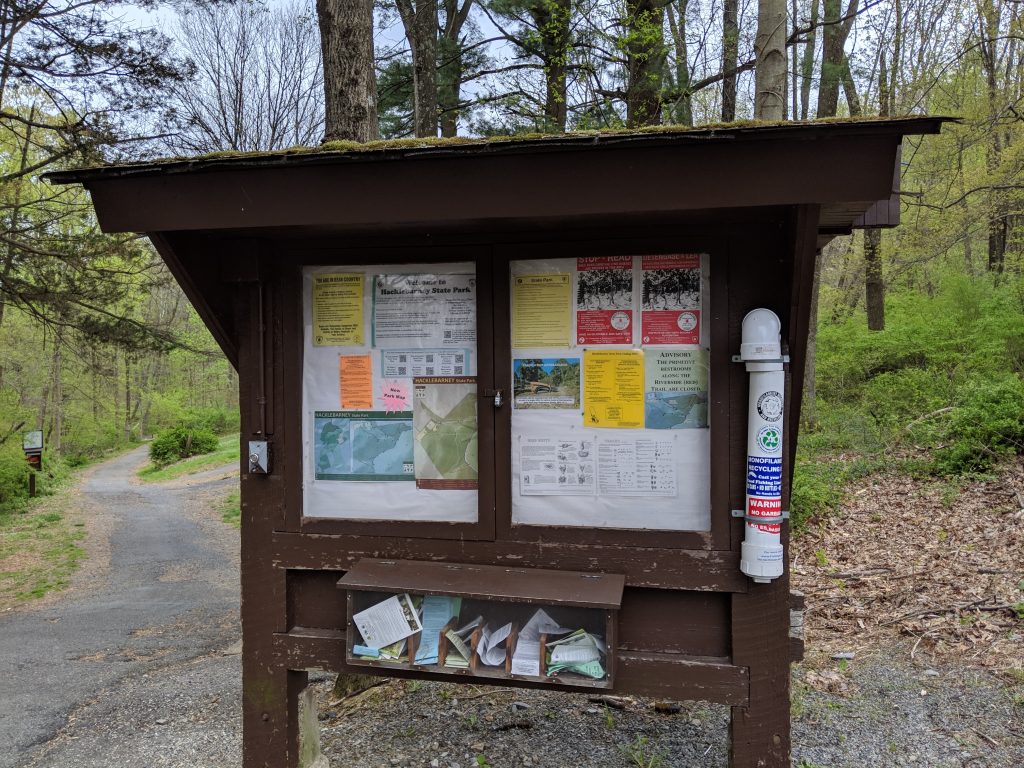 Trail Map – (as you can see by the picture above, the kiosk was a mess when I arrived around 9 in the morning.  Fortunately, I had a printout of the trail map.  When I finished the hike and returned by this kiosk, park rangers were neatening and restocking the maps.) 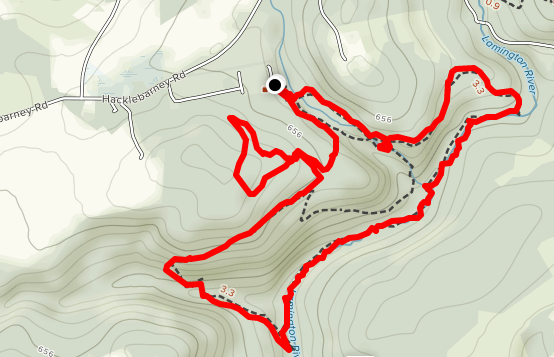 When I left the house in the morning there was bright sun.  Upon getting to Hacklebarney State Park it was cloudy and hovering around 51 degrees.  The forecast called for 60% chance of rain, but I wasn’t letting a chance of rain deter my first hike of the year.  I should probably pay more attention to forecasts, at least this wasn’t as bad as the Jockey Hollow hike last year.

I hiked my route counter-clockwise, when looking at the map, which started me on the Riverside trail.  This trail starts off on a pseudo paved trail until it descends to the river.  I noticed lots and lots of picnic tables and each table had a charcoal grill by it.  Some of the tables by the water are pretty far from the lot, I’m wondering how many people schlep picnics that far.  Also, I noticed numerous water fountains – none in operation.  Note:  on this day, the only restrooms open were at the trailhead.  Both of the other restrooms were closed.

Heading off the Main trail, onto Riverside: 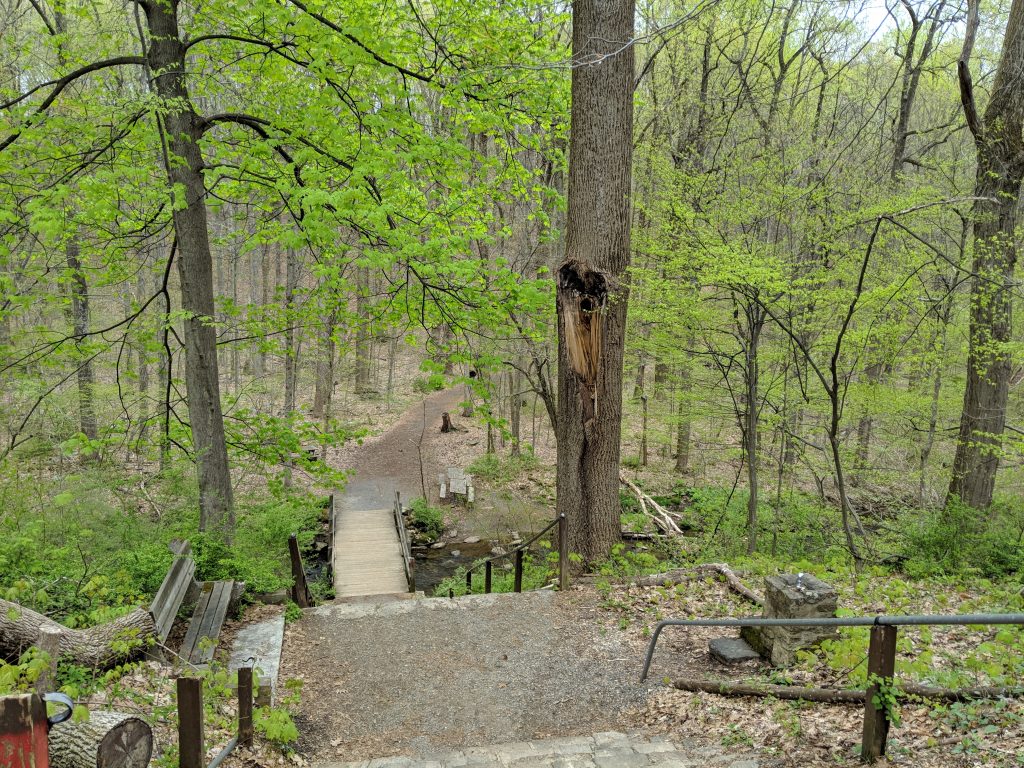 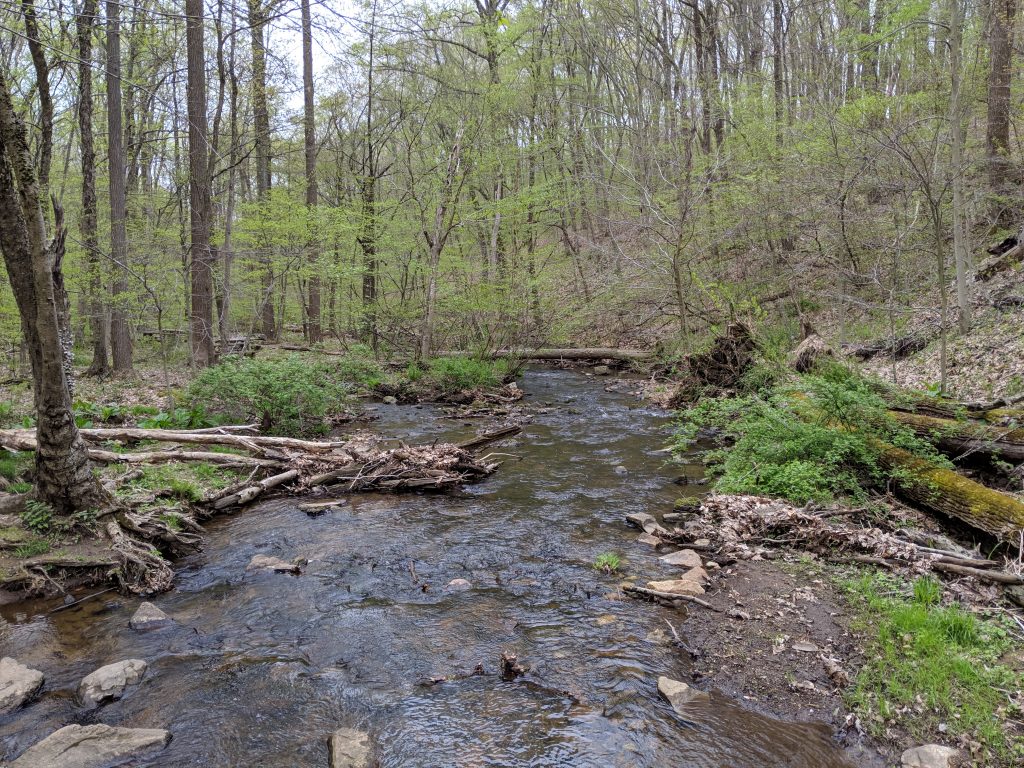 I really liked this portion of the trail (despite the pavement) due to walking by the brook.  It’s pretty loud and can be heard from a good distance.

Spring is trying to come forth (even though it was 51 when I took this picture.) 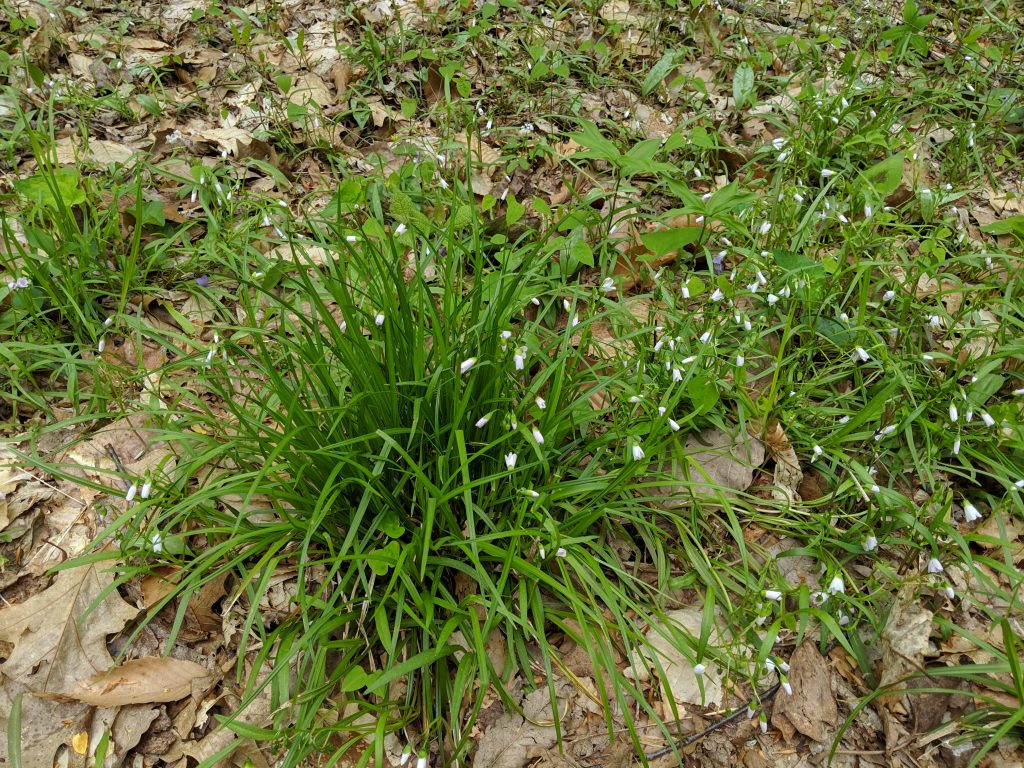 Before reaching the Black River, there is a little rock scramble down to Trout Brook to see the falls. 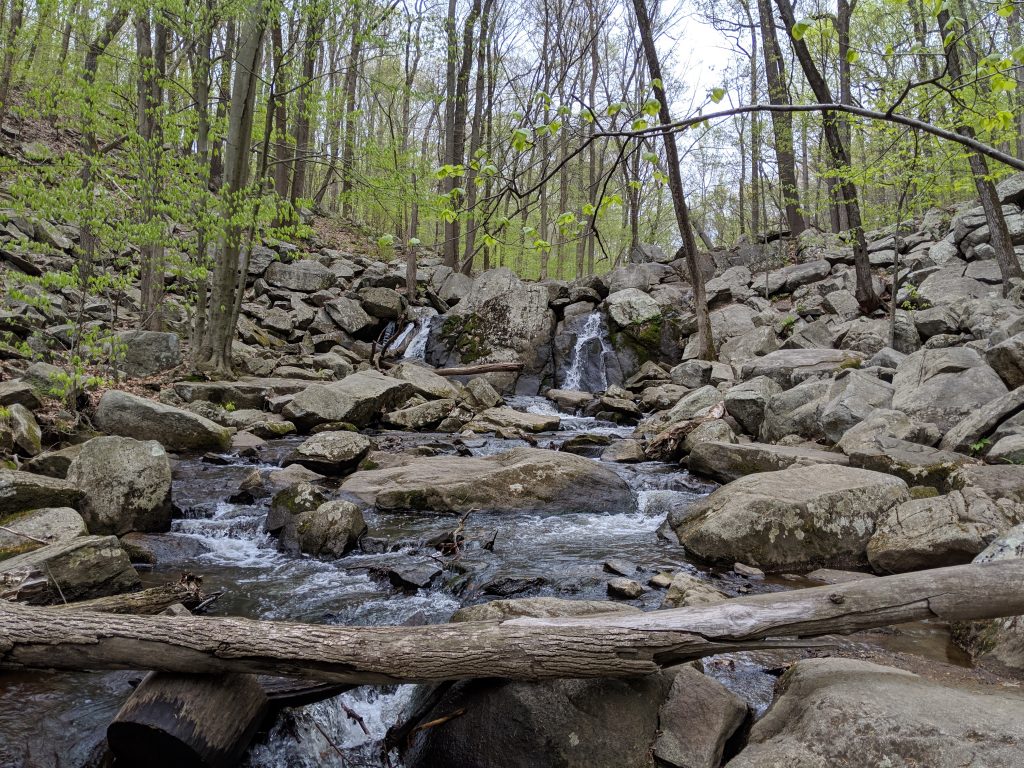 You really get a sense of the trail surface from this next picture.  And yes, you had to squeeze through the fallen trees to continue. 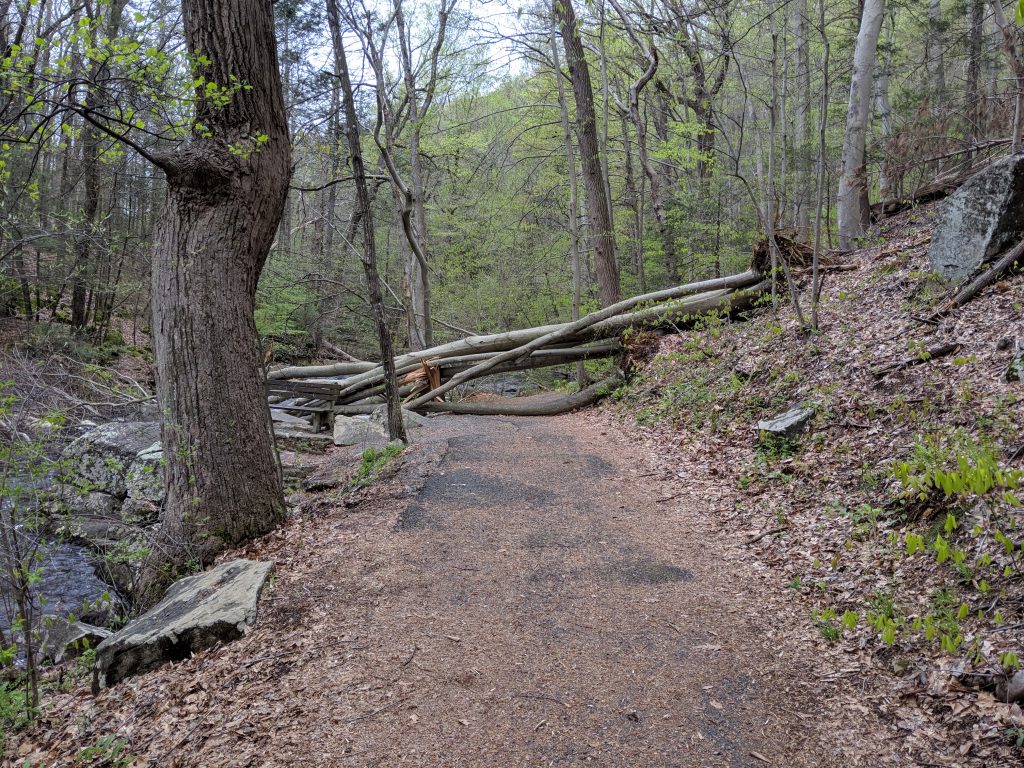 For 90% of the hike, I noticed many many downed trees.  (The one above was recent.)  Upon coming to a sign at the end of the hike, I learned that most of the trees fell during Sandy.  And, the sign continued, there was work ongoing (though not today) to clear dead trees such that invasive species did not take the spots of the fallen trees.  Interesting.

The Black River was great to hike along. 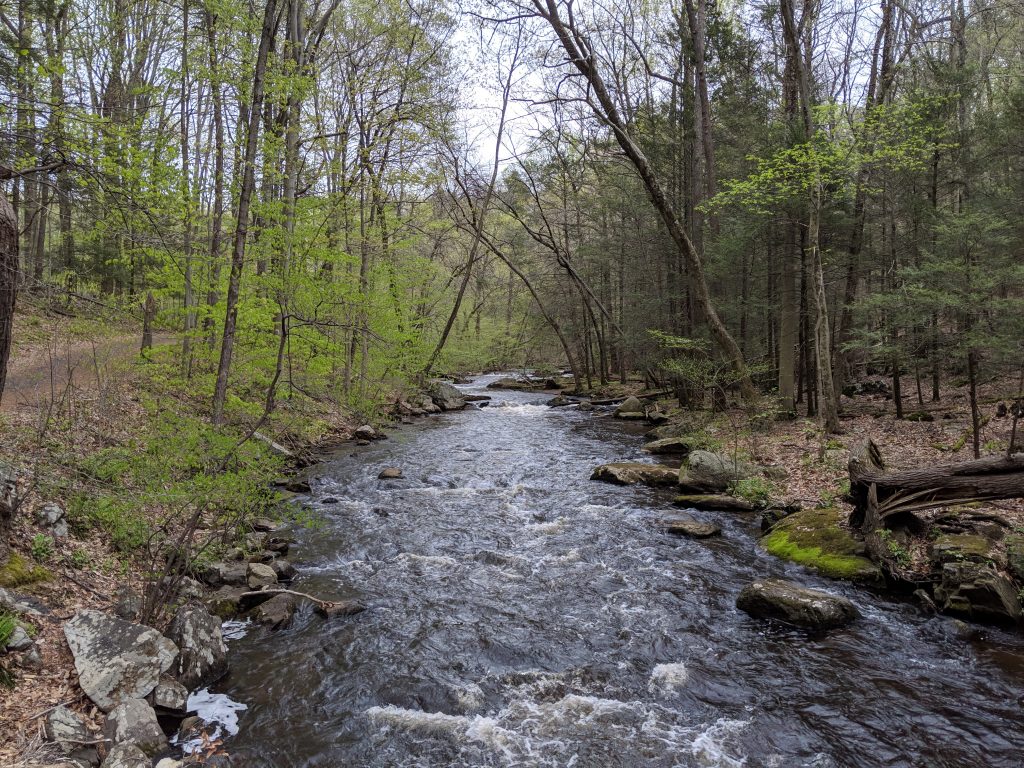 That would be it for the paved trails though until I climbed back up closer to the parking lot.  Along the Black River the Riverside Trail became a rock scramble, a bit more strenuous than the pavement. 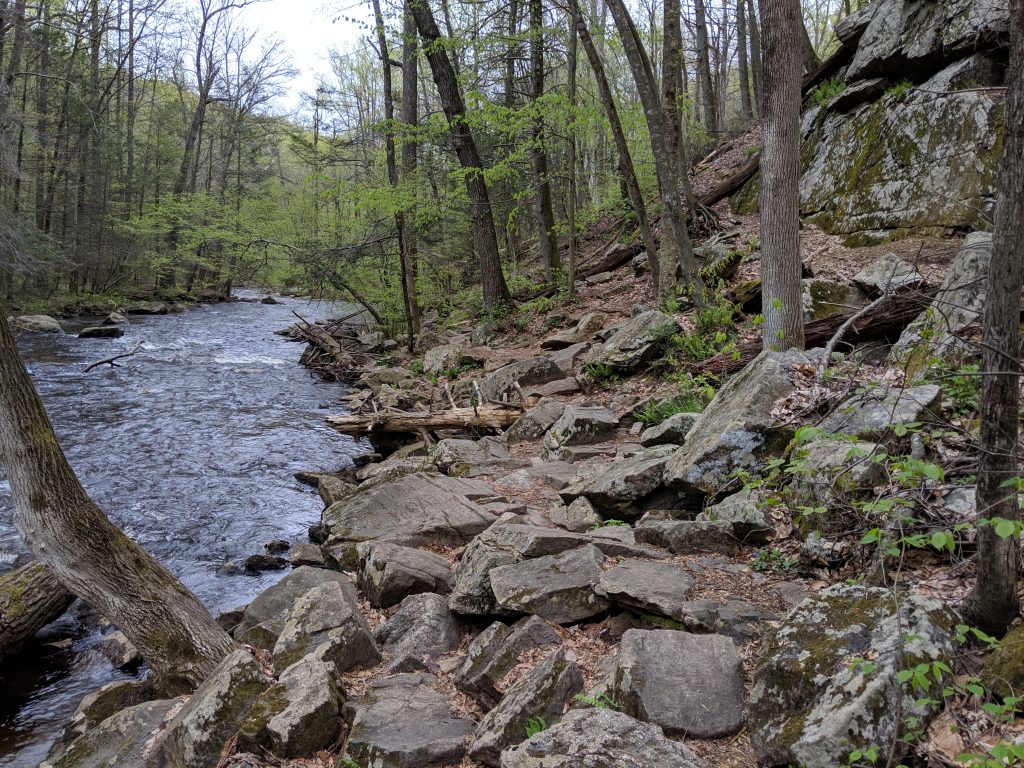 It was like that for almost a mile.  Today, while hiking this stretch, I noticed many fishermen along both banks.  Apparently, there is good trout fishing in the Black River – which was stocked on Friday. 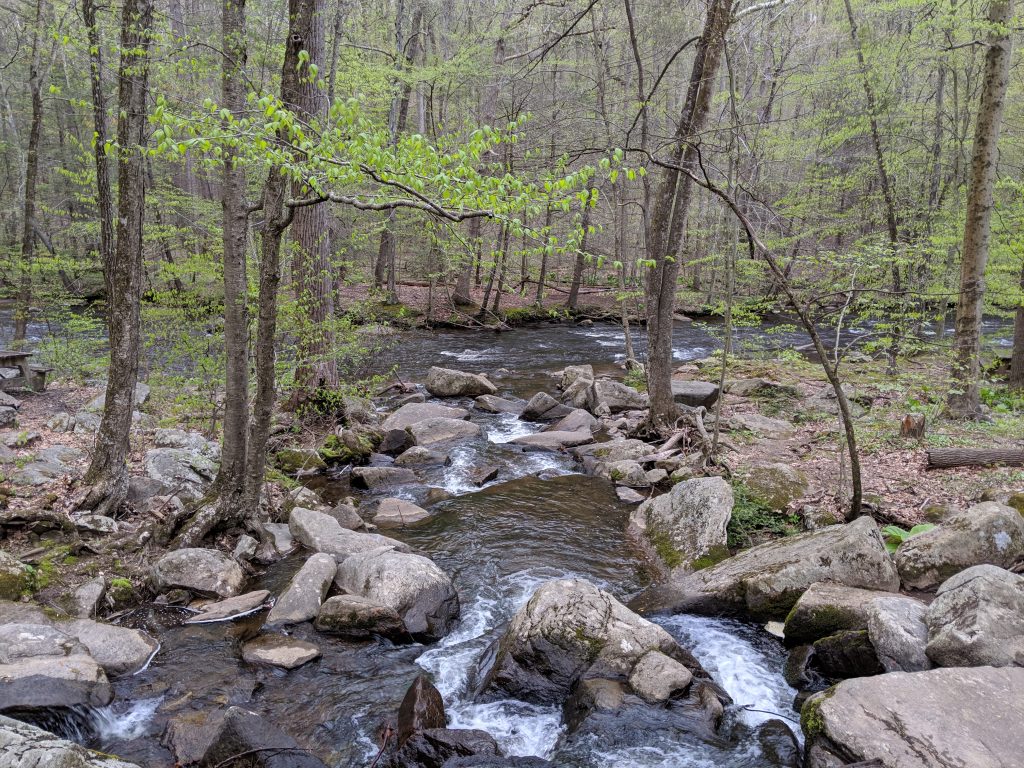 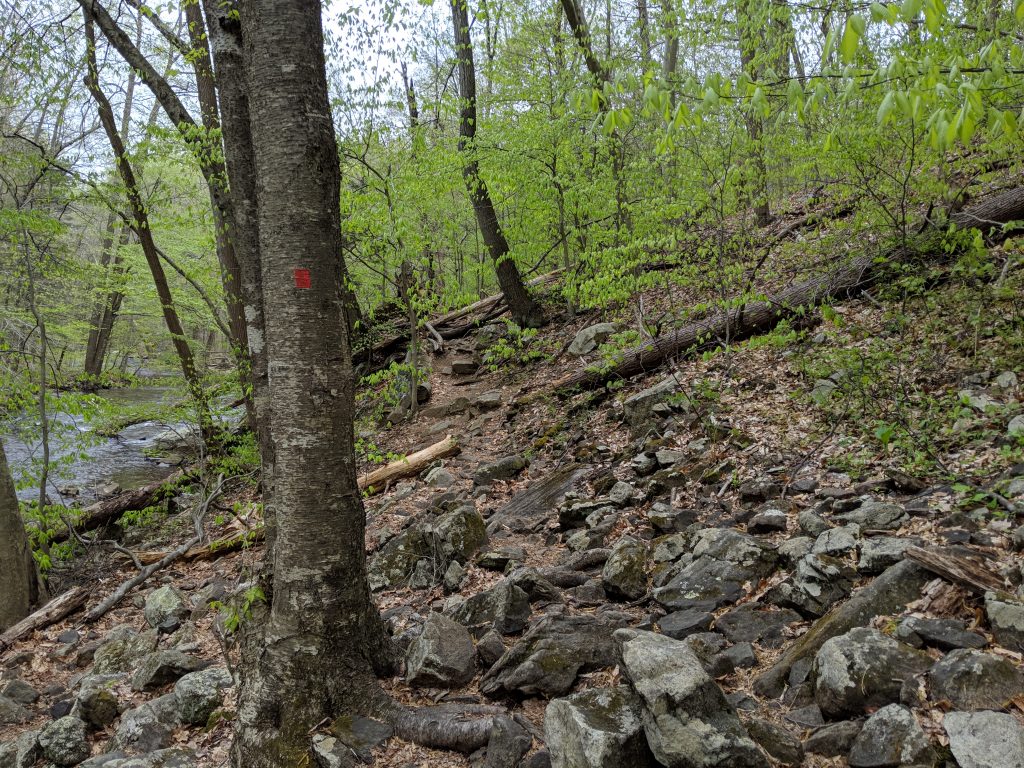 A little further along I came to Rhinehart Brook which was smaller than Trout Brook.  I could see cascades up the brook. 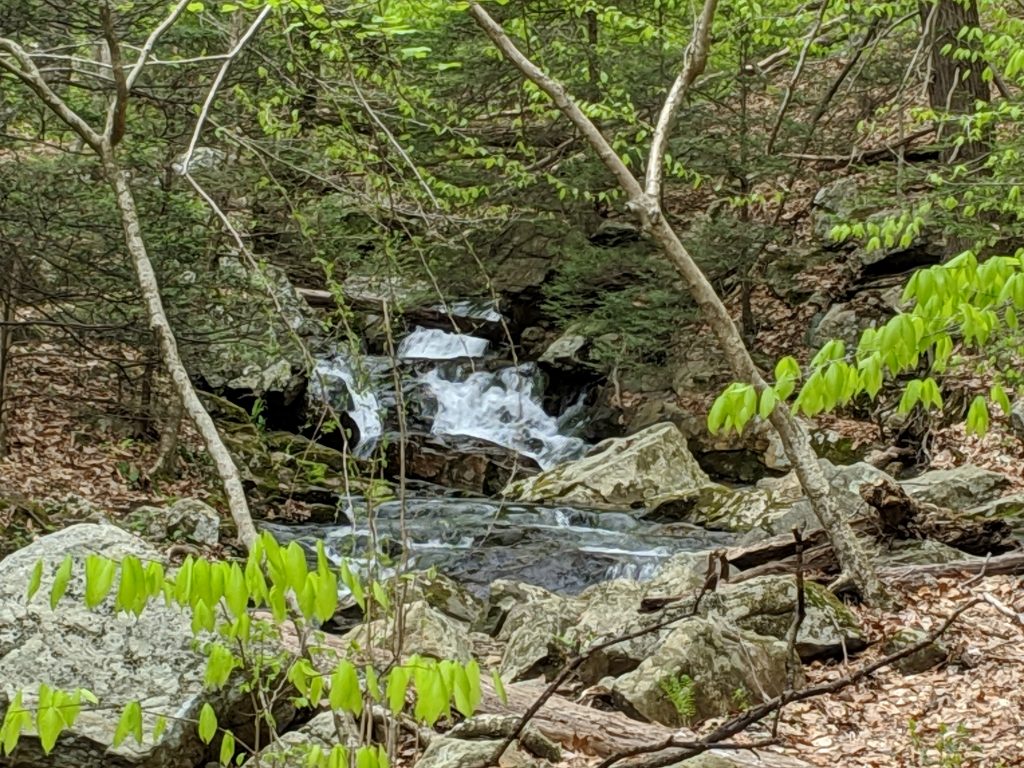 And here is where Rhinehard Brook joins the Black River. 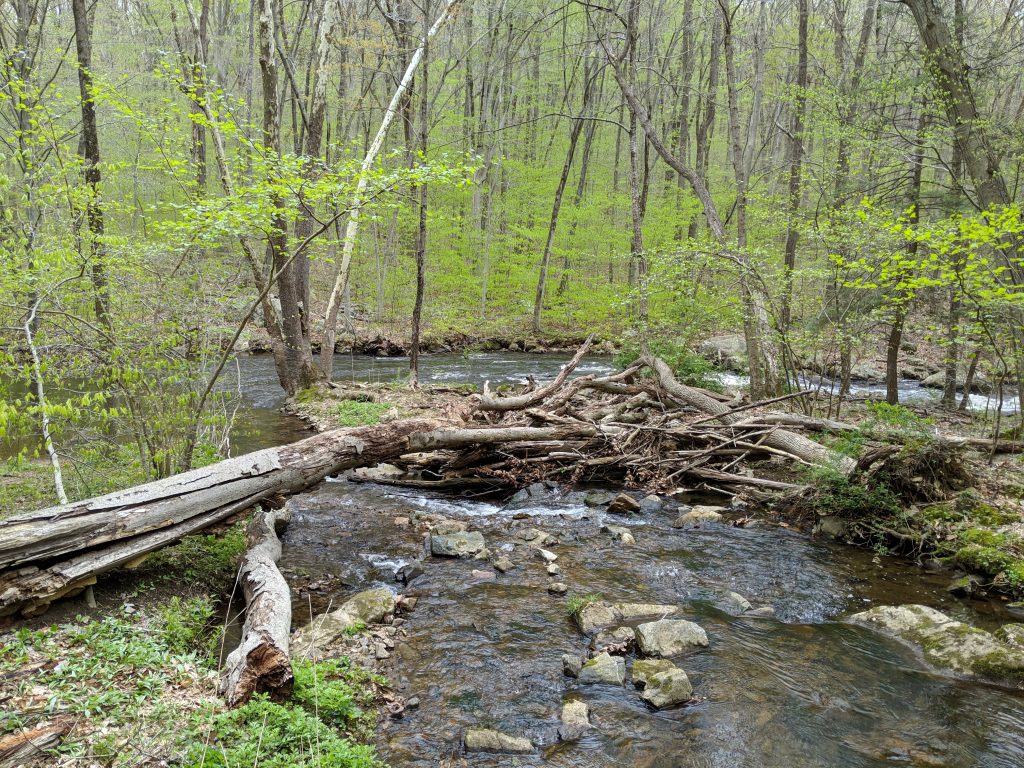 At this point I noticed it was starting to rain.  Fortunately, leaves were sprouting from the trees, and not much rainfall was reaching the forest floor.  I could hear it though.

At the southern end of the park were two pillars marking the park boundary.  If you kept walking past the pillars you entered land belonging to the Black River Fish and Game Club.  It is adequately marked.  I walked far enough to take this picture. 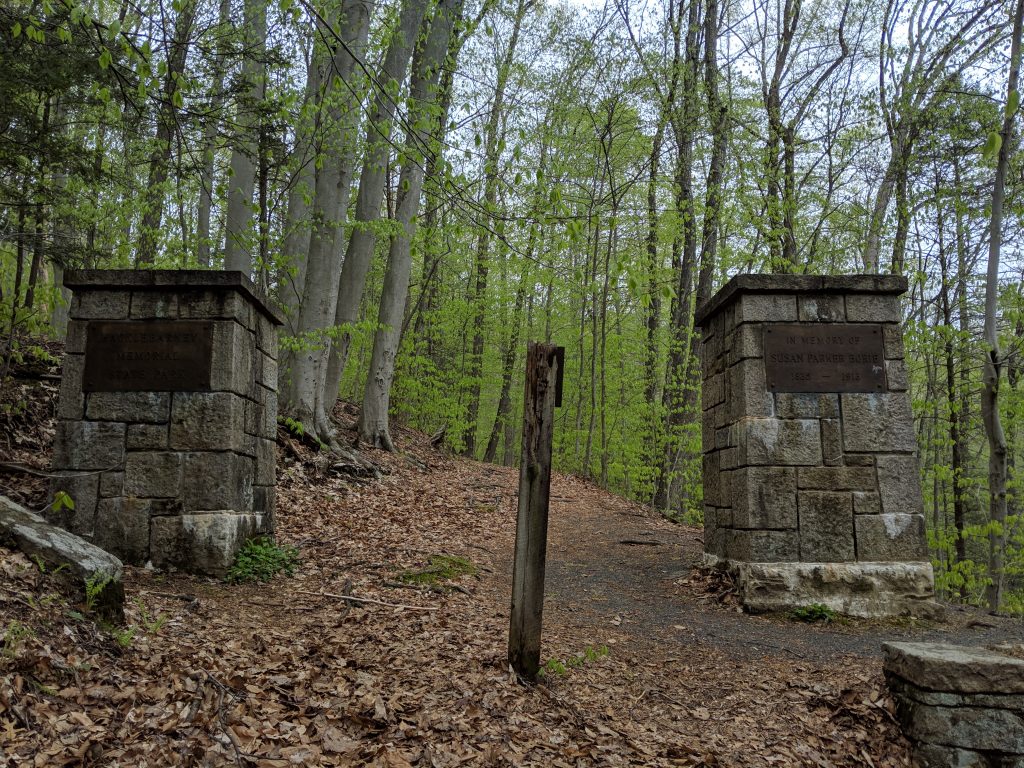 From here I took the Riverside Trail until it crossed Rhinehart Brook and I joined the Windy Ridge Trail.  While shorter, there was a steep section that started the climb back.  I hiked the trail to its junction with the Main Trail.  Here, I detoured on to the green trail heading towards the Upland Trail, by a playground.  I had read on other blogs that there was an observation tower. 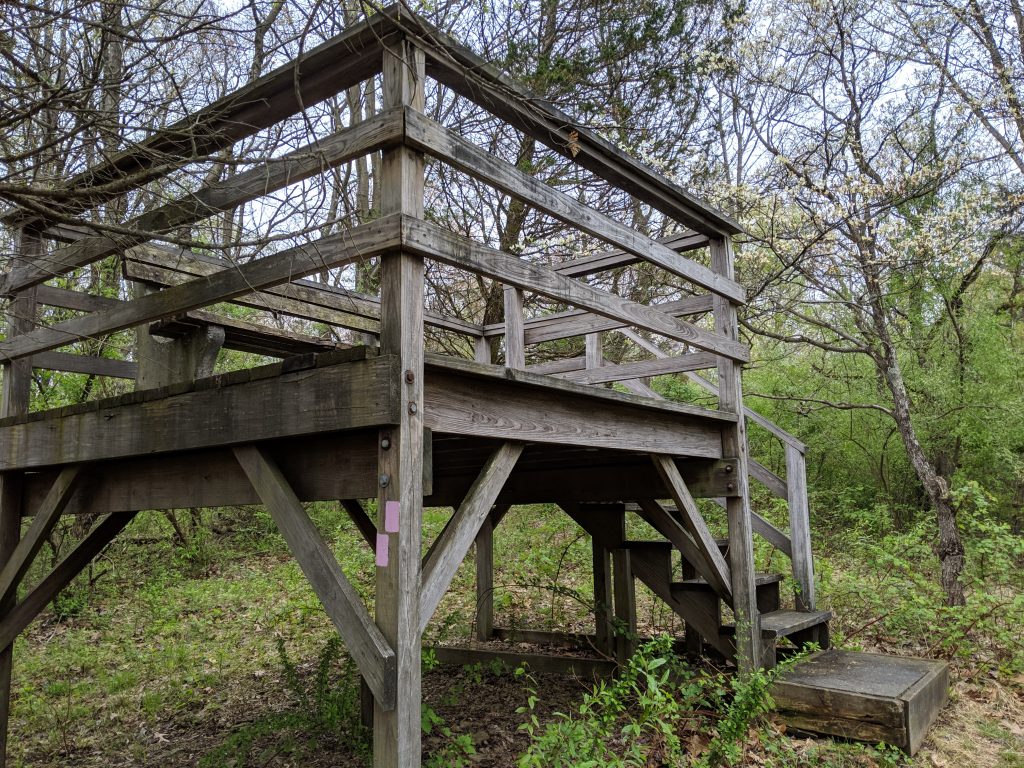 And what could you see? 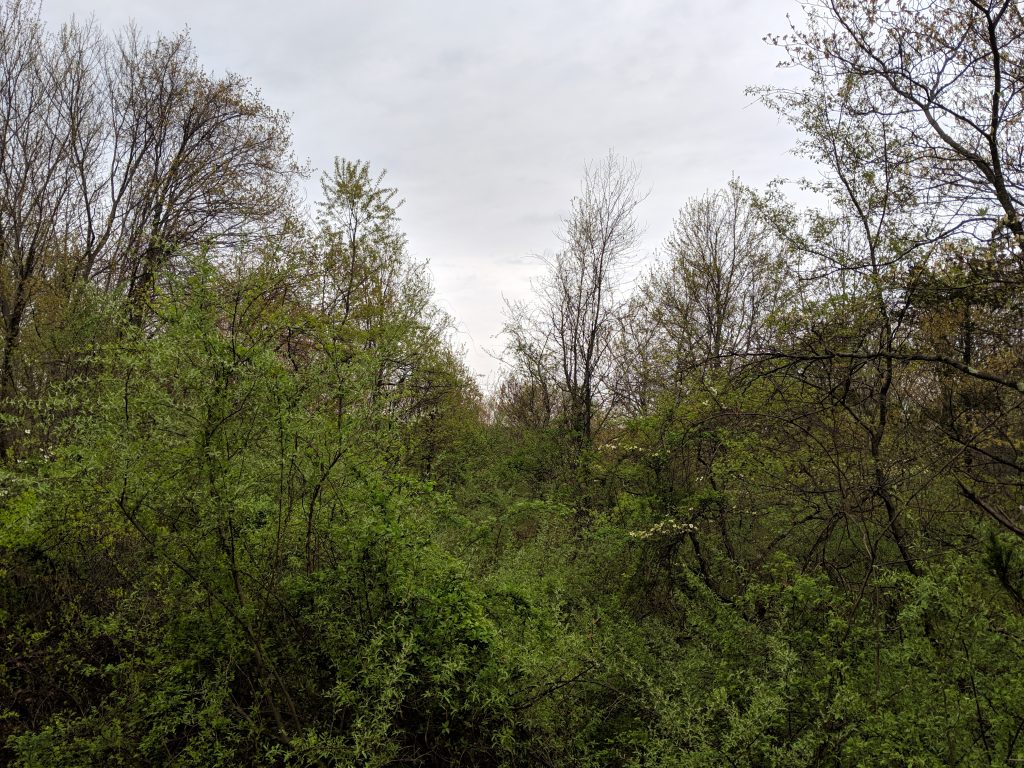 I doubt if the overcast hid anything.  I wasn’t sure what the tower was actually pointed at.  Anyway, it was back on the Upland Trail heading back to the Main Trail that I would take to the parking lot.

I heard a rustle, and realizing I was in bear country, I scanned around. 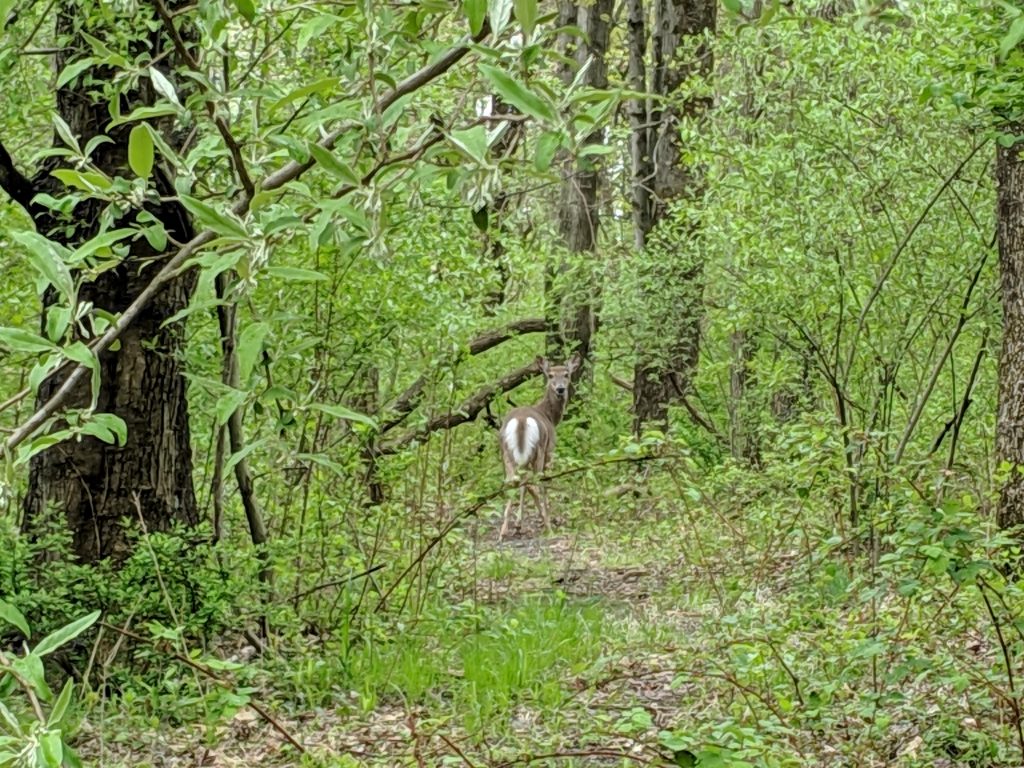 Later on Upland Trail, up in some trees 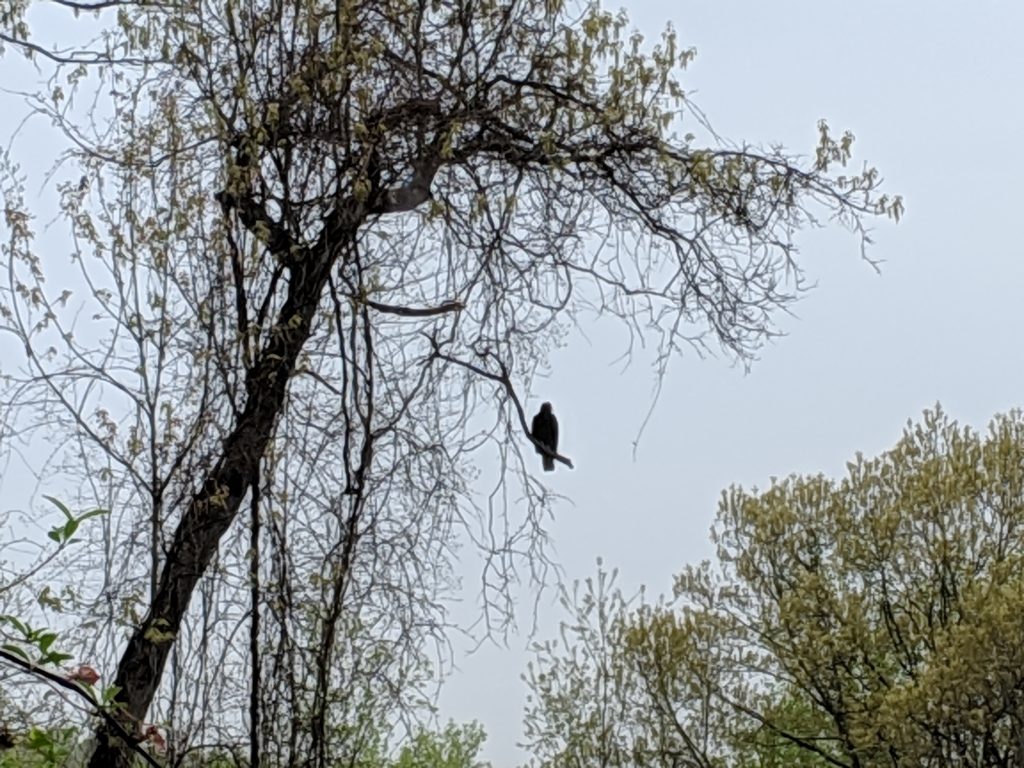 This was a great hike, despite the light rain that fell at the end and the paved portions of trails.  If the whole thing had been paved I would have been disappointed.  But the sections along Trout Brook and the Black River were awesome.  I am definitely coming back on a sunny day, and possibly in the fall to see the colors.  I suspect it will be much more crowded, but I think it will be worth it.  Trails were well marked and easy to follow.