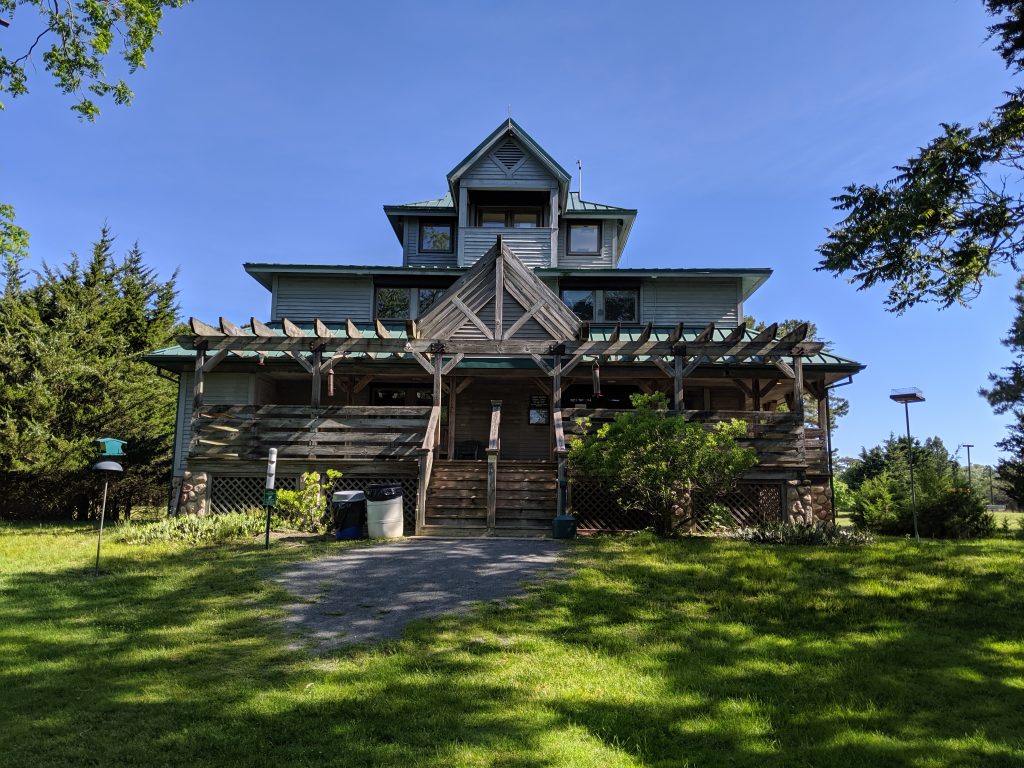 (Sorry, no picture of the trail kiosk, it looked like they were building a new one out in the parking lot. A picture of the nature center (closed) will have to do.)

Trails – White (Some discrepancy here.  Signage in the park called this the Penns Hill Trail.  The map linked to the site calls it the Macri Trail.  Either way, I hiked white.)

I left home nice and early and had a good ride down to Wells Mills park.  I  knew this would be a longer hike, with good weather for once, and I knew it would take me longer.  For Memorial Day weekend, I wanted to beat any traffic.

It was gorgeous out, 75 and sunny.  Unfortunately, the Nature Center was closed due to the holiday, but there were still trail maps in the container up on the porch.  There were also a ton of carpenter bees buzzing all over the place; not a nuisance, but all over the place.  As there was no kiosk, I used the nature center as the starting point.  I went right, on the trail, and immediately entered woods, close to Wells Mills Lake. 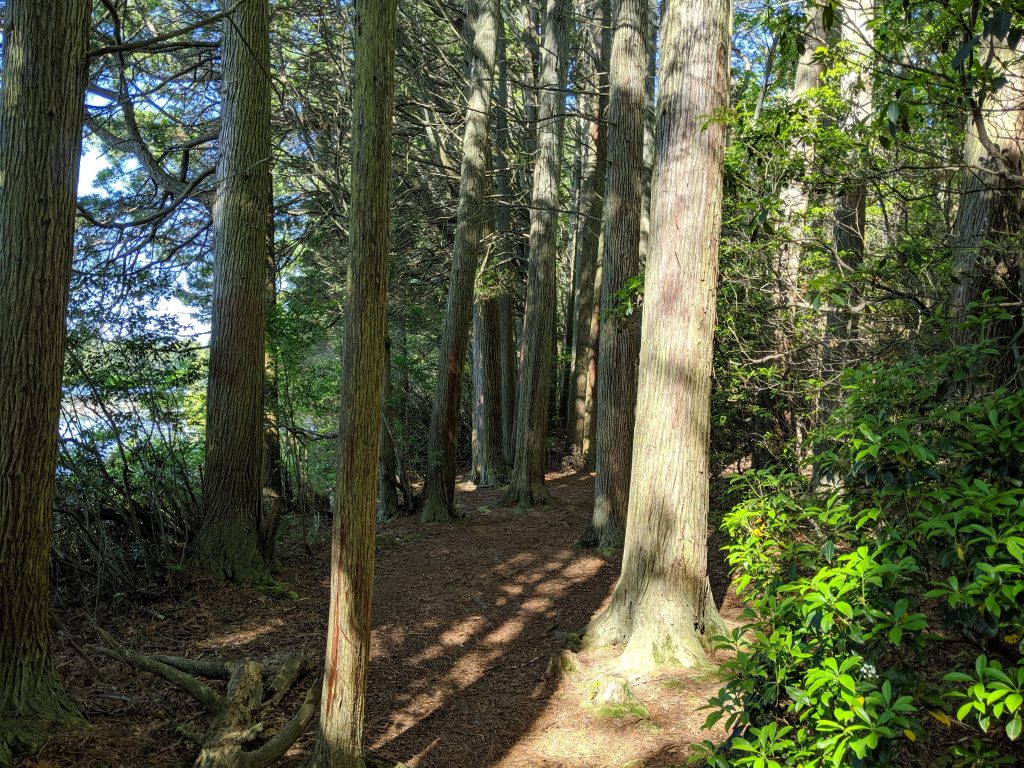 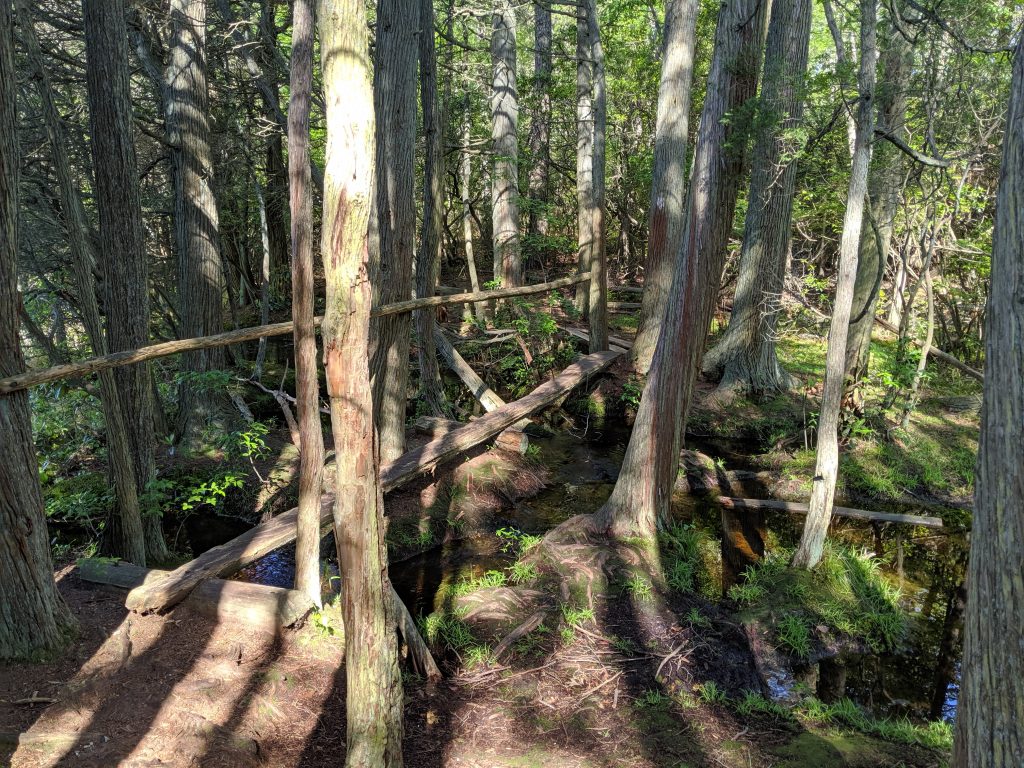 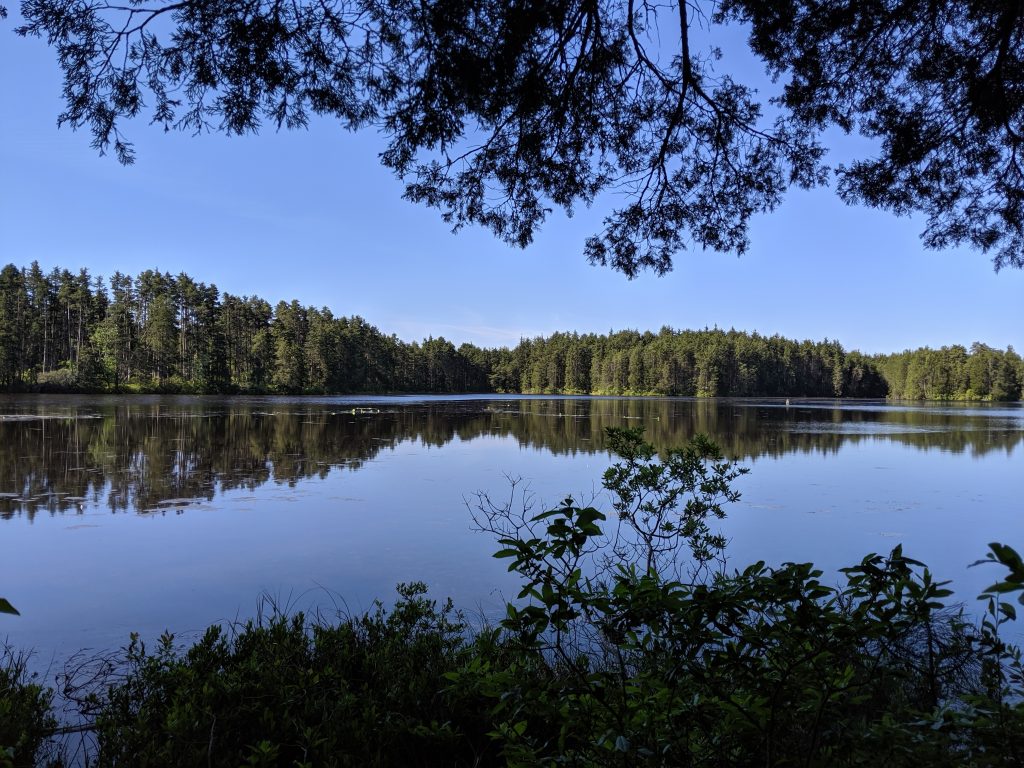 This was some of my favorite part of the trail as there was lots of water and lots of bridges to cross.  We had rain the other day, but the trails were mostly dry; with only a few spongy spots later on.

Once the trail left the lake, it veered off to the northwest part of the park.  Here’s were there were hills (which I wasn’t really expecting.)  Walking in this area (at 10 in the morning) I distinctly heard gun fire – I don’t know if there was a range nearby, or someone hunting.  I doubt it was fireworks that early in the morning. 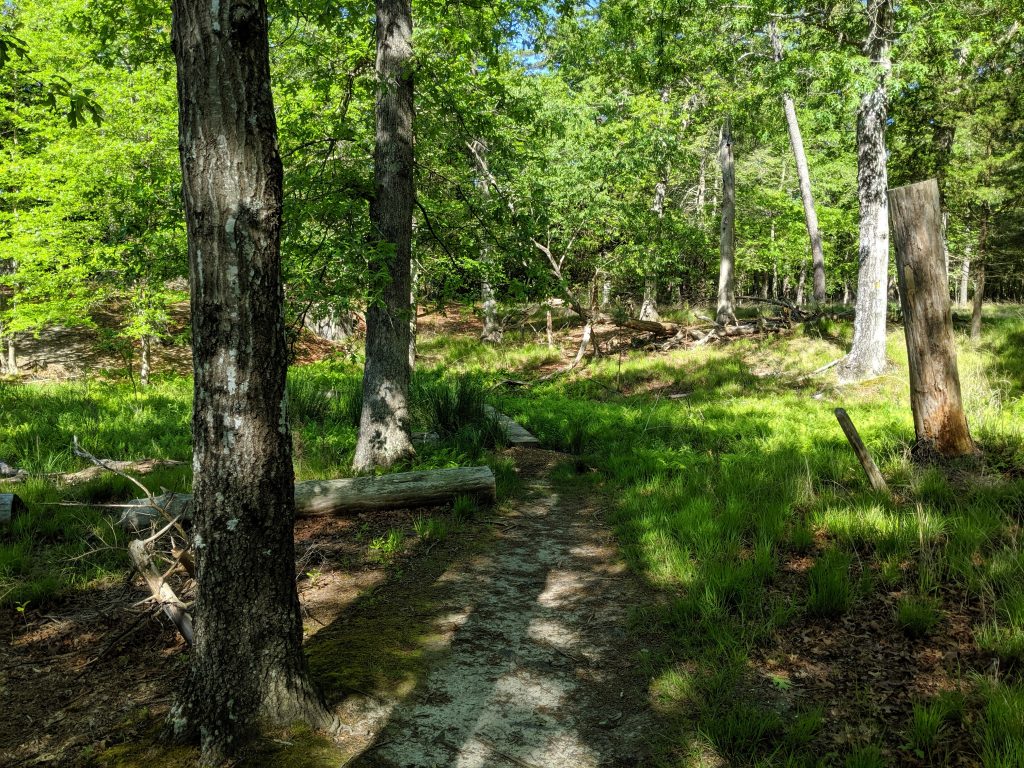 I enjoyed the fact that there were very distinct and different environments as you walked along.  The trail, for the most part, was dirt or sand, occasionally covered with pine needles – very forgiving.  Which was great on a longer walk.  One section of the park was hilly.  One section had a cedar forest.  There were lots of boardwalks.  One section contained thick Mountain Laurel.   And what would the Pine Barrens be without pitch pine.  For over eight miles, there was lots of diversity. 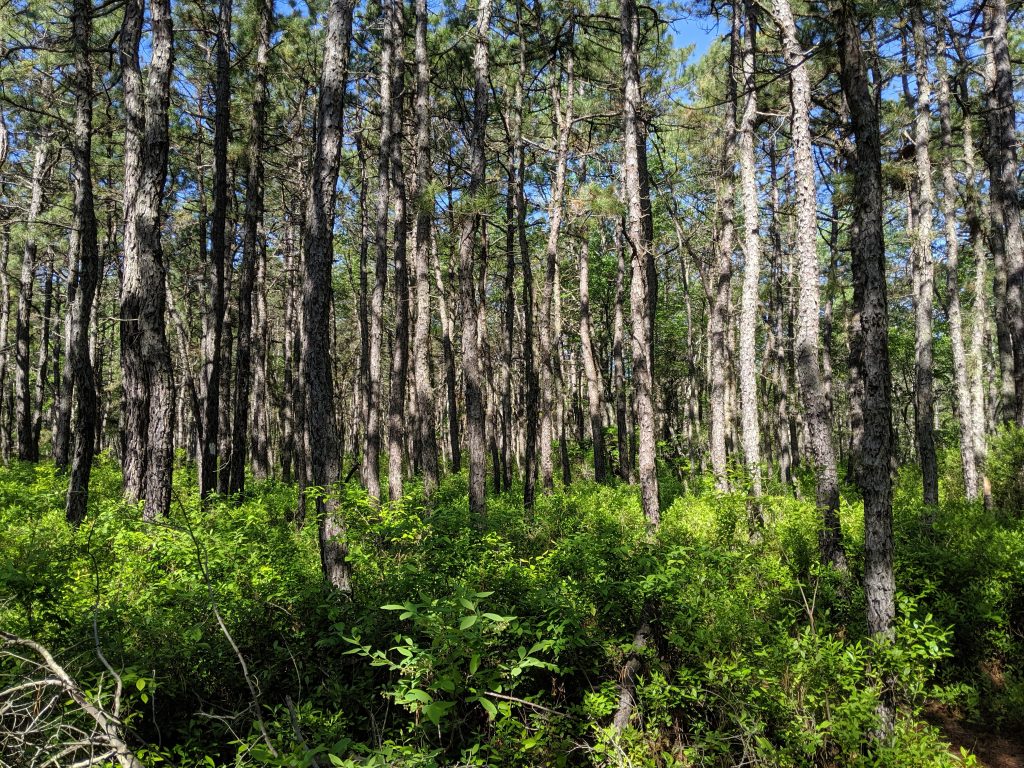 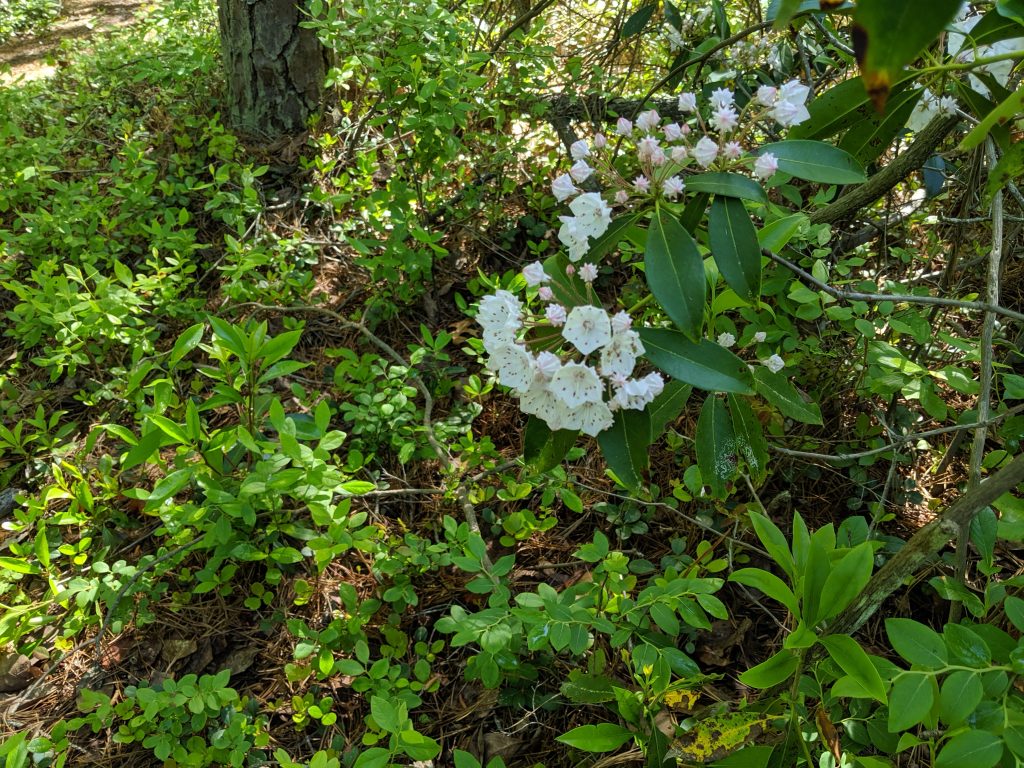 This next picture doesn’t do justice, this was a pretty steep hill, at the top of which was a bench – a perfect water break. 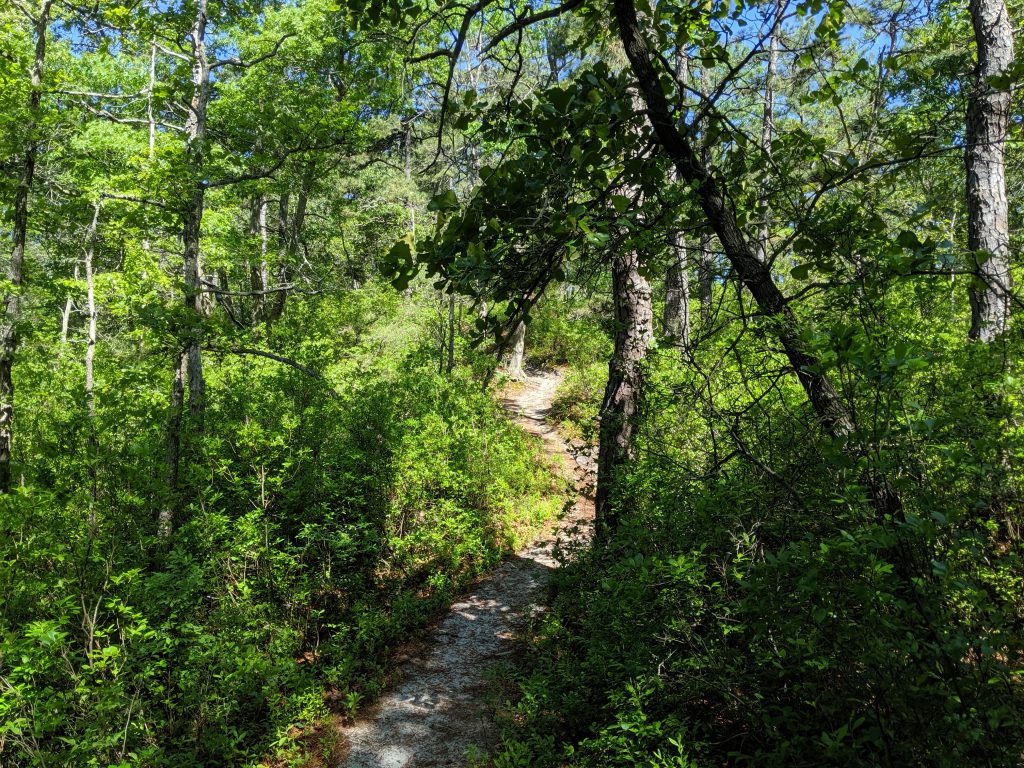 The map shows two hills: Penns Hill, with an elevation of 126 feet, and Laurel Hill, 130 feet. 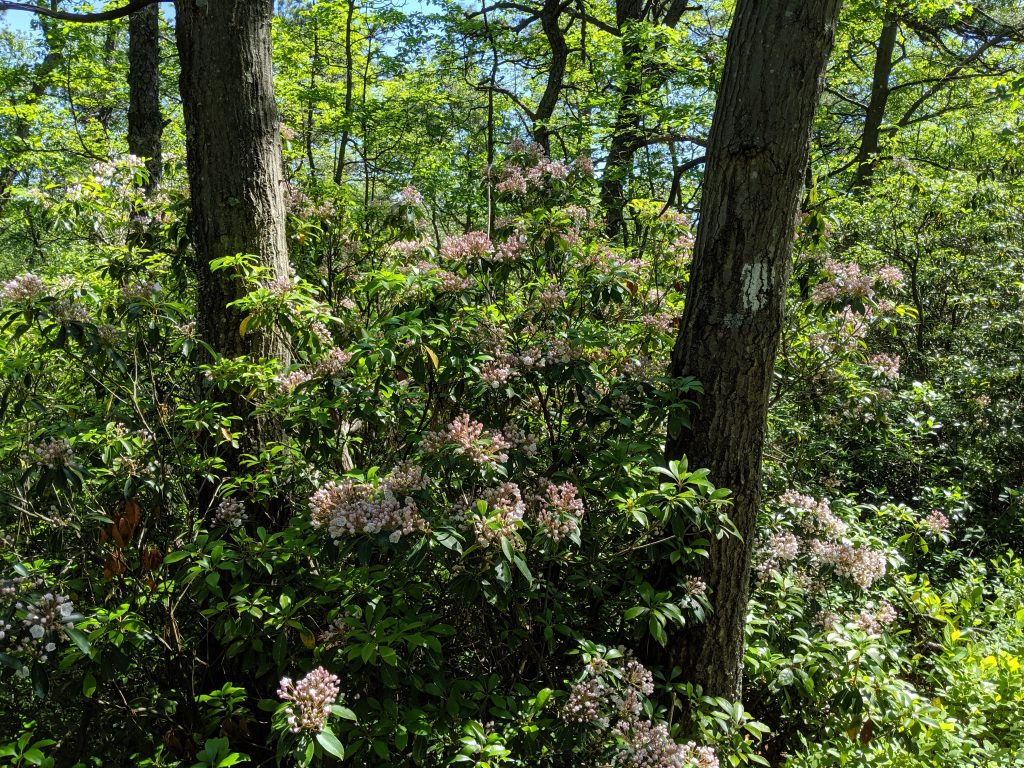 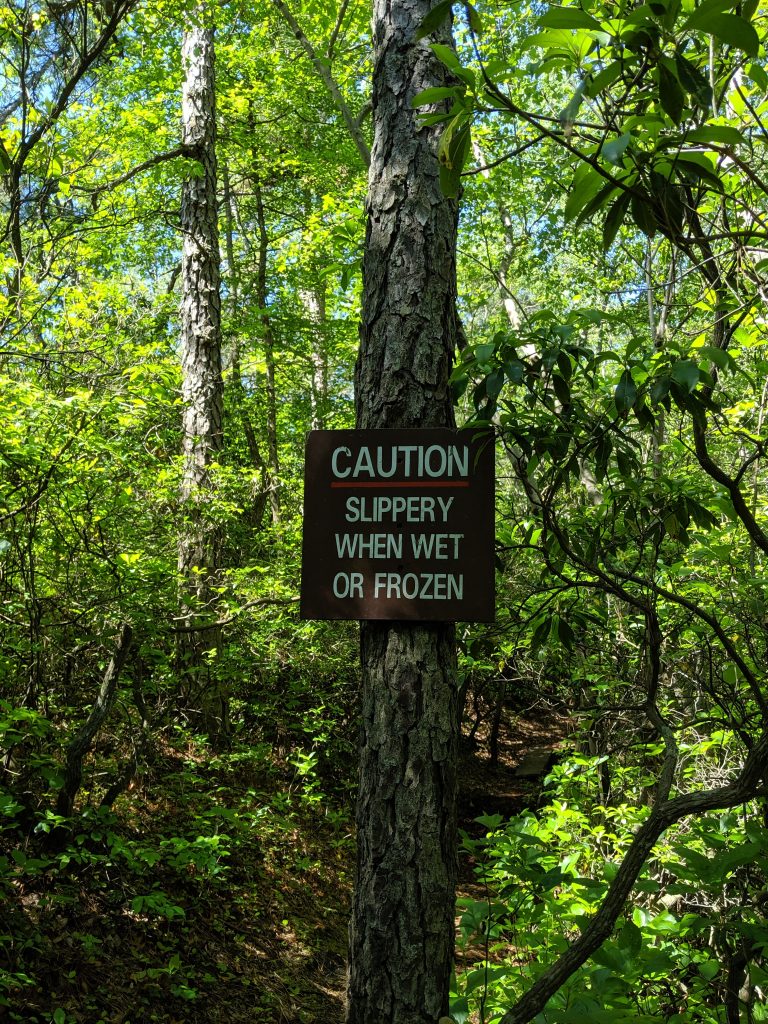 I heard lots of birds, caught a glimpse of a chipmunk or two; but that was about it for wildlife. 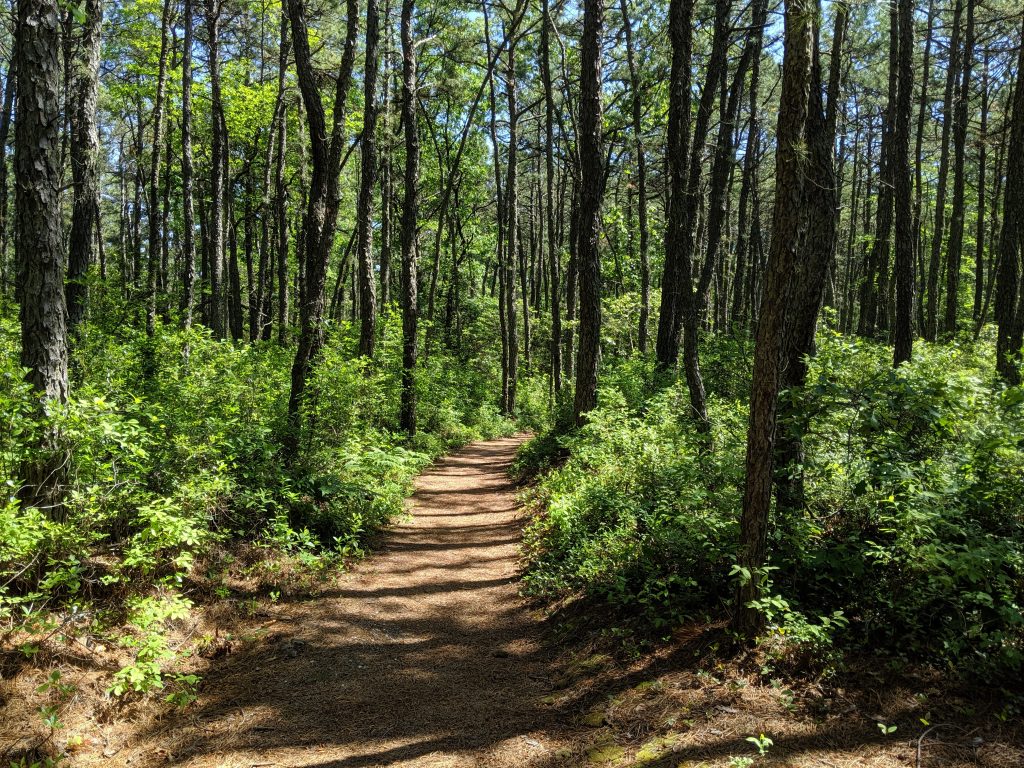 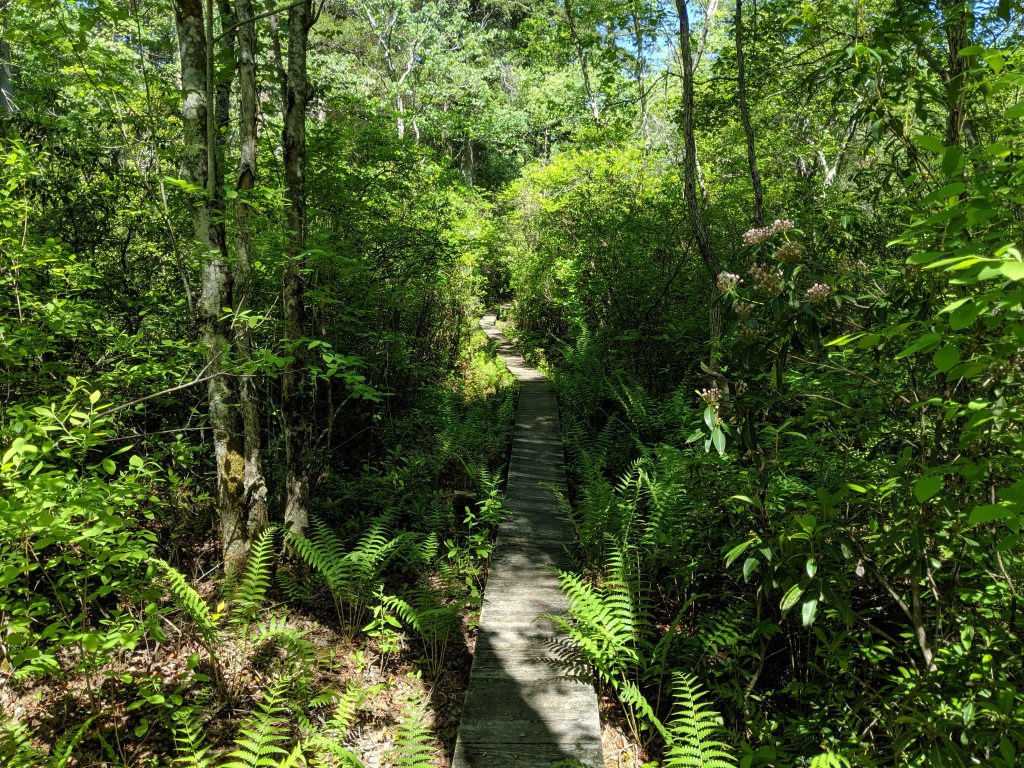 Right near the end of the hike I came across this sign: 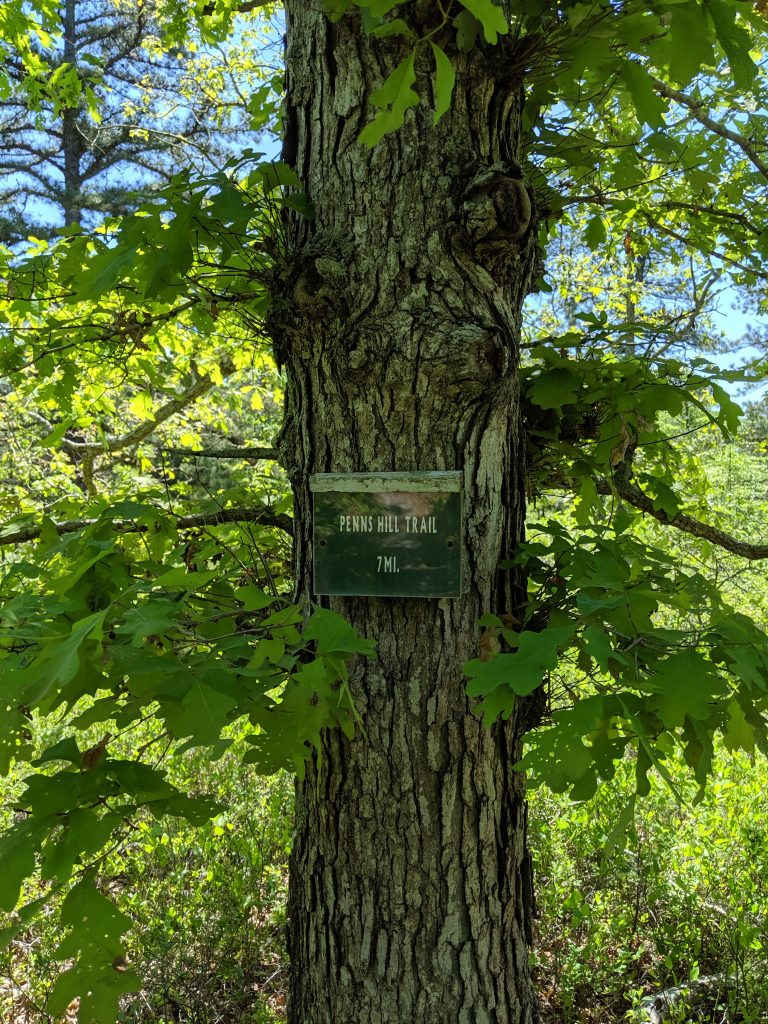 I’m not sure how accurate the sign is, and it was the only mileage/distance sign I saw on the whole hike.  It was getting pretty hot (and I was getting tired) at this point, so I did not check my GPS. 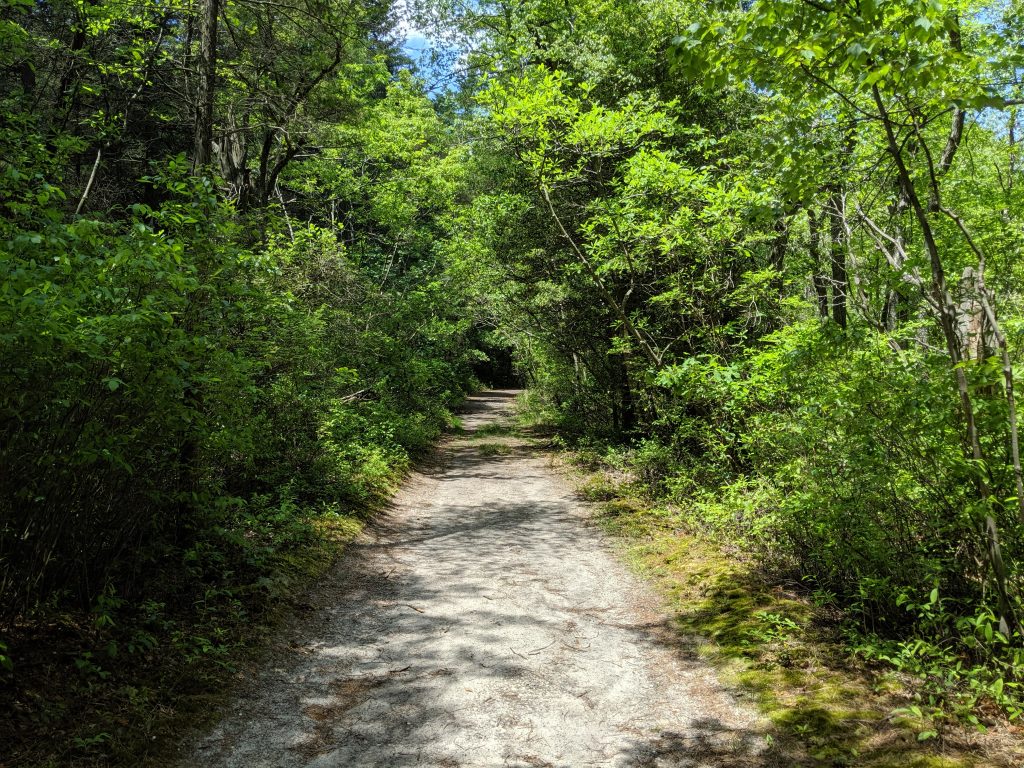 The final bridge crossing was over Oyster Creek, which I crossed at least once before.  This bridge was big enough for a car to drive over. 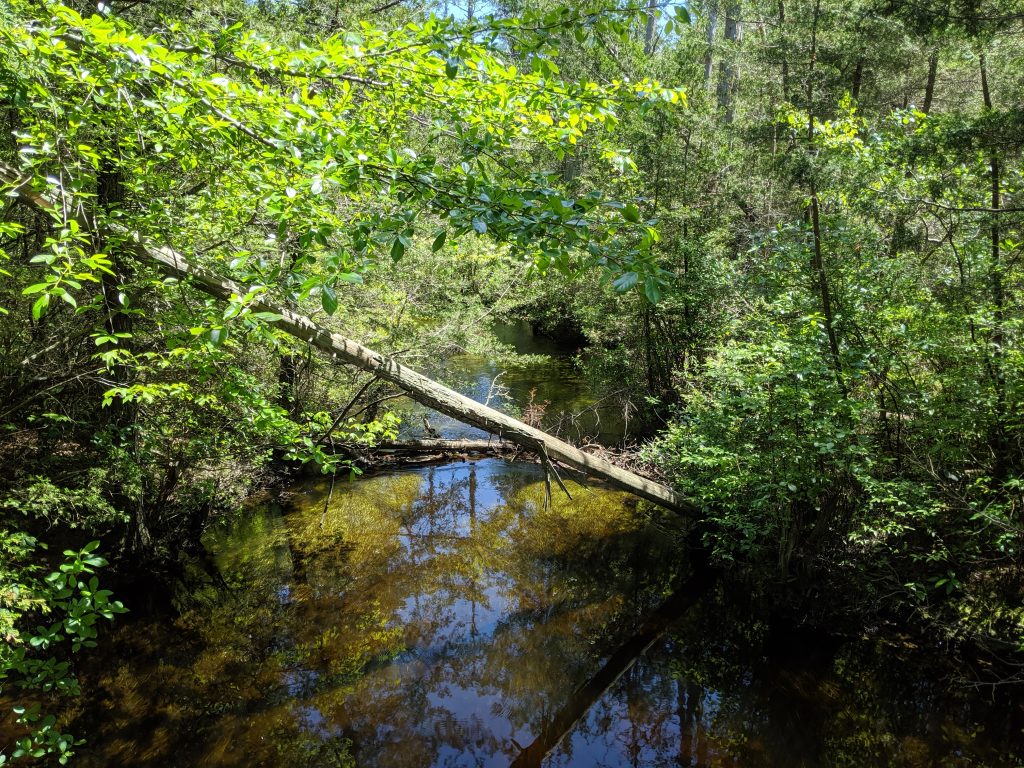 This was another great hike in the Ocean County Park system.  Trails were well marked, though there are a couple of unmarked trails that criss-cross where I walked.  It’s kind of hard to get lost as long as you stay on the trails.  Wells Mills park does have a reputation for ticks and I can attest that they were out in force.  Be prepared.  Finally, if you decide to hike the Penns Hill trail, bring enough water if it will be sunny and/or hot.  It’s a good distance.  Should you decide (or need) to cut the hike short, there are junctions with the yellow or green trail that will save you mileage.

One final note.  I left at the parking lot and headed north on the Parkway.  Big mistake on Memorial Day, as the traffic northbound was horrendous.  I got on the parkway at exit 69, and it took me an hour to get to Route 70, which is exit 89.  Traffic didn’t clear until I passed exit 91.  It will probably get much worse into the afternoon and evening .  And I thought I would beat the traffic.