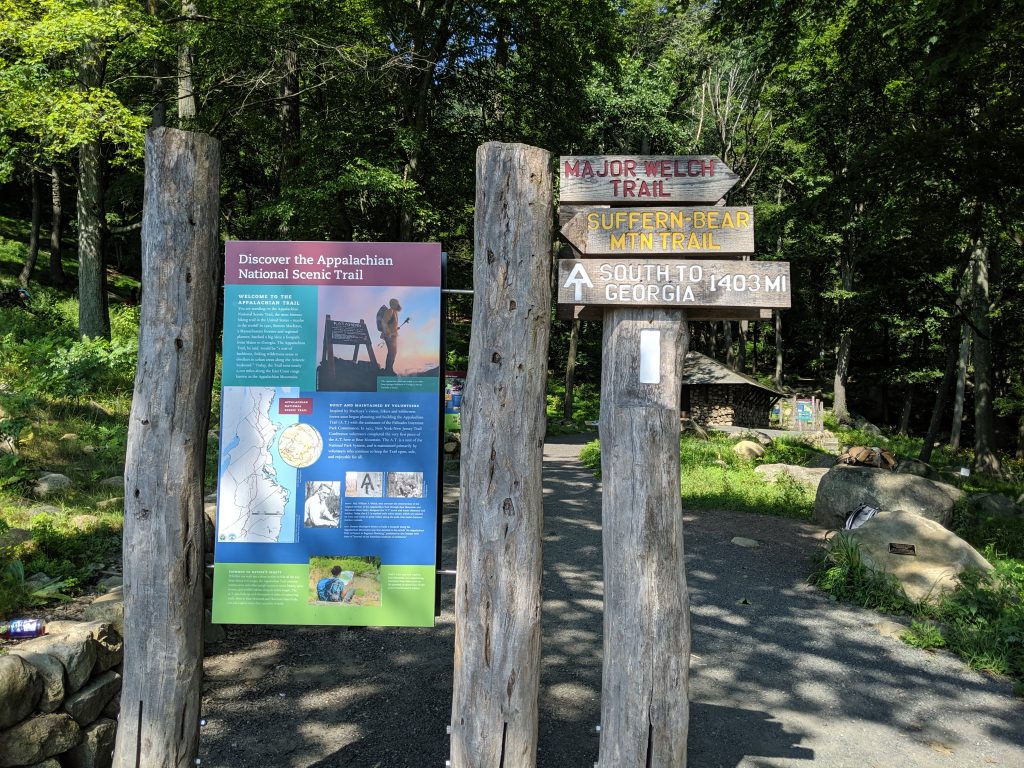 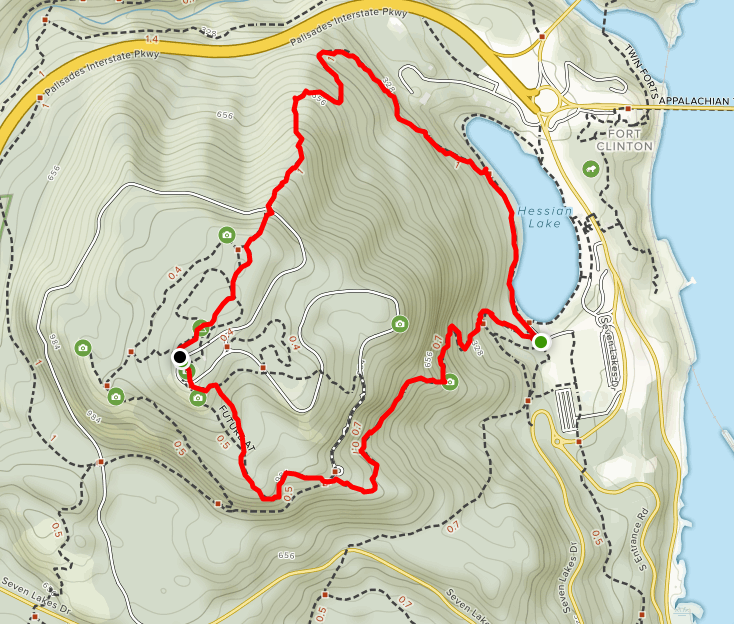 This hike has been on my list for a while.  What’s interesting is that I remember going by the park when I was little when we would visit my grandparents.  We would take the Palisades Parkway to the Bear Mountain bridge, cross, and take 9D up.  But, it’s been a long long time since I had been up this way.  Leaving the house a little after 8:00, skies were clear, the sun was out, and it was the middle 70s.  When I got to the park, it was already in the middle 80s.  My plan of attack was to go up the Major Welch as I had heard that there was some rock scrambling on the way up.  Oh, there was.  Just look at the map:  after you go by the lake, and turn off the paved trail, you can see how many contour lines I crossed in a short amount of time. 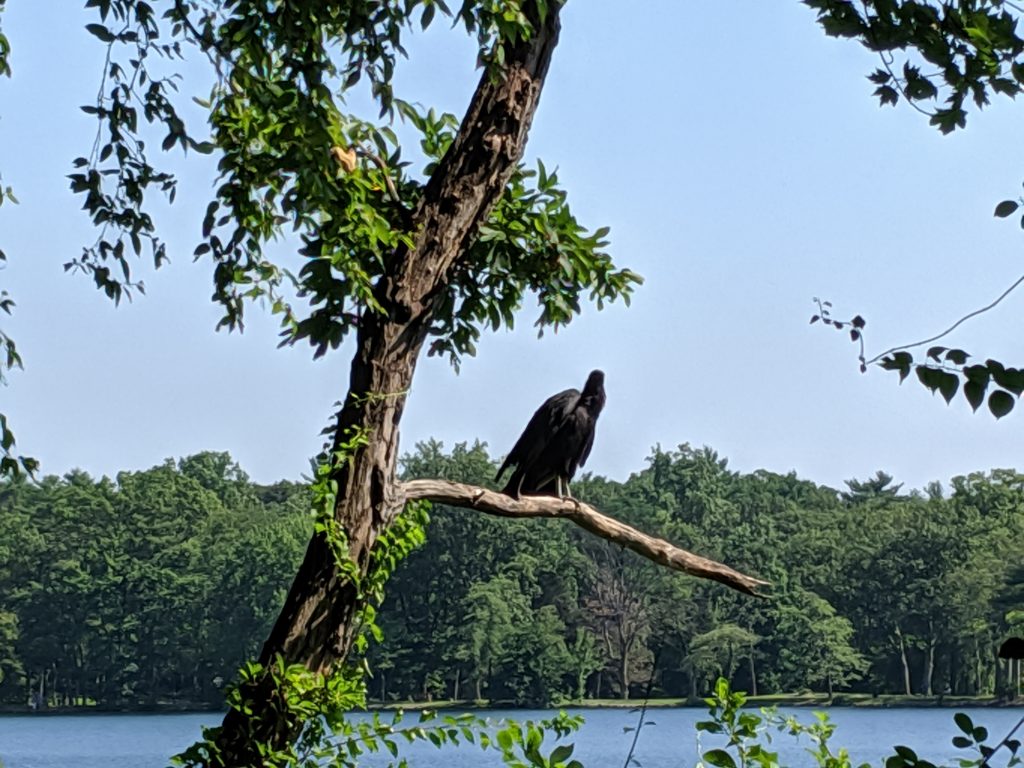 I’m pretty sure this guy was circling overhead when I was part way through the rocks.  I think he was just getting a count of how many walked by so he could triage lunch.

Some shots of walking by Hessian Lake: 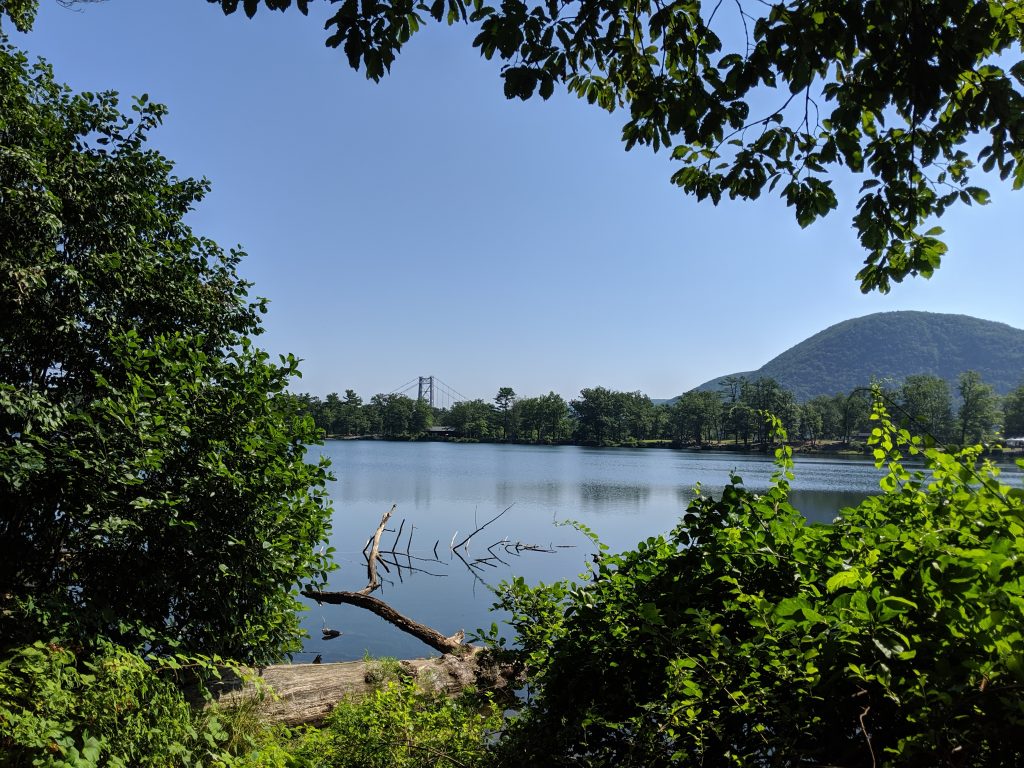 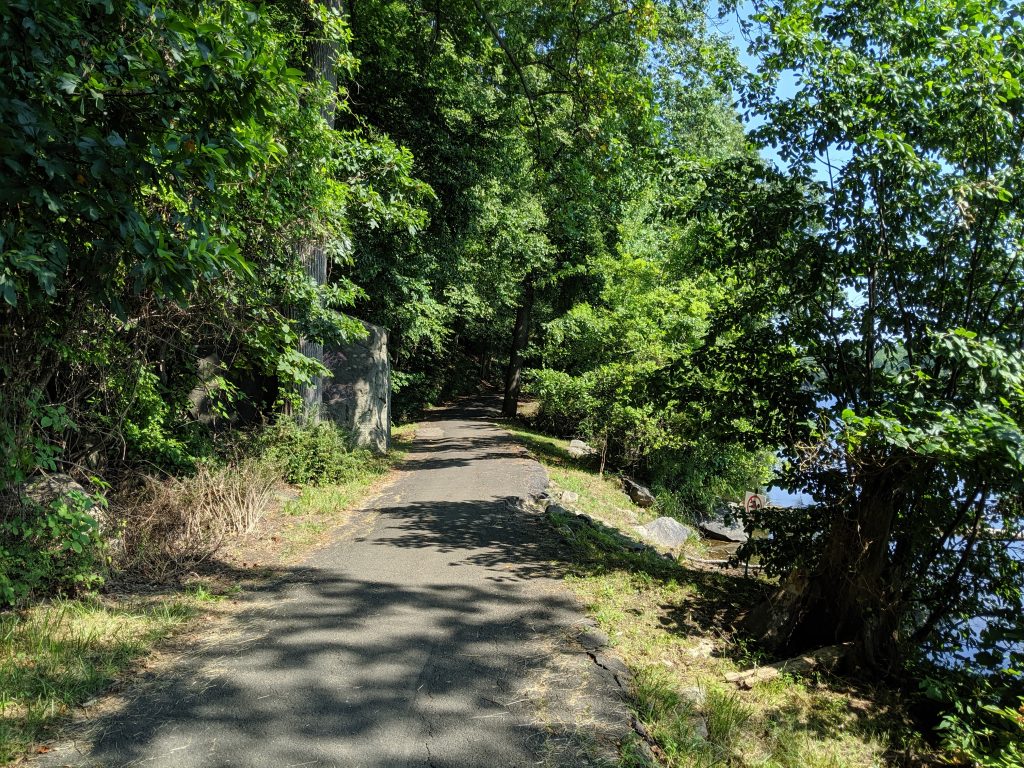 It was walking on pavement around the lake.  Make sure the lake is immediately to your right – the trail head isn’t the most intuitive. 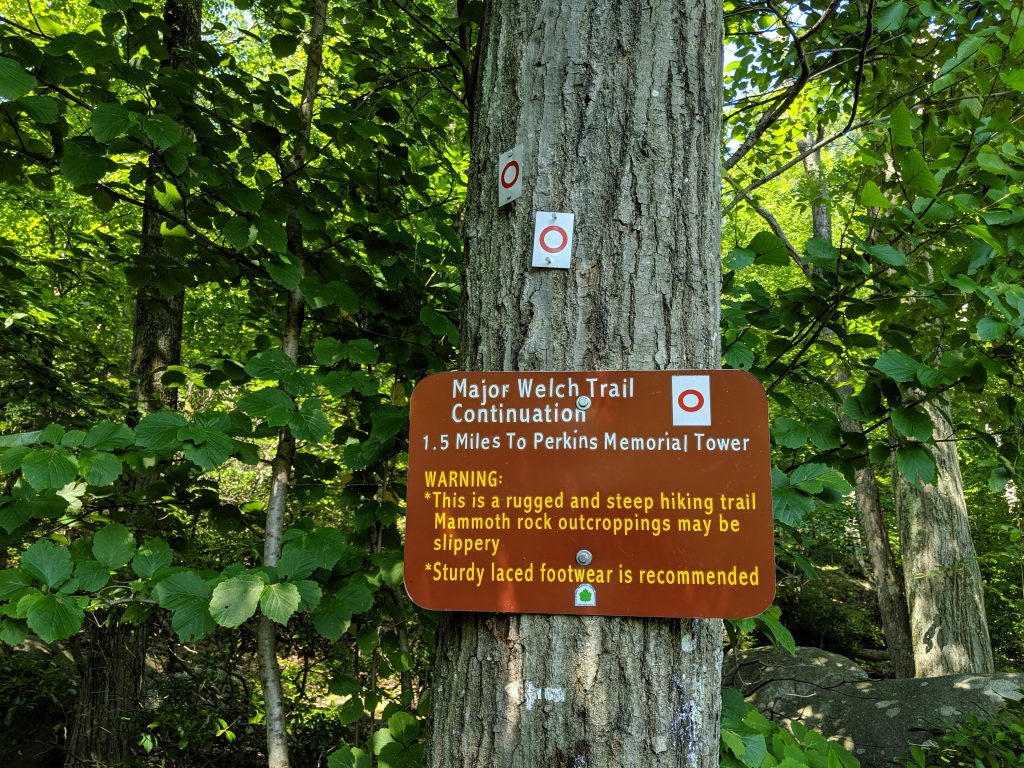 Here’s where the trail leaves the pavement and the lake.  Read the sign.  That’s the longest 1.5 miles I think I’ve ever walked.  Of course, I started to blow through the rocks when I left the pavement – it wasn’t that bad. 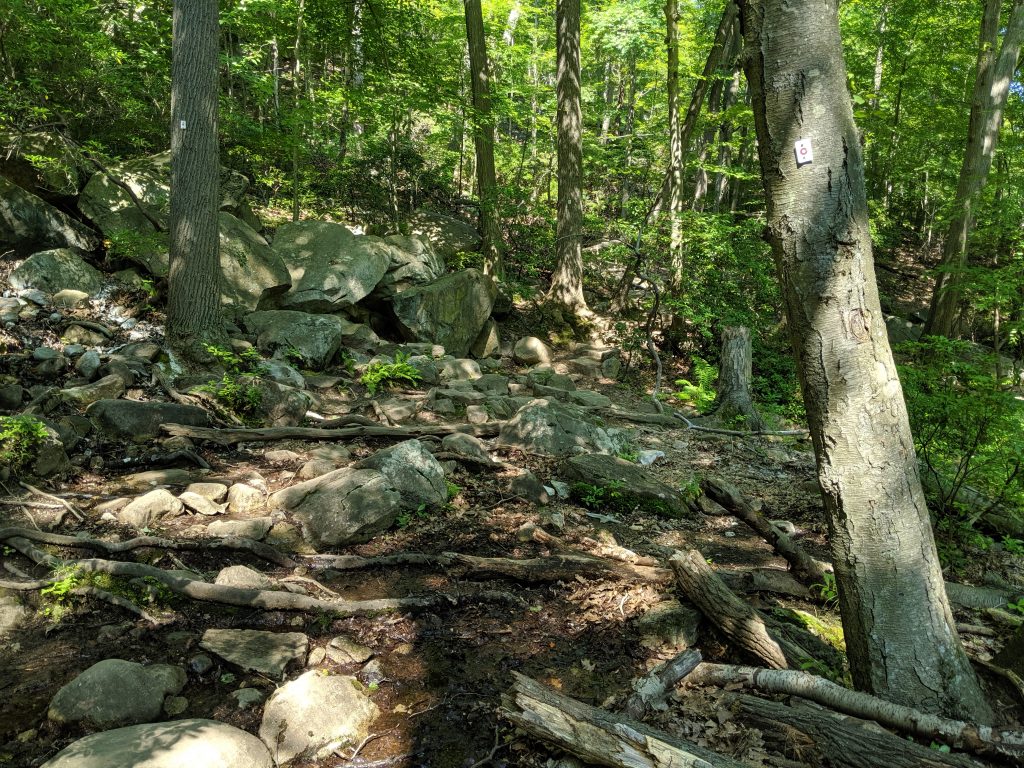 There were some (short) sections that were pretty flat. 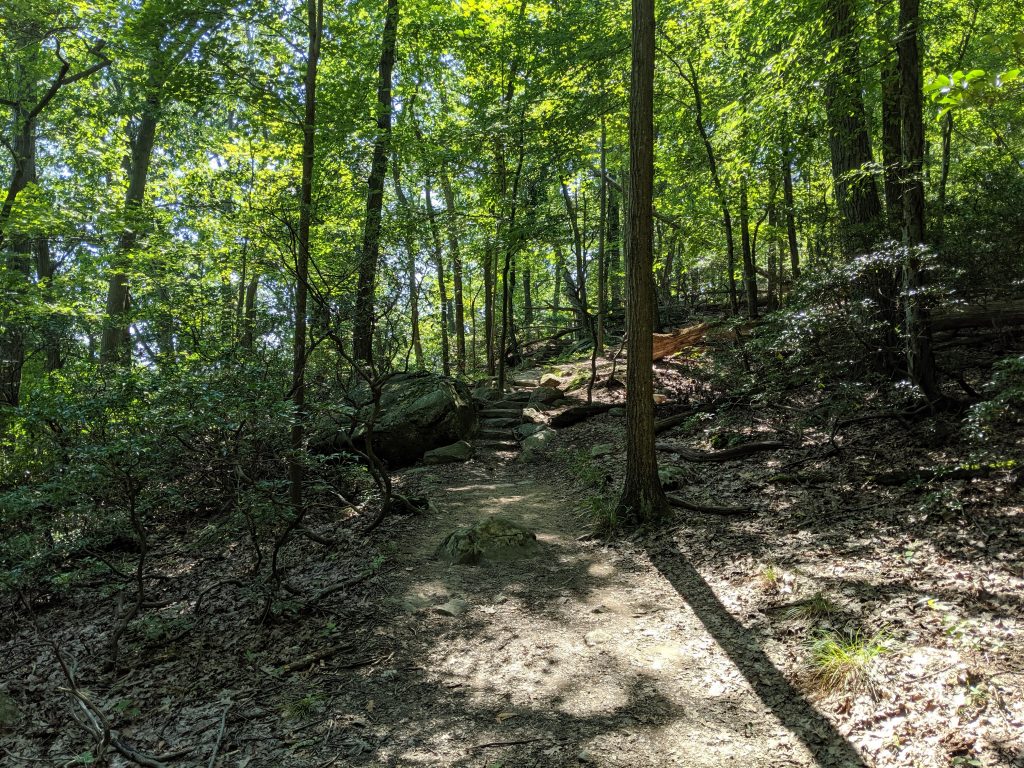 There were lots and lots of those stairs.  And yes, they took a toll. 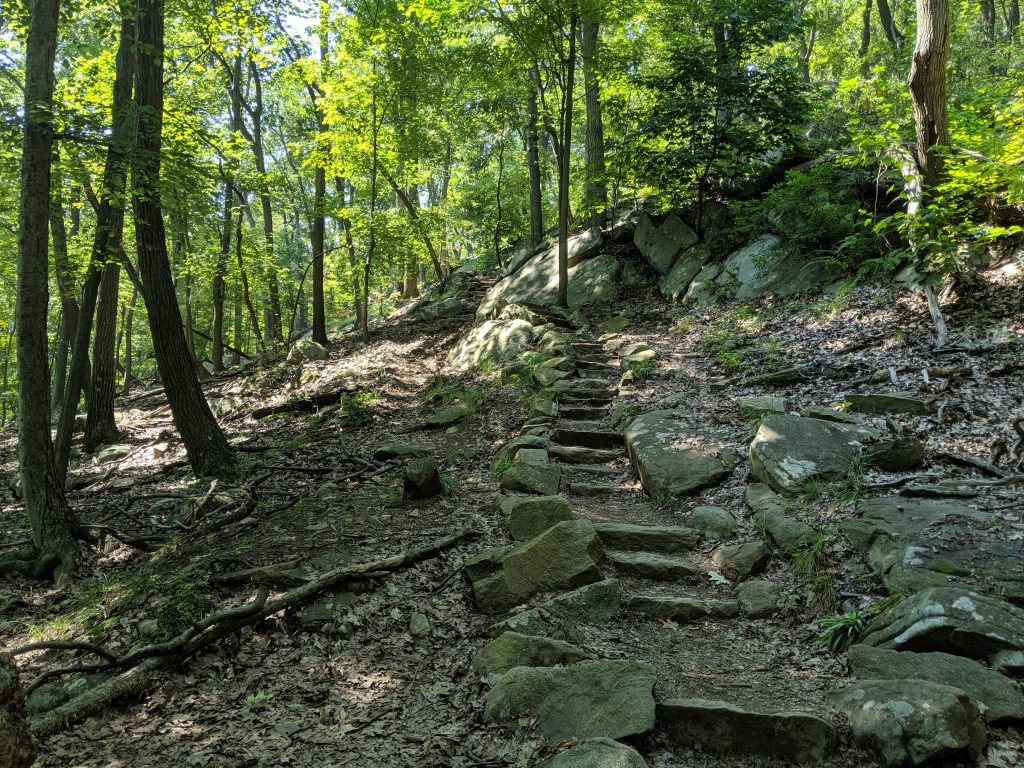 After an immediate left turn, the fun began.  I like rock scrambling as much as the next guy; but wow, this went on for a while – or so it seemed/felt.  These next pictures just don’t do it justice.  There were multiple sections of these immense boulders to scramble up.  And in the heat, it got tiring. 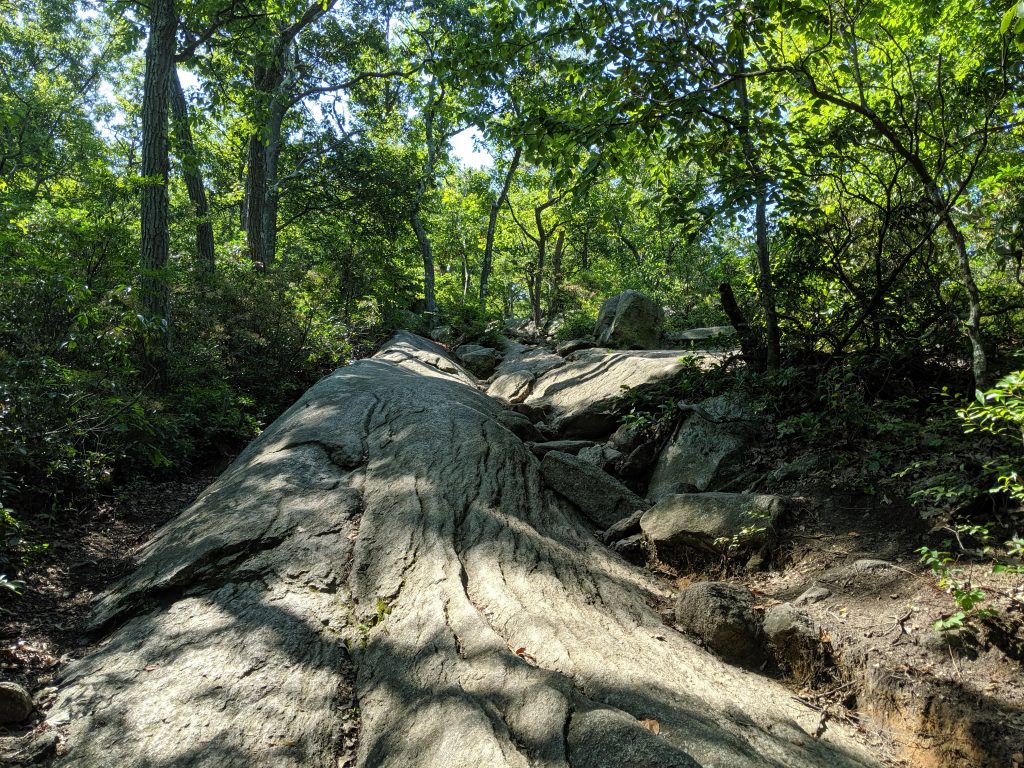 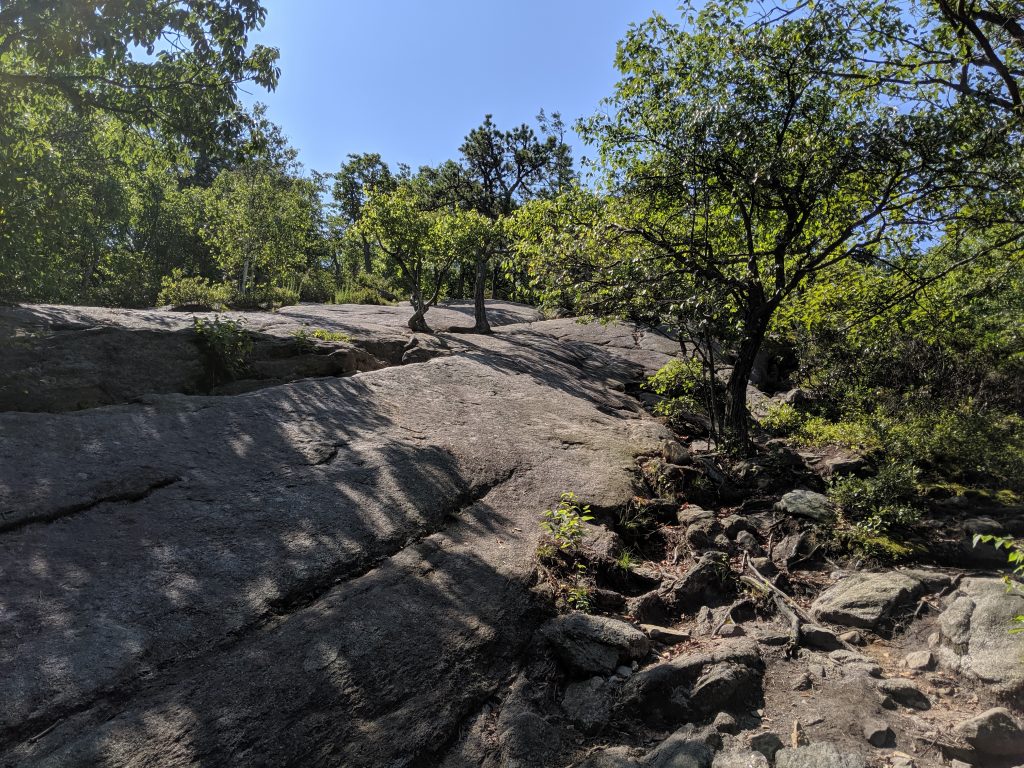 I only managed two pictures.  There were more sections.  At this point there were three or four groups of us leap frogging each other as we passed through the scrambles.  At one point, though, a young woman came RUNNING by us.  She blew by us like we were standing still (we were.)  Just before the top, the trail crosses Perkins Drive, and it’s a nice place to stop and get a drink.  The groups I was with all commented on how someone was RUNNING up that trail.

After crossing the road, and one more scramble, the trail flattens for a bit. 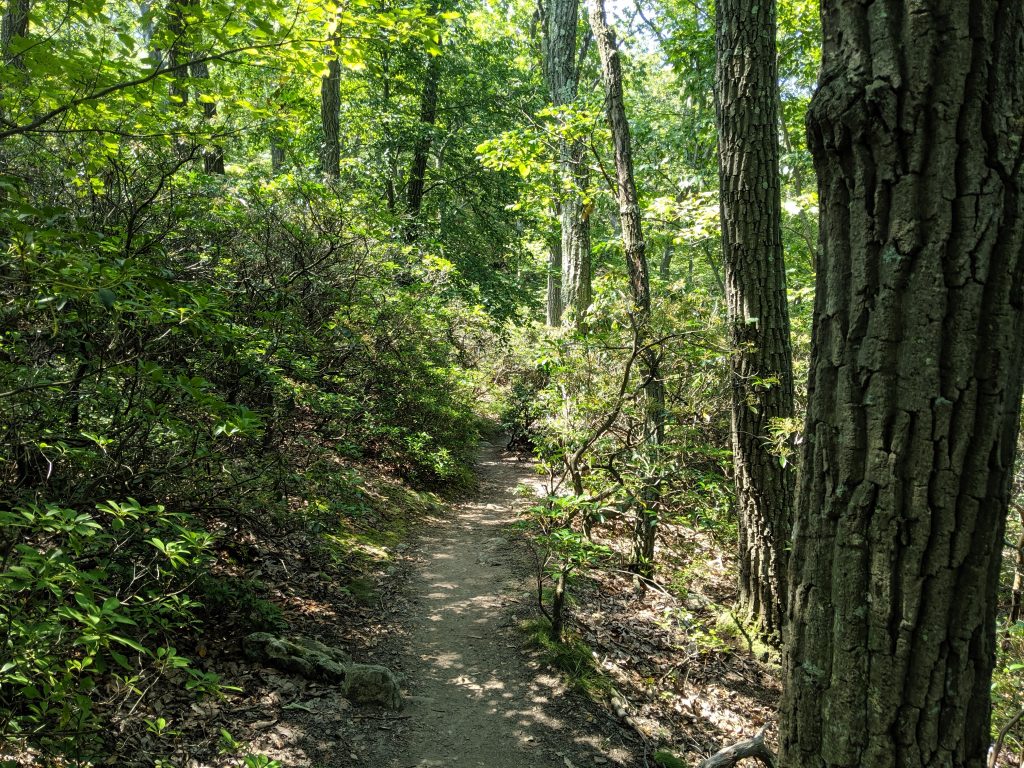 Don’t be surprised at the top, Perkins  Drive stops at the fire tower for people to picnic.  The looks I got when I came out of the woods were priceless.  Probably the best part, there was a soda machine selling  Powerade, maybe the best $3 I have ever spent.  I had plenty of water, but I needed something else. 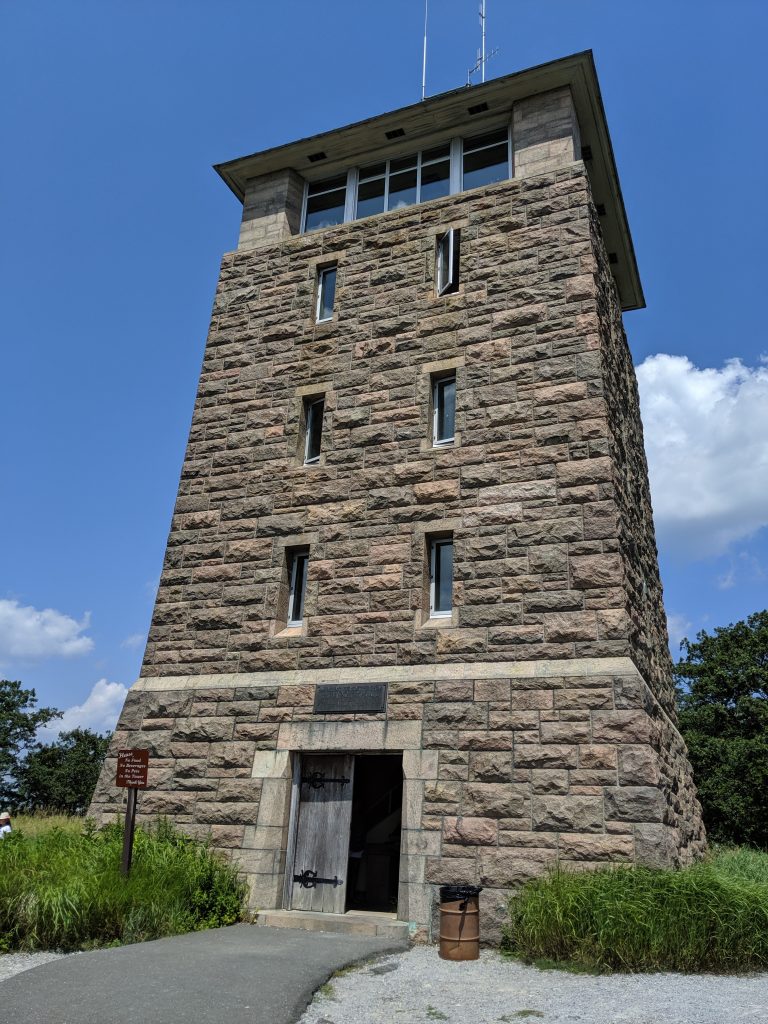 I looked at the fire tower for a good ten minutes.  After coming up that grueling trail, did I really want to climb the steps to the top to see the view?  No.  But when was I coming back – so of course I climbed.  And I’ll admit, the view was nice.  Supposedly, you could see four states from the top.  But I needed to eat, and finish that Powerade. 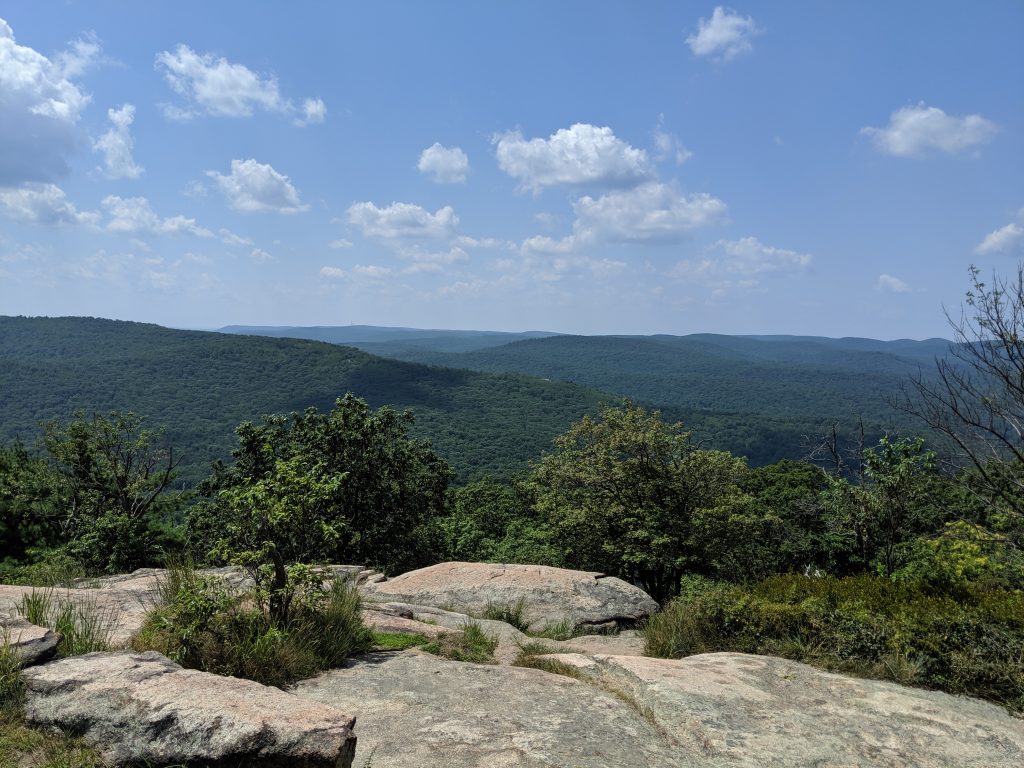 After a good long rest, it was down the Appalachian Trail. 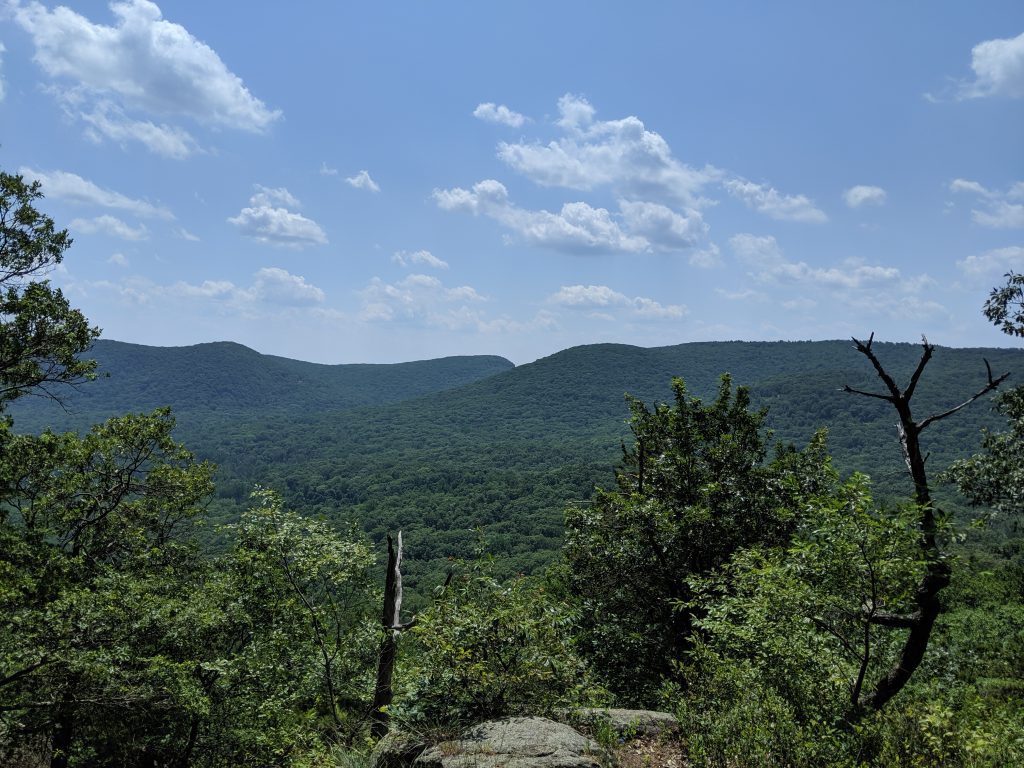 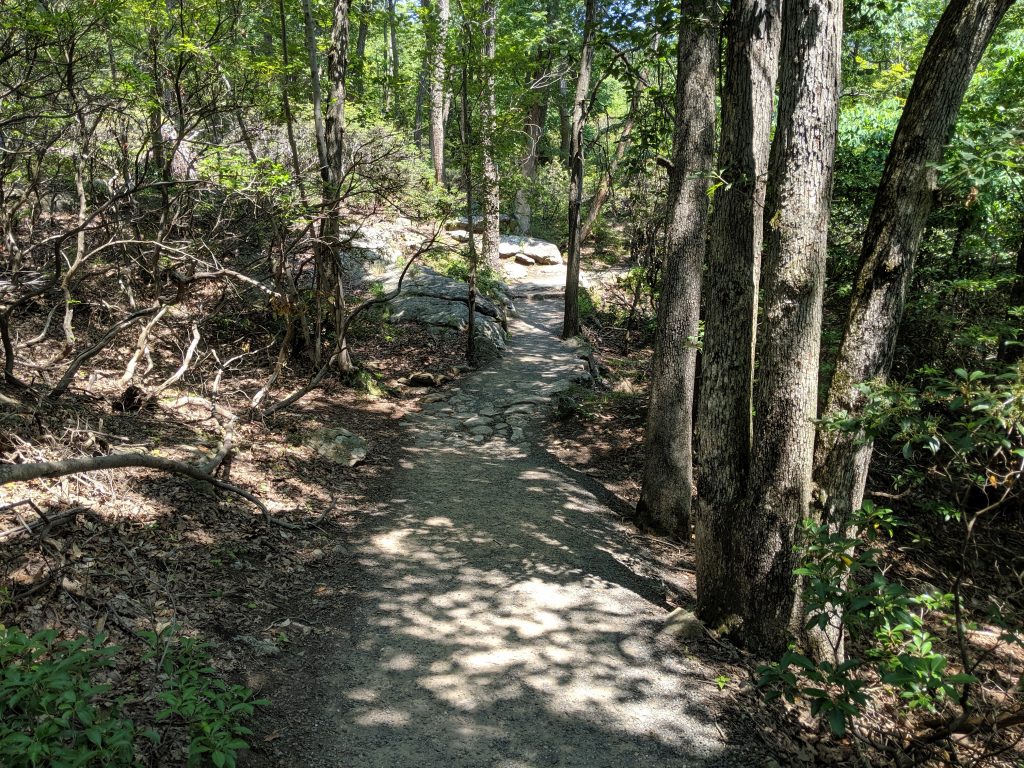 Don’t kid yourself.  Yes, it’s crushed gravel, all the way down – a welcome respite from what I climbed going up.  However, there are a ton of stairs cut out of rock – which I really appreciate – but takes its toll on the way down.

There were a couple of viewpoints on the way down: 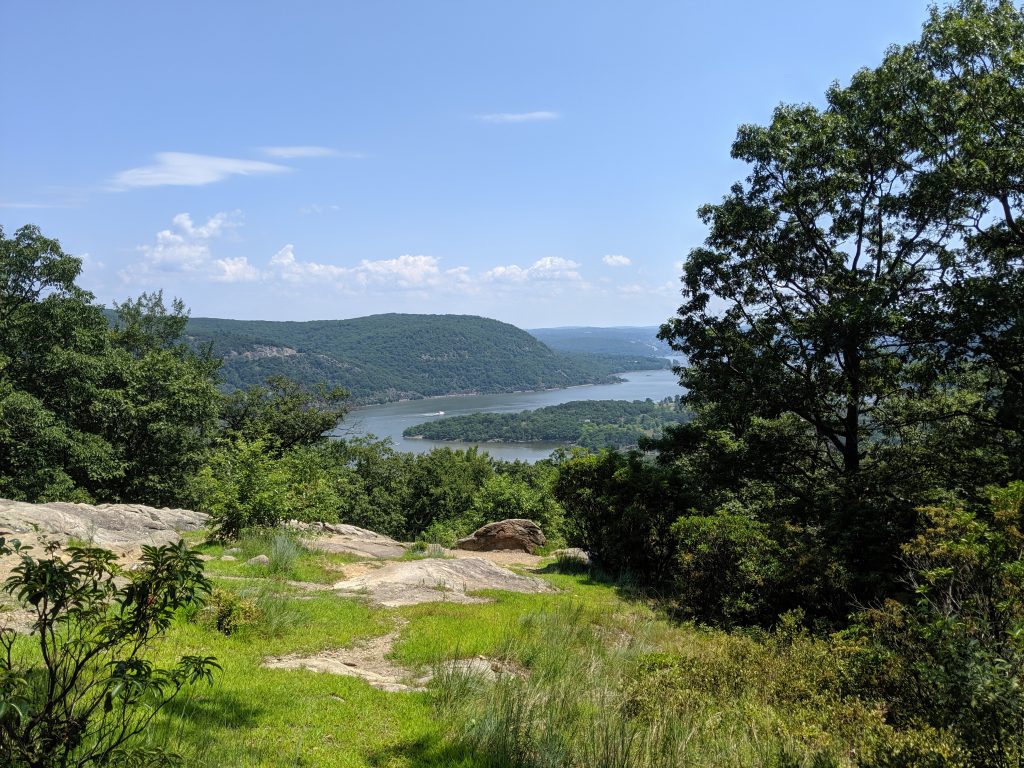 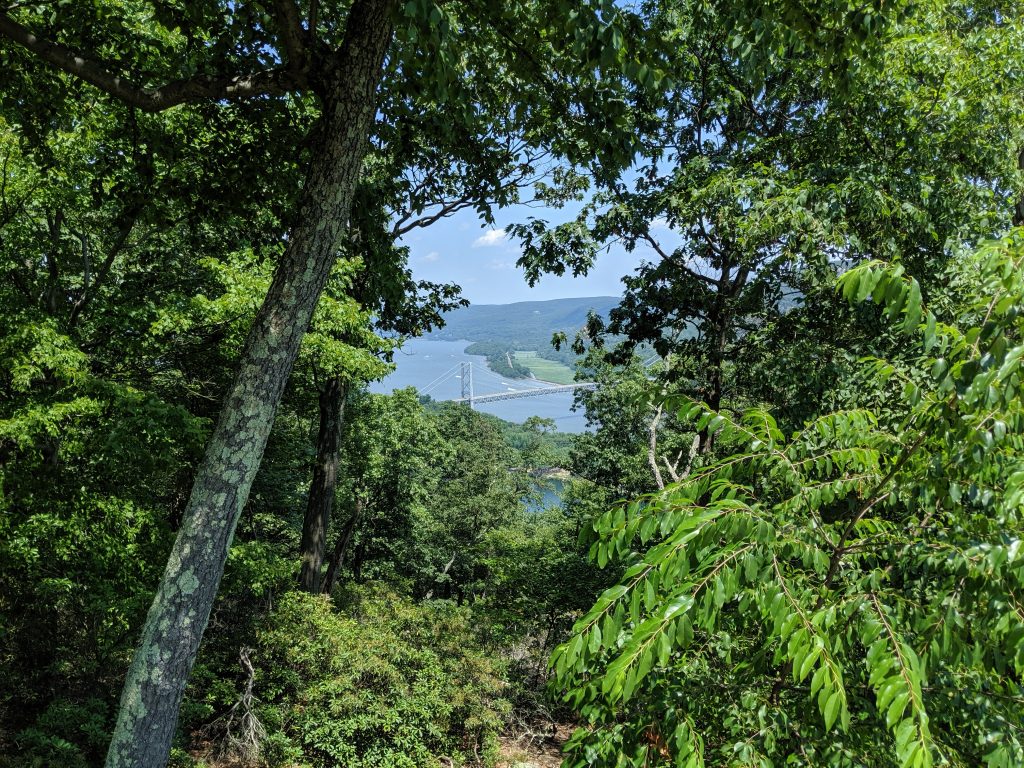 To give you an idea on the stairs, I took this picture looking back: 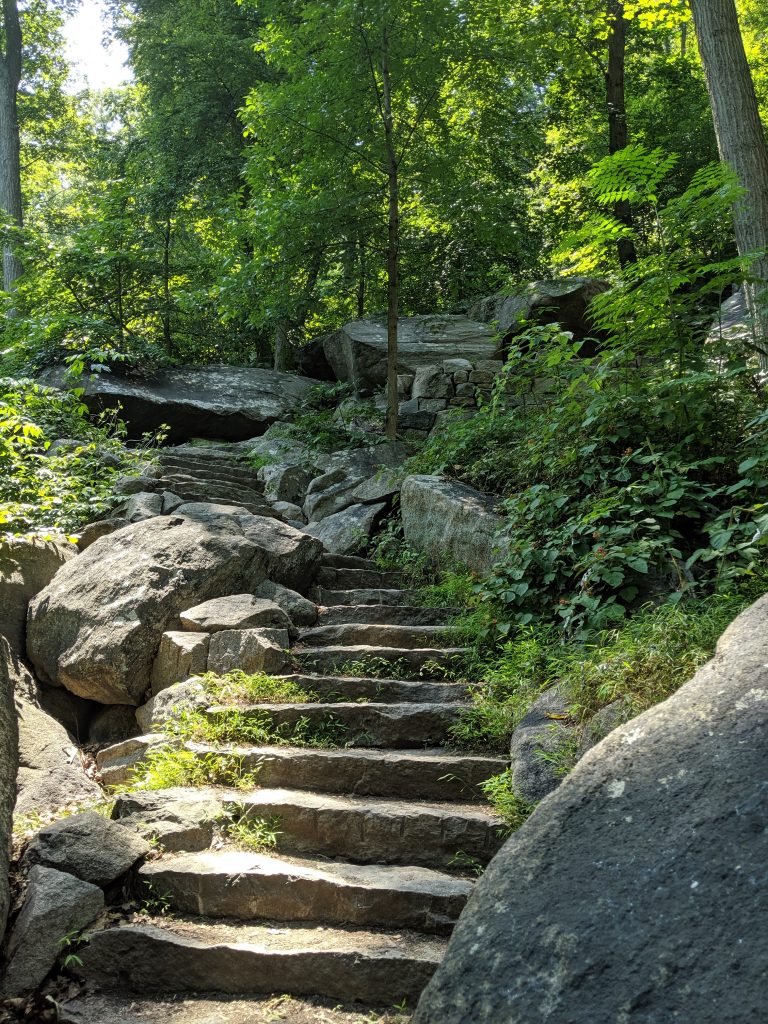 It’s really impressive how this portion of the Appalachian Trail was built.  And, when you reach the bottom, there are interpretive displays on building the trail, and some of the features that make up a trail.  I highly recommend stopping to see the displays.

Another great hike, though if I were to plan it again, I would wait until the temperatures have dropped a bit.  Be prepared when doing this hike.  Bring plenty of water (though there are vending machines at the top.)  And know that the rock scrambling truly is strenuous.  My final verdict:  I loved it, I’ll pay the price tomorrow, but it will be worth it.  One final note: the park was PACKED with people, so get there early.  I didn’t have a problem at 10:00 when I arrived, but I suspect parking would be a premium much after that.  (Side note, it was $10 to get in the park.) 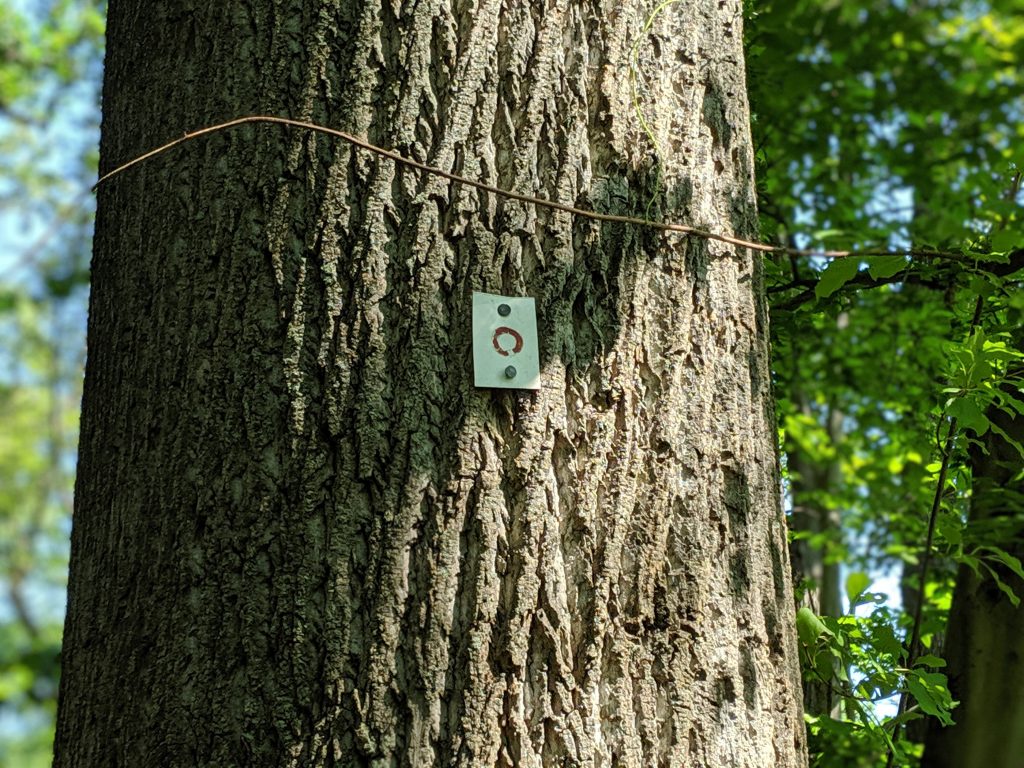 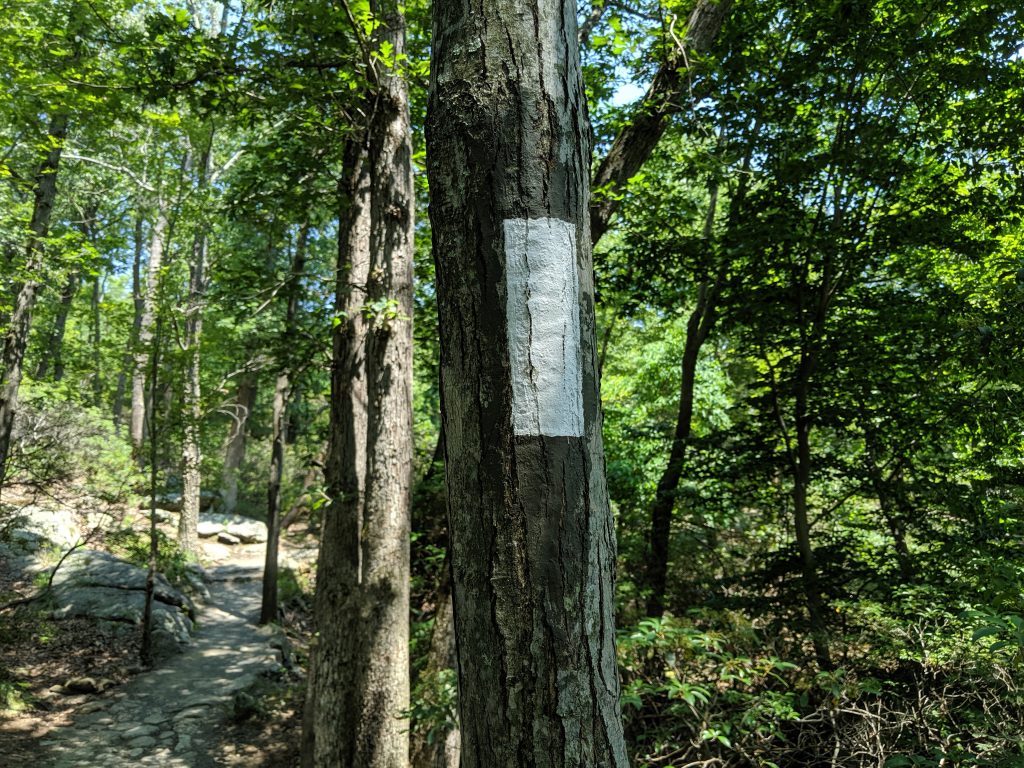 (Missing:  the piece of the trail at the top, around the fire tower.  Markers had the Major Welch red circle above the AT white blaze.)