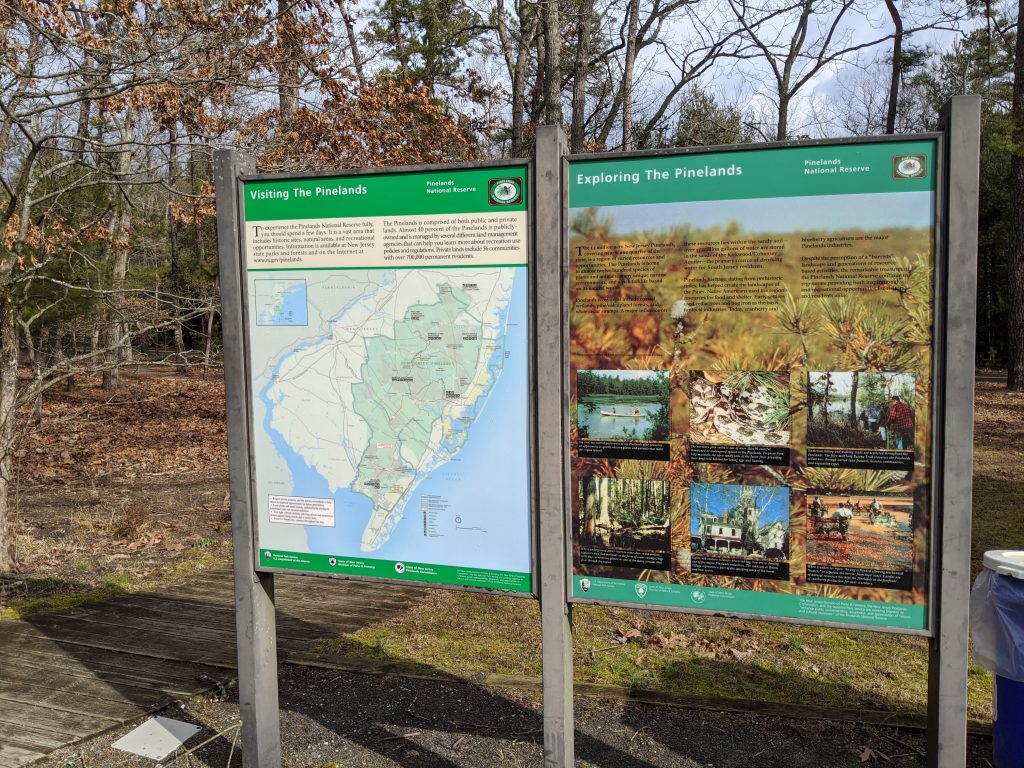 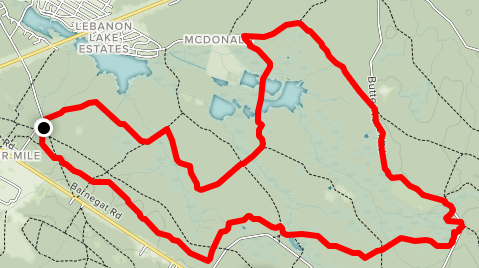 You can tell by the first picture that the sun is out and it looks like great weather for a hike.  That was true, to start.  I finished in the rain and with the temperatures lower than when I started.  This is another hike in “50 Hikes in New Jersey” that I wanted to check off, and it’s a great hike in the heart of the Pine Barrens.  One mistake I made (and rather crucial.)  I used the online map to plan my hike, figuring that there would be parking sort of where the Lebanon and the Cranberry Dot trail met.  That would make for a nice round trip of around eight miles.  Oops.  Parking is at the visitor center…I needed to take a trail or two to GET to my route, then a walk back to the car (from my proposed route.)  That’s how I got to 12 miles.  And yes, I’m still sore.

You’ll notice for this post there are almost as many pictures of blazes as there are of the hike itself.  There were many blazes on this hike, including one that isn’t on any map.

My original plan did not call for me to walk a portion of the Batona trail, but I’m glad I did.  I’m not one for much backpacking, so it’s doubtful I’ll ever hike the whole trail in one shot.  I may section hike it, because I really liked what I walked.  It’s well marked, and the trail (in this section) was a dream – loose dirt/sand, covered with pine needles.

Some pictures from the Batona trail: 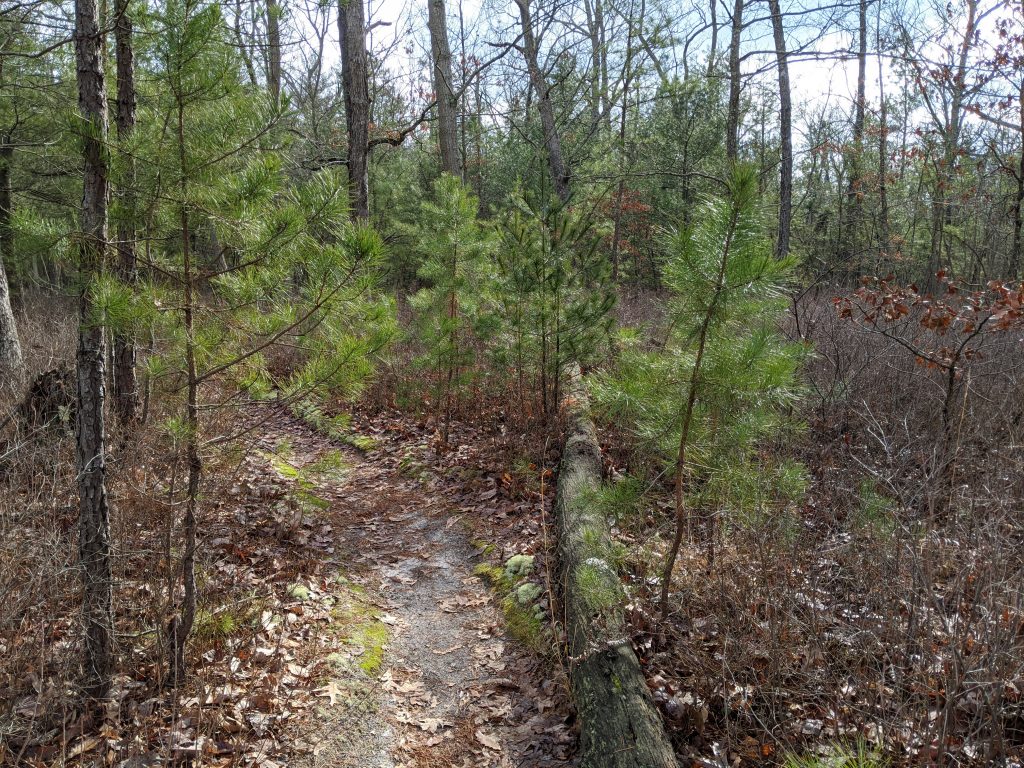 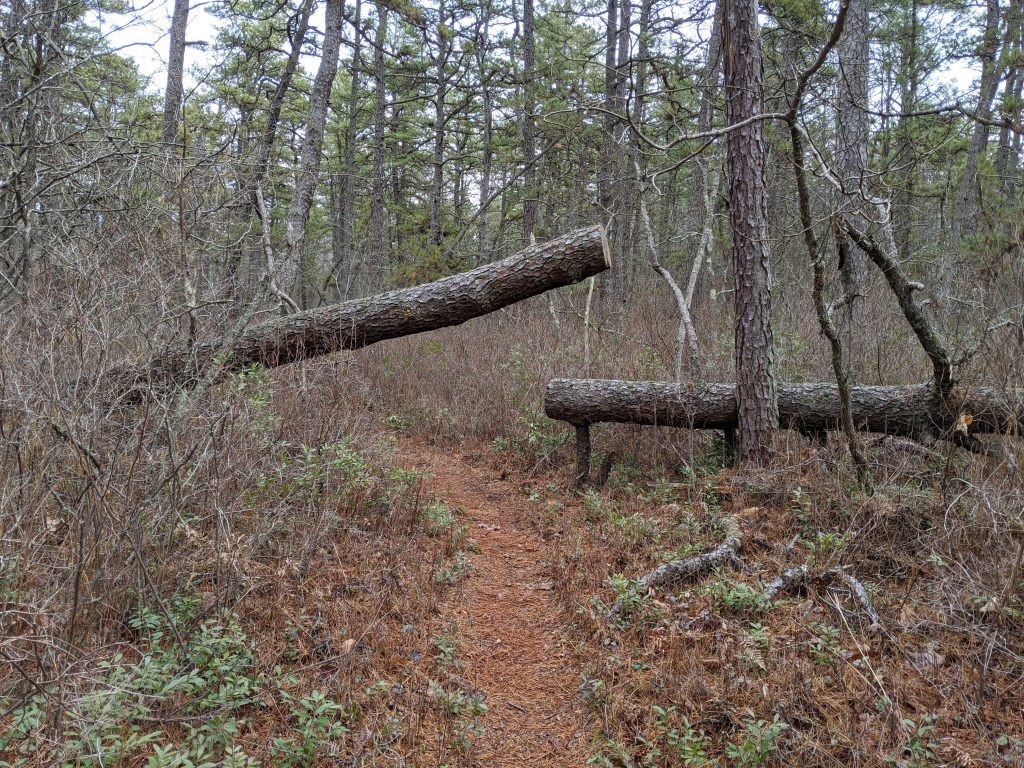 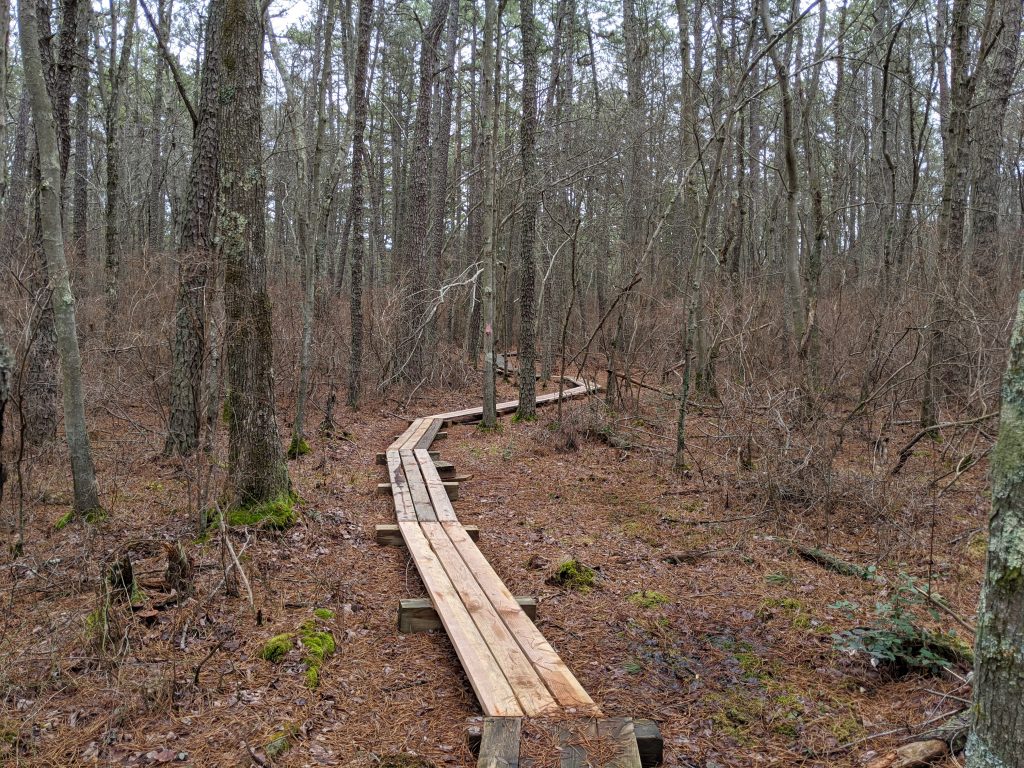 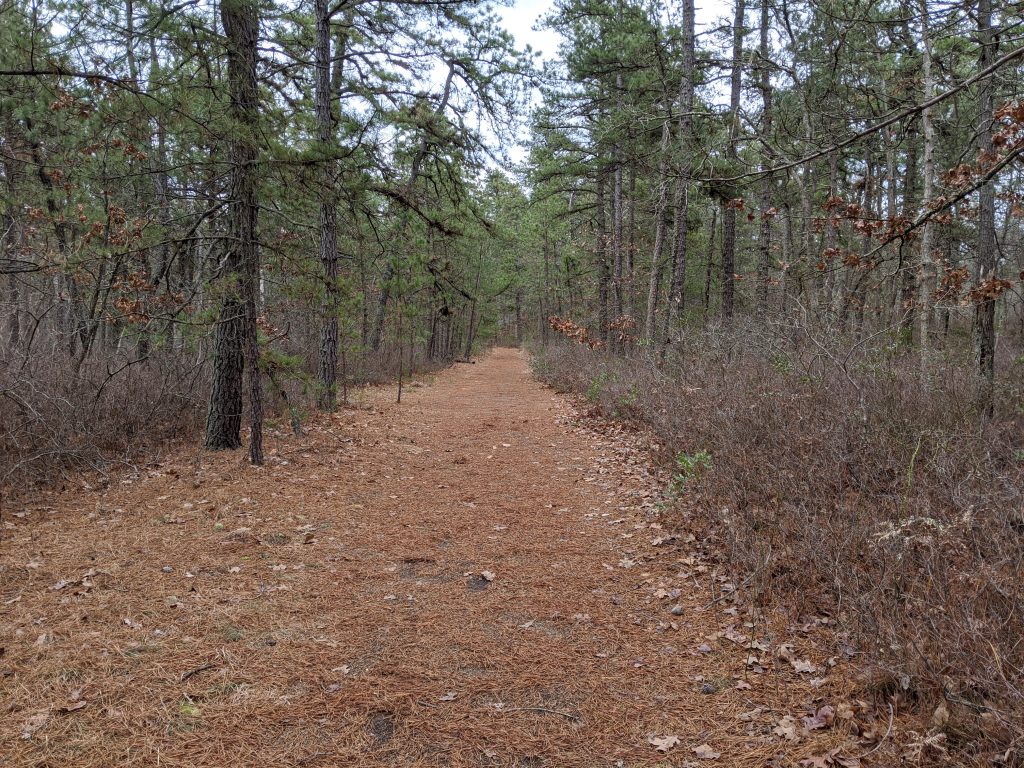 I took the Batona trail to Pakim Pond Day Use Area, which, believe it or not, had people enjoying a cookout.  In 40 degree weather.  Pakim Pond looked like a cool area to hang out in the summer. 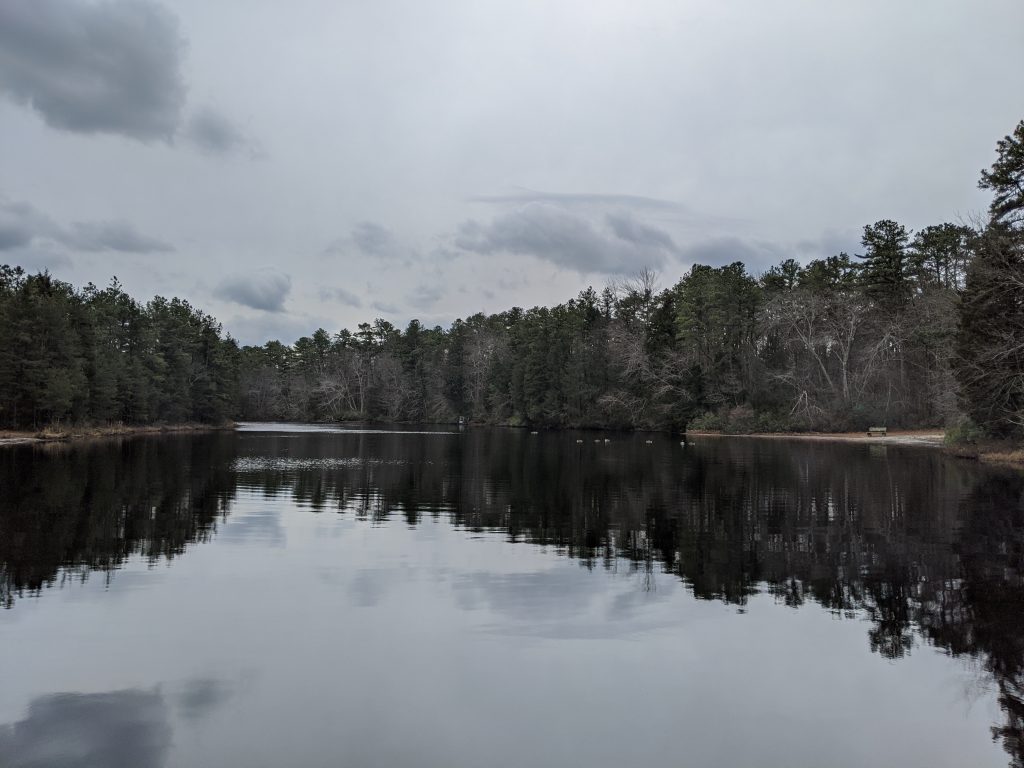 The next section of the hike was spent on the Mount Misery trail and the Lebanon trail, which is mostly a paved road through the forest.  It was at this point that the rain started, mostly as sprinkles.  But, it started to get dark, and the rain a little more intense, so I stuck to the Lebanon trail to shave off some time (and distance.)

I got back on the Mount Misery trail heading back to the park office.  Doing so took me through Reeves Cranberry bogs, which were really neat to see (even in the rain.) 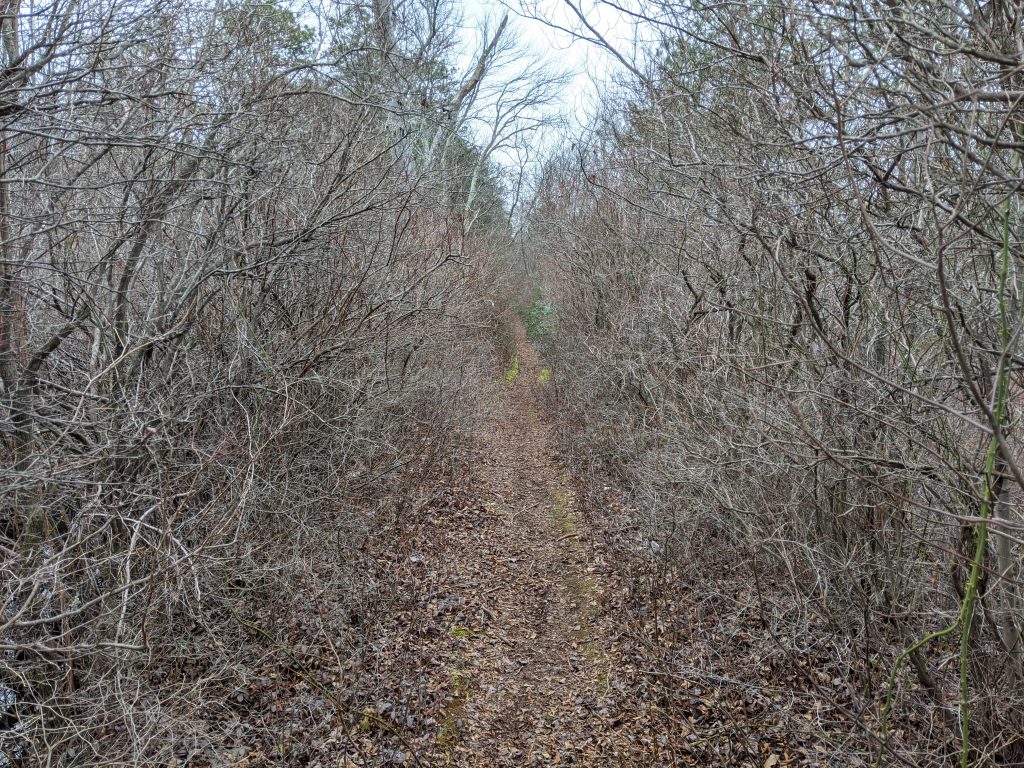 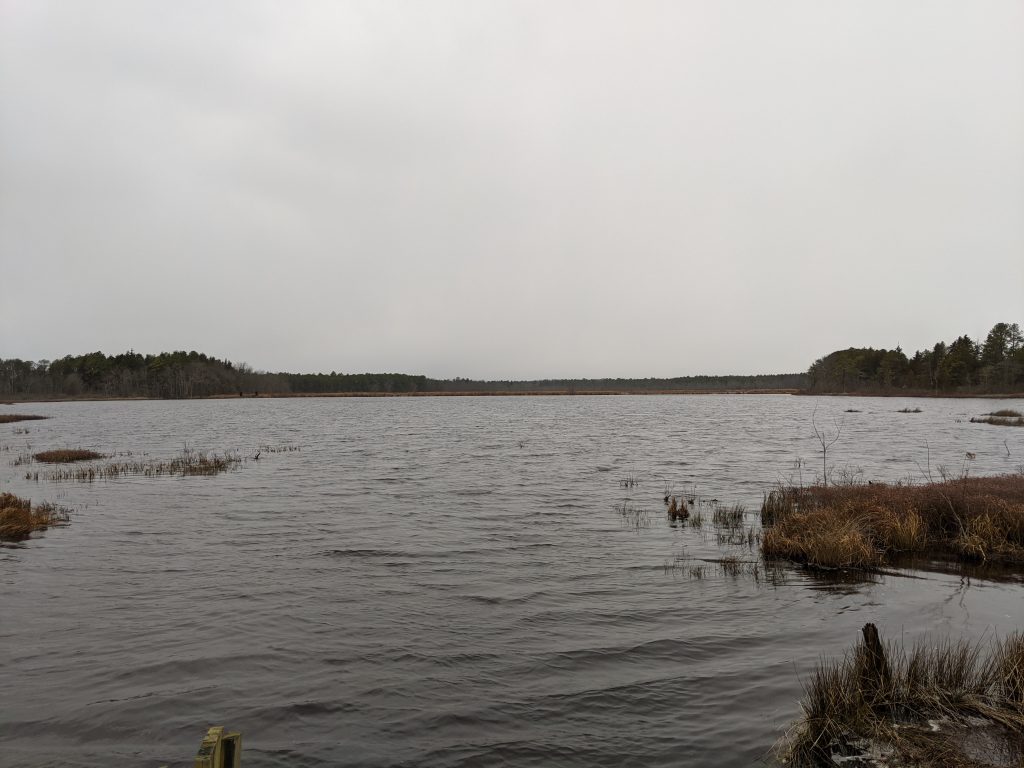 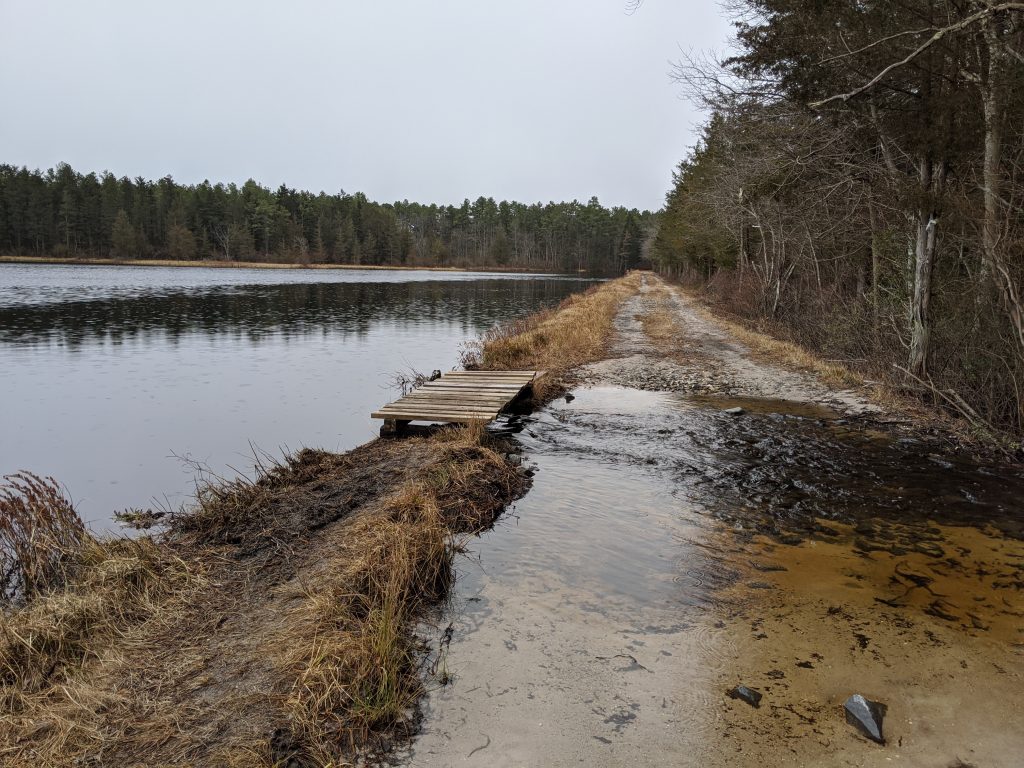 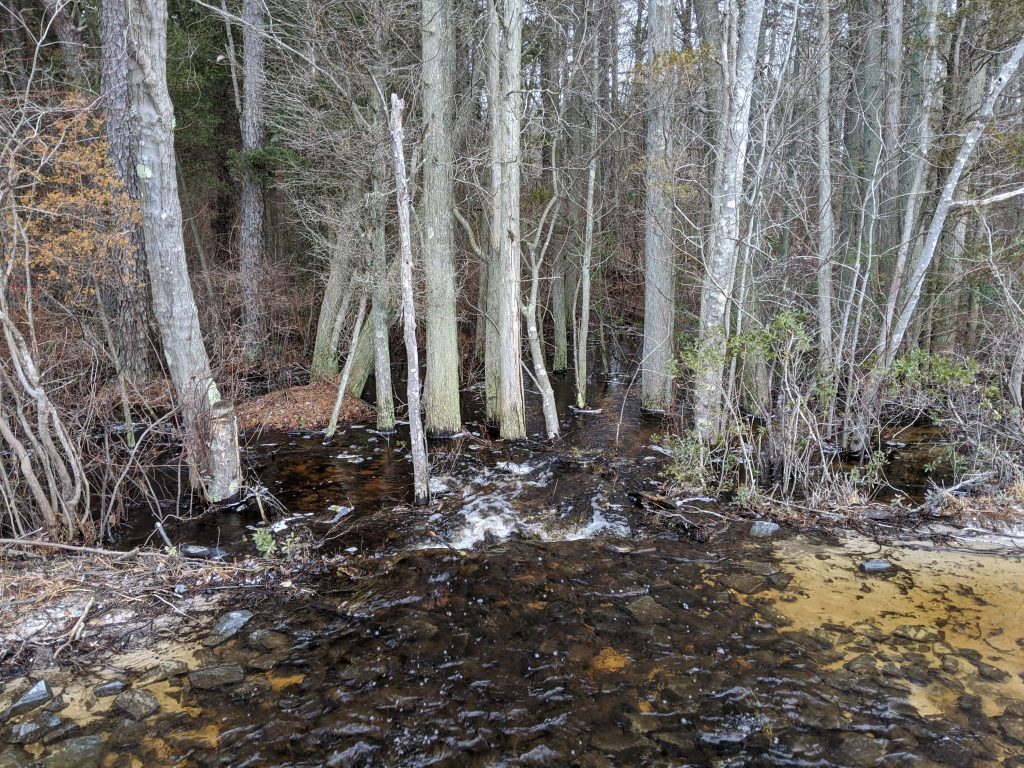 Finally, I was back on the Cranberry trail headed back to the office.  There was a portion of the trail that was wide, but forest close-in on both sides of the trail. 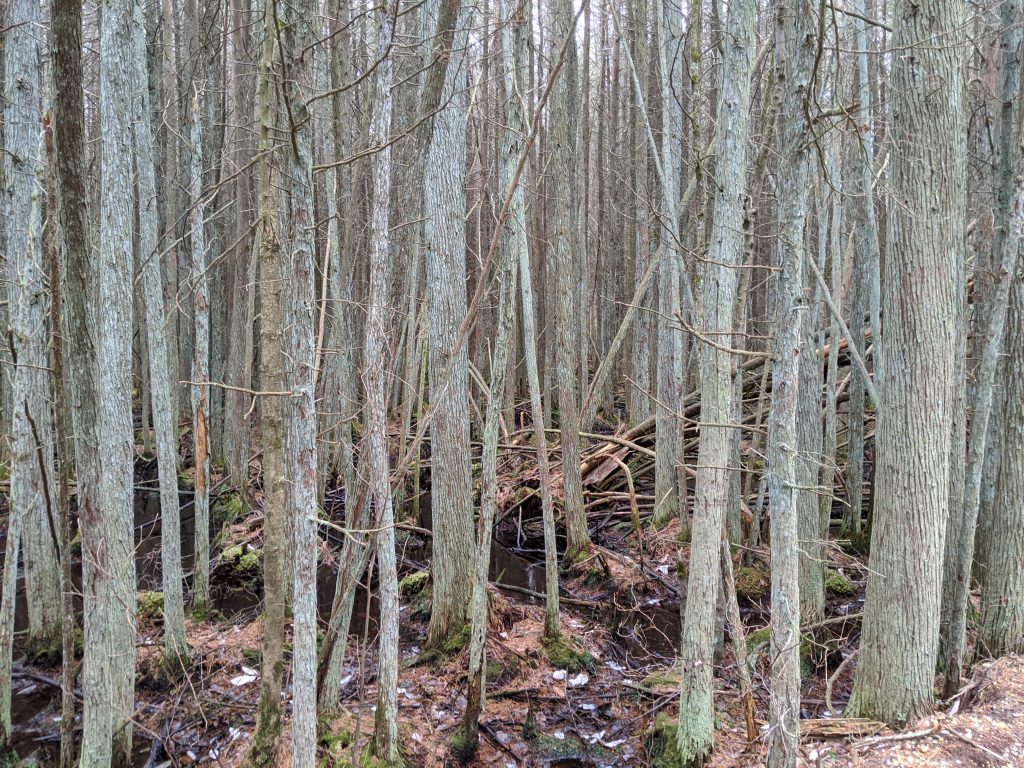 This was a great hike in the Pine Barrens.  There was no elevation change to speak of and the trails were a dream to walk on, loose dirt/sand usually topped with pine needles.  There were only a couple of locations with plenty of roots.  And, on the Batona trail there was a long stretch of boardwalk.  As it had rained the night before, there were a few sections that were a little spongy but nothing impassable.  The Lebanon trail is paved (for vehicles) most of the way, with one portion that is a dirt road.  The Park office wasn’t open (it was a Sunday) so I would like to come back and see what the office had to offer.

Connector trail to the Batona trail: 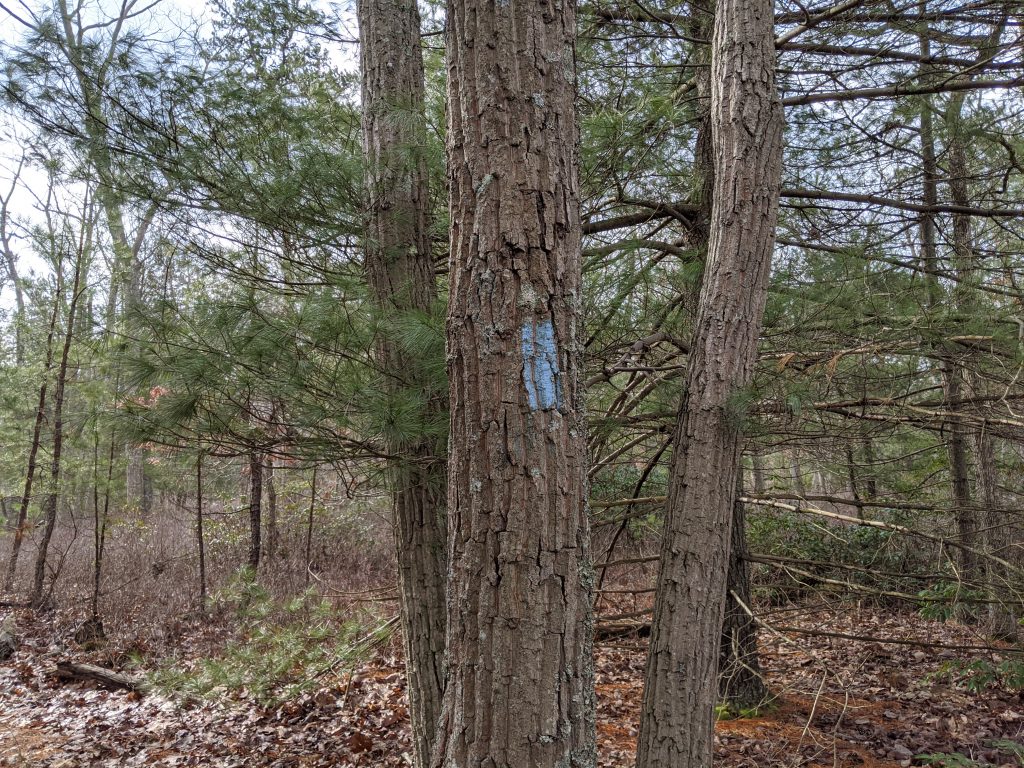 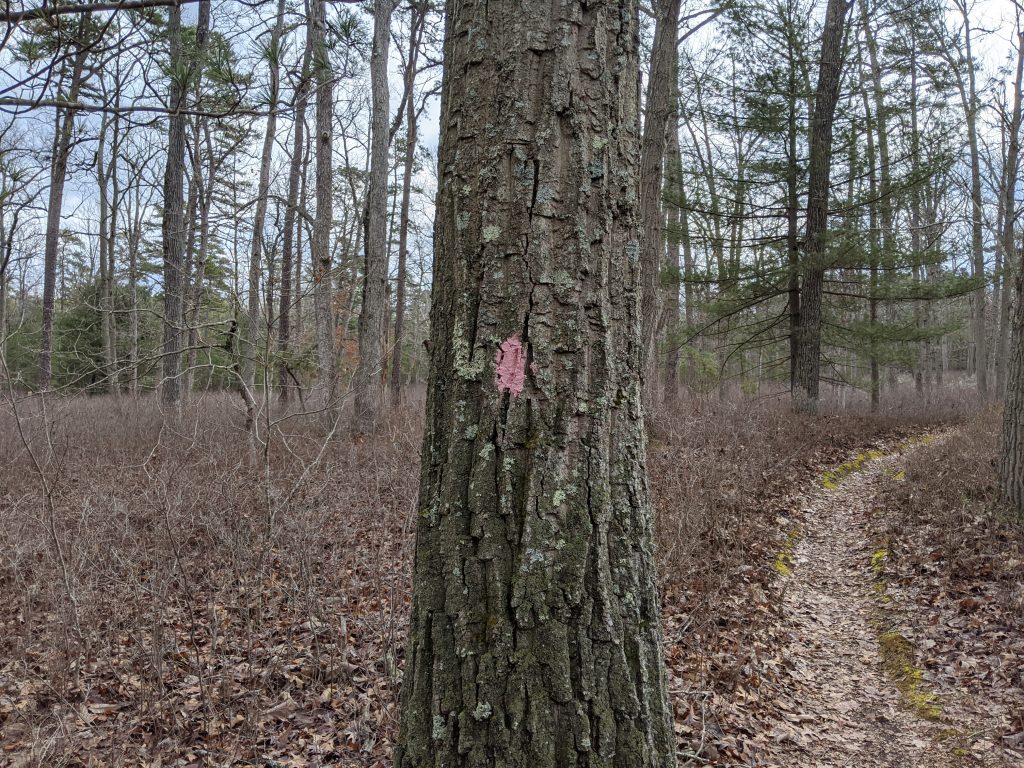 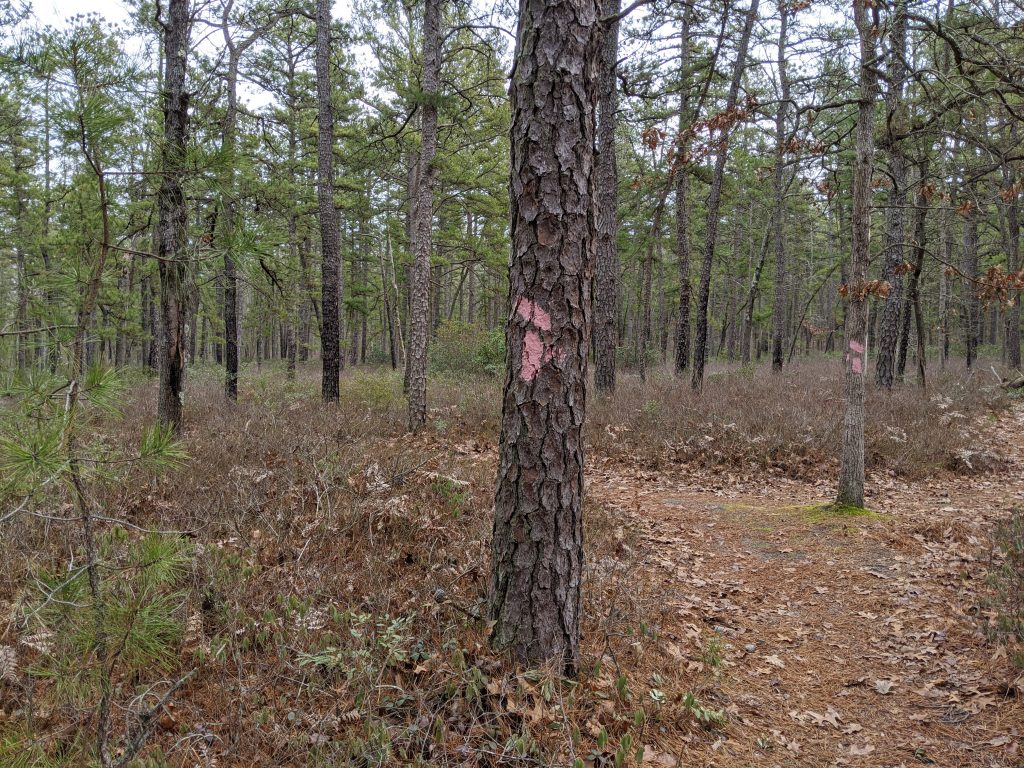 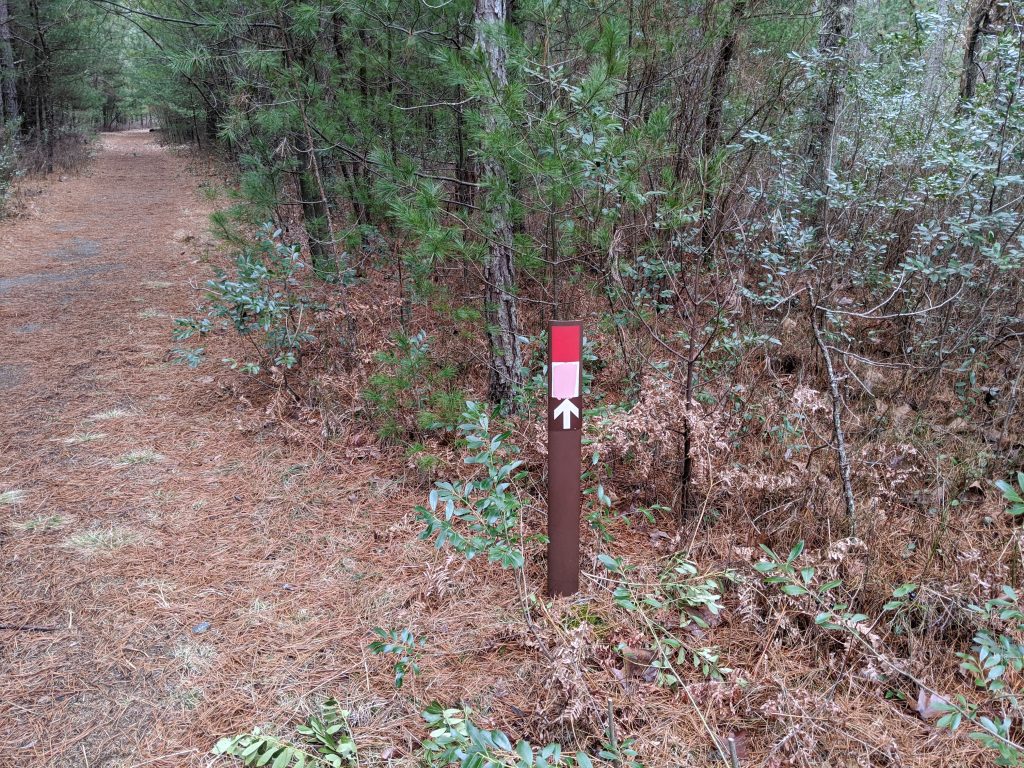 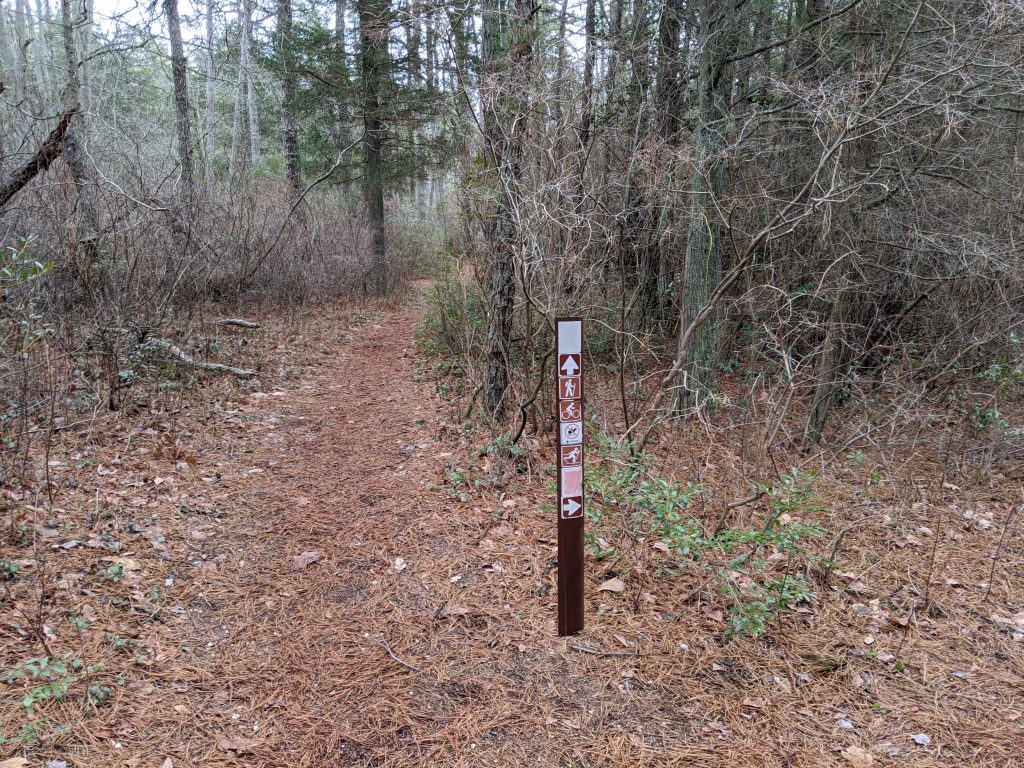 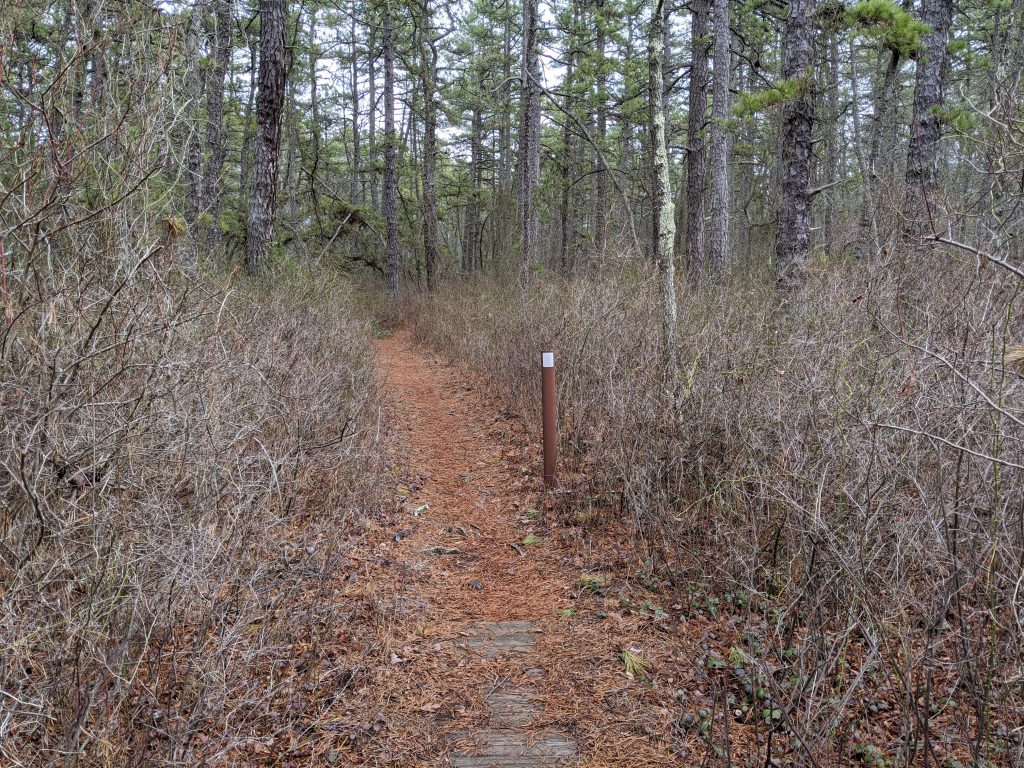 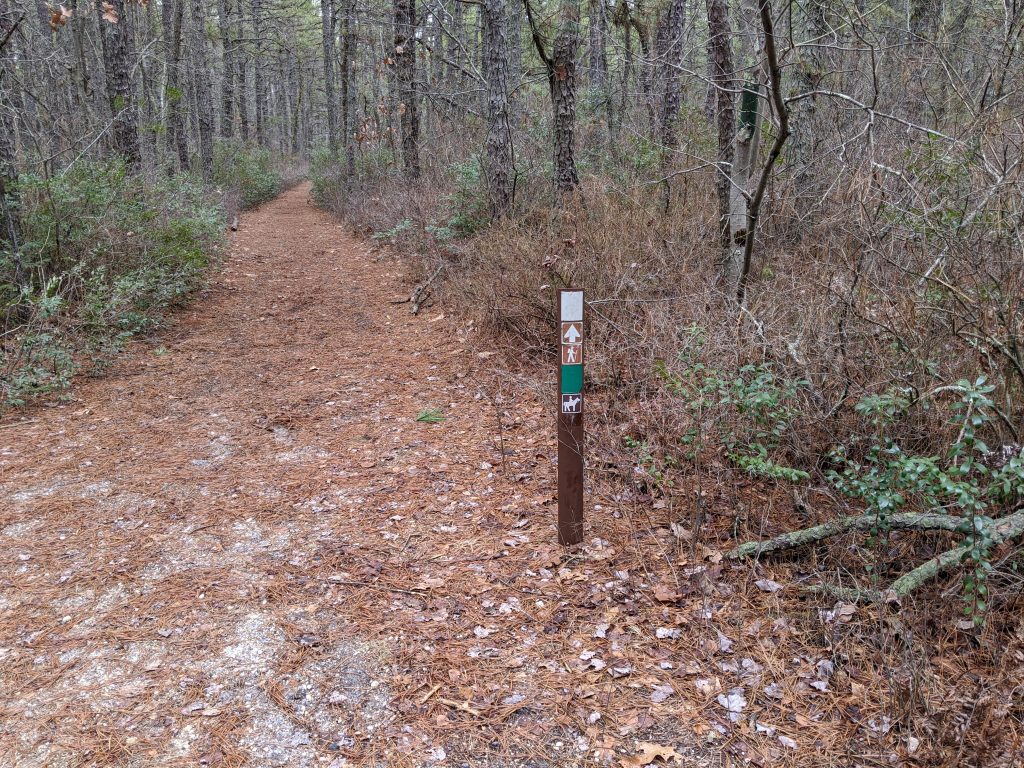 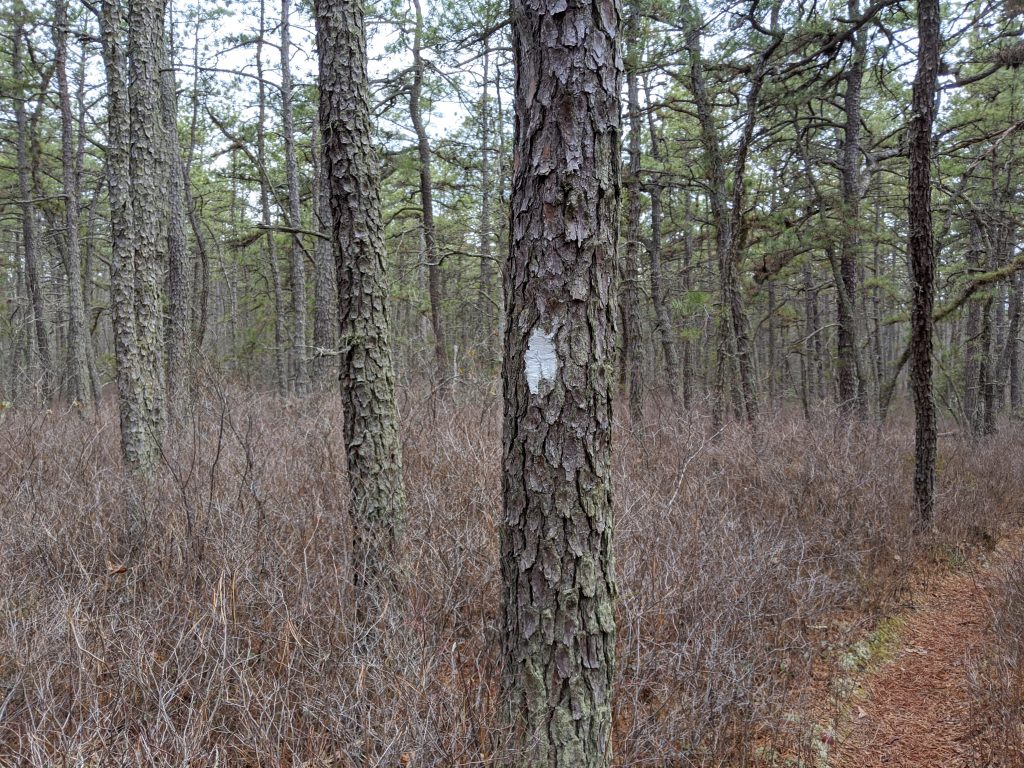 One of two blazes I saw for the Lebanon trail: 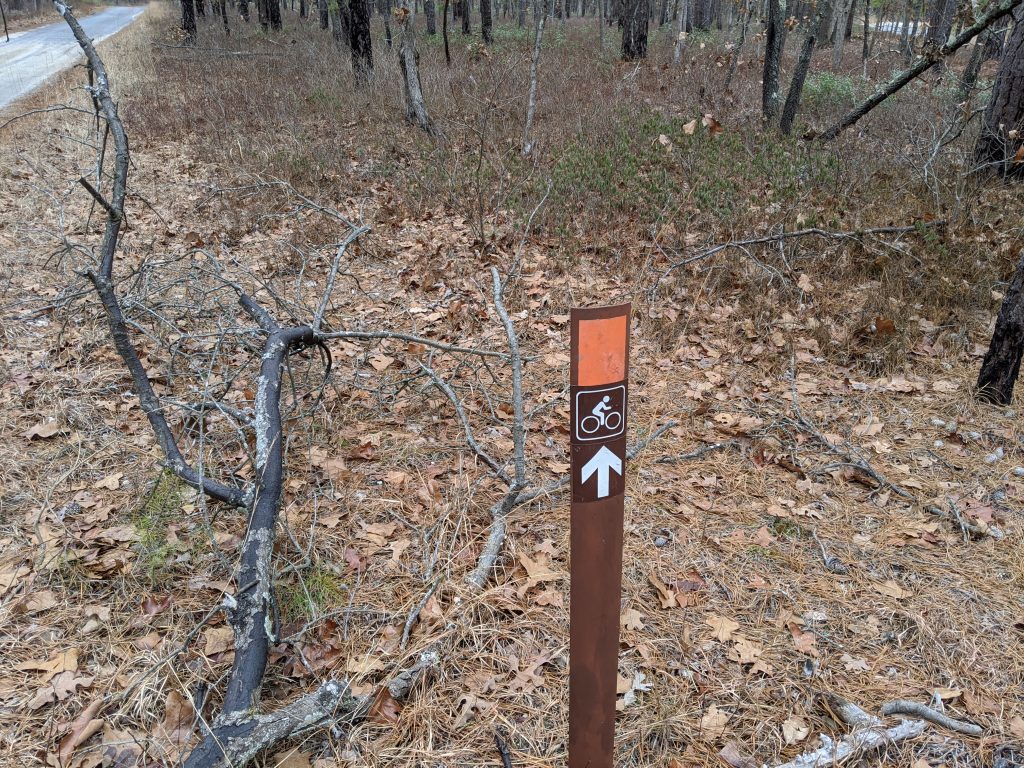 I have no idea what the heck this one is, it wasn’t on ANY map.  I saw a second one too.  Anyone who knows, leave a comment. 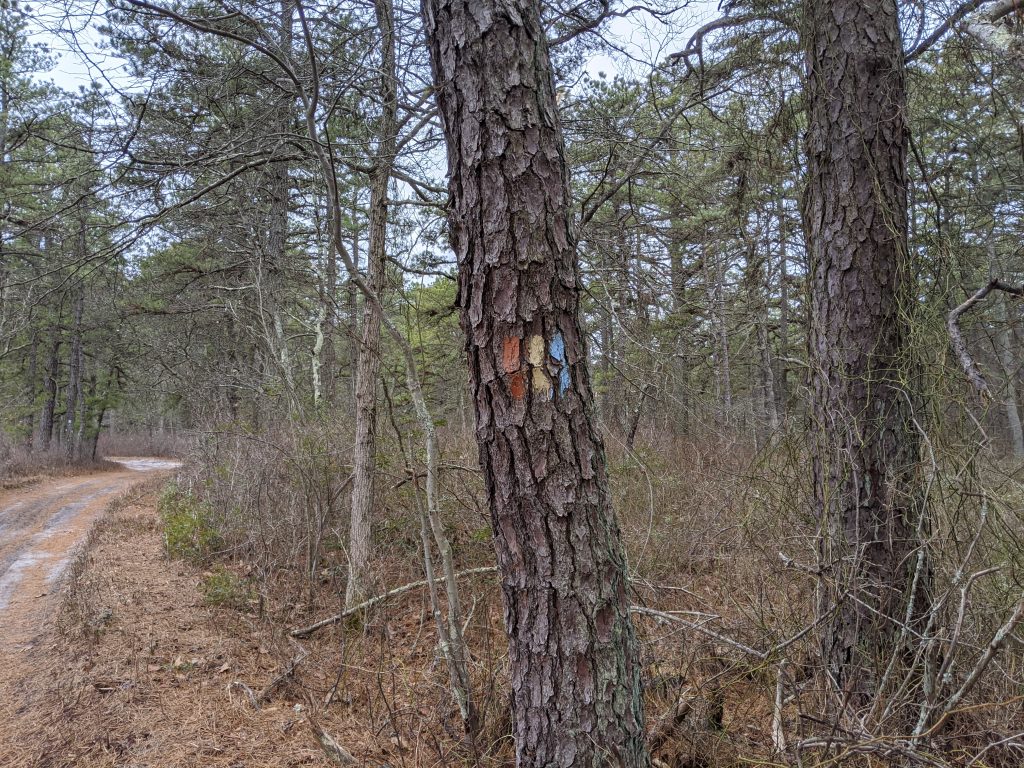 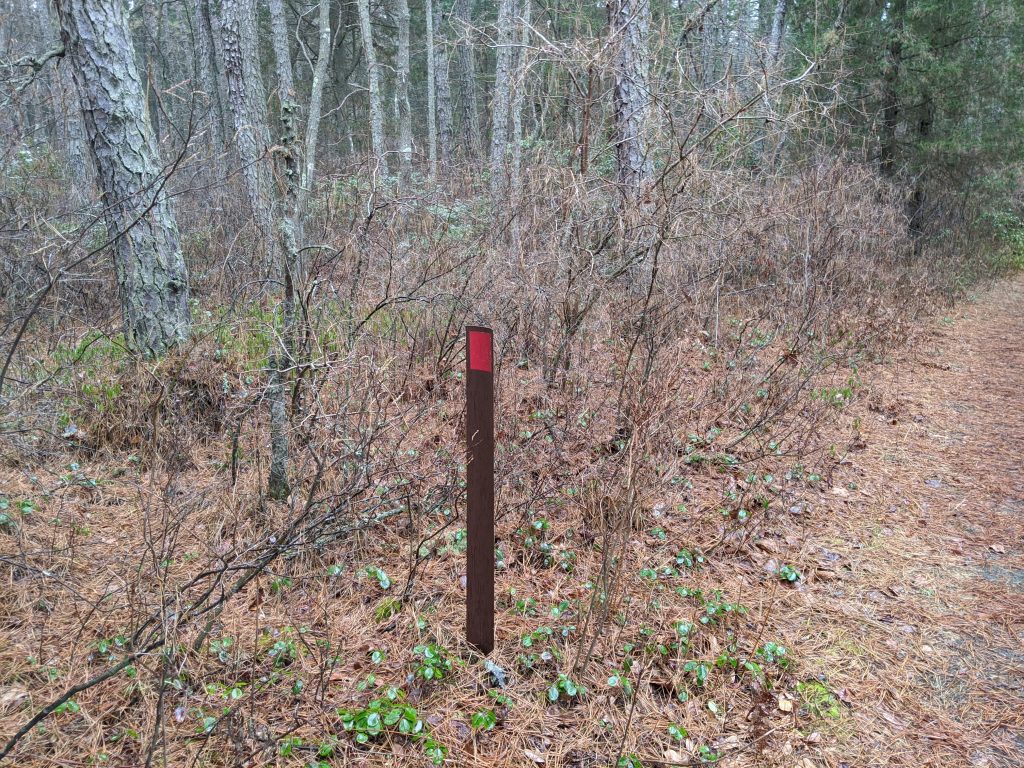 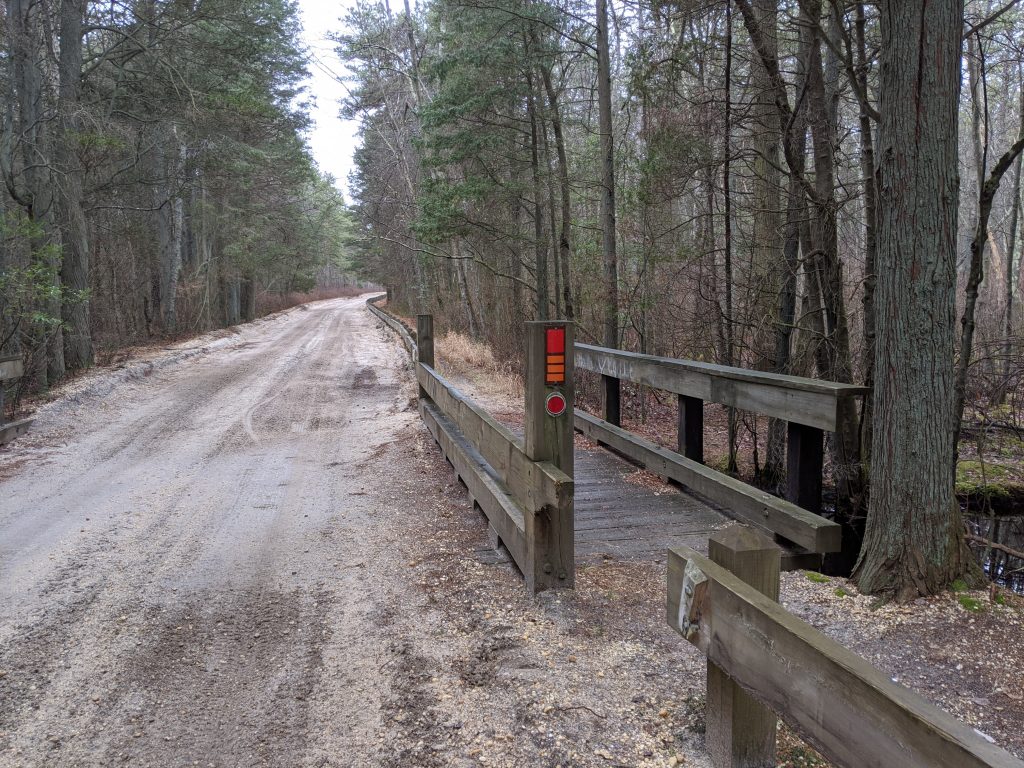