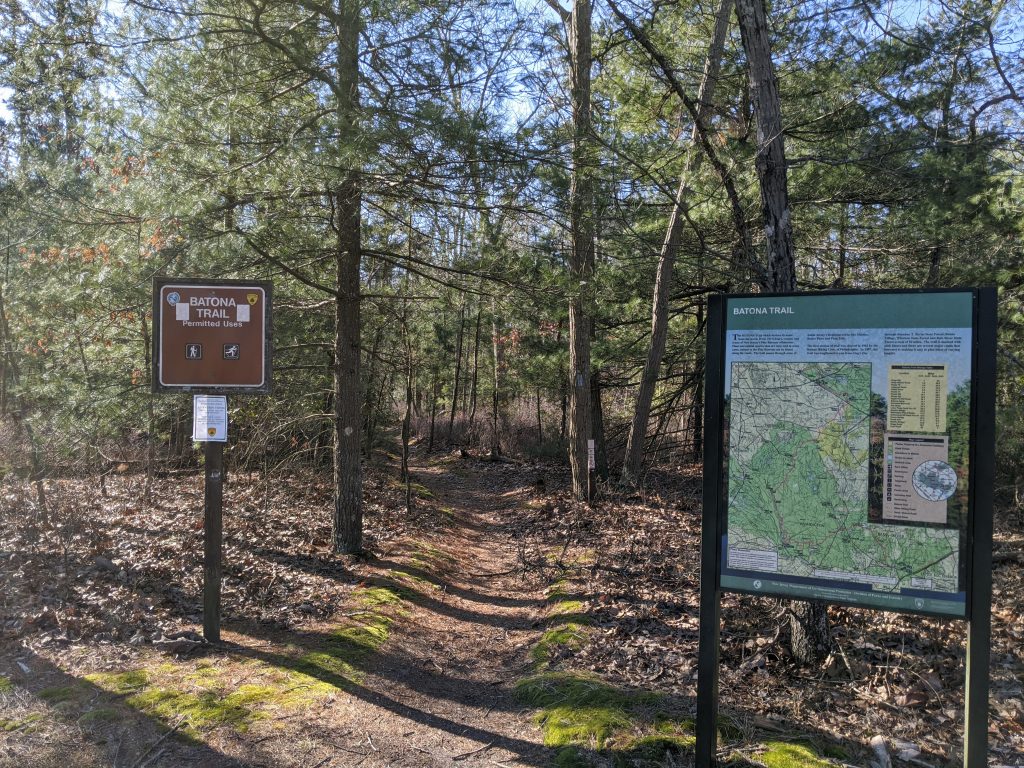 Back to Brendan T Byrne for another trail in 50 Hikes in New Jersey.  Today was a much better day, gorgeous sun, and not a cloud in the sky.  It was 33 when I got out of the car, and 42 when I returned with a light wind blowing the whole time.  Though, I didn’t notice it much as I was in the trees.  As I mentioned in my previous post, I’m not likely to backpack the whole trail, there are some other sections I might do; but I wanted to come back and do this section.

The trails were the of the same makeup, soft dirt, covered with pine needles or sandy roads – truly great to walk on. 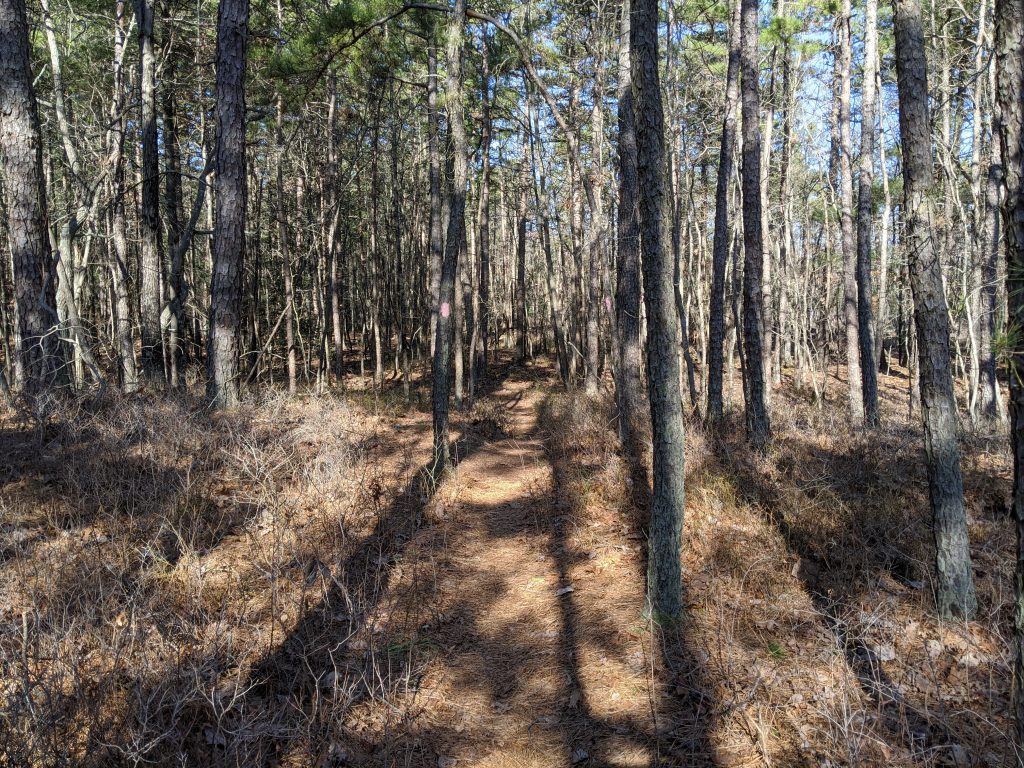 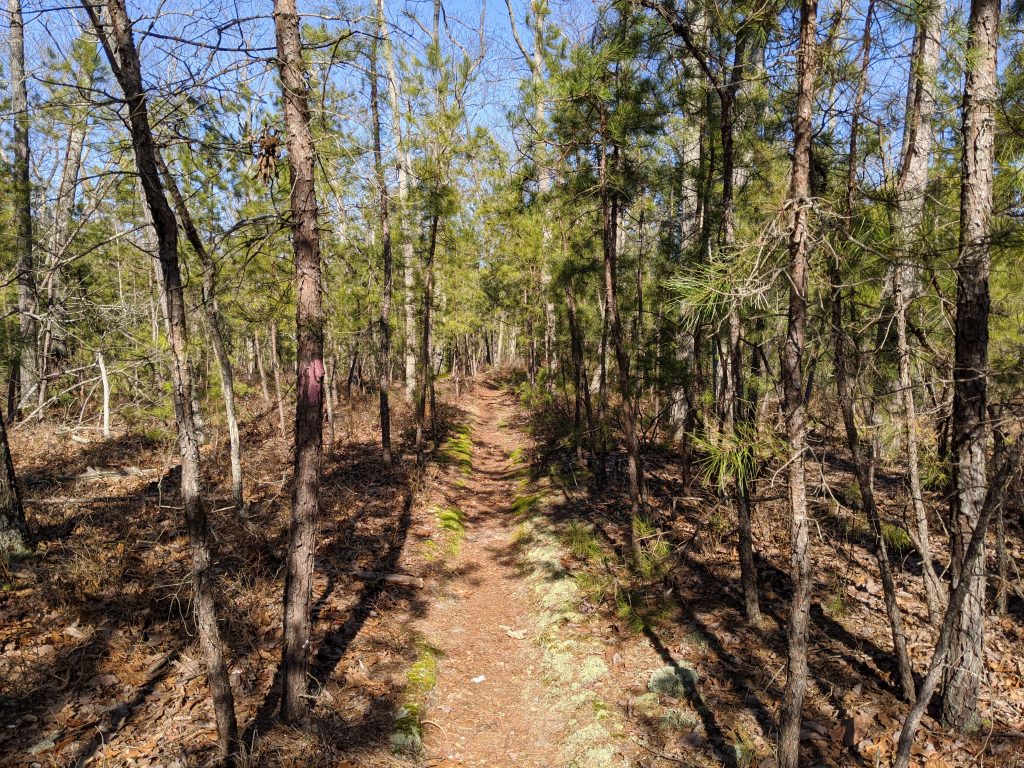 Be aware that walking this portion of the Batona Trail does cross over some busy roads, though early on a Sunday morning I had no difficulty and saw limited traffic.  Two paved roads in particular to cross are Route 70 and Four Mile Road.  Within the forest there are numerous woods roads, unmarked trails and sandy/dirt roads that you will cross and are not on all maps.

After crossing Route 70, the first feature you will come to is Deep Hollow Pond.

The trail meanders generally to the northeast, almost parallel to Bisphams Mill Creek.  There was no place that the trail actually goes to the creek, so my pictures had to be through the brambles.  You wouldn’t be able to see the creek in the summer with the foliage out. 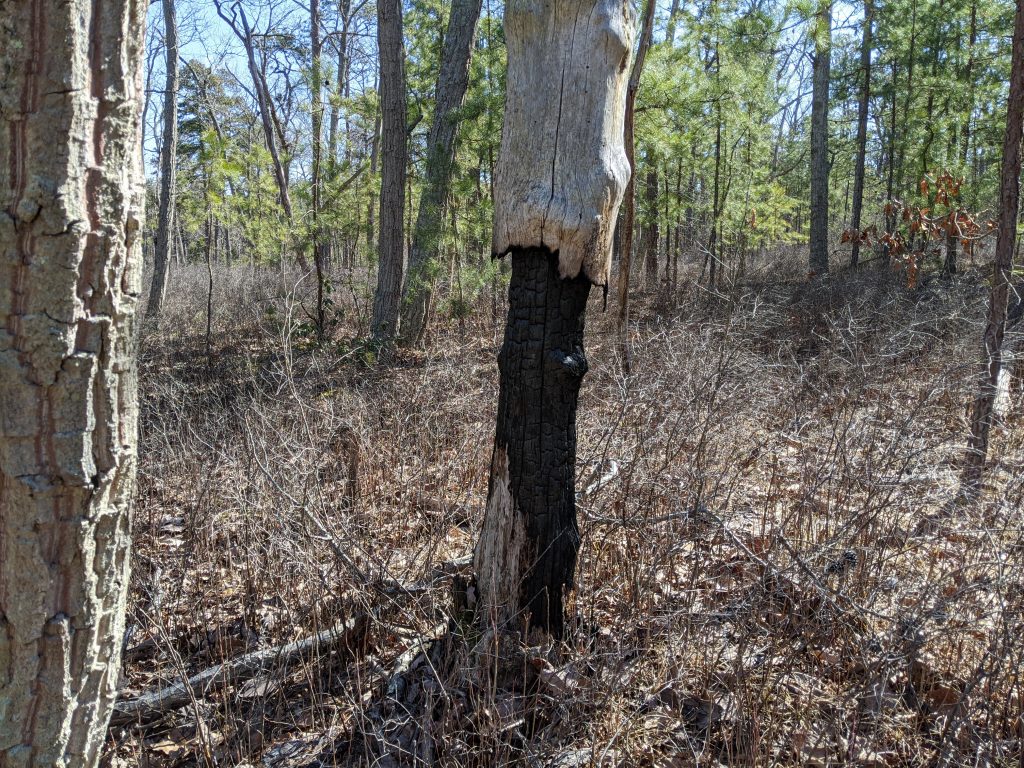 On a day like today, you could walk and walk.  I saw a couple of people running on the trail, and towards the end I met a couple with two dogs on leash.  Supposedly, bikes are not allowed, but there is definitely evidence that bikes use the trail.  Fortunately, I did not run into any.  On the way back from Ong’s Hat, I heard a motorbike, but I never saw it.  The only other noise to be heard were the cars on the roads you cross, and traffic on Route 72 while the trail is close by. 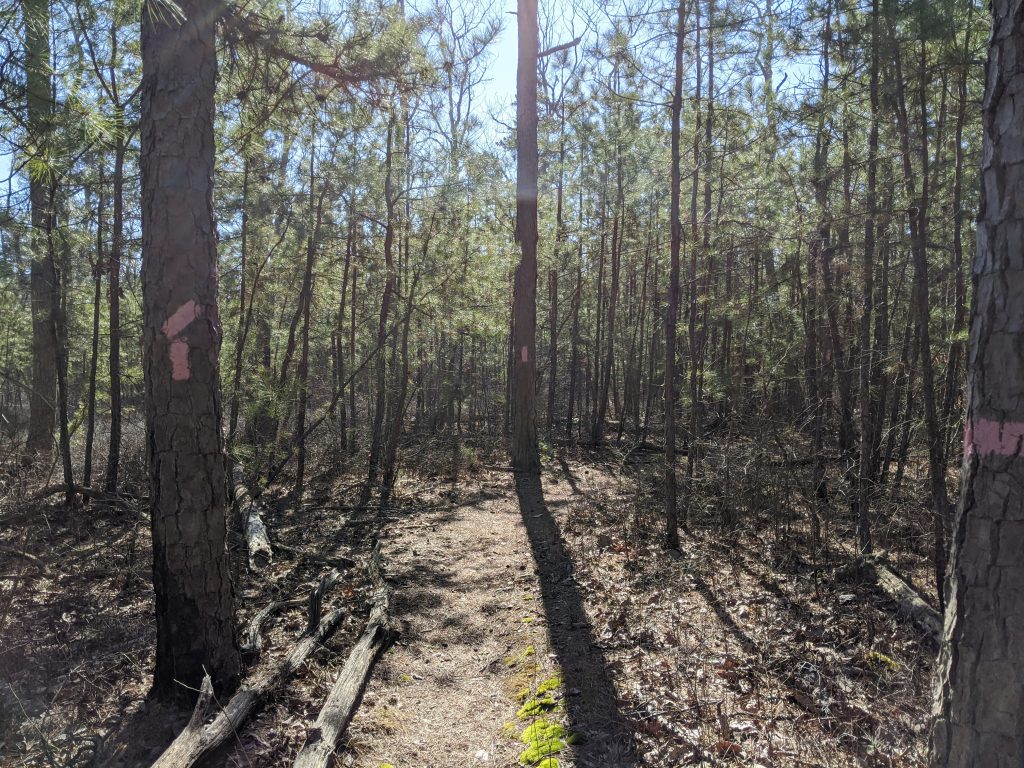 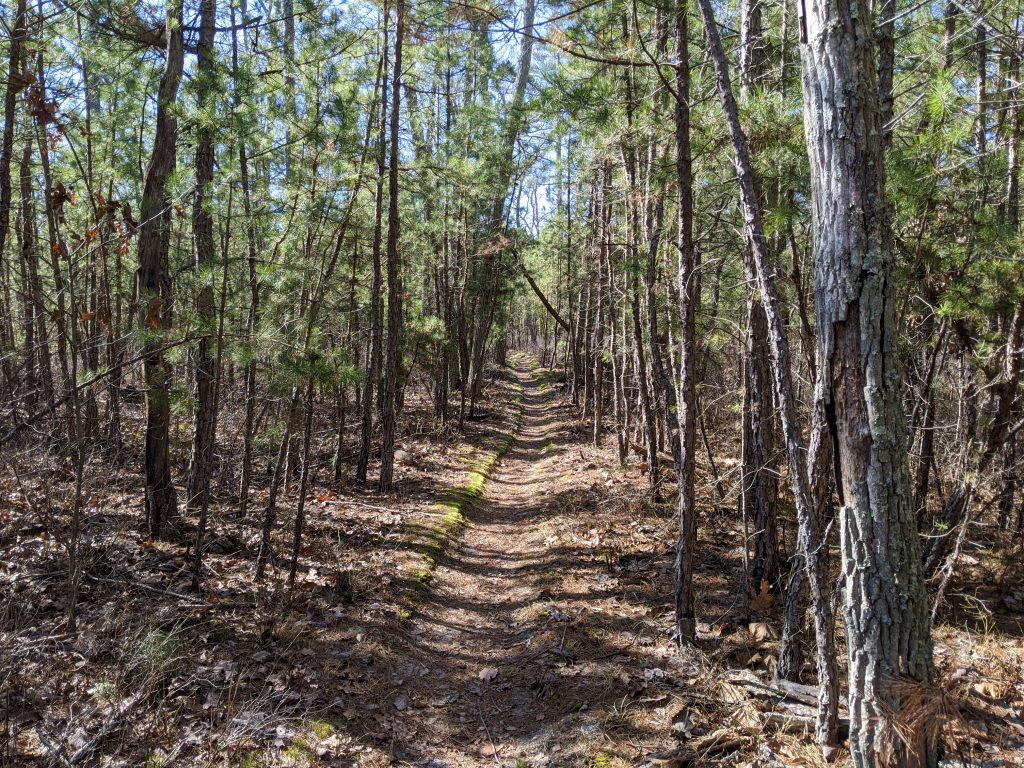 There is a spot where you have to cross Four Mile Road.  On a Sunday morning, there was no traffic.

Finally, I reached the northern terminus of the Batona Trail, located in Ong’s Hat. 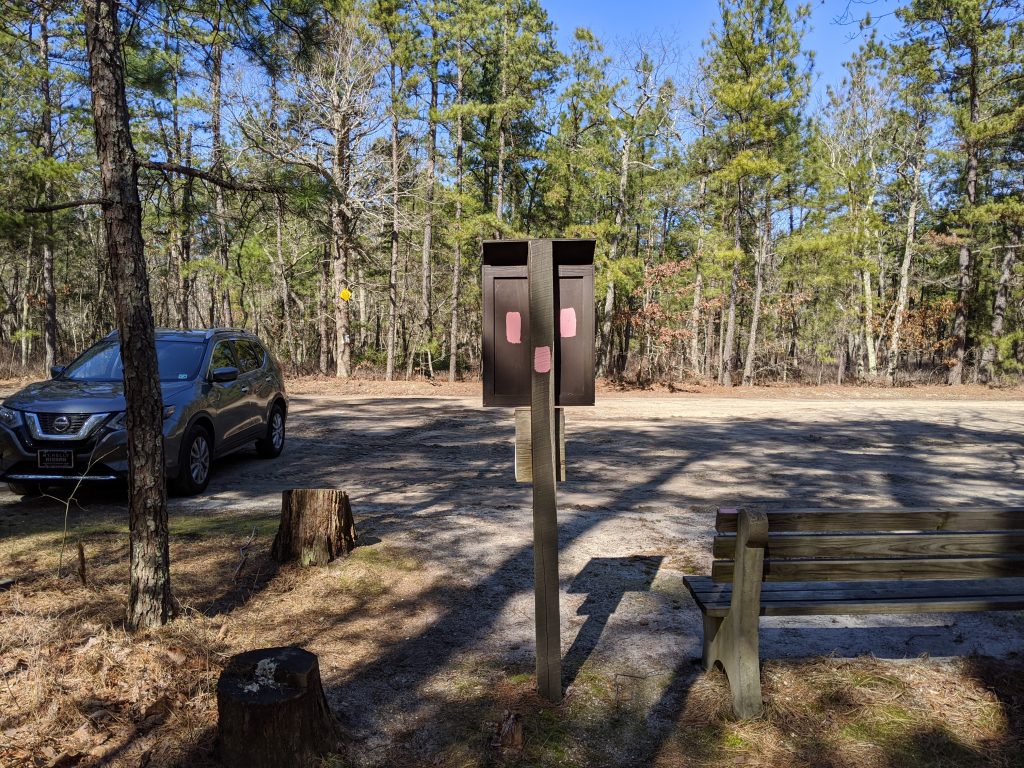 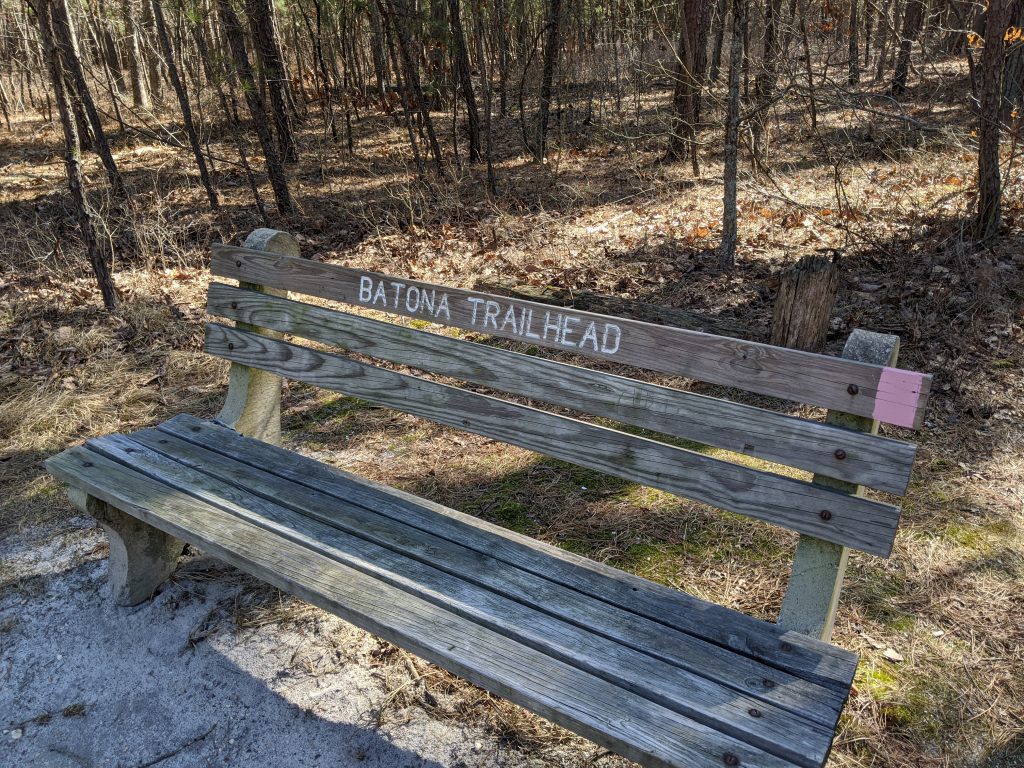 What is Ong’s Hat?  I’ll quote from 50 Hikes In New Jersey (second edition):

The story begins in the early 1700s, when Jacob Ong built a tavern here.  He was a Quaker from Pennsylvania who apparently strayed from the steady course and took a liking to dancing and flirting.  The tavern, which made an excellent halfway stop for stagecoaches travelling between Philadelphia and the Jersey Shore, soon became the scene of some wild goings-on, and in 1715, the history-making event occurred.  Jacob got in a fight with one of his girlfriends.  In a jealous rage, she grabbed the hat off his head and thew it high into a huge oak tree beside the tavern.  For years the hat remained caught in the high branches, and passersby would frequently say, “Look, there’s Ong’s hat.”  It took a while, but in 1828 the town got official recognition on New Jersey maps.  It is also shown on the USGS Browns Mills quad.  As for the tree, well, it was cut down in 1978 by the county highway department.

I walked around, I didn’t see any buildings or anything remaining of Ong’s Hat.  There was a deserted building across Route 72, but I wasn’t going to cross a very busy road to investigate.

On the way back, I took Shinns Road.  Straight.  Wide.  Sandy.

I passed a section on the right where you could see that the trees had been cleared out, and after a while, where the forest resumed. 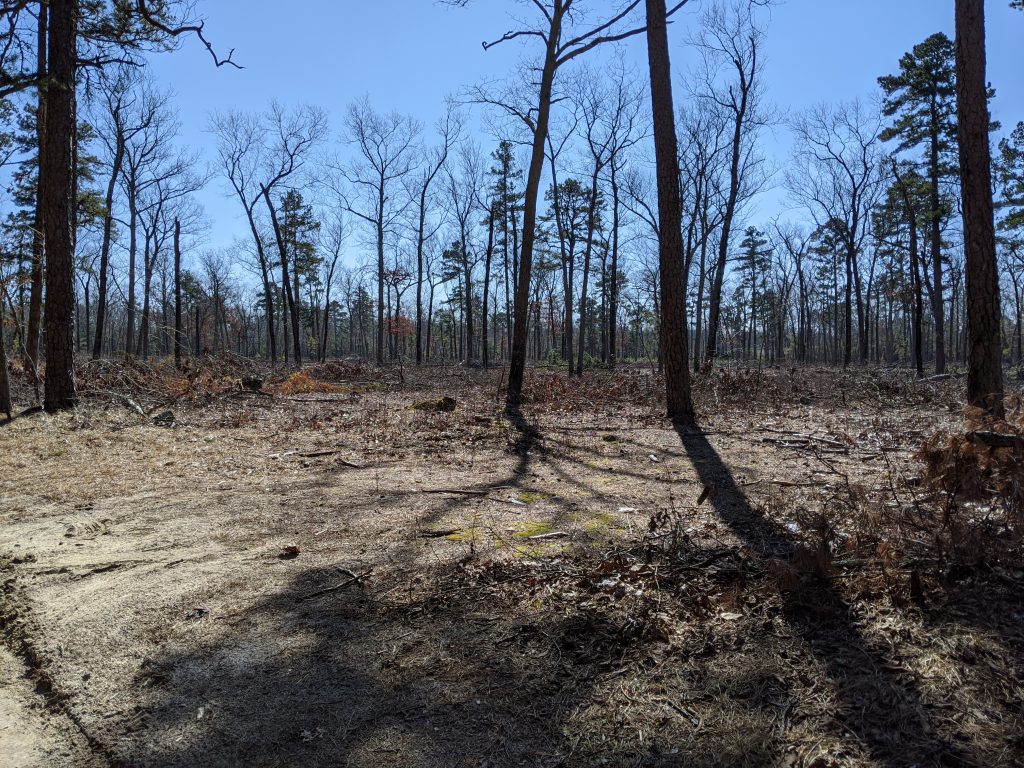 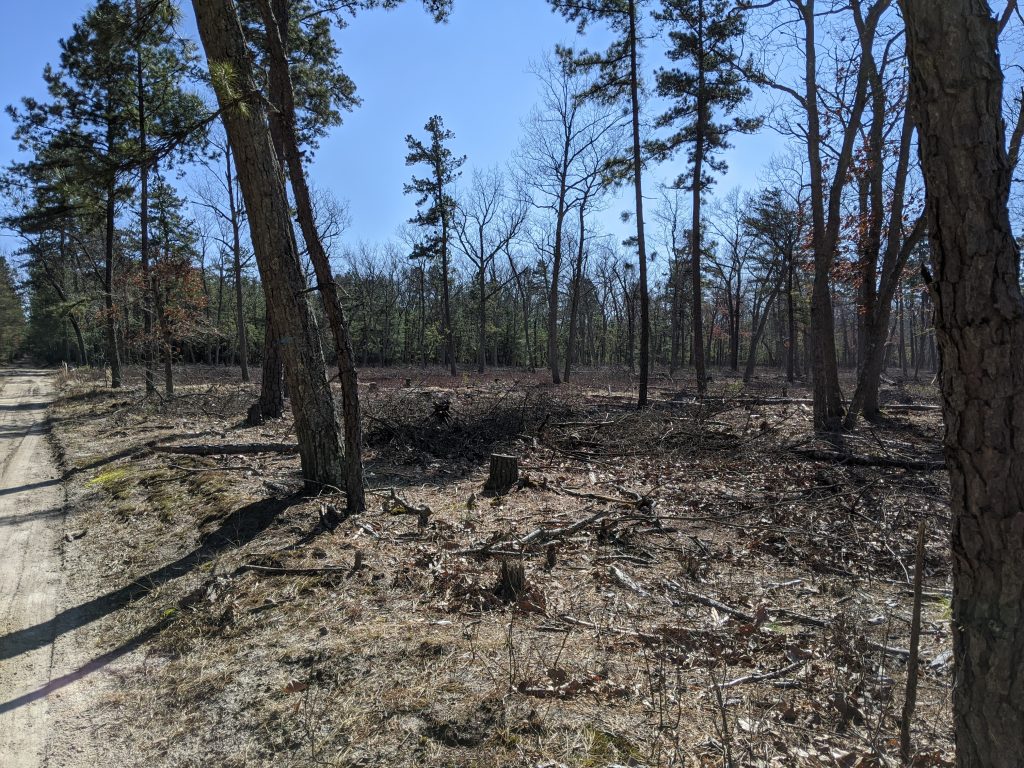 There were a bunch of spots along the Batona Trail where you entered forests of young trees, nature reclaiming its space.  The trees were close together, but not very tall.

Here’s a shot of (re)crossing Route 70 (early on a Sunday morning.) 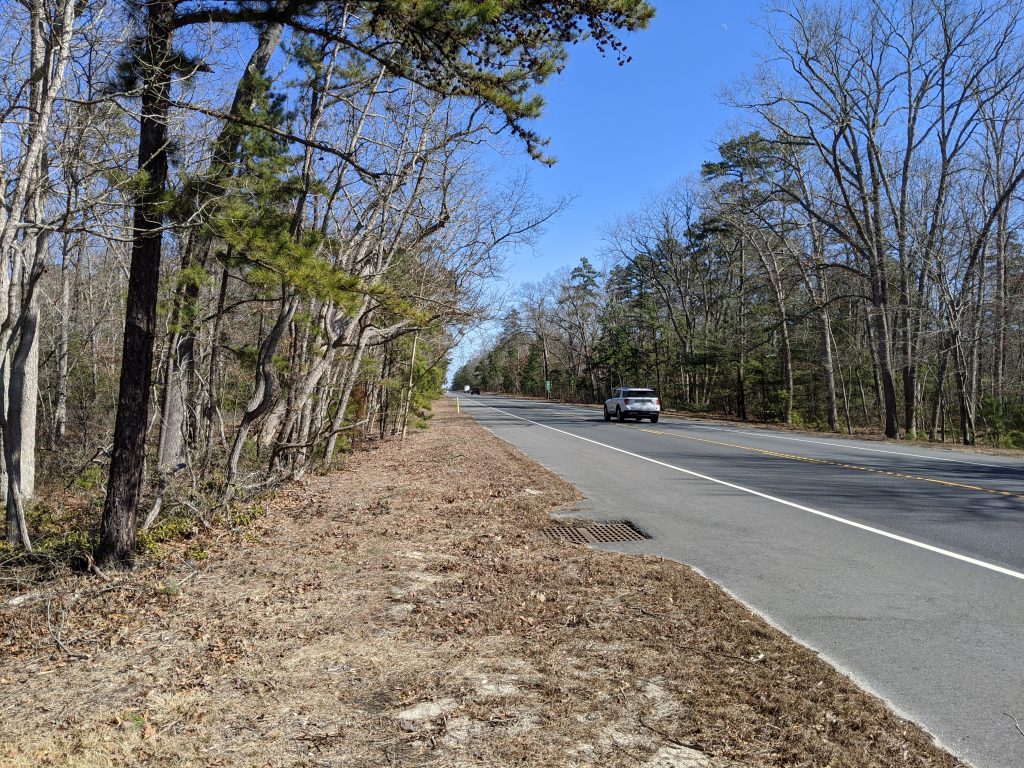 At the beginning of the trail I walked by the Lebanon Fire Tower.  On the way back, I investigated.  There was nothing preventing me from climbing the tower, I don’t know if the door to the room at the top was open.  I wasn’t finding out.  And it had nothing do with the sign saying “no trespassing.”  There was no way I was going up those stairs. 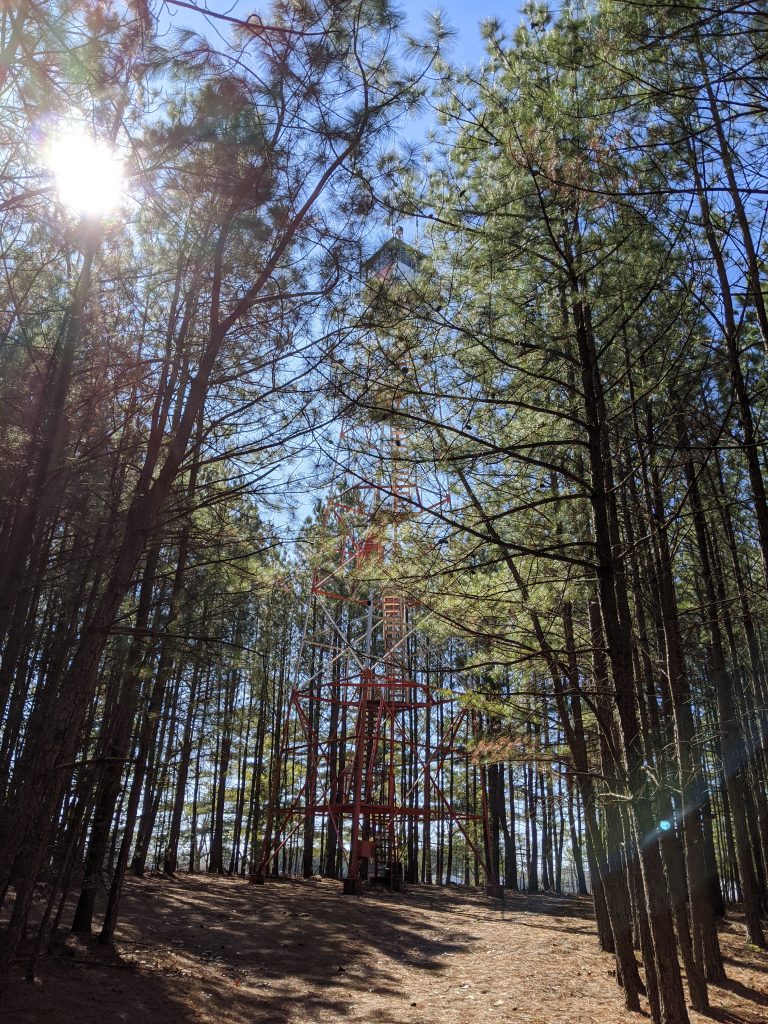 I had a great time on this hike; the weather co-operated which made the hike pleasant.  This would be even better in the Spring or early Summer as you are in the shade for much of the hike.  Highly recommended.