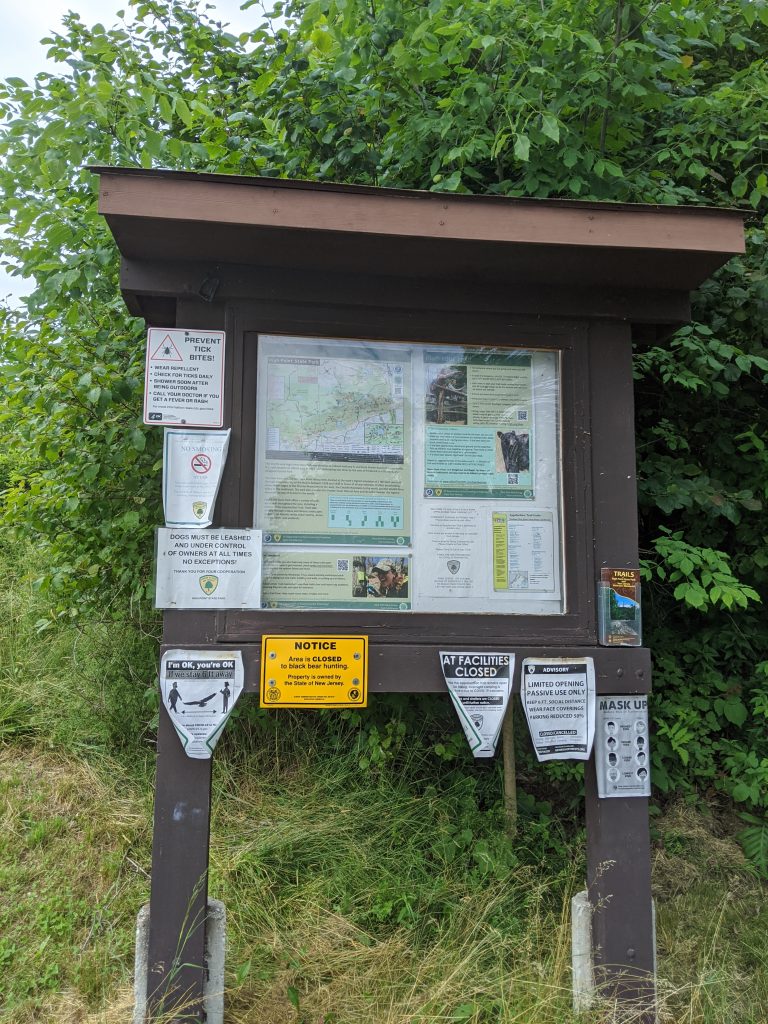 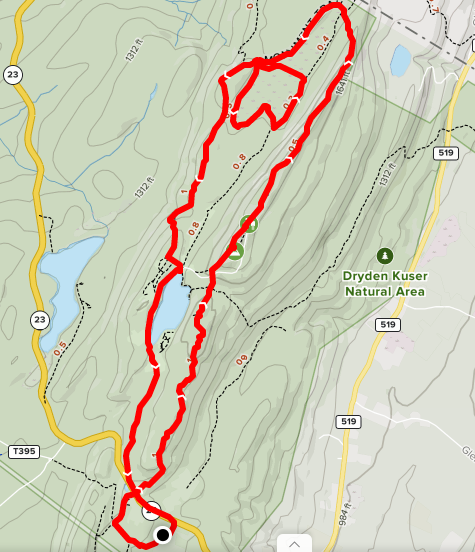 This would be some hike.  I believe that this would be the furthest I drive for a hike in New Jersey as this was a long drive; but a really nice day.  I had never been to High Point or the monument even though it is widely known.  The monument is not open due to the pandemic, it is unlikely that I would have climbed it even if it was open.  Forget the fact that I would have just come up a steep section of the Monument/Shawangunk Ridge trail, I’m not sure I could do the steps.

I started this hike at the Appalachian Trail pull off lot, which was good-sized and empty by the time I got there.  I took the connector to the Iris trail, which is part of the Appalachian Trail until Route 23 and the park office.  I was a little disoriented when I came to Route 23 as I knew I had to cross the road, but I wasn’t sure where the trail picked up.  It became very obvious. 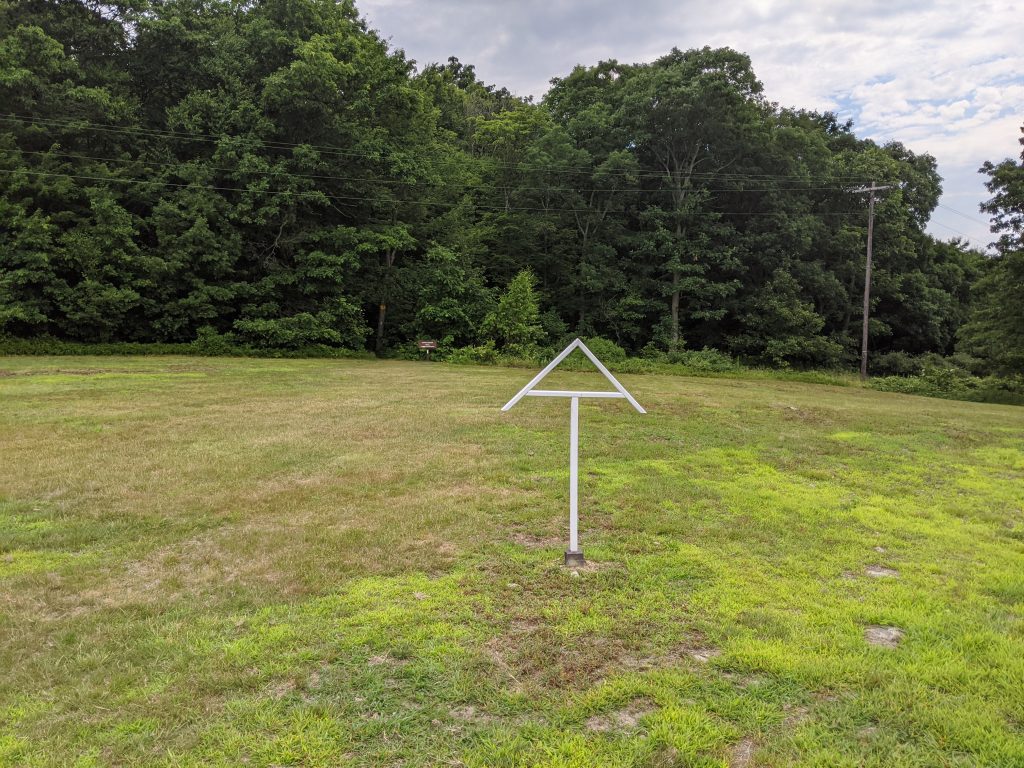 The next section on the Appalachian Trail was pretty strenuous, and I was beginning to think of the other week at Apshawa.  Lots and lots of rocks.  And some pretty steep sections as well.  I usually hike in long pants to keep the ticks/bugs off me.  They are the pants that zip off above the knees to convert to shorts.  It was pretty warm, around 85, and somewhat humid; I considered zipping them off when I got to the monument for some relief.  I found the observation deck on the AT and rested a moment before the next leg – which consisted of a descent into a small valley, then a hike uphill to the monument. 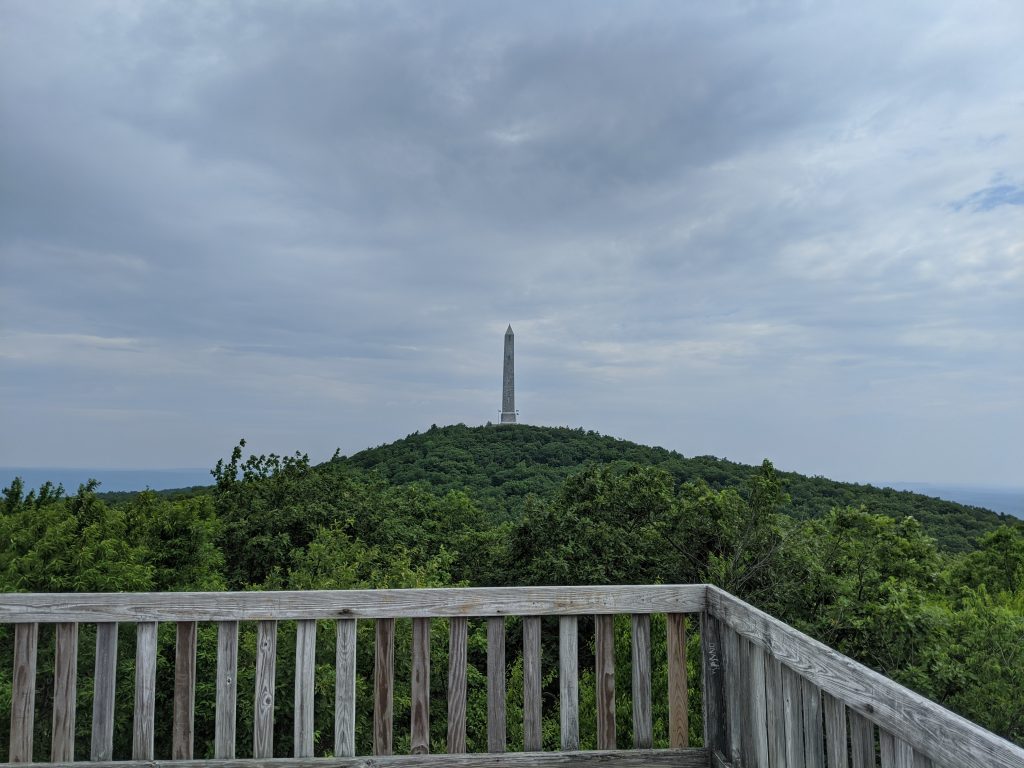 The Appalachian Trail will meet the Monument/Shawangunk Ridge Trail, and that’s where I left the Appalachian.  There is one section of this trail that runs straight uphill to the back of the monument.  The rest at the top was totally worth it.  It was here that I thought I would convert my pants to shorts, but after sitting for a few minutes I started to realize it was a little chilly.  It’s a perfect spot for a snack and by the time I had finished eating, people watching, wandering around the monument I was cooled off.  I took a picture looking back at the observation deck. 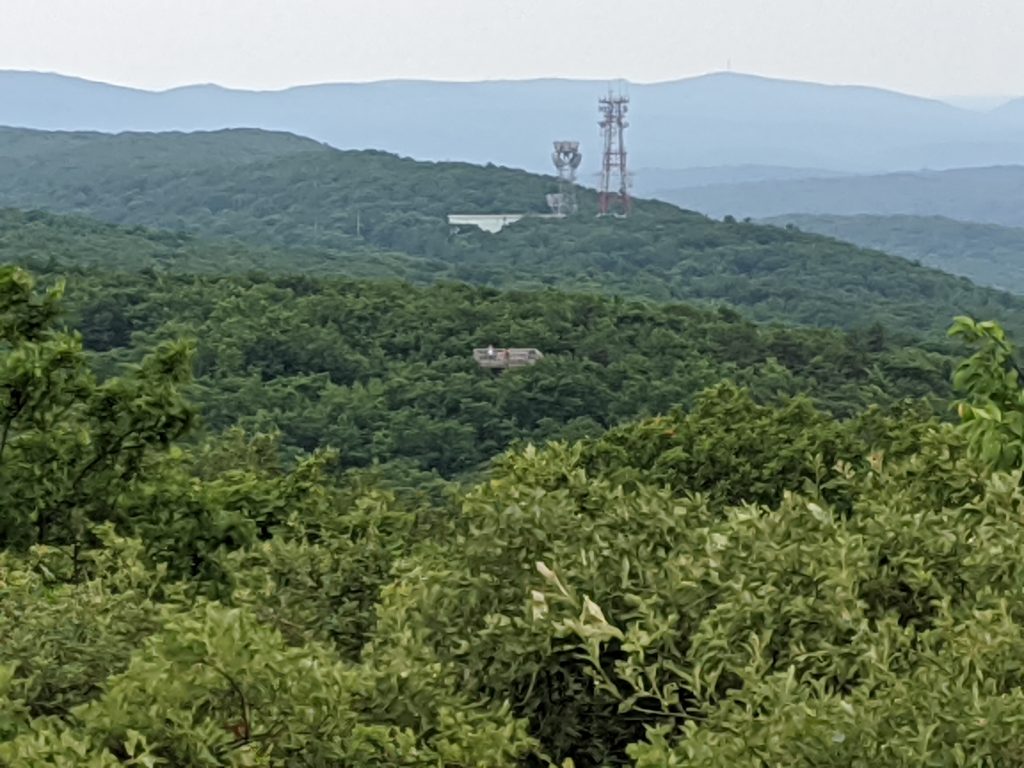 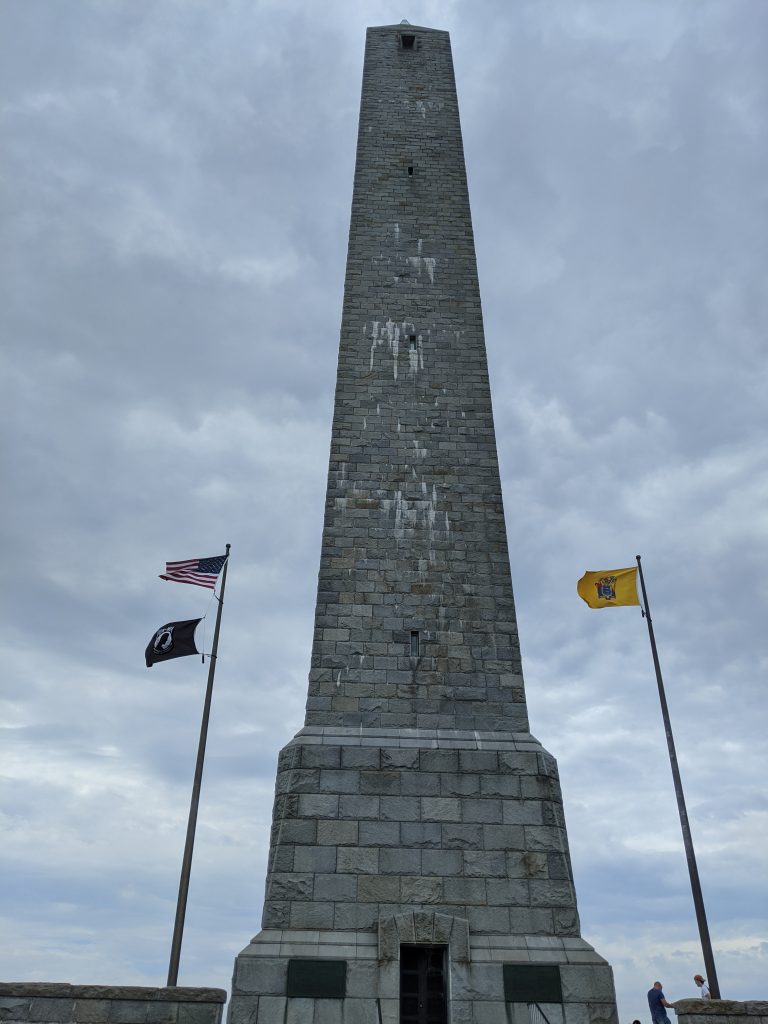 Be advised that there is a parking lot about 100 yards from the monument and it gets crowded.  I know I got some looks from people as I emerged from the trail dripping with sweat and probably looking like I would collapse.

Here’s where it got interesting for me.  I wanted to continue on the Monument/Shawangunk Ridge trail to find the Cedar Swamp trail.  Monument/Shawangunk Ridge continues on the other side of the parking lot.  While crossing the parking lot I felt something flapping on my left boot.  I took a look and I could see where the boot was separating from the sole.  Sigh.  Now what?  I’m a little under two miles in.  It has gotten partly cloudy, to the point that rain may be arriving.  And I have a boot that may be failing.  Looking at the topo map I saw that there wasn’t too much elevation change.  My questions would be a) what if really started raining? and b) could I make it back over the AT if I needed to?

I decided to press on. 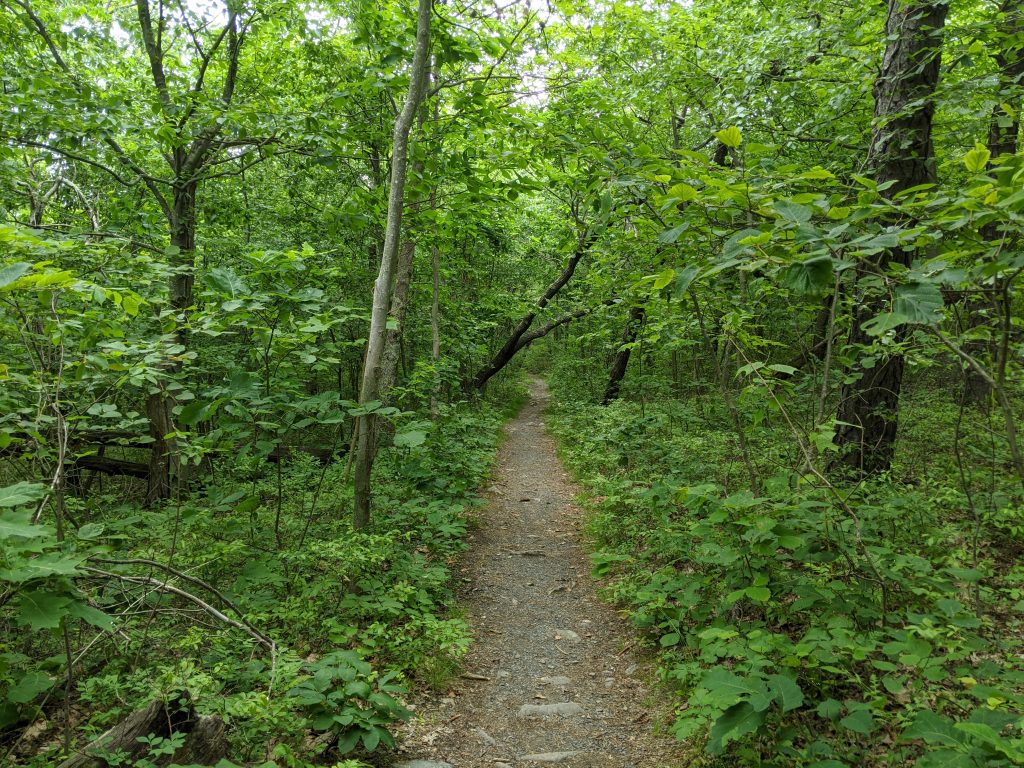 Not a bad decision.  I just had to manage that left boot.  Which held up pretty well.  At a break, I looked at the right boot, and I could see where it too was starting to fail.  Granted, these boots were almost 20 years old, but only used heavily the last five years.

I found the Cedar Swamp trail and completed that circuit.  Backwards I found out.  Typically that trail starts from the parking lot east of Lake Marcia.  The park has set the trail direction as clockwise.  I entered the trail from the Monument/Shawangunk Ridge trail, didn’t see signs, and walked counter-clockwise.  Fortunately, I didn’t see many people, but wondered why I got funny looks from the people I did pass.  When I got to the trail “start” I saw the signs for the temporary directions.  The Cedar Swamp trail was nice, cool, relatively level, and very different from the surrounding terrain. 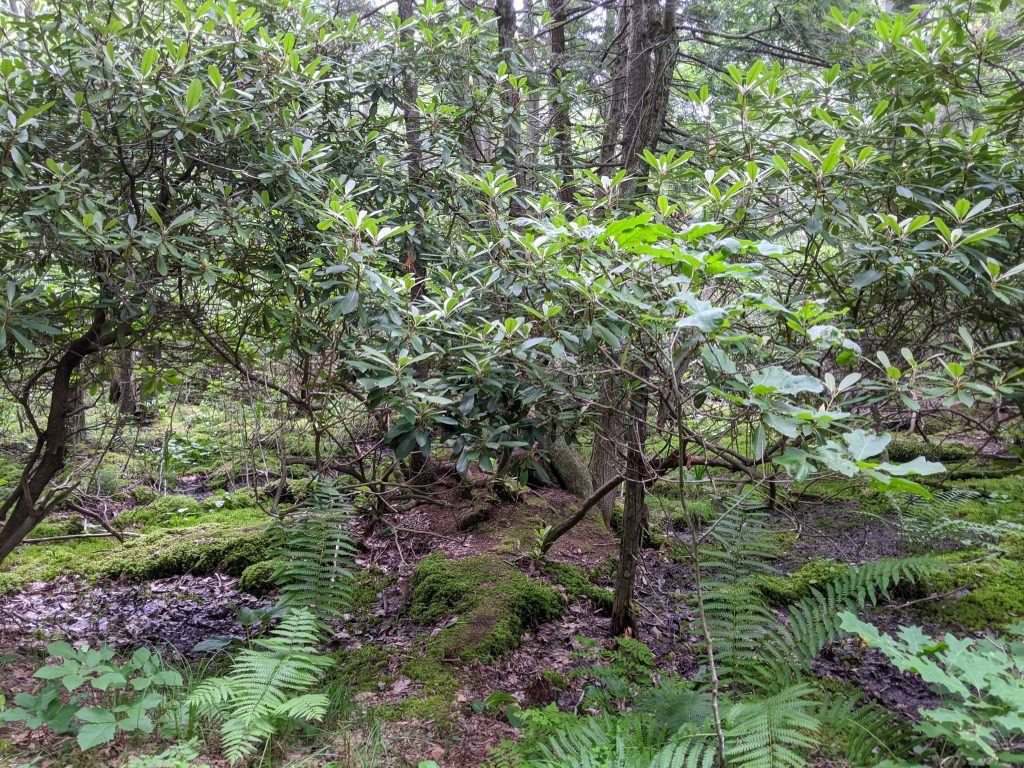 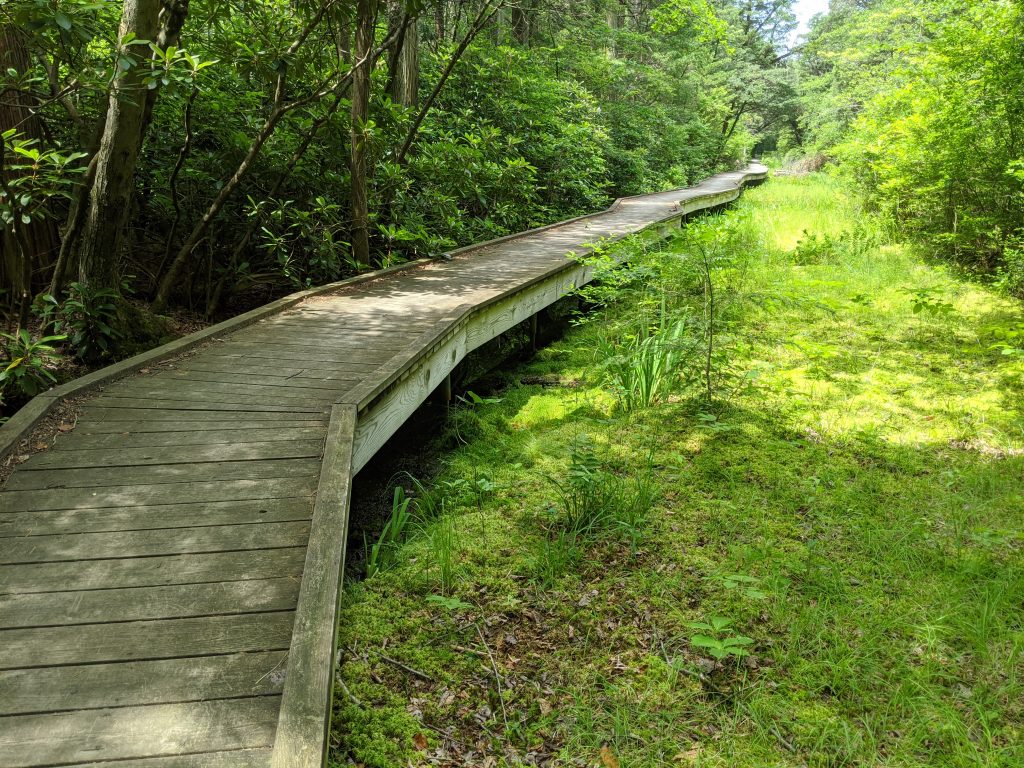 I finished the loop and got back on the Monument/Shawangunk Ridge trail to complete my loop back towards the AT.  Where the Shawangunk Ridge trails bears right to New York I stopped to take a picture at one of the view points.  I believe that’s Port Jervis in the distance.

I continued on the Monument Trail.  After a little bit I noticed some good elevation changes, one of which became pretty rocky.  And, my left boot was becoming worse.  I quickly realized I was going to have to make some decisions soon.  Coming out of the woods, I followed the trail down to Marcia Lake.  The sun was out, it was a little warmer so I stopped to eat and rest again. There’s a beach at the far end, and it was packed with people; some swimming in the lake. 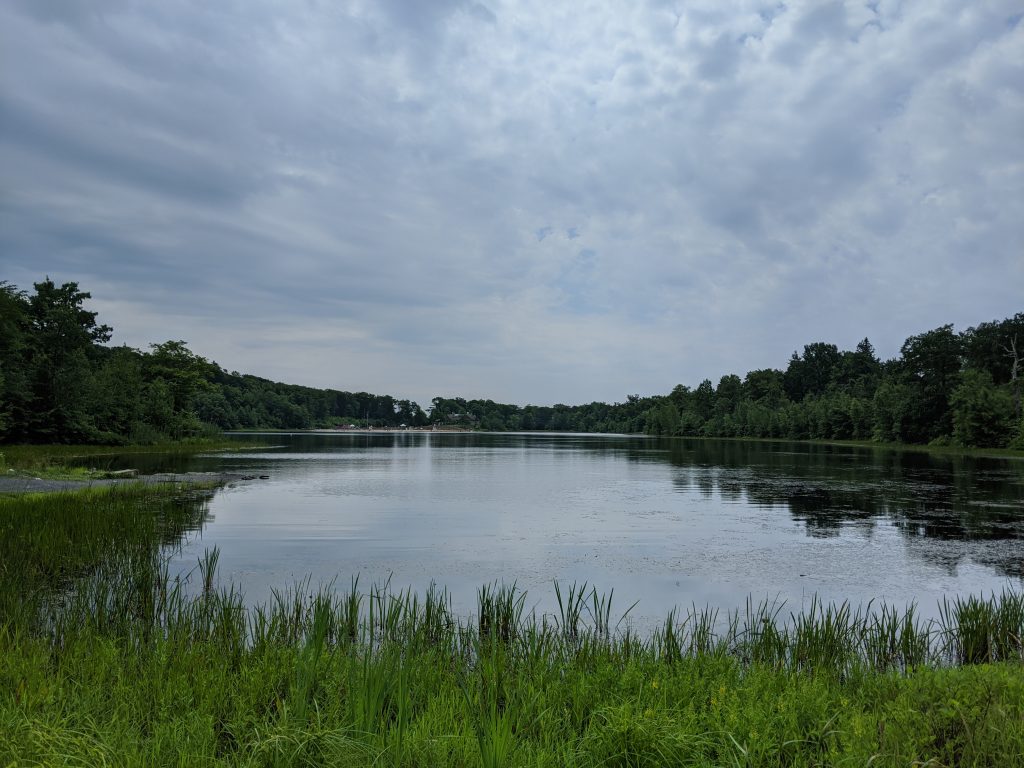 Looking at my boot I realized I would not make it back over the AT.  I decided to road walk the rest of the way back.  And honestly, even without the boot problem, this might have been the better decision as the walk around the lake was extremely pleasant, albeit warmer.

After exiting the park I had a short road walk on Route 23 south, probably a quarter mile or so.  About 300 yards from the AT parking lot, the boot and sole separated.  I am extremely thankful it happened here, rather than on the trail somewhere.  Big lesson learned – I’m now carrying a small role of duct tape for these kinds of situations. 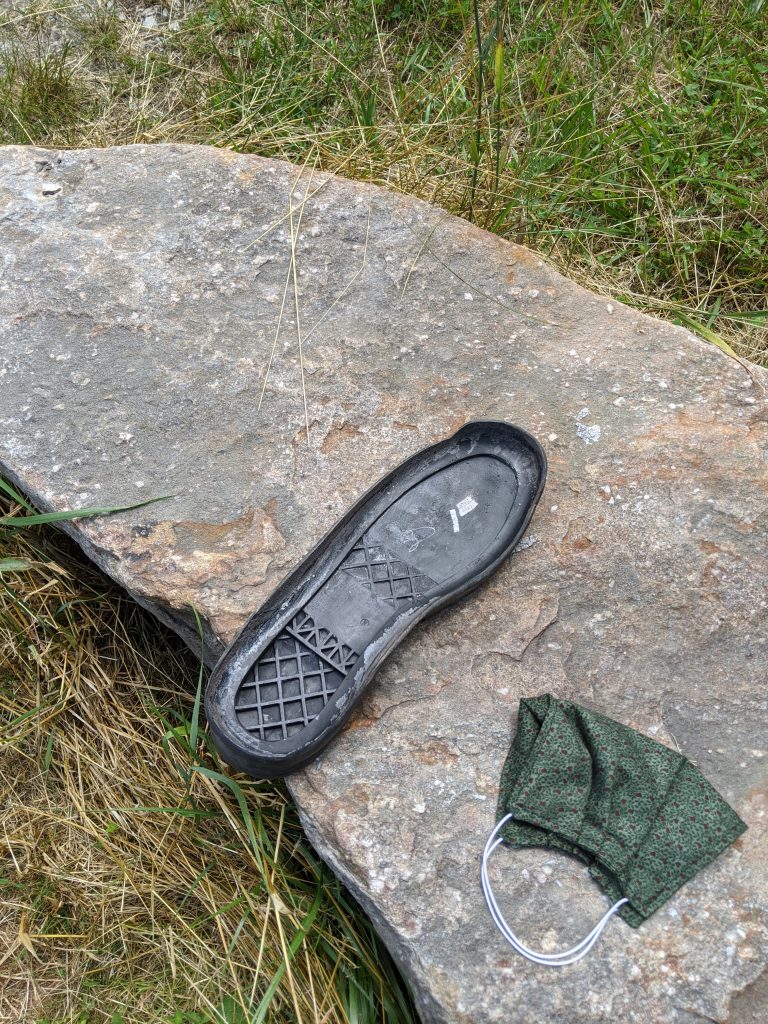 I really enjoyed this hike, I’d like to come back and hike some of the southern area from the parking lot.  The mental stress of the hike was certainly a distraction, but being better prepared on my part would alleviate that.  The AT parking lot was not full when I returned and is a great place to park if you don’t want to pay the fees and/or don’t mind the the extra walk. 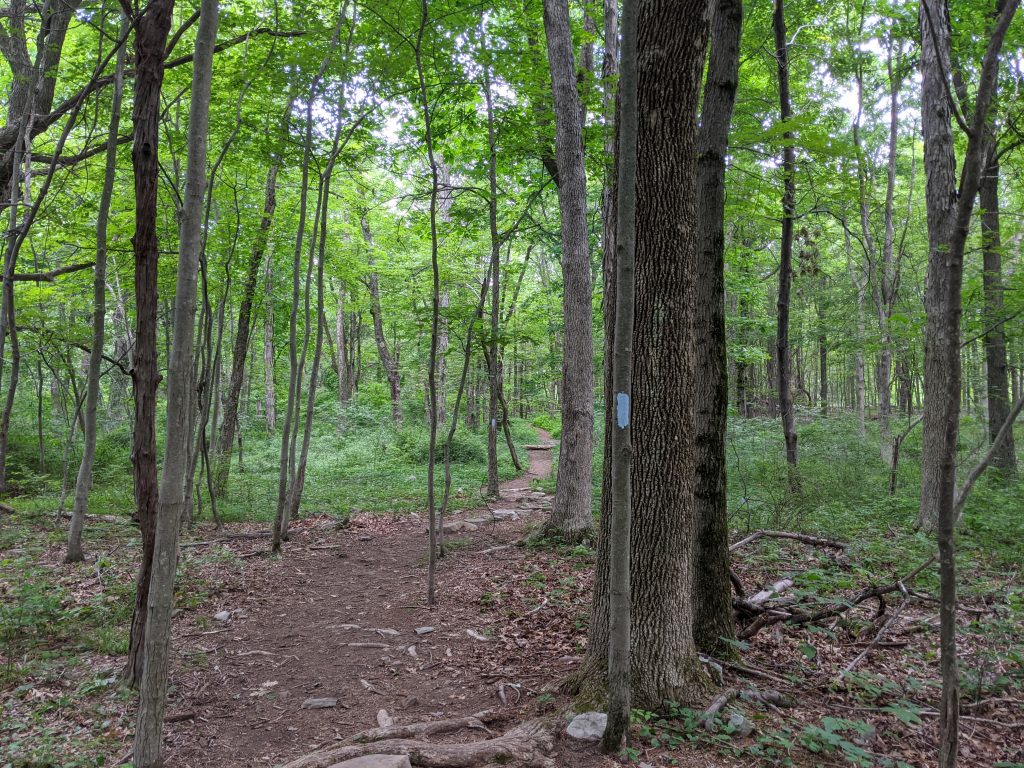 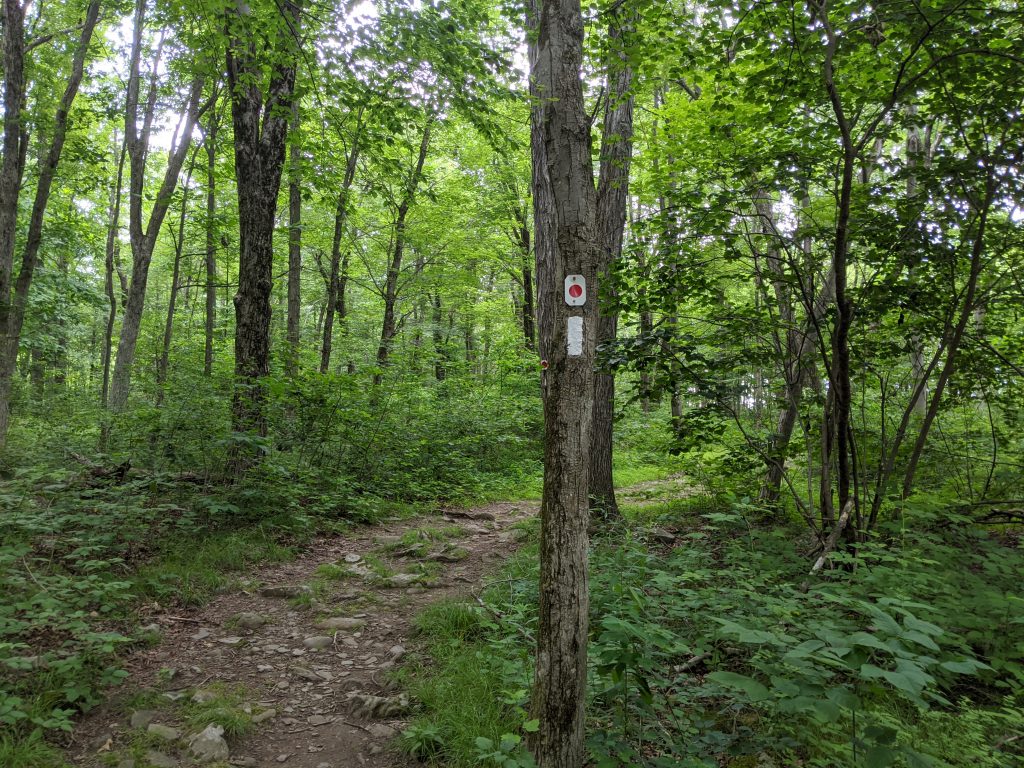 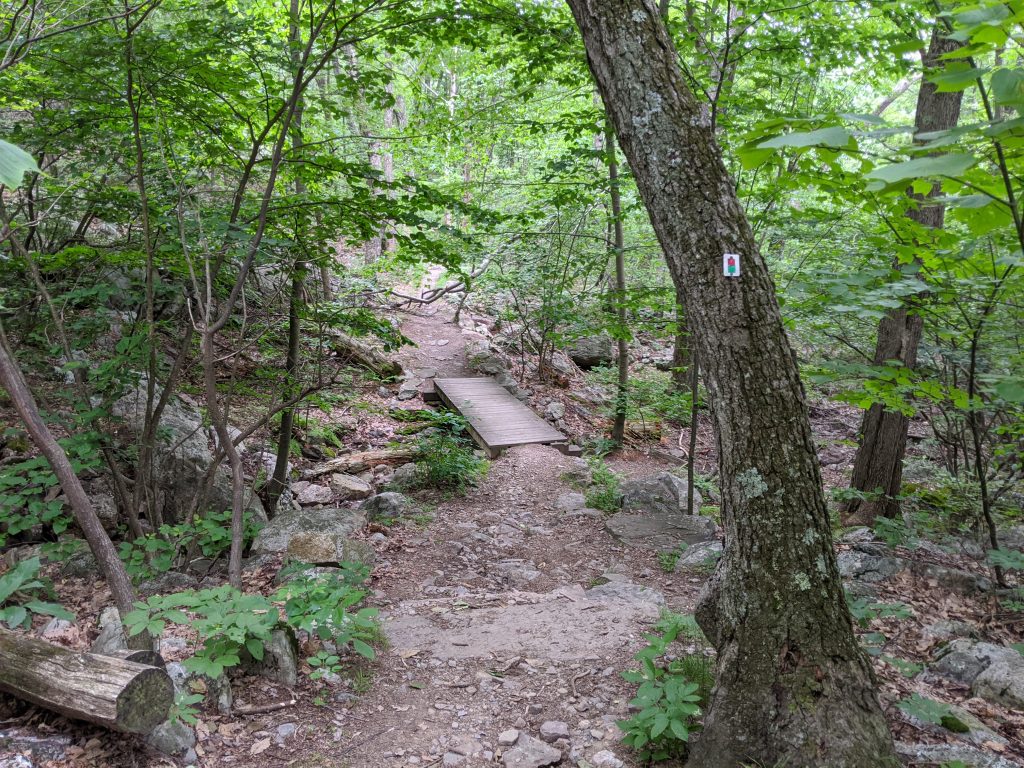