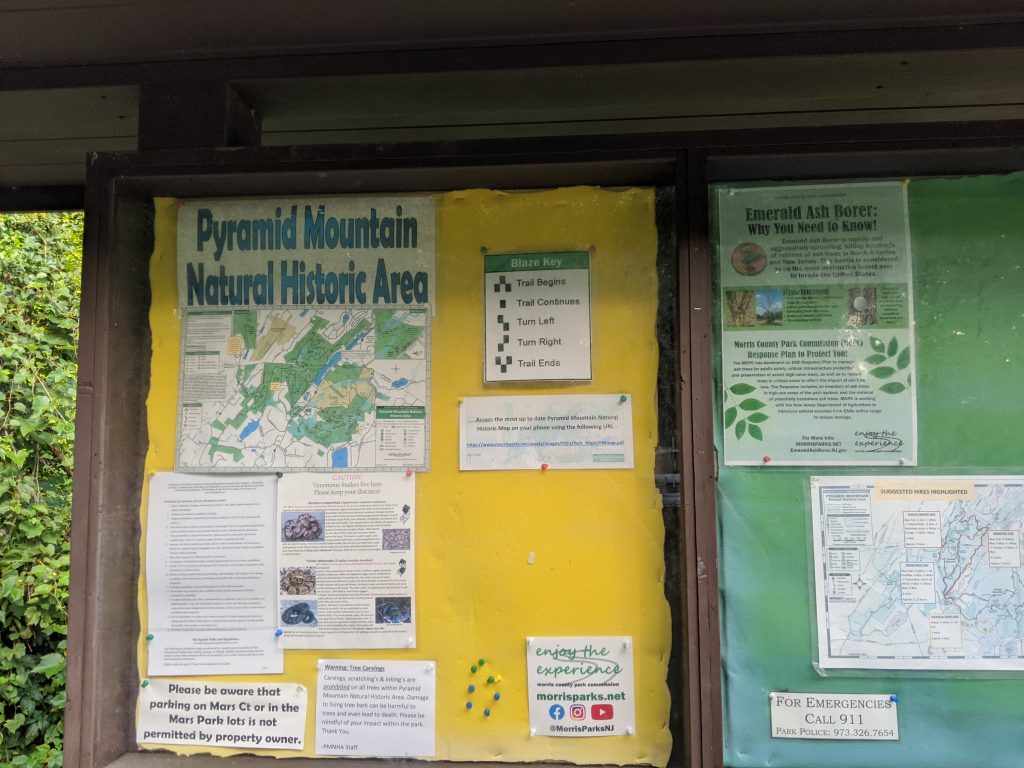 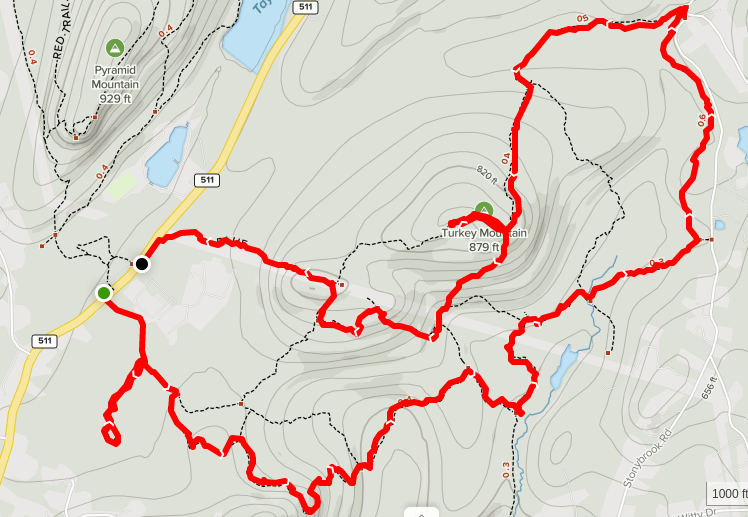 I had been to this park before, though the other side of the street.  Back in 2017, I hiked Pyramid Mountain with my dad in the rain – rain for most of the hike.  It looked like a higher chance of rain on Sunday, so I made this a Saturday hike.  I arrived at the parking lot at 8:30 in the morning, and it was already packed, so I had to park on Mars Court, across the street.  Be careful parking here, you can only park on one side of the streets; and businesses have ominous signs in their lots.  I was surprised it was that packed that early, though it was a really nice day.  I believe I was the fourth car on Mars Court (and when I returned, there were cars all the way down the street, and on 511 south of the park.)  That’s why there is a gap between my starting and ending points on my map, above.  Almost everyone was on Pyramid Mountain, I had Turkey Mountain virtually to myself.

I like this park:  trails are wide (for the most part) made up of mostly dirt and rocks.  There is great signage and trails are very well marked (except when the turn symbol is on a blowdown.)  I noticed at major trail junctions there were cairns, so it was kind of hard to get lost. 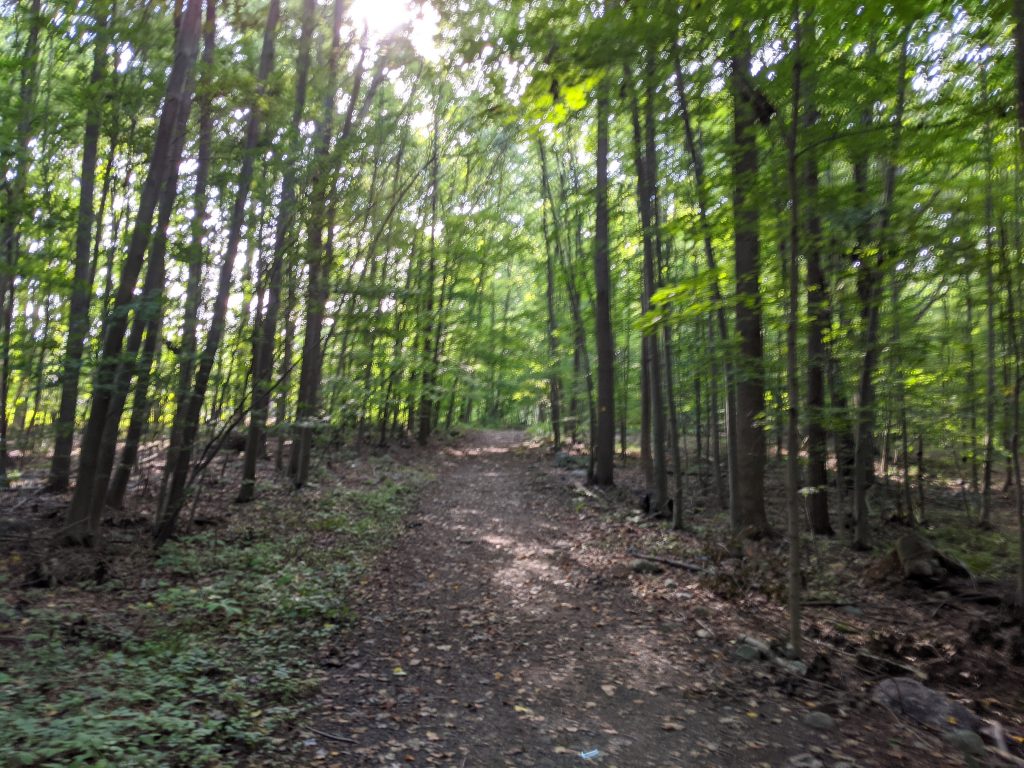 I wasn’t planning on taking the red trail right at the beginning, but I thought I saw a viewpoint on the map.  About 300 yards in, I ran into: 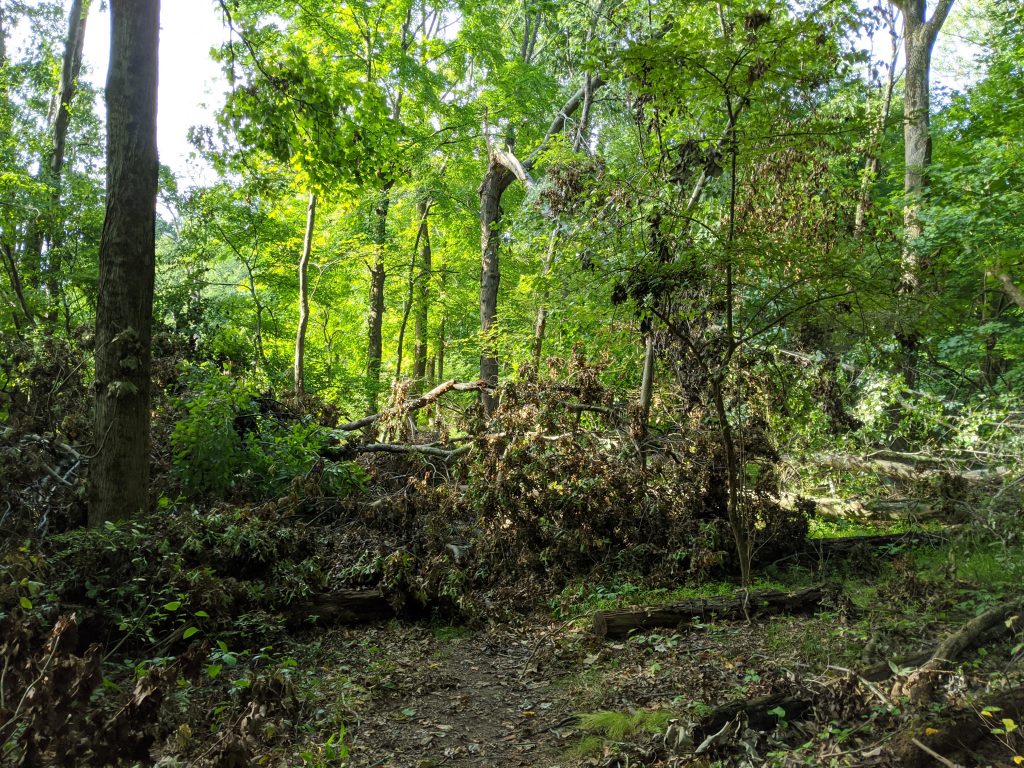 There were numerous blowdowns all through the park, most easily navigable. 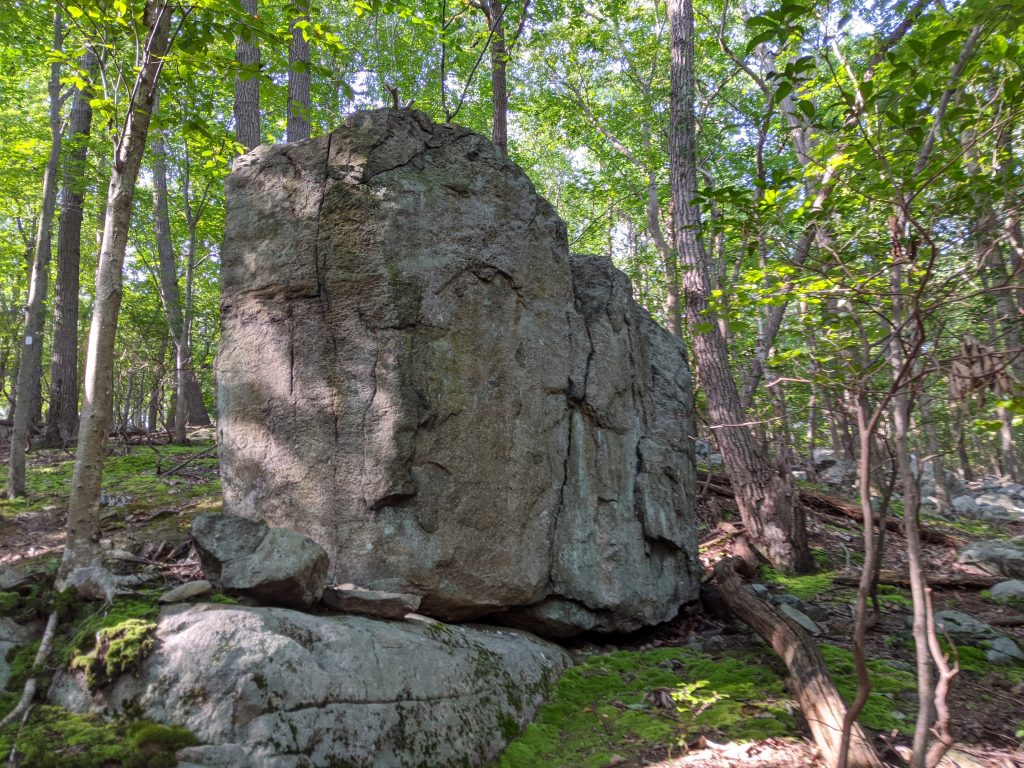 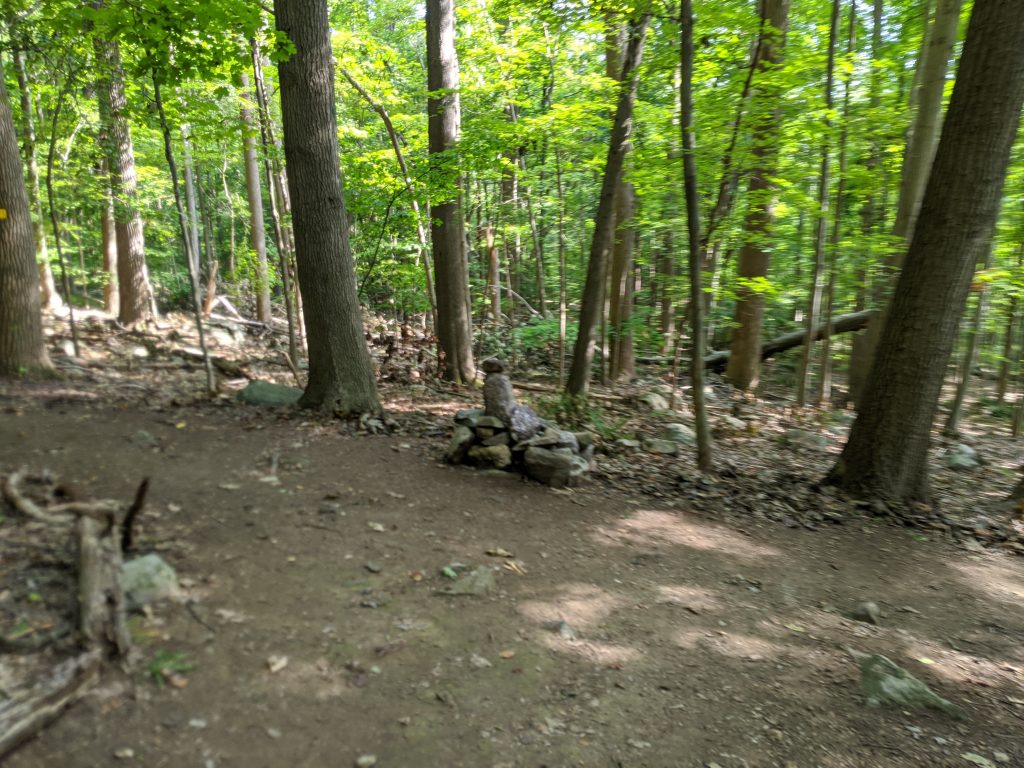 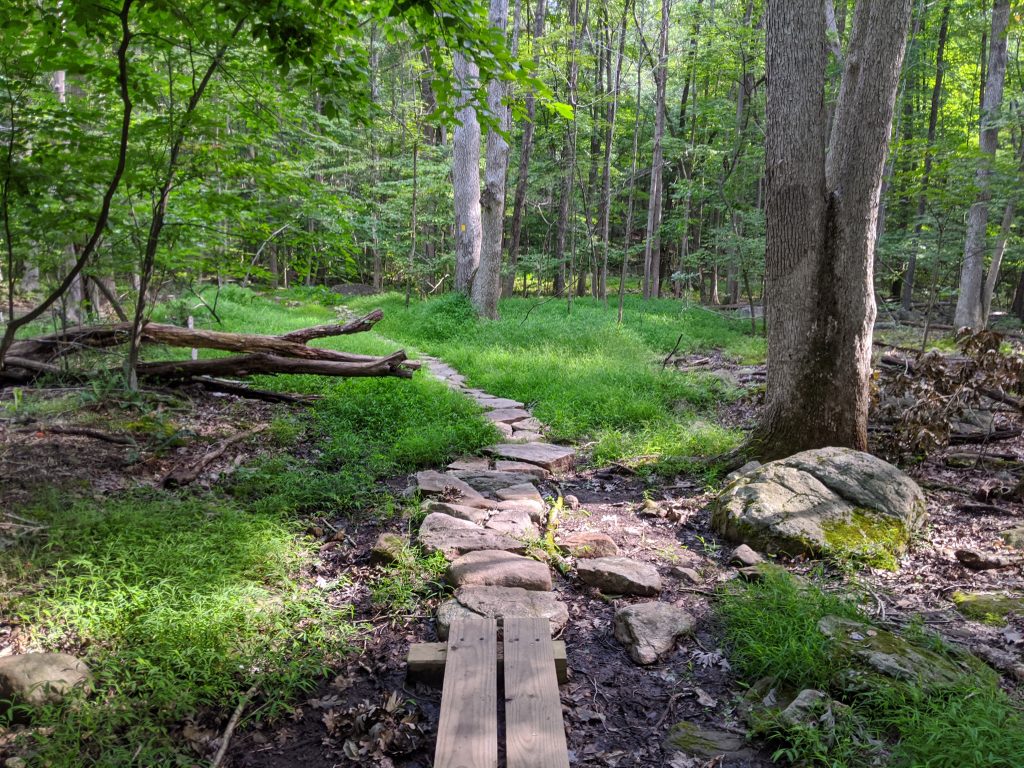 While scrambling in the lower portion of the park, it started to get HOT and very humid.  Unlike High Point, I had to zip off the lower portion of my pants.  Not my favorite thing to do, as I’m susceptible to poison ivy, and it’s too easy to get ticks from the fields and high grass.  And no one needs to see my legs.

If you follow the route I took, you will cross the powercut at least four times.  Twice you will go right under towers.  I wasn’t totally prepared for that, as at the first tower, you could hear buzzing. 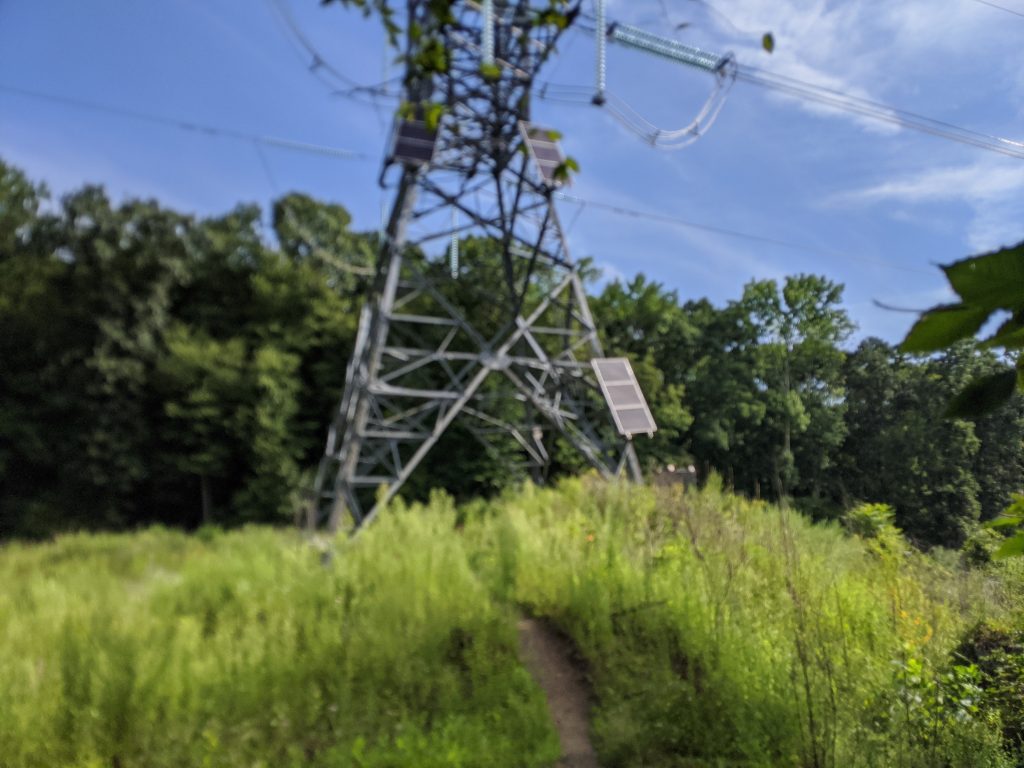 This guy almost got stepped on. 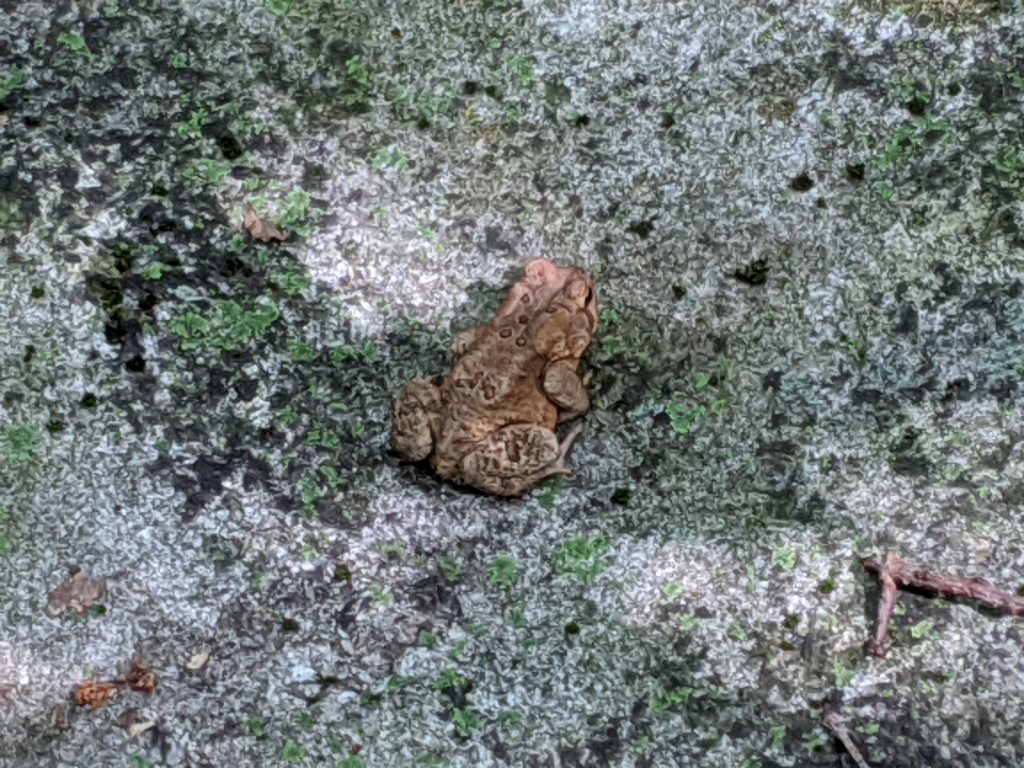 Following the Yellow trail along the roadside, it suddenly comes out on the road. 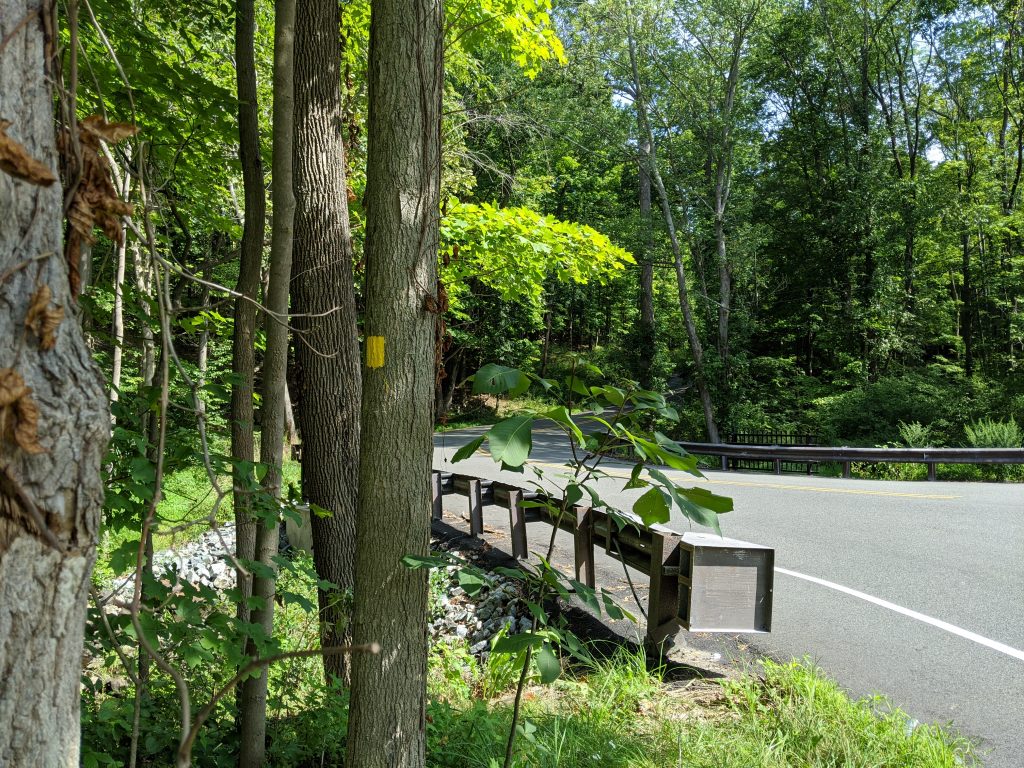 Fortunately, it’s pretty well marked, right after the guardrail, make a left into the woods.  (I noticed a pullout parking spot for one car at this spot.)

At this point, you are heading up Turkey Mountain, I believe to the highest point in the park on this side of 511.  While the trail is wide, I ran into a stone wall that crosses the trail. 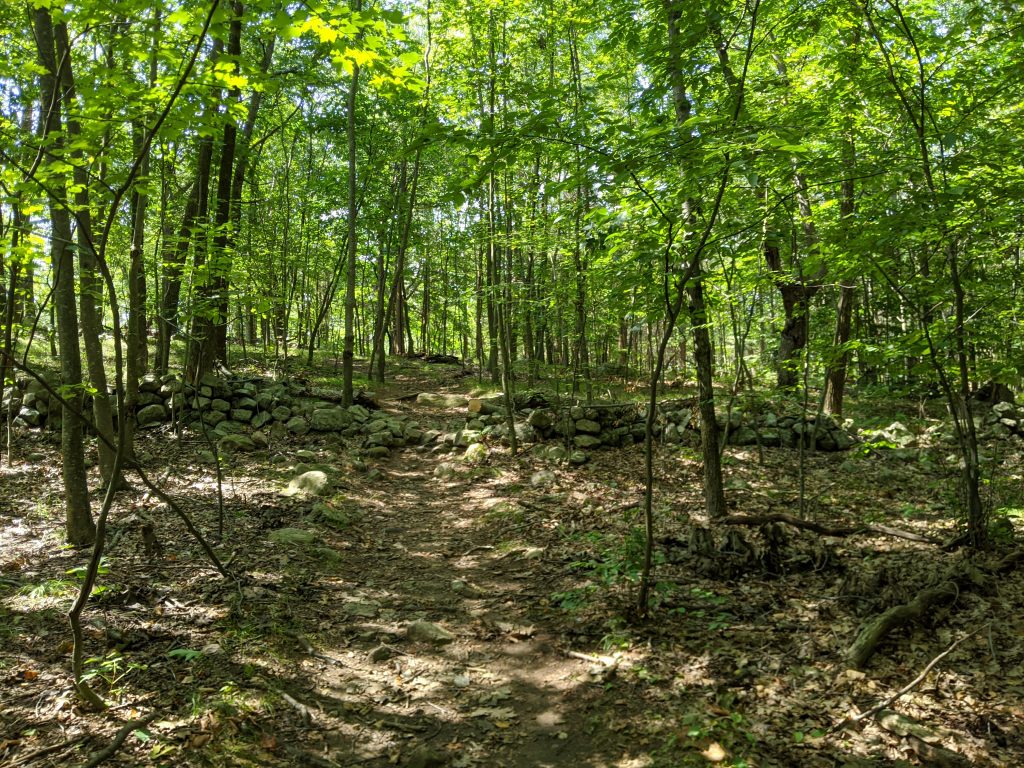 When Yellow T-intersects with Red, I took a quick detour to the right to find the actual top of Turkey Mountain.  I couldn’t find a marker, but GPS confirmed that I did in fact reach the highest point.  I retraced my steps, and continued on Red.  There’s a steep descent where you run into Green.  Then a steep ascent, at the top of which are stone ruins.  This area, at one time, was a limestone quarry. 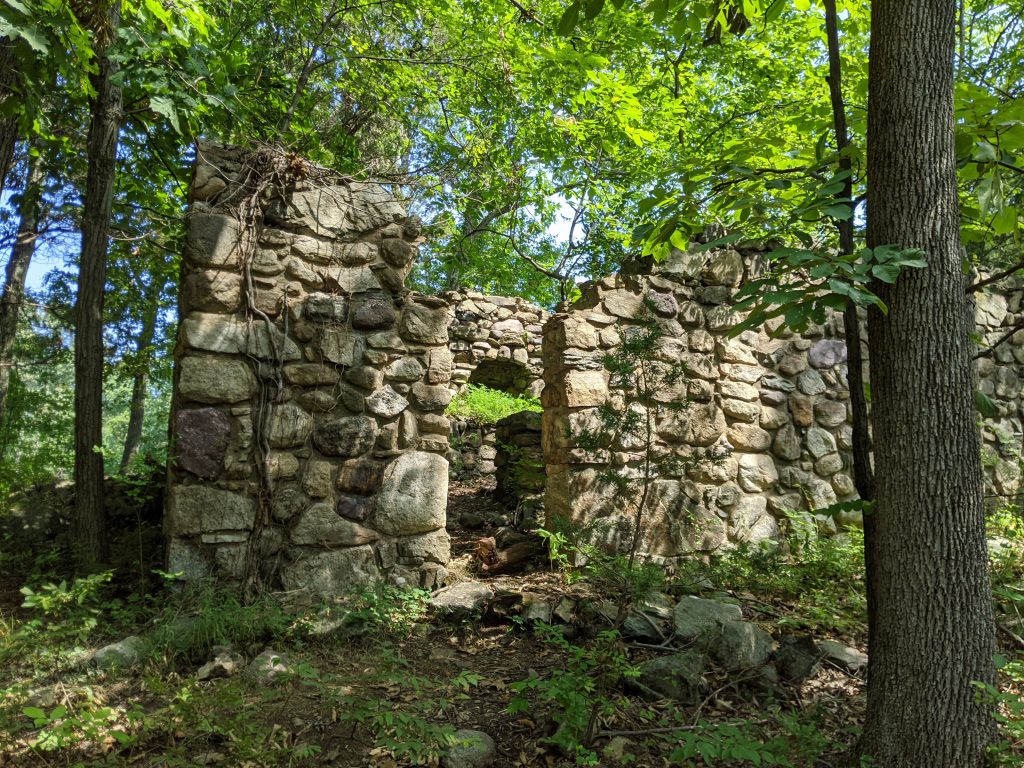 Following Green you come to a great spot overlooking Lake Vallhalla.  There are numerous overlooks along this route, however with the leaves out, many overlooks did not have views. 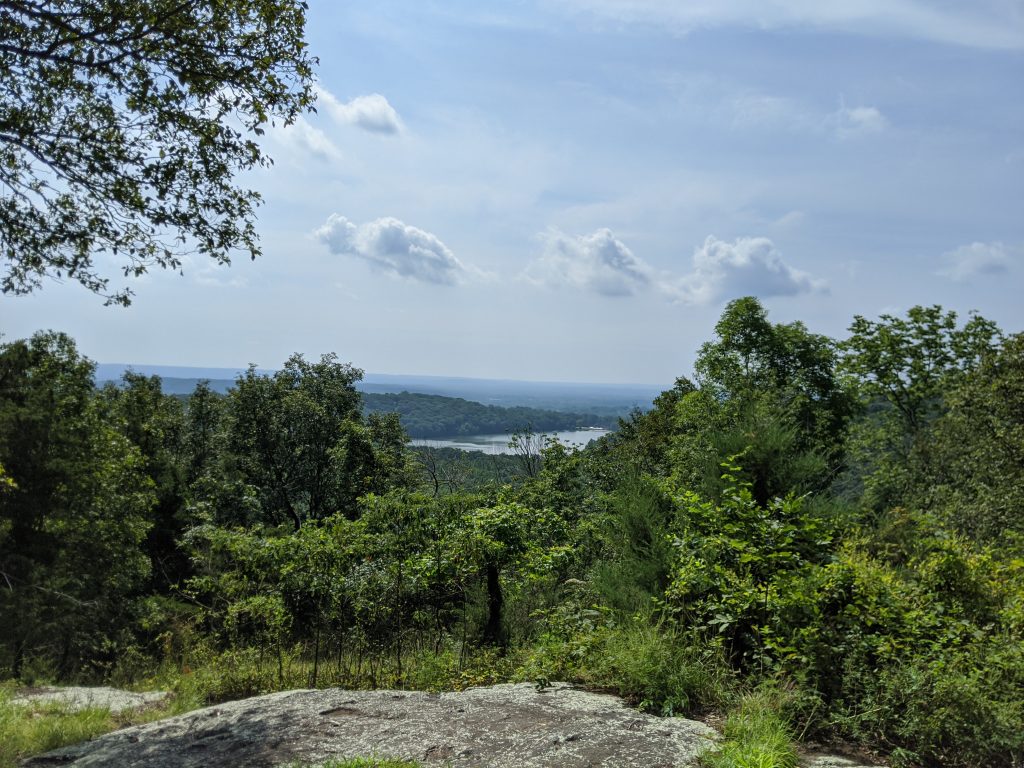 Finally, I followed Green until Blue, which traveled uphill and up the powercut.  There were some great views from the base of the powerline tower. 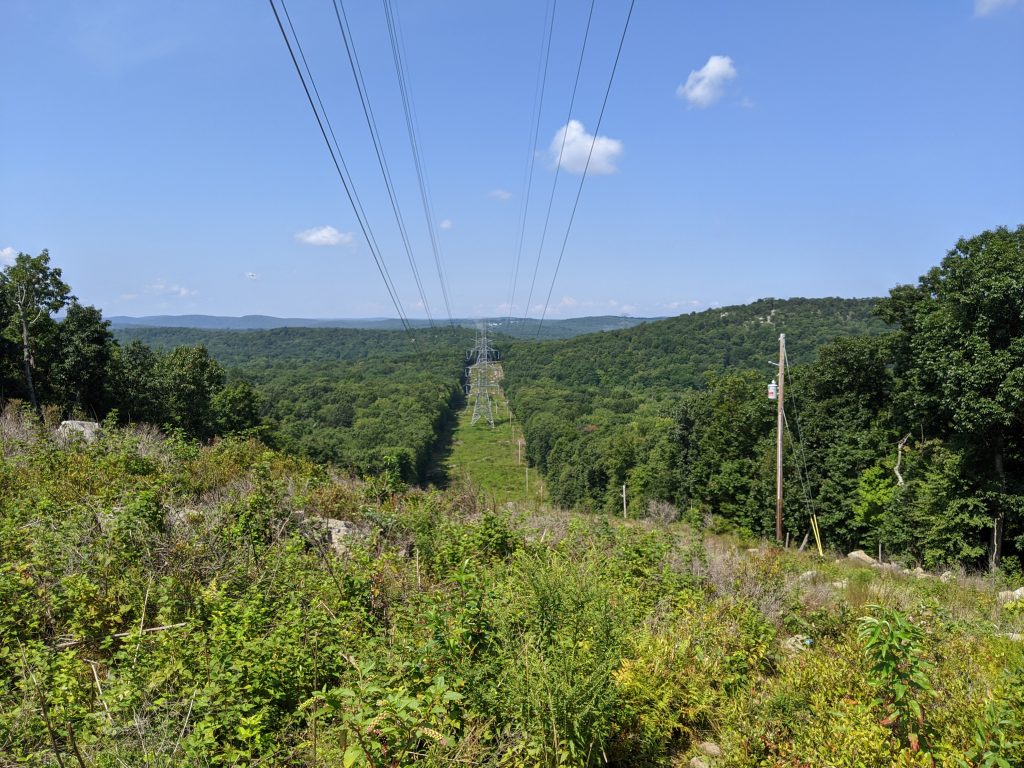 This was the beginning of the 100 Stairs, the path down to the road and back to the car.  In the bright, hot and humid sun, this was tough.  In the Fall, it’s probably great.  On a hot and humid day, it’s strenuous. 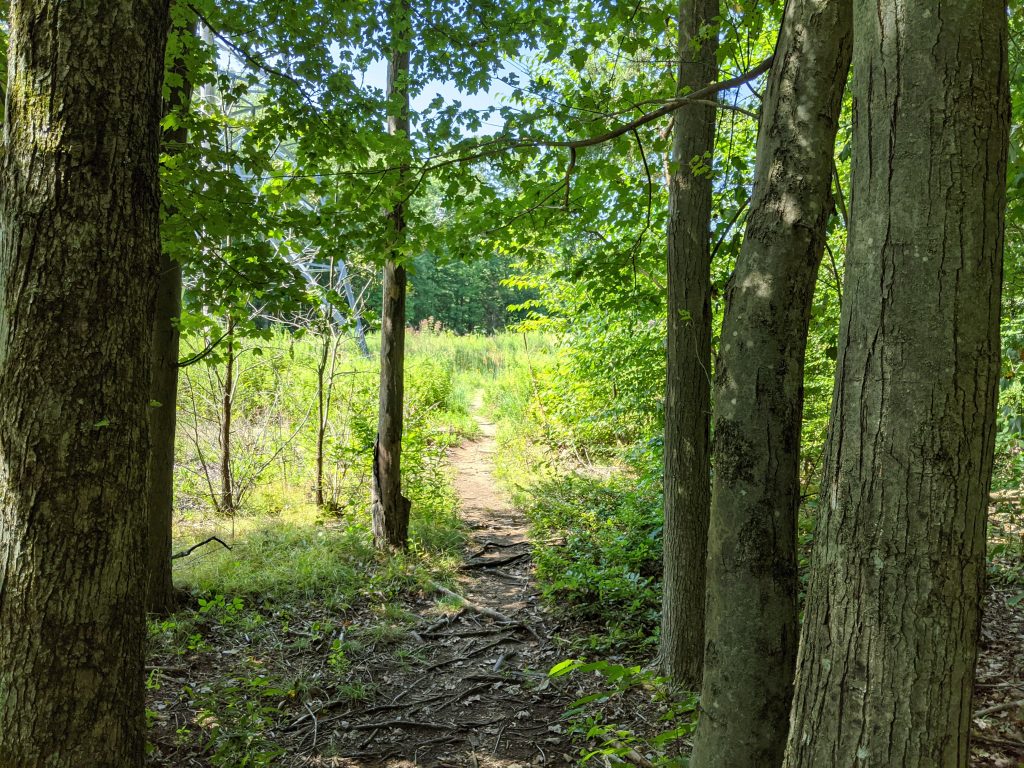 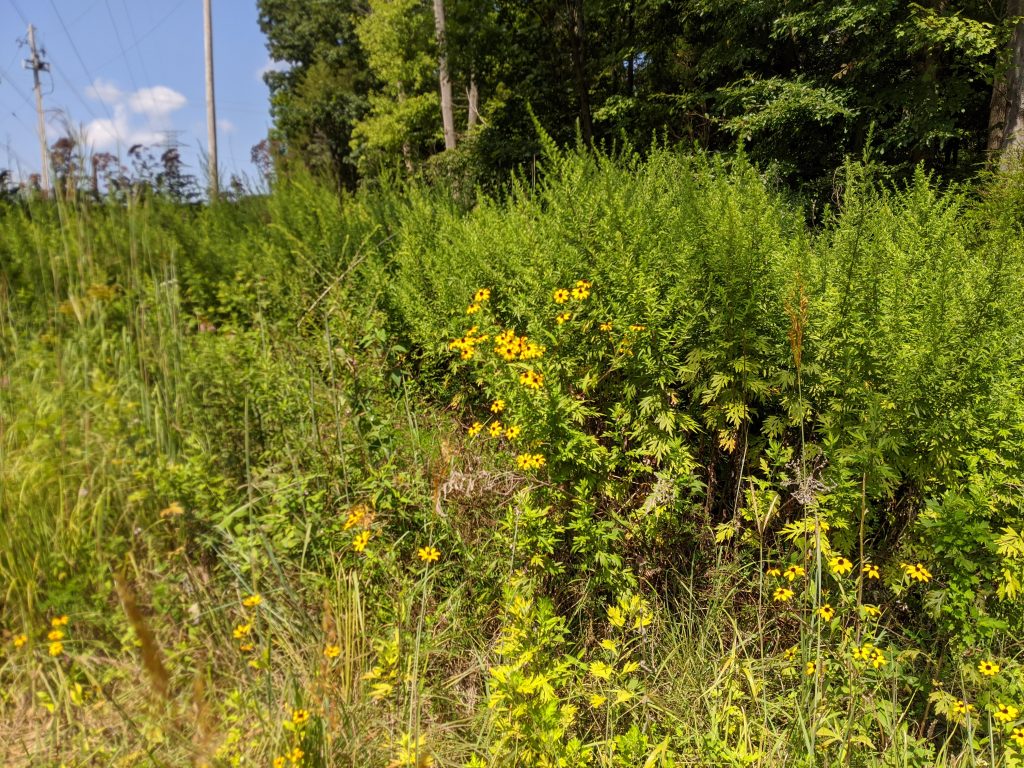 All in all this was a great hike.  There were a couple of rock hops that probably are trickier in the spring with more water flowing.  Also, it was nice to come back to this park on a day where it wasn’t raining.  When I got back to my car, the street was packed, but I noticed more people returning from Pyramid Mountain. 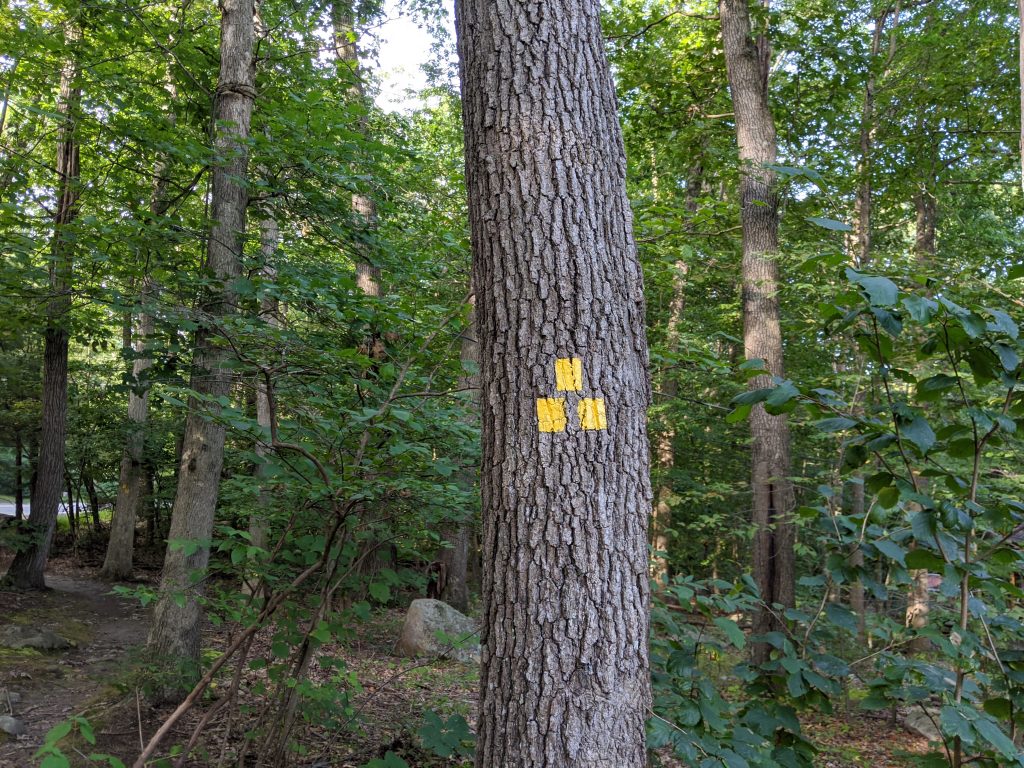 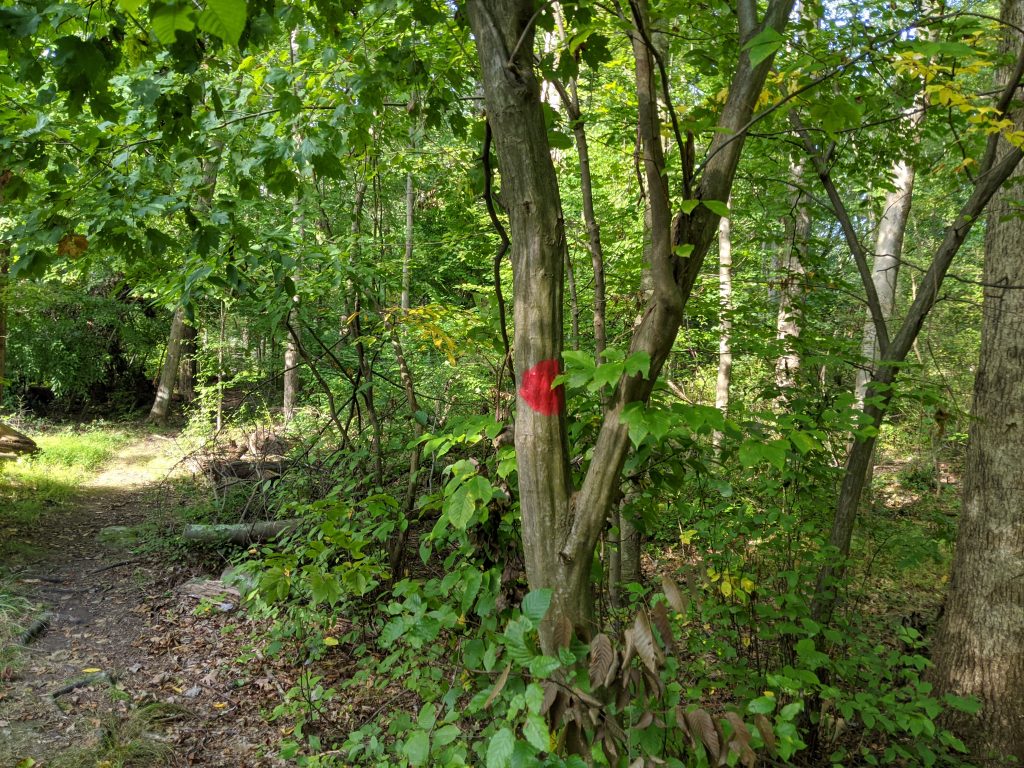 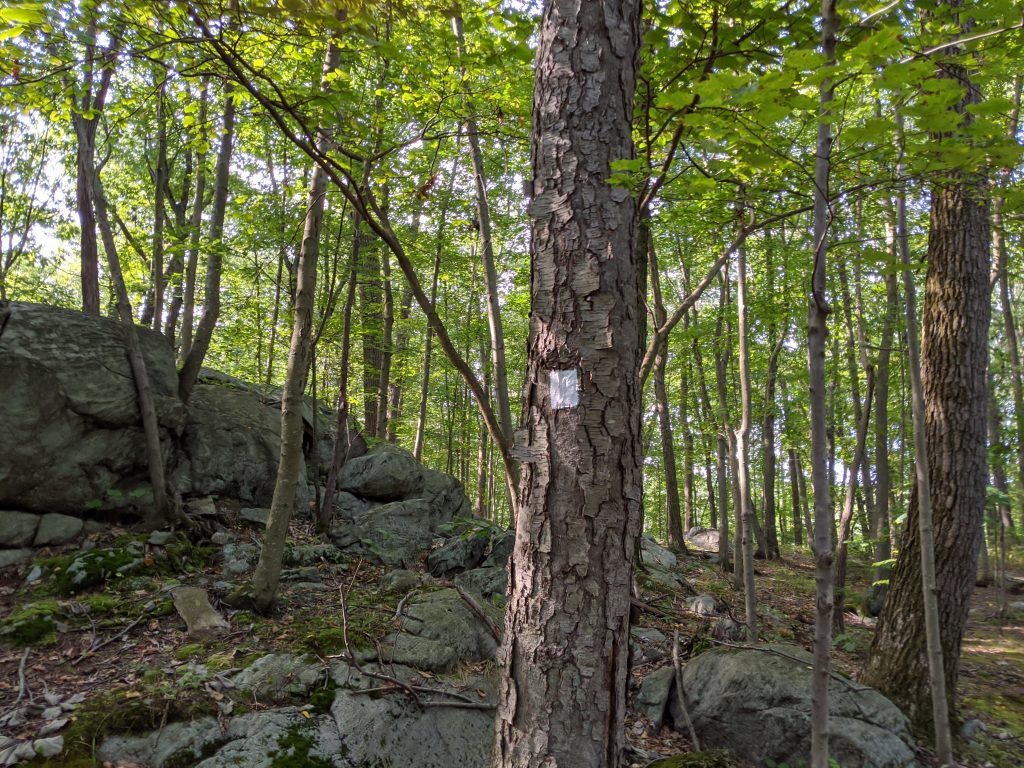 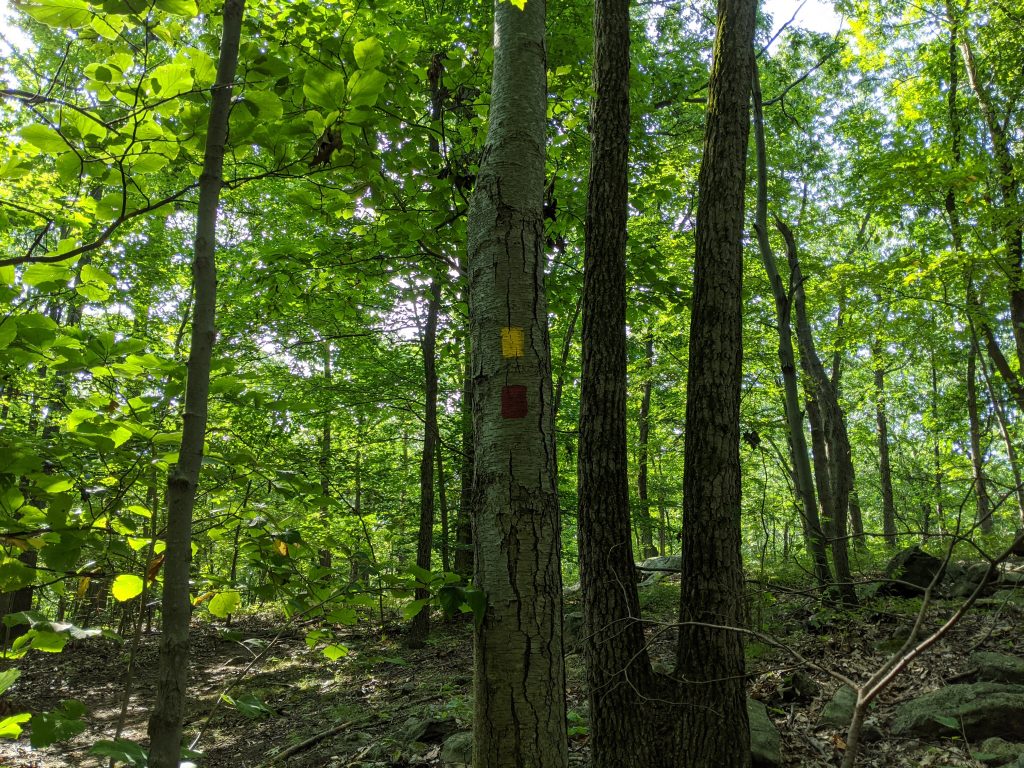 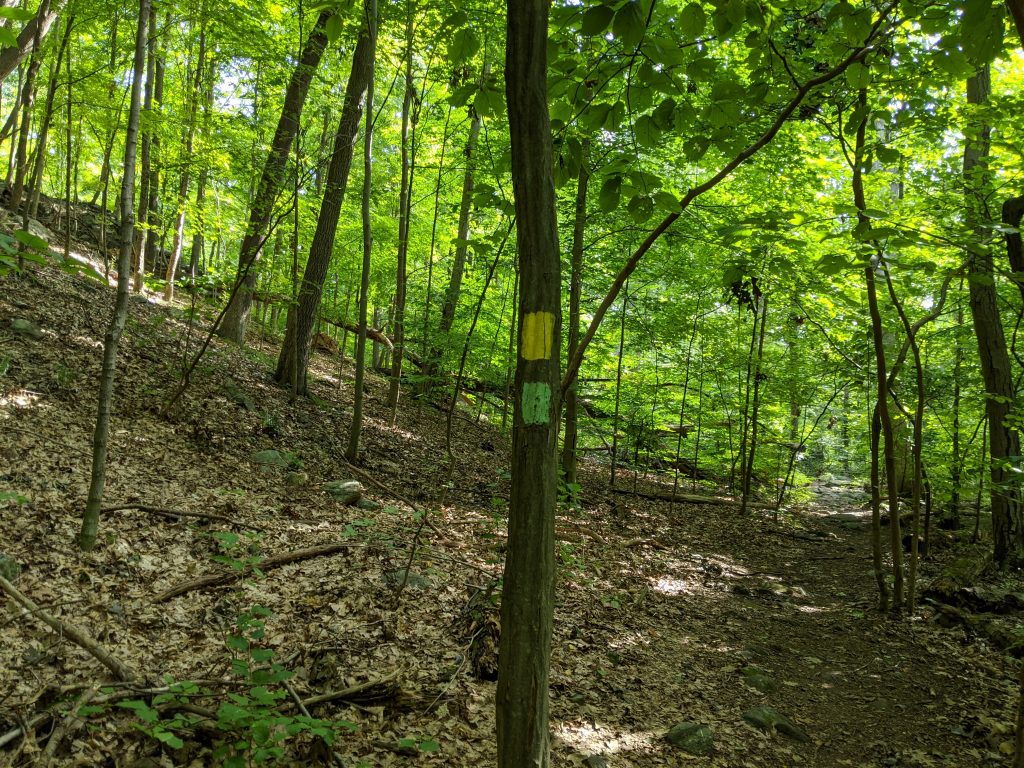 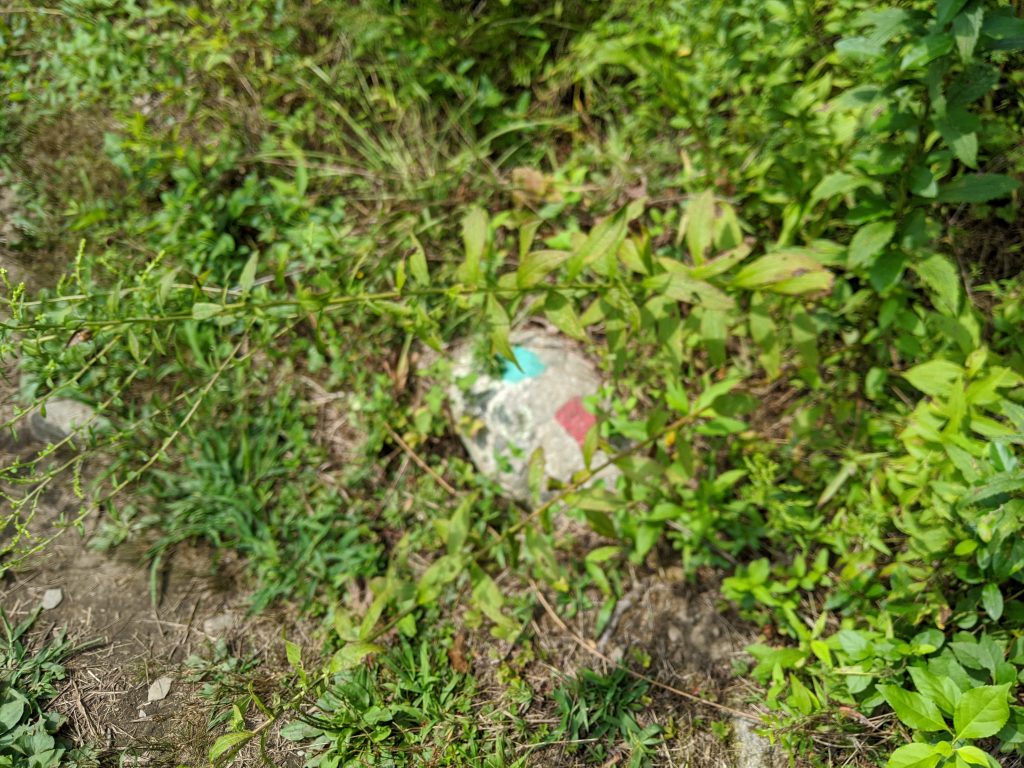 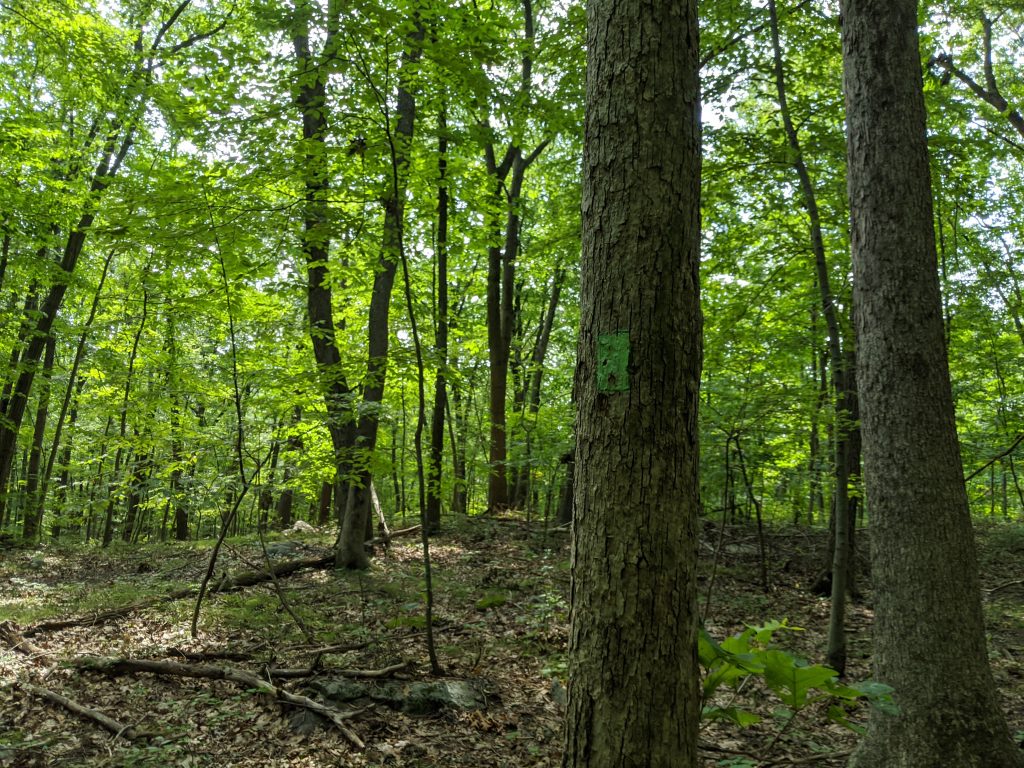 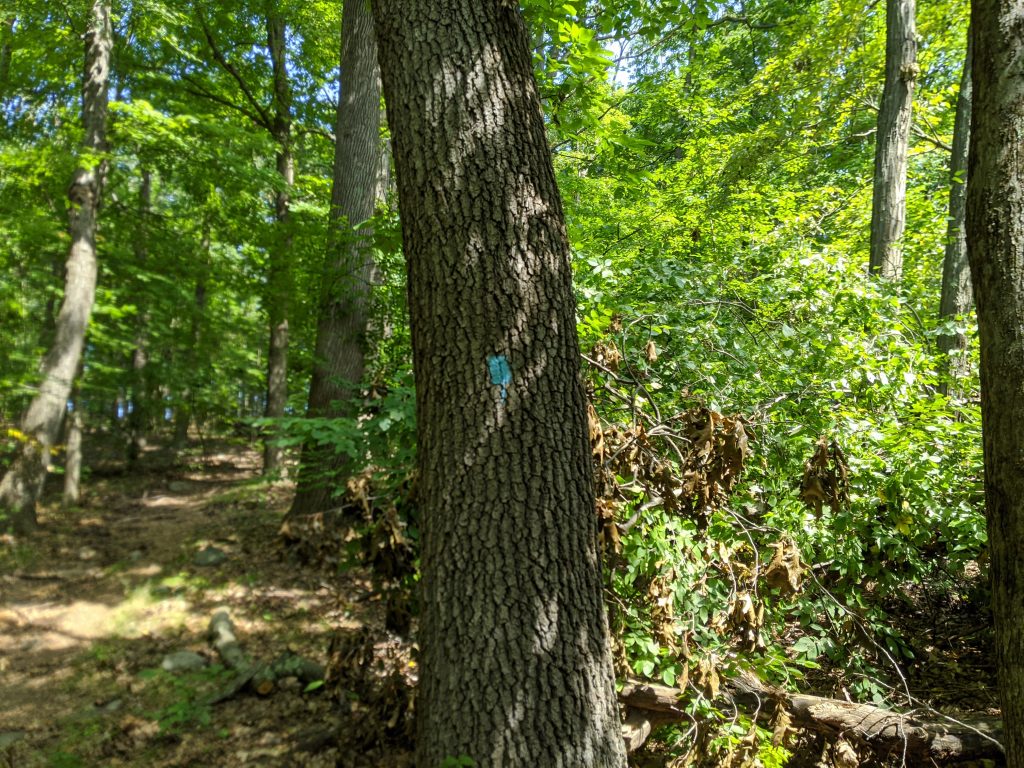