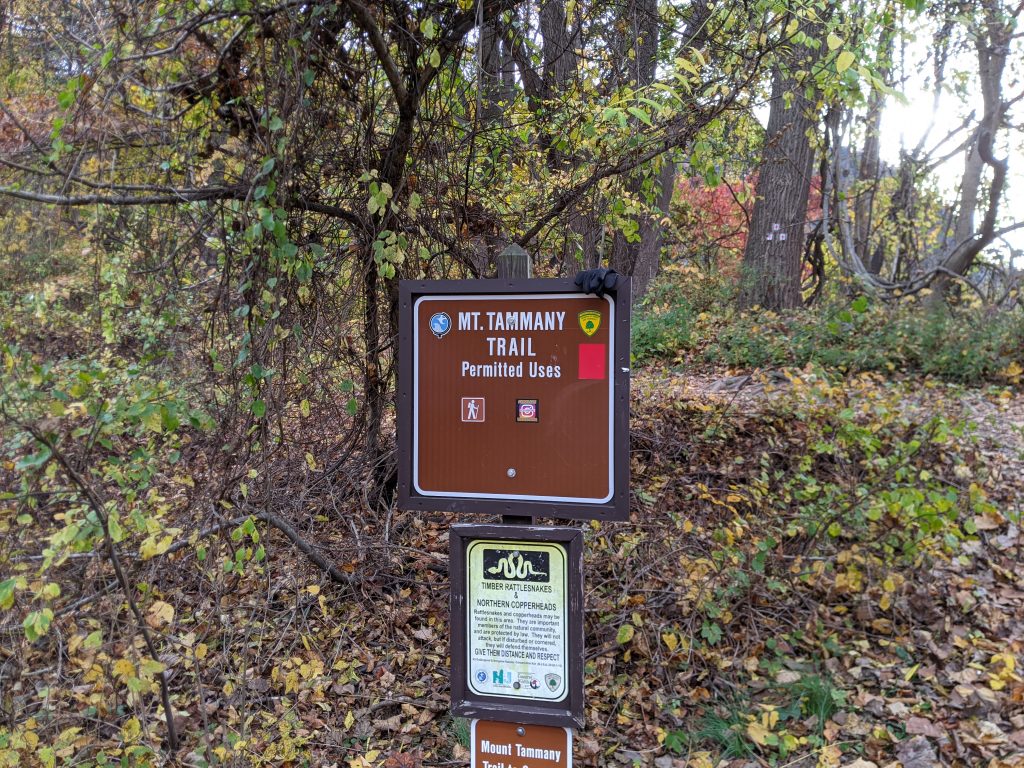 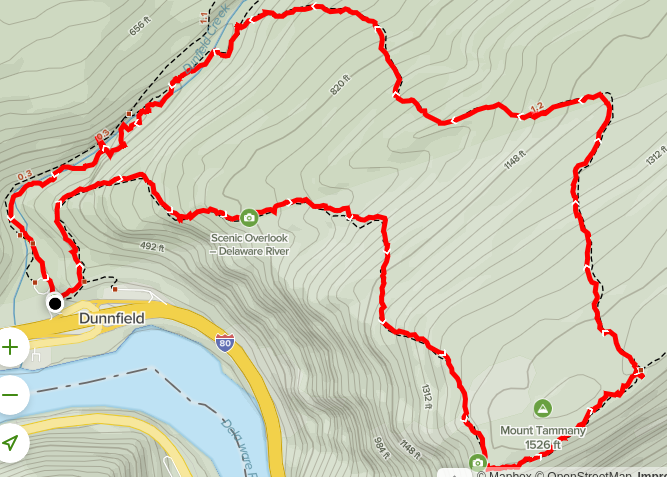 Nothing says Fall like driving north on Routes 31 and 46 north of Route 78.  The colors, the farmstands, the cool air; it’s all there.  This was not my intended destination, but I figured I would give it a whirl since my initial destination was before this, and I figured if the lots were full I could go back to where I initially intended to go.  I got lucky.

It was in the 40s when I left, and it was probably 50 when I got back to my car after the hike.  The top of Mt. Tammany was definitely cooler.

Be warned.  The lots fill up fast on a weekend. I just missed getting into the lot by the trailhead by one car.  So, it was down to exit one, go under 80, and back to the visitor’s center; which, by my arrival had plenty of spots left.  However, I had a good half-mile walk to the trailhead.  Do not park on 80.

I have fond memories of hiking Mt. Tammany (and Mt. Minsi) back when I was much younger, but it had been a long long time since I was last here.  The visitor’s center seemed very different (it wasn’t open for obvious reasons) from when I was here last.

Even though I was early (9:00 a.m.) the Red Dot trail was crowded going up.  That’s an understatement.  I felt like I was in a conga line and I thought back to Stairway to Heaven a couple of weeks ago.  So, you won’t see many pictures of the way up.  In fact, I wore a mask almost the entirety of the ascent.  You will see all types of people heading up.

The overlook on the shoulder still afforded a great picture. 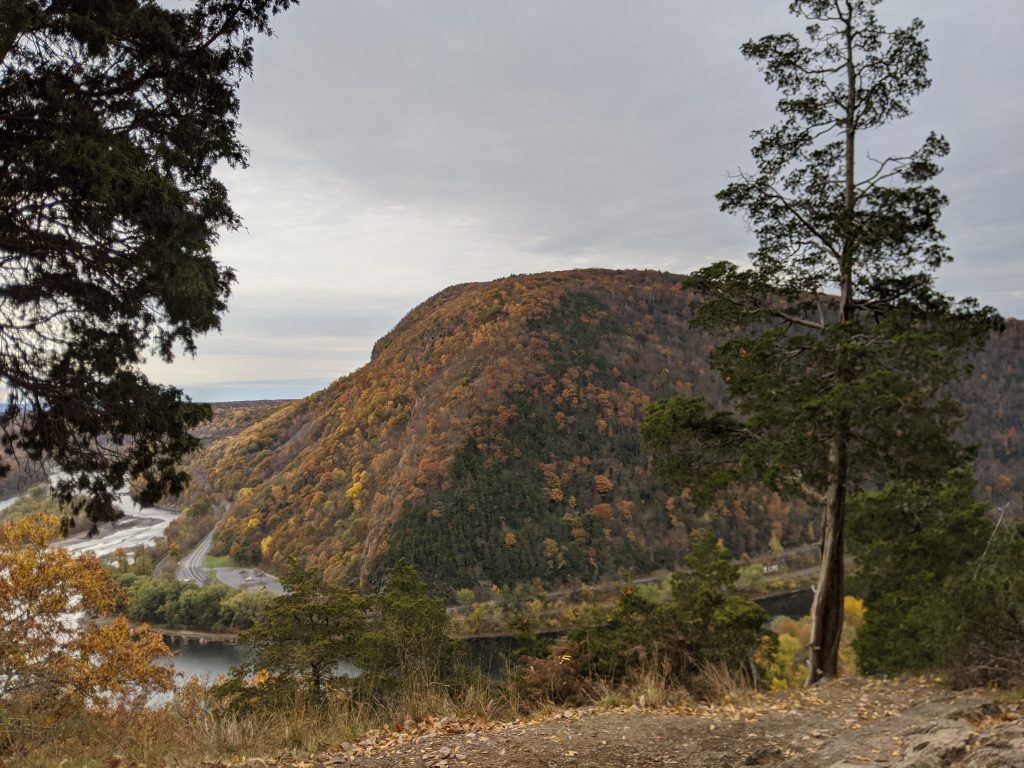 As I mentioned, it has been a long time since I was last here.  While there was lots of scrambling on the way up, there was a particular rock I remembered, and the trail turned left just before that rock.  I feel like the trail has been re-routed.  What seemed new to me was a real long scramble to a rock-strewn trail to the top.  I have vague recollections of a forest walk before coming to the top that I did not pass through.

It took me about an hour to reach the top, due mainly to having to stop and wait for the line in front of me to make it up the rocks.  Once to the top, you can’t help but take the iconic picture:

It was very crowded at the top, and much colder.  I stayed to eat a little (it was only 10:00) and enjoy the view.  Then it was off before the rest of the crowd got there.

I took the Blue trail back down, and for the most part the trail was exactly as I remembered it.  Fortunately, I had the trail mostly to myself, which allowed me to grab some pictures. 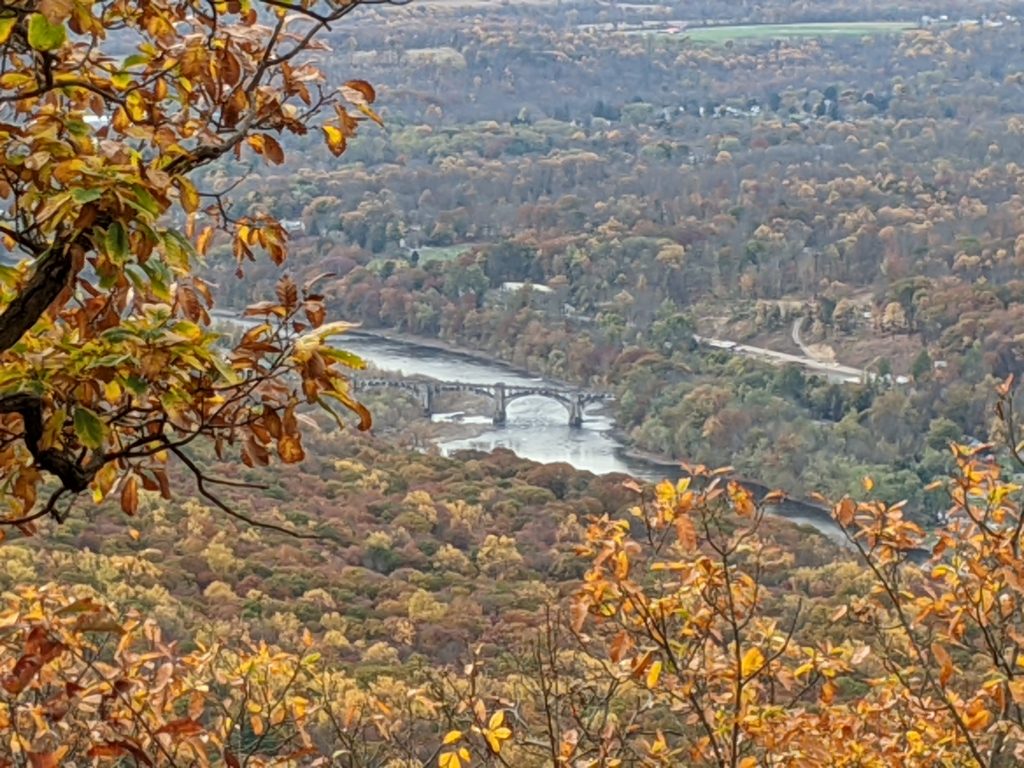 The ridge walk is pleasant, before it heads downhill. 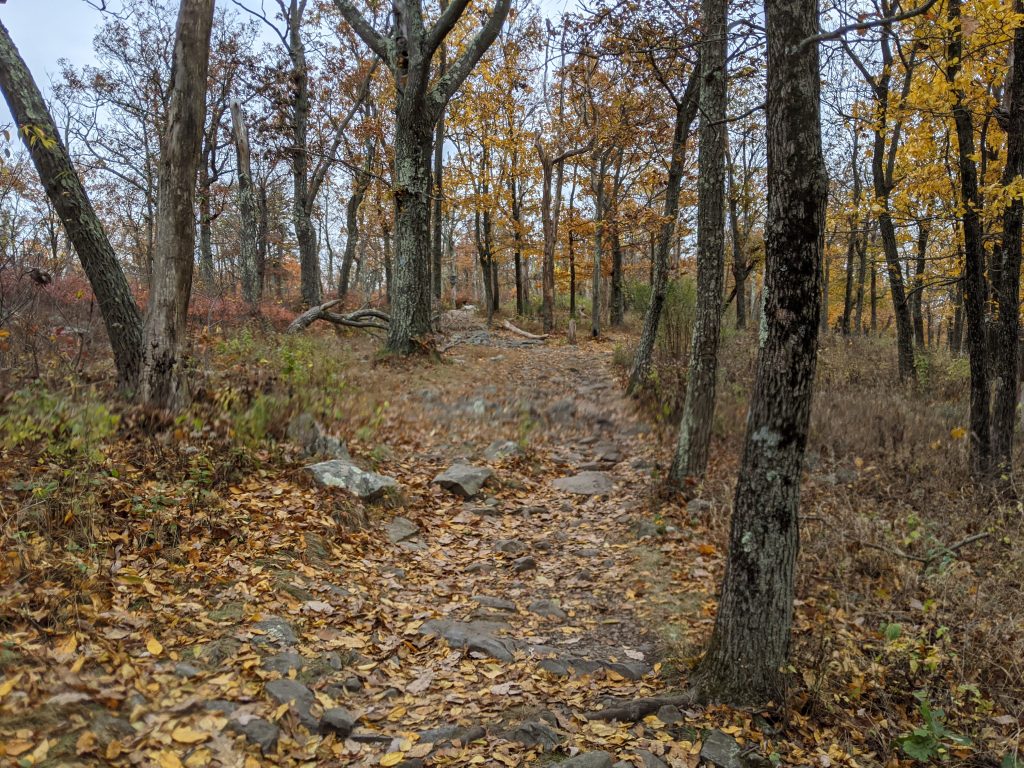 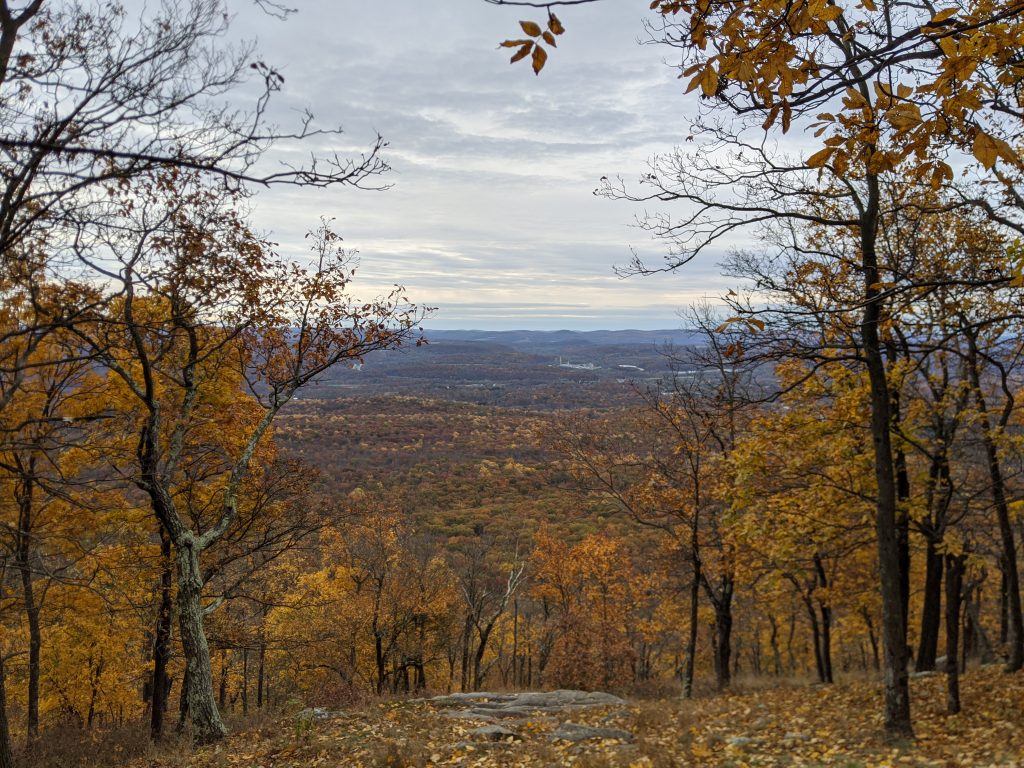 And then, it’s all downhill from there.  Welcome to New Jersey trails: 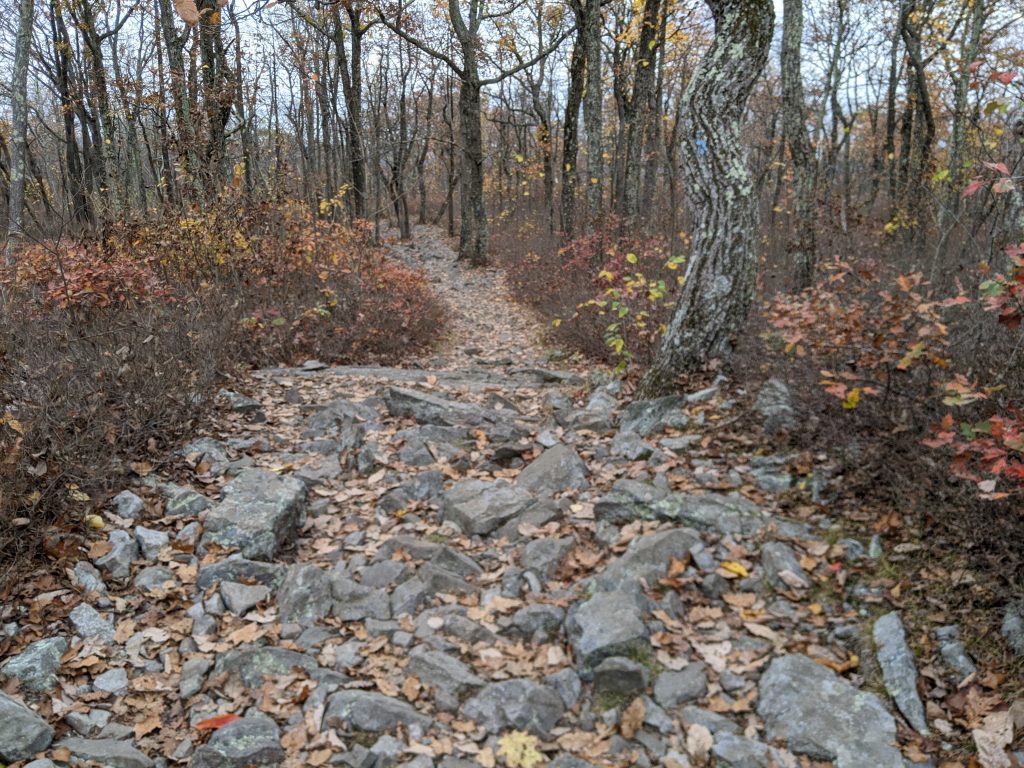 I stepped off the trail to let some hikers ascend, and found the following off trail:

On the way down I came to a section where all the leaves were down.  This area is about a week ahead of where I live in terms of colors and leaves on the trees. 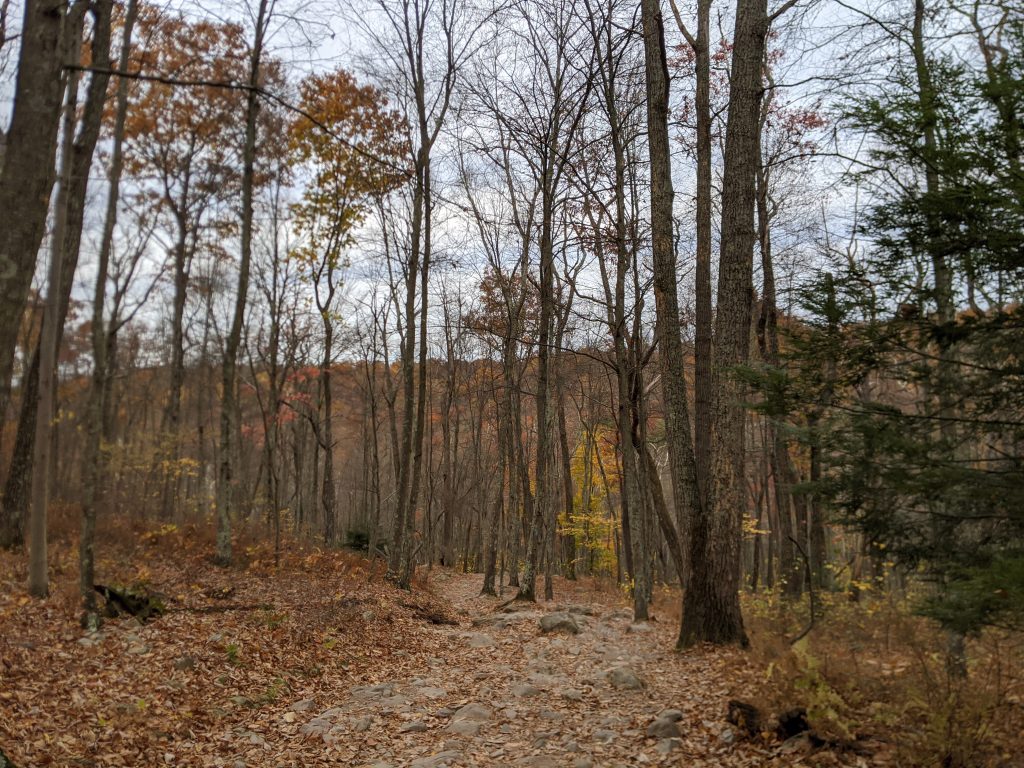 Eventually, I merged with the Green (Dunfield Creek) trail.  I’ve always liked hiking by Dunfield Creek. It’s a little darker, as the sun is blocked, and the sounds of the creek follow you in either direction.  Plus, the trail is much flatter, with less rocks. 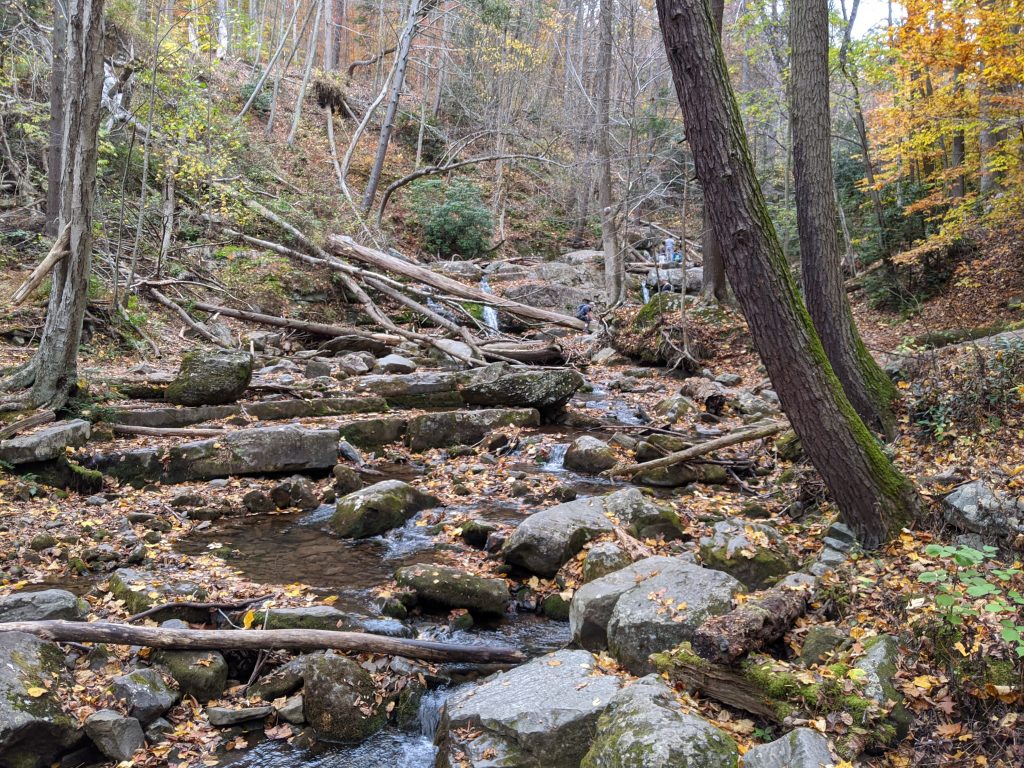 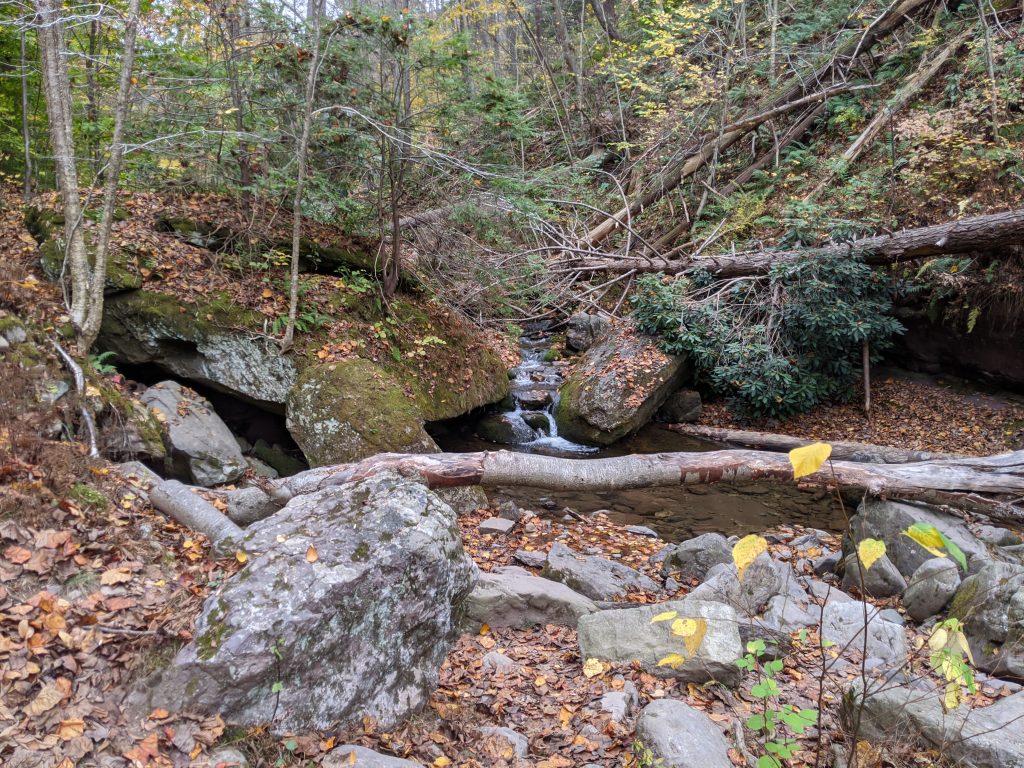 Just before the parking lot, there was a grove of brightly-colored trees. 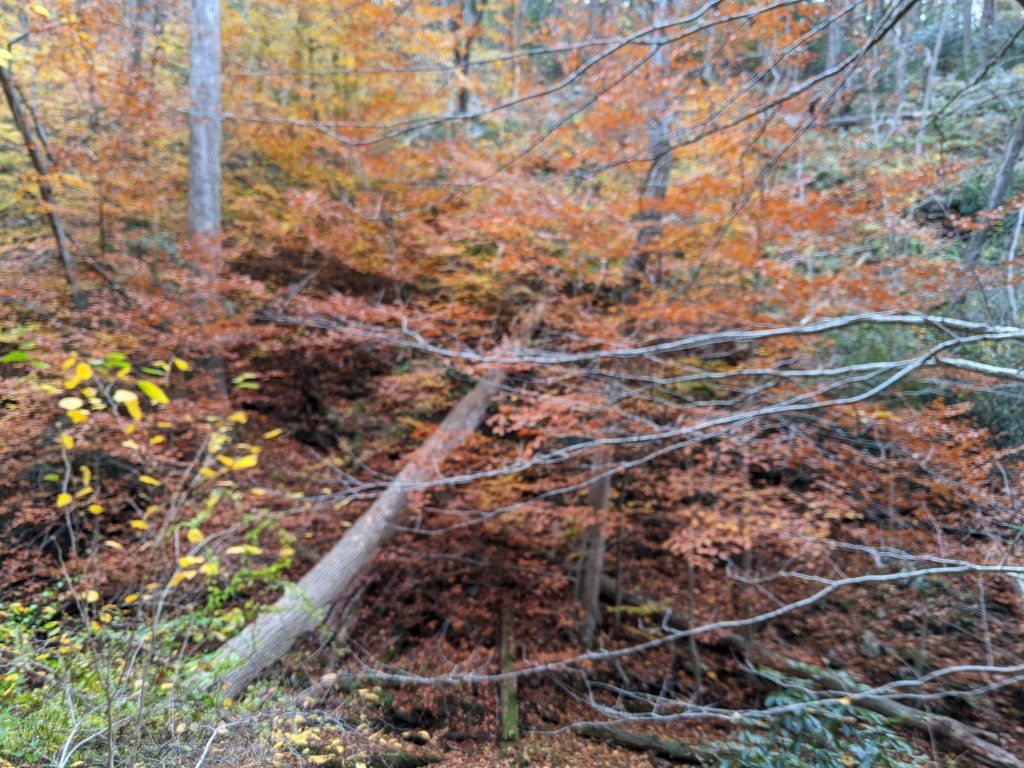 This is a fun hike, the view is definitely worth it.  I could do without the crowds, and have only myself to blame; as I called an audible to come in the first place.  Make sure you either arrive early or come on a weekday.  When I got back to the visitor’s center, every space was full, including along the visitor’s center road (this was around noon.) 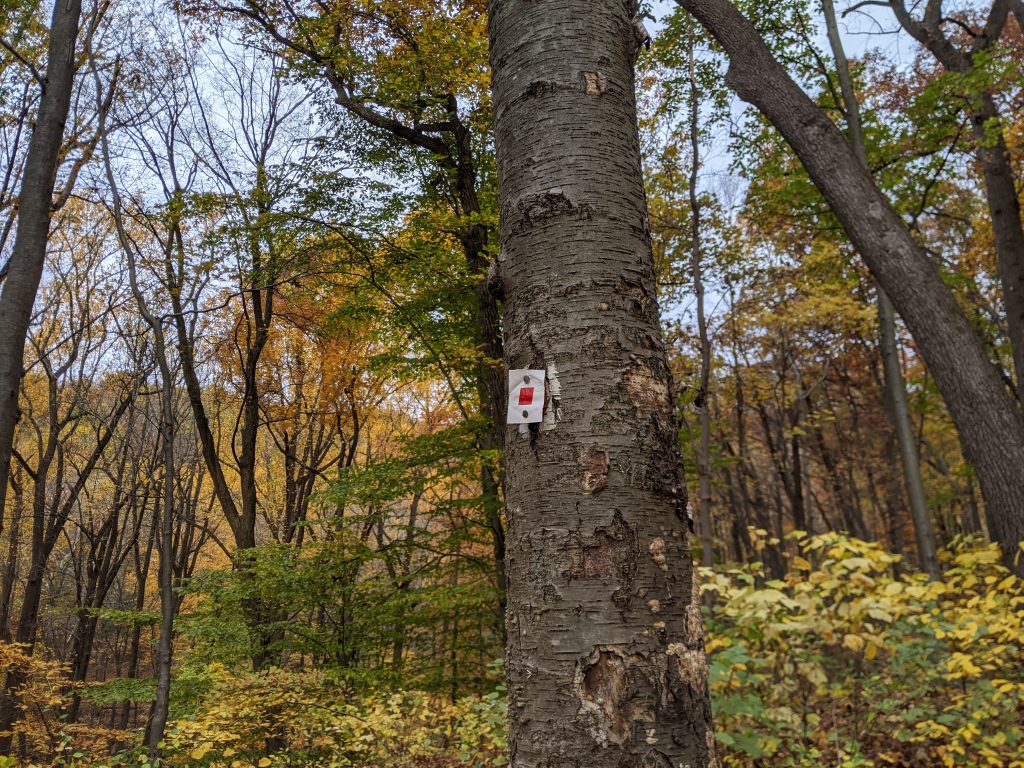 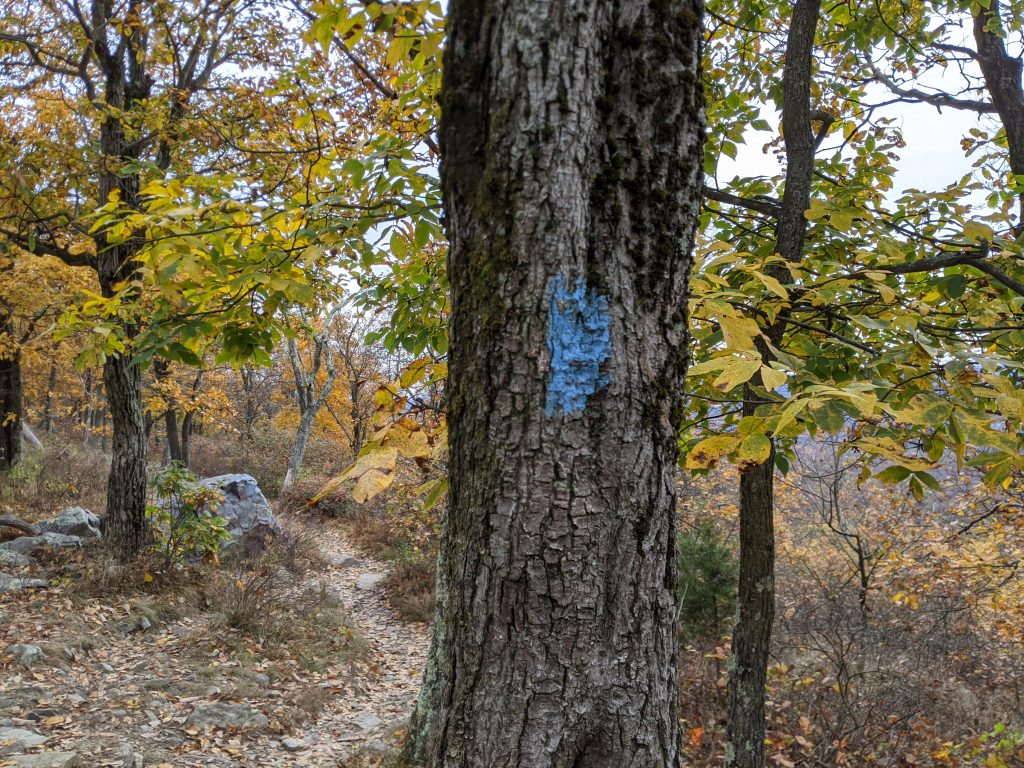 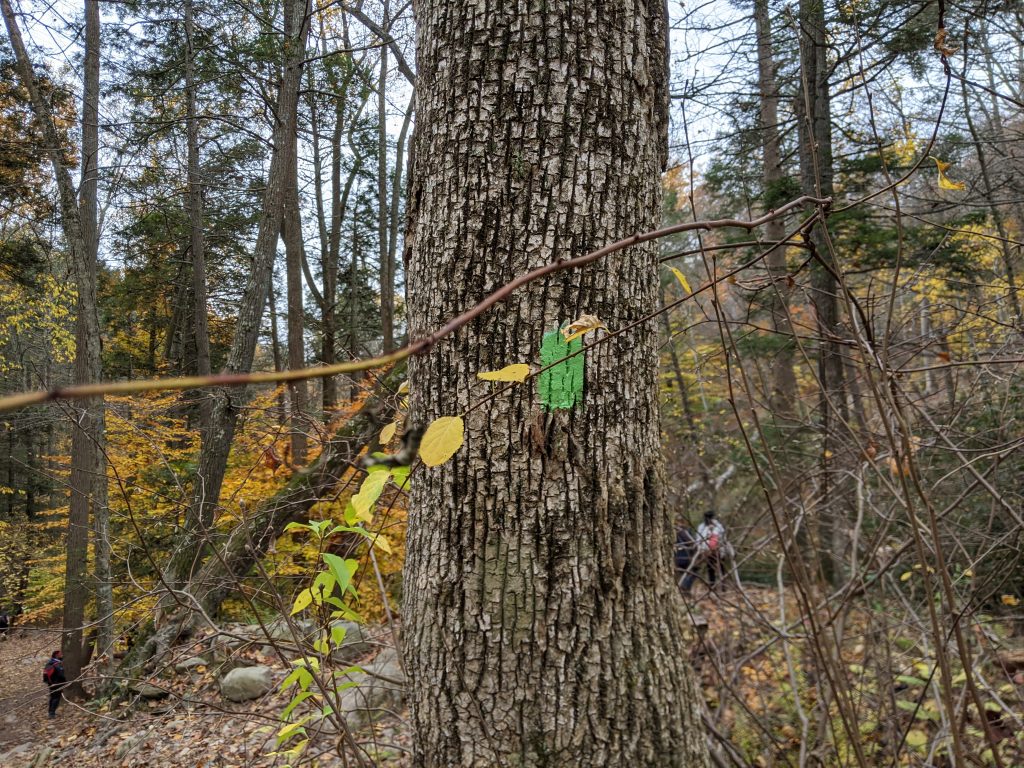 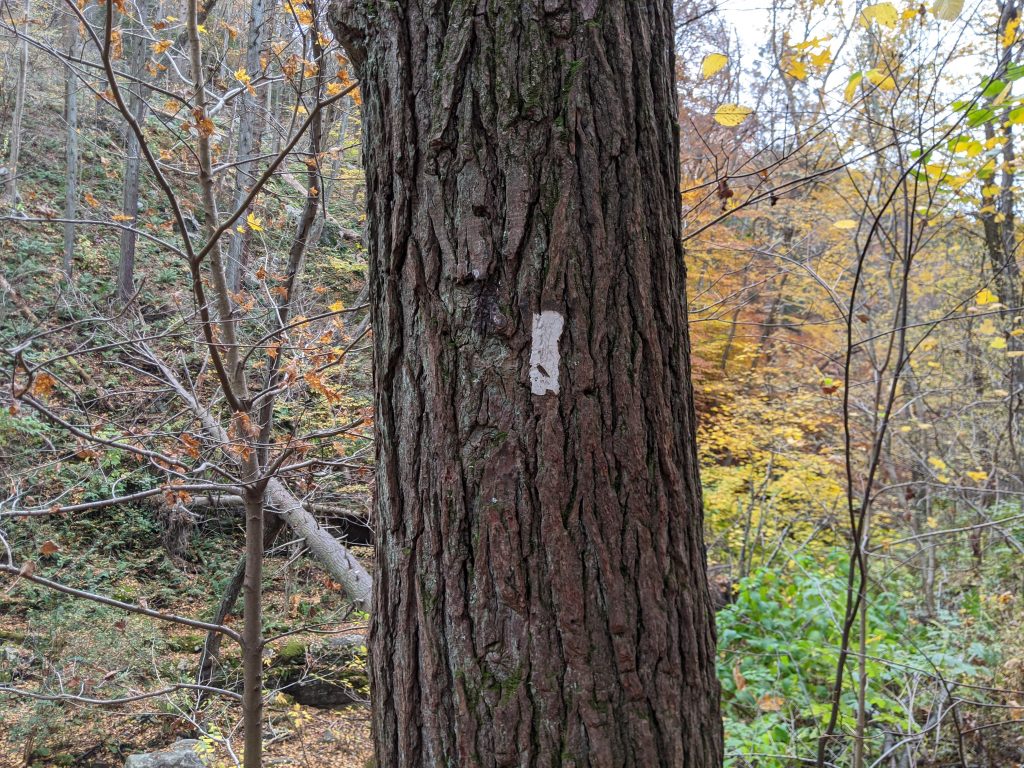