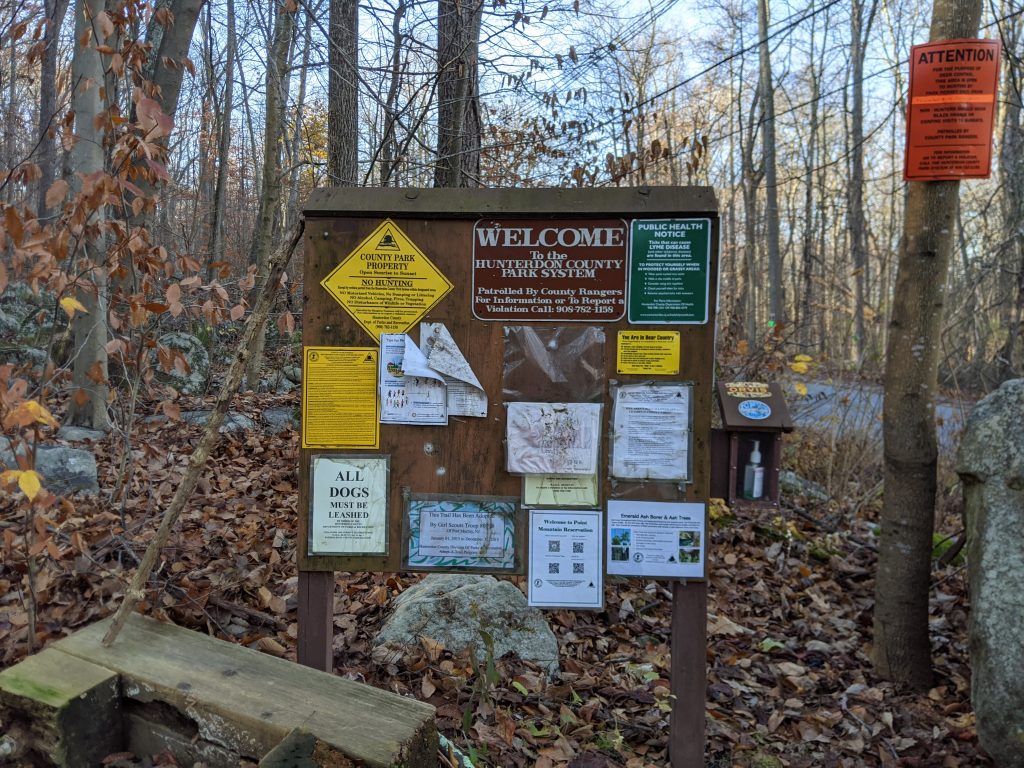 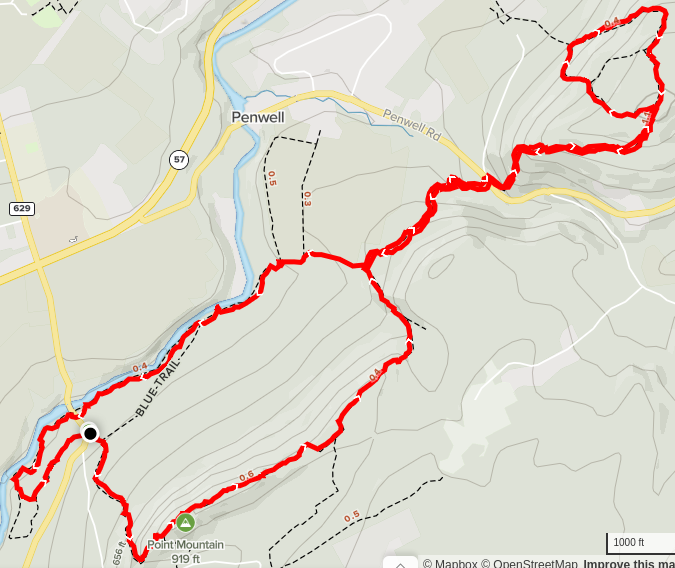 Point Mountain has been a place I’ve been to a couple of times as I dropped off and picked up my daughter from Camp Bernie.  It was time to climb to the viewpoint and explore the park.  Arriving at the trailhead, it was in the mid 40s, yet when I reached the viewpoint, it was already in the upper 60s.  The sun felt great, and I’m not going to complain about 70 degree weather the first weekend in November.

I have some mixed emotions about this hike, which I’ll get to.  However, know that practically all of the leaves are down (which hasn’t happened yet at home.)  This was a blessing and curse – the curse to be revealed later.  However, as the ground and surroundings are brown, anything non-brown became picture-worthy.

From the trailhead, start on blue (for a very short time) until orange splits off. 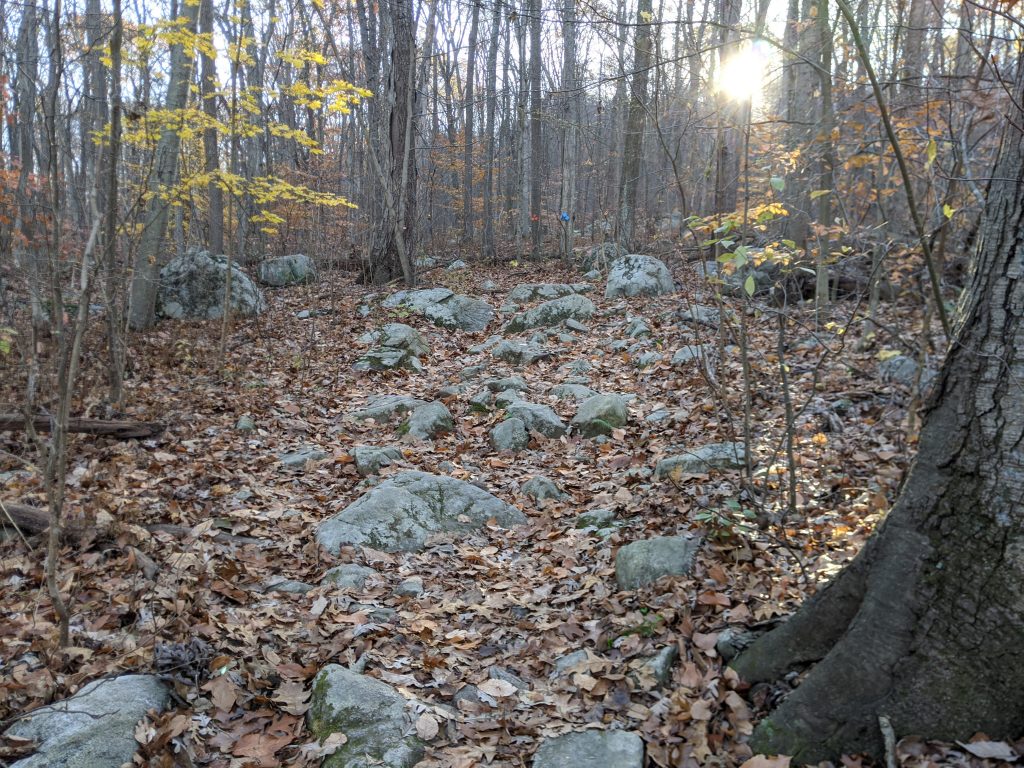 And those were just within the first 100 feet.

Orange splits off, and you can see what you will be in for as the trail works its way up to the top. 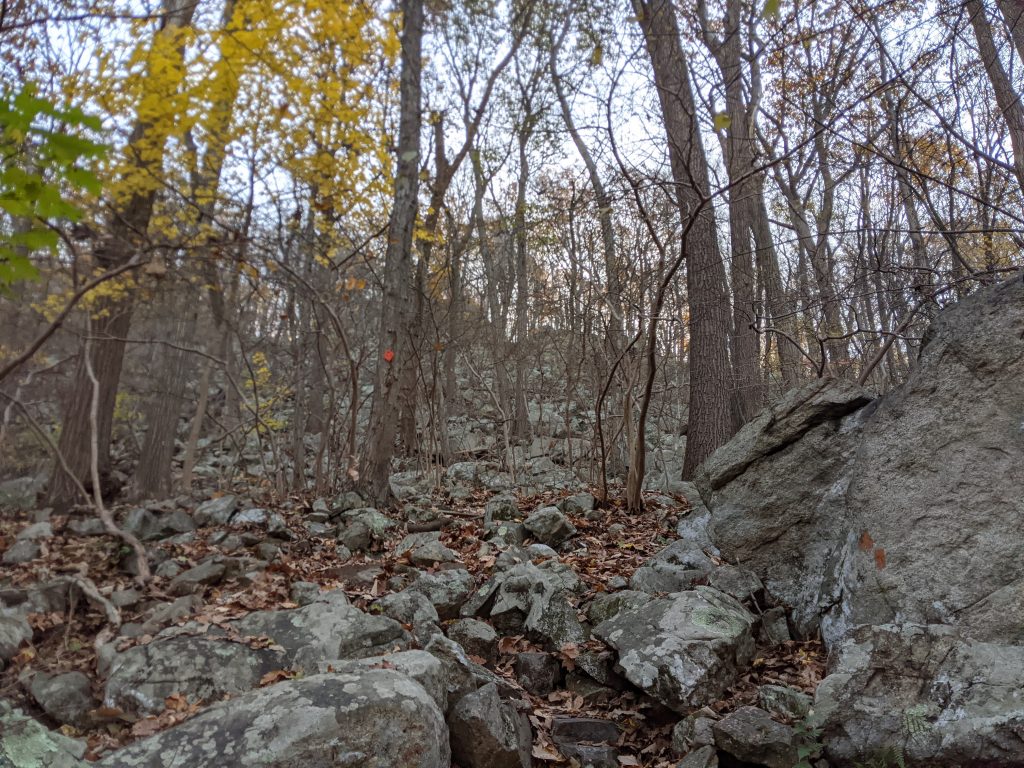 Ultimately, you will wind your way around to the right, and come up the shoulder.  Once to the top, there are numerous viewpoints looking north over the farmlands. 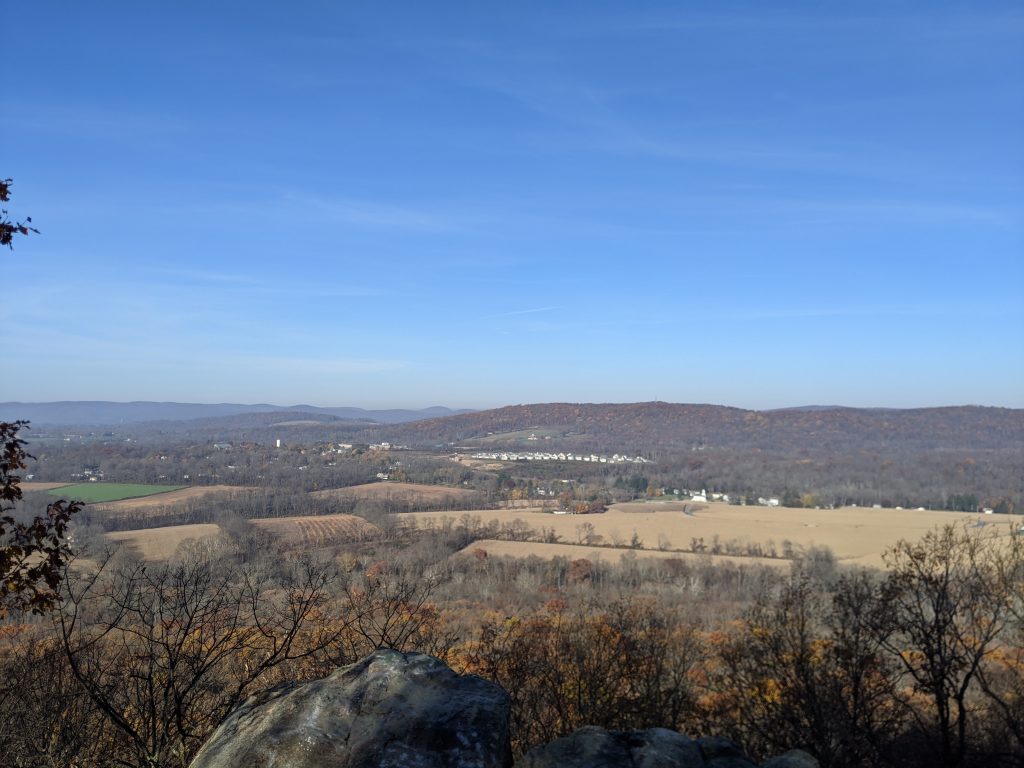 The Orange trail leaves and meanders northeast along the ridge.  You’ll see a couple of rocks to scramble out on for more viewpoints.

The ridge walk was especially pleasant as temperatures had really warmed up.  The trail was easy to follow and you can see views off to your left.  To the right is all forest and an army of squirrels gathering food for the winter. 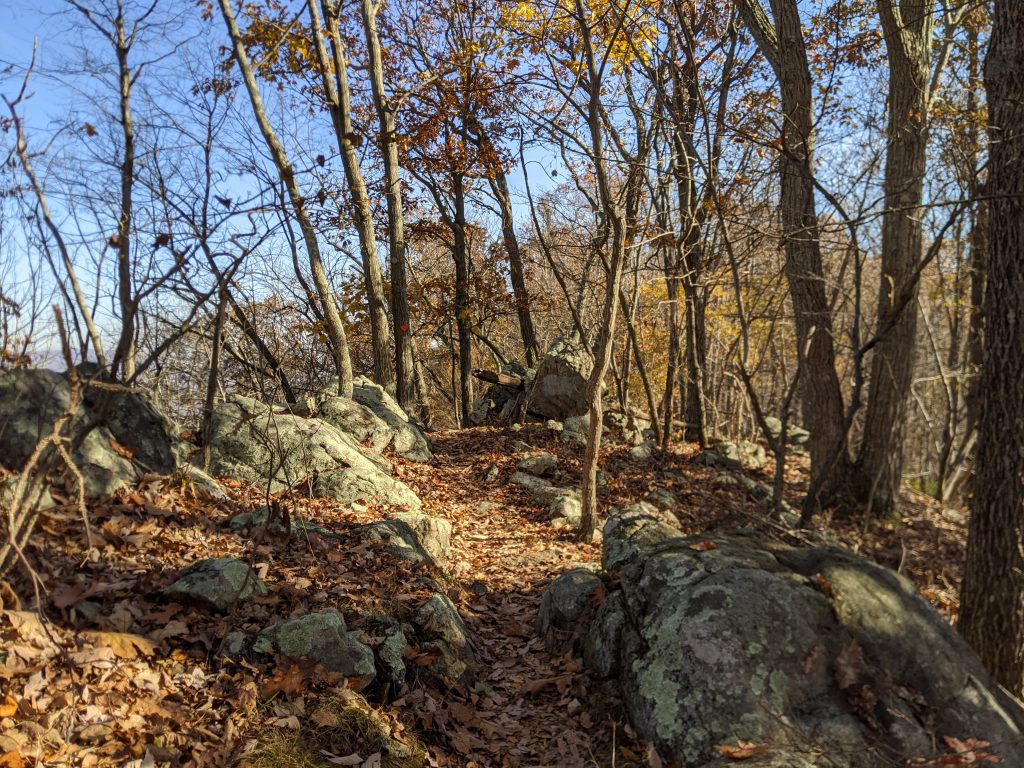 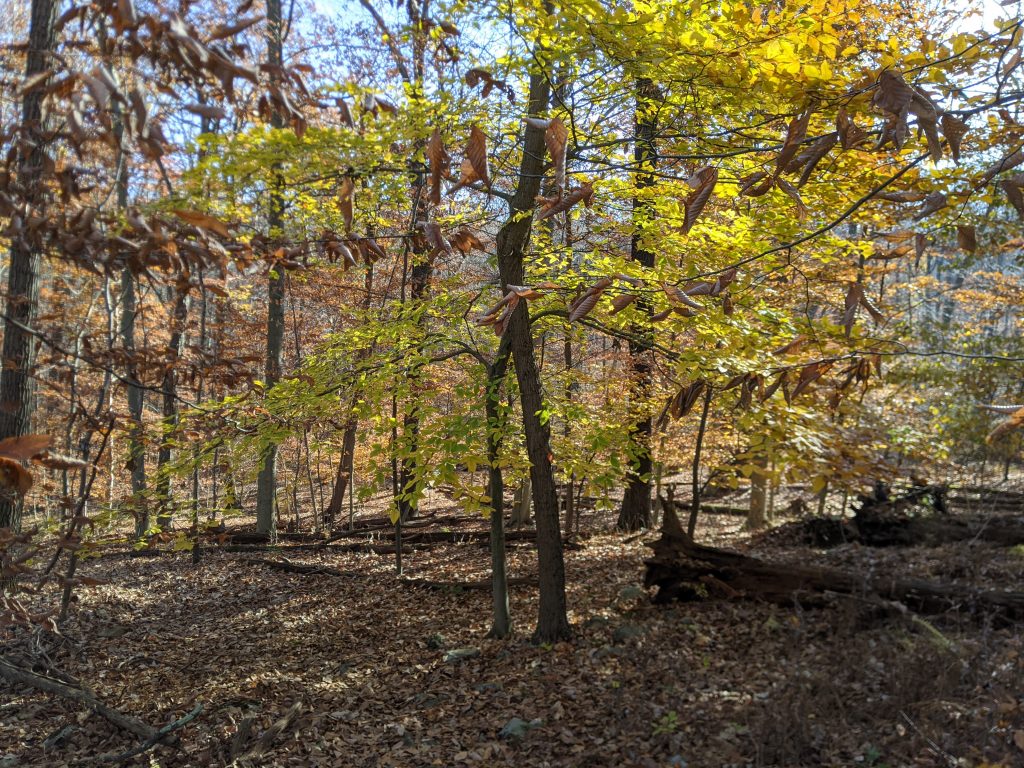 As you descend, you will reach an area with a small stream crossing. 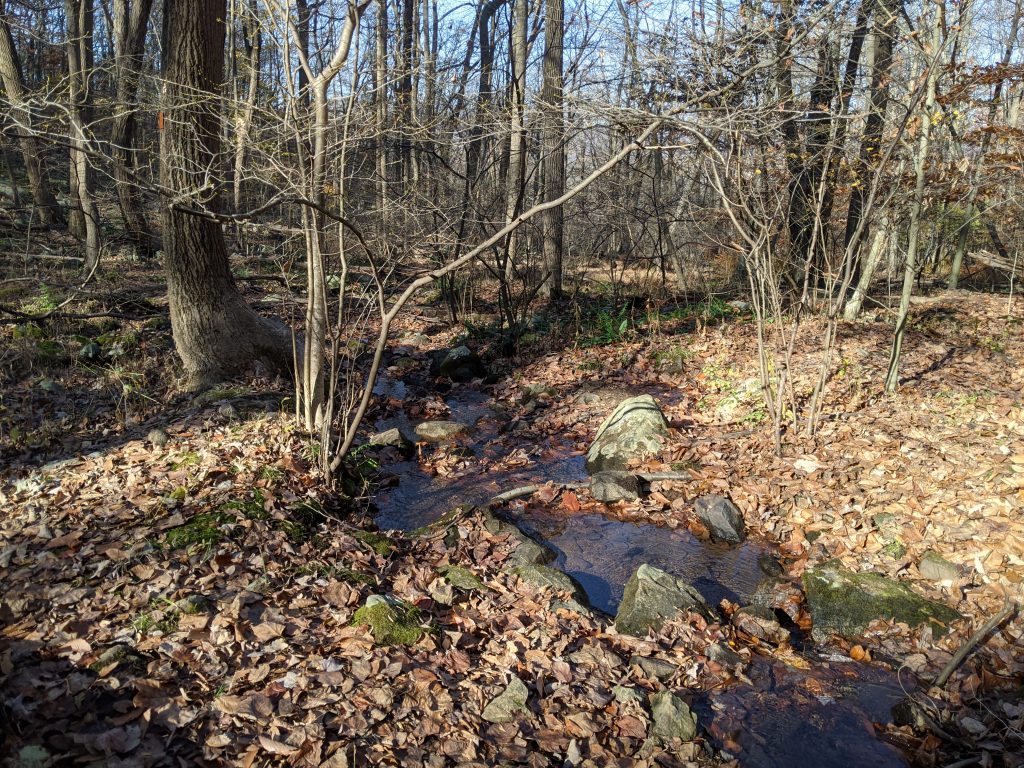 I took the White trail north heading into the Northern Section of the park.  This trail was well marked and easily followed.  I had read that there were sections that were overgrown, I did not find that to be the case today.  As the trail emerges by Penwell Road and a creek, I found these Turkey  Tail fungi. 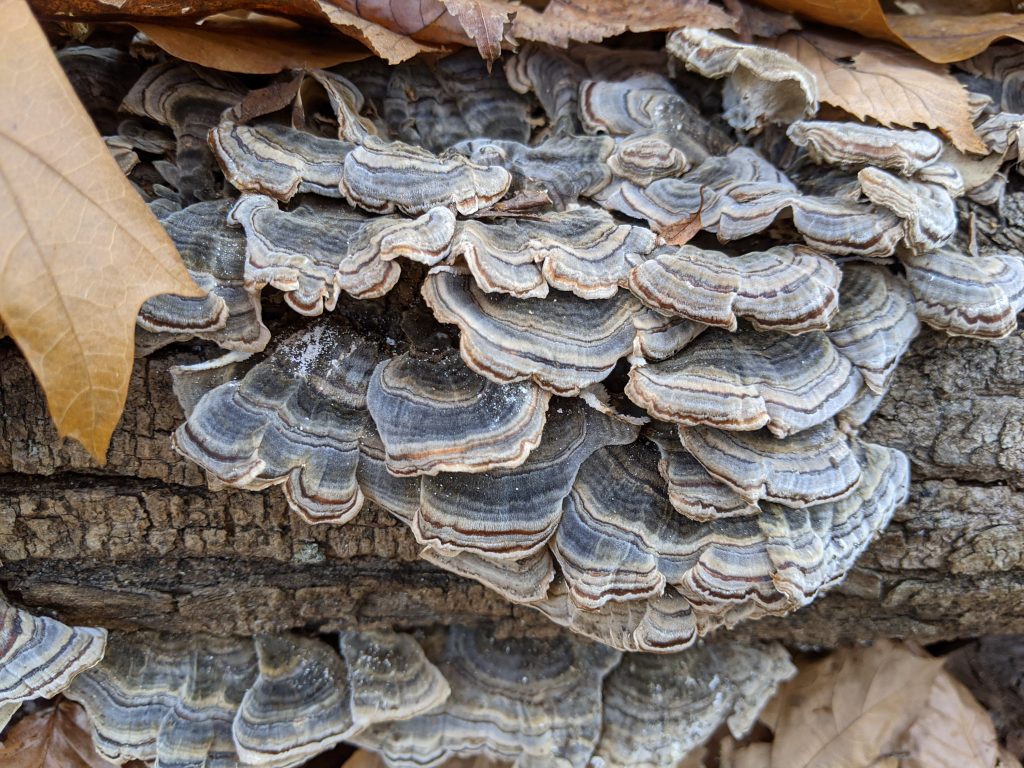 This tree was covered with Turkey Tail. 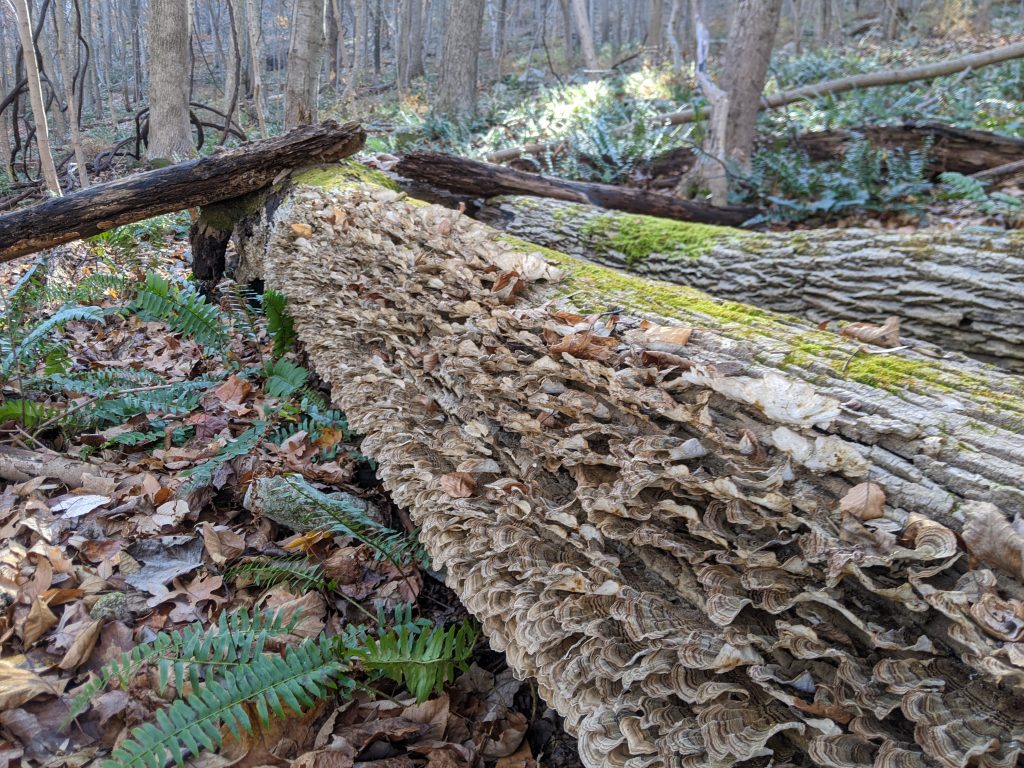 The trail comes out on Penwell Road and it is not immediately obvious where to go.  Cross the road, and head to the left.  There is a private driveway, with a “No Outlet” sign.  Just to the right is a large cairn marking the continuation of the trail. 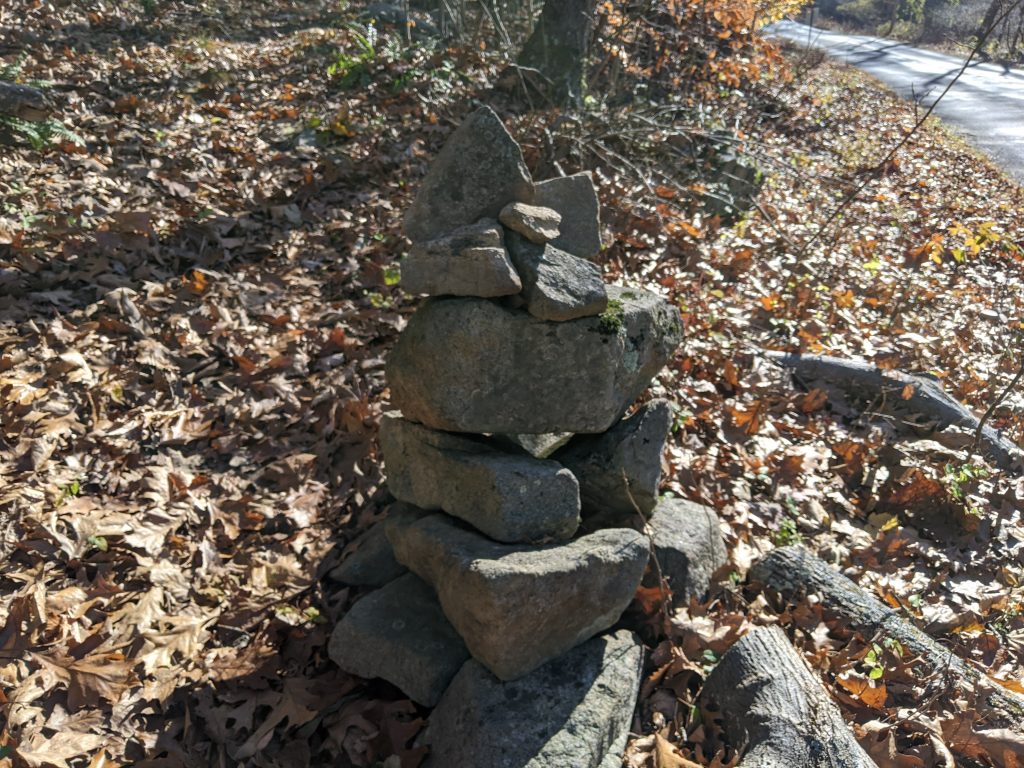 Head up.  It’s another climb.  And at this point, on this day, all the leaves were down.  I felt like I was wading through water.  The leaves were knee-deep in some parts, and it was very easy to lose the trail.  I’m pretty sure I was off trail quite a bit.  Essentially, I hiked blaze-to-blaze, when I saw the next blaze, I walked to it whether the trail could be seen or not.  And, it was very loud, with all the leaves.  Coming down I figured would be treacherous.

I took the White, which crested the mountain, then descended, to the Blue, to the Red, which connected back to the white.  On the red you go through a large stone wall. 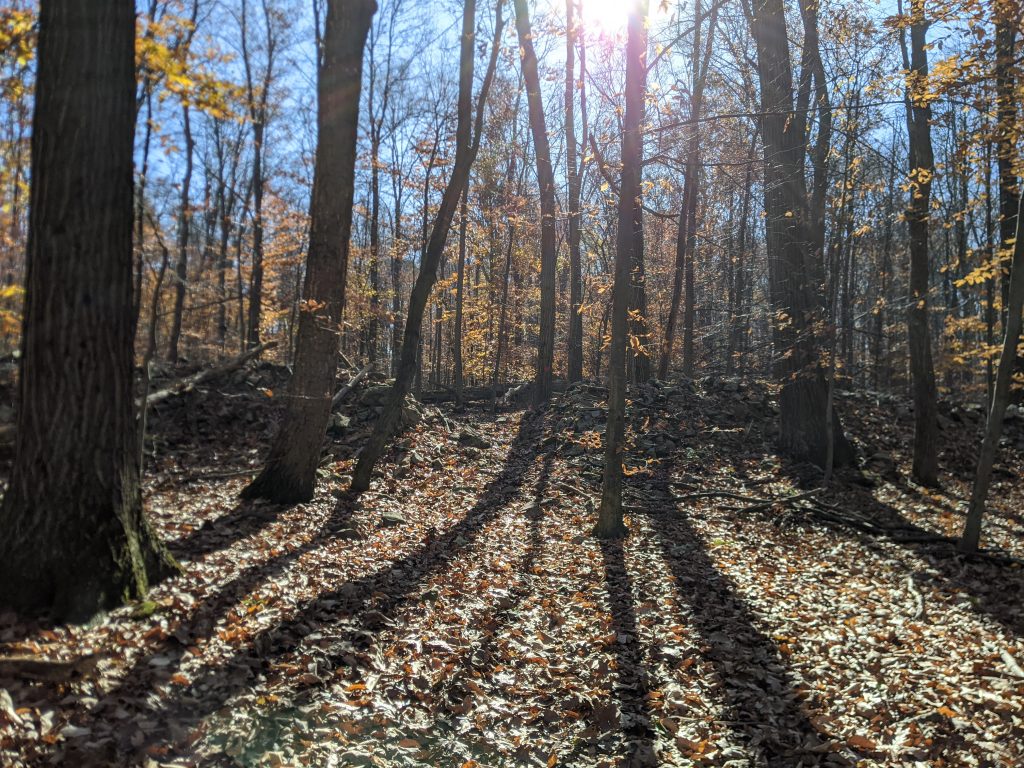 I backtracked on white to eventually get off the mountain, and head back to the central section of the park.  What I found interesting is there a section of the white trail where it appears that someone walked with a portable blower and blew off the leaves.  It’s only for about 100 feet or so, and you can see where this person’s trail heads back towards private property.  It was a welcome, brief, respite from the noise. 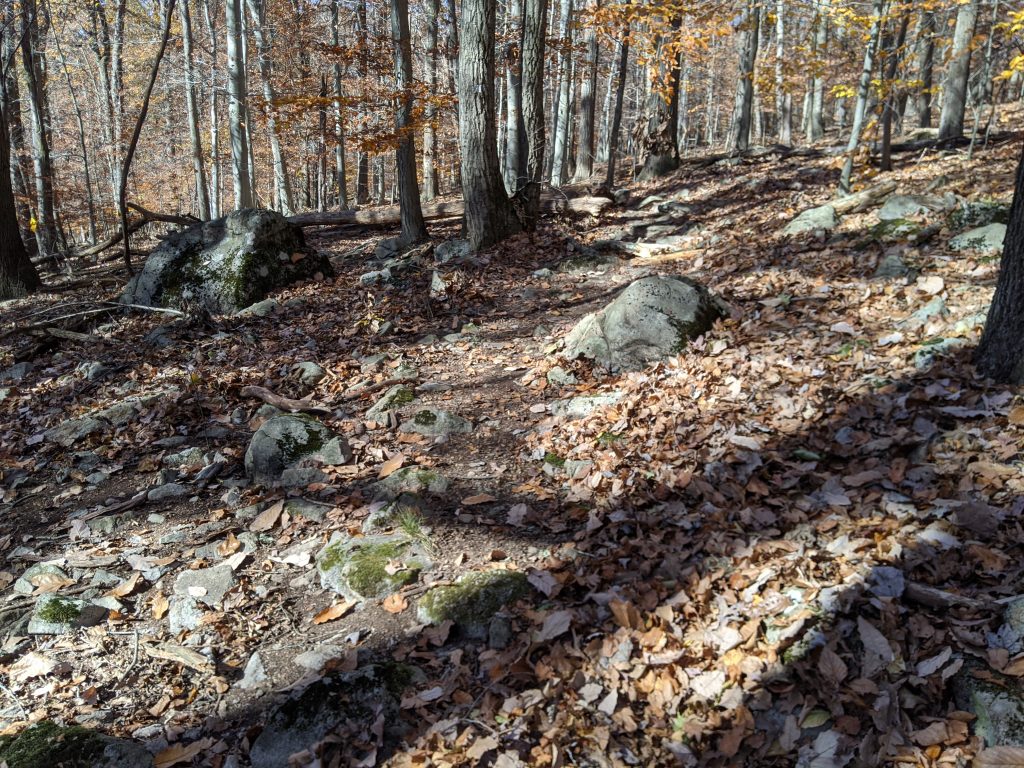 Back in the central section of the park, I continued on Orange until it joined with Blue – which paralleled the Muscunetcong River. 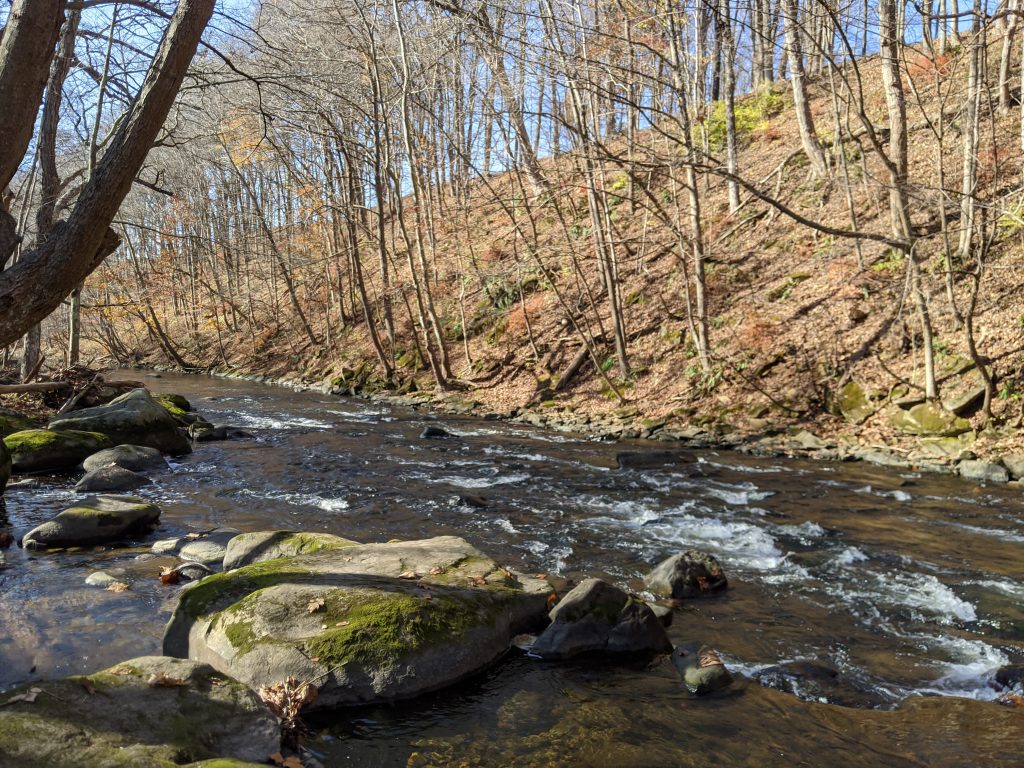 While walking this section there are many nice rocks to sit on, take a break, and watch the river flow by.

The Blue trail splits, taking the left fork will take you back to where you parked.  I went right and followed the river a bit more.  Eventually the bridge comes into view. 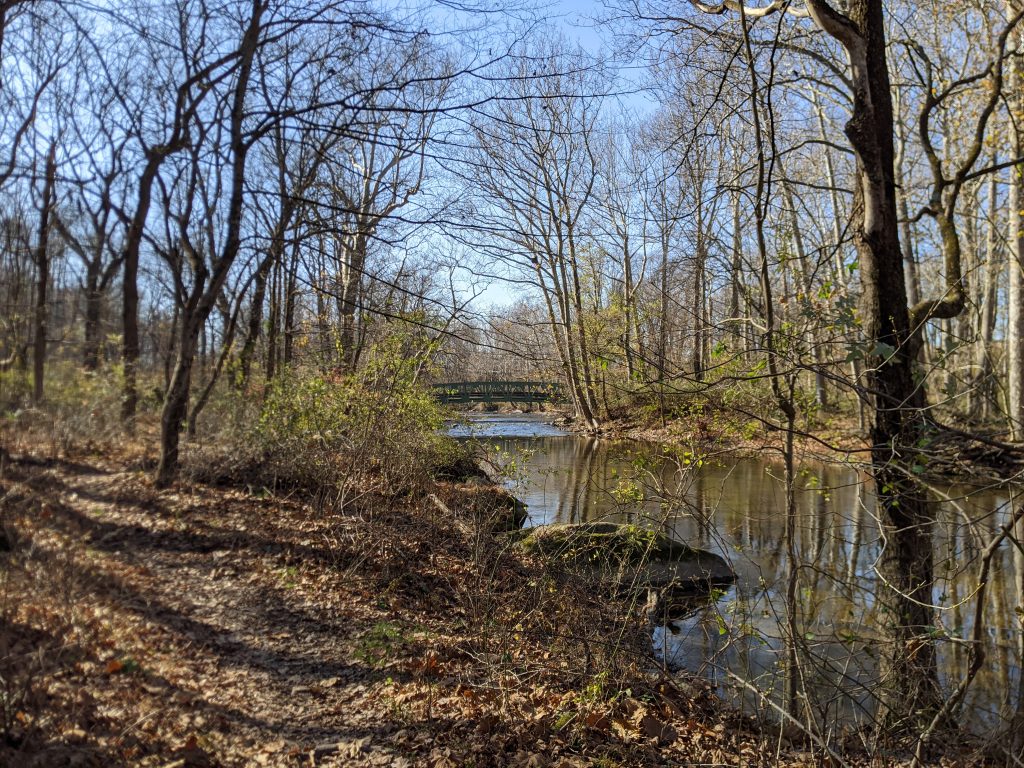 I decided to cross the road by the bridge, and finish up that last section of the blue trail.  You can see by my map that I didn’t finish the whole trail.  There was a huge blowdown obscuring the path.  Also, this section is wildly overgrown, and you don’t want to go off trail.  I’m sure I picked up a hitchhiker here.  On my way back, there were so many leaves down, that I’m sure I was off trail in spots.

The lot was full when I reached it after finishing the Blue trail.  And it was warm, in the 70s by now.  All in all, I really enjoyed the Central Section of the park.  I do not think I would hike the northern section unless it is before the leaves dropping.  I did not see a single person on this hike until I reached the river, and back at the lot.  I would definitely hike to the viewpoint again.  Trails were well marked, and aside for the overgrowth and leaves, were easy to follow. 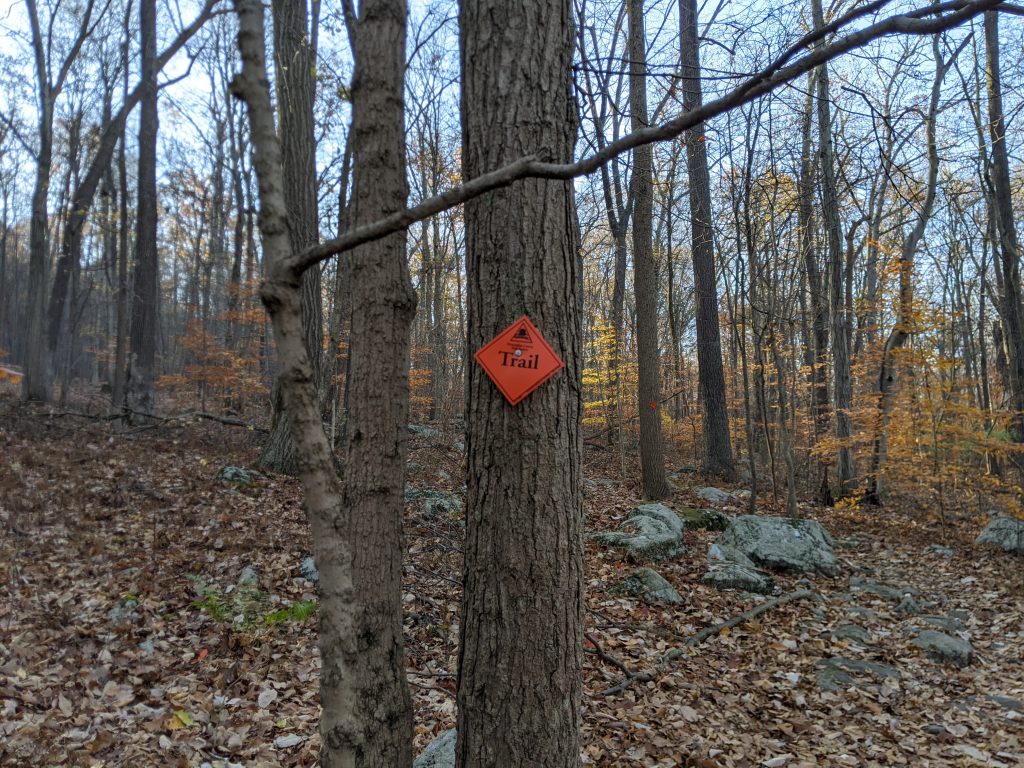 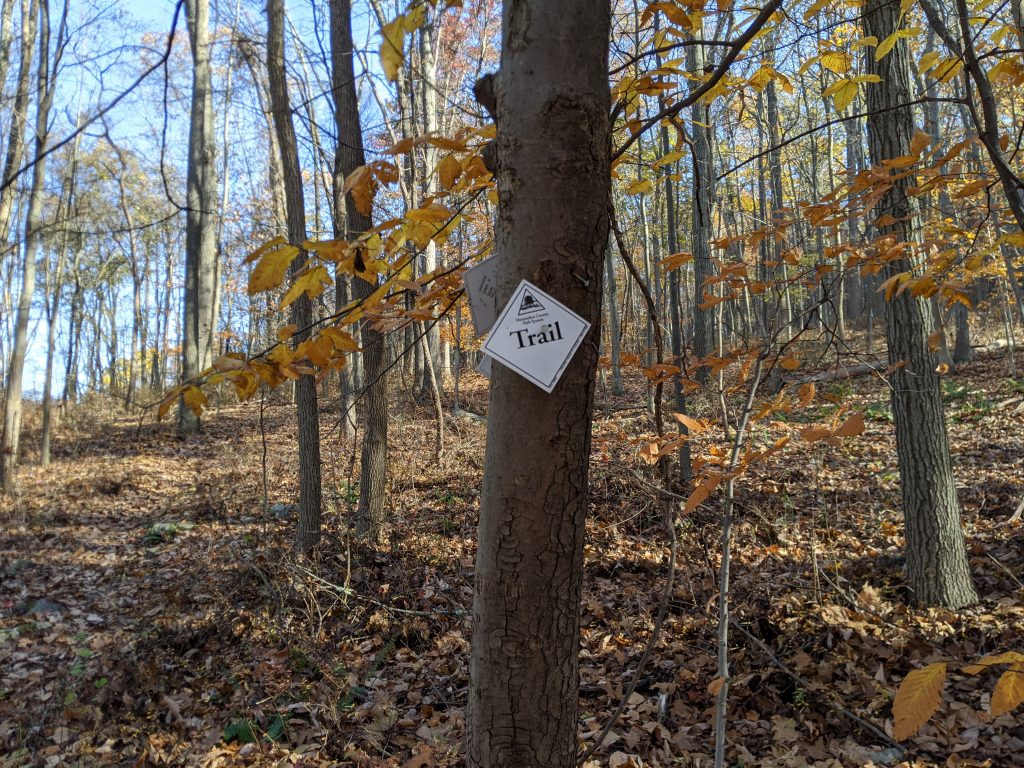 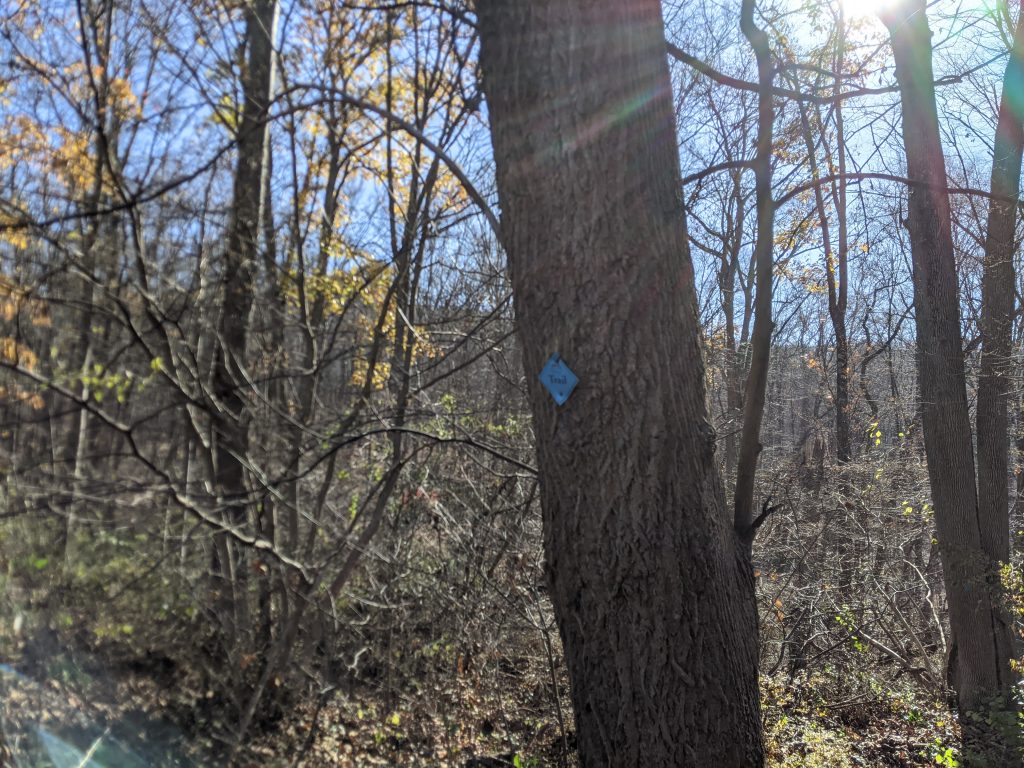