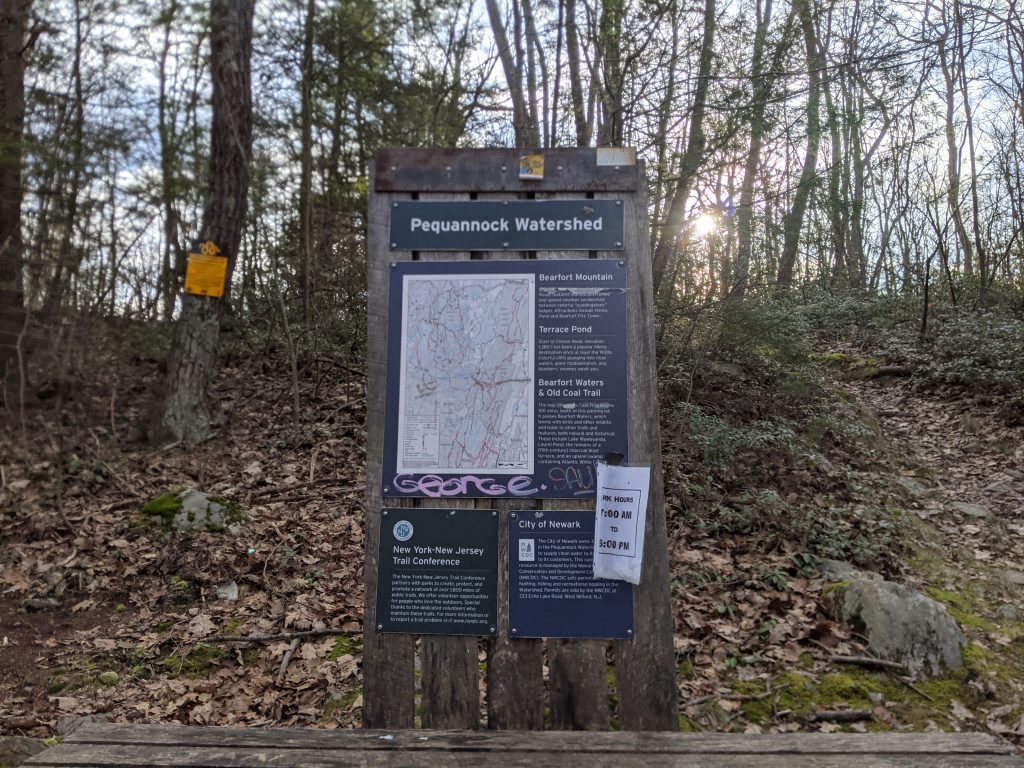 Park Site – a note here:  The trails are located in Wawayanda State Park, however they appear on the Abram Hewitt map. 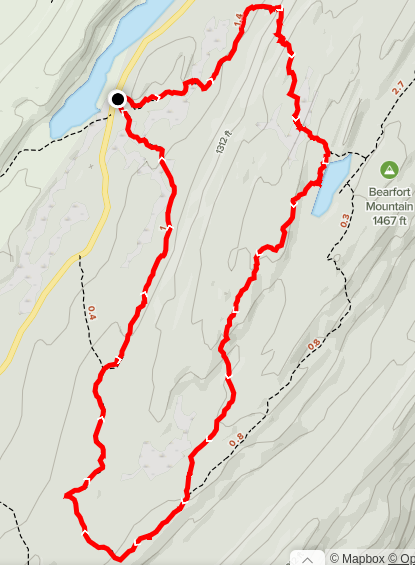 The weather was supposed to be nice, with rain coming in the week, so I figured I would head out again.  When I reached the pond, with the sun out, it was pretty hot.  But, overcast moved in, and the temperature dropped though out the day.  I did this hike clockwise, which put the scrambling and the ups and downs at the beginning of the hike.  As you move away from the pond, you will go downhill and finish up on a woods road, and a smaller trail.

A note about the pond, swimming is NOT allowed, not that I had planned it.  There is ample signage both at the trailhead and at the pond.    Bear in mind that much of the edge of the pond is surrounded by rock and if you get in trouble, search and rescue will take a while to reach you.  While I was at the pond, it was starting to fill up with people – hiking just to the pond is a nice hike.

A note on parking:  I got to drive on New Jersey’s most haunted road.  I had read about this road often enough in Weird NJ, so it was fun to actually visit this landmark.  I can safely say I didn’t experience anything.  Park in lot P-7, when I arrived at 9:00 in the morning I was the third car; when I returned a little after 12:00, the lot was packed.  Walk across the street to the trailhead.

The new blazes really stand out, and are spaced appropriately.  They’re easy to see – maybe because they are so new.  The hike starts out on nice wide trails, and early on you will cross some streams. 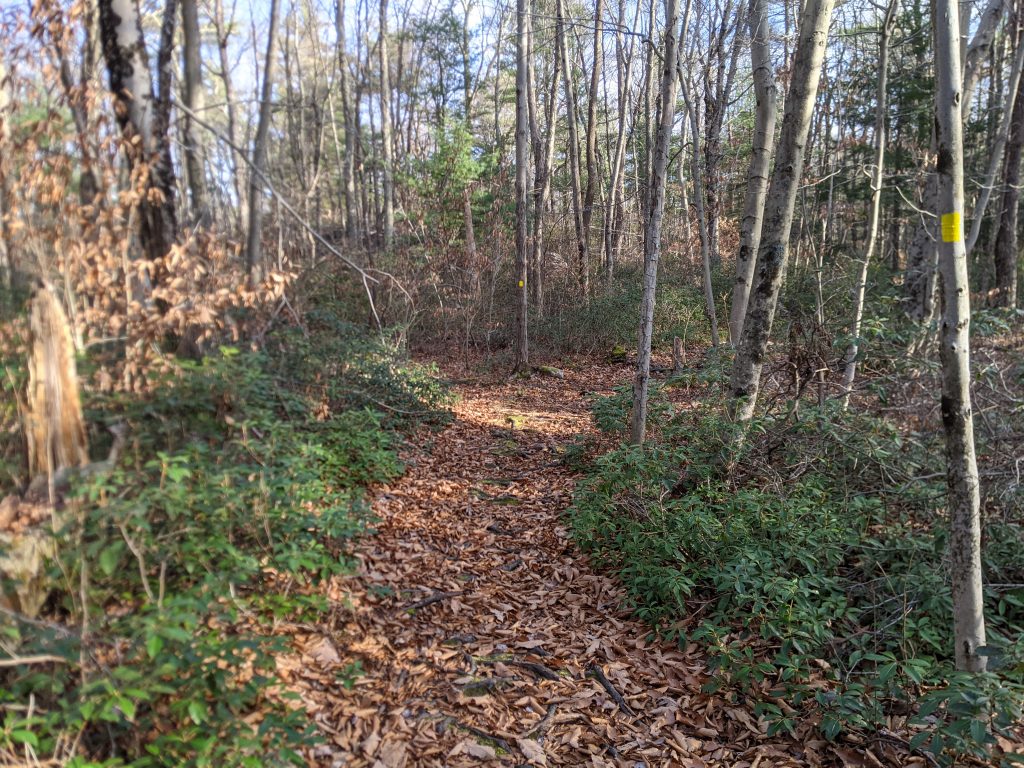 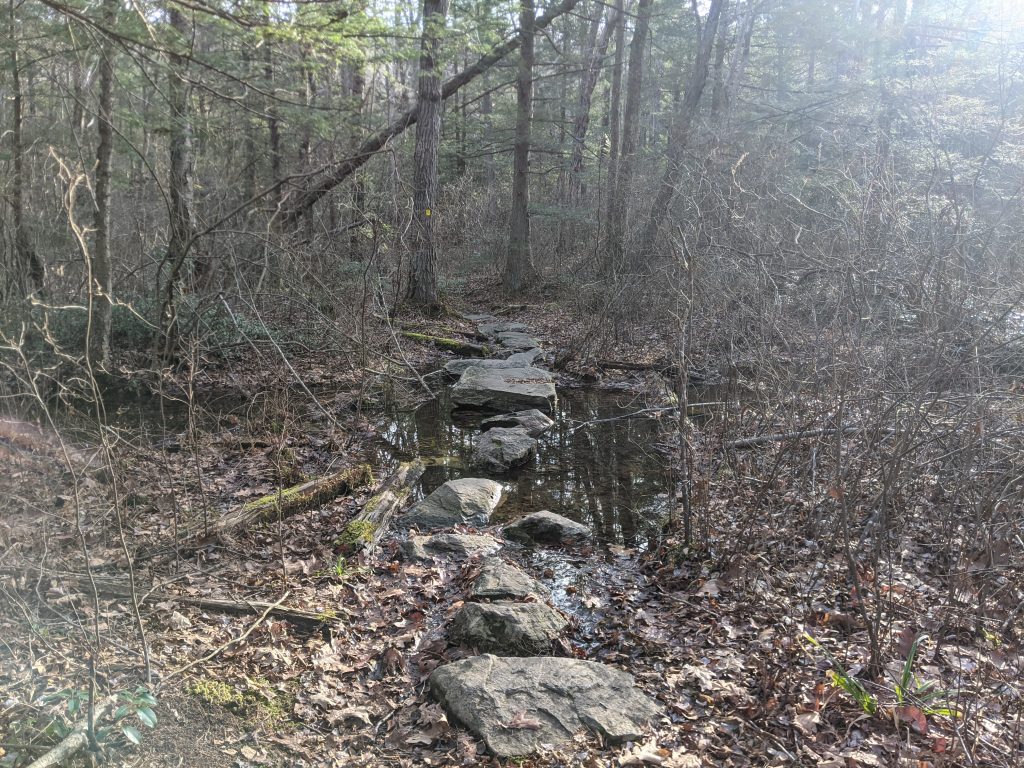 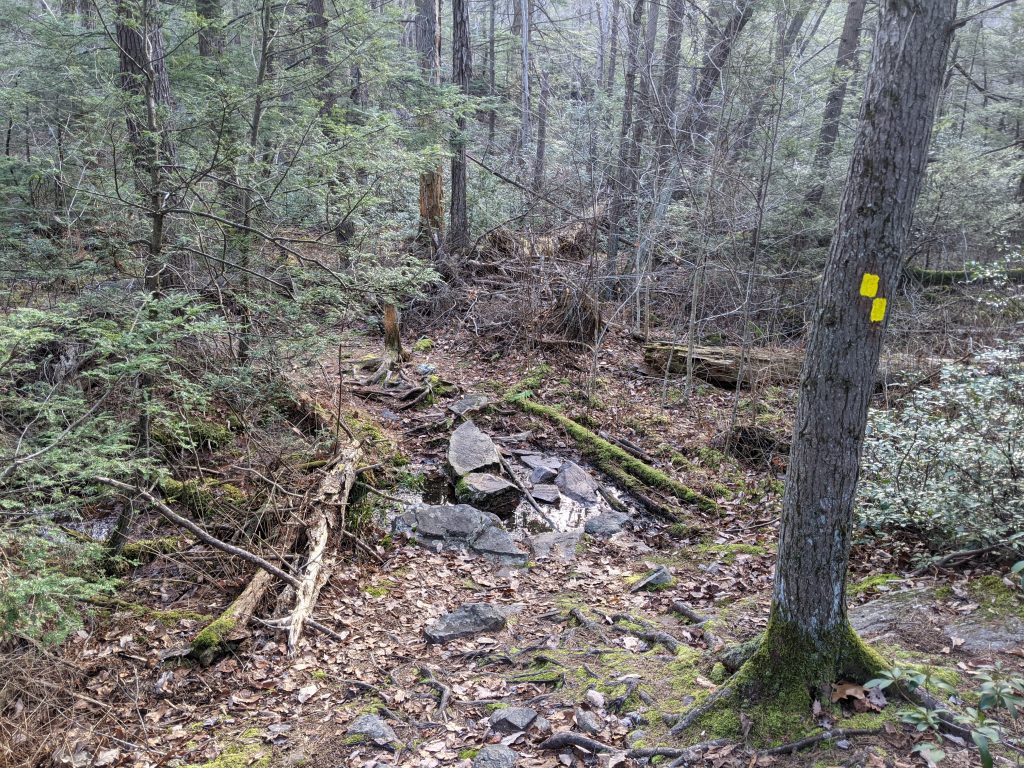 The big rocks are a nice touch.

After a short distance, you will arrive at a power-cut, make a right, and head up. 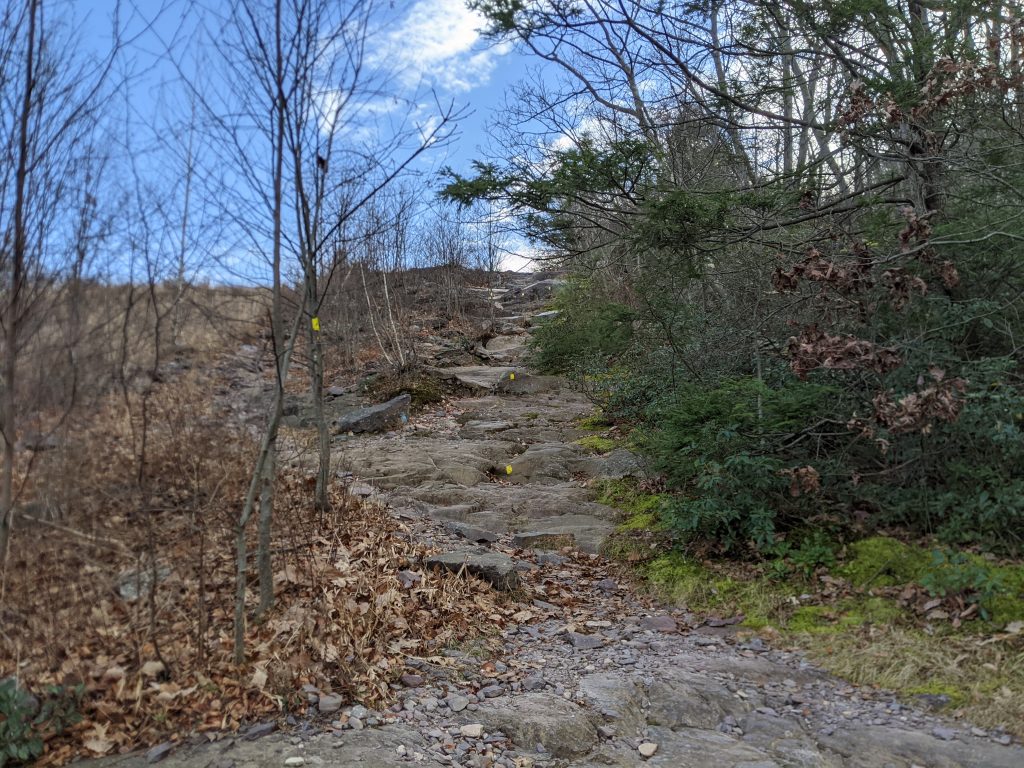 You won’t go up the whole hill, but will turn part way up.  At that turn is a nice view. 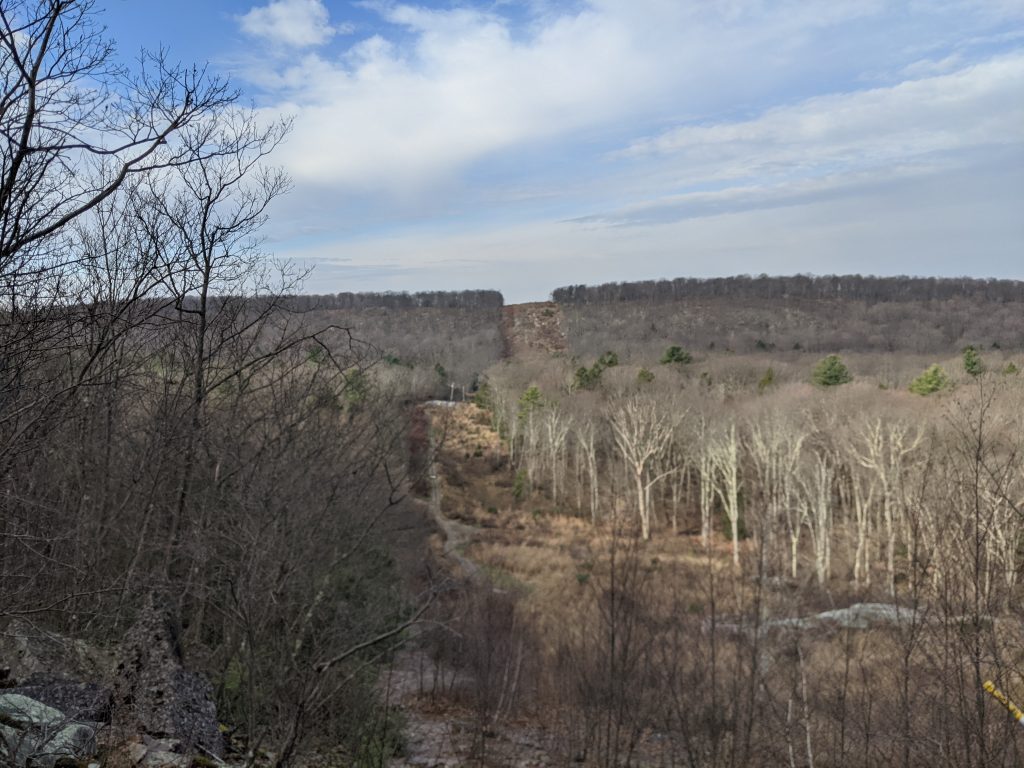 There will be a couple of good scrambles before you reach the pond. 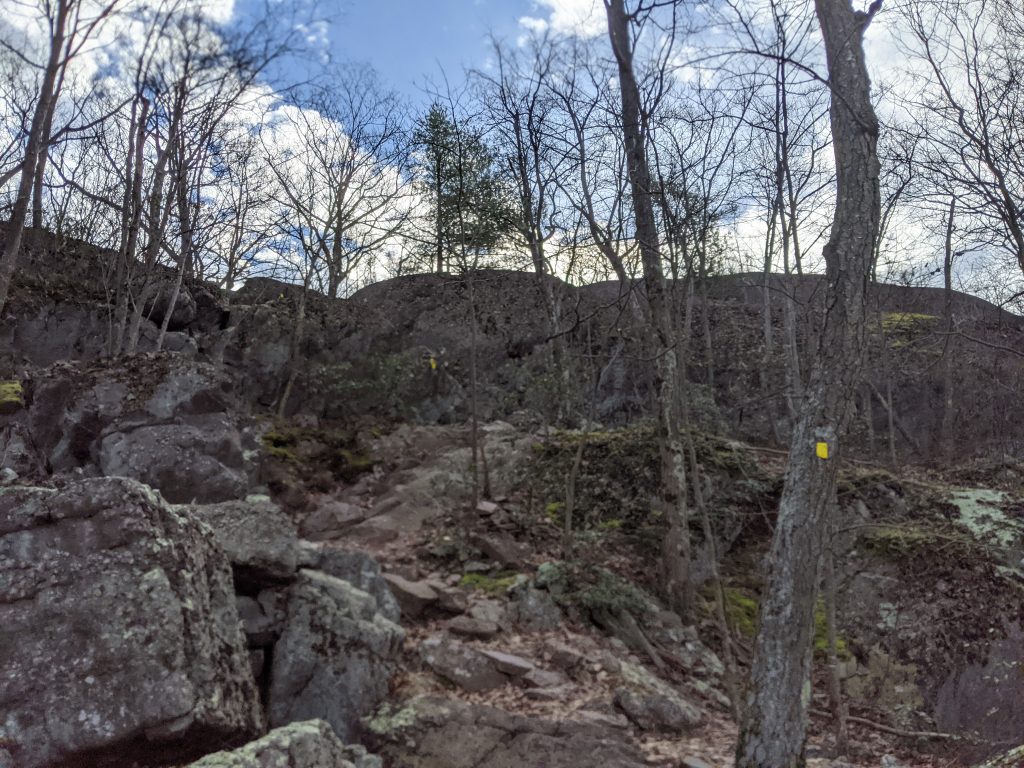 From the top of this scramble, there is another nice view. 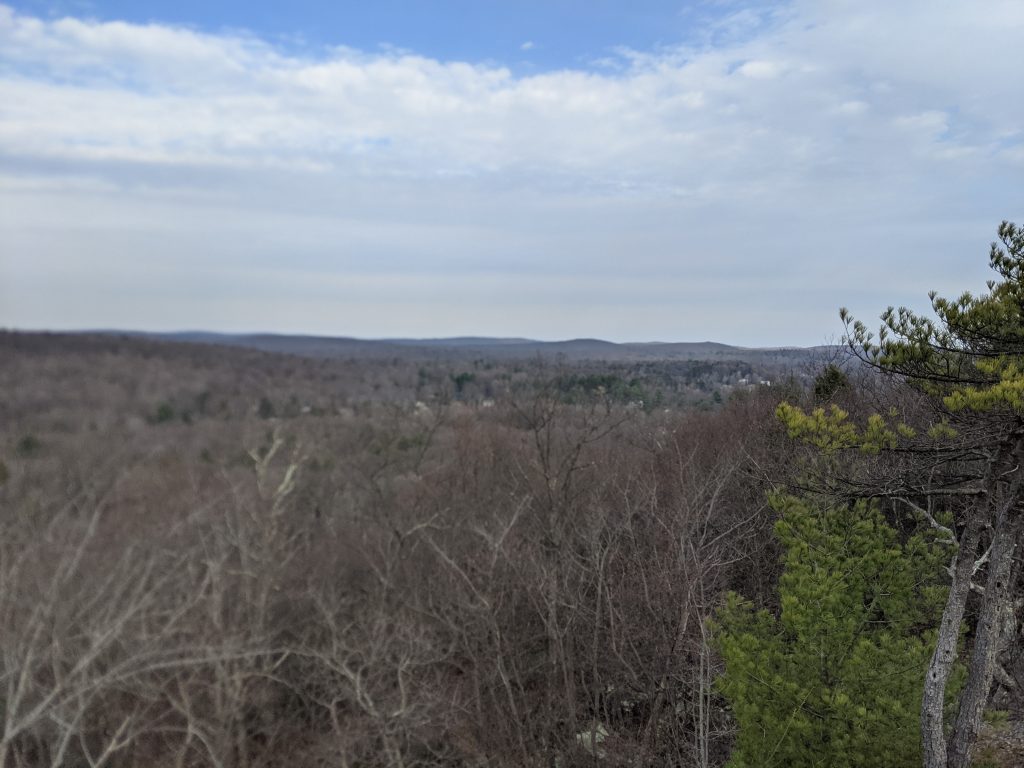 With leaves down, it’s easier to pick out anything not brown.  Unfortunately, no mushrooms on this hike.

Just before reaching the pond, there will be a good-sized scramble that ends at this fin-shaped rock. 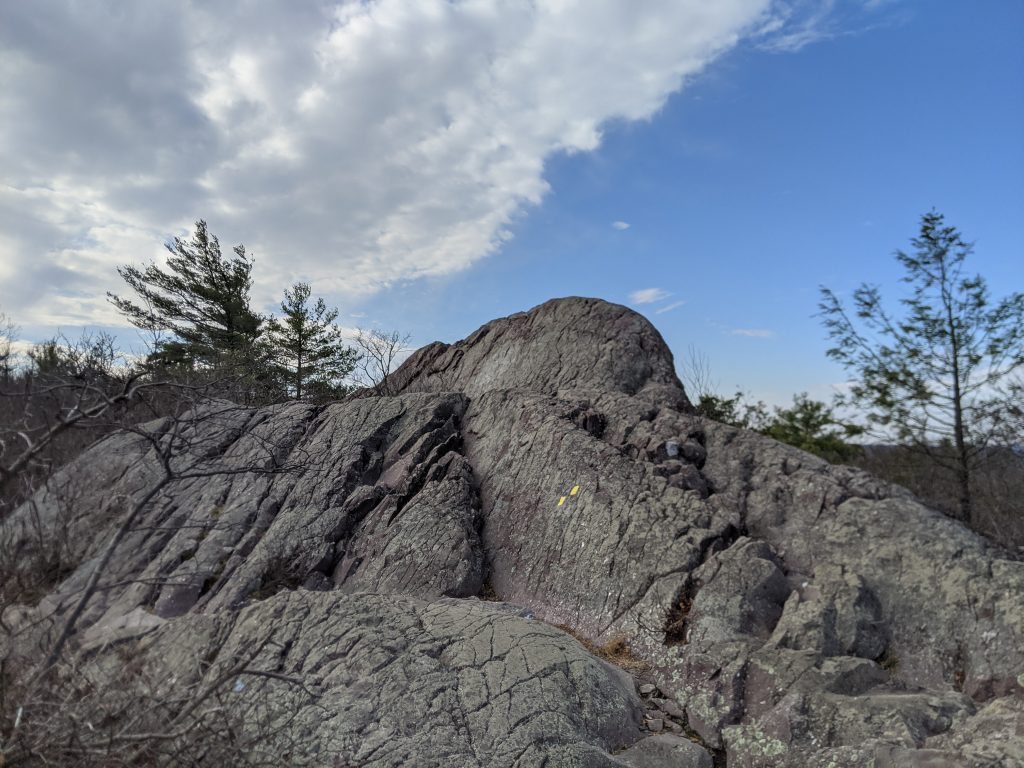 The trail goes around the rock, but you can scramble to the top for a great view.  I did not.  There’s not a lot to stand on, and a sheer drop on the other side.  Crawling most of the way to the top, I can vouch that the view is nice.

Eventually you will reach the pond, and connect with the Circular Trail (White.)  I put the pond about a third of the way into the hike.  While there is some minor scrambling after the pond, you’re mostly done with the hard stuff. 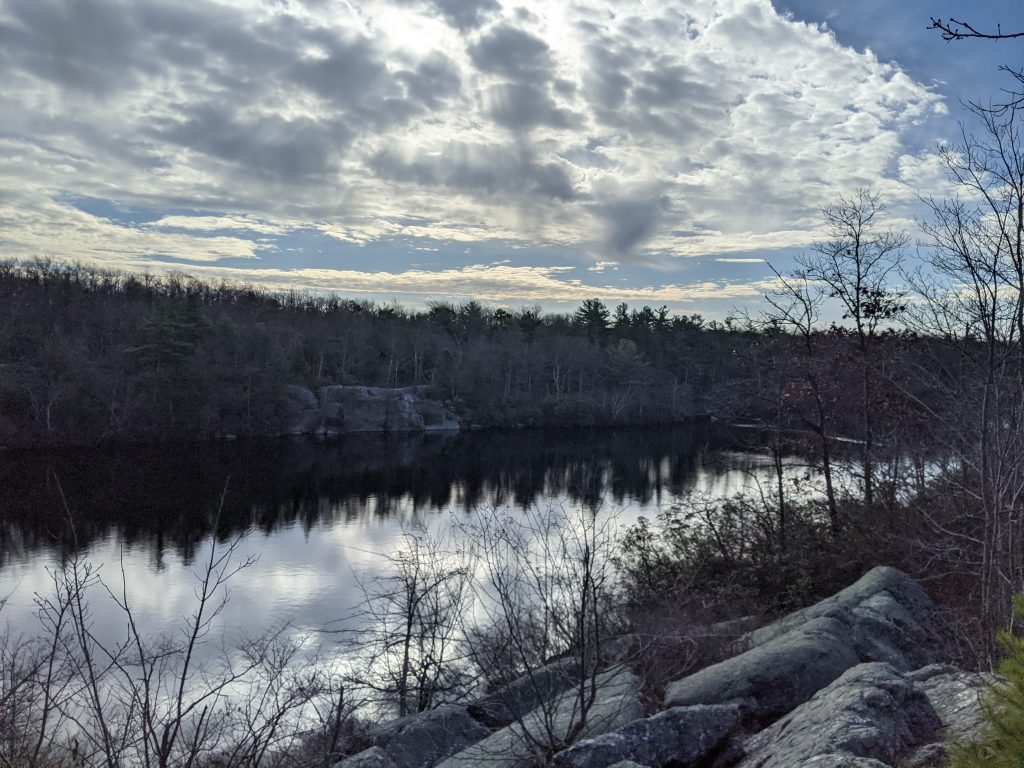 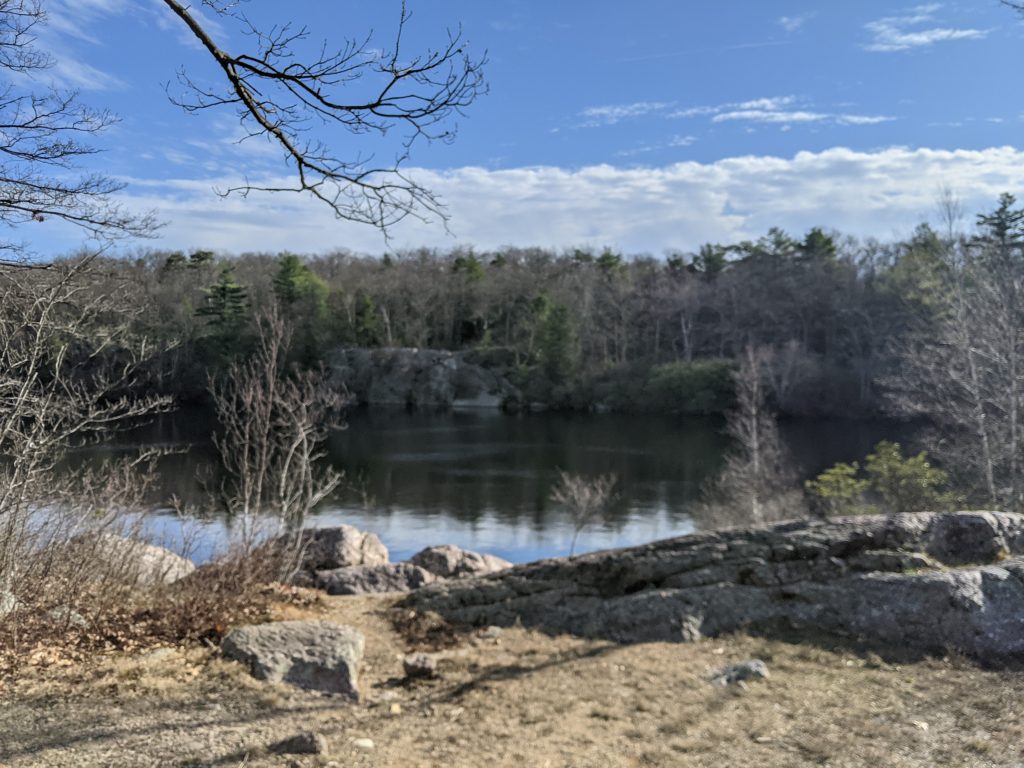 After leaving the pond, and going over some rocks, I came to this smallish cave.  You can see that it goes back a bit, and there’s water; but I wasn’t willing to find out who might be napping in there. 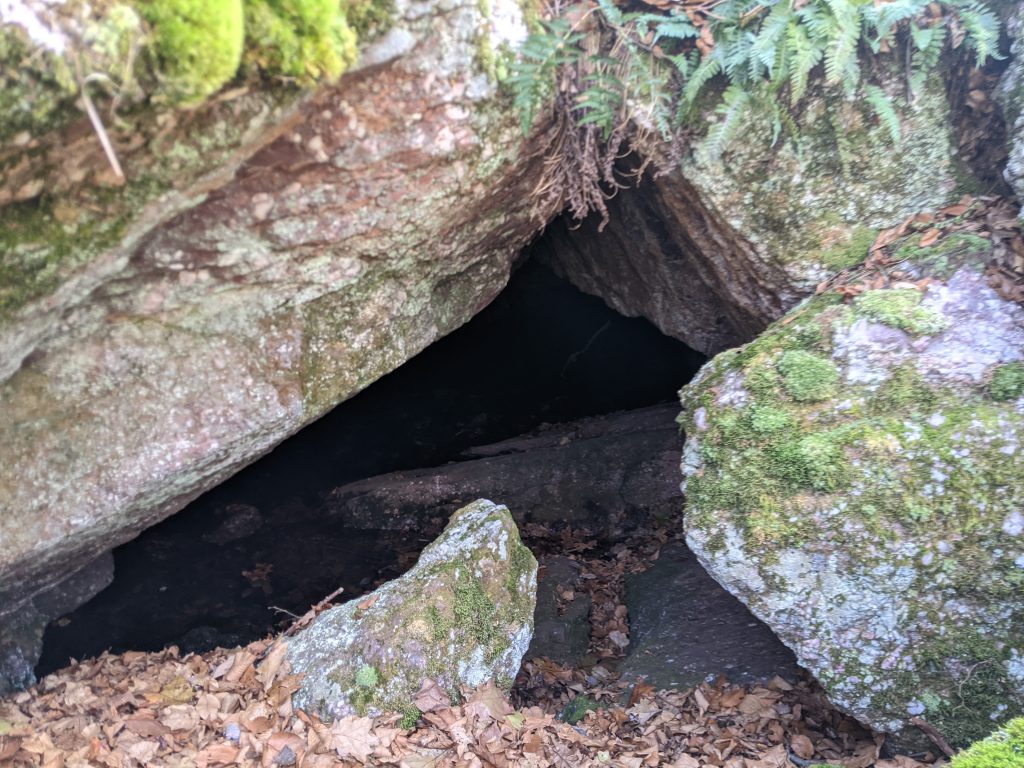 There were a couple of sections of the trail that were just perfect to walk…wide dirt trails covered in pine needles. 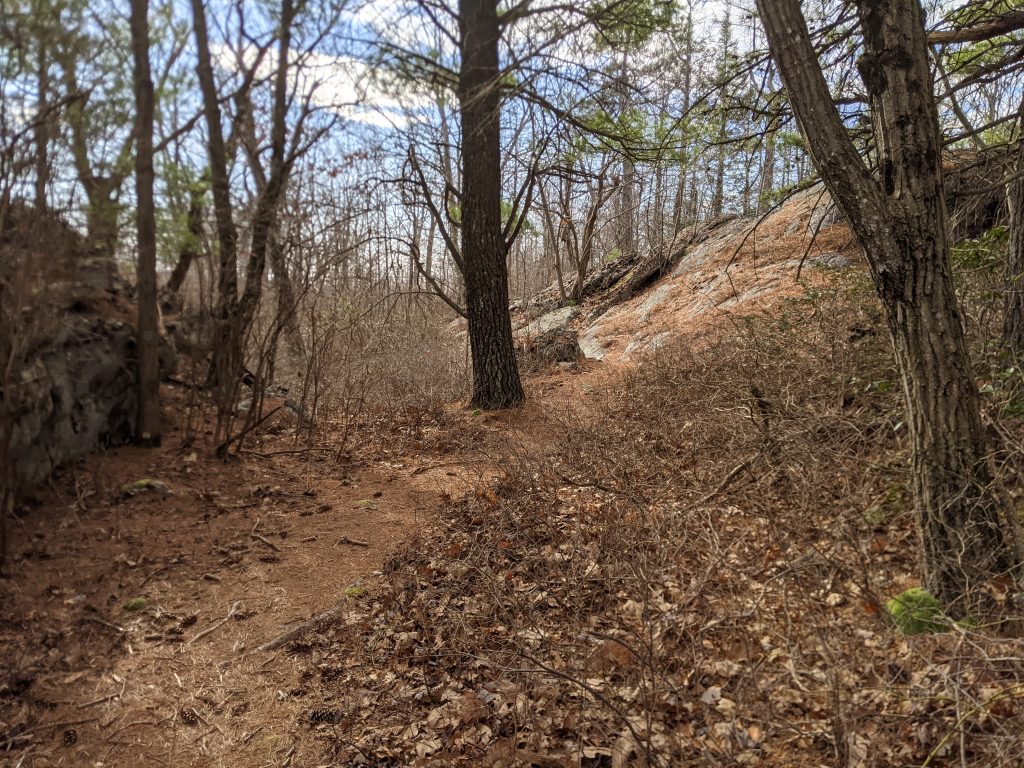 Eventually the trail will wind down to a swamp, and join a woods road.  You will go over three drainage pipes, that form small cascades across the road from the swamp. 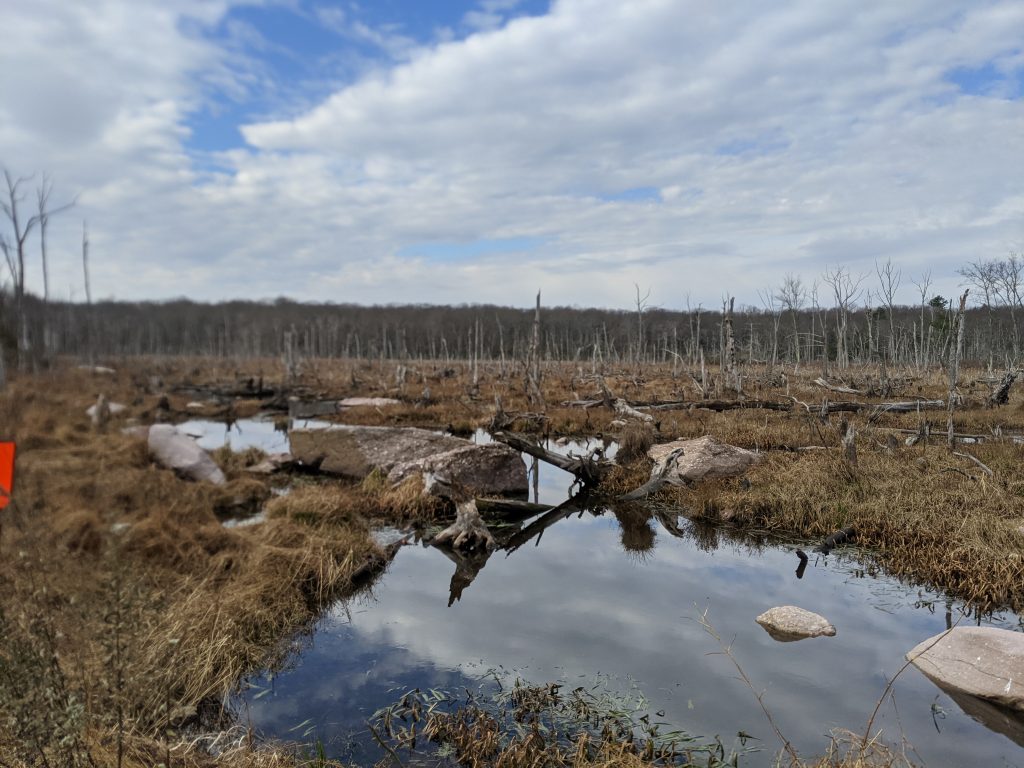 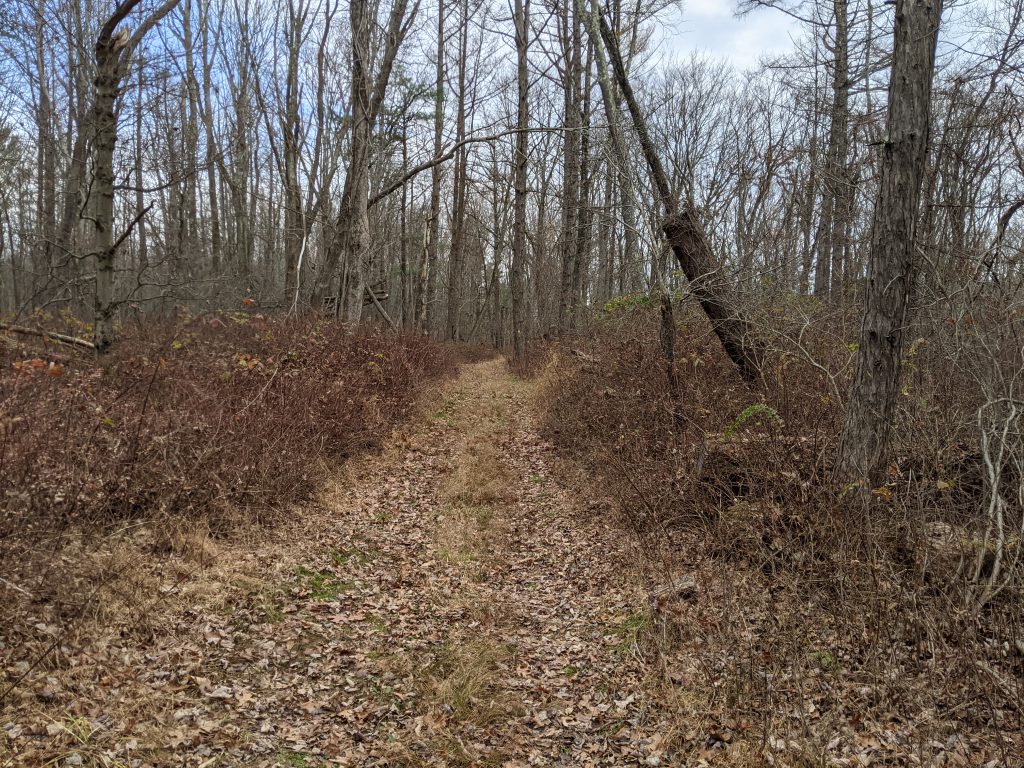 Eventually, the road will veer left, with the trail making a hard right, and becoming more of a trail than a road.  You will follow this back to the trailhead.

Just before descending to the trailhead there is a good-sized Rhododendron tunnel to pass through. 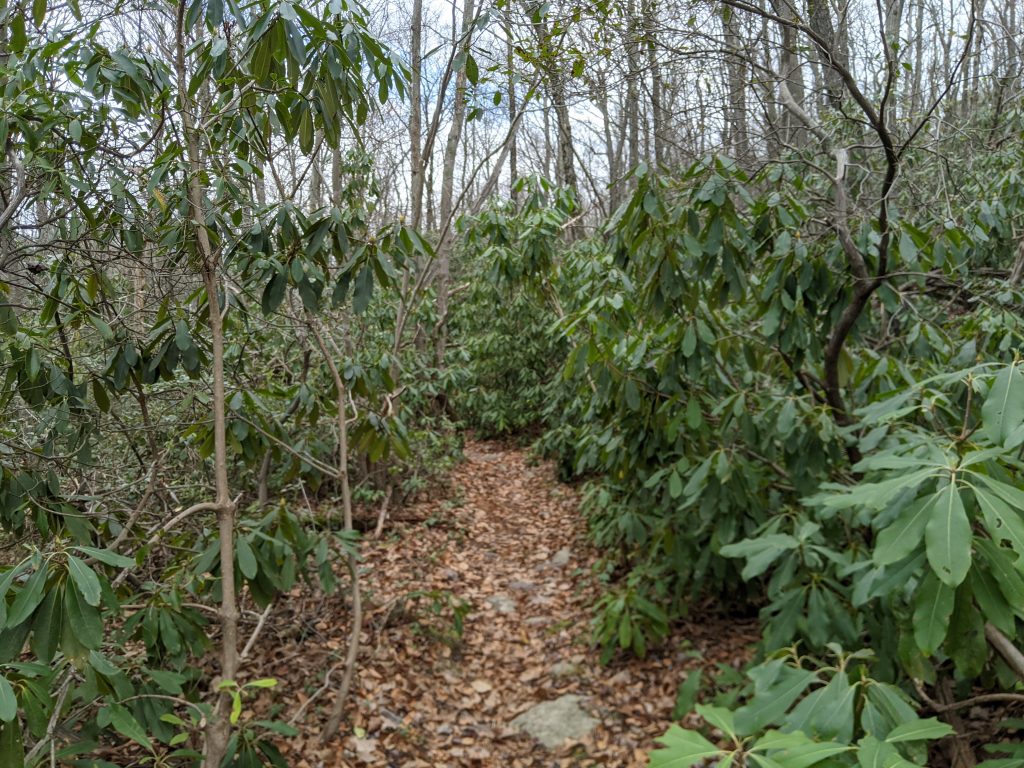 This is another great hike.  I may attempt the northern loop in the future as a new trail has been cut to form a true loop.  I can imagine this hike would be much more crowded in the summer and nicer weather.  Because of the popularity of the pond, I did come across more people, but not the insane crowds on some of my previous hikes. 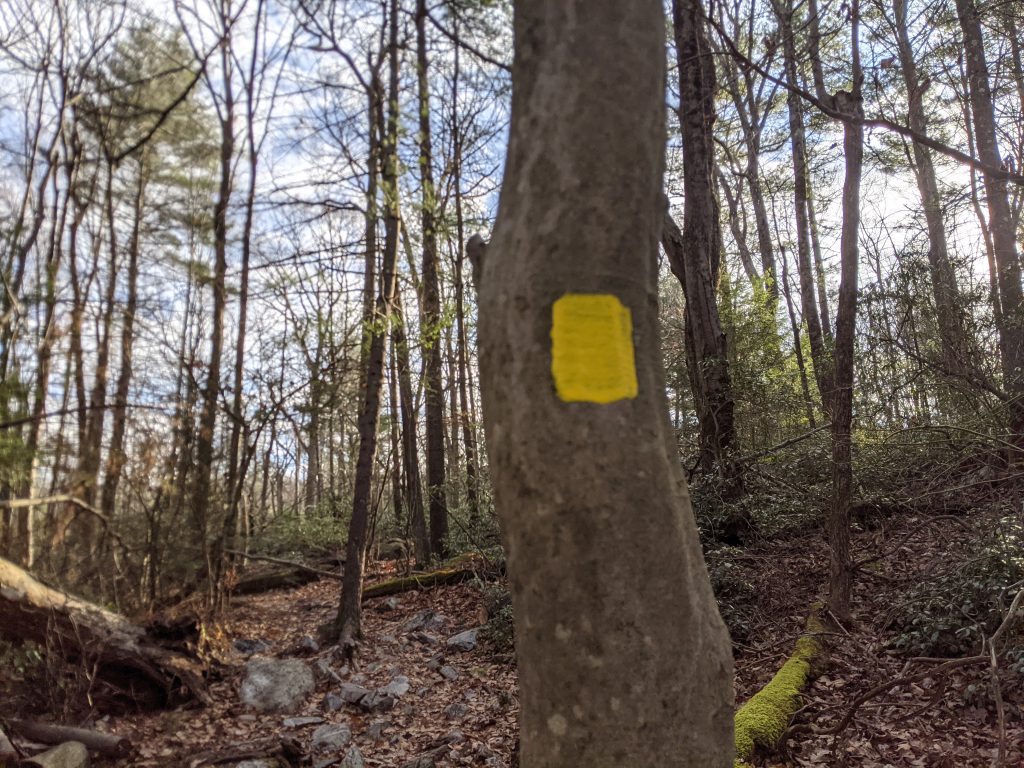 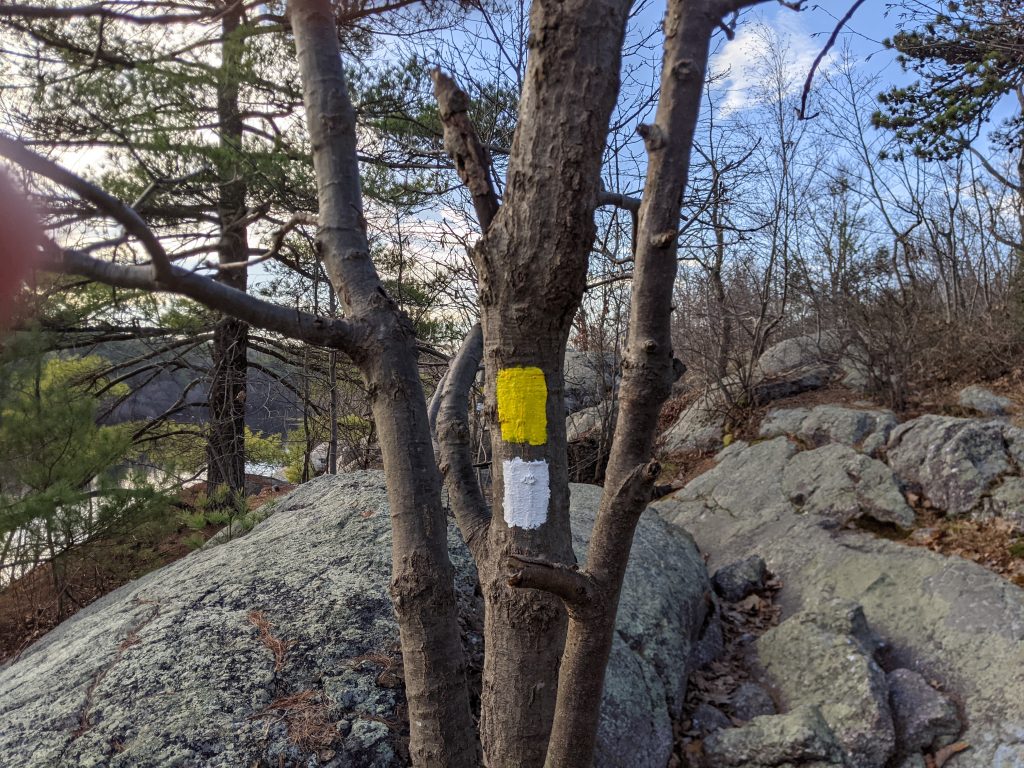