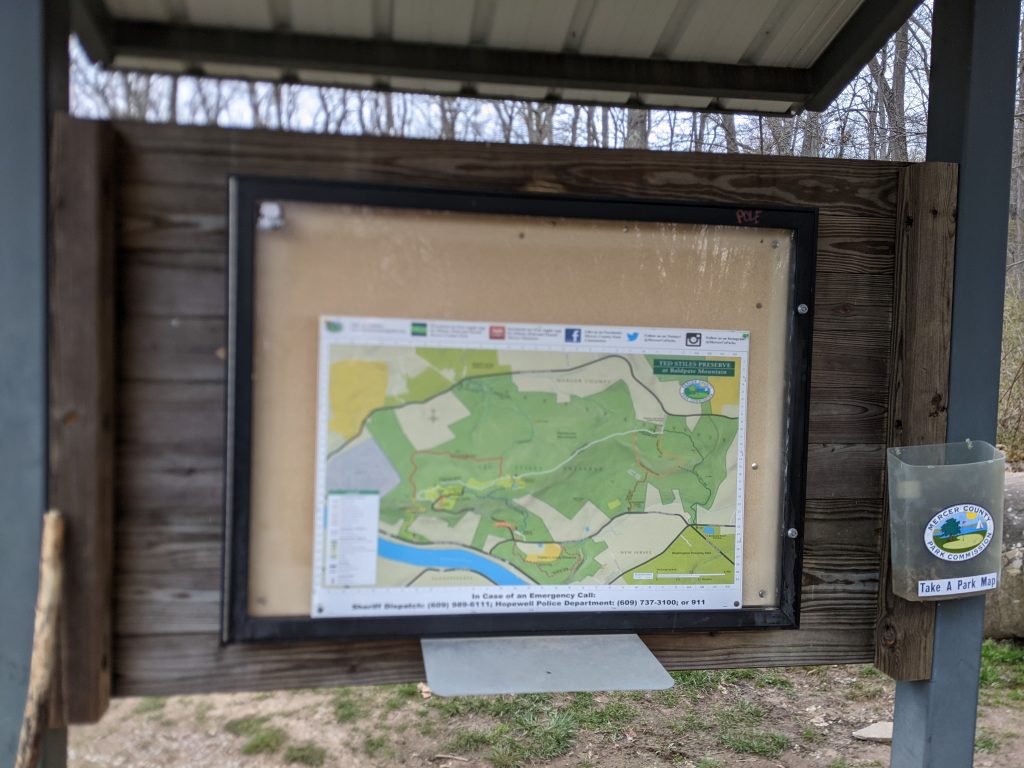 After two weeks of cold and rain, it was time to get out on the trails.  Leaving my house it was cloudy and about 45.  The sun would come out as I crested Baldpate mountain and the temperature would warm up to about 60 making for some perfect hiking weather.

This hike was the perfect warm-up, even though I I did a good stretch of the Delaware and Raritan Canal two weeks ago.  Baldpate Mountain, at Ted Stiles Preserve, has some minor elevation, very minor scrambling, but mostly flat dirt trails.  Be warned, though, the northern east-west section of the NW Loop had sections with very deep mud.  I also encountered mud on the Kuser  and Cooper Hill trail where very small streams flow down the middle of the trail.  Trails can be used by bicycles (I saw none) and horses (I saw one.)

Right off the bat I saw what appears to grow all over Mercer County, garlic mustard. 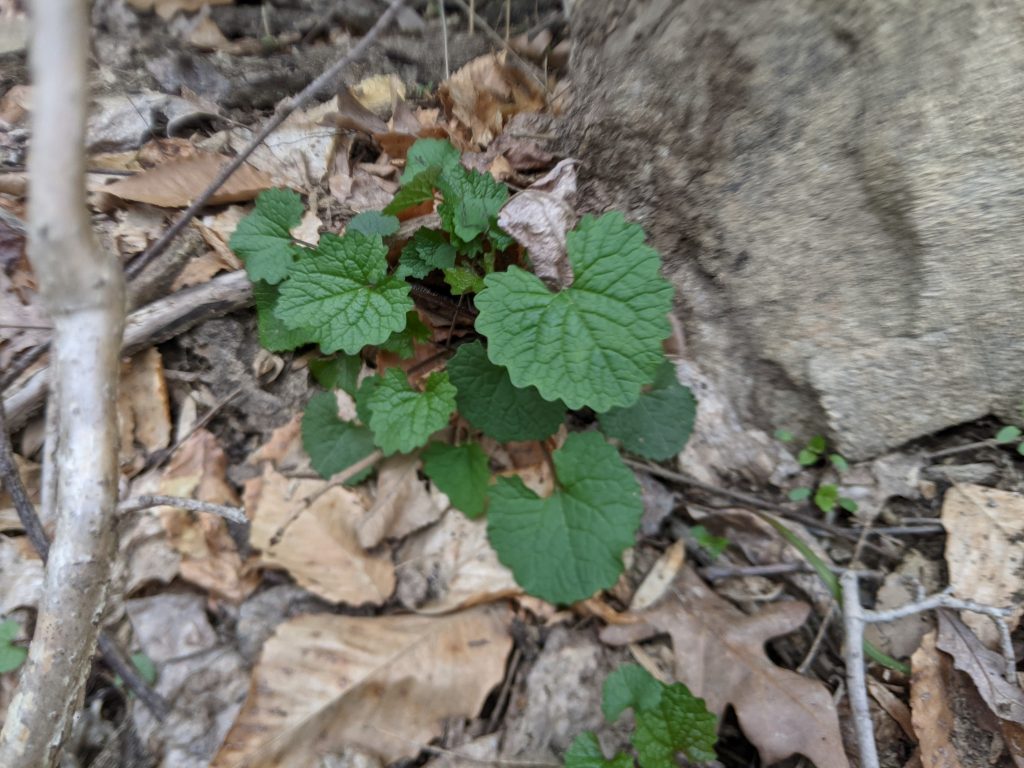 On both sides of the trail, all over the park is plenty of Multiflora Rose, an invasive species.  And this is all over. 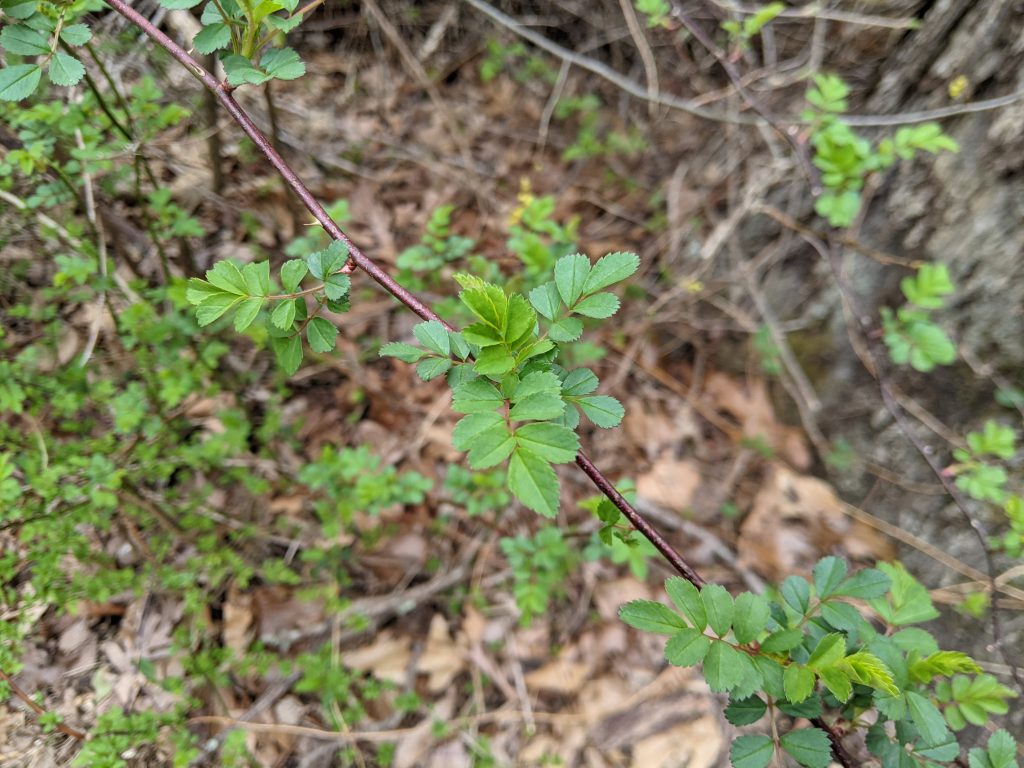 A little further, I found some fungi in the rose bush, Little Nest Polypore.

And when the sun peeked out from behind the clouds for an instant, I saw:

All this was found on the beginning of the Summit Trail.  I hadn’t gone far.  The trail winds up Strawberry Hill, and there are a couple of good scrambles. 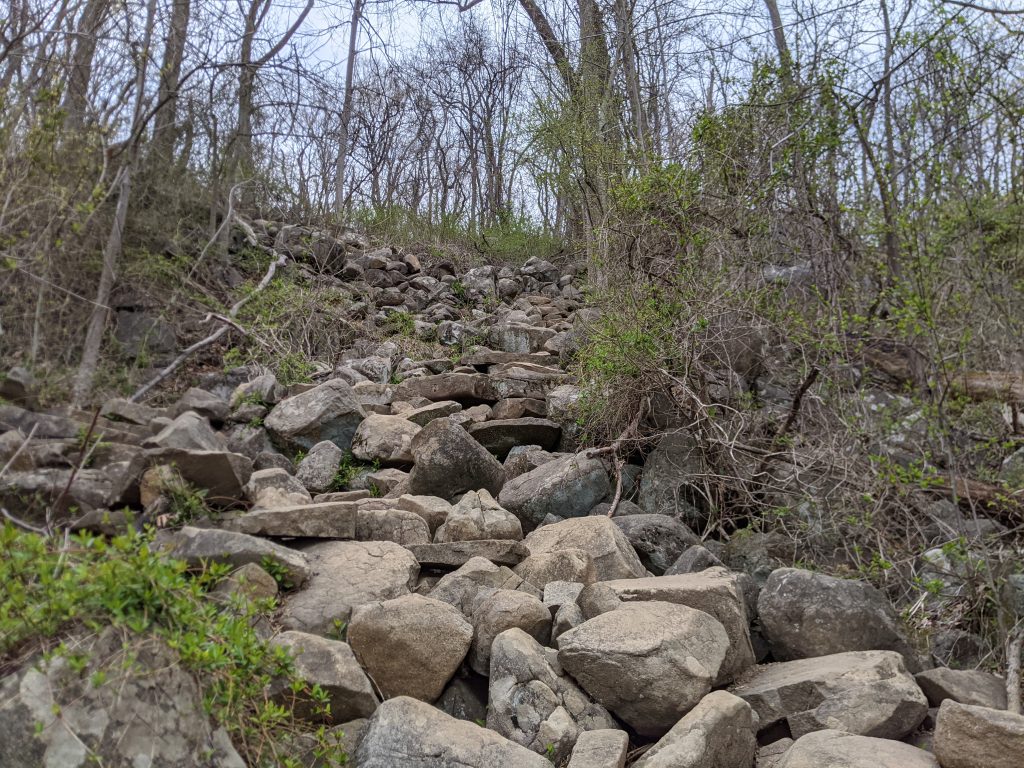 Before reaching the Strawberry Hill Lodge, there was more to see.

Once at the top I explored the grounds of the Strawberry Hill Lodge – which looks like a great reception center on expansive grounds and a view of the Delaware River (though maybe not with leaves on the trees.) 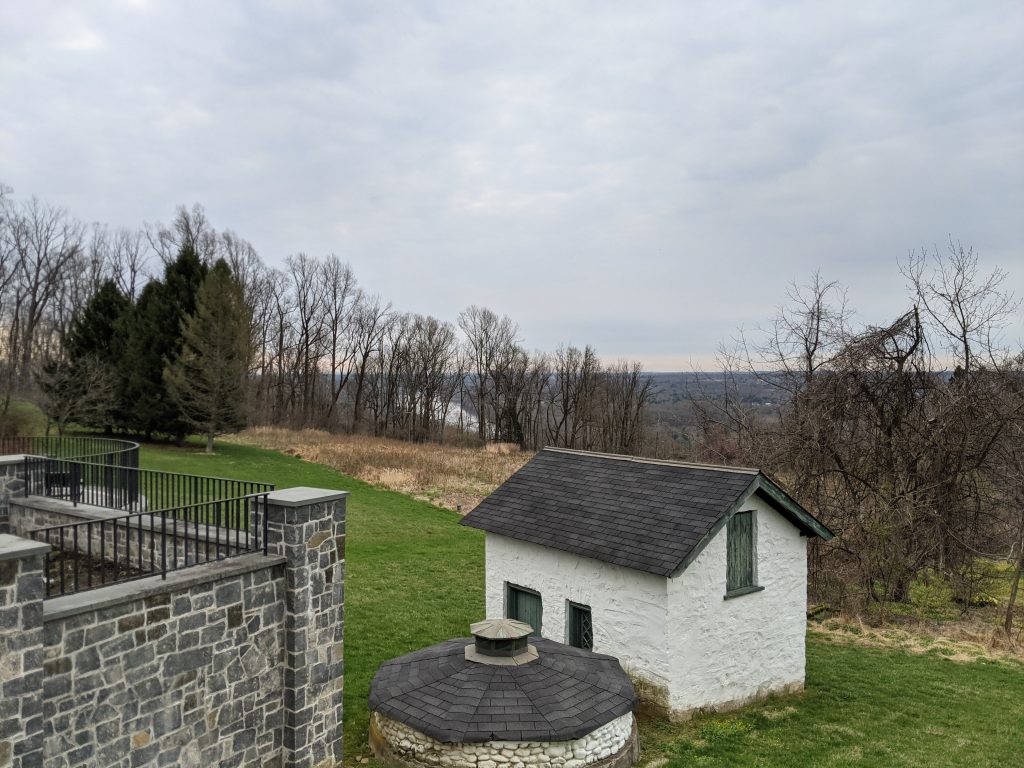 Heading to the NW Loop, I stumbled across a patch of Virginia Bluebells.

I had to bushwack around some serious mud while on the NW Loop.  And, it climbs steeply to get back to the Ridge Trail.  The Ridge Trail is mostly flat, somewhat-wide packed dirt. 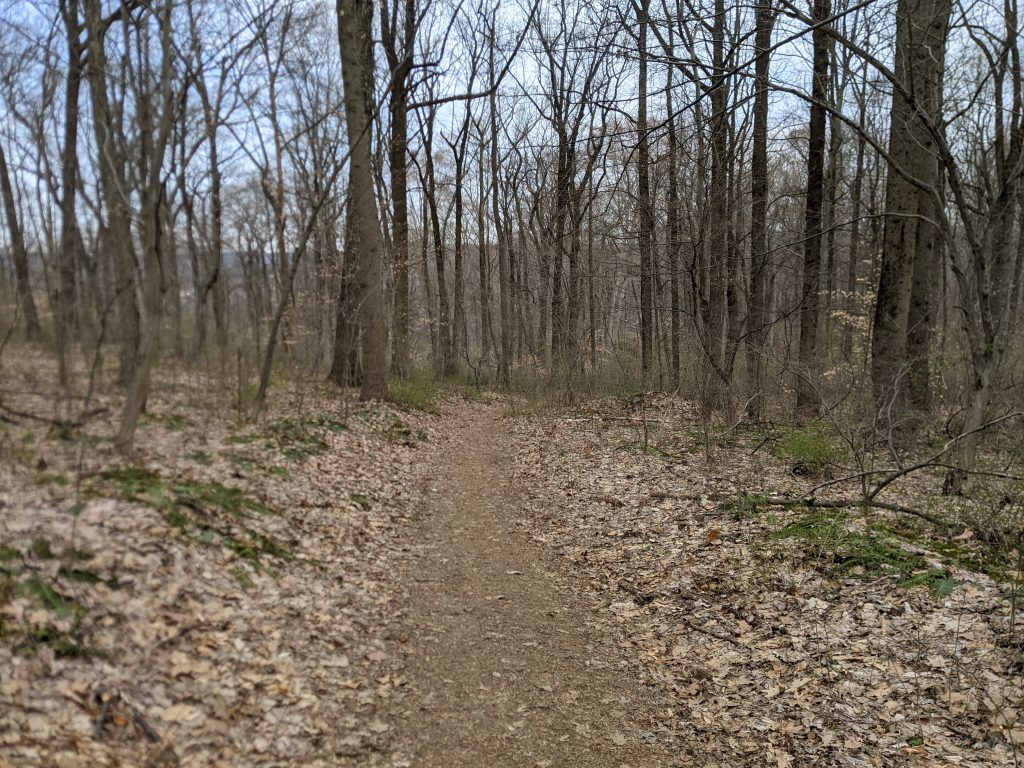 Every so often I ran into unblazed trails with an ominous sign. 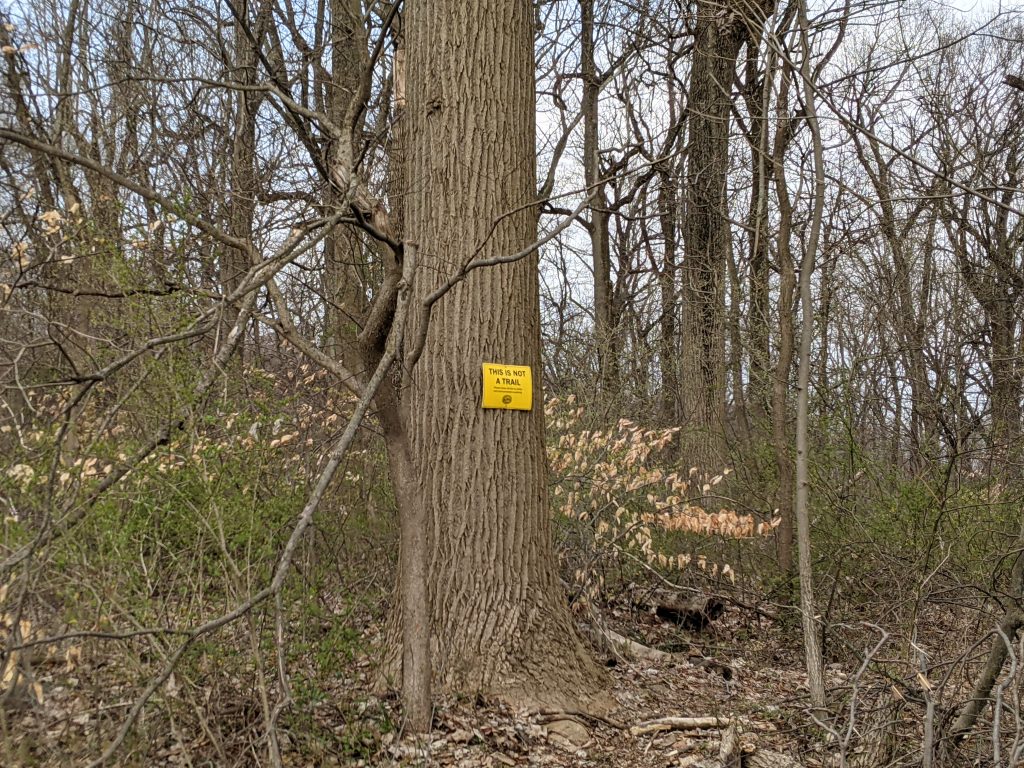 Where the Summit Trail junctions with the Ridge Trail are a couple of old farm buildings, part of the Welling/Burd Farmstead.  On the way back, I would turn here to visit the pond. 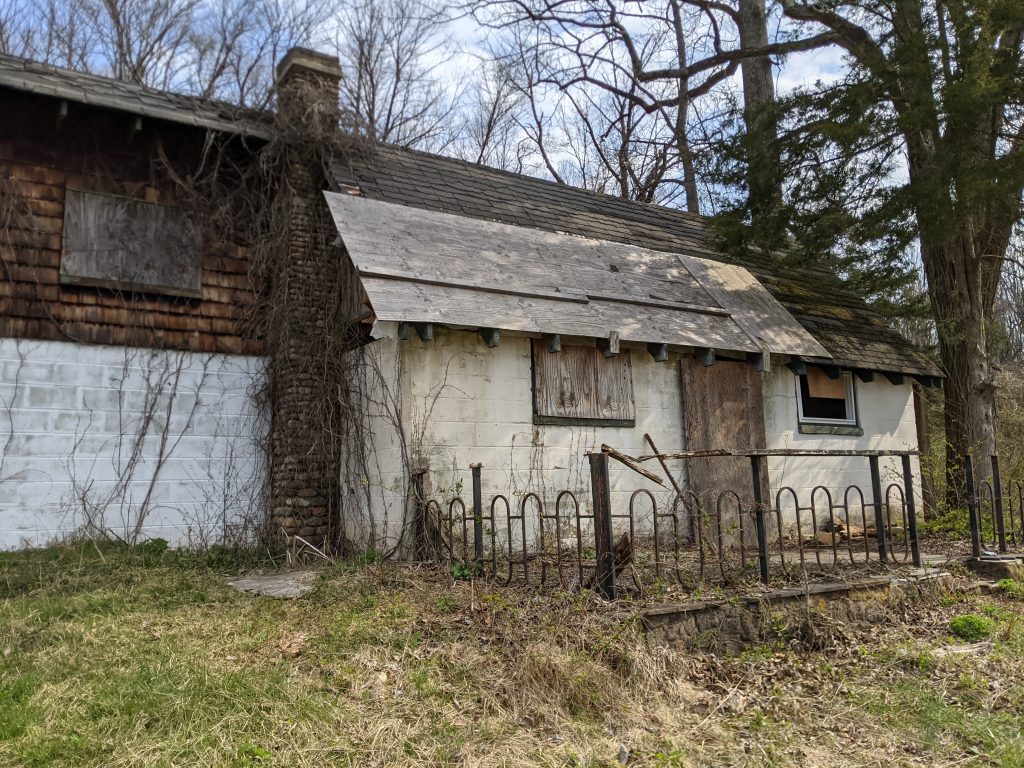 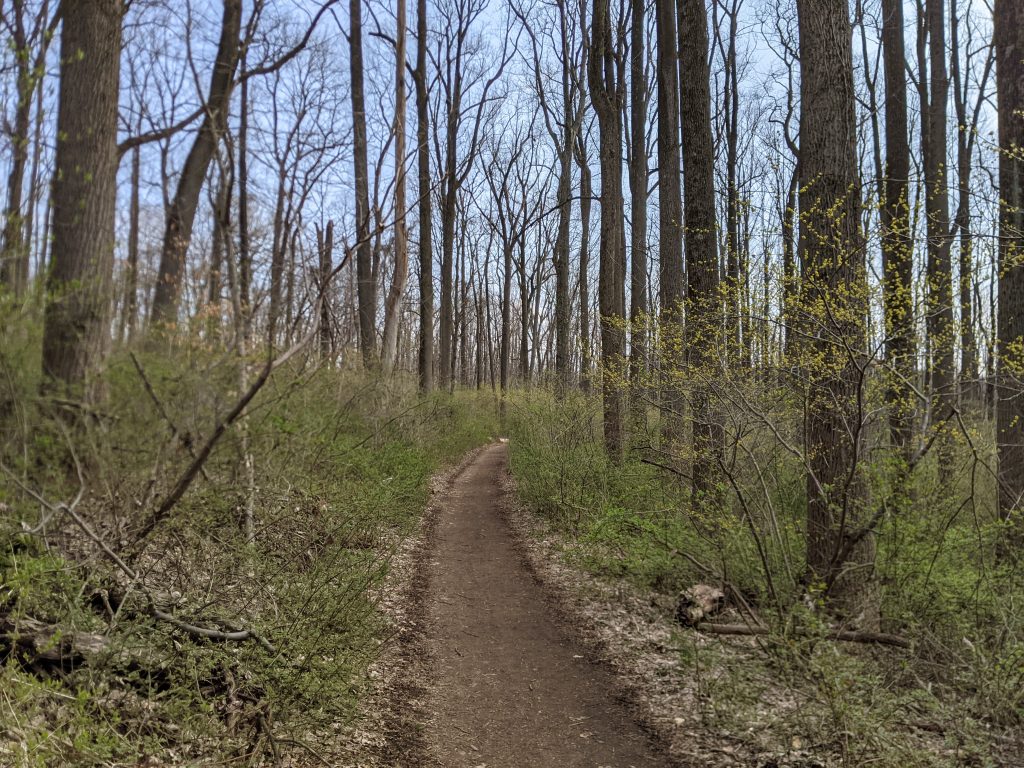 Just before cresting Baldpate Mountain, I came across an area with many trees cut down.  I have no idea for the reason, and some of the trees looked really tall. 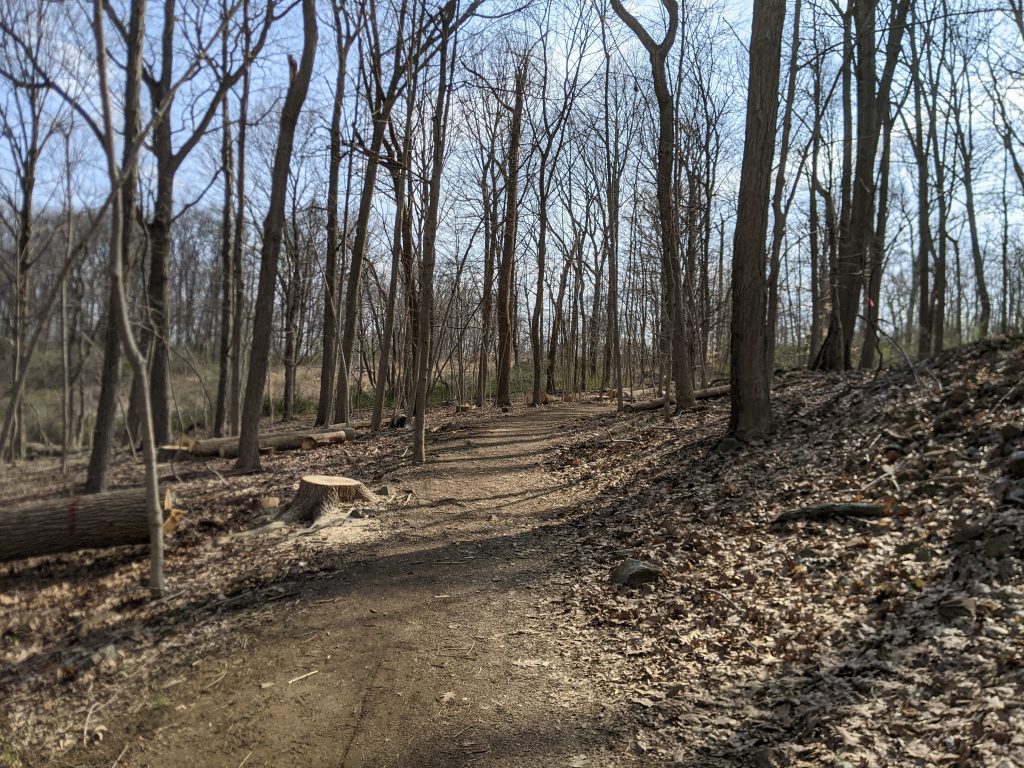 Right after this I was passed by a rider on a horse.

The Ridge Trail ends at a parking lot, and when I got there the sun was out, and there were two horse trailers parked.  A power cut runs through the parking lot, I took the Kuser trail which followed the cut for a short while. 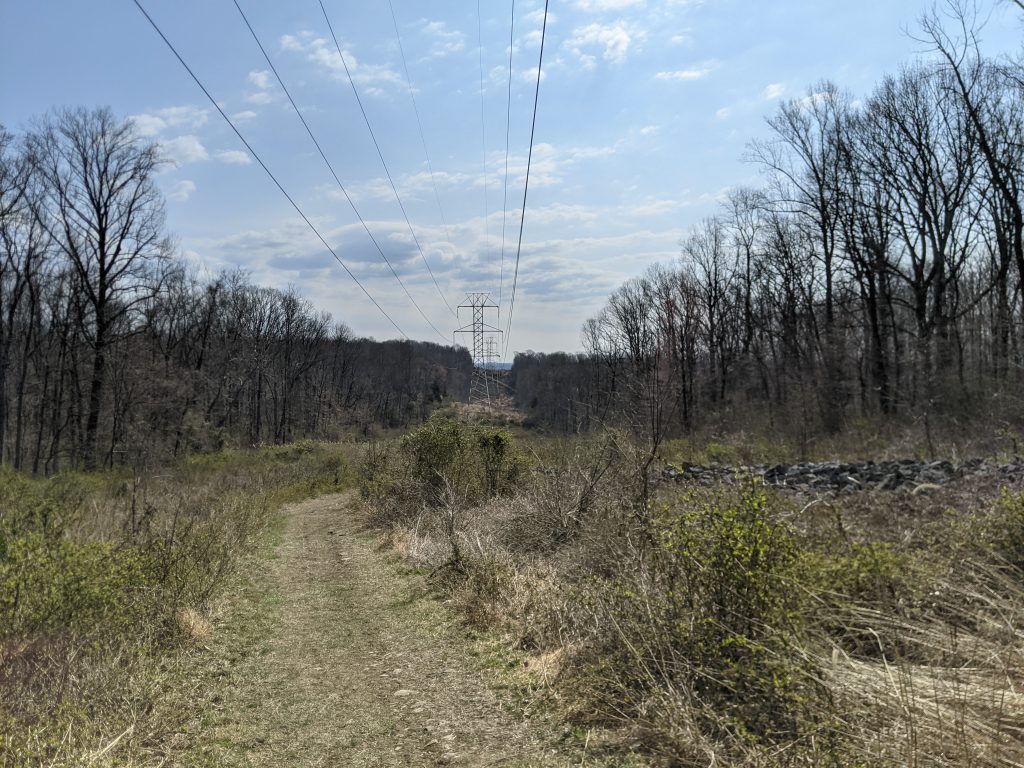 The Cooper Hill trail climbs up to junction with the Ridge Trail (in order to make my way back.)  Along the way I came across the ruins of an old house. 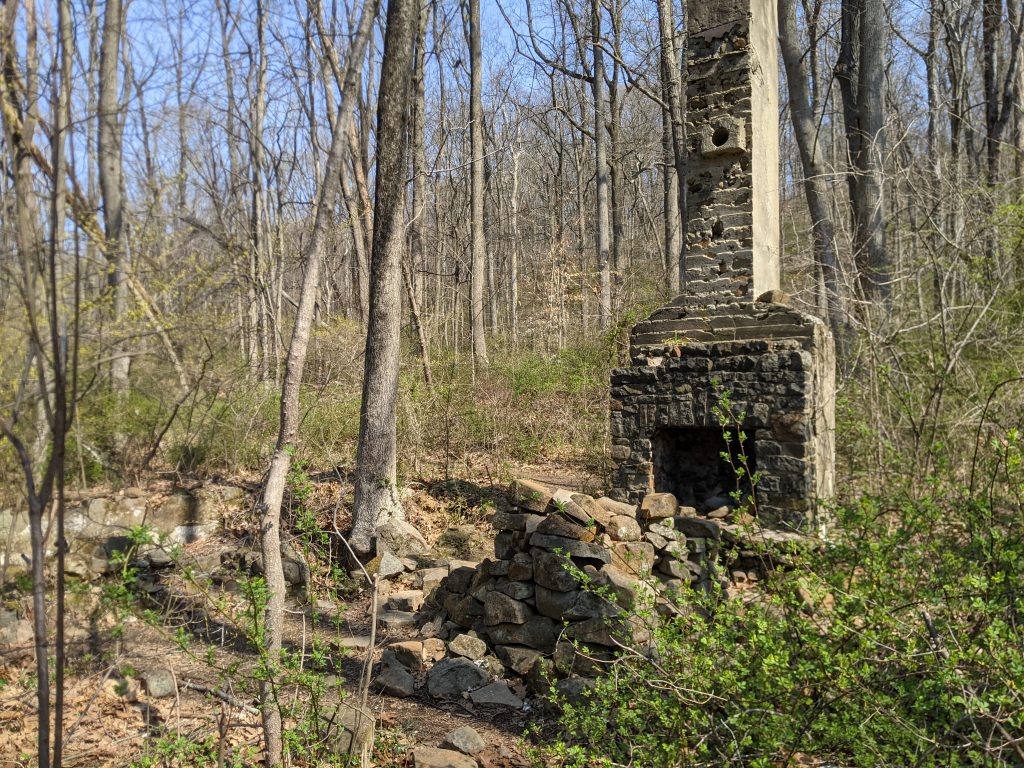 I took the Ridge Trail all the way back to the farm buildings and turned left on the Summit trail headed towards a pond.  Behind a building on the pond is a secluded concrete slab which made the perfect place for lunch.  People passed by on the Summit Trail, and probably had no idea I was there.   The fish were picking the insects off the water’s surface, and frogs were croaking – the perfect spot for lunch. 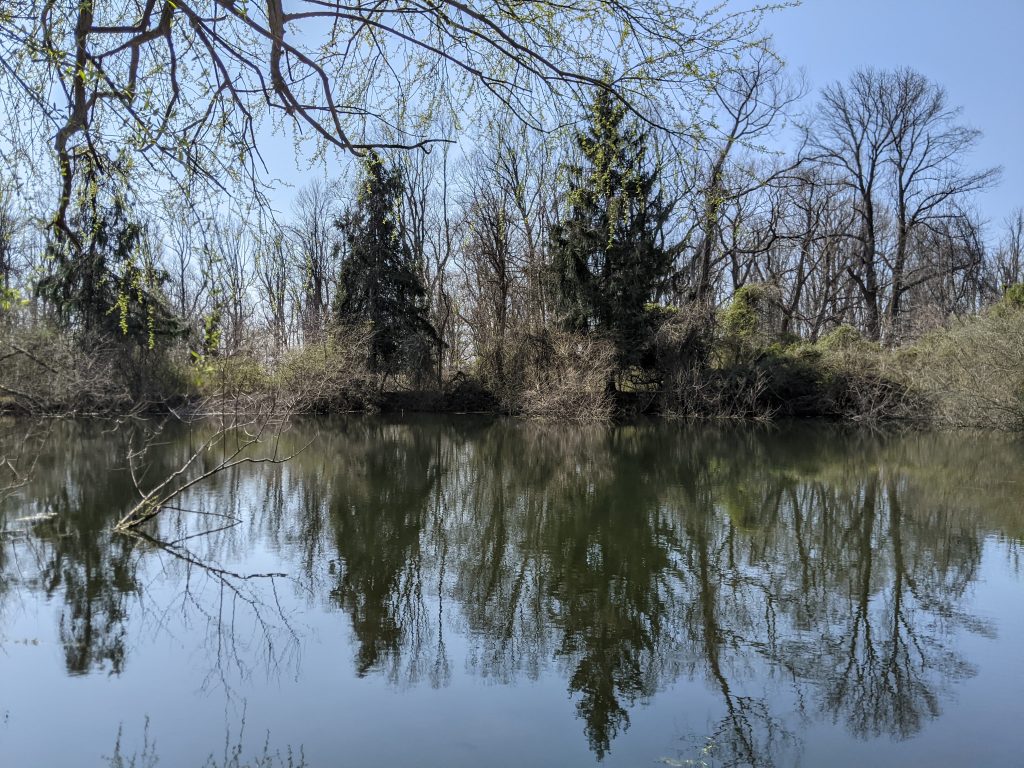 After lunch it was a quick jaunt down the Summit Trail back to the car.

This is a great place to hike, there are enough trails to make loops of any mileage.  Do note that there are some muddy spots.  And while there are some ascents and descents, it’s nothing too strenuous.  The trails are a pleasure to walk on, and there is ample signage.  I got there by about 8:30 in the morning and was the fourth car in the lot.  When I returned, the lot was full. 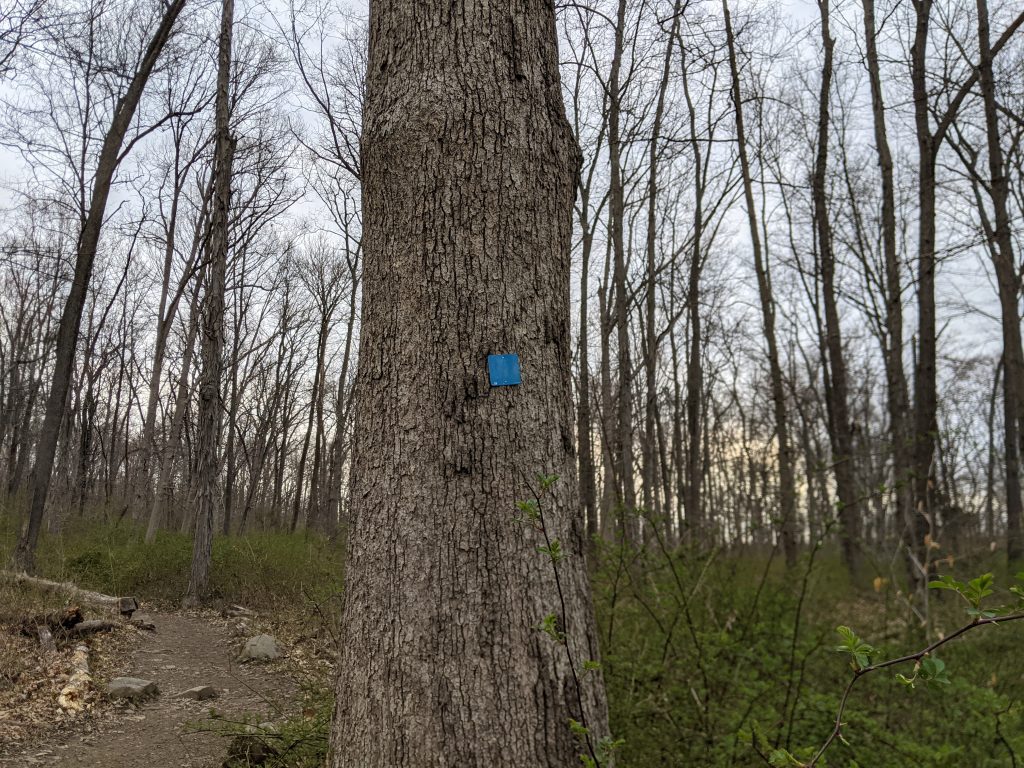 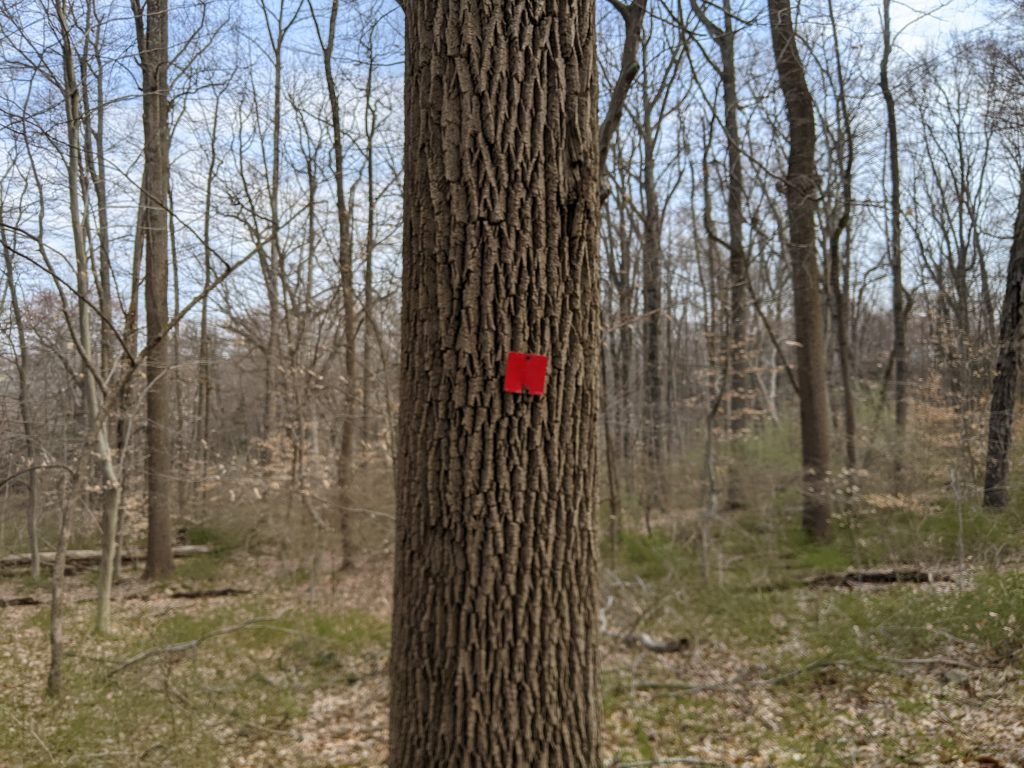 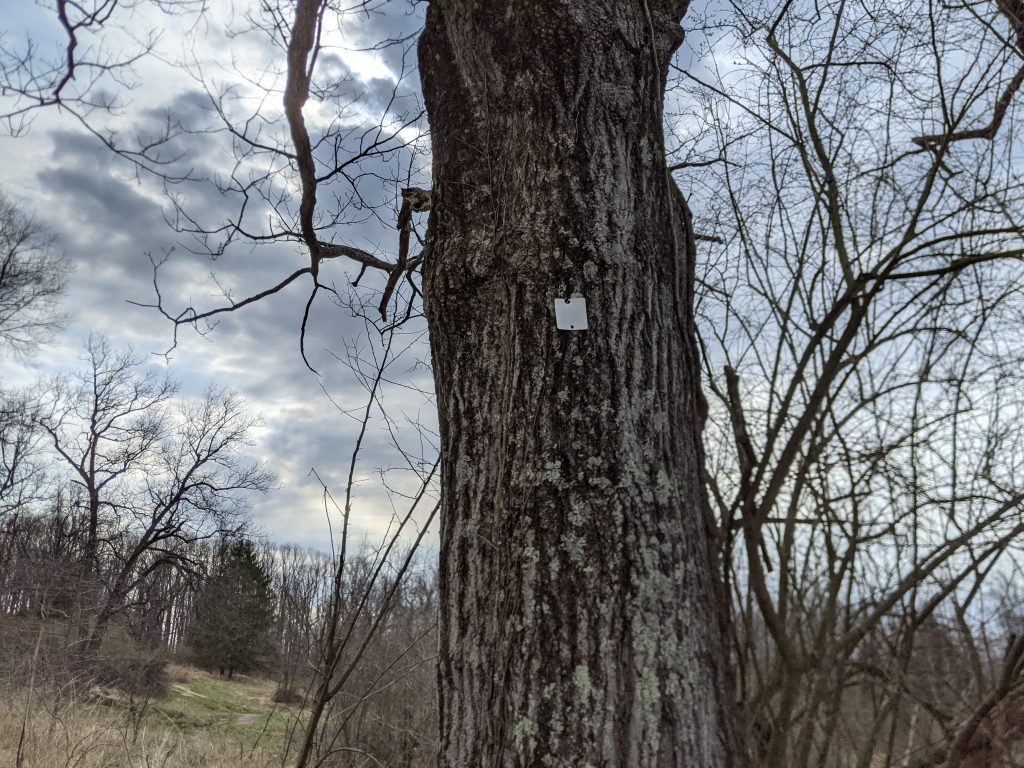 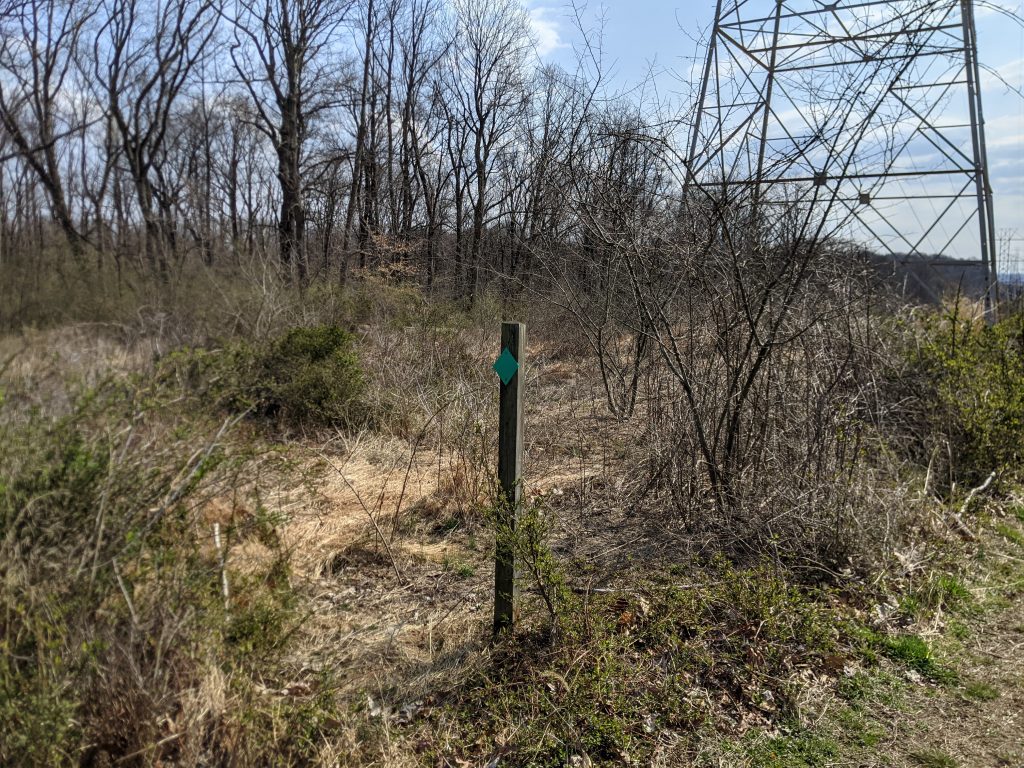 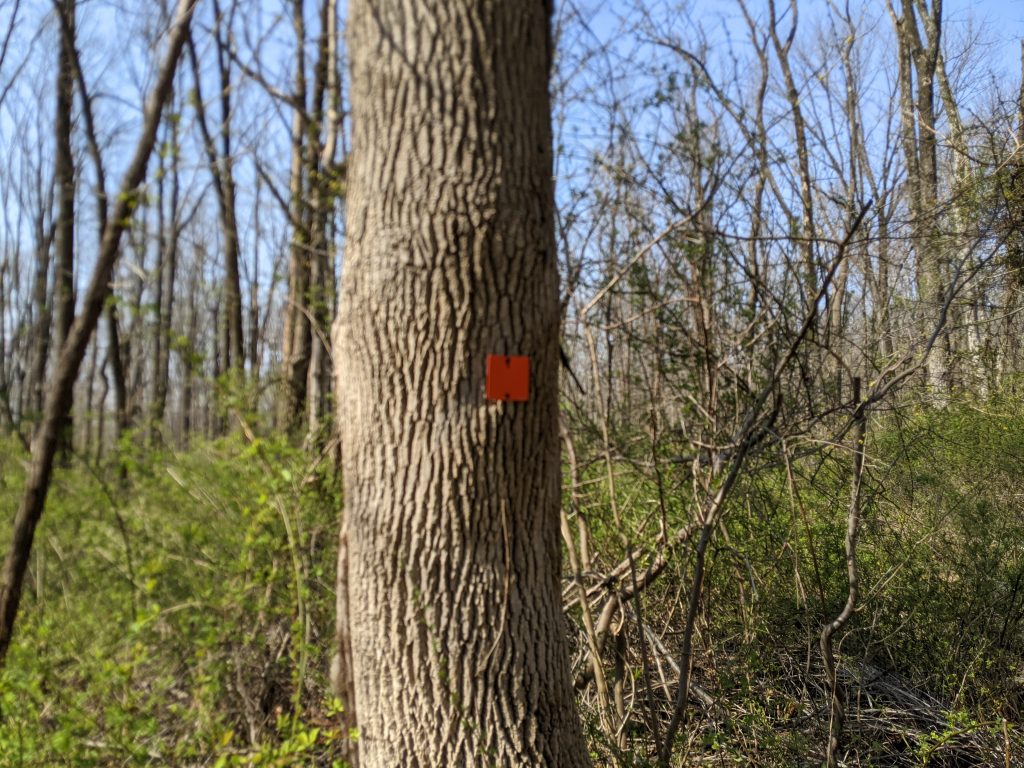