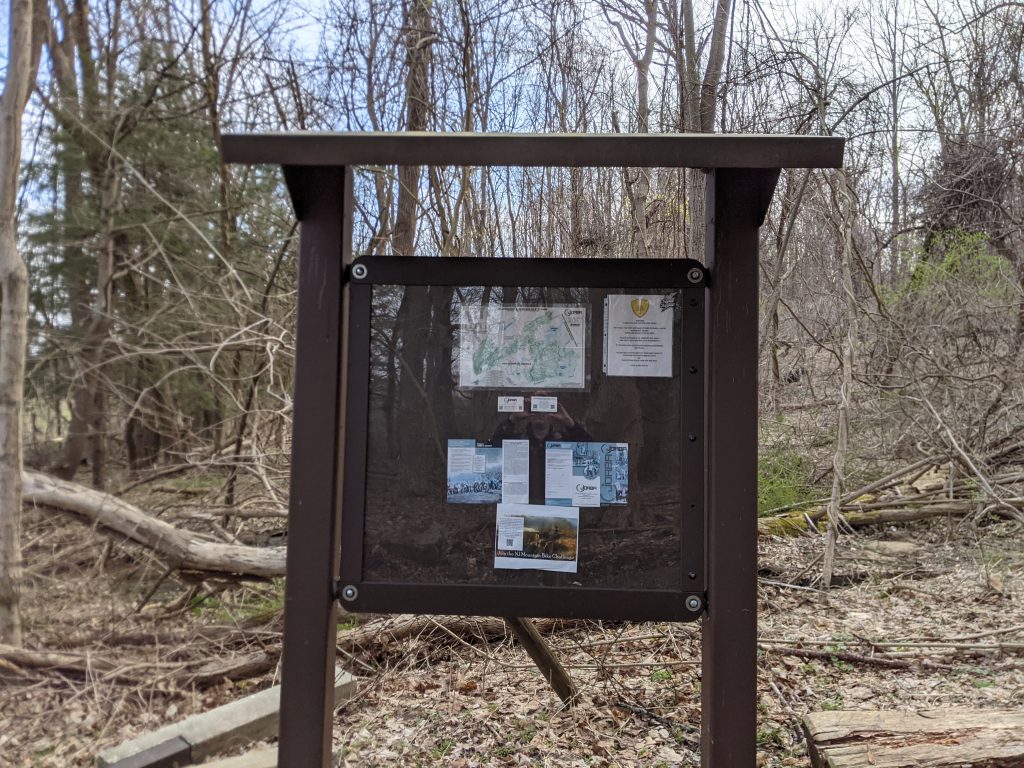 Trails:  White, Dan Beard, Ditch/Cardiac (and possibly others that I didn’t realize) 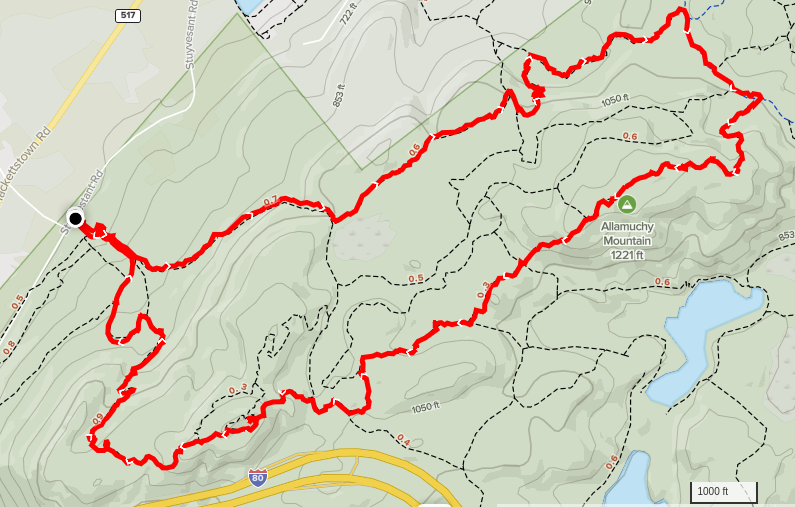 My goal for this hike was to summit both Allumuchy Mountain and North Allumuchy Mountain.  I didn’t have a real plan for that, because I didn’t have a map that showed the definitive location, or a specific trail for reaching the summits.  AllTrails showed an approximate location.  Caltopo showed the mountains, but not trail names or colors.  My plan changed multiple times on-trail; which I fully admit is not the smartest way to plan and manage a hike.

In doing the research ahead of time, I frequently read that there are many trails in the park, many not blazed or listed on the maps; and that bikes were frequent here (I saw four the whole day.)  I will reiterate what I’ve read:  hike here with a good map.  More than once I ended up on a bike trail that was not where I wanted to be.  Also, the Allumuchy Scout camp is located within the park, and you are not supposed to enter.

I parked just off Route 517 on Stuyvesant Road which is a rutted dirt road with large potholes.  I was the third car there, and there were easily 10+ cars when I left, with more coming.  I saw no other hikers the whole day, there was plenty of solitude.  I saw four bikes, two separately, then a group of two went by while I was eating lunch.  At the southern end of my hike I could hear the cars on Route 80, so there is some road noise – but I only heard it near that southern section.

Right off the bat there was a great patch of Perriwinkles. 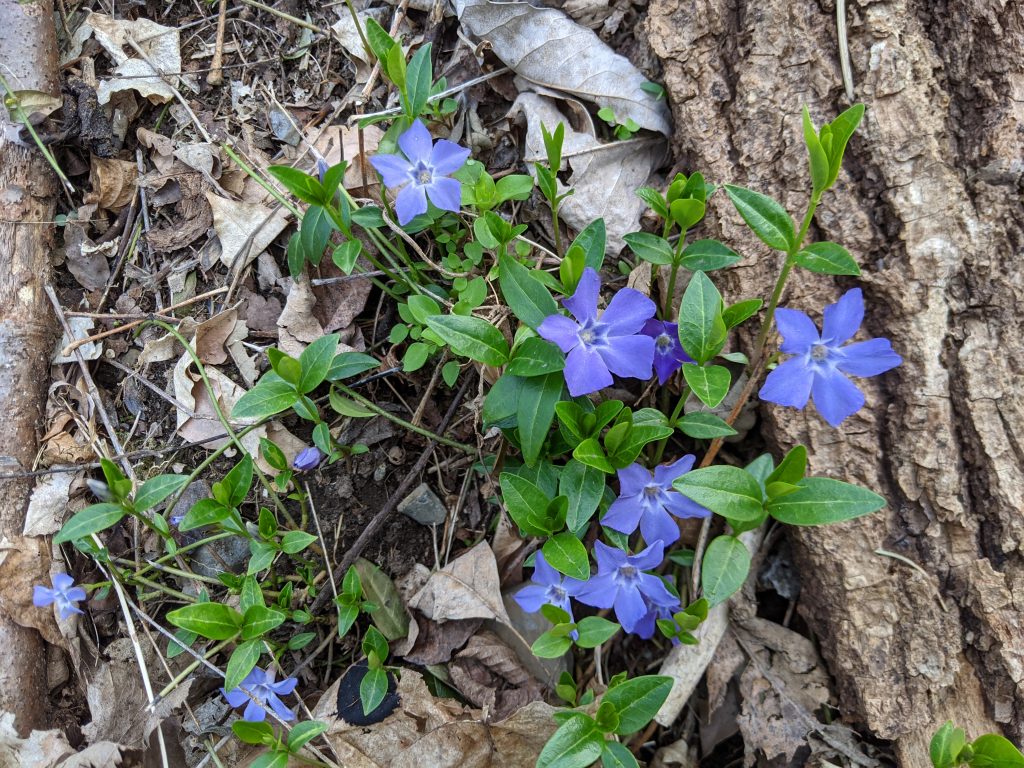 I started off on White, and for the most part the trail itself was relatively wide and composed of soft dirt.  I was surprised in that the trails were not non-stop rocks like so much of north Jersey.  In many portions of the White trail there are switchbacks on the slopes, many rutted out from mountain bikes.  There are numerous unblazed and un-named trails that junction with white.  The main park trail junctions are fairly well-marked with trail names and permitted uses. 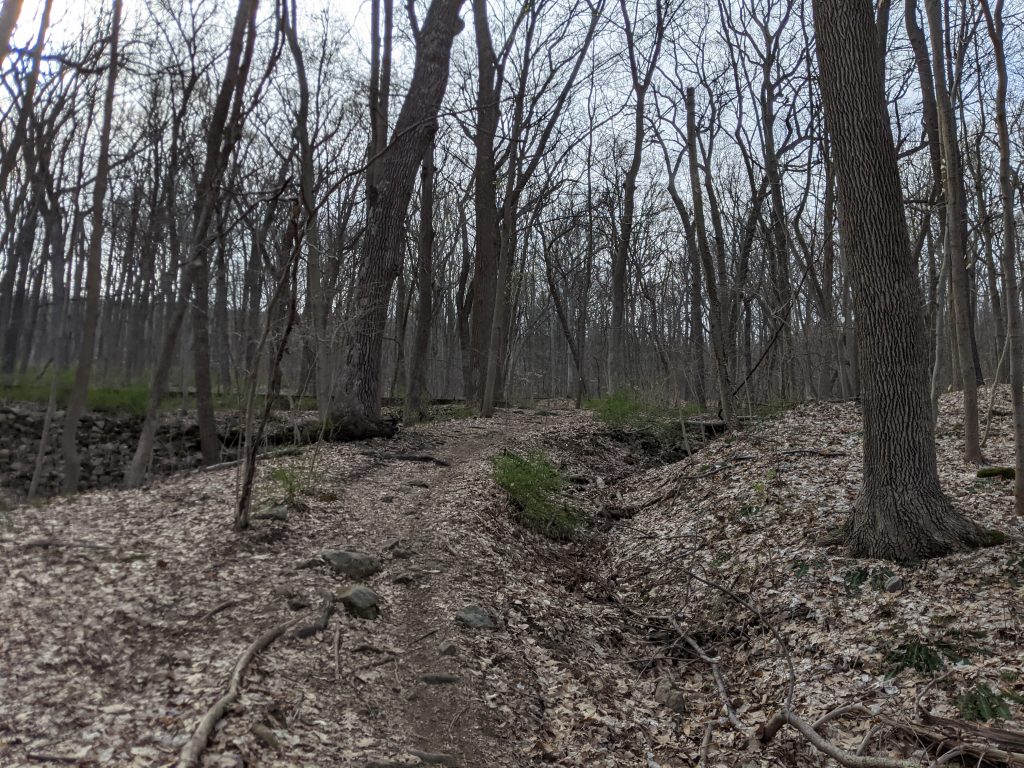 After a little while on White, I came across a small ruin; it’s not listed on any of the maps I had. 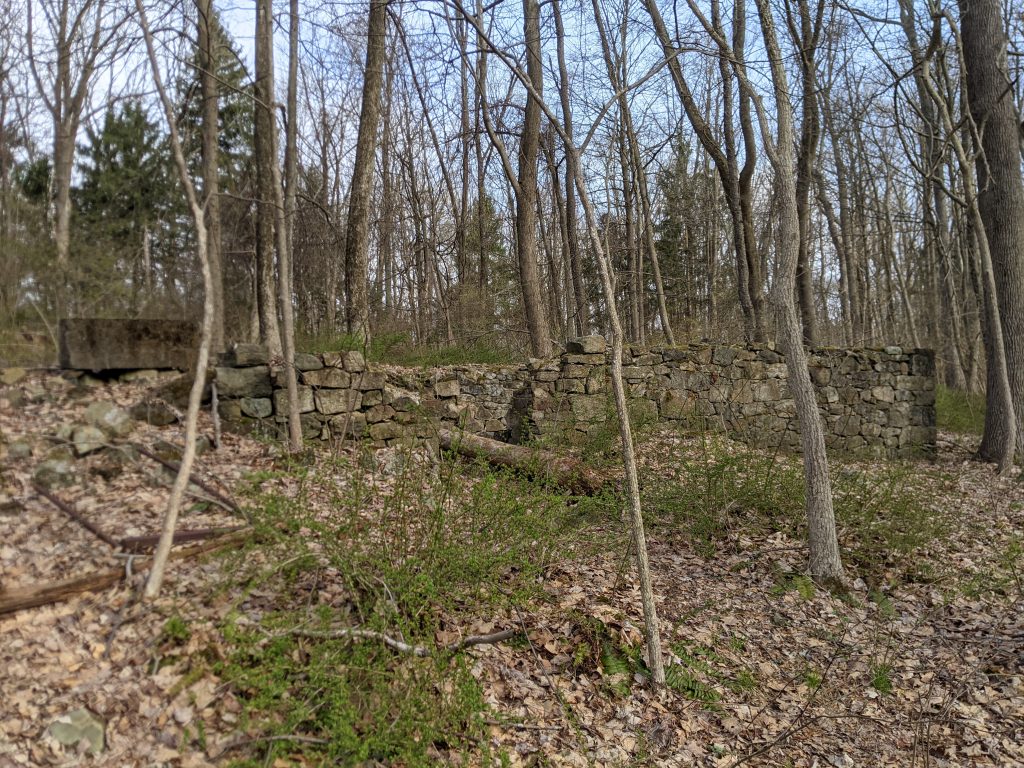 In many locations around the park I ran into trees just covered with Fomes, some white, and some dark colored.  I couldn’t really identify which versions I stumbled upon, some were pretty big.  Many of the trees looked like this: 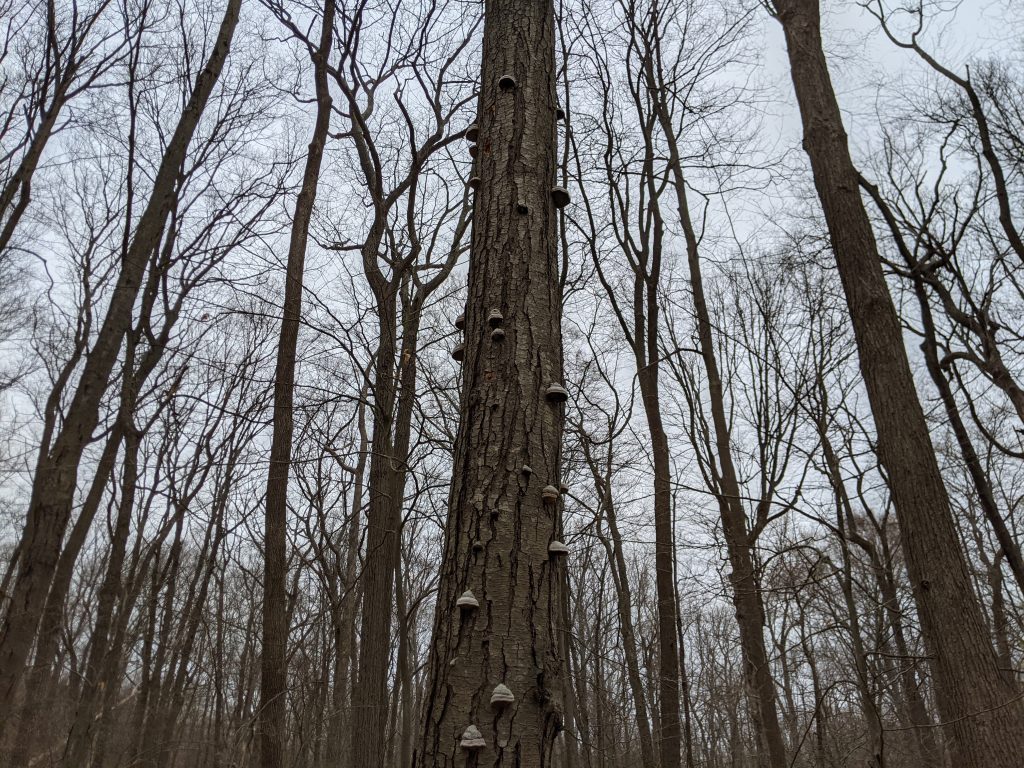 Following White, I came to a trail junction that I had heard about, but was not on the park map.  (The junction shows up in a Caltopo map and is marked in AllTrails.)  A sign called out a junction with the Dan Beard trail. 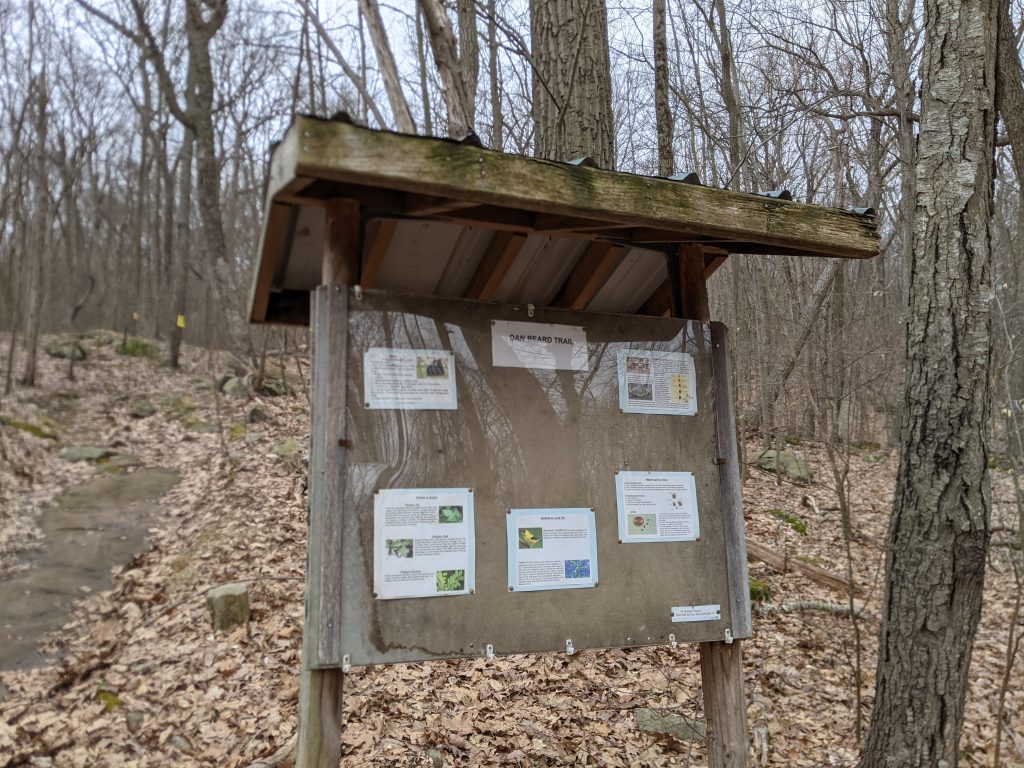 You can see to the left of the kiosk a well-defined trail (albeit of rock right there) that heads in a south westerly direction.  Looking at AllTrails, it showed that this trail would go right over the top of North Allumuchy mountain.  However, I knew I was right on the edge of the scout camp.  I called the audible, and headed off – knowing that I didn’t want to wander into the camp grounds.  And really, if this trail was off limits, there should have been a sign or barrier. 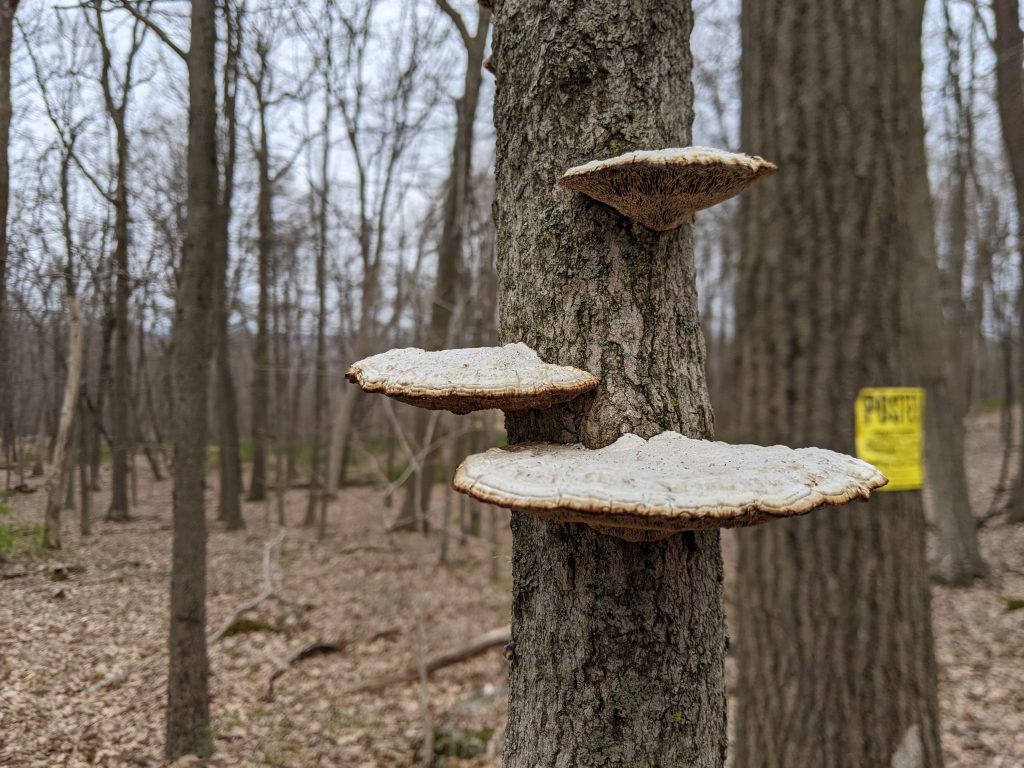 The Dan Beard trail is well defined, though lots of un-named/unblazed trails split off; and it was here I saw to bike riders.  The trail is not blazed per-se, but with the number of Posted signs (on my left) it was easy to follow the boundary of the camp.  To my right appeared to be State Park land, and to my left appeared to be the camp.  My rationale was I would be ok as long as I did not step over that invisible line that went from posted sign to posted sign.  Here’s what it looked like: 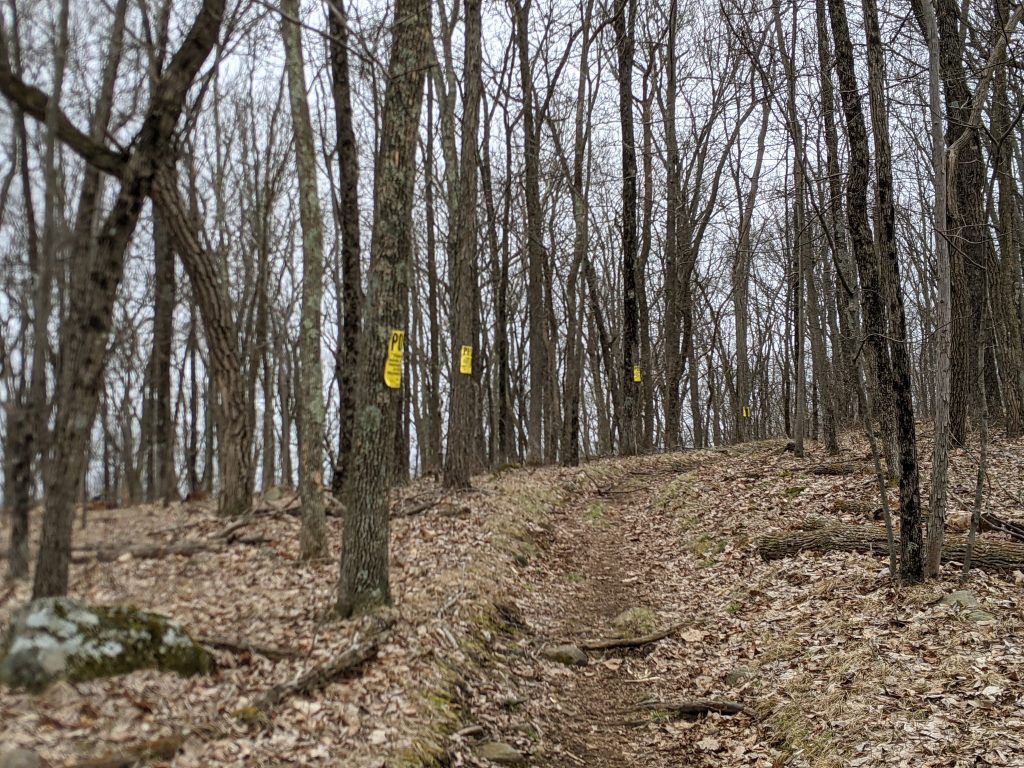 I came to a boulder with a whole patch of Daffodils right near the top of North Allumuchy Mountain. 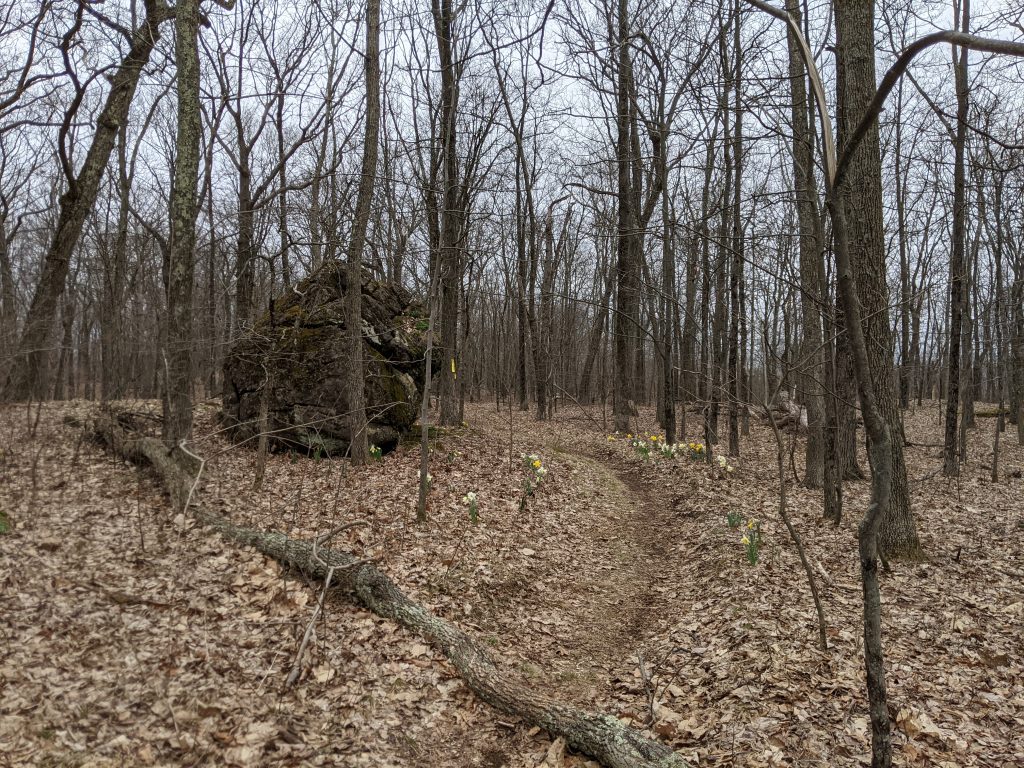 There was not a view at the top, and the same goes for Allumuchy mountain; there was no view to speak of.  However, both mountains are on the NJ1K list.  It was nice to be able to summit them both.

My nomination for New Jersey’s plant:

I used AllTrails to guess where the actual top of North Allumuchy mountain was: 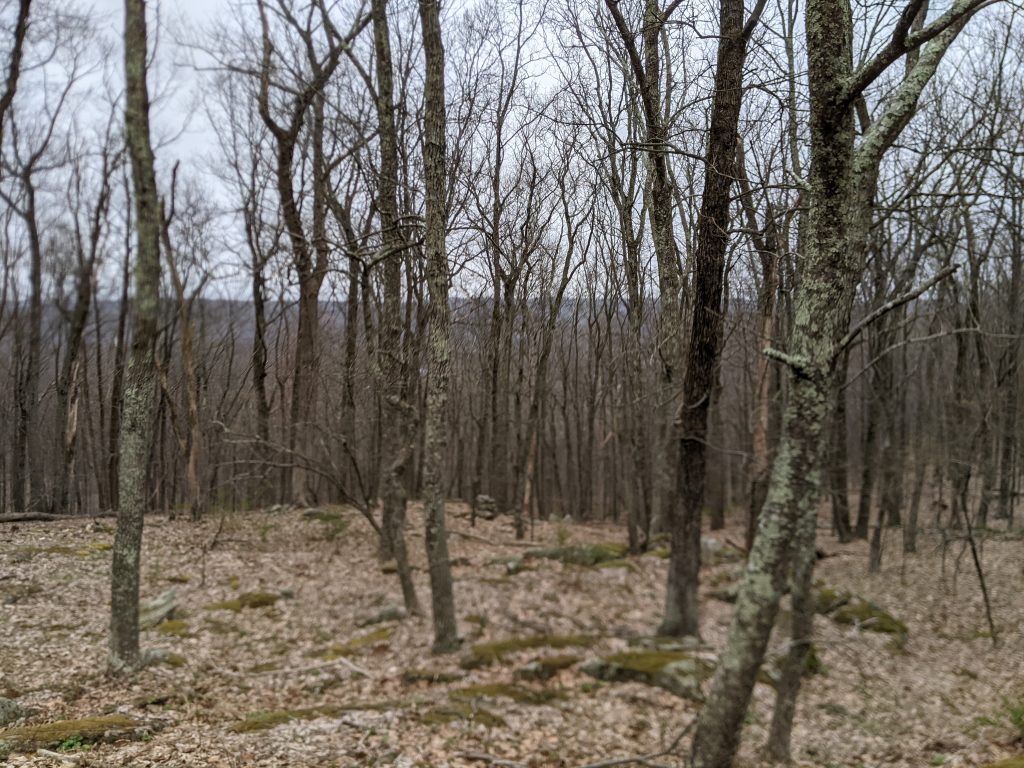 Before junctioning with the Ditch/Cardiac trail, the Dan Beard trail took a turn or two that seemed to head into the camp area.  However, I still had posted signs to my left.  And there were a couple unmarked trails that seemed to head towards  Route 80. 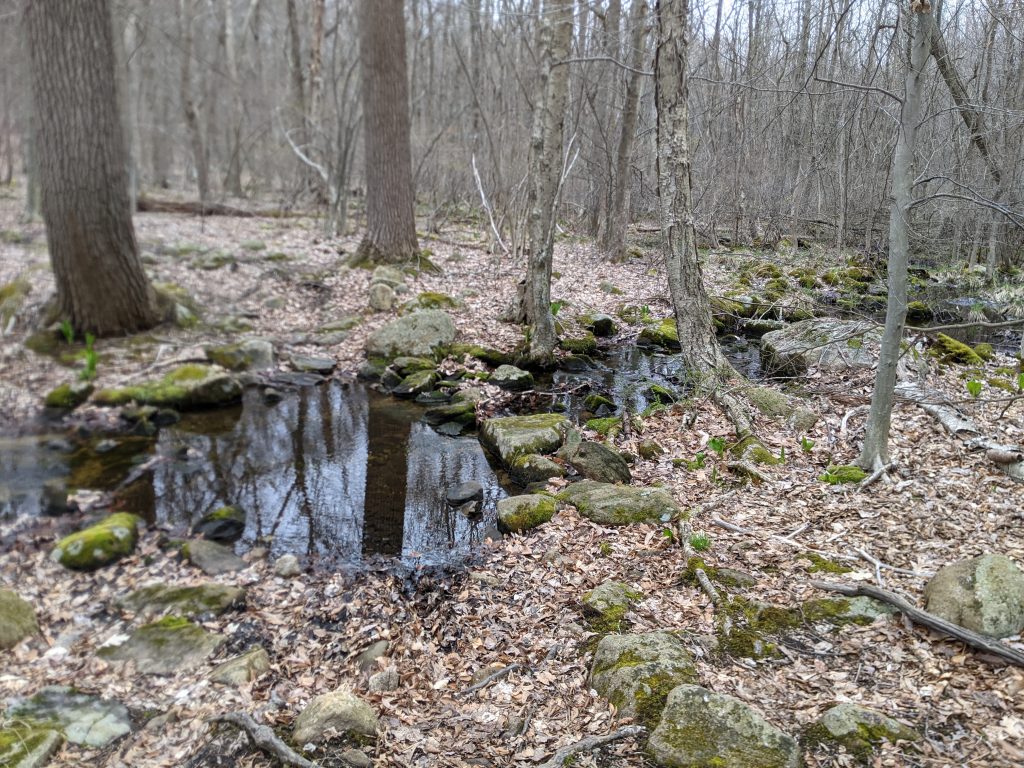 I finally met up with the purple-blazed Ditch/Cardiac trail,  and it was good to be “back on the map.” 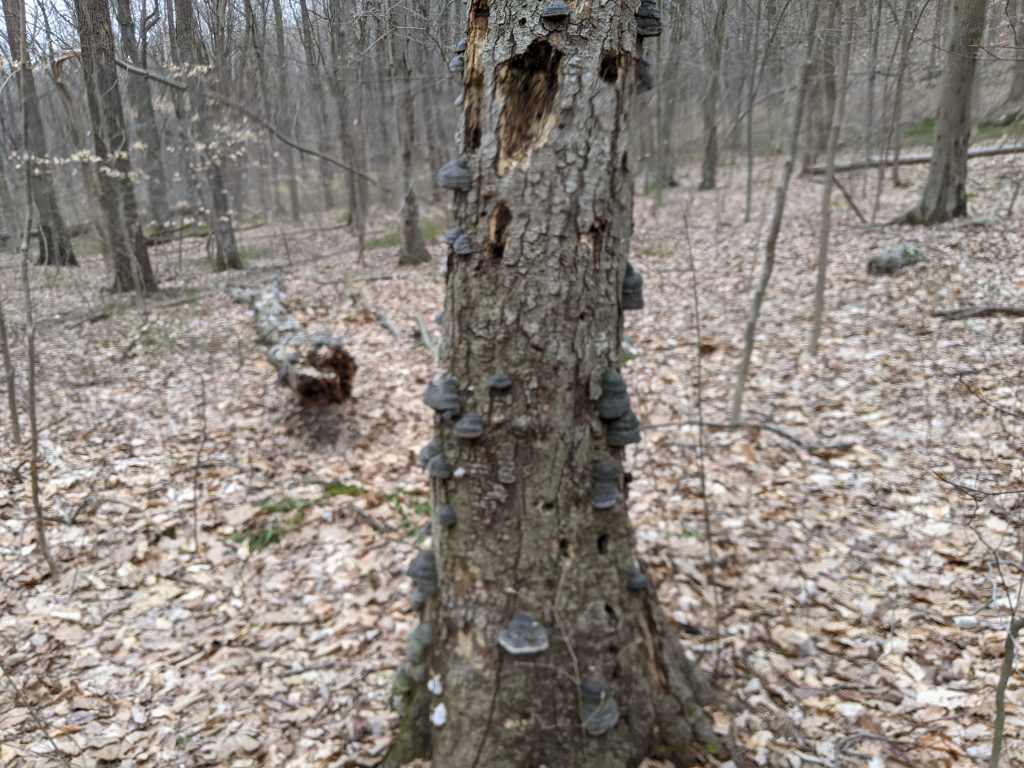 After crossing a small stream I came to a  small pine grove, where it was extremely quiet inside.  The trail goes through the pine grove, around the other side, before cutting back inside. 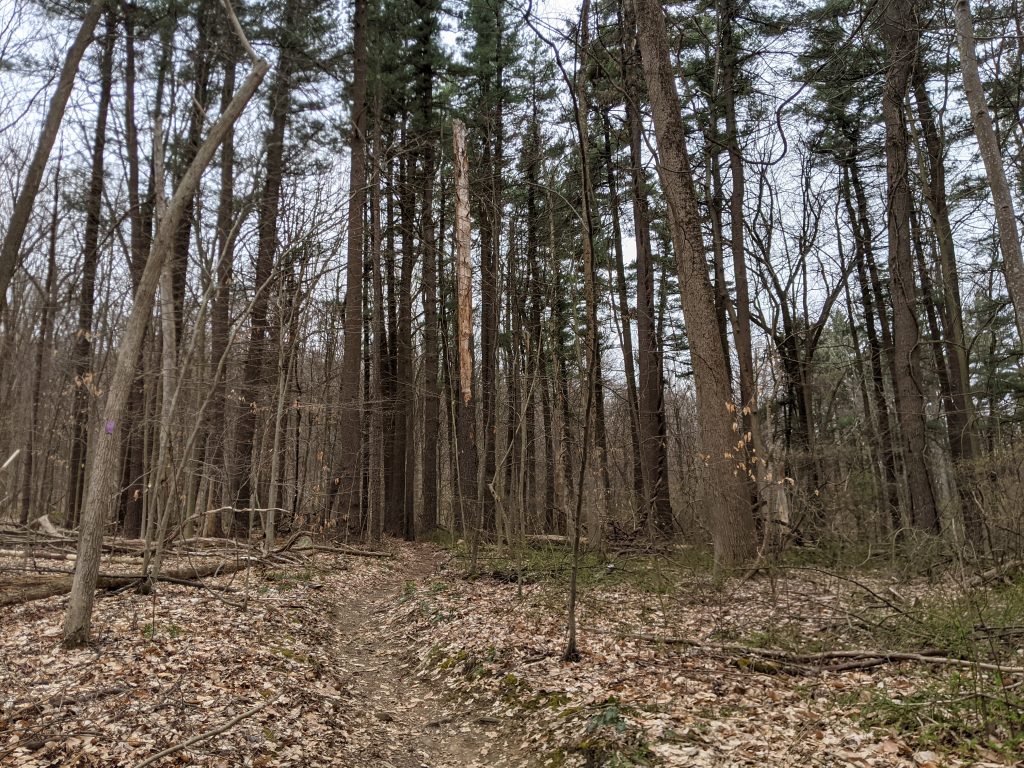 I took purple back to white.  Near the exit of the park, I heard loud motors and was passed by dirt bike and rider on a quad.  I’m pretty sure motorized bikes are not allowed in the park.  And it explains why some of the ruts of mud had really deep tracks.

For solitude this was a great hike.  I’d like to come back to do the area by Waterloo village or the by Deer Lake.  However, I will definitely have a route set out and have the appropriate maps. 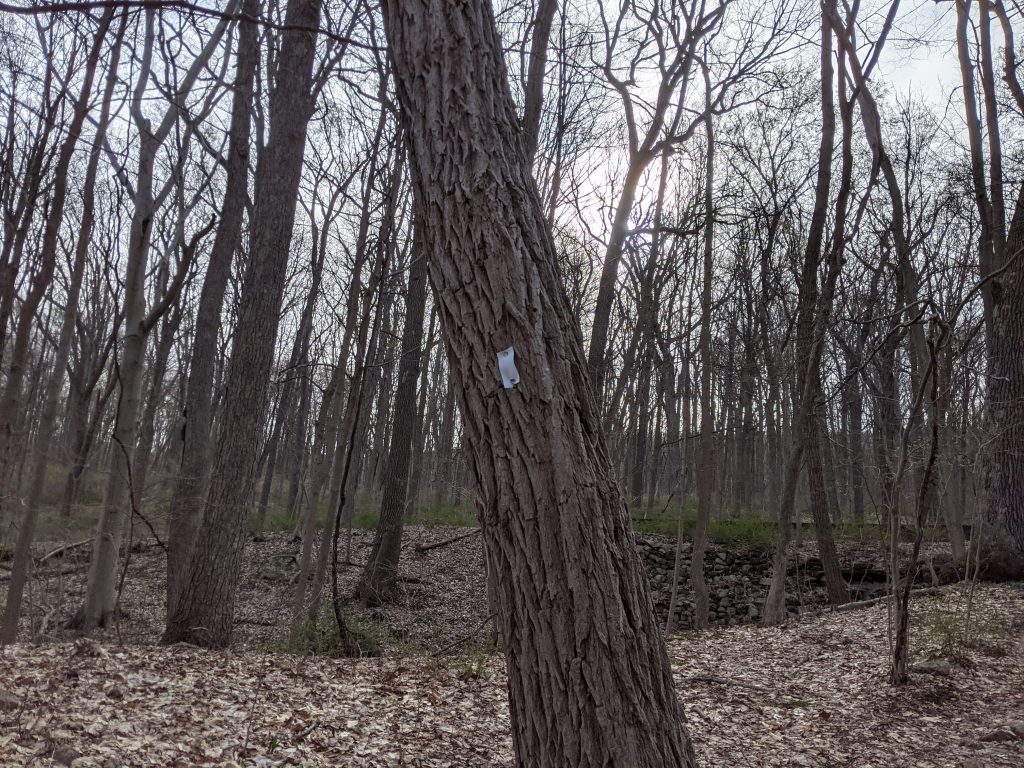 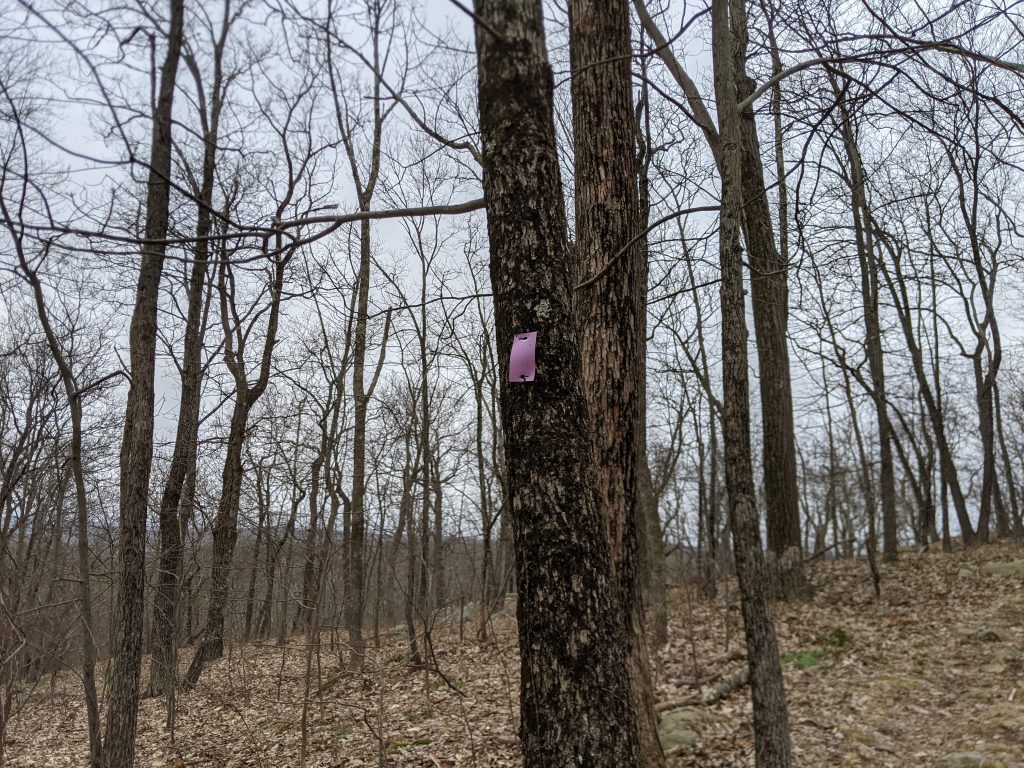 I have no idea what this correlates to: 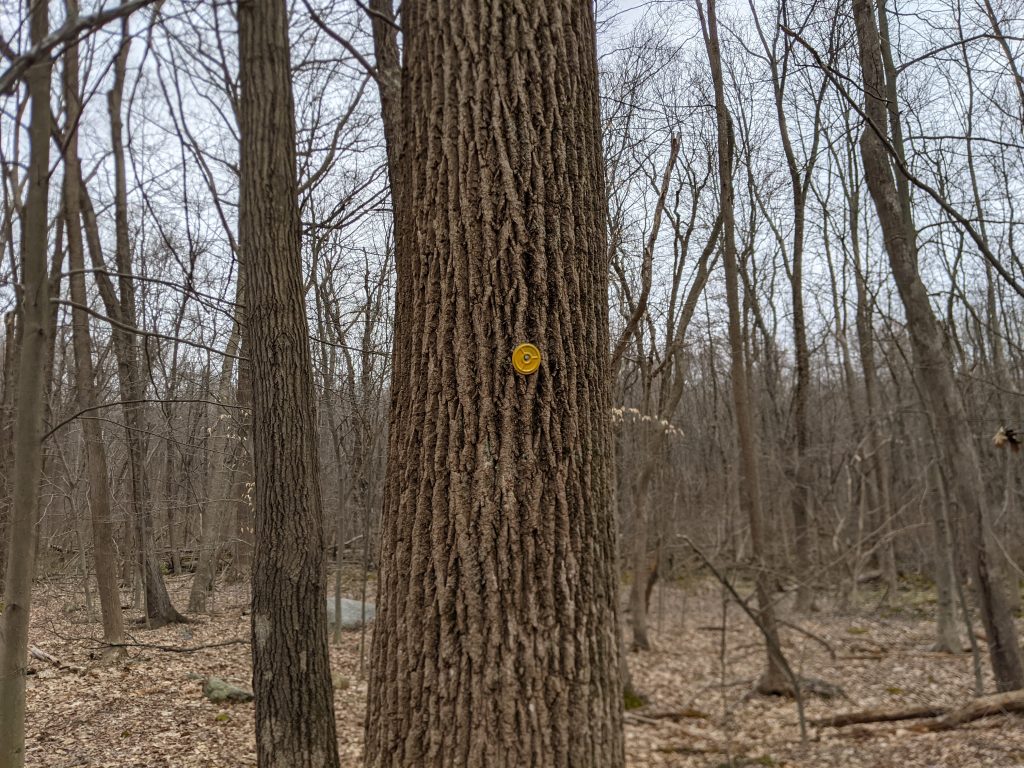