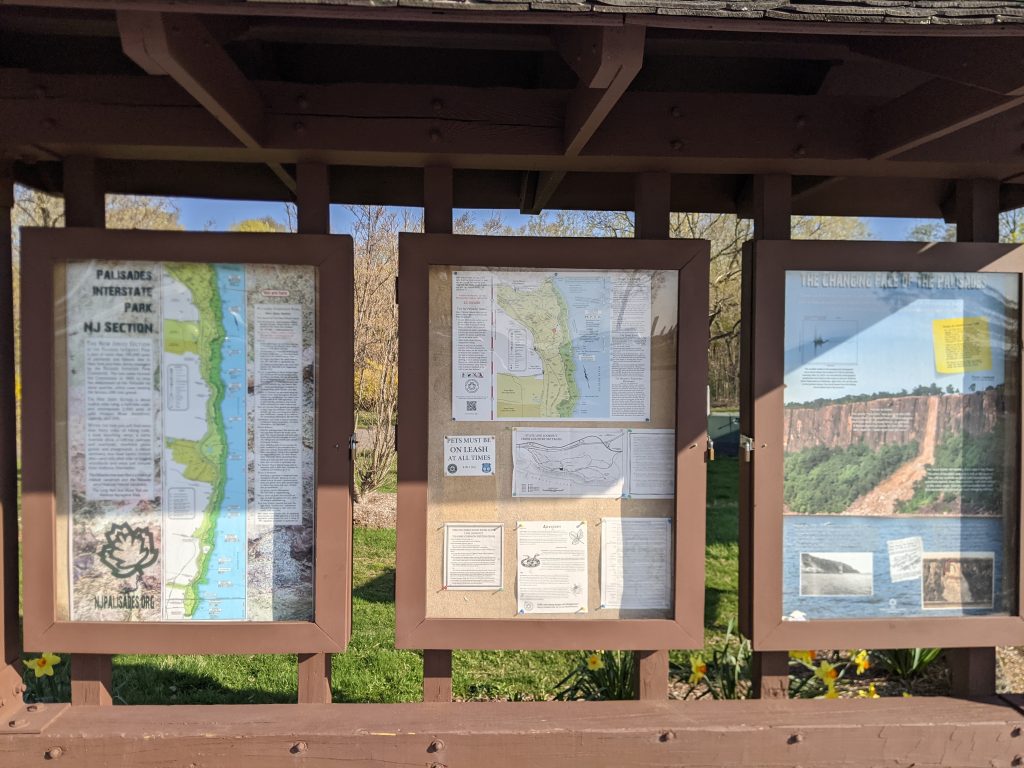 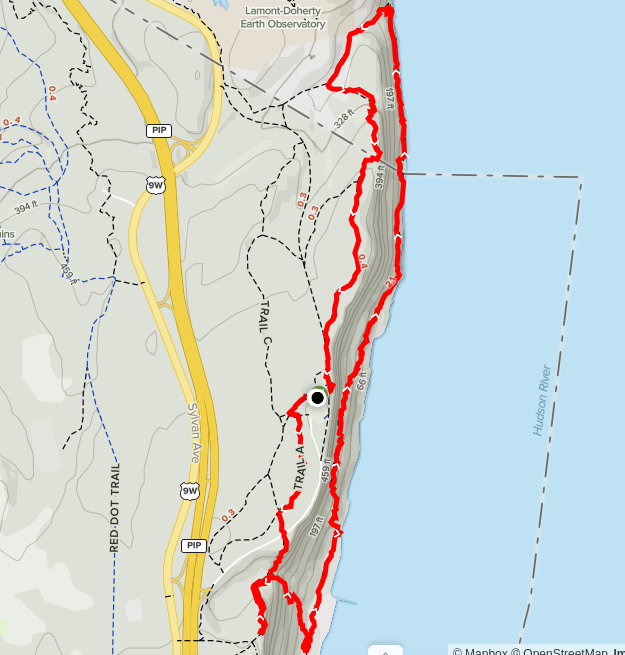 The last hike I took was in the solitude of the Allumuchy mountains; that would not be the case today.  Forget that there was bright sun; when I got to the parking lot around 8:00, there were already a whole bunch of cars there.  When I left cars were parked down the side of the access road.  It gets busy here.  I fully admit, I came here to check this hike off.  Make no mistake, this is grueling.  This is not your typical hike (whatever typical may be.)  And, there were LOTS of people.

I picked up the Long Path from the northwest corner of the parking lot. 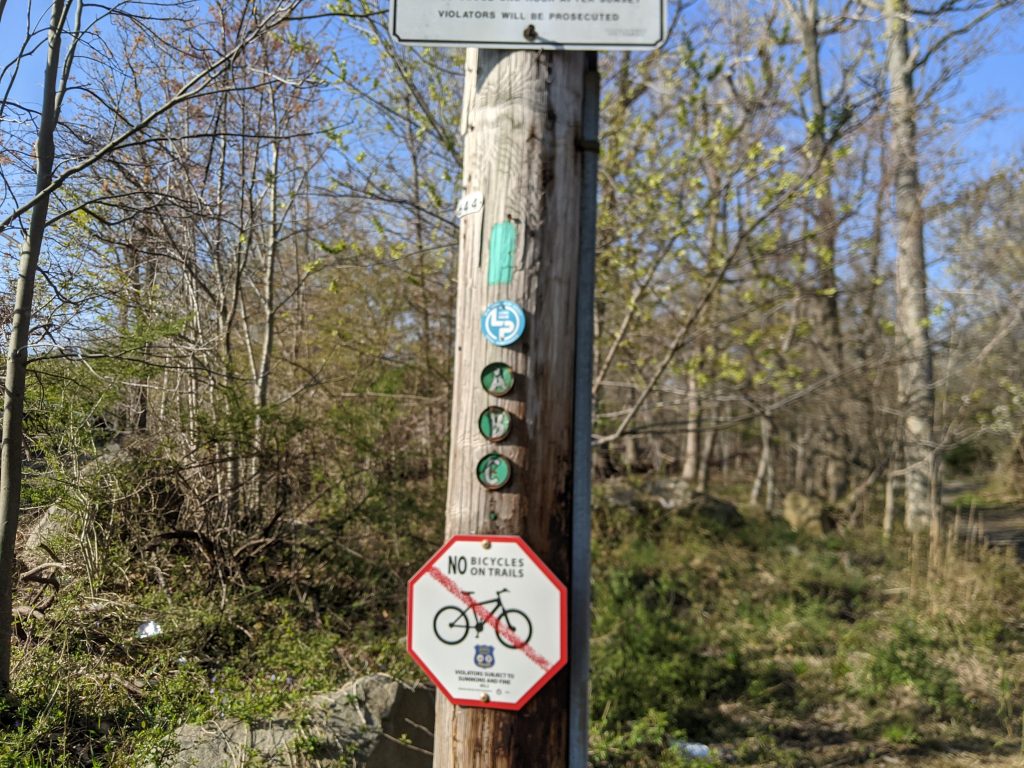 The trail up top is nice and flat, mostly dirt, with only scattered rocks. 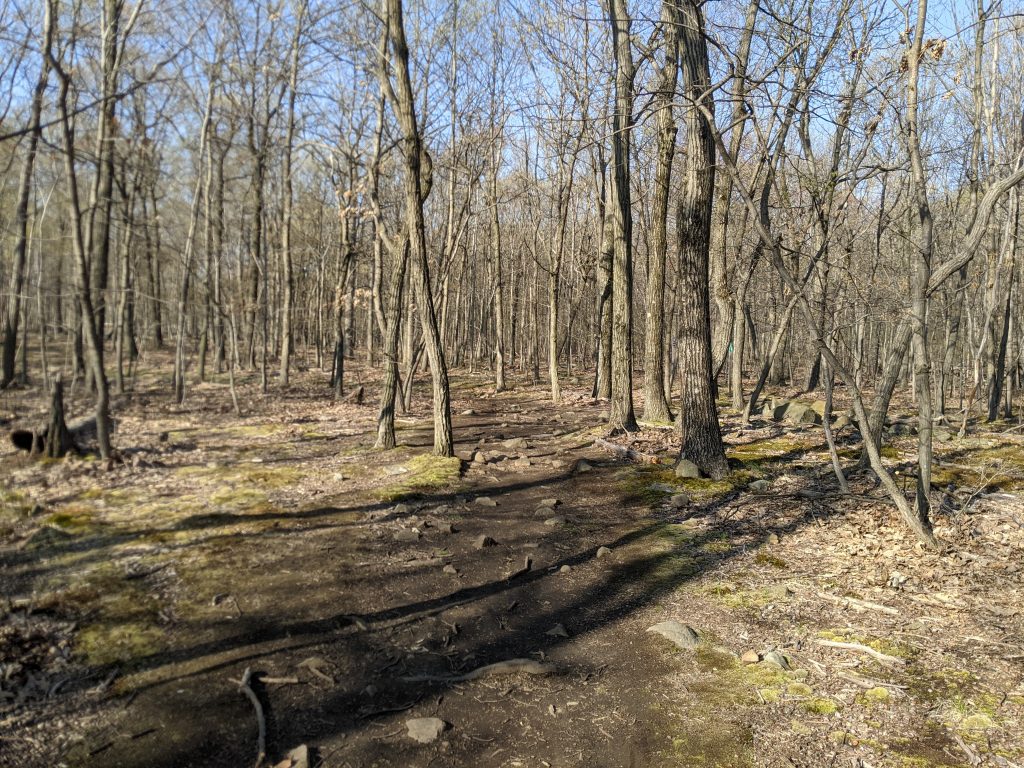 Once you cross the access road, it’s on to the cliffs. 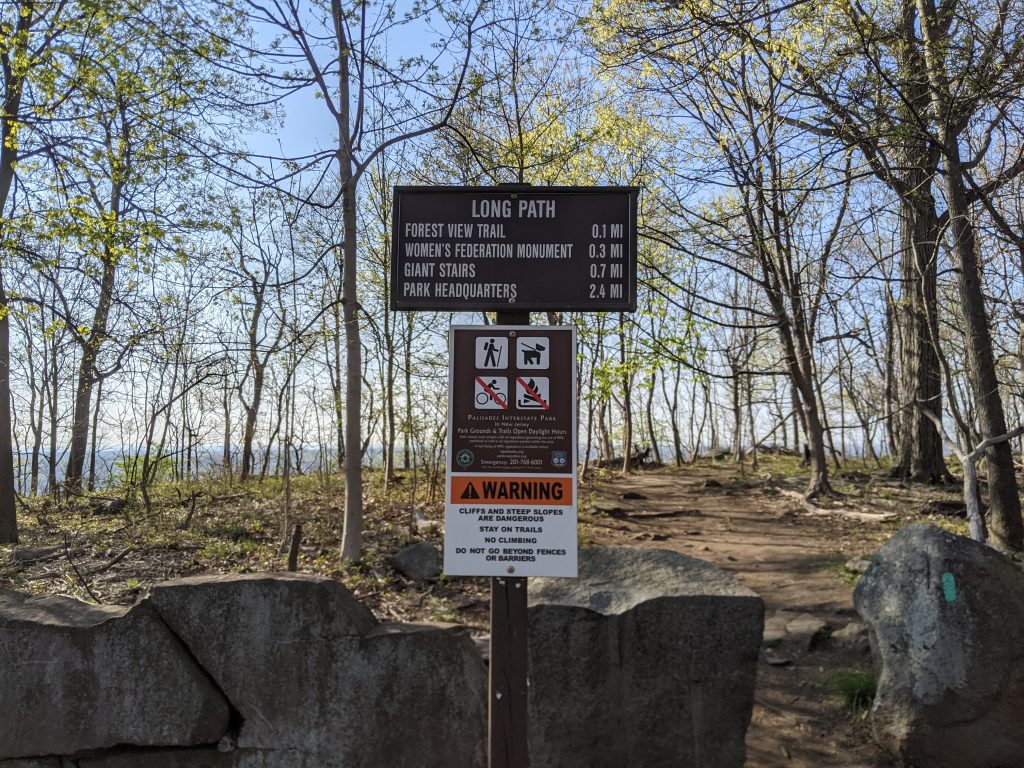 Before heading down, I hiked the half mile or so to the Women’s Federation Monument. 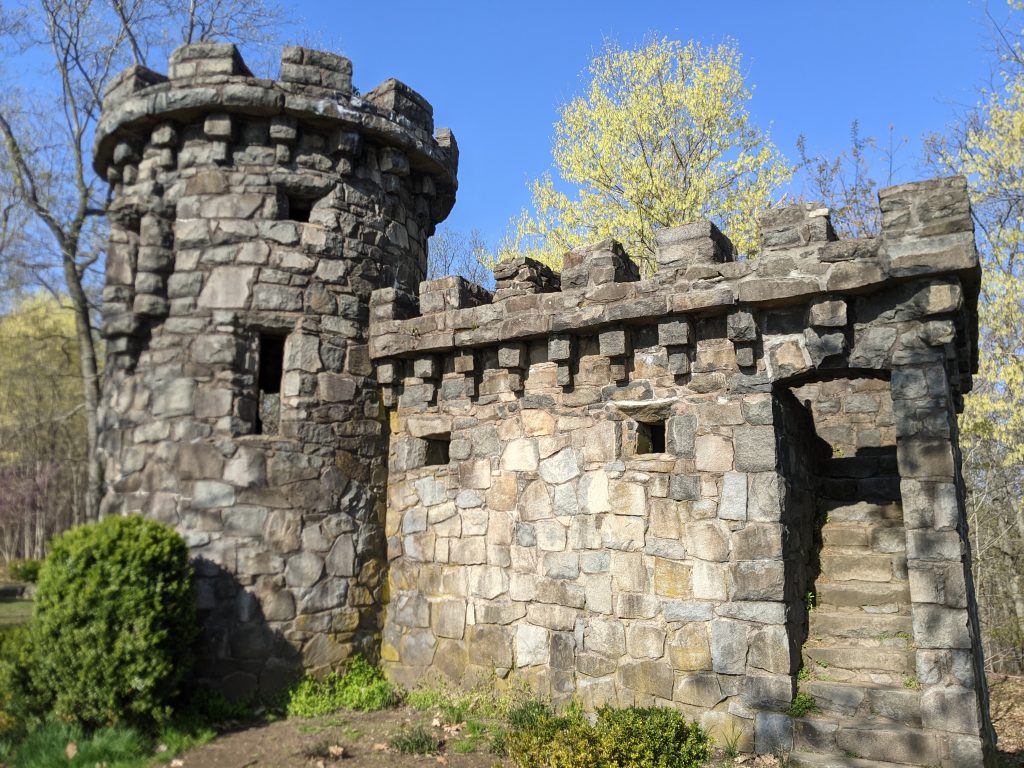 Climbing the stairs on the right gives you a view from the top. 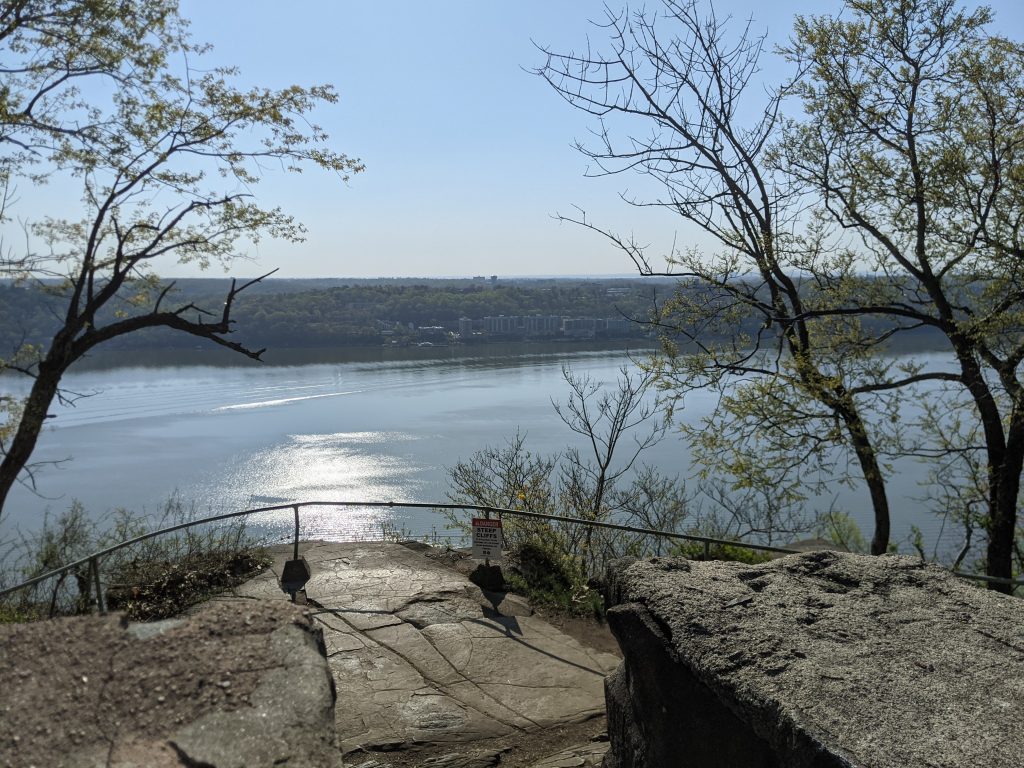 Back to the Forest View trail: 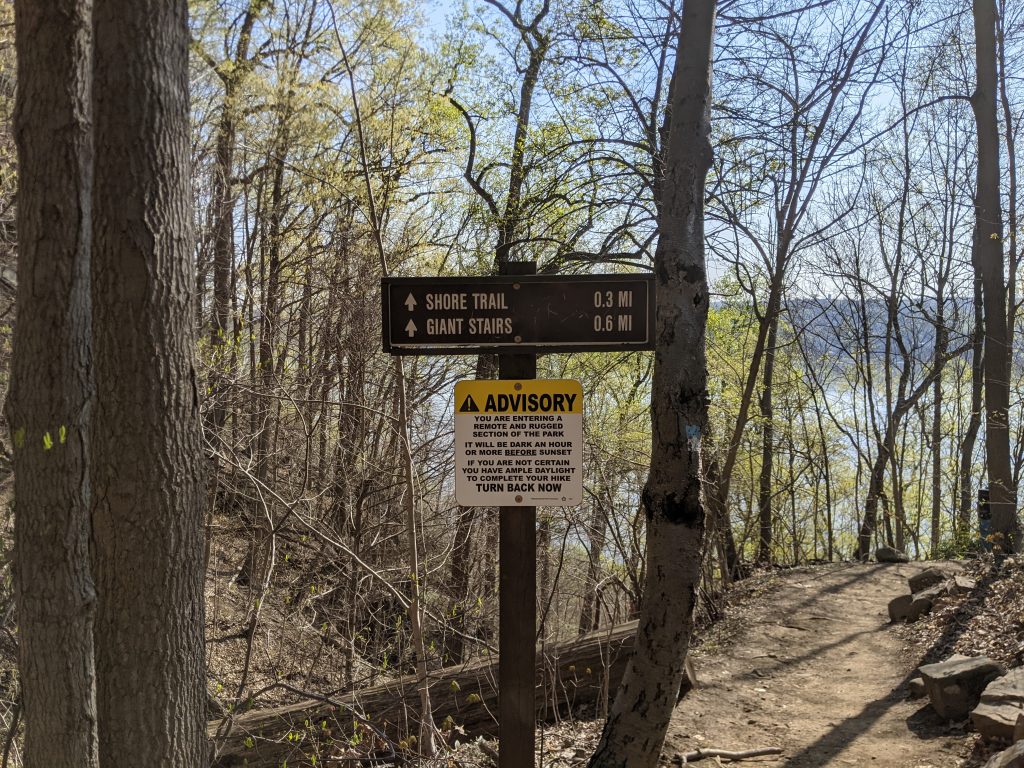 At this point, there are stone steps (not THE Giant Stairs, but stairs none the less) that head down the cliffs.  Yep, it’s pretty steep.  And the steps are worn making them feel like they slant down.  The views were insane, but I was more concerned with making it down the steps and not taking the express route to the bottom.  It was not my favorite part.  This picture is just a sample of what it looked like but does not do the steepness justice. 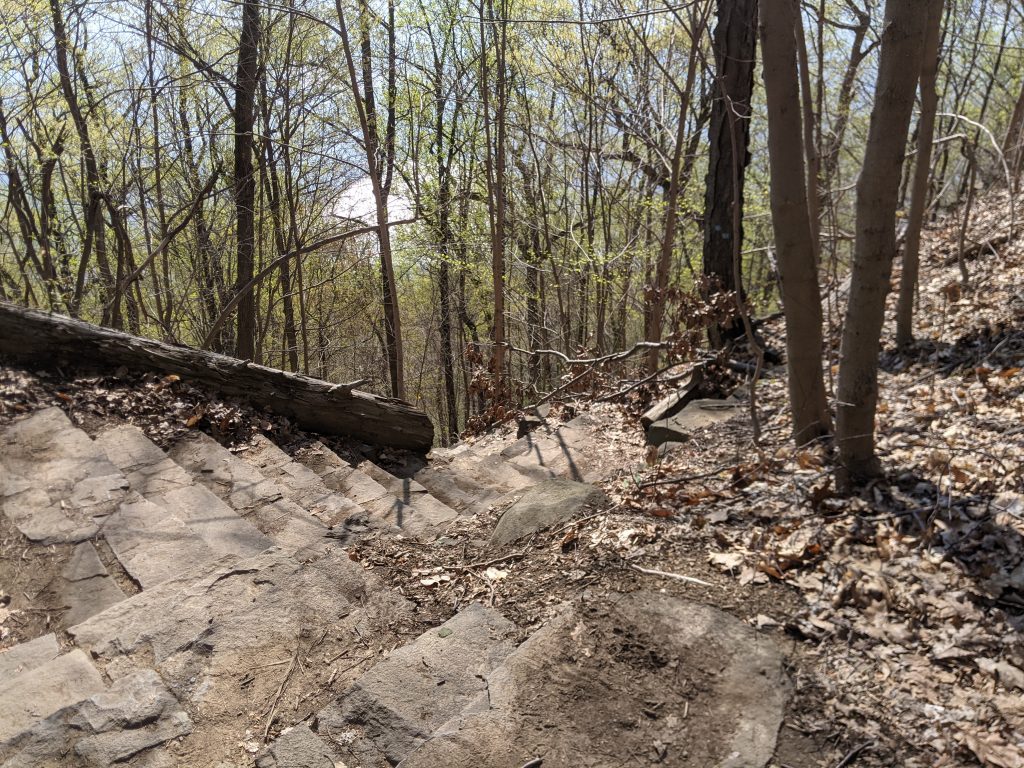 And while we’re at it

The Shore Trail is wide and flat just before the Giant Stairs.  It’s very serene, until: 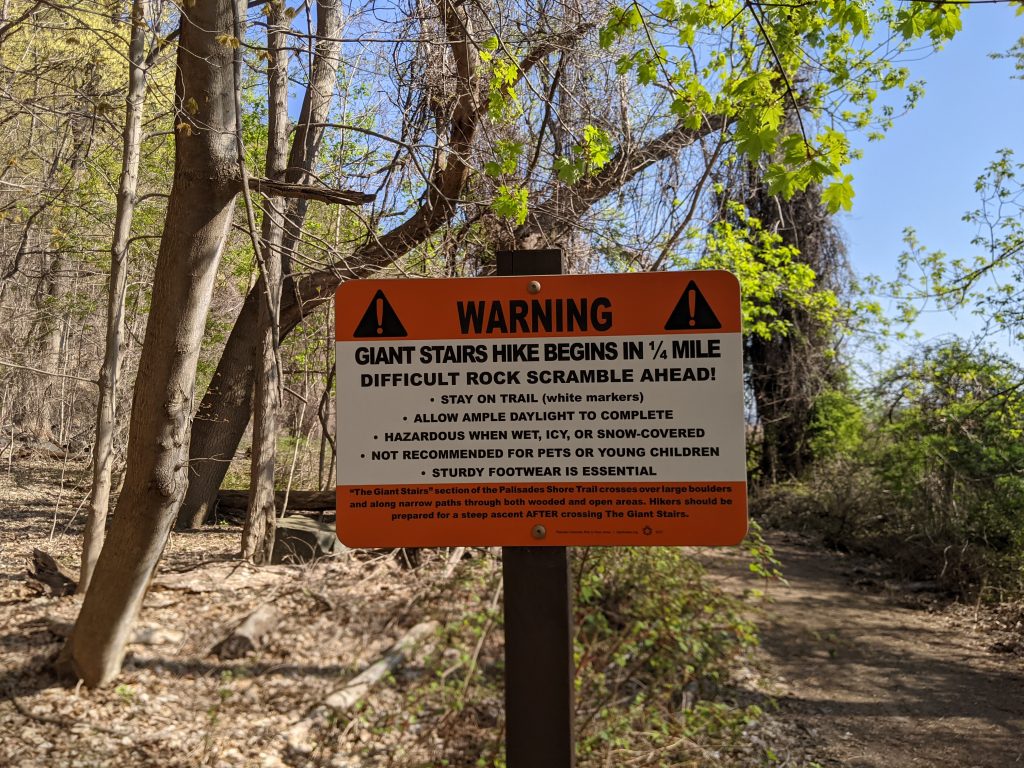 There’s lots to see before the Giant Stairs. 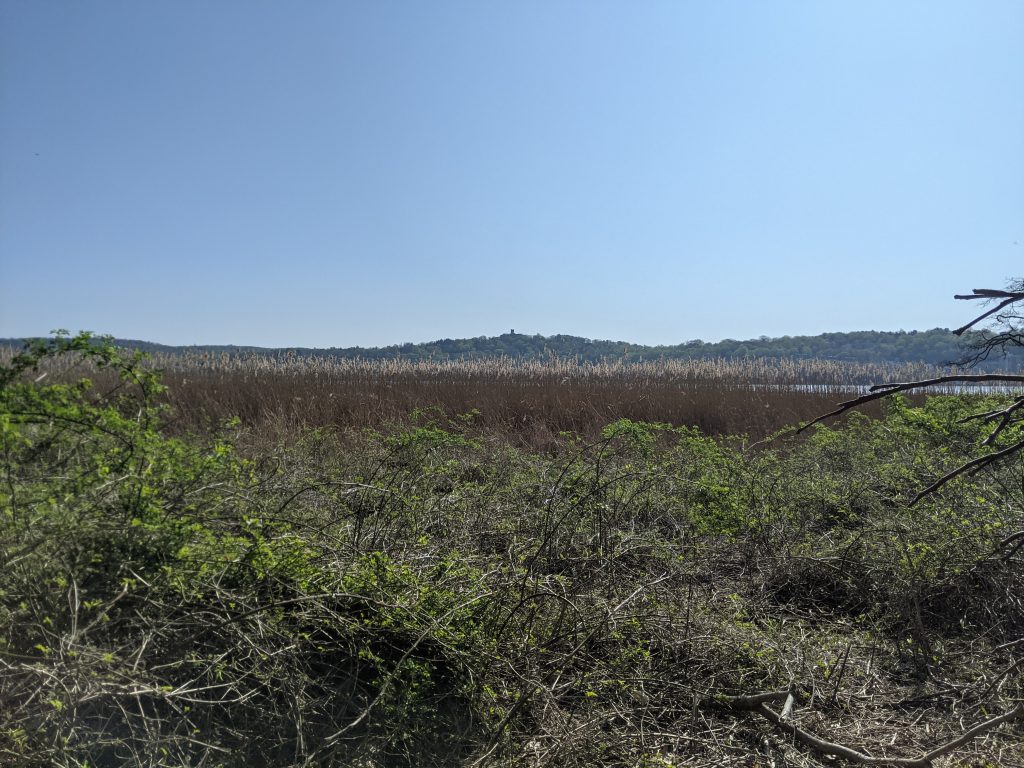 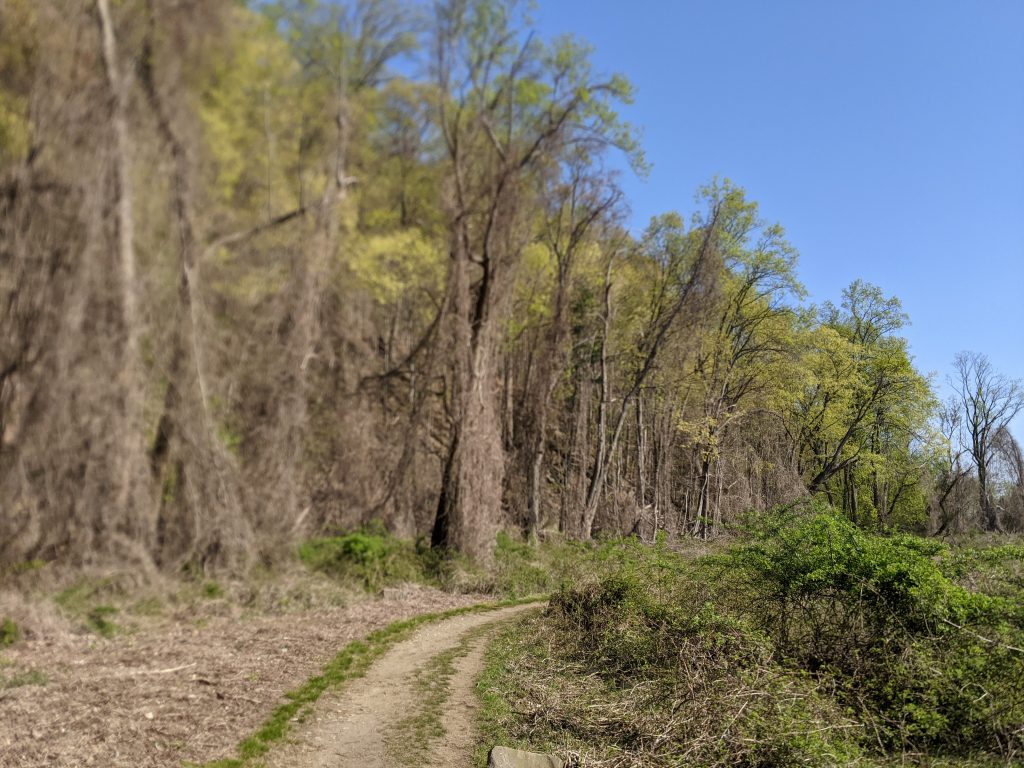 And then, we’re off. 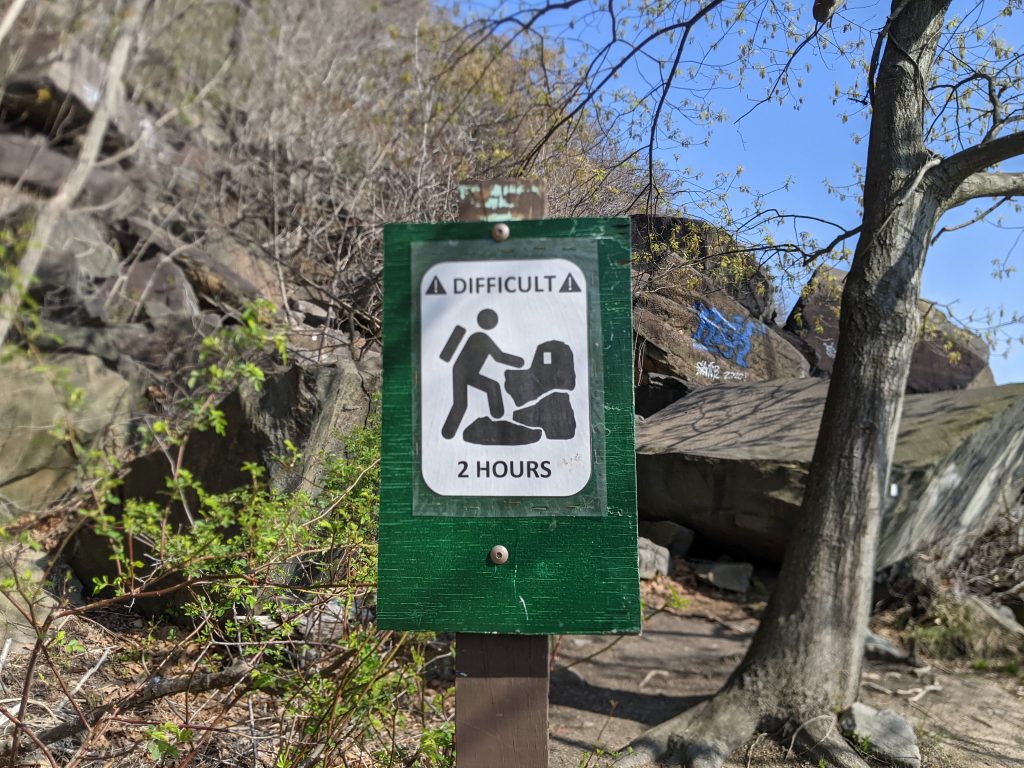 At this point, before starting the rocks, I took off my fleece – and it was a good thing.  It got much warmer and the scramble was difficult and exhausting.  Further, this was a good place to stow the trekking poles; there would not be a need for them until the Giant Stairs were finished.

And onto the Giant Stairs. 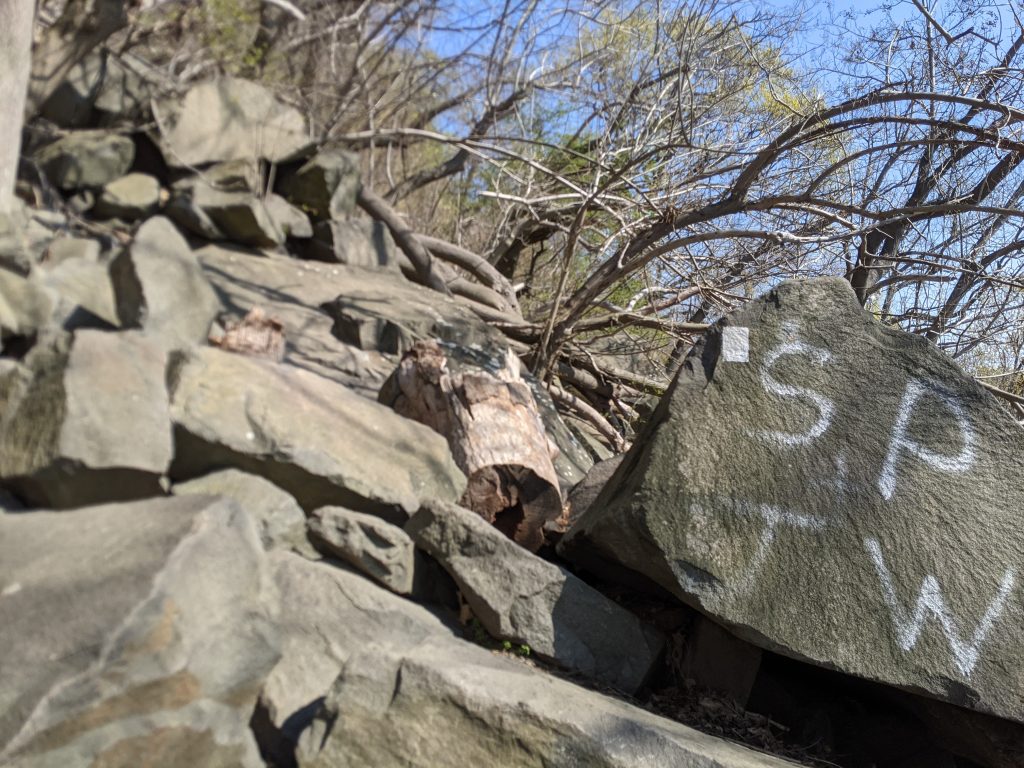 At one point there opened up a great view of the cliffs.  The lighter color is where the rockfall of 2012 occured. 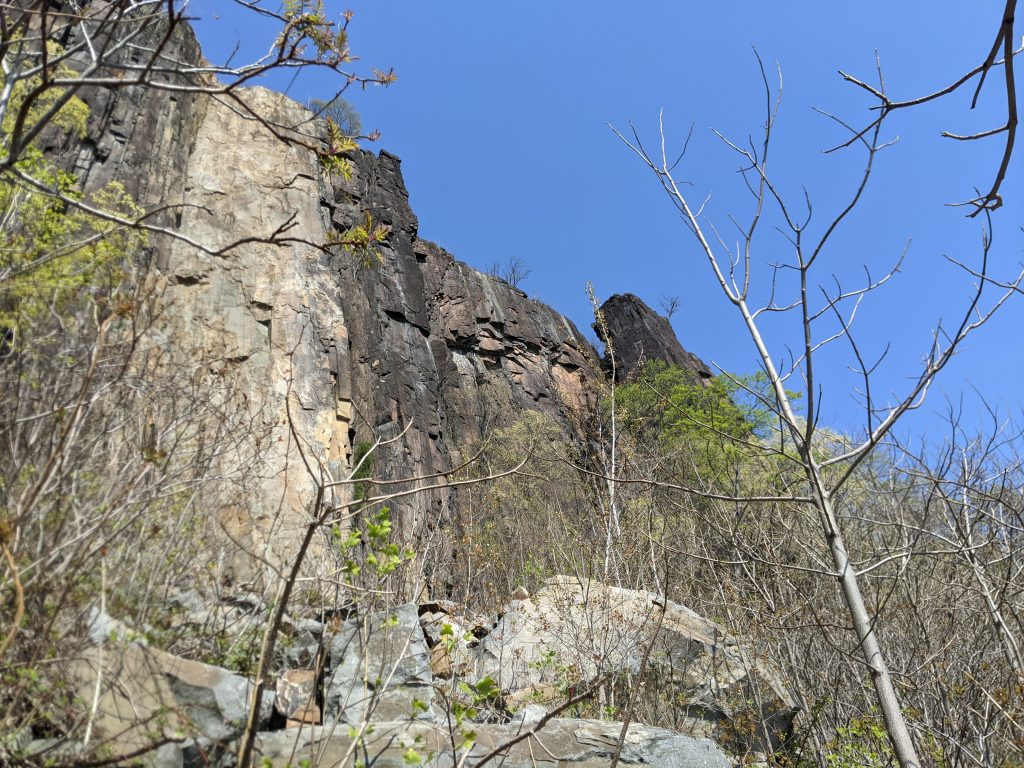 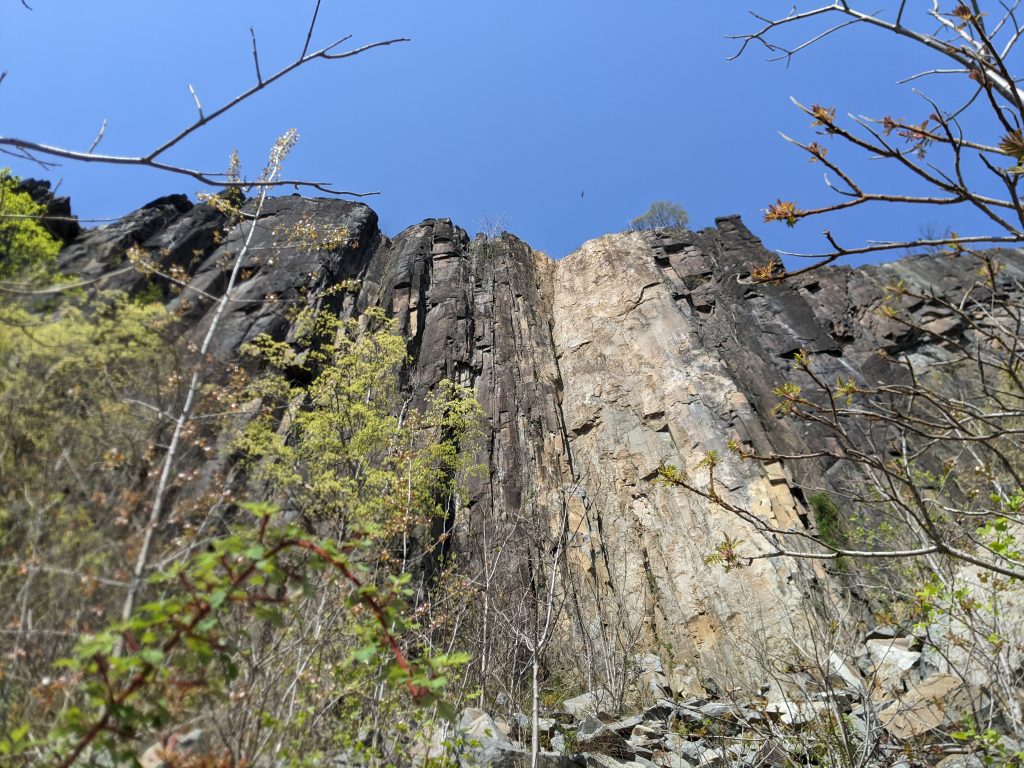 Here’s just one shot of a significant portion of the trail. 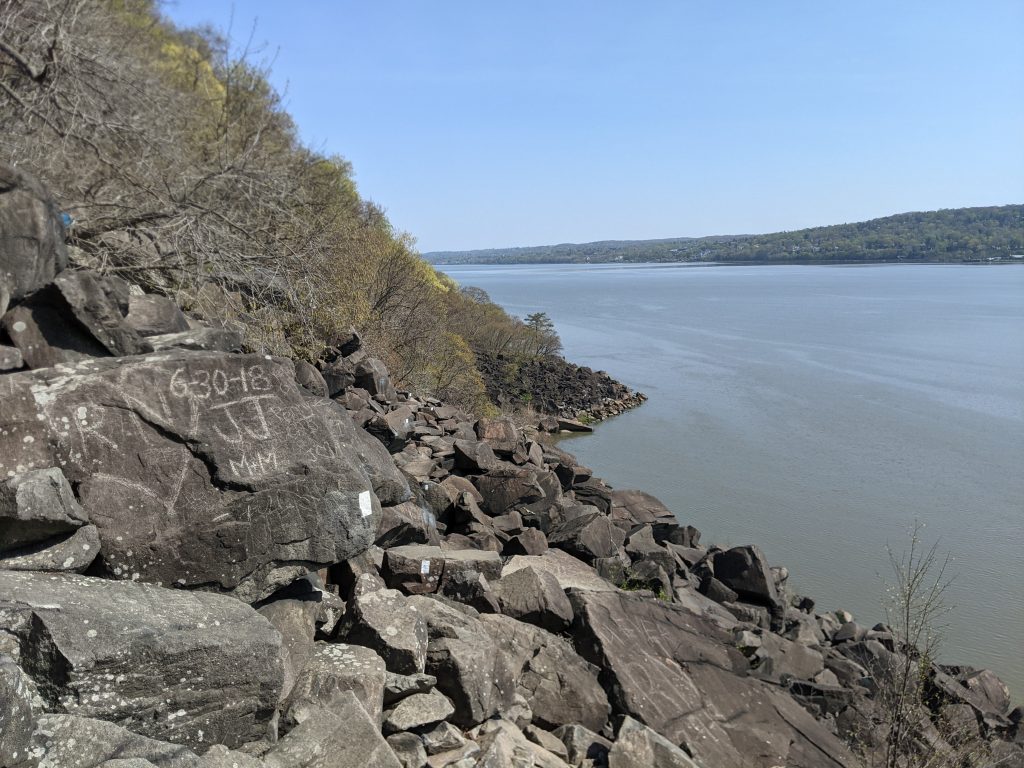 You can see how much further to go by the rocks that are dead center in the picture.  The last section of the Giant Stairs I called the Jetty, because that’s what it felt like I was walking on; a jetty that sticks out into the ocean.  And, you can hear the water below you.

When finished with the Giant Stairs, the trail returns to a dirt path.  I followed this all the way to Peanut Leap Cascade, where I had a nice long lunch. 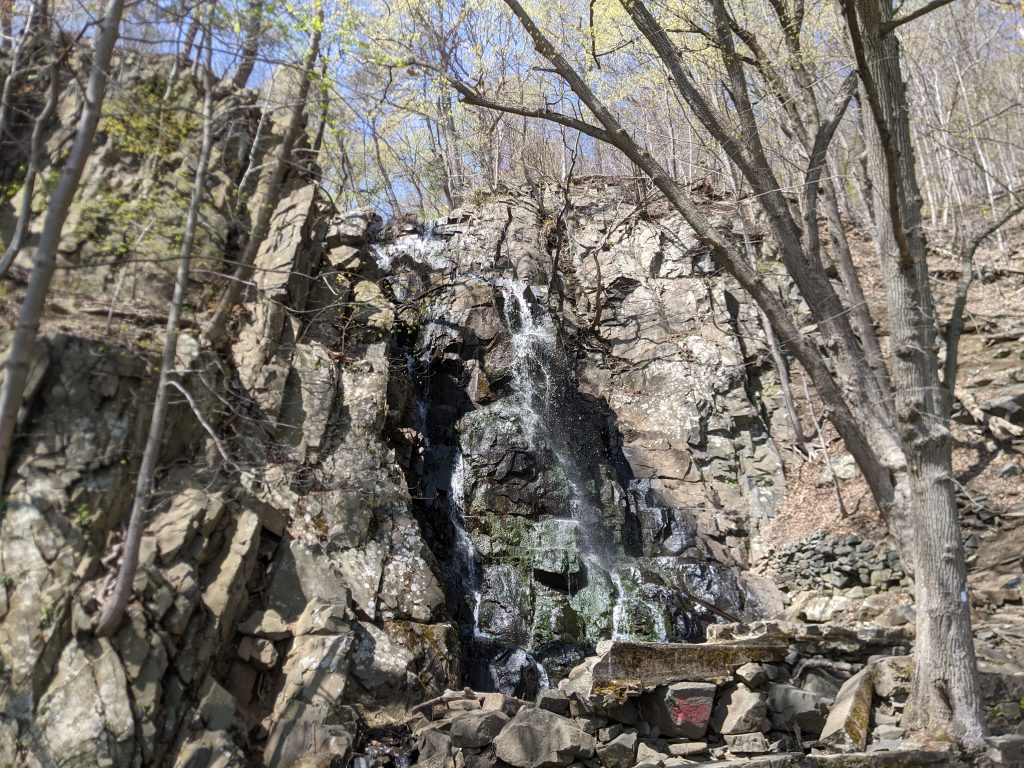 After lunch, I finished up the Shore Trail, which goes straight up the hill; parts of which are very steep.  I didn’t bother with pictures, I wanted to get to the top.  Once you get to the top, the trail becomes more “normal” and some really nice views open up. 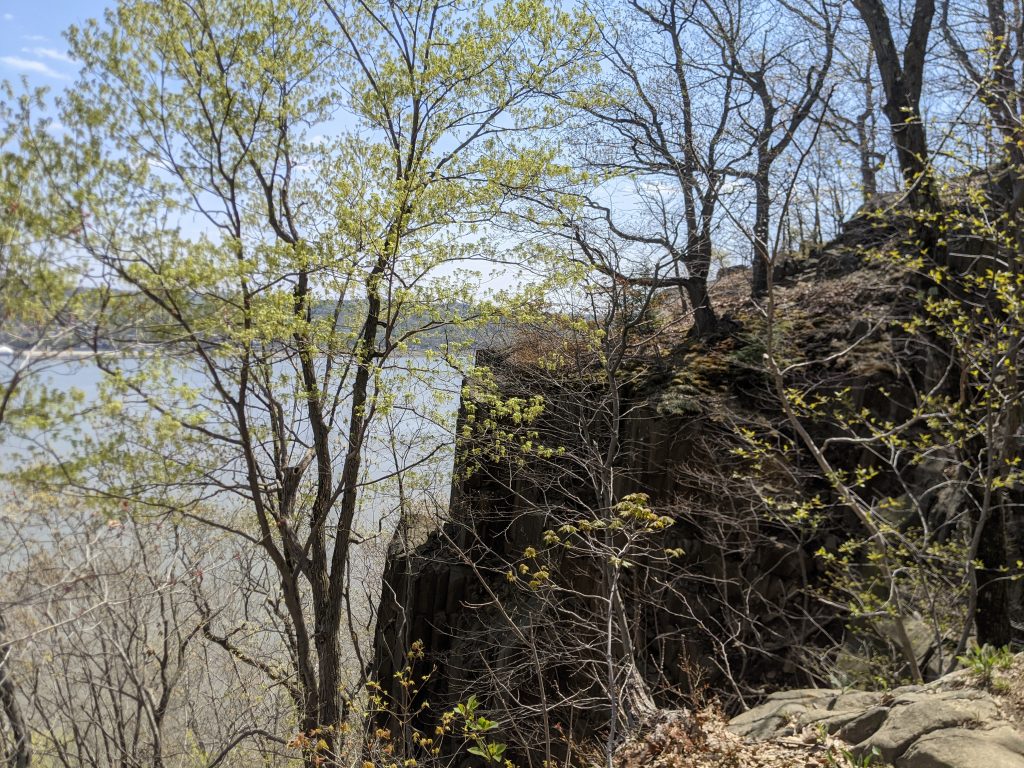 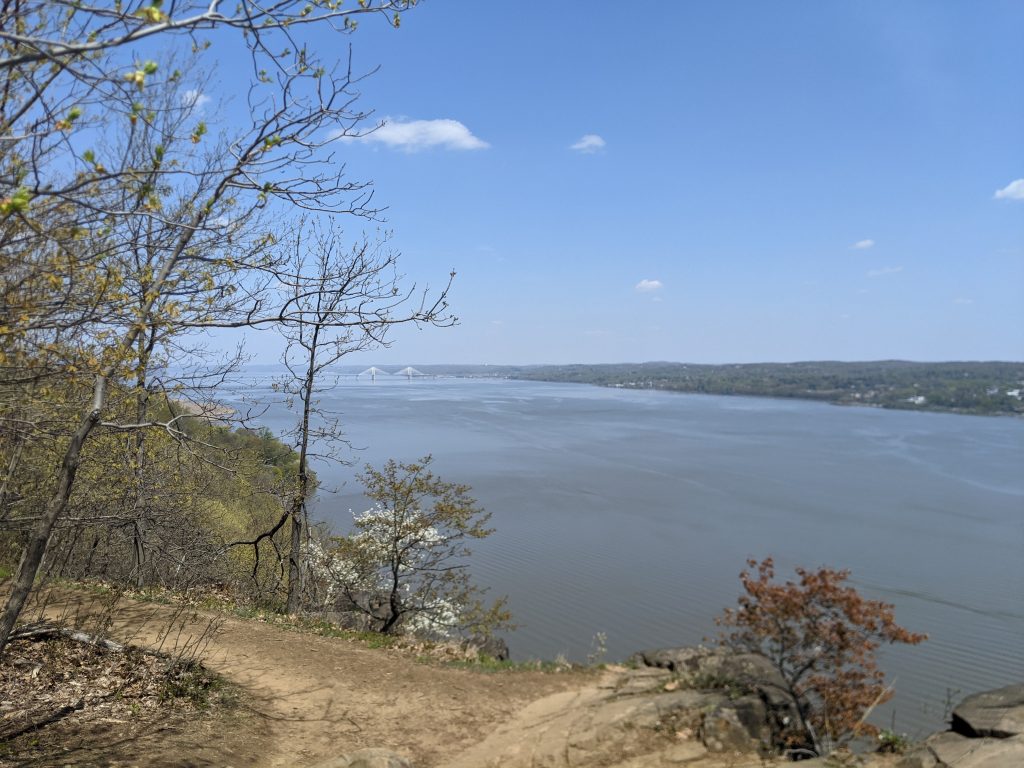 There is one more section of stairs.  And at the top……..HEAVEN. 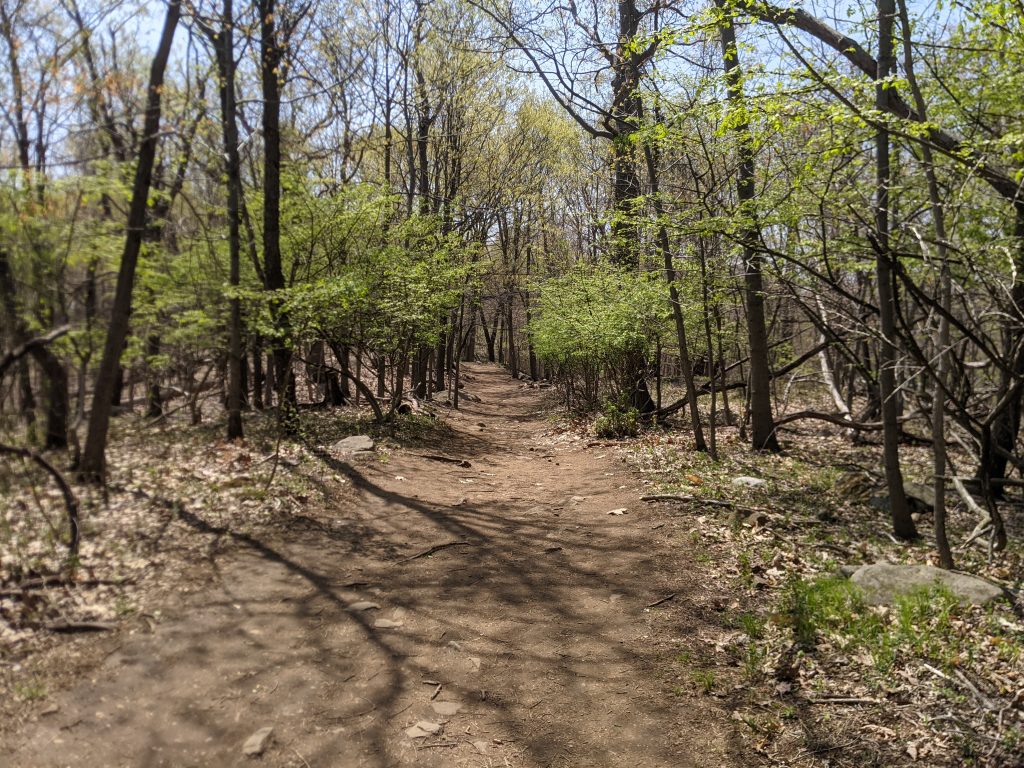 This goes right back to the parking lot.

And at the parking lot, there are numerous spots for pictures and views. 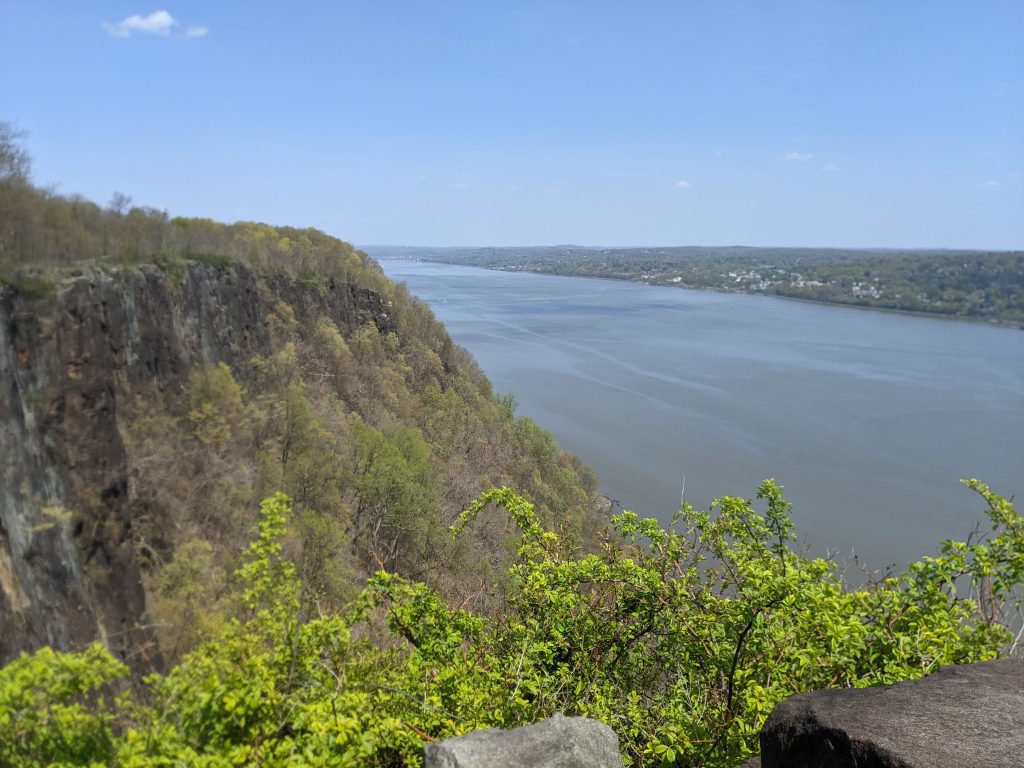 This hike is an absolute workout.  Like Mt. Tammany and Stairway to Heaven, it was way too crowded for my tastes.  There are a couple of spots on the Giant Stairs that are difficult to navigate – and yet there were people who blew on through without care to the people trying to negotiate the obstacles.  At one or two locations I easily waited 20 minutes or so for the line to thin out.

The views were awesome, though.  It was neat being a stone’s throw from New York City.  There is the added bonus of crossing into and out of New York (and surprisingly, there wasn’t a toll.)  There is a whole section of the park in New Jersey to the south to explore. 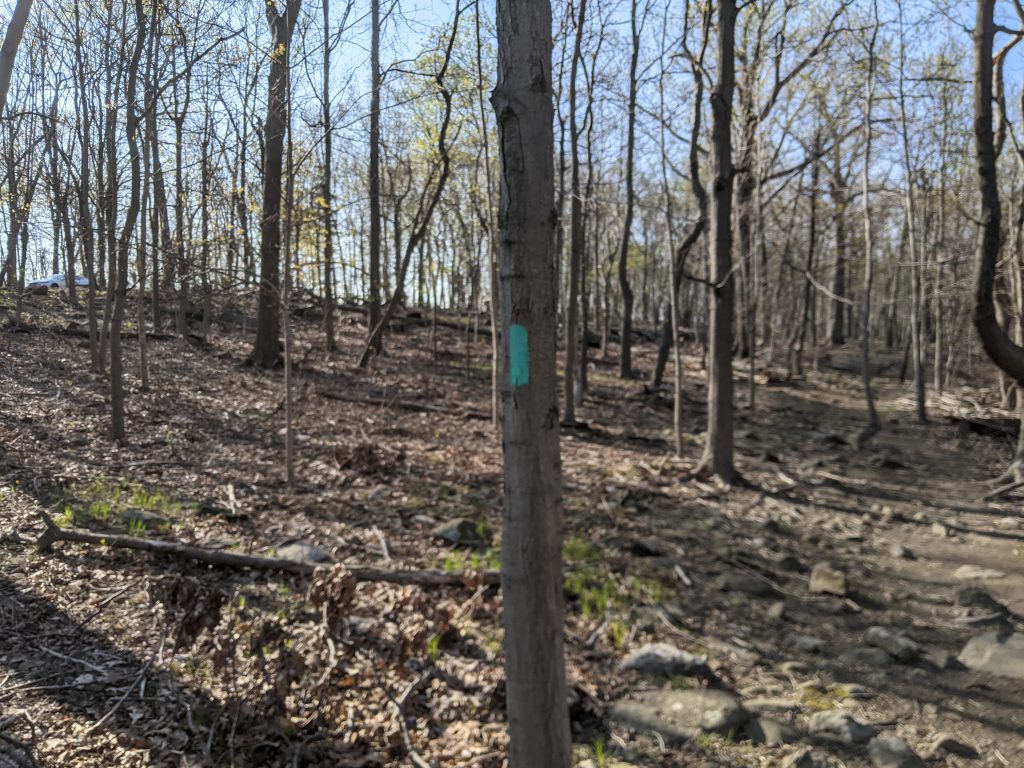 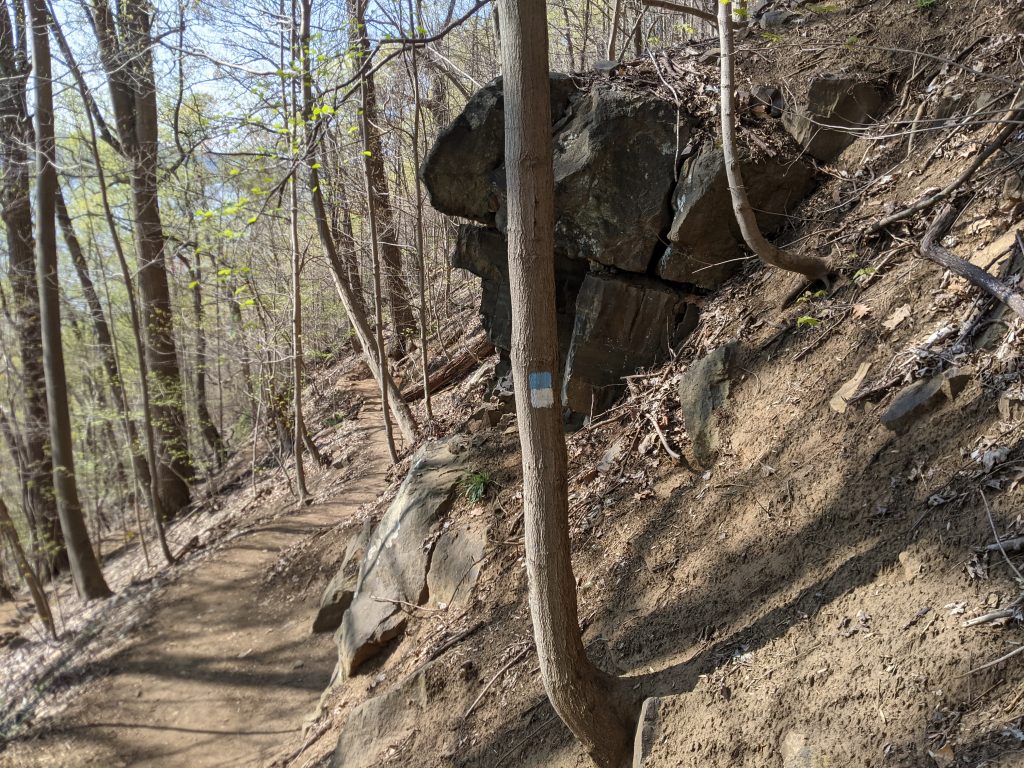 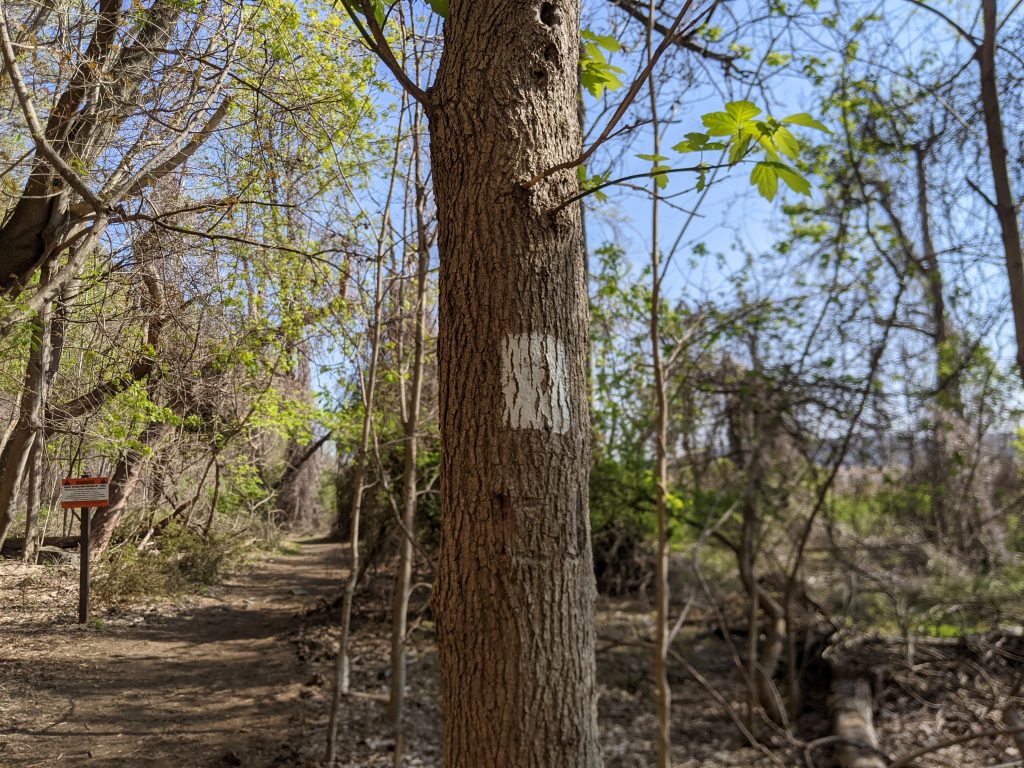