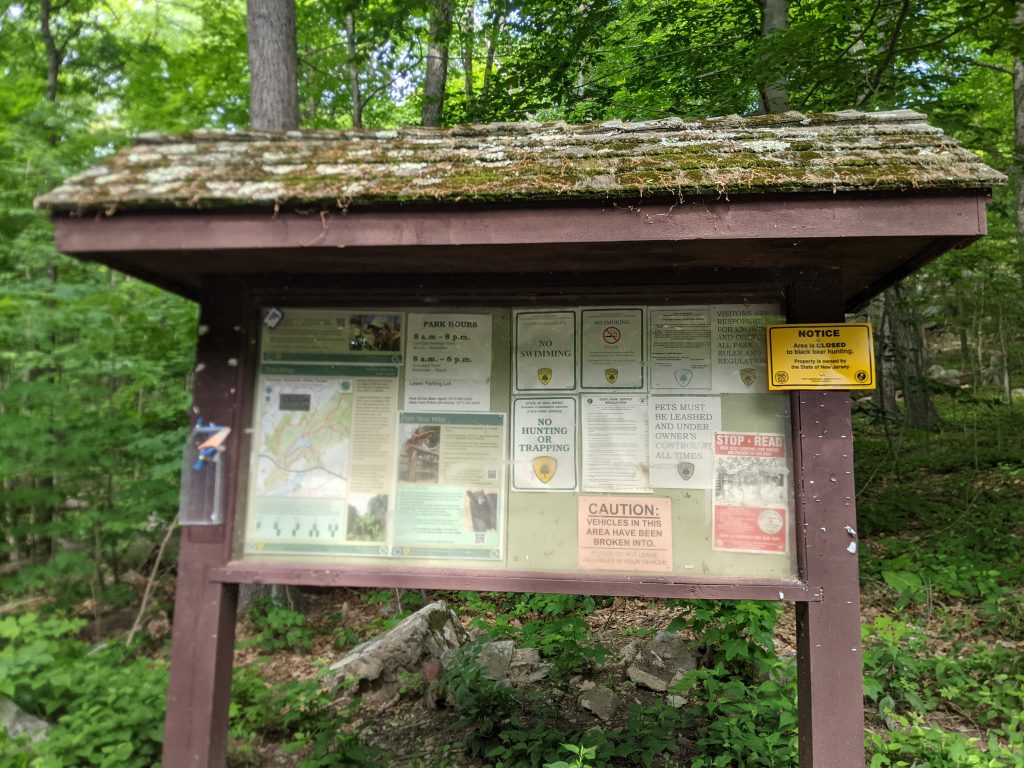 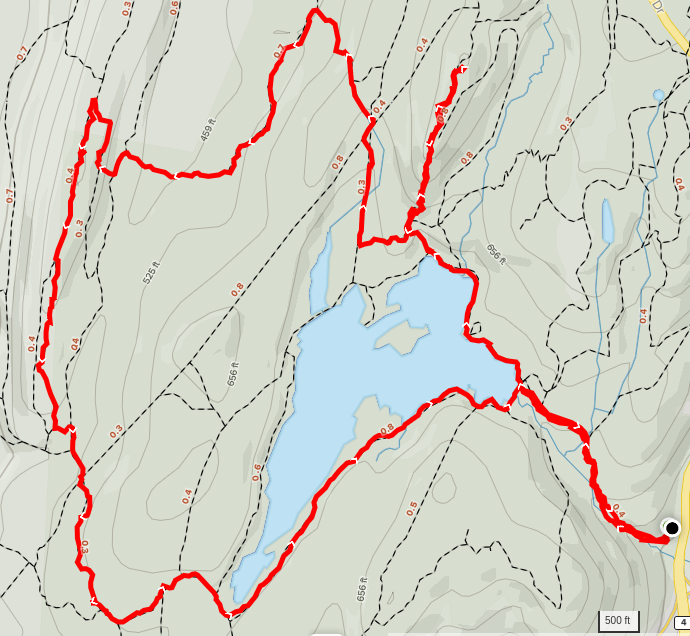 Last week was a short hike.  I wanted to clock some miles this week; however the holiday weekend didn’t look good.  I happened to have Friday off, and waking up earlier than I wanted to and seeing the sun out, I decided to hit the trails today, as I didn’t think I would get to for the rest of the weekend.  (As I type this, temperatures have plummeted and are barely cracking 50.)

I’ve read about this area in the past, and the ruins of Van Slyke castle are pretty famous.  The ruins and the Wanaque Ridge trail were on my agenda for the day.  And while it started out sunny with great temperatures, I knew that bad weather would be rolling in.  I’m glad I went, and yes, I beat the bad weather.

500 feet in, on the Ramapo Lake spur trail, I was greeted with: 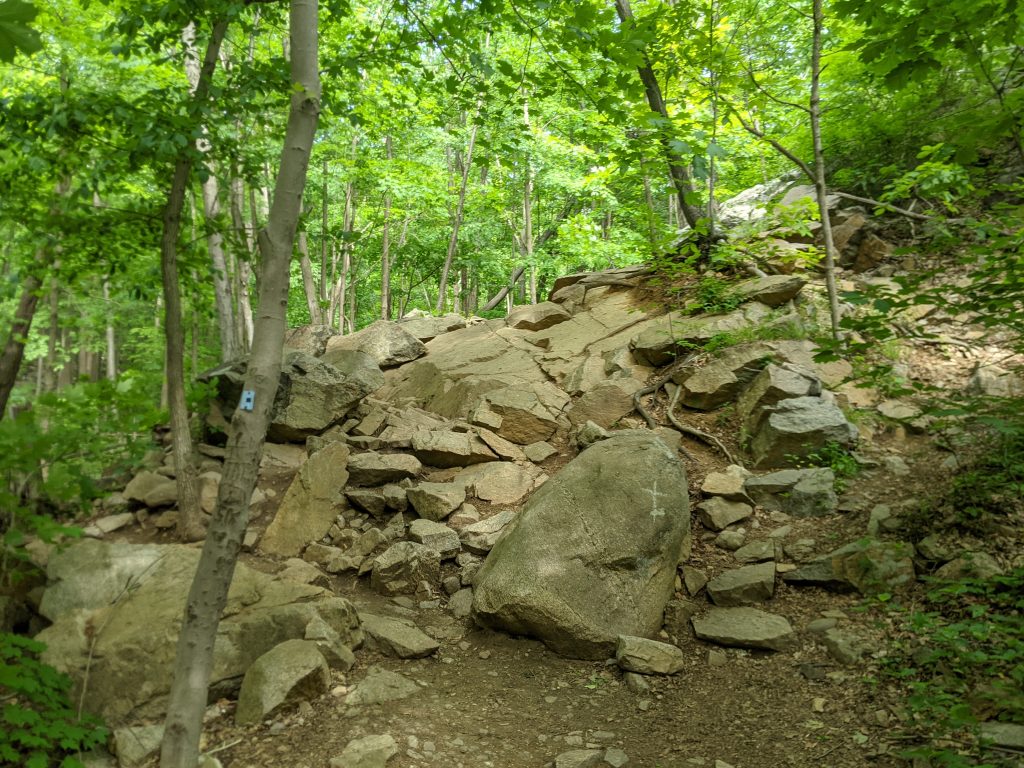 The NY/NJ Trail conference does a great job maintaining trails here, and you can see the stream crossing, though the stream was pretty low. 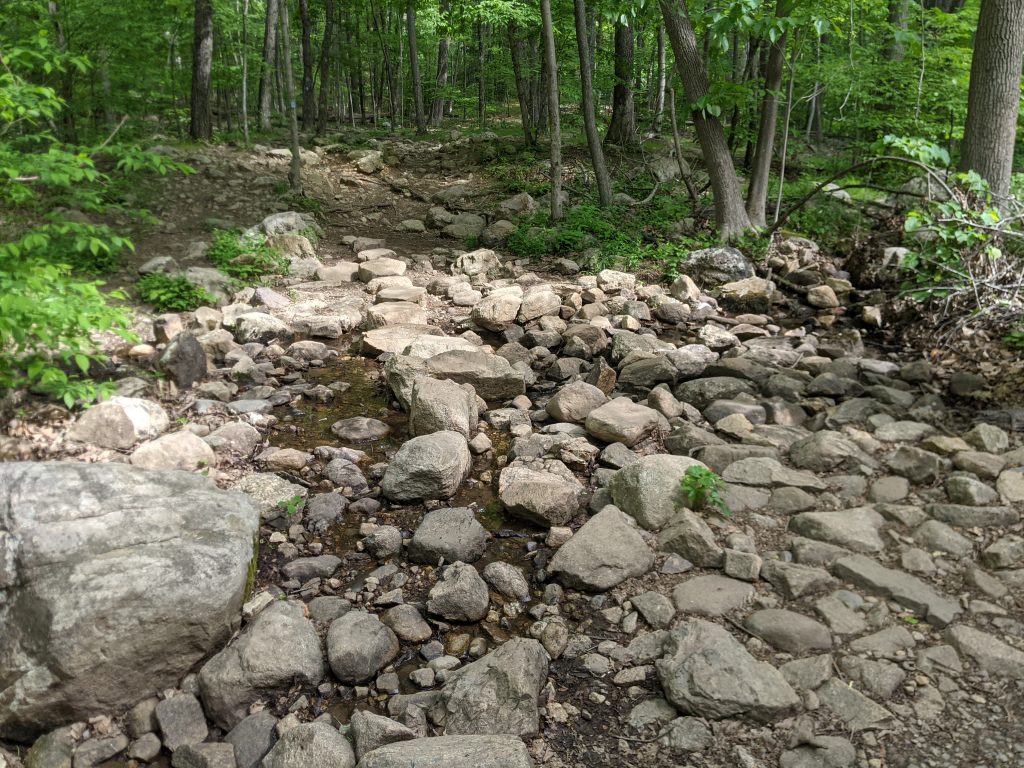 The trail to the lake is used heavily.  It’s wide in many spots, and there is plenty of evidence of its use.  I picked up lots of garbage in this area, but couldn’t begin to grab all of it.  As you hike away from the lake you will see less and less people, with the exception of up by the ruins.

The lake is gorgeous, with numerous places to sit and take a gander; including a dam I would cross at the end of the hike. 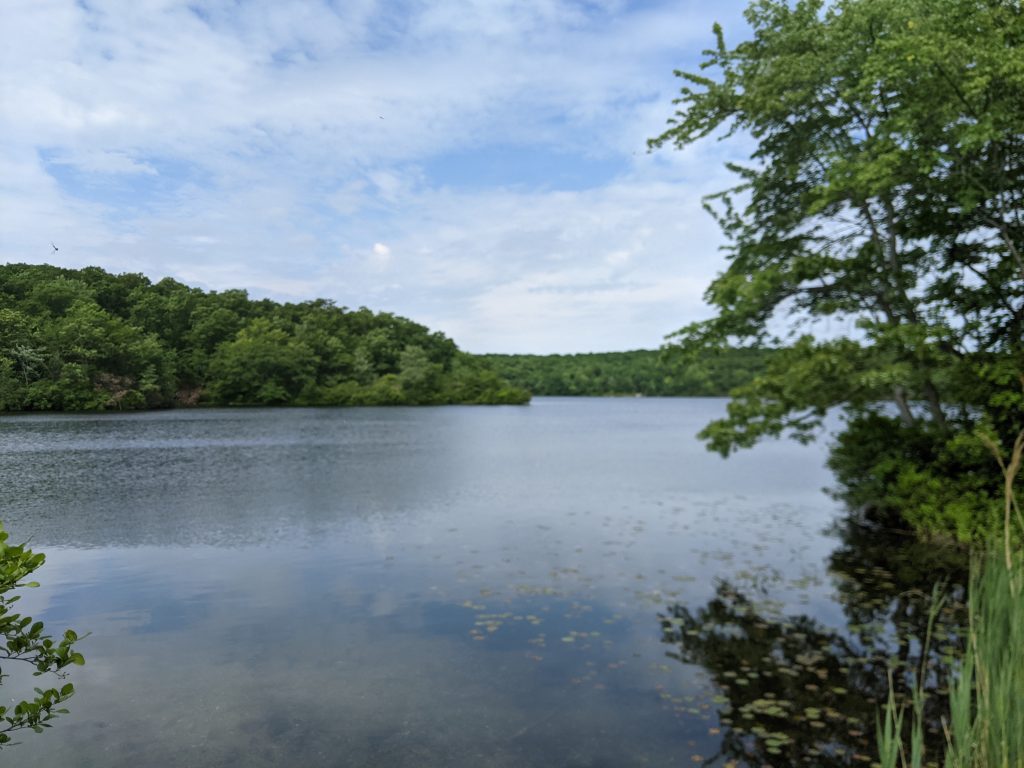 Lots of great foliage, though it was about a week early for the Mountain Laurel – I suspect next weekend will be full bloom. 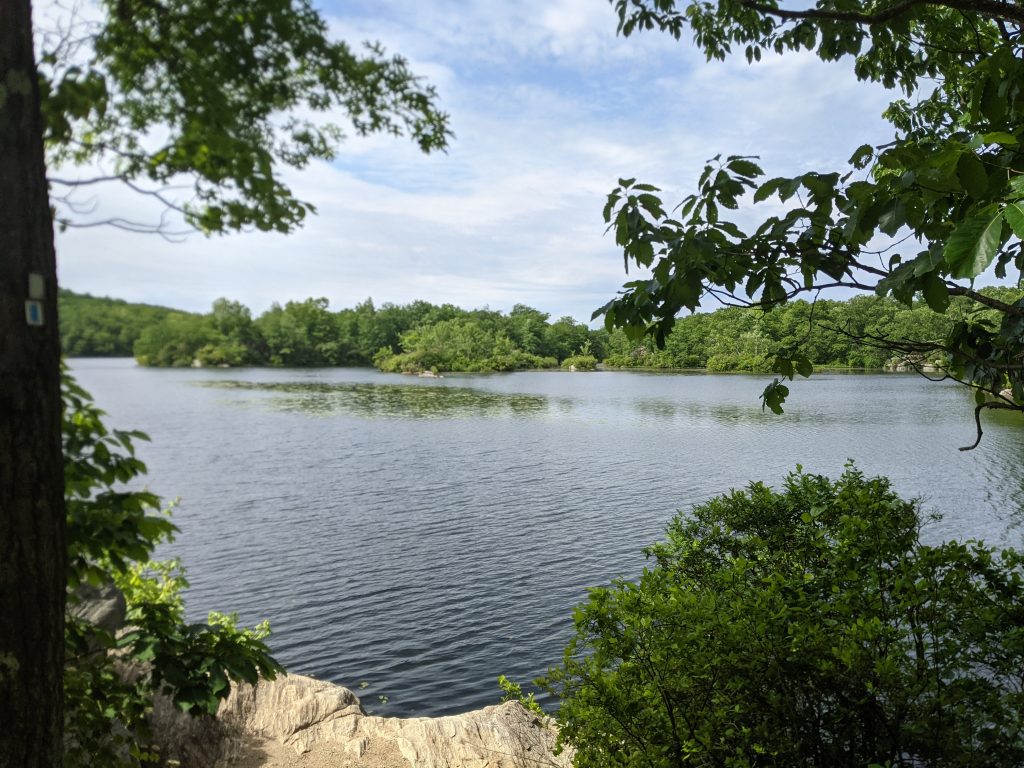 After reaching the lake, I took the Castle Loop trail up to the ruins.  This trail is popular (for the ruins) but also has the steepest grades.  I completely passed the junction with the Cannonball trail (which I would be taking later) on the way up.  There’s nothing too crazy, a lot of rocks, but, to be expected.

I came to stairs, which I hadn’t read about. 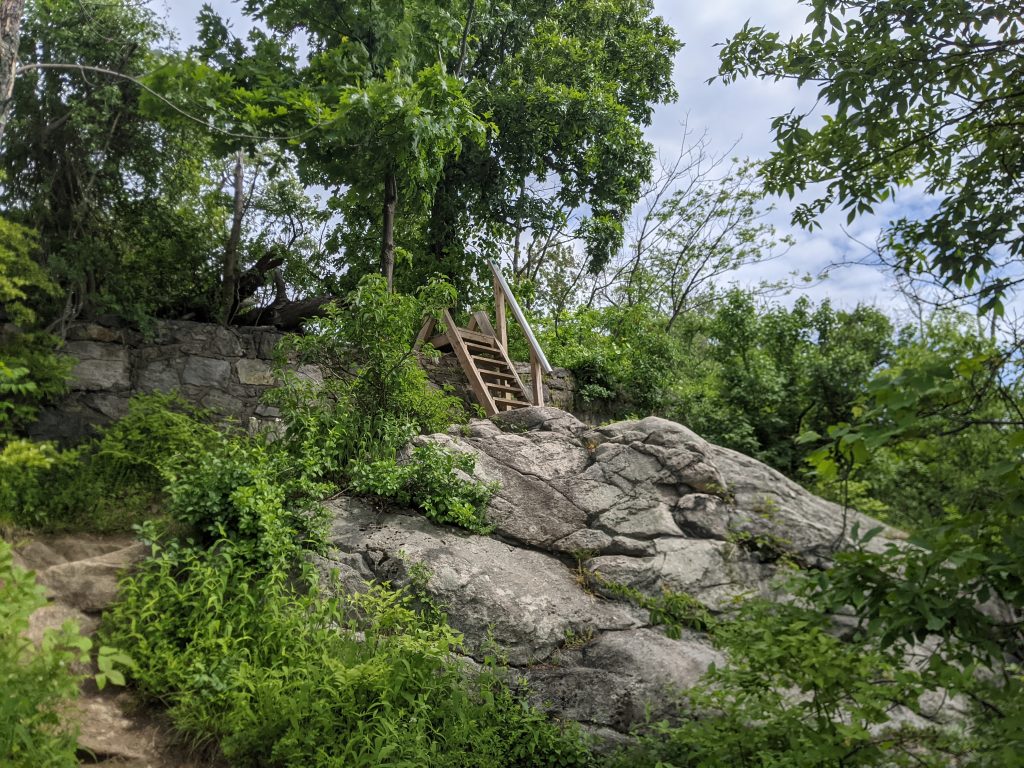 Turning around at the top of the stairs gave me this great view.

You hike through some bushes, and the ruins open up right in front of you. 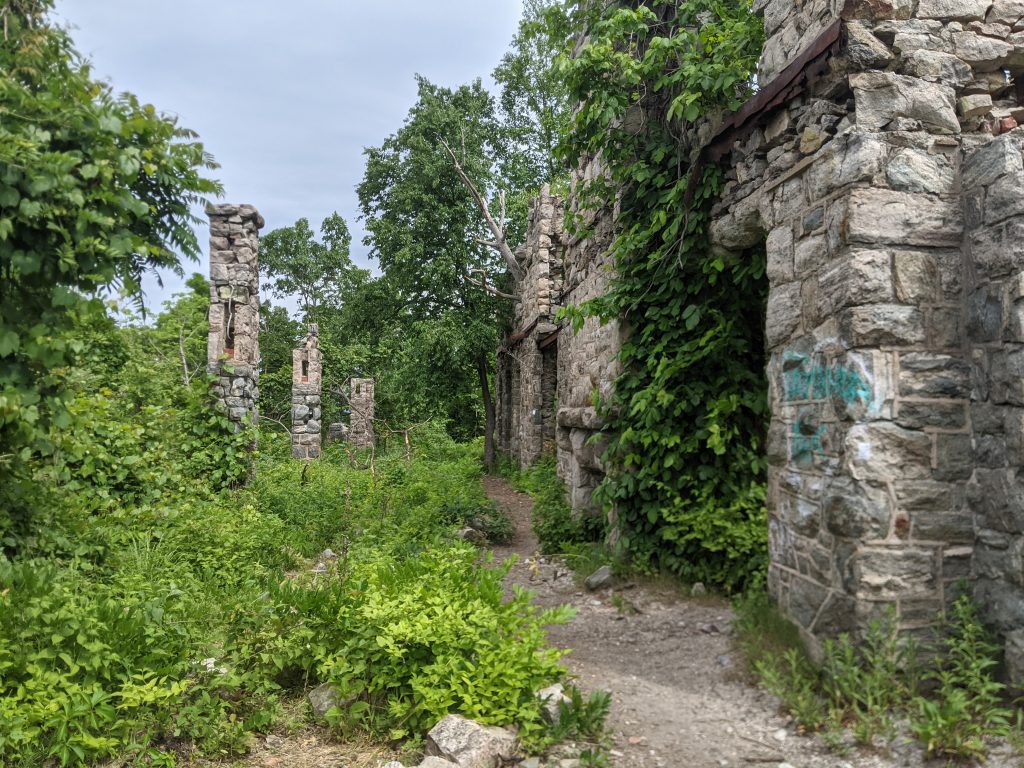 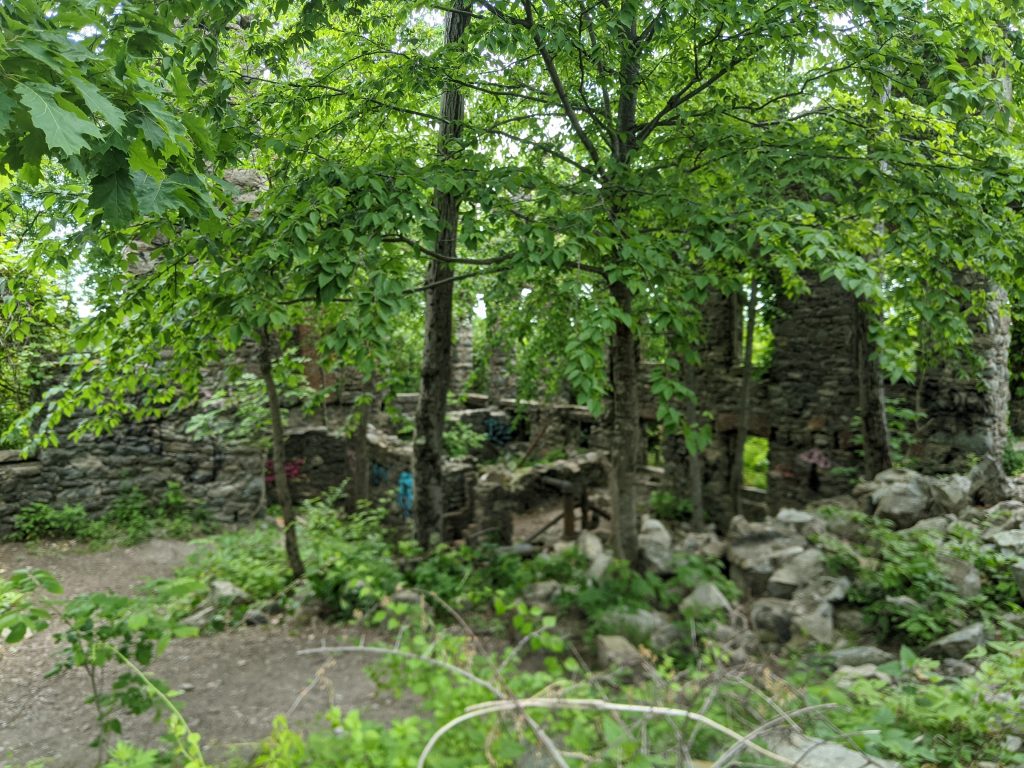 It’s really impressive what still stands.  I hiked past the ruins to see the tower and came across this view, looking west, towards Wanaque Reservoir. 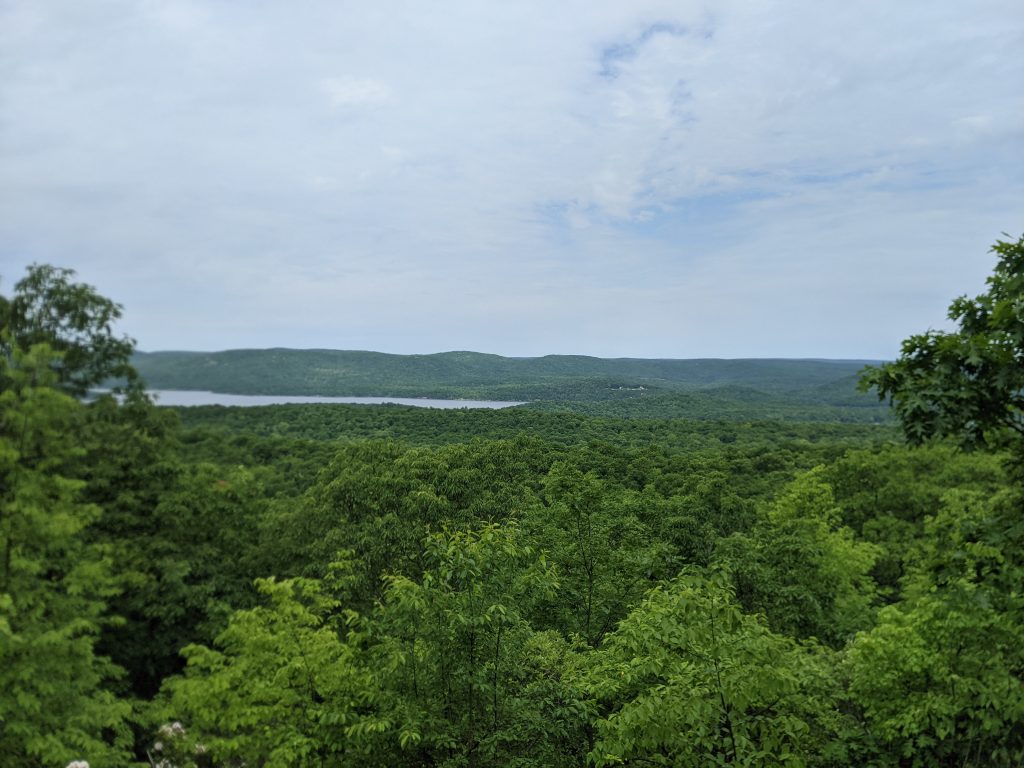 After this you pass the old pool, and shortly after that, the tower. 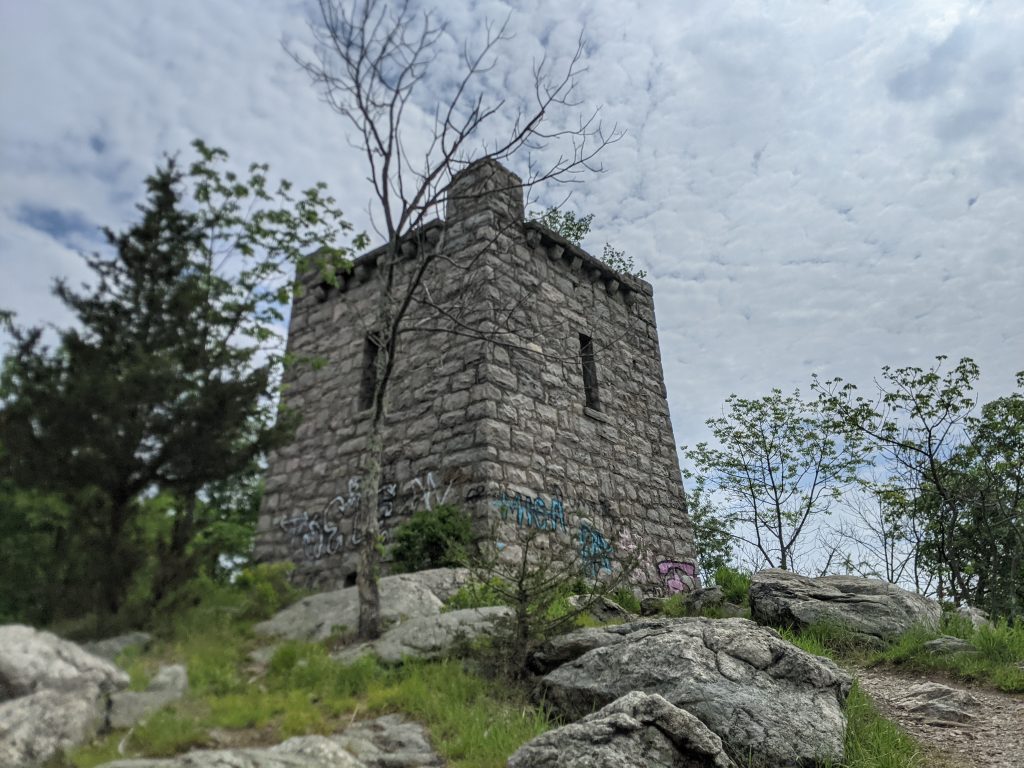 This would be the highest elevation of the hike.  It is unfortunate the amount of graffiti that exists; however, considering the castle was burned by vandals it is not surprising.  In the doorway to the tower was a solitary Red Columbine. 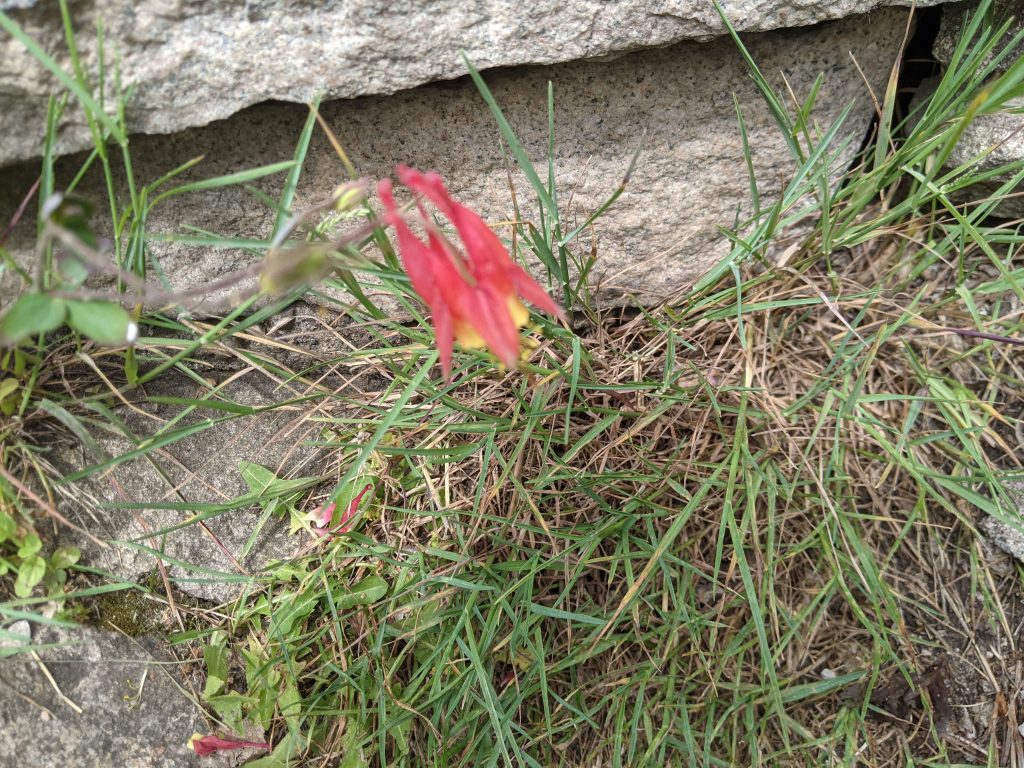 I saw lots of other critters on this hike, at one point I thought I heard a bear in the undergrowth, turns out it was only a gopher.  I almost stepped on: 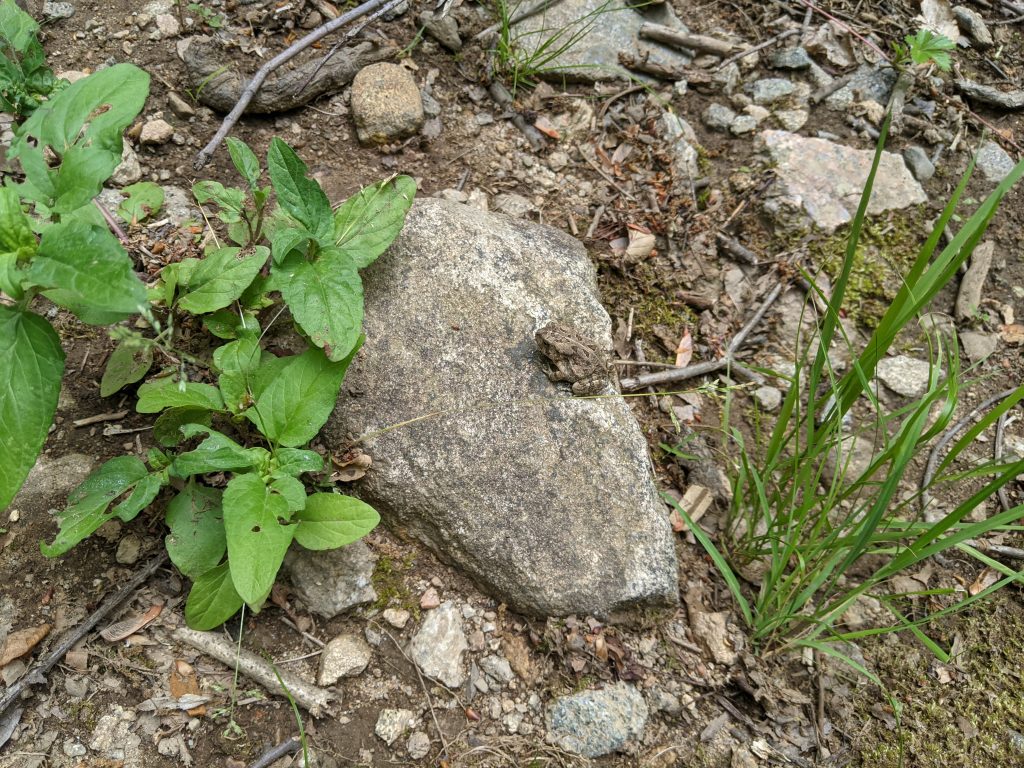 Coming down the Castle Loop, I found the junction with the  Cannonball trail, the blazes were completely missing from the other side of the tree.  All Trails has it marked, but it’s difficult to find on the way up.  There’s an area by a stream with tons of ferns. 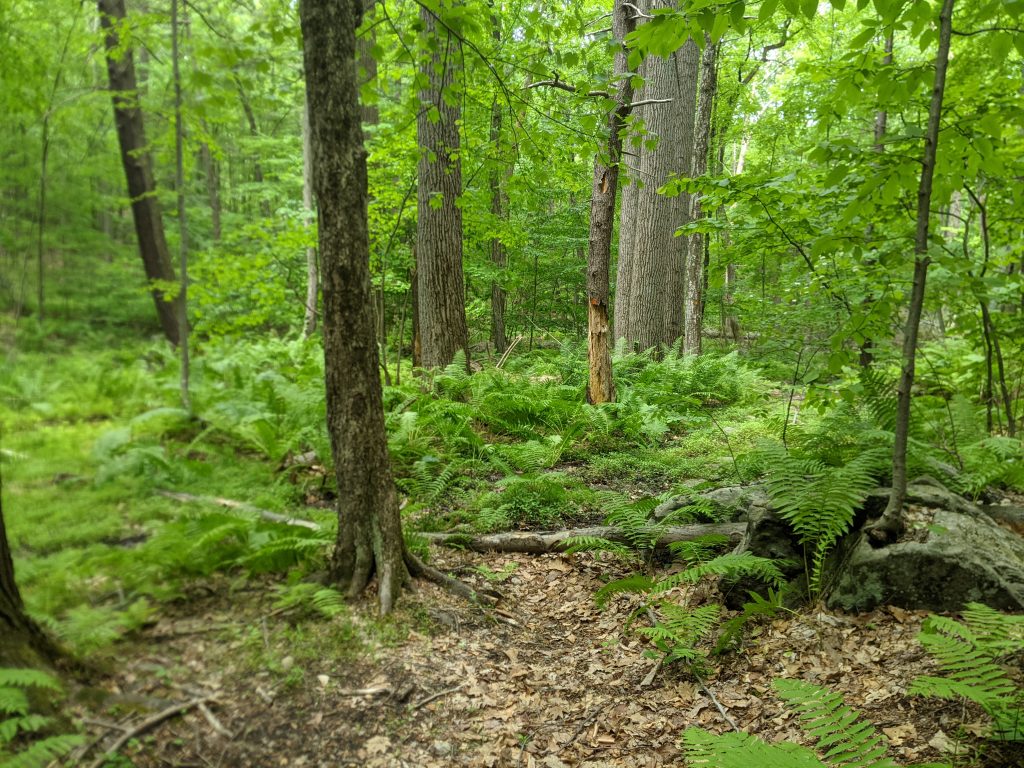 Up on the ridge that the Wanaque Ridge trail follows I was reminded of the climb on Bearfort Ridge.  There are a few spots where it is probably not more than 15 yards wide.  There are some great viewpoints, of which, I made use of for lunch. 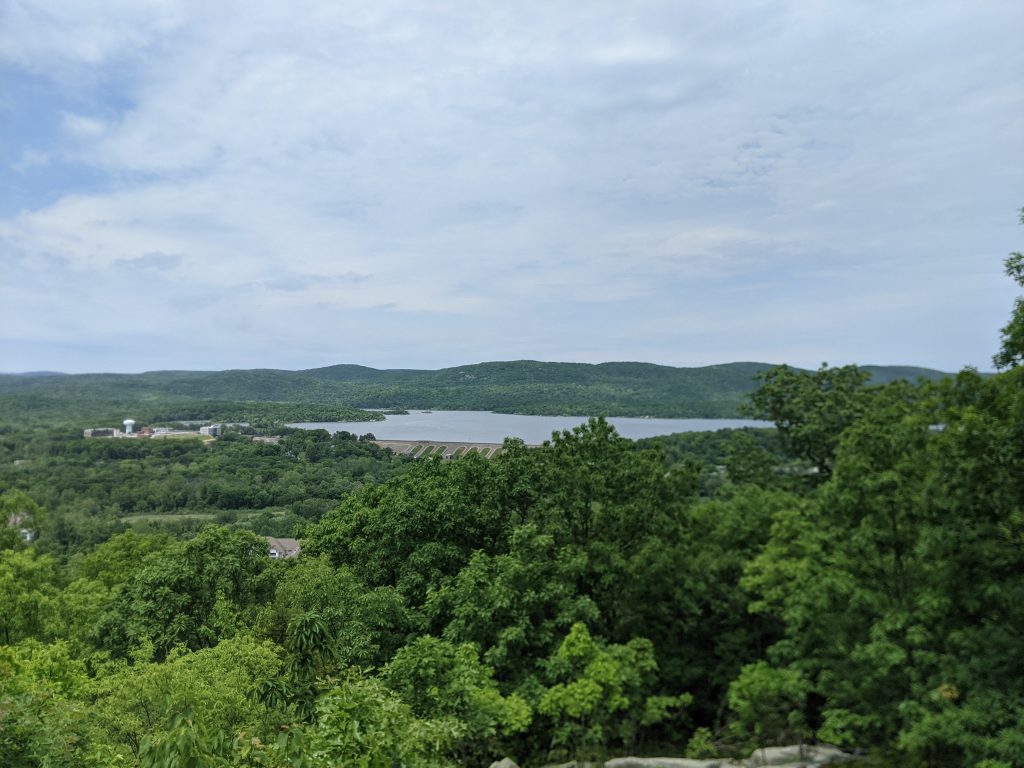 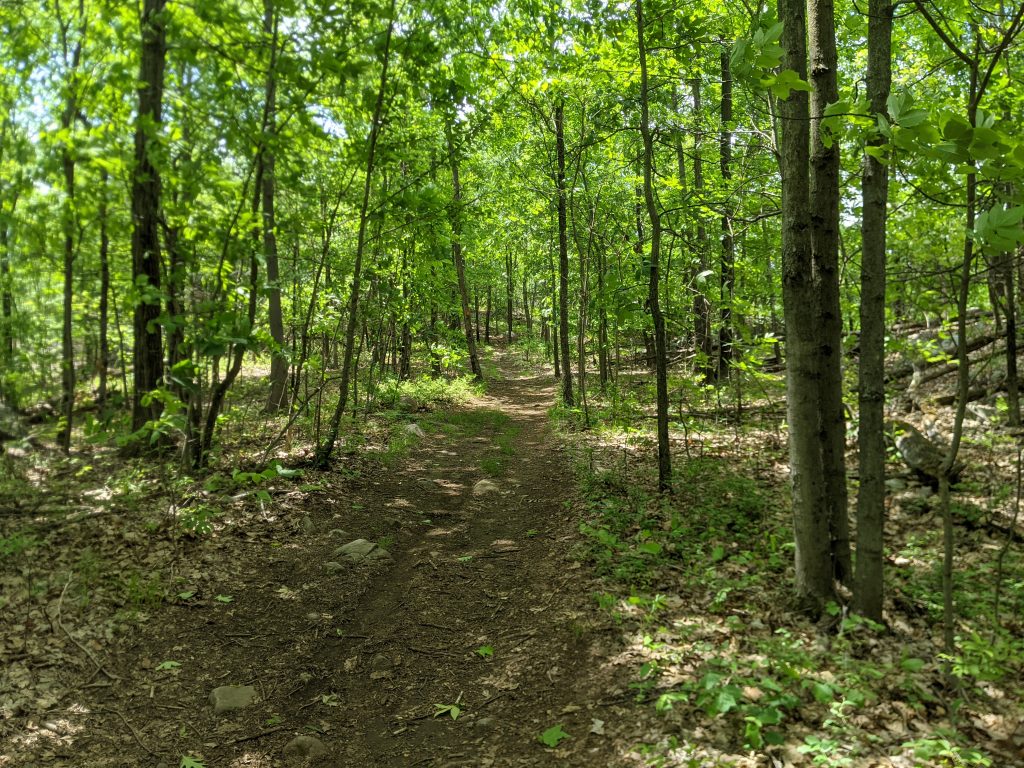 At one point a viewpoint opened up looking east towards the ruins of Van Slyke castle. 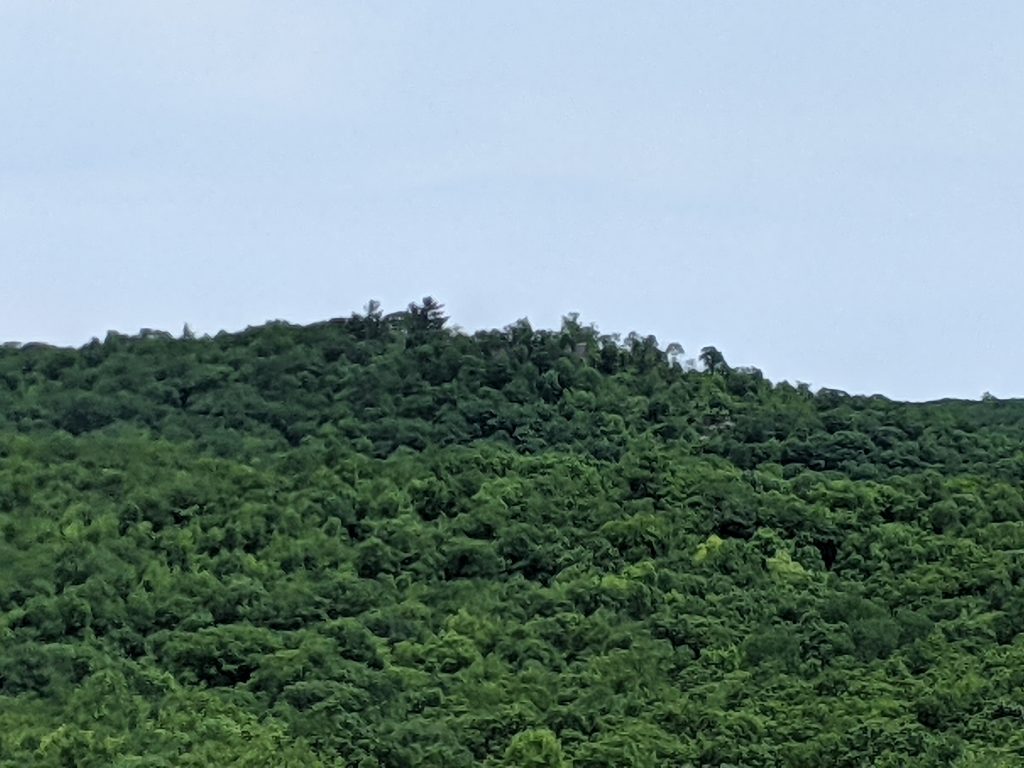 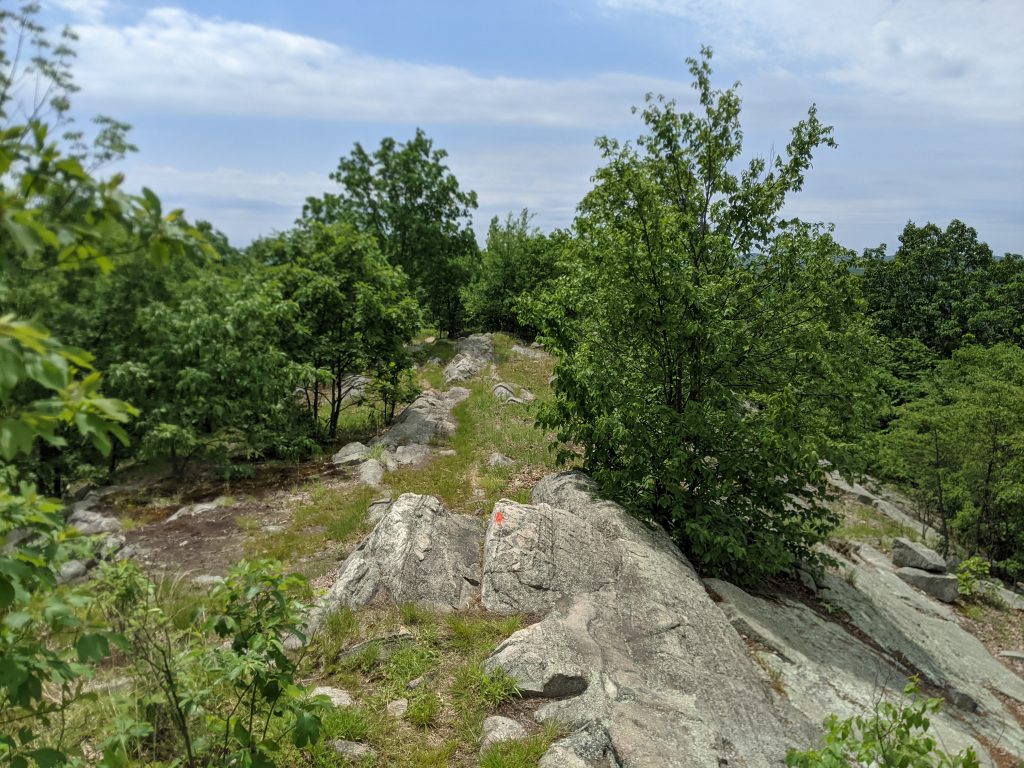 Clouds started to roll in on the way down from the ridge and I could feel it starting to cool off.  Keep the map handy because there are some areas where there are unmarked trails – it almost looks like the original trail has been re-routed.  After crossing the pipeline cut for the second time, the trail ascends on stairs, thank the trail maintainers for these. 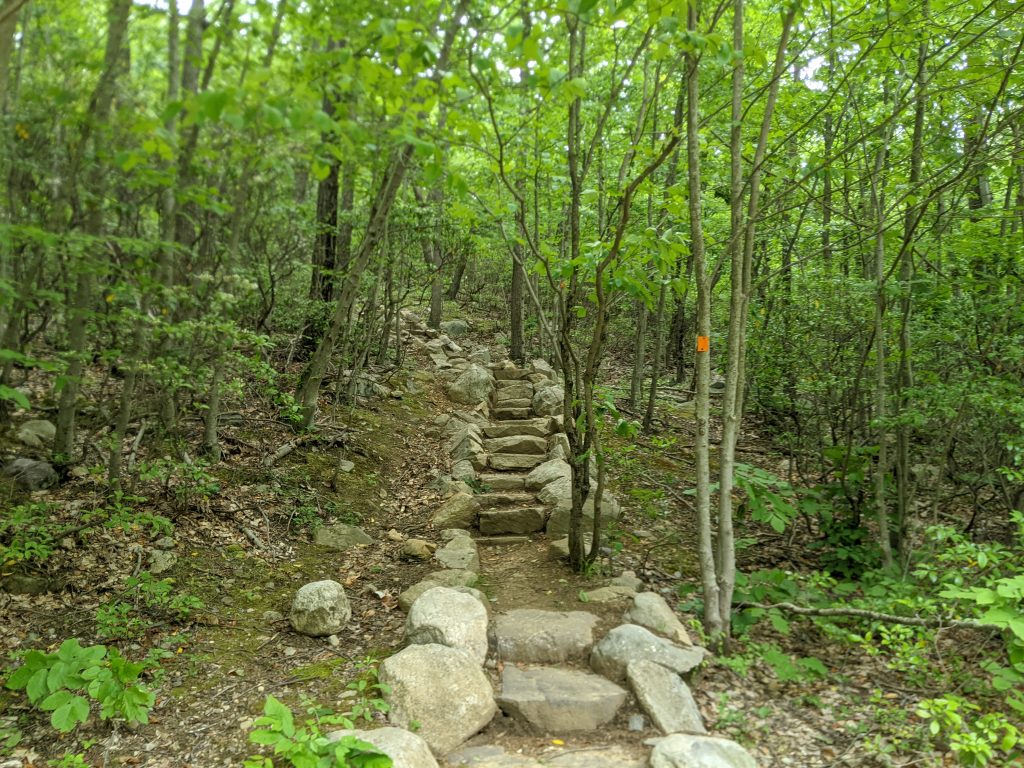 This was the perfect hike for the day, and given that I just made it out before the rain I was even happier.  There are trails in the northern part of the forest which I will have to come back and explore.  As I was there on a Friday, the lot was not too crowded with cars, but I bet this gets packed on weekends. 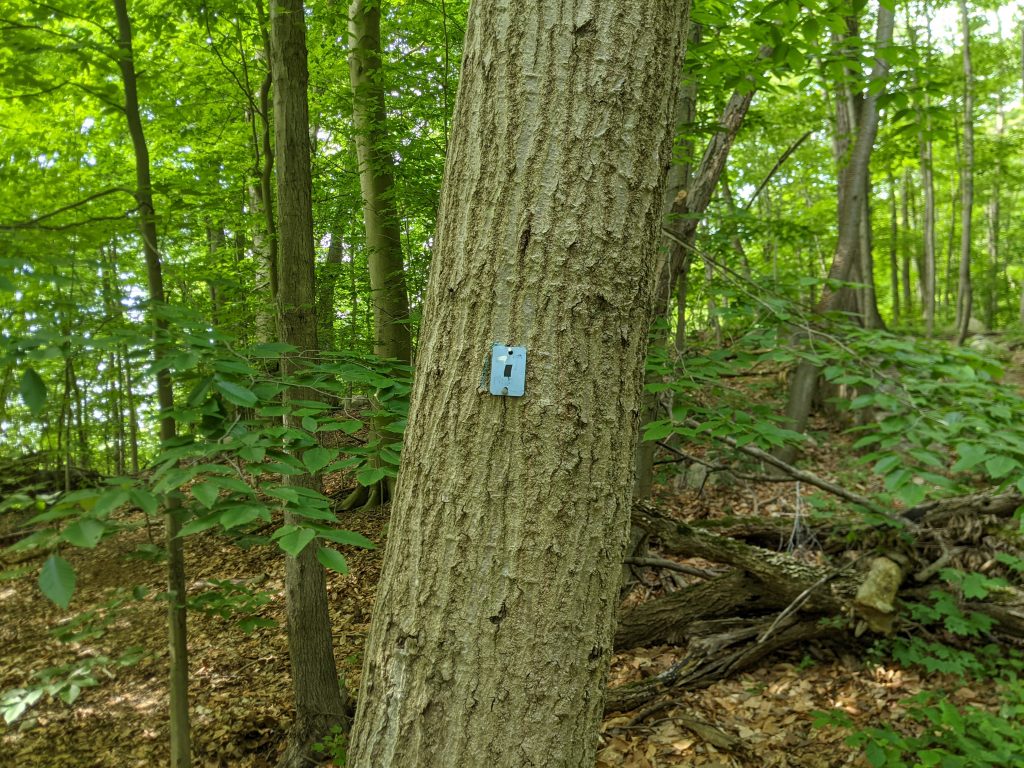 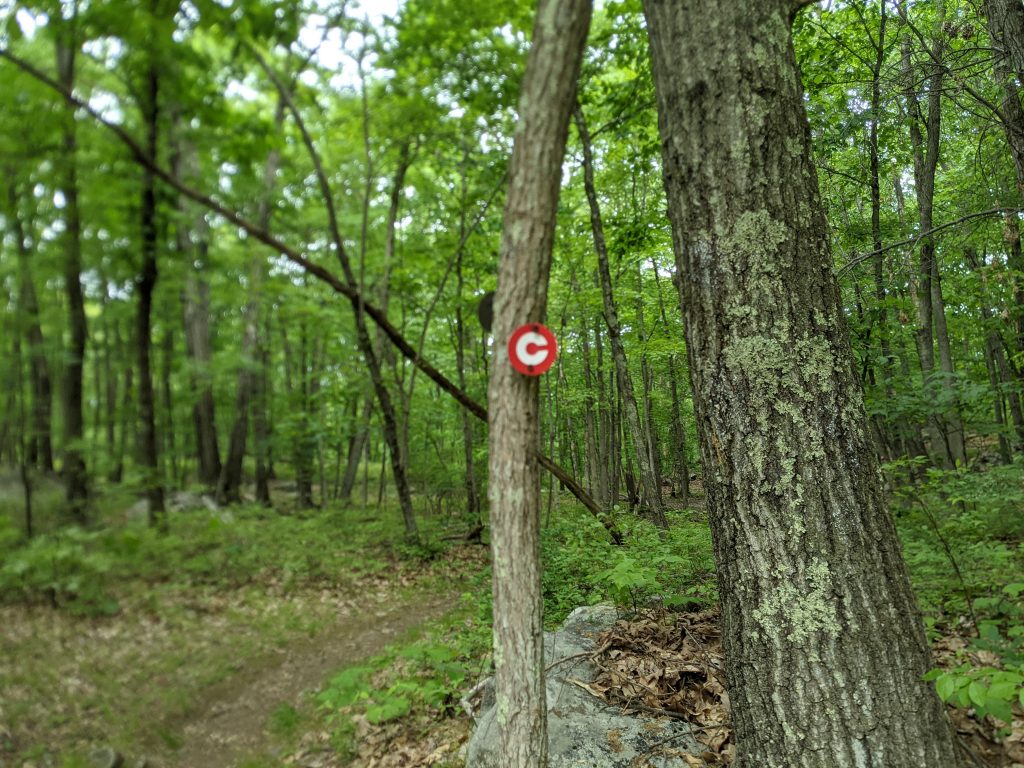 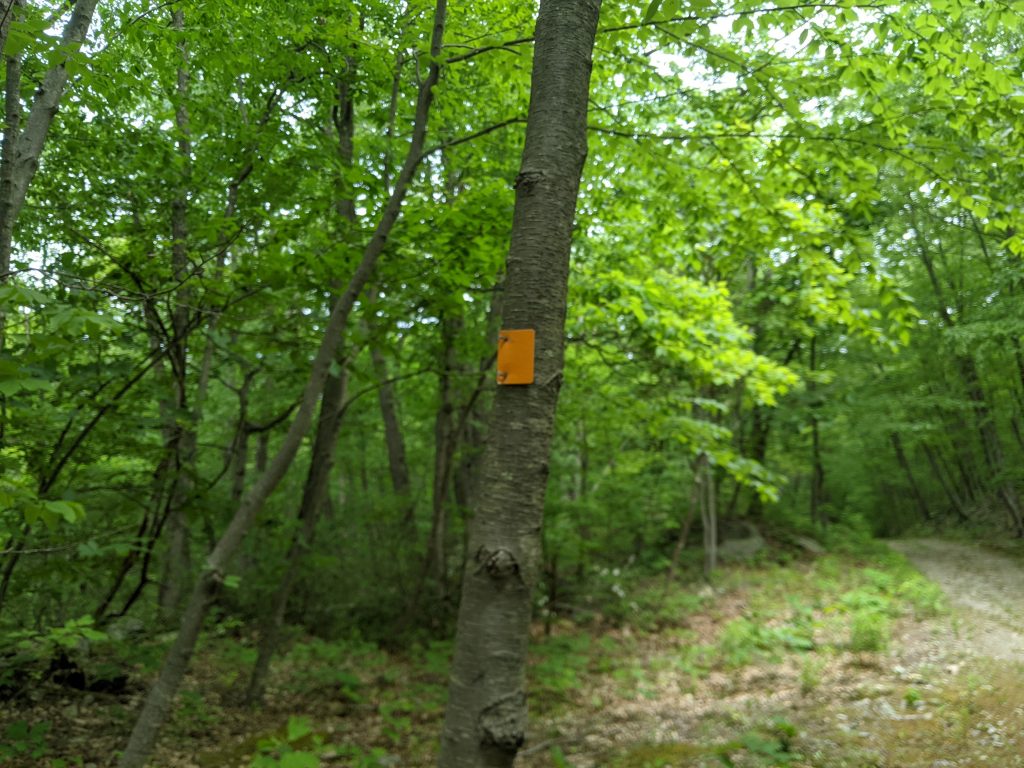 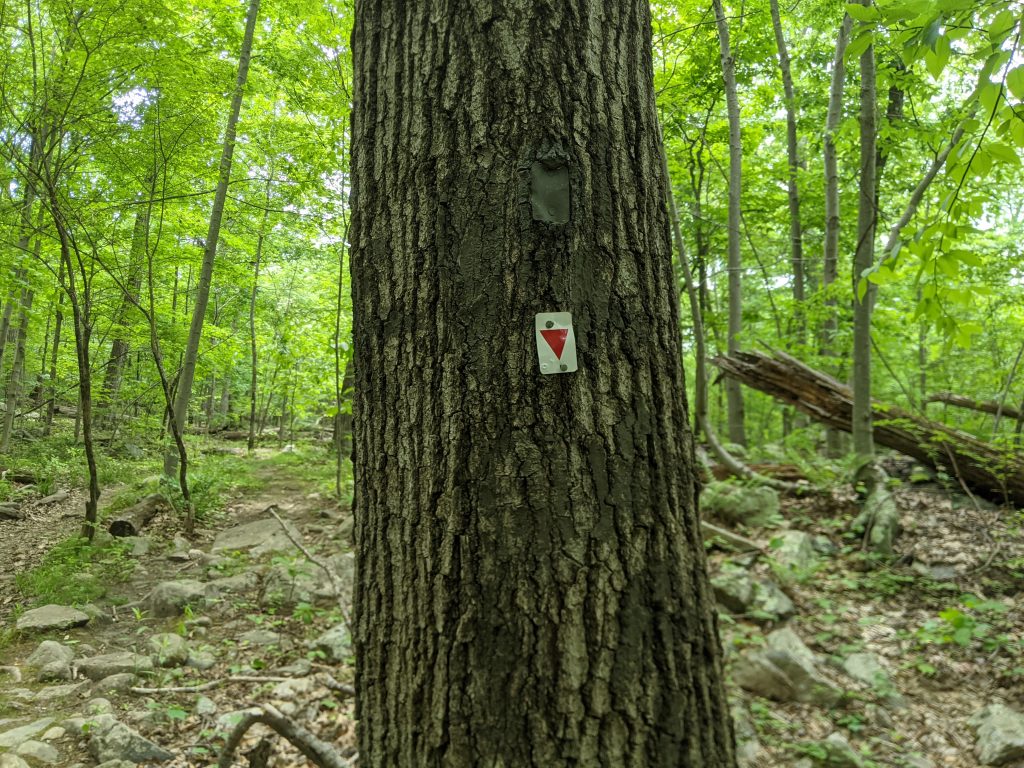 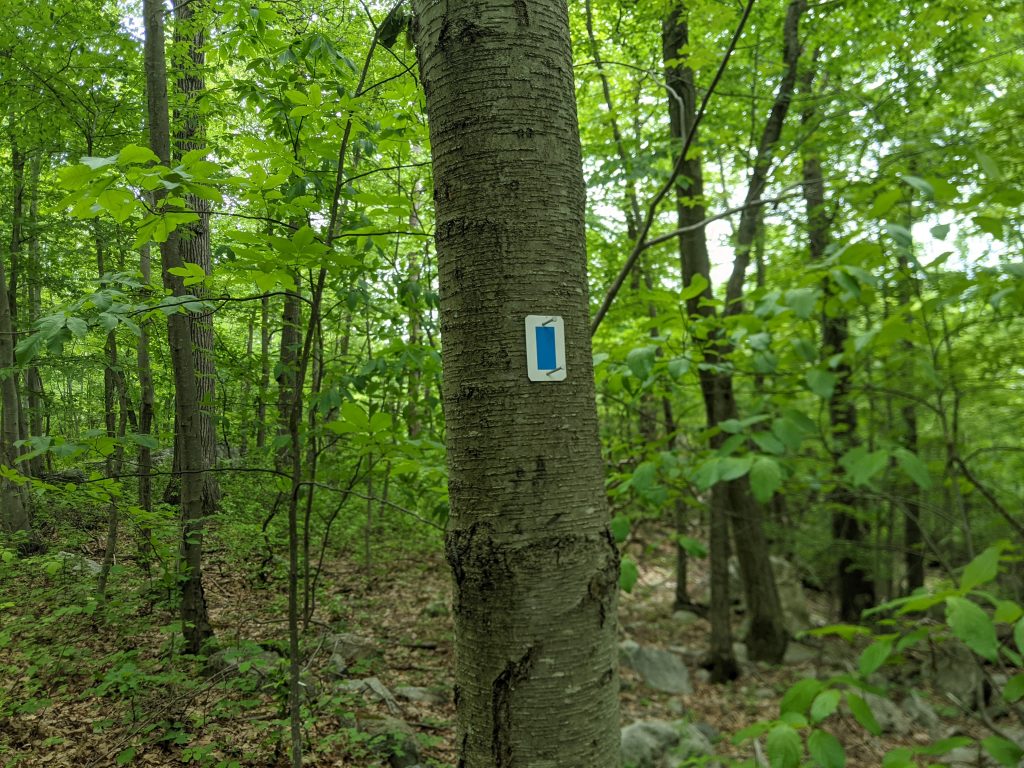