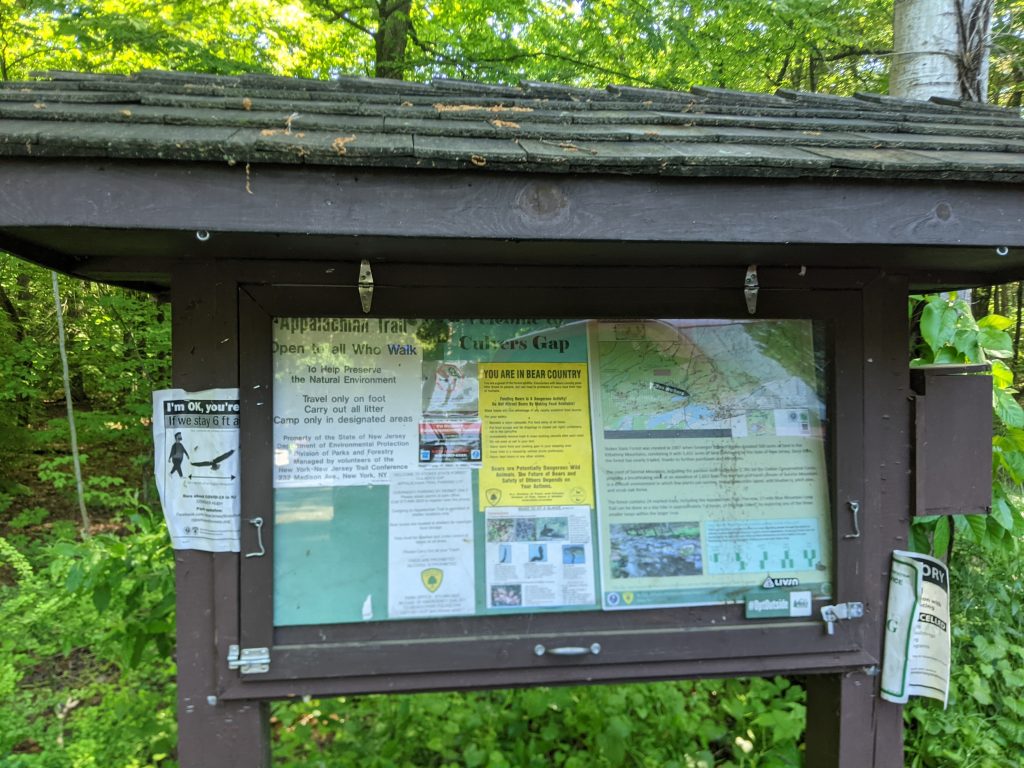 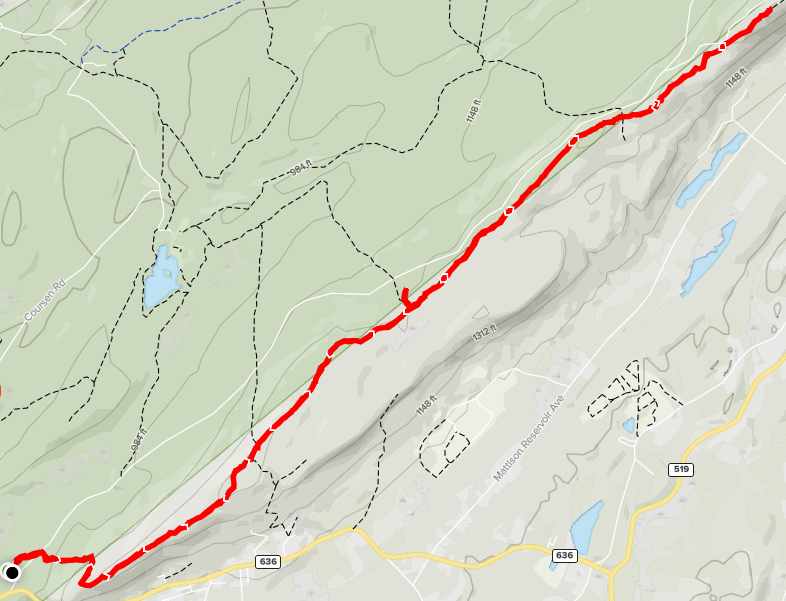 The day before this hike we received a storm that was biblical in nature.  It wasn’t long, but it was hard with lots of cloud to ground lightning.  I didn’t think much of it until I got to the trailhead parking, and wondered if I was going to be in for a lot of mud.  I needn’t have worried; while there were a couple of spots that were muddy, it was mostly soft dirt – which made walking extremely pleasant.  Rocks were wet; but with temperatures reaching into the 90s, by lunchtime most everything was dry.

This picture doesn’t really capture what the forest looked like.  It was early in the morning, with the sun out, the leaves were still wet, and it sparkled everywhere. 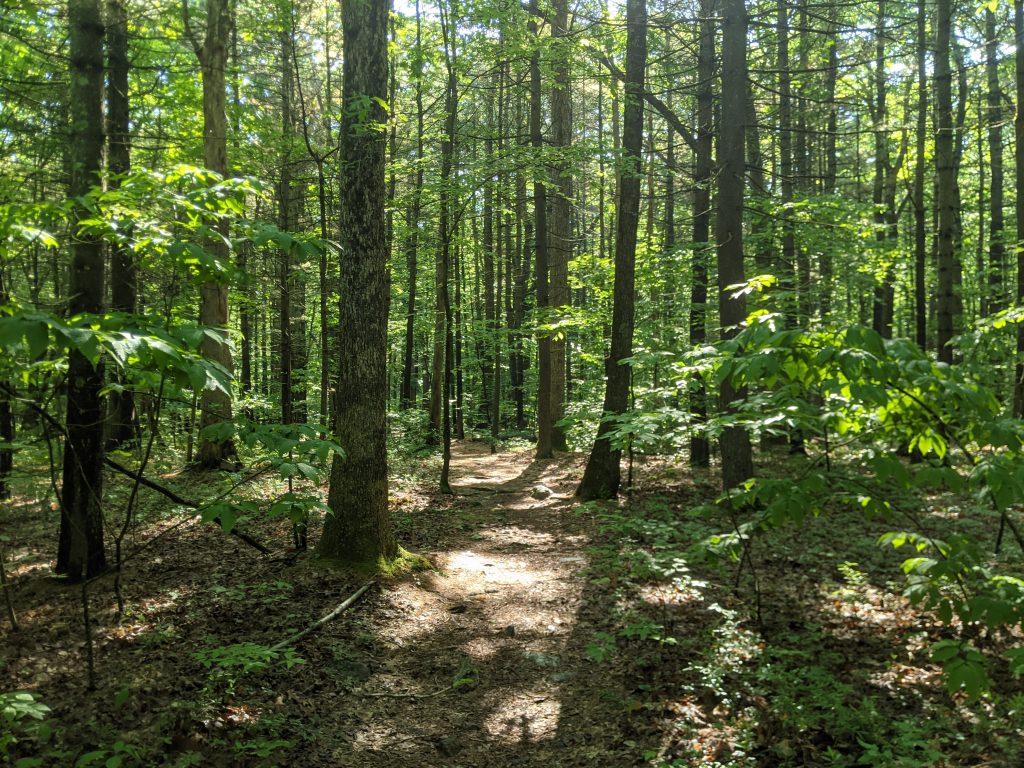 From the Culver’s Gap trailhead parking lot, there is a steep climb to get up onto the ridge.

There were lots of these guys scampering around, apparently enjoying the moist forest floor.  Once I reached the ridge, I saw less and less of them. 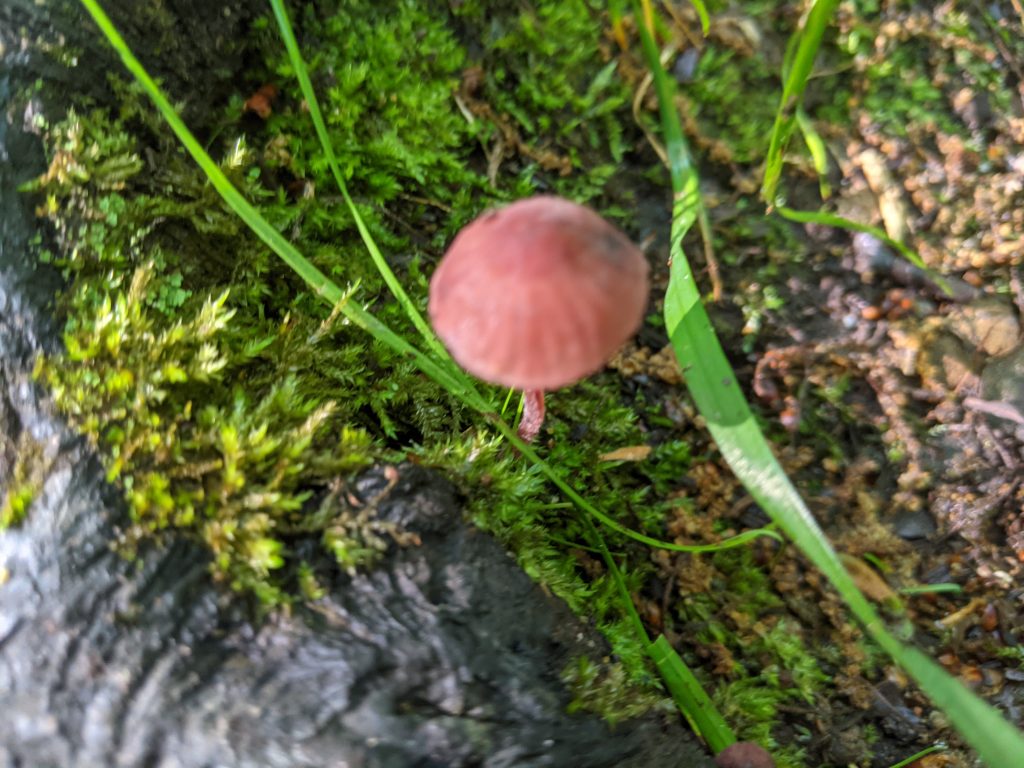 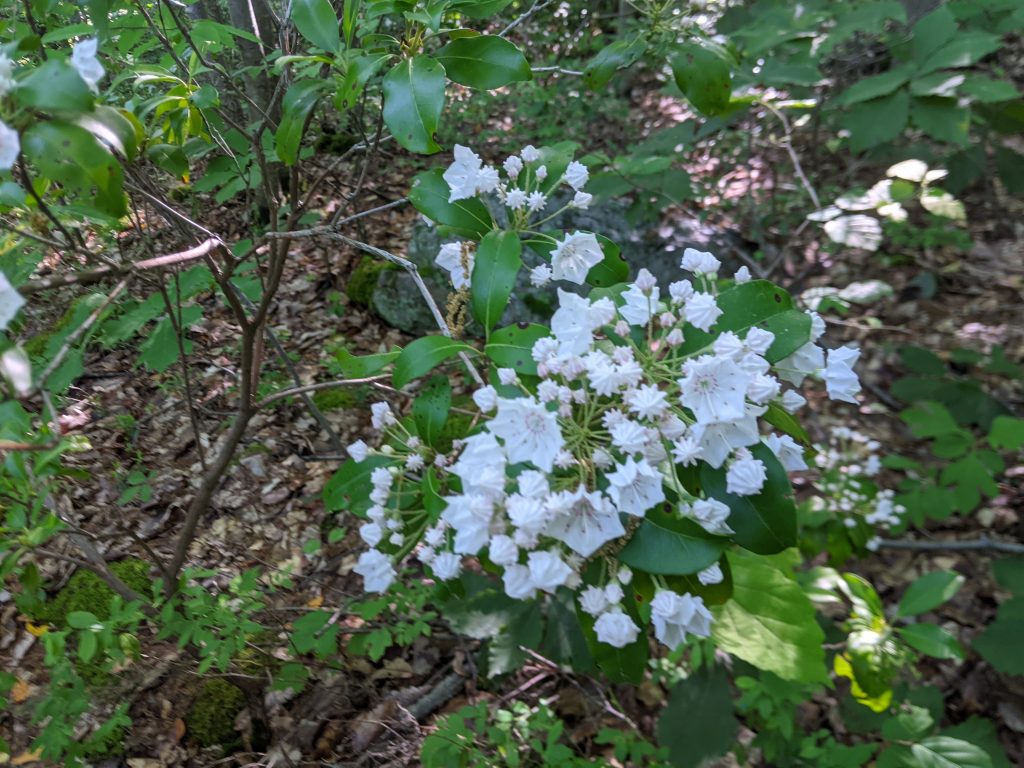 Once on the ridge there is a great view southwest. 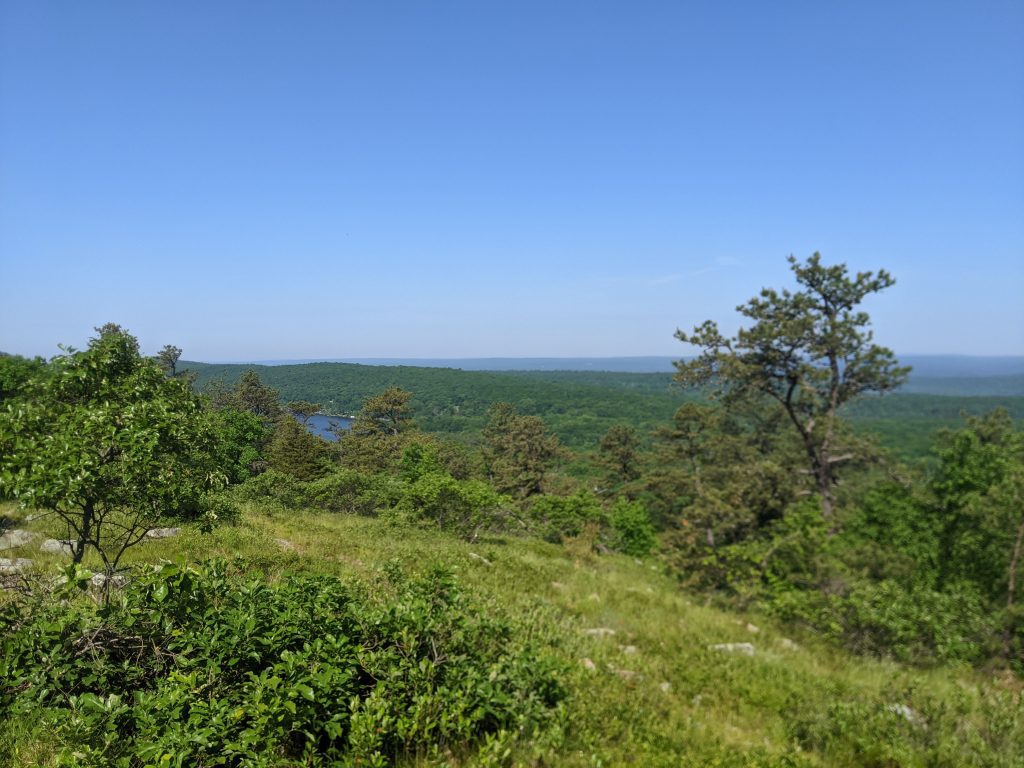 The ridge is pleasant, with a few ascents and descents, but nothing serious until you come to Sunrise Mountain.  Note,  Sunrise Mountain  is the second highest mountain in New Jersey.  (Sort by elevation.)   The Appalachian trail on the ridge makes for a great walk; I did see a bunch of section hikers during this time. 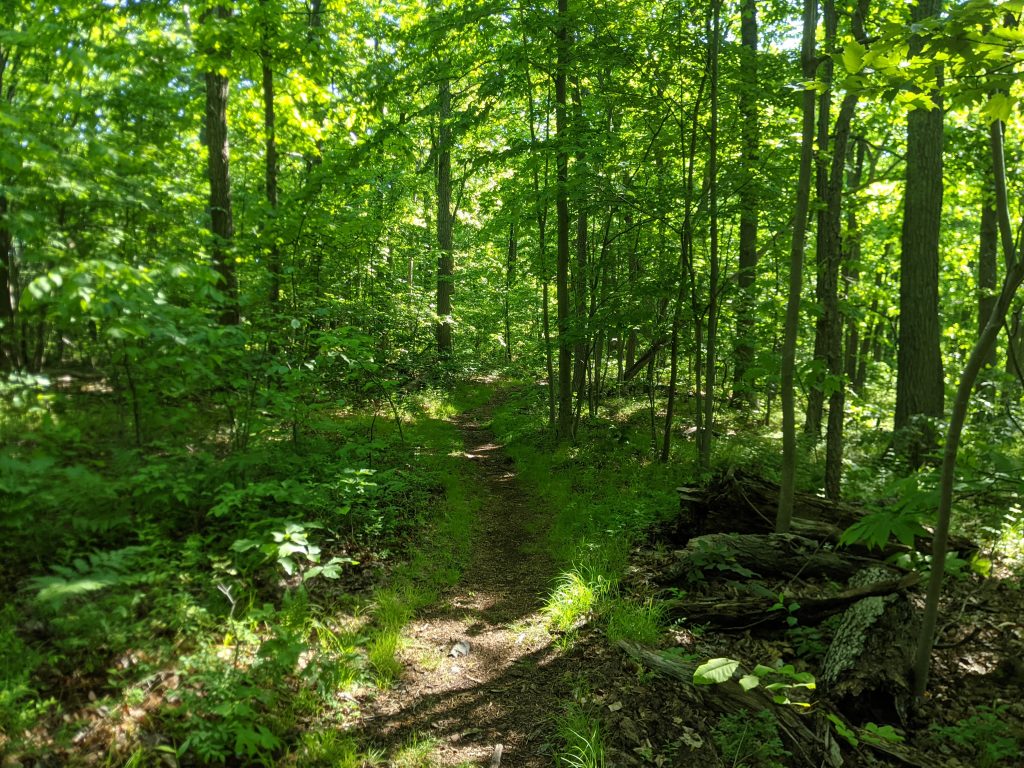 The first point of interest you will come to is the Culver’s Gap Lookout Tower, originally known as the Normanook Fire Tower.  You can climb the stairs, but unless it’s manned you can’t get into the top.  I didn’t even consider it. 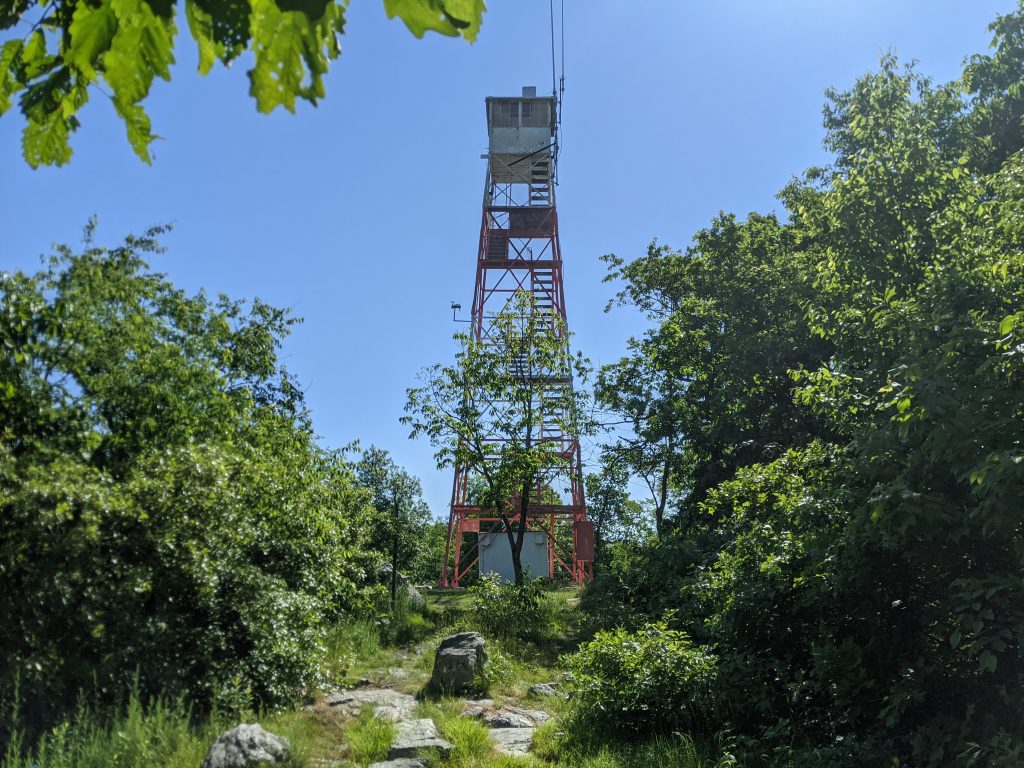 There’s a great view out towards Blue Mountain. 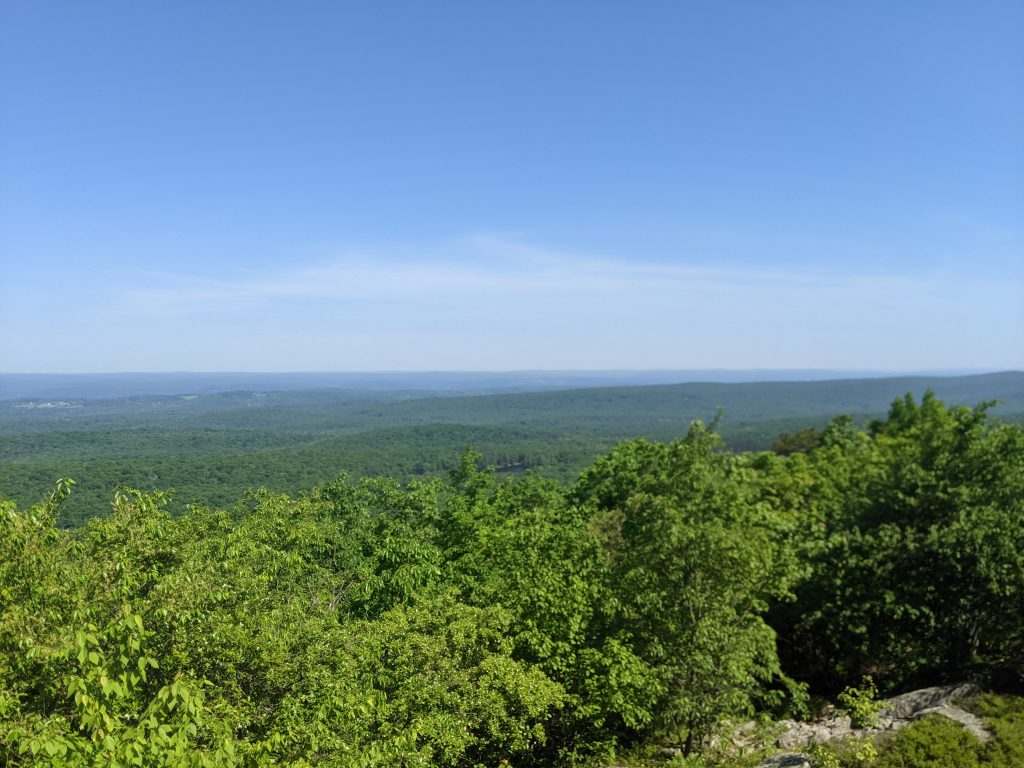 There are three trail junctions before Sunrise Mountain, and plenty of views, some probably better after the foliage has fallen.  There are a couple of streams to rock hop, and at least one section with small boardwalks. 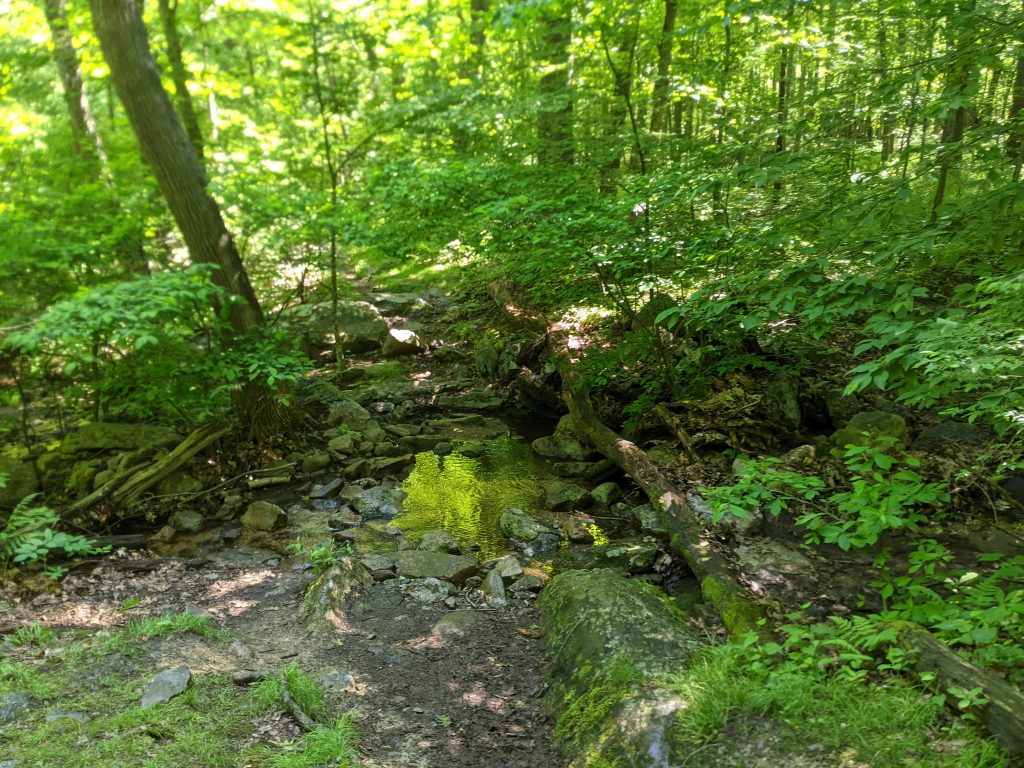 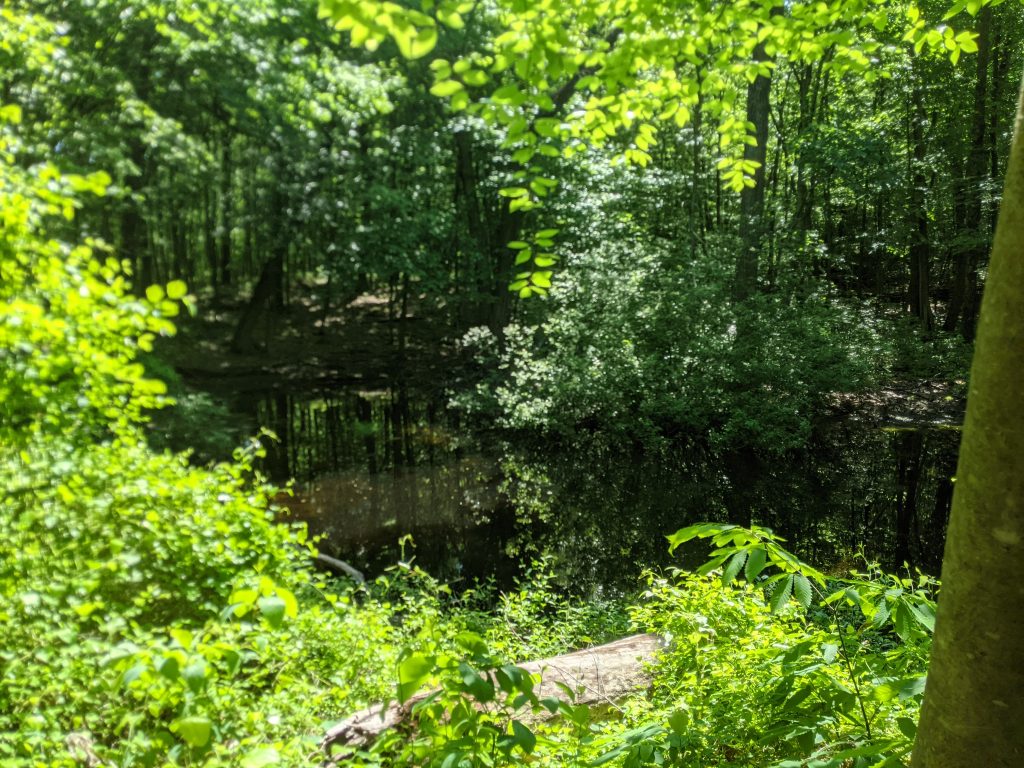 Throughout the whole trail I encountered lots of millipedes; way more than I am accustomed to seeing. 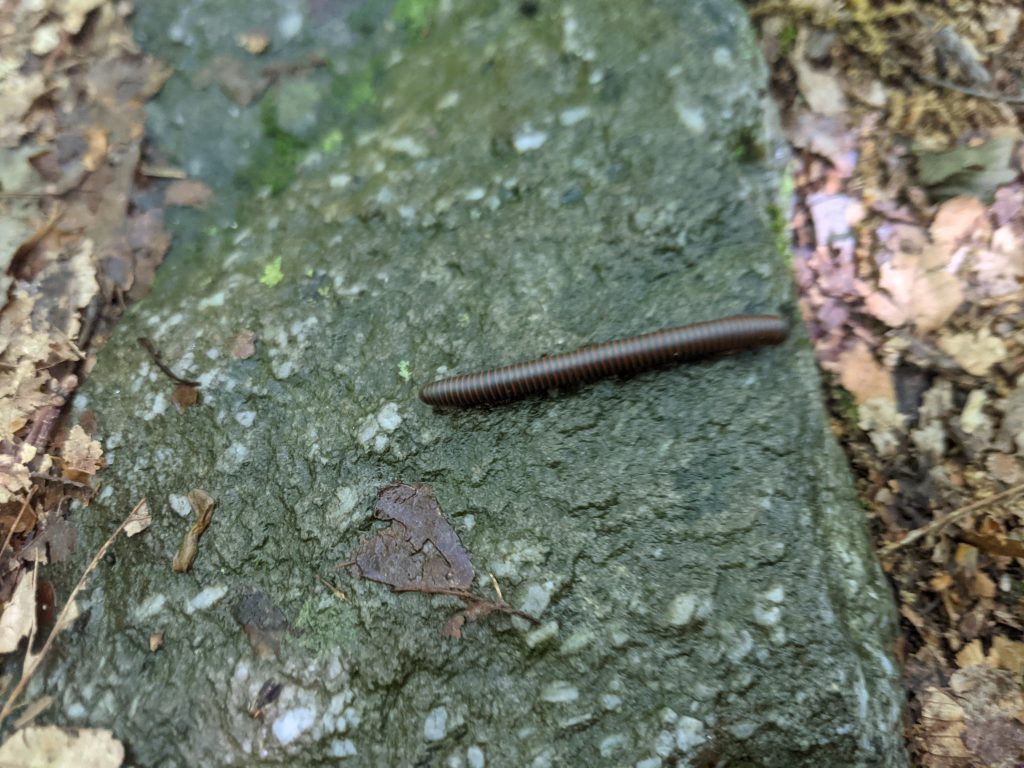 After a small rock scramble you will come to the top of Sunrise Mountain.  A small concrete cairn holds the summit disc. 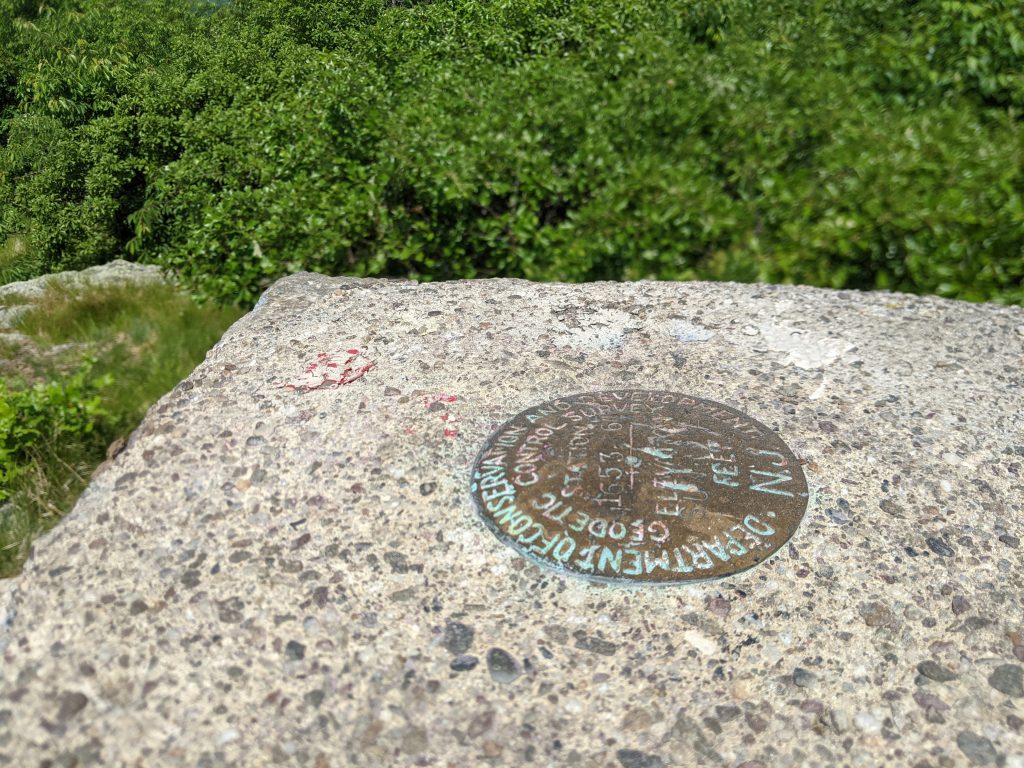 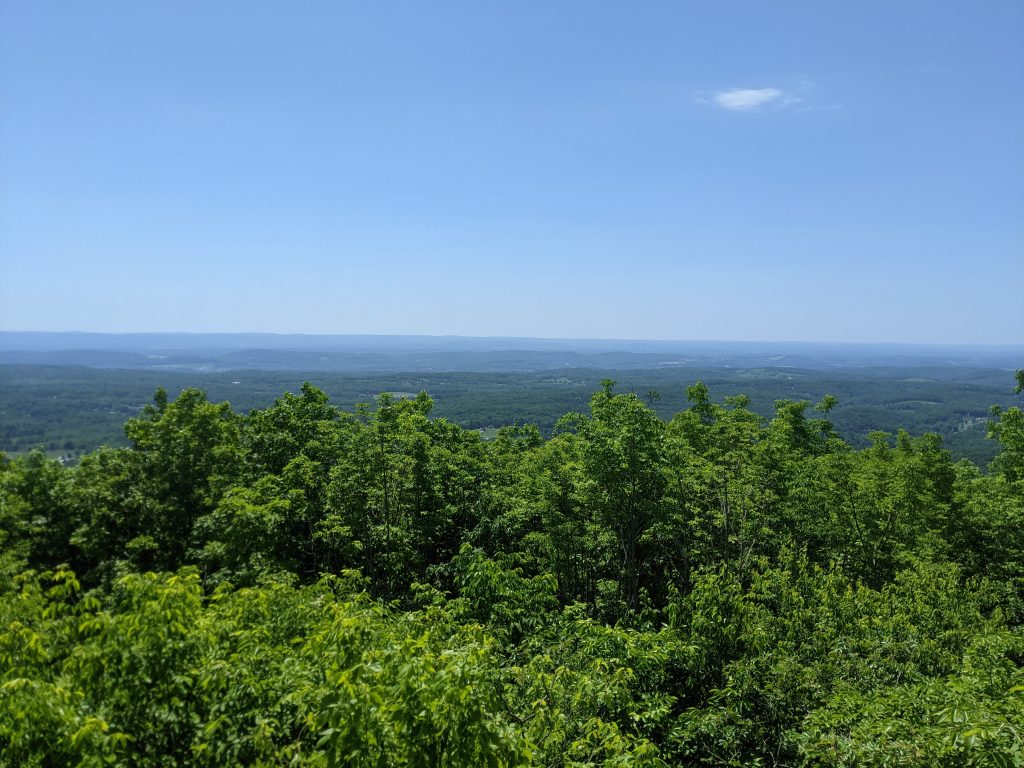 It was hot at this time, and I had lunch on a bench in the pavilion. 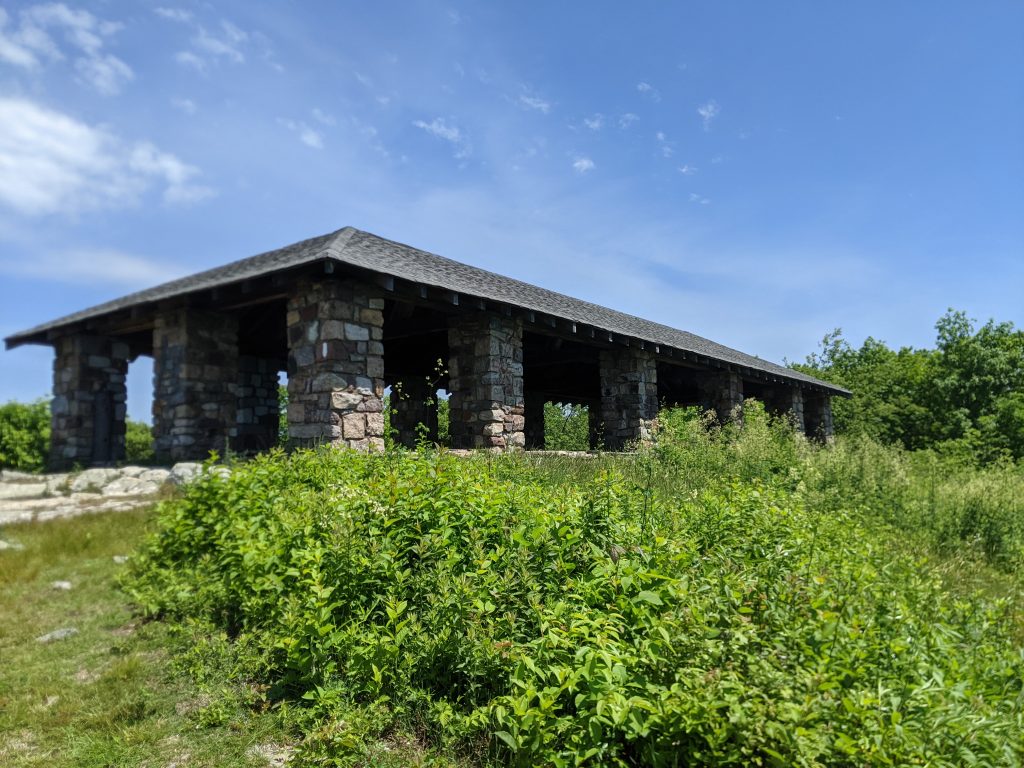 While there, I met a section hiker who was hiking the Appalachian trail in New Jersey.  He mentioned that he was in a shelter the night before when the storm hit, but he heard from hikers that were still on the ridge.  They said it was more than frightening.

The walk back was pretty uneventful other than it was oppressively hot.

As this was an out and back, I was essentially retracing my steps.  On the way TO Sunrise Mountain I passed a small spur trail, but I couldn’t see where it led.  On the way back, I decided to investigate.  It looked like it led to a viewpoint on the NY/NJ Trail conference map.  Sure enough, it did.  Probably the best view of the day.  I apologize for the picture, it was in the 90s at the time, and I was beat. 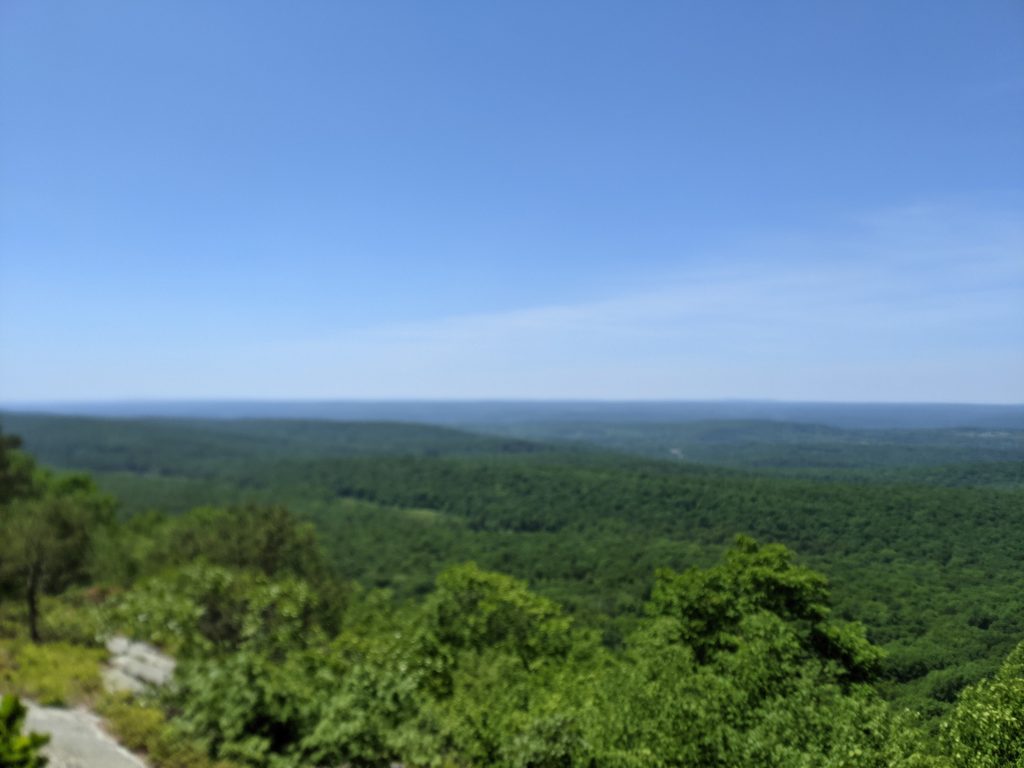 I hadn’t been in Stokes State Forest before, and I think the next time I come I may hike south on the Appalachian Trail.  Or, I may backpack to the shelter for a short trip.  The lot was packed when I arrived at 8:45, though there were still spots available.  When I returned to my car, the lot was fairly empty.