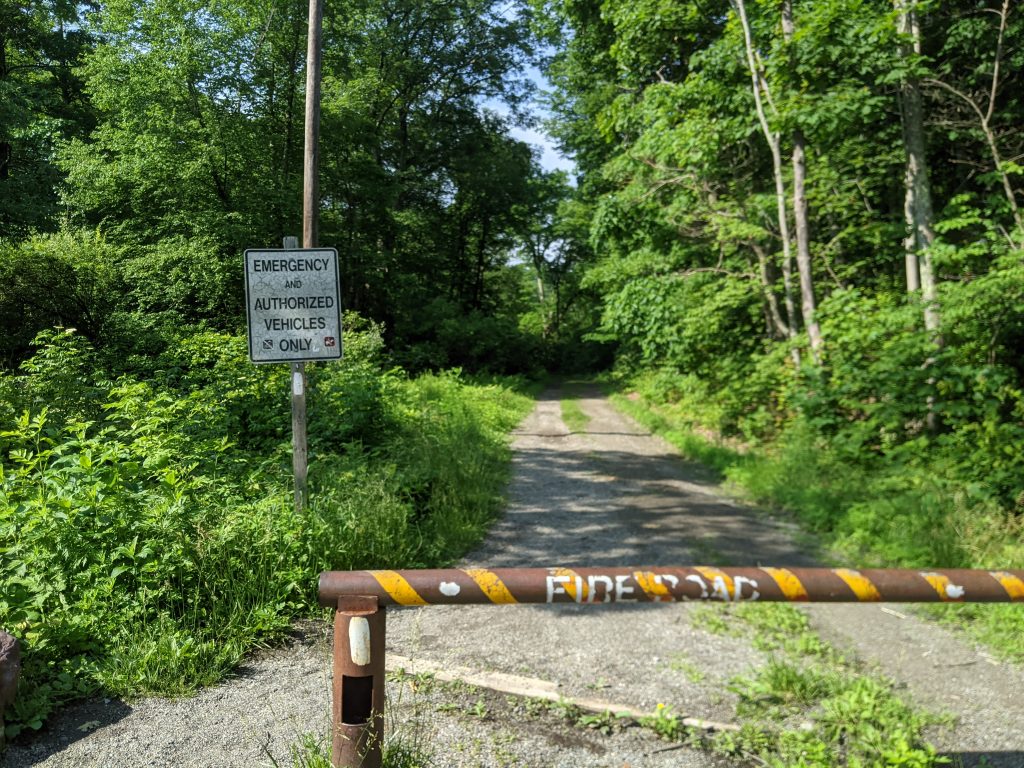 Trail Map:  Here, but I used number 121 from the NY NJ Tail Conference 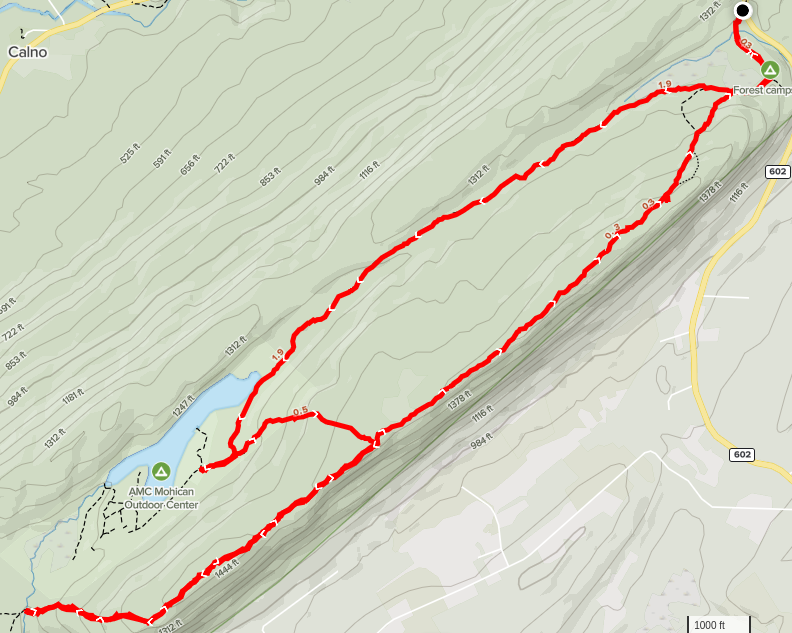 It was supposed to rain later in the day, I was prepared for it.  It didn’t.  I wish it did.  It was oppressively hot and humid.  Heat and humidity lead to bad decision making, and I got greedy for miles.

Note:  I parked here, a pullout on Millbrook Road.  This was not the easiest to find, and bear in mind (with  Verizon) there is very little cell service in this area.  That’s kind of my point, I want to get away from civilization, but this was the first time that I had NO service.  There are a couple of pullouts on Millbrook Road, however, only the pullout for the Catfish Fire Tower has a gate (that I saw.)  If the pullout looks like the picture at the top, you’ll know you are at the coordinates I’ve linked to.  Google Maps in Satellite view shows the pullout, and some overflow pullouts.  (Don’t rely on your phone to look at the maps when driving around.) I was the second car at the trailhead, the first left as I was getting ready; and when I returned, there were two others.

This hike was classified Bon Jovi, it was Slippery When Wet.  Rain happened in early morning, and all rocks were extra slippery.  Fortunately there were no scrambles; there were plenty of steep sections, and it’s the AT, there are plenty of rocks.  I slipped more on this hike then ever before – I thanked my trekking poles and vowed to offer a sacrifice later.

From the pullout, walk down the woods road.  You’ll come to where the Appalachian Trail goes left (and to the tower.)  I continued a little further to reach the Rattlesnake Swamp Trail. 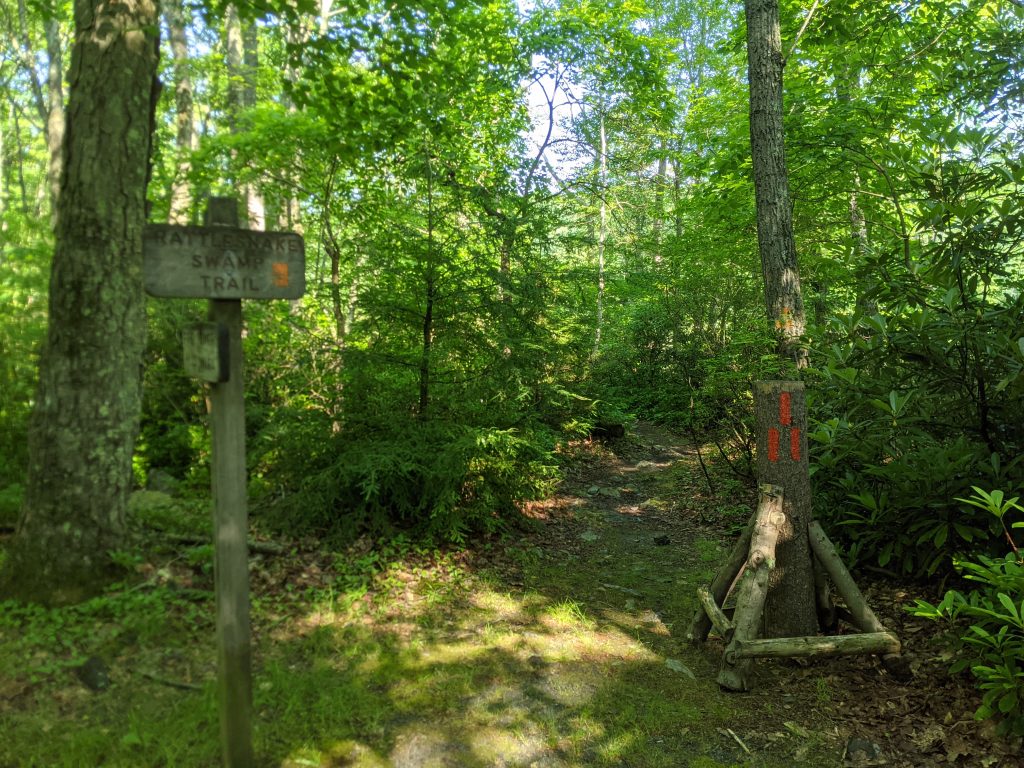 This is a great trail that skirts the edge of Rattlesnake Swamp.  The swamp will be on your right, the ridge that the AT follows will be on your left.  This trail is mostly dirt and roots, with some rocks.  Mountain Laurel was out, and there are a significant number of Rhododendron tunnels.  It will be another month for those blooms though. 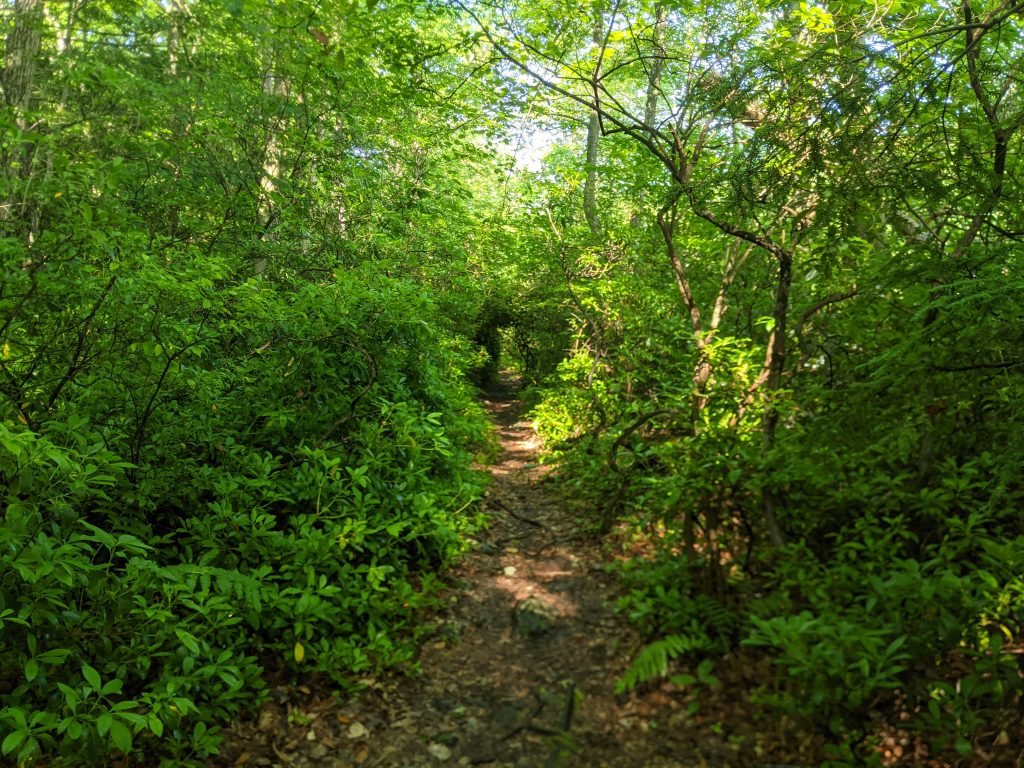 Lots of Mountain Laurel in bloom. 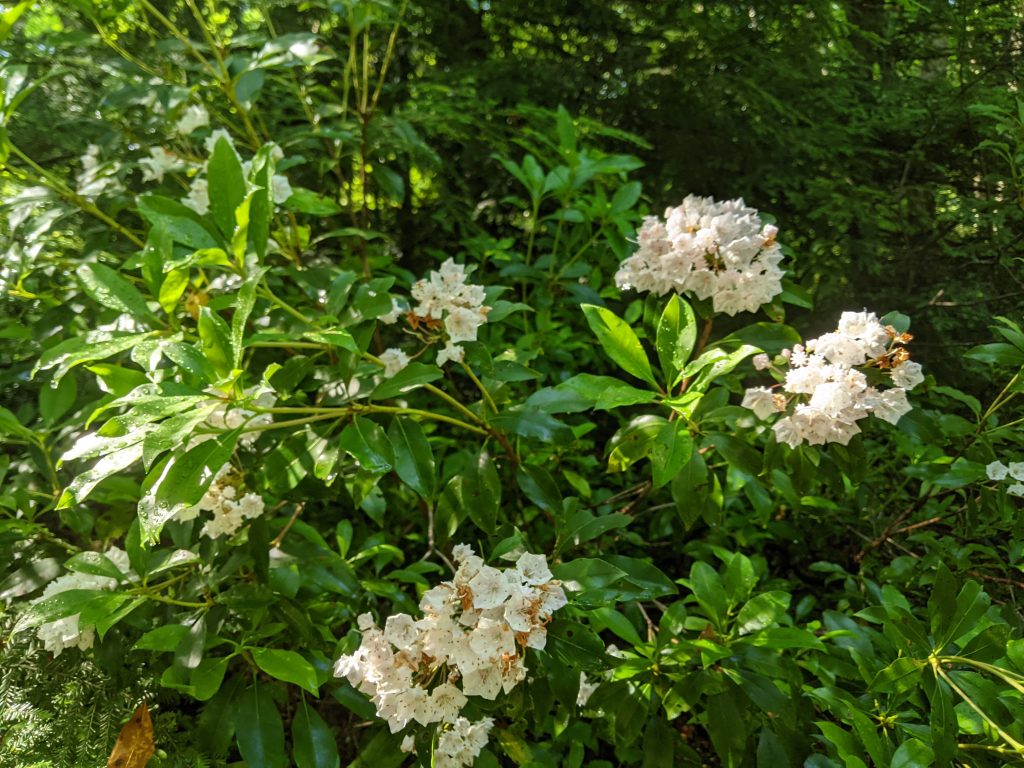 The moist ground made for a lot of mushrooms, these were hard to photograph due to the humidity. 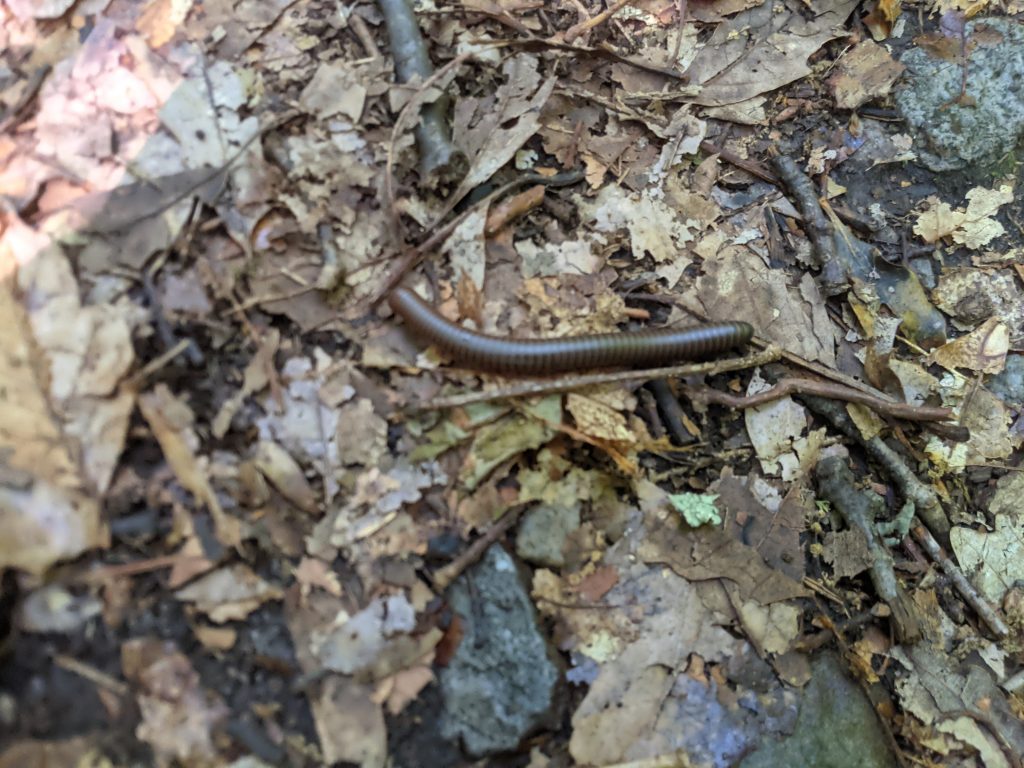 While walking along, I startled this guy and he dove under a leaf. 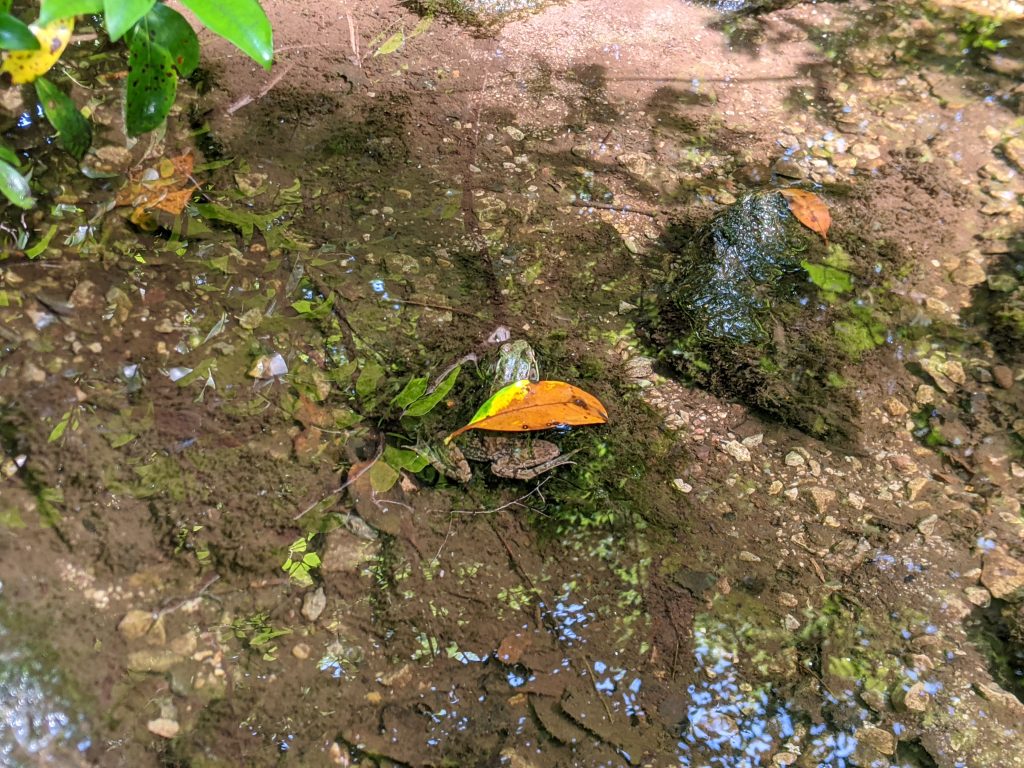 Look in the center of this picture for yet another frog. 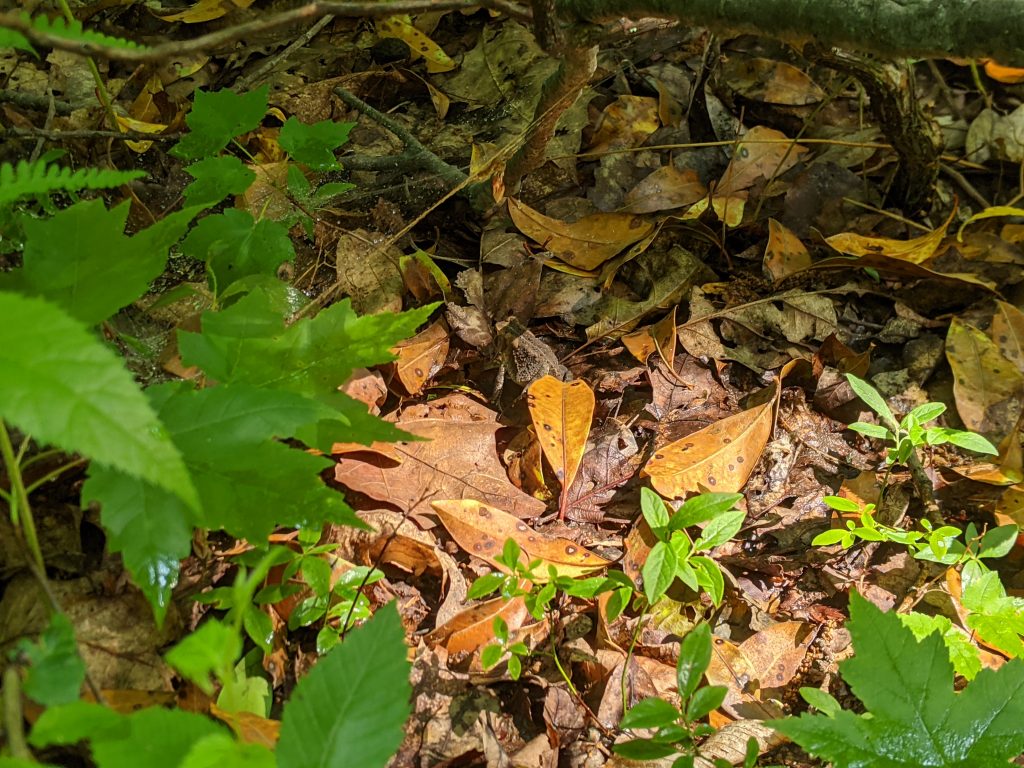 Before ascending the ridge to the Appalachian Trail, I took a little spur trail to the AMC Mohican Outdoor Center, a camping spot on the AT for through-hikers.  This looked pretty cool, and I wanted to cut through to see Catfish Pond up close, but there was a group of people in a class by the pond access.  I regret not getting a picture of the pond, it looked like a really nice spot.  The spur trail was all boards. 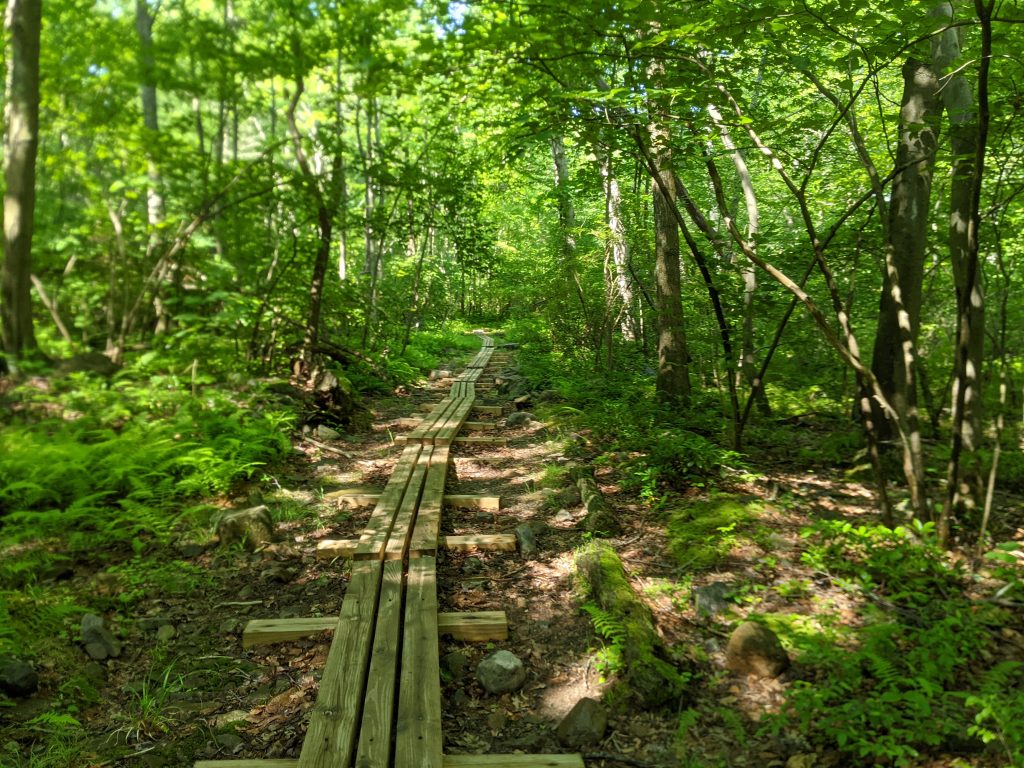 From there it was back to the Rattlesnake Swamp trail and a big climb to get up on the ridge. 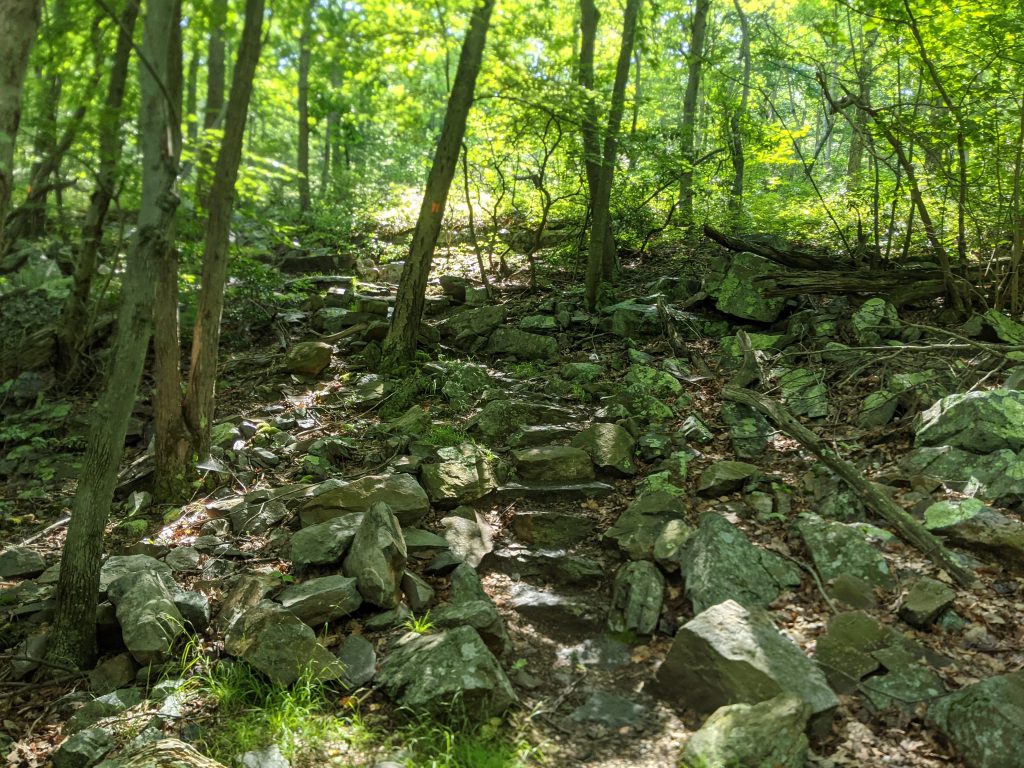 As I got near the top, I thought I saw a limited viewpoint. 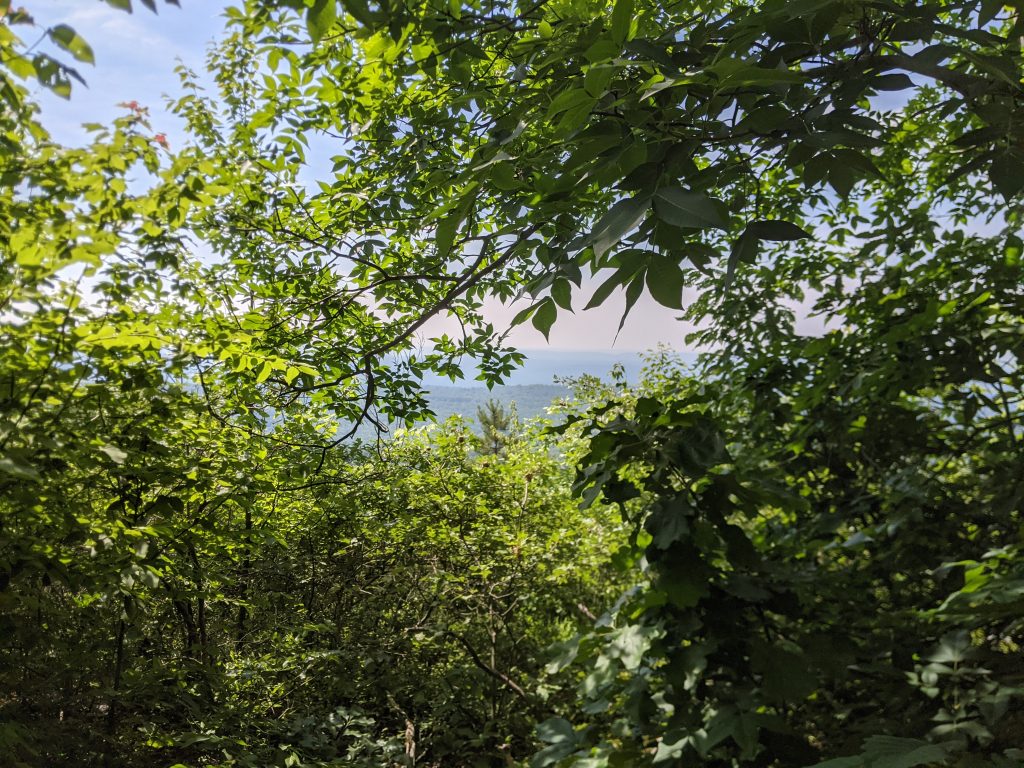 20 Feet further down the trail: 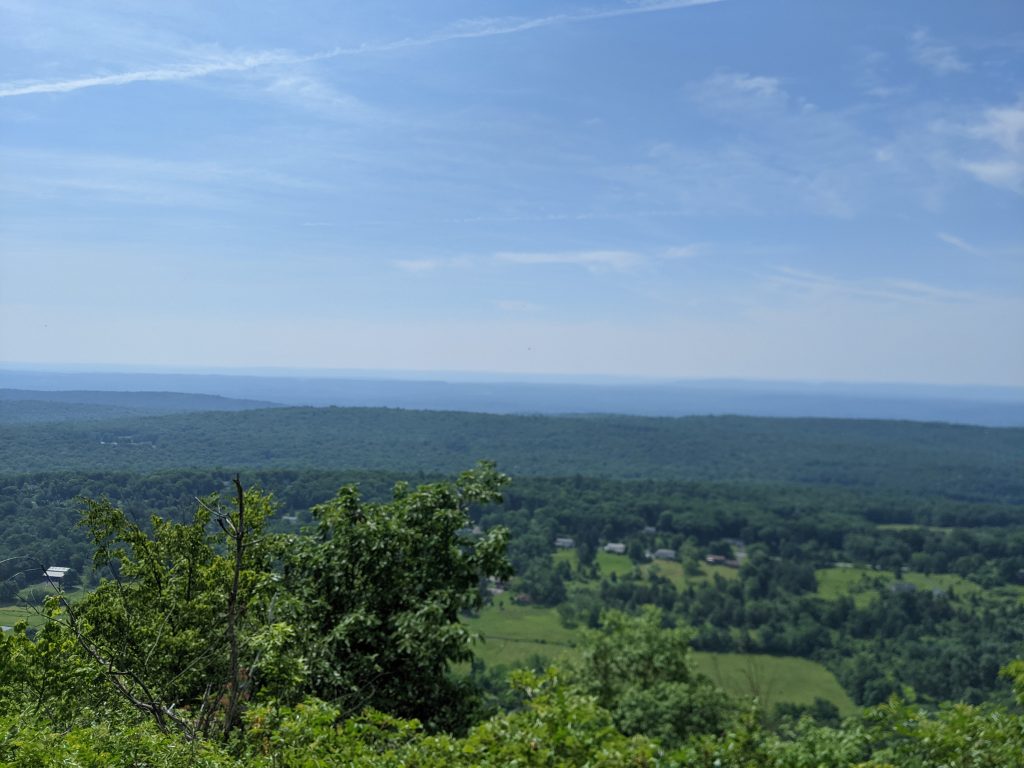 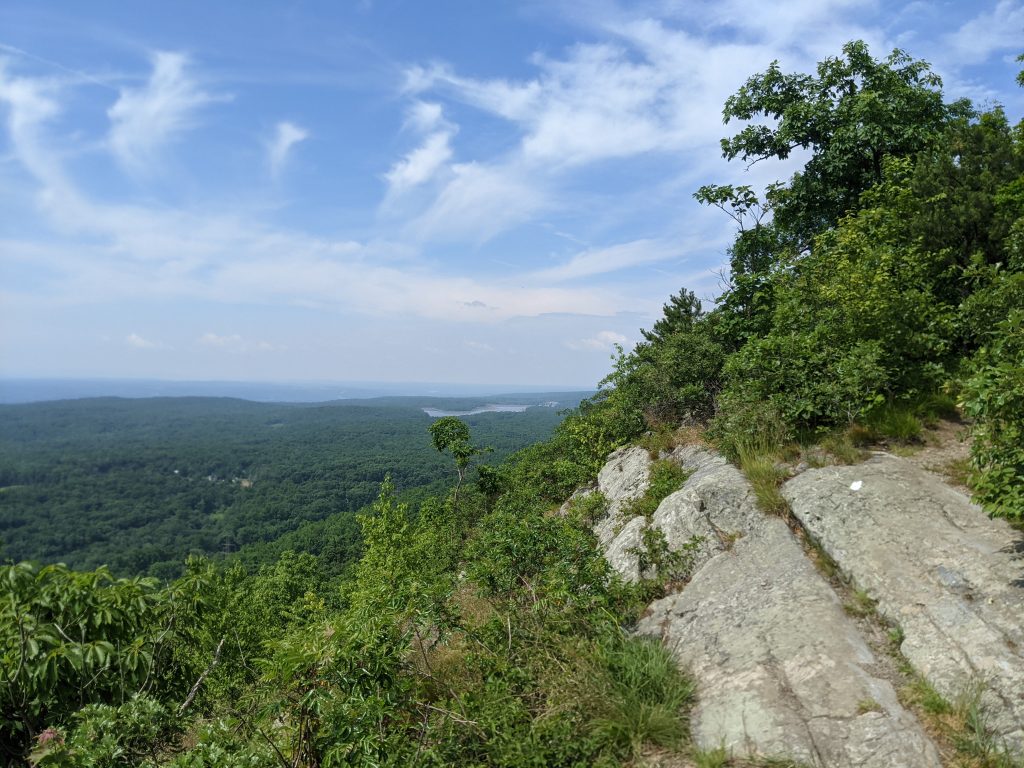 Amazing views.  Fortunately it was a great day for views.  I’m not sure how I would feel with snow and ice at this location as it was a sheer drop off at the cliff’s edge.

It’s also here where I got greedy for miles.  The sensible thing to do would have been to make a left and head to the fire tower and my car for a nice loop.  However, I made a right and headed for Catfish Pond Gap along the Appalachian Trail.  This was a nice walk, except I had to descend into the gap.  That also meant, I had to climb back up to head back to the junction on the AT.  Brutal. 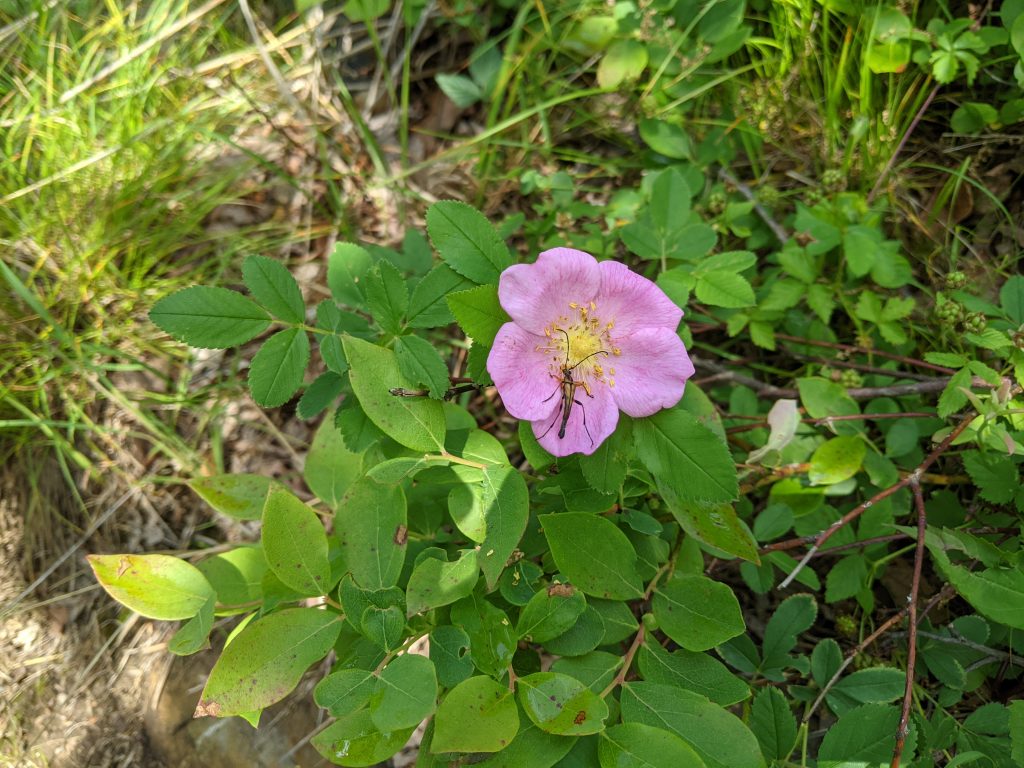 In the gap there was a nice stream to sit by, which was cool and shady – and it allowed me contemplate my last decision.  There were plenty of cars here, and I passed numerous people as I was descending; many of whom I caught up with on my way back. 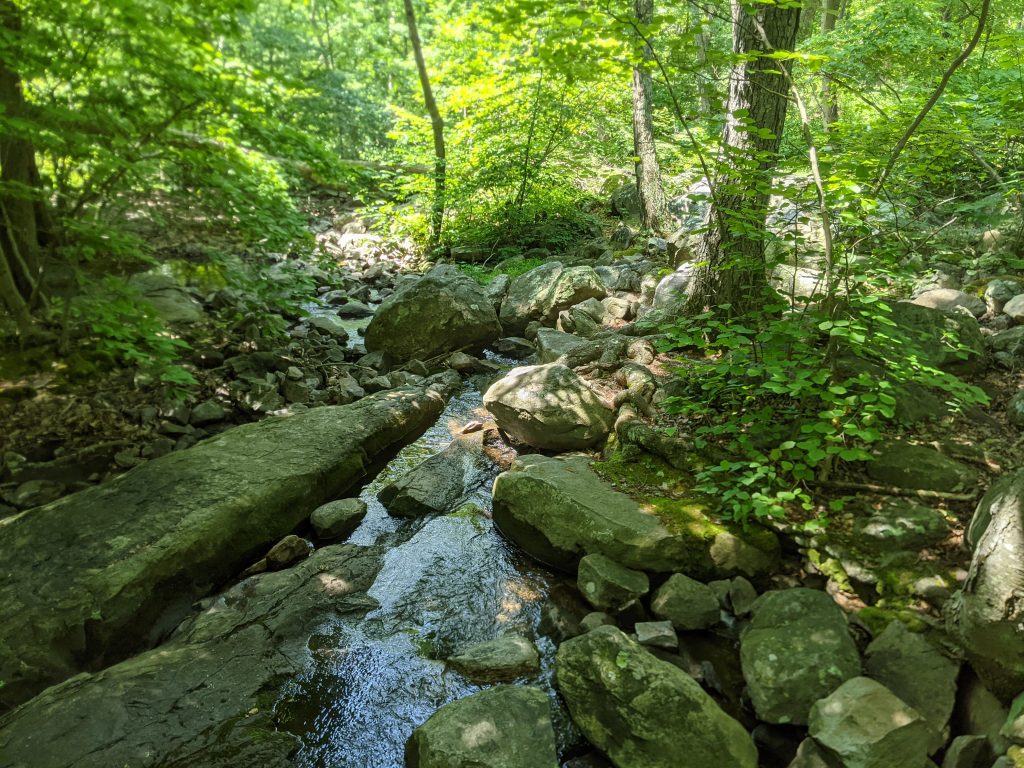 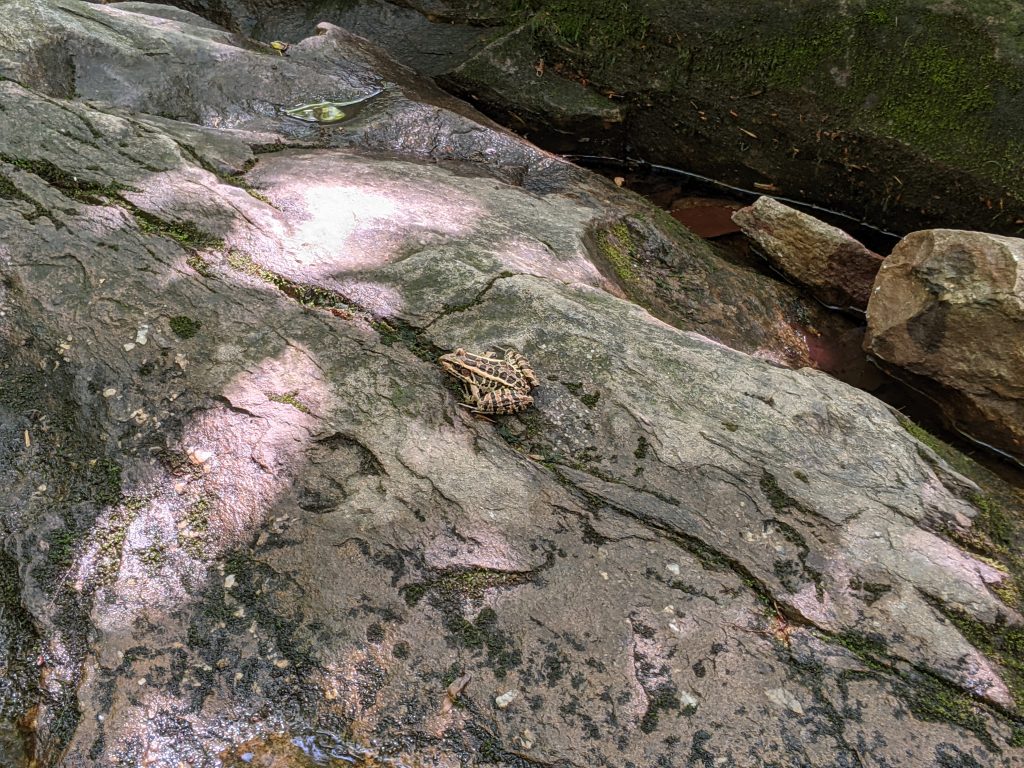 Getting back up on the ridge was murder in the heat and humidity.  Once up on the ridge, it’s a pleasant walk.  There are some great views to your right as you head to the fire tower.  It’s easy to get lost in your thoughts as the walk it relatively flat.  Yes, there are plenty of rocks, but it’s the AT, and that comes with the territory.

On one such rock (which by this time had dried out) I went to step, heard a loud hiss, and used a pole to vault off the rock. 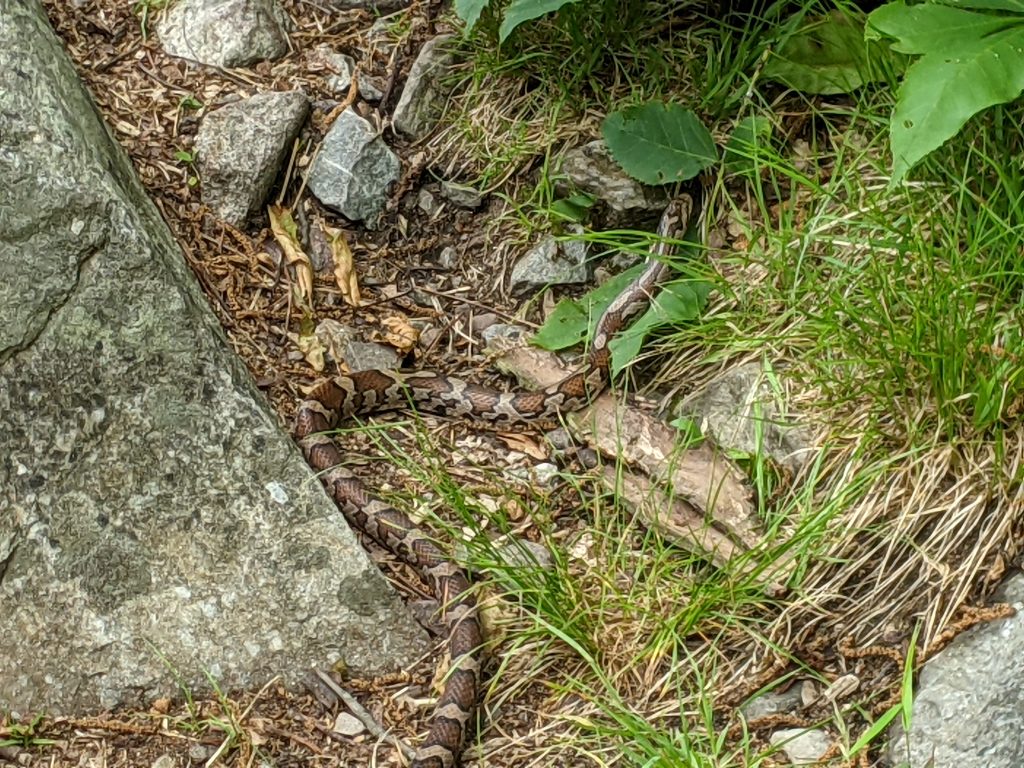 Not a rattler, and the jury is out on if it was a Copperhead.  The colors are right, but the markings are not.  I took a bunch of pictures, but let him be.  And I was certainly more aware of the rocks.

Eventually, I reached the Catfish Fire Tower.  Again, I didn’t climb.  There was a group of 8 or so that were at the picnic table – they all climbed.  And with some hilarity as well. 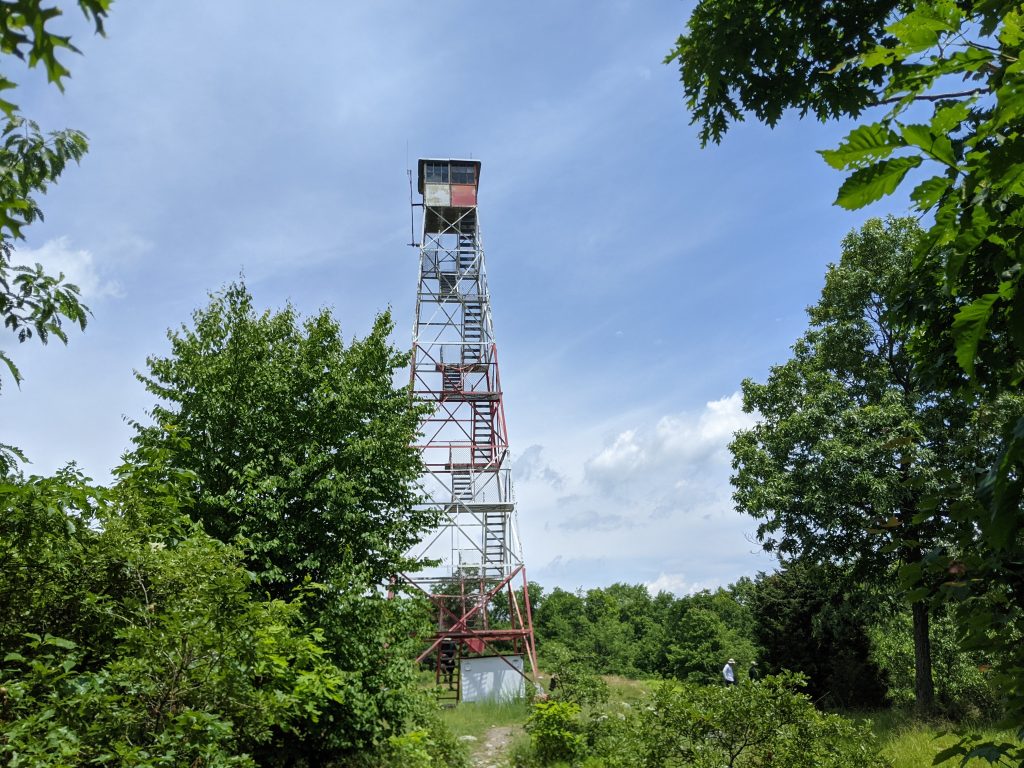 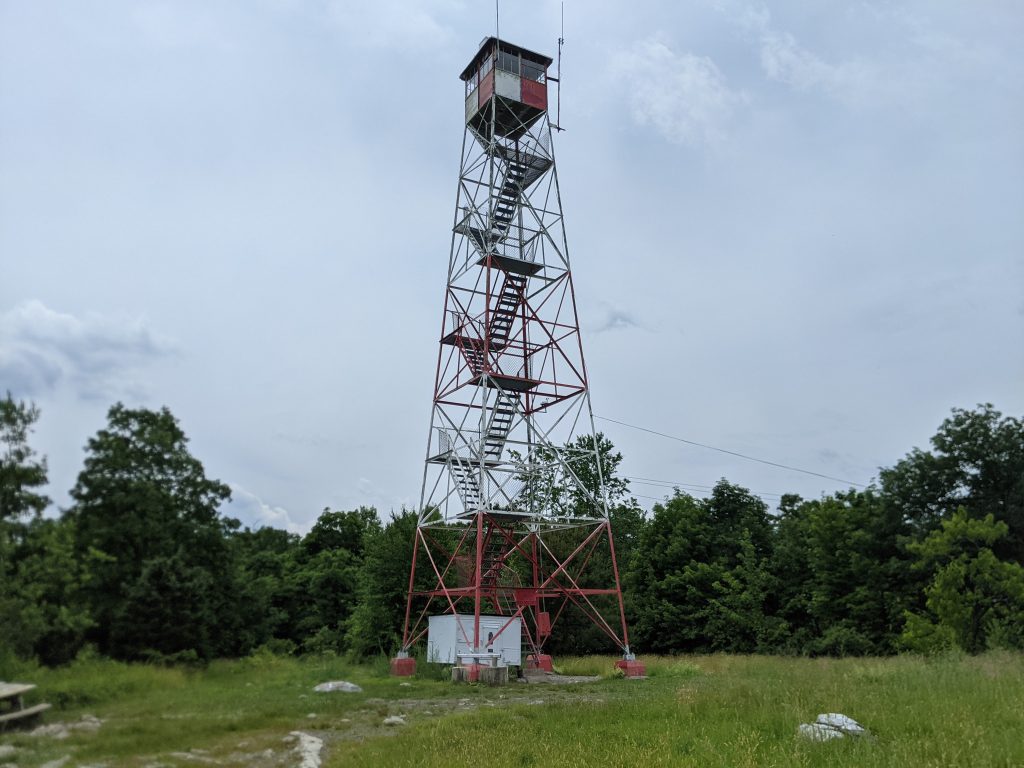 That’s 60 feet tall.  Supposedly, the views are awesome from the top.  I’ll take everyone’s word for it.

I’m really enjoying the various sections of the AT that I’ve been hiking.  Rattlesnake Swamp is a great trail that is quite different from the AT.  I saw a couple of big groups of people, but for the most part it was quiet and empty.  This is definitely an area worth checking out even if it is pretty remote. 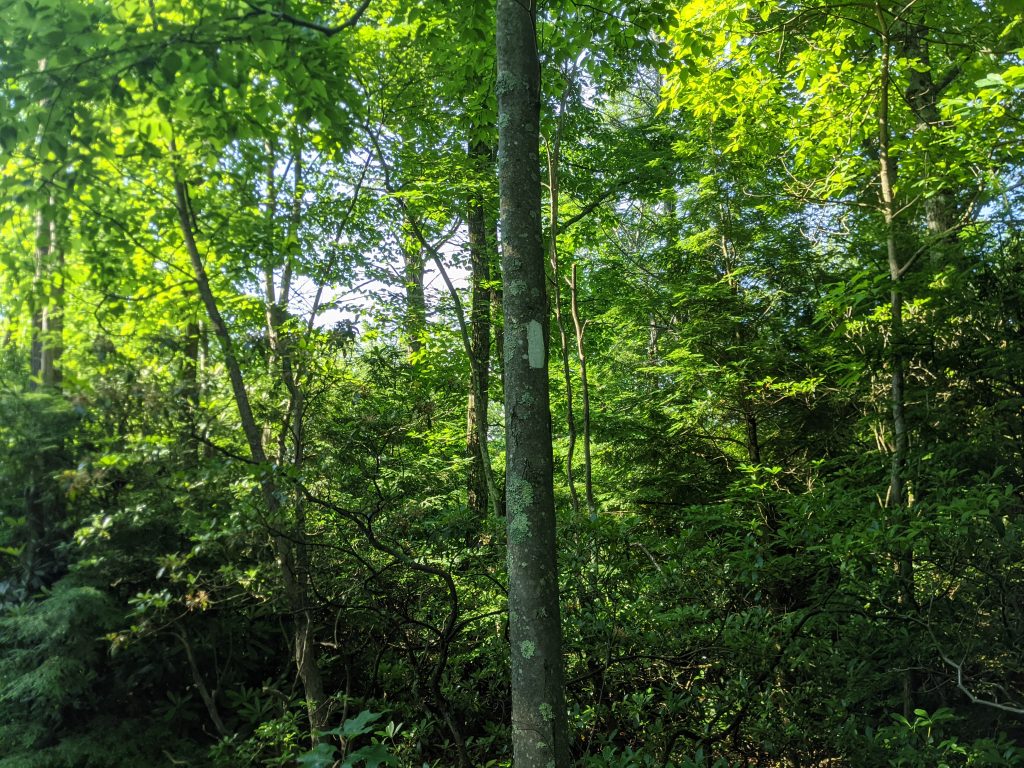 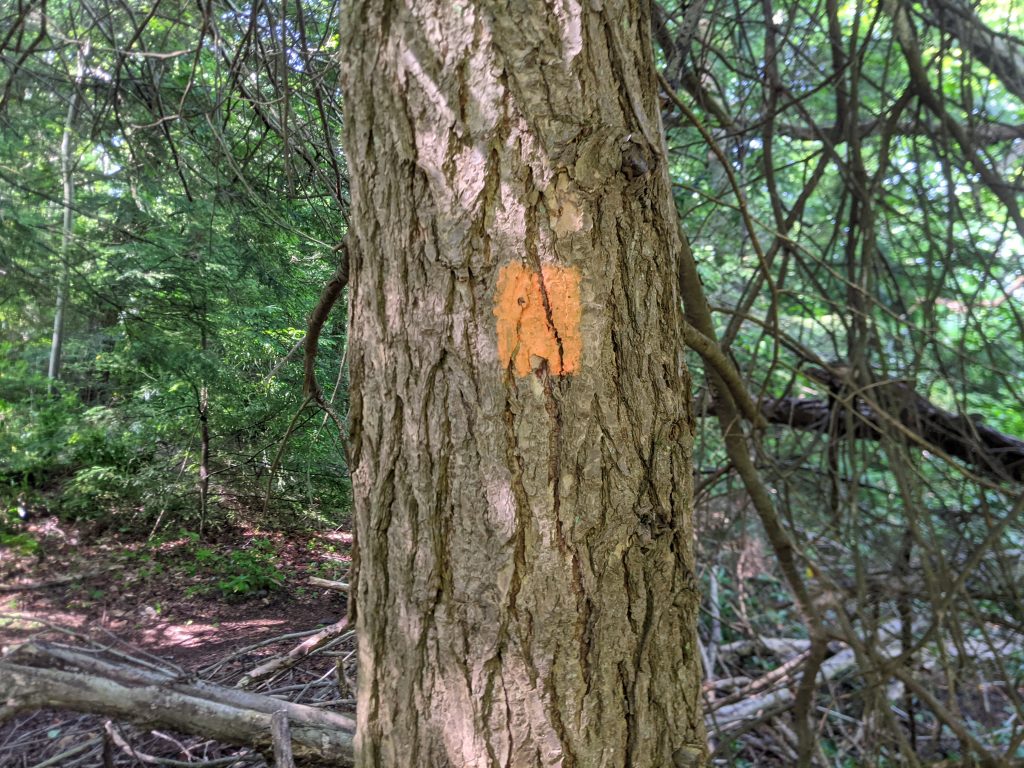