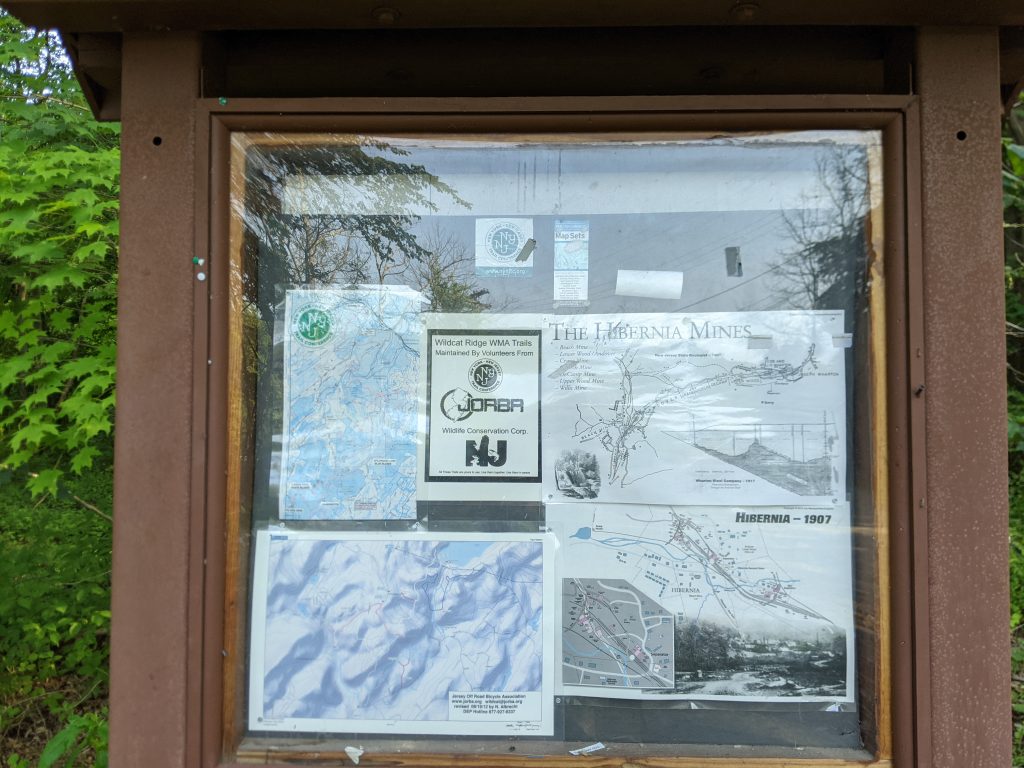 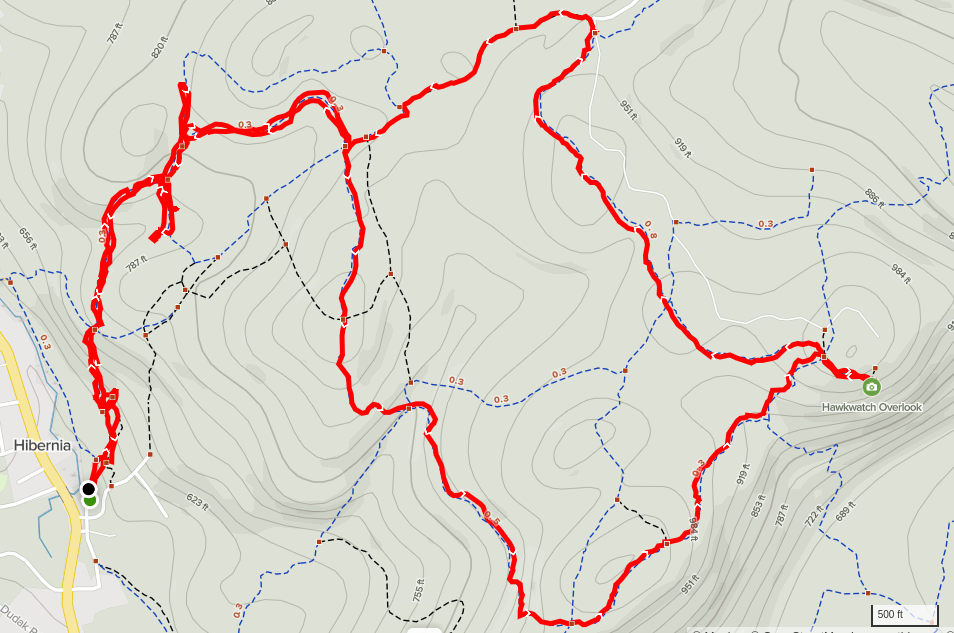 Rain was supposed to wash out most of the weekend, so I took off Friday to do this hike.  It was hot, in the 90s, with greater than 70% humidity.  By the time I reached the overlook, I was drenched.  Rain did not move in until later Saturday night – oh well, one less day at work.

This is definitely not a challenging hike with lots of vertical, though the heat and humidity added to the difficulty.  My goal was to see the bat cave (yes – bat cave), the cemetery and the overlook.  I thought I might initially extend the hike, maybe up to Split Rock Reservoir, but upon reaching the overlook, and realizing it was so hot, I decided to make a respectable loop, and not push it.  Wise decision.

The bat cave is not far down the trail, maybe a quarter of a mile.  It was easy to find, though not obvious at first.  As I’ve mentioned, it was in the 90s.  As I was walking along, I passed a small junction, and the temperature easily dropped 20 degrees.  Turning, I found: 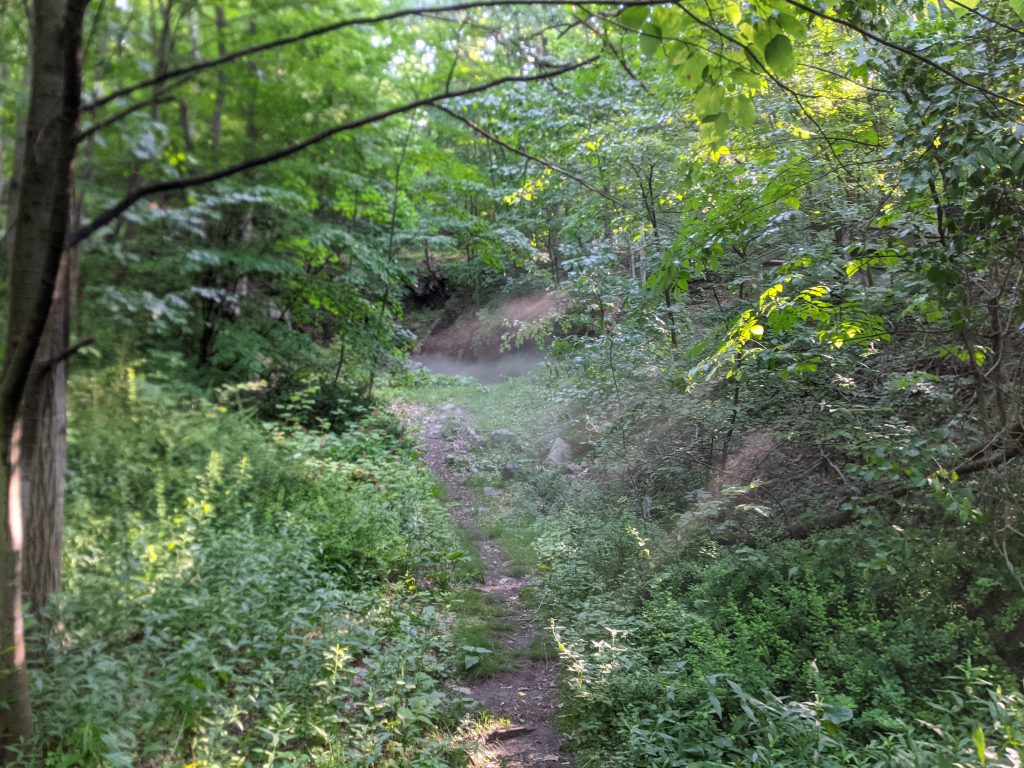 So, I took the trail.  (Bear in mind, if this were Halloween, and or near dark, I never make this turn.)

I was greeted with the following phenomenon. 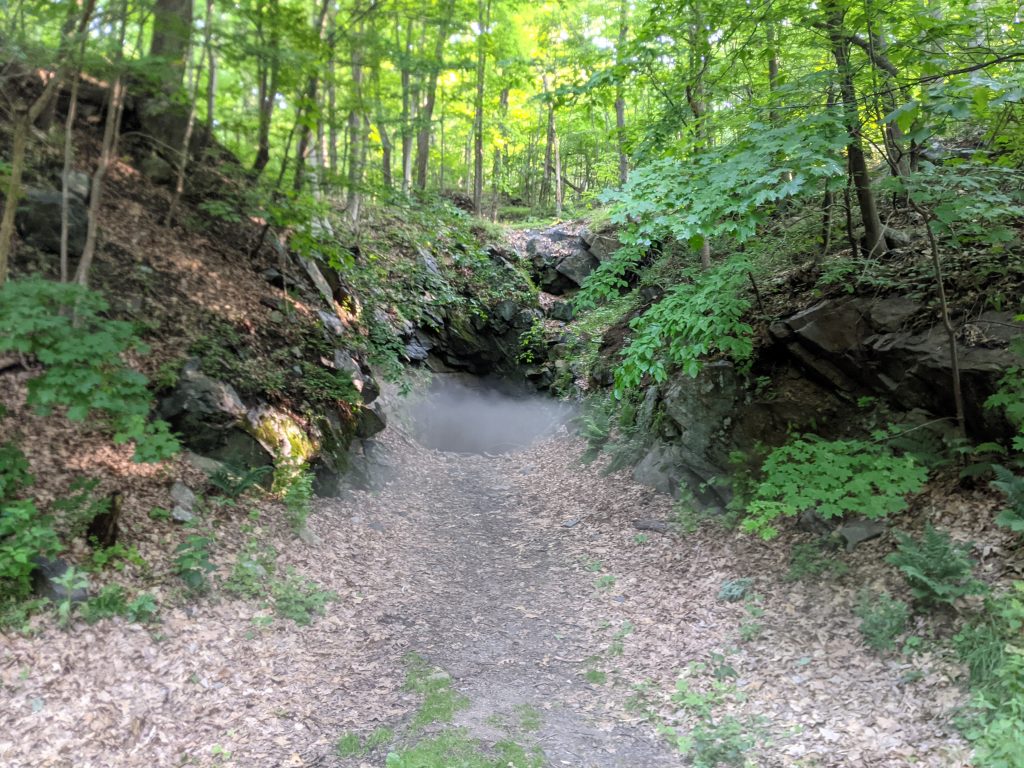 This was originally a mine opening for the Andover mine tunnel, and allegedly goes pretty far back into the mountain.  This area of Hibernia was at one time the Hibernia Iron Mine, one of New Jersey’s largest iron mines.  There are many holes, some very deep, and because of that there are areas that are fenced off.  Bats took up residence in this tunnel, and a viewing platform goes into more detail.  I did not see any bats while there, though given the time of day, I really did not expect to see any.  Over the years the population has dwindled due to disease.  Further, the entranced has been barricaded to allow the bats access and keep people out. 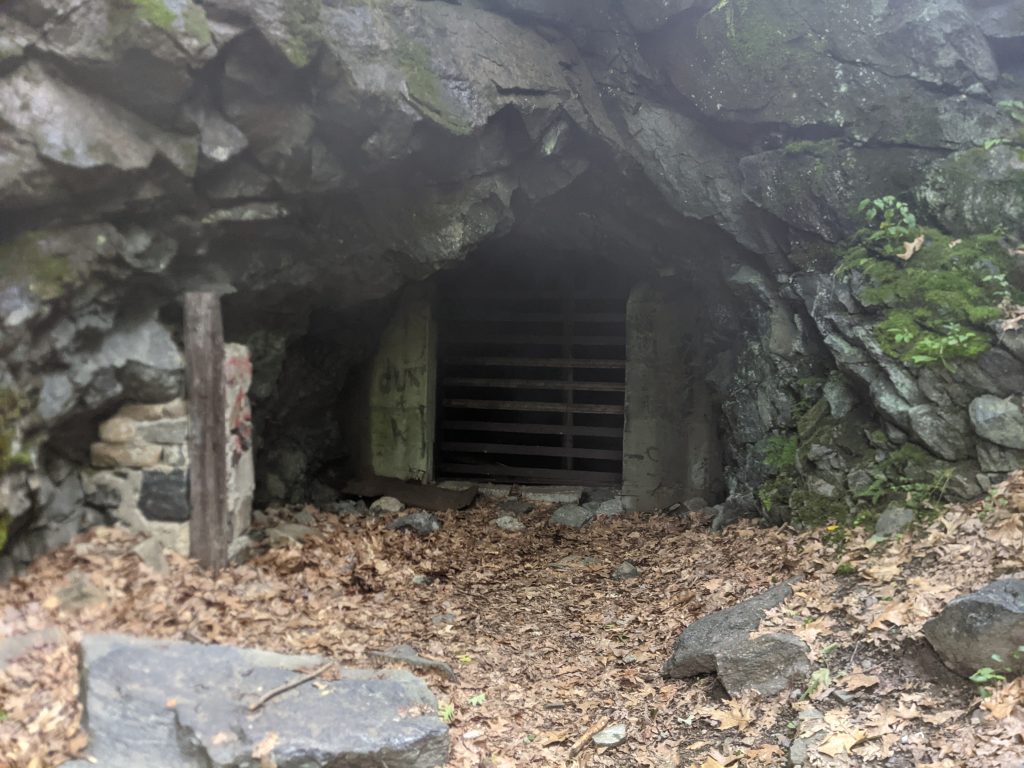 It’s really cool there (pun intended.)  As air rushes out of the cave it immediately contacts the hot humid air and turns to fog, hence the really neat pictures.

I stood around for a  while, and noted that I would come back and “cool off” just before getting in my car.

Trails in the Wildlife Area are really nice and do get used by mountain bikes.  There are some rocky sections, but there are also some very smooth and easy walking sections. 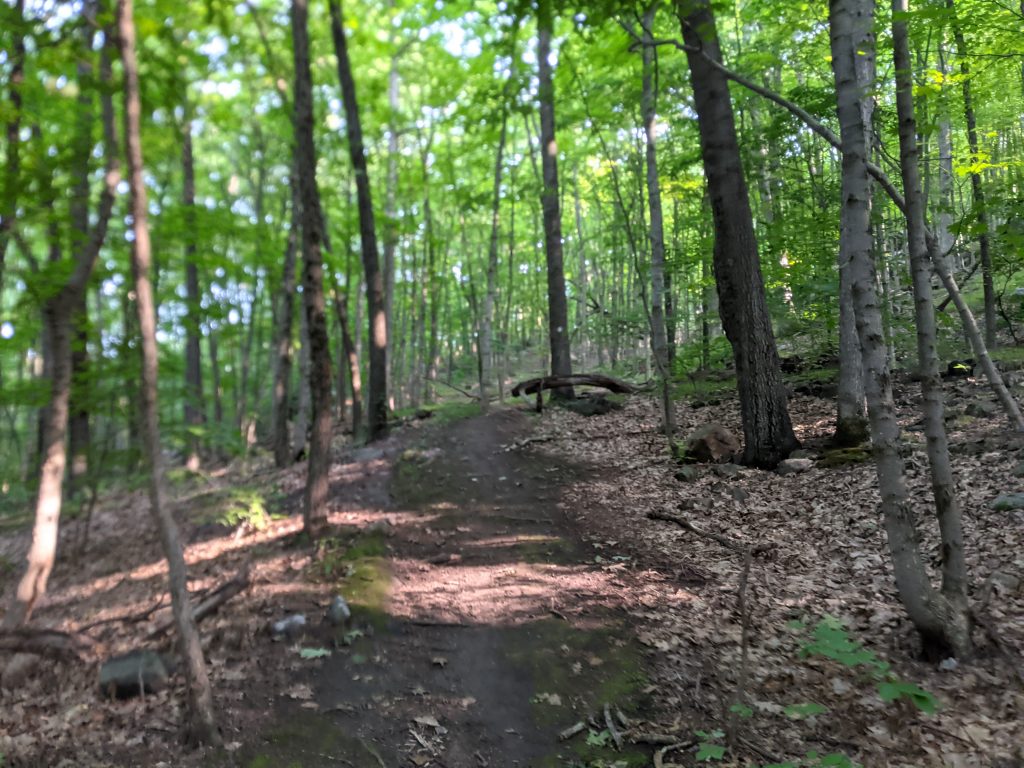 It rained the day before, so lots of fungus about.

Be careful hiking here, there are lots of side trails and woods roads.  Back in the late 1800s and early 1900s there existed a thriving mining town in the area.  Some of the woods roads are still used.  At one point the trail meanders on top of a mining berm. 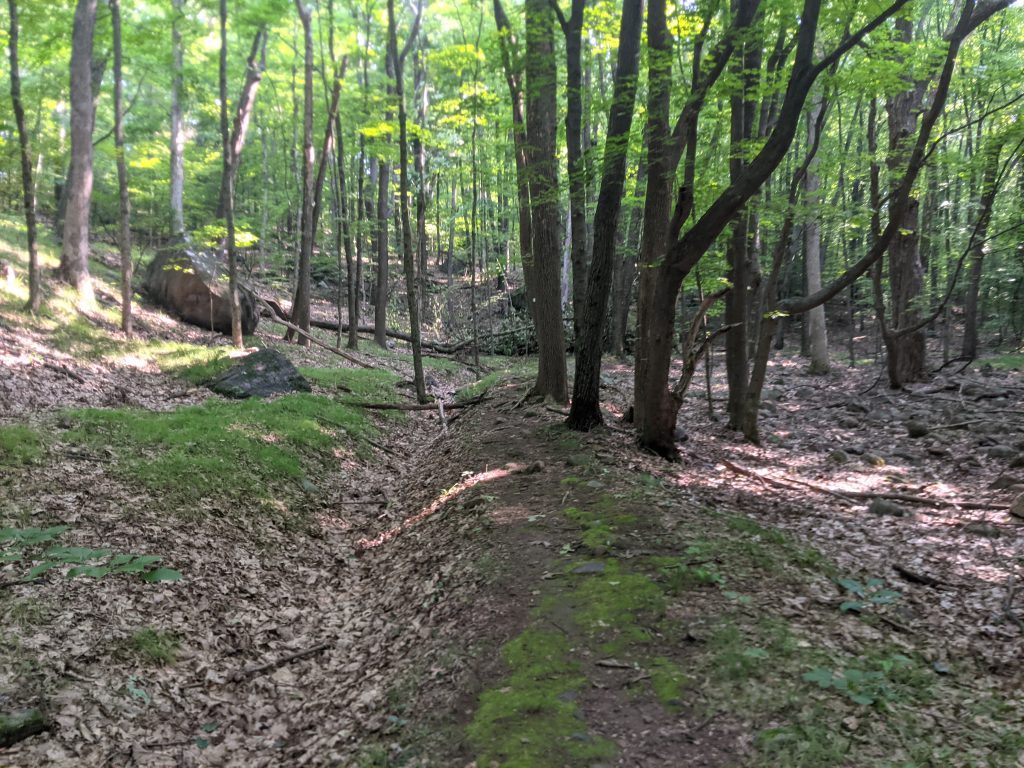 (The leaves cover the ditch, to the left of the berm.) 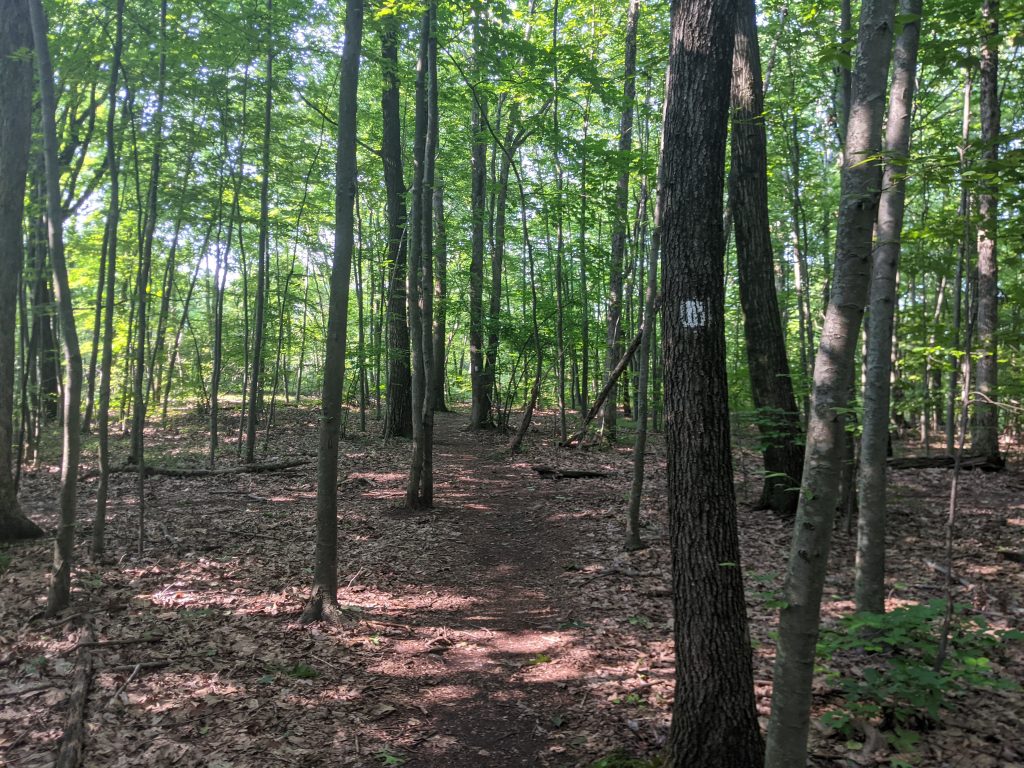 When the trail junctioned with the Flyaway trail, I made a right, and walked about 300 yards to the Hawkwatch Overlook.  Absolutely amazing views.  I’ve read that you can make out New York City on a clear day, and today was clear; but it was too humid, and the foliage blocks out the view. 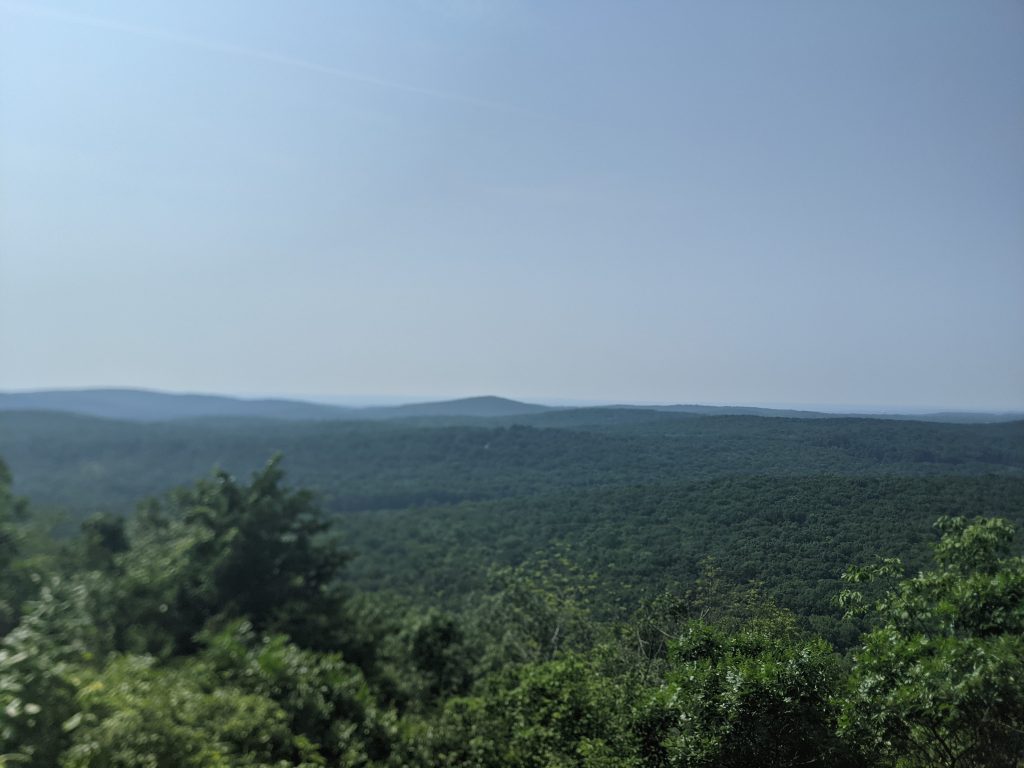 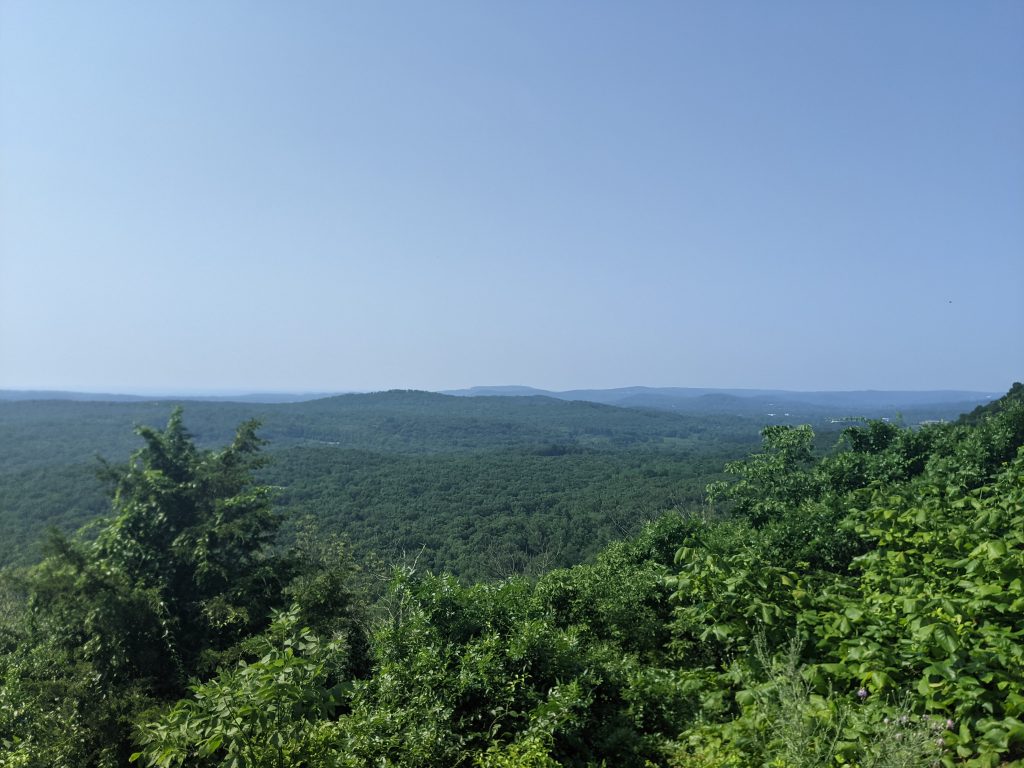 It was too hot to continue to Split Rock Reservoir, which was a potential.  I took the Flyway Trail (only a mile or so to a parking lot) and then made a left.  Partway down the Flyway trail I found this:

At the parking lot, I made a left, yet the trail blazes stayed the same color.  Same trail?  The map called this trail the Hibernia Brook trail. 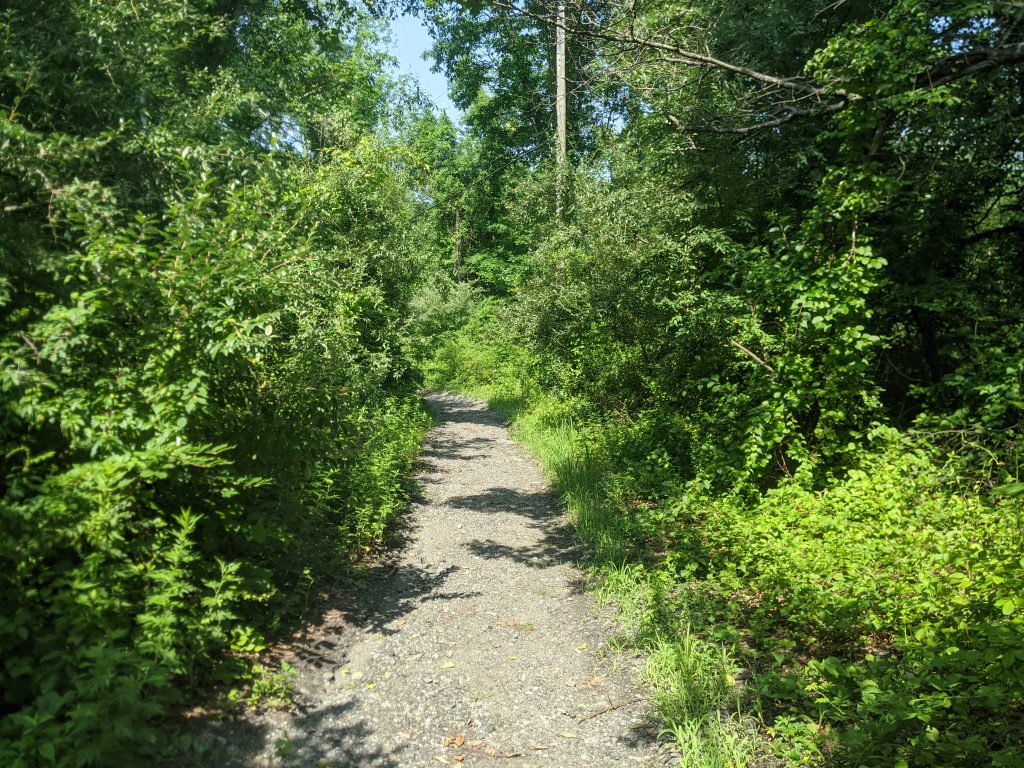 I took the trail to a junction with the Four Birds Trail (which I had passed earlier) in order to find the cemetery – which I missed on the way to the Overlook. 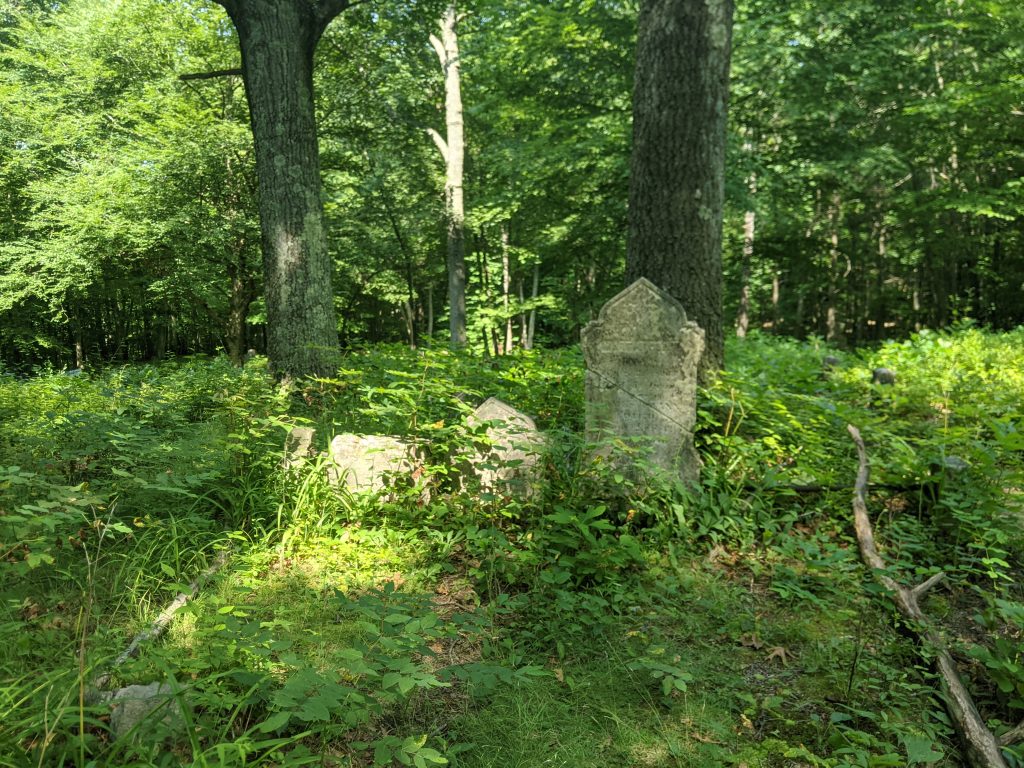 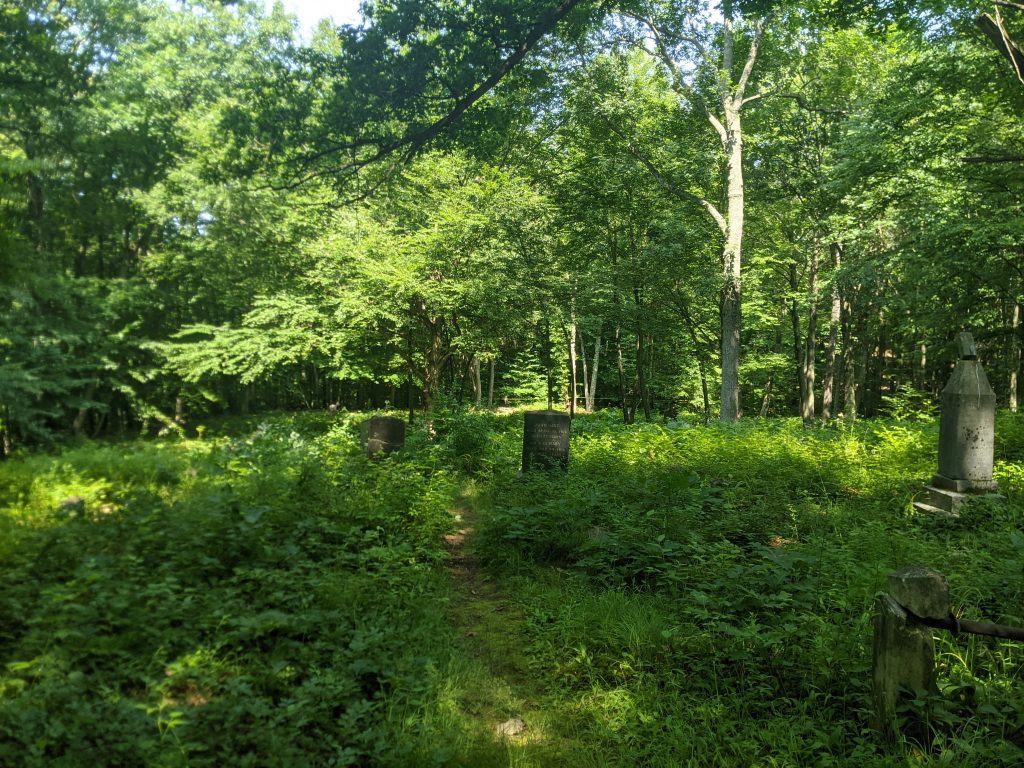 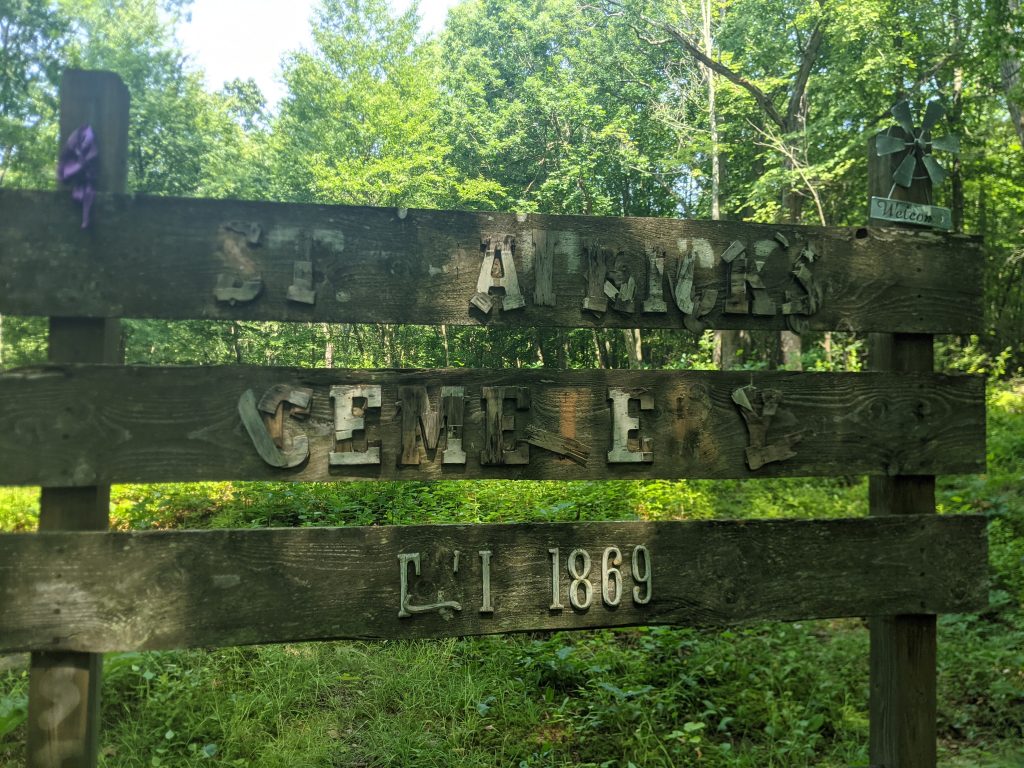 This was a really neat little cemetery, off nestled in the woods.  I wandered around a bit, but tended to stay on the main paths as the small paths were overgrown and screamed of Tick City.  Why a cemetery in the woods?  As this area was a thriving mining community, a cemetery would not be out of the ordinary.  I found some old stones, and there appeared to be markers that have been well taken care of.  While snapping pictures I noticed that it was exceptionally quiet, and I could have stayed a while if it were not so hot.  I’m glad I took the time to come back and find this area.

The Wildcat Ridge Wildlife Management Area is really nice and I recommend a trip.  The next time I come, I’ll look to do the northern section of the area, and possibly link up with Farney State Park and Split Rock Reservoir. 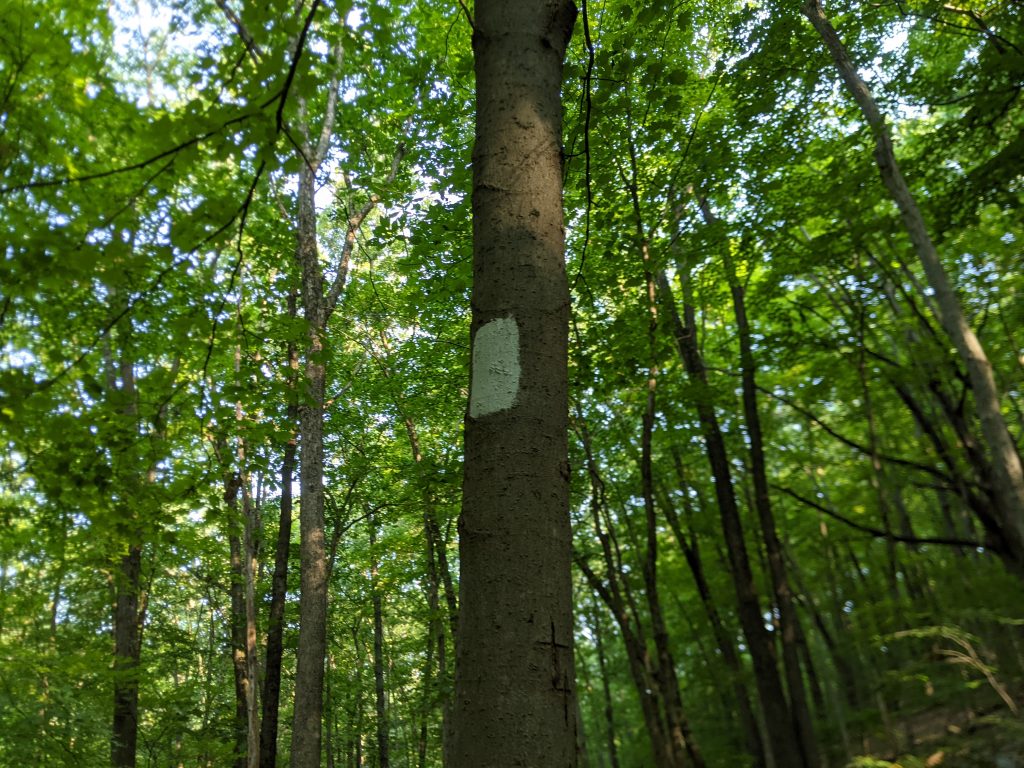 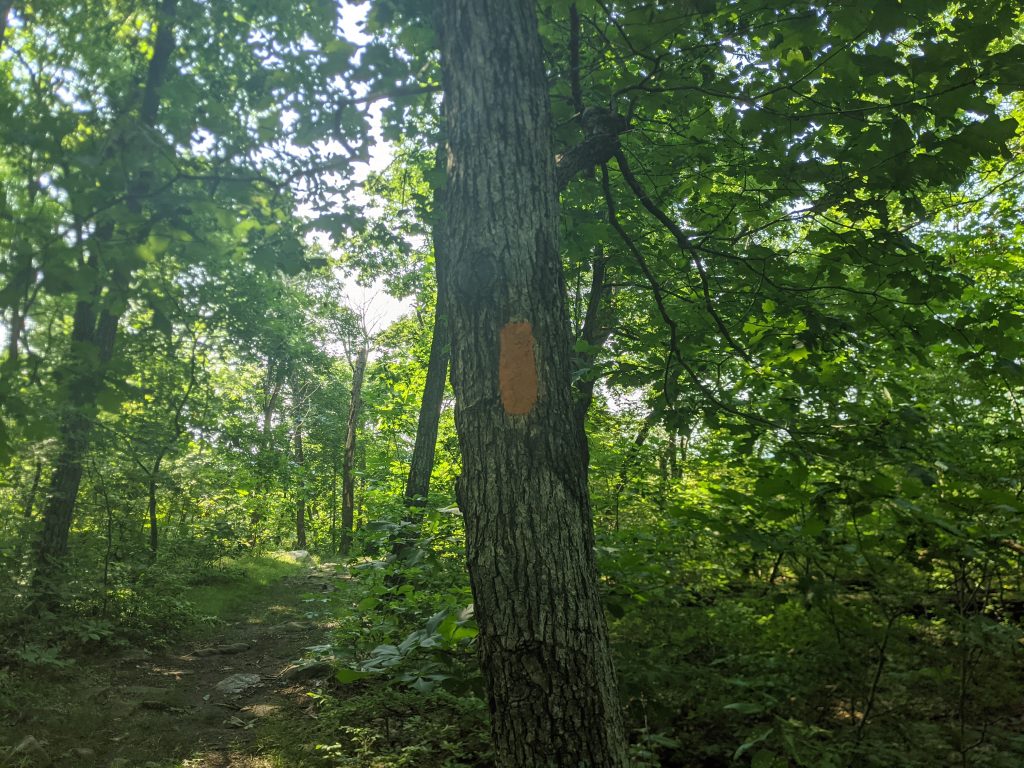