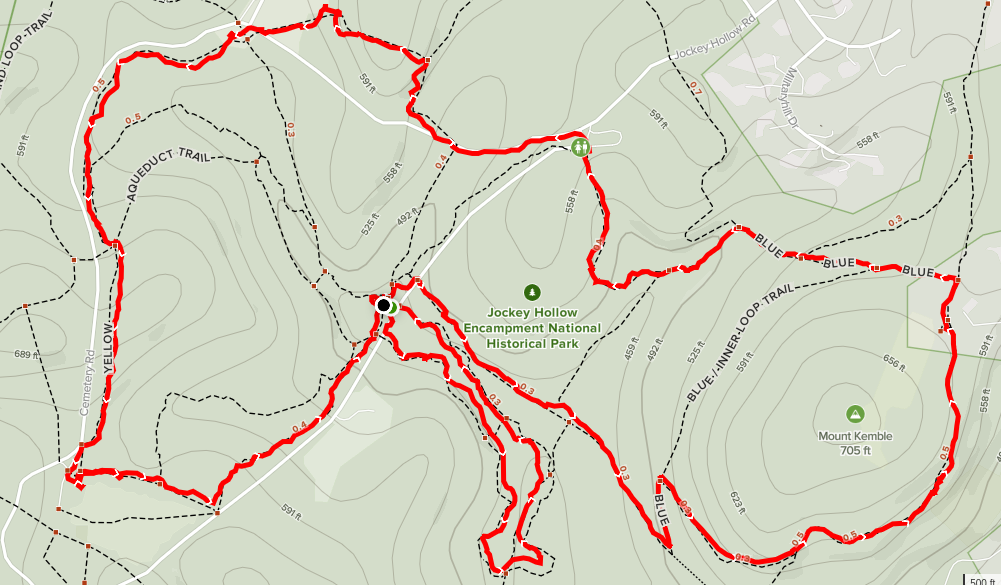 I call this the Unfinished Business hike, as I attempted this one a couple of years ago and did not get to finish due to seeing Noah’s Ark float by.  Today would be a different story.  It was absolutely perfect to start out; 58 degrees, and I was first in the parking lot.  When I finished there were open spaces and the temperature climbed to 68 – you really could not ask for better weather.

I decided to re-hike the Blue trail, then pick up my original plans from last year.  Like the prior hike, the trail surface was mostly wide dirt trails, with very minimal rocks making for great walking.  All trail junctions had trail maps, with a “you are here” marker.  I had a trail map this time. 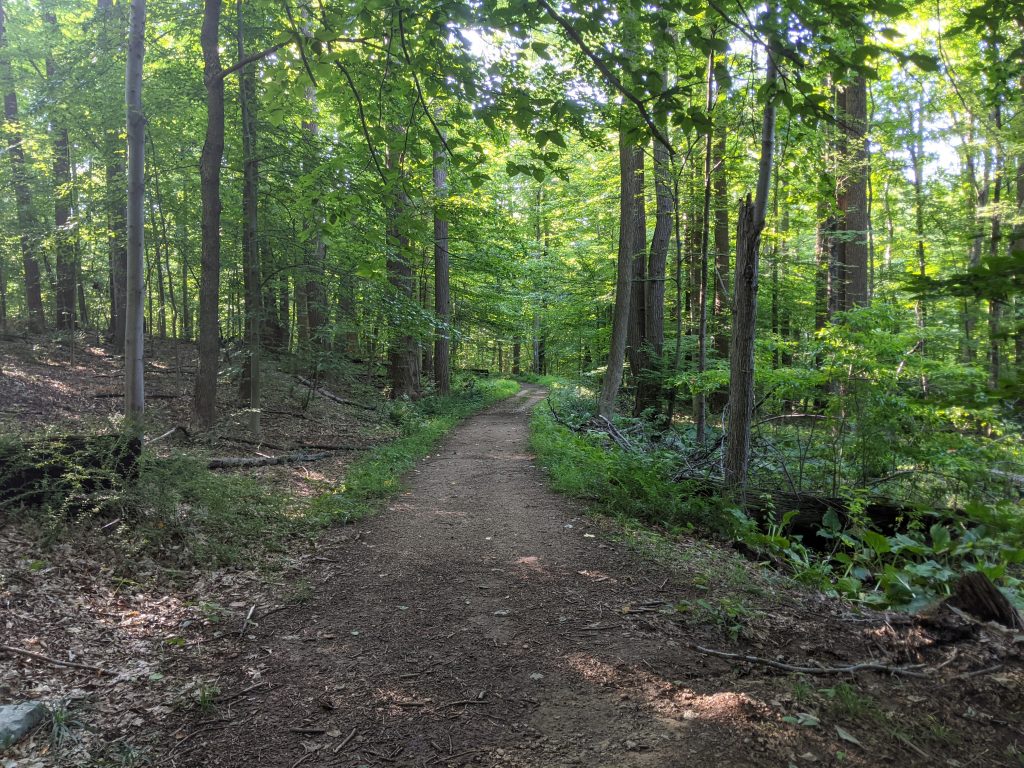 I reached the viewpoint where Stark’s Brigade camped.  The table is gone, but there is still a bench to make use of. 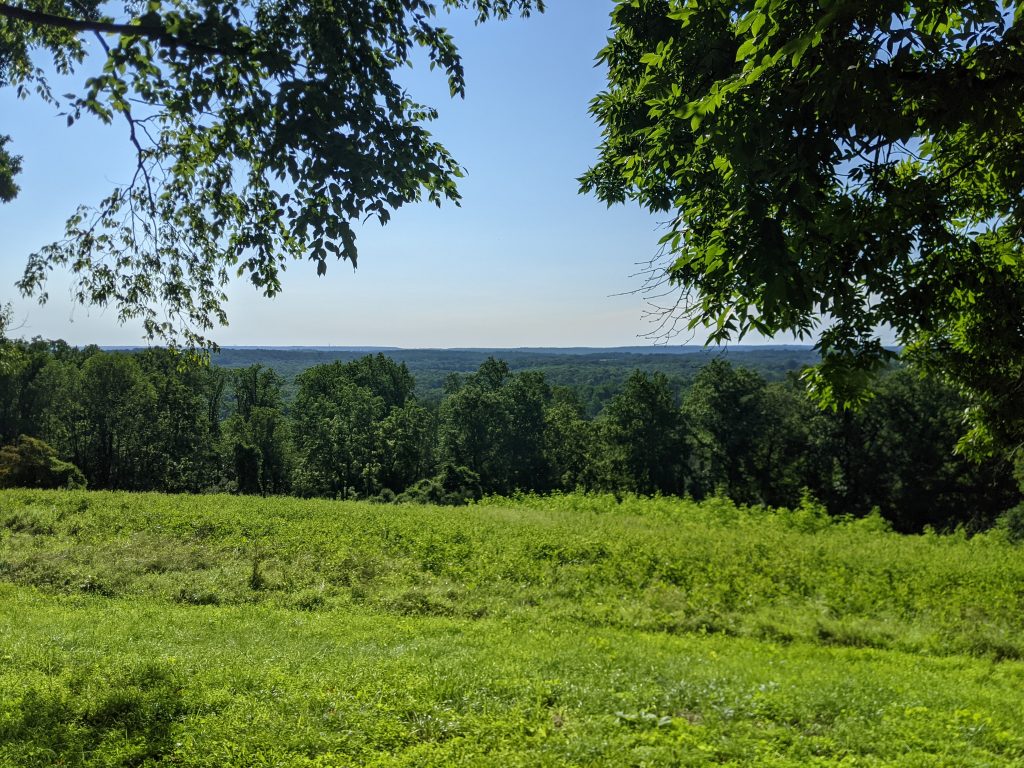 Much of this hike was devoted to history, as you cannot escape it in this park.  There are interpretive signs all over with much detail on Washington’s camp and the severity of the winter they faced.  New Jersey has lots of Revolutionary War history, but this was one area I was not the most familiar with; and it was nice to be immersed in the surroundings.

I took off down the New York Brigade trail headed towards where I had to cut the hike short previously.  I reached Cat Swamp pond in bright sunny conditions and noticed the temperatures were starting to rise.  At least, the pond had a great view this time.

There were lots of bullfrogs making noise.

This next picture does not really show the scale, but the trees are absolutely huge here. 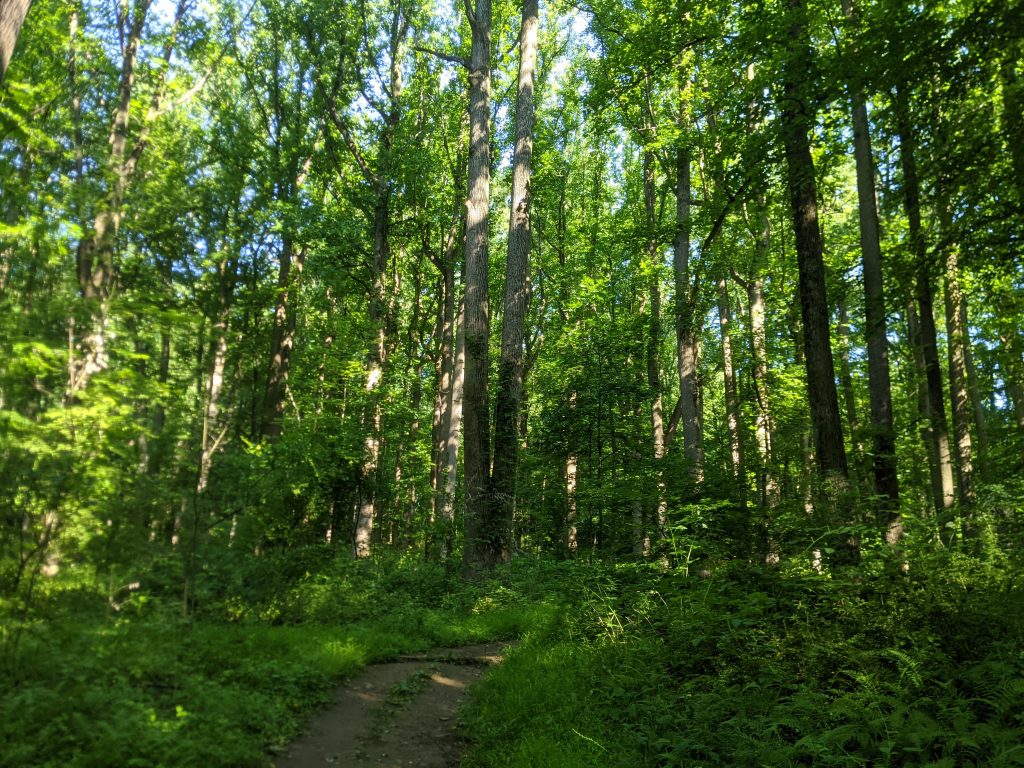 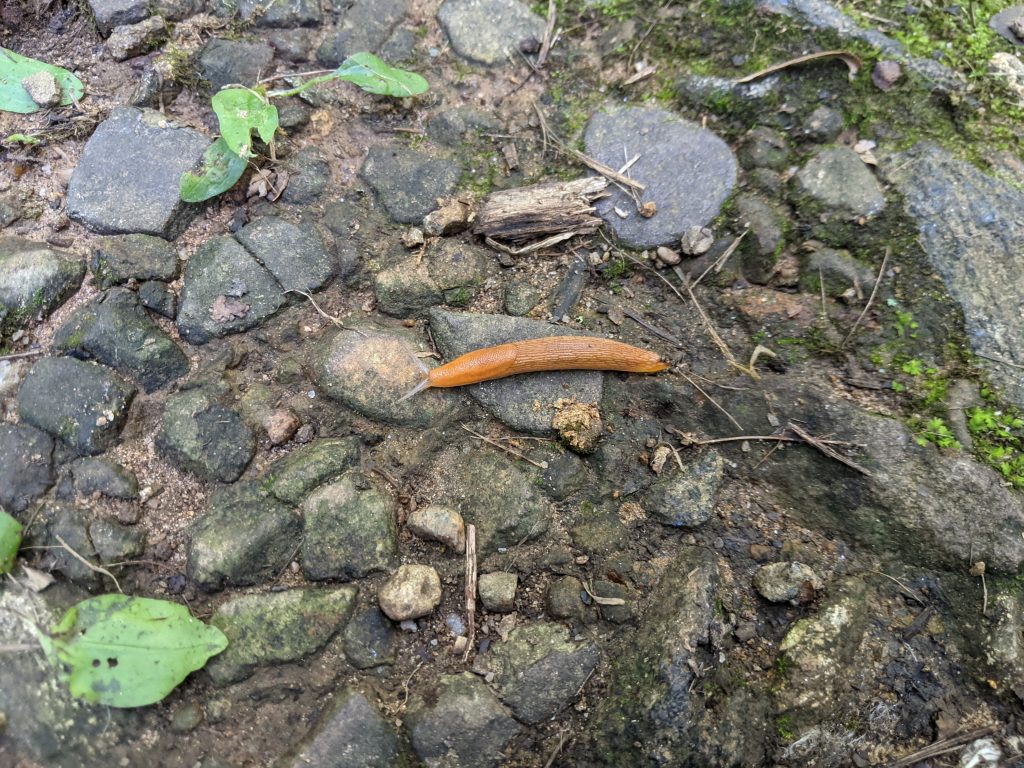 While driving in in the morning, heading toward the Trail Center parking, I passed a tree which had recently fallen (been hit by lightning?)  As luck would have it, the yellow trail passed right by. 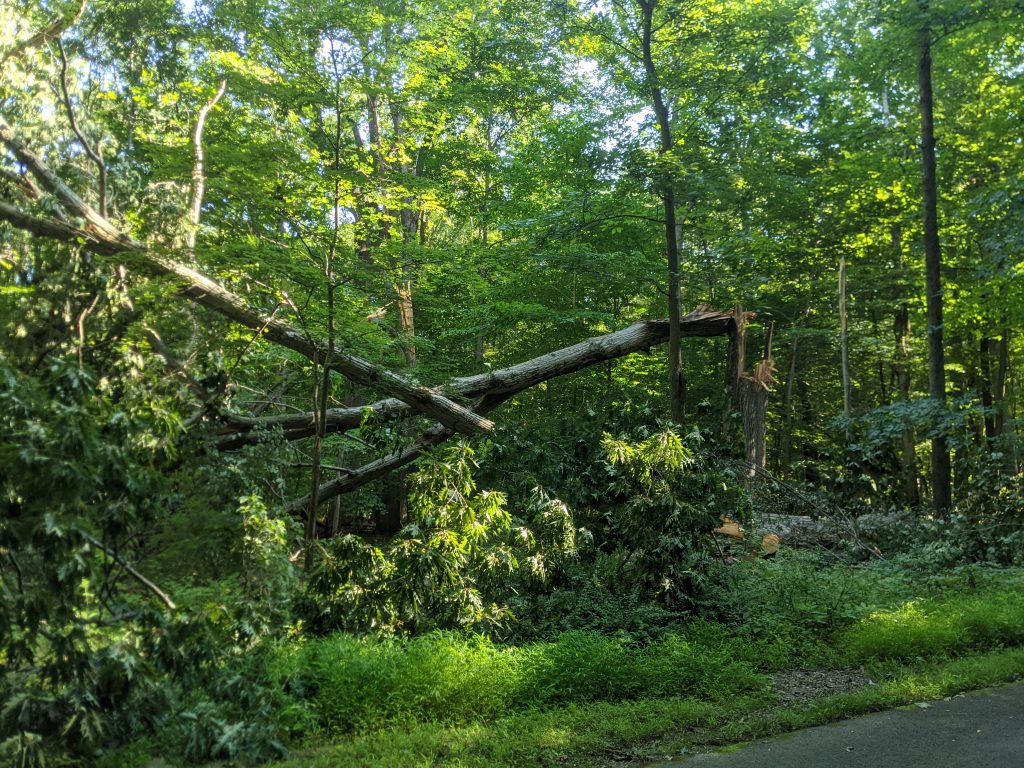 I reached the soldier’s huts, which was part of my destination years ago.  The huts are all replicas but are built on the site of actual huts, and are constructed to pretty close specifications.  You can go in and wonder around them.  It’s interesting to picture and imagine living there well over 200 years ago. 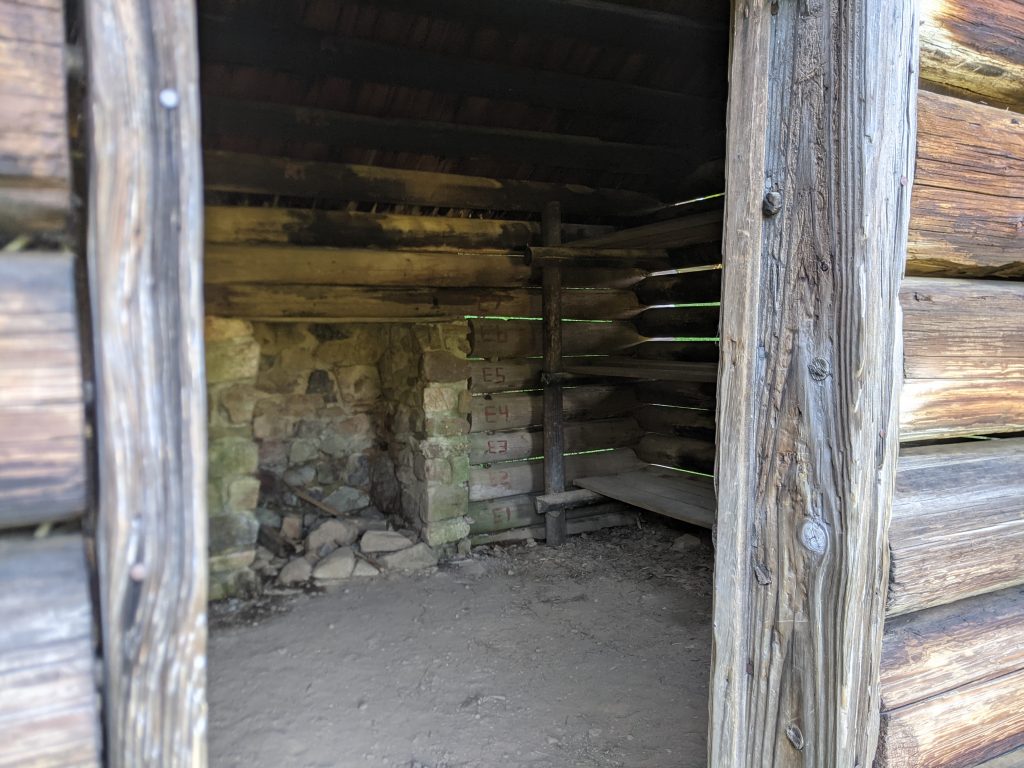 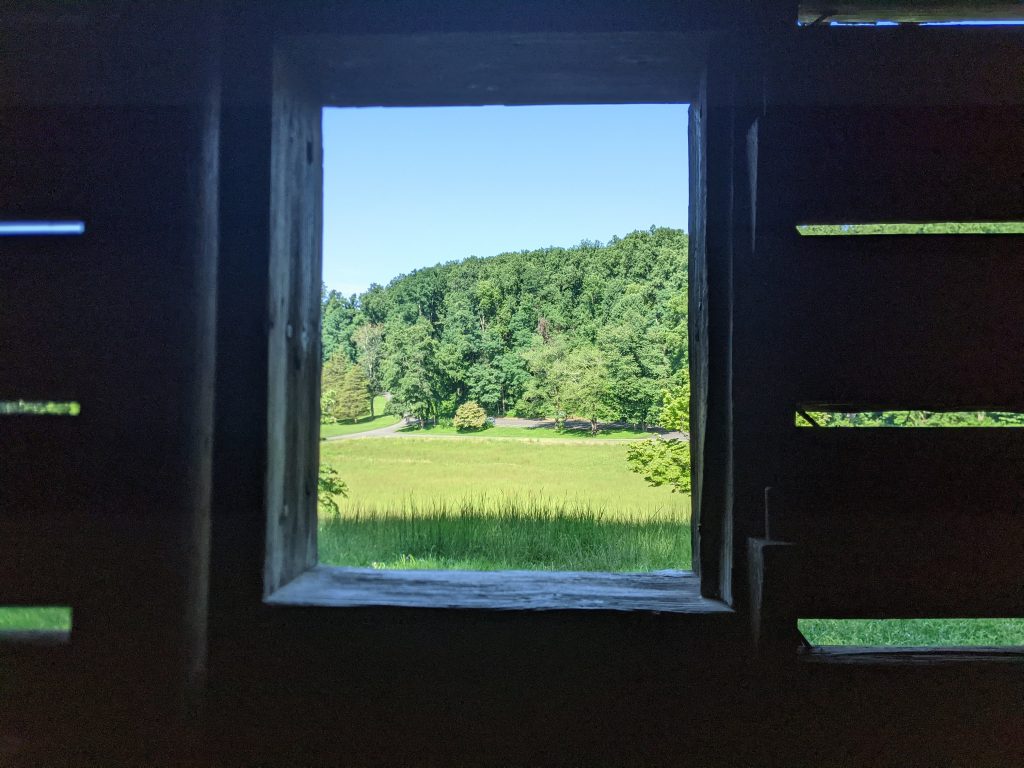 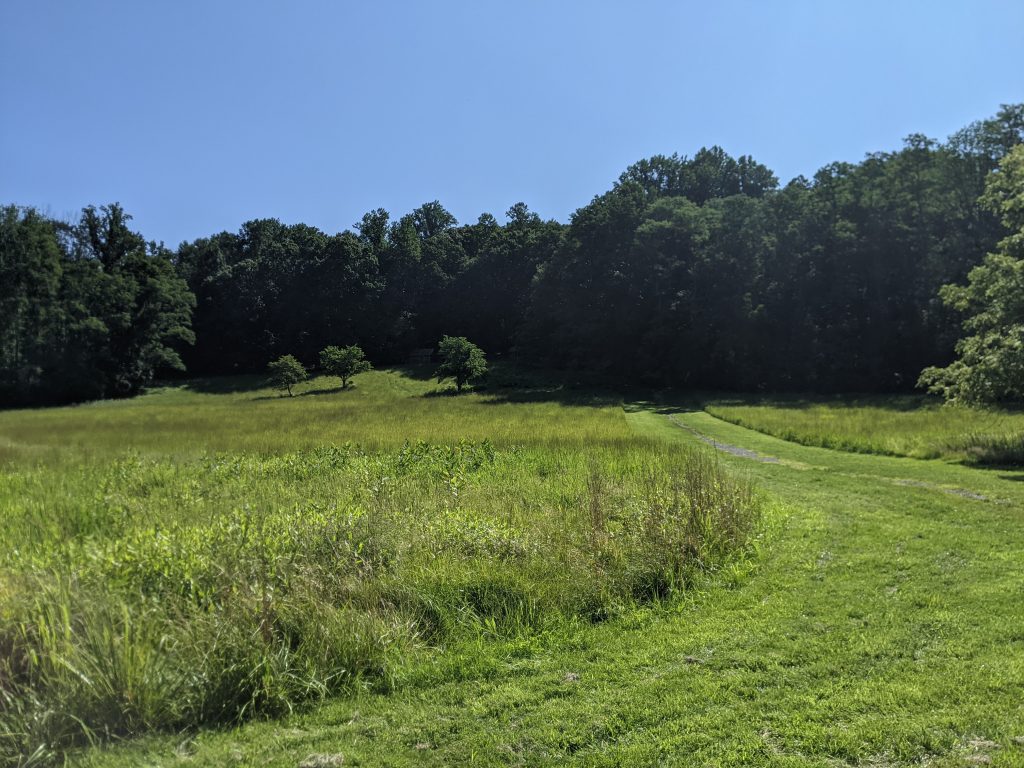 (the huts are in the shadows of the trees, it was still pretty early at the time of this picture.)

The Yellow trail had one steep(ish) climb through some overgrowth, and that was the extent of climbing.  There were other climbs on the Blue trail, but nothing really steep, and mostly gradual.  After the huts, the Yellow trail parallels Cemetery Road, and alternates between overgrowth and dirt trail.  I had been sent a link to a great (short) video called “Why I Hike.”  And while I have not endeavored a long or multi-day hikes, the video speaks to reasons for getting out on the trail, of any length.  It was at this point on the Yellow trail (before reaching Wick Farm) that I had time to ponder the video and the questions it posed. 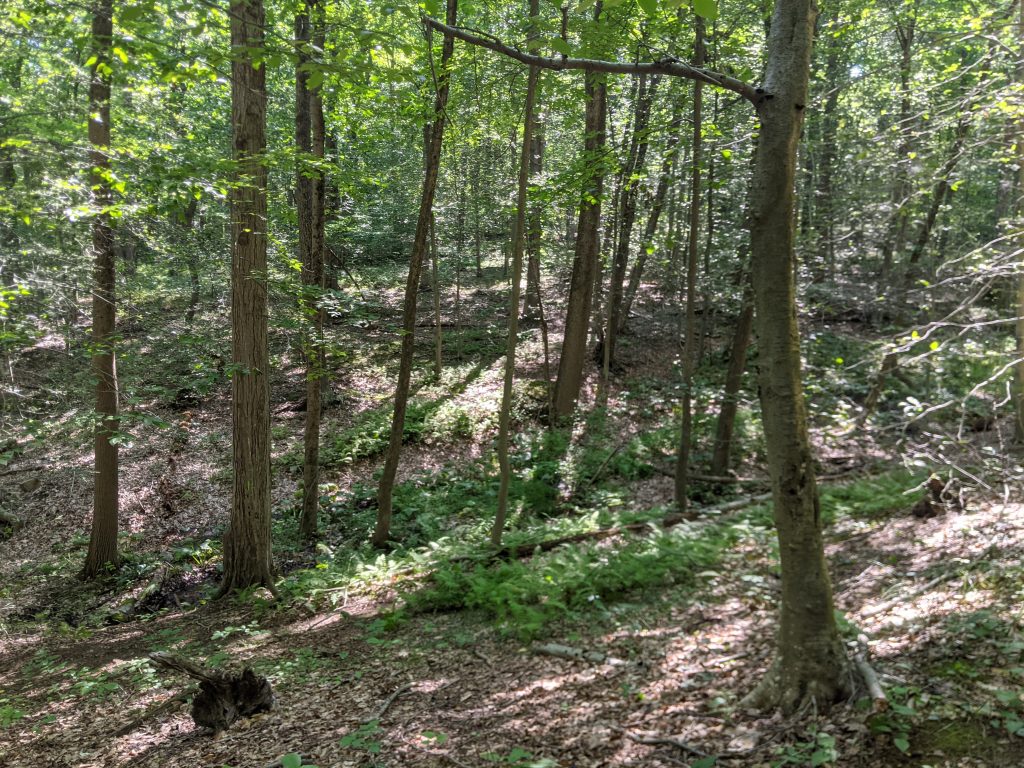 Upon reaching Wick Farm, I had to break my thoughts and figure out where the trail went.  As usual, I overthought it, and the answer was much more simple than I made it out to be.

I made it back to the car, and it was only 11:00.  It had been a great hike, but I still wanted more.  Checking the map, I figured I would add the 1.3 mile Primrose Brook loop trail. 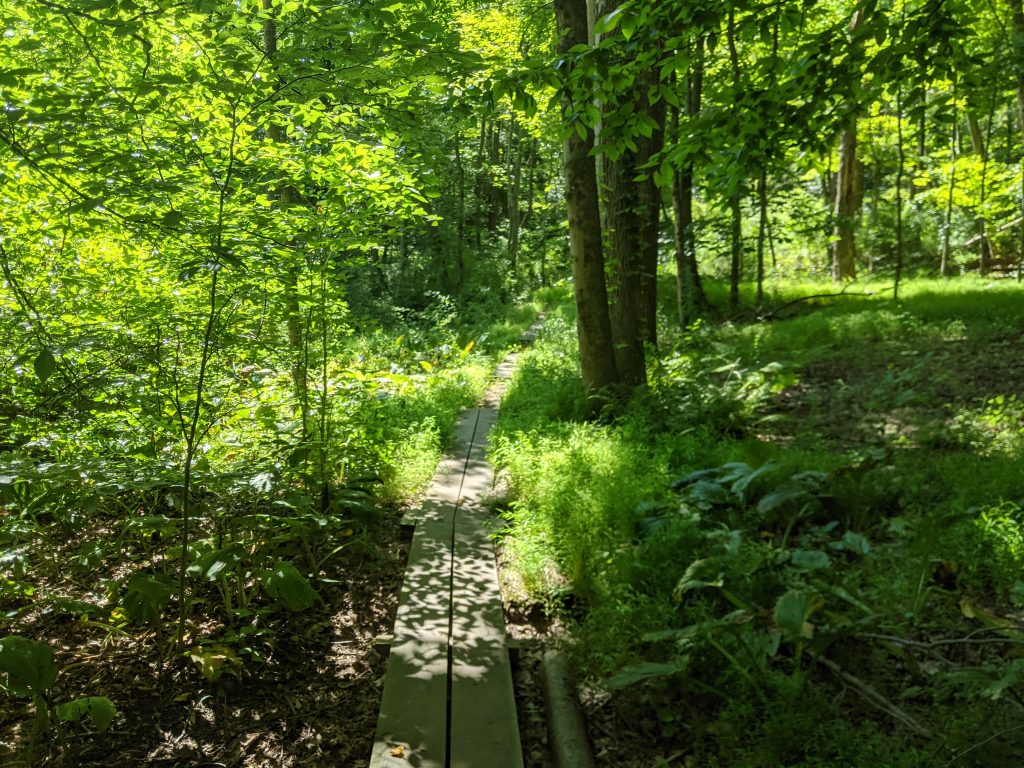 This is a nice trail that crosses over the brook numerous times, both on rocks and bridges.  I startled a Great Blue Heron that was wading in the brook, and he startled me with his size.

Overall, this was a great hike.  I’d like to come back and hike the Grand Loop Trail at some point, and that would probably complete all the trails.  After changing at the car I drove to the visitor’s center which was closed the last time I was here (no power) and took a walk around the interior.  They have nice interpretive displays about what I saw on the walk, and a really cool video describing the history.  And, I got my cancellation. 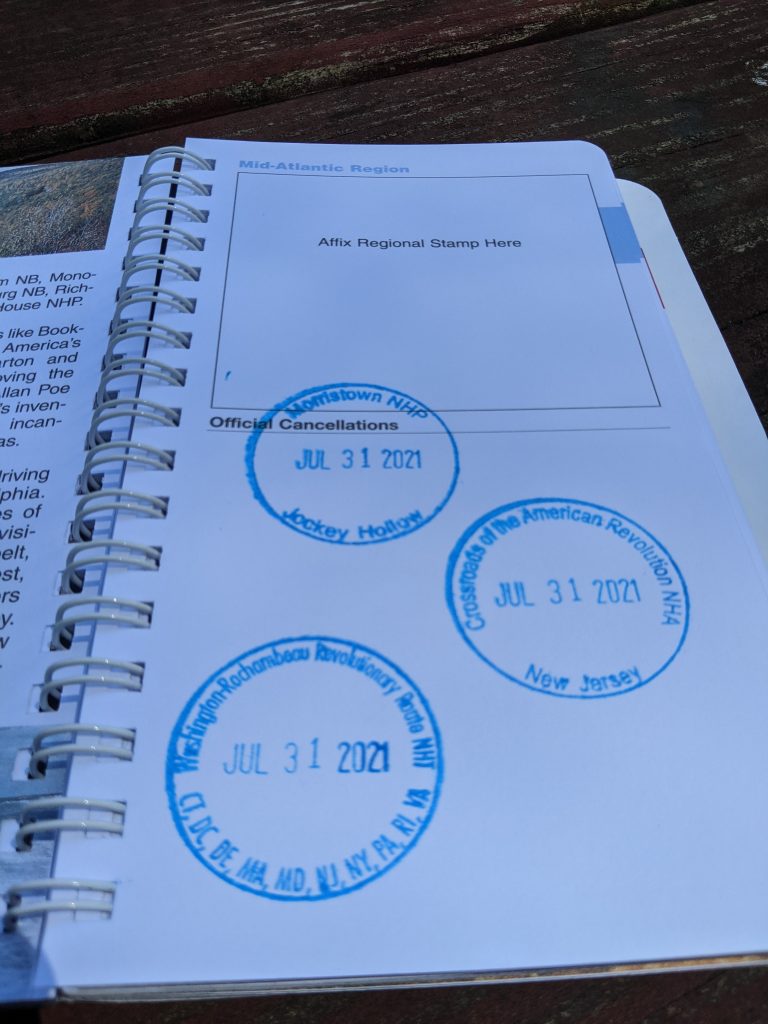 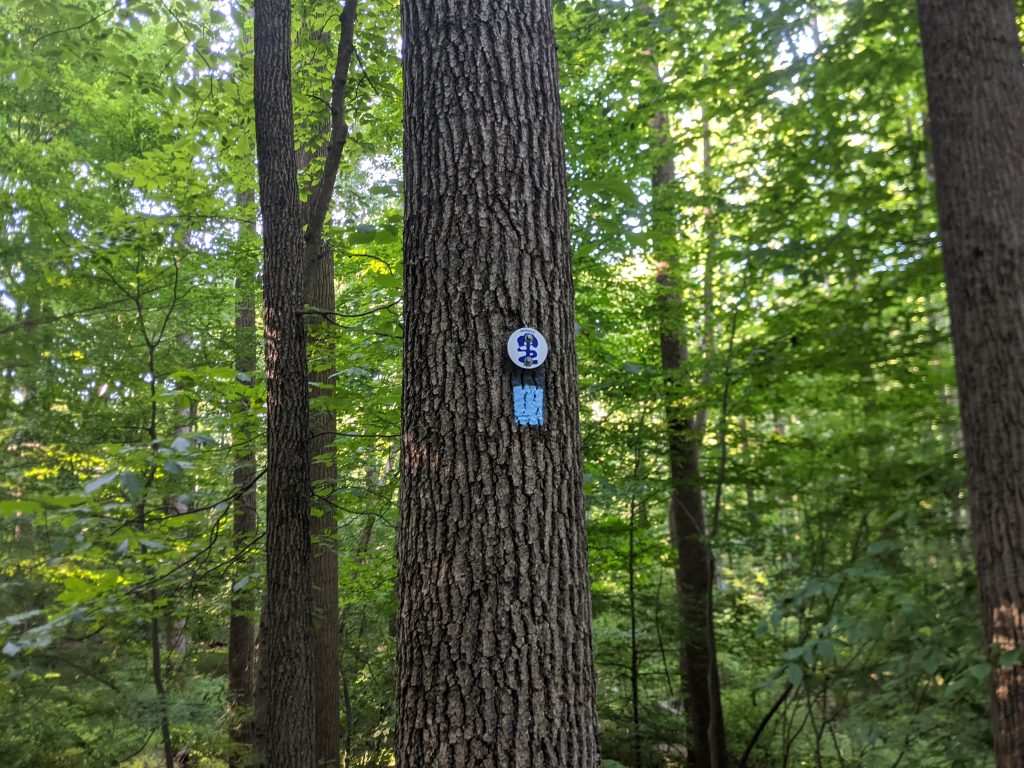 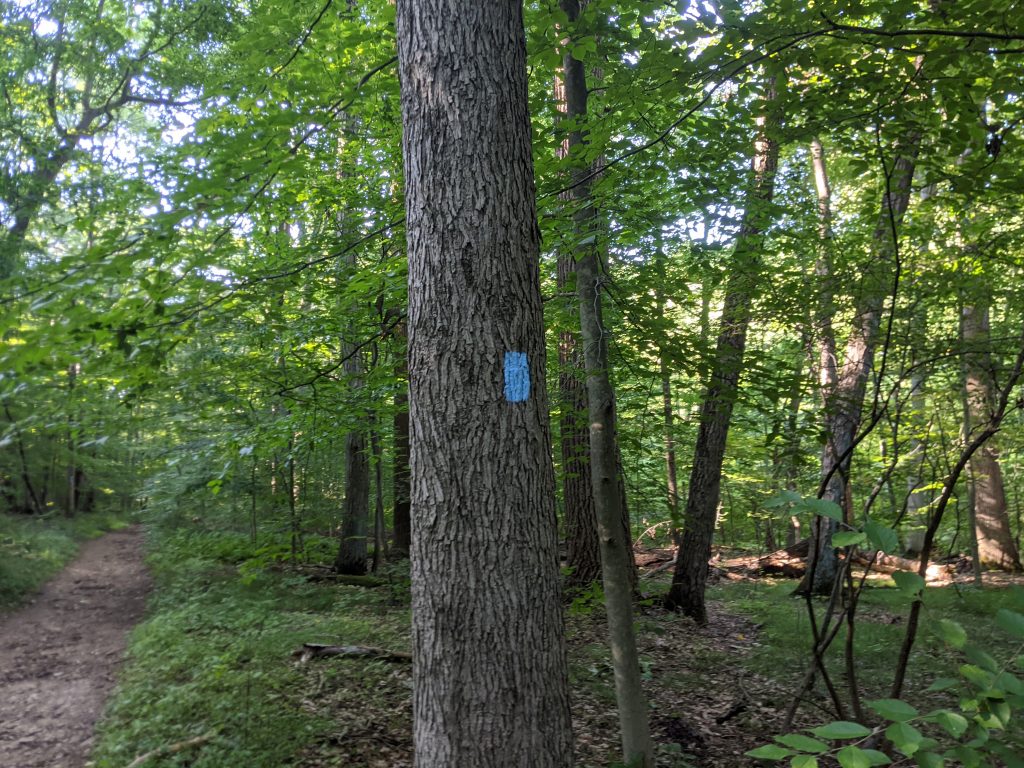 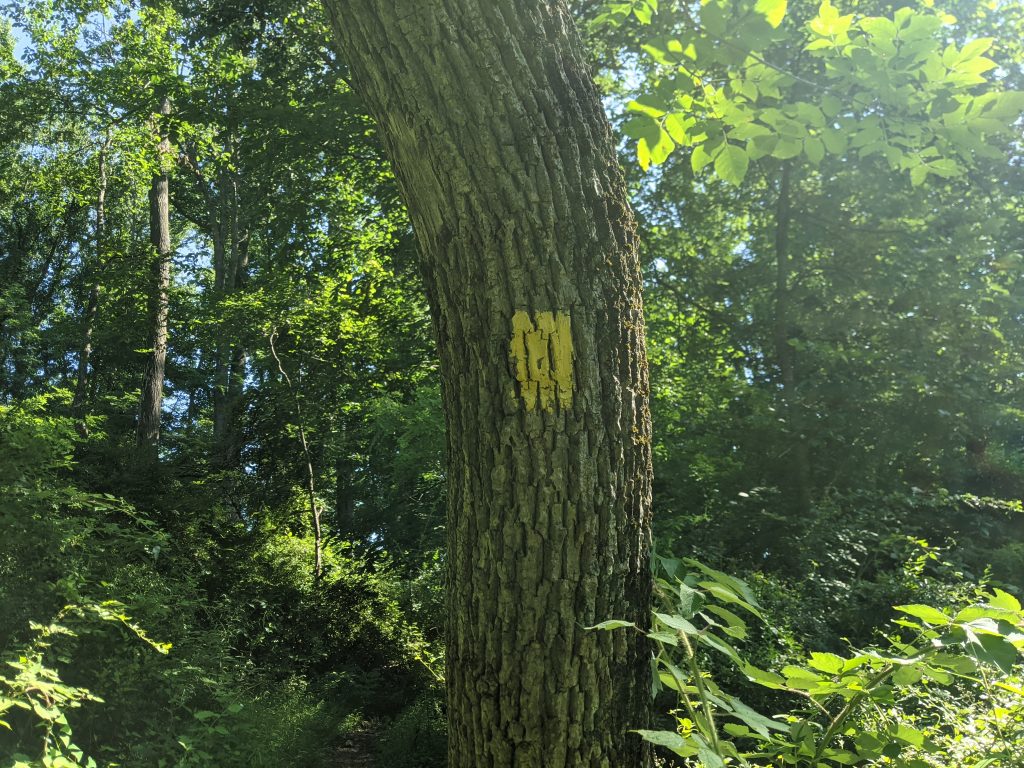 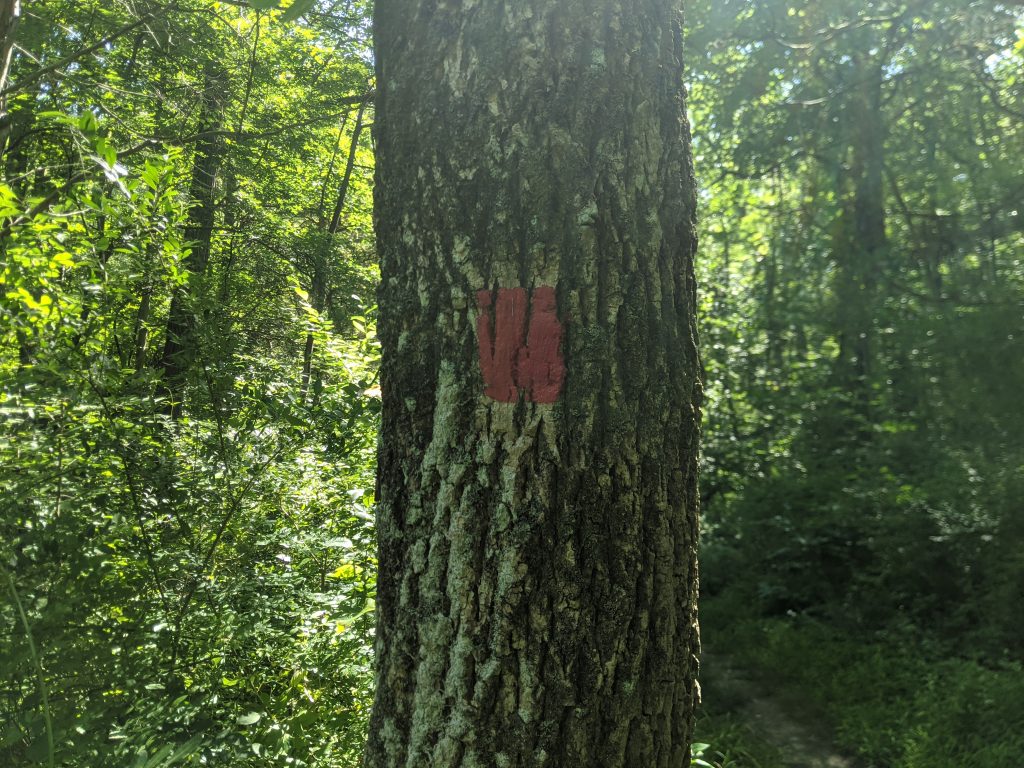