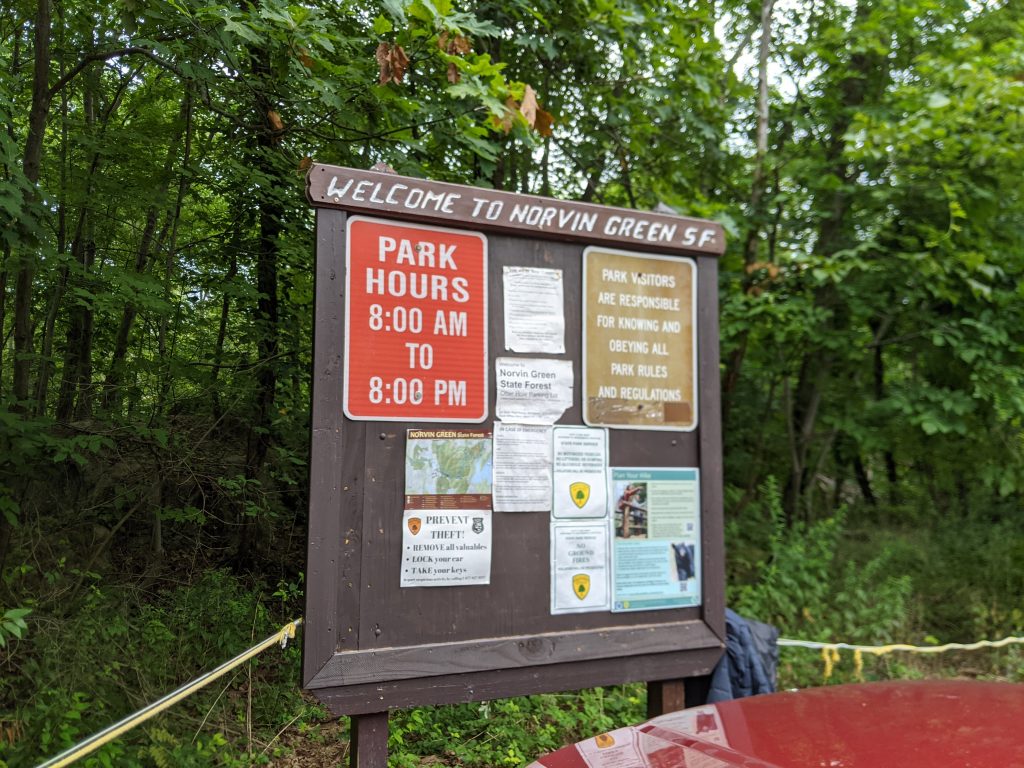 Trail Map – The map isn’t 100%.  There’s a new trail, blue with black dots, that routes a steep section of the Hewitt Butler trail.  The Hewitt Butler has been re-routed.  If you stay on blue, you won’t miss any junctions. 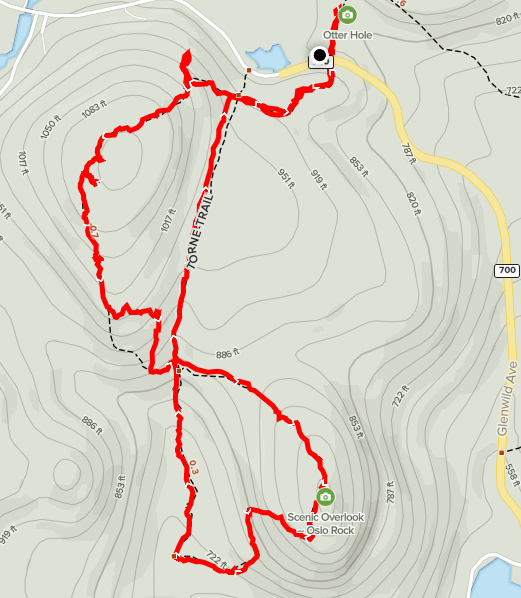 It started out bright and sunny, but clouds moved in for most of the day.  Knowing that I might not get out for a couple of weeks I wanted to do one more hike without adding much driving.  I knew this would be short, but not having to drive much made up for that.  I parked in the Otterhole parking lot, and snagged the last legal space.

I took the Hewitt Butler up, and the Torne down.  Hewitt Butler is a lot of climbing, not necessarily a bad thing.  On the way up, I came to a good-sized rock, and I didn’t think this guy was going to let me pass. 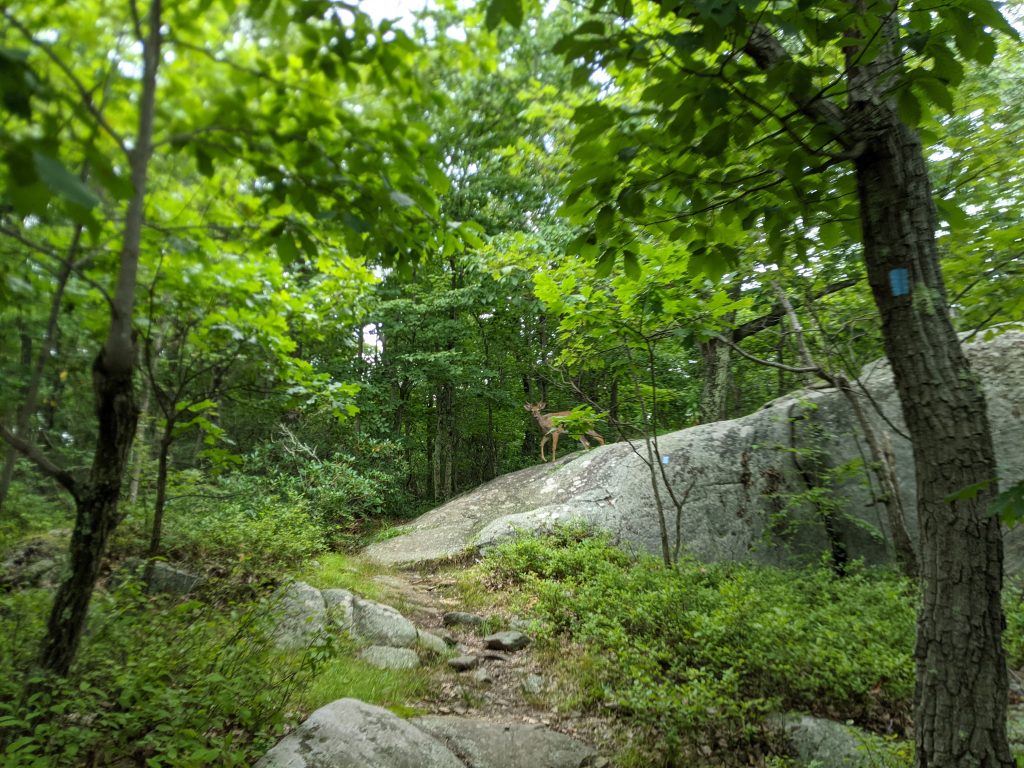 Both trails were really nice to walk.  The trails were either typical Jersey rocks, or nice and wide, flat, with soft dirt. 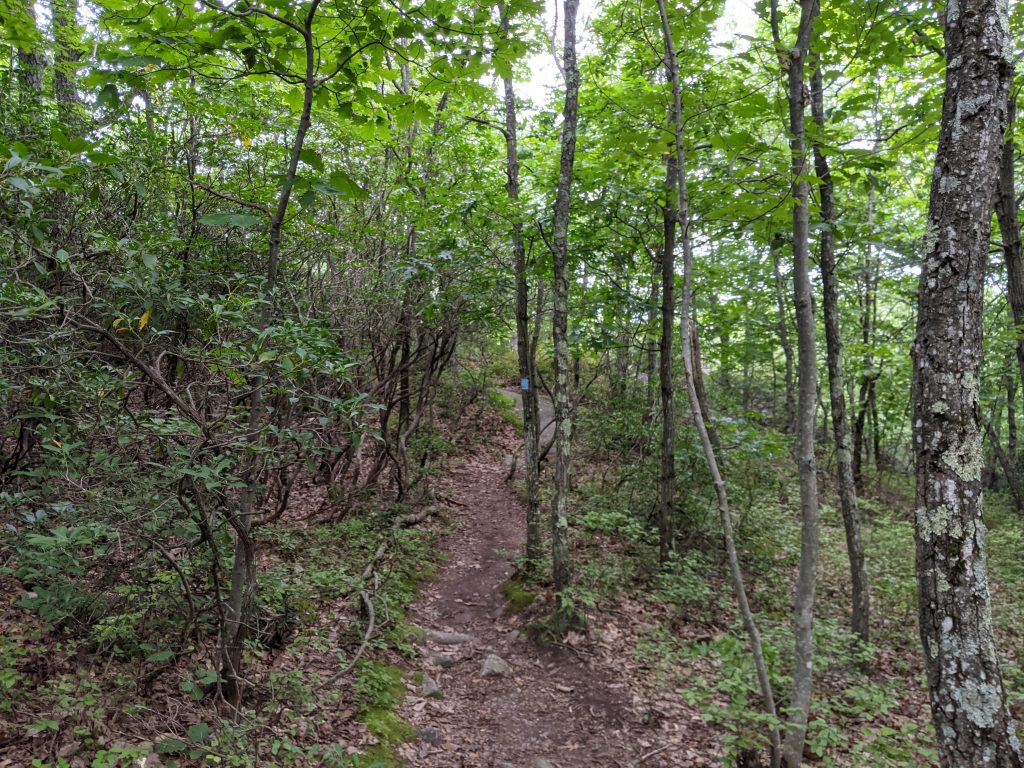 One thing I was looking forward to finding was the Stone Living Room, a Weird NJ attraction.  I’ve read about this in numerous issues and didn’t realize it was right off the Hewitt Butler.  You’ll know when you come to an open area and there is a cairn right by some bushes.  Push through the bushes and their is a small trail that leads right to the Stone Living Room. 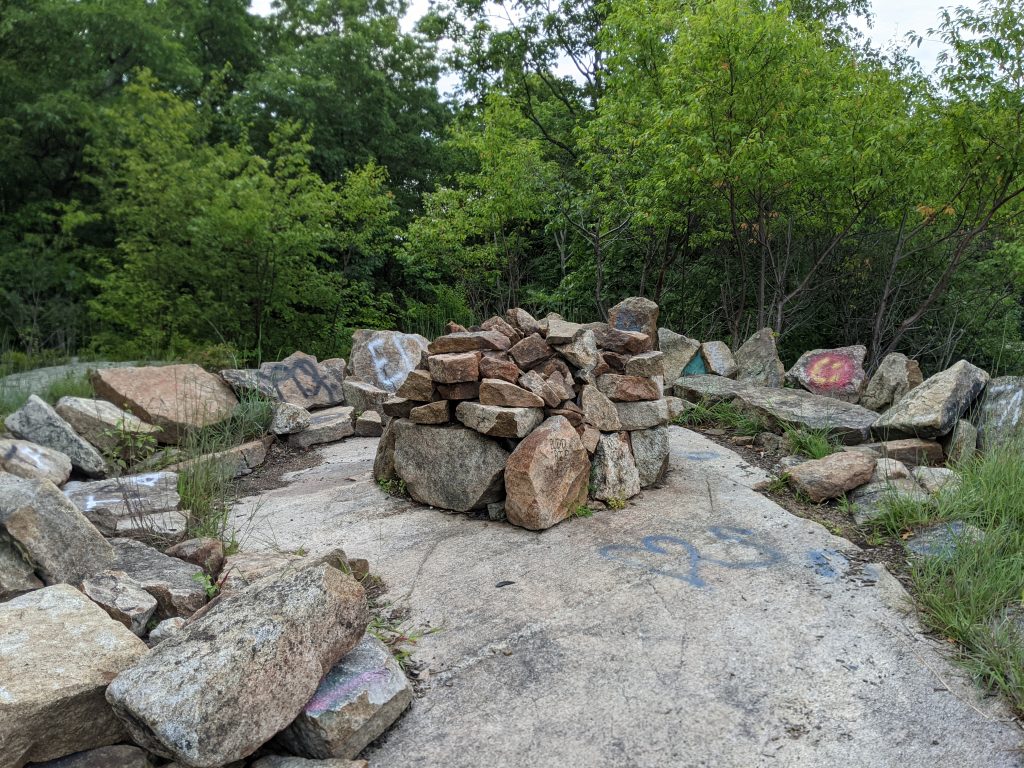 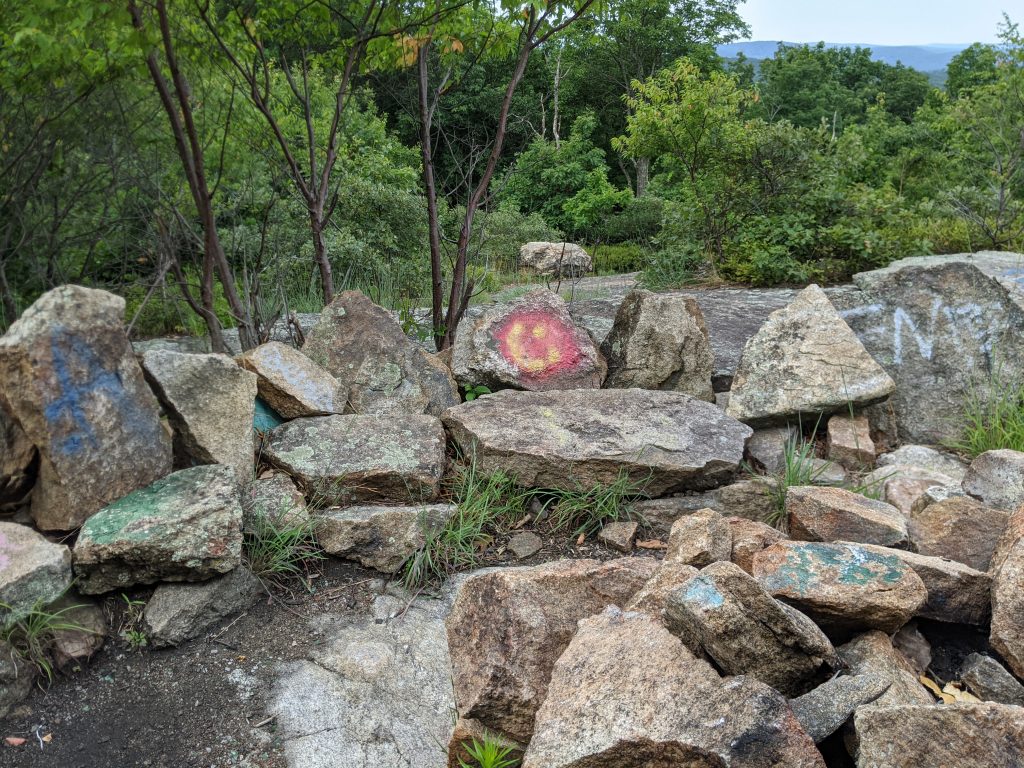 The view from the Stone Living Room is pretty darned good too. 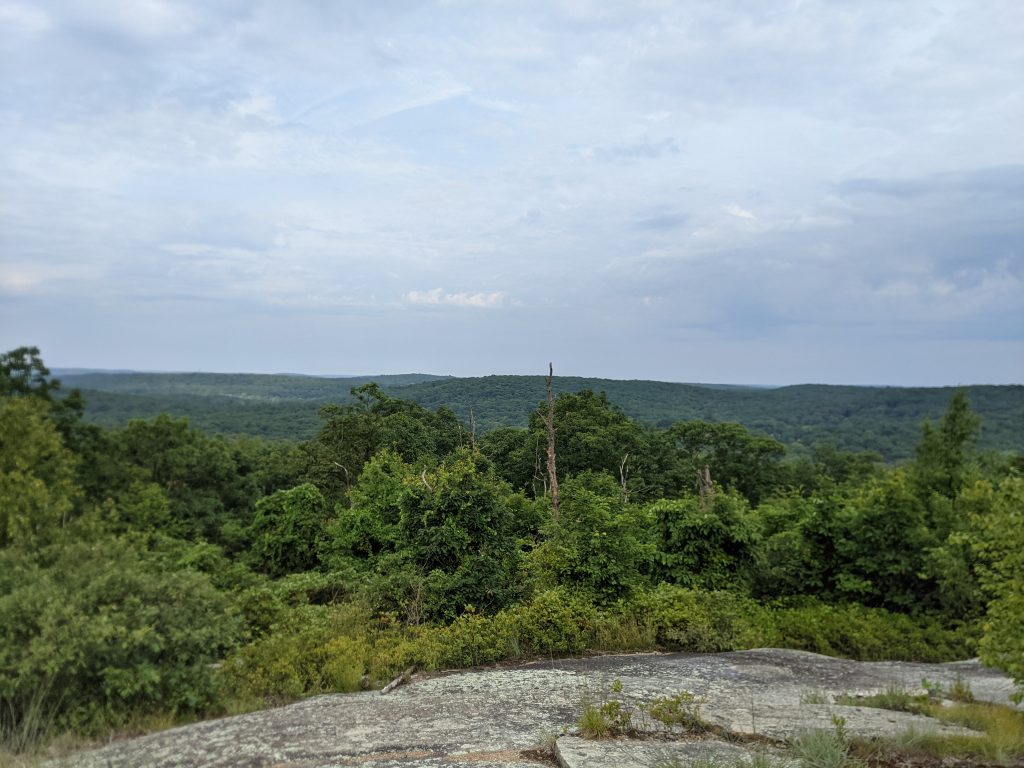 A little further down the trail you’ll come to a large rock with a stone bench on it.  From here you can see New York City, probably better without leaves on the trees or some of the haze. 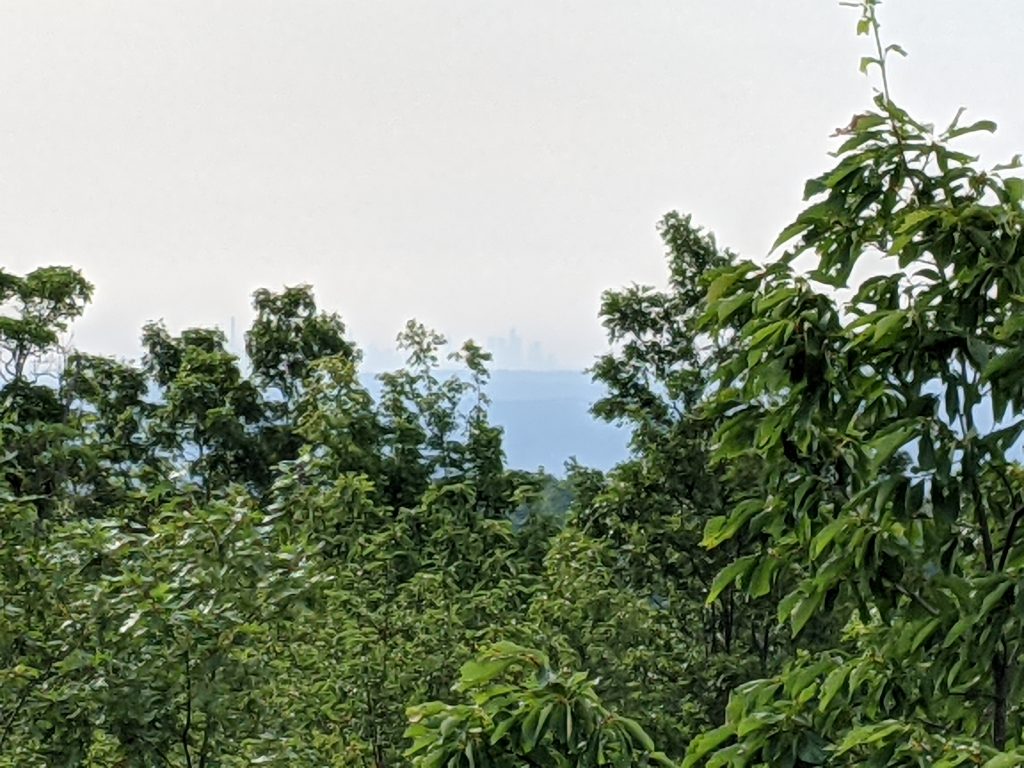 New York City was a lot more prominent with polarized sunglasses on.

After a steep climb, there will be a really big rock off to the right.  I thought this was Osio Rock, as I didn’t see anything else around.  And I knew that there were 360 degree views from the top.  I wasn’t scrambling to the top of this, and I hoped there was really more. 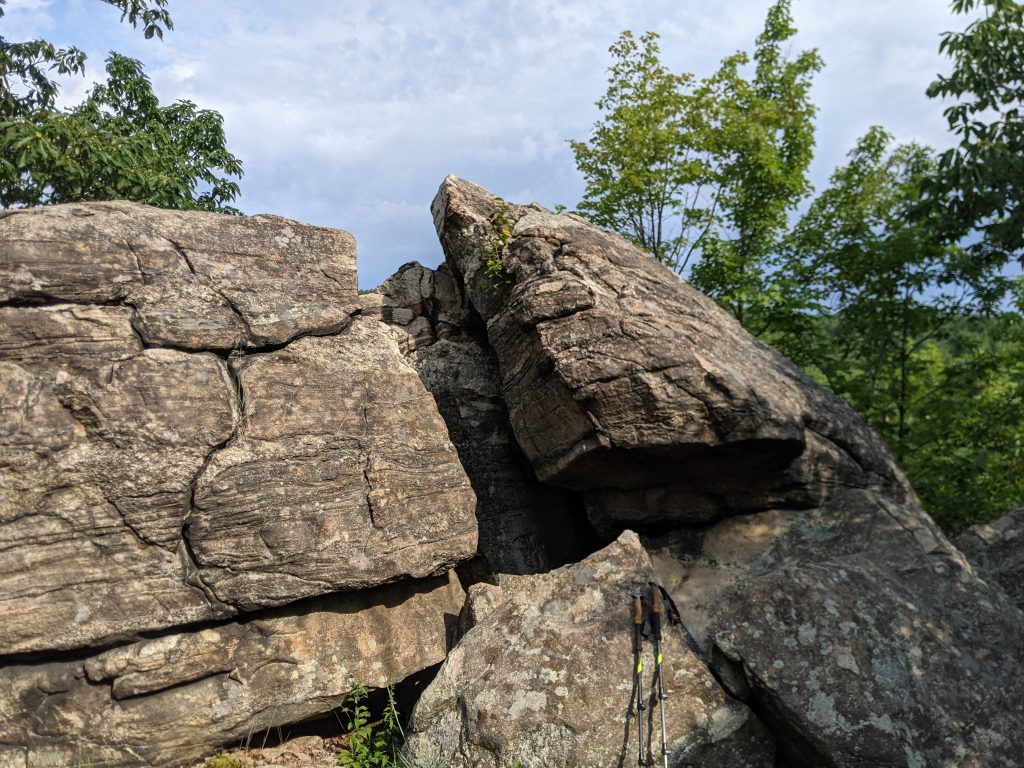 I needn’t have worried.  Further down the trail you’ll come to a small scramble, then you’ll know you’re on Osio Rock.  Views all around.  Except for some trees right on the top, it’s virtually 360 degrees. 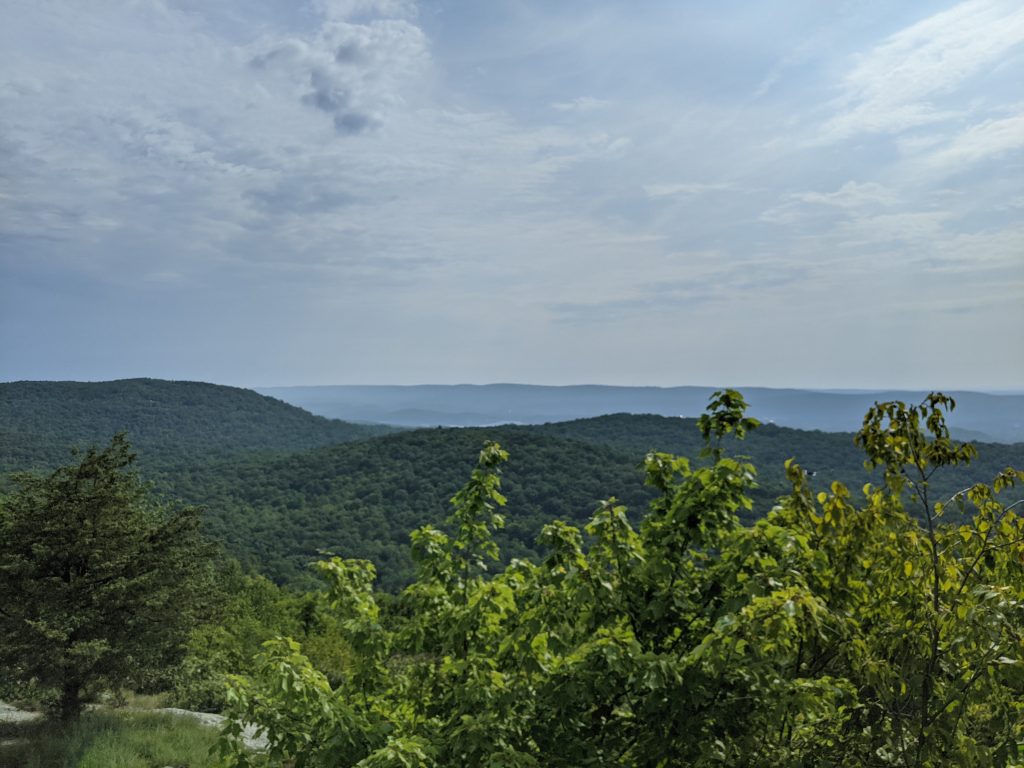 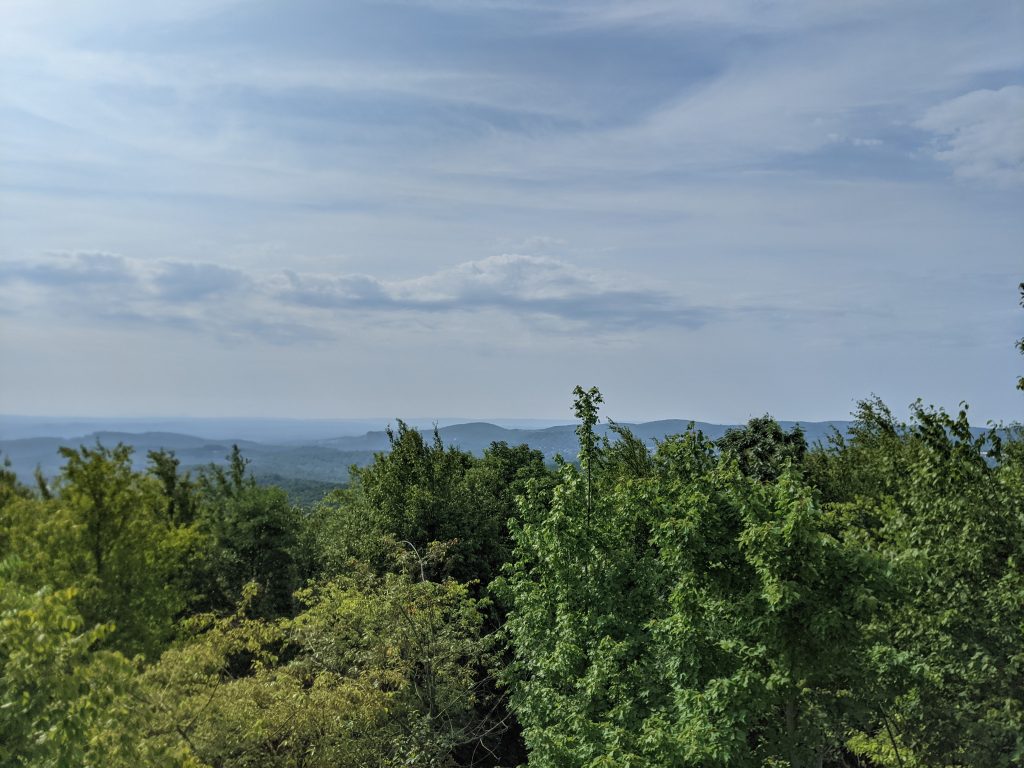 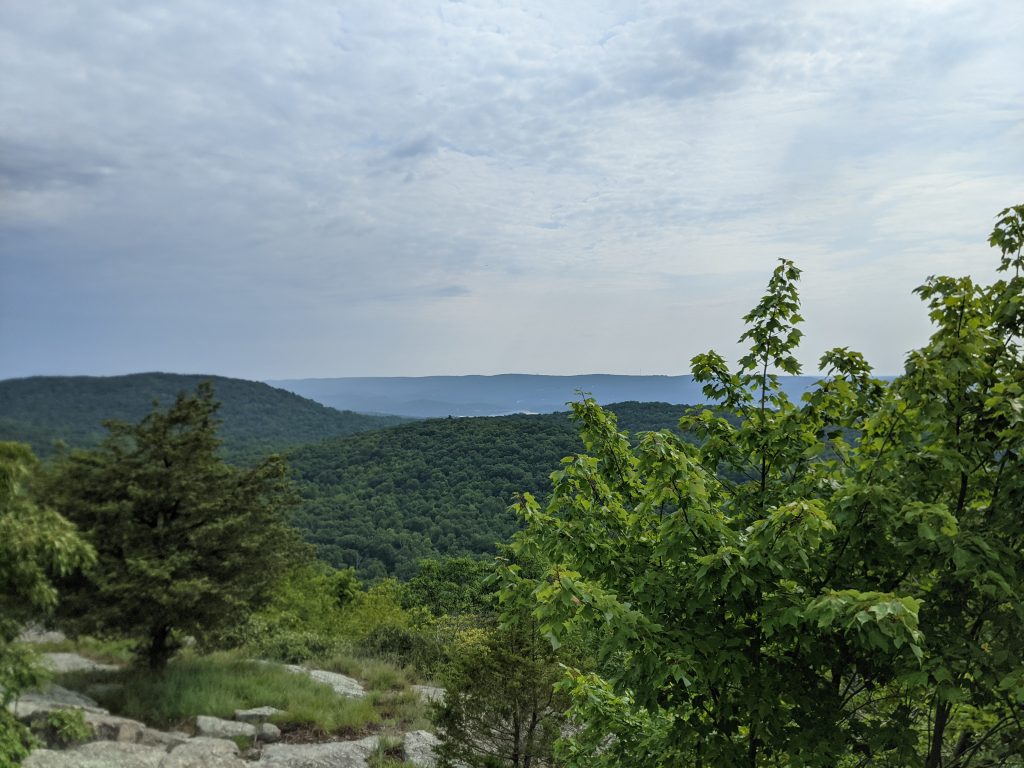 I stuck around for a while, I had it to myself; and I knew the hike back was not as long.  Again, you could just make out New York City.  Continuing on the Hewitt Butler trail, you have to scramble off the rock, and it wasn’t the easiest.  From here, the trail sharply descends.  Even though I saw no one on the trails today, I came across a spot where someone had dumped water bottles – which got packed up, but still.

The cool thing about these mushrooms is that they are growing INSIDE the tree.

Once you finish descending off Osio Rock, the trail levels out for much of the way back to the lot. 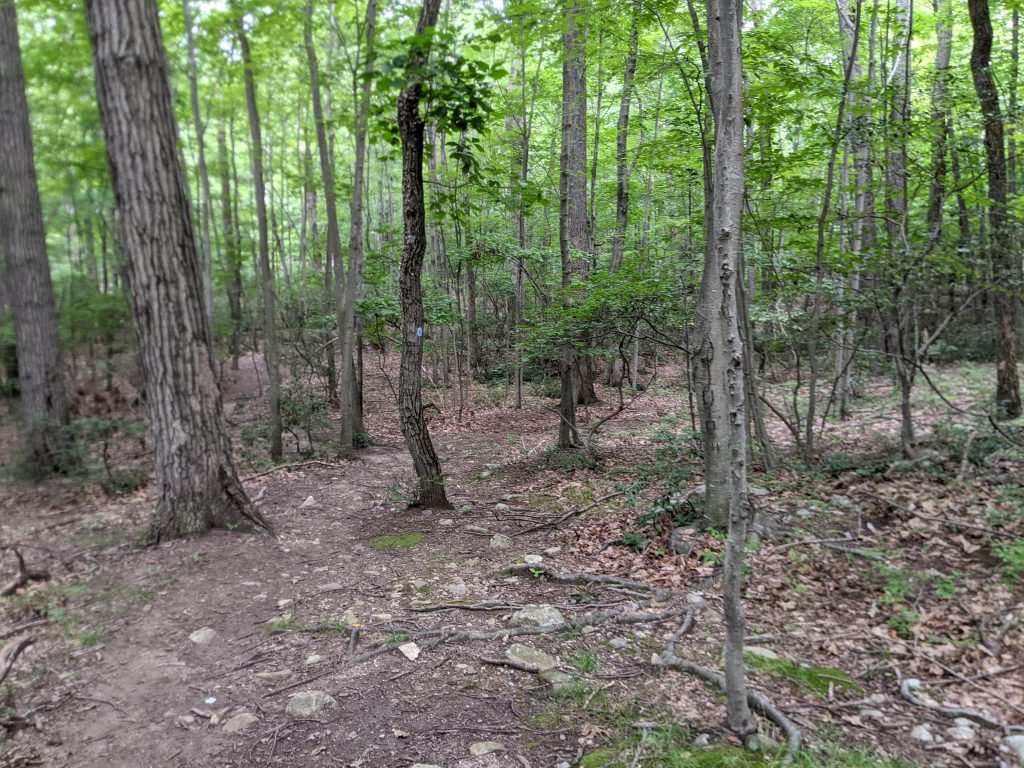 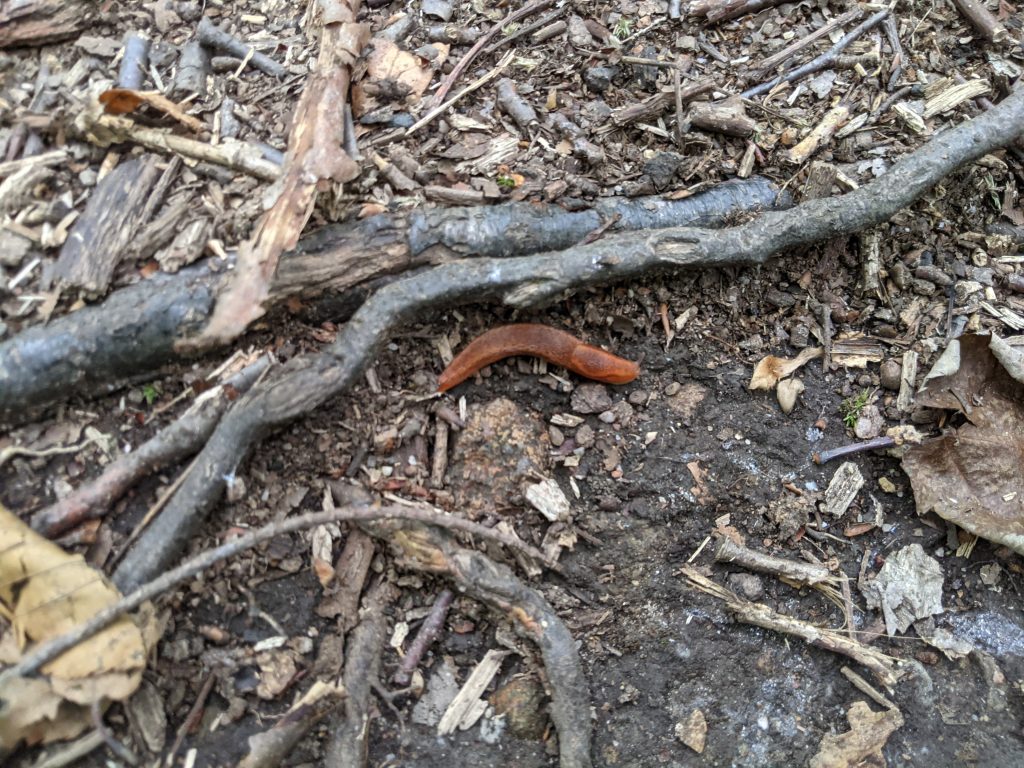 At the junction with the Torne trail (red), you’ll see a stream on your left.  Don’t bother crossing, it appears the Hewitt Butler used to continue south; but the trail is now closed. 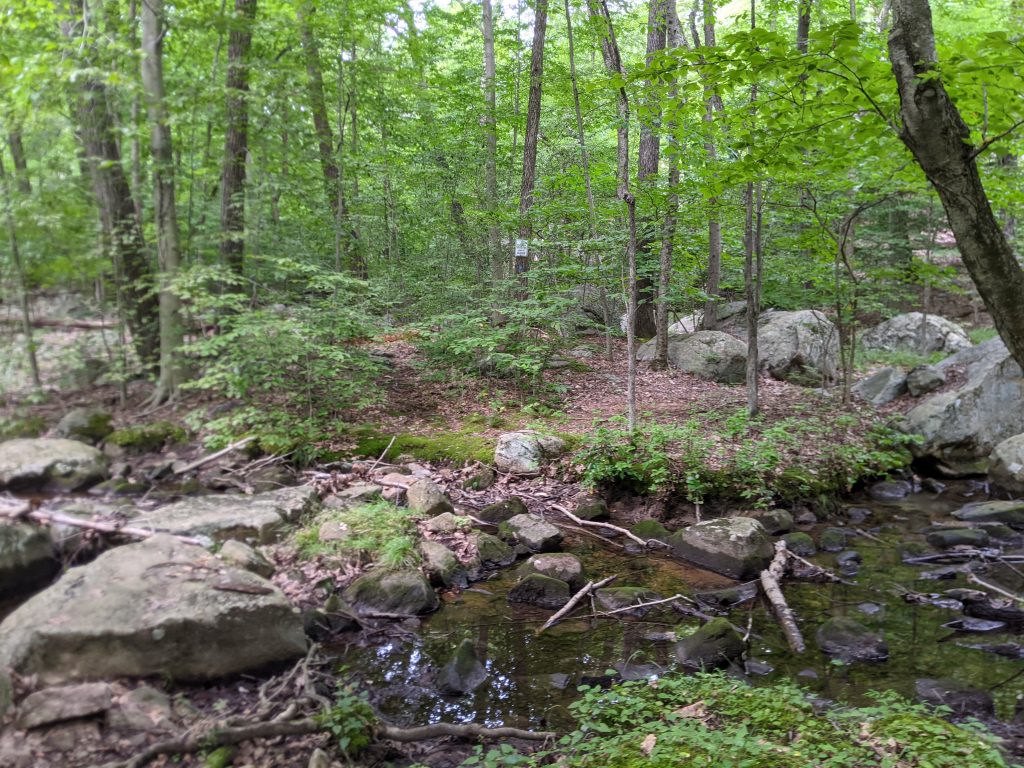 I took the Torne all the way back to where it initially junctioned with Hewitt Butler.  There is one section (right in the middle of the two trails figure eight) where there is a scramble, while on the Torne, that is not the easiest.  It’s not high, but I had to pull myself up the rock.  That, or I picked the worst way up.  After that, it’s a straight shot, and doesn’t take long at all.

Looking to add a little more, I crossed the road where my car was, and headed to the Otterhole.  I’ve been to the Otterhole before, but from the other side.  There wasn’t as much water this time, but I did find a new trail companion. 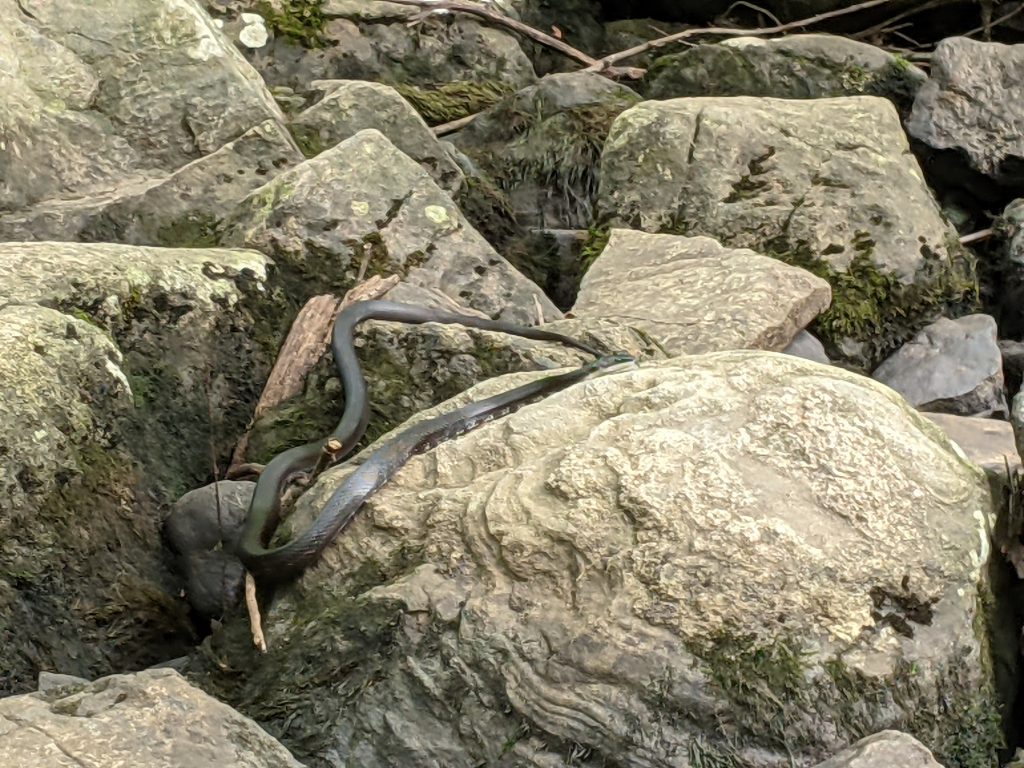 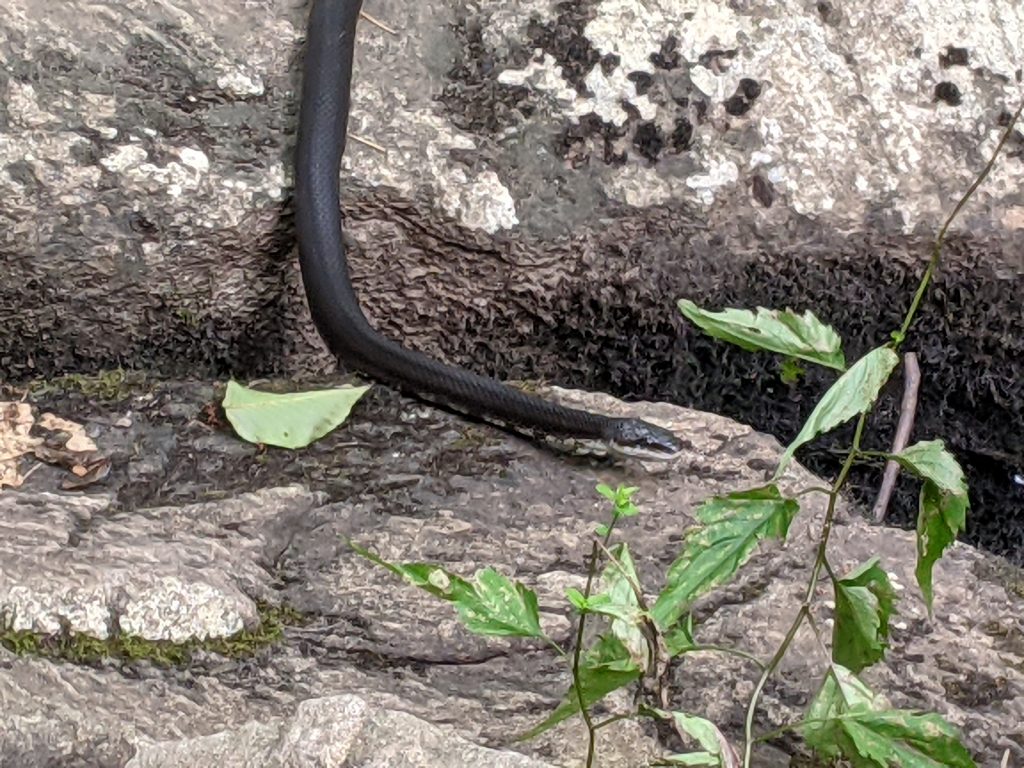 And with that, I’ve completed almost all of the trails in Norvin Green.  This is truly a fabulous place to hike; it really has it all:  climbs, views, water, long trails.  It can get crowded, especially at the “attractions,” I got lucky today and didn’t see anyone on my section of trails. 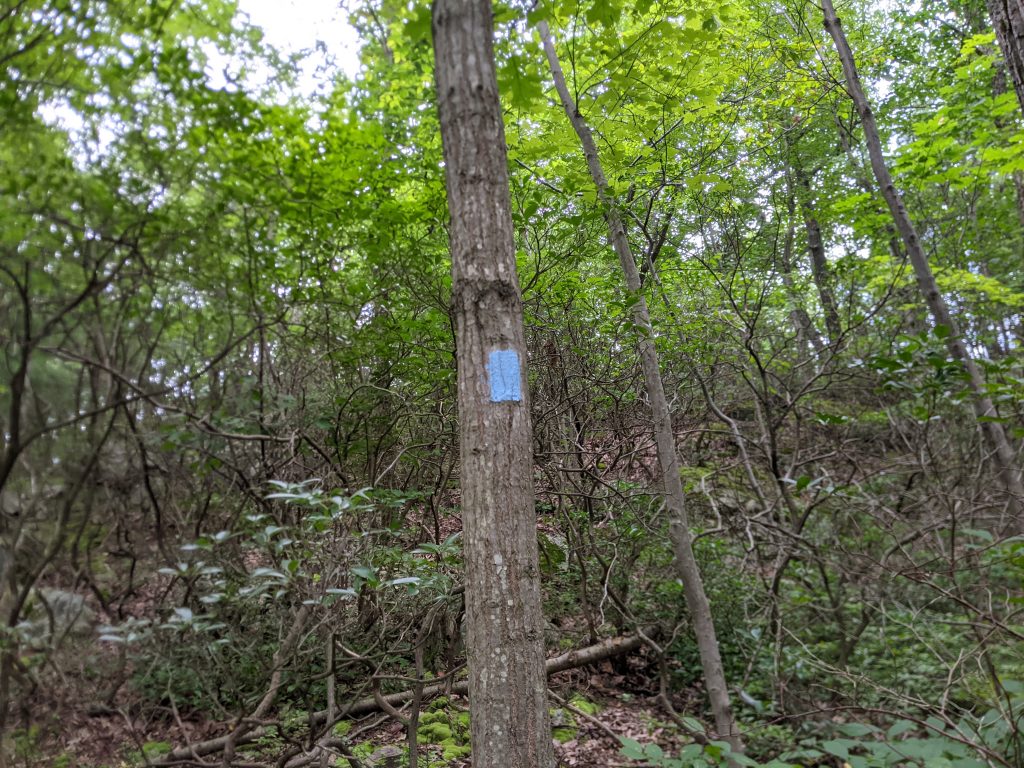 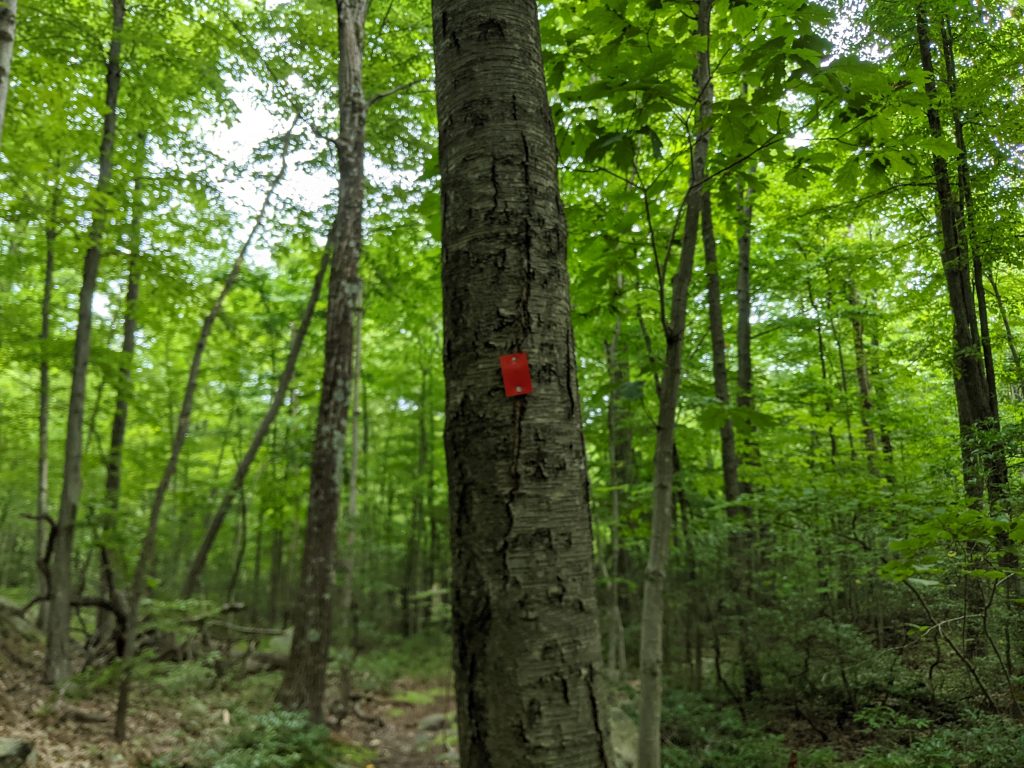