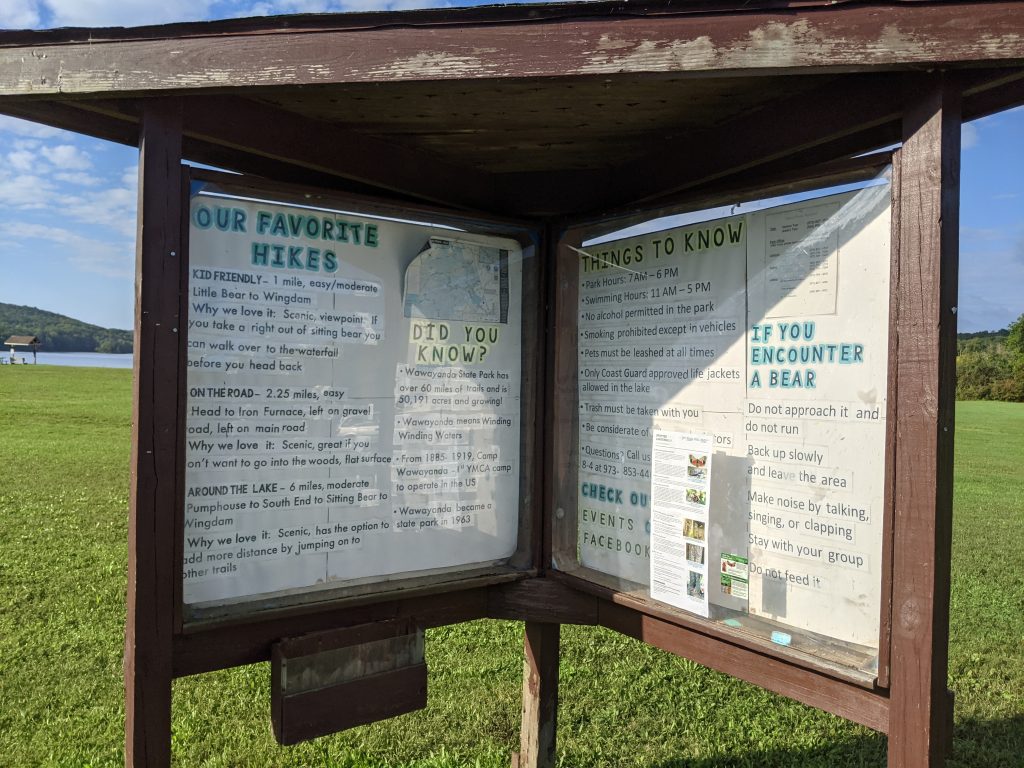 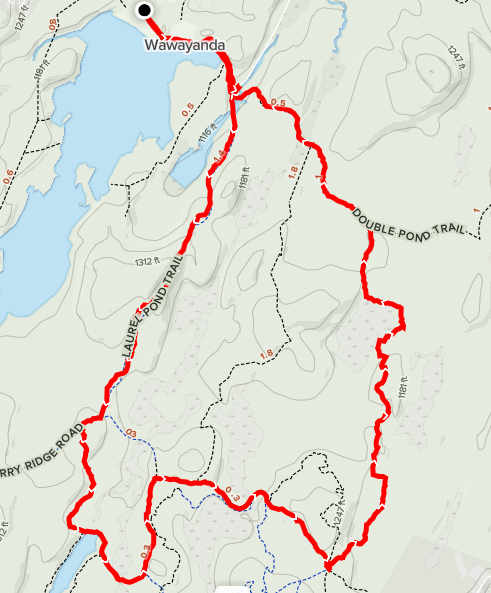 A gorgeous day to start; 69 degrees, warming up to the mid 70s.  It was mostly sunny for most of the hike.  I had wanted to do this clockwise, however the first junction was where two yellow-blazed trails met.  I chose incorrectly.  However, going counter-clockwise left me with the Cedar Swamp trail for the end, a nice way to end a brutal day.

Note:  What really marred this hike was the sheer number of mosquitoes, and I don’t mean a few here and there.  It was brutal.  For the entire hike (except by the beach at Wawayanda Lake where a breeze existed) I was walking in a cloud of mosquitoes.  And if I stopped to take a picture….the swarm landed on me.  It was real bad.  I applied mosquito repellent…twice.  That only afforded a little respite.  If some pictures are a little out of focus, well, that’s because I was fighting being carried off.

And, this could have been a great hike, with minimal elevation gain and lots to see.  The mosquitoes really killed it.  And, a mountain bike race took place on some of the trails.  Nothing like being run off the trails a couple of times.  And to top it off, on two trails I encountered motor bikes; so much for the silence.

Bring a map; there are multiple unmarked side-trails.

First stop was to the furnace, which is all that is really left of the ironworks that existed at one time on the property. 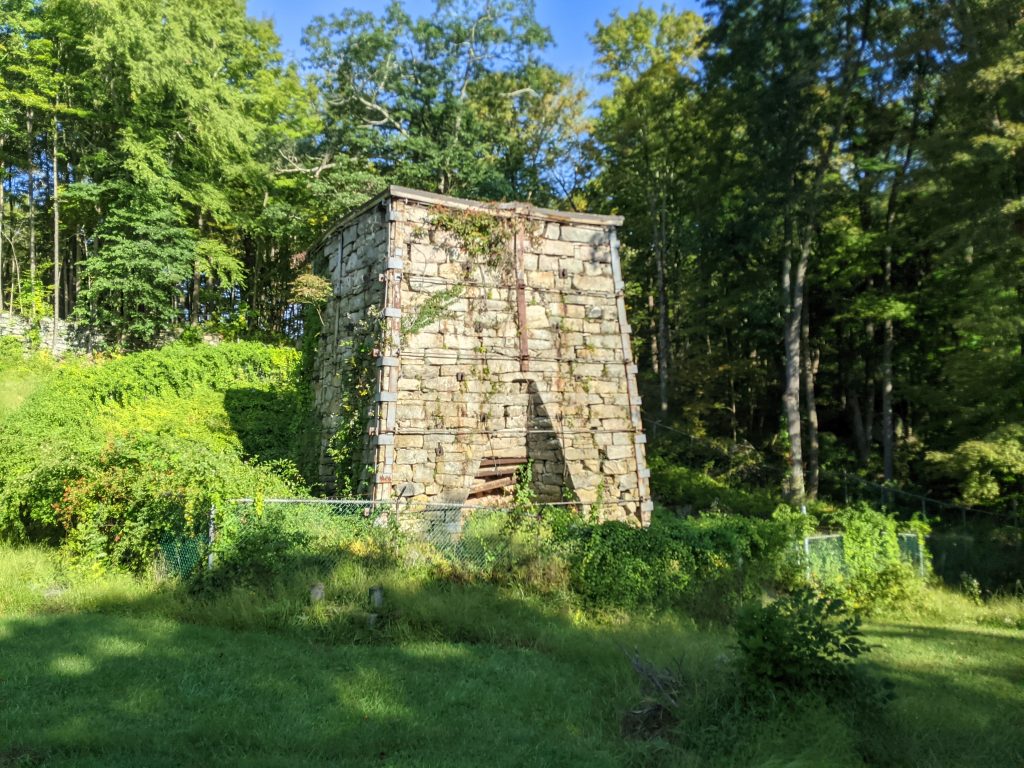 Across the street from the furnace was a pretty quick moving stream. 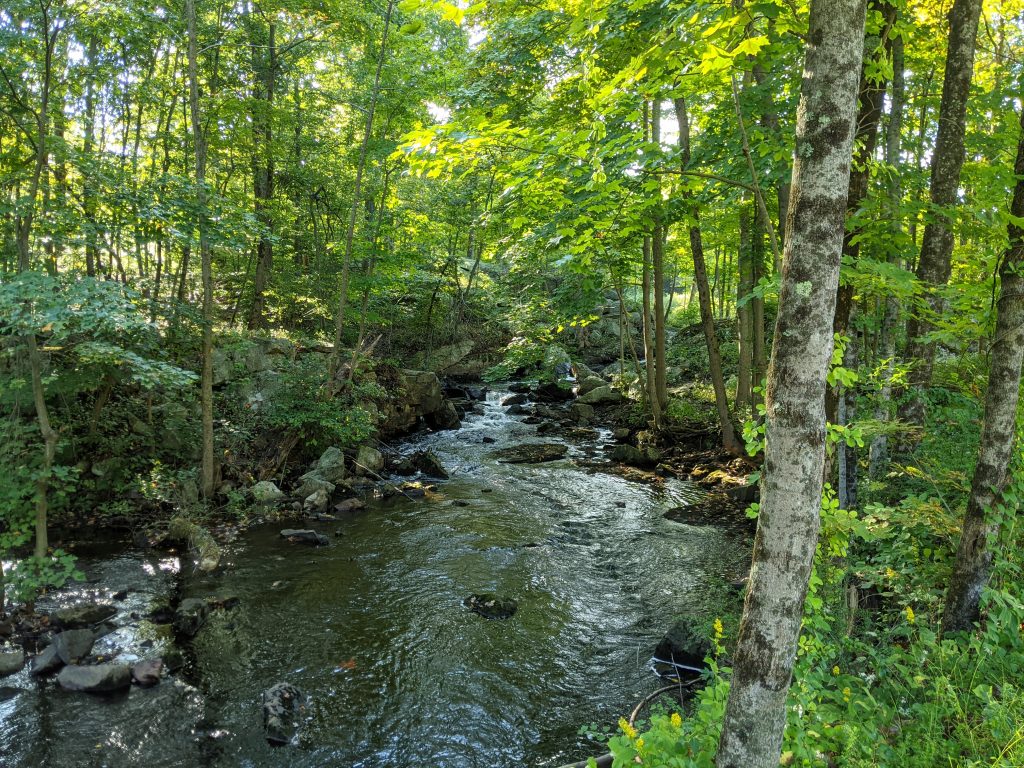 Still no mosquitoes.  But that would end shortly.  After choosing wrong, I headed into the woods.  The trails at this point were nice and wide, with nice soft footing, and not too many rocks. 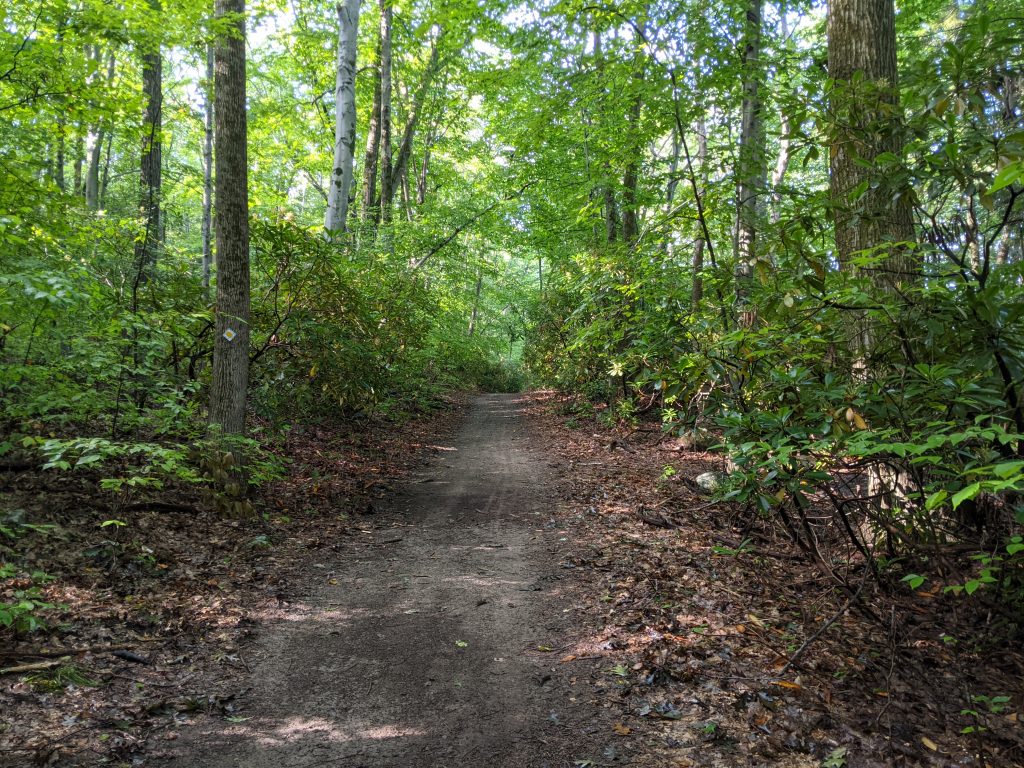 But that’s where the assault would come.  You can tell by the focus on this mushroom. 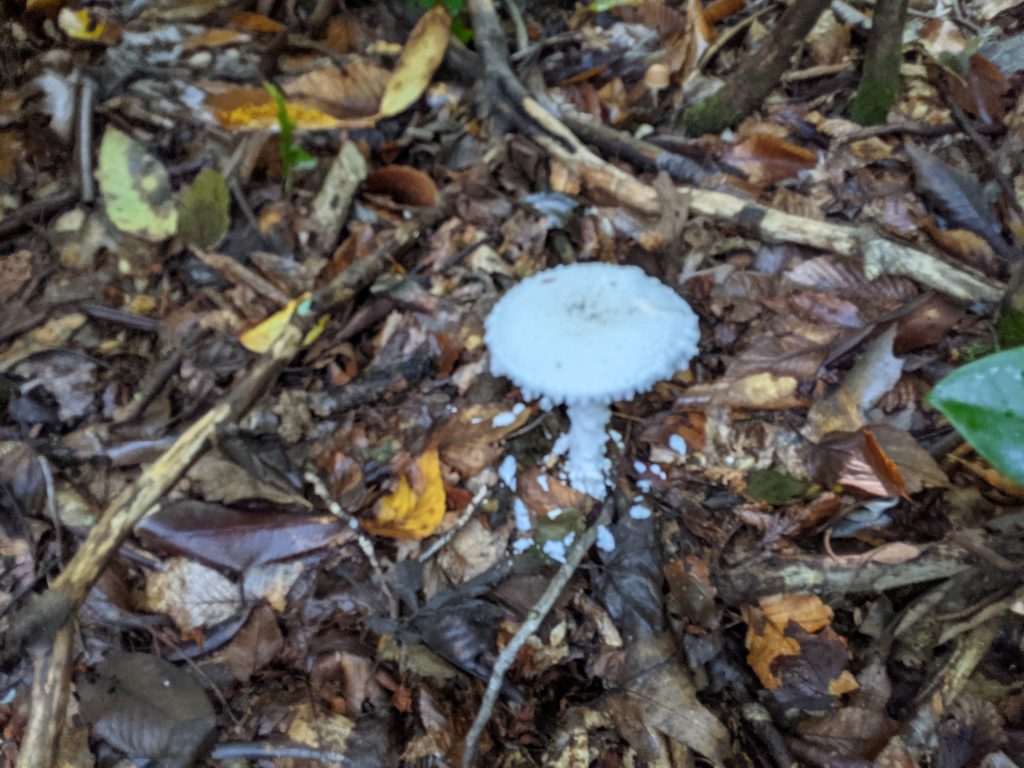 Same with this one. 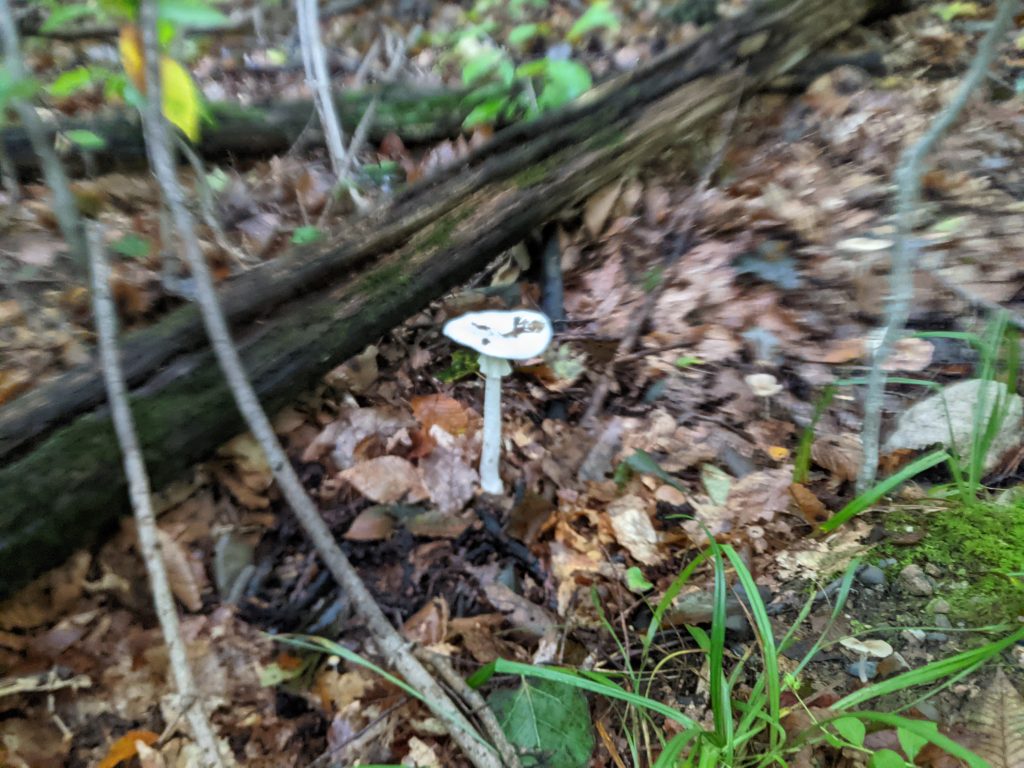 I had to drop the poles, whip out the camera, compose and focus as best I could – then take the picture and get out.

Once I got on the Lookout trail, I lost the nice wide soft trails in favor of something a little more rugged.  Still mosquitoes though.  I stopped by Lake Lookout to grab this picture. 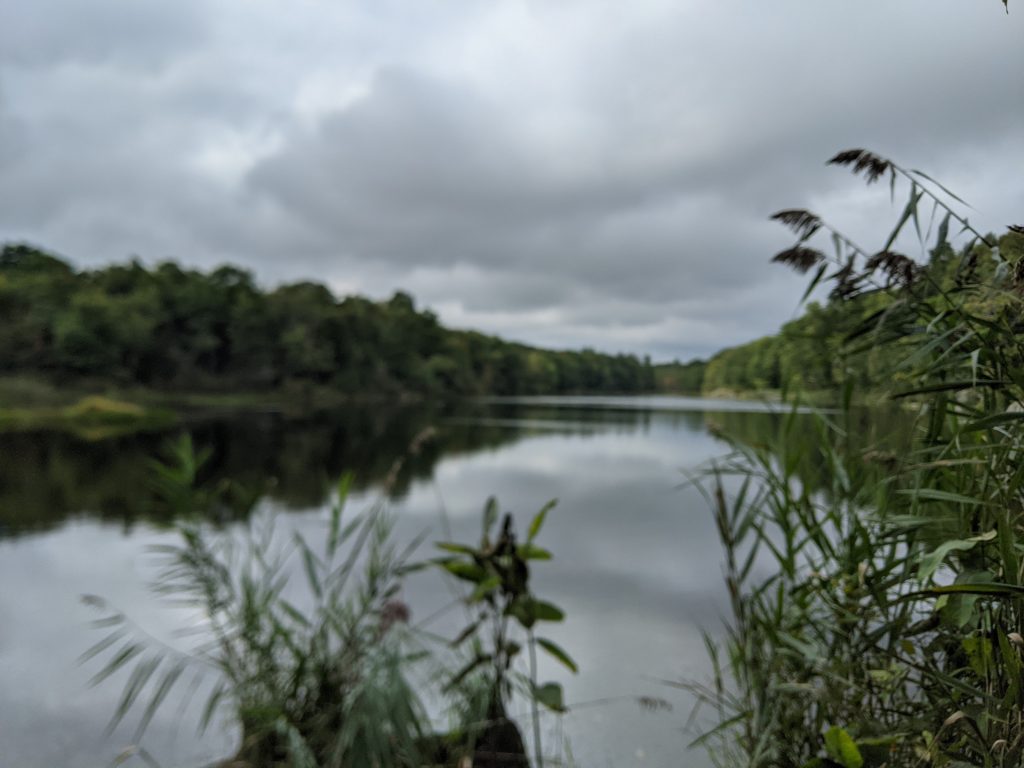 This is a little blurry, but not due to mosquitoes.  A whole bunch of bikes raced by, and I was trying not to end up IN the lake; though it might have felt good.  This would have been a great place to stop and have something to eat.  But, you just could.  not.  stop.  Or, you would have been fodder for the mosquitoes.

One of the signs I looked forward to seeing is below. 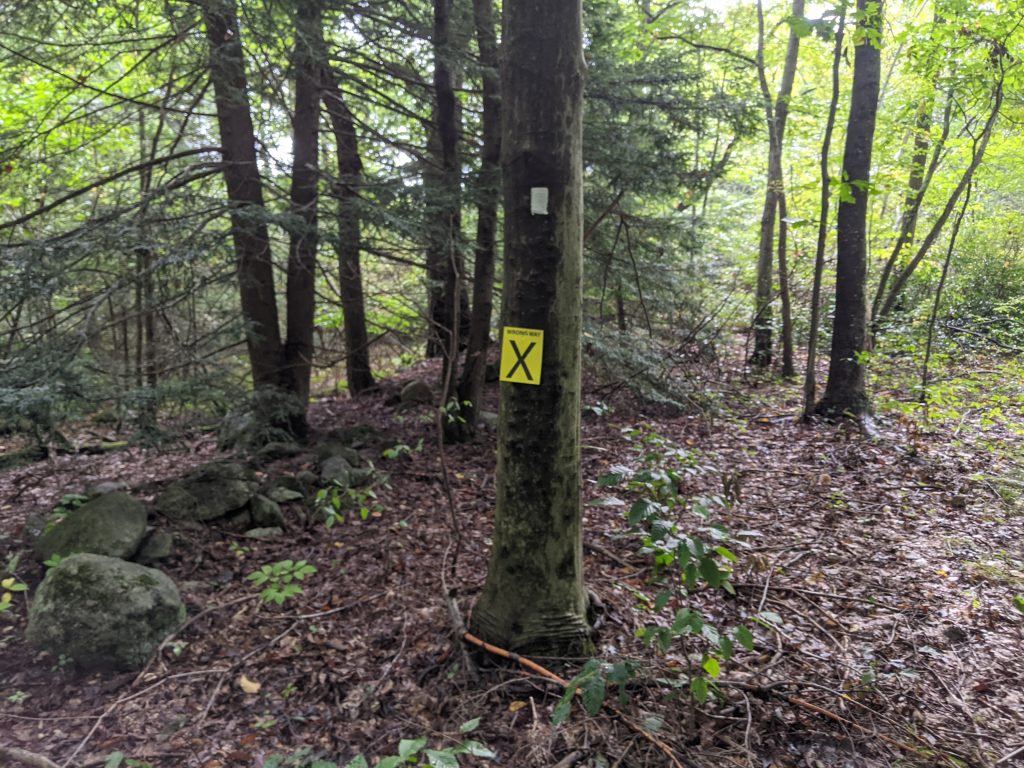 The point of the sign is to tell the riders that their course was not down this trail.  Seeing the sign meant I would have a few minutes of peace and quiet, only to swat mosquitoes.  I wouldn’t be constantly dodging bikes.

If they were red…I could have asked Mario to power me up.  Alas. 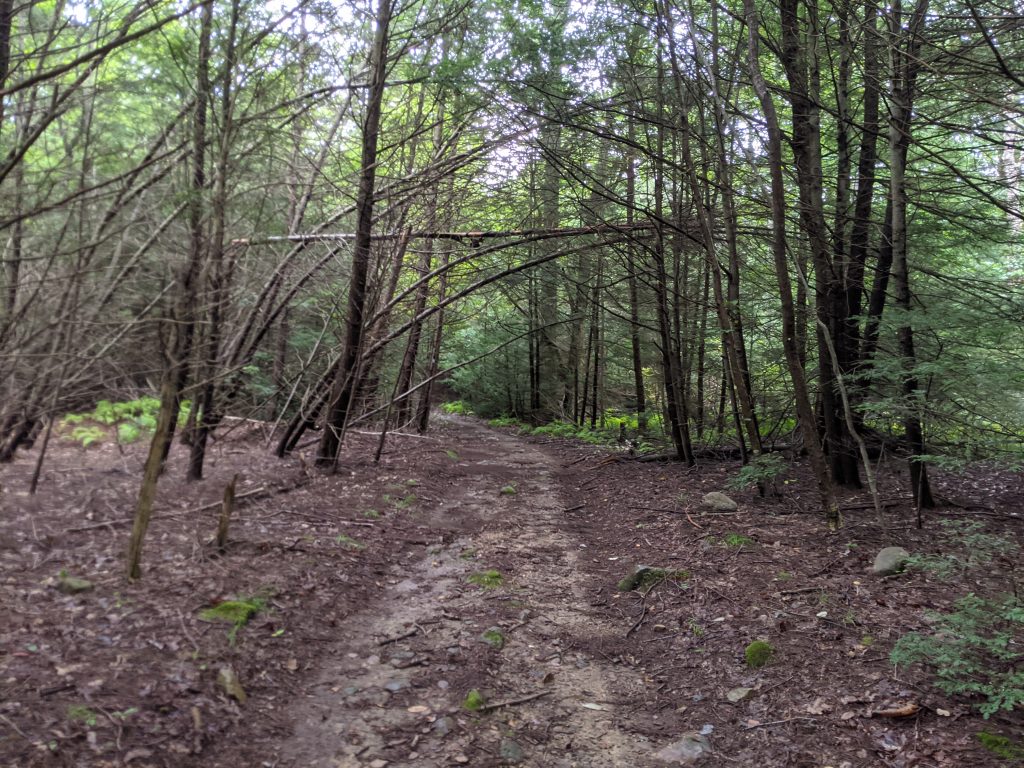 Towards the end of the day I made my way to the Cedar Swamp trail.  This trail is almost one and half miles of a rhododendron tunnel.  Here’s a picture of the beginning. 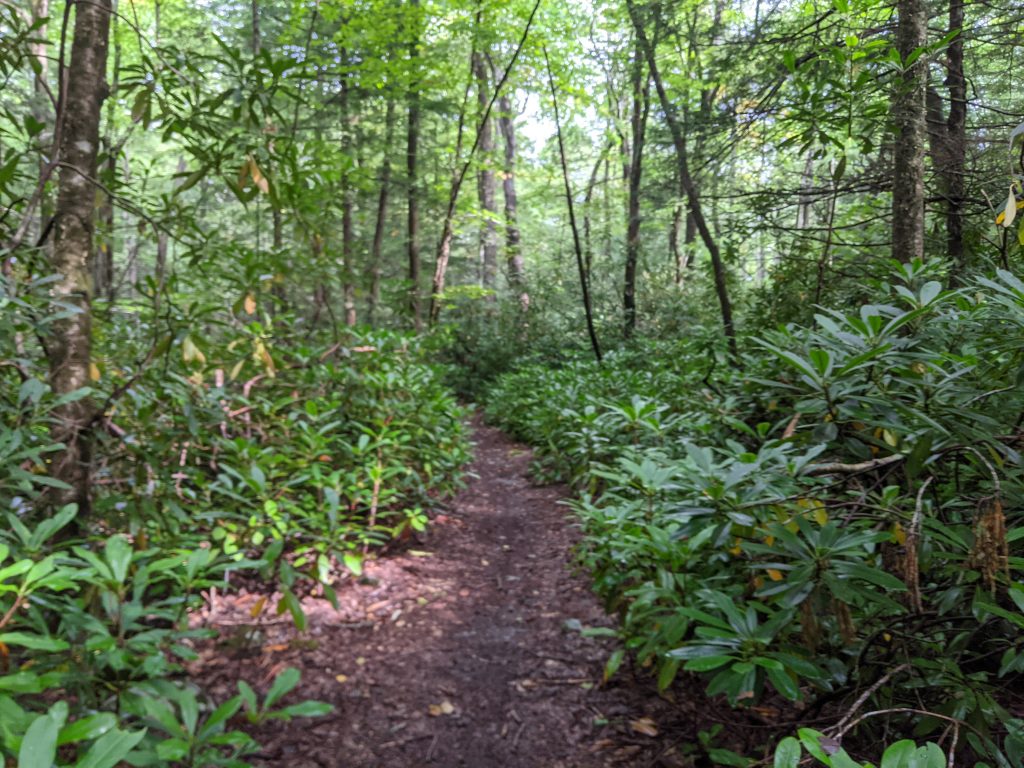 The picture doesn’t do it justice.  There were sections where the rhododendrons fully went over you in true tunnel fashion.  A couple of wet sections exist that you will cross on rocks with frogs scattering in all directions.  I ran into two other hikers coming against me, one with full mosquito netting. 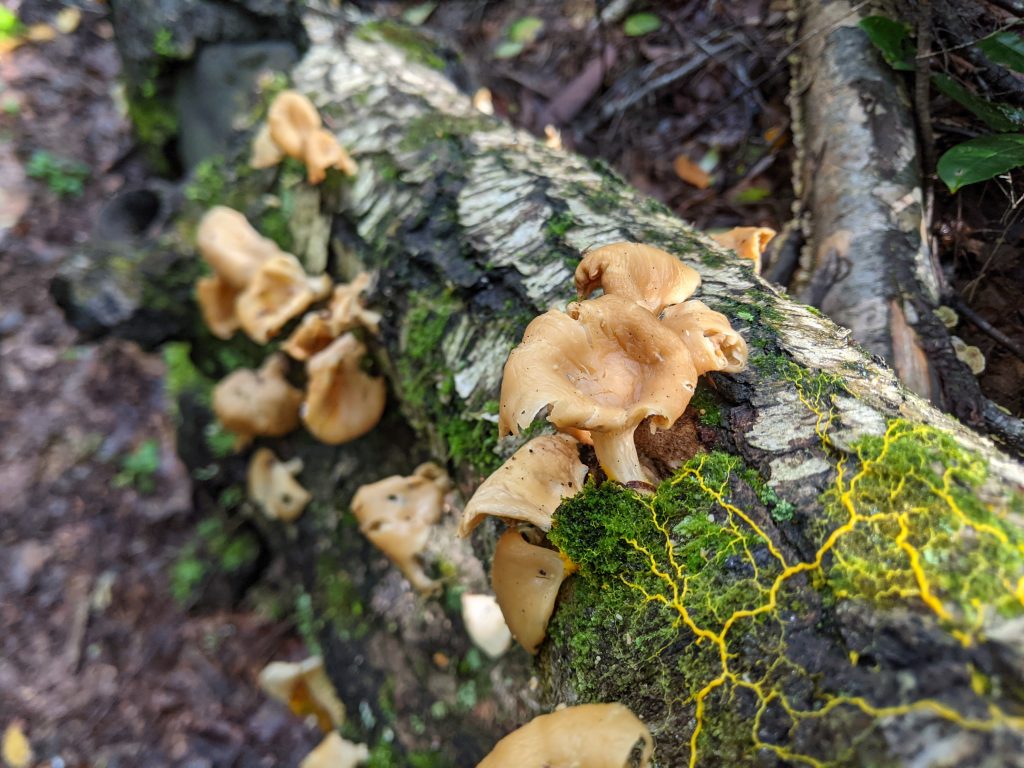 In the middle of the swamp, the water gets pretty deep and boardwalks are available to walk across.  Make no mistake though, the boards are extremely slippery, even WITH roofing shingles attached to try and give you some traction.  If you slipped off, you fell into water that would easily be six inches or more deep. 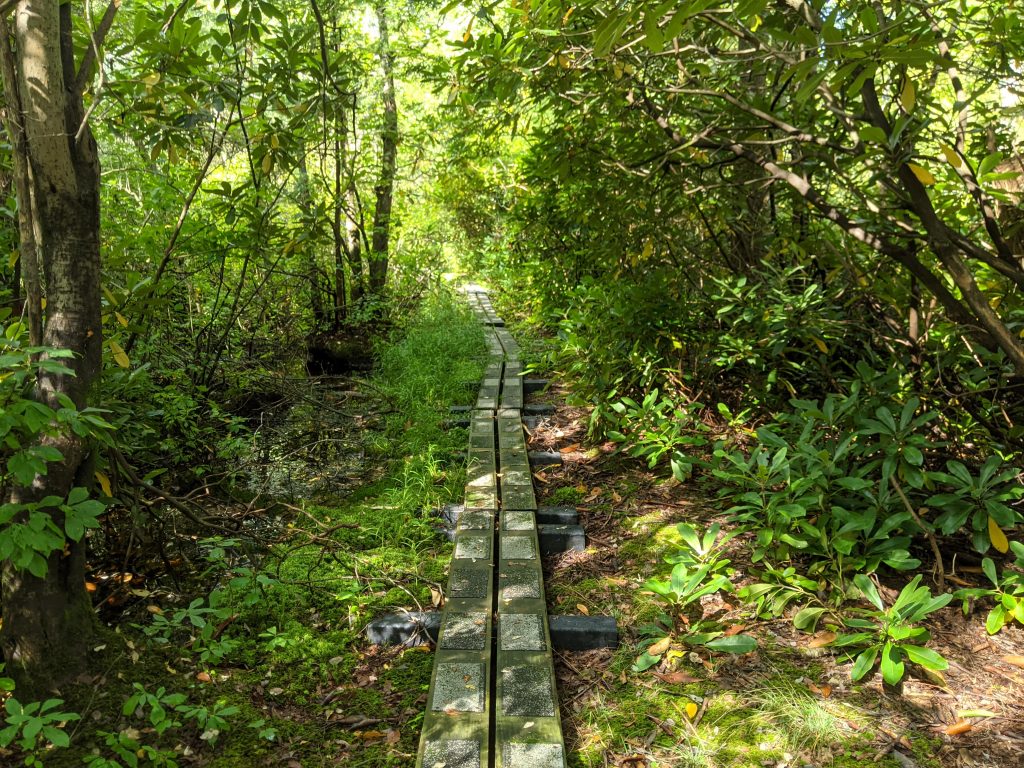 I tried to get a picture of the cedar-infused water. 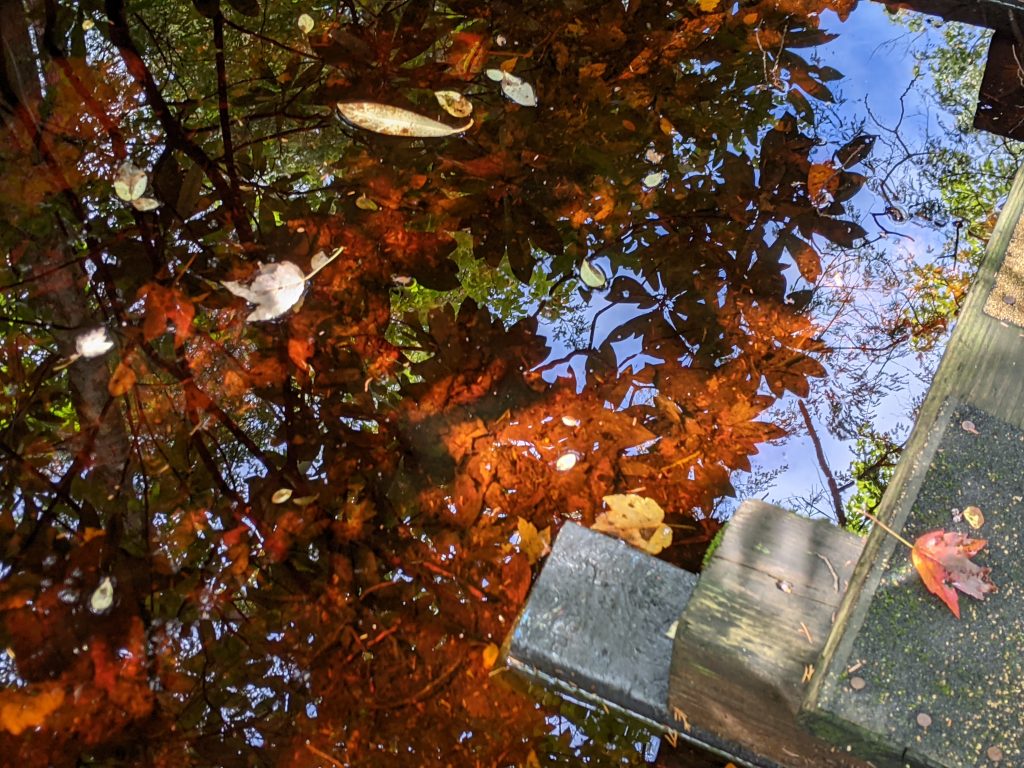 Just before coming to the campsites (and how people could sit without being savagely attacked in their sites,) I came across a boardwalk that crossed parts of a pond.  There were a couple of spots where the water flooded the boardwalks, and I thought I was going to get wet.  The boots held, and I emerged dry.  I wanted a picture, but I knew I was near the end, and I was really tired of the bites.

The mosquitoes and the bikes really marred this one for me.  And I’m not sure who junctions two trails of the same color – but that’s partly on me for not being more astute.  I’d probably come back, but not until the winter or much colder weather.  I arrived at the parking area before the access gate was open, and when I returned, the lots were fairly full.  I could see this being packed in the summer between Memorial Day and Labor Day.

I talked with a ranger on my way out, and she confirmed that the mosquitoes have been the worst lately.  I didn’t see any Lantern Flies, and when I asked about the Emerald Ash Borers, the ranger responded that had cut down almost all of the Ash trees to help stop the spread. 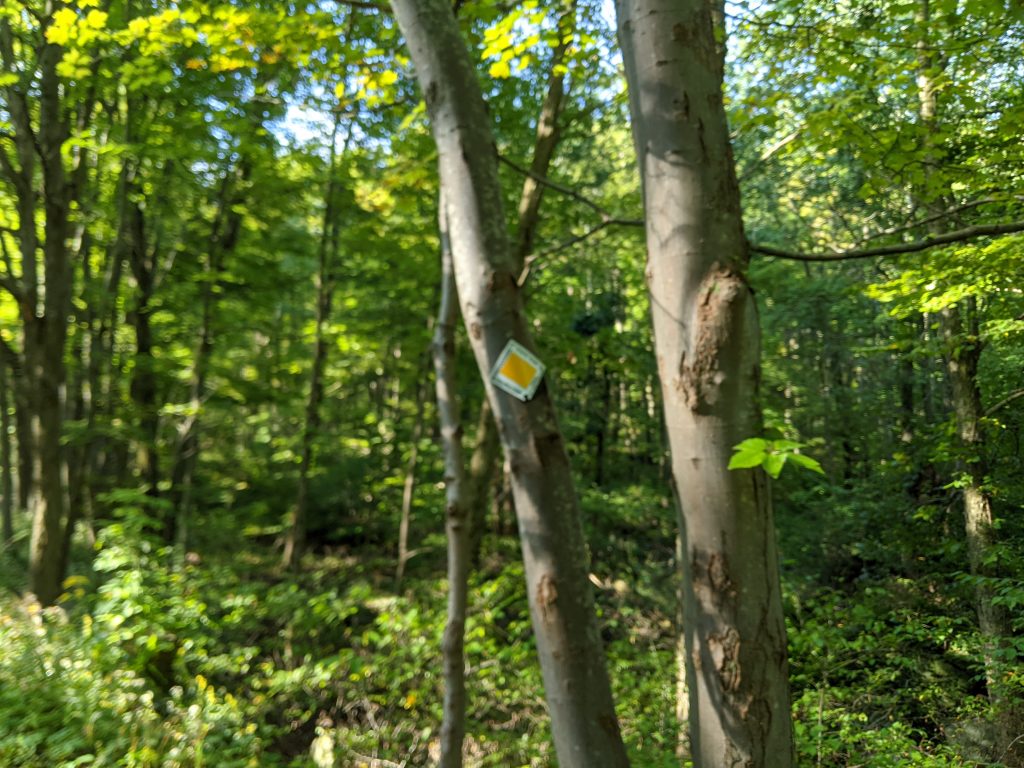 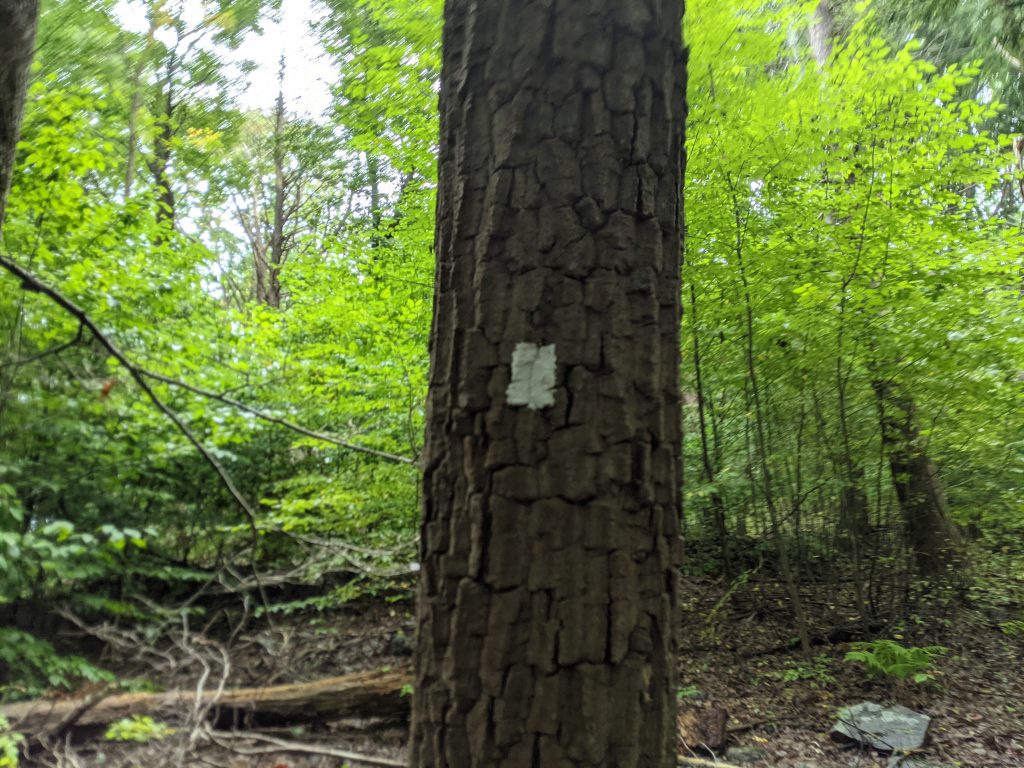 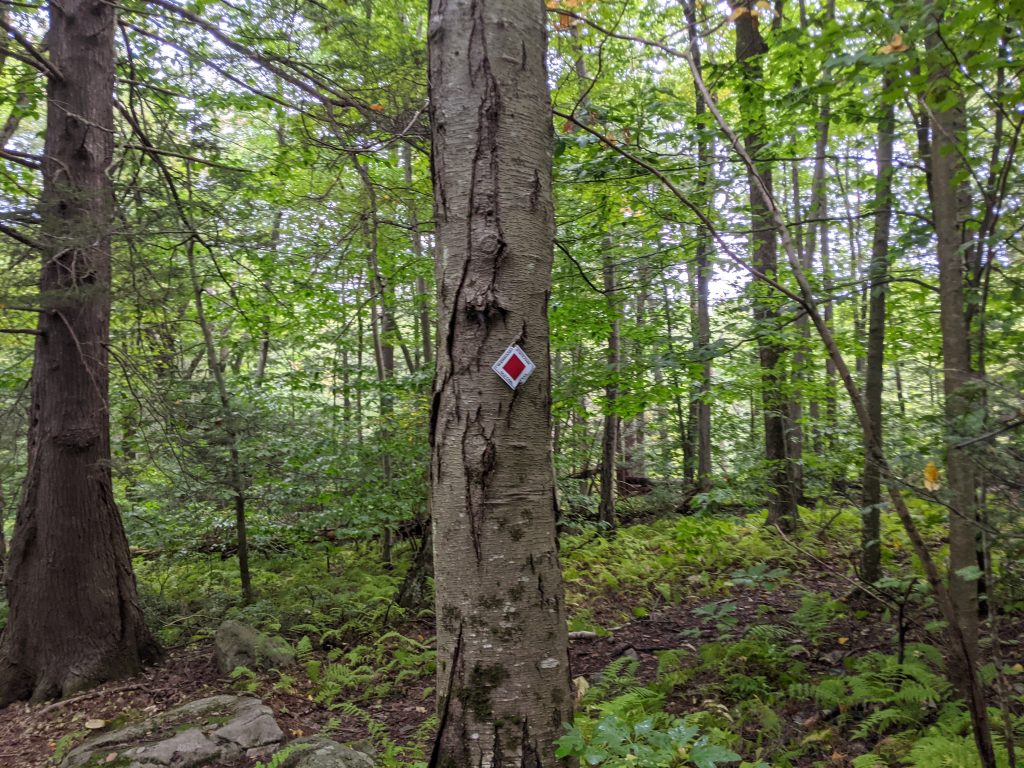 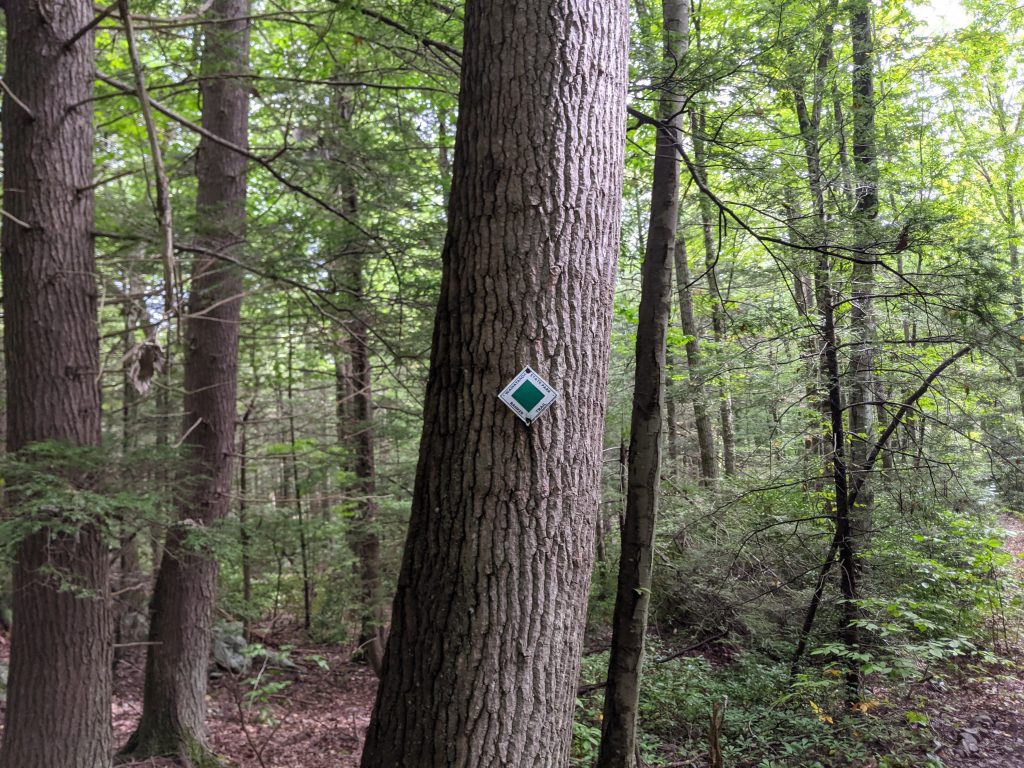 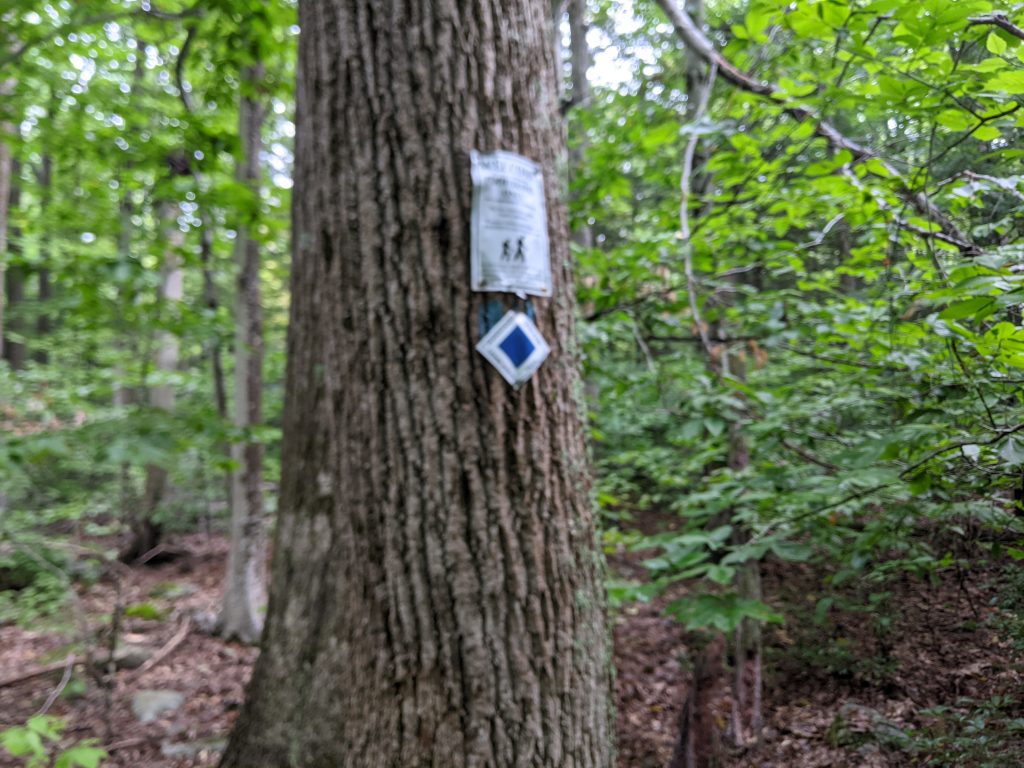 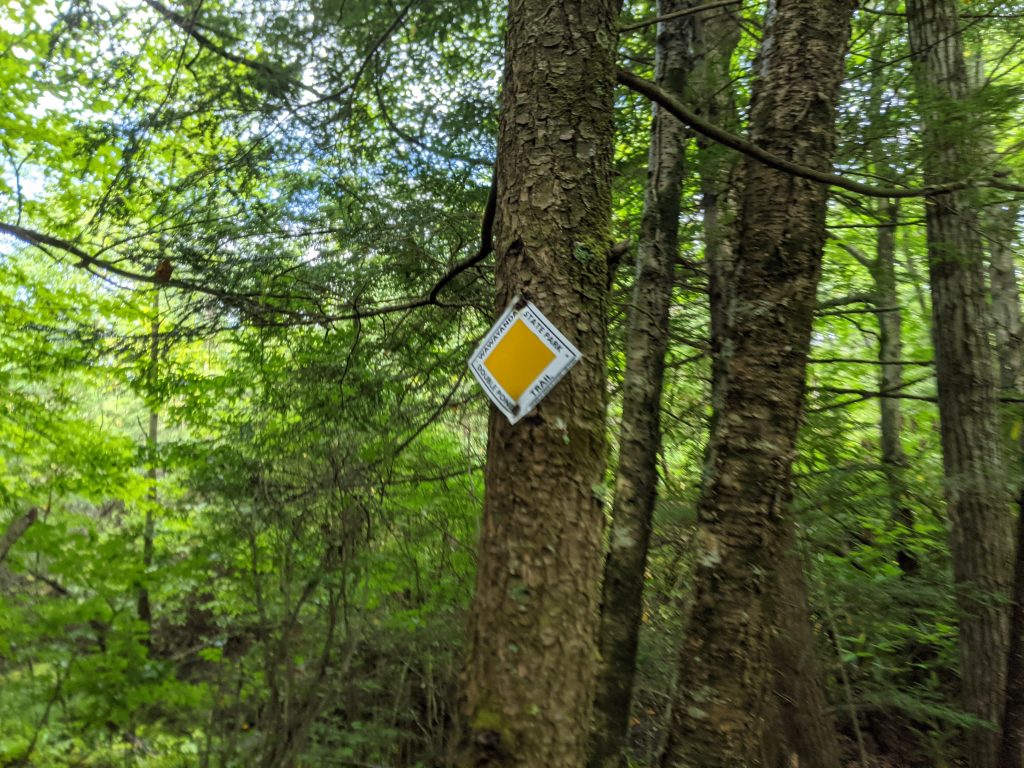