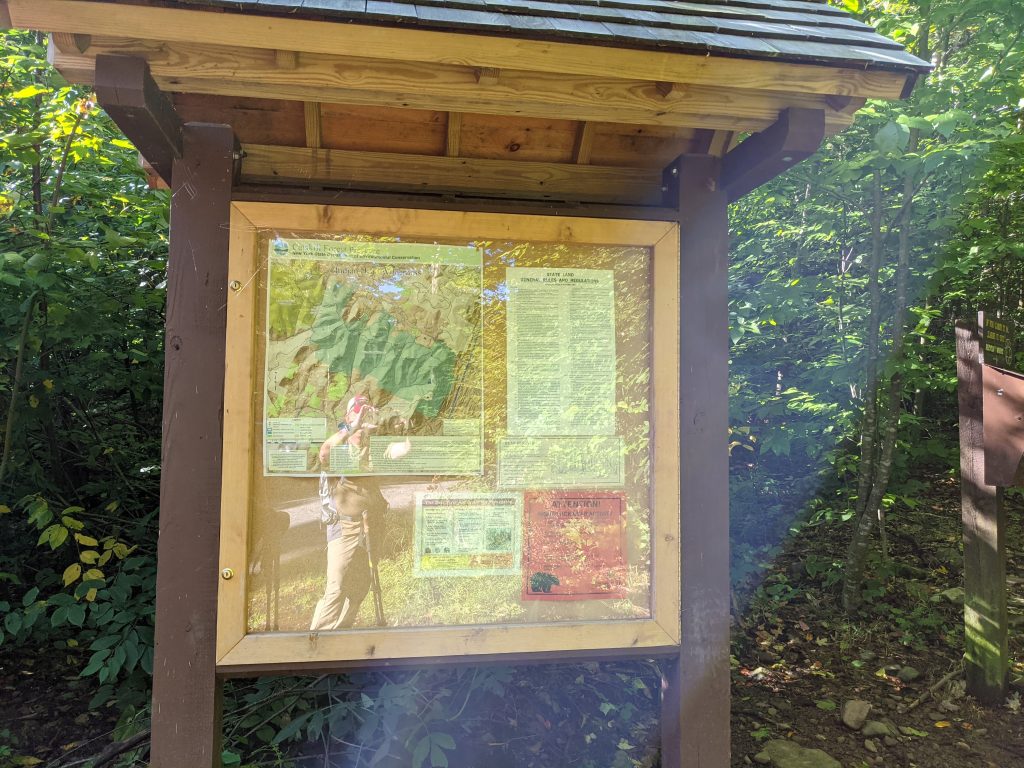 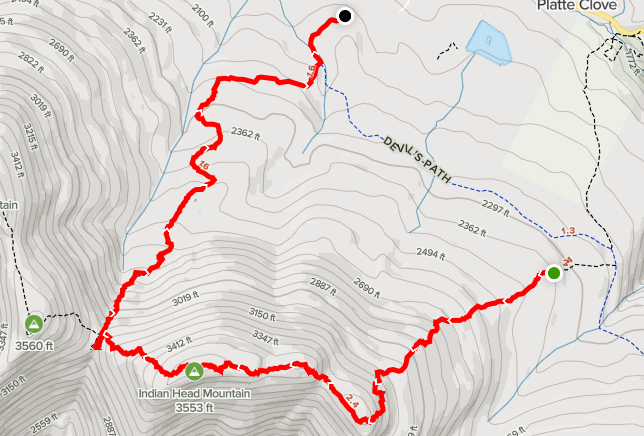 (A note on my map.  My phone died last week, literally right after returning from Wawayanda – I blame the mosquitoes.)  So, I had to get a new phone, and I couldn’t get AllTrails running properly for almost the first mile and a half.  We started at the black dot up top – so, what’s missing is the portion of the Devil’s Path up to the green dot.  To see the complete map, try here.  The maps differ because we took a small spur trail into Jimmy Dolan Notch for the view.)

This is the trip I’ve been waiting for all Summer – at least since August when I signed up.  This trip was run out of the Monmouth County Parks System, which meant that seven us rode with two trip guides up to the Catskills, in New York.  For once, I would not have to drive back, and at this distance; I’m glad.  Andrew and John did a fantastic job running this trip for the Parks System, both in choosing the site and route, and keeping us moving.  You will not see as many pictures on this trip, mostly because we moved at a brisk pace.  I did get to take pictures of some views, and some of the flora, but mostly on the way down.

From the get-go, I couldn’t get AllTrails to work on the new phone, which meant that John, the back guide, and I were separated from the group.  A quarter of a mile in, we came to the first junction, and without the rest of the group waiting, we chose wrong and headed up the Jimmy Dolan Notch Trail.  After rock hopping the stream, we came to a hiker coming down who said he did NOT pass a party of seven.  Back we went to the junction, to find Andrew waiting for us.  Reunited, our group headed up the Devil’s path – which was really quite quaint here.  The path was wide, slowly ascending, but seriously muddy.  For almost the whole trip, water ran down the trails; sometimes pretty quickly, and at one point, we literally walked through small waterfalls.  Those with waterproof boots trudged on through.  My boots are vented, and honestly, I only noticed the water once.

The Devil’s Path intersects with the Long Path for about 100 feet, and then turns right away from the Long Path.  Say goodbye to gently ascending terrain, from here up to the ridge it’s scramble after scramble – both roots and rocks.  I don’t mind scrambling, some is really fun.  What made this difficult was the constant water running off the rocks.  And the grade.  The map says it’s a mile and quarter from the junction to the first viewpoint.  And it’s pretty strenuous and near vertical at points. 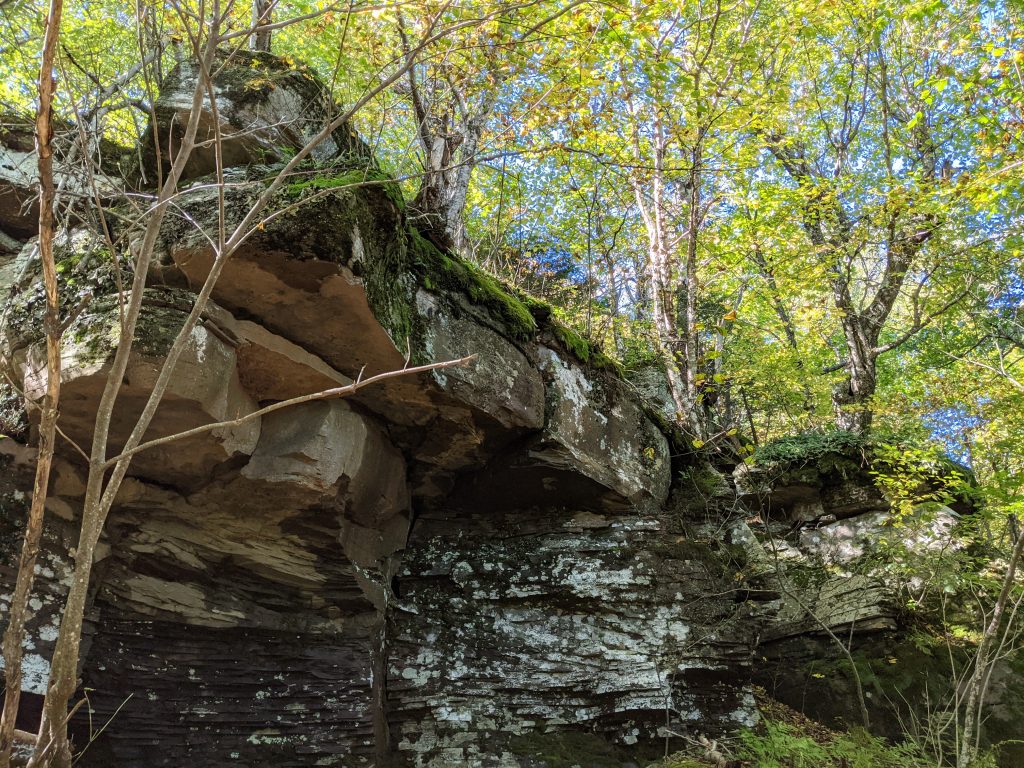 After climbing around this rock, the trail reaches the first viewpoint, and in my opinion, offered the best views of the day.  This viewpoint, labeled Sherman’s Viewpoint on the map, offered more than 180 degree views, and had some rocks to sit on. 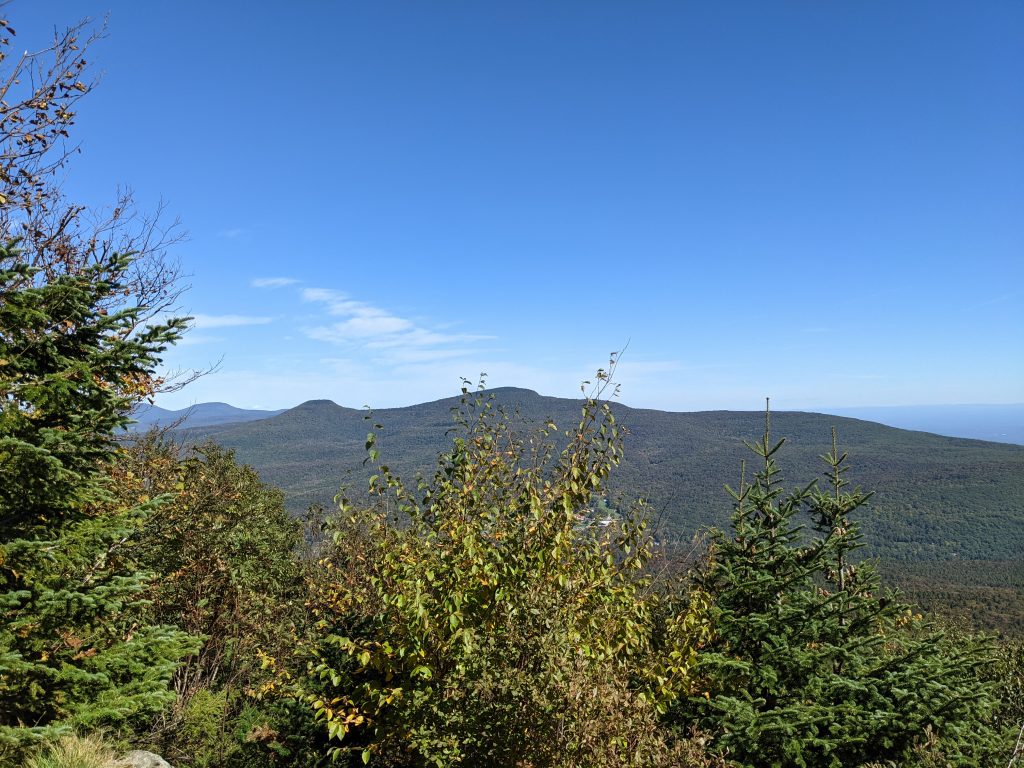 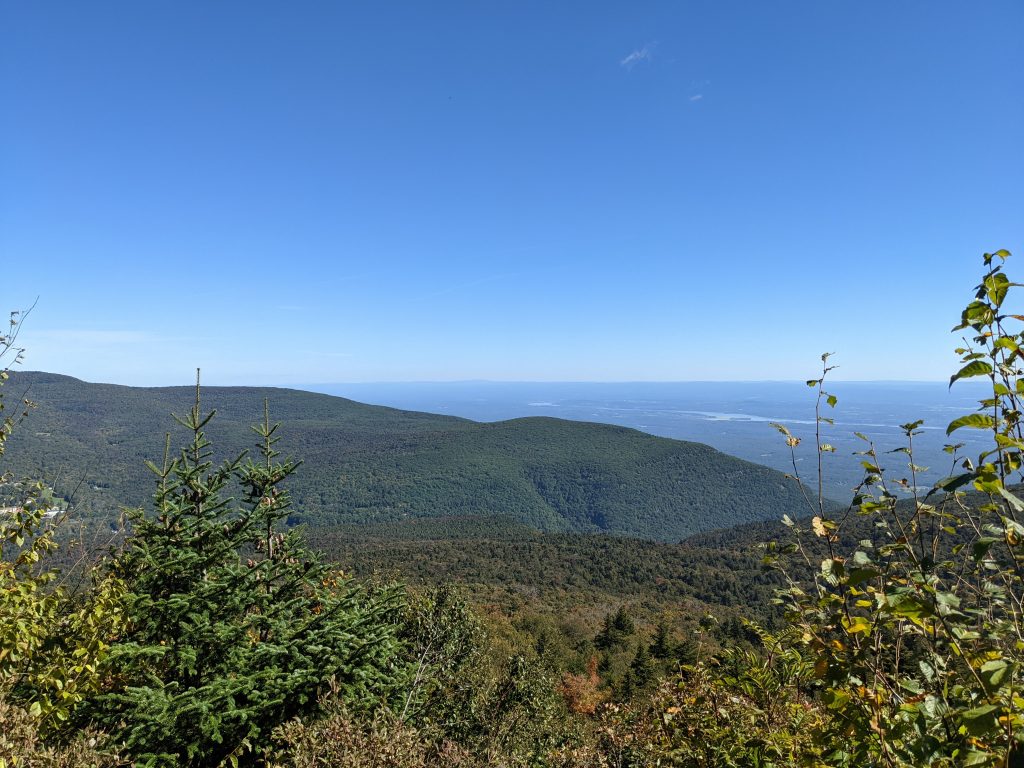 There was some discussion on eating here, but we still had one more serious climb before reaching the summit – so we decided to put off lunch until later.  A wise choice.

One particular fun puzzle is the rock chimney just before the second viewpoint.  You’ll know it when you reach it, and the viewpoint is right at the top.  This chimney was a large rock, with footholds in the face.  You had to pull  yourself up using the tree roots on the side.  Yes, it was fun.  If it had been much higher that might have been a different story.  I couldn’t really get a picture as I was in the middle of the group and didn’t want to hold people up.  So, I snaked this picture from www.hikethehudsonvalley.com. The picture doesn’t really do it justice – it’s more vertical that it looks.

From the top of the viewpoint: 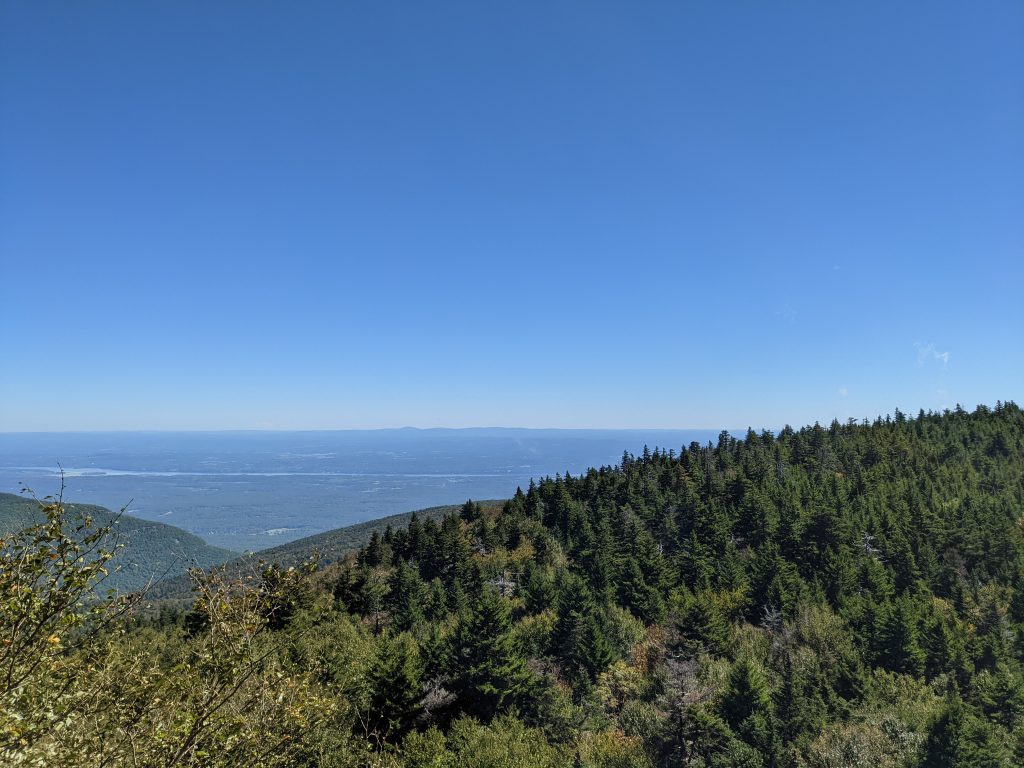 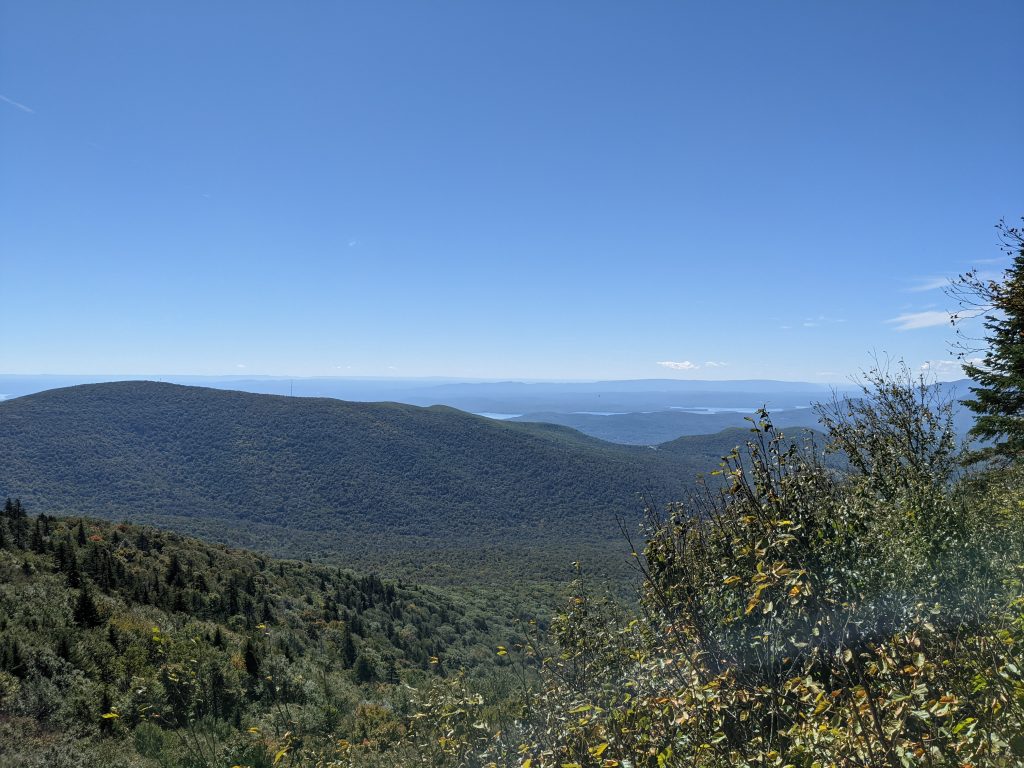 And that would be the end of the real serious climbing.  There would be a couple more smaller scrambles, but nothing to really write home about.  Once on the ridge it was absolutely gorgeous – with temperatures in the low 70s and abundant sun.  Further, at over 3500 feet, we were in a hemlock and balsam forest, and it smelled great. 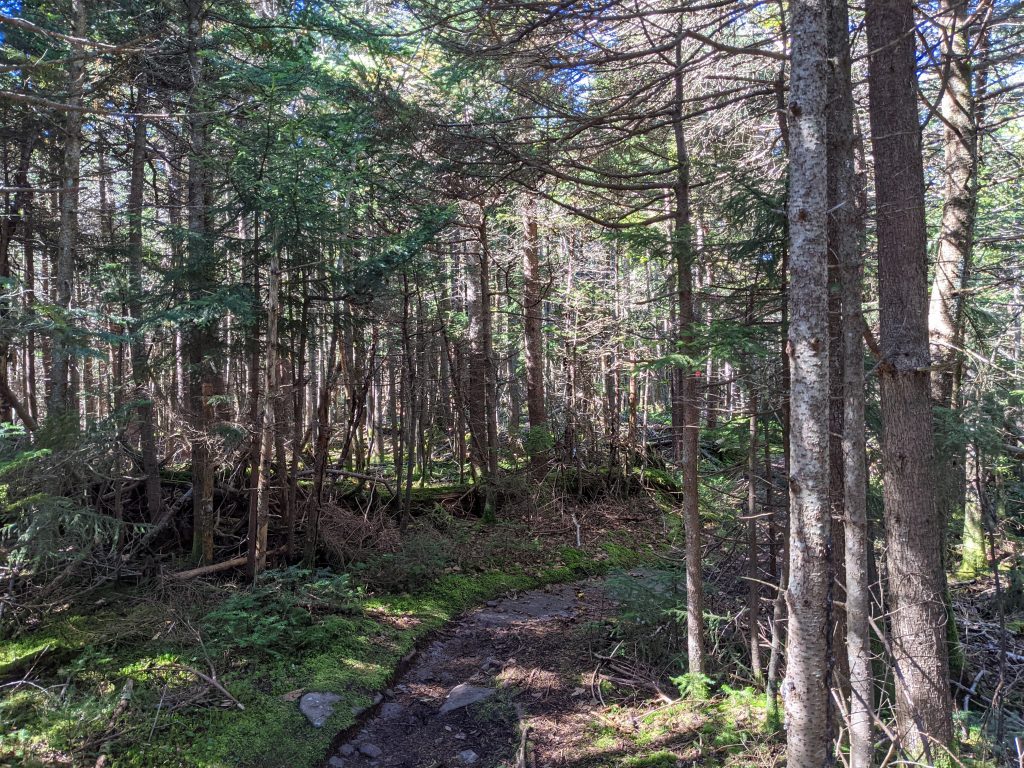 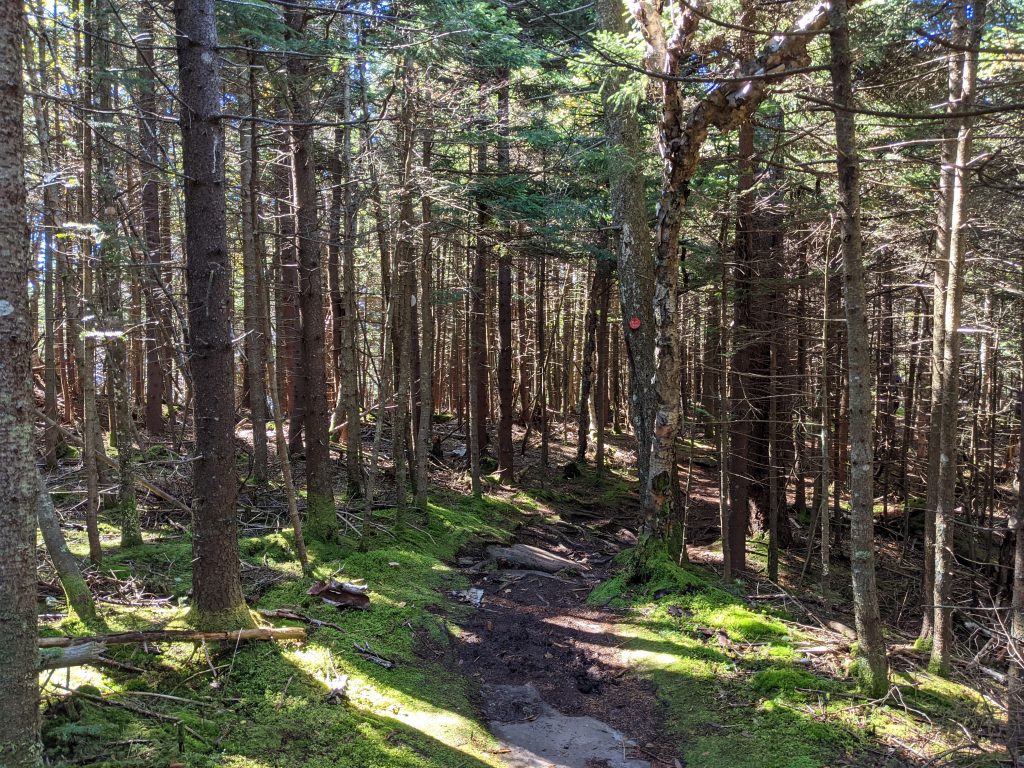 At one point we had to navigate cracks in a big rock in order to reach the summit.  Here’s a picture of the rock face, we kind of dog legged it around back then up to the top. 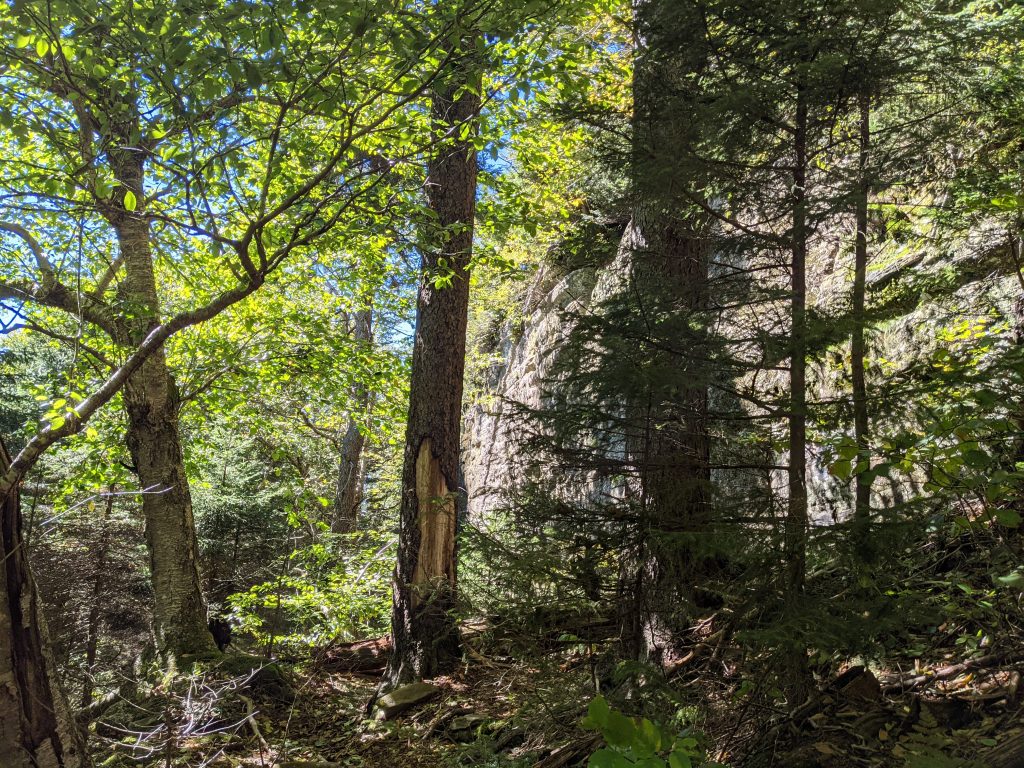 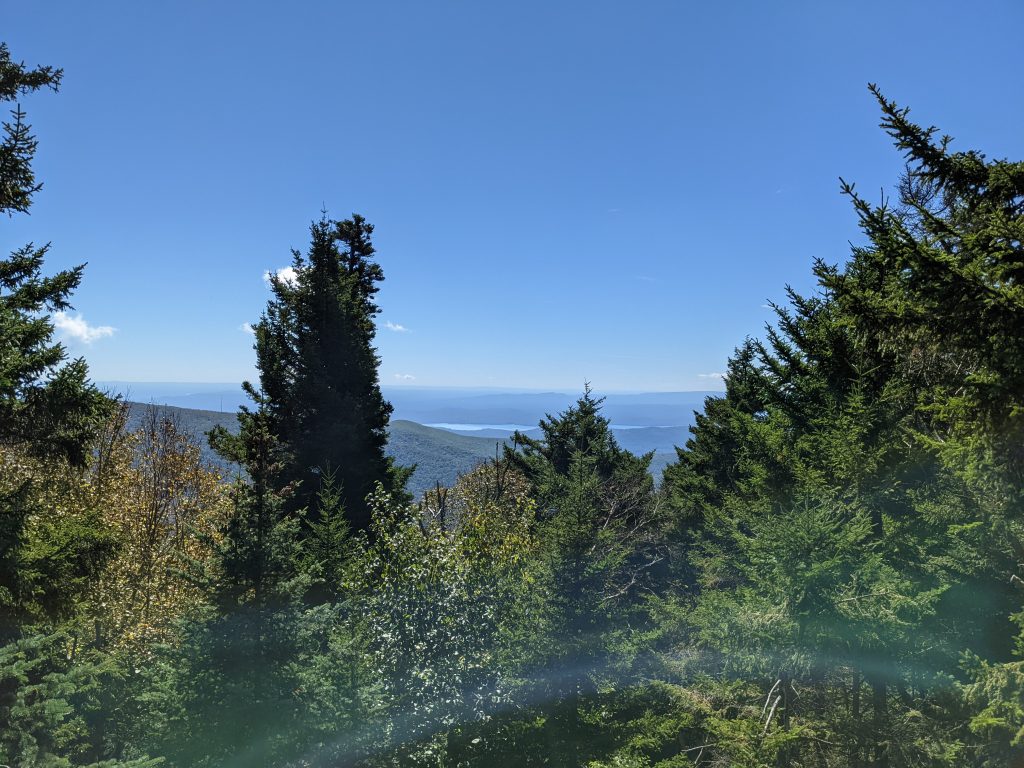 After eating I scouted around the top and found Bolettes in interesting locations. 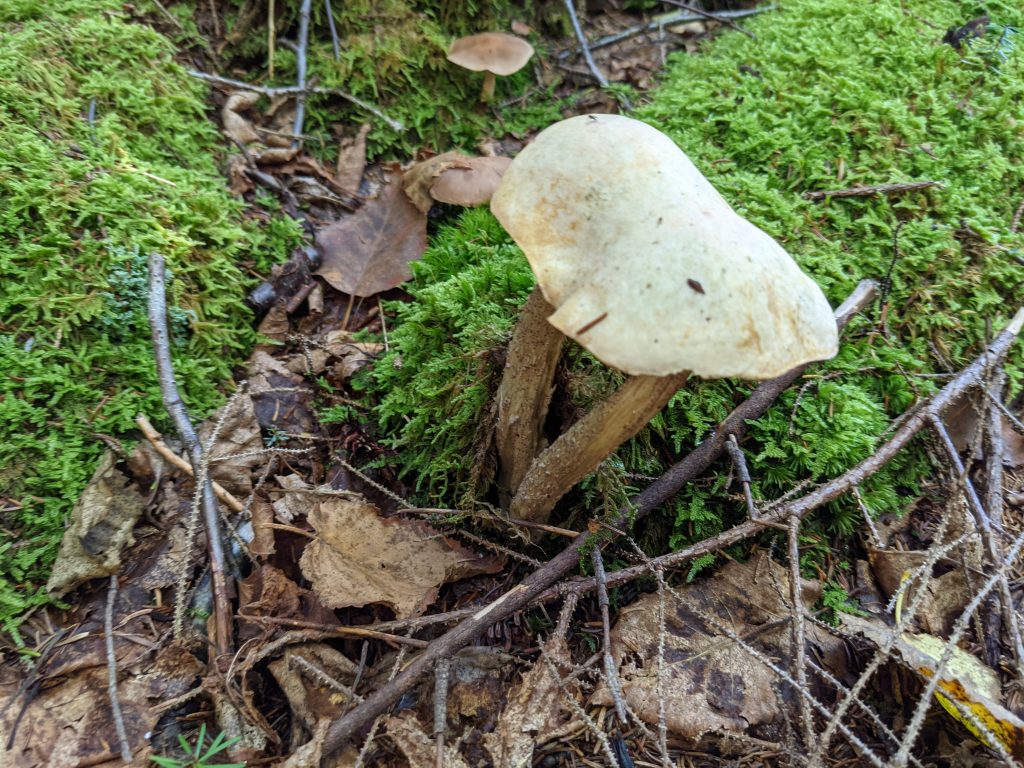 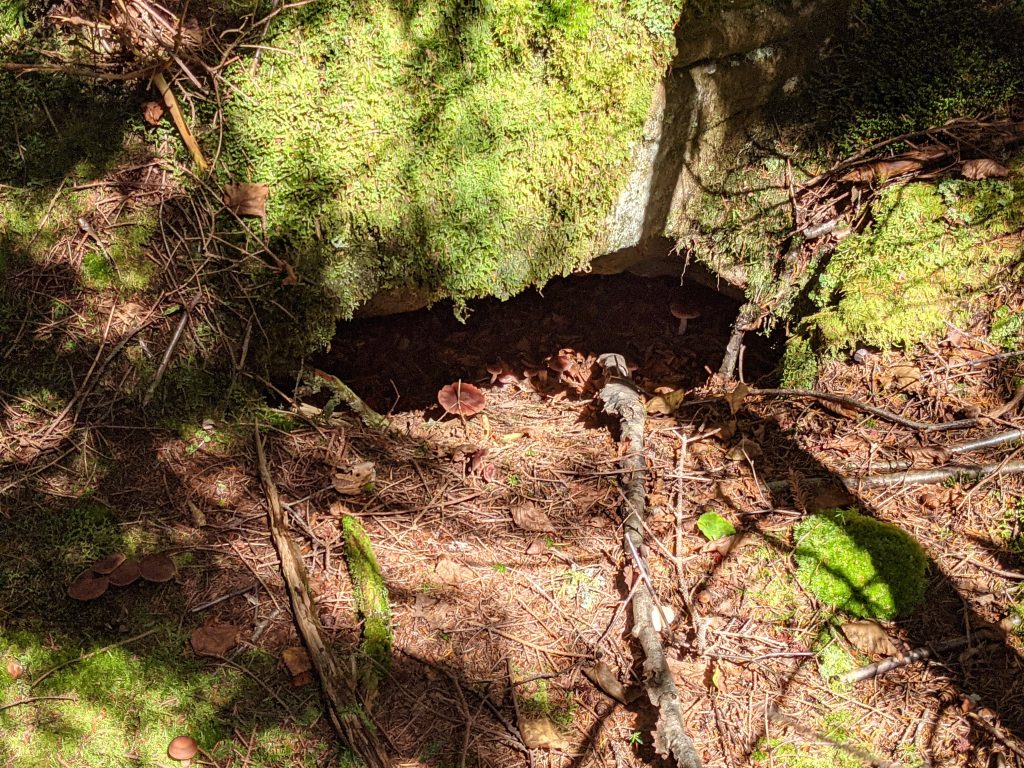 After we finished eating, we continued west on the Devil’s Path into the col between Indian Head Mountain and Twin Mountain.  There was one interesting chute to descend, and we were passed by a couple and their dog – who probably did the chute easier than I did.

And the descent was made tricky by the constantly flowing water down the trail.  Rocks were not just slippery, but outright treacherous in some spots.  Everyone made it back in good time and with no accidents.  Certainly, it was a challenging trip, but well worth it.  The Catskills looked awesome, and further trips are necessary in the future. 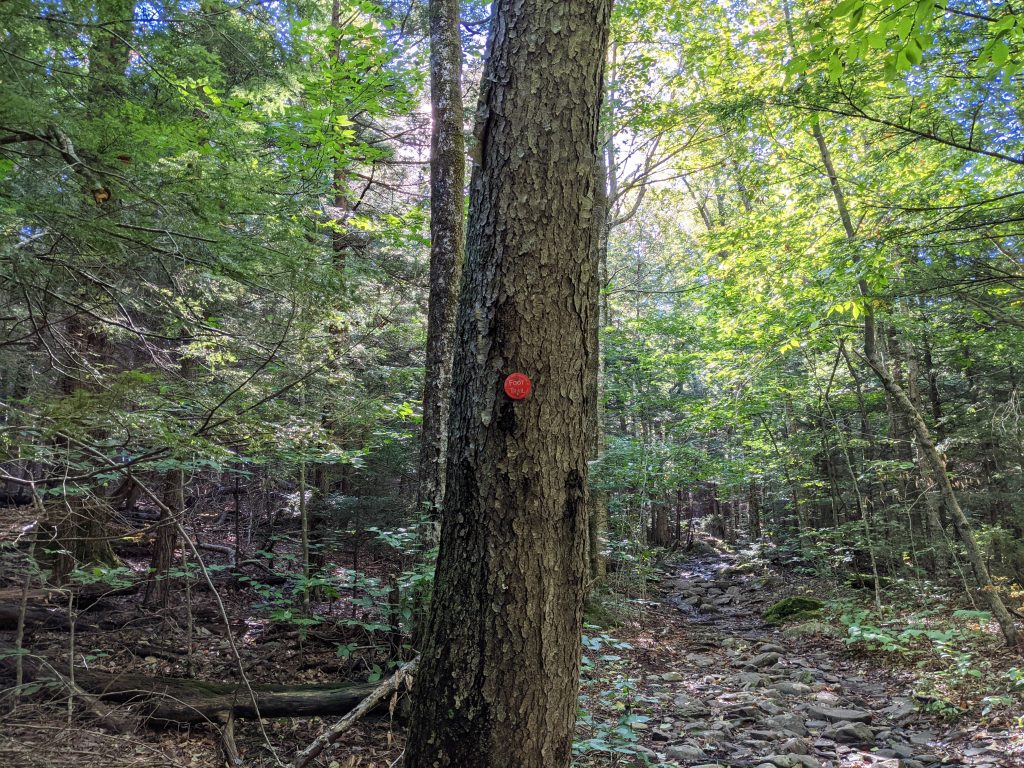 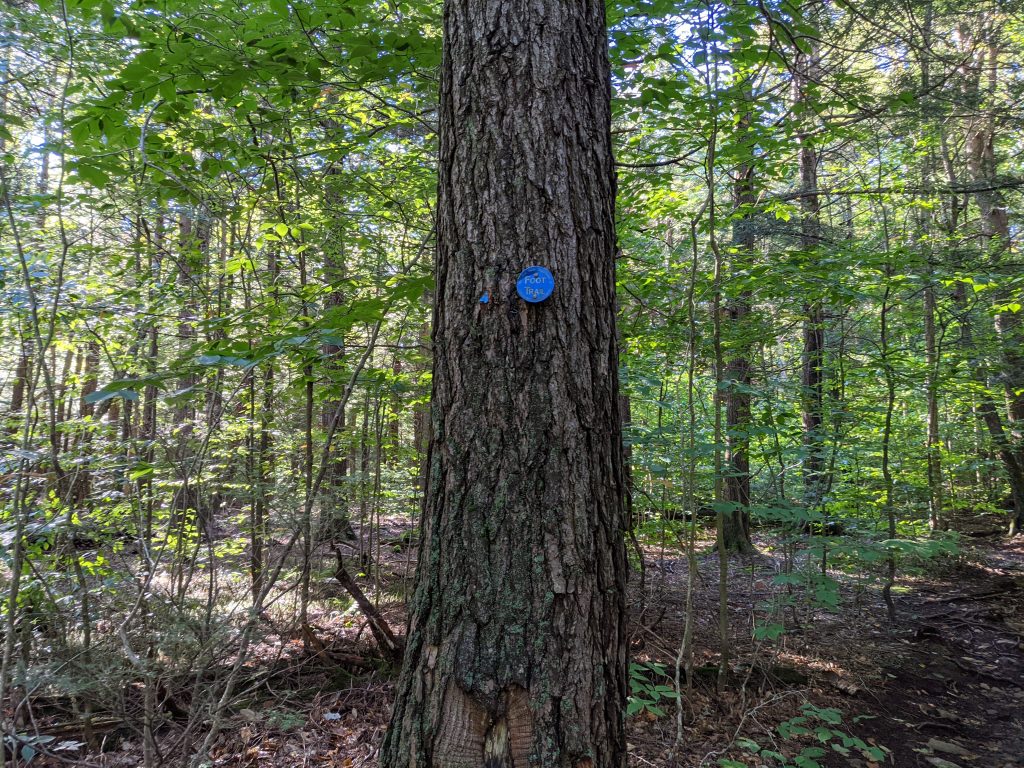