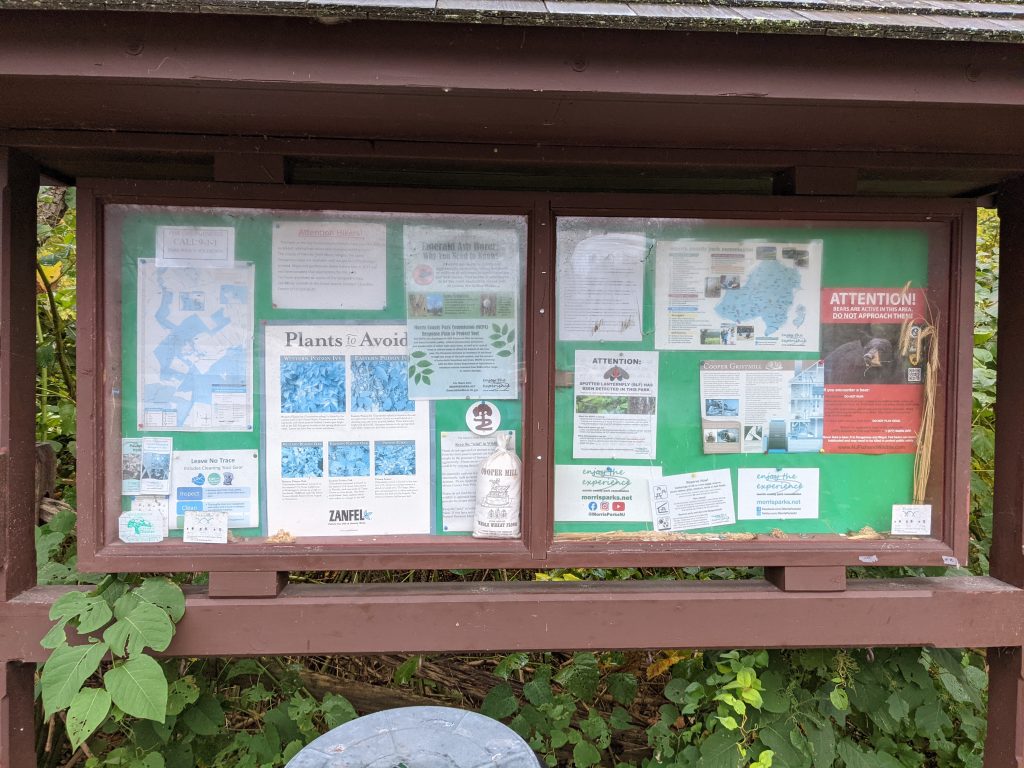 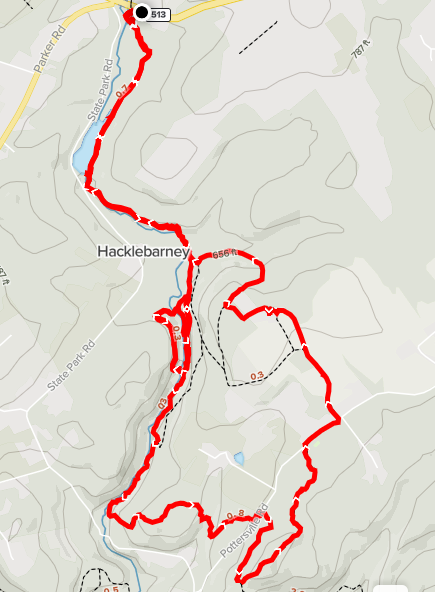 (Once again, I missed a turn, hence that loop.  The loop doesn’t really close, as the Black River goes through the bottom of the loop.)

The sole purpose of today’s hike was to a) see some Fall colors, and b) not walk as far as the last two weeks.  Colors are coming out but they are not peak here.  I drove by some vibrant colors, and I drove through areas that were still green.  The same goes for the park on this day.  I started off in rain, and by the time I made it to the Environmental Center, the sun was trying to peek through.  It was mostly cloudy for the whole walk, though.

Right off the bat, the Patriots Path starts at the Cooper Gristmill.  While closed, I would have loved a tour. 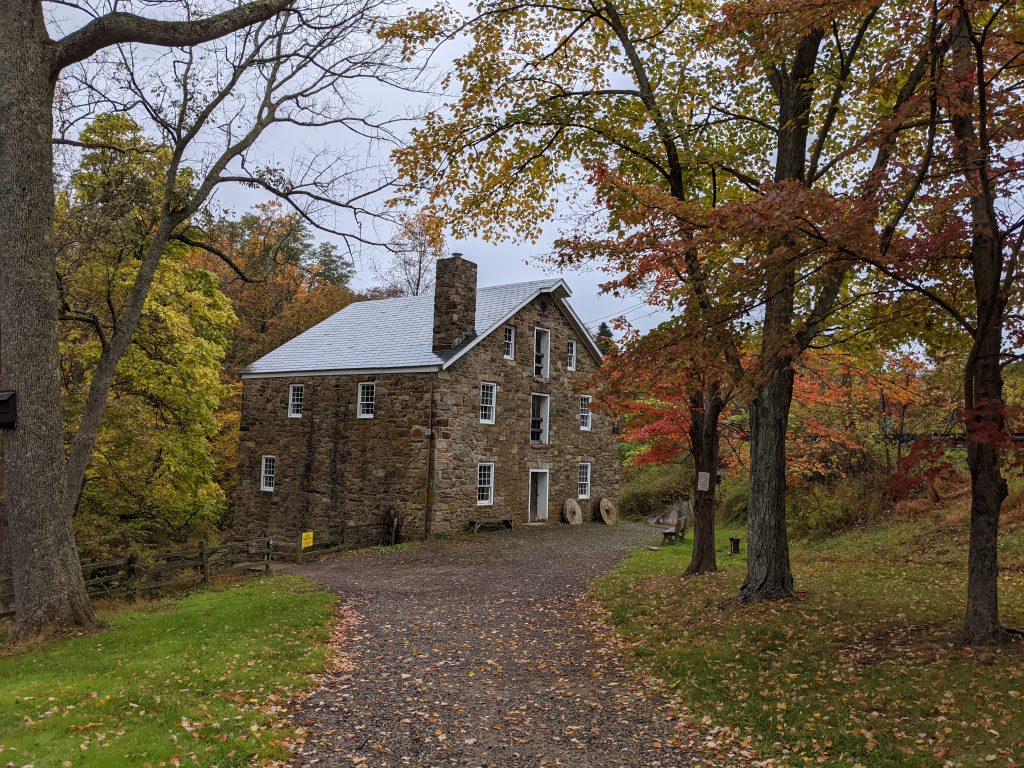 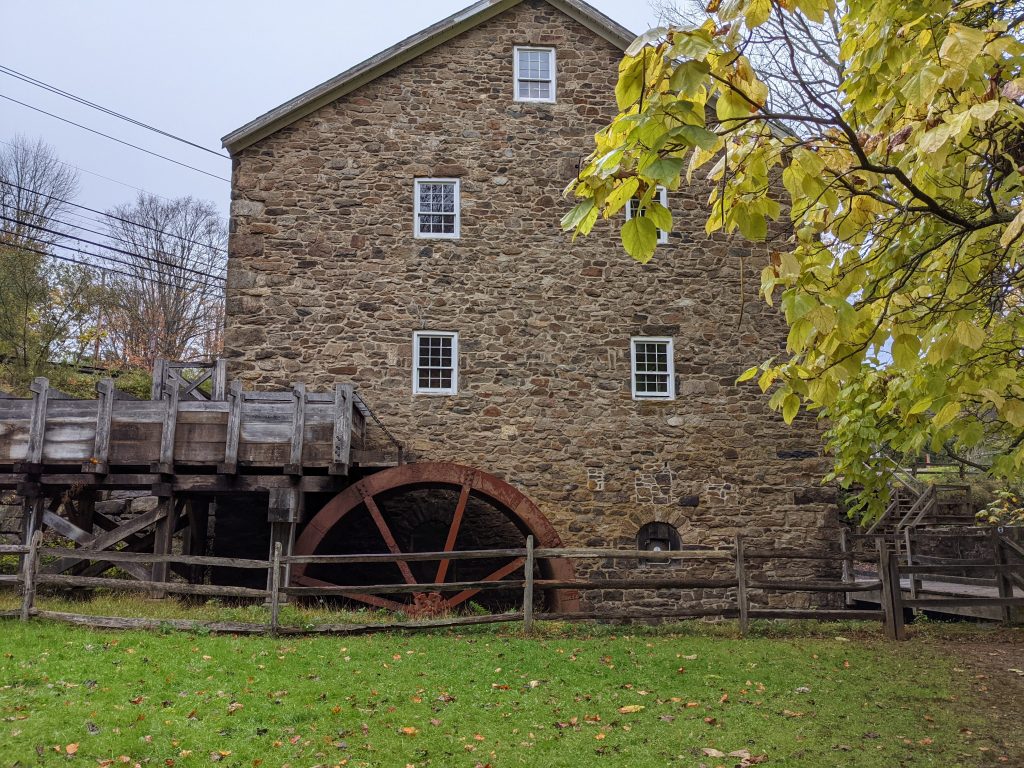 Behind the mill, the path winds down to the Black River, and the Patriots Path, the Green trail, the Orange trail, and the Green-Orange trail walk close to the river.  The river is always gurgling, however, when you come to falls, it gets pretty loud. 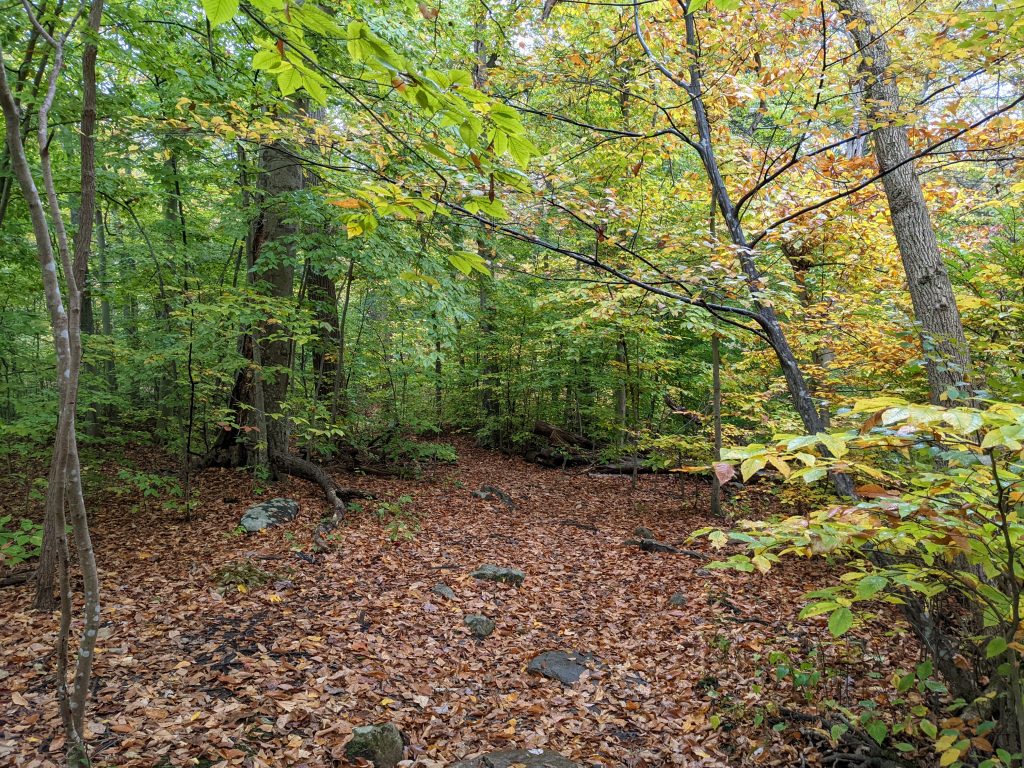 It did not take long to arrive at Kay Pond. 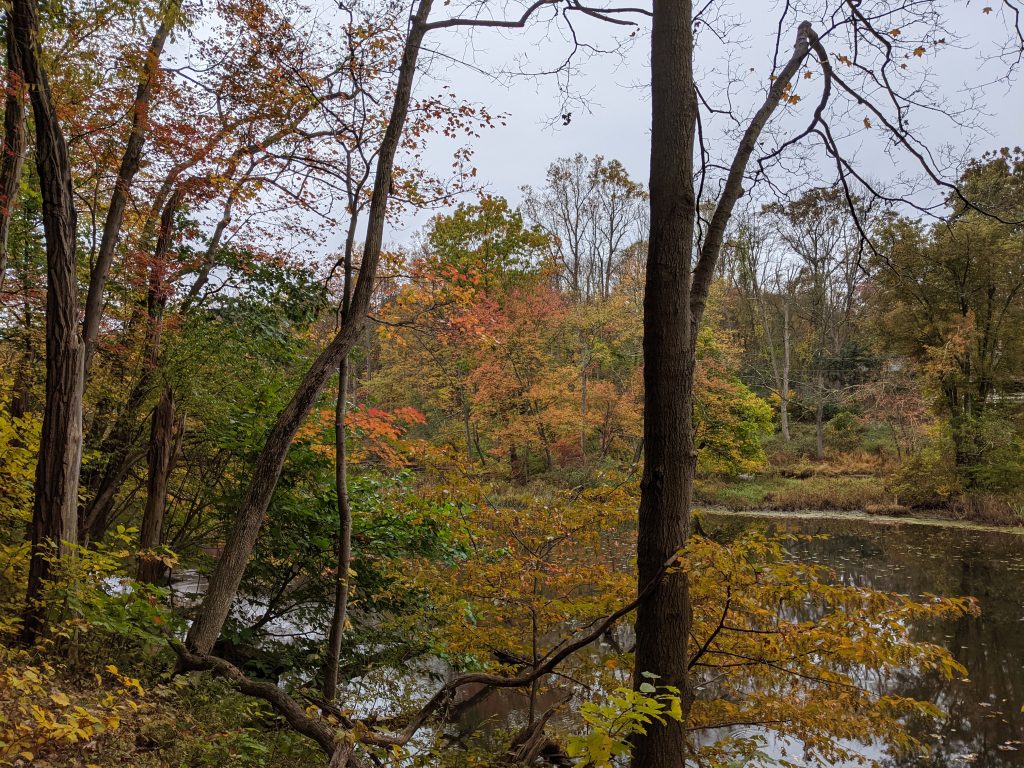 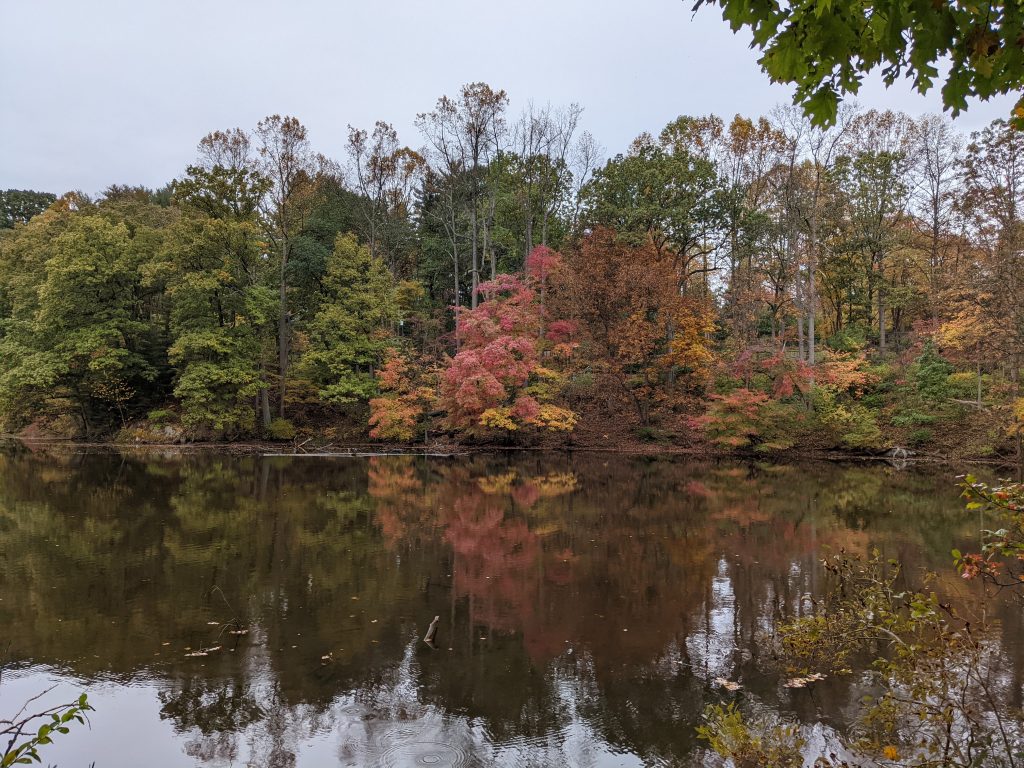 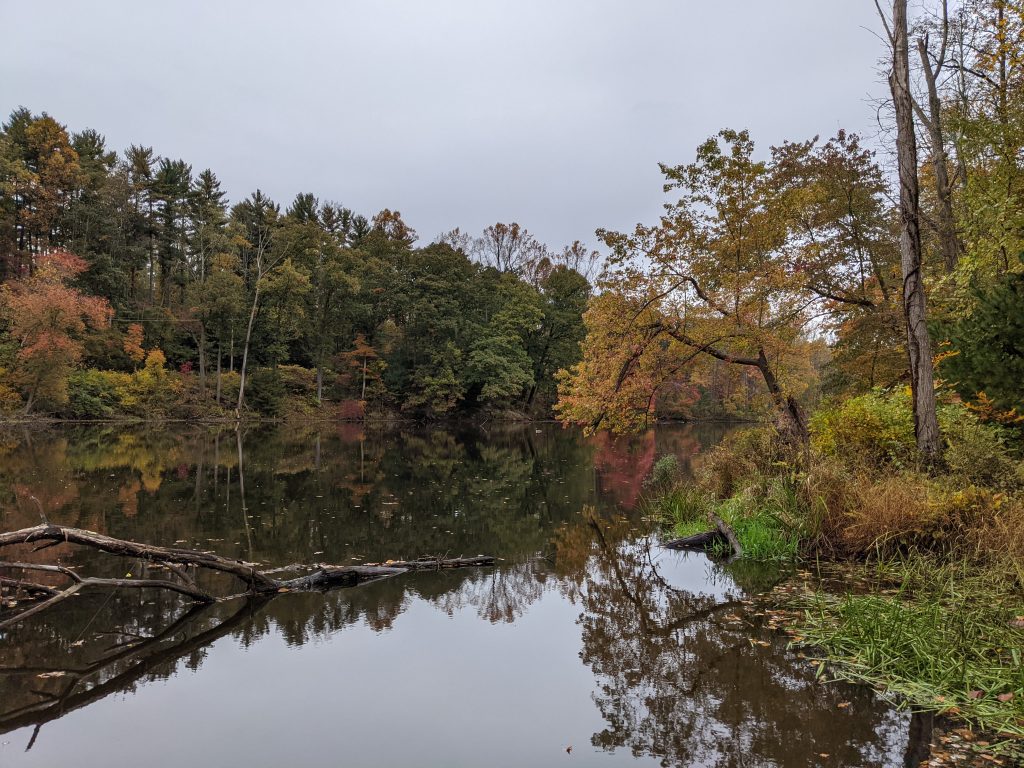 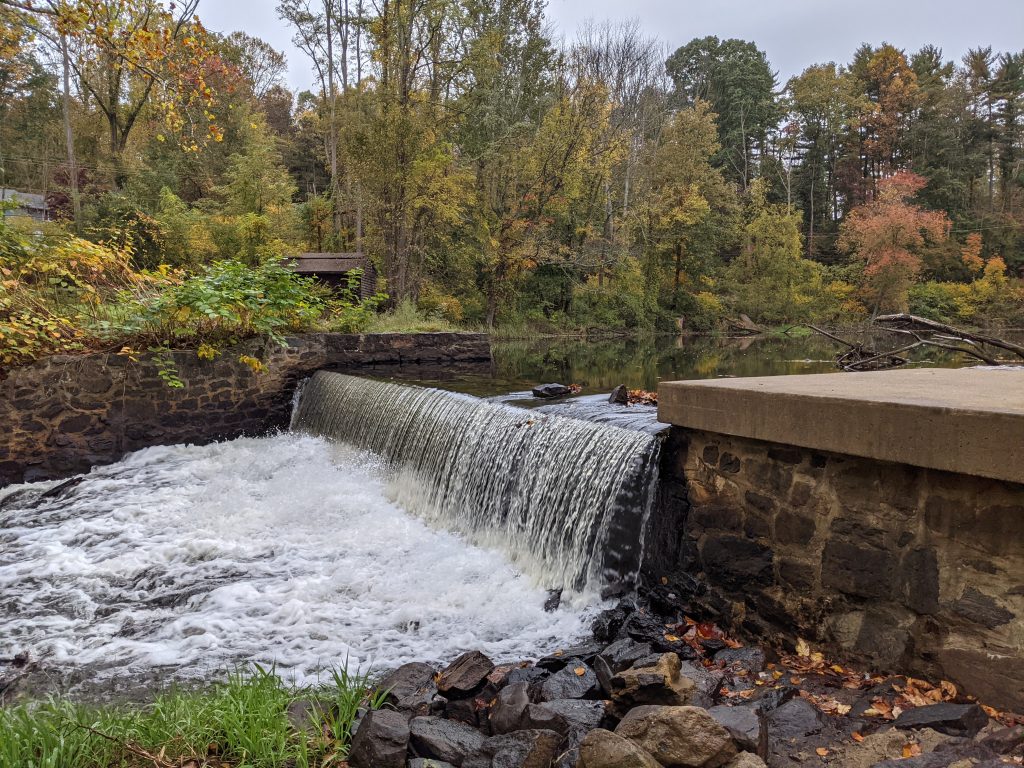 I bet the pond would look gorgeous with the sun out. 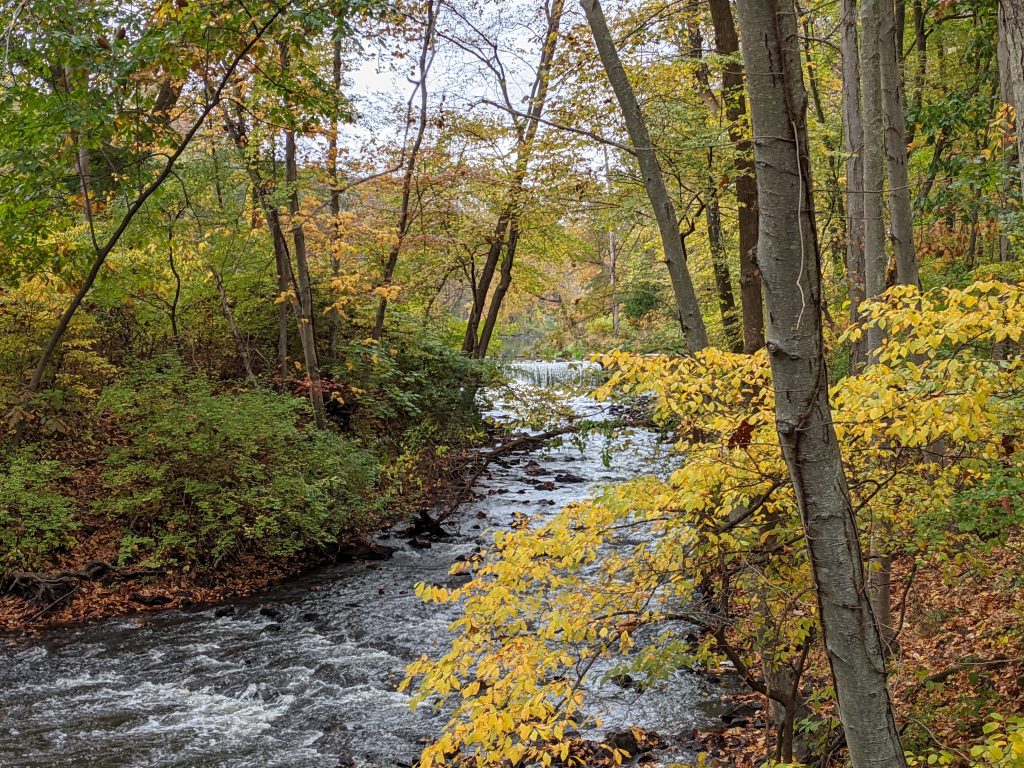 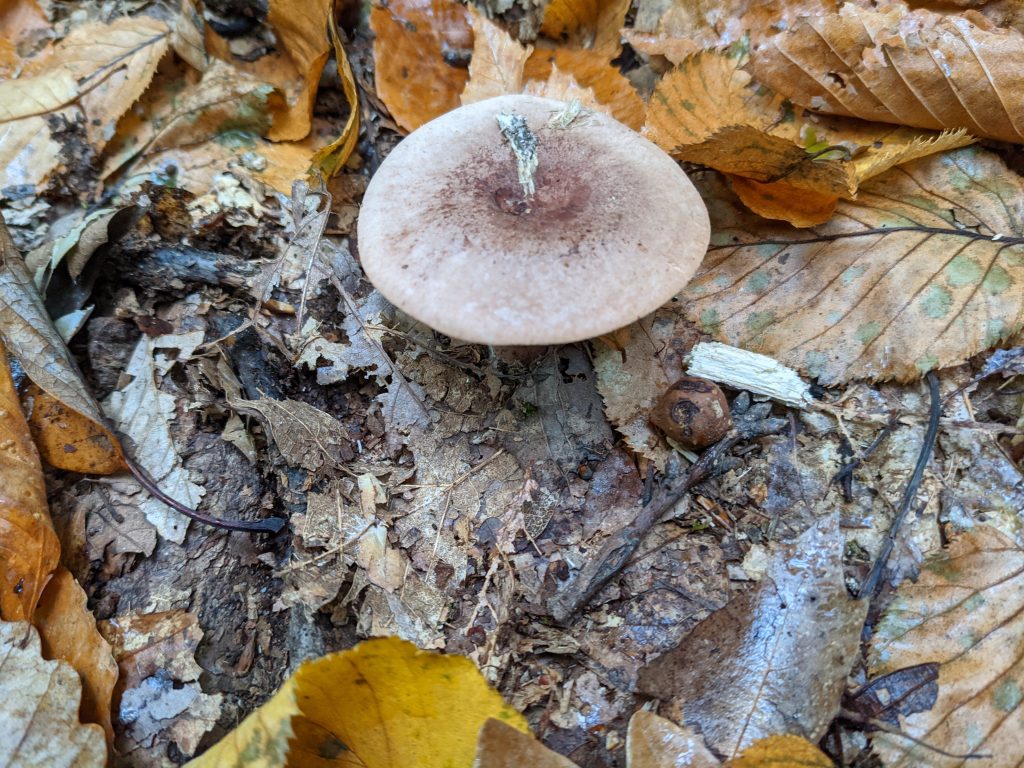 From the green trail, I took the orange trail part way to find the ruins of Kay’s Cottage. 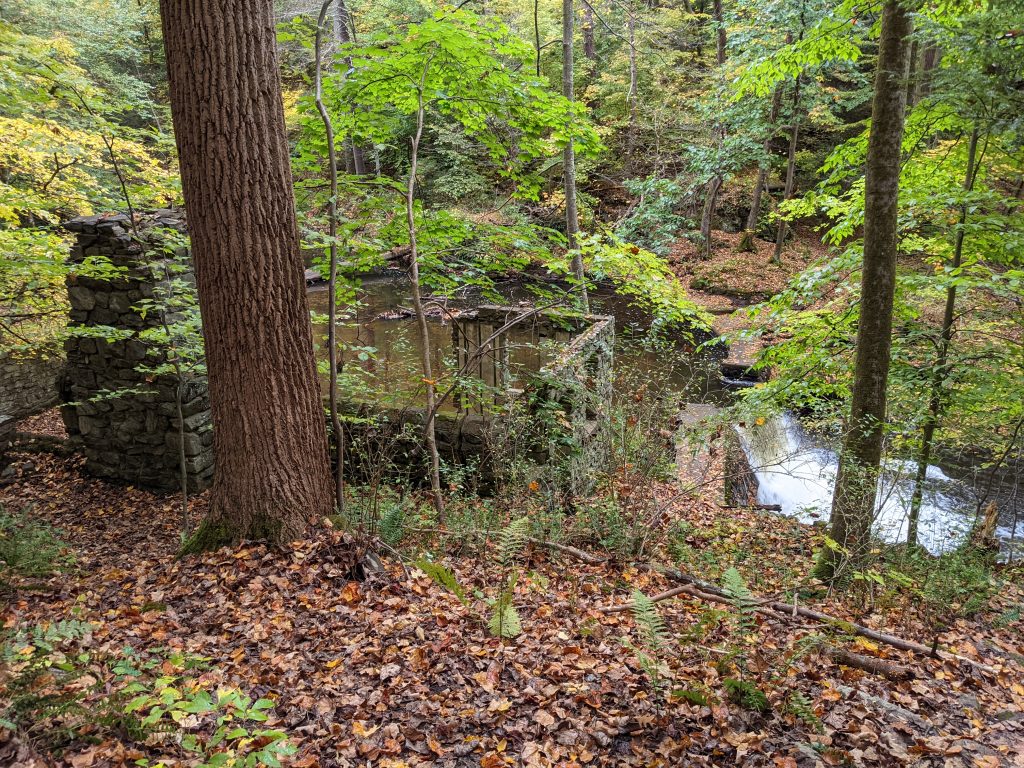 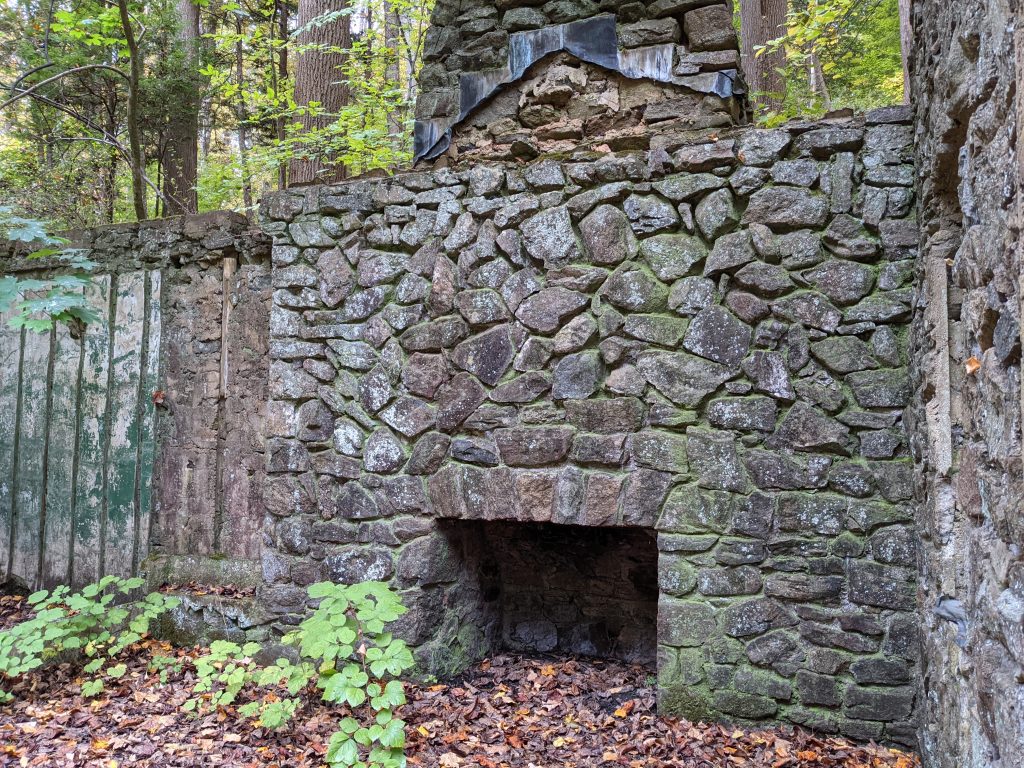 A pool had been created for the cottage by damming the river.  Again, the falls were loud. 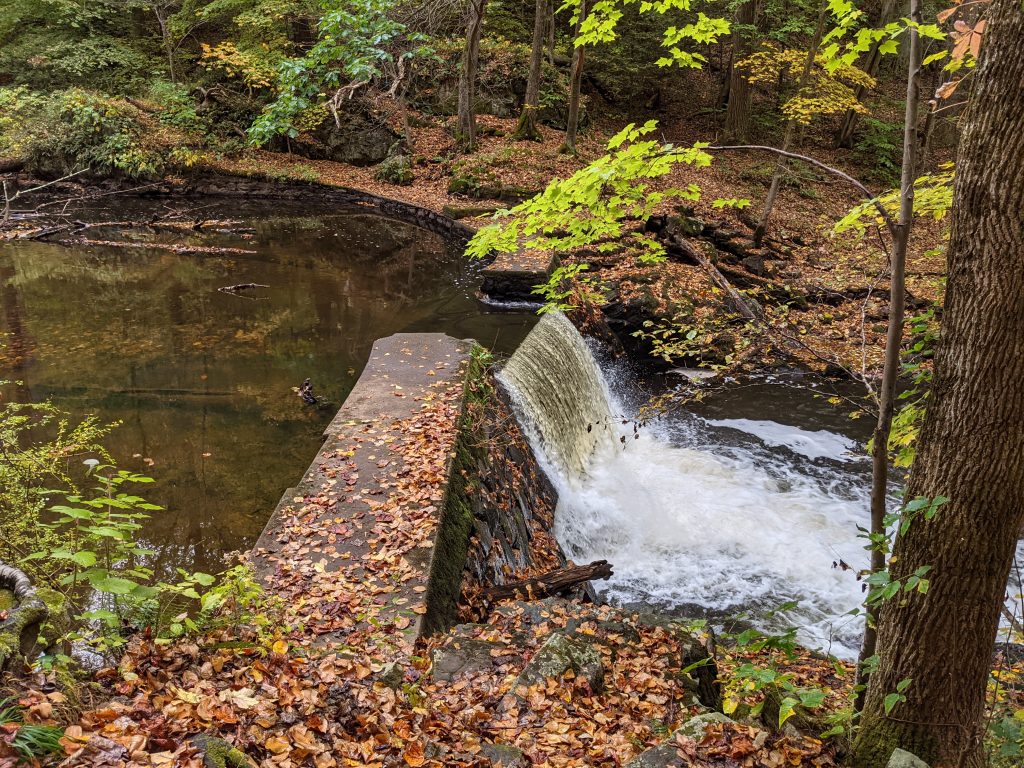 Retracing my steps back on Orange, I took the Orange-Green trail until it merged with the Green trail.  For a cooler cloudy day, there was still plenty of growth.

Green hugs the river, and just before the junction with Red, I came across these ruins. 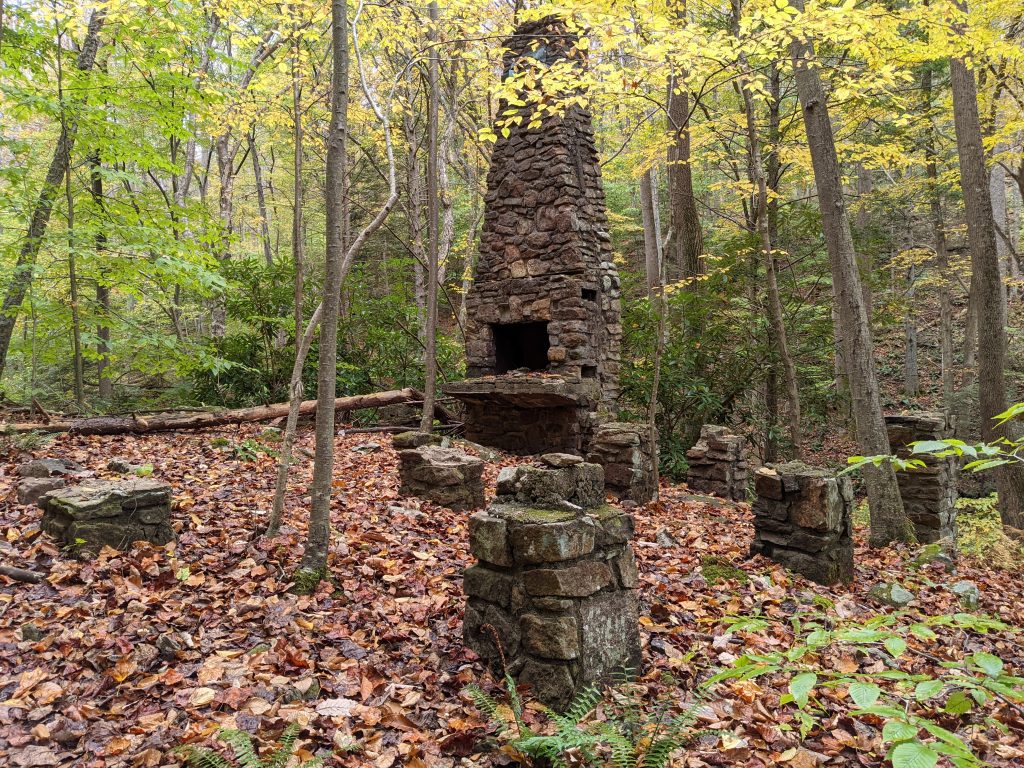 Red follows the river too, for just a little bit. 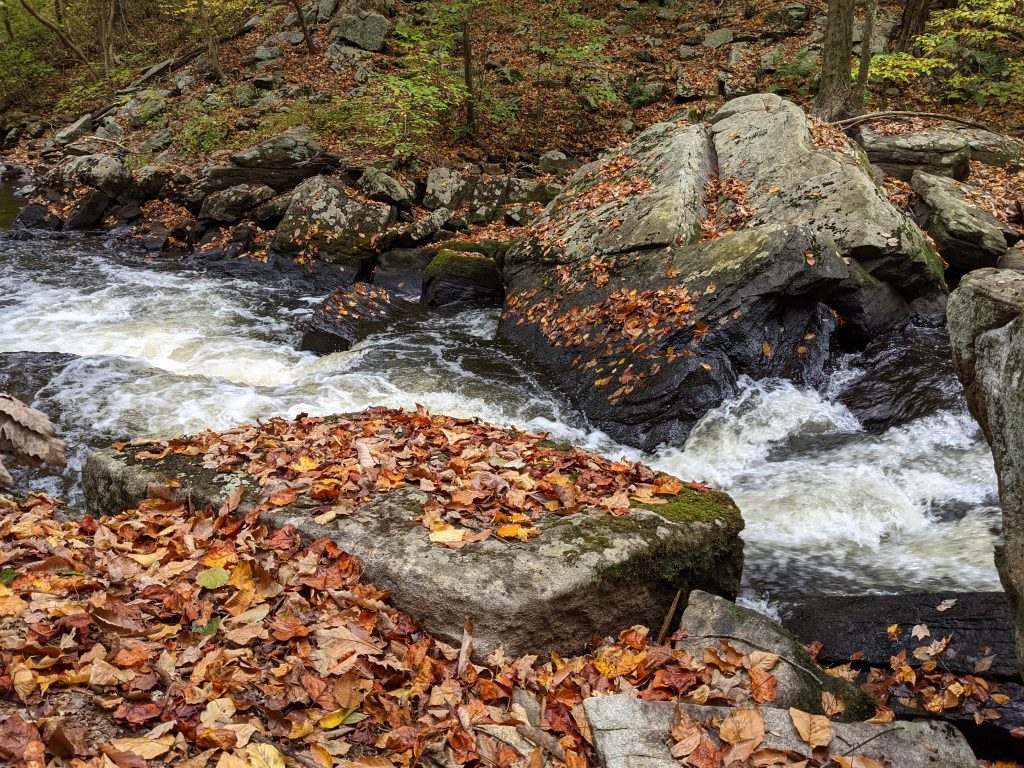 Then, it’s off into the woods.  Almost immediately, there’s a steep climb up a hill, and as the hill is not large, a decent on the other side before coming to Pottersville Road.  Cross the road. 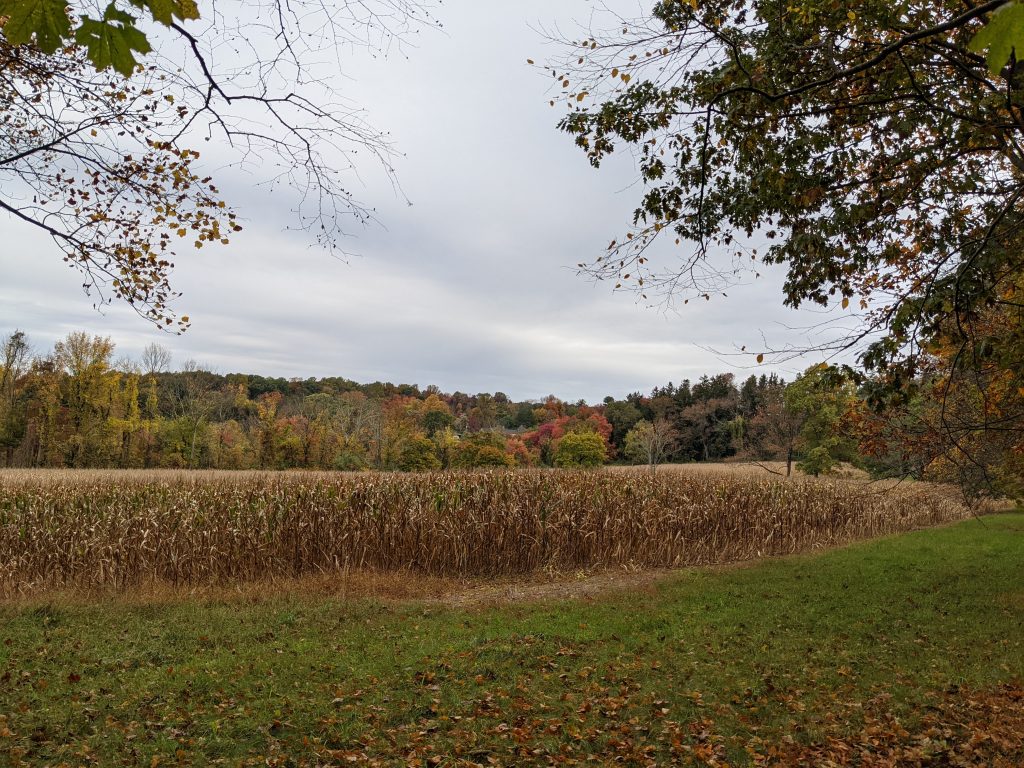 Following Red, there will be another hill to climb.  At the top of this hill is the junction with the Patriots Path and signs with actual trail names.  This would be my highest elevation.  Patriots Path meanders back to Pottersville Road, where there is a short road walk.

Eventually, Patriots Path turns left into the Elizabeth Kay Environmental Center.  Here, the sun was trying to come out and it helped a little with the colors. 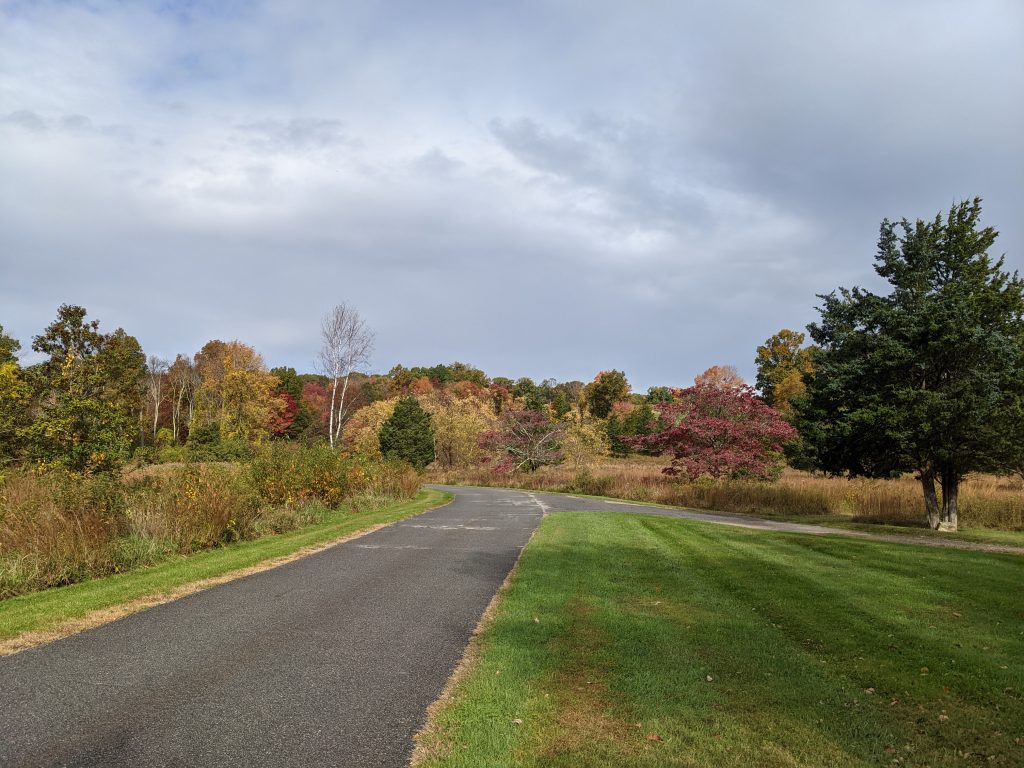 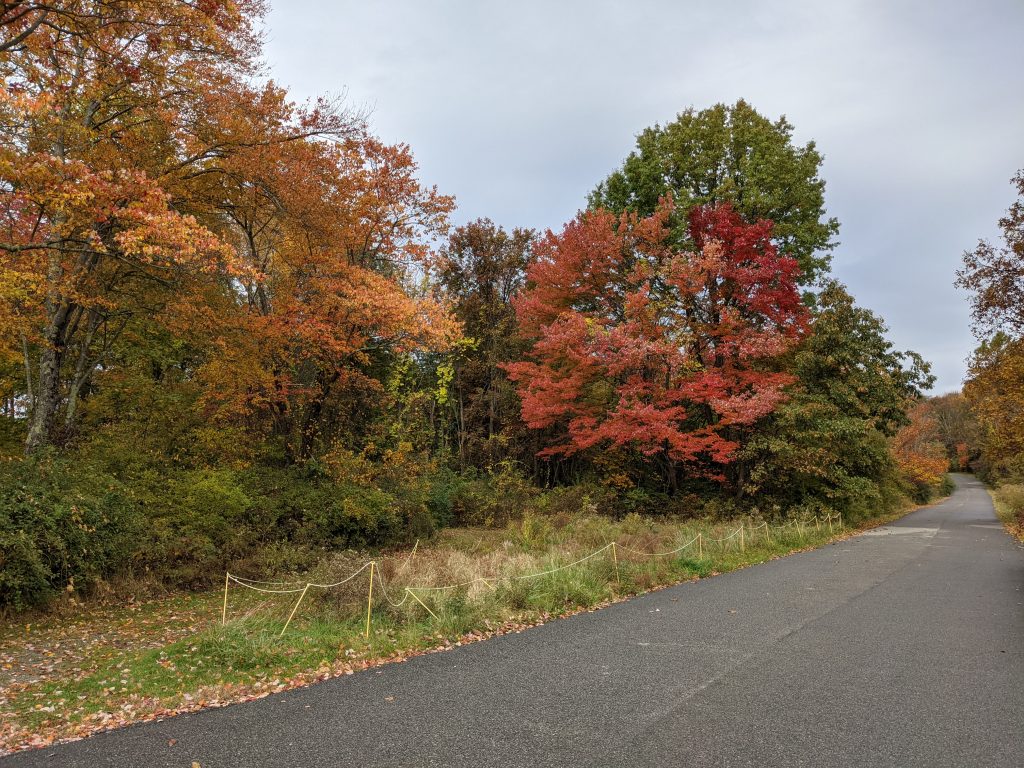 Behind the Environmental Center I picked up the Patriots Path and followed that all the way back to my car, eventually junctioning with the trail where I started my loop.  Along the river I saw a fisherman pull out a good-sized trout which was cool to see. 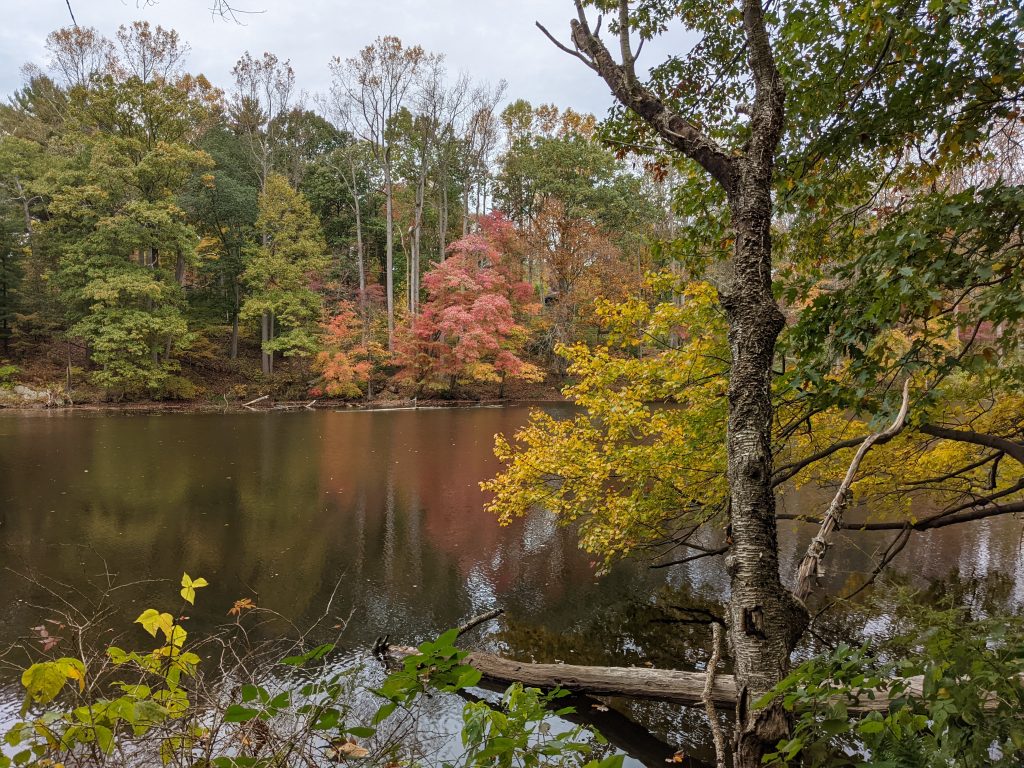 I did not see many people until I got near the Environmental Center, but I suspect the pick-your-own apples farm just near the Cooper Gristmill is where a bulk of the people were on this great Fall day.  I recommend this hike for a great walk along the river with a couple of hills to make you work.  It would be worth coming back in the Summer to be able to stop along the river and cool off in the pools. 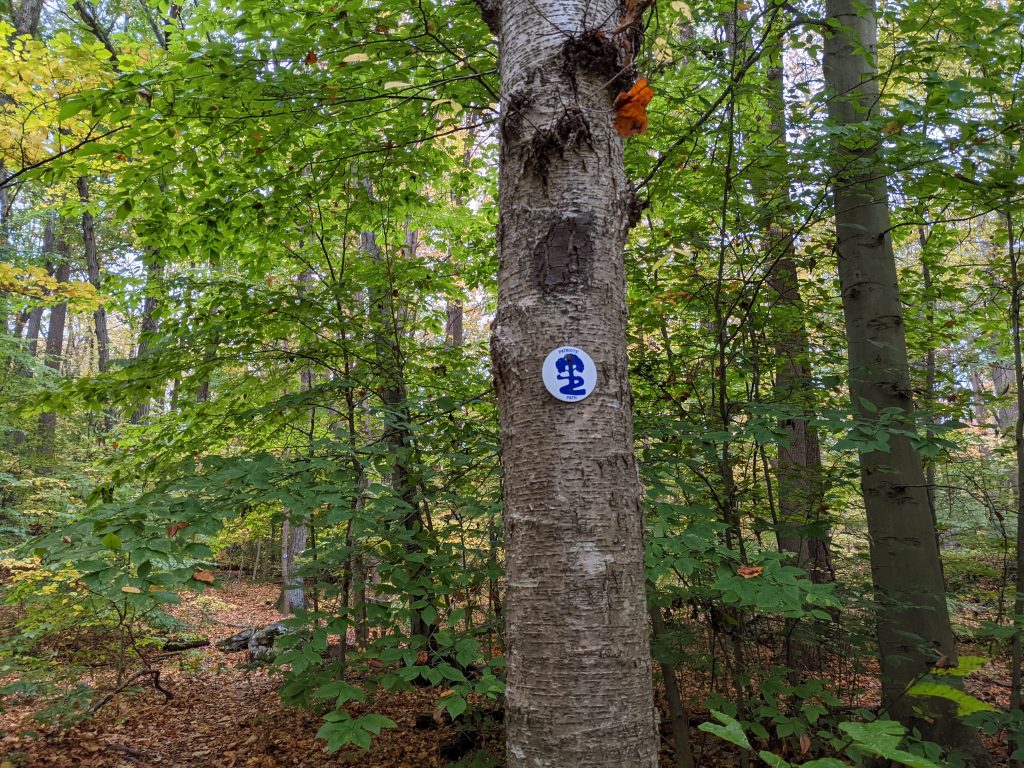 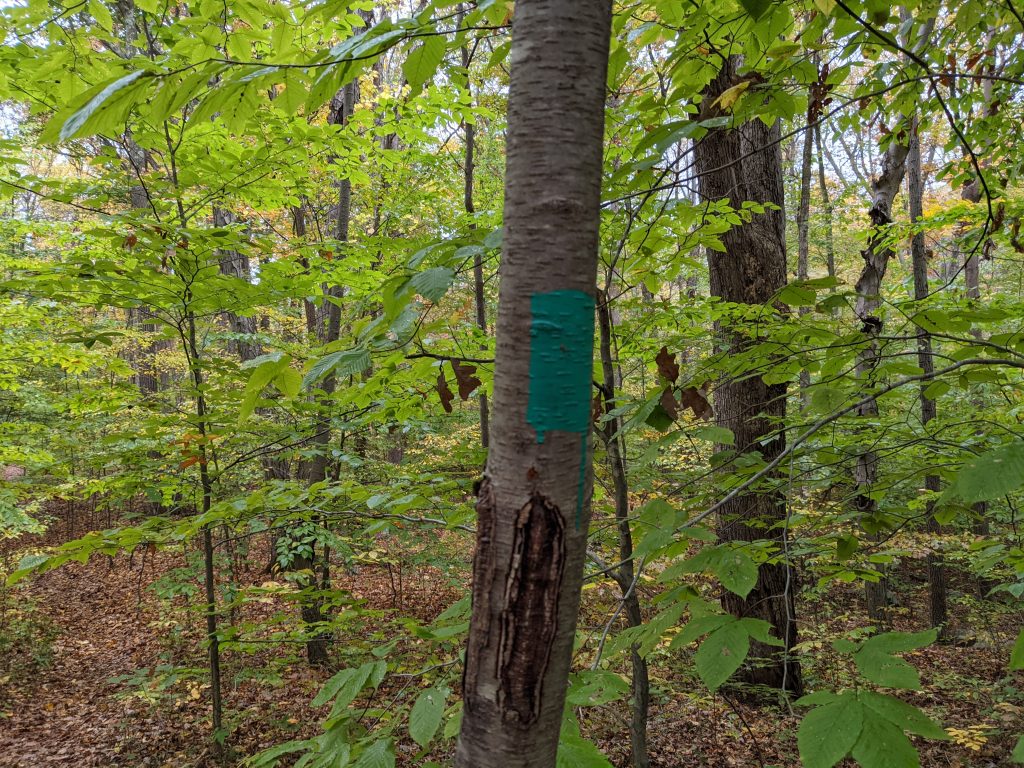 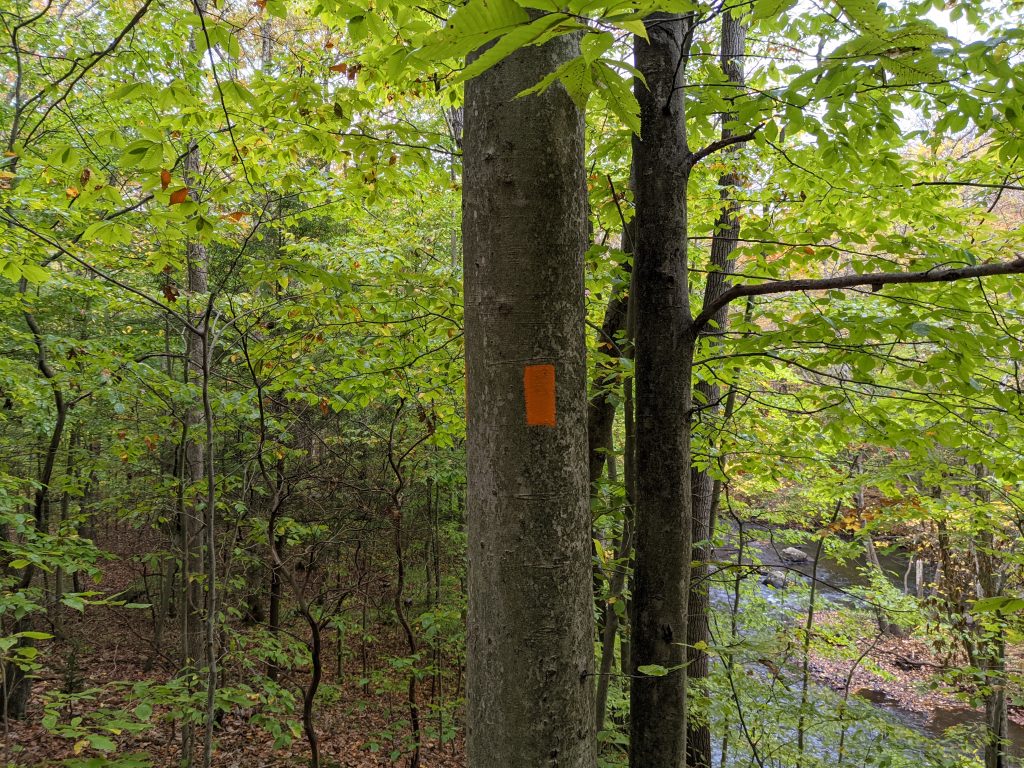 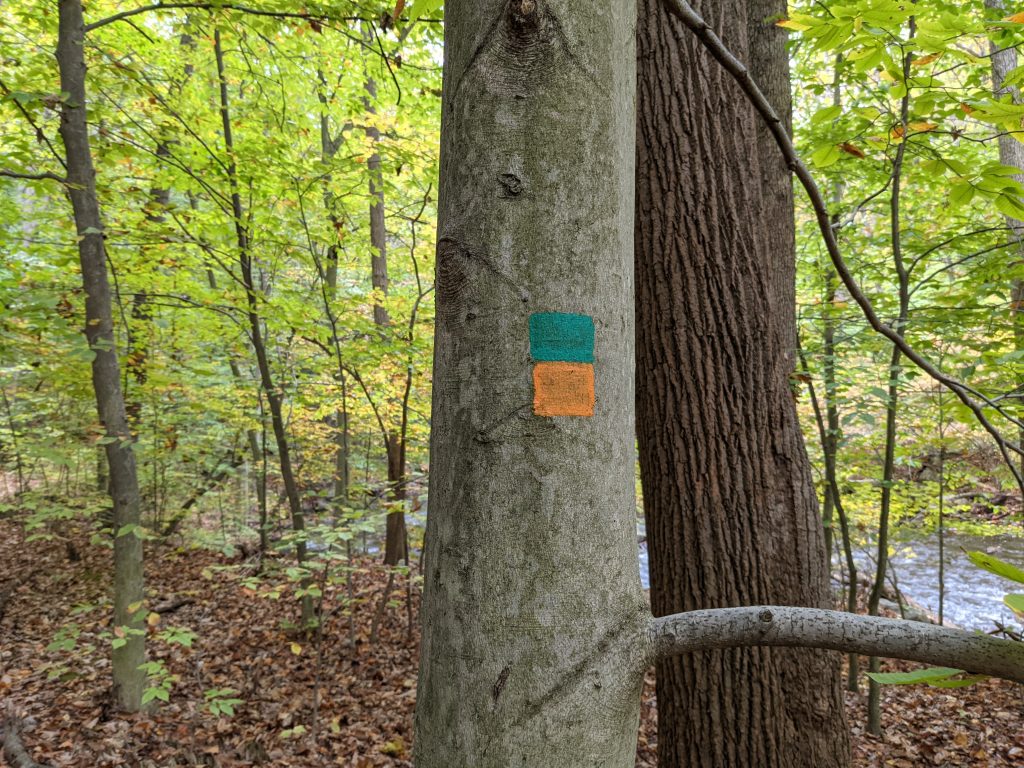 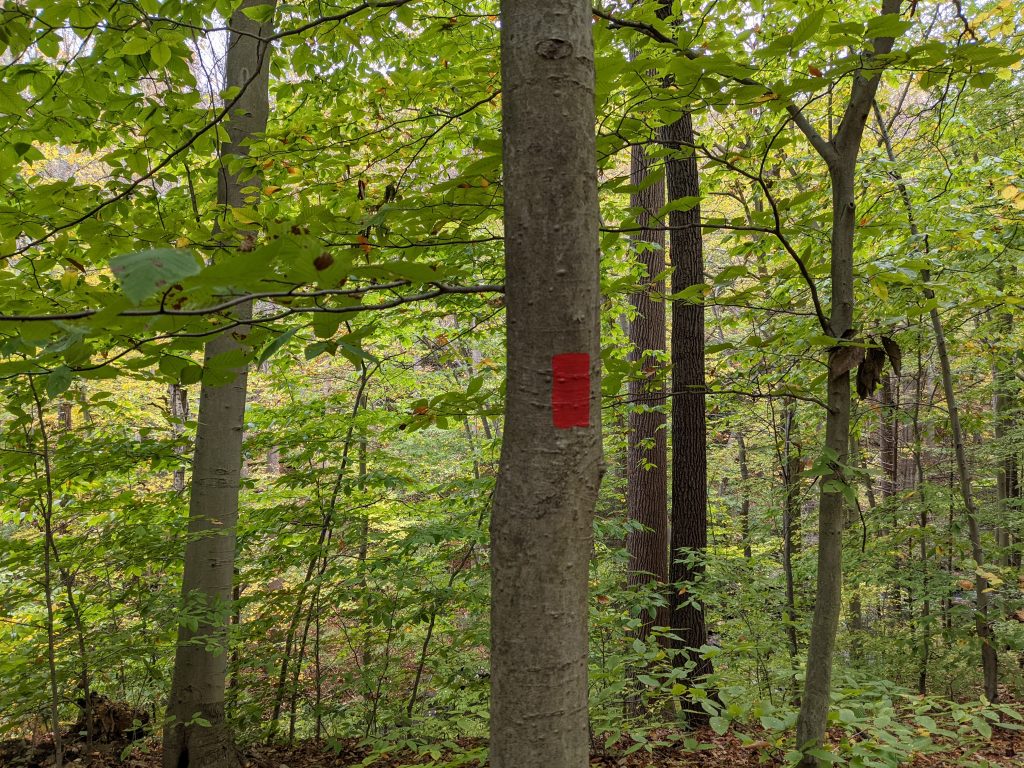