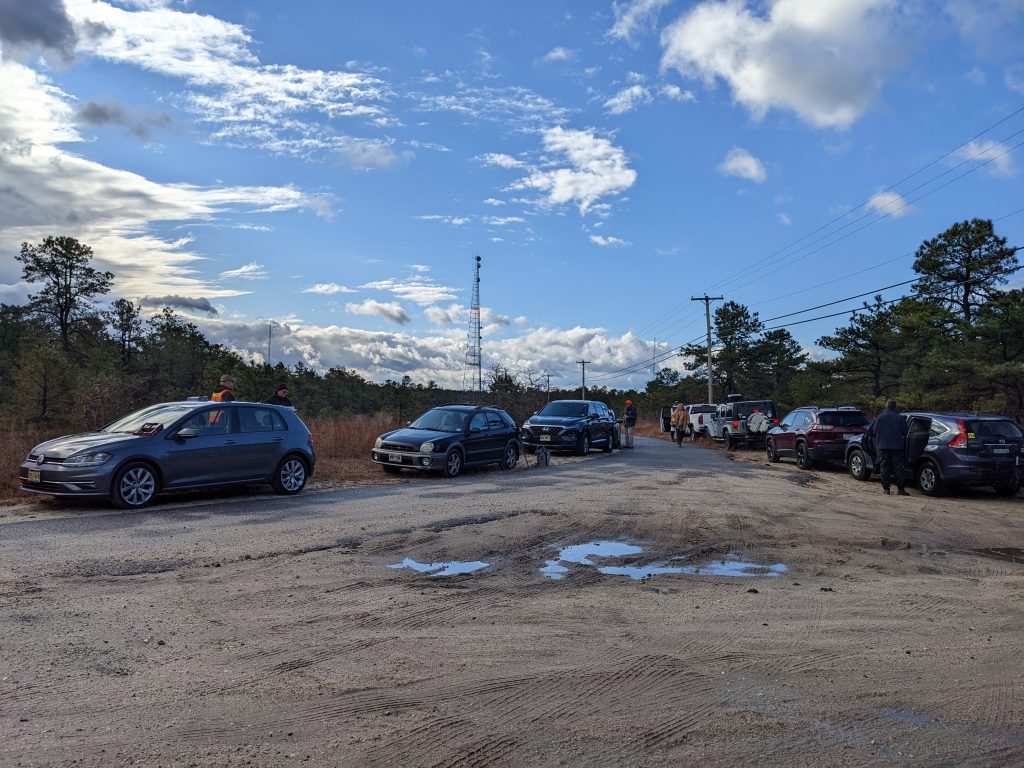 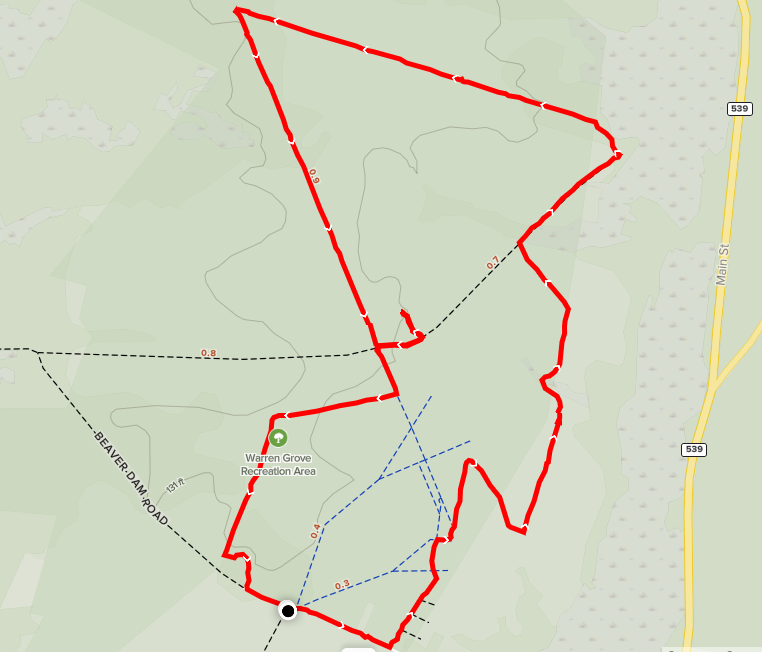 It had been two weeks.  I needed to get back out.  I looked forward to this hike because I had signed up with the State Forestry department; I think the hike technically was run out of the Bass River State Forest office.  Our guide was Eric – who had free snacks and lots of information for us before we trudged off.  Parking is at the intersection of Beaver Dam Road and Fire Tower Road (hence the picture at the top of the post.)  No trail kiosk.  No blazes.

I signed up for this hike as it was advertised to walk along the “historic Keith Line” which I had never heard of.  Also, we were to traverse the Pine Planes where we would encounter Pygmy Pines.  Again, I had no idea what they were either.  The chance to jump on a hike with a guide in an unfamiliar area and learn some history was one I was not going to pass up.

Right off the bat, before any hiking commenced, our guide gathered us to show us Broom Crowberry, a somewhat endangered plant that just happens to have a large population right where we parked.

After that, our large group of 25+ headed off.  All of the walking was on woods roads, fire roads, prescribed burn cuts, and the famous Keith Line; with the exception of one trail that cut through Little Pine Plains.  At our first “junction” where we stopped to gather everyone up, I took a picture of what “typical” Pine Barrens trees look like. 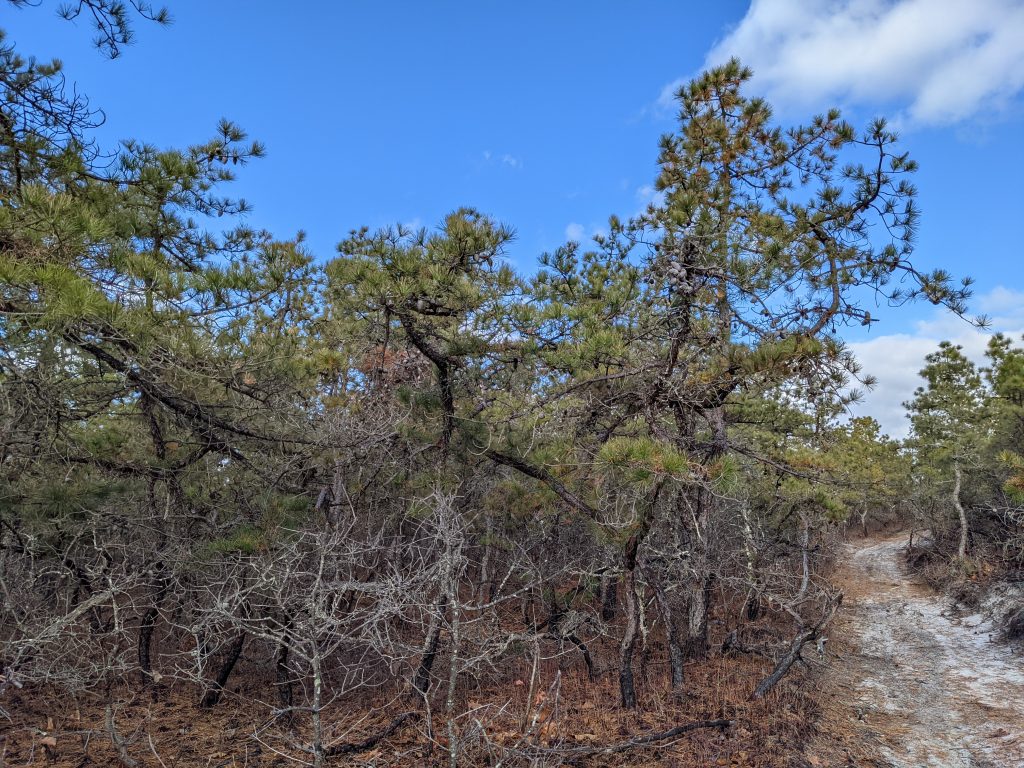 A little further down, we turned onto a “trail” used for prescribed burns; where fires are deliberately set, in order to restore health and to build fire boundaries for the fires that start naturally.  You can see where the fire has occurred in the following picture. 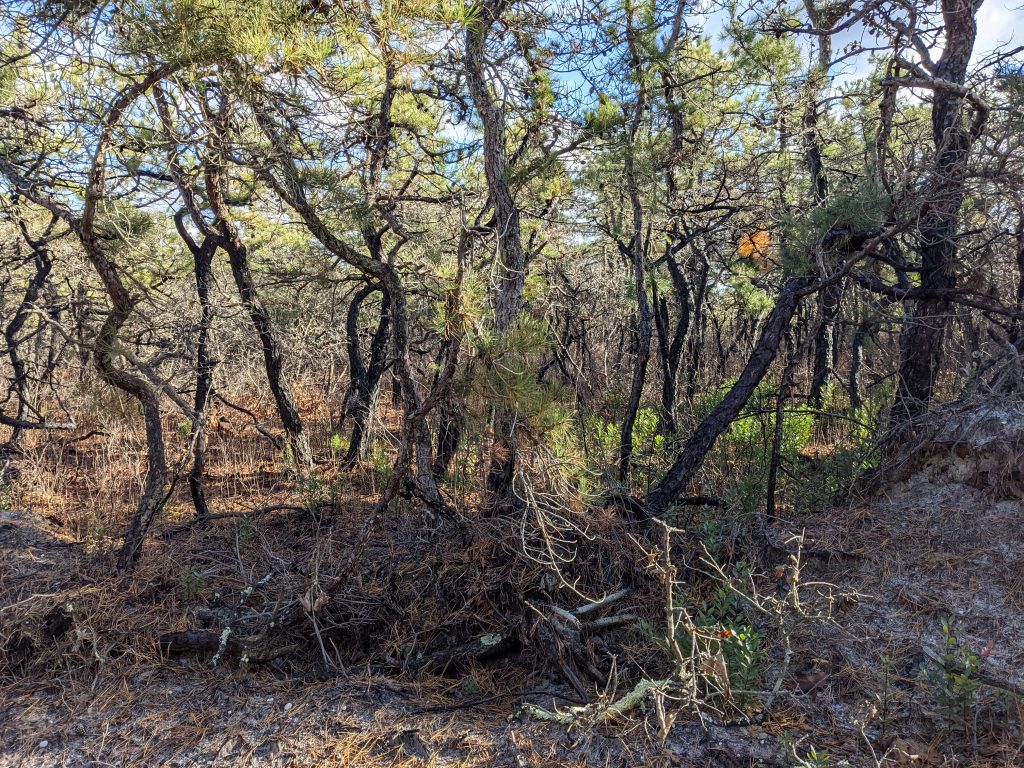 Lots of Eastern Teaberry grows….all over, with the red berries easily found. 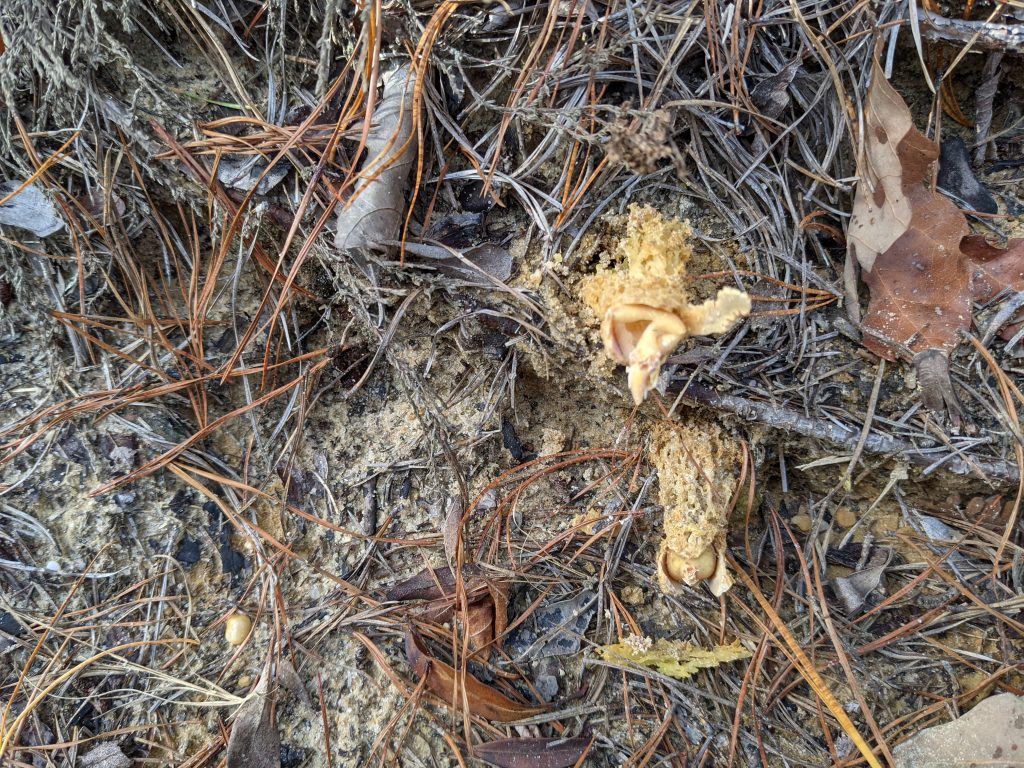 After a short walk, we turned off the sandy road and headed “into the woods.”  We were told to space out and not hold branches for the people behind, as they inevitably snapped back and whacked the person following pretty good.  The person in front of me did it often.  I learned to follow at a great distance.  This part of the trail was very narrow, and there were times I (deliberately) lost the person in front of me.  Fortunately, there was no place else to go, and the trail was easily identifiable.

In the morning I drove down to the trailhead in rain, and the forecast called for early morning rain.  Fortunately, the sun came out and it was pretty nice.  The wind howled at times, but in the trees, you really didn’t feel it. 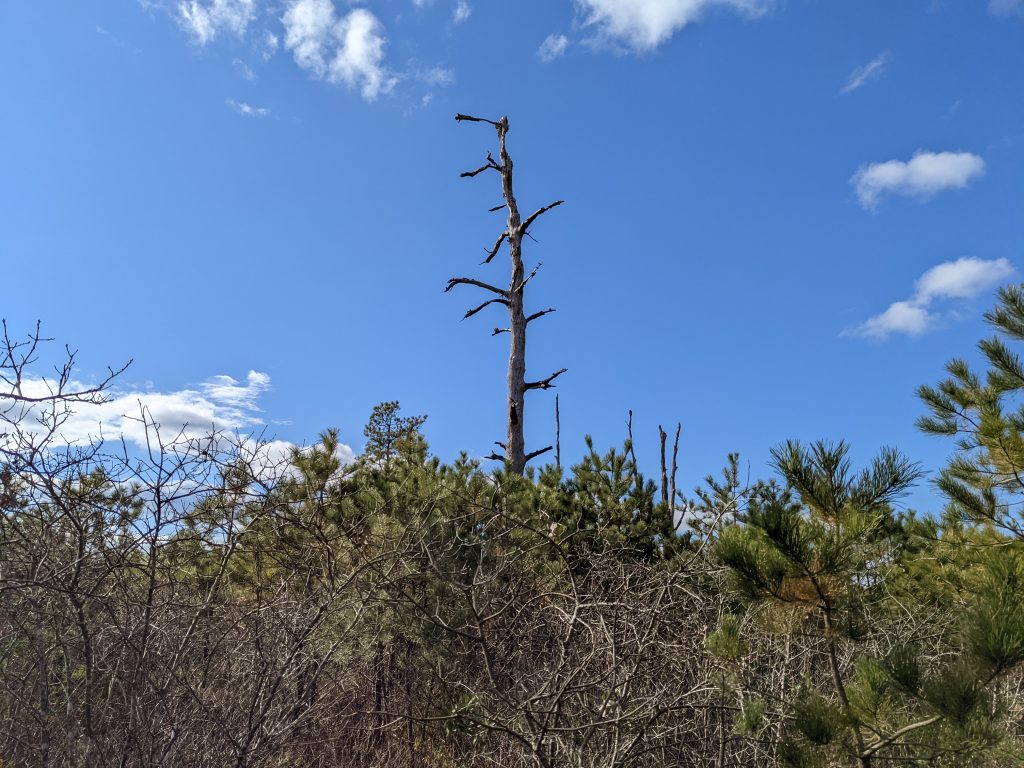 As I understand it, Pygmy Pines are mature pine trees that do not grow tall like the pitch and scrub pines and oaks you see throughout the Pine Barrens.  Scientists do not know for certain what stunts the tree growth:  is it poor soil, insect damage, minerals in the soil?  There is no definitive answer.  But the trees are unique.  Many trees are not much taller than the people walking by. 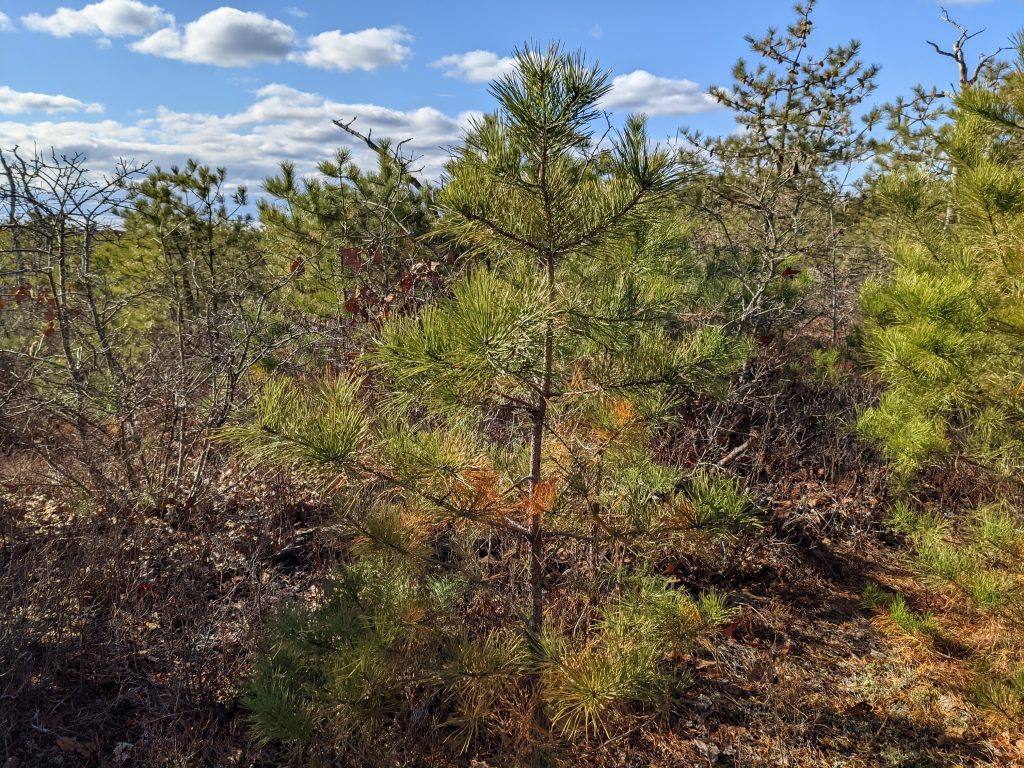 I got the sense I was walking in a really big Charlie Brown Christmas Tree farm. 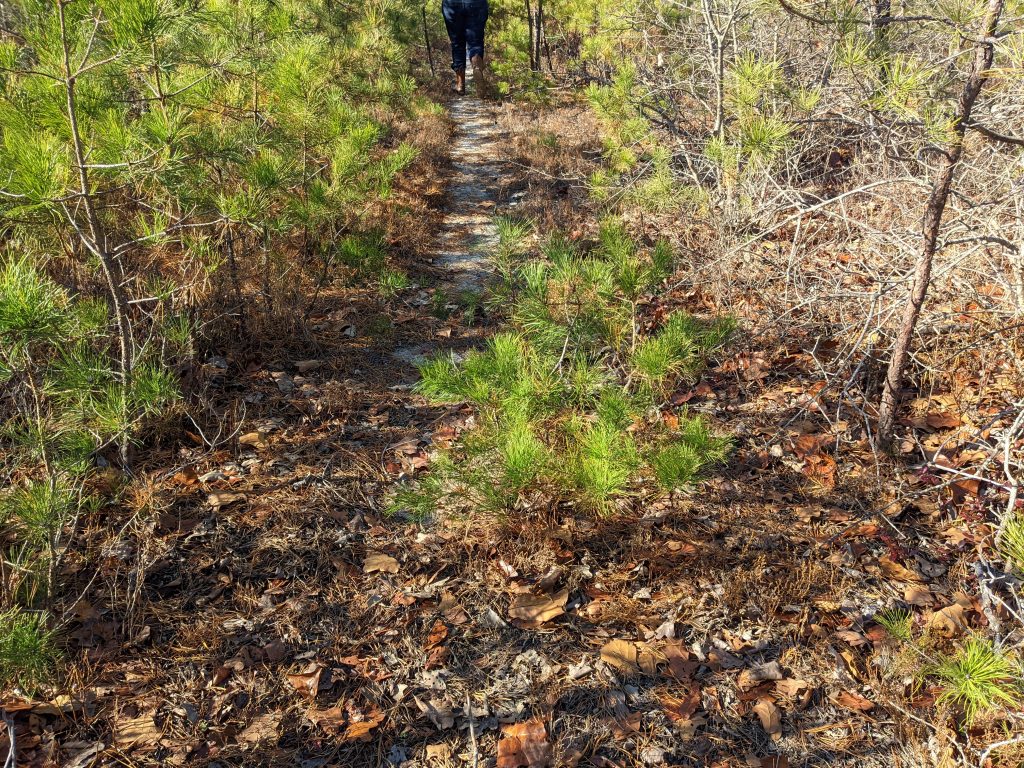 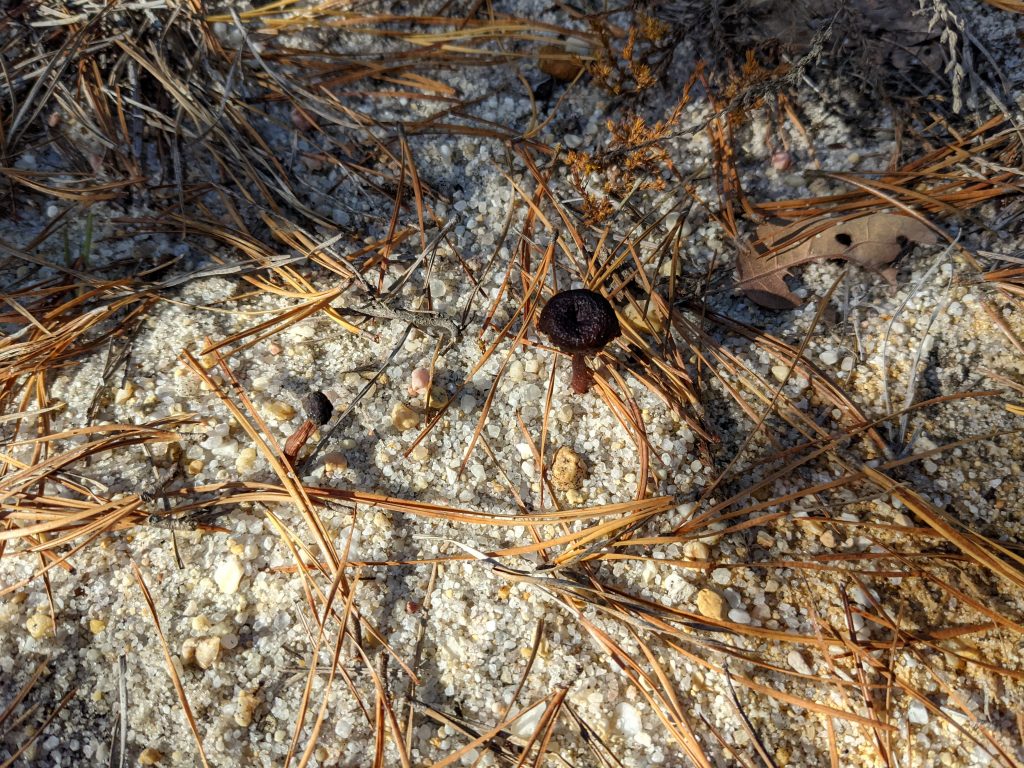 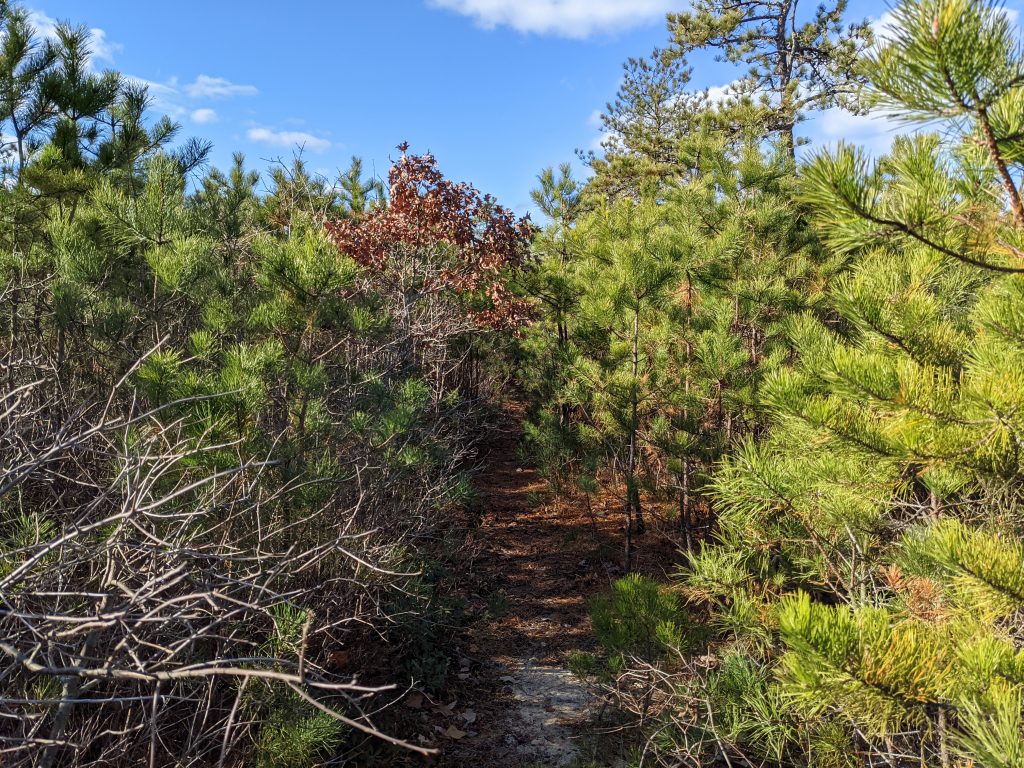 After coming out of the Little Pine Planes, we headed on the southeast leg of our loop; and this section would be on the Keith Line.  The Keith Line is a path that was created in 1686 by George Keith in an attempt to mark the official boundaries of East and West Jersey.  The Line starts in southern Ocean county, borders Ocean and Burlington County, then goes through Mercer County before continuing on the border of Somerset and Hunterdon counties.  It was succeeded by two other lines (Thornton and Lawrence) with the Lawrence Line becoming the more “official” boundary.  Parts of the Keith Line are actual roads, some of it is fire/hunting roads, and some of it is more like a trail.  Here’s a picture where we joined the Line to head southeast – the picture is looking northwest. 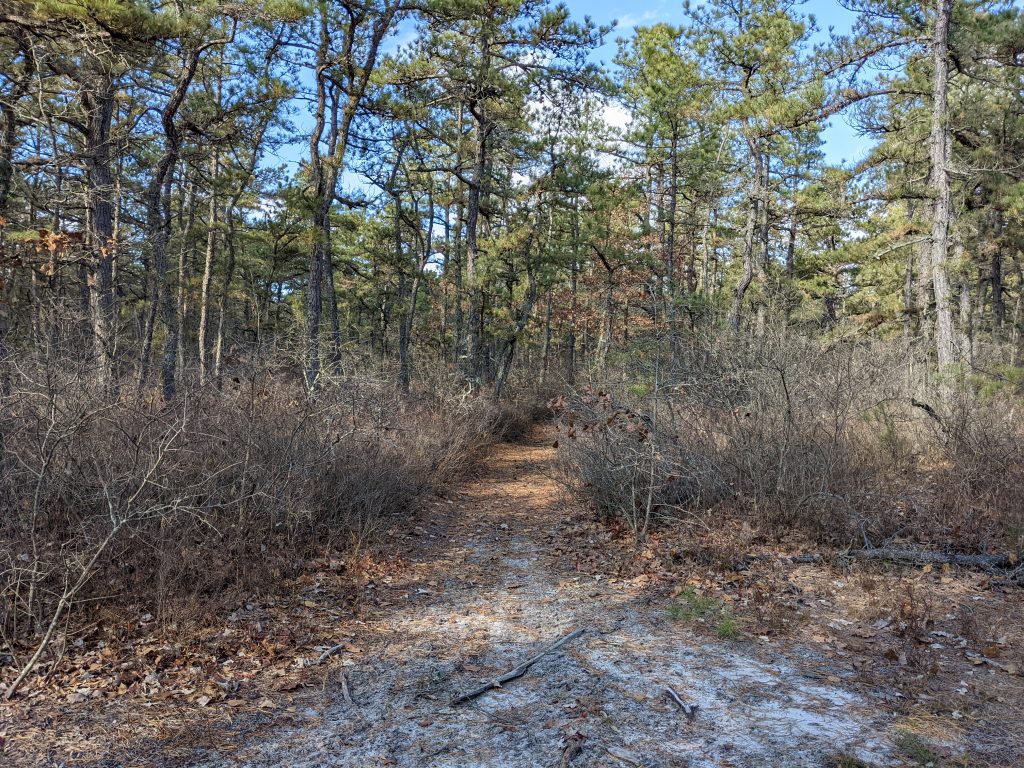 After about 100 yards, there was a good spot to see the difference between Pygmy pines and the normal pines that grow throughout the Pine Barrens. 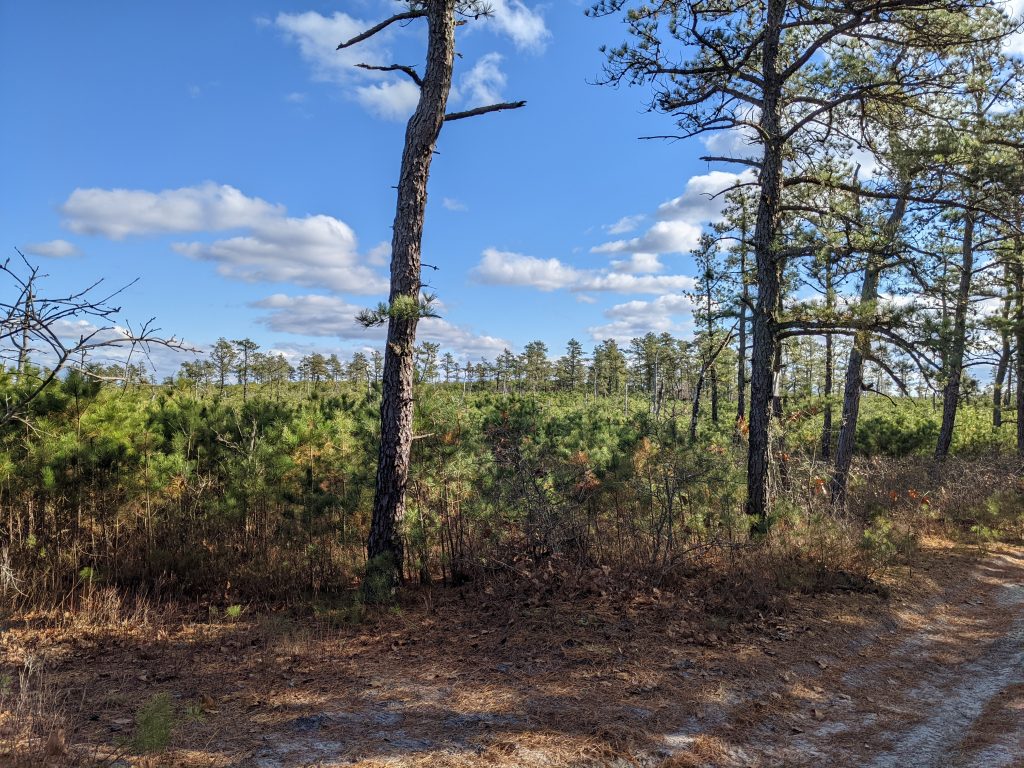 Our guide did not have an answer to why there are islands of normal pines growing within the Plains of Pygmy pines.

After about a mile, we stopped at a junction, where we would take a small detour.  After walking down a woods road, we made a hard left into the trees.  Then headed UPHILL! I was not expecting this – and the hill was small (relatively,) but huge in the context of the Pine Barrens.  At the top was gorgeous overlook….with Little Pine Plains right in front of us, and the tall trees all around the plains. 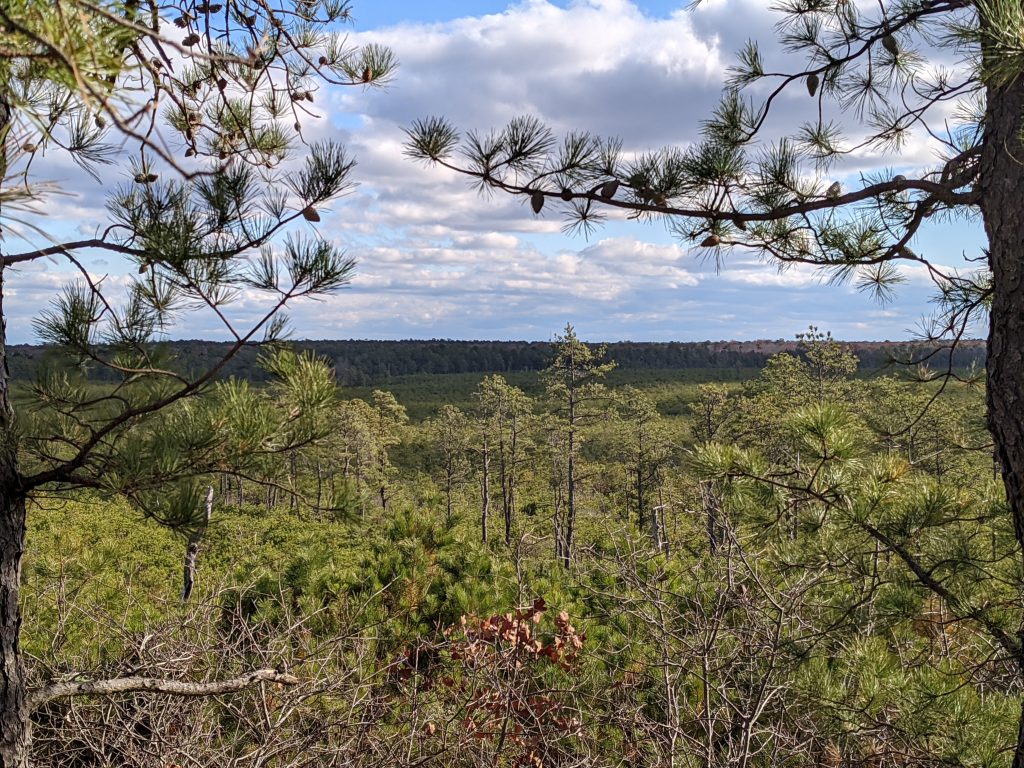 I never expected a view like this.  And even with all the other interesting facets of the hike, this was probably my favorite part.

It would be a mile or so of a hike out, back to the cars.  The sun went behind the trees and it got colder.  Here’s one more shot of recent fire activity. 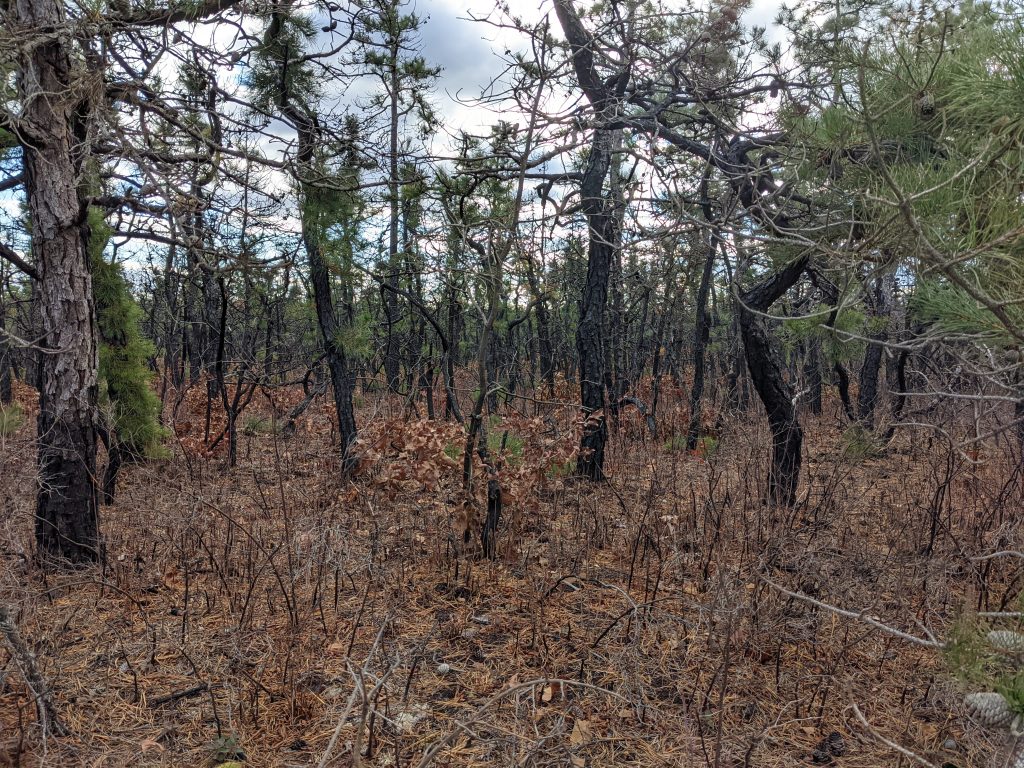 This was a really great hike.  I couldn’t duplicate it.  The early part had lots of turns that are not marked.  Maybe I could follow my previous track, but I wouldn’t want to get lost.  I’m pretty sure I could get back to the hill, as that was on main hunting/fire roads.

The hiking was not strenuous, relatively.  However, you’re walking on sugar sand, with minimal elevation changes.

I highly recommend this hike when it gets offered.  Bear in mind this is not done in the summer, the heat would be unbearable – along with the ticks or chiggers.  Also, when I registered, I was told this was a six mile hike.  Some people thought it was only 1 mile…..the brochure said “hike along 1 mile of the Keith Line.”  So there were some that definitely were not prepared.  Further, the hike was done twice – I opted for the early hike.  A second hike ran at 2:30….and I question if they finished before dark.  I wouldn’t want to do this at dark…..the Jersey Devil is out there.