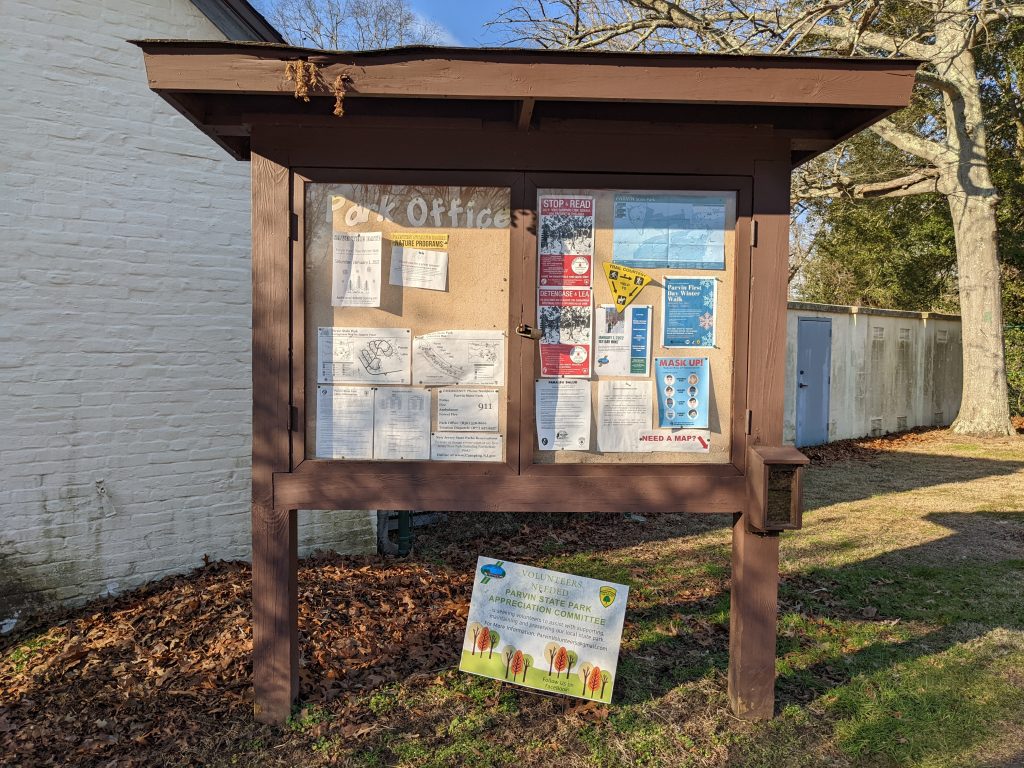 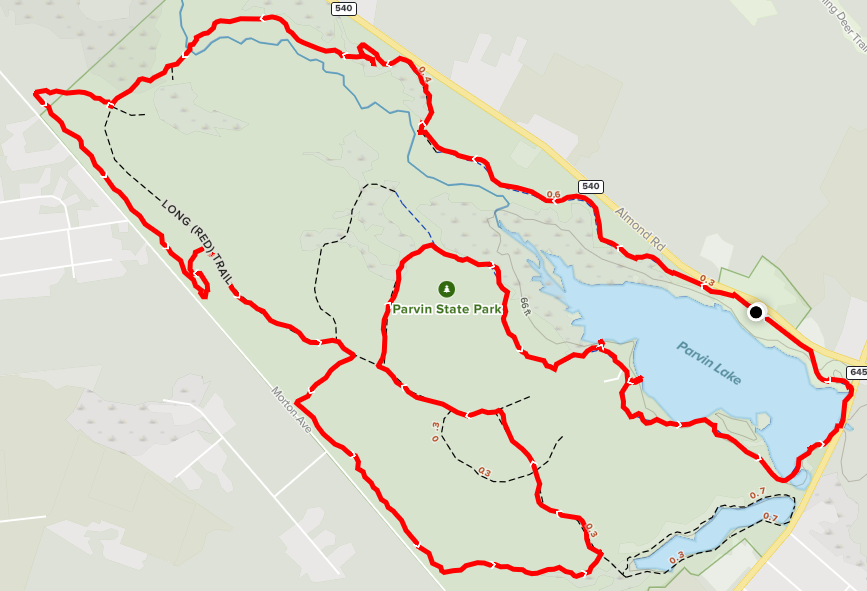 A note on my map, at the top left, I got off the Long Trail somehow, and ended up on the Black Oak trail, which is supposedly a horse trail.  When I realized I was on the “wrong” trail, I bushwhacked back to the Long trail, and pressed on.  I came to a connector trail, and because it was so nice, I decided to add miles and go back to the Black Oak trail.  Don’t follow my map….pick a saner route.

Last week it was 24.  Today:  54 at the trailhead, and 61 when I got back to the car.  There was no way I was NOT going today.  Especially since there is a chance of snow tonight.

All the trails were wide and flat, for the most part walking on sand and pine needles.  I walked almost all of the trails, and there is quite a bit of diversity around the park.  There is also quite a bit of history in the area, as it was developed by the Civilian Conservation Corps.  Many trails have interpretive signs along the way.

No blooms yet (it IS February) but the perriwinkle are out. 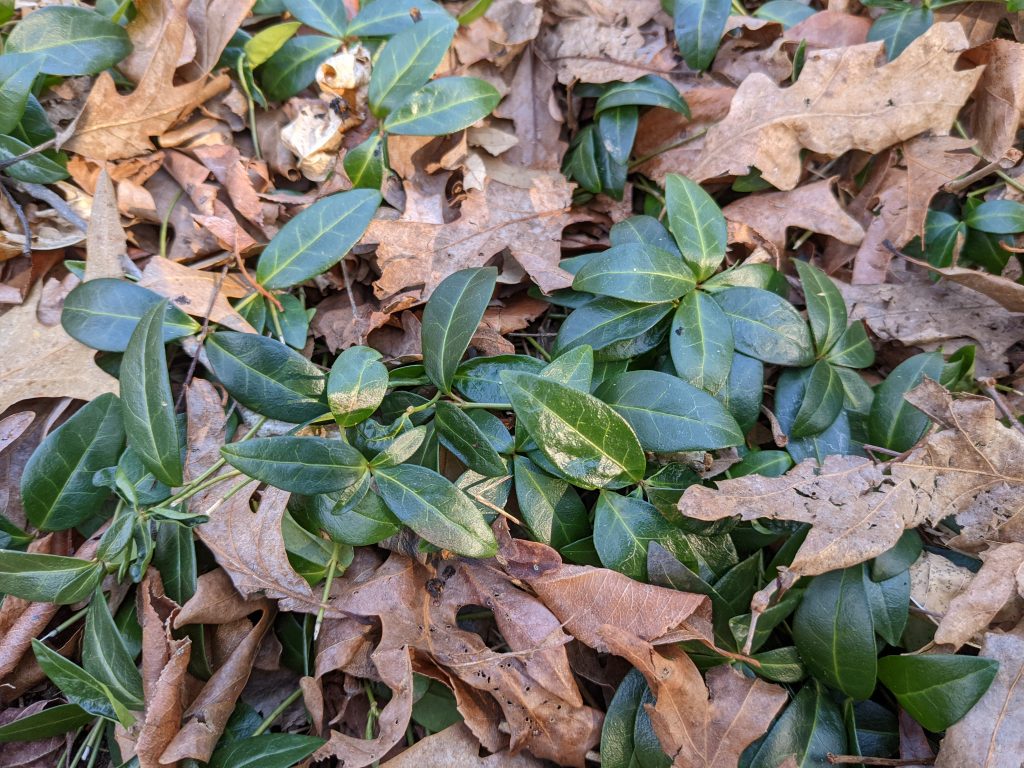 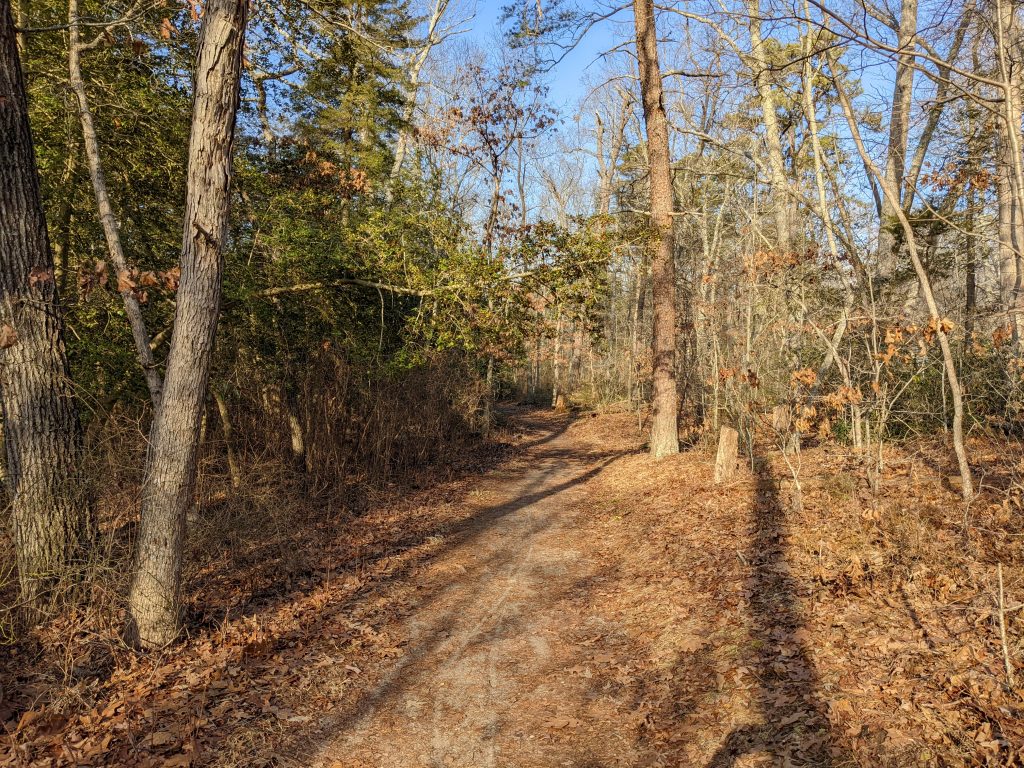 This one was a new one for me, and it was all over the beginning of the trail. 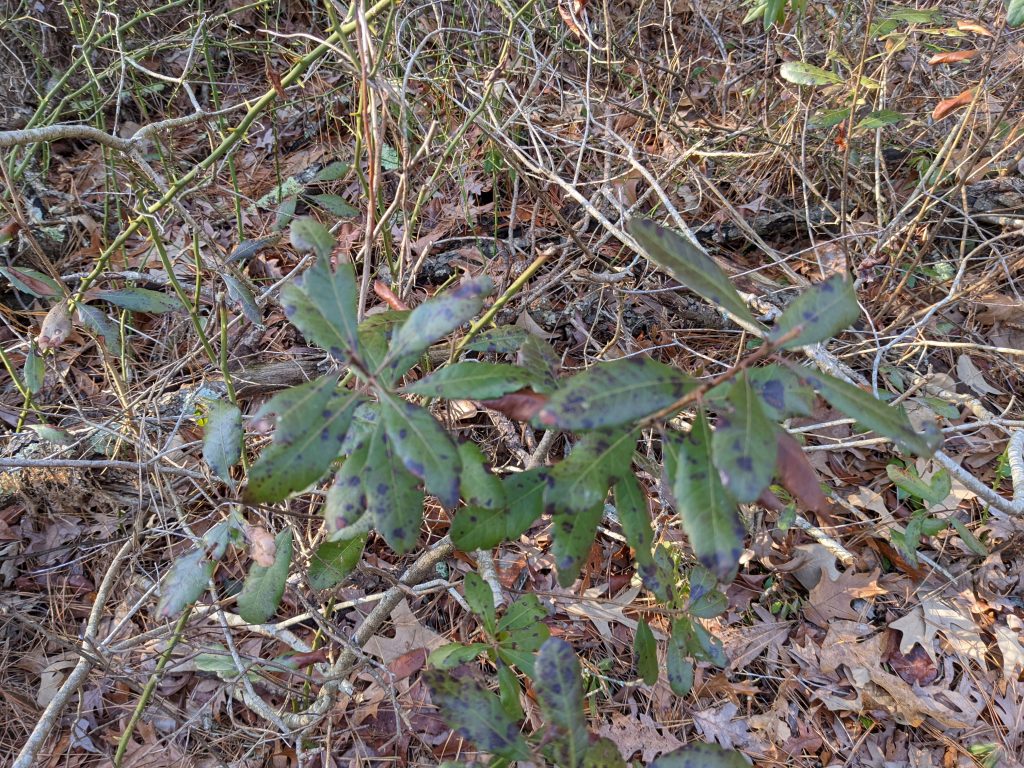 Just before the junction of the Long Trail, and the pavilion, a short spur trail dropped down to Muddy Run; which eventually feeds into Parvin Lake. 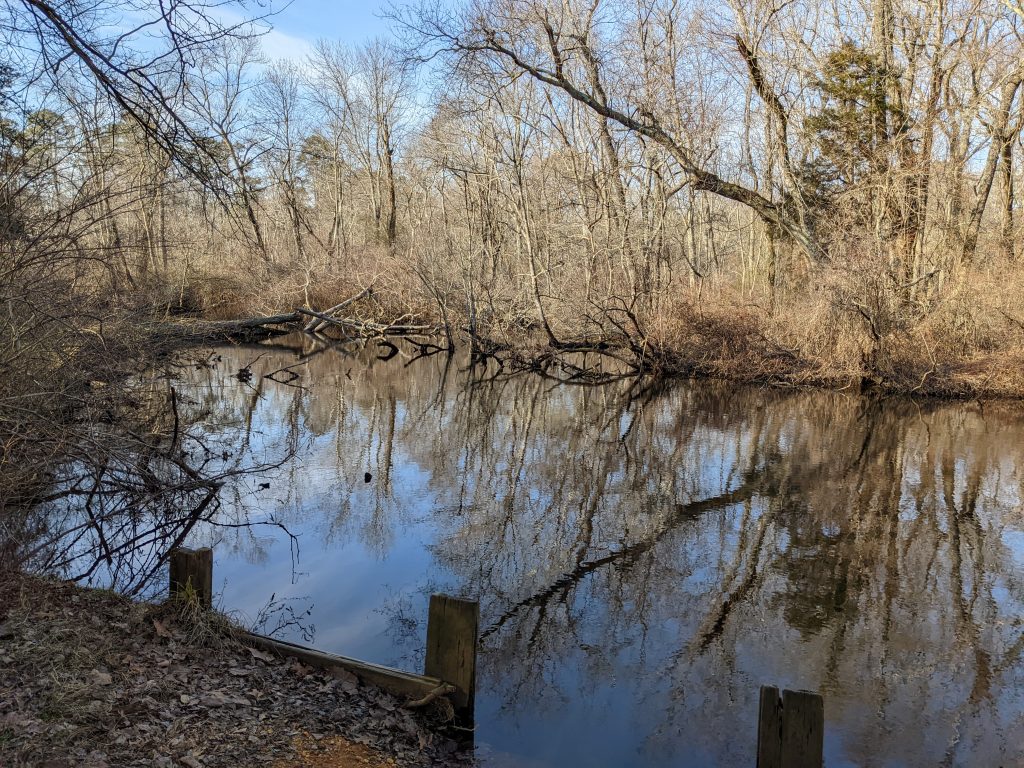 I had planned the entire time to take the short Nature Trail which branched off the Long Trail.  When I got to the junction, I found I had no choice anyway. 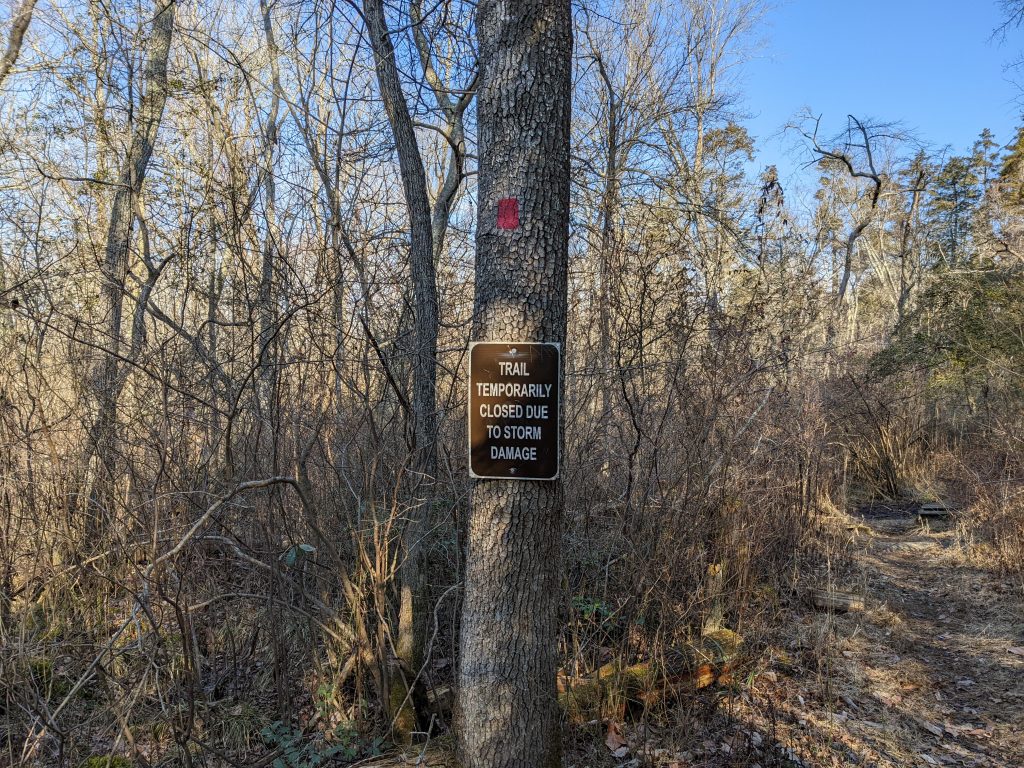 When the Nature trail joined back with the Long Trail, it was obvious that there was much storm damage.  Many of the boards had been moved away from the little creeks they crossed.  At least once I closed my eyes, jumped and prayed I made it across.  And more than once I almost got pretty wet.  This was the only section of the day with any significant mud and wet trails.

It’s hard to tell in this picture, but there are A LOT of leaves on the trail. 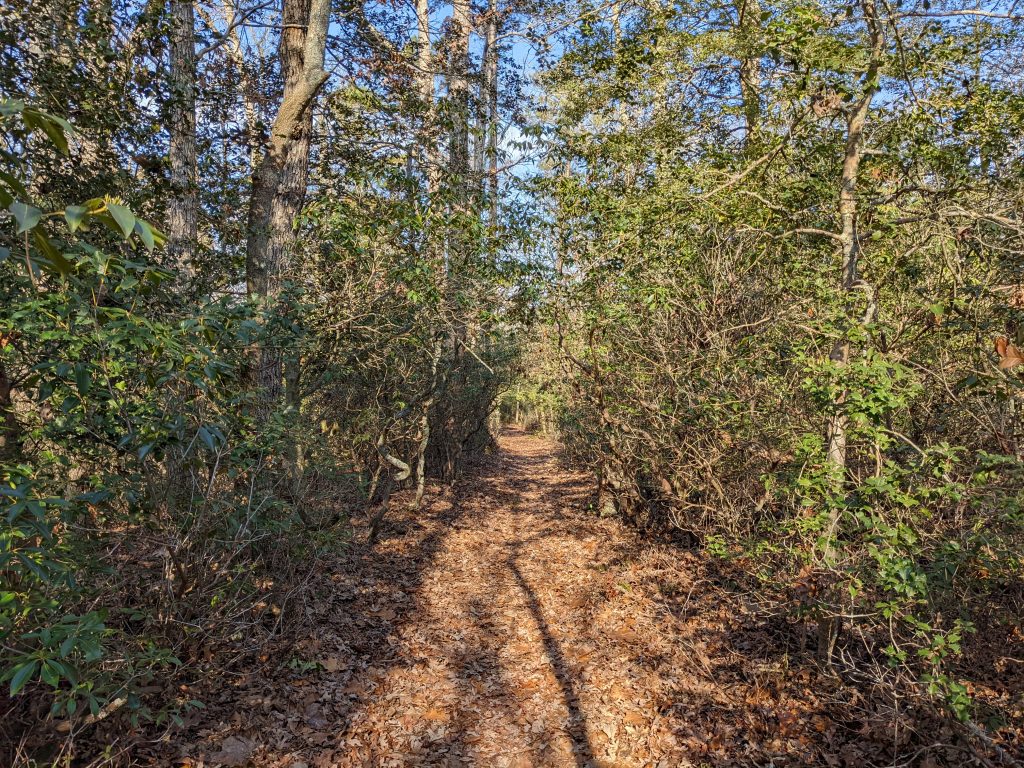 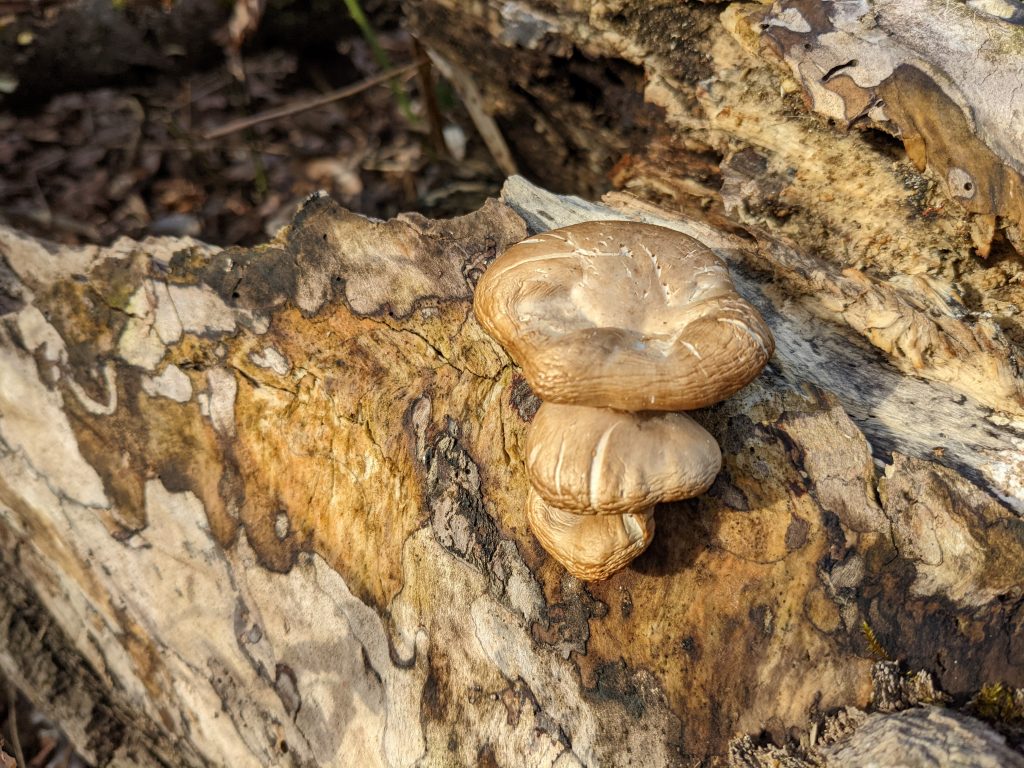 I had to cross Muddy Run again.  Muddy Run is pretty wide and deep, and at some spots appears to move pretty quickly.  This bridge would be the last time I crossed.  Though, the bridge was a little more rickety than I would have liked.  And if there was a troll underneath, that wouldn’t have surprised me either. 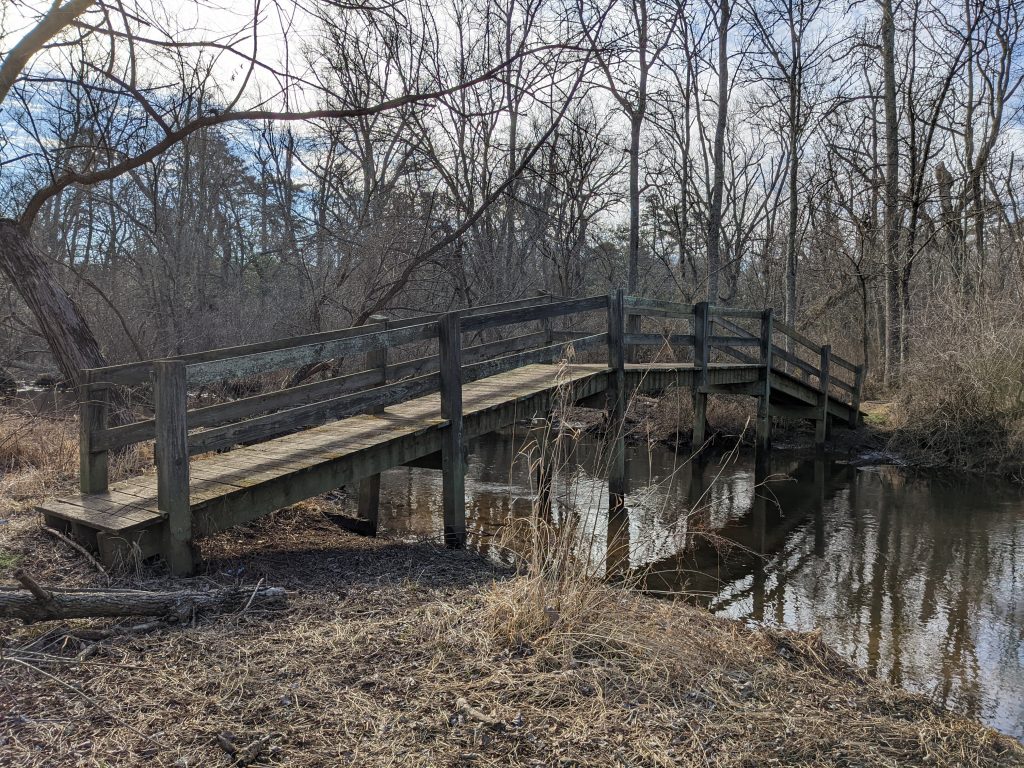 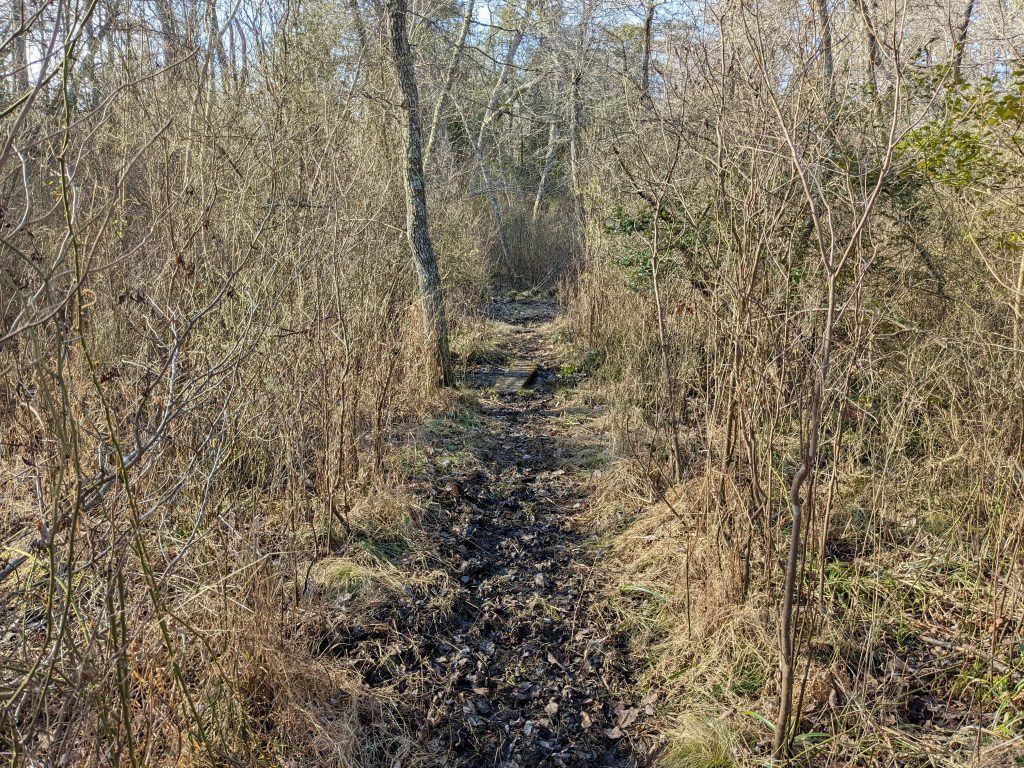 (Those boards near the top of the picture were not very secure.  This section of the trails needs a little work.)

After coming out of the wetlands, the trails reverted back to wide and flat.  And in the sun it was perfect.  It was easy walking, and after bushwhacking for a bit, I decided to add some more miles.  (That doesn’t always work out the best for me.  It was fine in this instance.)

There’s a nice campground in the middle of the park and right by the lake.  I stopped to have a snack at Jagger’s Point, which had a big fire ring.  The geese were making a tremendous racket here. 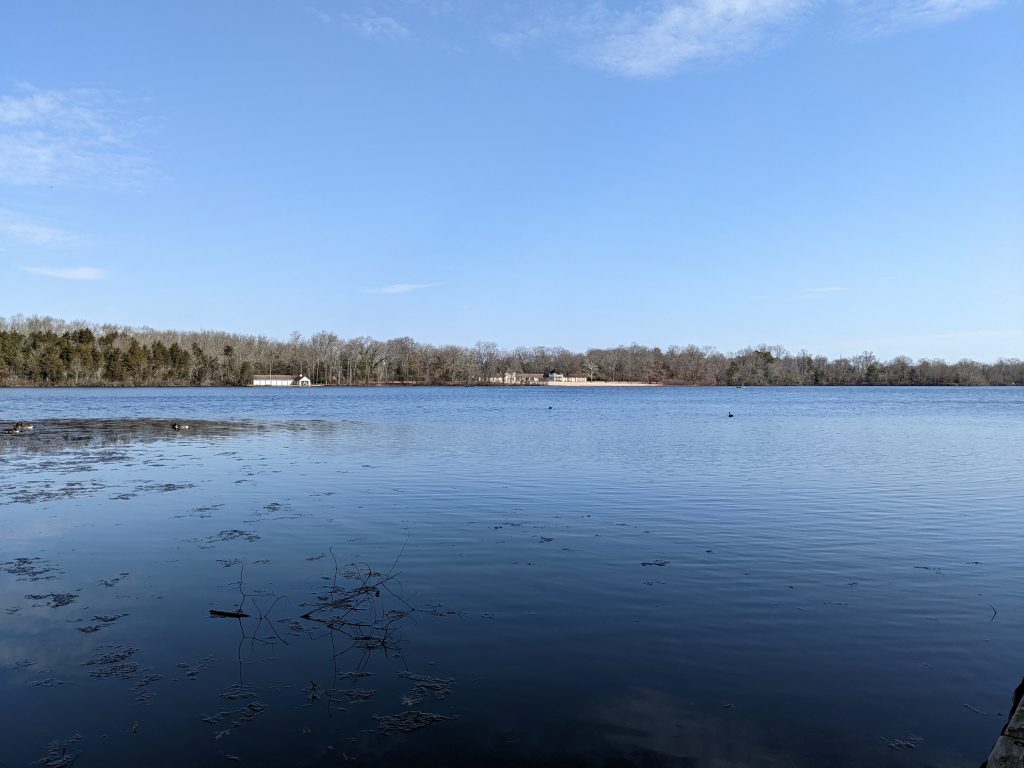 From Jagger’s Point it is a quick mile back to the parking area.  There’s a nice bridge that crosses right in front of the falls. 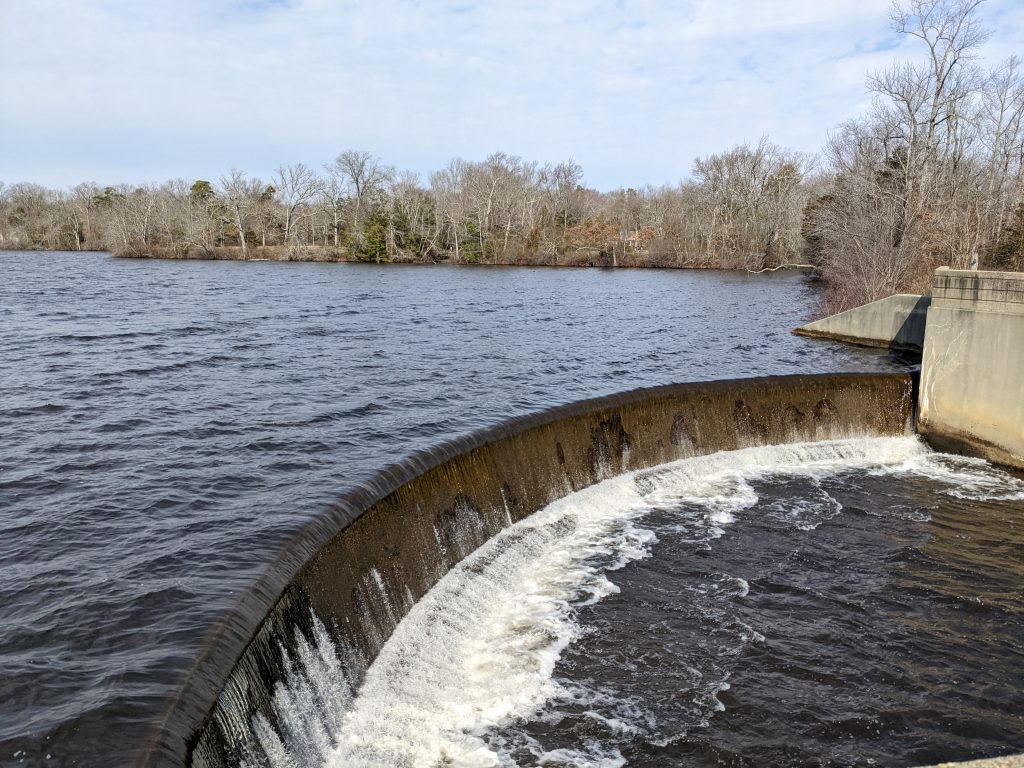 And from there it’s a short walk back to the offices. 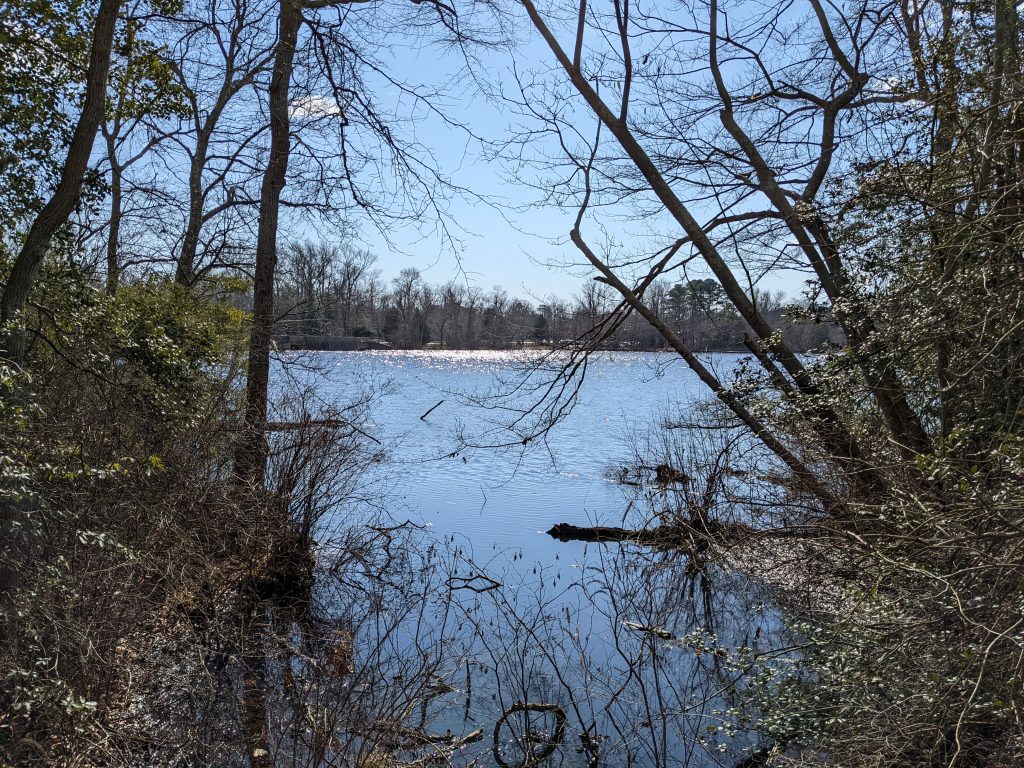 I was the fourth or fifth car in the parking lot when I arrived just before 9:00 in the morning.  When I got back, the lot was mostly full.  I can imagine during the summer months it gets very crowded as the Day Use area has a large beachfront.

(A quick note on the blazes.  Oddly, all the blazes on trees were at about ten feet off the ground.  I’m used to seeing them about head high.  This is the only park I’ve been to where the blazes were that high.) 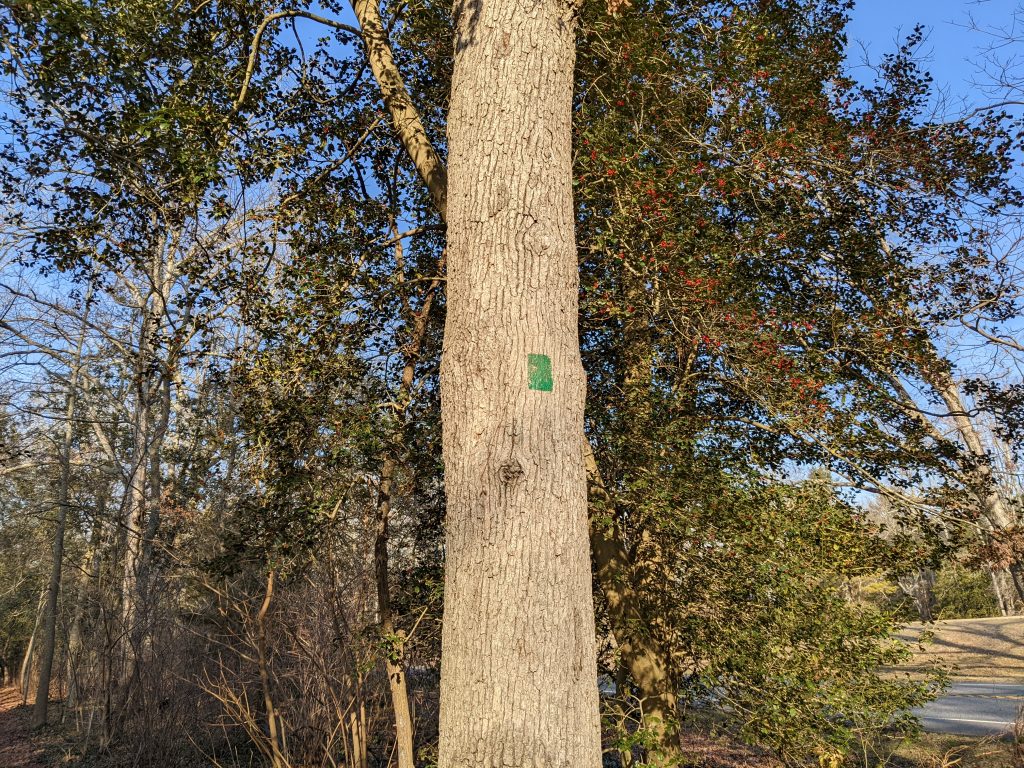 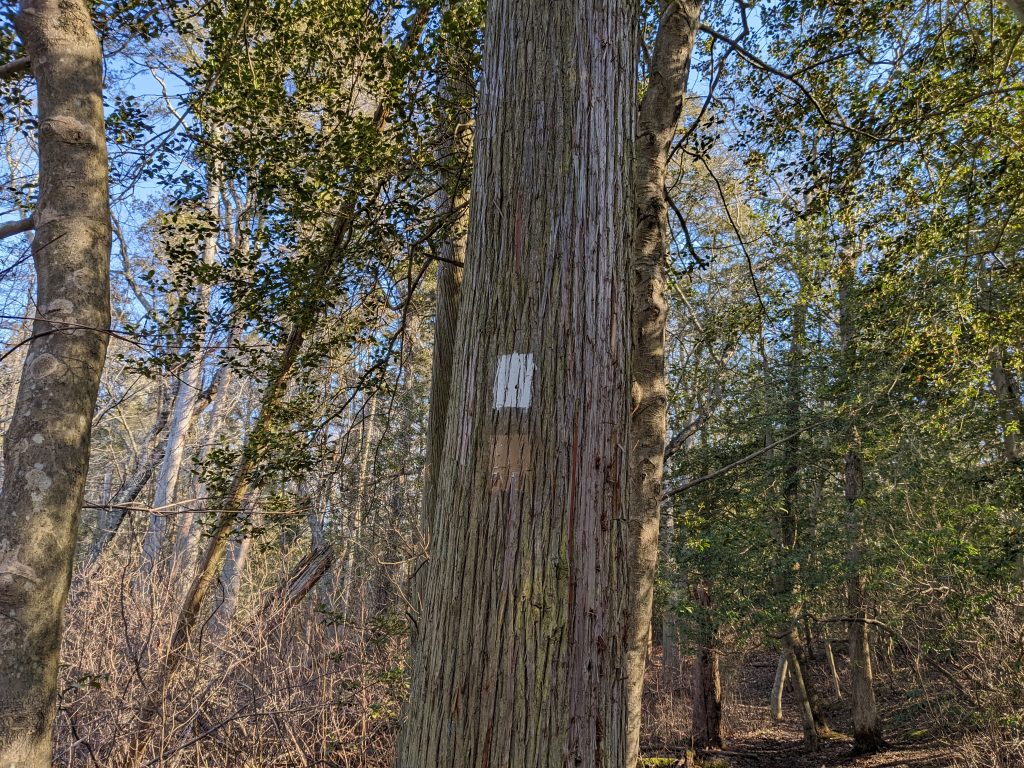 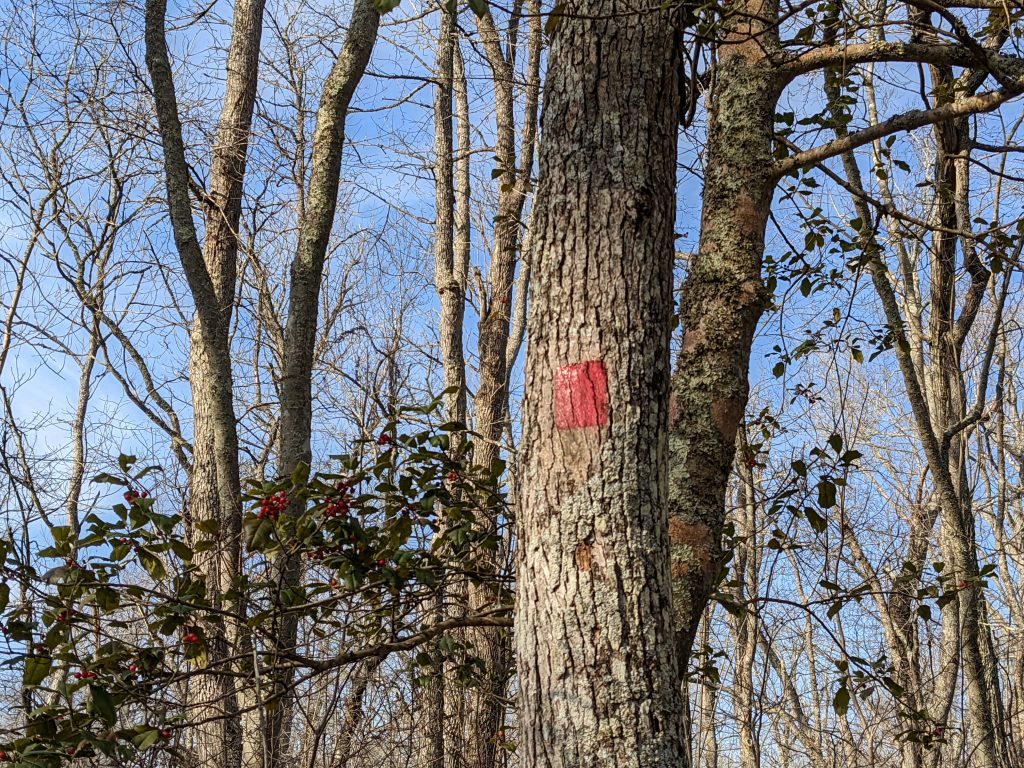 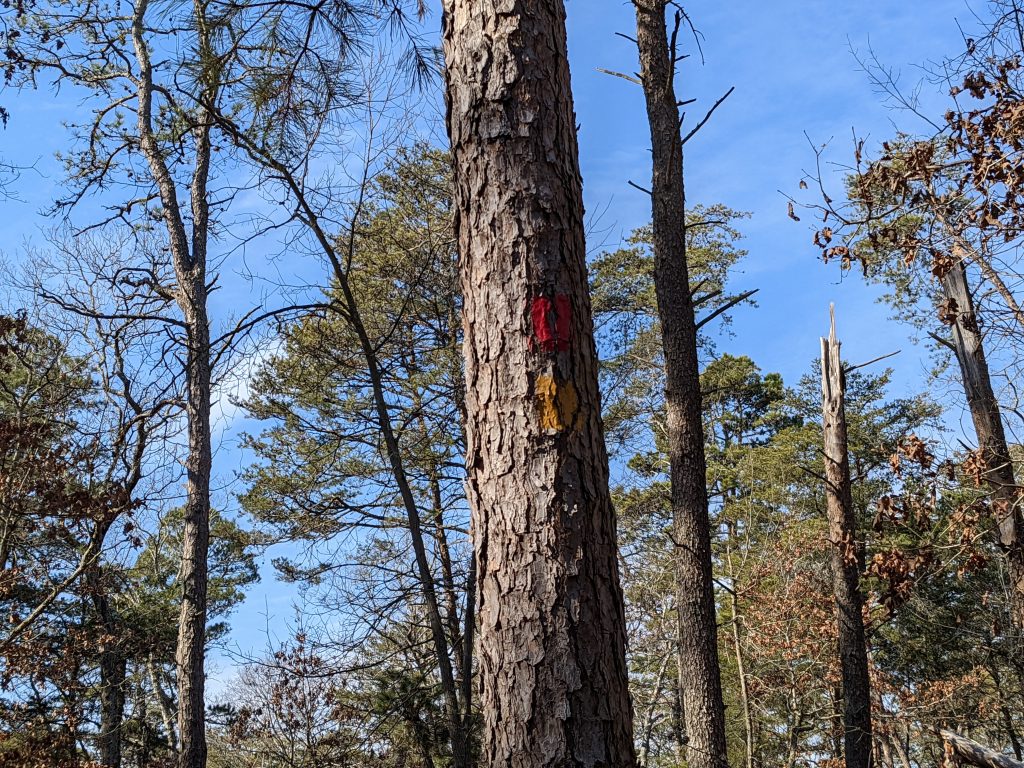 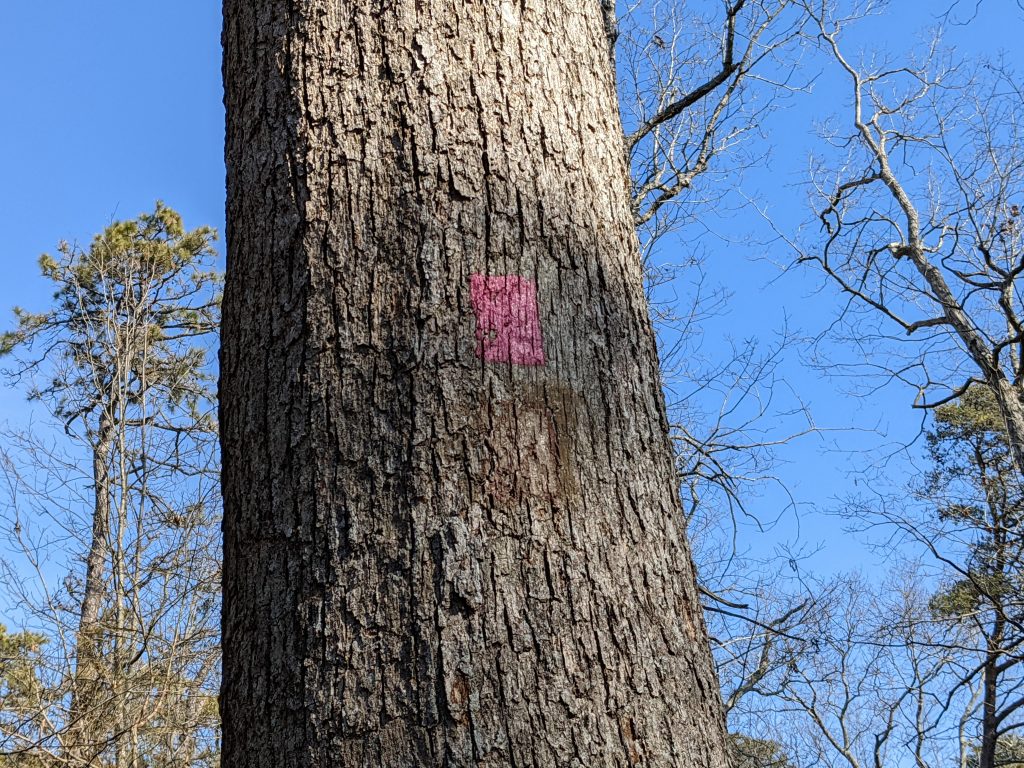