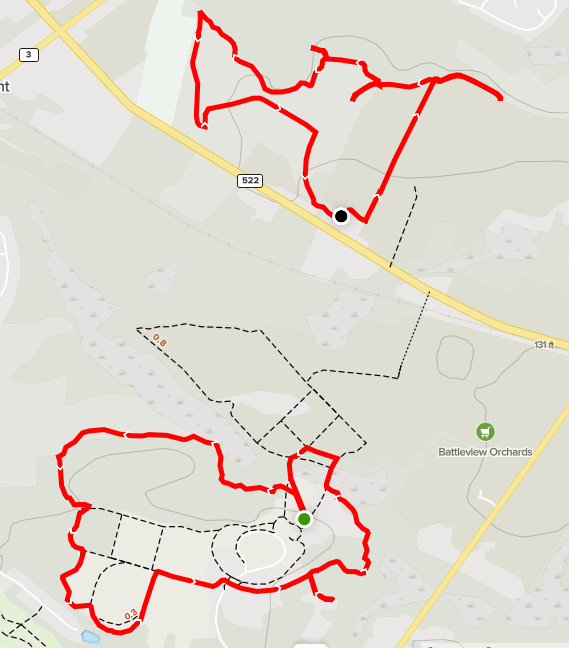 This was two hikes…I started at the Visitor’s Center (the eye of the rabbit in the picture above) and finished by hiking trails from the Perrin Hill trailhead.  When I left my house, it was 21 degrees out, it was 30 degrees upon leaving the visitor’s center.  The area received a dusting of snow the night before, but by the time I left after hiking the northern section, much of the snow had melted.  The good thing about the low temperature is that any moist or flooded sections were frozen solid.

A note on trails.  For the southern section, my plan was to do the Red Trail as a loop in a counter clockwise direction.  The printed map shows the trail circling the visitor’s center.  However, when I got to the rabbit’s belly (in my map above) the Red Trail stops.  I tried to follow what the map shows, and after road walking for a bit, I picked up blue blazes.  Blue isn’t shown on the map in this location.  When I finished, I drove to the Perrin Hill trailhead where my plan was to take the Farms trail all around the fields.  I never once saw a green marker or blaze.  I ended up taking a trail across the field and cutting off a large part of my hike.  I didn’t see (m)any markers in this section of the park.  Most of my track was by intuition, and think I did a good enough job.  At this point, I was really looking for historical markers, and less concerned with my initial plan as blazes were out the window.

What follow will be more a mind dump and less of a trail report.

I started just off the visitor’s center at the sign describing the Continental artillery positions. 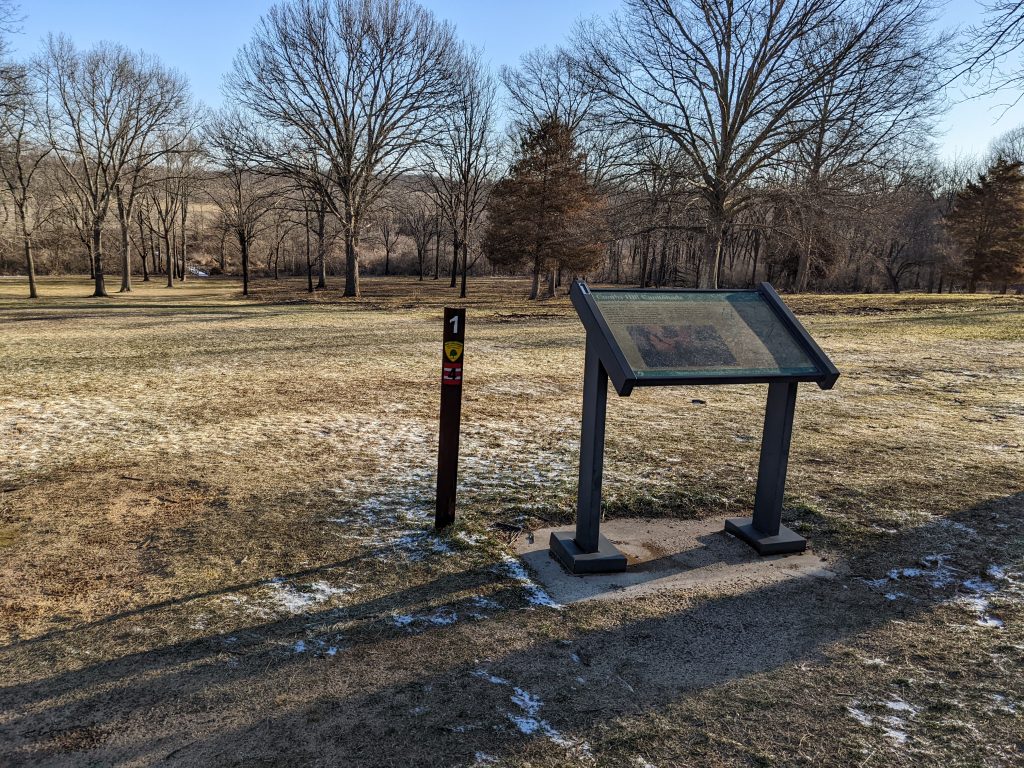 Trails were super wide, all dirt, with no rocks.  In the morning, there was a dusting of snow covering the trails.  Even though the temperatures were frigid, someone hasn’t told the daffodils to wait. 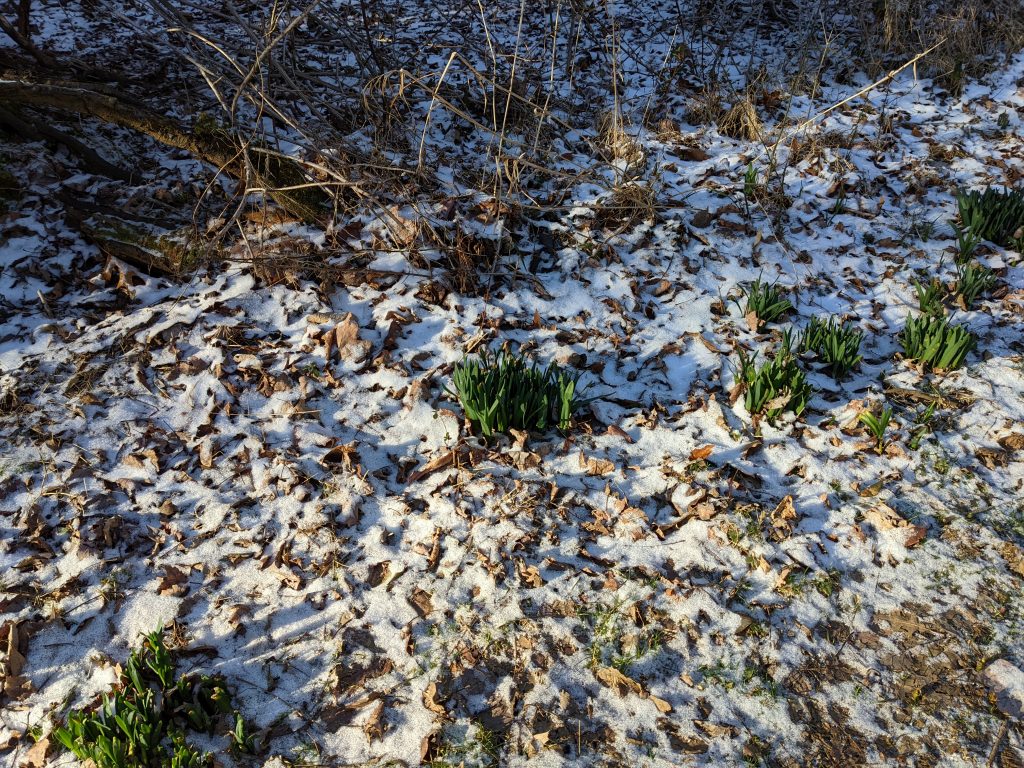 A good portion of the southern section is in the woods.  Towards the ends, around Combs Farm there are more fields. 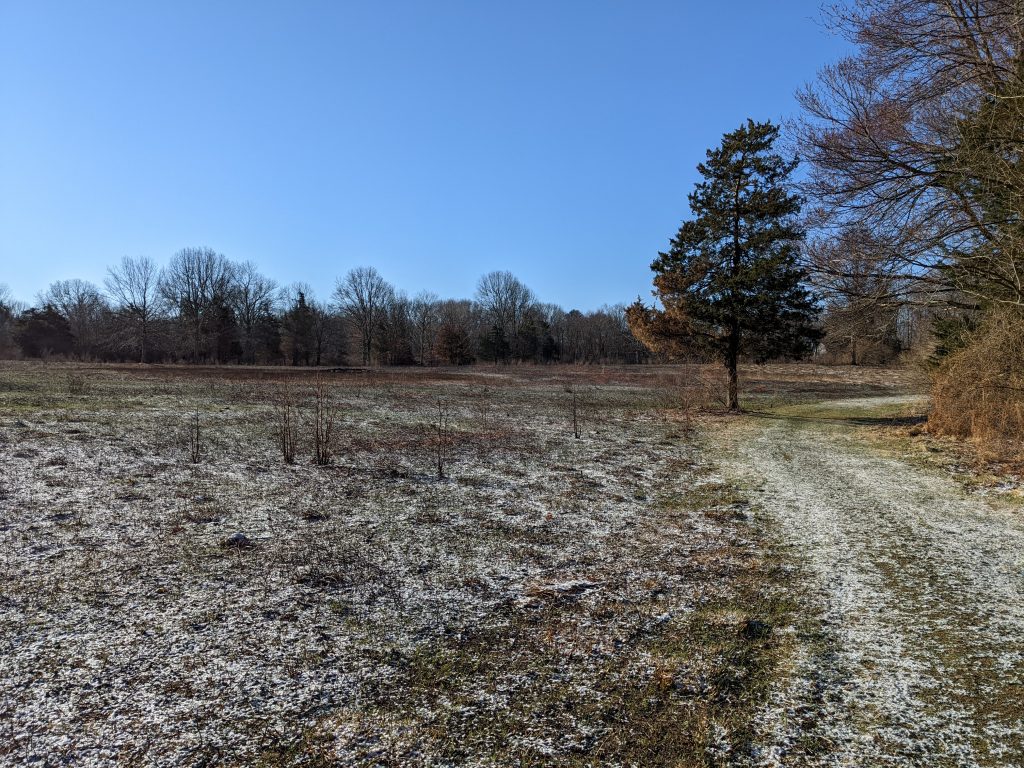 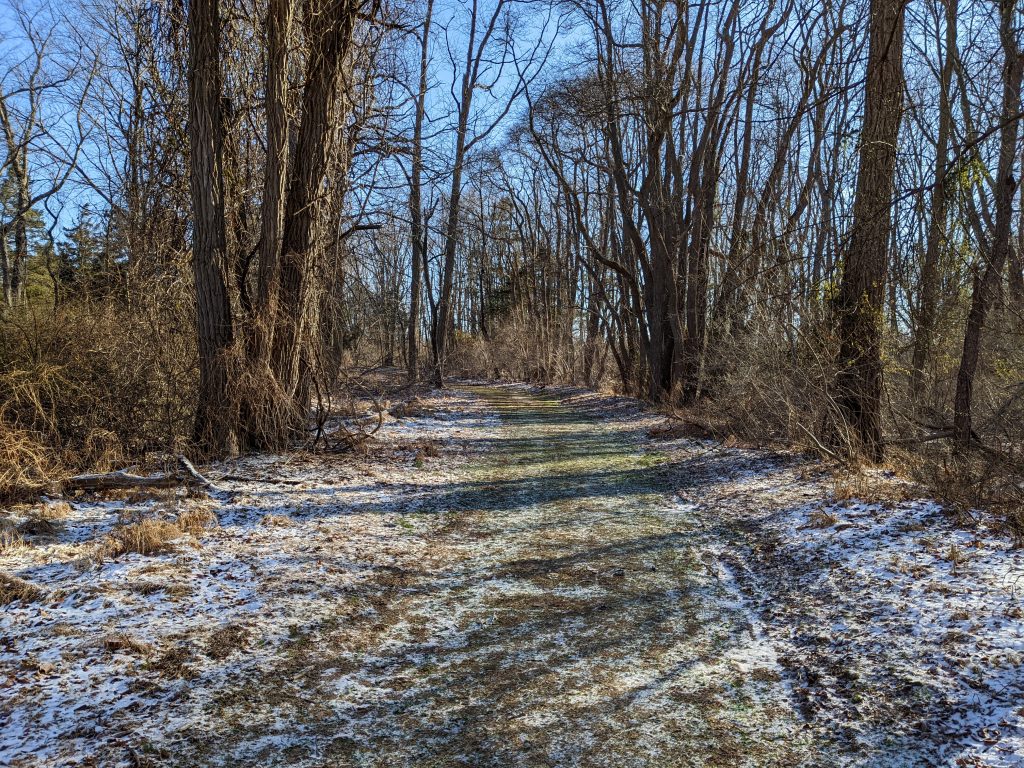 When the Red Trail “ends” follow the road straight.  You’ll be able to see where a trail picks up in front of you.  Don’t bother turning right to follow the road.  I did that, and it leads to a maintenance building.  Stay straight. 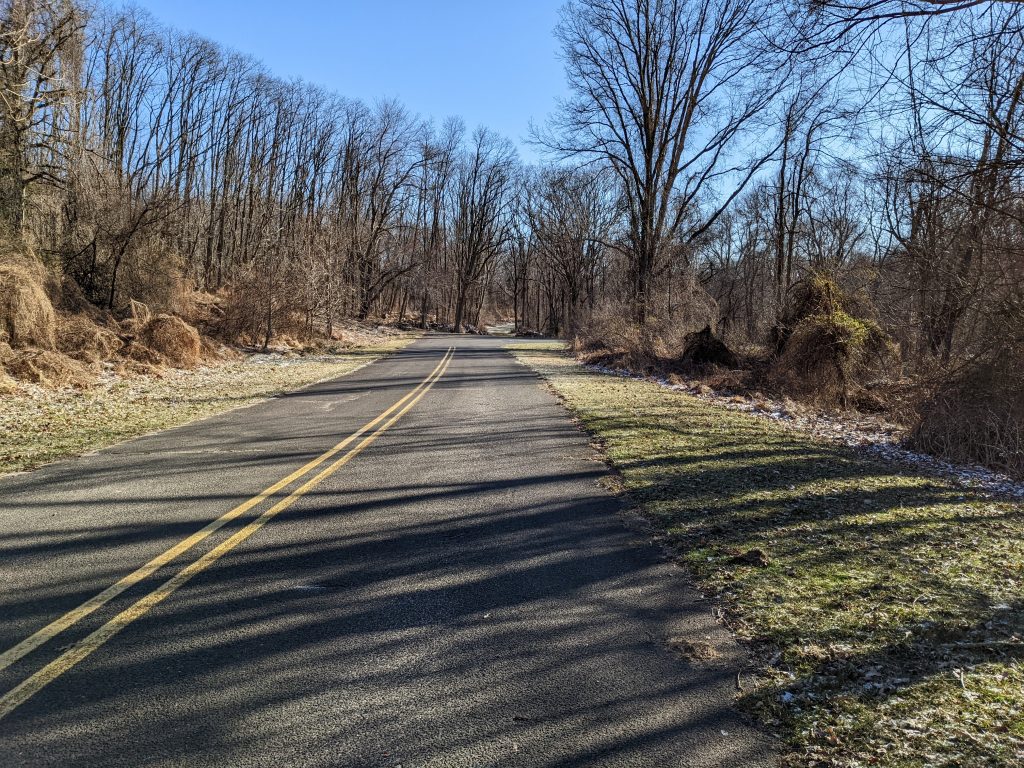 Too much snow covered the polypore to really see what it was. 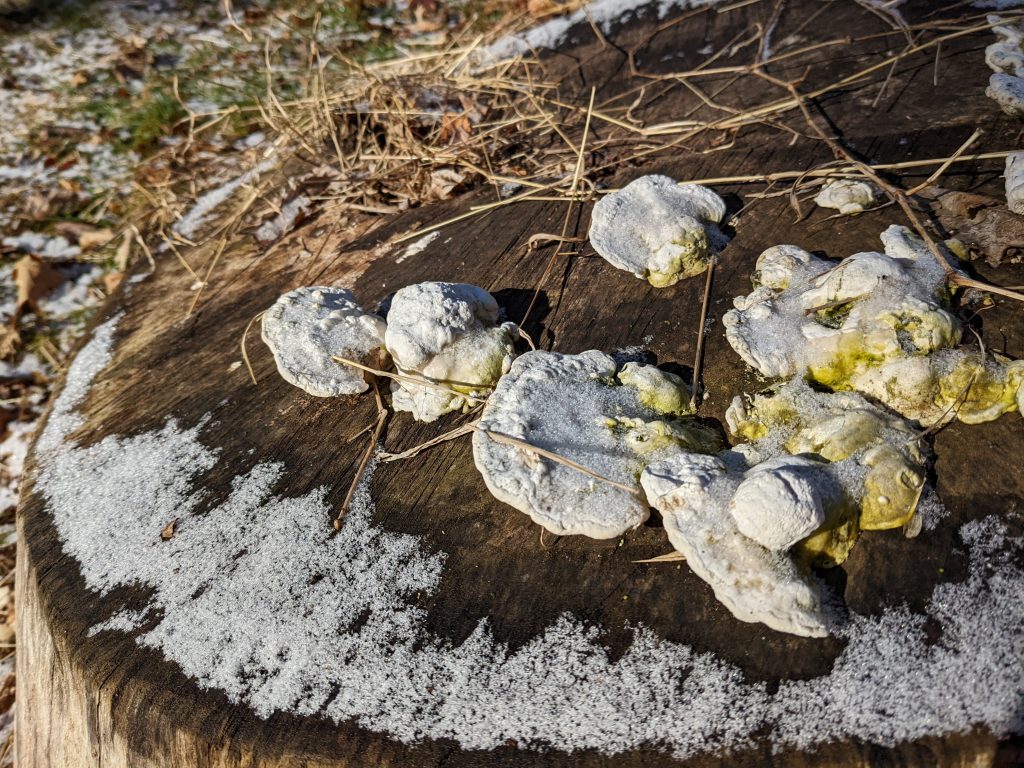 And there was a giant polypore way up a tree just off the trail.  I had to zoom in, because I couldn’t really reach it. 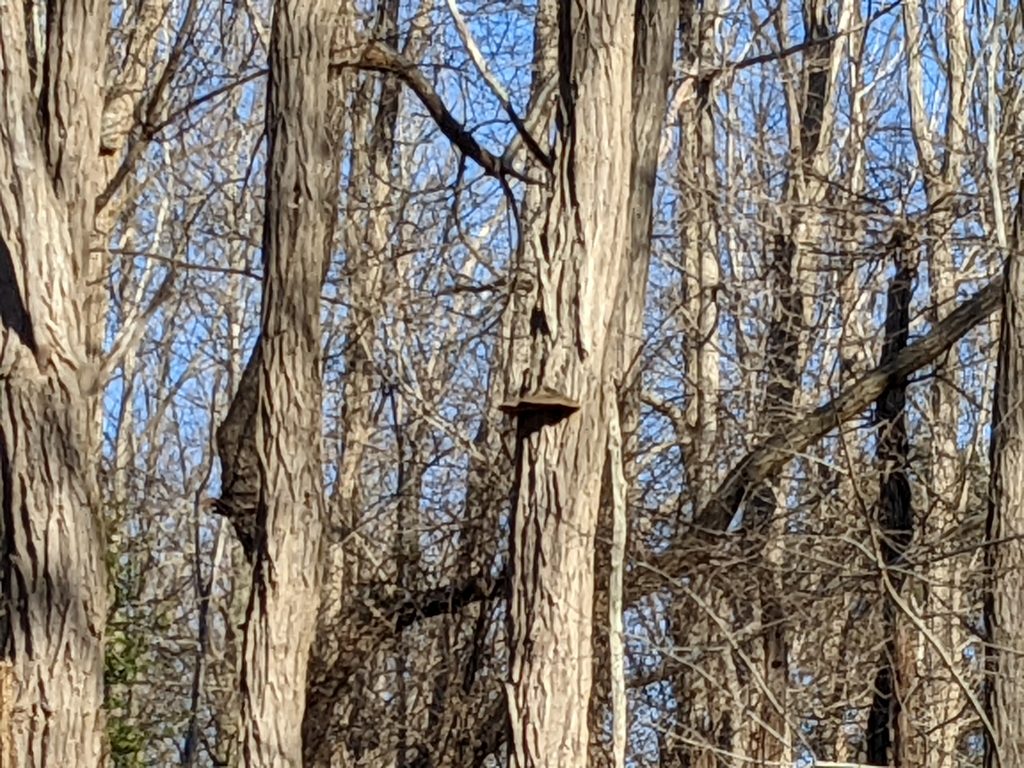 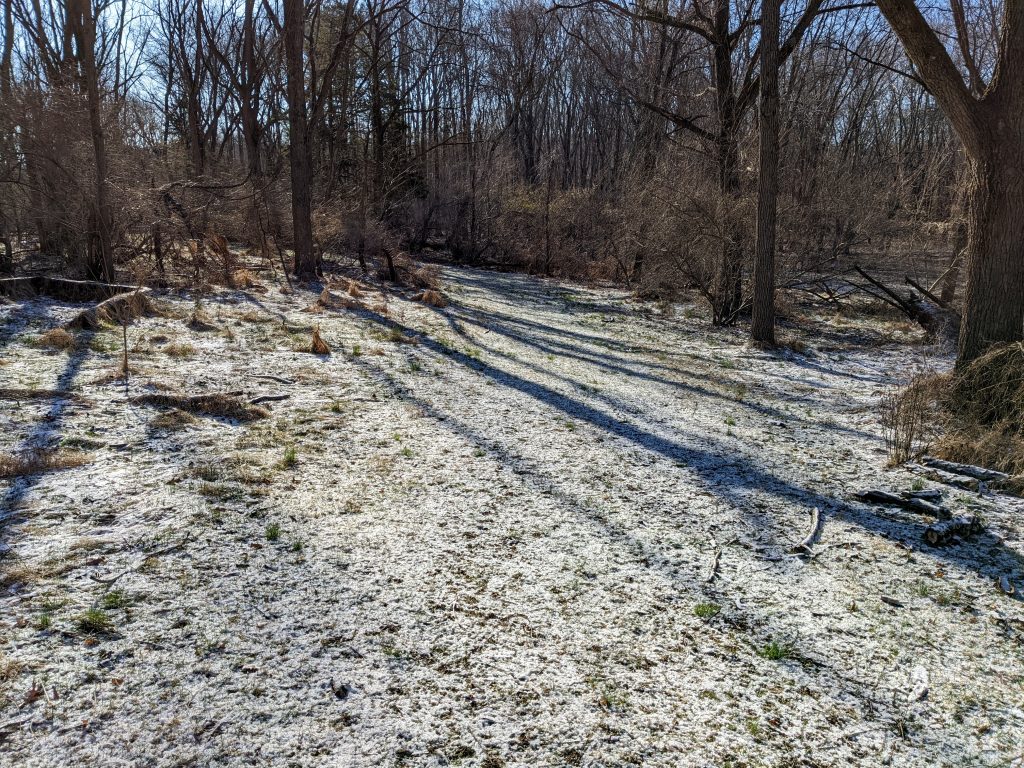 Unfortunately, the visitor’s center wasn’t open, even though the hours stated 9-3.  It looked like there were some interesting displays worthy of checking out. 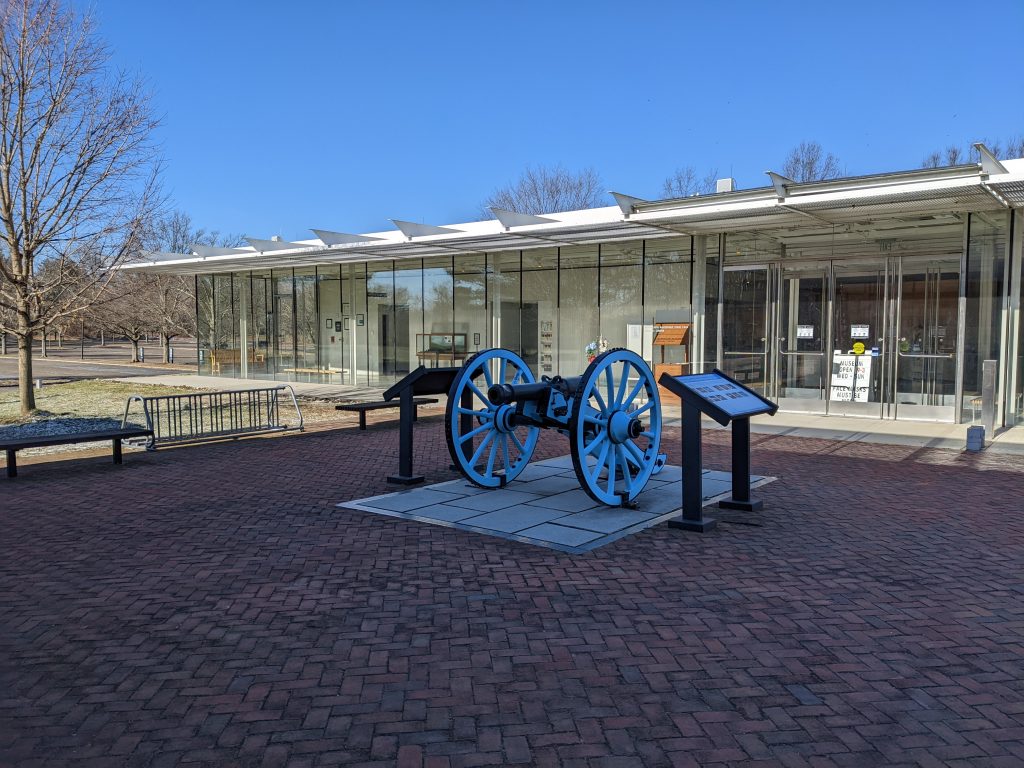 I drove up to the northern section, and parked at the Perrin Hill trailhead parking lot.  There were many more interpretive signs in this section, but with the wind blowing in the field, it was COLD. 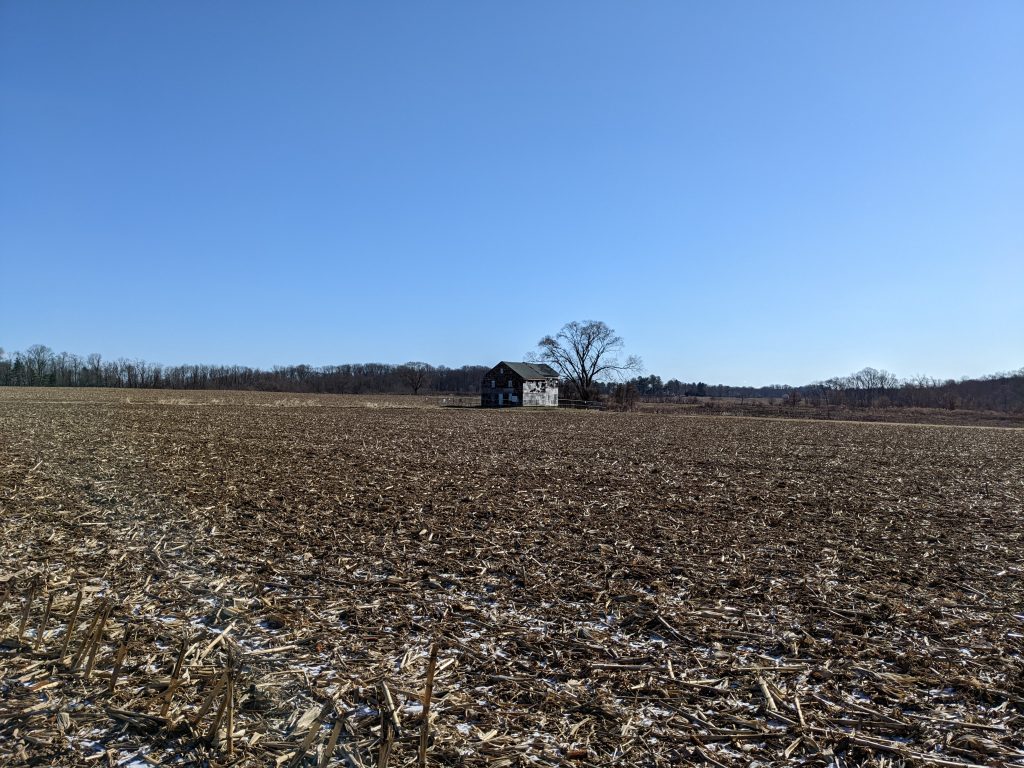 Since I missed the turn that would have taken me around the big loop, I tried to reach many of the interpretive signs.

The battle of Monmouth (or Monmouth Courthouse) was not a significant battle in the Revolutionary War.  There were not significant prisoners taken.  Strategically, it did not have much bearing on the war.  The British would still be able to retreat to Sandy Hook and sneak off to New York City.  Most historians consider the battle a draw.  However, the action gave the Continental Army a boost in morale and proved that they could force the British to retreat.  And, it would be the first battlefield that Washington would hold after the day’s action.

This section of the park is extremely exposed.  On June 27-28 in 1778, this area was boiling hot – most agree that more men died due to the heat than the actual fighting.  I don’t think I would hike hear in late June, or July, or August.  It would be brutal without shade.

It is here though that the legend/myth of Molly Pitcher is born.  Mary Hayes (Molly Pitcher) was a woman who (supposedly) helped man her husband’s gun (cannon) when he went down in the fighting.  The popular myth is that she helped fire the gun on the British Highlanders down the hill.  Likely, she was a camp follower who helped schlep water to the troops from the spring.  There are ample signs detailing her life all around this section.  This picture is taken from the spot where her husband’s cannon was stationed. 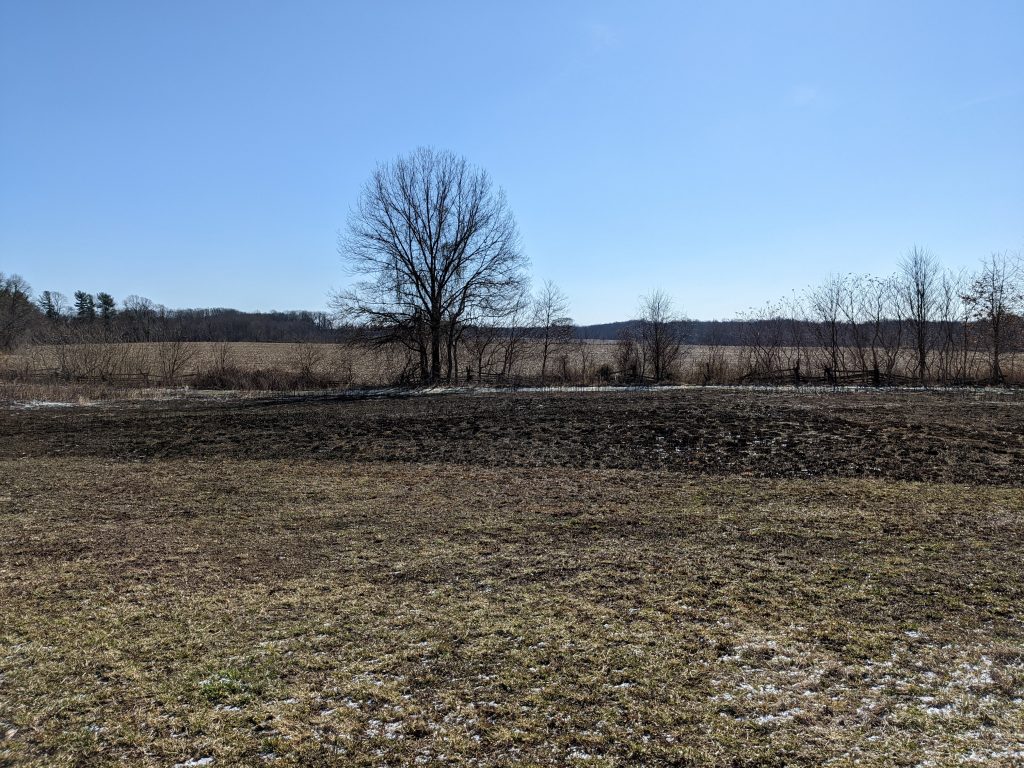 Beyond the tree and down the hill is where the British Highlanders were sitting.  And, the gun positions and directions were laid out by the Battlefield Restoration and Archaeological Volunteer Organization.  (I couldn’t find their site.)  Volunteers searched the fields back in the 90s to find the remnants of munitions.  Those findings, along with detailed journals and maps, allowed the archaeologists to identify exactly (as best as possible) where the guns were and in what direction they fired.

To my left, and in the woods, is the spring that Molly supposedly drew water from and brought to the heat stricken soldiers. 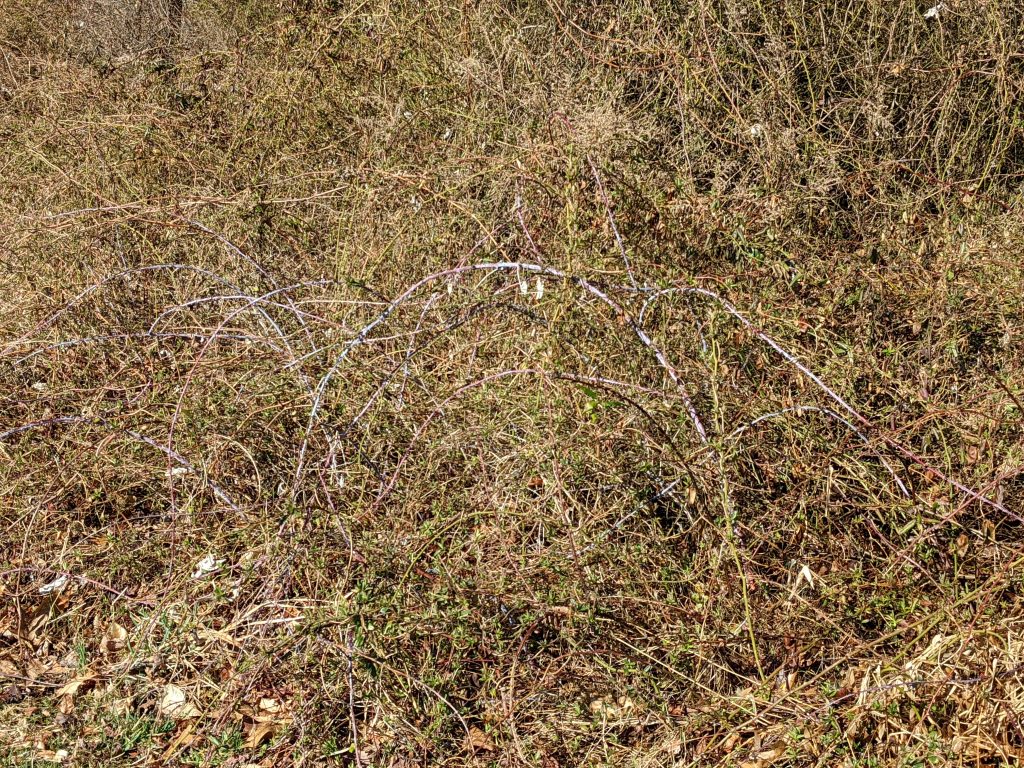 This final picture is of Tennant Church, and part of the graveyard associated with the church.  Tennant Church was a meeting place where the Continental Army marched by.  After the fighting, it was used as field station to aid wounded soldiers.  Supposedly, it’s very haunted.  It may be worth a trip here in October. 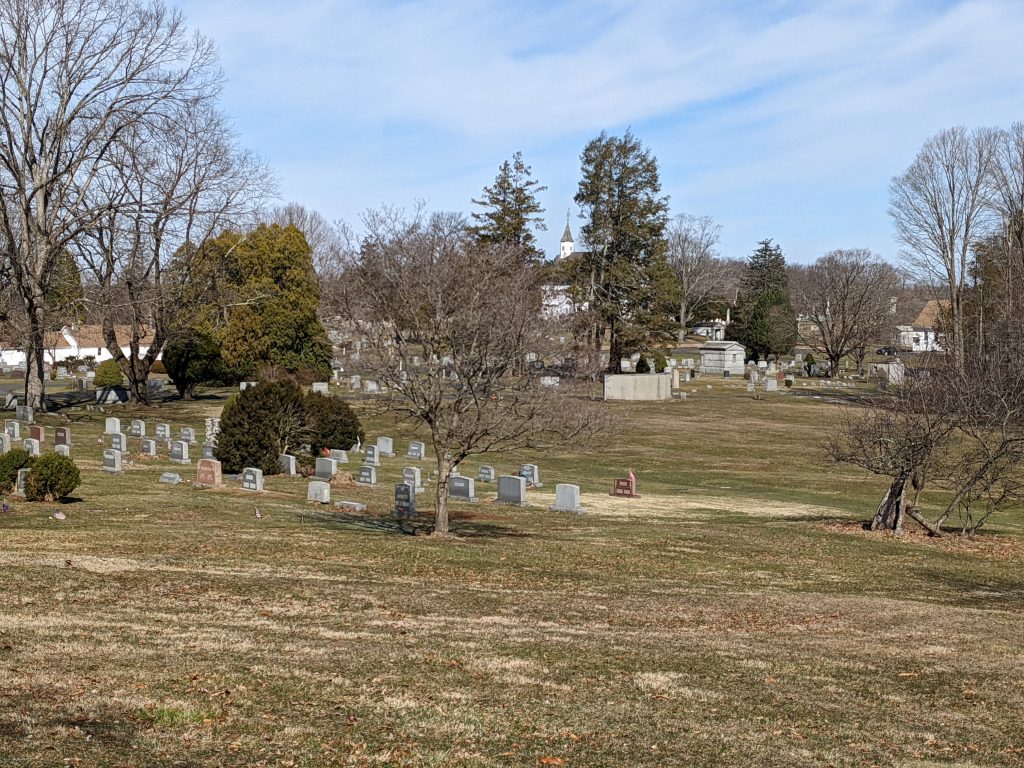 I really liked Monmouth Battlefield State Park.  I had not been here in a long long time – probably the last time I was here I watched some of the re-enactment that takes place.  I would definitely come to see that again.  Definitely plan a trip here to see the Revolutionary War history.  If you are hiking, plan on adapting to trails without blazes.

Polar Bears: 0  (but it could have happened) 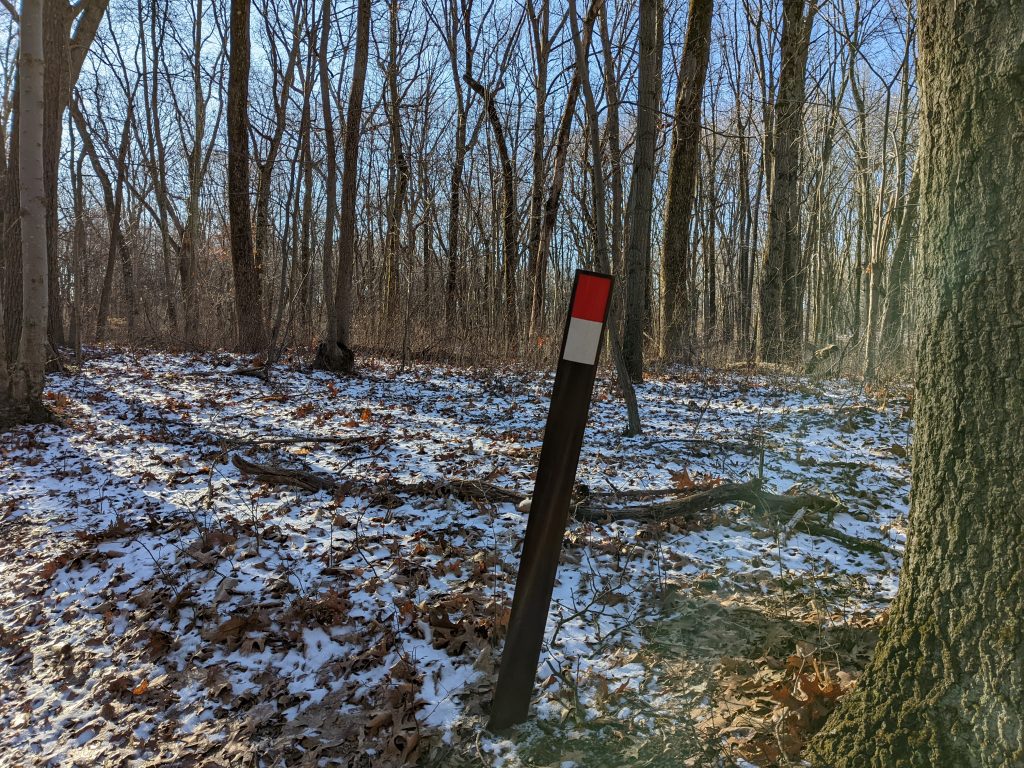 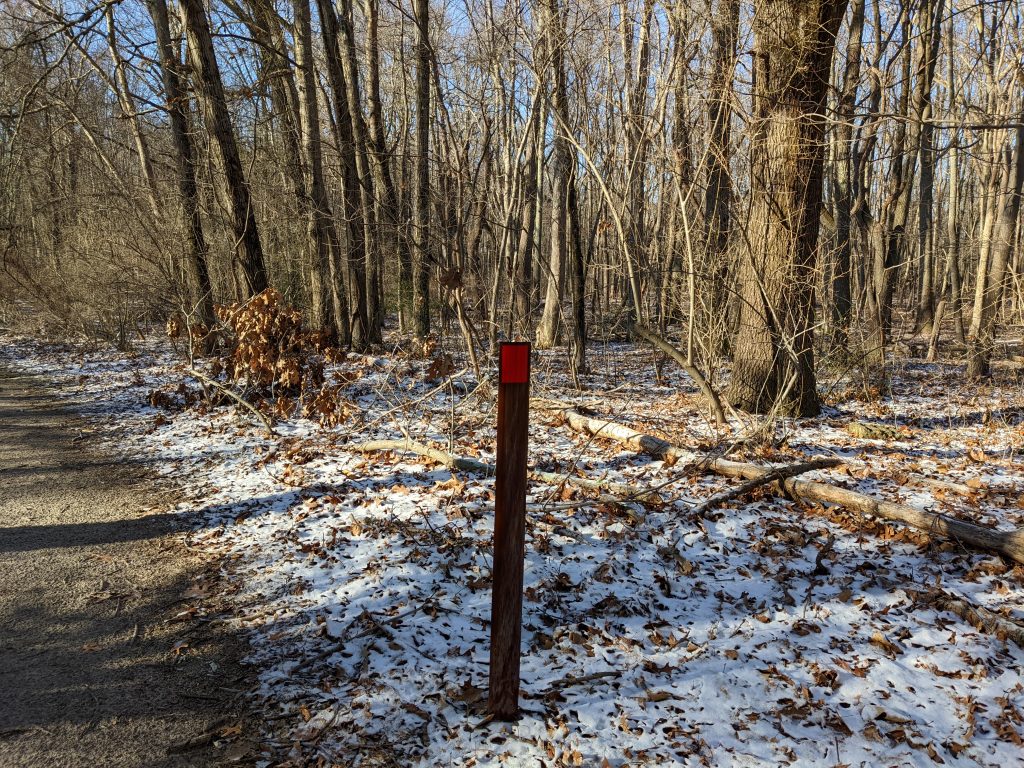 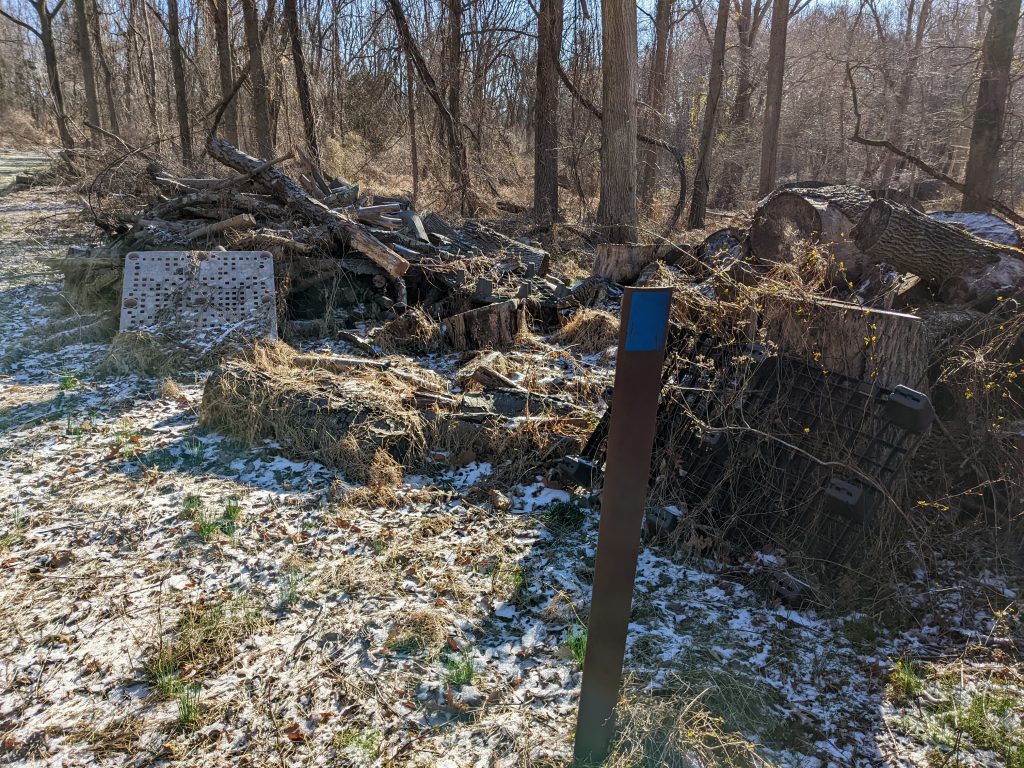 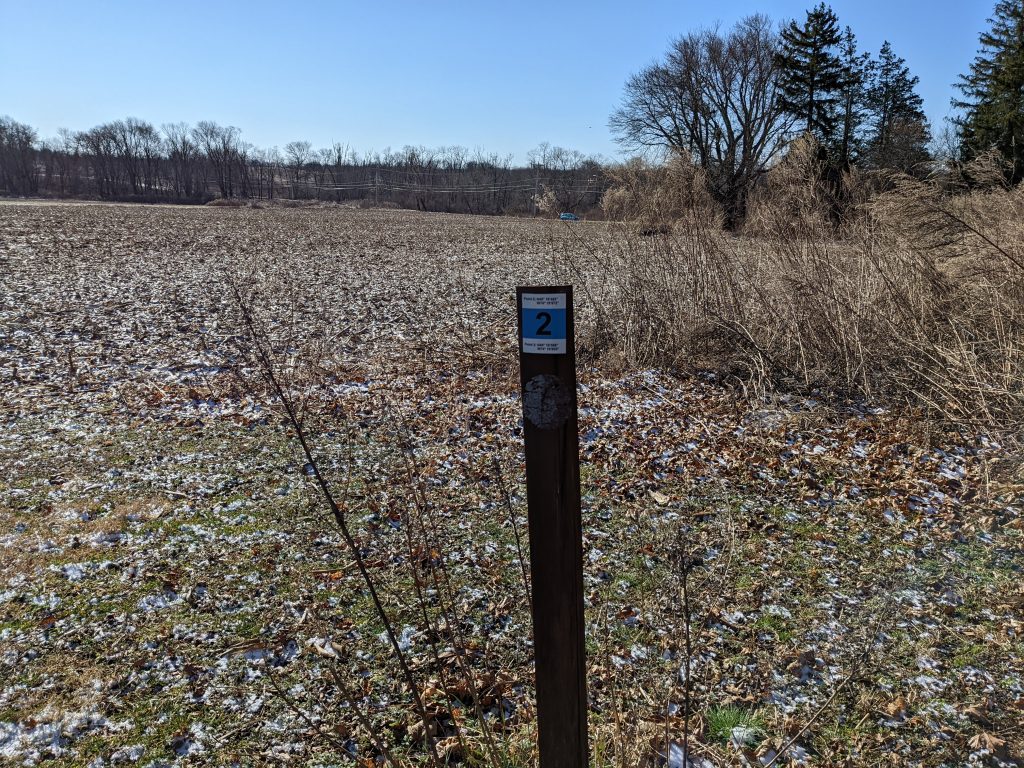