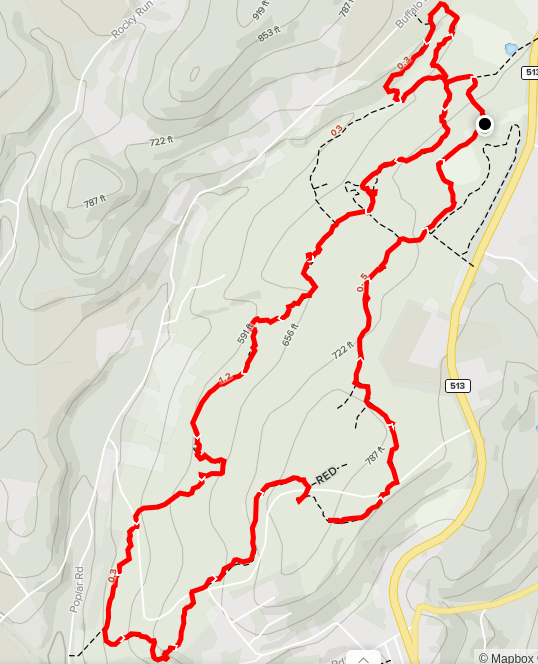 Note:  Part of the Solar System trail is missing from my map.  It had just finished pouring…my phone was wonky.

The lesson for today is to embrace being wet. I had signed up for another trip today but that trip got canceled.  The last time that happened to me the day was great.  Having not gone out the last two weekends, I created a Plan B last night and picked Voorhees State Park as my backup.

Voorhees State Park is another park that hosted and (at one time) had Civilian Conservation Corps (CCC) presence.  It’s evident at various points of the park, with signs and ruins visible.  I started out on Company Street, which contained two signs detailing the Corps’ presence. 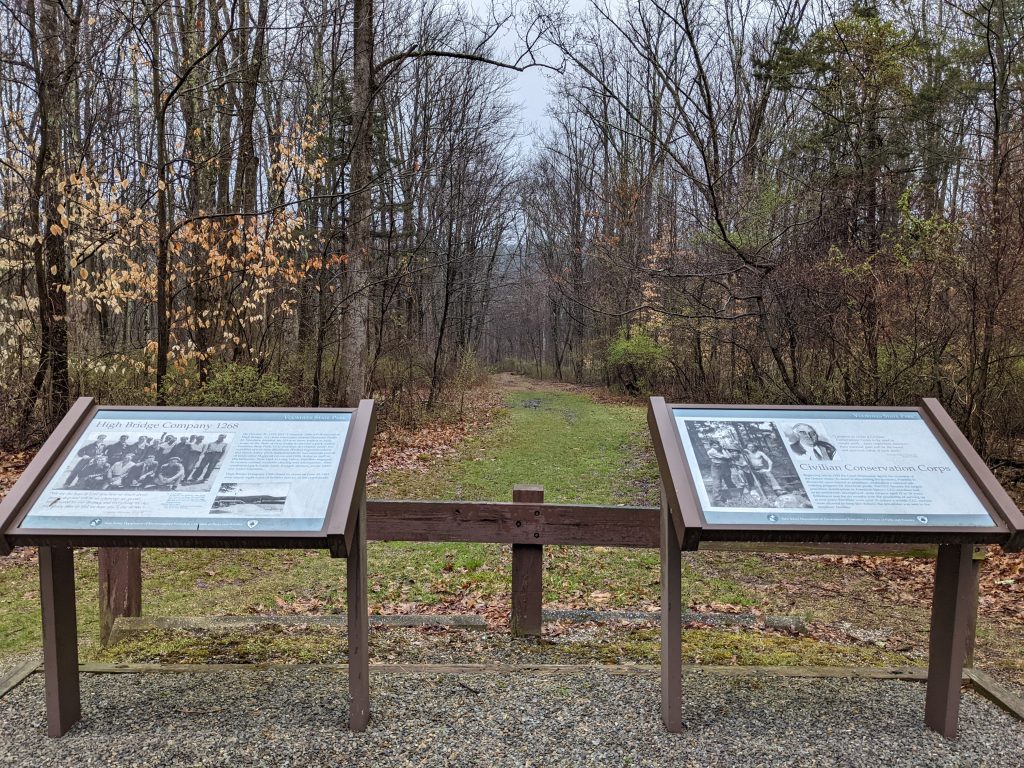 Going down the trail, on both sides, you will find evidence of the old buildings that were used by the CCC.

The weather was dreary and most everything was either gray or brown.  Anything with color immediately stood out.

I walked around the Brookside section before taking off on the Highlands Trail.  What is nice about the Brookside section is you can hear Willoughby Brook for almost the entire time.  You will cross it a couple of times.  One section, to the northeast was through fields.  Today, that section essentially was under water from all the rains we had over the last couple of days.  I felt my feet get wet once or twice, but once back on the dirt trail, they dried off pretty quickly.  It was the type of ground where when you boot landed, it sunk another inch or two.

Here’s a shot of the brook.  The water was really moving due to the recent rains. 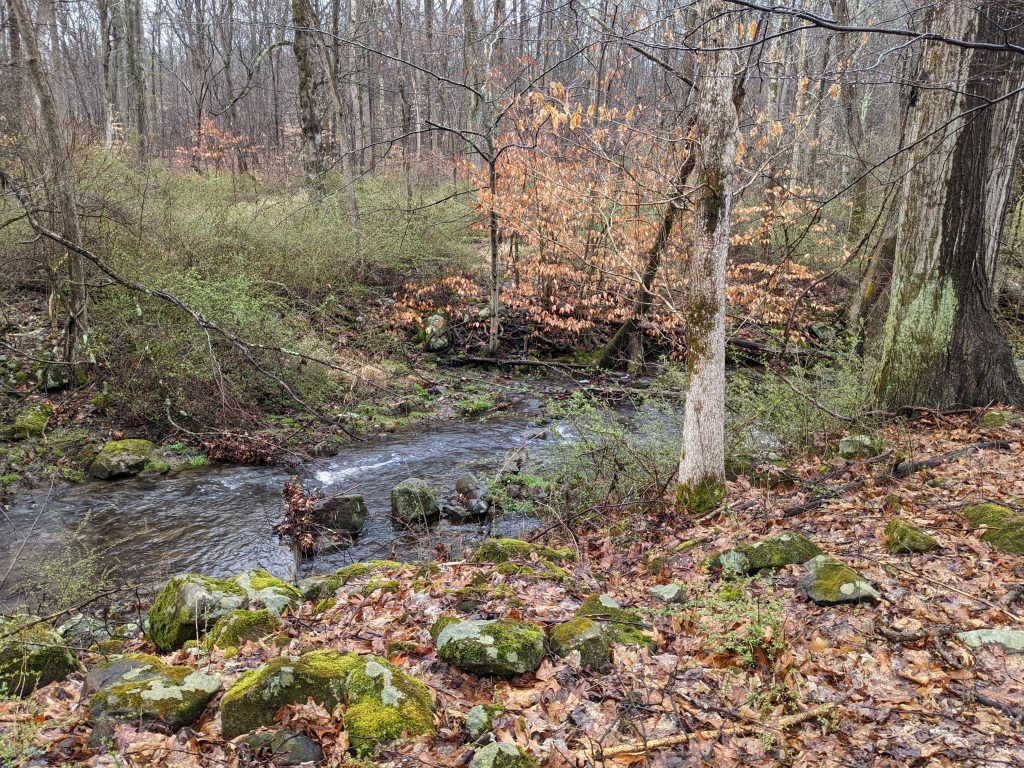 Going uphill at all became interesting as there were many sections where water just ran down the trail, creating its own stream.  For the most part, this wasn’t too bad.  There were a couple of sections that needed some bushwacking as the water on the trail was too deep. 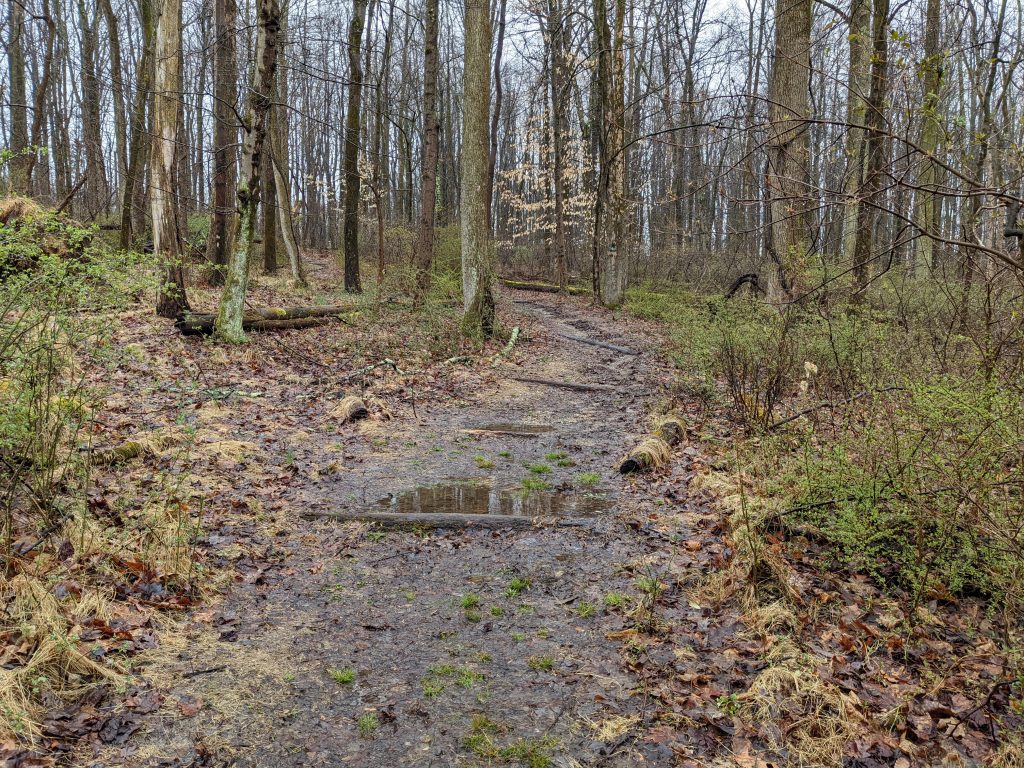 The hardwoods do not have their leaves yet so there is not much color.  However, there is plenty of American Beech to make up for it, and those trees mostly had their leaves. 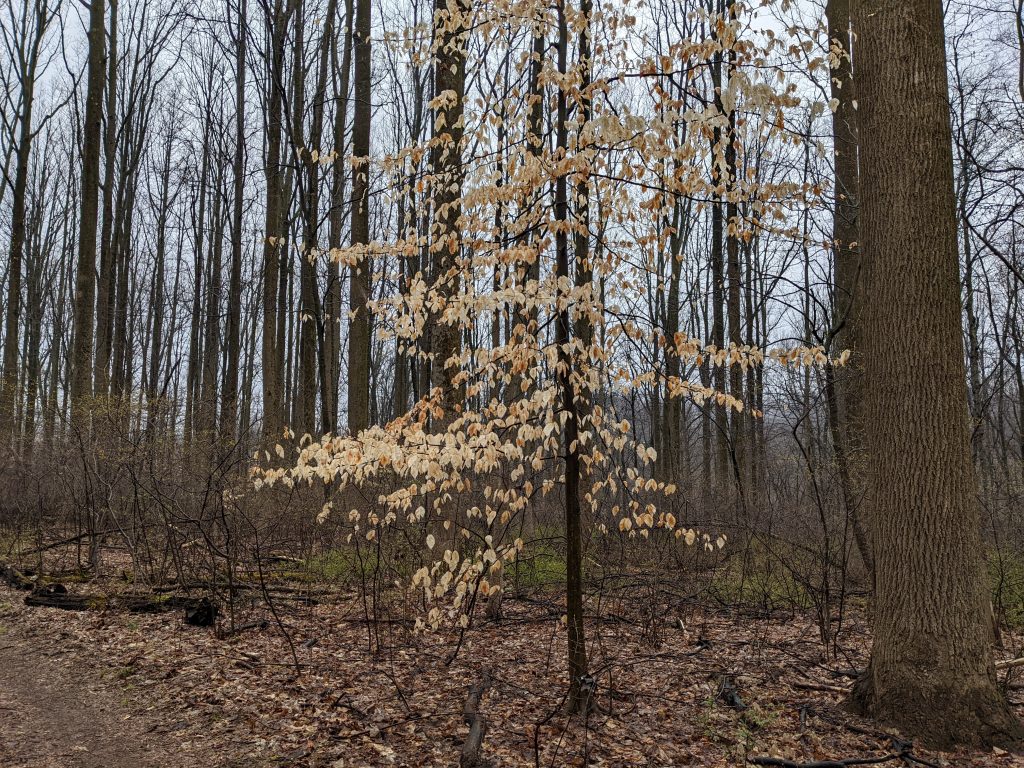 The Highlands Trail skirted many stone walls and contained a few stream crossings.  And all crossings were trickier due to the recent rains.  I suspect in the summer, some may even be dry.  There was one nice spot where the trail had streams, and cascades on both side of it.  At one point, the trail meanders through one of the stone walls. 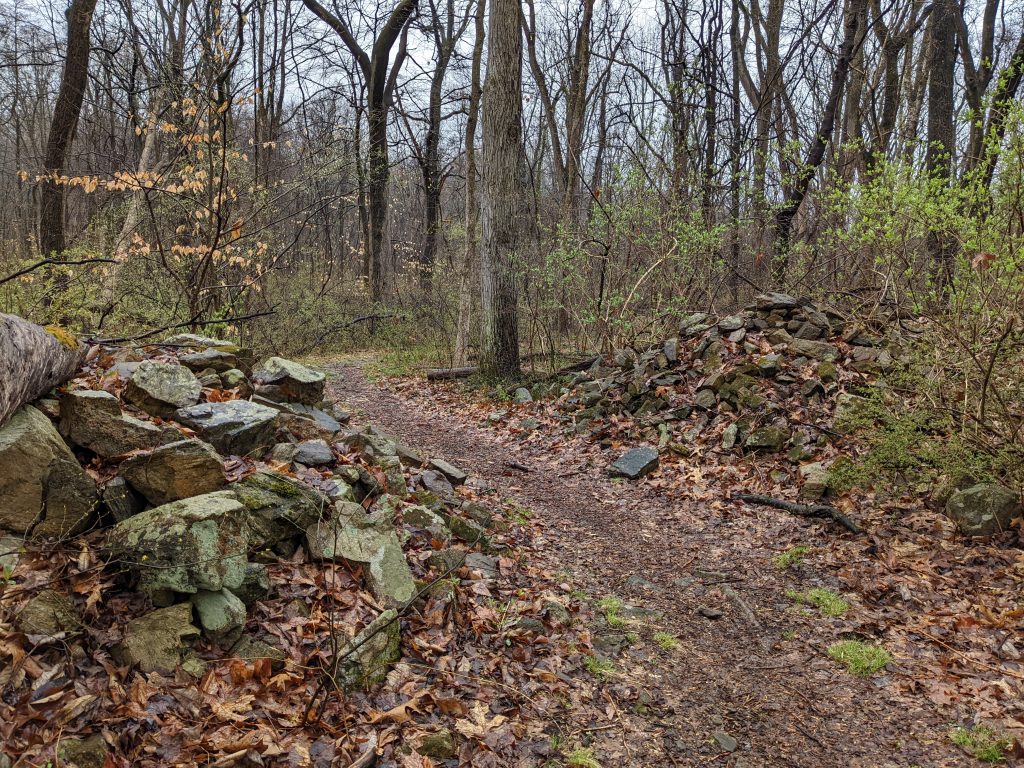 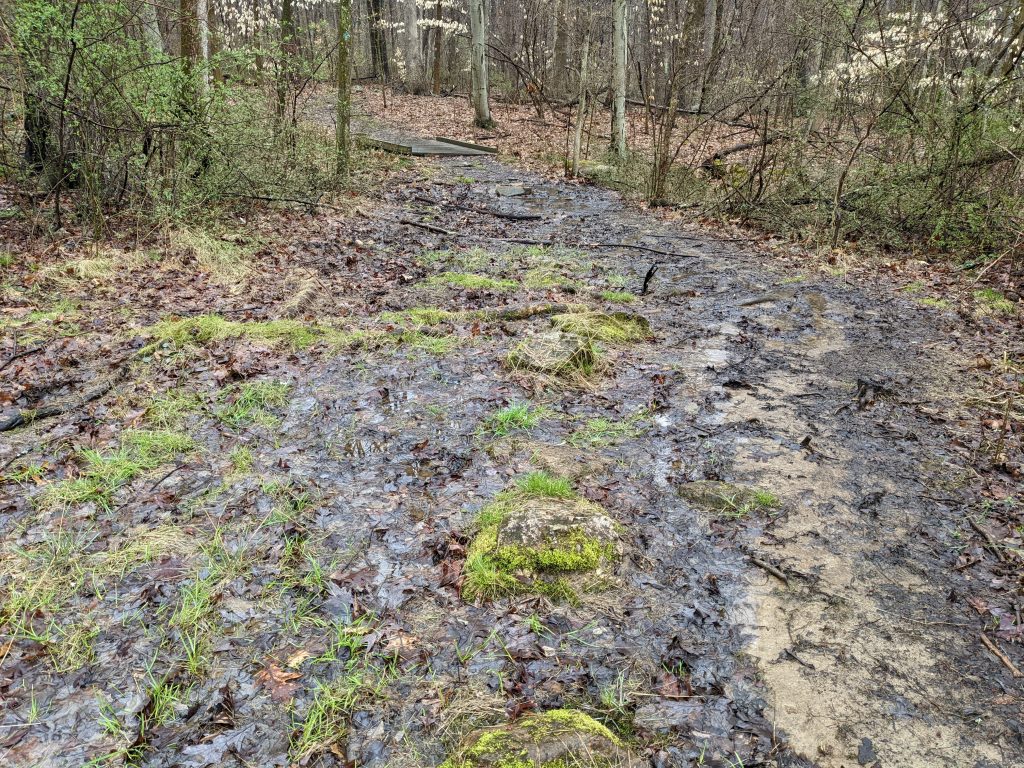 And yes, this crossing was trickier than it needed to be. 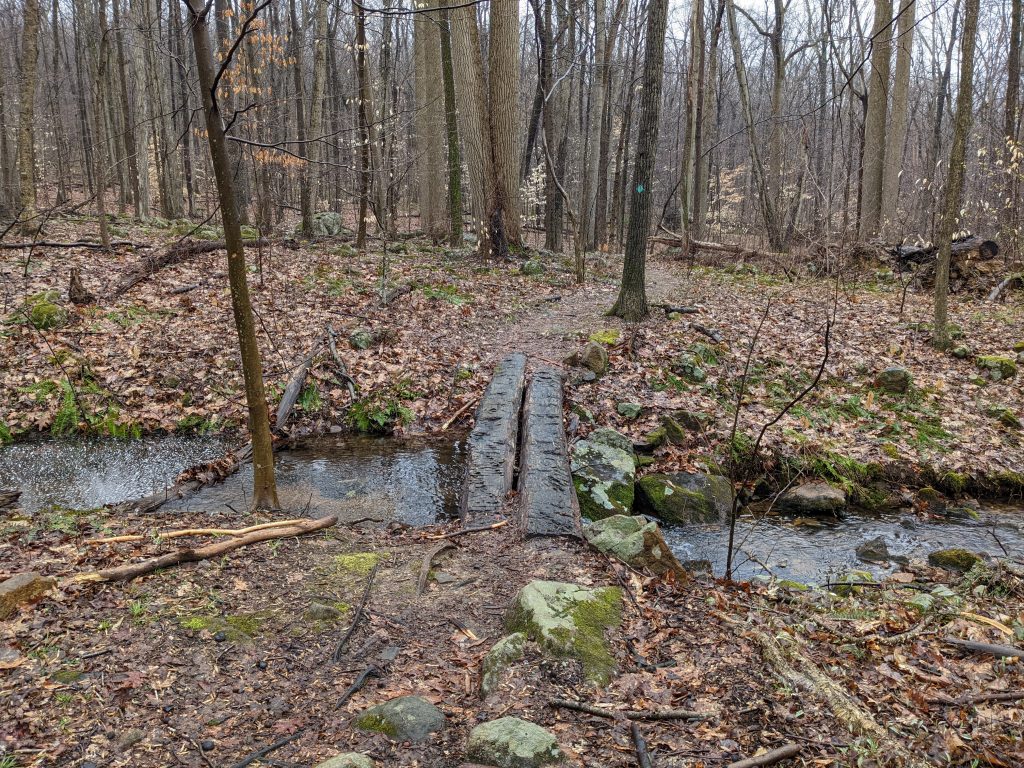 Of course, with rain, there’s lots of fungi. 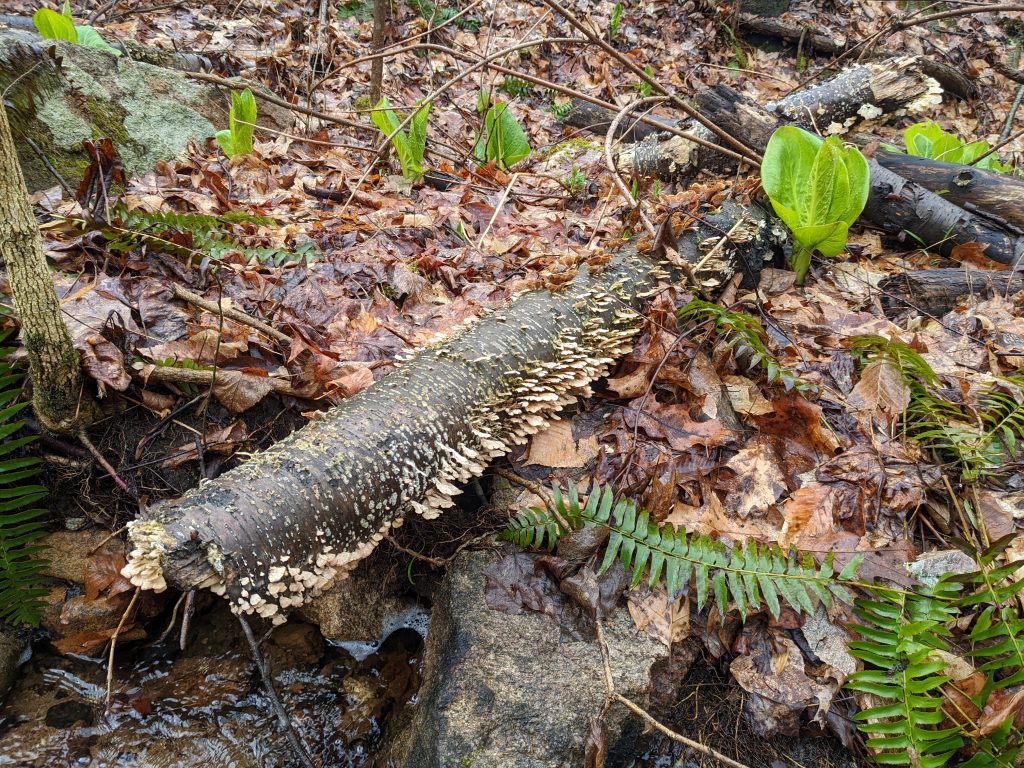 This would be the last relatively dry picture.  I had just cut through the power cut and was making my way to the  Vista Trail and entered a pine grove. 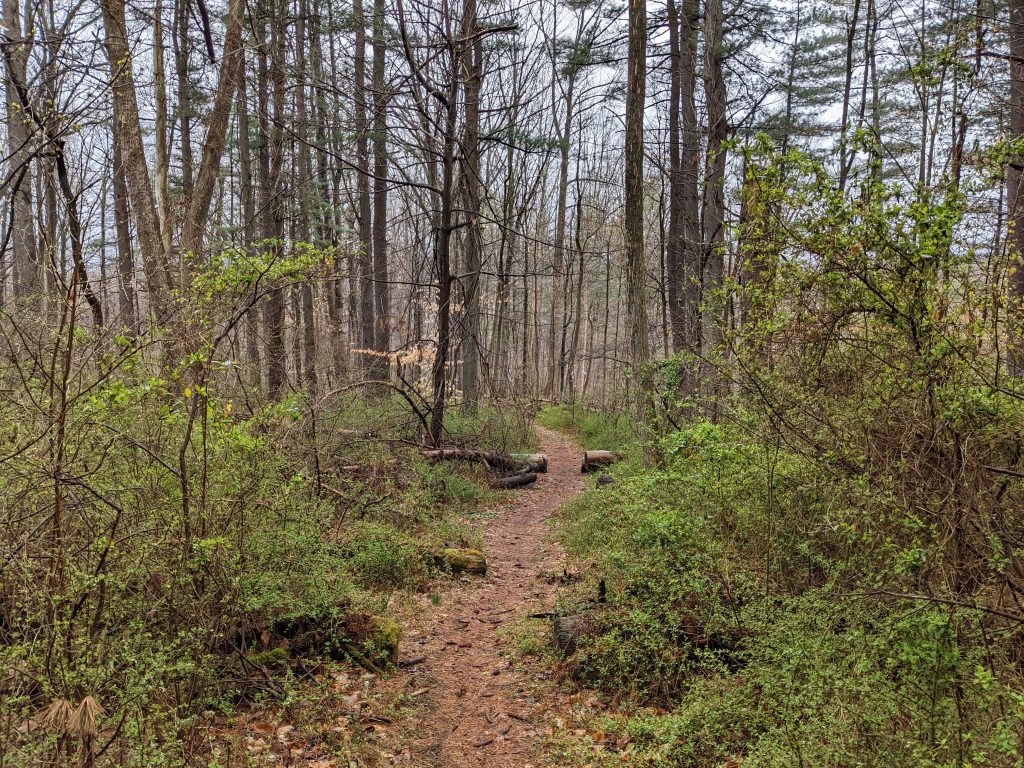 I saw one hiker coming against me on the Vista Trail, and she mentioned that rain was coming.  She was right.  I had felt a few drops, but it wasn’t anything to worry about – heck, I was traipsing through mud and little streams of water, what was a little rain?

Except, turning a corner I could hear it.  The skies opened up and a downpour started.  I had no time to get my jacket or pack cover out, I was soaked in an instant.  It might not have been too bad if the trees had their full canopies, alas, that was not the case.  From this point, I booked it up the Vista Trail, and the hill, towards the observatory.  Getting to the top of the hill, I found George’s Thrones, but it was raining too hard to sit for a minute.  On any other day, these seats would  have made an awesome rest stop after climbing the hill. 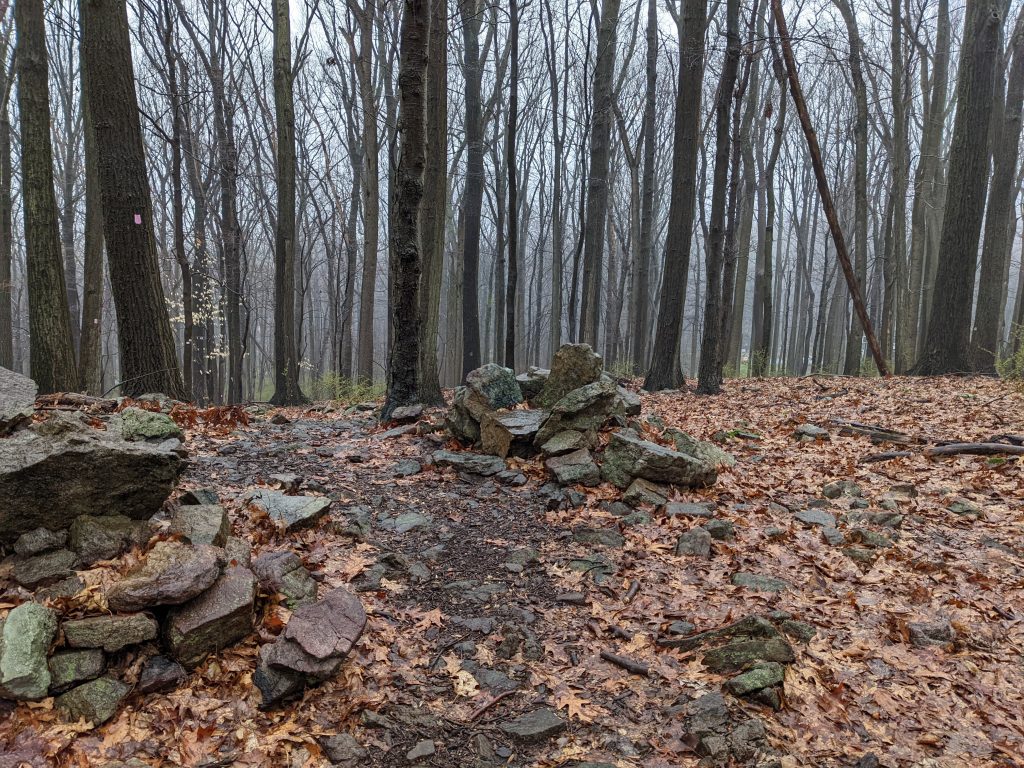 At the observatory I waited out the downpour from a porch.  The temperature dropped so I finally got my jacket out, and while I was at it, I got my pack cover out and put that on.  I think the moral of the story is to pack both in easier to reach areas when rain has a high potential. 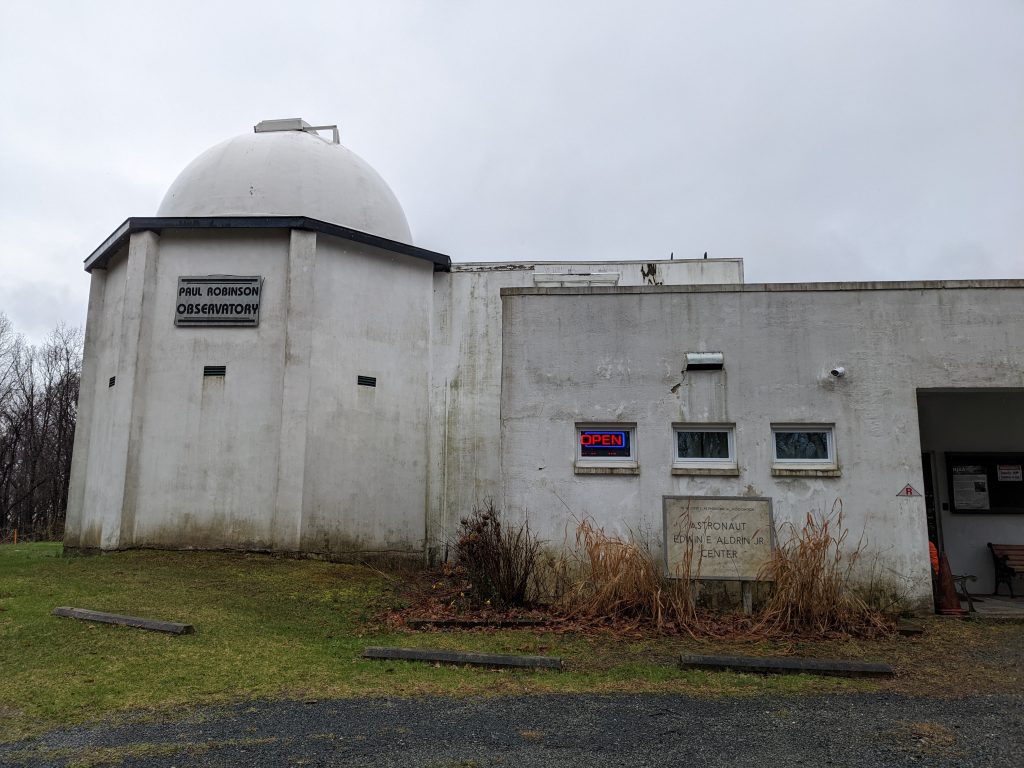 At some point I would like to come back and use the telescopes  It looked really neat.  And despite that Open sign….it was closed.  They probably wouldn’t have let me in anyway.

After the rain slowed to a sprinkle, I took a quick walk down the Solar System trail which has markers for the planets, marked out to scale.  At the end of the trail is a viewpoint that (should) overlook Round Valley; however I was in a cloud, and it was still raining.  It might be good at this time of year if it’s not raining because the trees do not have leaves. 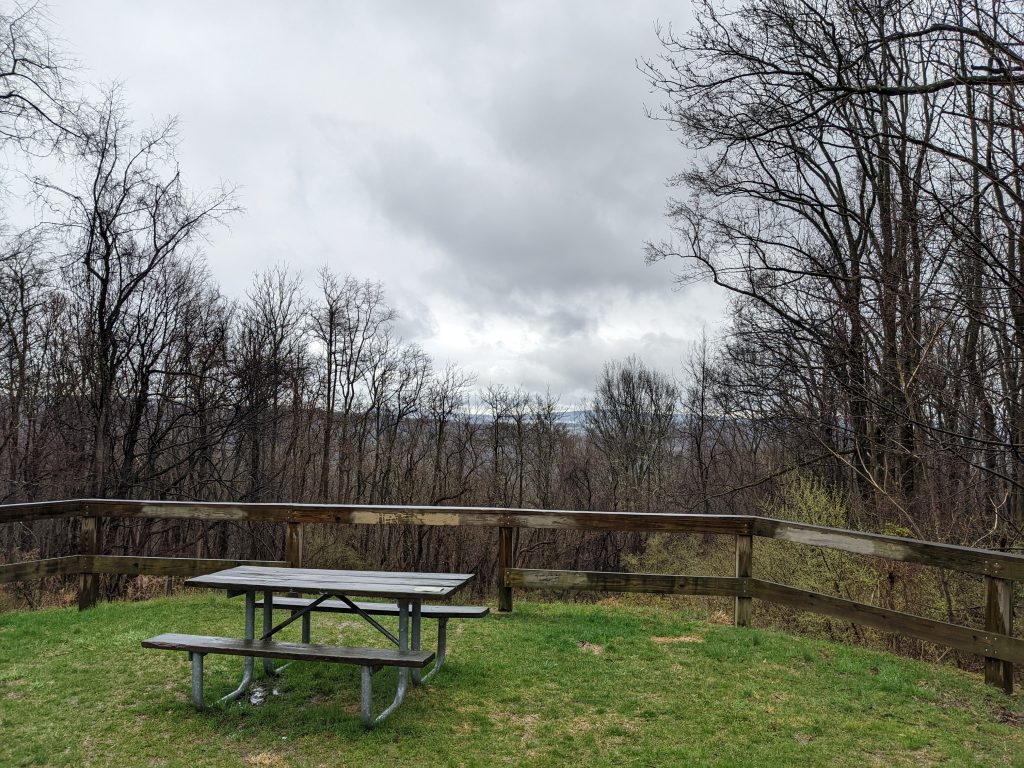 After a short walk across the parking lot, I took the Hill Acres trail back to my car.  This trail is essentially a woods road, that leads to group campsites.  The road was a little tricky today, with a couple of sections fully flooded out. 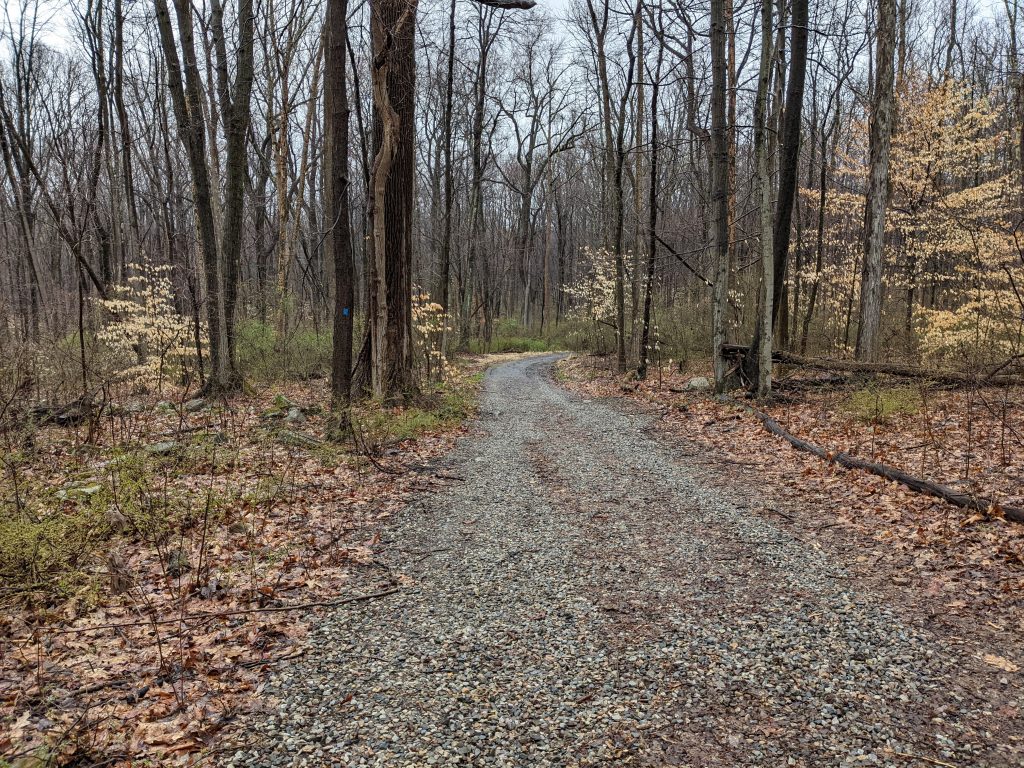 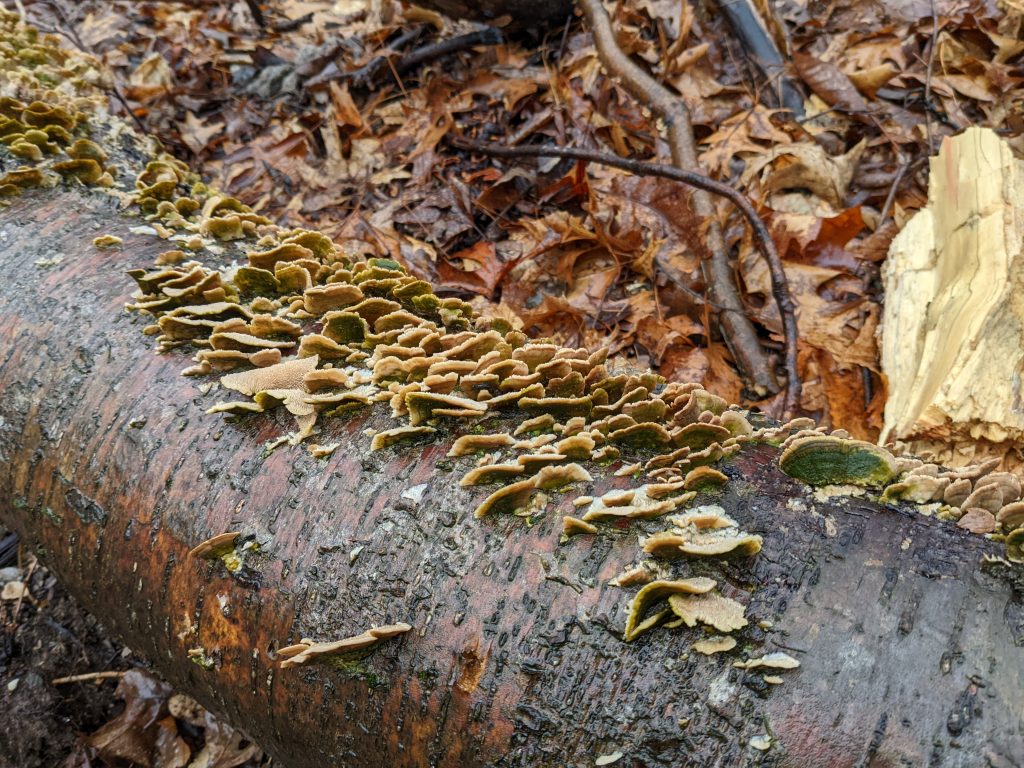 I really liked the park, especially when it wasn’t raining.  My only suggestion would be to cut runoffs into the downhill sections of some of the trails so the water has some place to go other than down the trail.  There is something for everyone here and well worth another visit. 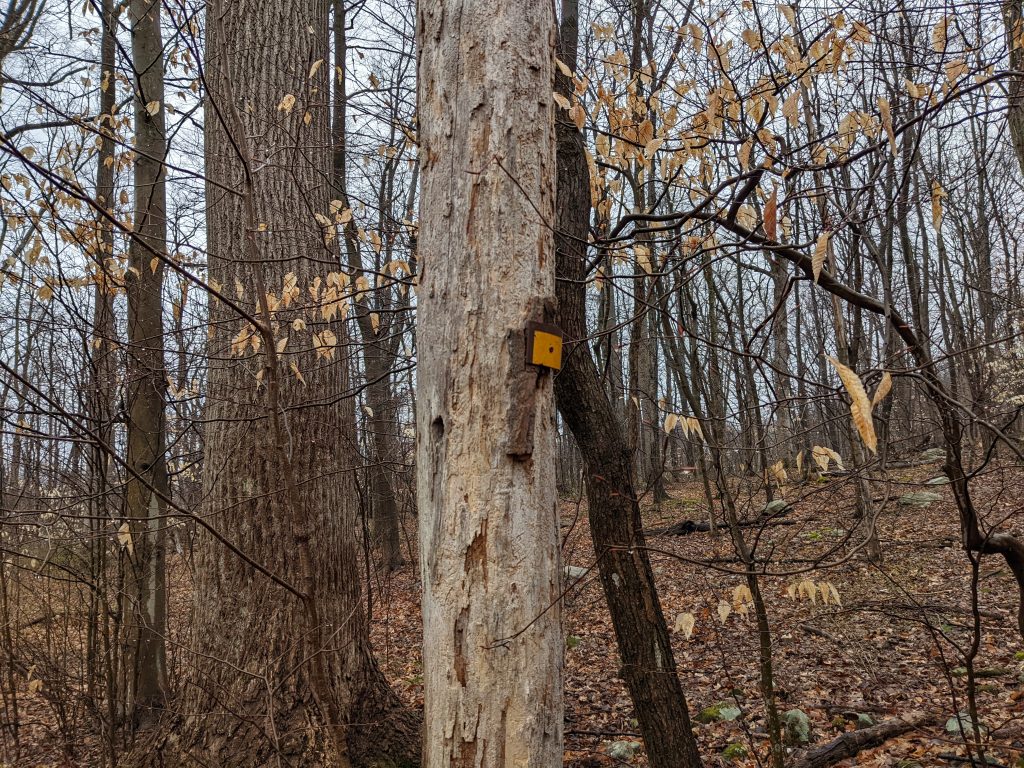 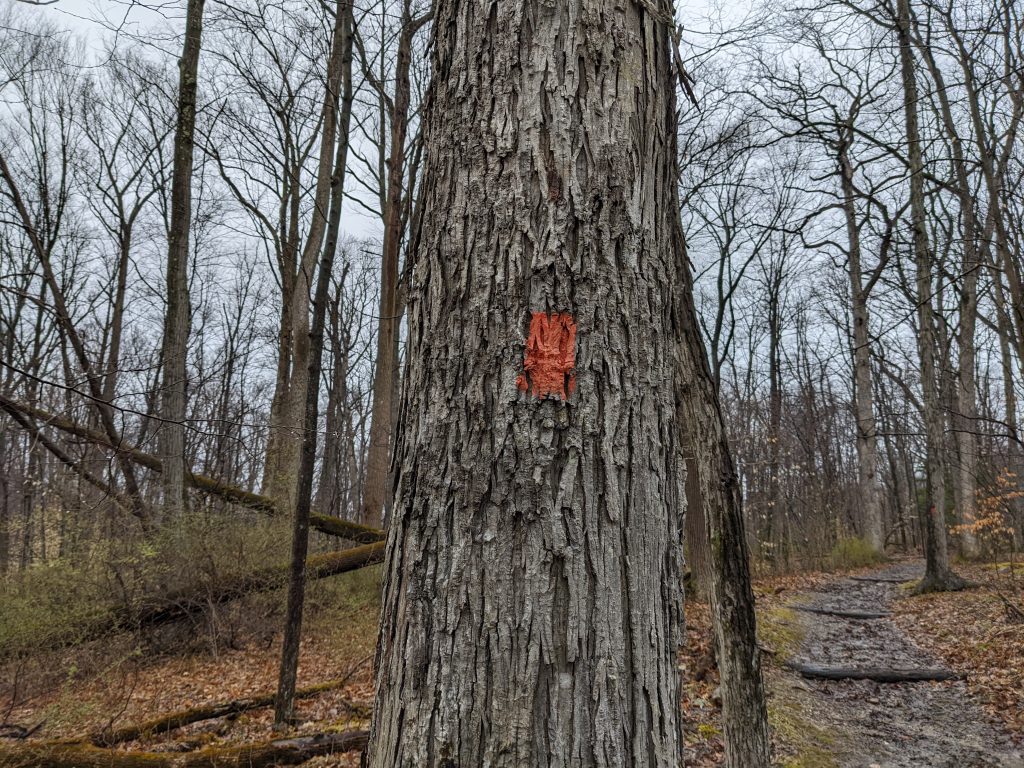 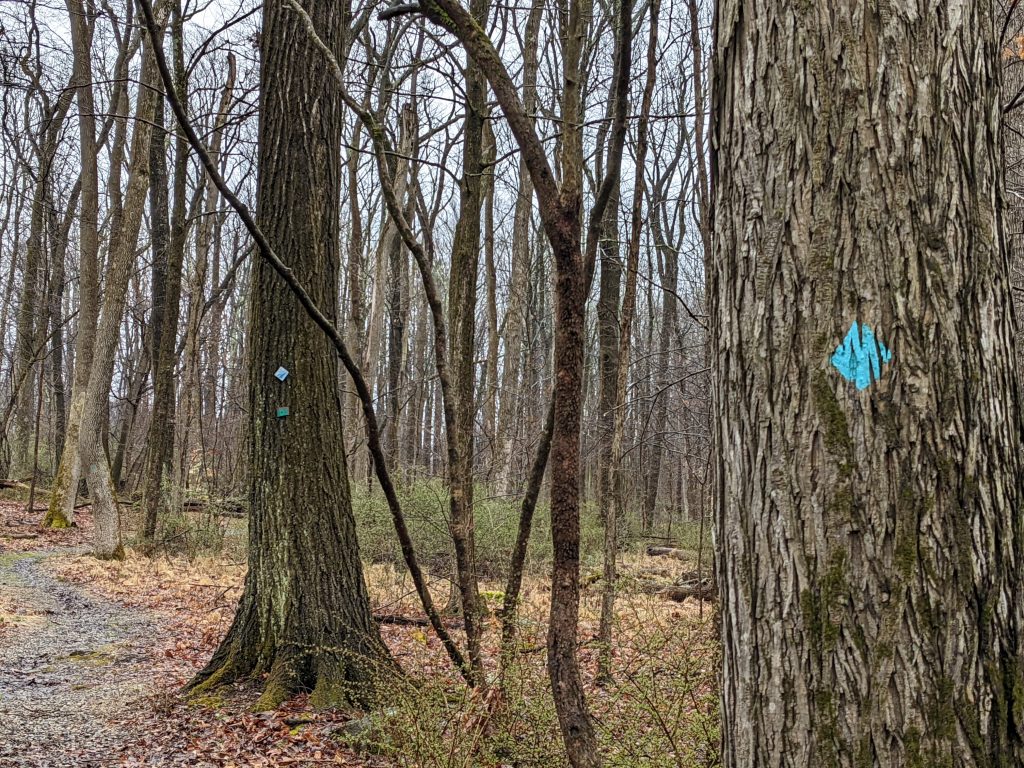 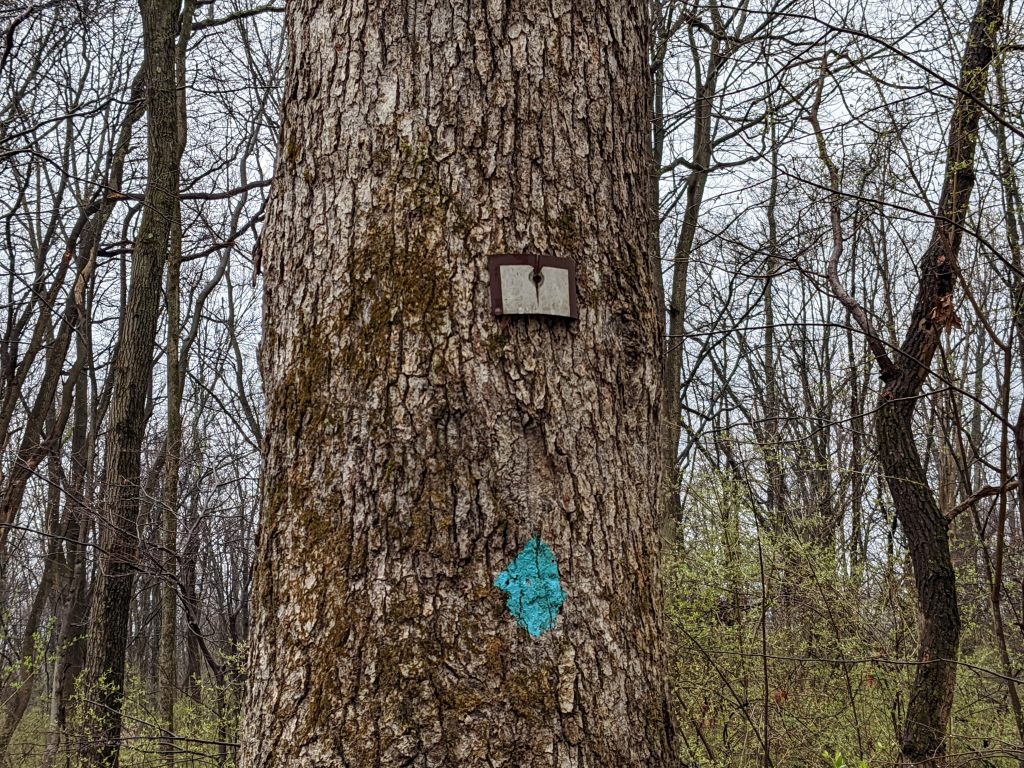 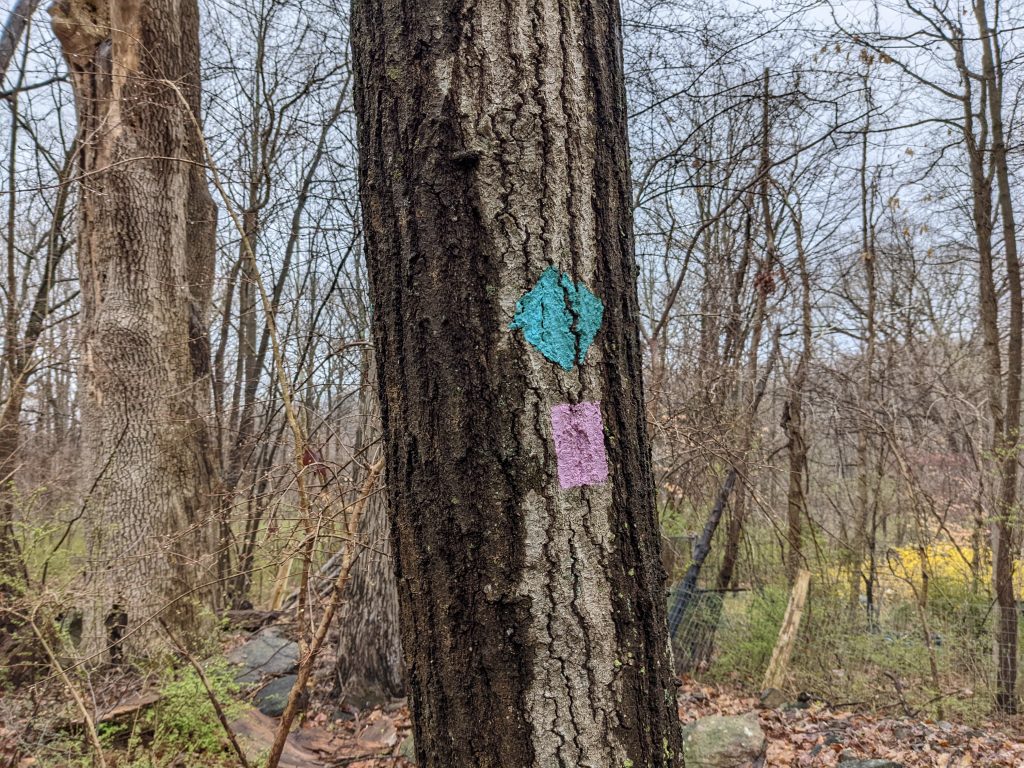 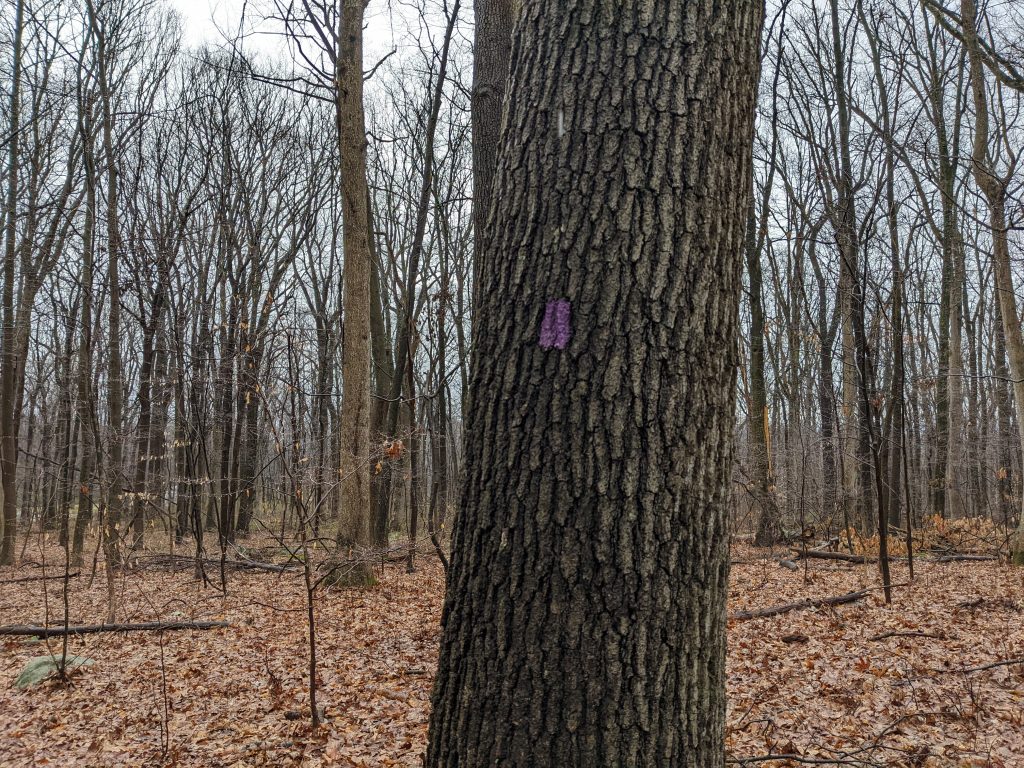 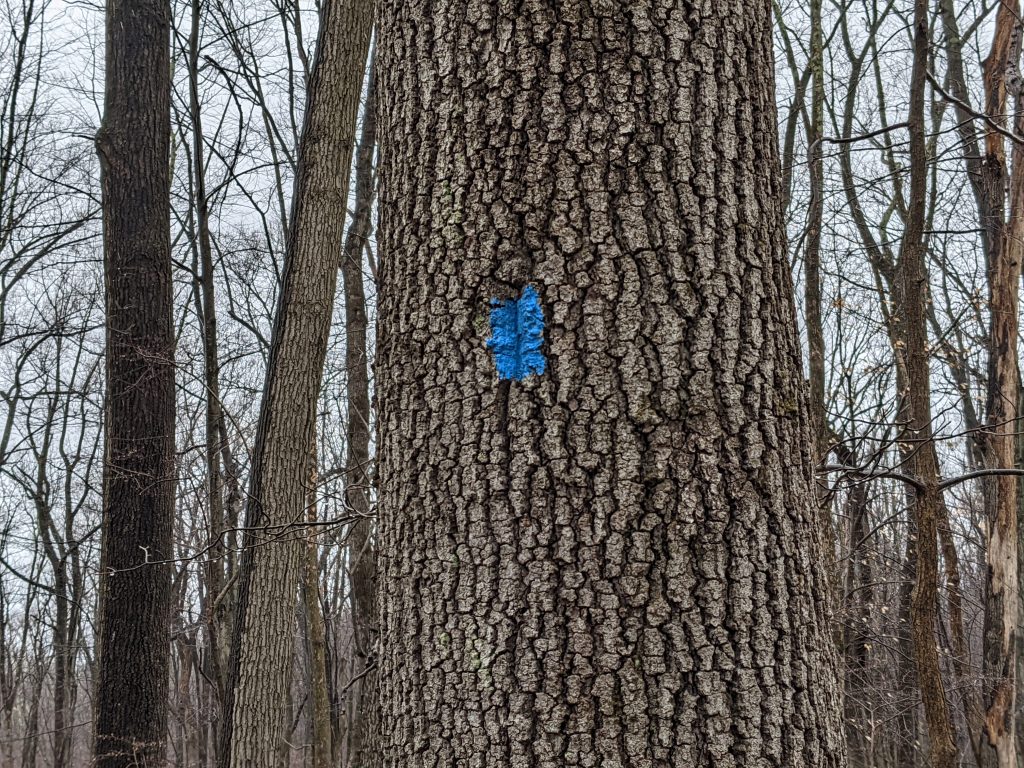