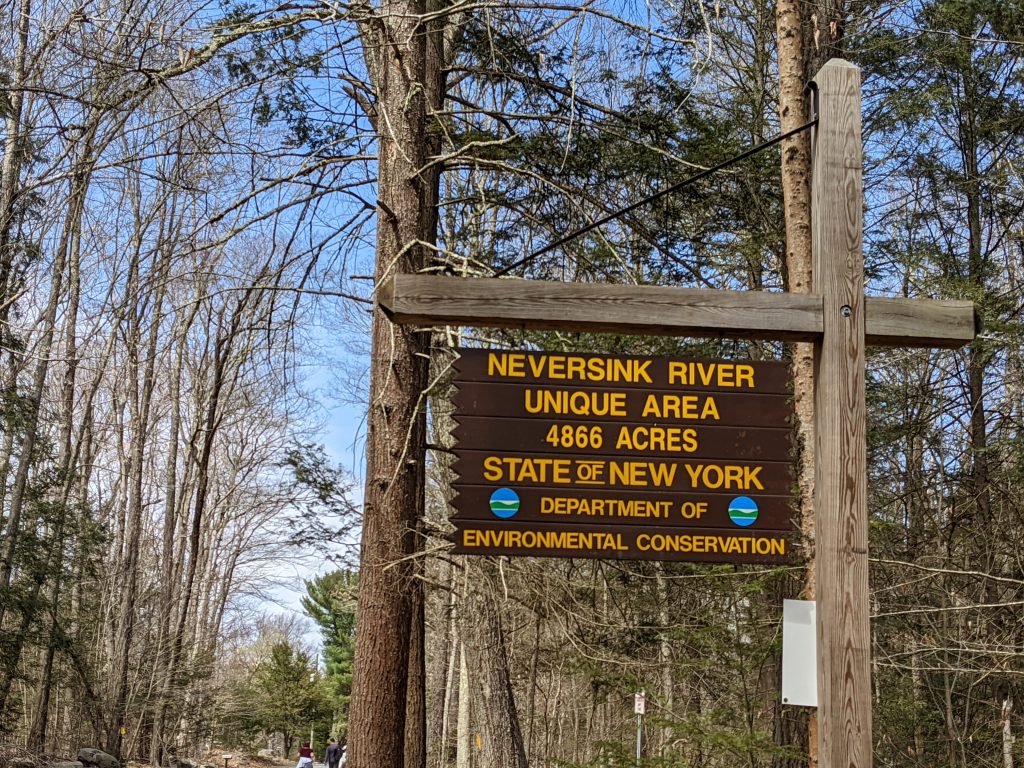 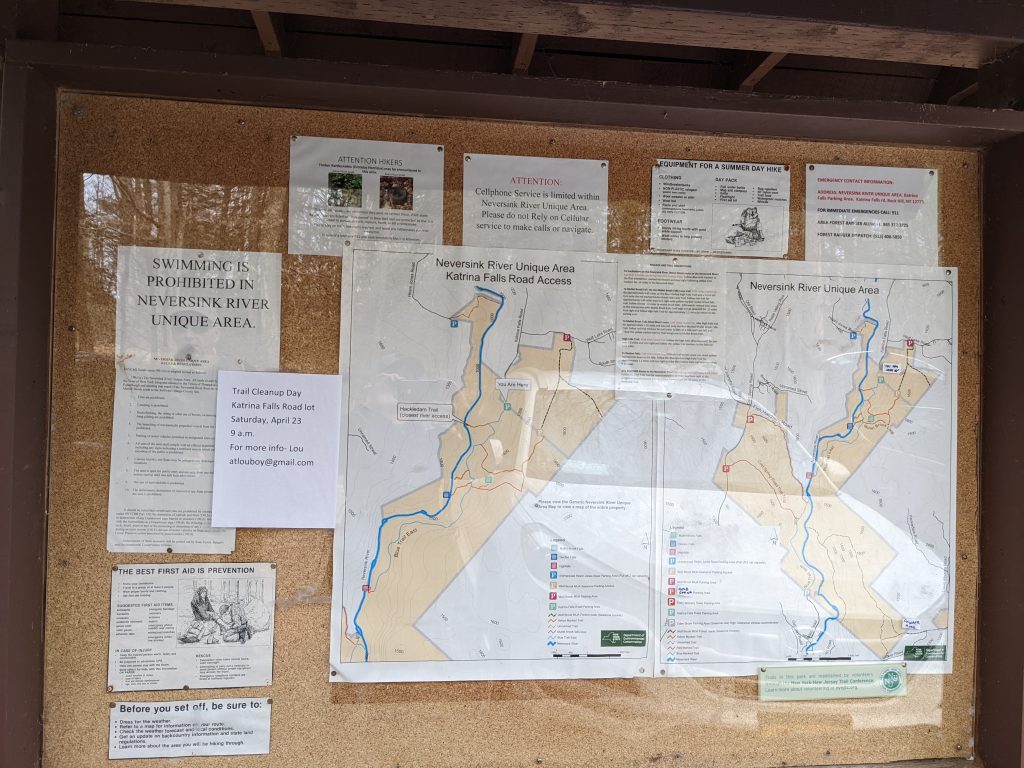 Trails – Blue, Yellow (multiple – these appeared to be spurs to the falls,) Red 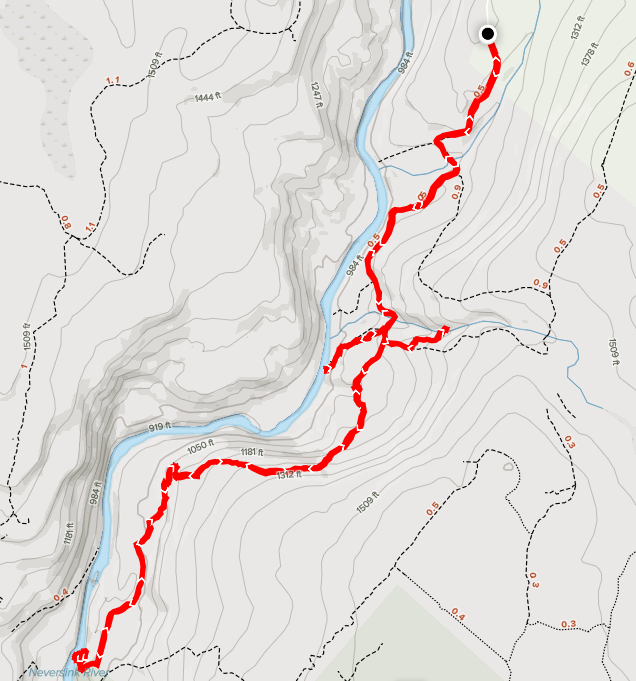 A couple of notes:

This was another great trip with the Monmouth County Parks System.  We did not do the full Red Trail loop, we did go to the falls though.

I’m in the process of baking off AllTrails vs. Gaia.  I would have included the Gaia map, but we drove off before I stopped recording.  And I didn’t figure out how to edit it until later.  I’m on the fence with Gaia, because of ambiguity with its elevation gain statistic.

Finally, I don’t have as many pictures as I normally would.  In fairness, this was a trip specifically geared to seeing the falls.  I was surprised that there were not many other “views.”  Most of the Blue trail is one big Rhododendron tunnel…which will really be nice in a month or so.

Our shuttle bus got one of the last (legal) spots in the parking lot.  Also in the parking lot were a group that was performing trail maintenance in certain areas, notably they were fixing one water crossing.  The Blue trail is mostly wide with some rocks, but not unbearable.  There are A LOT of Rhododendrons.

Mixed in with the hardwood trees are numerous pine groves. 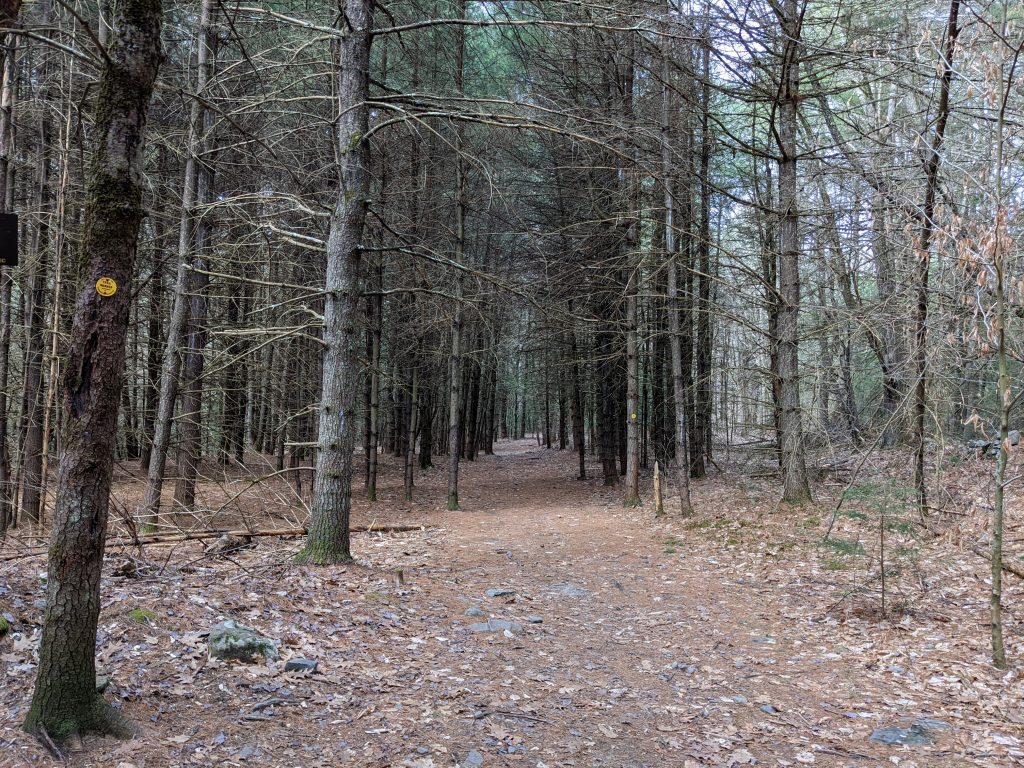 The area recently had much rain, and believe it or not, snow the week before.  The trails were dry, for the most part, with only a couple of areas of either really soft mud, or outright flooding.  The rain, though, provided extra water for streams and creeks; and meant that the falls would have a good amount of water flowing over them. 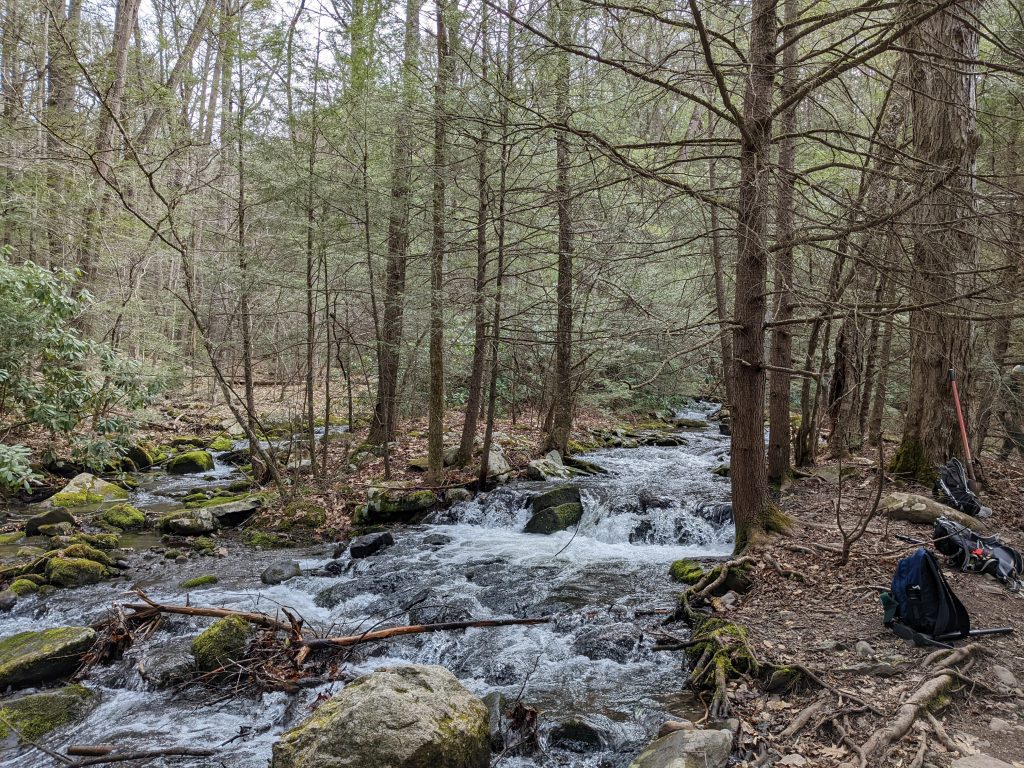 First stop would be Denton Falls, on the Neversink River, a short spur trail (Yellow) off the Blue Trail, which I’ve seen named on maps (only) as the Highland Falls trail. 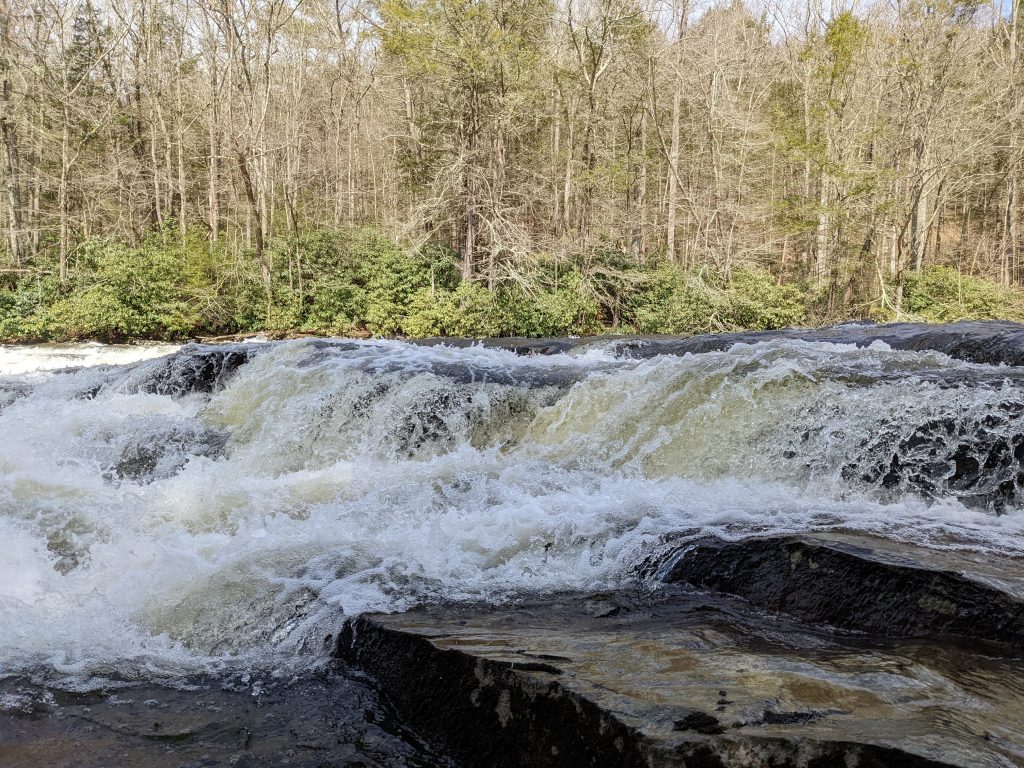 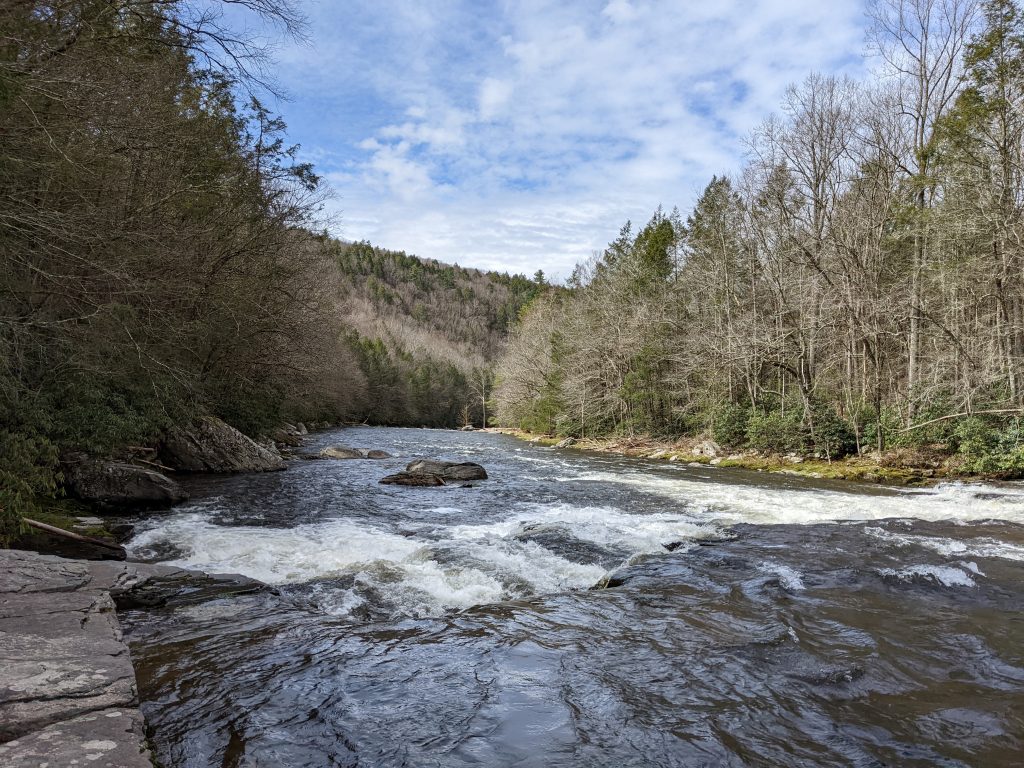 We only stopped briefly to have a quick snack.  Interesting for this hike, we had to hike DOWN to see two of the three falls, so most of our climbs were to come back to the Blue Trail.

To get to the second falls, we followed the Blue trail south and went over a large hill or small mountain.  Another spur trail (Yellow) took us to High Falls.  And to get to where we would eat lunch, we had to scramble over some rocks at water’s edge.  It reminded me of Giant Stairs, though much much smaller.  But, in scrambling, we were able to sit on rocks that jut out into the water and had a great view of the falls. 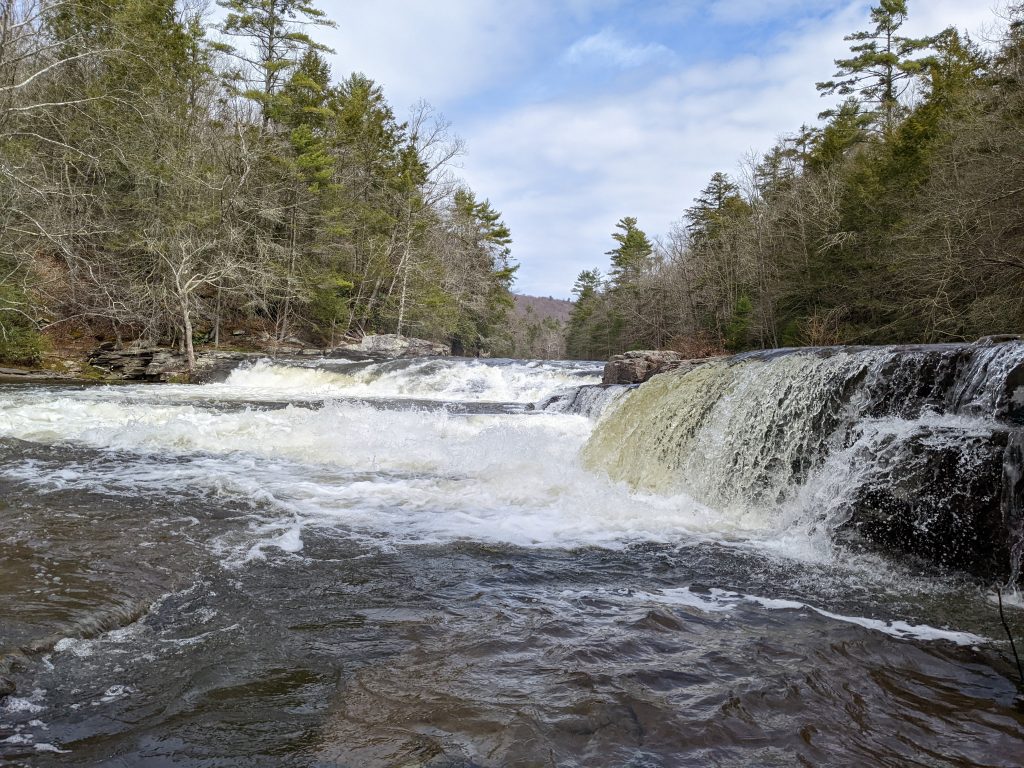 Here’s a shot of the cliff that was behind the rocks we sat on. 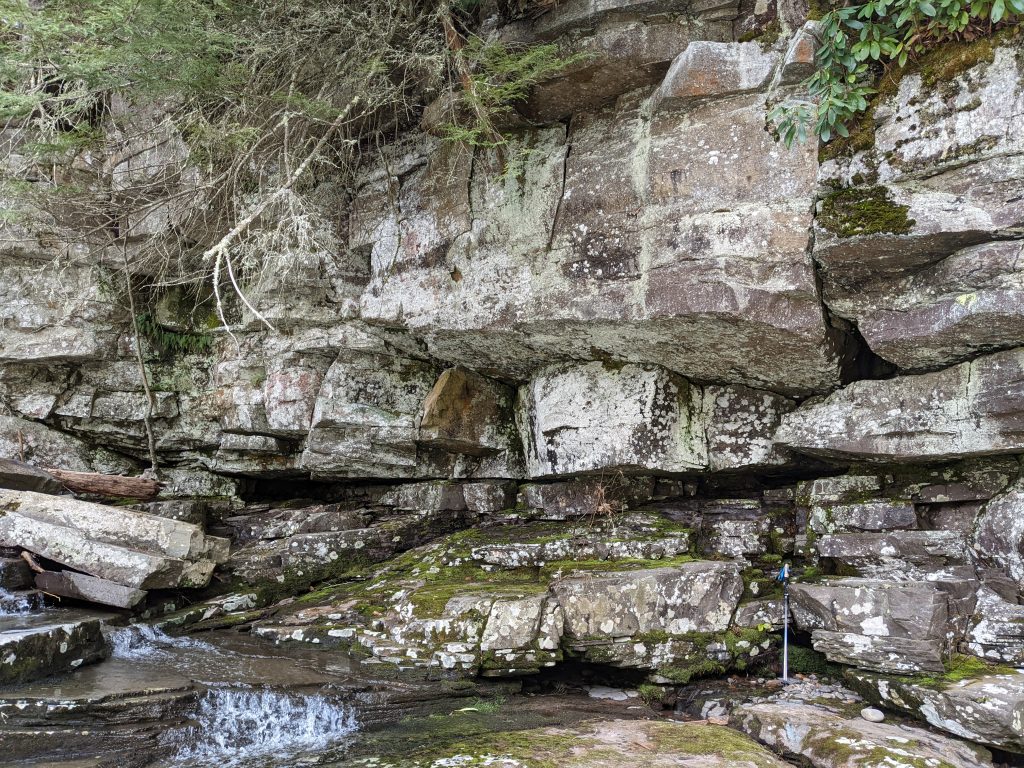 The Blue trail had a bunch of water crossings, some more fun than others.  In one crossing, we found ourselves walking OVER the water, it was gurgling beneath us, and we could see it looking into sink holes that had evolved over time. 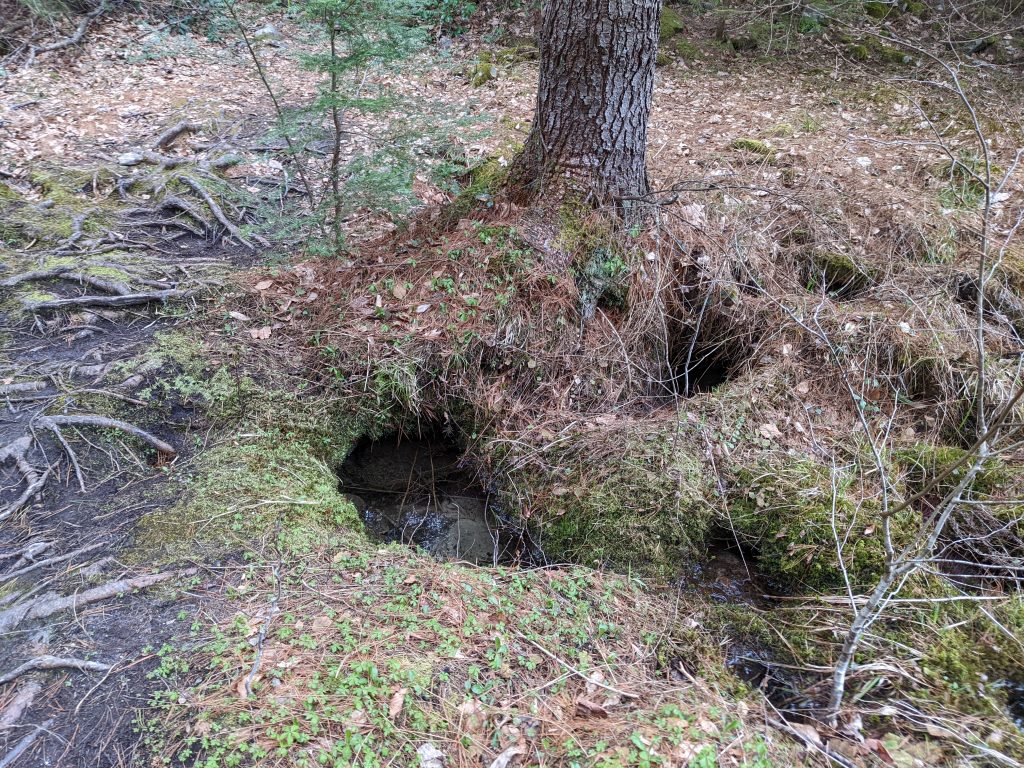 A pretty typical view of the Blue trail: 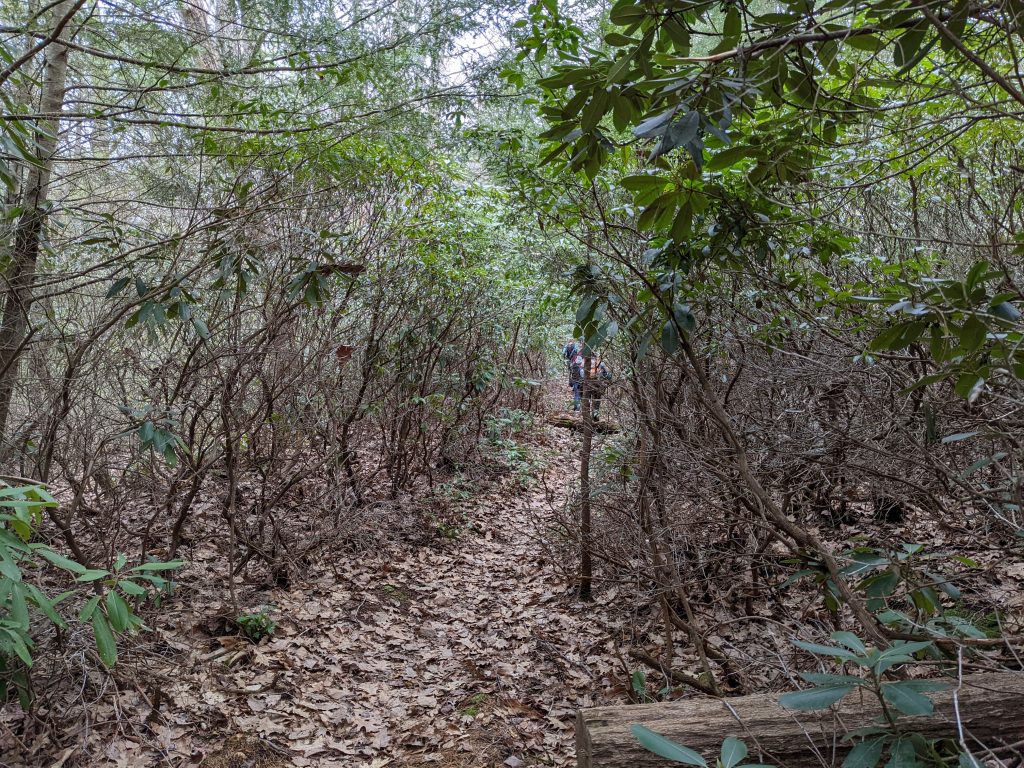 On our way to the third falls we passed a tree that I did not remember seeing before lunch, and I feel like I wouldn’t have missed it.  Besides the mushrooms growing off it, a pileated woodpecker had really done a number on the tree.  And curiously, he went AROUND all the mushrooms. 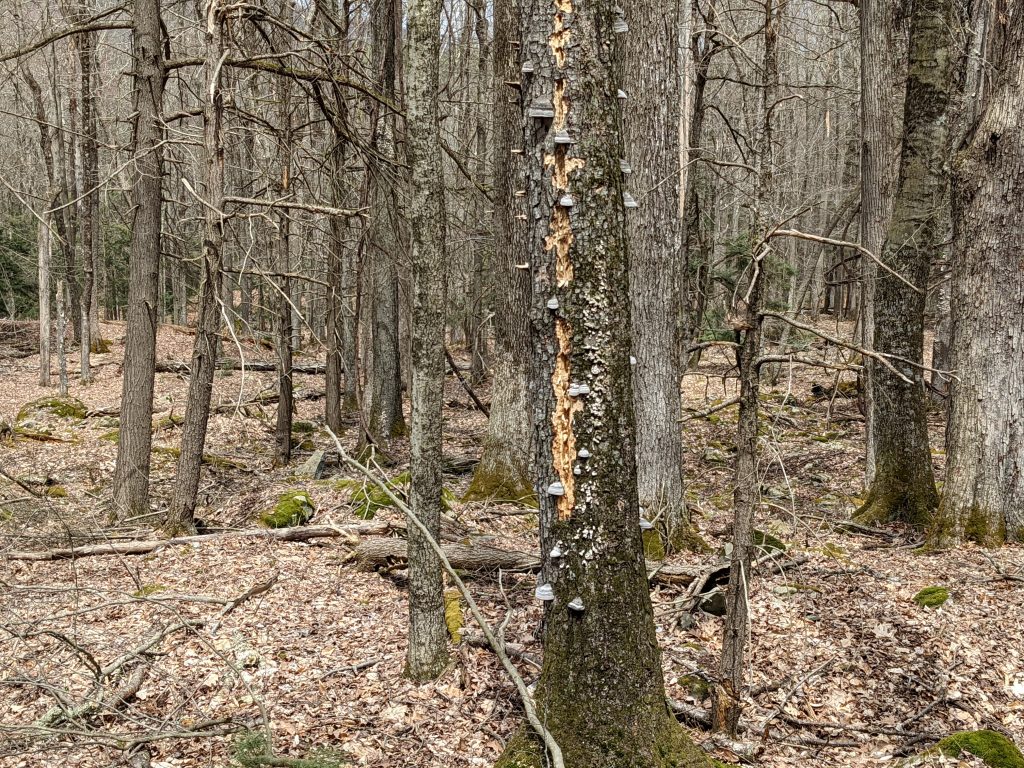 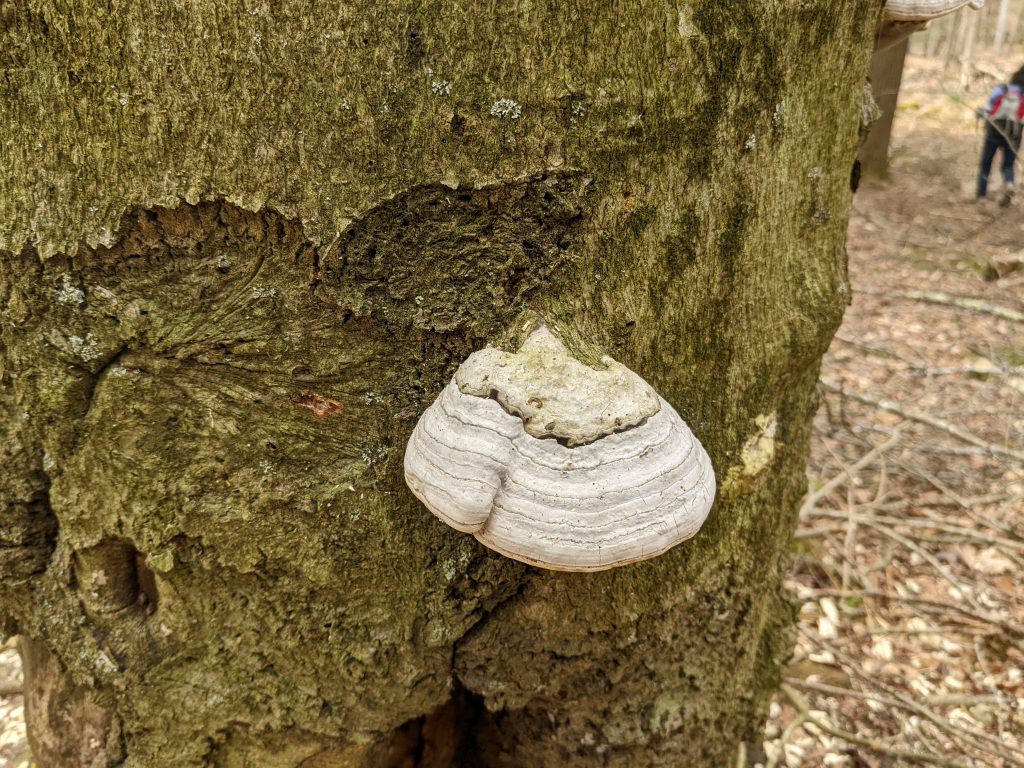 On our way back we made a right on the Red Trail (Mullet Loop Trail) and were on the trail for about one hundred yards before we turned left onto another spur trail (Yellow).  This took us to Mullet Falls, fed by the Mullet Brook.  Of the three, this was my favorite; probably because it was so much higher.  We stayed here for a few minutes to eat and take some pictures. 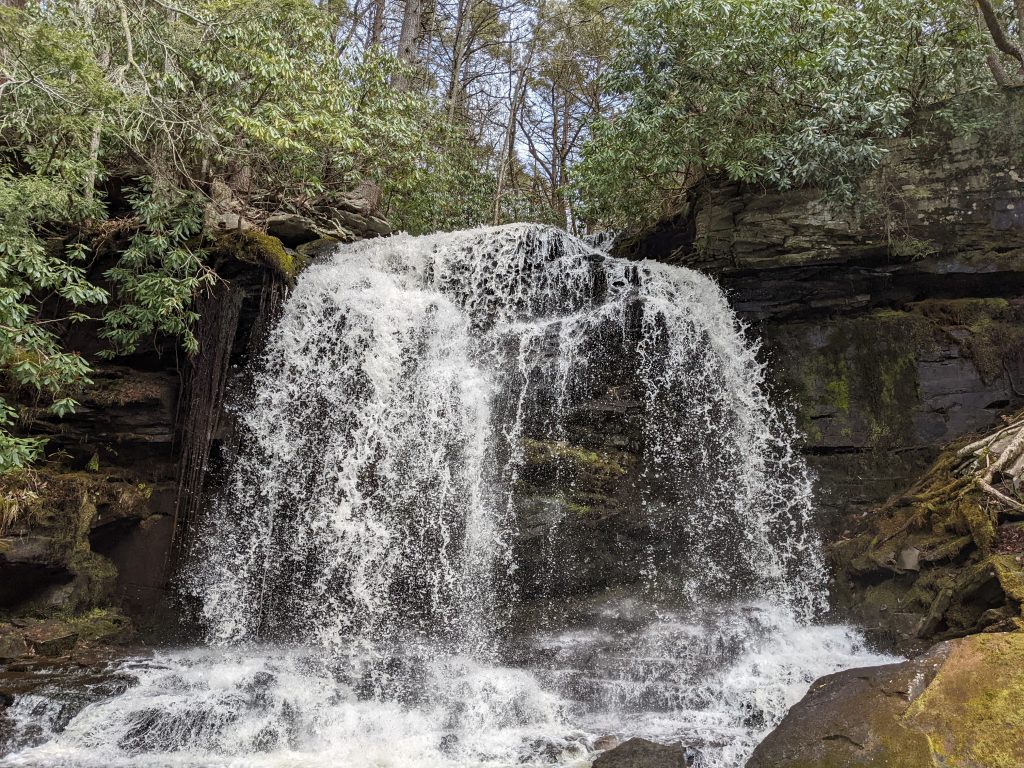 This was a really nice area of the southern Catskills to hike.  Interestingly, it was less than twenty miles from where I went to scout camp as a kid.  This trip was specifically designed to see the falls, there were no other views to speak of.  The trail is mostly flat except for going over the mountain and descending to see the falls.  I highly recommend this hike to see the falls.  Spring was great to see the water, I bet Fall is great with the colors out.

One final note:  You’ll notice in my picture of the trail kiosk a sign alerting hikers that there is no cell signal and not to rely on phones for navigation.  It is true, we all lost signal quickly.  However, all of our GPS’s seemed to work fine. 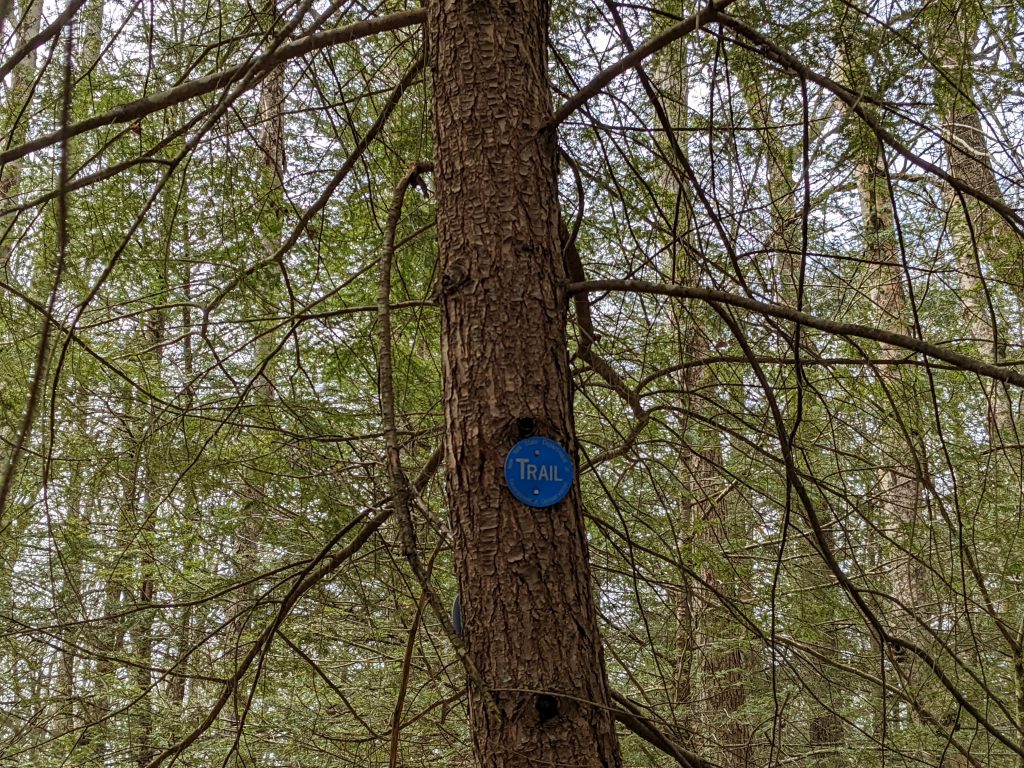 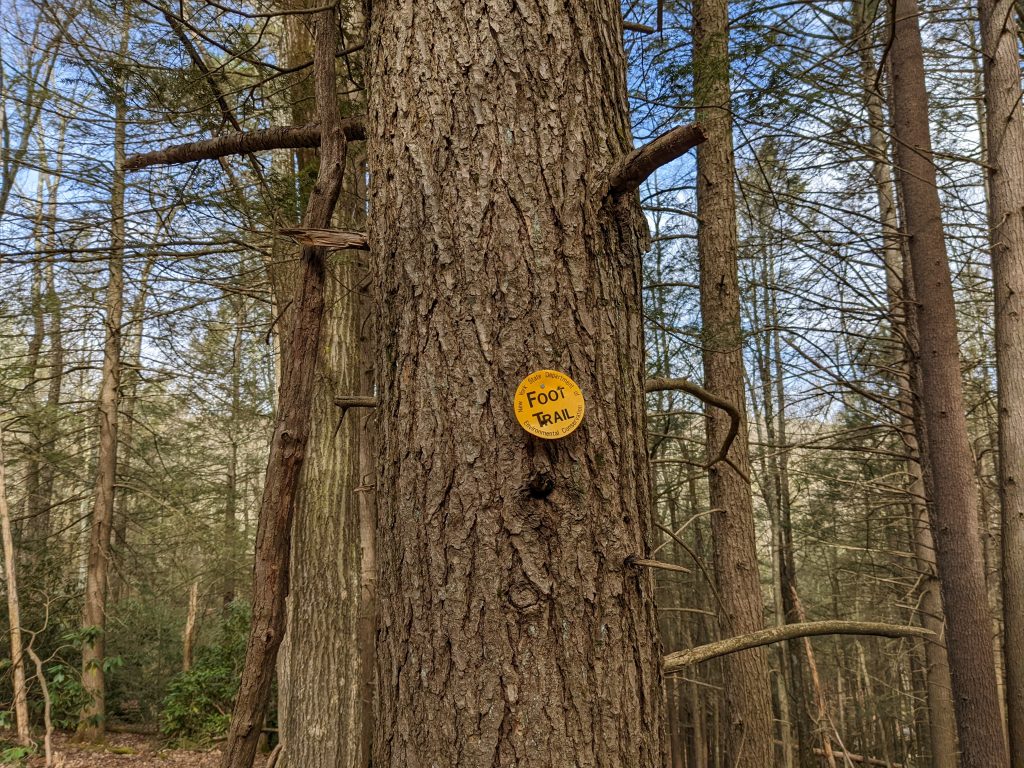 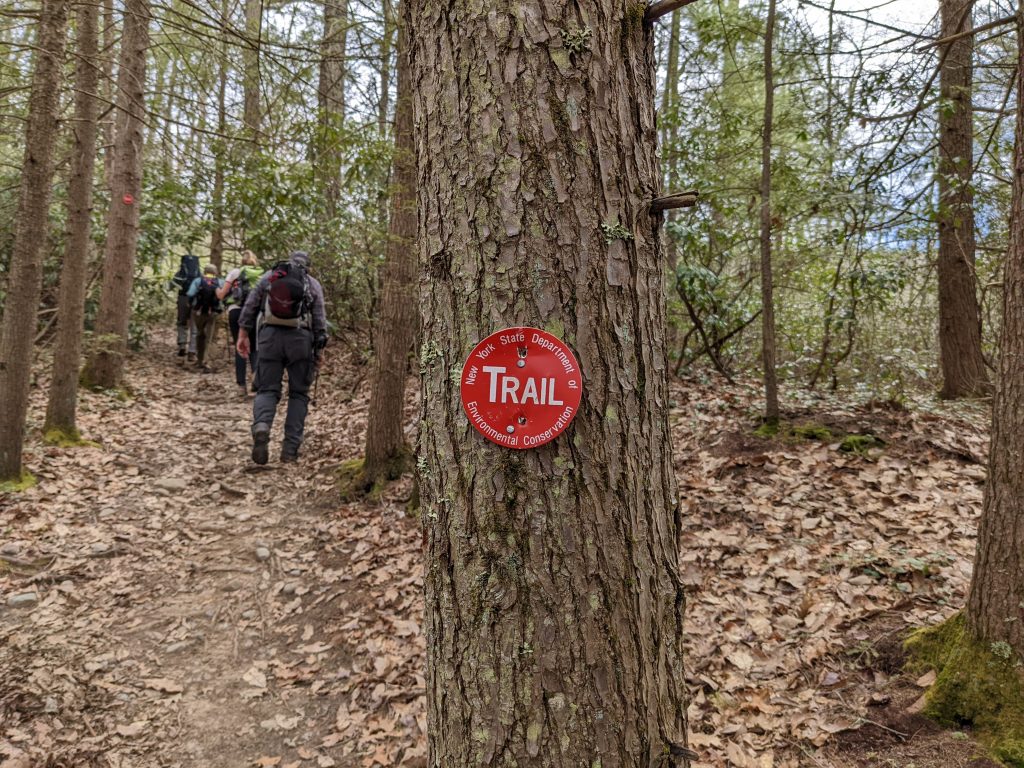