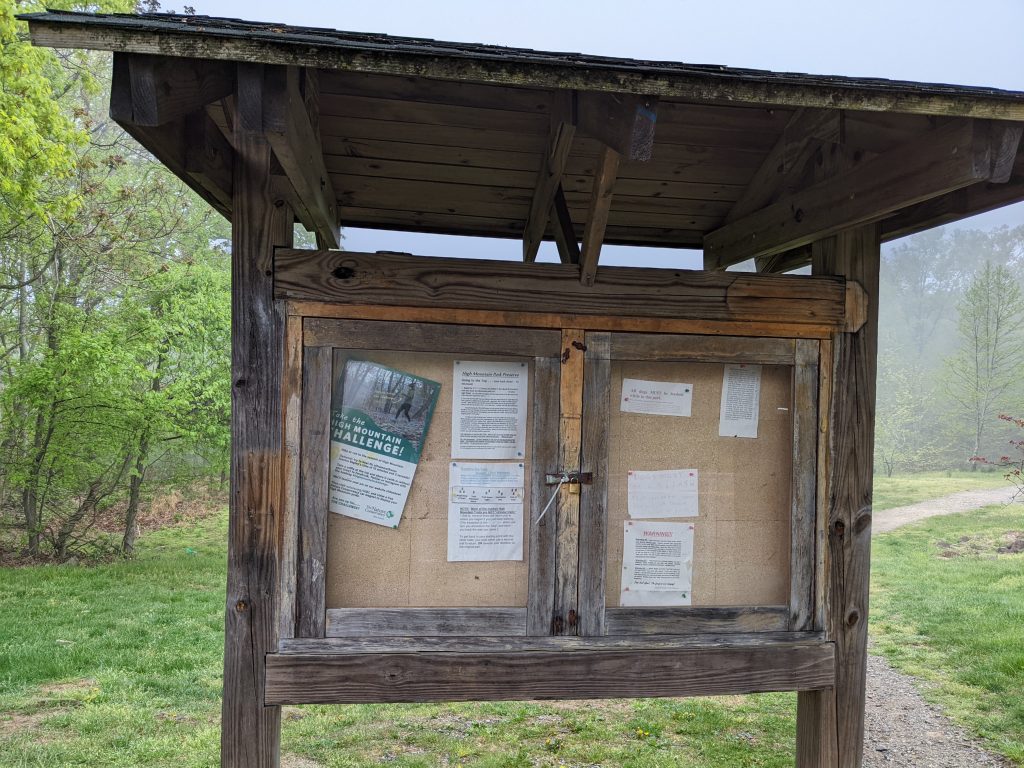 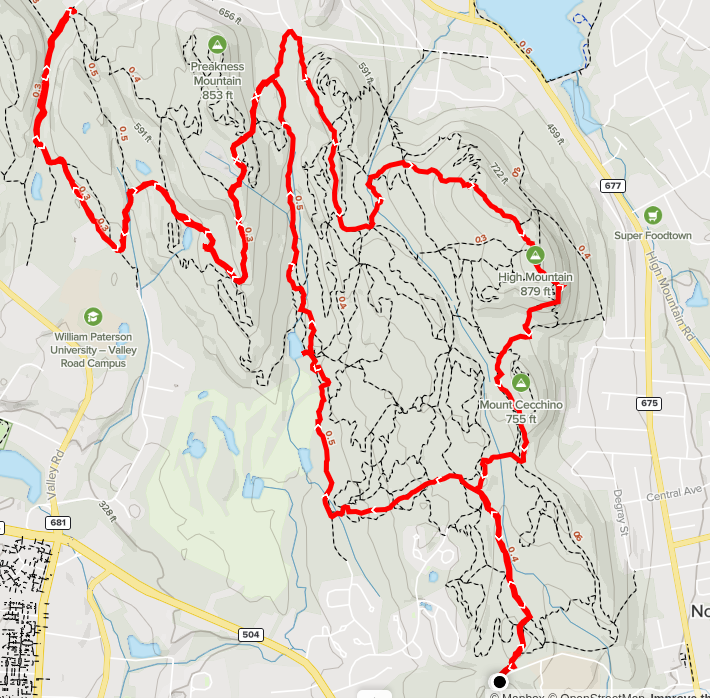 Rain was to move in today, so I started early.  And it was really foggy out.  I got to the trailhead and decided not to wear the fleece, which was a great decision as the temperatures climbed into the 70s – and it became humid.  There were not many cars in the parking lot – it would be packed when I returned.  Most people (I saw) stuck to the red and yellow trails, climbing to the top of the mountain.  I saw no one on any of the other trails. 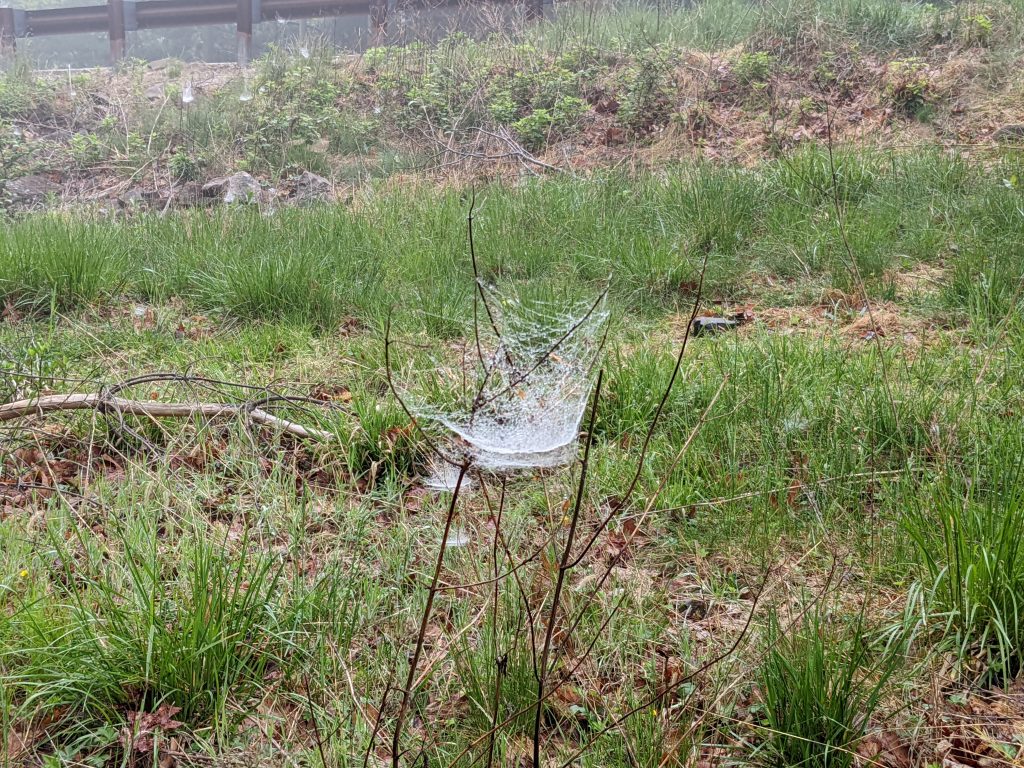 It rained a ton the day before, but the trails were fairly dried out.  There were a couple of spots that were extra spongy, and you could see where the rain traveled downhill.  Trails were mostly wide with packed dirt, but there are numerous locations of ankle-rolling rocks.

Here’s the beginning of Red: 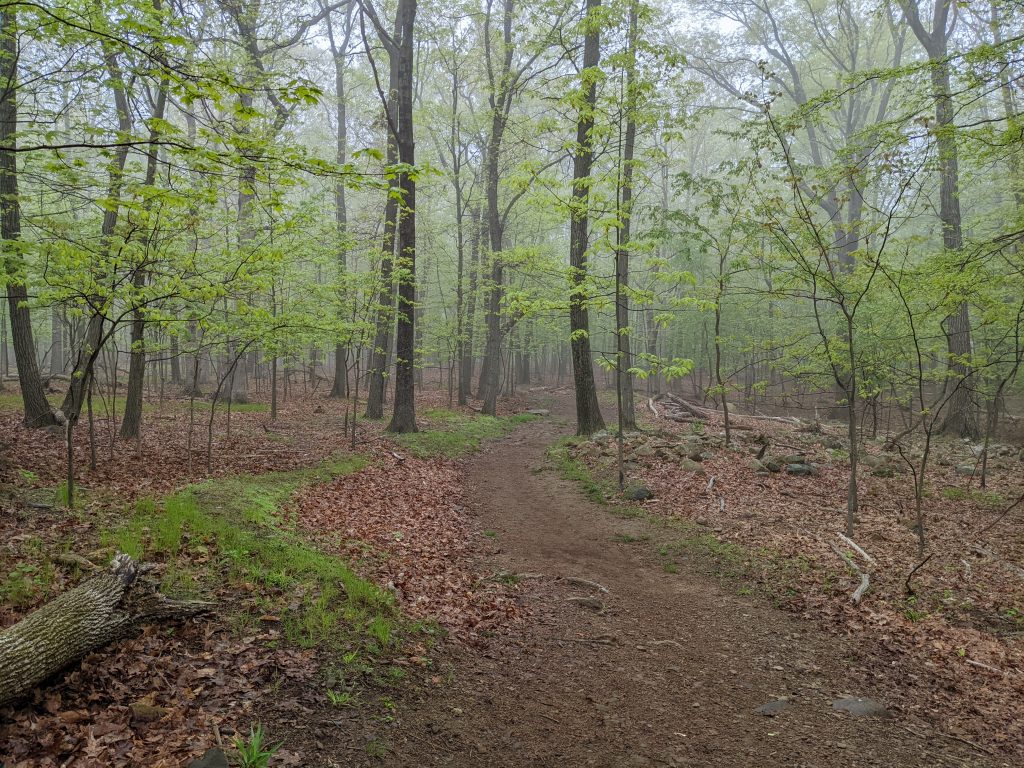 There are a couple of big rocks to start out. 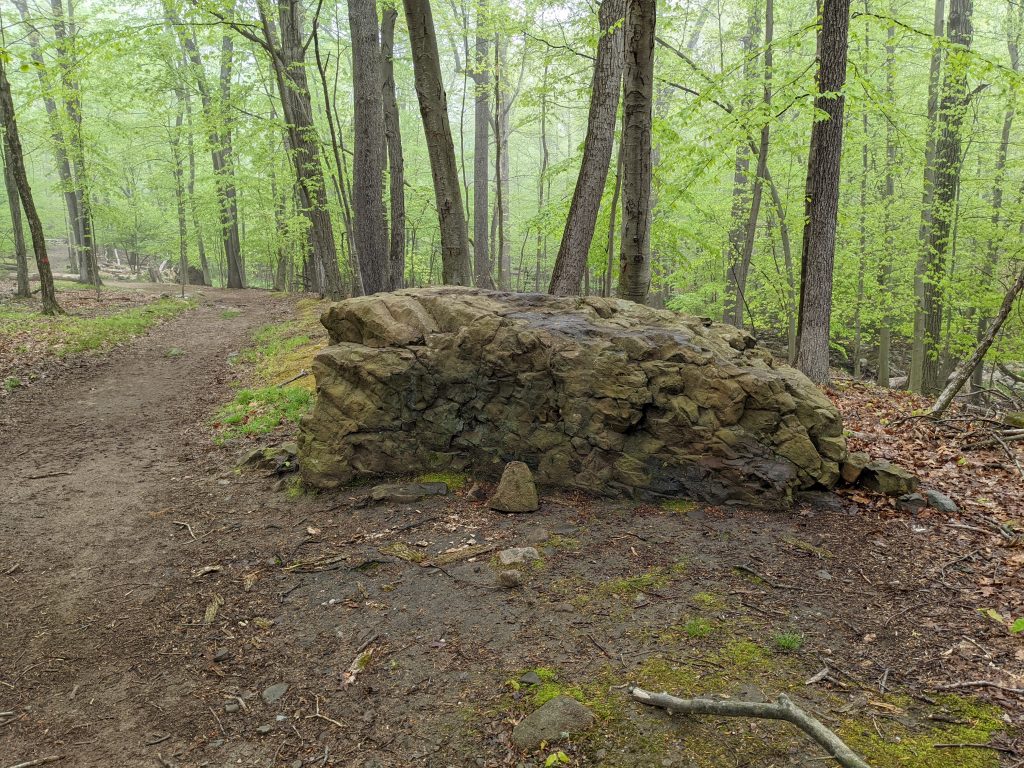 This was hanging at the junction of the white trail.  Don’t ask, I have no idea.  Just when you think you might have seen all the weirdness… 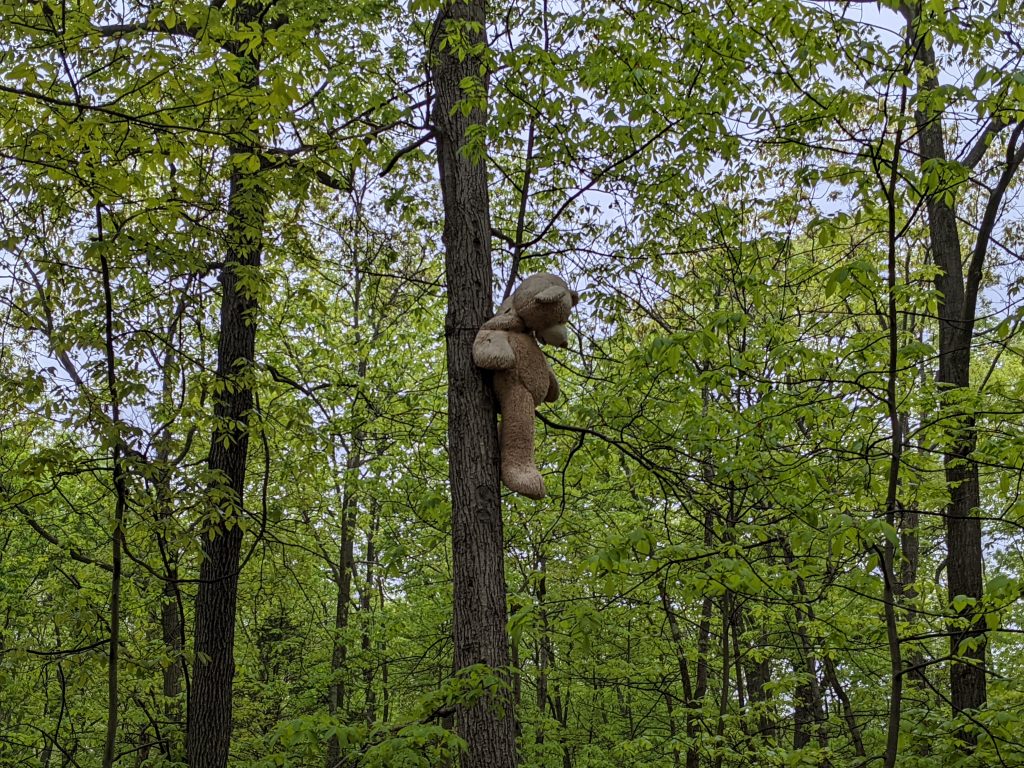 Lots of polypore out. 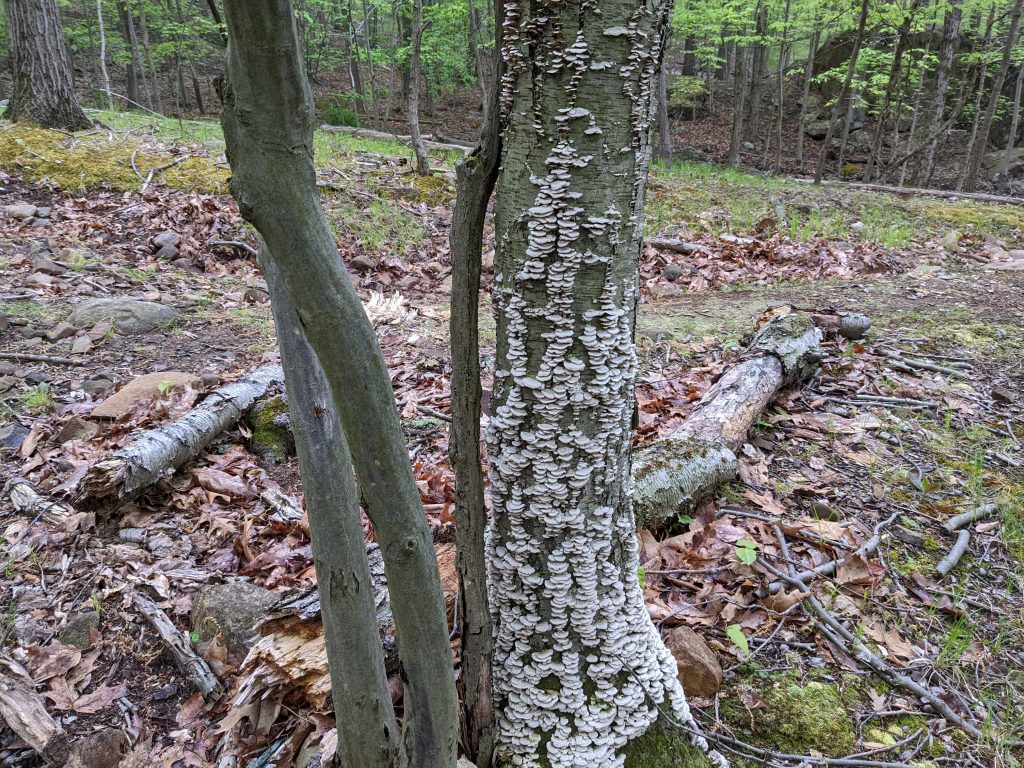 The White trail descends a bit, and you could see where yesterday’s rain ran downhill.  The trail is on the right. 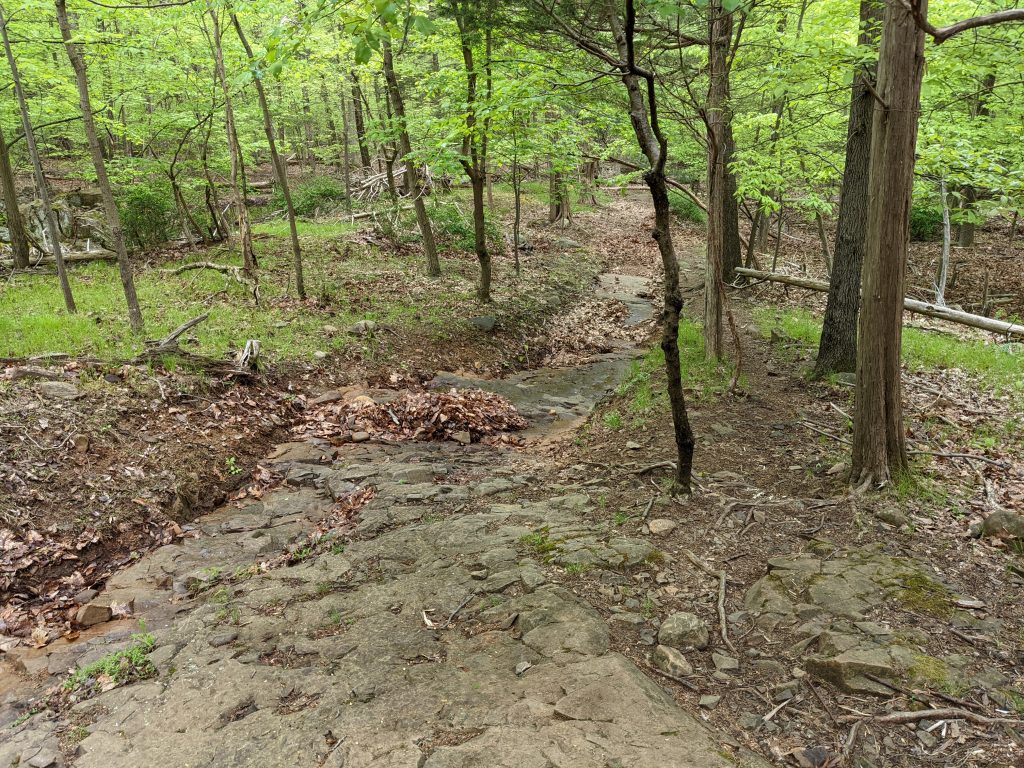 Heading north on White you can see the land opening up in front of you.  The trail goes right by:

I watched for a bit.

The White trail continues north.  Curiously, it is also blazed with a yellow blaze, that is not on the map.  I don’t know if it is a continuation of a trail from another park or not.  Here’s where it turns away from white. 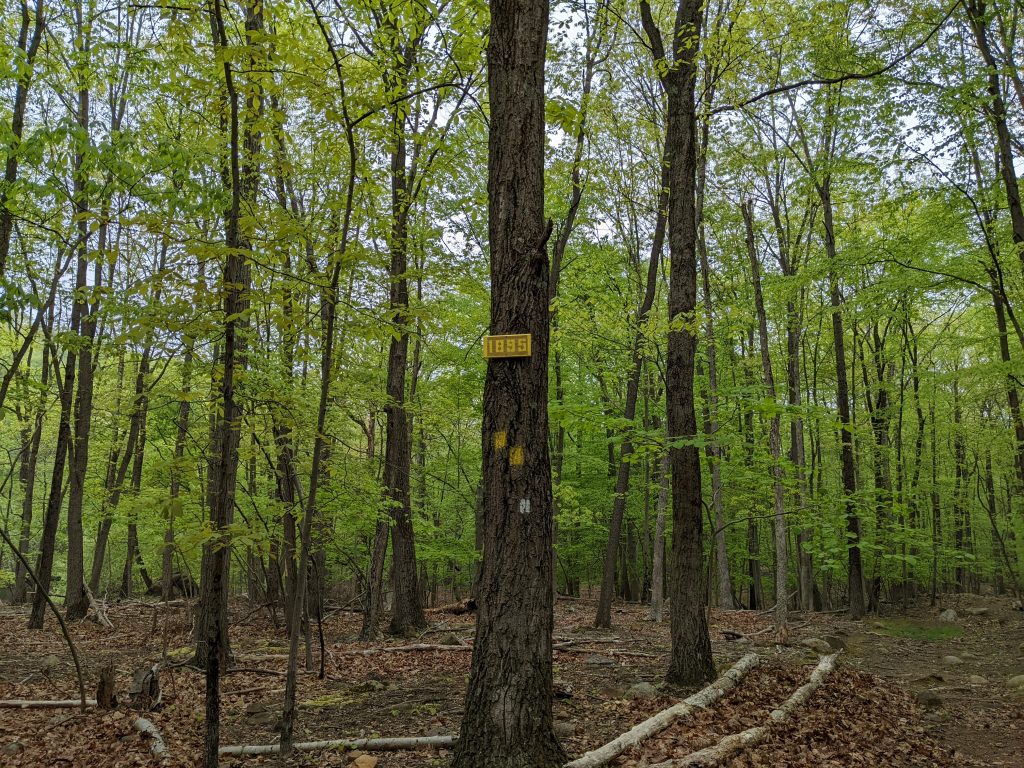 As I approached the bank, many frogs jumped into the water.

Further on, I disturbed a big bird in a tree; which startled me.  He flew to a tree not to far away, and I was able to get this picture.

A nice feature to this park are signs posted every so often with a number on them.  If you were to get in trouble, you could call 911, and give them the sign number and help would be on the way.  (Though it might take a while.)  You don’t have to worry about cell service…it’s amazing that this park exists with Wayne and Paterson so near.  It was really quiet on the trails away from the mountain save for planes on their approach to Newark airport. 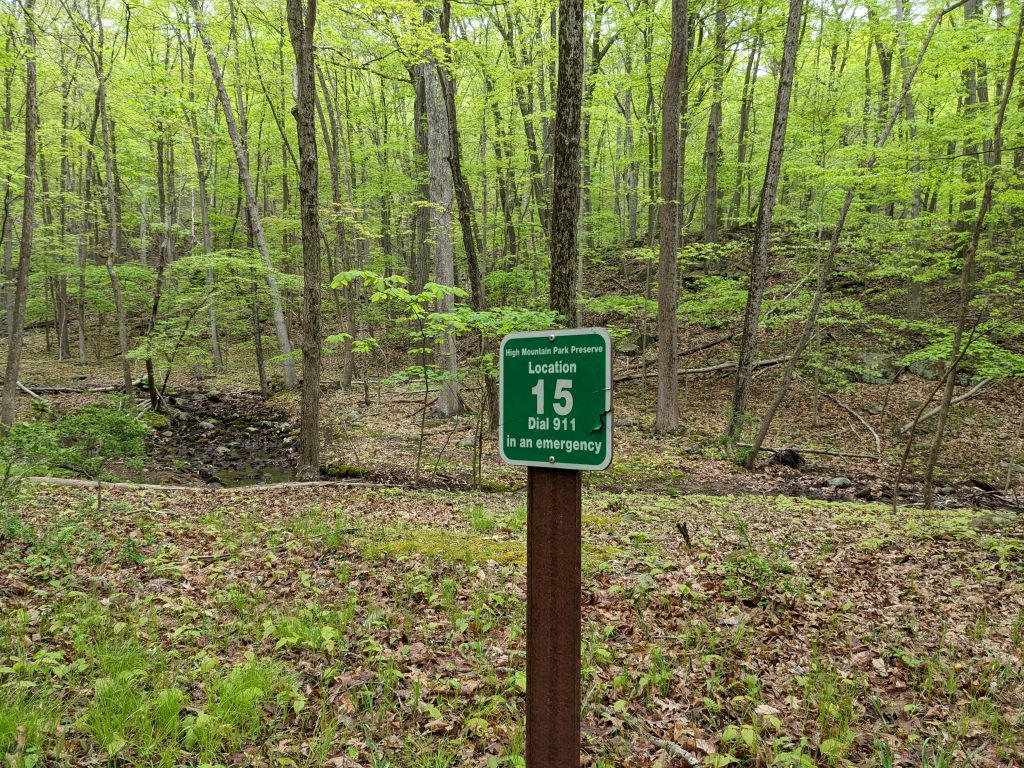 I came to Franklin Clove, which is a gorge between two sheer cliff faces.  Walking through the gorge was 10 degrees cooler and very very quiet.  Most of it was like walking on a cobblestone road, though picture the cobblestones as loose and all over the place. 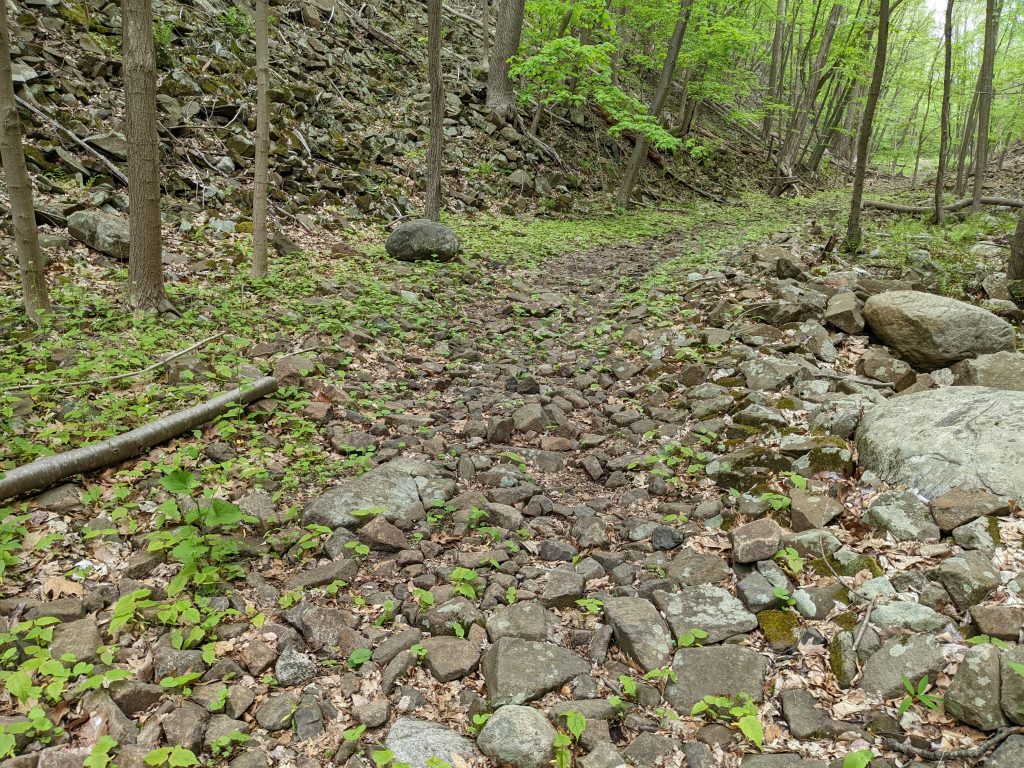 Instead of taking the orange trail to its end, I took a small spur trail to see the waterfall.  AllTrails has it named Buttermilk Falls, but I wouldn’t really compare it to THE Buttermilk Falls.  And I was surprised at how little water was going over it considering the rain we received yesterday.

I thought about trying the blue trail which would have added an extra three miles onto the hike.  I’m glad I didn’t, as I had miscalculated in the first place, and did a few more miles than I anticipated.

And it wouldn’t be hiking in New Jersey without finding a car in the woods. 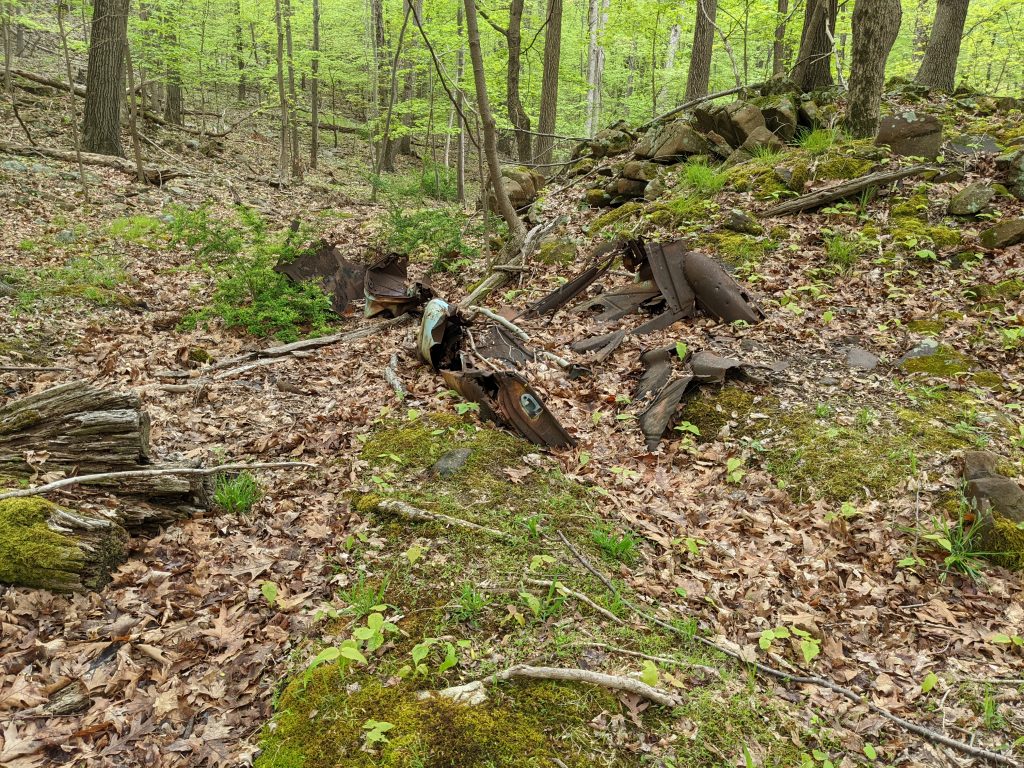 I called this section “The Ramp” though I don’t know if it has an official name.  Essentially you walk up a huge rock that resembles a ramp.  It’s quite easy, and smooth, which beats the ankle pounding small rocks.  The steepness doesn’t come through in the picture. 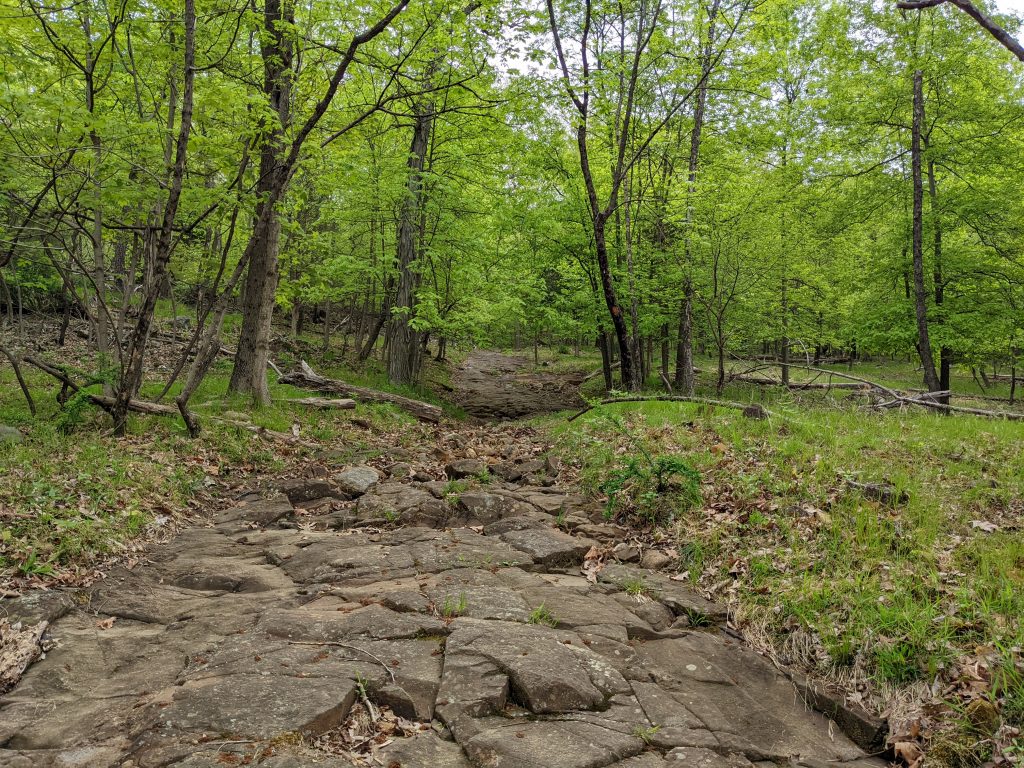 I was meandering along at a good pace and I rounded a corner when right in front of me on the trail was a good-sized black bear.  He couldn’t have been more than 50 feet in front of me.  The problem was, he was on the trail, where I needed to go.  I quickly scanned for cubs and didn’t see any.  Day made.  By the time I got my phone out, he had run off the trail, probably 50 yards or so away. 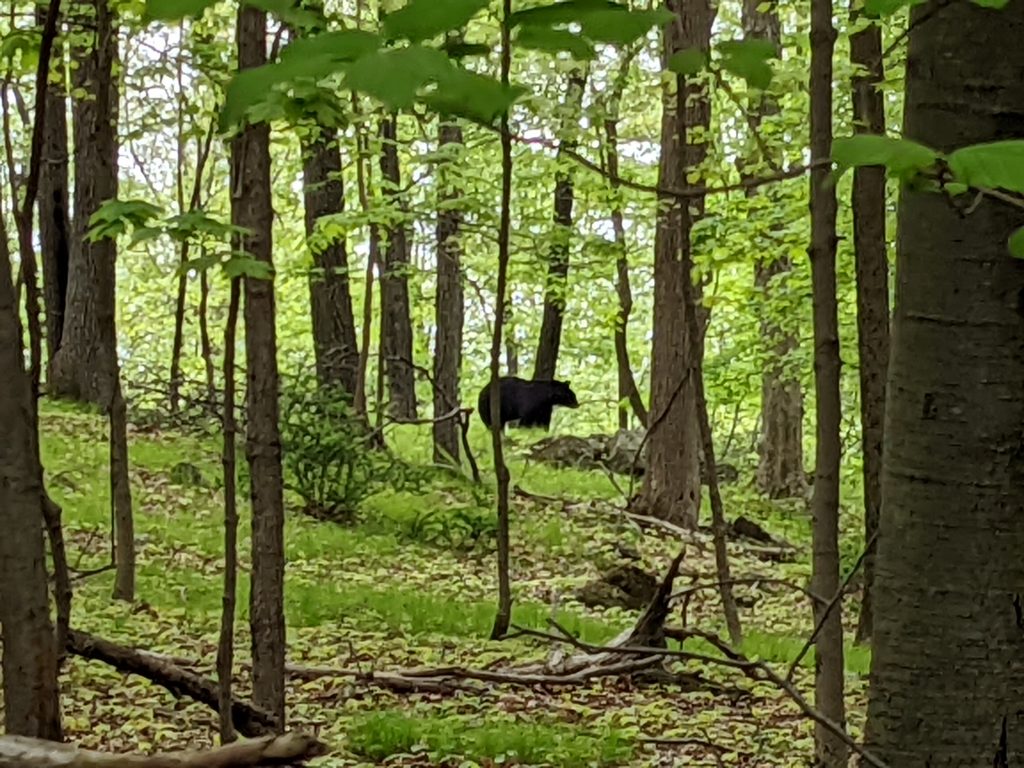 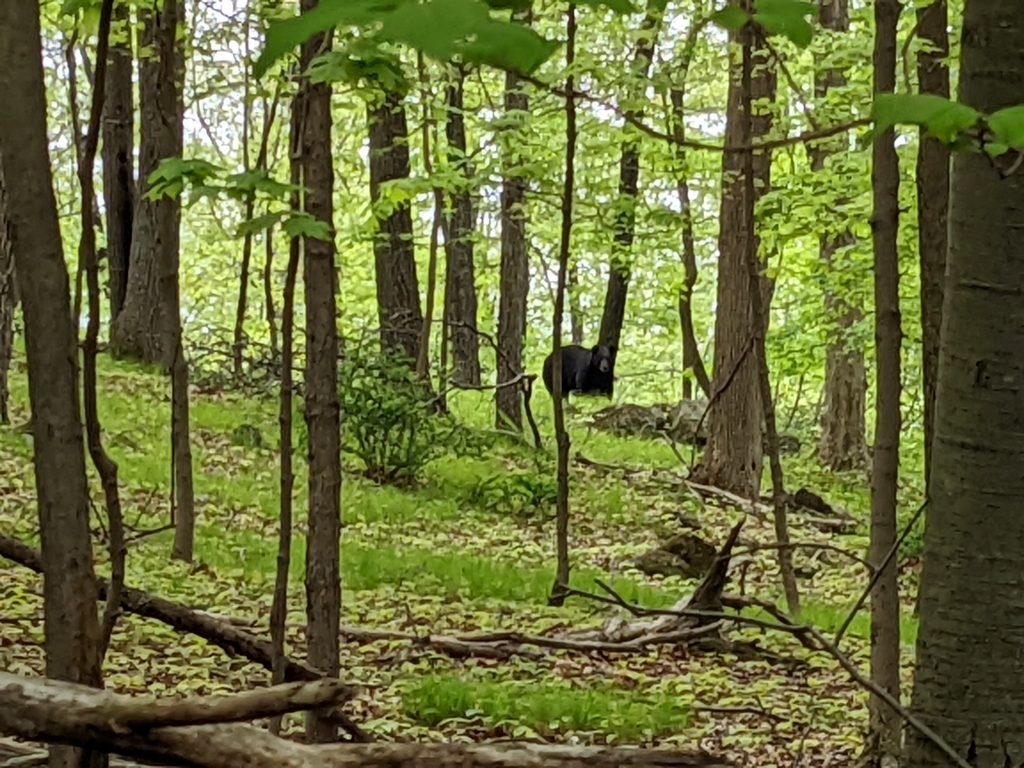 Another very cool bear encounter.  And thankfully, a positive encounter.  Like the last time, this bear looked up at me, definitely saw me, and took off.  After this, it was hard to concentrate on the the surroundings. 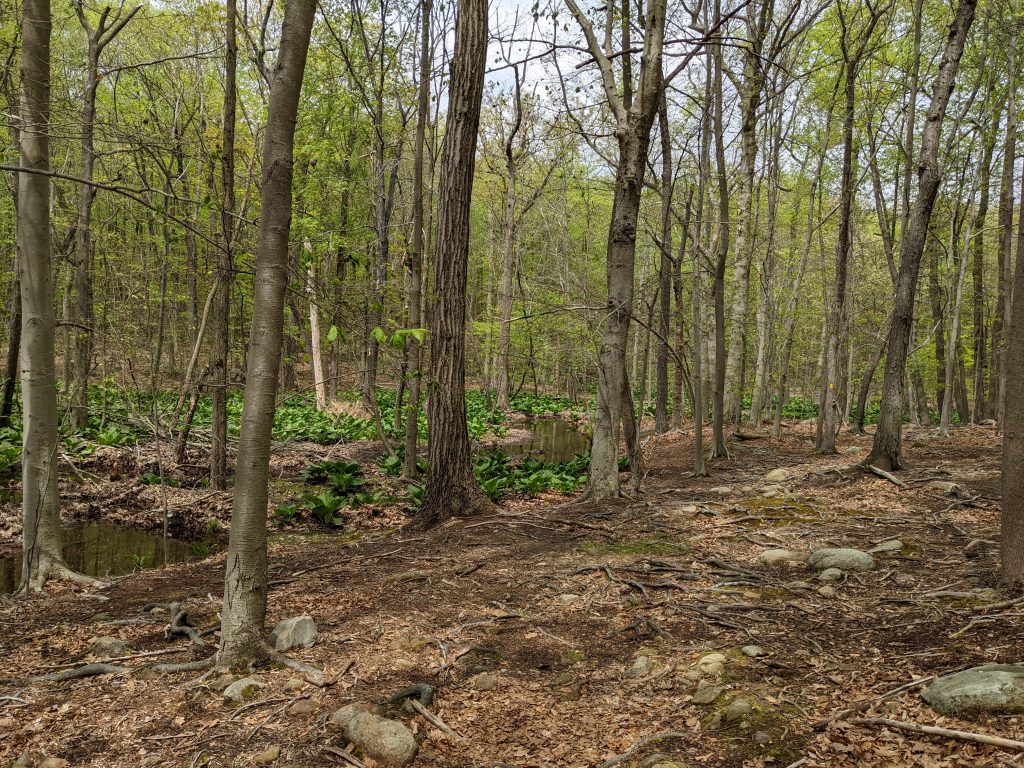 The yellow trail heads up High Mountain, and here I would see more people.  The overlook has a giant star, placed by the town, and powered by solar panels. 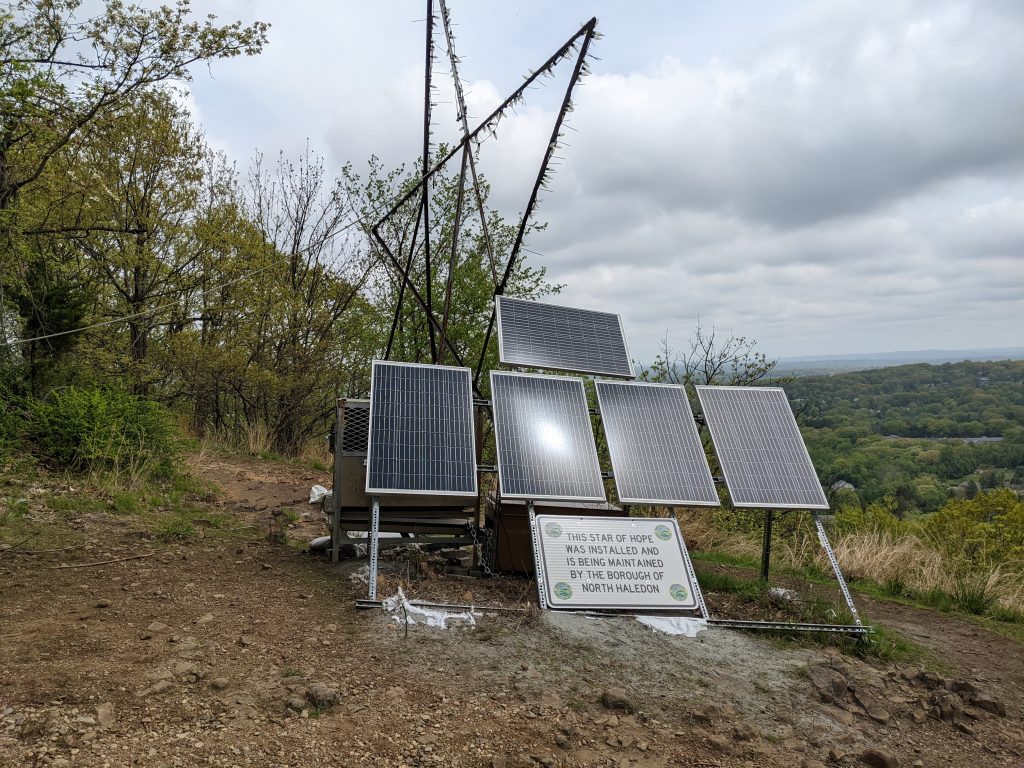 It was cloudy, though the sun had peeked out a couple of times.  However, you could just barely make out New York City from the overlook.  The picture doesn’t show it. 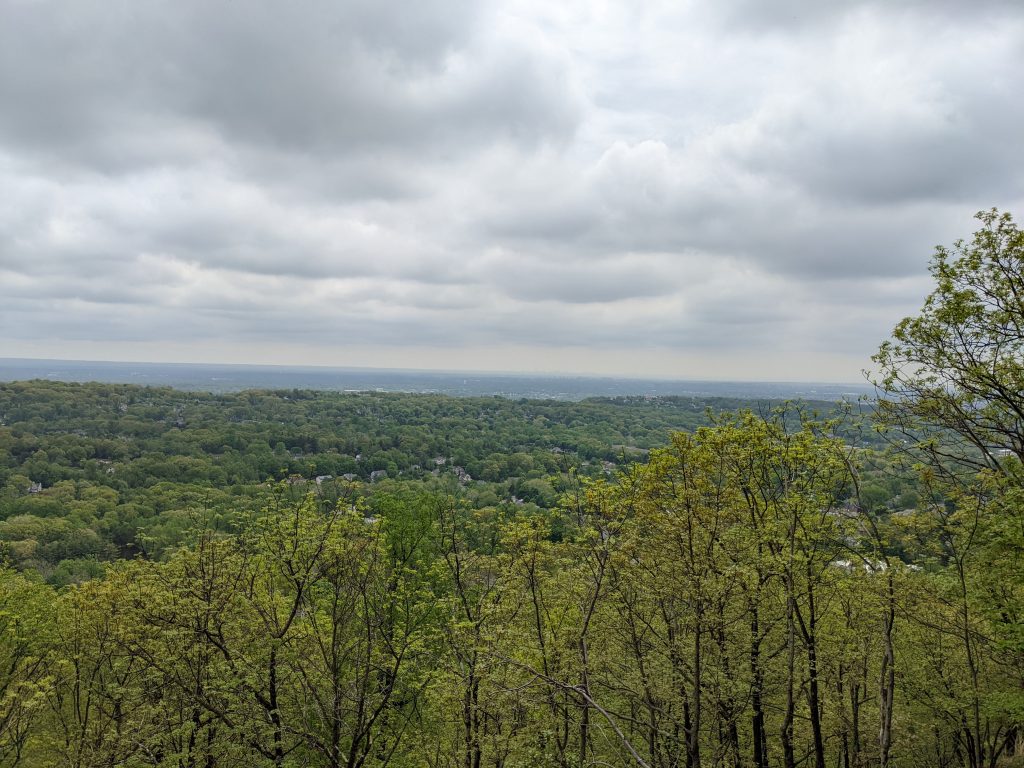 This is a nice park, tucked away from both Wayne and Patterson.  I will come back to hike the one trail I neglected, though had I done it today, I surely would have missed the bear.  The lot is not big, so get their early.  The trails up and down the mountain are where you will see everyone – you will have the rest of the park to yourself. 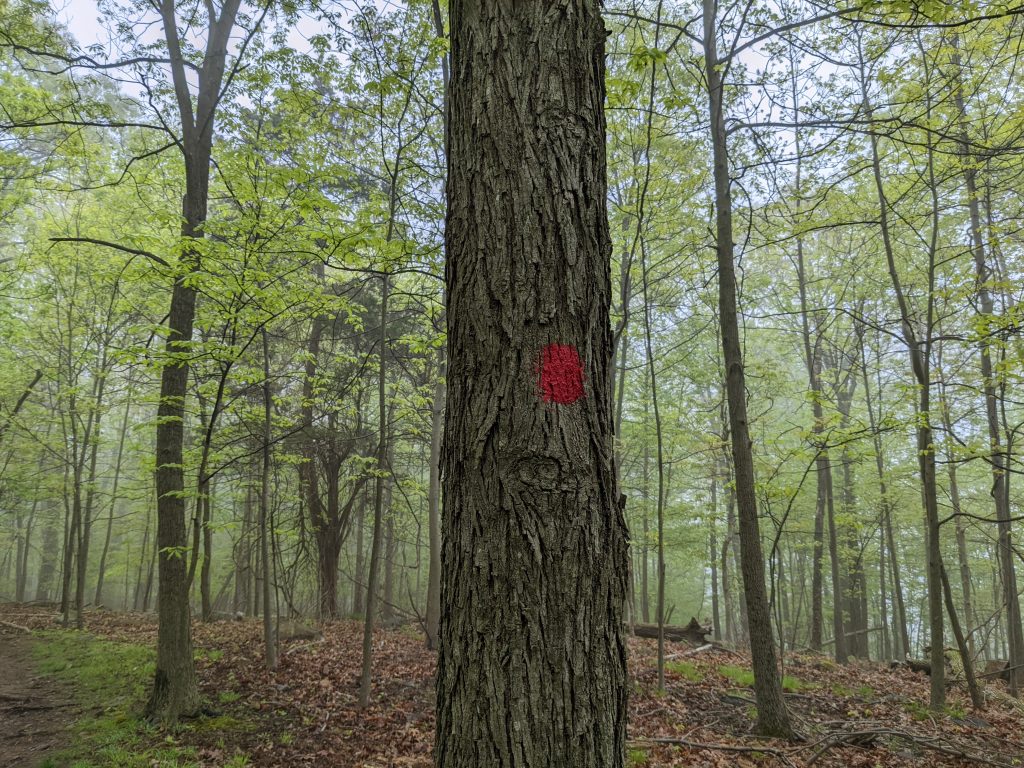 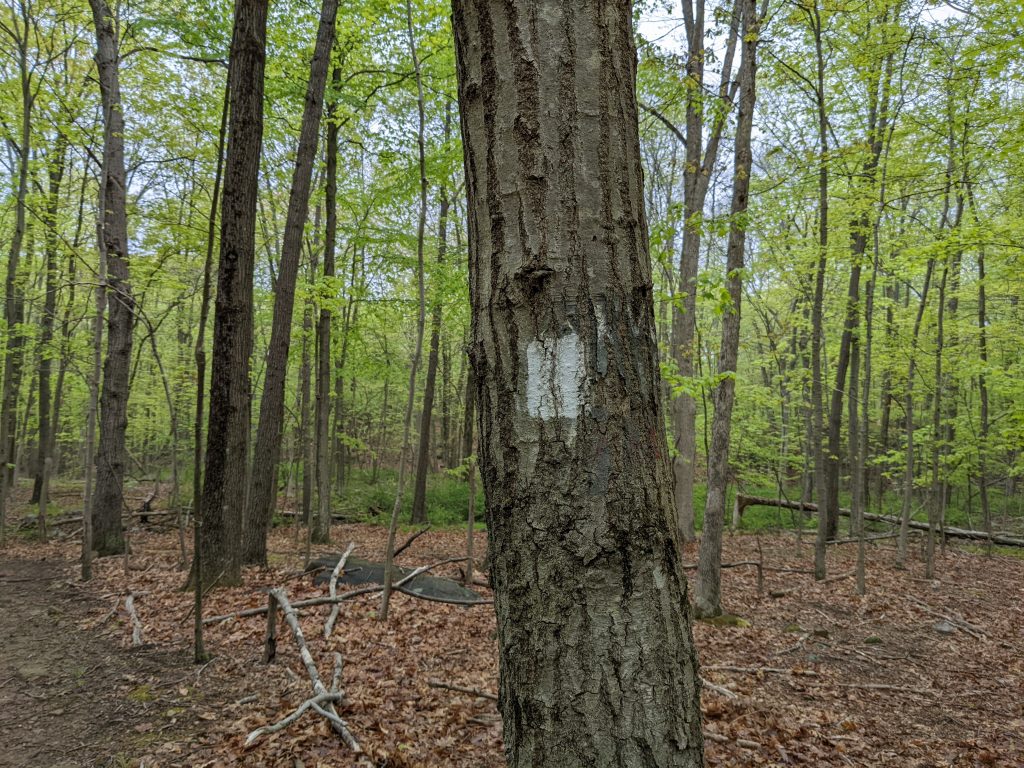 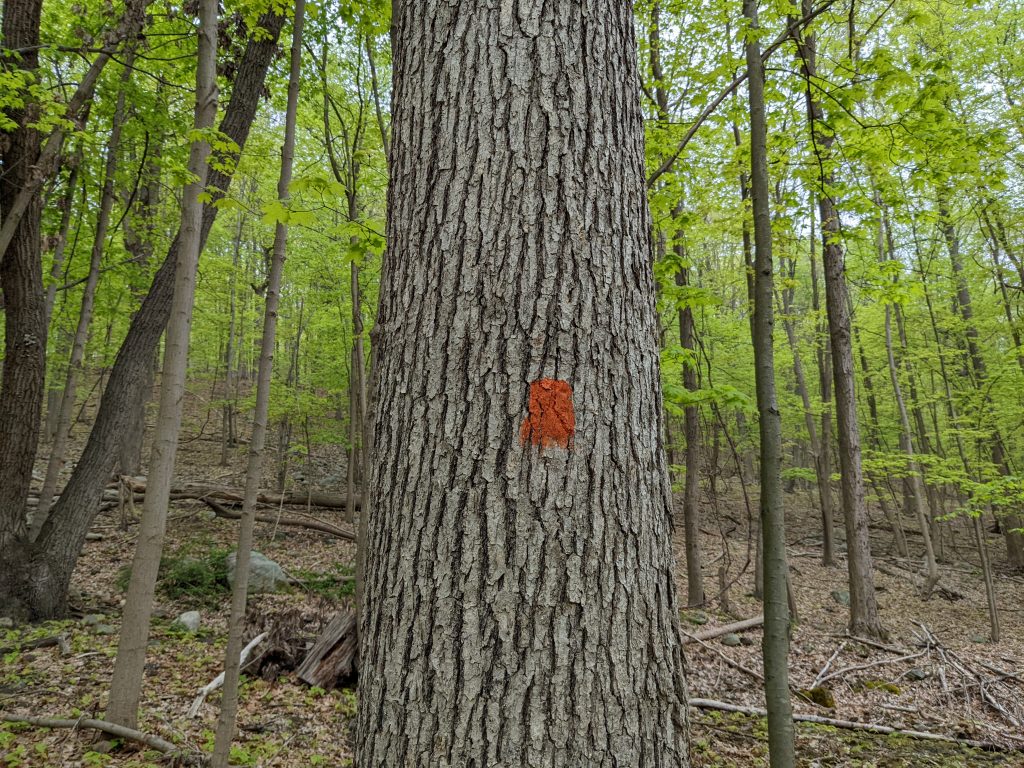 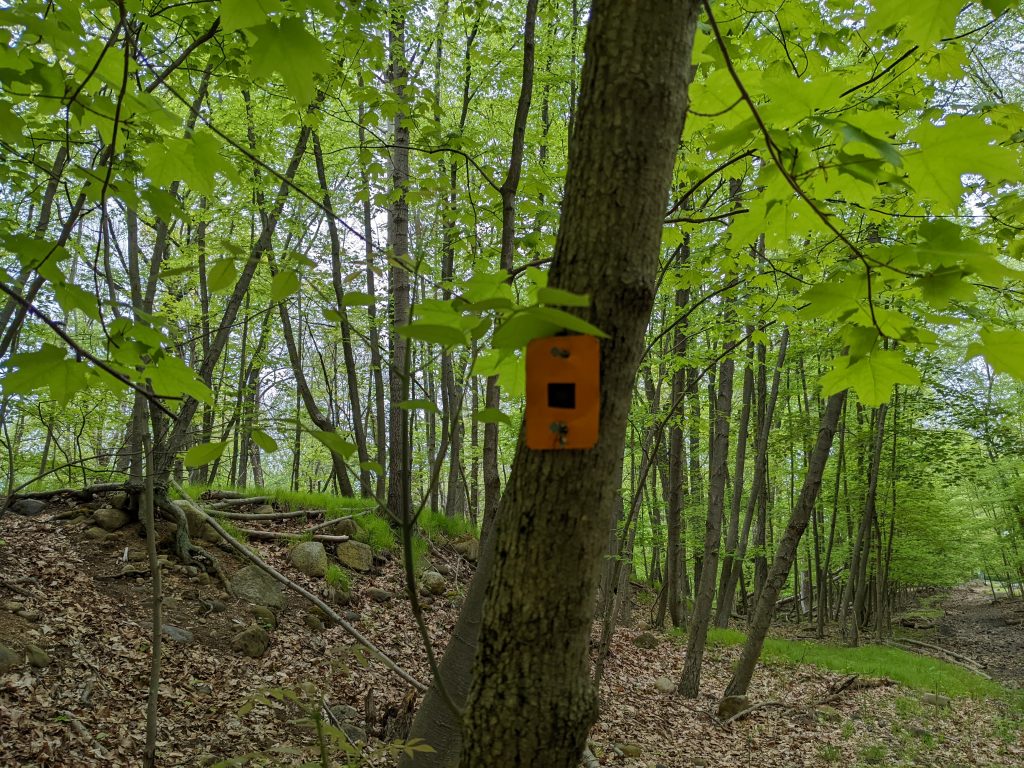 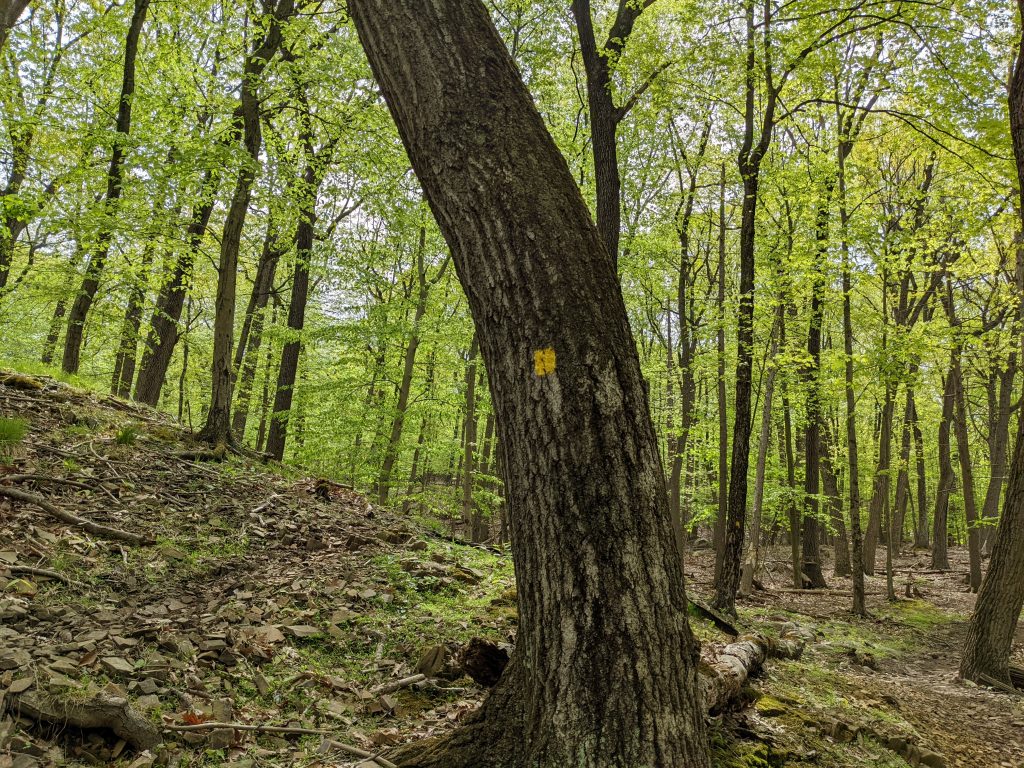