Trail Map – the park’s, I used the NY/NJ Trail conference map, and the ranger gave me one too

This was interesting.  Saturday was my only day to go out over the three day weekend.  I left the house and it was sunny.  Half way up 287 it started raining, but I figured I was prepared, I wasn’t stopping now.  It stopped raining by the time I reached the parking lot which was nice, and hopefully a promising sign.  I stopped into the visitor’s center, looked around briefly, and talked with the ranger.  She gave me (another) map.  She also said rain was coming, and showed me the radar.  It appeared that in about three hours severe storms would be moving in.  I told her I planned to go to Bare Rock Vista, then swing around to the fire tower.  She shook her head and said I wouldn’t make the fire tower with the rain coming in.  Challenge accepted.  However, with rain in the forecast, I don’t mind amending my plan as long as a) it’s a safety issue, or b) I can still get mileage in.  I don’t like driving a long time for three miles…(cough cough, Great Swamp or Storm King.)

I took off on the Sterling Lake Loop trail, which is pretty flat and wide, and ultimately goes around Sterling Lake.  And it started sprinkling.  Not far into the trail, I noticed the junction of the Lakeville Ironworks trail (yellow with a pickax) and I could see ruins.  I went about 15 yards down the trail to see the remains of the iron furnace.  I figured I would do the whole trail on my way back as that’s where the history and ruins were. 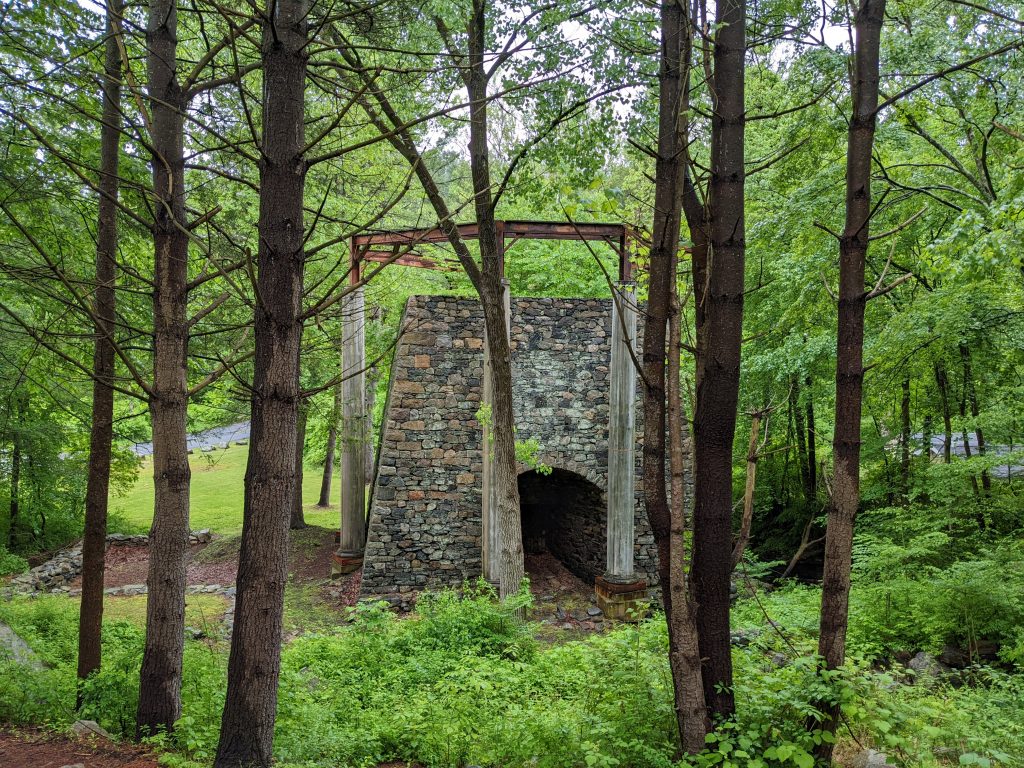 Here’s a shot of Sterling Lake, there is a trail next to the visitor’s center that heads out to the lake I planned on hiking at the end, when I got back. 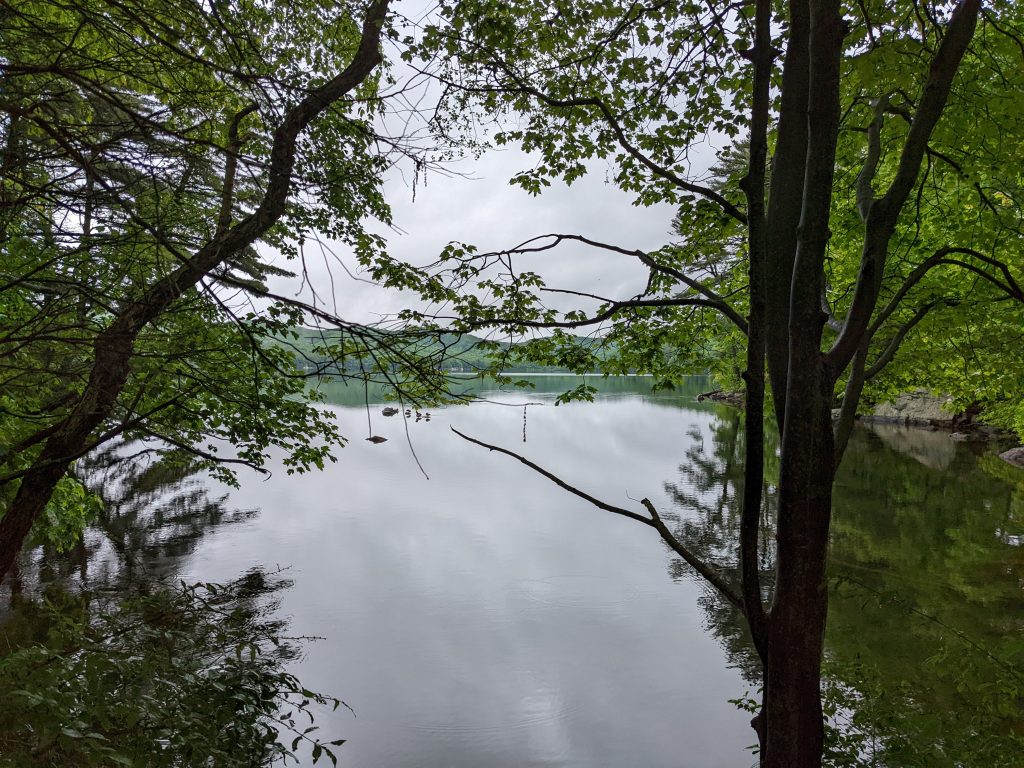 There is a small road walk on the Sterling Lake Loop, which bypasses some ruins, and the other end of the Lakeville Ironworks trail. 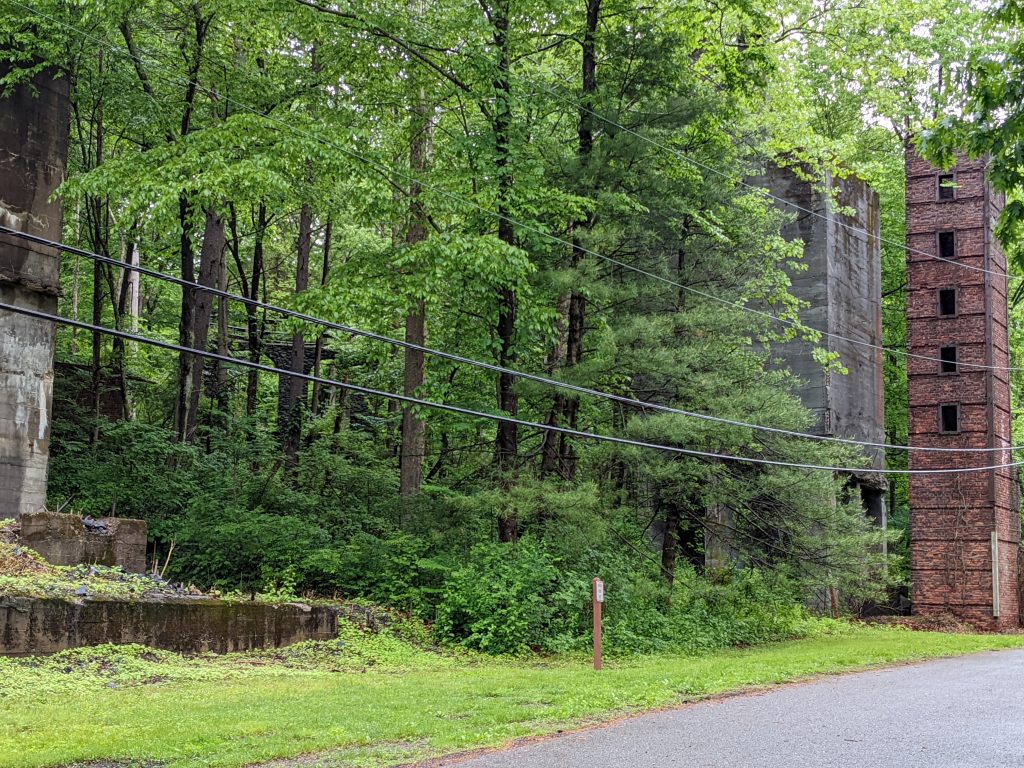 I turned onto the Bare Rock trail and headed up.  There was torrential rain the day before and you could see where the water ran downhill.  The Bare Rock trail is almost all uphill at this point, with some sections that flatten out in pine groves.

After climbing about a half hour on the Bare Rock trail, I heard what sounded like wind.  Looking up, I did not see the leaves moving…it was rain, and it sounded hard.  So, while under the pine trees I broke out the rain jacket and the pack cover.  I wasn’t going to get wet again.  It must have poured really hard.  I could hear it, but the rain wasn’t reaching me.  After a few minutes I headed off, but really didn’t get wet.  The worst part was the mosquitoes, especially in the muddy areas.  At least the jacket covered my arms. 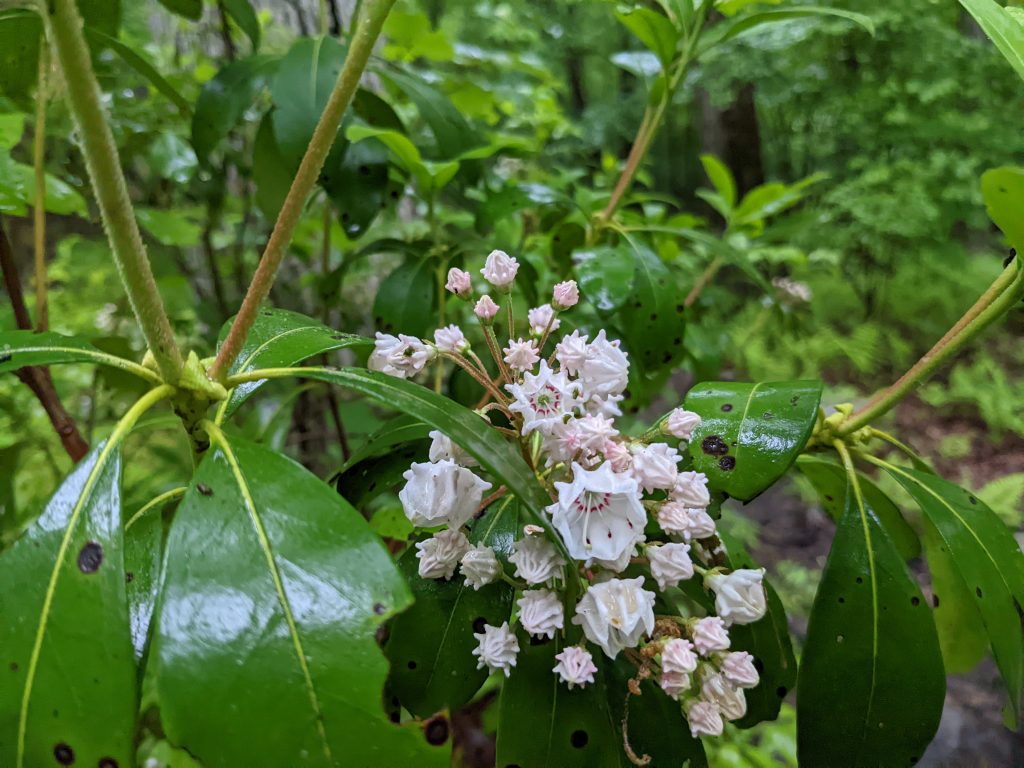 Eventually, I came to the spur trail to Bare Rock Vista, which has a gorgeous overlook of Greenwood Lake.  Take these next three pictures and stitch them one next to the other. 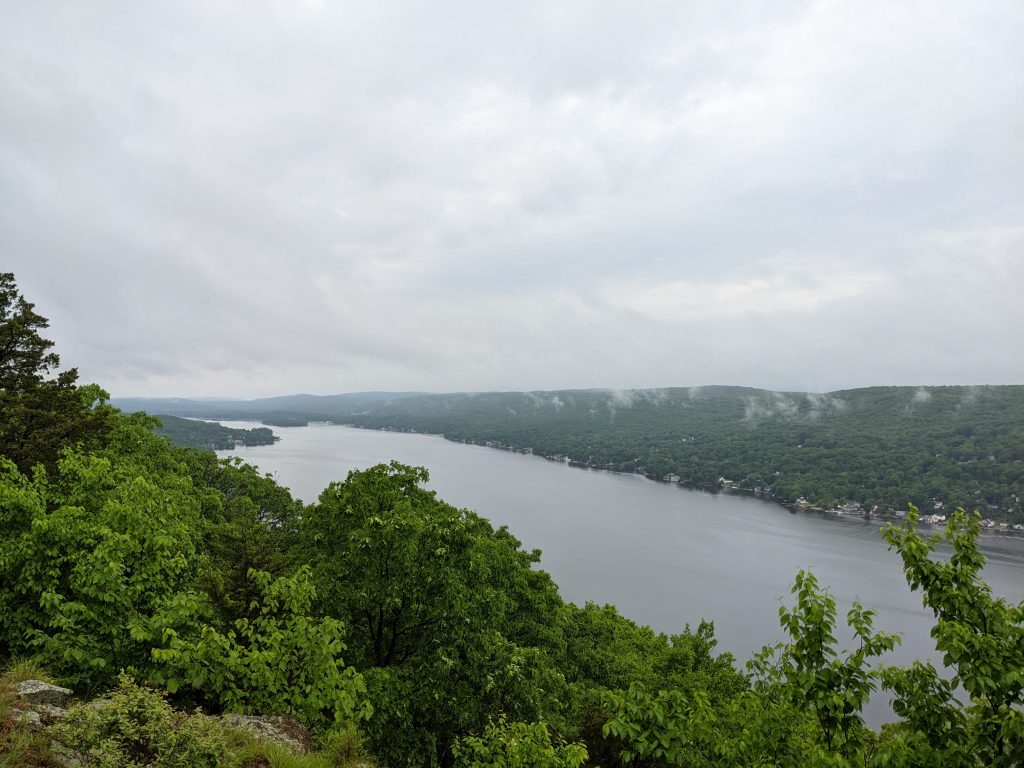 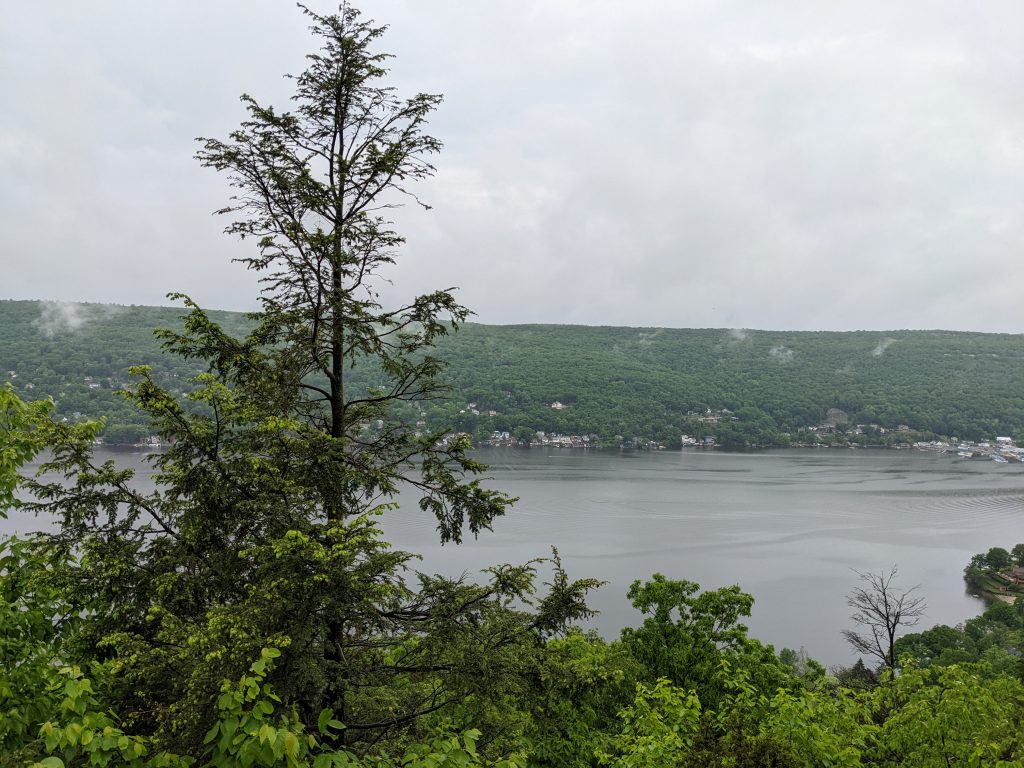 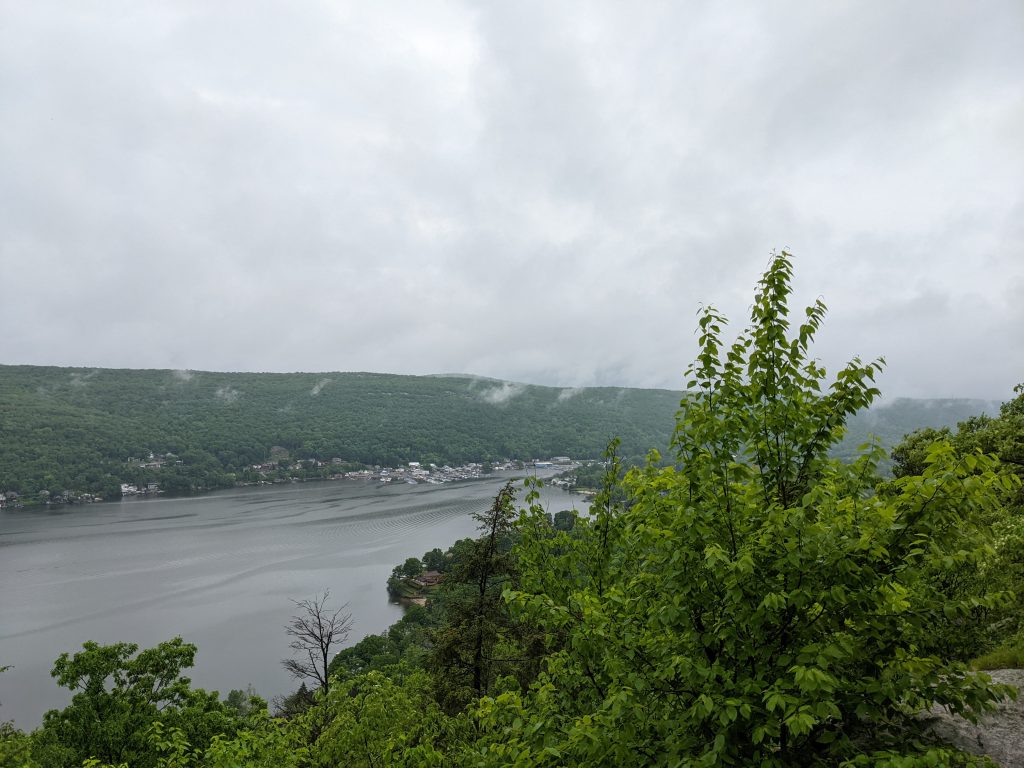 On the way back down it got real dark.  I tried to take a picture while in a pine grove, but the picture doesn’t really do it justice.  I seriously contemplated getting out my headlamp. 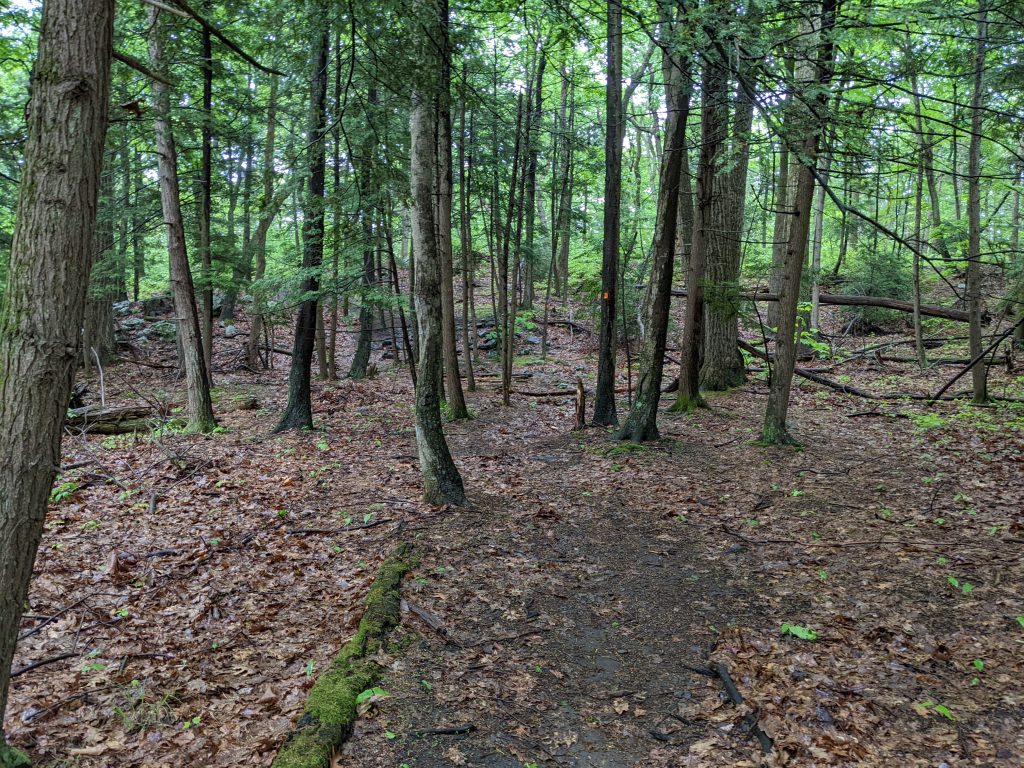 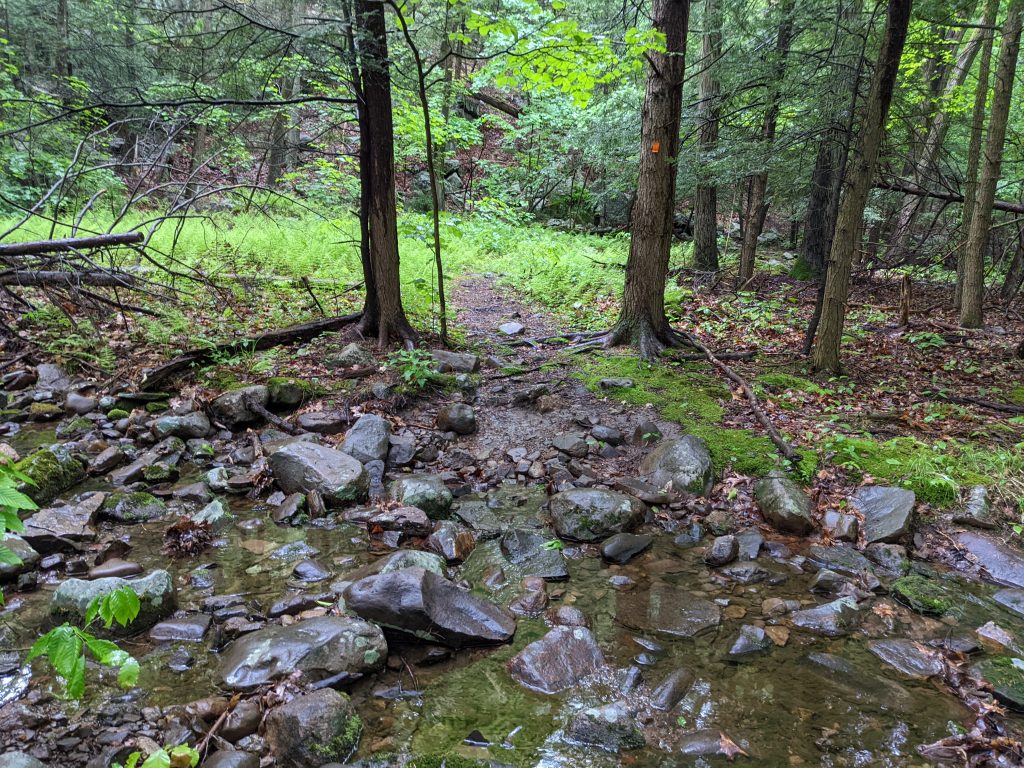 I got to the junction of the Sterling Ridge / Highlands Trail which I had passed on the way up.  The skies looked to be lightening a bit.  The ranger had said I would never make the fire tower with the rain coming in, but I looked, and it was less than a mile to the tower, then about a mile and change back to the visitor center.  I risked it.

As I started off, the rain seemed to be pushing off.  There’s a nice viewpoint overlooking Sterling Lake. 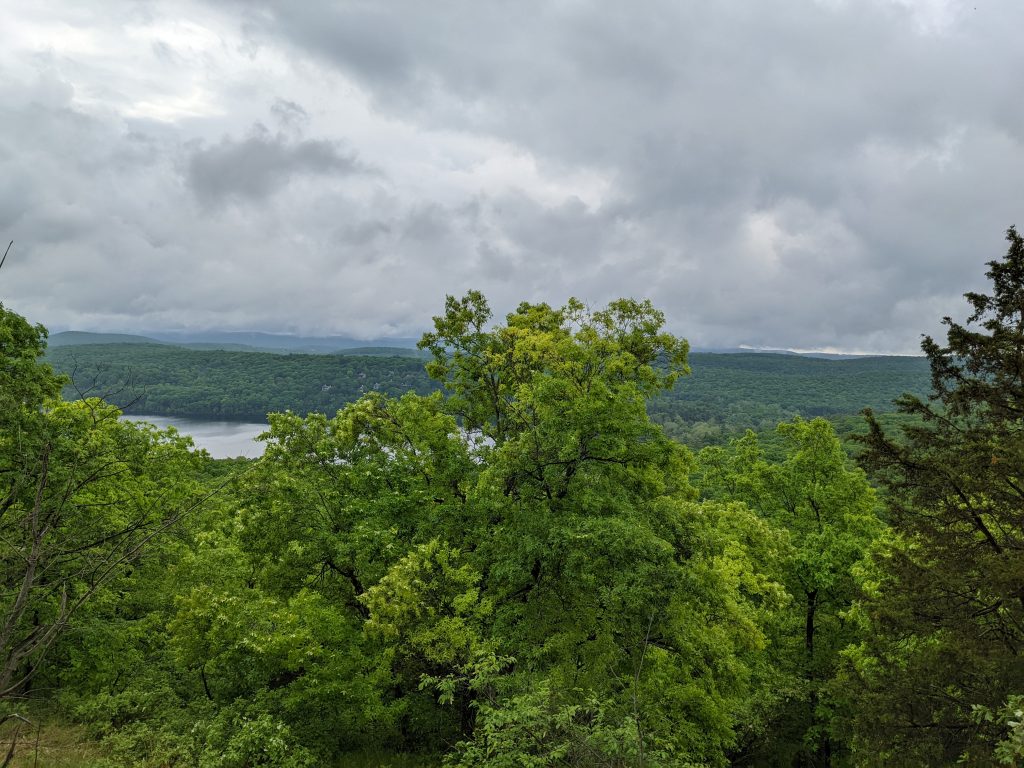 I went over something large, it wasn’t named on the map.  At the top was a grove of Pink Lady Slippers. 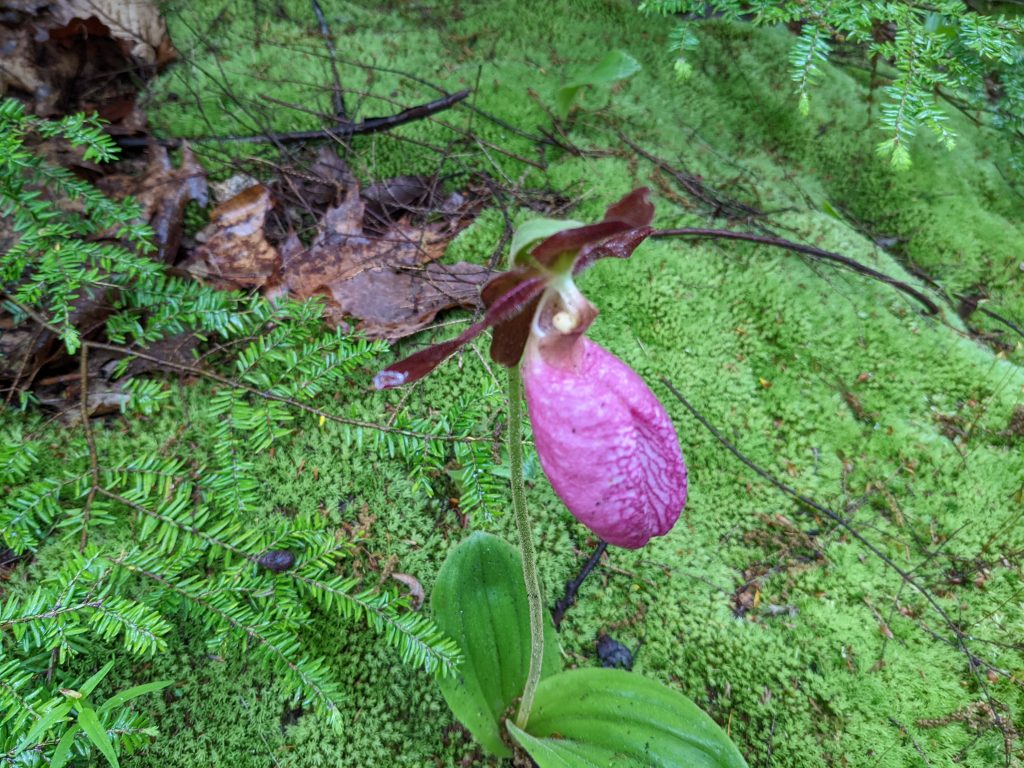 After seeing the flowers, I could start to see shadows; the sun was coming out.  Just barely.  I reached the fire tower shortly and grabbed some evidence for the ranger. 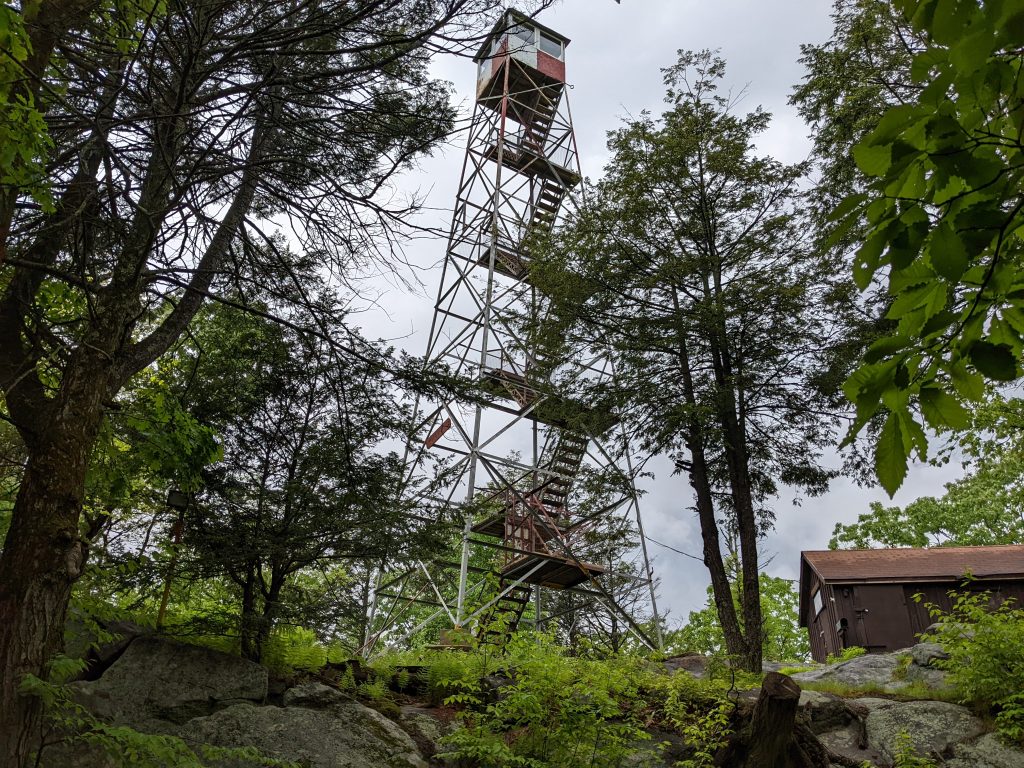 It was closed.  I wouldn’t have climbed it anyway.

On to my last two trails to the bottom.  Along the Fire Tower trail I started to run into a couple of small groups of hikers and thought, they were heading up at the right time….nice sun, the breeze was picking up pushing away the mosquitoes.

However, as I reached the Sterling Lake Loop trail, I decided to forgo the Lakeville Ironworks trail – there were just too many mosquitoes and I had had enough.  As I reached the Visitor Center, it was starting to rain, so I decided against the short trail to the lake.  As I got to my car, the rain was picking up.  And when I shut the car door to sit and have lunch, it absolutely poured.  I could barely see off the front of my car.  Had I decided on either of those two trails, I would have been (more) soaked.  And I thought of those people I saw on my way down that were just heading up.

As I drove home I saw massive lightning before I finally drove out of the storm.

I really liked Sterling Forest.  I will definitely go back as there are whole sections to hike.  I could re-do this hike too, as I’m sure it is even nicer without the rain. 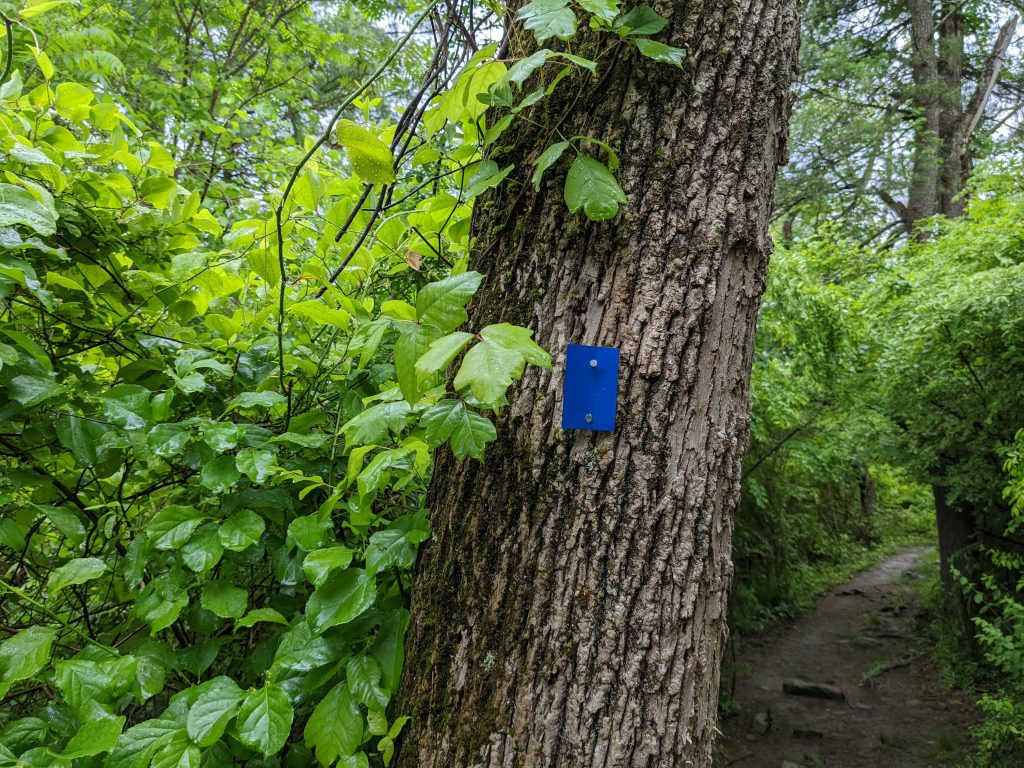 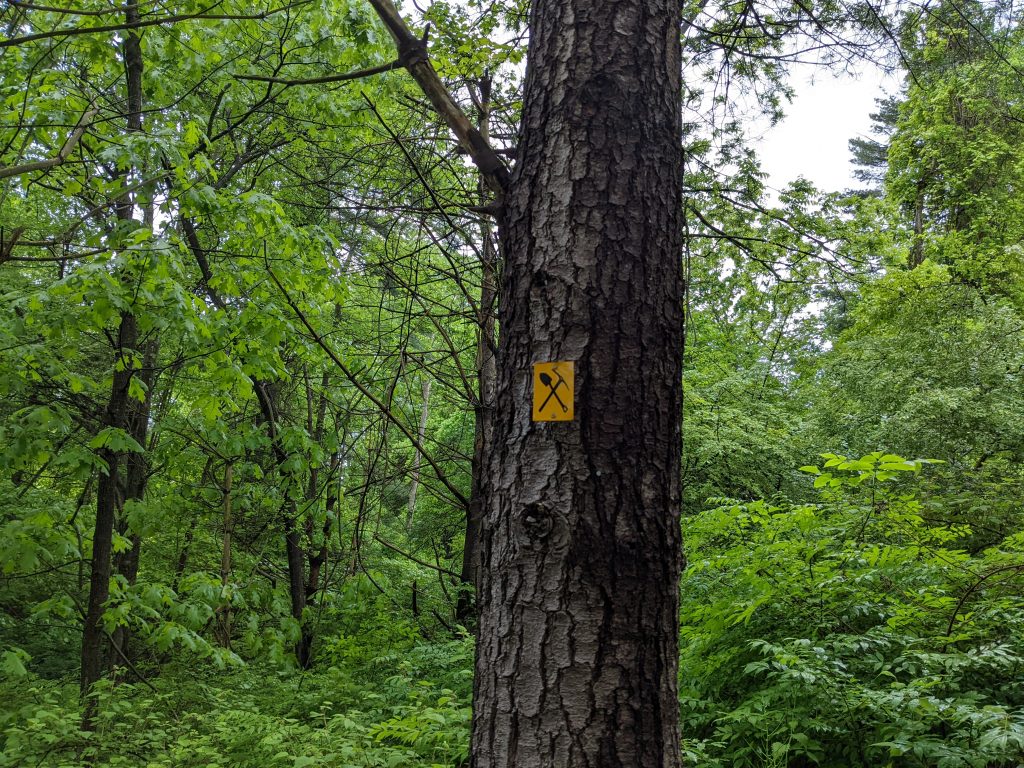 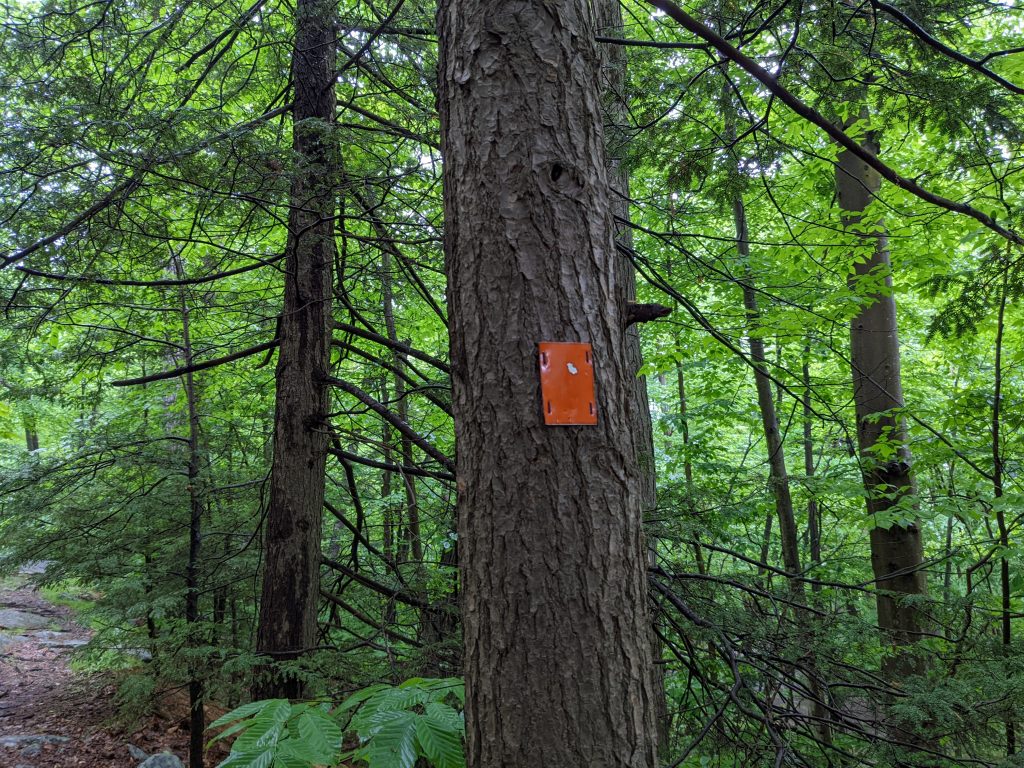 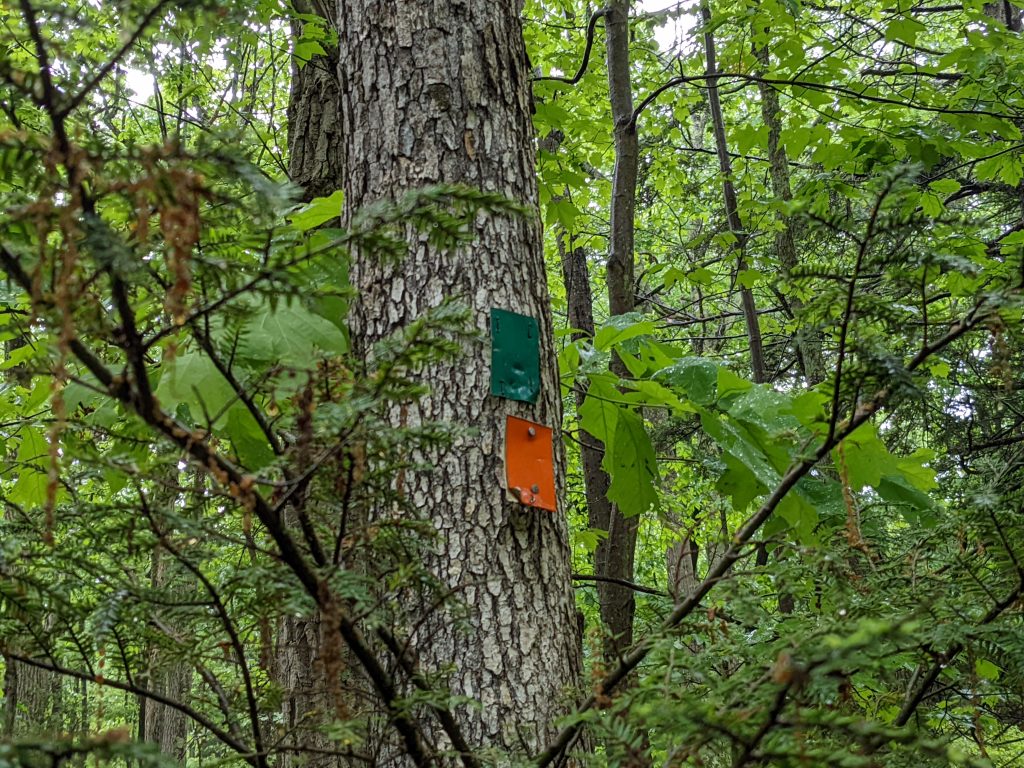 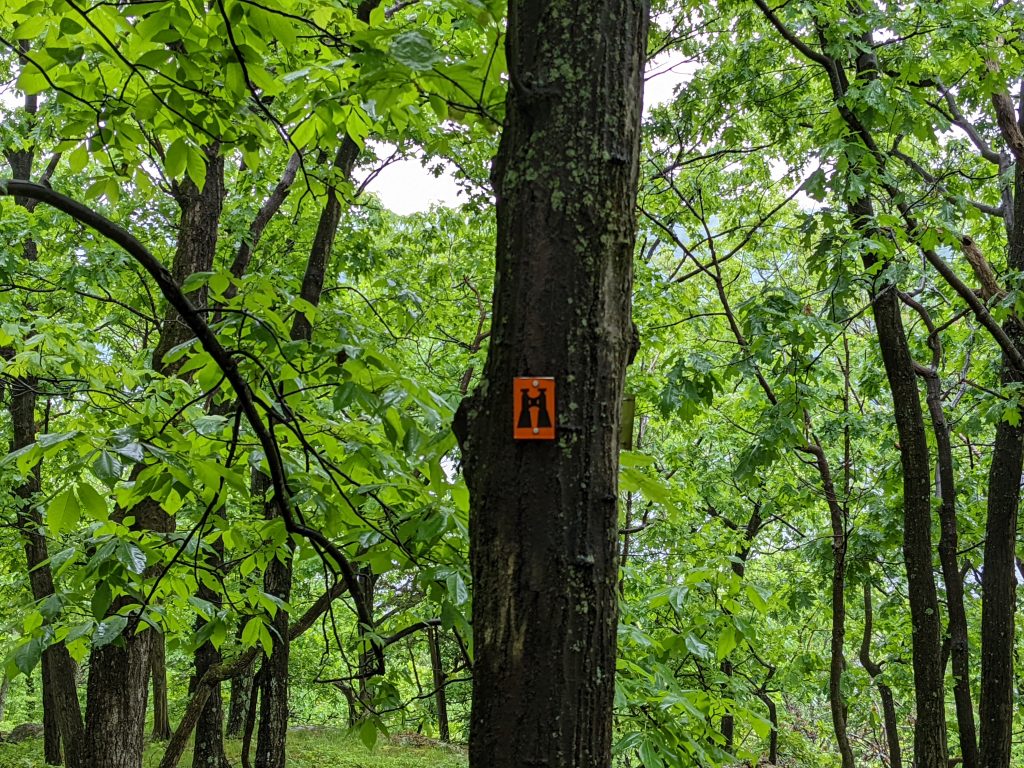 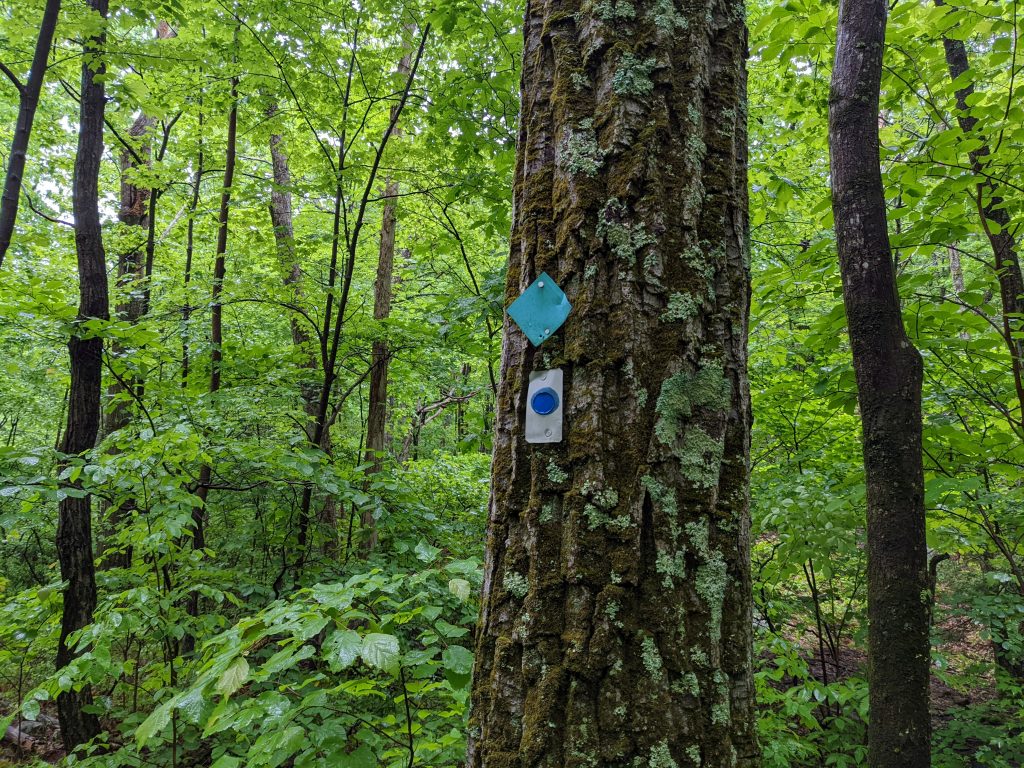 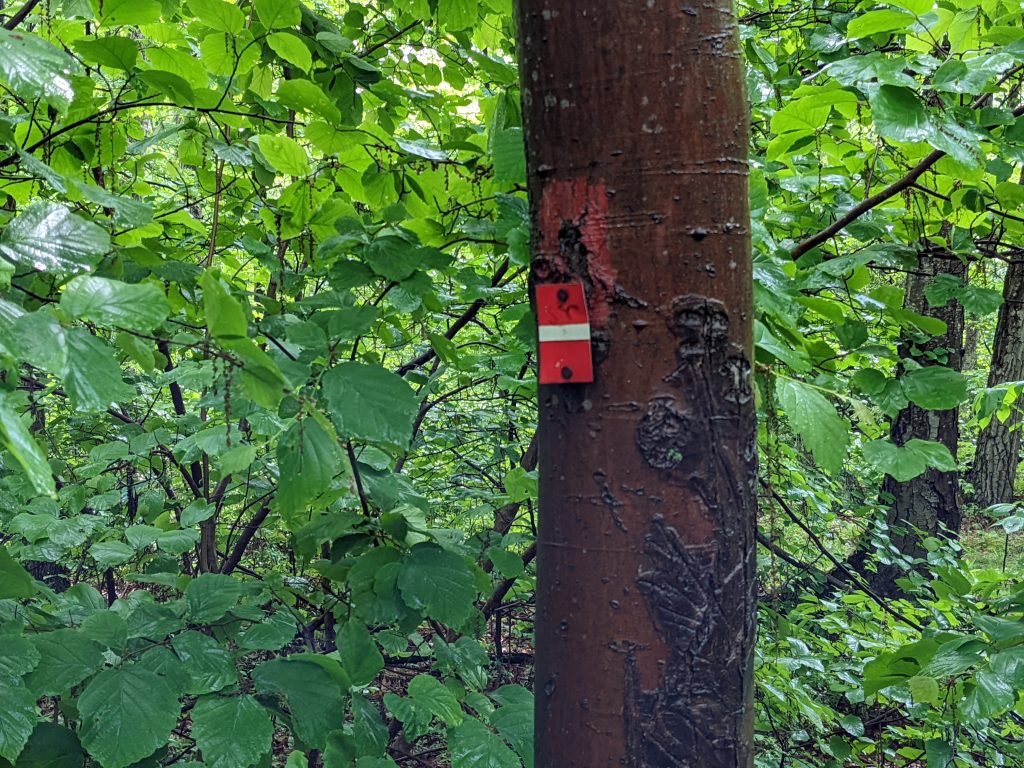 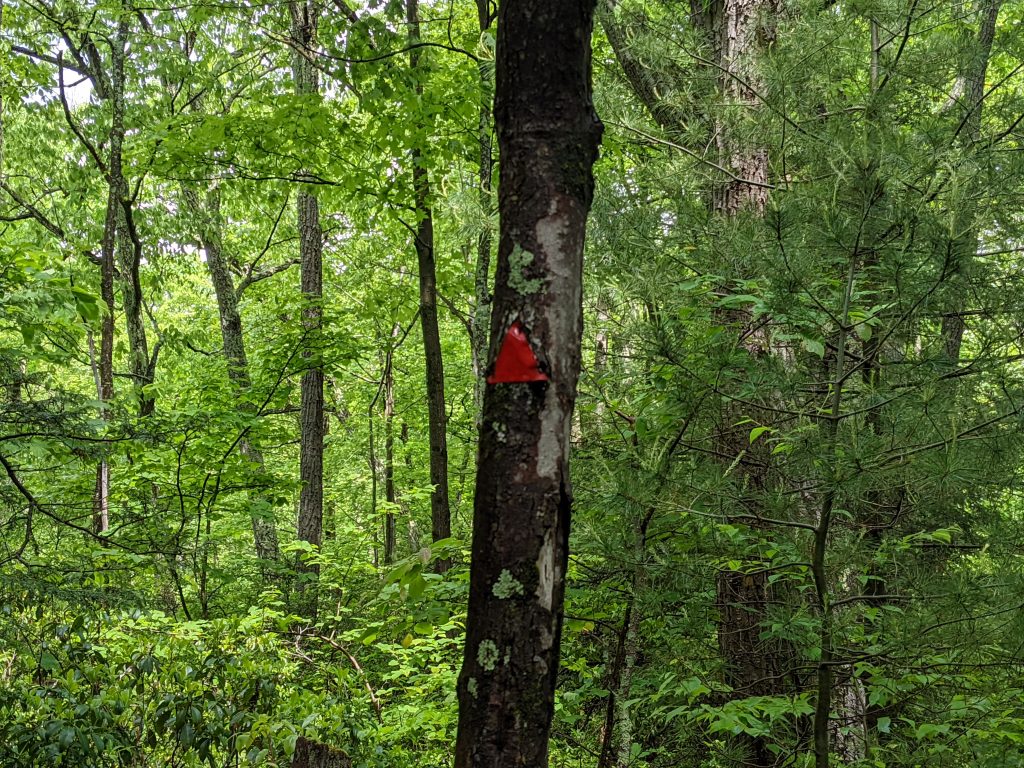