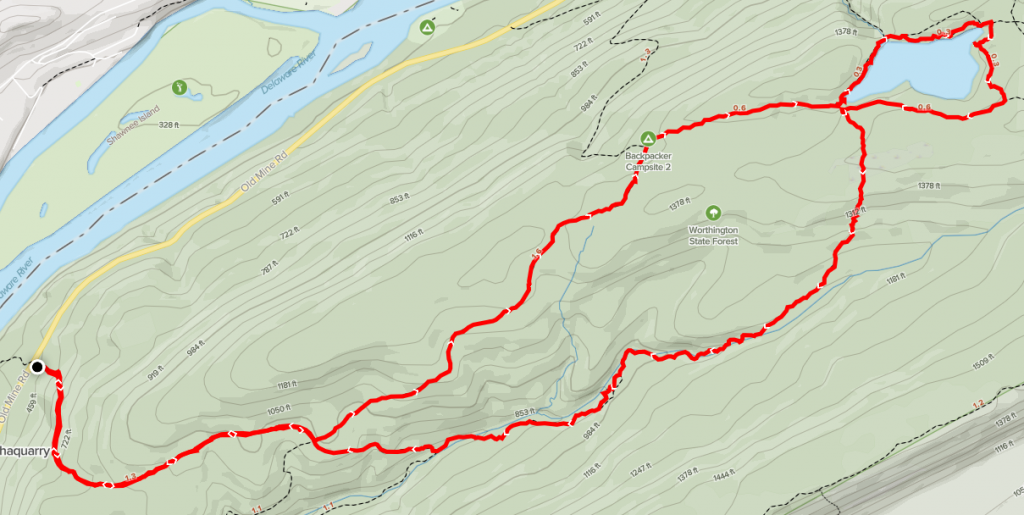 For those wondering, this isn’t the typical Sunfish Pond loop.  That loop starts at the Dunnfield Creek lot, and uses the full sections of the Appalachian Trail and Dunnfield Creek trail (and may be a tad longer too.)  I wanted to stay away from the circus of people and chose to head to the Fairview lot off of Old Mine Road.  When I pulled in around 8:20, I was the second car in the lot, and the first left while I was lacing up my boots.  When I drove by the two hiker lots (of which one is the Dunnfield Creek lot) they were already mostly full.  When I finished my hike, there was one other car in the lot.  That’s not to say I didn’t see people; I saw a bunch of thru-hikers on the AT.  But I “missed out” on the huge crowds at Mt. Tammany.

When I arrived at the Gap, there were lots of low clouds.  Fortunately, once the sun came out it burned off all the clouds and became a great day.  I thoroughly enjoyed the Fairview trail, though coming back I did not get to hike the whole Dunnfield Creek trail – and that’s a trail I really like.

Starting up the Fairview trail, the trail is nice and wide.  At this time of year, there is lots of green,with ferns out all over the place. 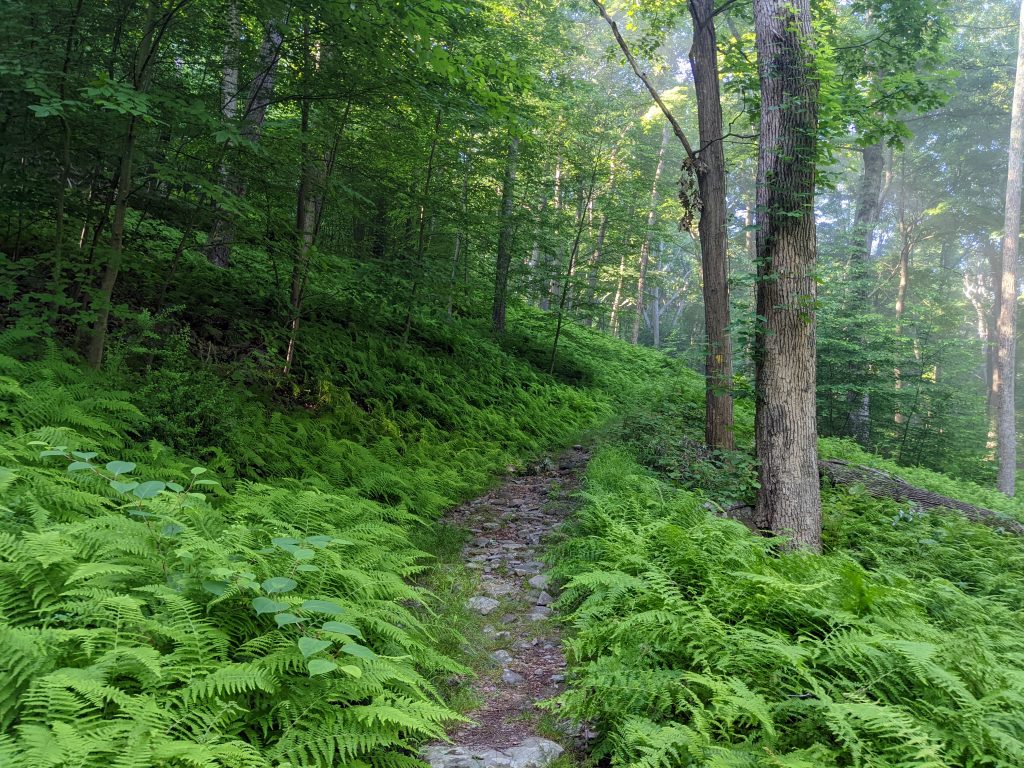 The sun burned off the clouds early. 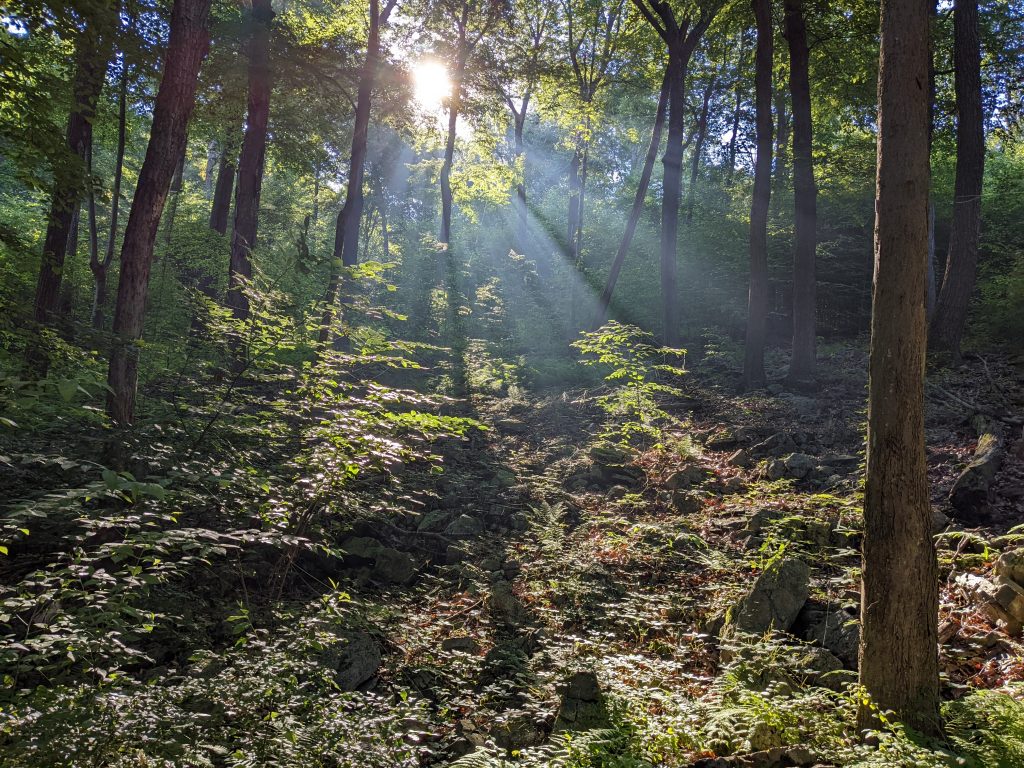 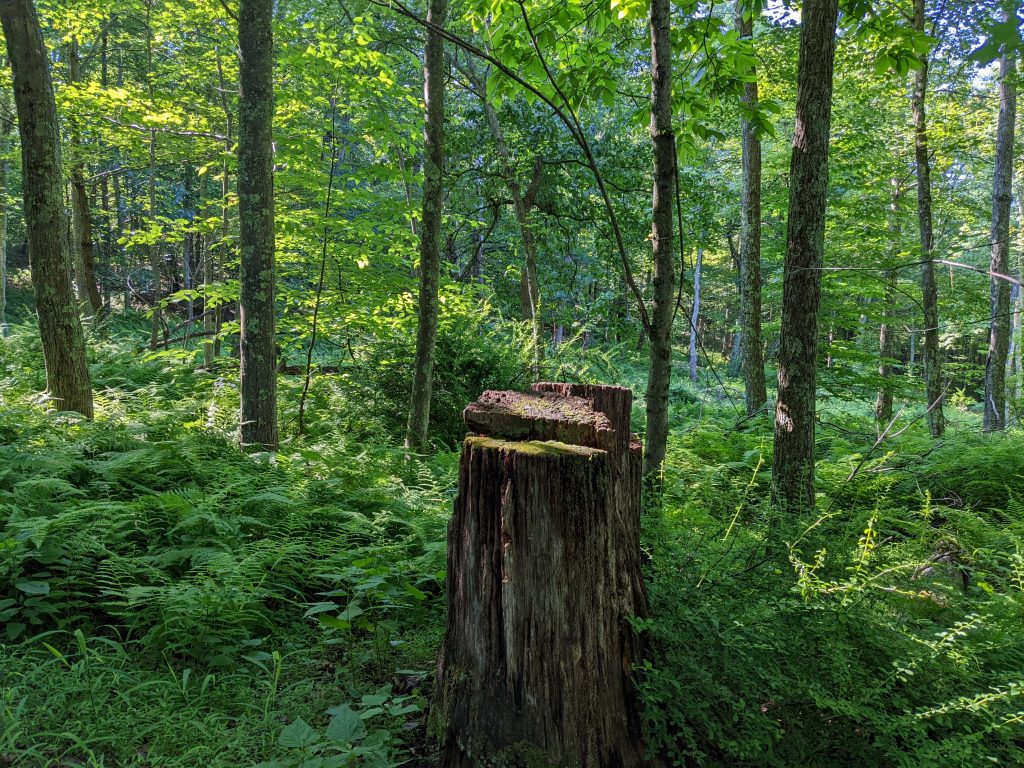 I passed a couple of spots with bear droppings, one really fresh.  But alas, no bear sightings today.

I quickly came to the junction with the Appalachian Trail, and found this marking on the ground.  1300.  I’m assuming miles, but I don’t know from which end. 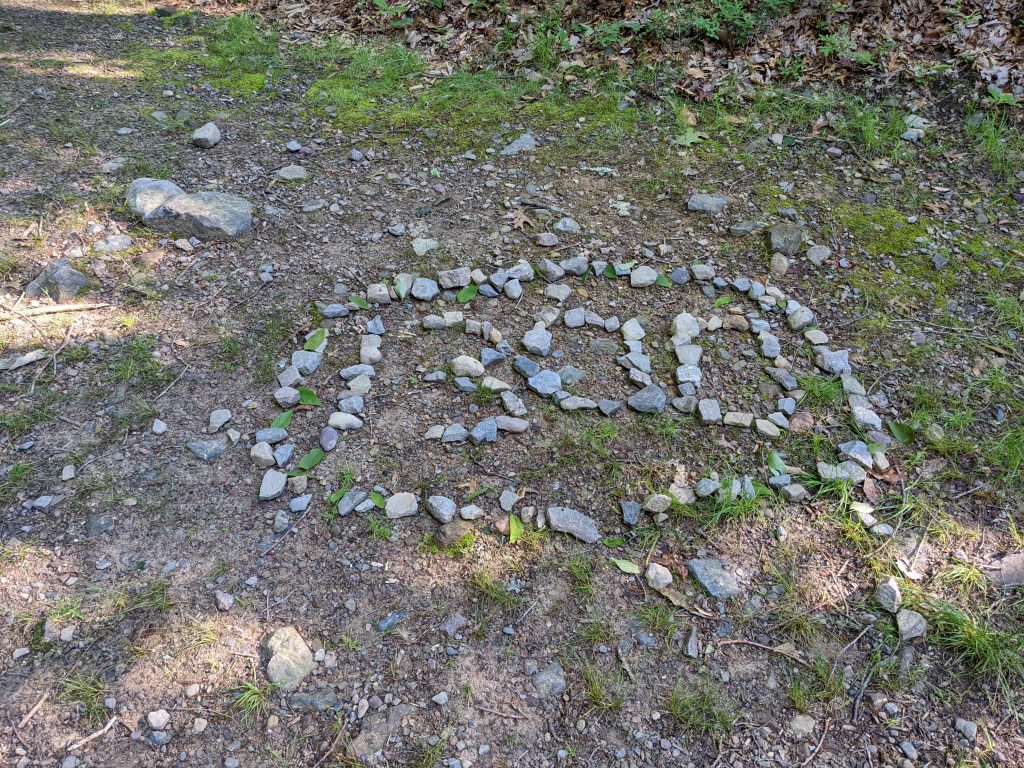 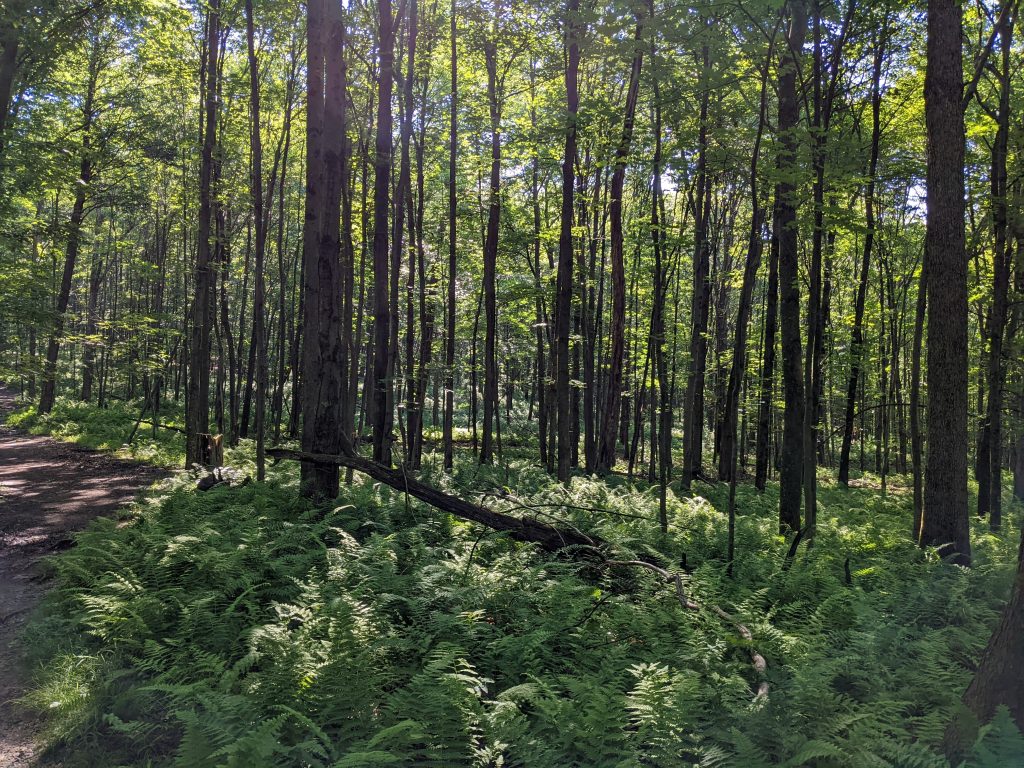 The trails seemed damp, as if it had rained the night before.  I don’t recall getting rain the day before.  However, the mushrooms were out. 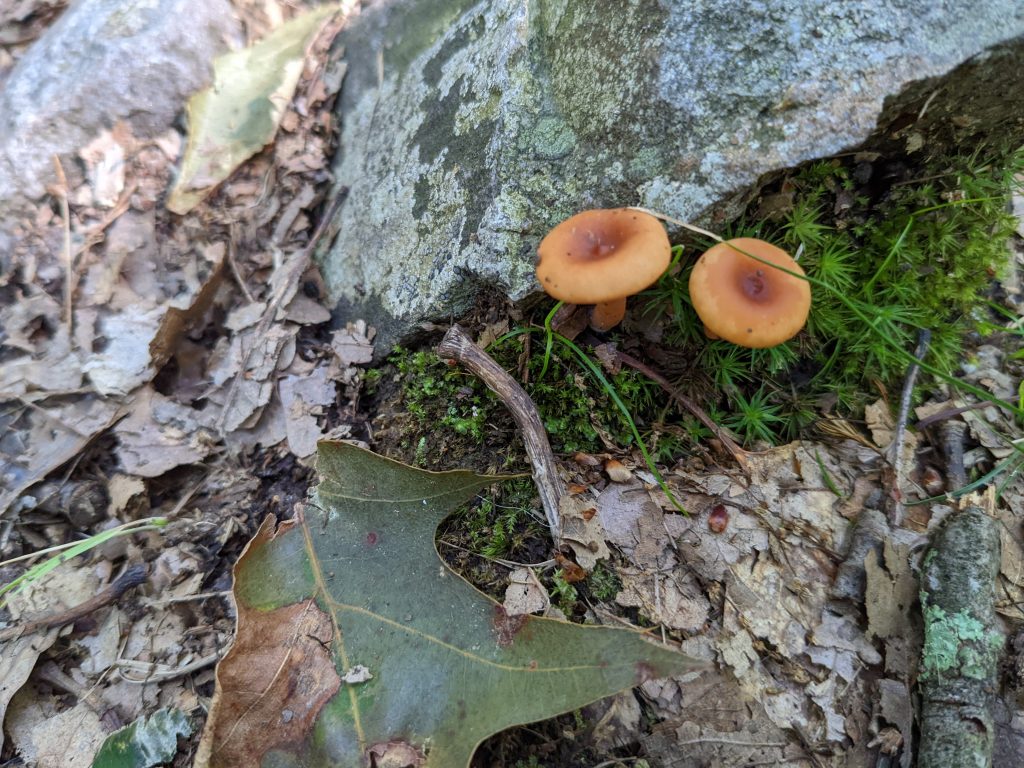 In case you have forgotten, or just don’t know what the AT is like in New Jersey…here is a typical section: 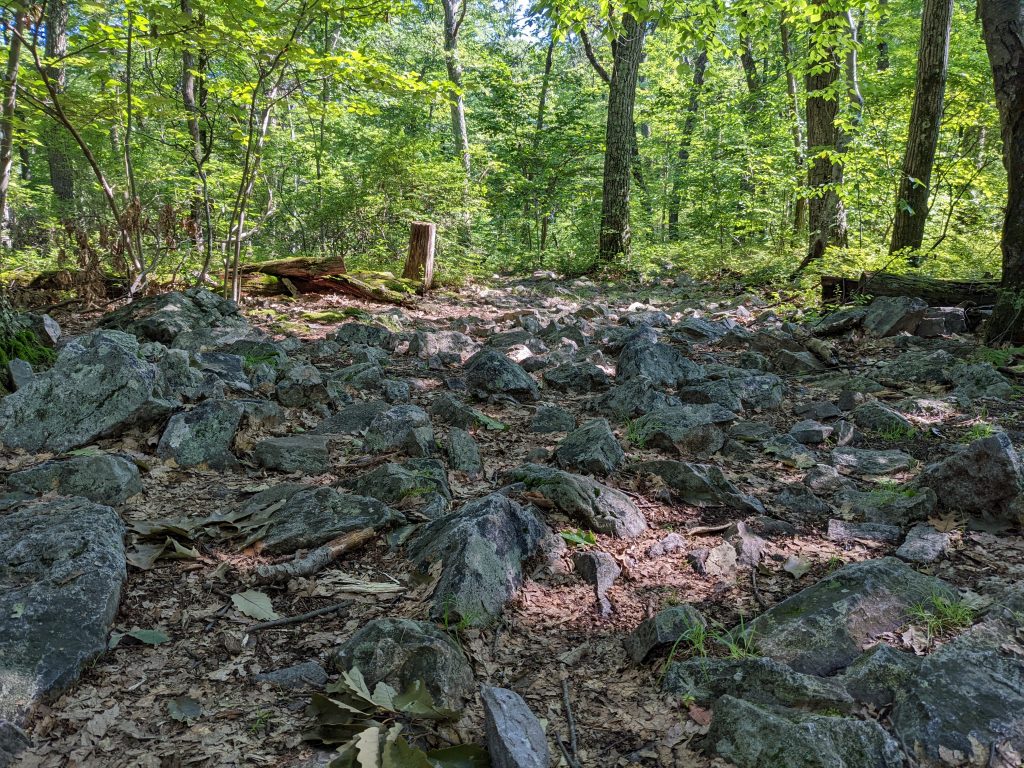 After stopping at the backpacker campsite to check things out, I quickly made it to Sunfish Pond.  I had hiked this route close to 40 years ago, and I just don’t remember Sunfish Pond at all.  On this day, it was gorgeous.  The only sound were the frogs, and there were plenty.  Here is Sunfish Pond, looking East. 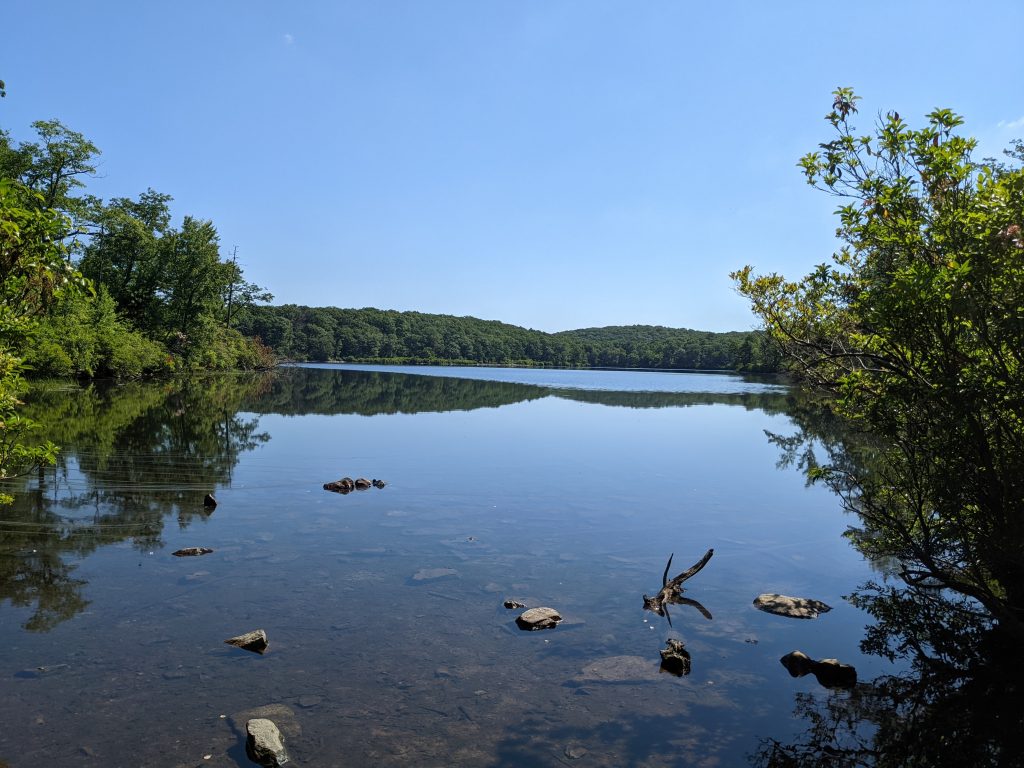 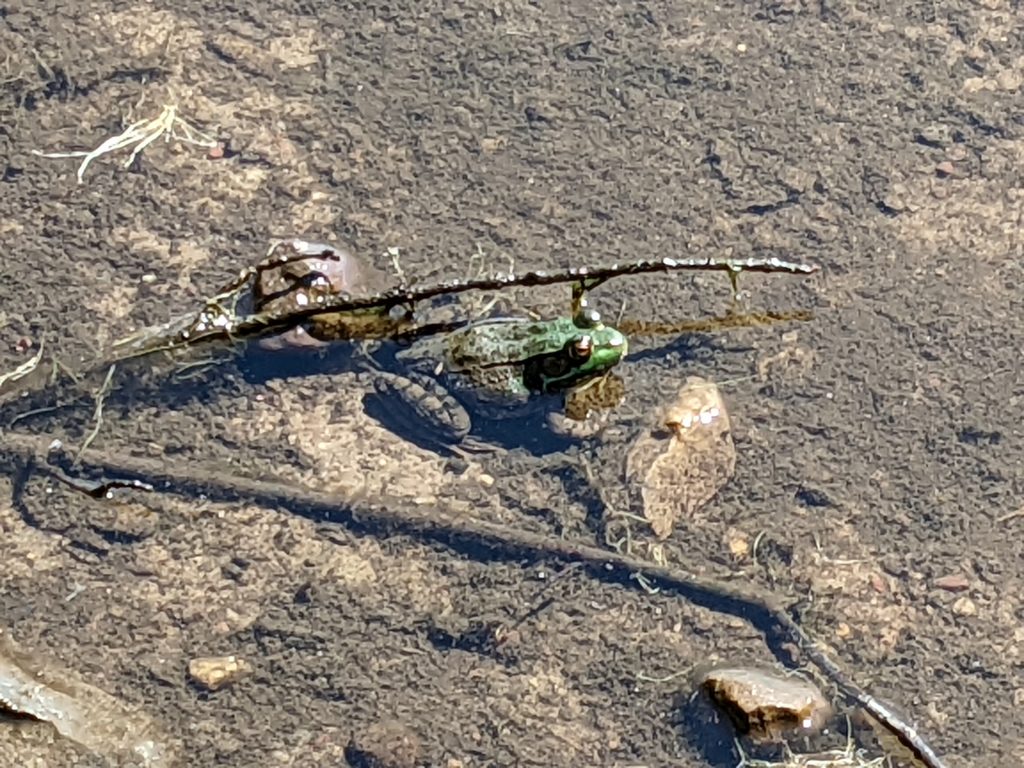 I followed the Appalachian Trail along the northern edge – be advised there’s a small amount of rock scrambling at water’s edge.  I took the Buckwood trail to continue going around the pond, as the AT heads north towards Raccoon Ridge.  There is an overlook on the Buckwood trail that is (in my opinion) one of the best views of Sunfish Pond.  It looks west, back from where I came. 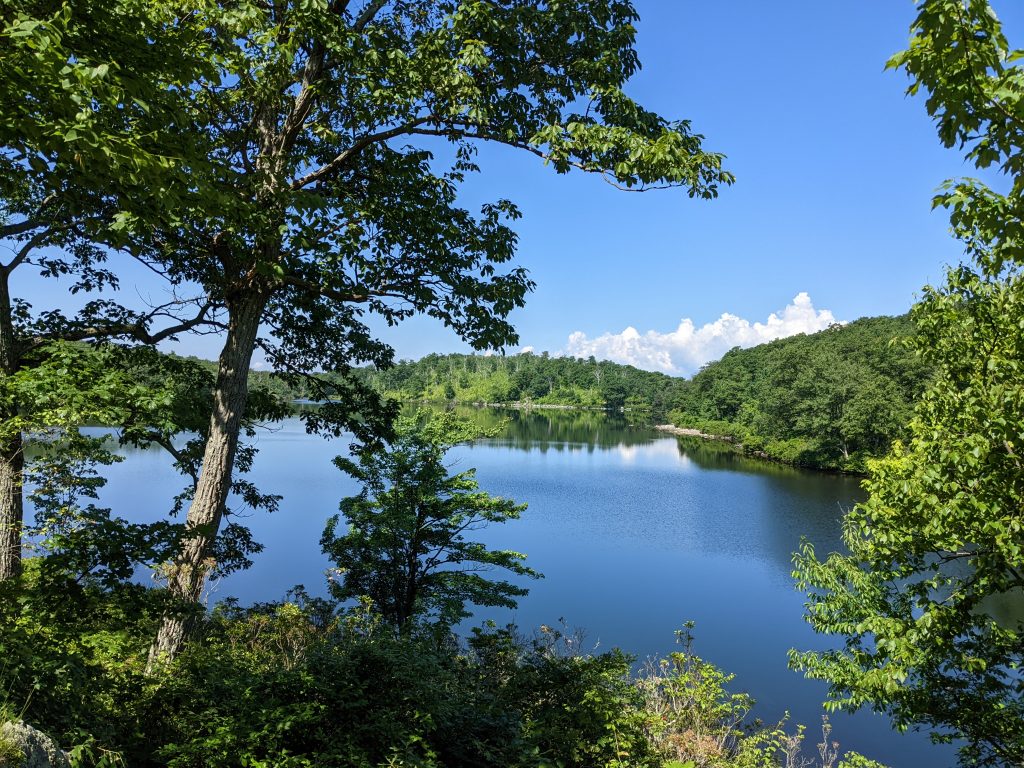 Those clouds in the distance did start to build, but by the time I left the park, nothing had happened.

I was worried about what the Sunfish Fire Road would look like, as it is not “blazed” and that was my connection to the Dunnfield Creek Trail.  I needn’t worried, it was not only pretty obvious, but signed.  Further, the fire road is wide and pleasant to walk. 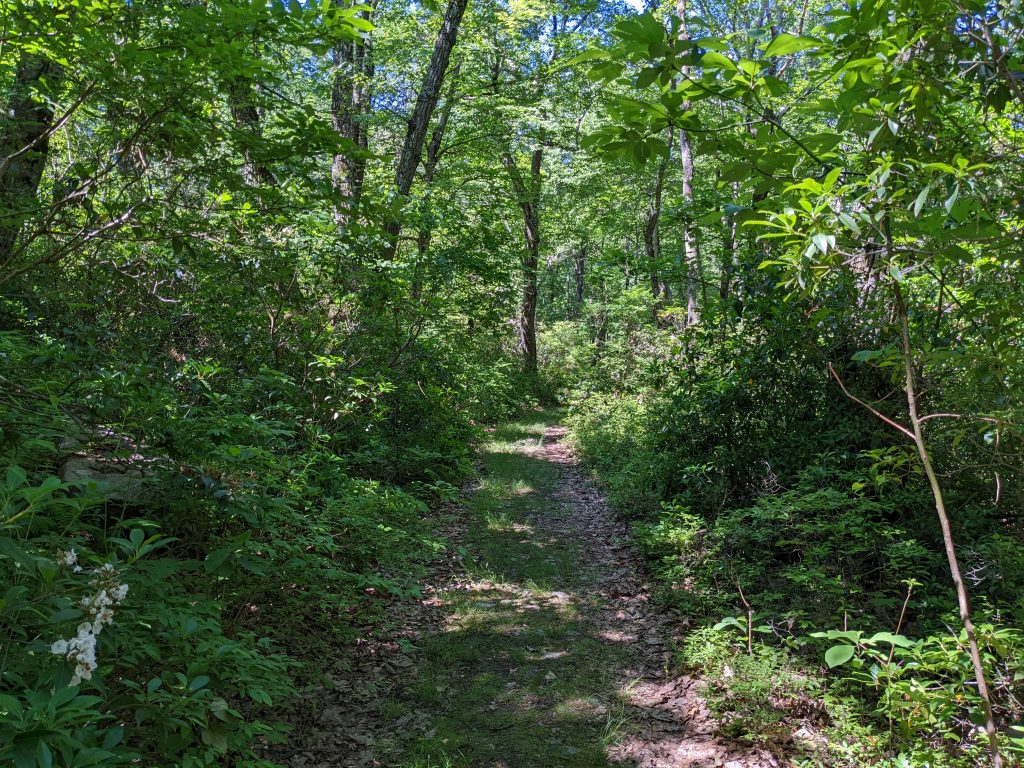 The junction with the Dunnfield Creek trail leads uphill, to the point of my highest elevation.  And I’m glad I did the hike in the direction I did, as I would not have wanted to climb that hill with all the rocks.  Going down was tough enough.  I like the Dunnfield Creek trail, especially when it joins Dunnfield Creek.  Be advised that there are a handful of stream crossings; all pretty easy as I had rocks sticking up above water.  It could be a different story with higher water.

I almost stepped on this guy. 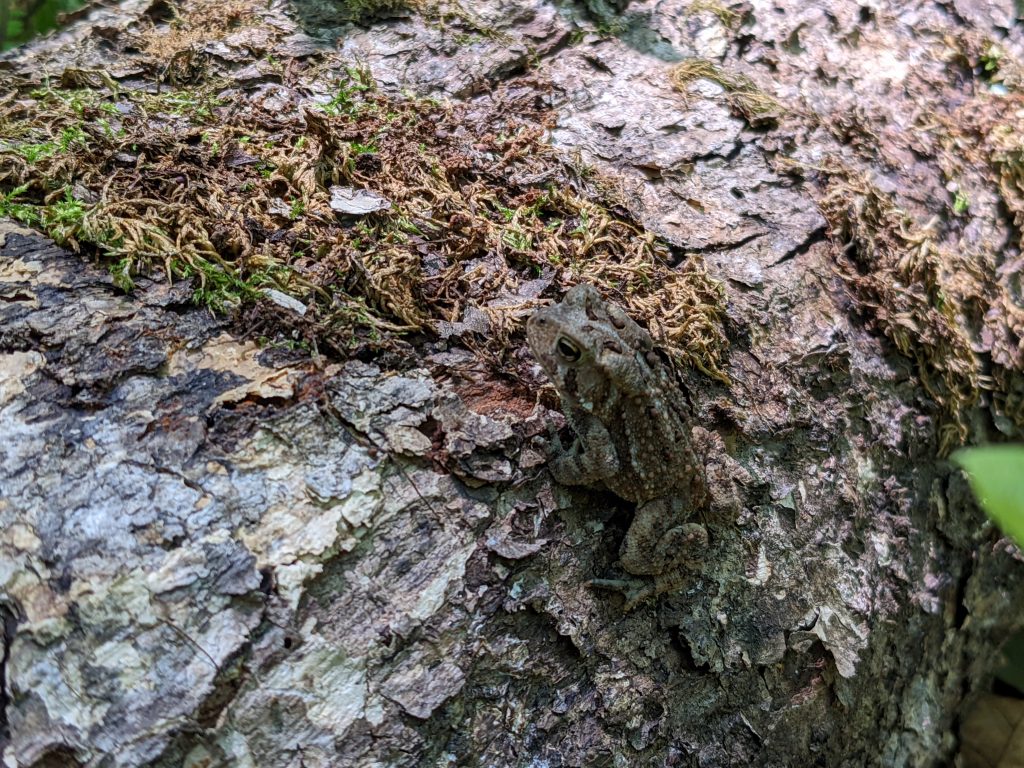 Mountain Laurel was still blooming; in some spots more than others. 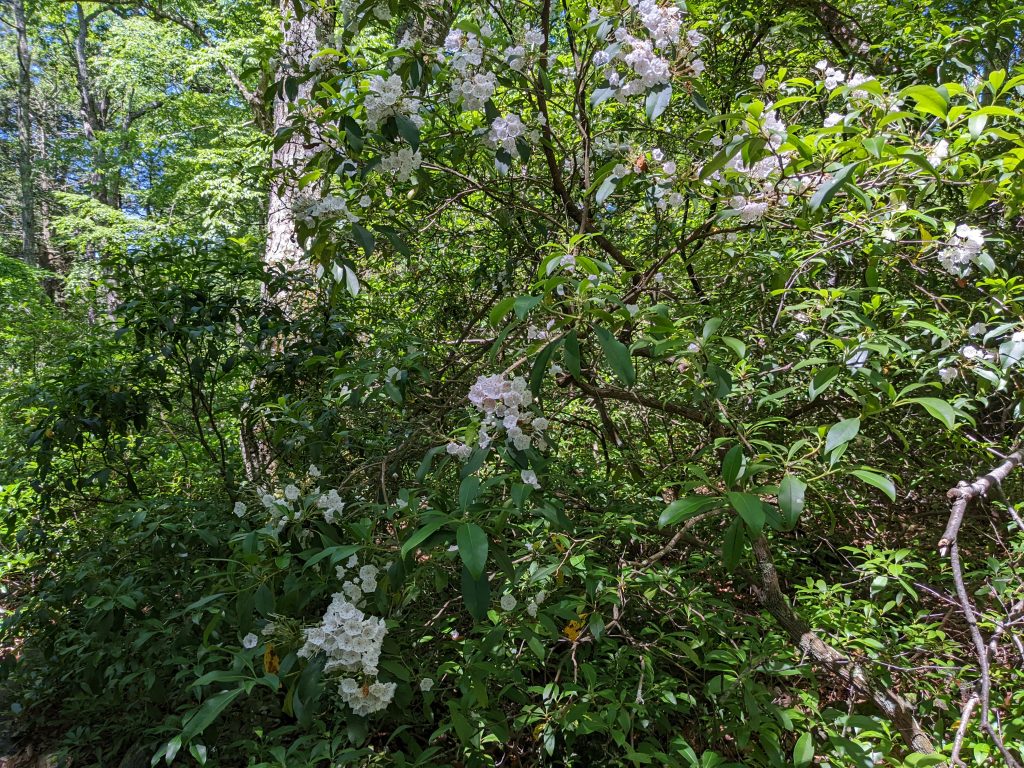 All in all, this was a great hike.  It was hot, the car said 84 when I returned to it.  And it was a little muggy.  I’m glad I chose the Fairview lot (and trail) as the Dunnfield Creek lots were jammed when I returned, I assume cars were in the overflow lot on the other side of Route 80. 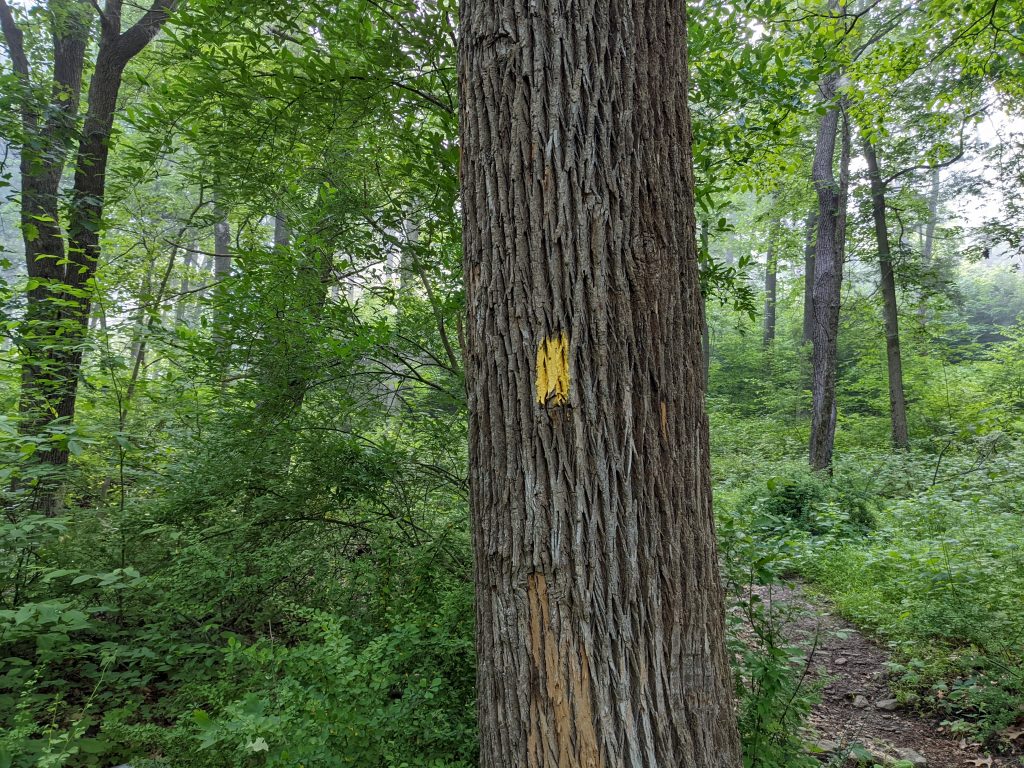 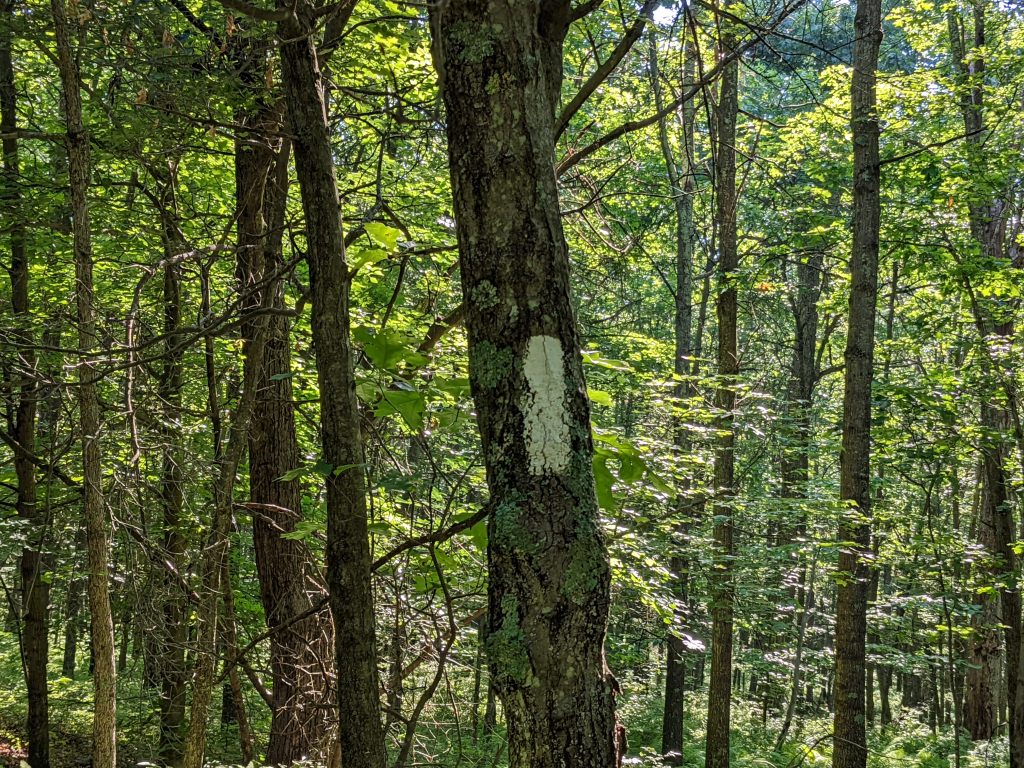 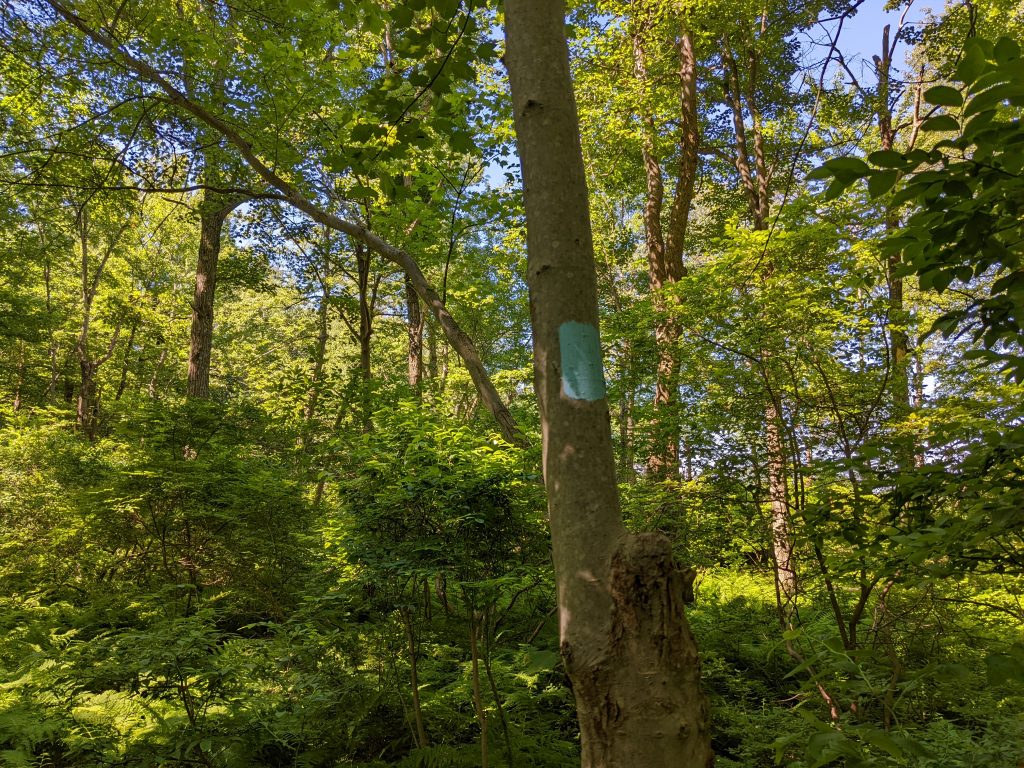 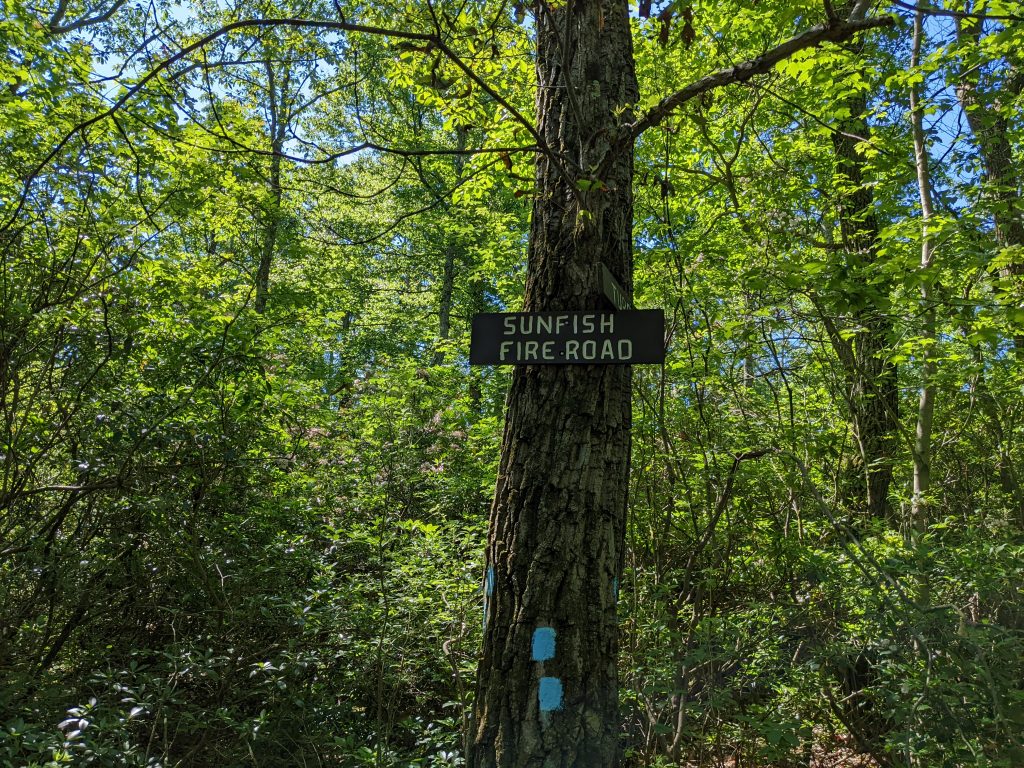 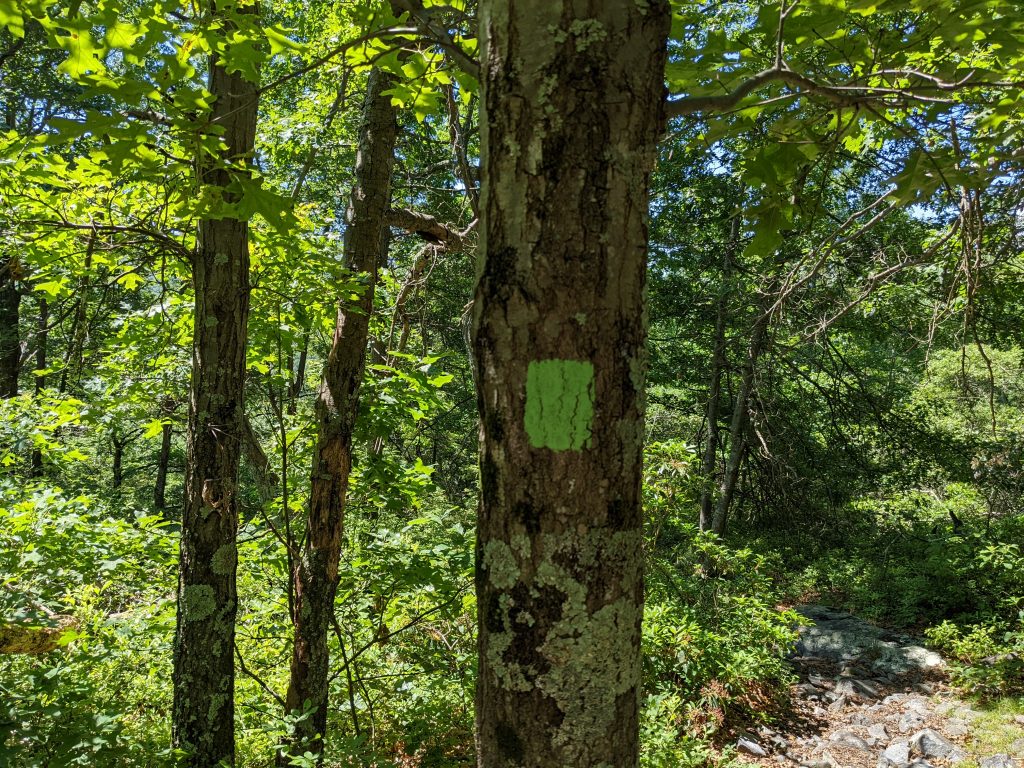 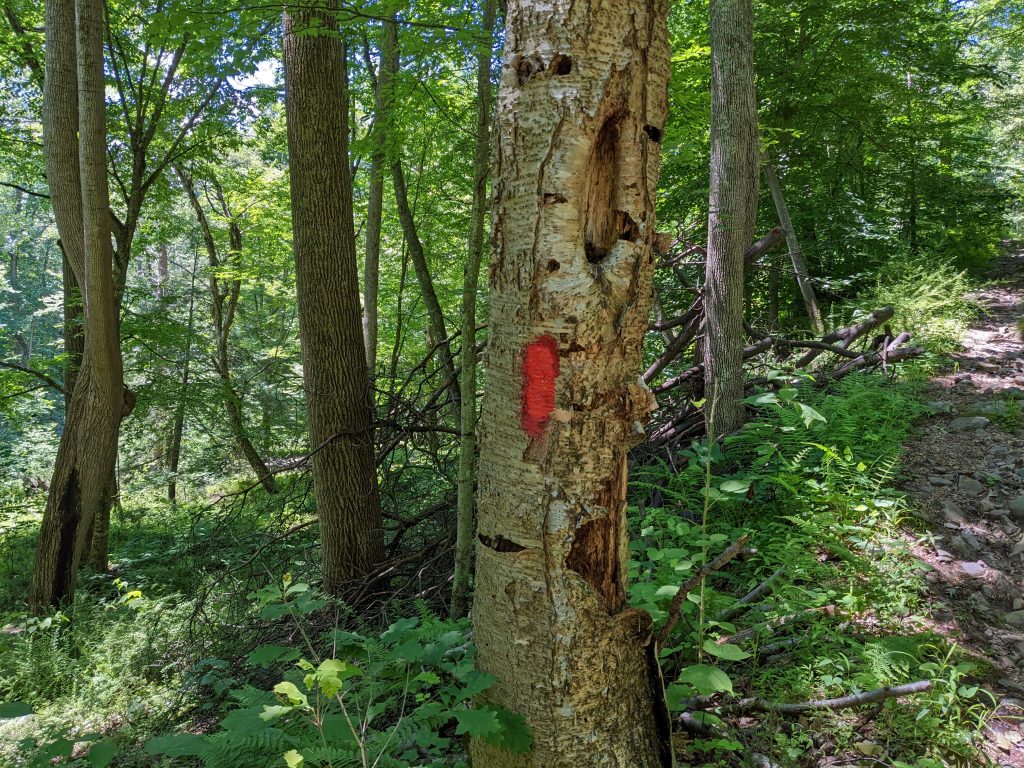