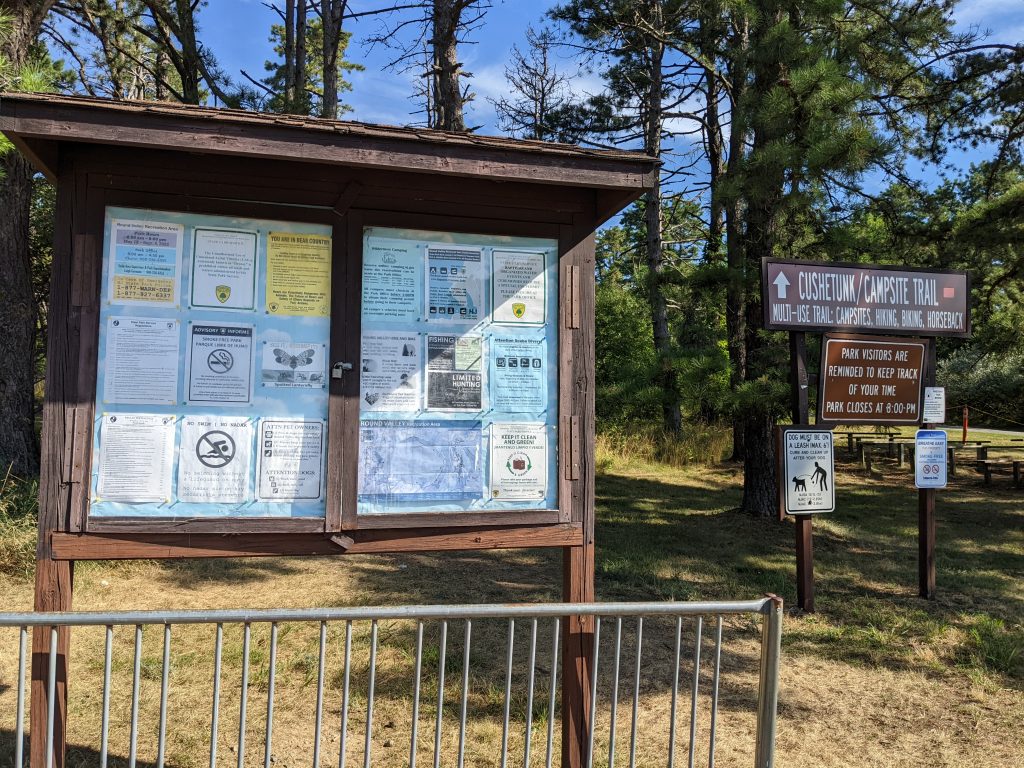 Trails:  Cushetunk (red), Campground (yellow on the map, but I never saw a blaze.) 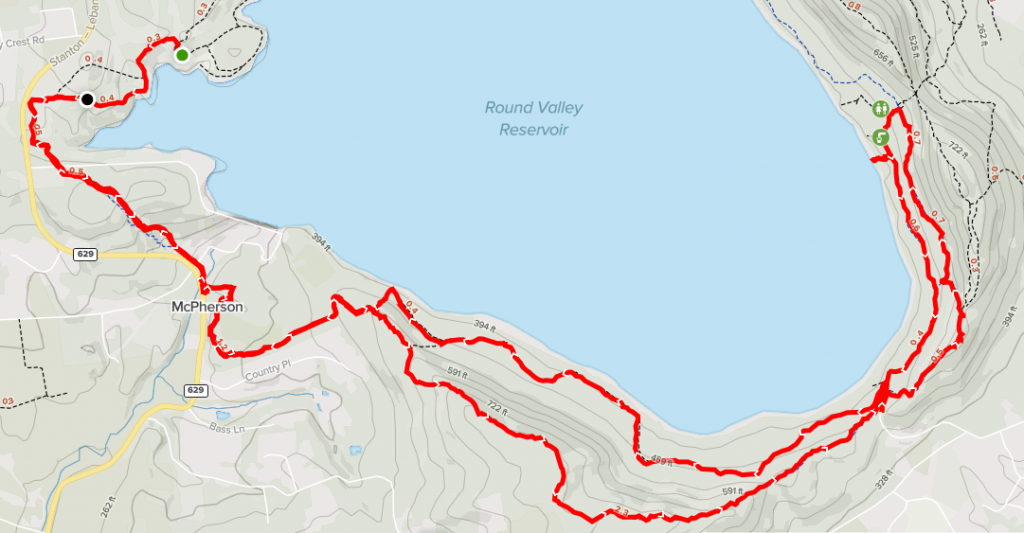 A note on my map.  You can see at the top left, the recording stopped.  I don’t know if that was due to my phone (likely) or AllTrails (also likely.)  This is the second time this has happened where I’ve had an incomplete map.

I had decided to take the Cushetunk trail as far as I could to my campsite, 73, then take the Campground trail back to the Cushetunk to hike out.  There were a couple of spots where I questioned life’s decisions; one going up Cushetunk mountain.  It didn’t stop going up – and it was only 833 feet.  The other spot was the return trip, there are some stairs by the construction work at the dam.  It wasn’t that bad, it’s just that it was 90, and I had done 11 or so miles at that point.

After a half mile into the hike there is a great overlook of the reservoir, right across from the ranger station. 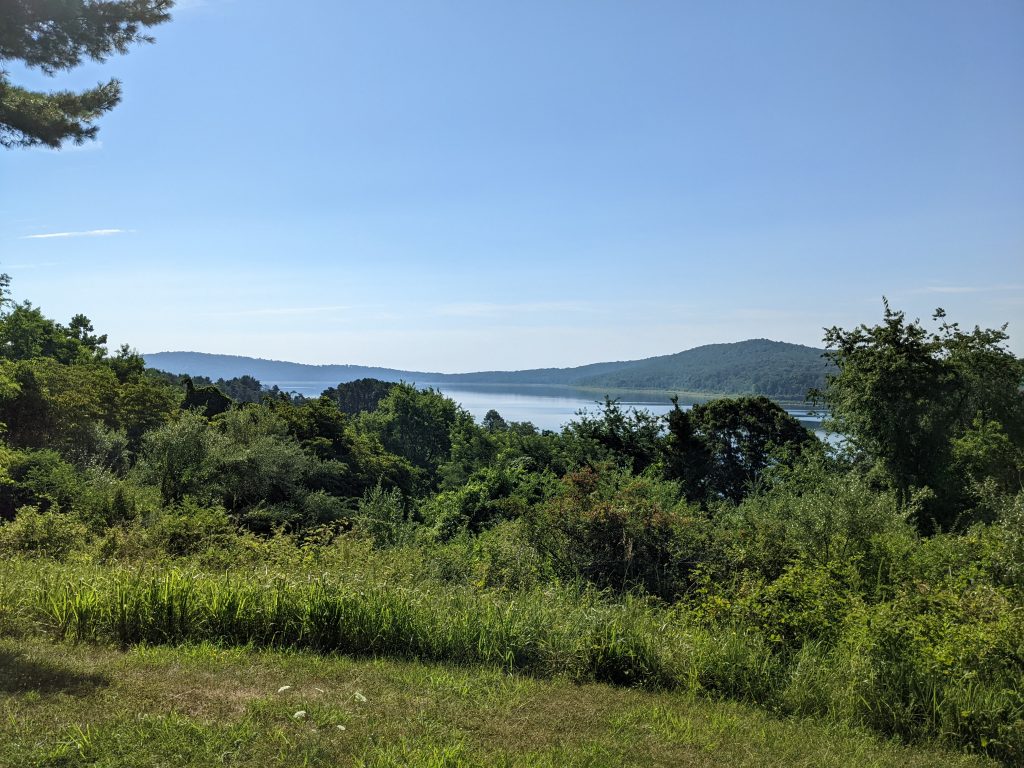 All of the trails were lined with Wineberries.  I didn’t know at the time that they are edible (they are) but I should have known when I saw people at the beginning of the trail picking bags full of them.  They were all over the place.  I should have sampled.  I didn’t see bears this weekend, but bears could have gotten fat on the amount of wineberries I saw. 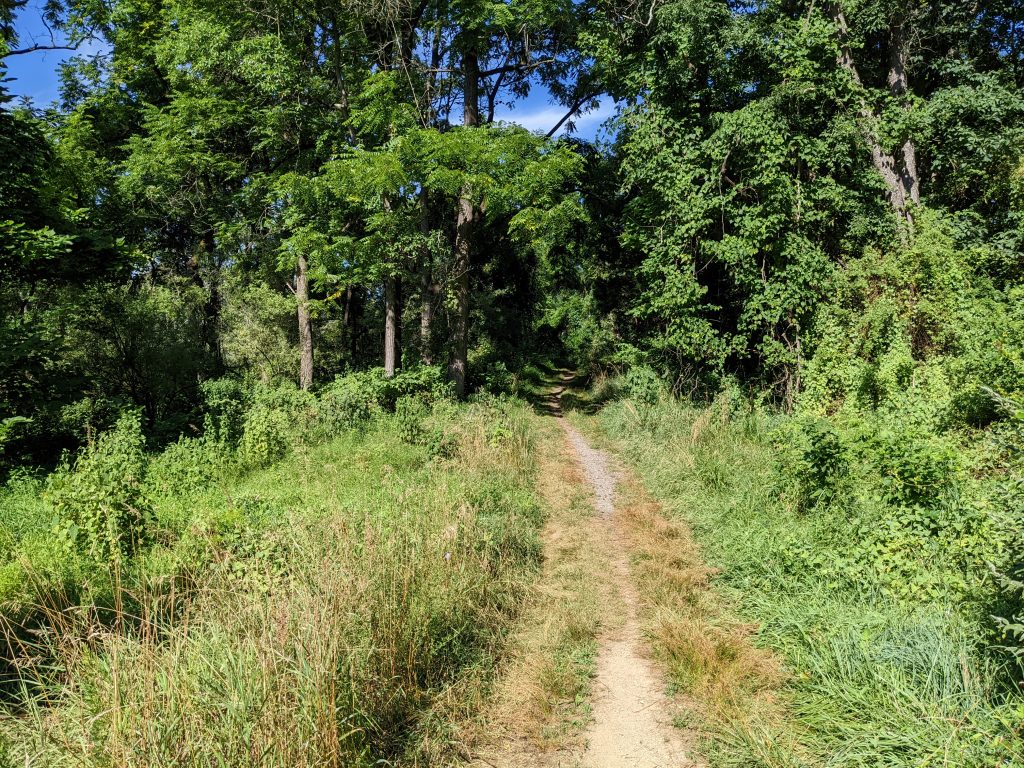 The Cushetunk trail diverts around ongoing construction around the dam.  The trail comes across Hannon – Saurland pond.  There are tons of signs telling you not to swim.  EVEN with the heat of the hike, you couldn’t pay me to jump in this pond. 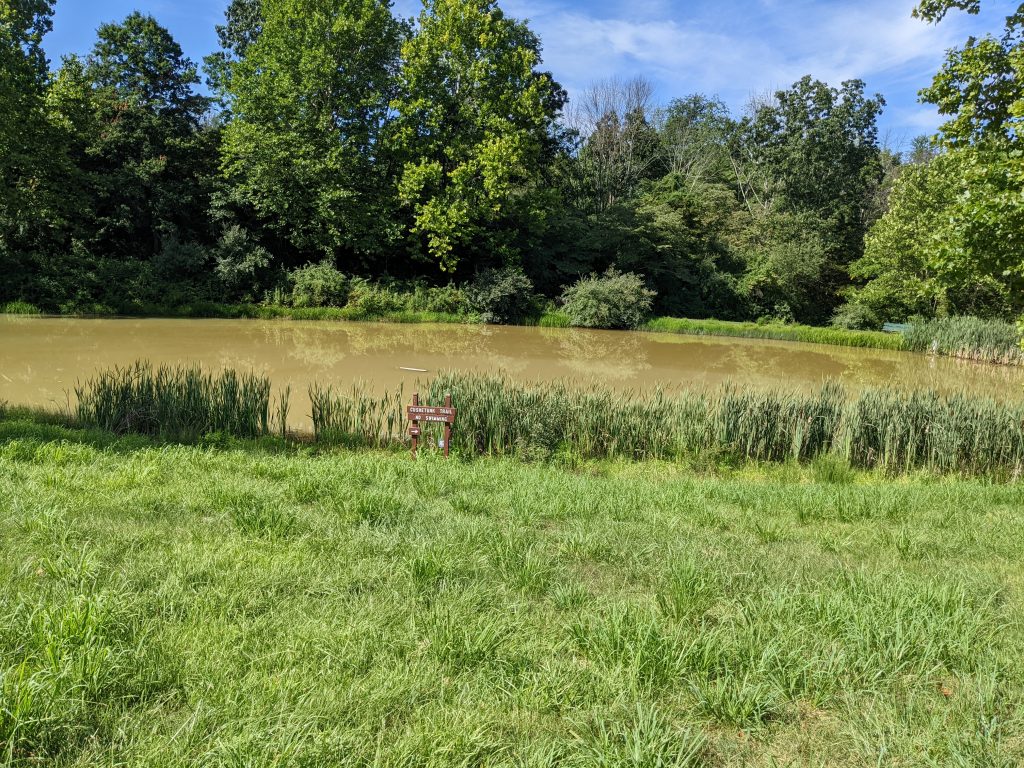 The reservoir, sure, I jumped in that. 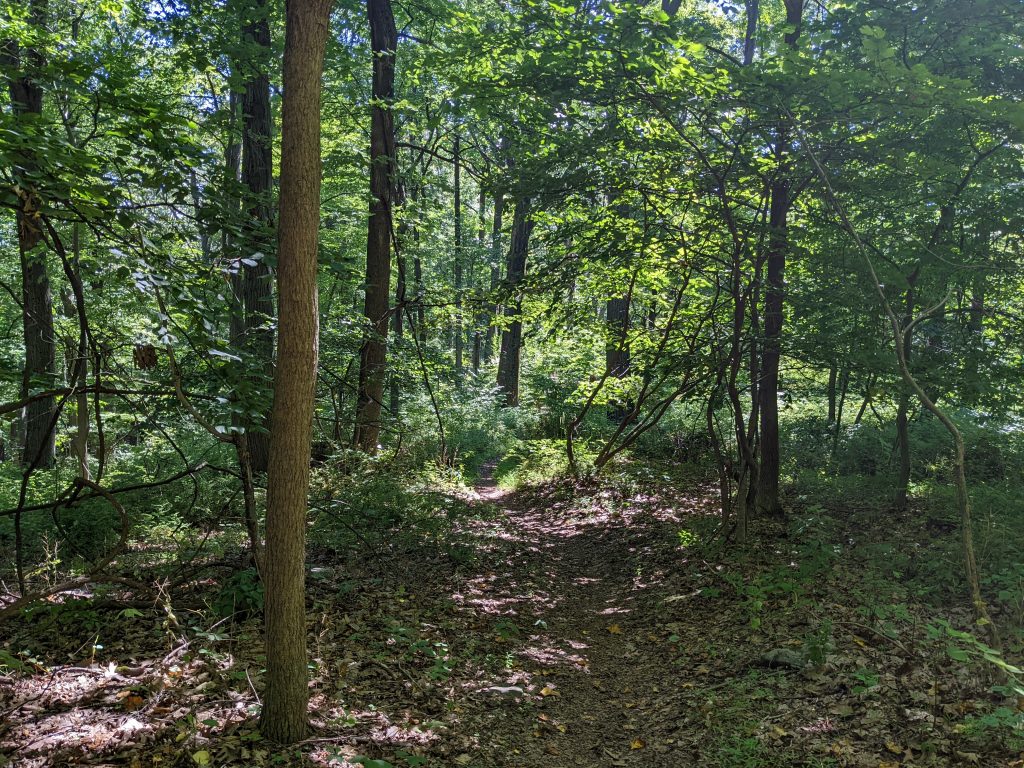 There’s a stretch of the Cushetunk trail that follows a rock wall. 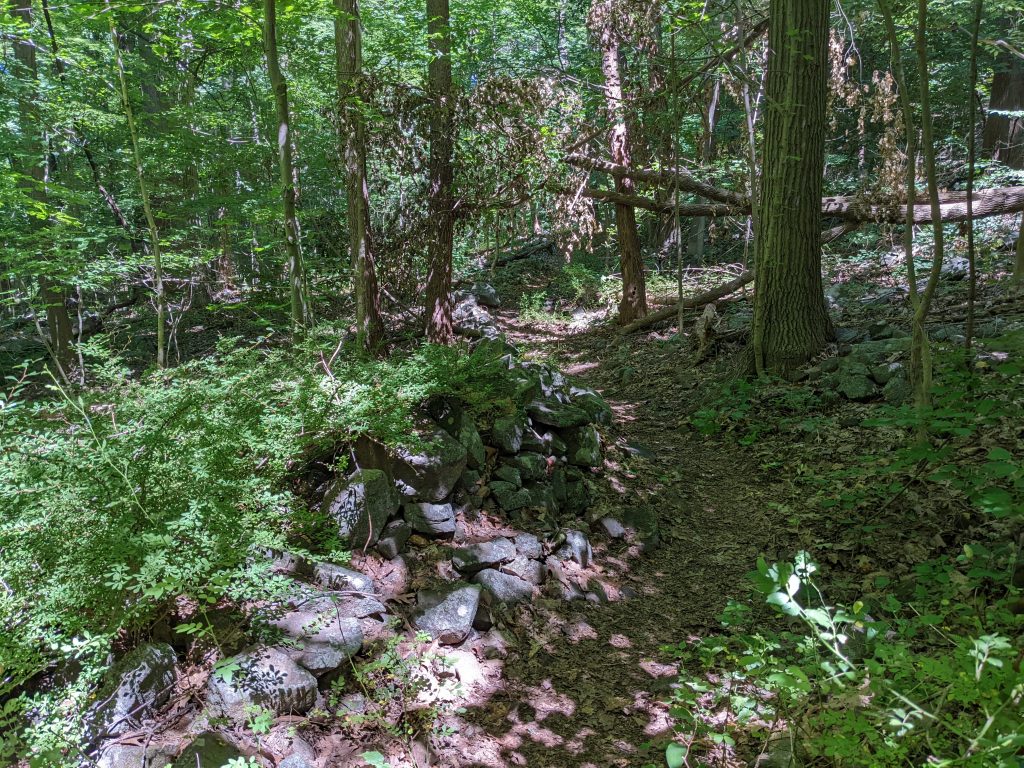 Eventually I came to a gate on the Cushetunk trail, and I had to jump on the Campground trail; which was my plan to get to the campsite.

Before setting up camp, I took a walk down to the water.

As usual, since I haven’t figured out panoramas, or how to stitch the pictures together, you’ll have to make do.  The three pictures are left-to-right, of the reservoir. 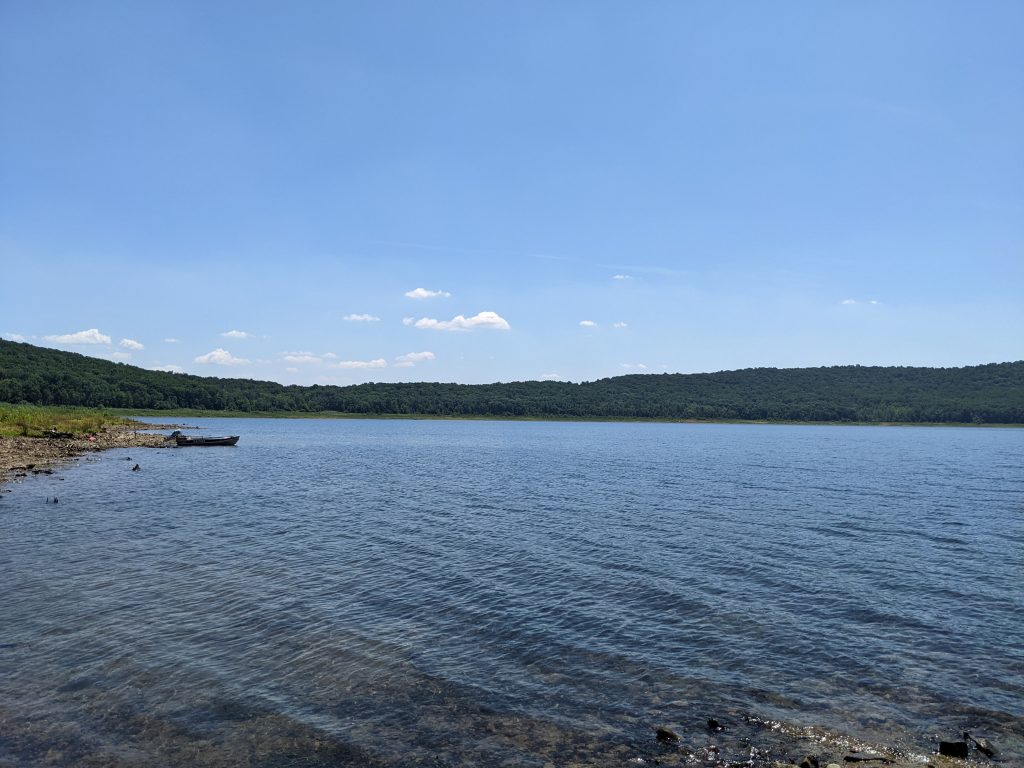 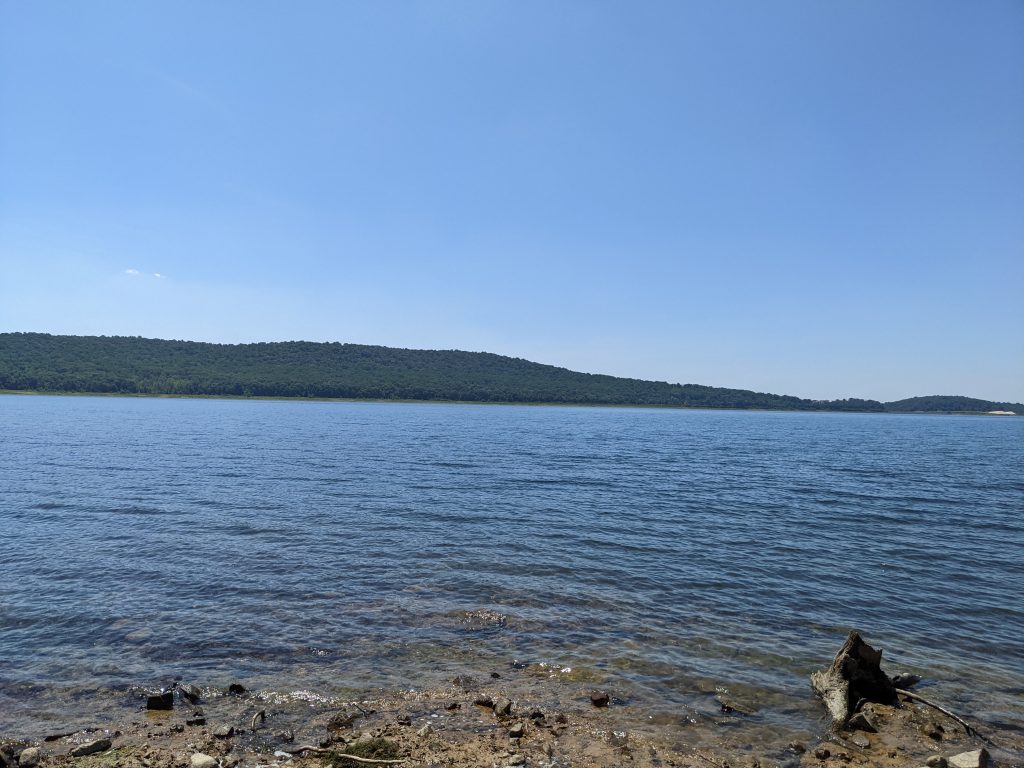 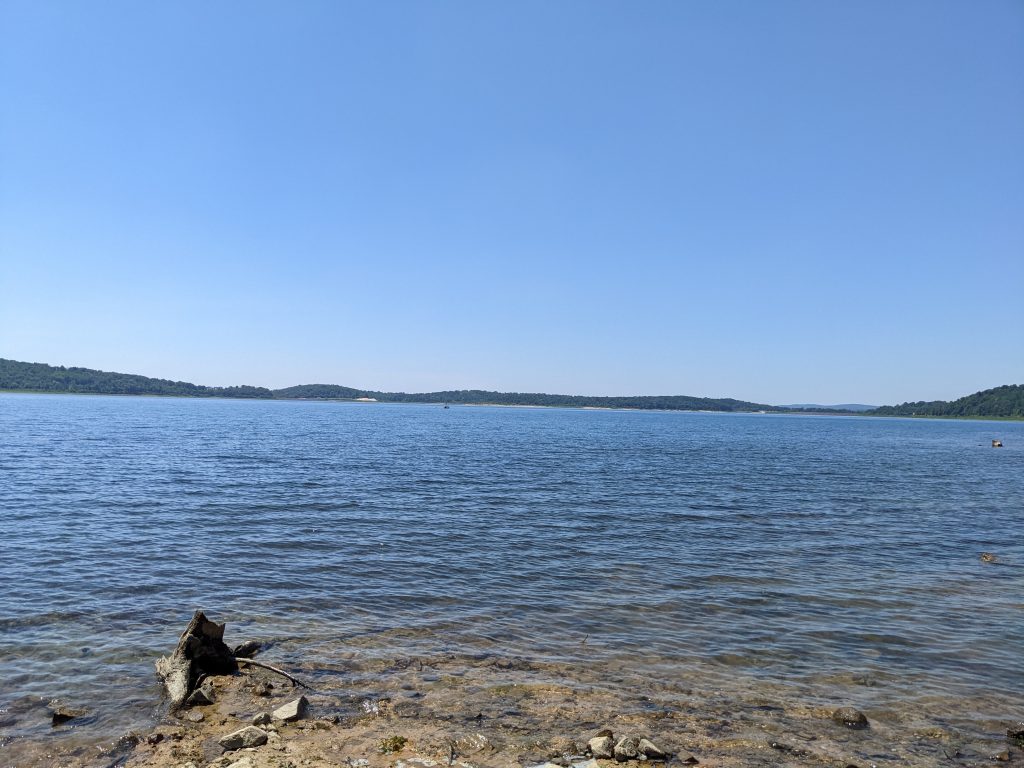 Here’s the “trail” back to the campsite. 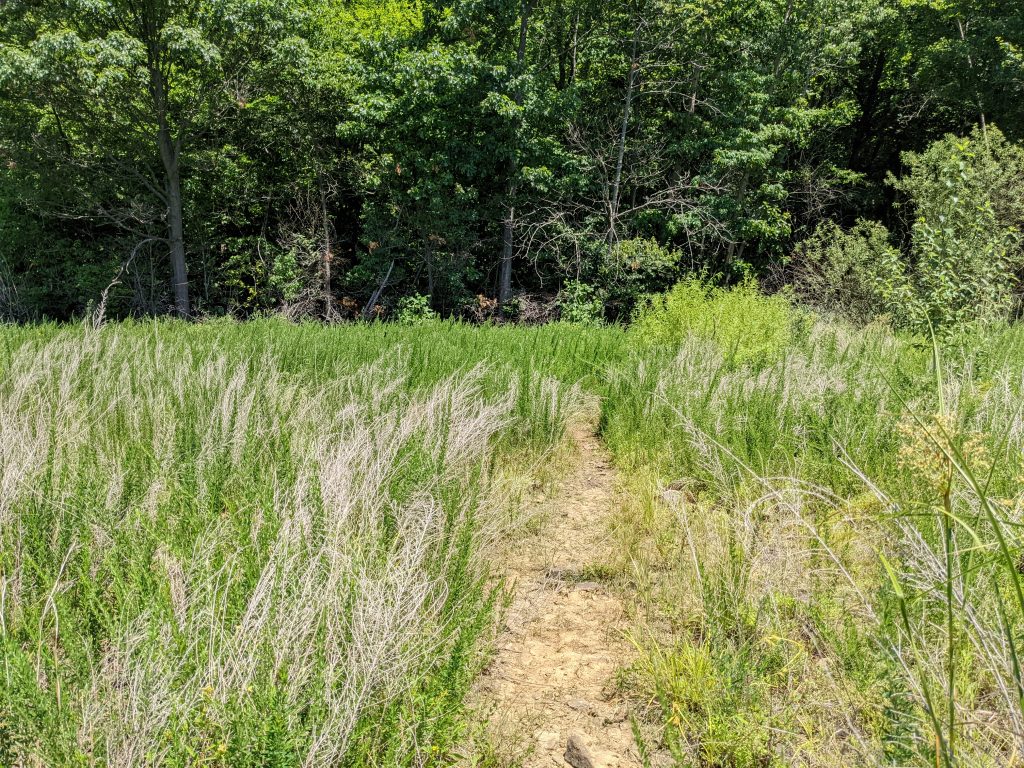 There was plenty of shade, and a constant breeze which kept the temperatures down. 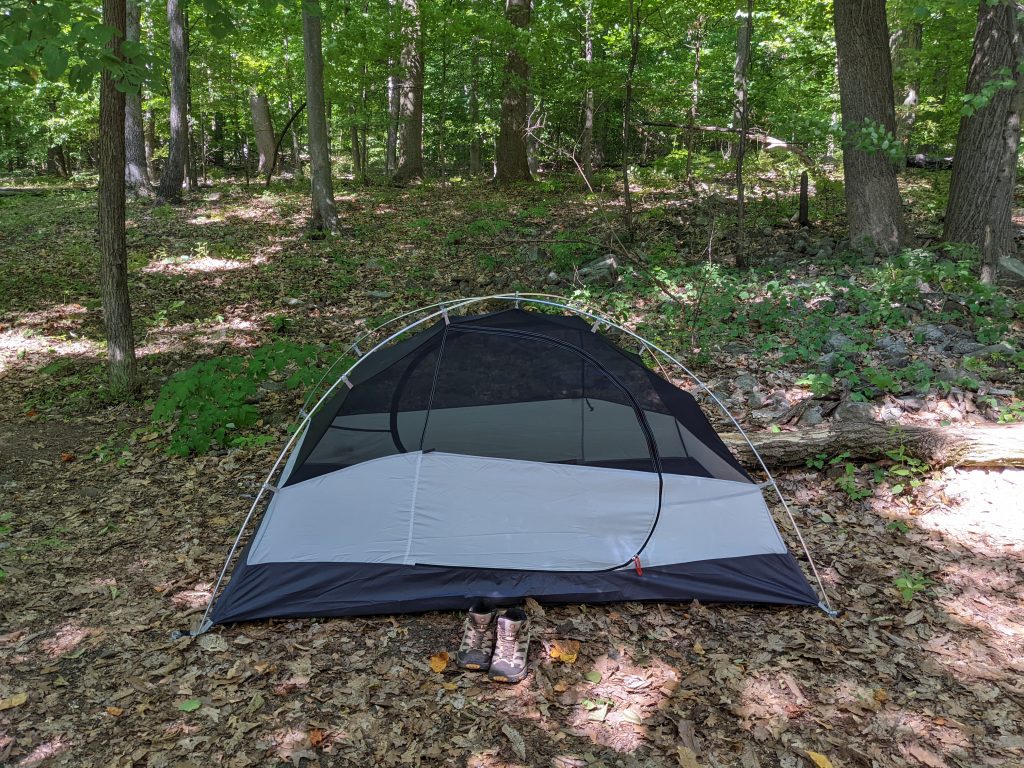 My view of the reservoir from camp. 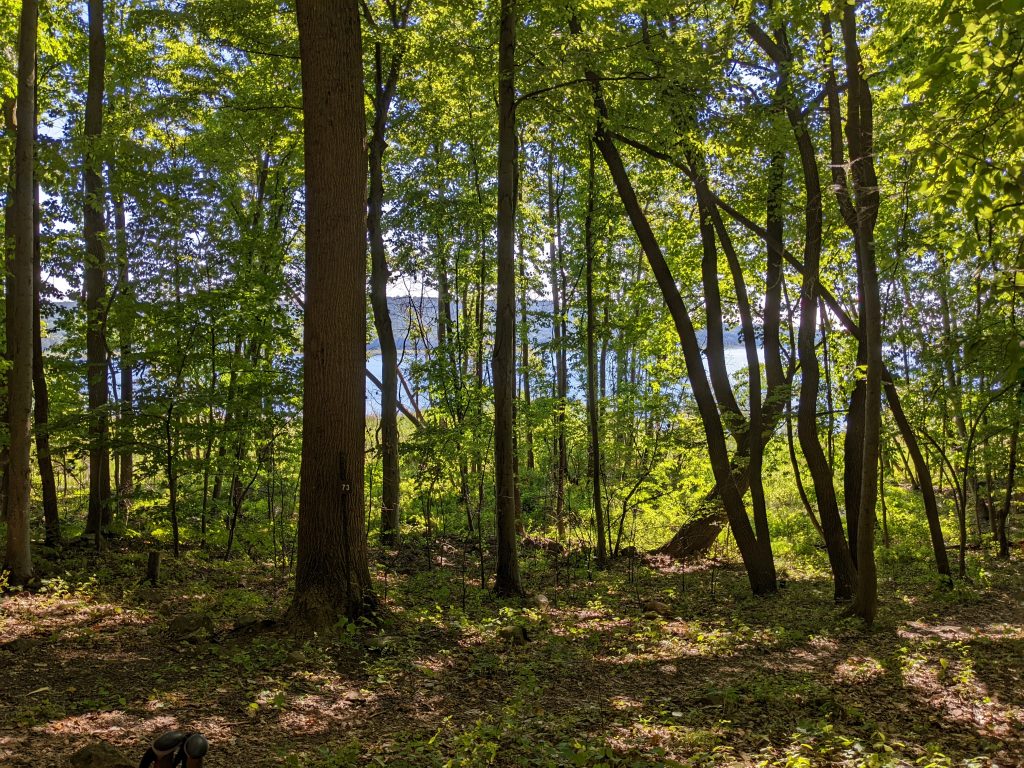 Before bed, I walked down to the reservoir to see the sun set.  Other campers did as well.  I could have stayed longer to capture the red sky, but I wanted to make sure I could get back to camp. 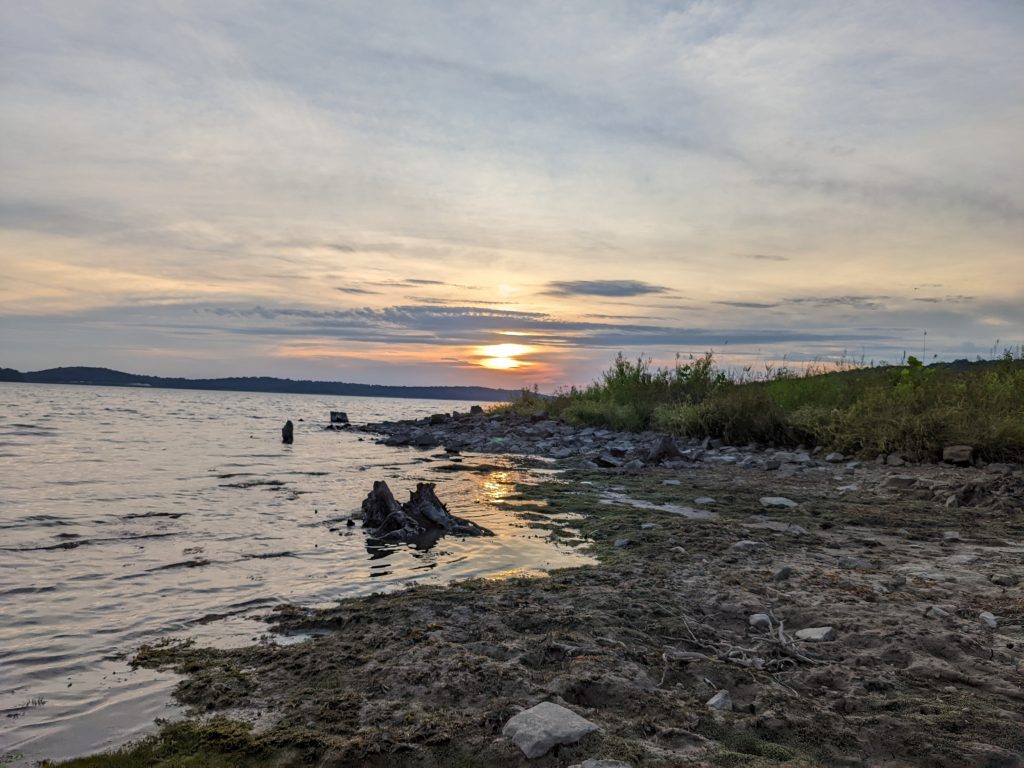 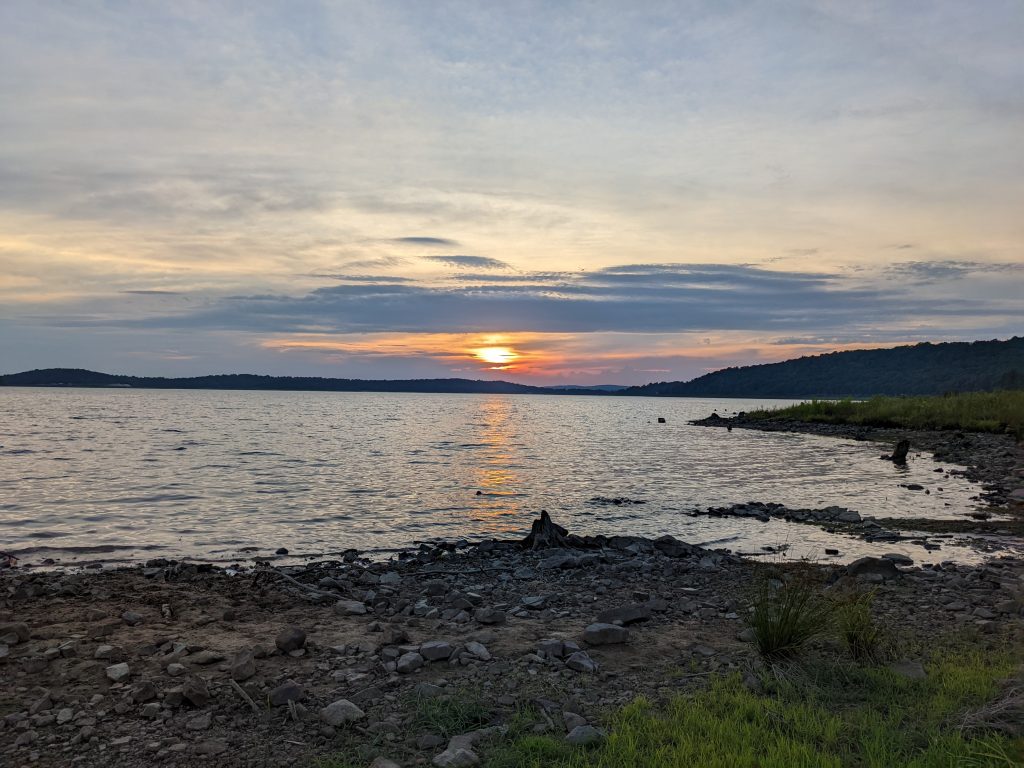 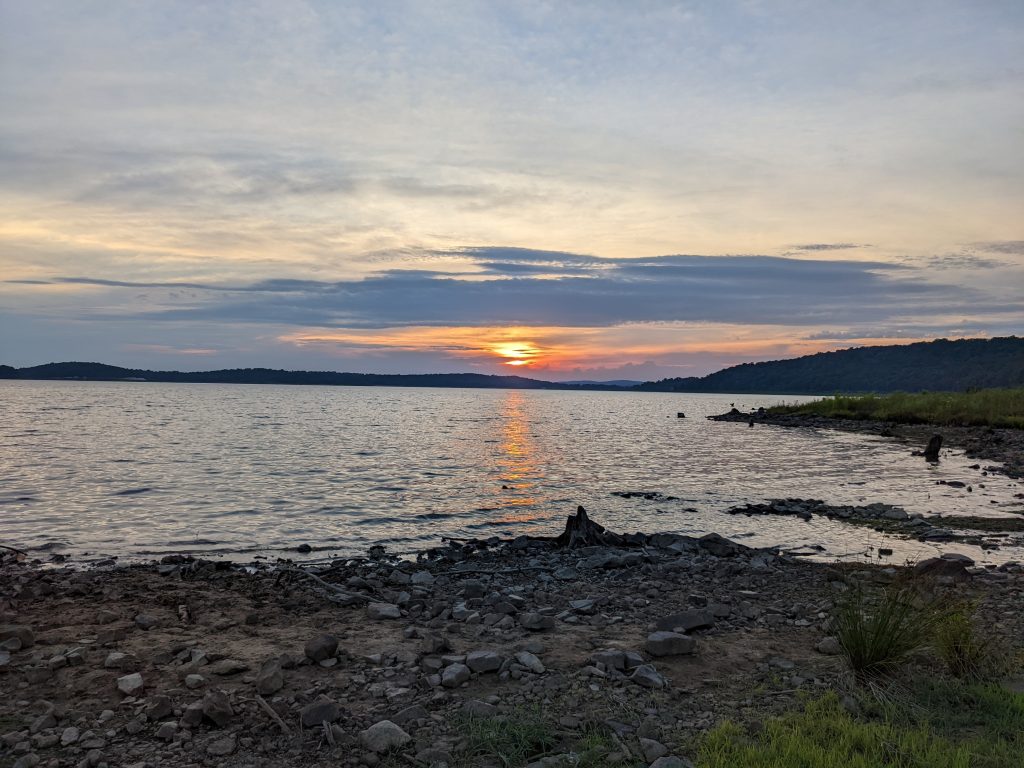 I woke up cold, it was 69 in the morning, with the breeze blowing.

I decided to start hiking back while the sun was not yet over the ridge.  Here’s a shot of the Campground trail. 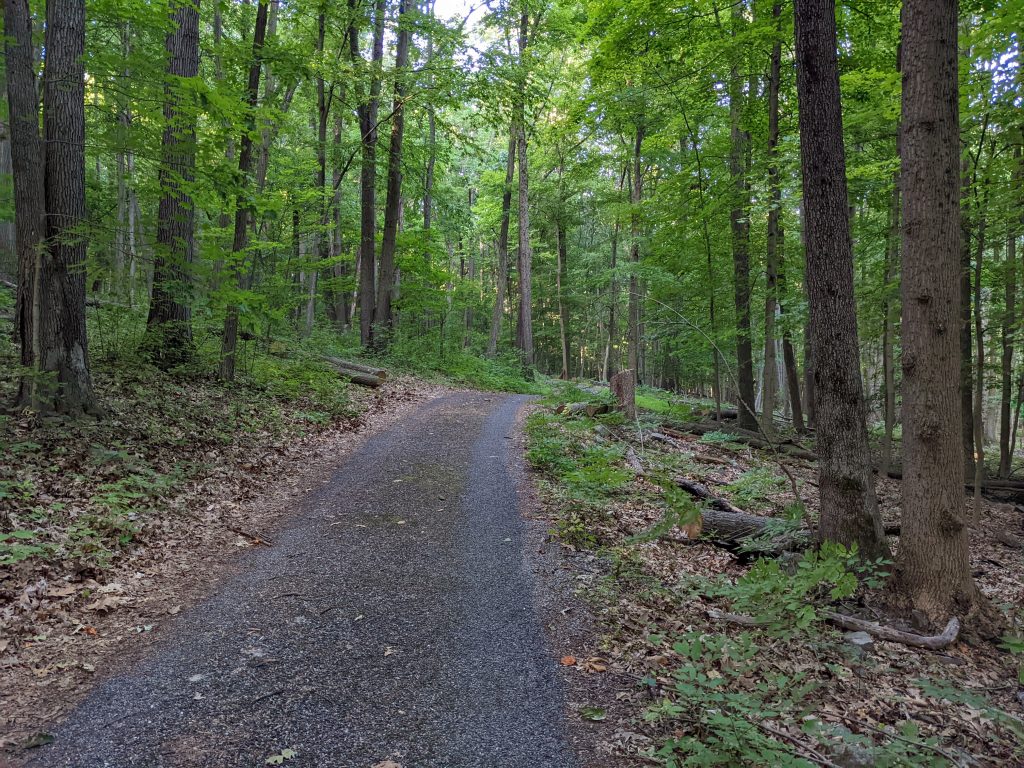 Eventually, though, the sun would come out blazing.  It was already 90 when I got back to my car just after 10 in the morning. 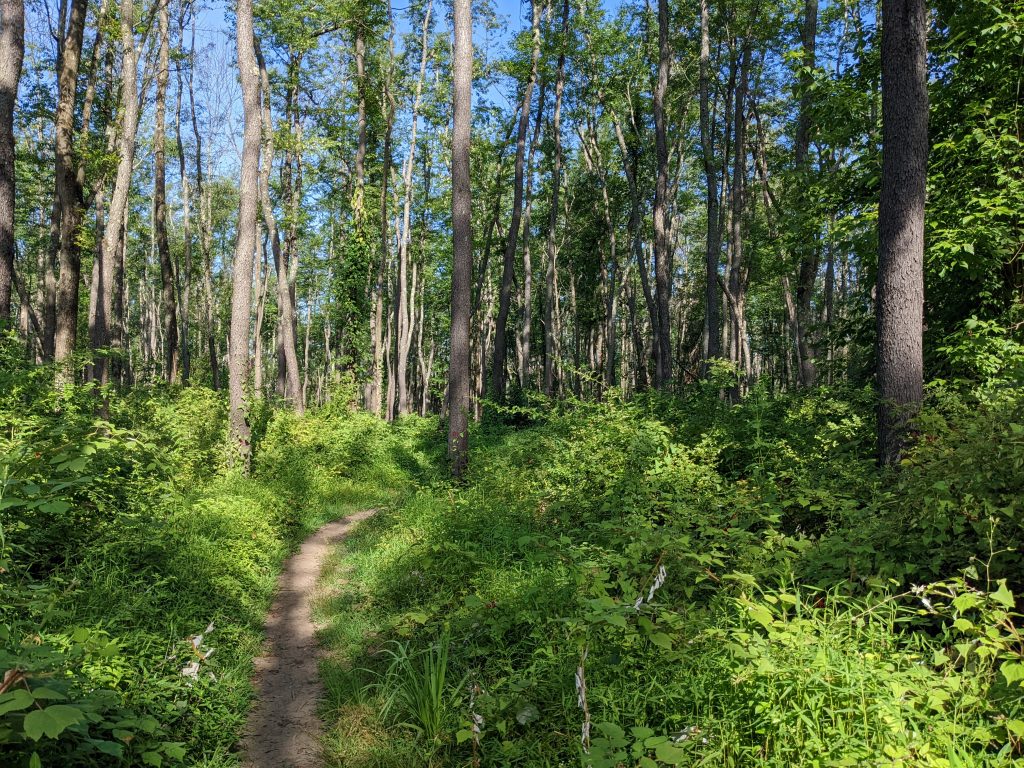 This was a lot of fun, there were a lot of lessons learned.  I would definitely do it again, though I wouldn’t take the full Cushetunk trail, and I would get a camp site early on the Campground trail. 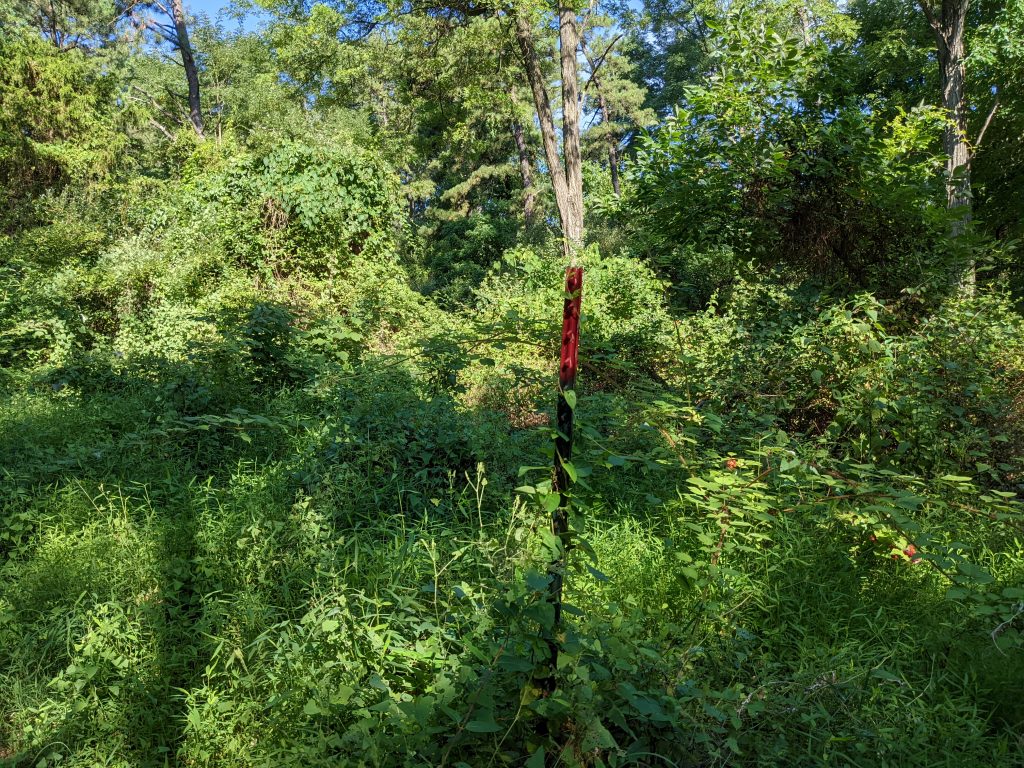 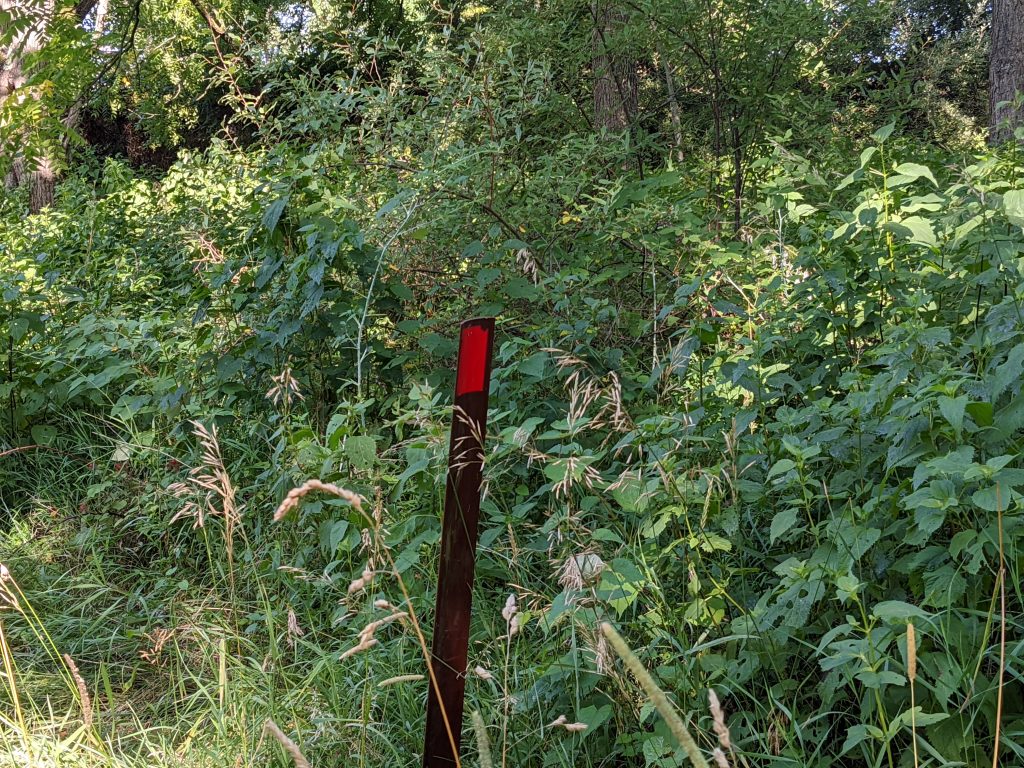