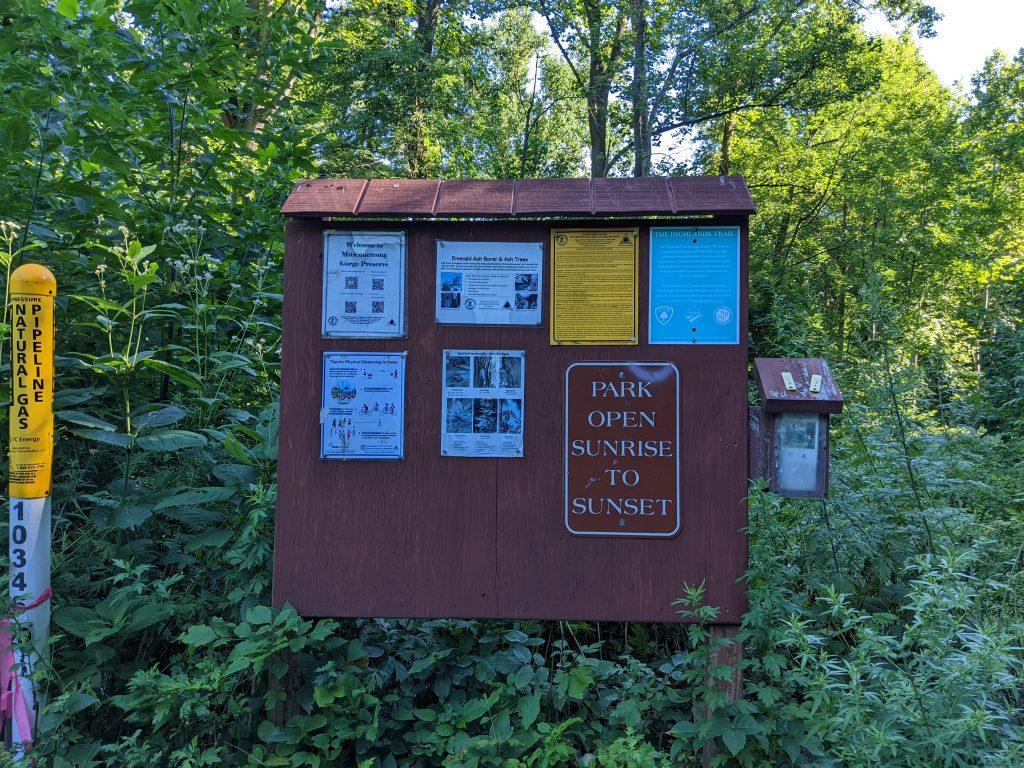 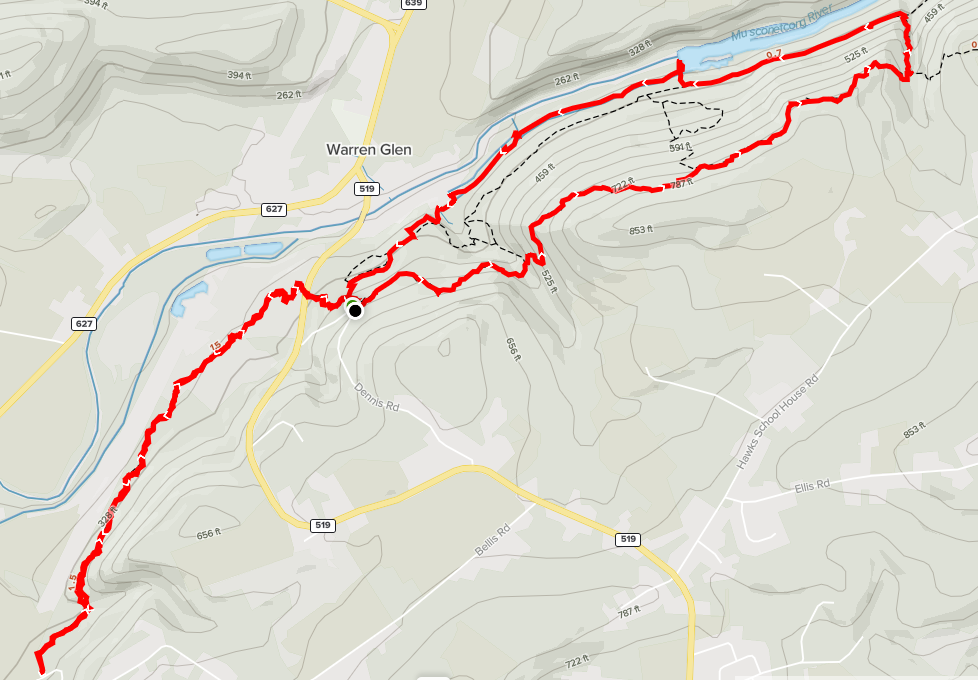 It was a gorgeous day, getting into the mid 80s.  I wore pants with zip off legs thinking if it got too hot, I could take the legs off.  However, it rained a little last night, and the Orange trail was wet, and overgrown.  I’m glad I left the legs on.

After parking, I hiked the Orange trail as an out and back.  Before 519, it’s a nice trail, well maintained. 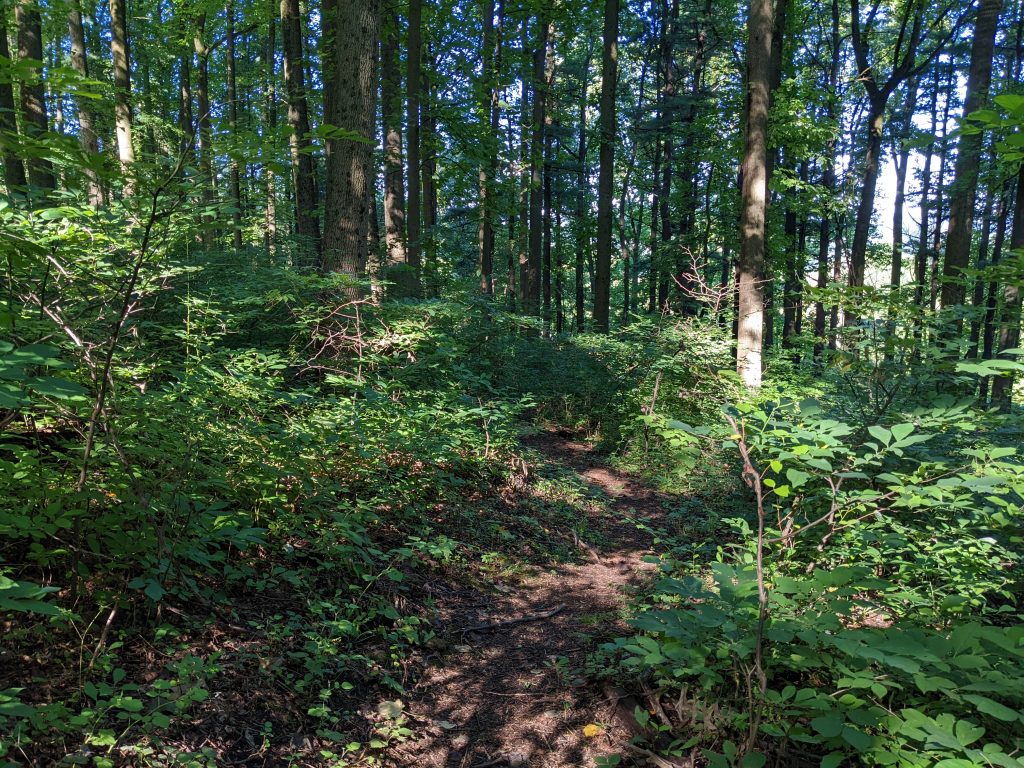 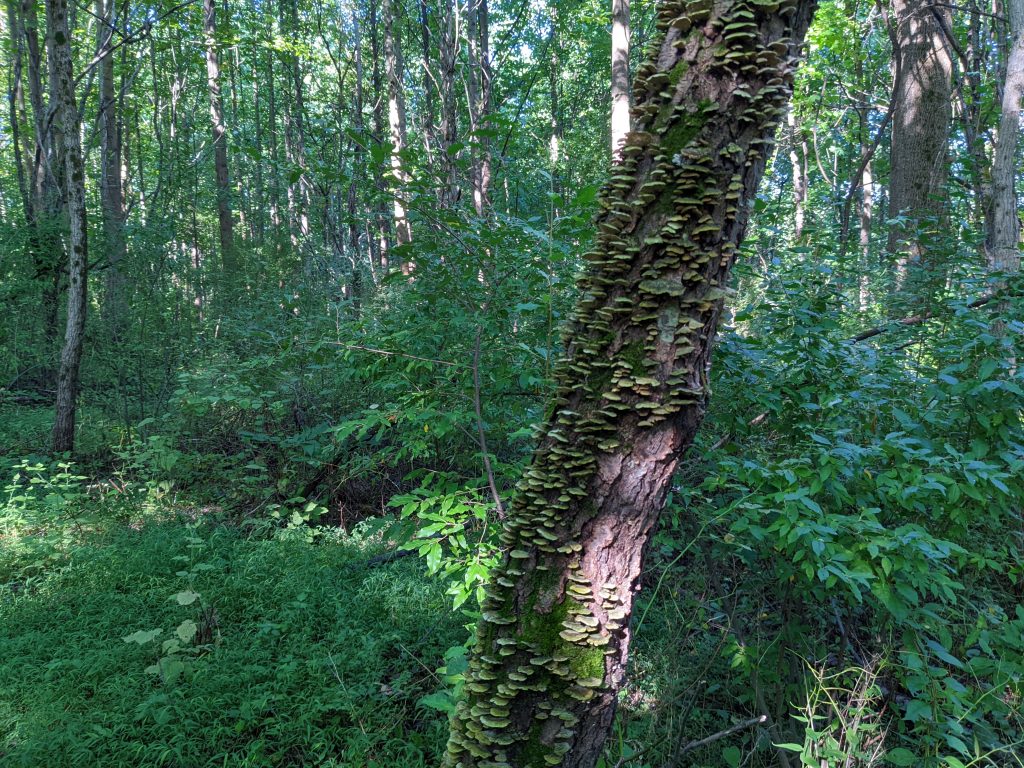 After crossing 519, there are stretches of the trail that are extremely overgrown.  And there were numerous spider webs crossing the trail; I felt like Indy going after the idol. 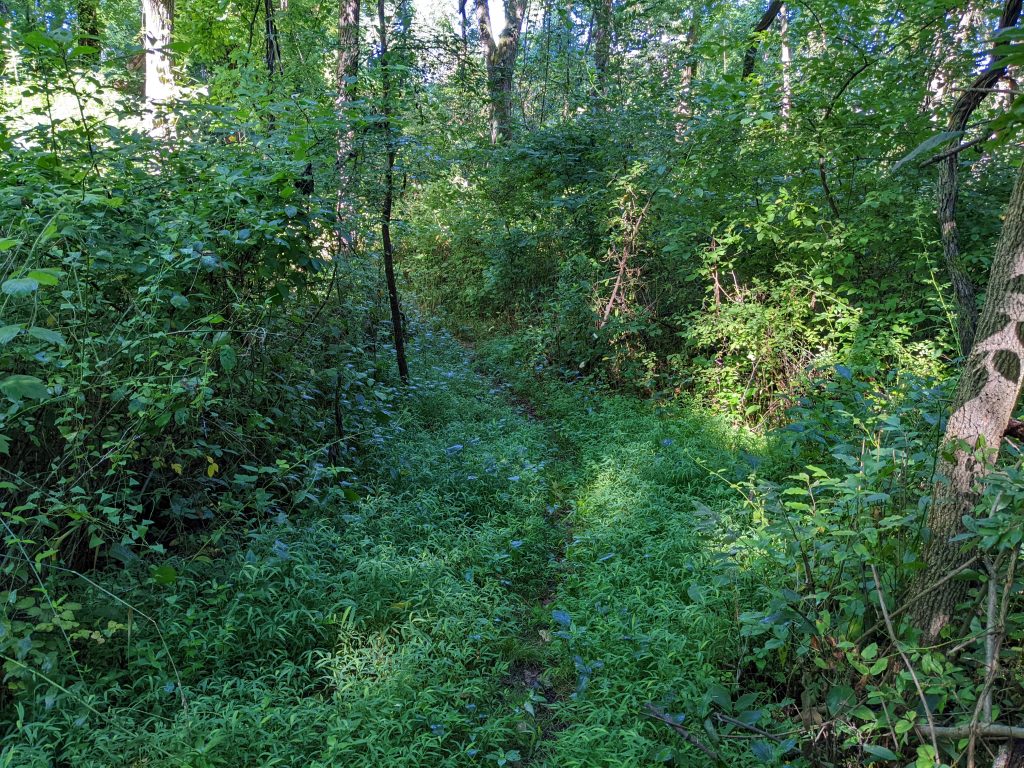 There are a couple of spots where the trail opens up. 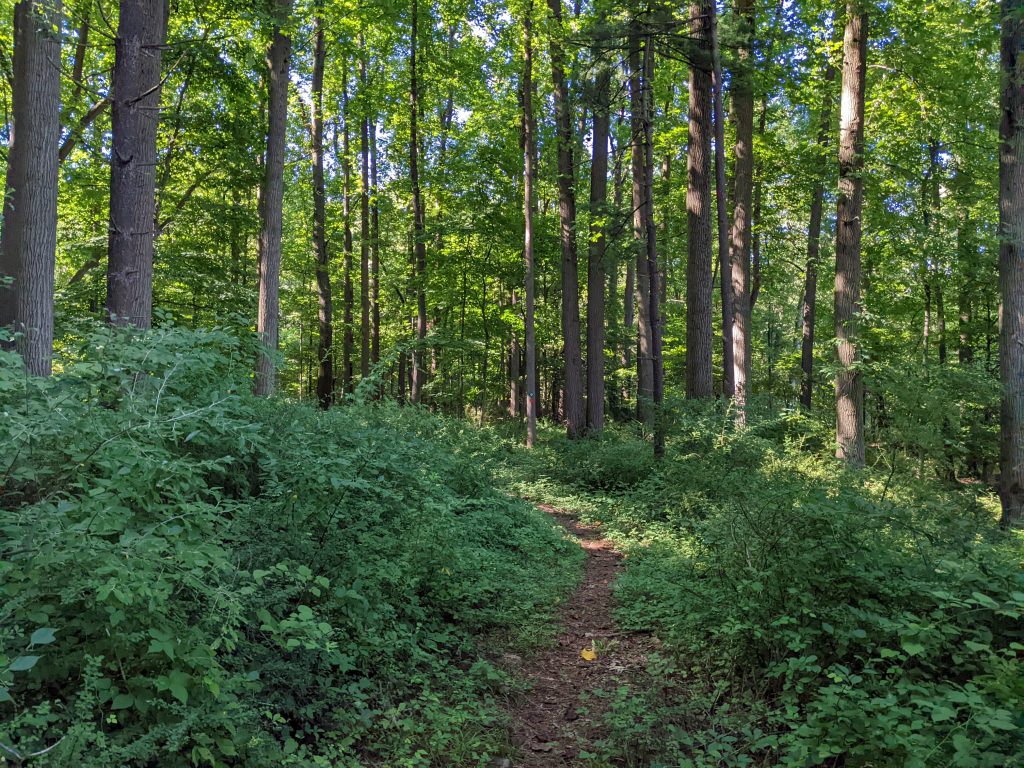 The trail ends while passing a cornfield just by a road.  The Highlands Trail keeps going, but I was not cutting through the overgrowth.  There was a nice view, and a great breeze by the cornfield. 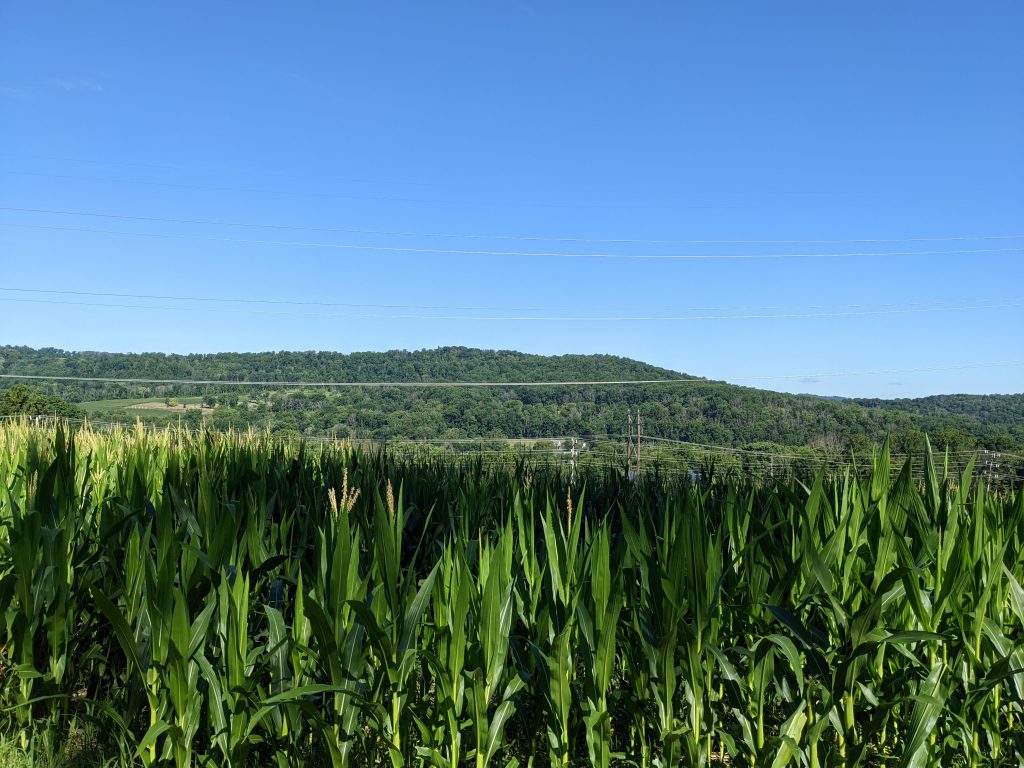 Back at my car, I jumped on the Yellow Trail (which is part of the Highlands Trail as well.)  This trail climbed to the top of a ridge and followed the ridge for a while.  It was much easier to move with a day pack on as opposed to the backpacking pack.

Like last week, there were a lot of wineberries out.  This time, I channeled my inner bear, and gorged when I saw ripe berries.  Last week would have been the mother lode though. 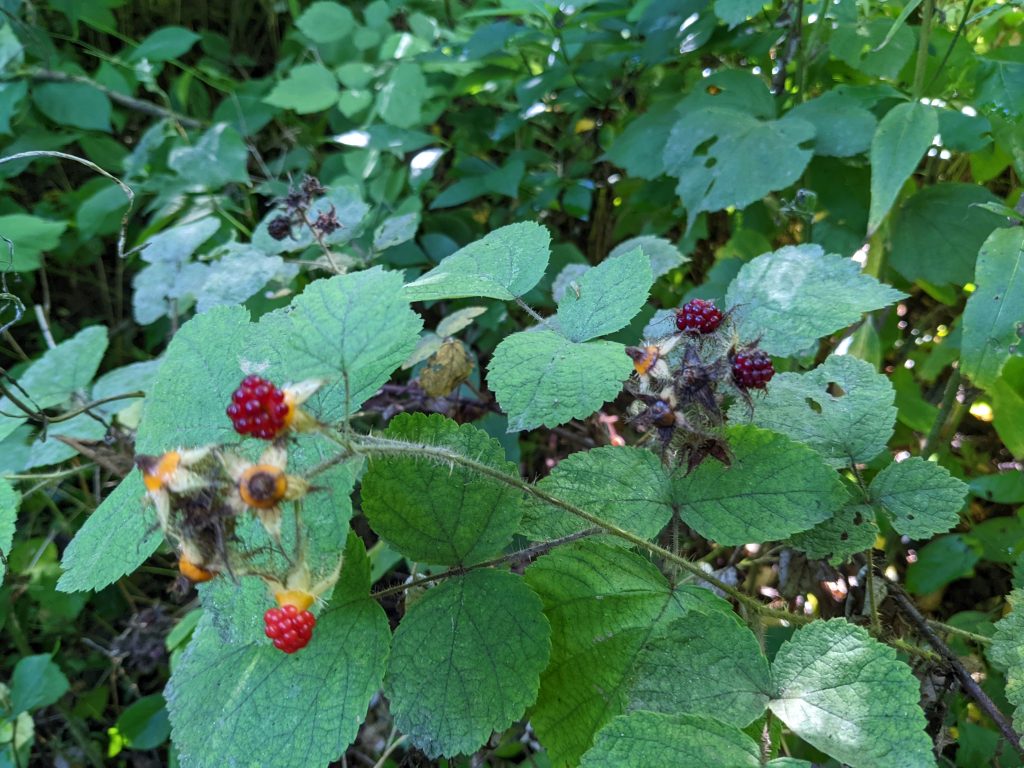 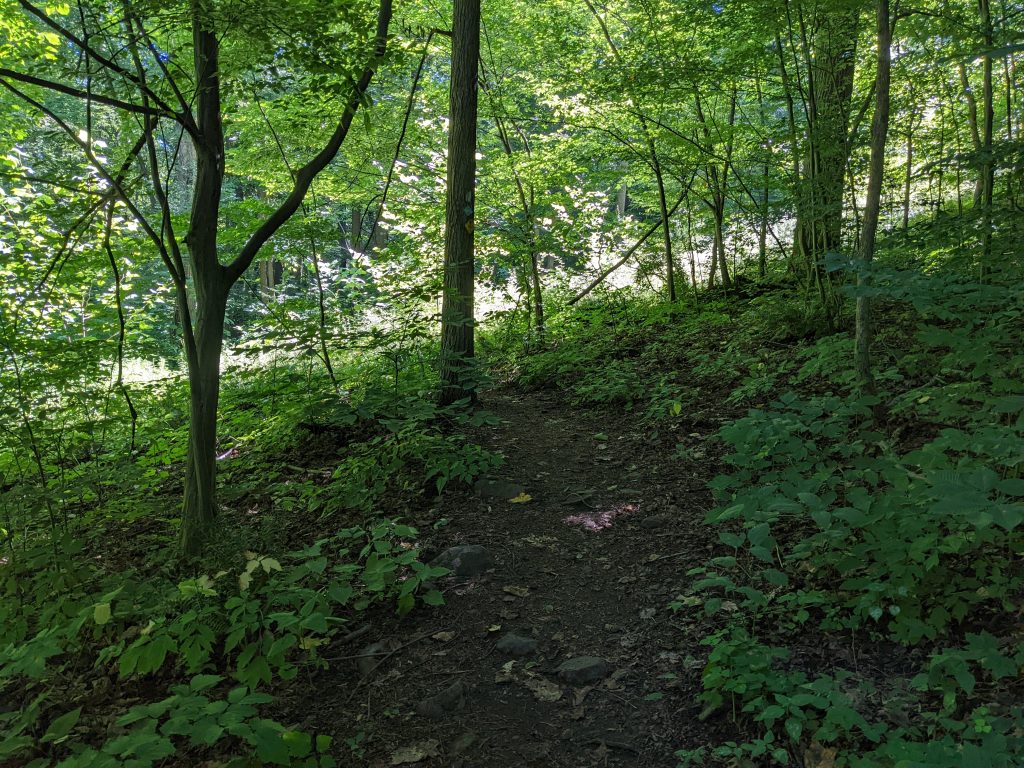 The first stream crossing is Scout Run, which had lots of water flowing through. 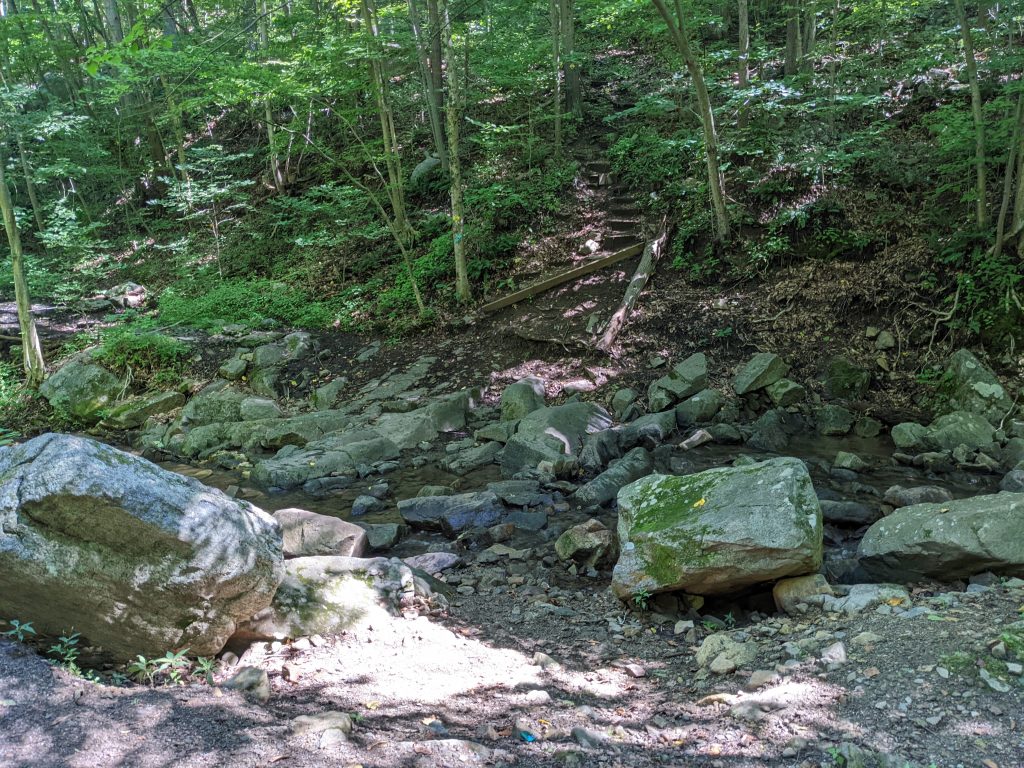 All throughout the ridge top I saw toads scurrying about and made sure not to step on them. 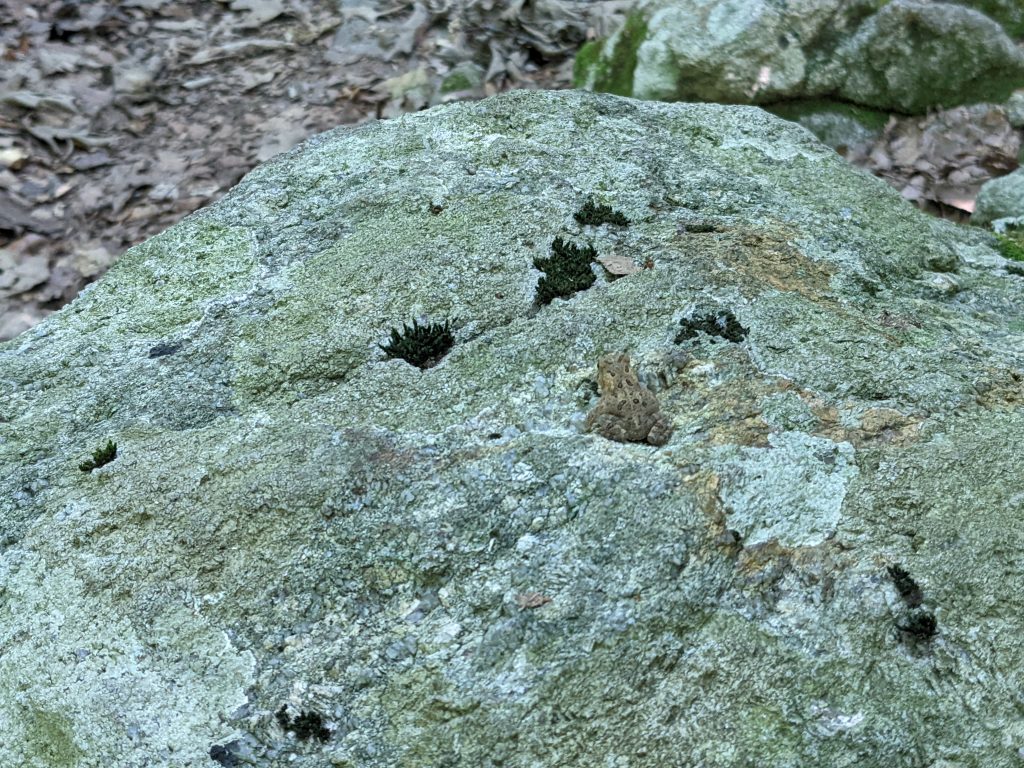 The highest point on the ridge will have a great view once the leaves are off the trees. 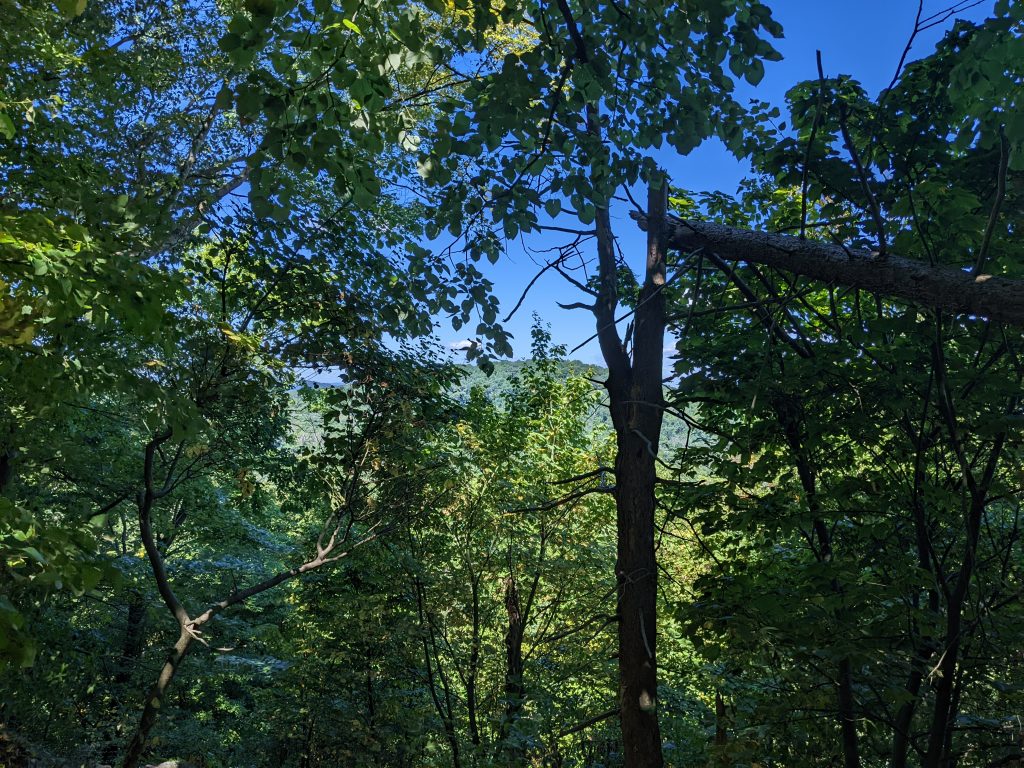 I followed the Yellow trail until the next stream crossing at Pine Run.  Instead of crossing, I took the White (?) trail down to the old rail bed. 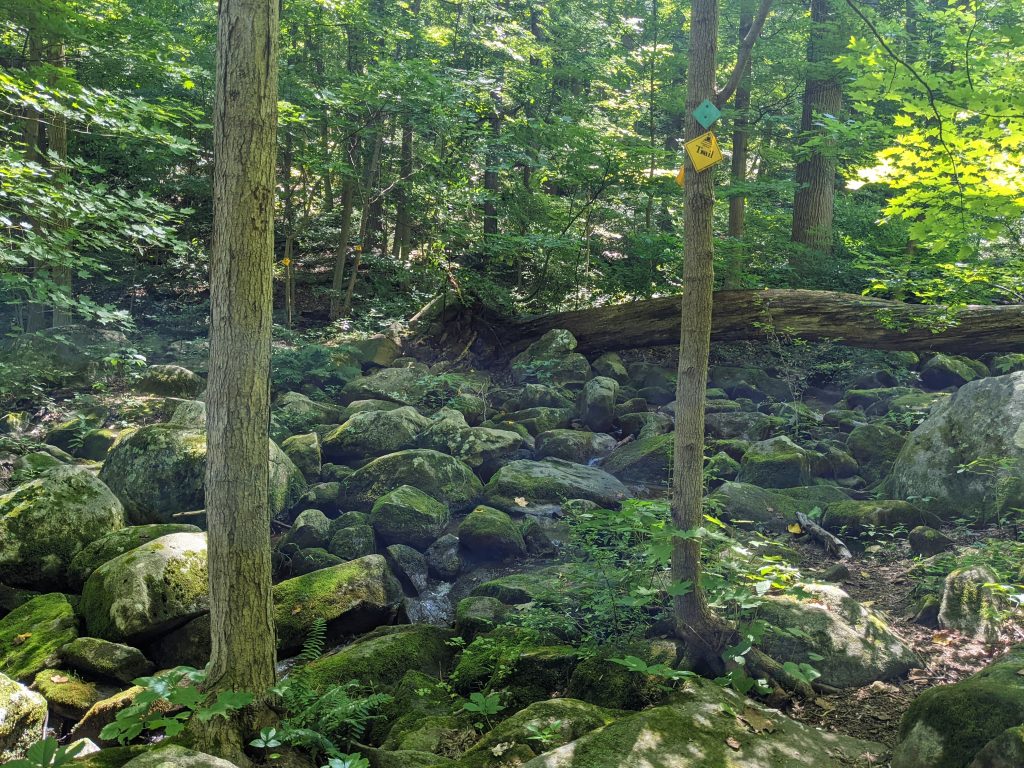 This trail is not on the map.  And the trail is pretty much straight down to the base of the gorge, with lots of rocks.  When I came to the base, there was yellow caution tape closing off the trail going up.  There was no tape at the top preventing anyone from coming down.  Here’s a shot looking up, the picture doesn’t do the steepness justice.  You can see the yellow caution tape to the right. 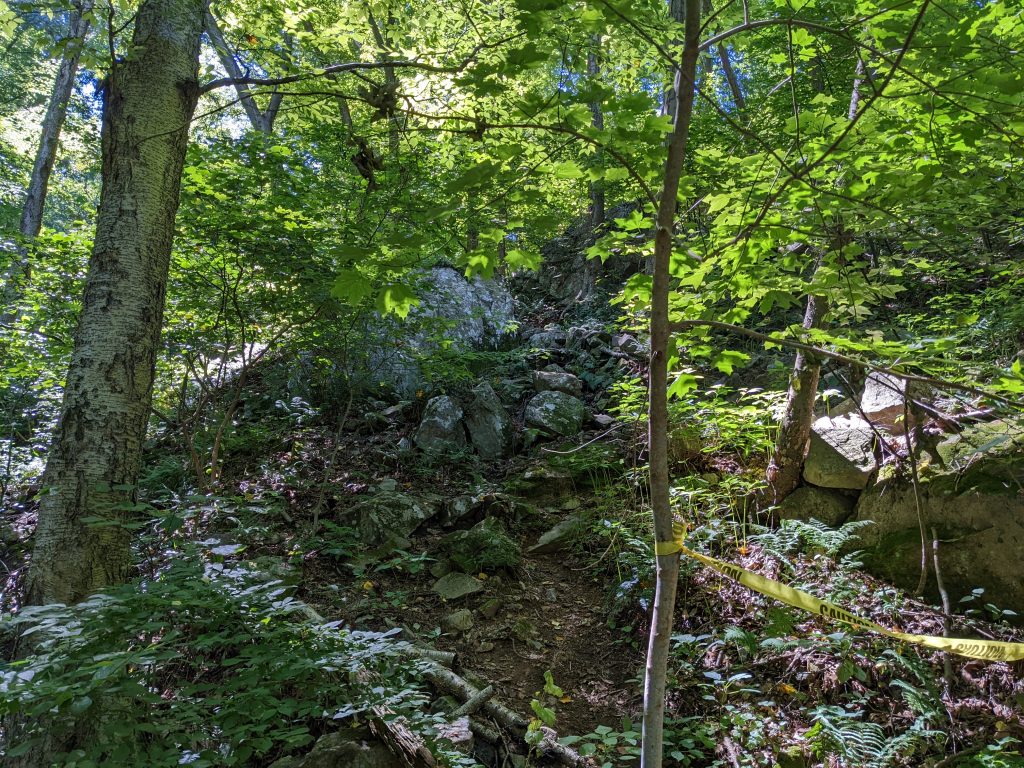 Walking on the old rail bed was pleasant.  There were plenty of wineberries, and the trail was pretty flat and smooth. 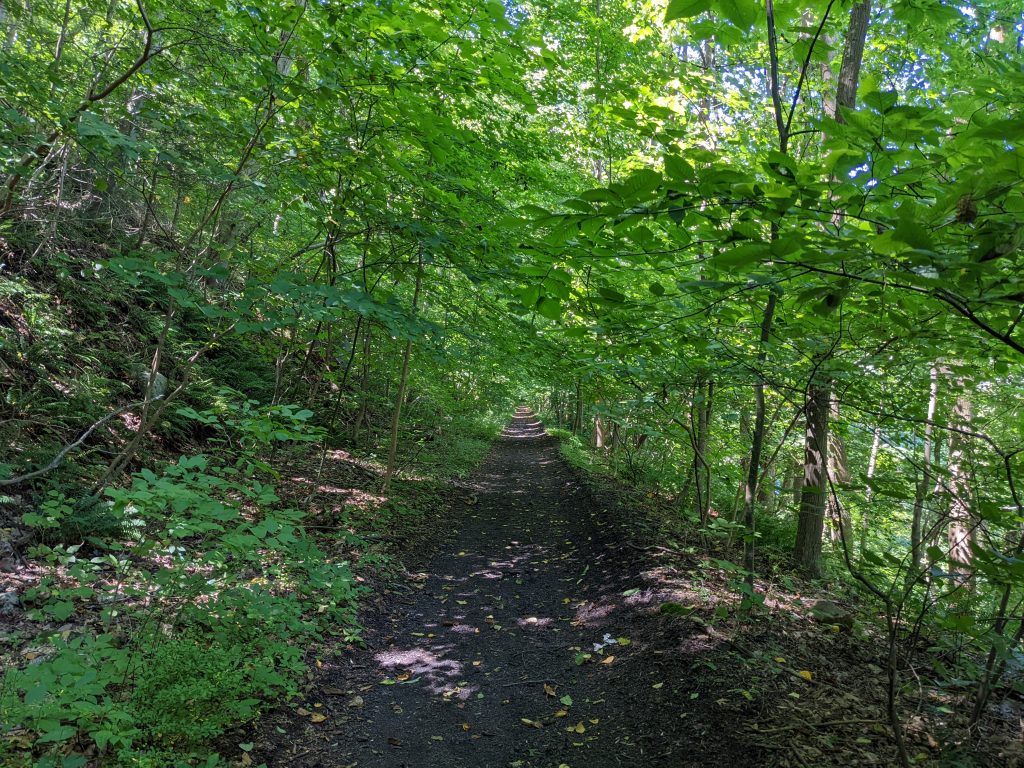 After a few minutes I could hear people down in the Musconetcong river.  There were loud yells, and then a crash.  I found a small spur trail that headed in that direction, it had one steep section I sort of slid down.  The trail came out at a dam, where people were using the dam as a water slide to go down and fall into a big pool.  There was enough water that kayaks were going down as well.  I would have loved to have tried it, but I had no idea the dam was here and I wasn’t getting soaked without a good way to dry off.  I watched one kayak go down, and it was awesome. 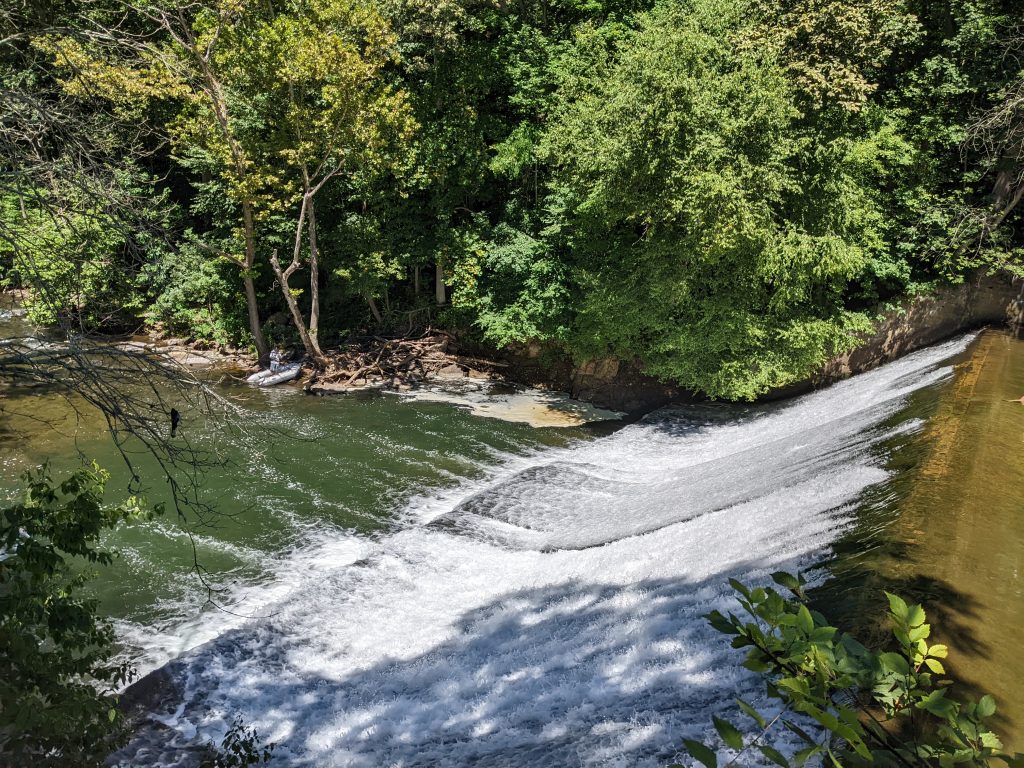 Someone at the dam suggested I take an old trail that split a stream and the river back towards the car.  It would go by the old paper mill and factory, so I changed my plans and followed that path. 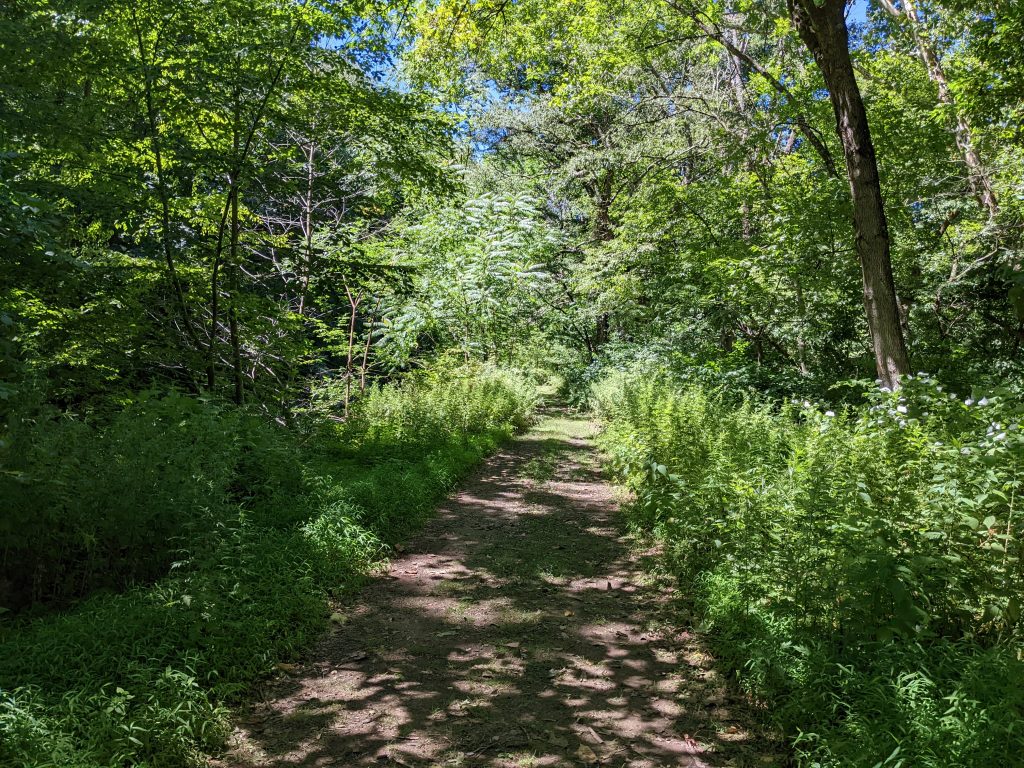 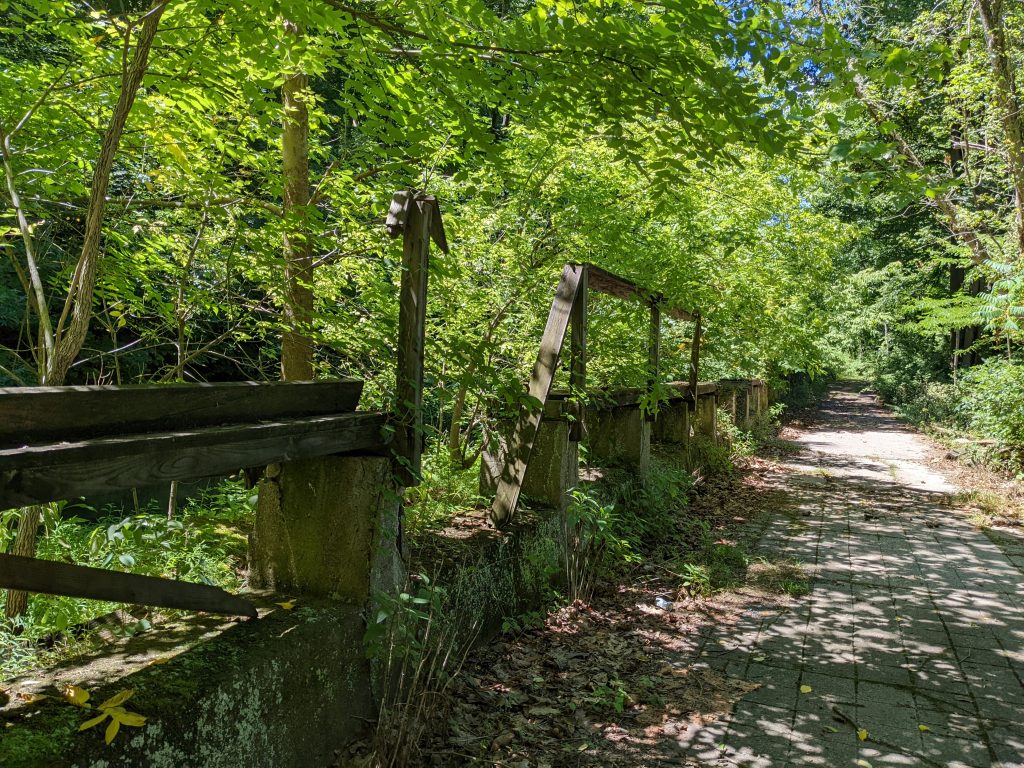 The stream on the left was really nice, and supposedly had fish. 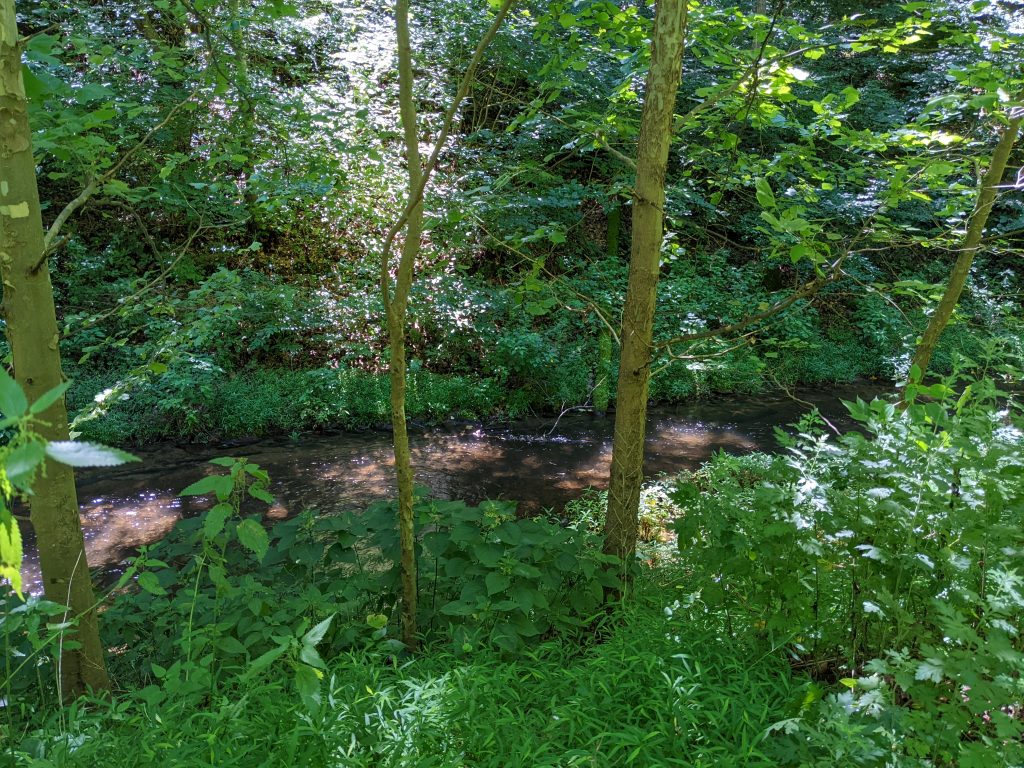 The trail went over a small set of falls where the stream fell towards the river. 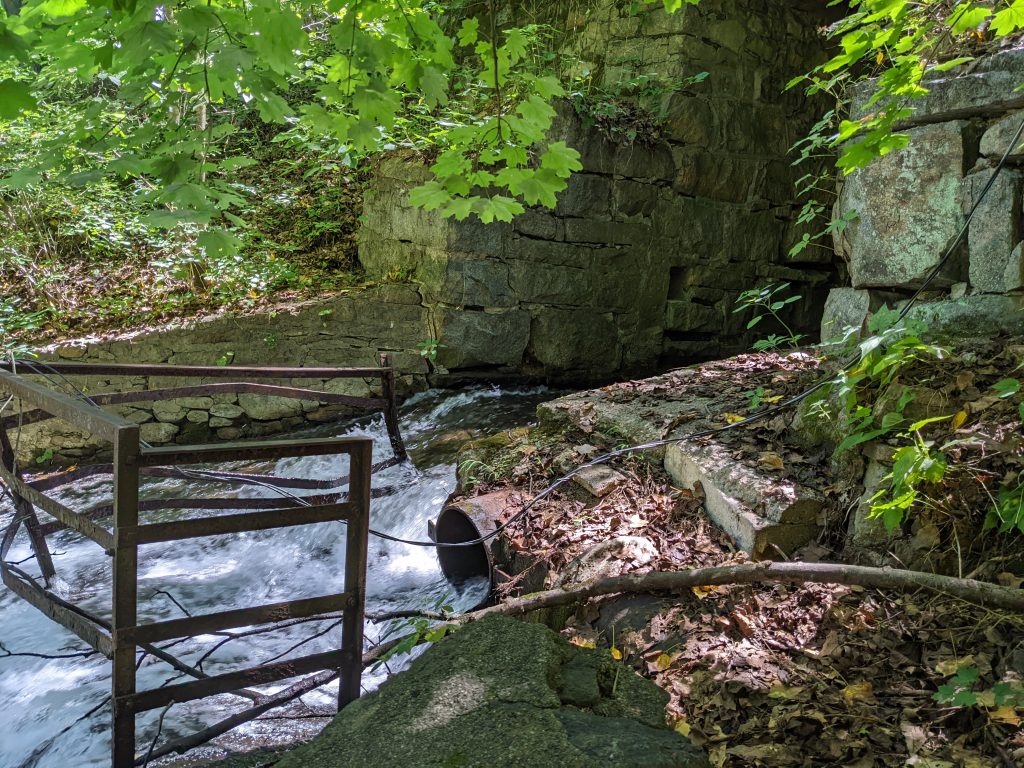 I passed the paper mill in the woods and found the old abandoned factory. 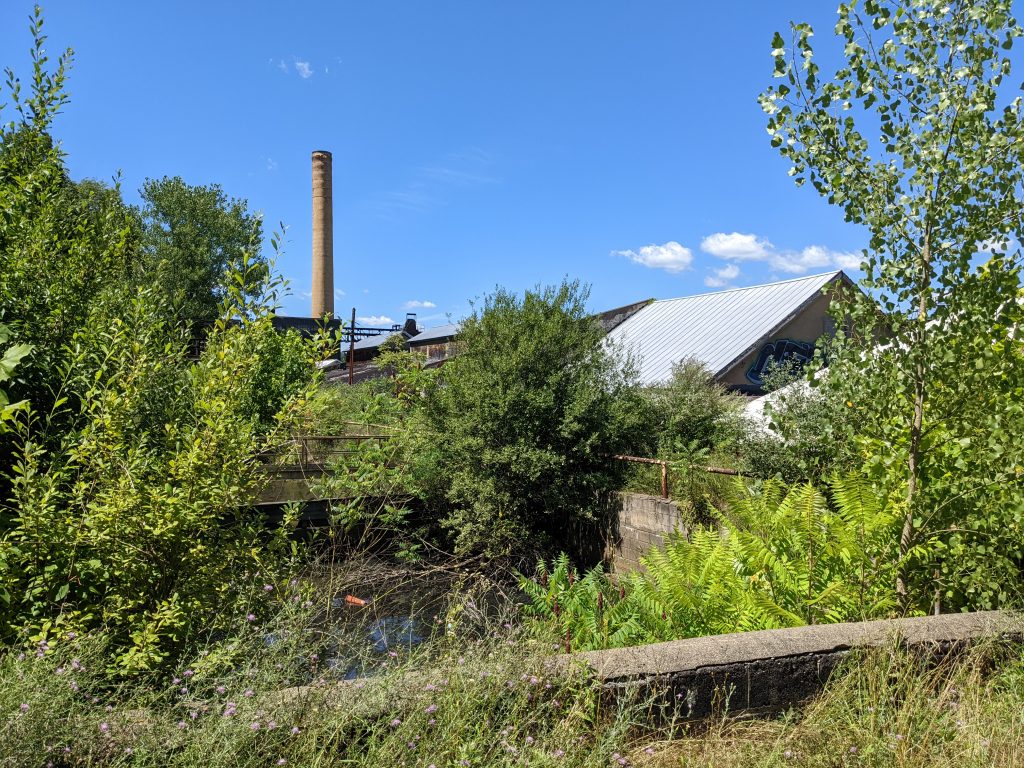 However, I was now off trail and needed to find my way back.  I found a small spur trail that looked like it would head back towards the trail to the car.  Sure enough, I found the trail I was looking for, but I had to cross an old rickety dam first in order to reach the marked trail. 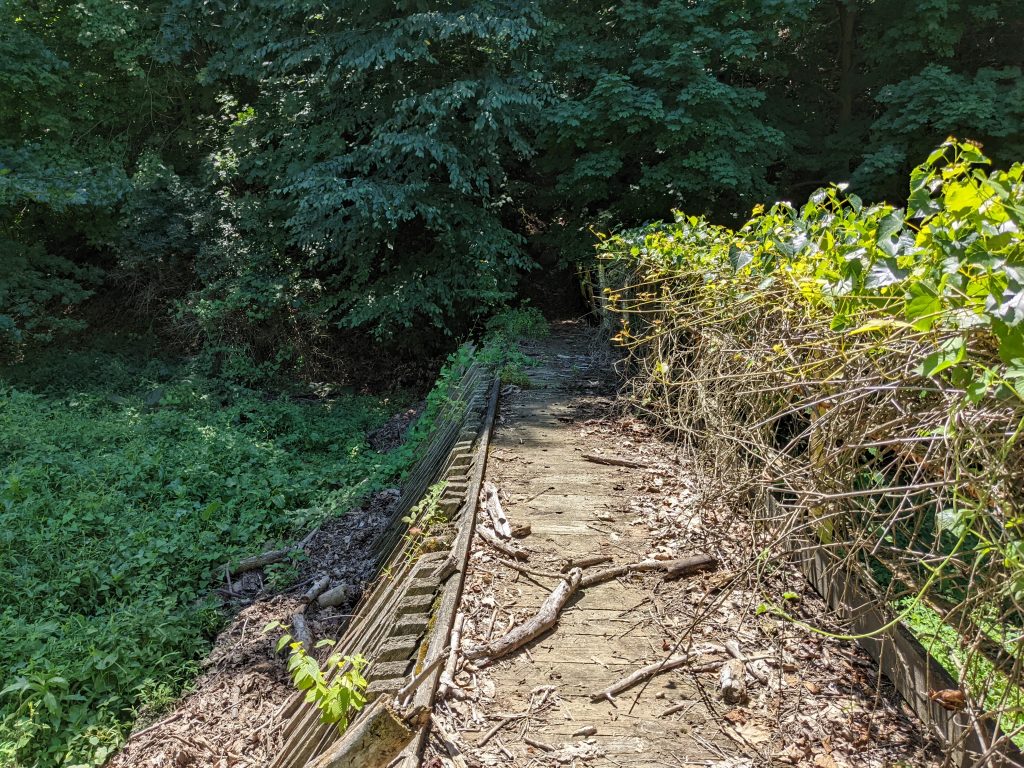 Eventually I found my way back to the car.  Coming back, I’m packing for swimming and sliding down the dam. 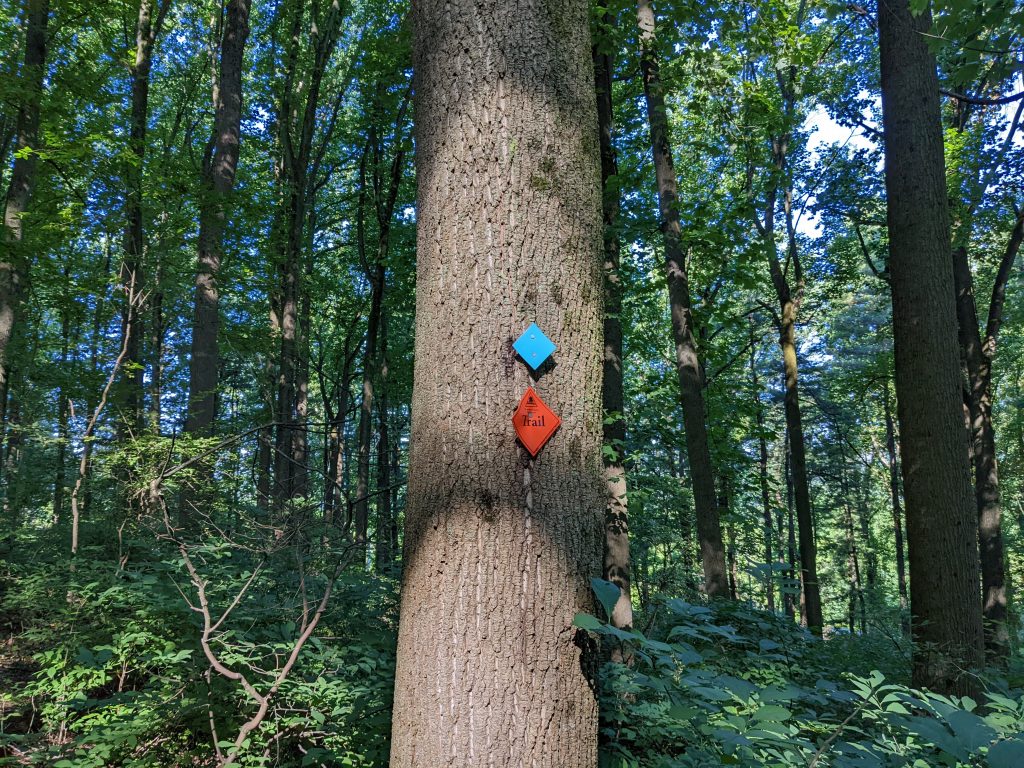 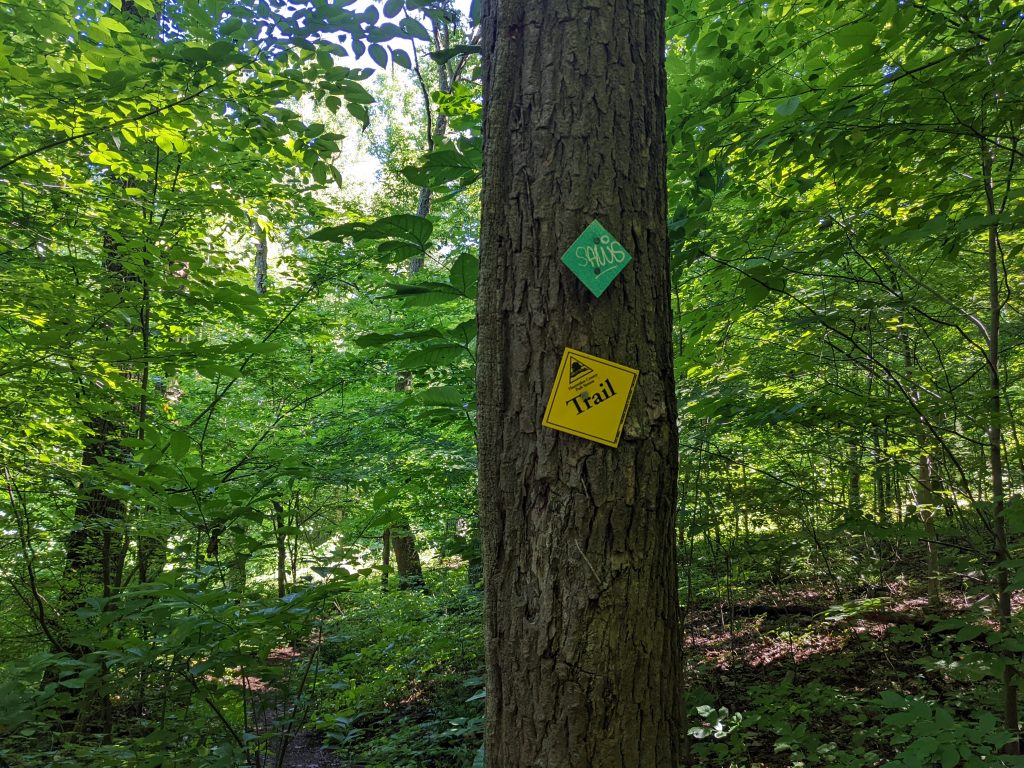 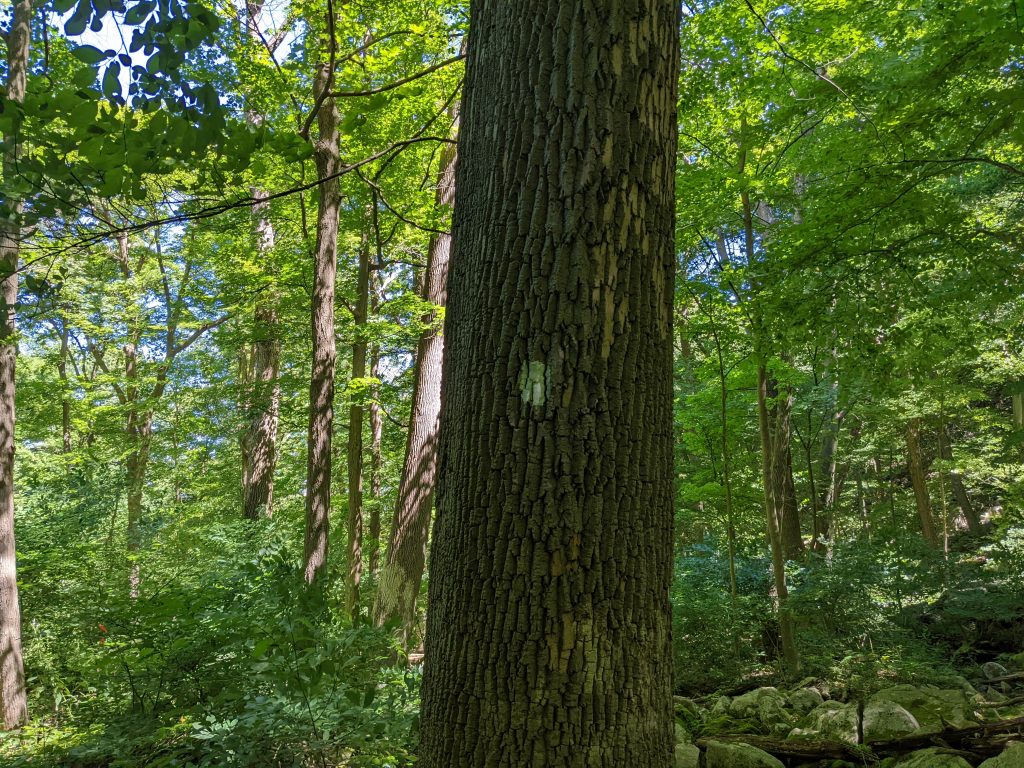 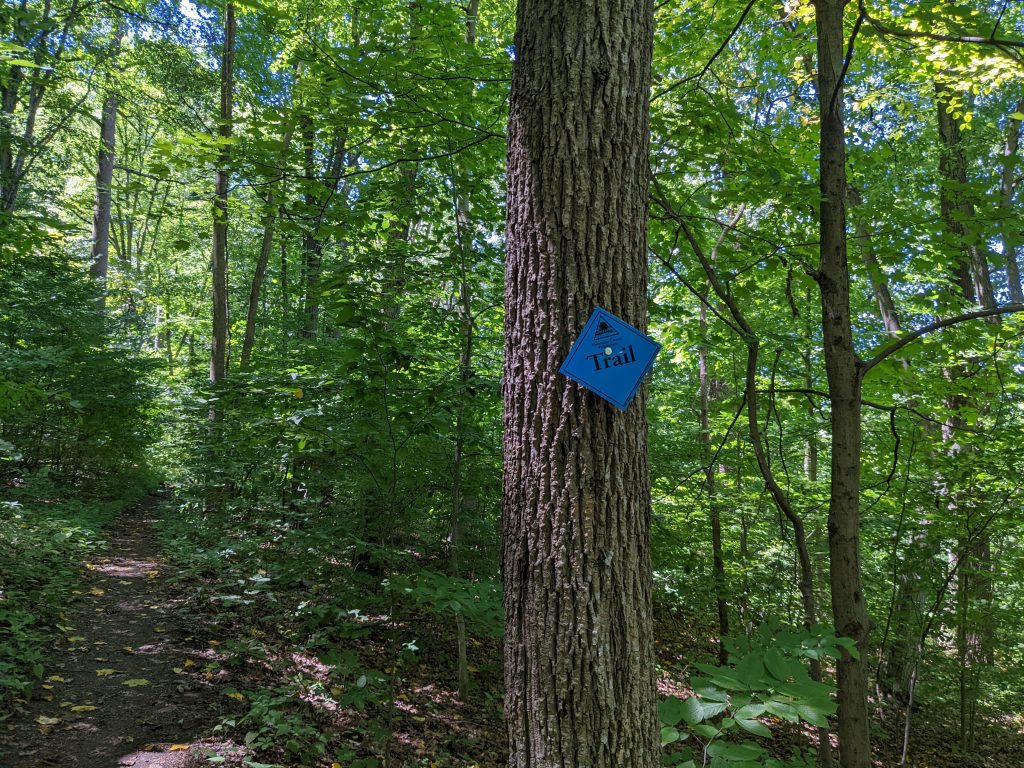