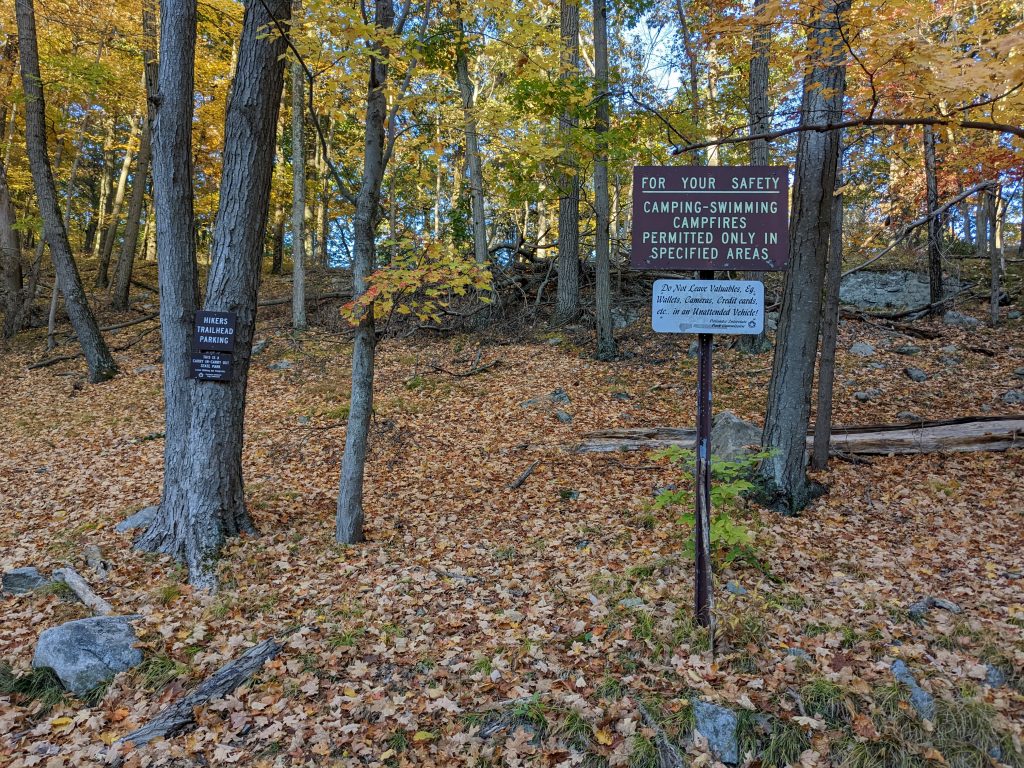 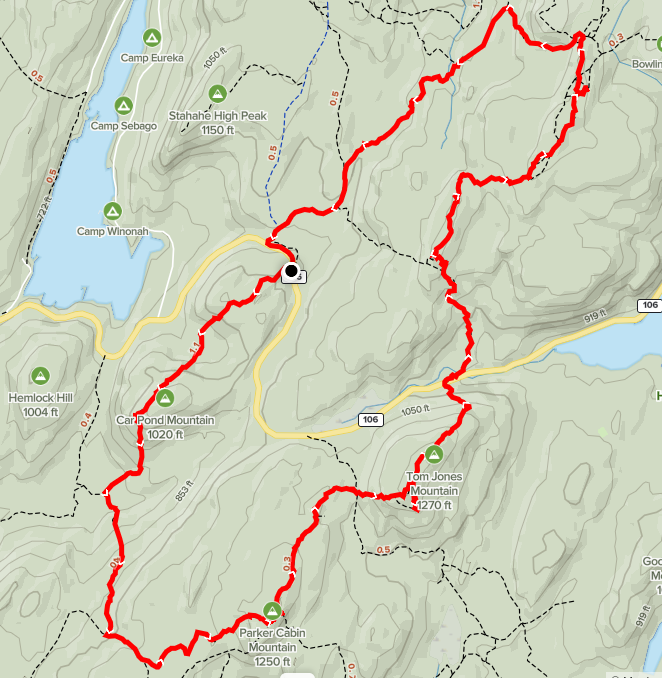 After getting clobbered by chiggers last week in the Pine Barrens, I thought I would return to the mountains.  Certainly, I thought the temperatures would have killed off most of the bugs.  It was 37 at the trailhead, though I passed through areas were it was down to 34.  And, with the sun out, the temperatures rose into the 50s making for a perfect day.  There were sporadic groups of hikers out, though I saw a scout troop heading up Tom Jones Mountain, likely making for the shelter.  And there was a scout troop at the Bold Rock shelter.

The hike starts by going up Car Pond Mountain from the parking lot. 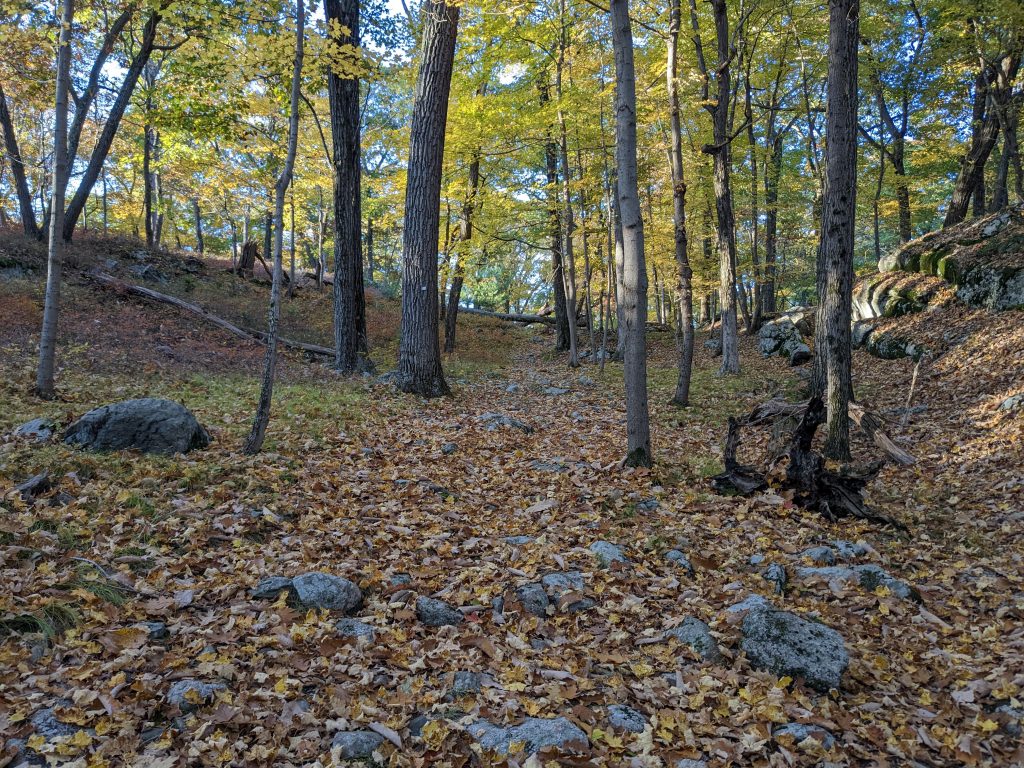 Then, there is a big descent that drops lower in altitude than the parking lot.  There is a nice view right off the back of Car Pond Mountain. 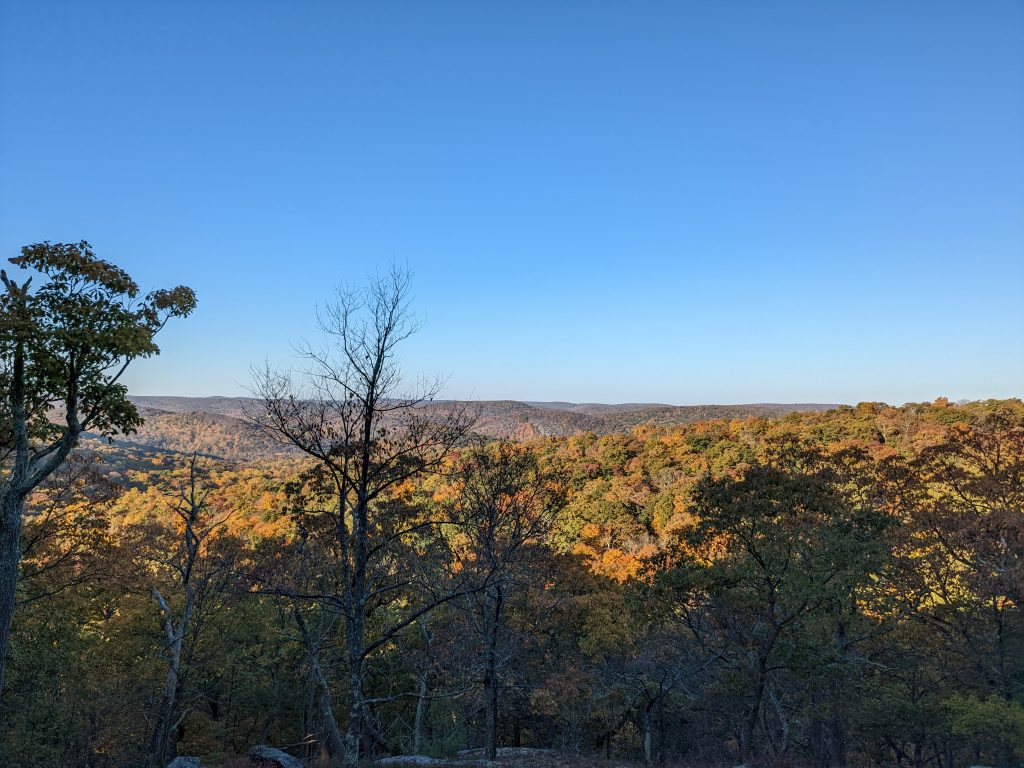 I took the Triangle trail east to head up Parker Cabin Mountain.  Right near the top was a solo hammock camper – he mentioned that it got near freezing at night.  At the top was brilliant sunshine.  (For the first part of the hike I was in the shade as the sun had not risen above the mountains.)  The view from the top of Parker Cabin is expansive. 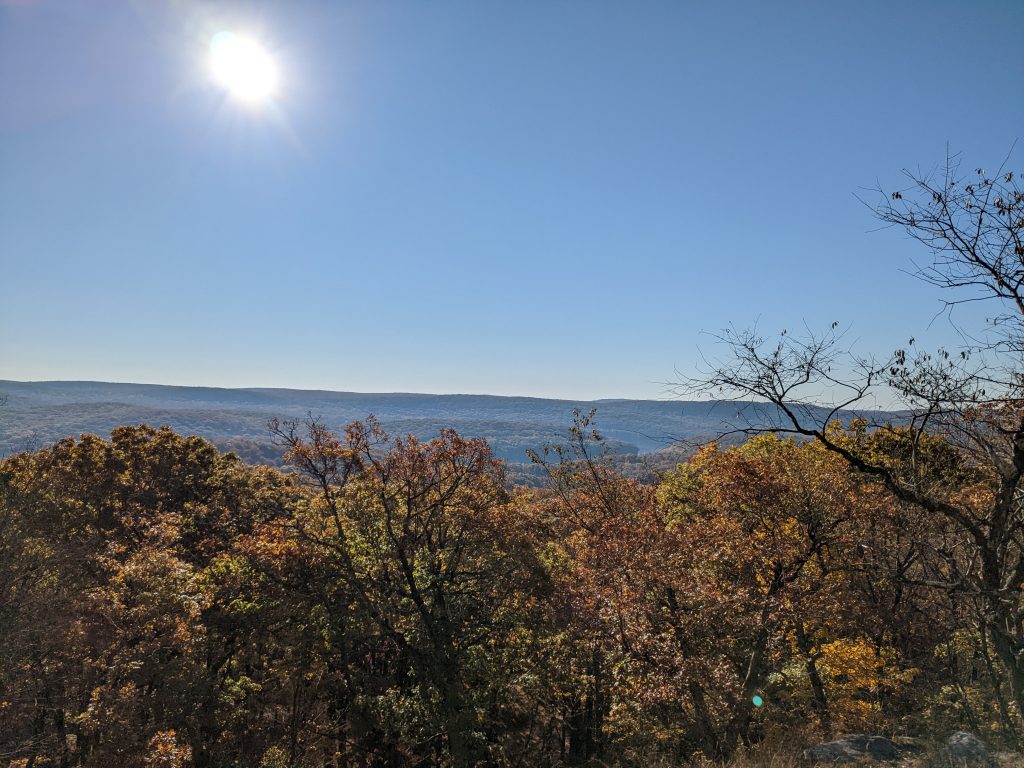 From here I took a jaunt over to Tom Jones Mountain.  Between each of the mountains was a descent, which meant an ascent to the next mountain.  Usually, the elevation gain was not too bad.

The Tom Jones Shelter is at the end of a spur trail off the top of Tom Jones Mountain.

The view from the shelter is pretty nice too. 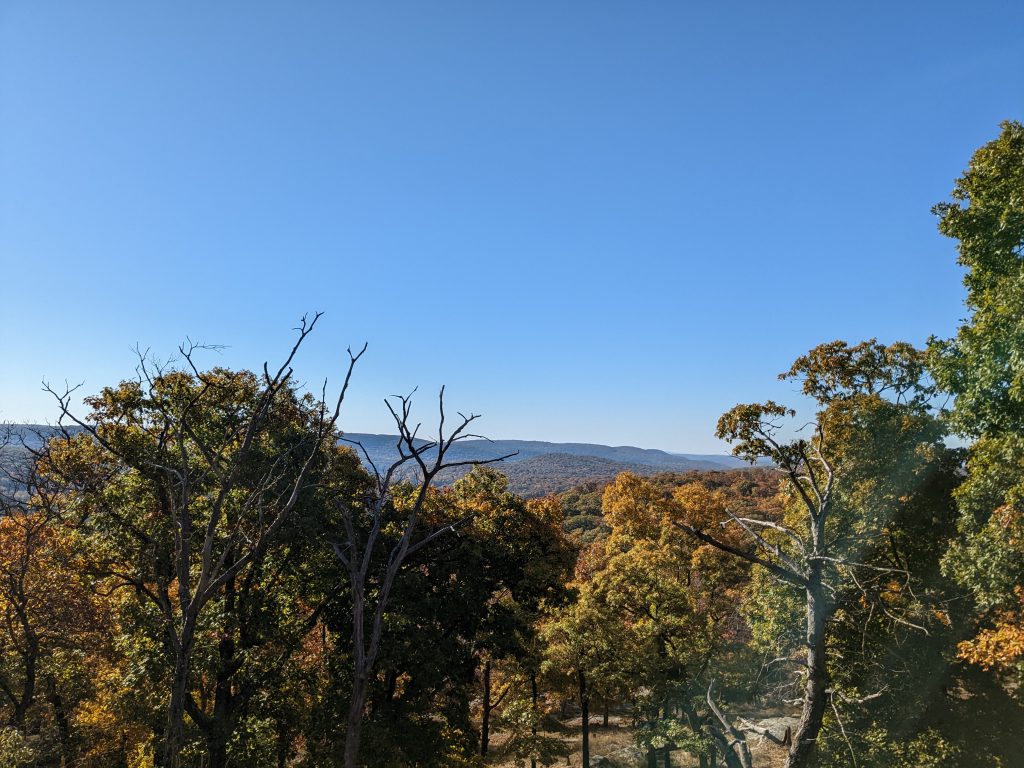 From there, I found the top of Tom Jones Mountain and had a snack.  The sun was pretty warm, and views were almost 360 degrees. 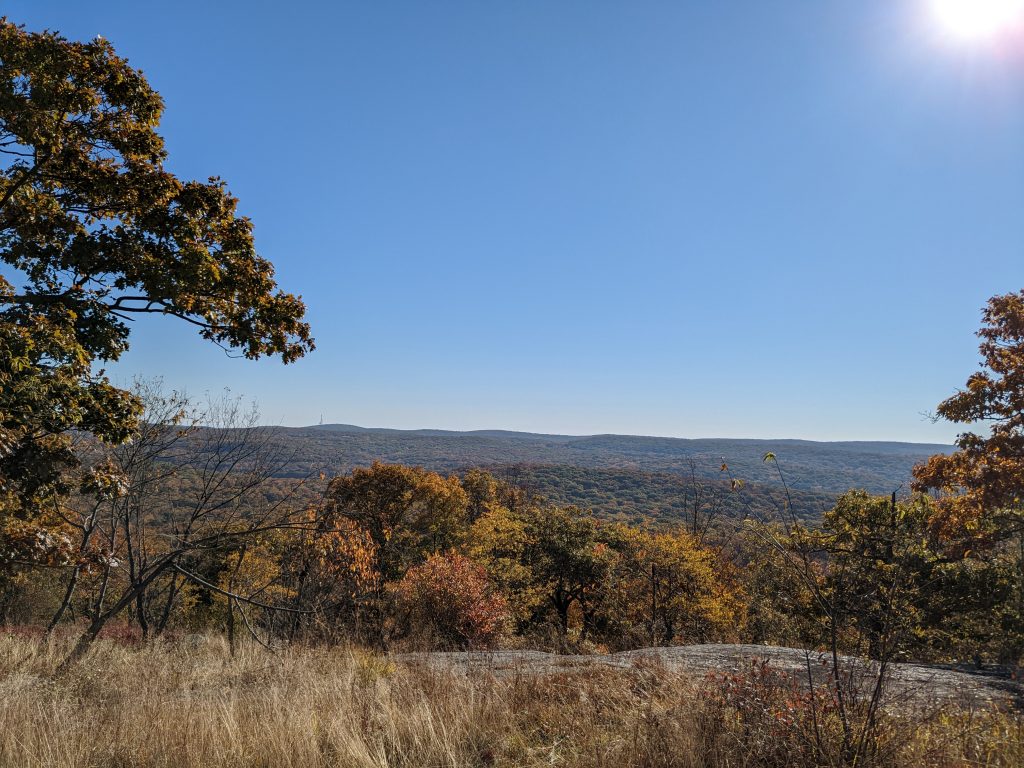 Walking across the top of Tom Jones mountain I could see where I was headed next, Black Rock Mountain.  This would be the only mountain where there would be significant elevation loss, and a climb back up.  The trail goes down to the road, then climbs back up Black Rock Mountain.  This picture sort shows the detail.  At the end of the rock, the trail drops down significantly.  In about a half hour, I would be standing at the top of the mountain in the center of the picture. 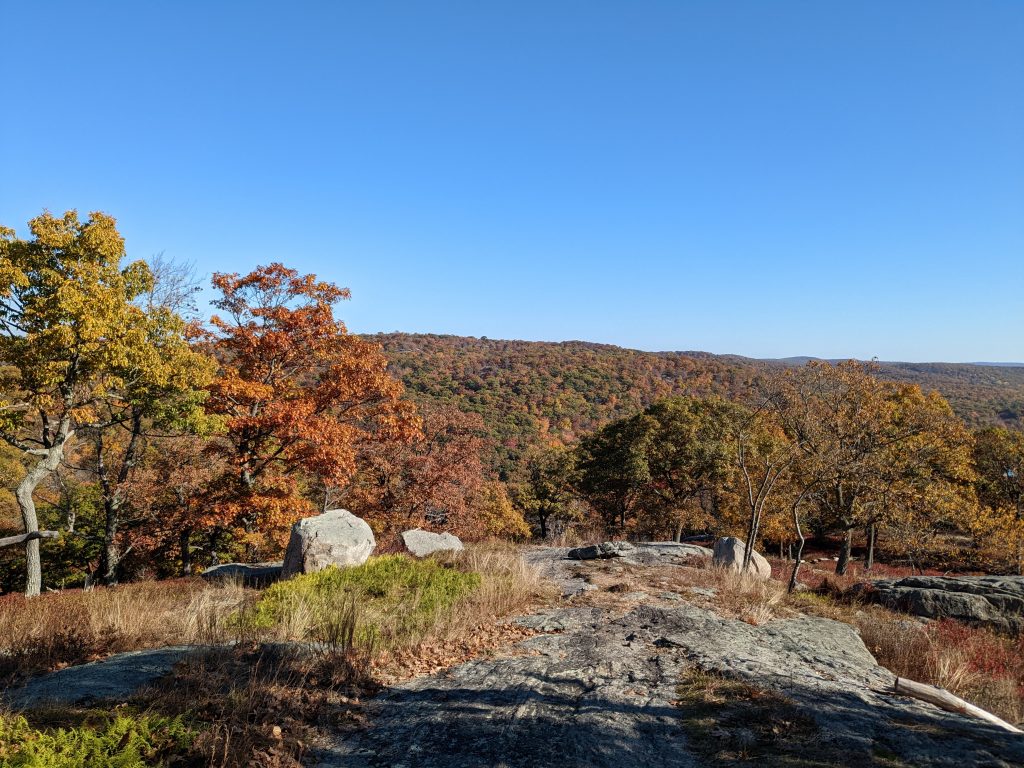 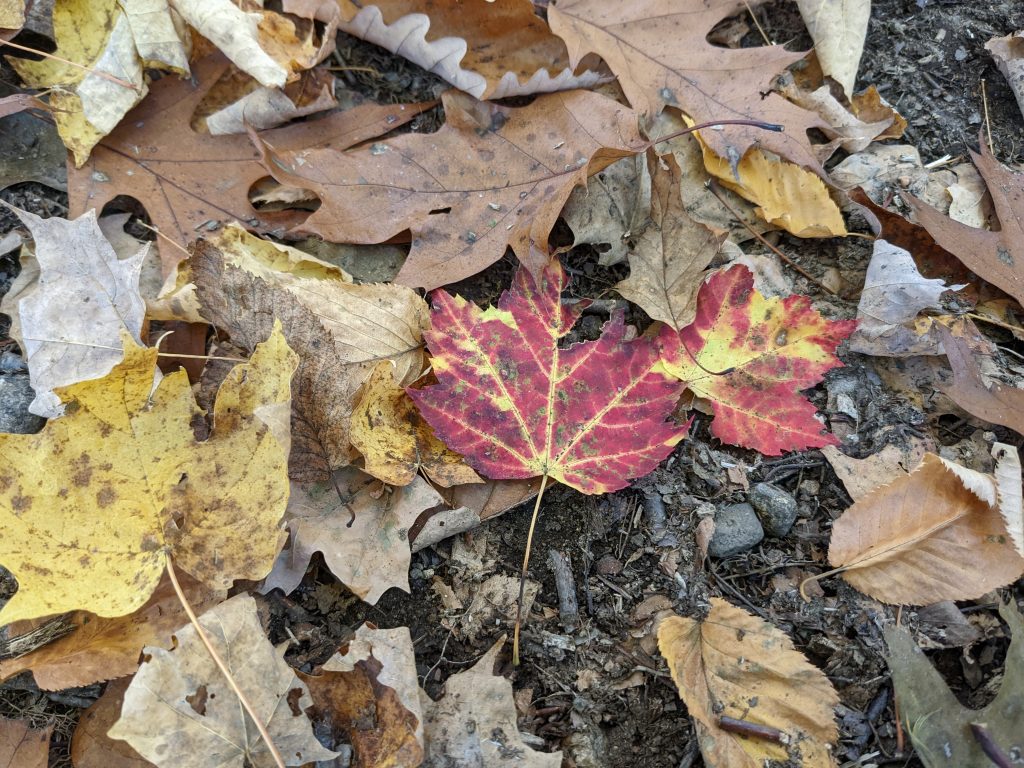 The climb up from the roadway is pretty steep in sections, with one or two rocks to scramble up.  At the top I reached my favorite viewpoint of the day, with 270 degrees of view. 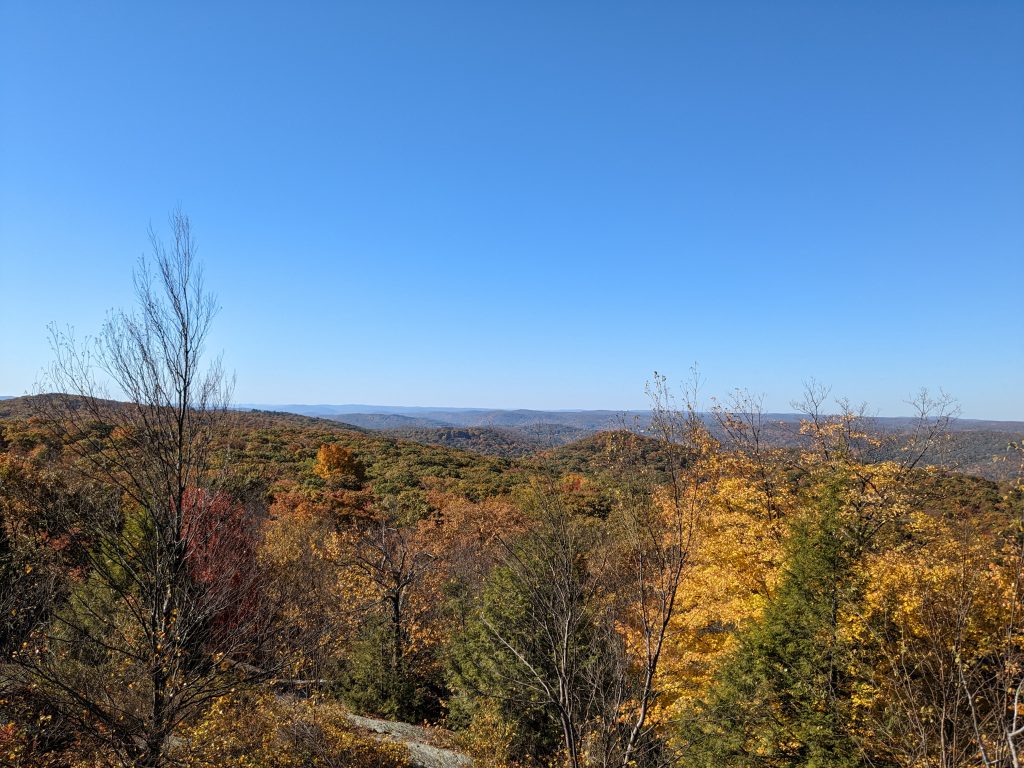 I took the long route.

Walking the top of Black Rock Mountain is walking mostly on exposed rock.  The Black Rock lookout is just as nice a view as the others.  This would be my highest point of elevation in the hike.  Most of the trail looks like this (until it heads back into the forest.) 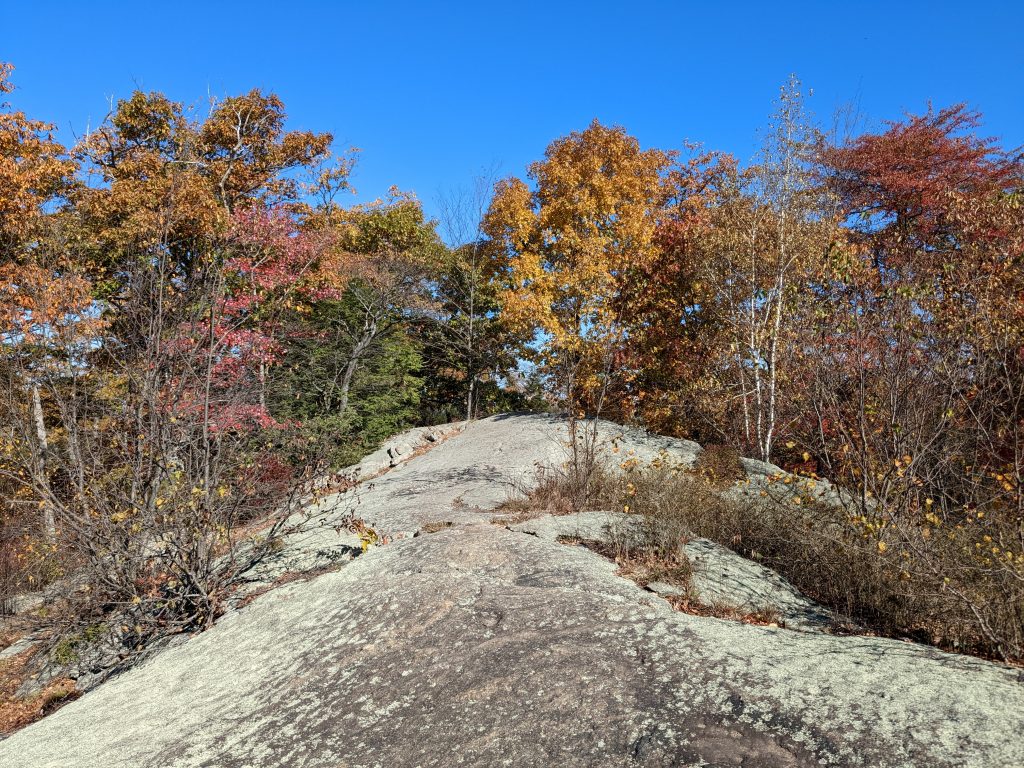 I found the Bold Rock shelter.  It appears to be the same size as the Tom Jones shelter, though doesn’t have a view right in front.  A short hike to the back leads to a view, that will be better when the leaves fall. 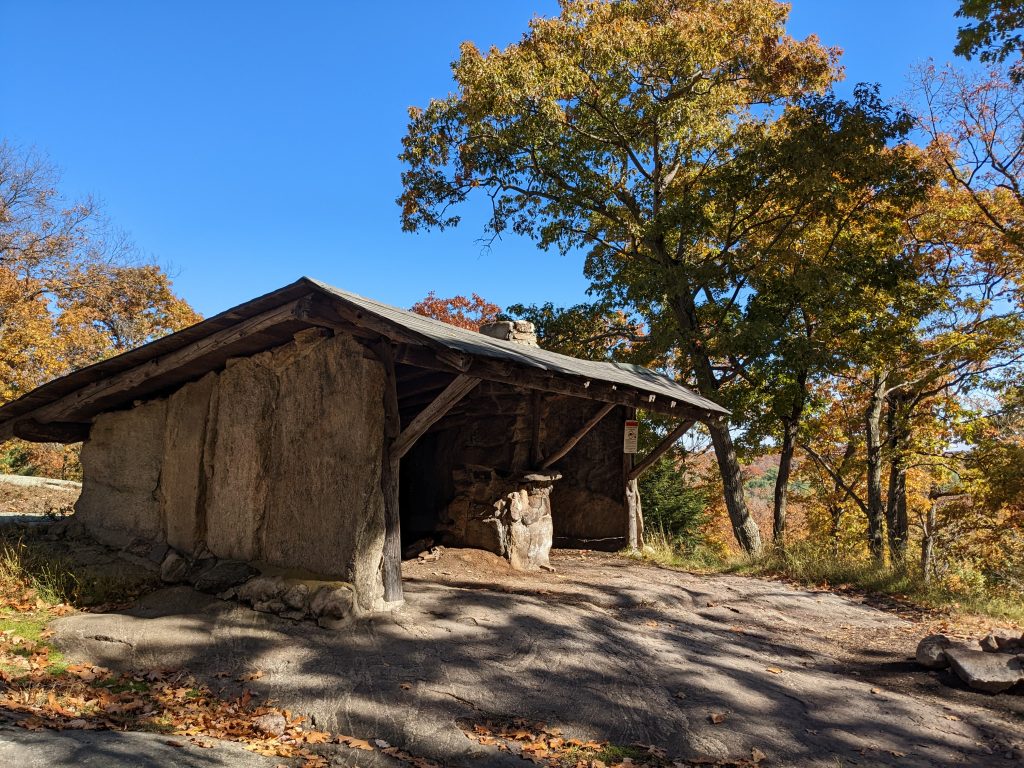 Here’s a shot of the bear hang.  There was a bear hang at the Tom Jones shelter too.  Apparently, bears have learned to check the shelters for food. 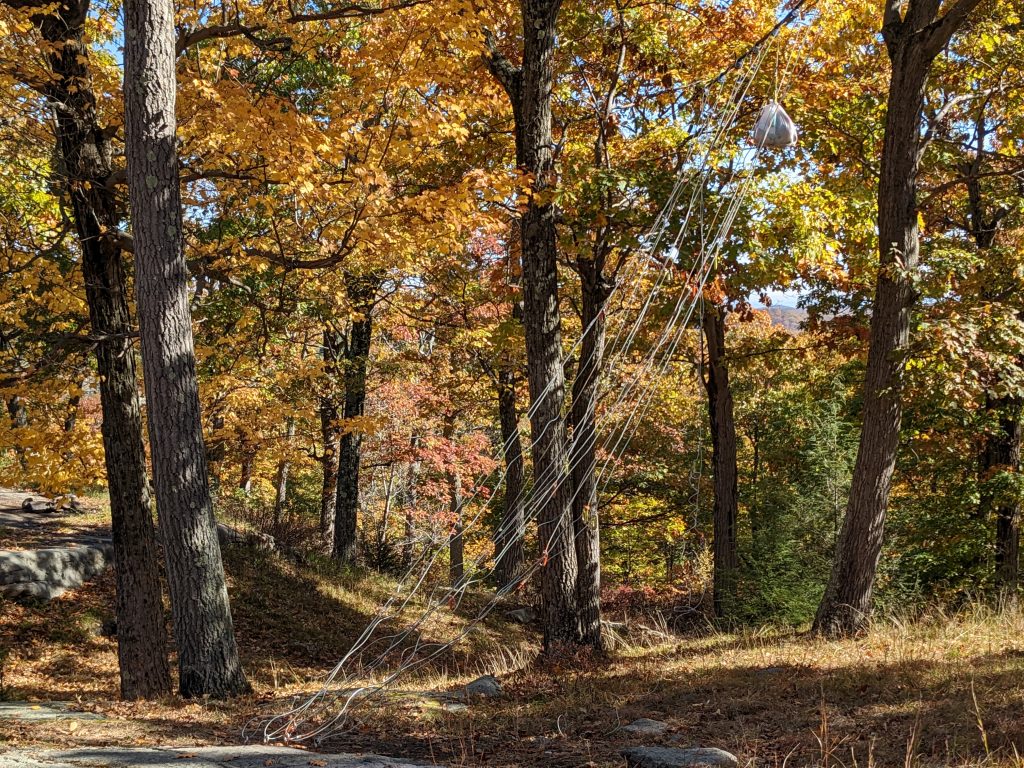 Behind the shelter a scout troop was setting up camp.  And closer to the view, there were others that had pitched tents.  It would be busy at this shelter tonight.

Many many years ago I backpacked in the snow in Harriman, and we stayed at a bigger shelter.  I remember all of us fitting in the shelter, so it could not have been either of these two.

I picked a good weekend, the colors were out.  I’m not sure it is peak, but there were spots of vibrant colors all around. 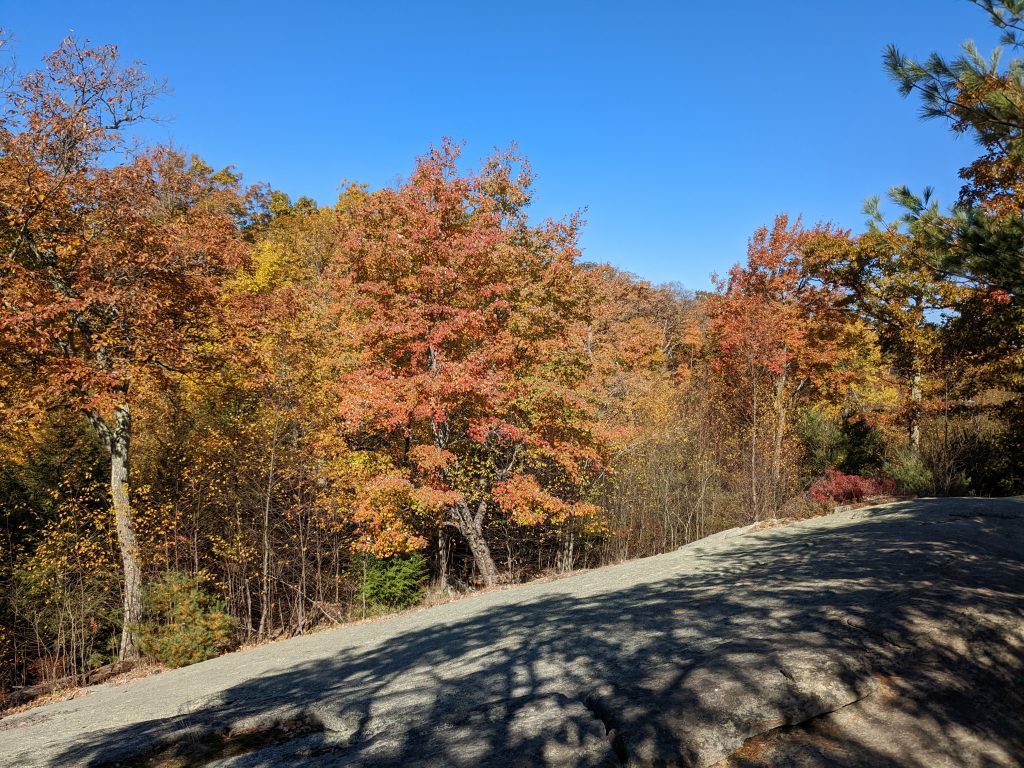 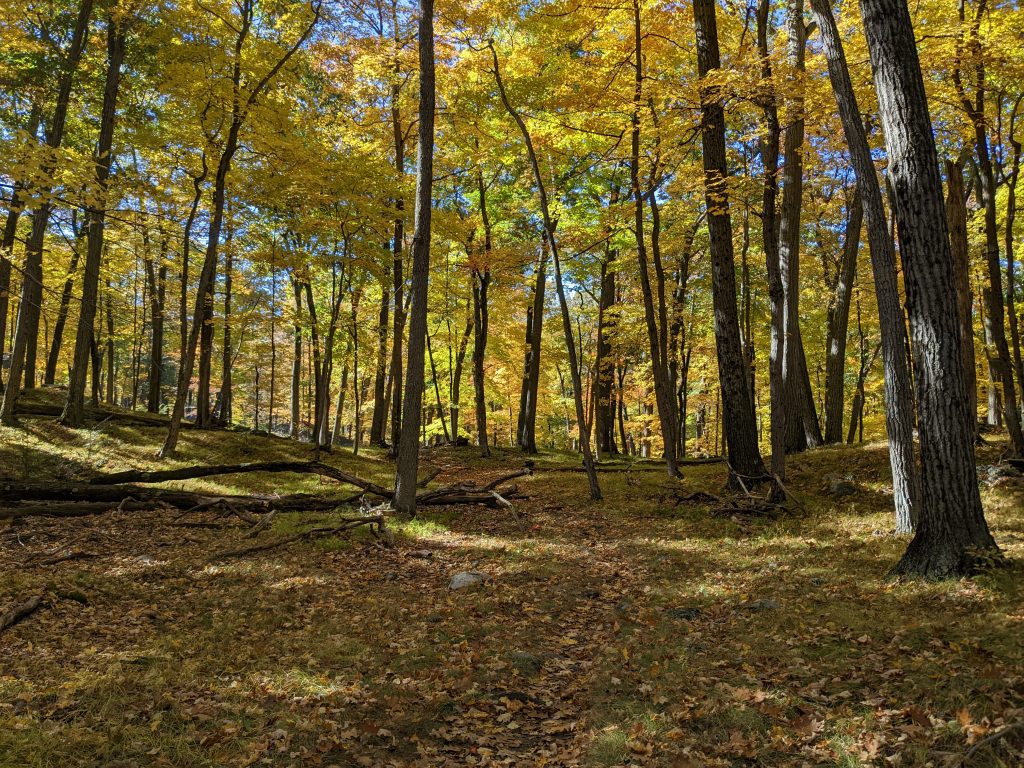 Compare the views from two weeks ago to get a good idea of how the color has changed. 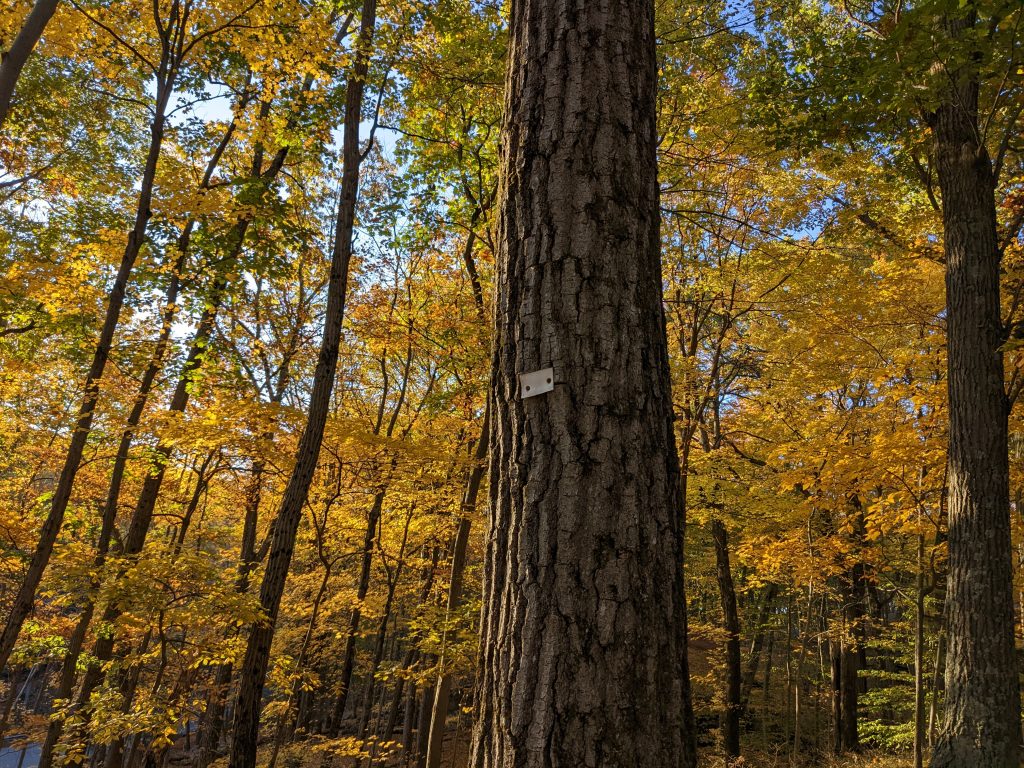 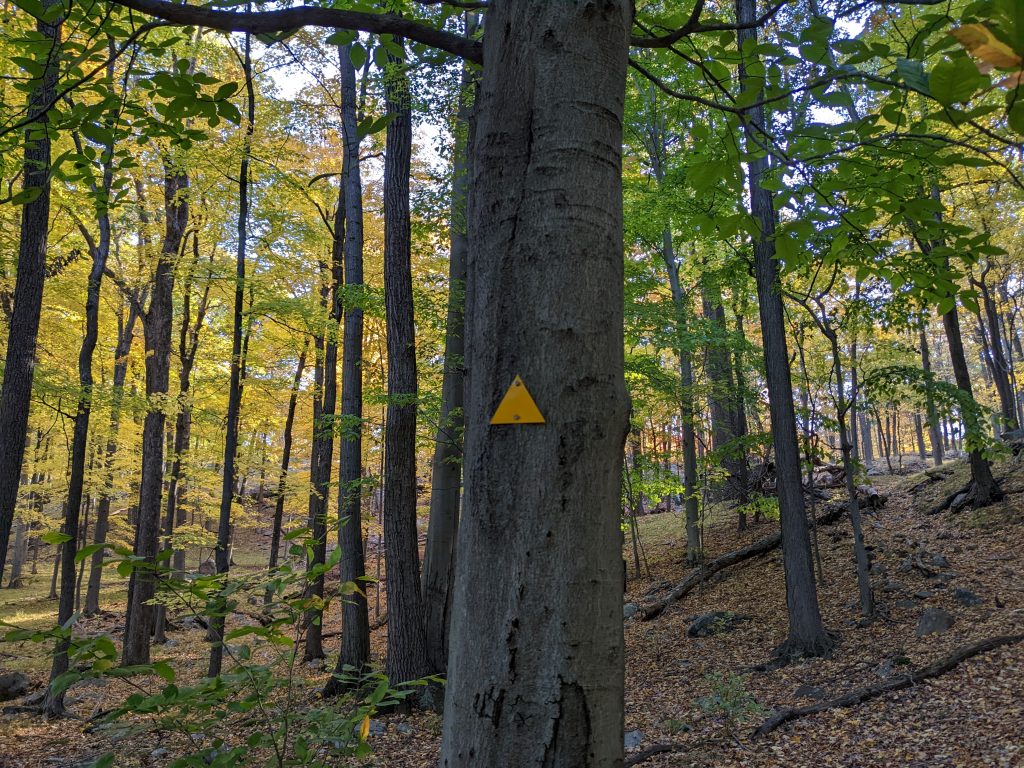 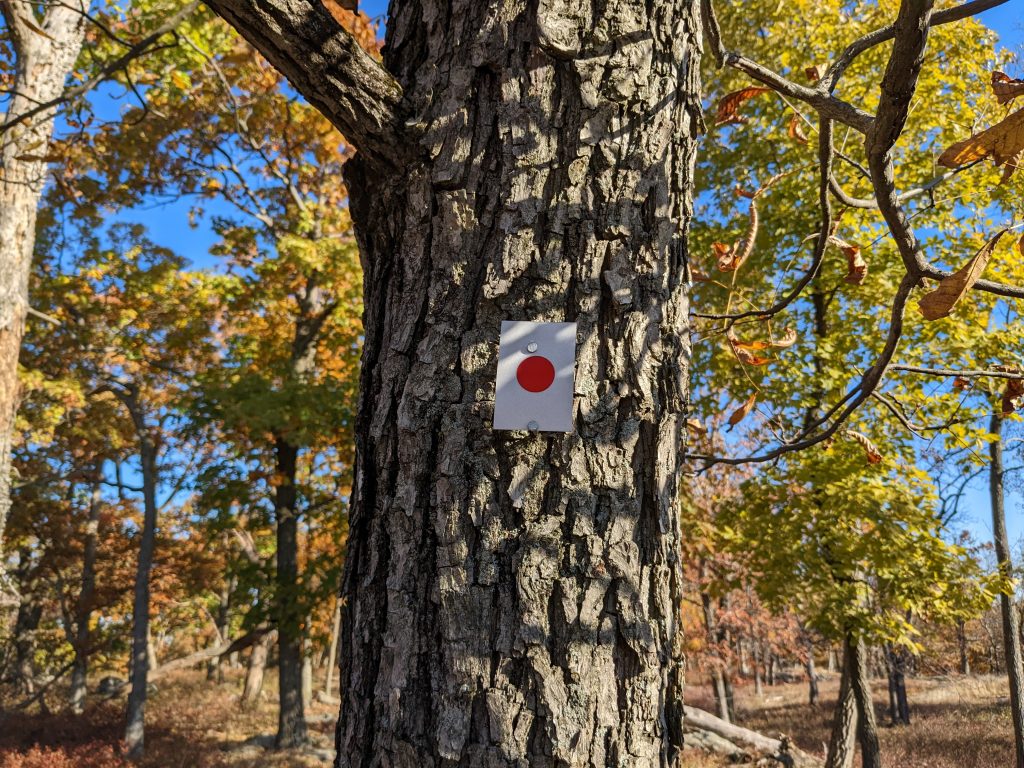 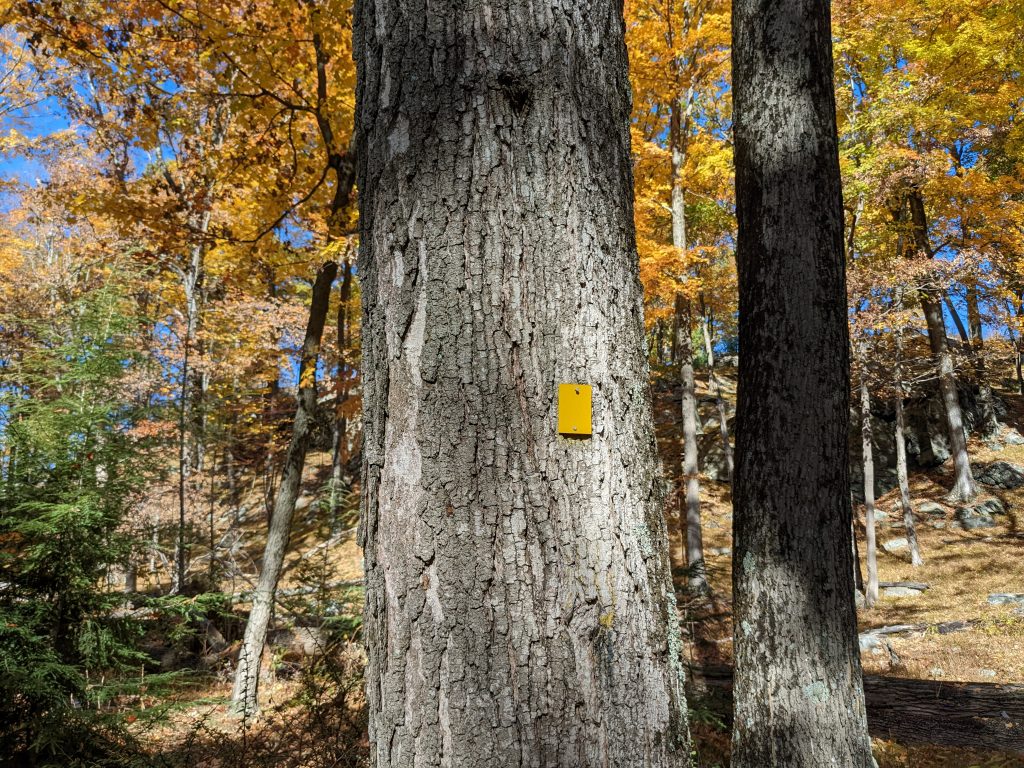