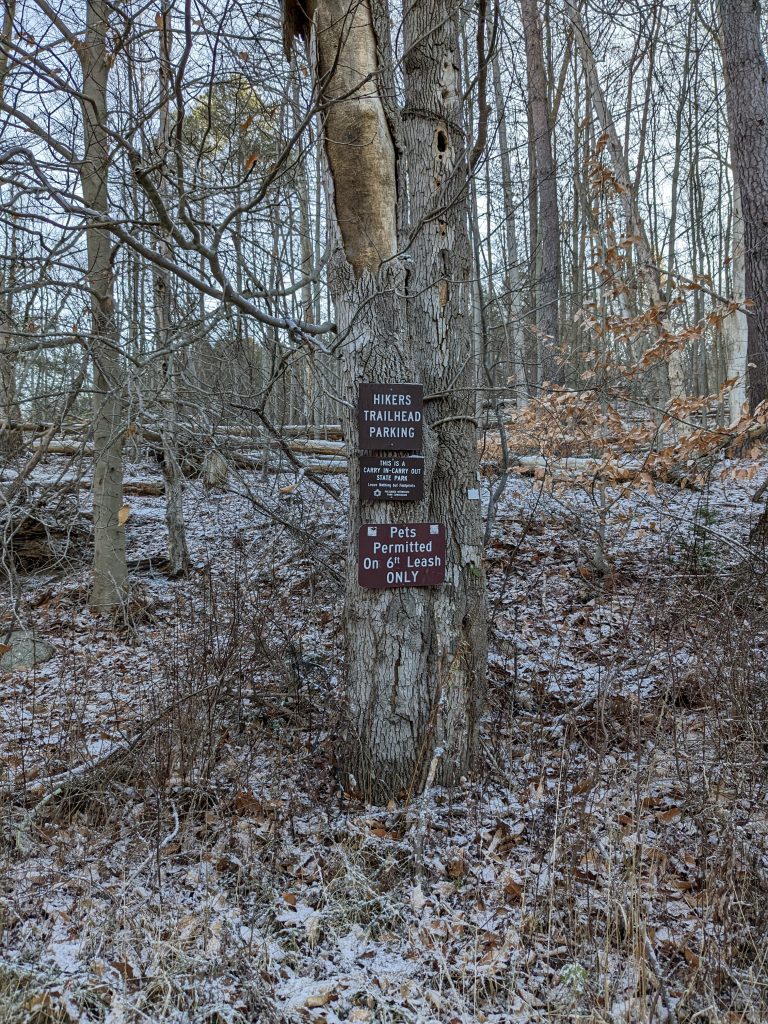 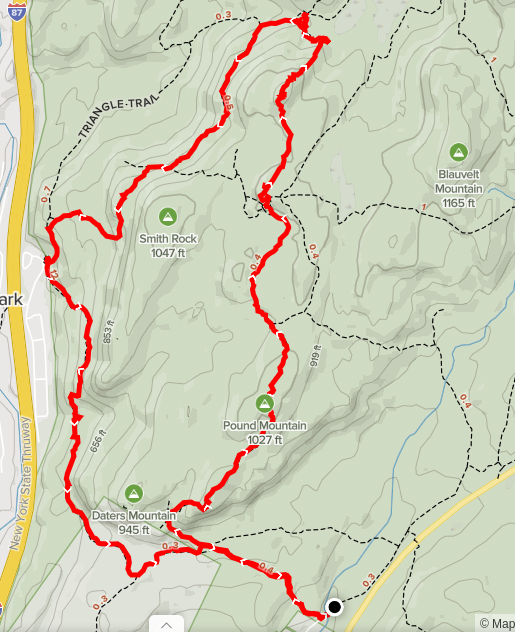 It was 22 degrees at the trailhead.  I hadn’t been out in over a week due to rain, and I have re-hiked some trails over the past couple of weeks.  I wanted to get back into Harriman.  While it rained at home the night before, I did not consider the amount of snow that would be on the ground in the park.  This fact may, or may not, play into the hike.  None the less, I started with hat, gloves and jacket over the fleece.  In the shade, it remained cold; however the sun felt great.

Snow was still on the ground, and did not disappear until the sun was high overhead and above the surrounding mountains. I started out on the Blue Disc trail. 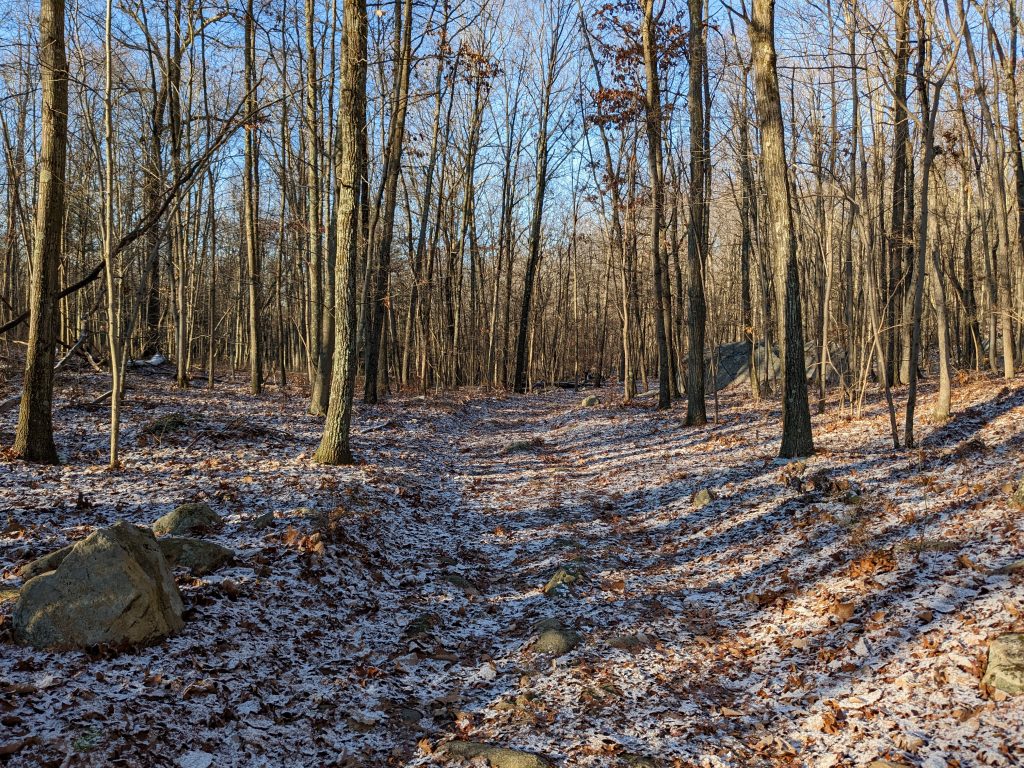 The first stop of the day was Almost Perpendicular, a rock scramble to a cliff.  There’s nothing like scrambling before 9:00 in the morning. 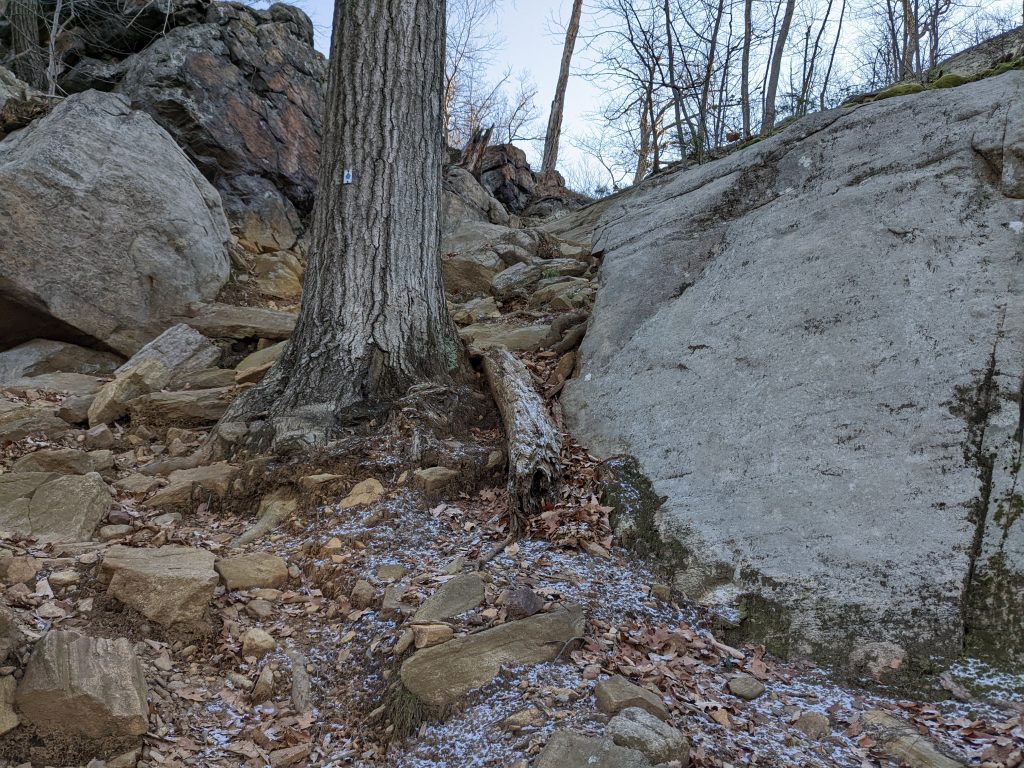 The views, though, were spectacular. 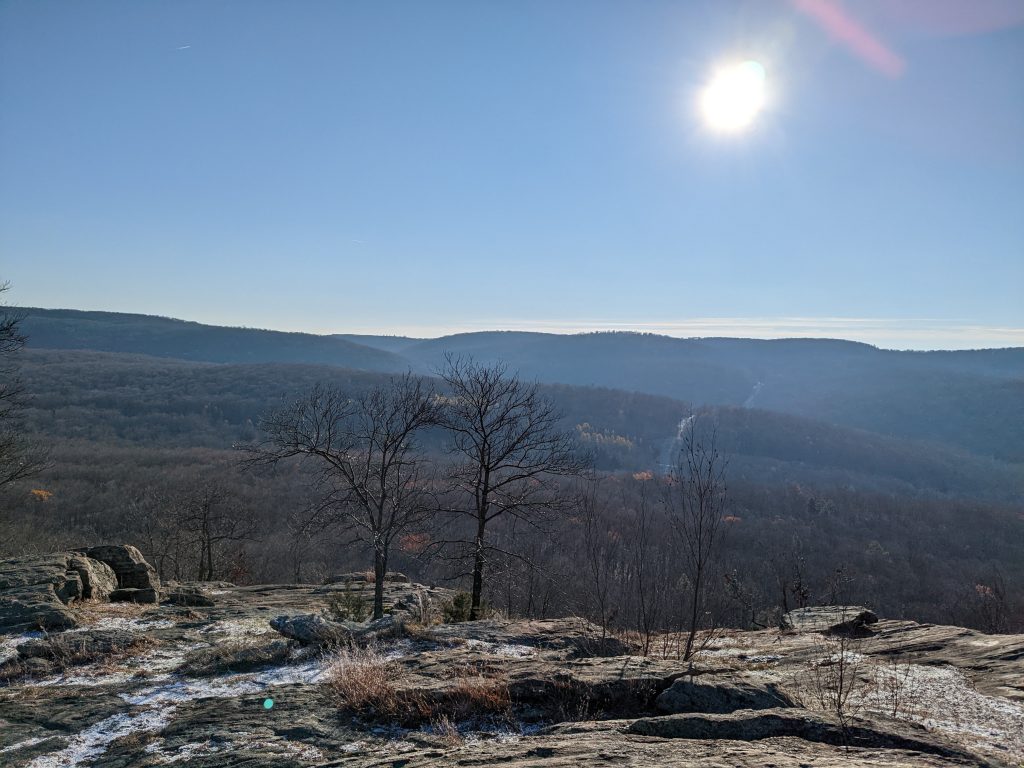 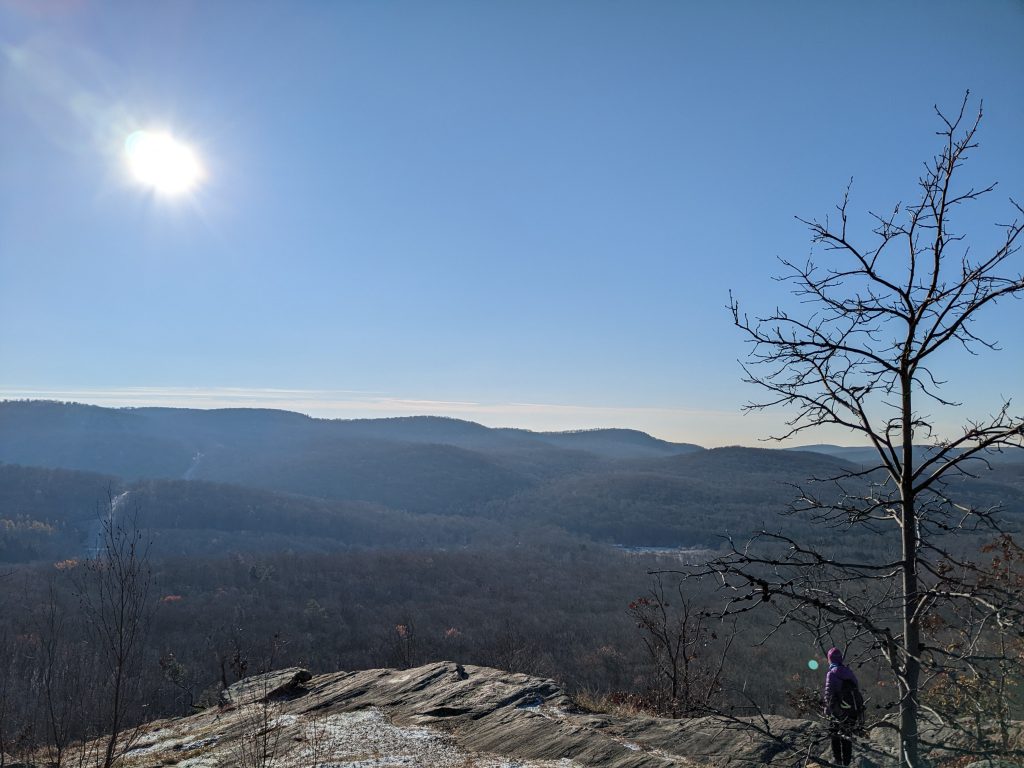 The Reeves Meadow Visitor Center can be seen in the distance.  It’s (relatively) empty in this picture, I’m sure it was a madhouse later in the day. 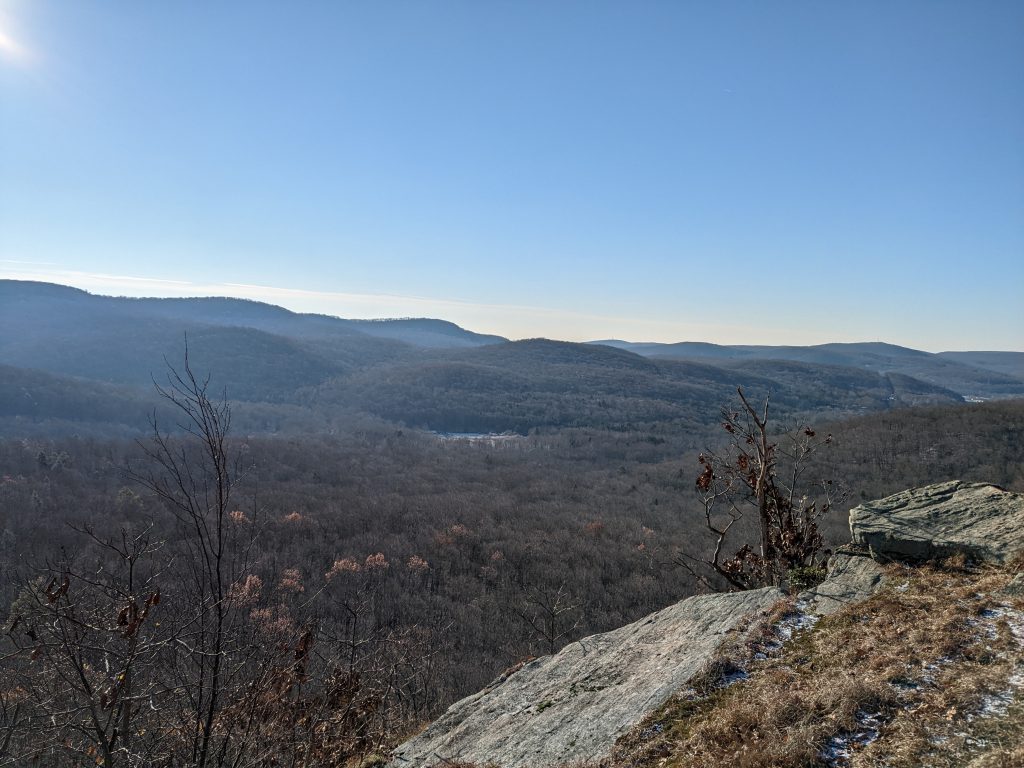 Lots of Needle Ice, and it made a crunching sound when walking on it. 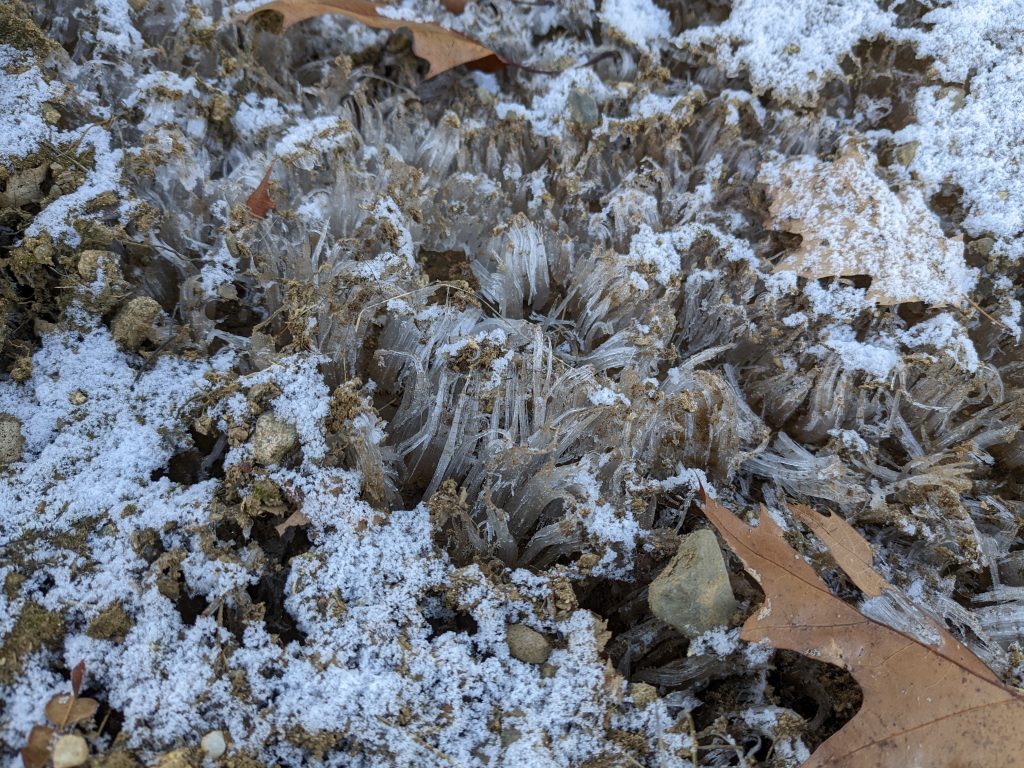 After Almost Perpendicular, it was a fairly level walk until Elbow Brush.  There was lots of icicles and melting snow on  Elbow Brush. 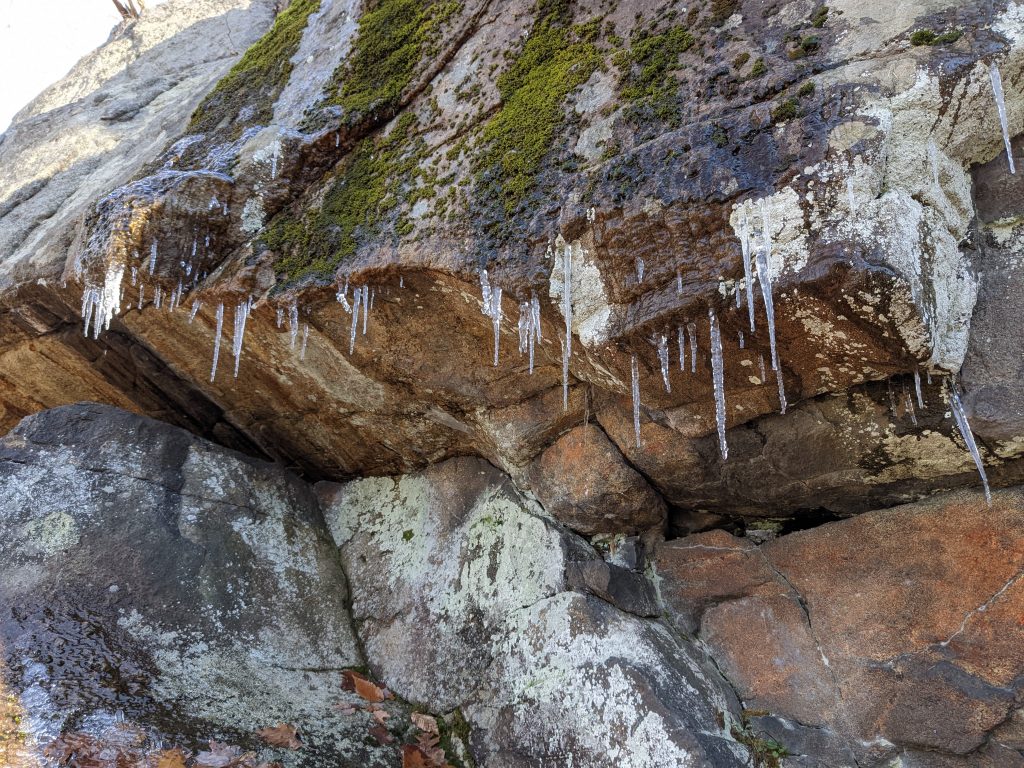 I liked Elbow Brush, it’s similar to the Lemon Squeezer, further to the north.  Here’s a picture looking into the rocks.  It’s not the best picture due to the position of the sun.  Ultimately, you enter where the middle shadow falls. 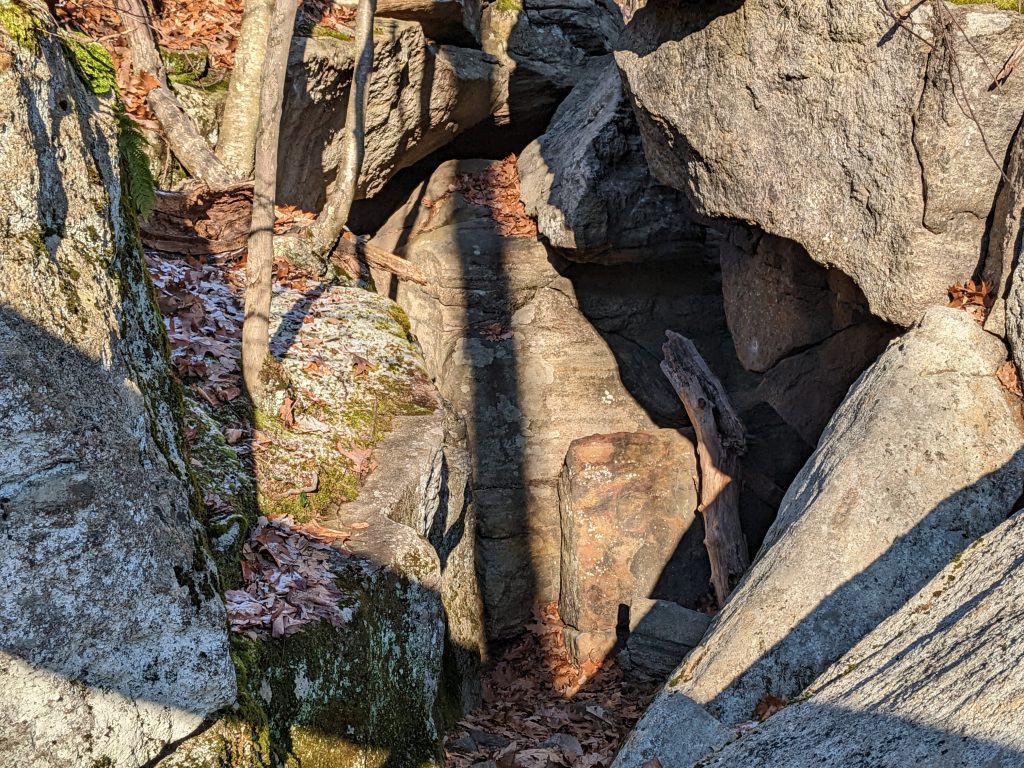 After Elbow Brush, the trail heads to Claudius Smith Den. While rounding a curve I almost ran into this guy. 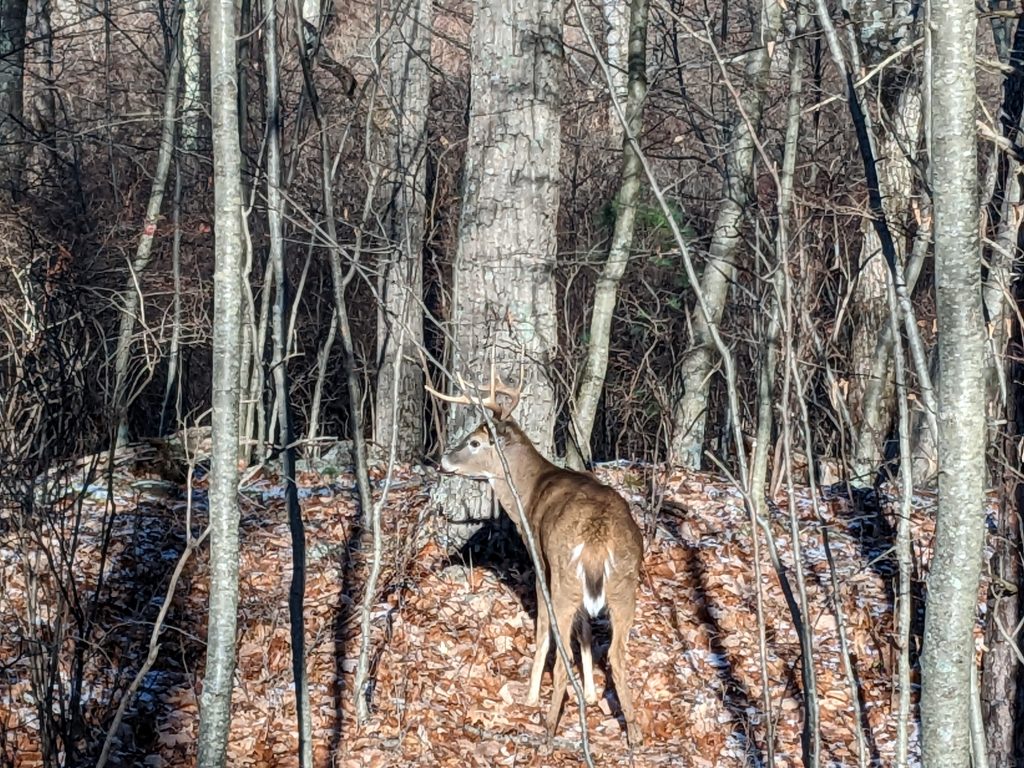 The Blue Disc trail junctions with the Tuxedo-Mt. Ivy trail at Claudius Smith Den.  Claudius Smith Den is allegedly where the outlaw Smith and his gang hid out during the Revolutionary War.  There is a cave a short way down the Tuxedo-Mt. Ivy trail, but I did not investigate.  There was a group that was camping (probably right in front of the cave) – and probably illegally – and I did not want any part of it.  If I do the hike again, I’ll go to the cave.  Here’s a shot of the rocks.  I scrambled to the top using the Blue Disc Trail. 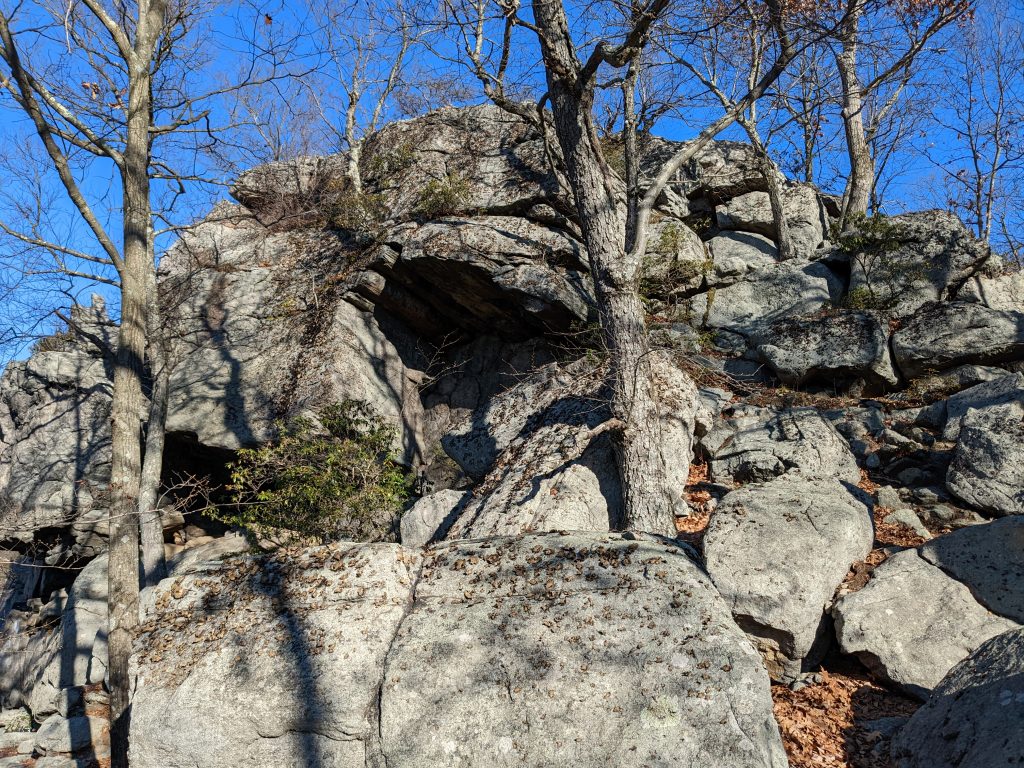 The view from the top: 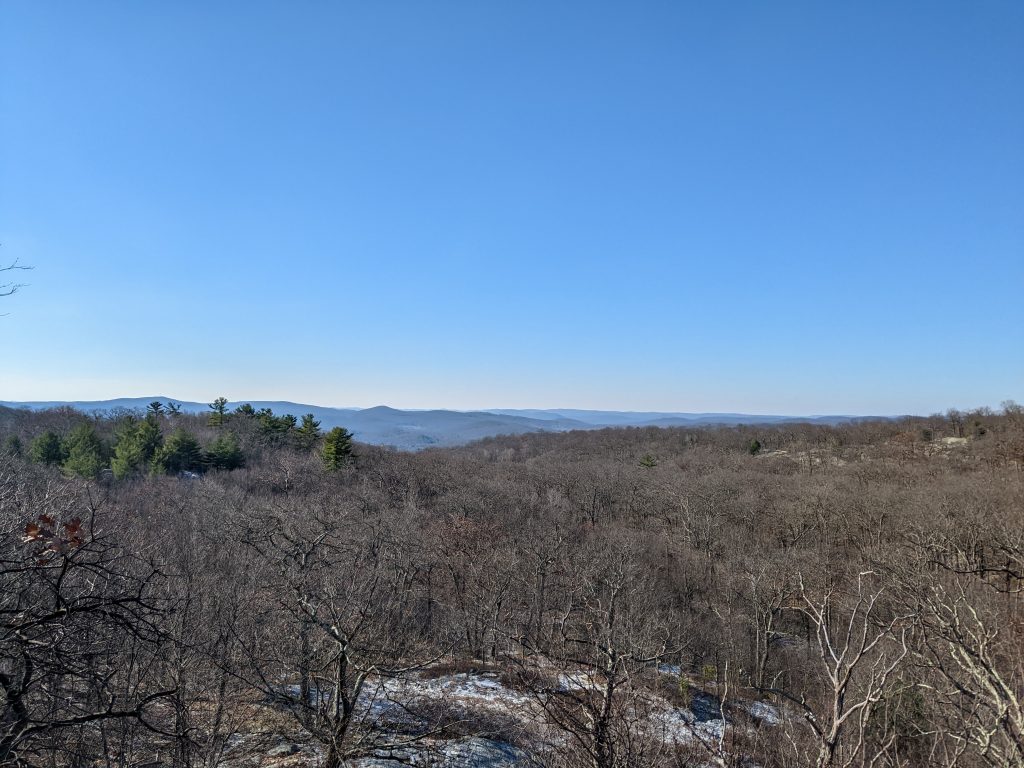 And here’s where I get in trouble.

At the top I stopped to talk with a group of women – we had been leapfrogging each other since the parking lot.  They were taking the Tuxedo-Mt. Ivy trail to the right for a more gentle trip back to the car.  Originally, I had planned on the Tuxedo-Mt. Ivy trail to the left, but looking at the map, that would get me back to the car in about an hour.  Too short.  Looking at the map, I could finish the Blue Disc trail then come back down the Ramapo-Dunderberg and add about another mile and a half.  That felt right.  The women at the top were not going to risk the downhill (off Big Pine Hill) but mentioned that since I had trekking poles, it “shouldn’t be that bad.”  Shouldn’t be that bad?  I’ve always gotten in trouble when I extend or change my plans.

Side note:  I am in the middle of reading Harriman Trails, by William J. Myles and Daniel Chazin.  If you have ever read the trail descriptions on the NY NJ Trail Conference page, they were likely written by Daniel Chazin.  The book is excellent (I highly recommend) but it is more a guide and historical reference.  Do not get the book thinking it will help plan routes.  It can add color, but it is not for planning.  It has an excellent history of the trails, roads, lakes that make up Harriman and Bear Mountain state parks.  Sure, there are trail descriptions, but there is so much more.  The following sentence concerning the Blue Disk trail stands out to me:  “Blue Disc now descends steadily, for much of the way over bare, sloping rocks that are often slippery in winter.”  I don’t know how I missed that, or didn’t retain it when I read it.

Here’s a shot looking off the back of Big Pine Hill, with Black Ash Swamp in the center.  This is before the downhill.  The swamp is right behind the bare tree in the center of the picture. 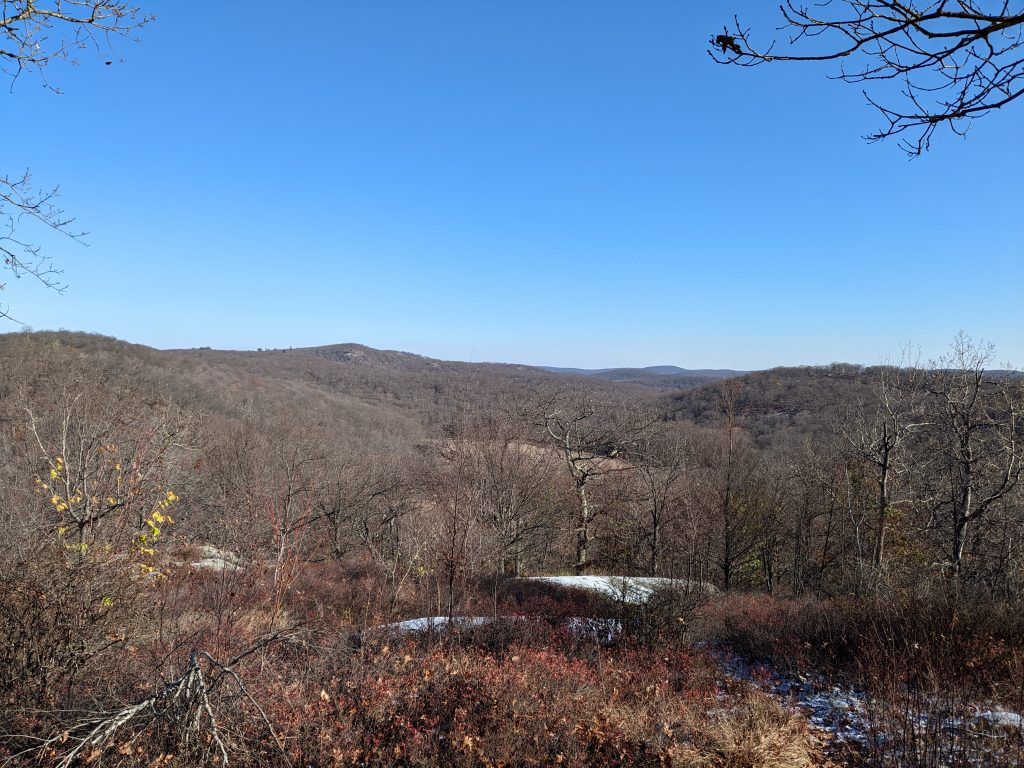 You’ll notice there is still snow on the ground.  And those rocks?  They were slippery.  Many coated with ice.  The leaves didn’t help.  In the summer, this is a great downhill.  Snow covered?  Not so much.  It was here that I remembered why I tend to head south during the colder months, to avoid this situation.  I have microspikes on the way.

The trail comes to the southern end of Black Ash Swamp. 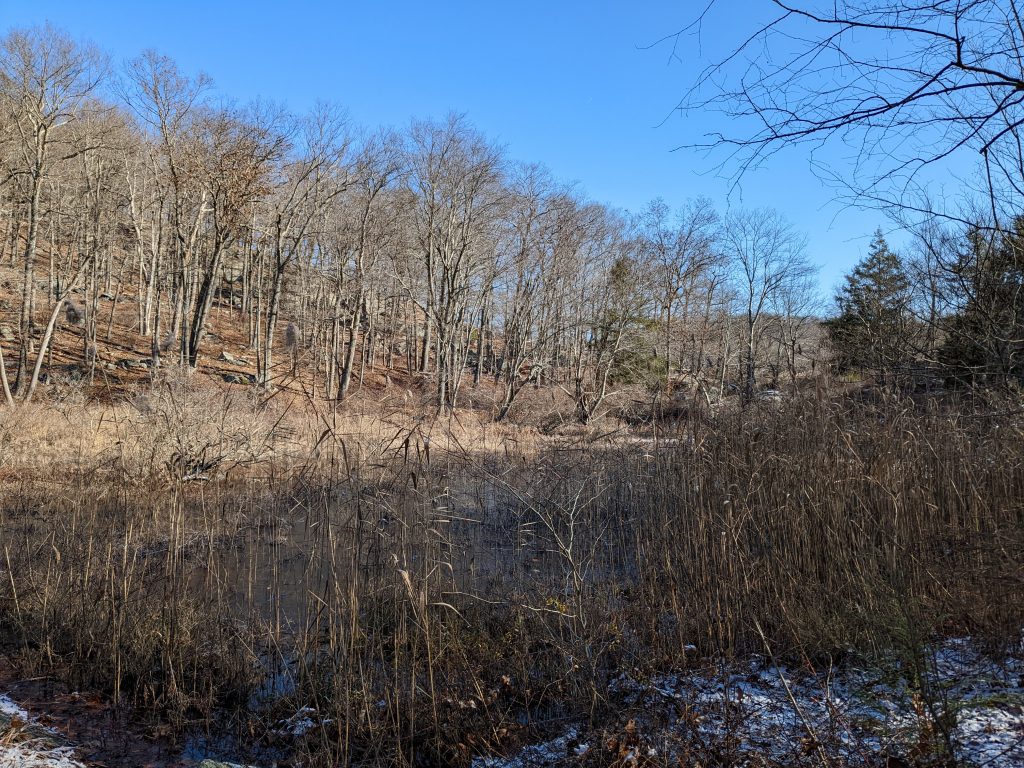 Blue Disc ends at Tri-Trail Corner, where the Ramapo-Dunderberg and Victory trail all converge.

I was going to take the Ramapo-Dunderberg back from this spot, but it looked like I would have to backtrack.  Ramapo-Dunderberg crosses a stream, and the rocks didn’t look inviting.  Neither did the water.  I fell a couple of weeks ago, I didn’t want to make that mistake again.  Conveniently, the Blue Disc trail uses a natural dam to cross the water. 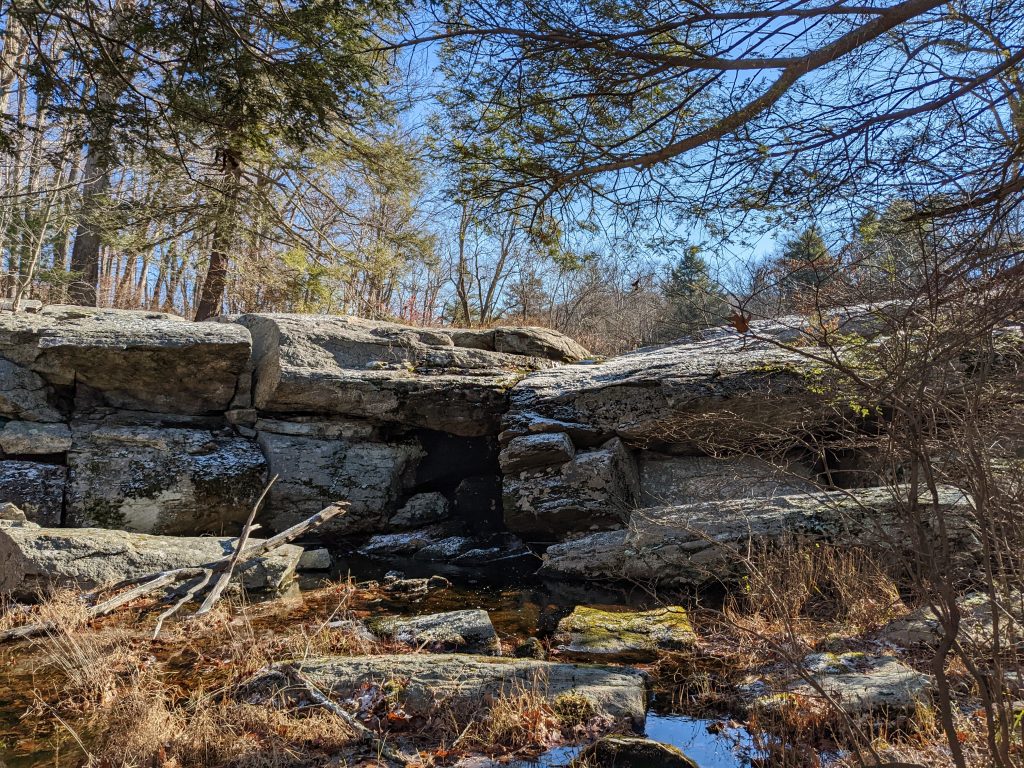 The swamp is on the other side of the rocks.

A little spur trail connects the Blue Disc with the Ramapo-Dunderberg. I have been on the Ramapo-Dunderberg trail a bunch of times, though not in this section.  It was mostly a woods road.  The trail does go past the Black Ash mine, though I didn’t find the mind (and wasn’t bushwacking in the snow on a hill to find it.)

I junctioned with the Kakiat trail to head back to my car.

This section of the Kakiat is mostly woods road.  Part of it is near Route 87, so there is some road noise.  It eventually turns away and heads back towards the Blue Disc trail. 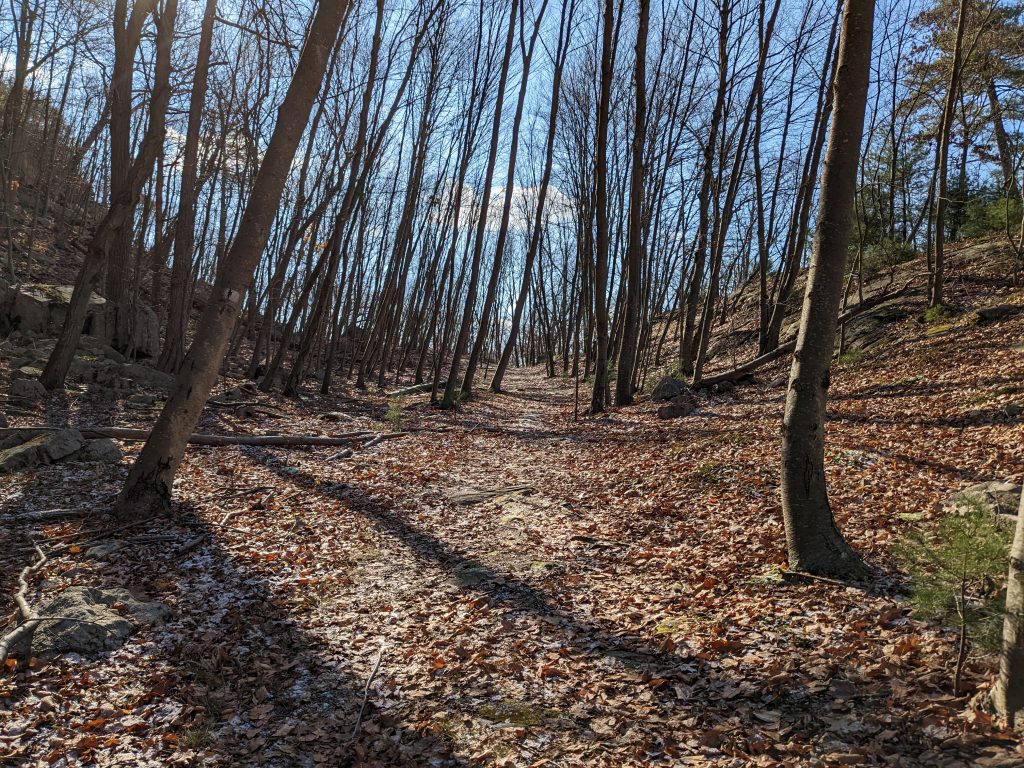 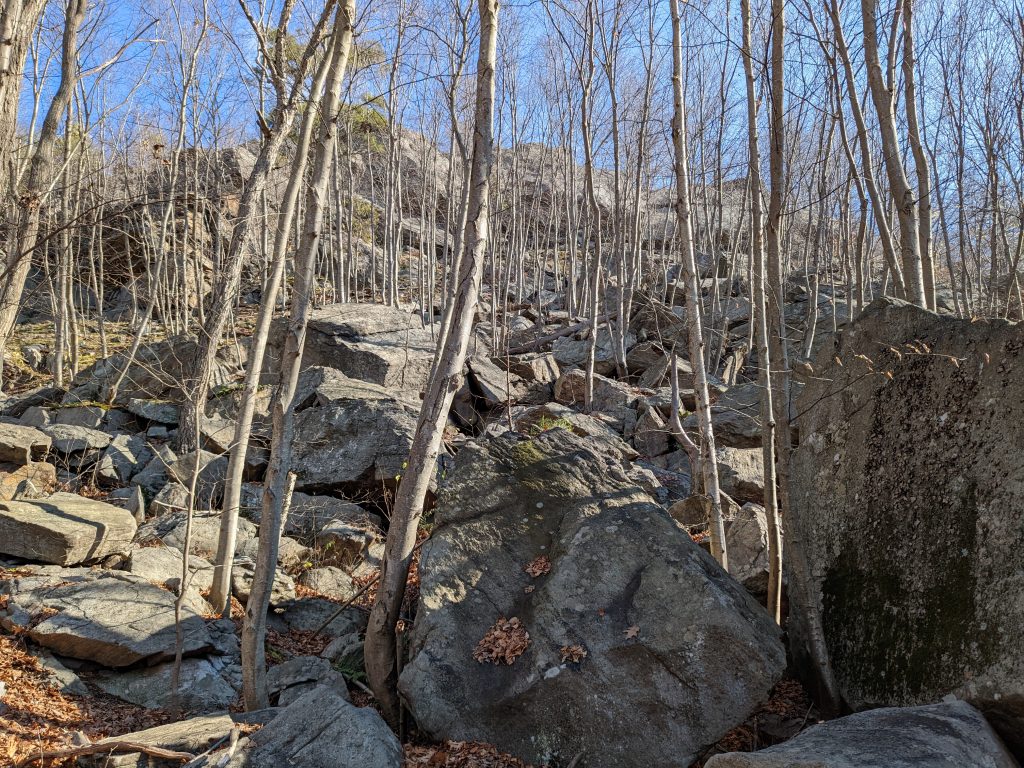 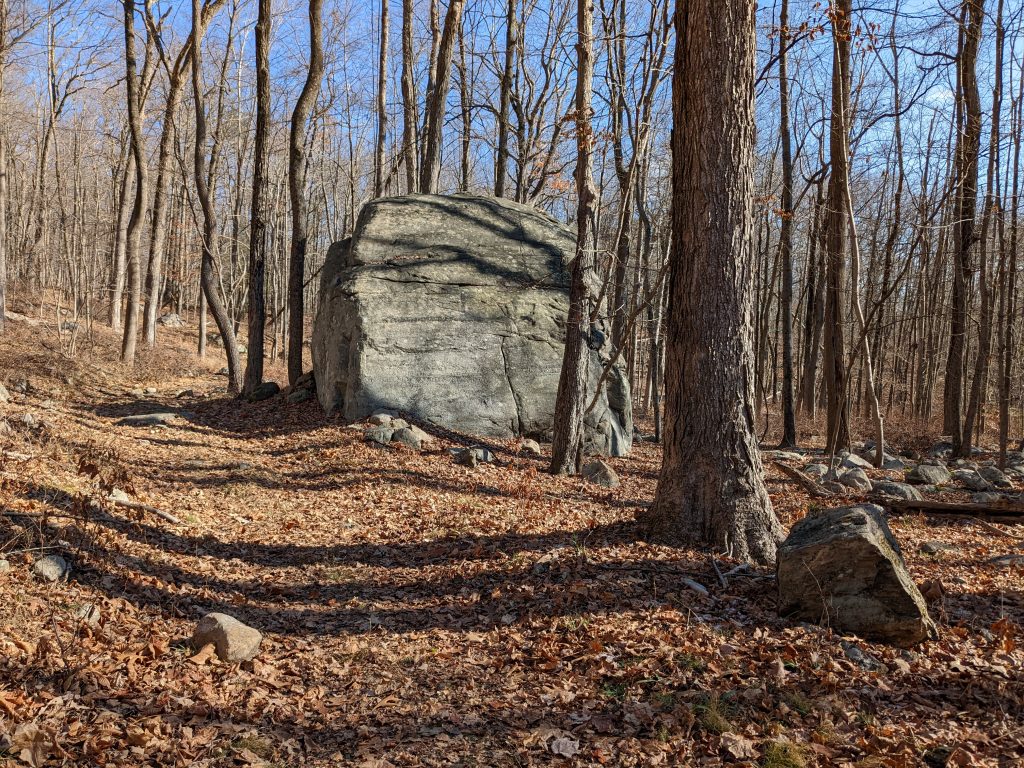 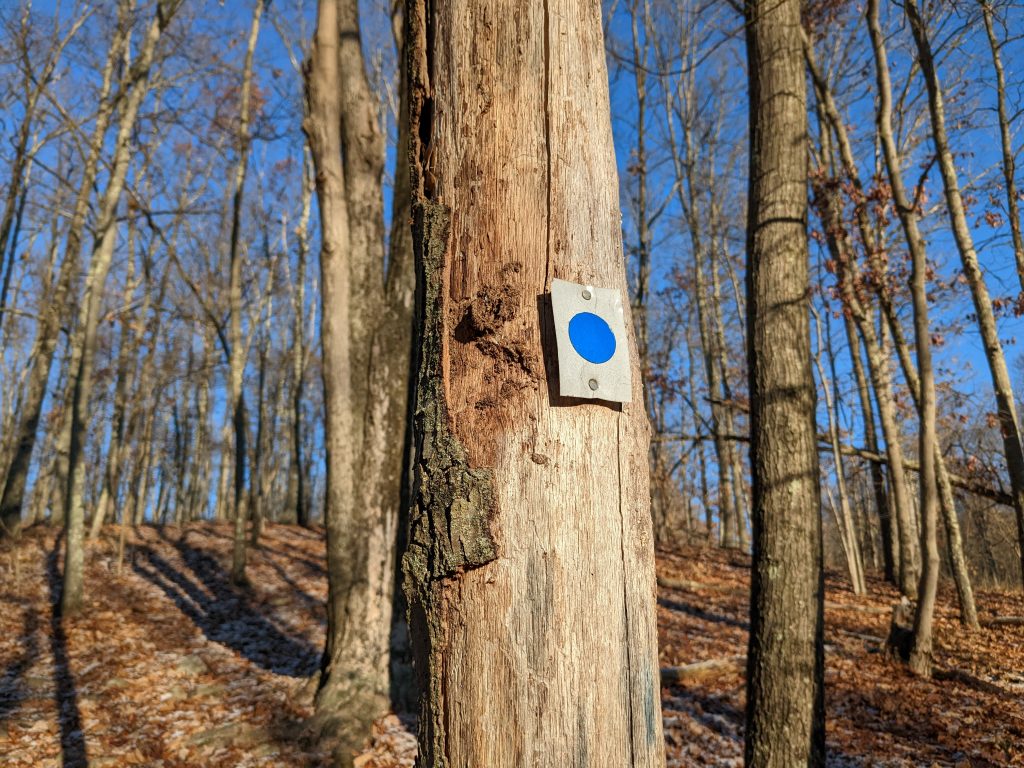 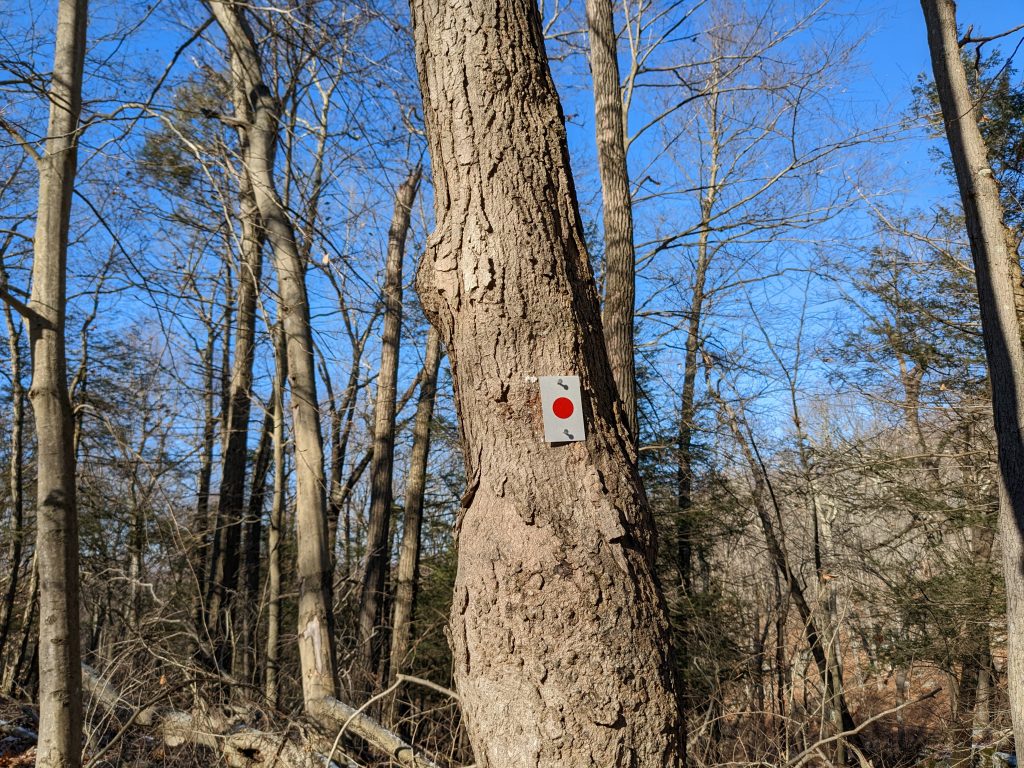 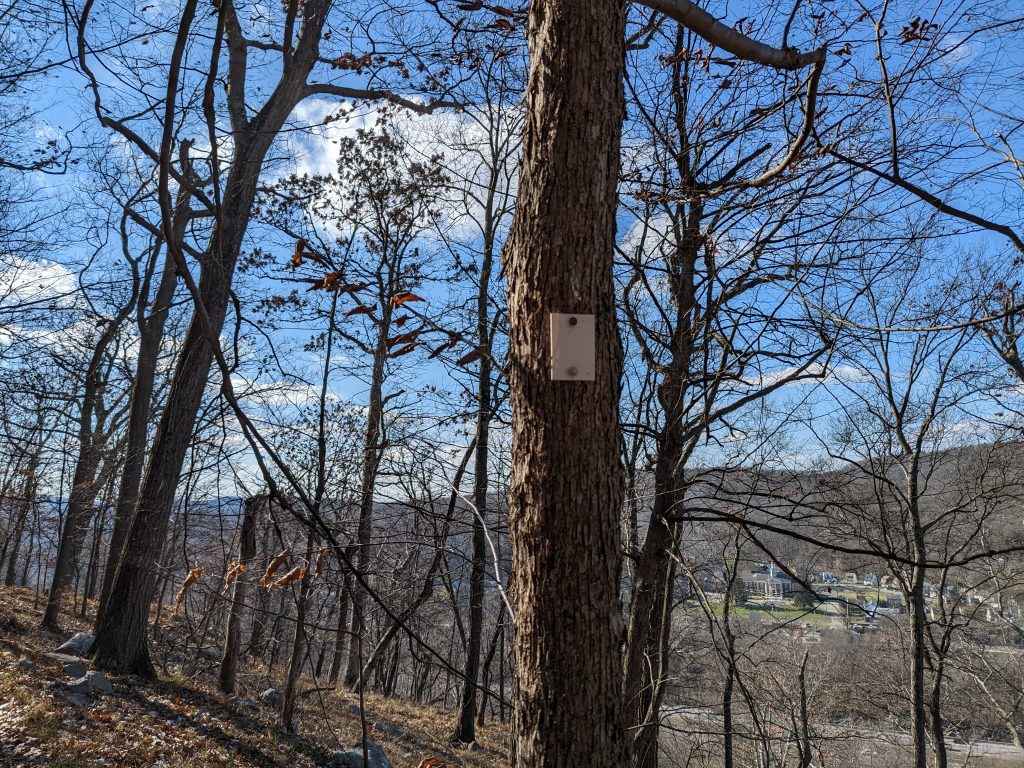