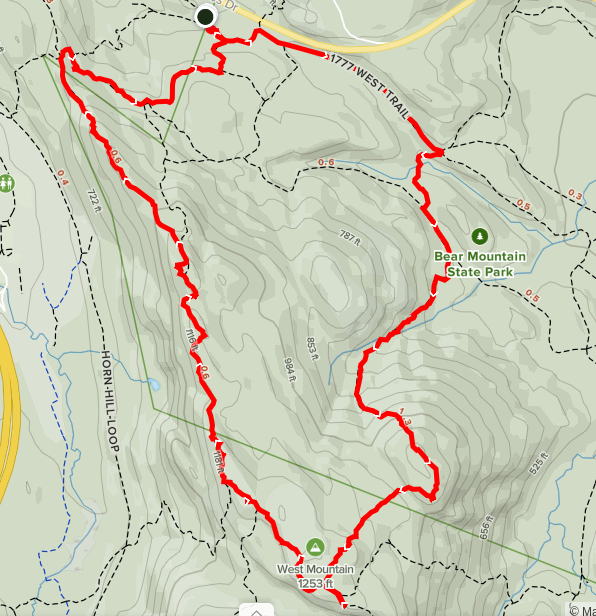 It was 22 degrees at the trailhead, but, because I haven’t been out in a couple of weeks, I was heading out.  There was no snow on the ground, though I had microspikes with me, lesson learned from a couple of weeks ago.  I was the third car in the parking lot, though by the time I finished up, the lot was full.  I saw only one or two other people on the trails until I got to the Timp-Torne where I ran into some very large groups.  And, while I was mostly in Bear Mountain State Park, I crossed over into Harriman briefly.

The 1777 W trail has a spot where the tops of the trees have been snapped off.  It’s pretty surreal.  At this point the trail is pretty level, and there are a couple of brooks to rock hop. 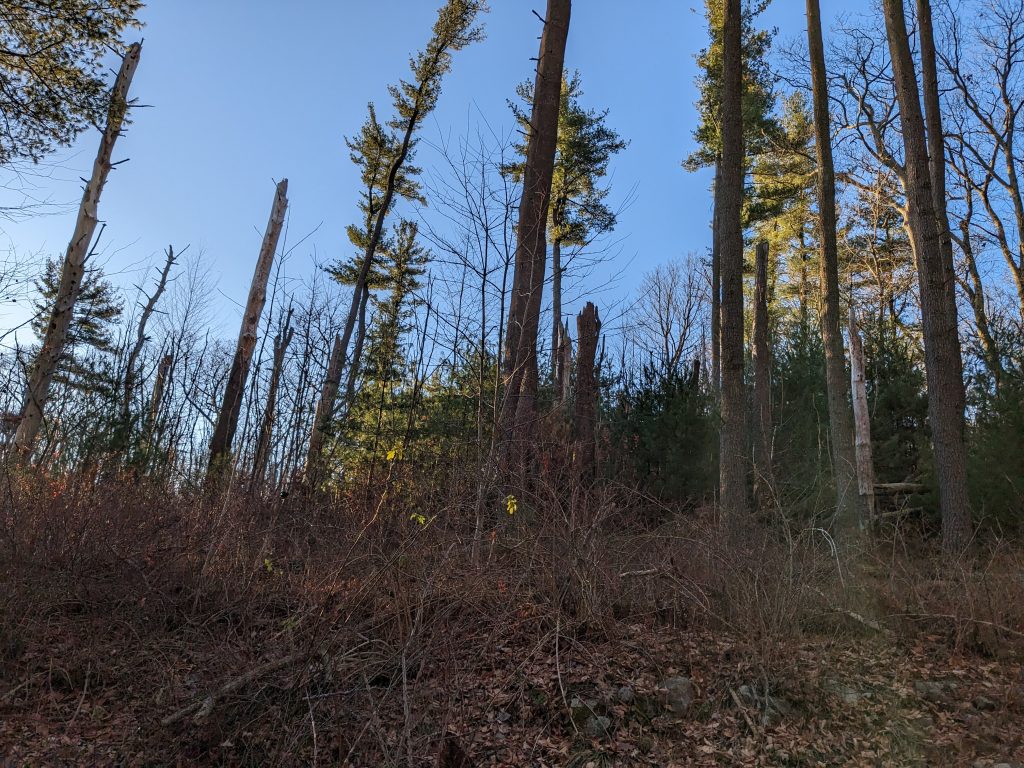 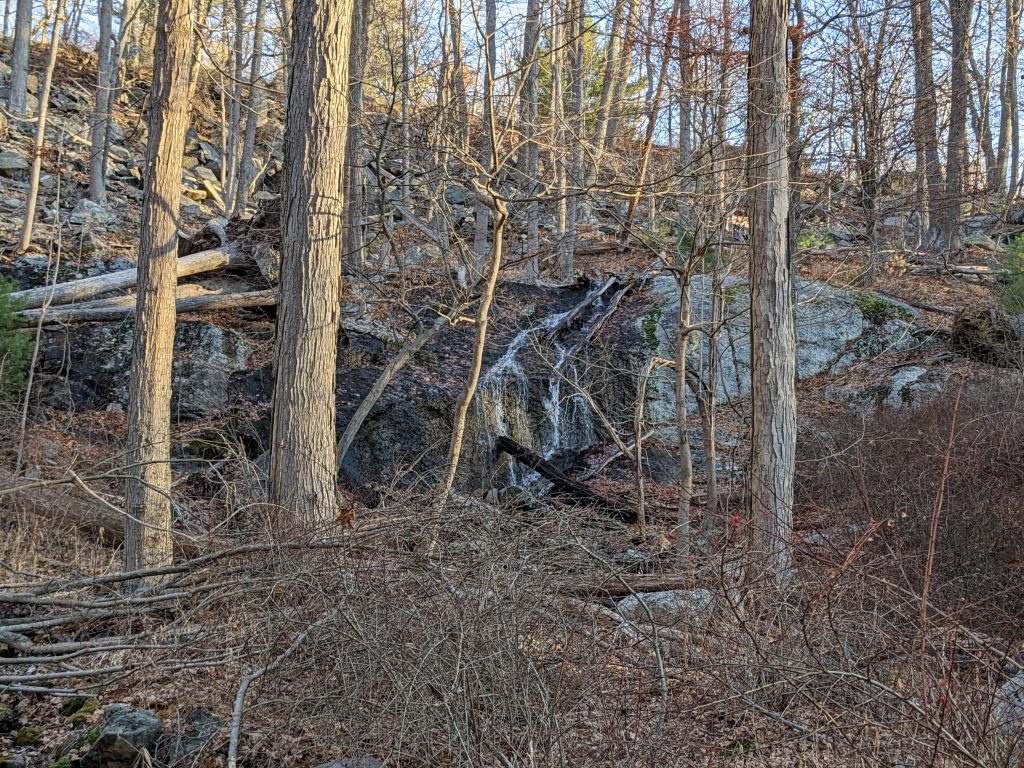 Here’s a shot looking back.  The water seemed higher than I would have expected. 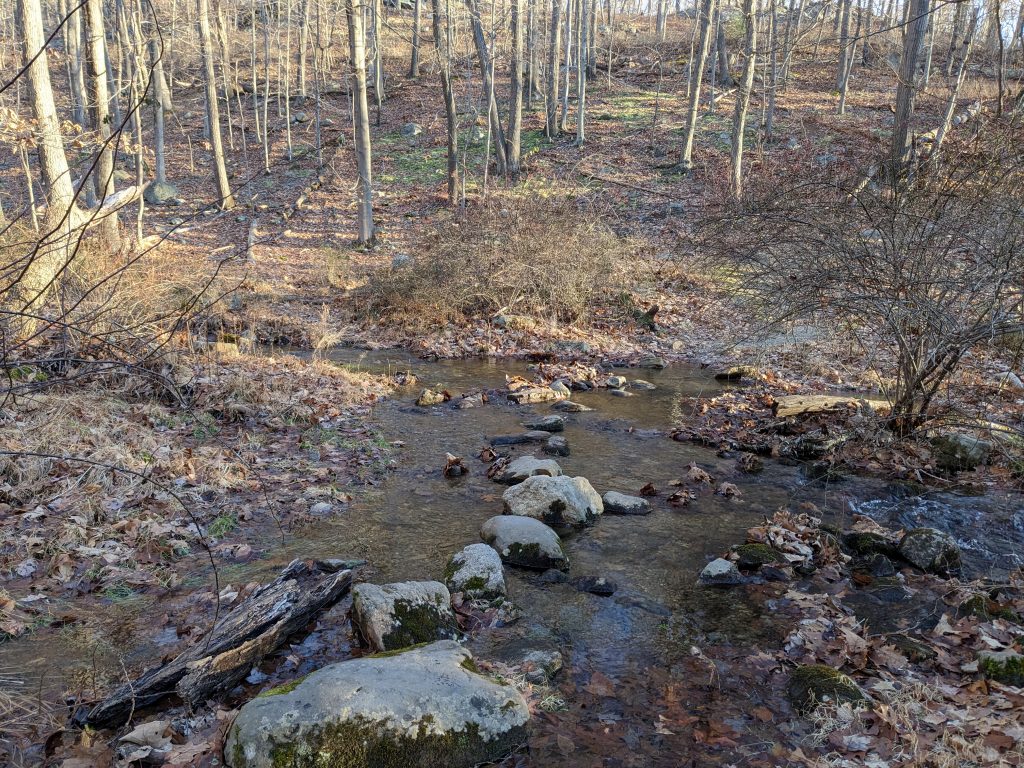 After turning onto the Suffern-Bear Mountain trail, the trail started to climb, ultimately making its way up West Mountain.  There were a couple of spots that were pretty steep.  Like this one.  And it was 8:50 in the morning when I reached this spot.  Nothing like a good workout to start the day. 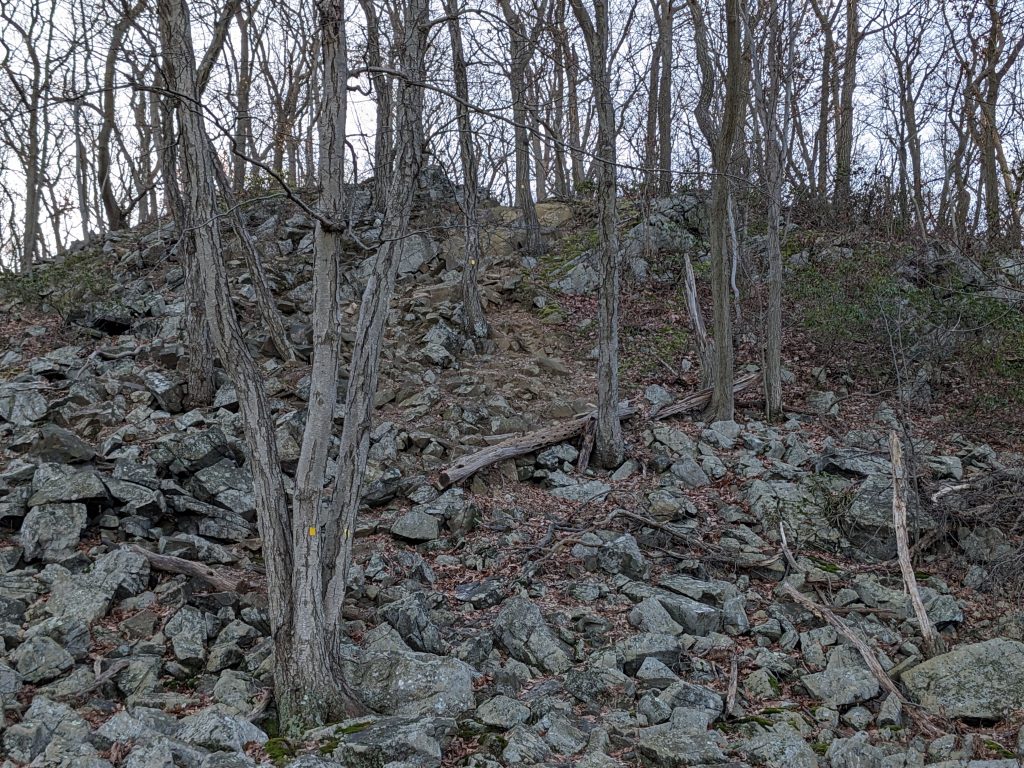 The picture is deceiving, the terrain is almost straight up; you can sort of tell by the trees.  And it was cold, though all the uphill kept me warm.

The scramble led to a false summit of West Mountain.  At the top was a vernal pond, with a layer of ice on the top. 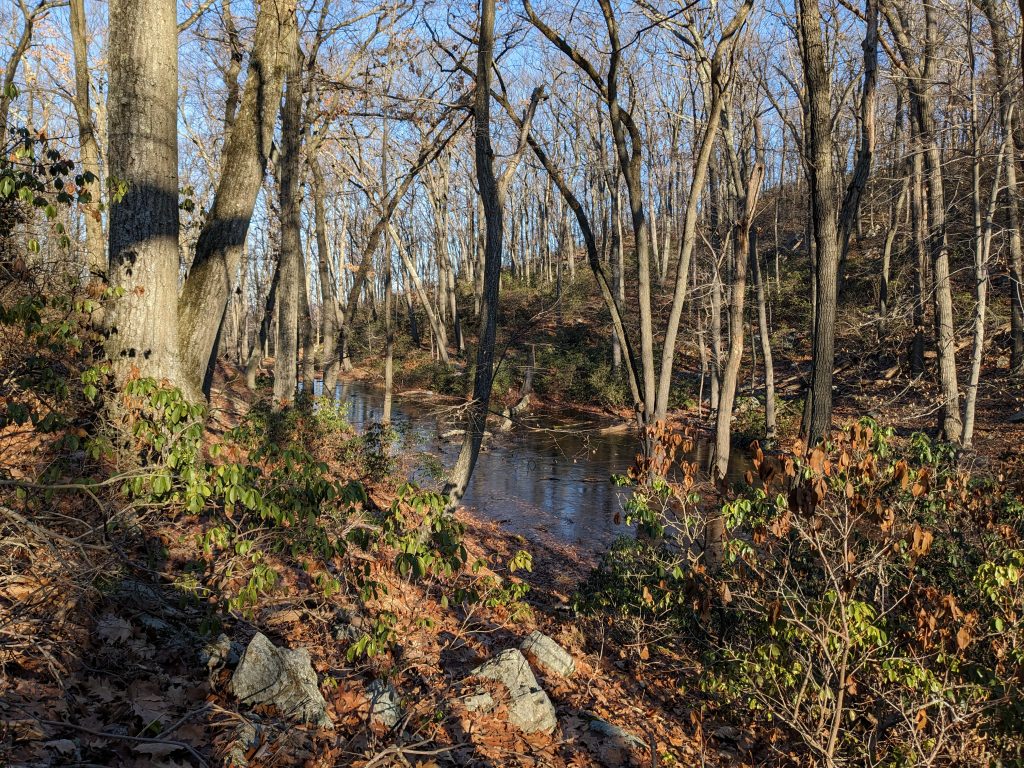 From here it was on to the top of West Mountain.  At the junction with the Timp-Torne trail, I went left to visit the West Mountain shelter.  This shelter is a little bigger than the other shelters I’ve seen, the sleeping platform goes the width of the shelter.  However, the shelter was packed (not with campers); there were two large groups of hikers that were milling about.  The shelter has a great south-looking view; with the Timp right in front of you, and clear view of New York City.  I took some pictures, then headed out.

From this point I took the Timp-Torne trail north.  The map showed multiple viewpoints along the way, and they did not disappoint.  There were views on both sides of the trail – sometimes looking west, and sometimes looking Northeast at Bear Mountain.

Here’s one of the first viewpoints. 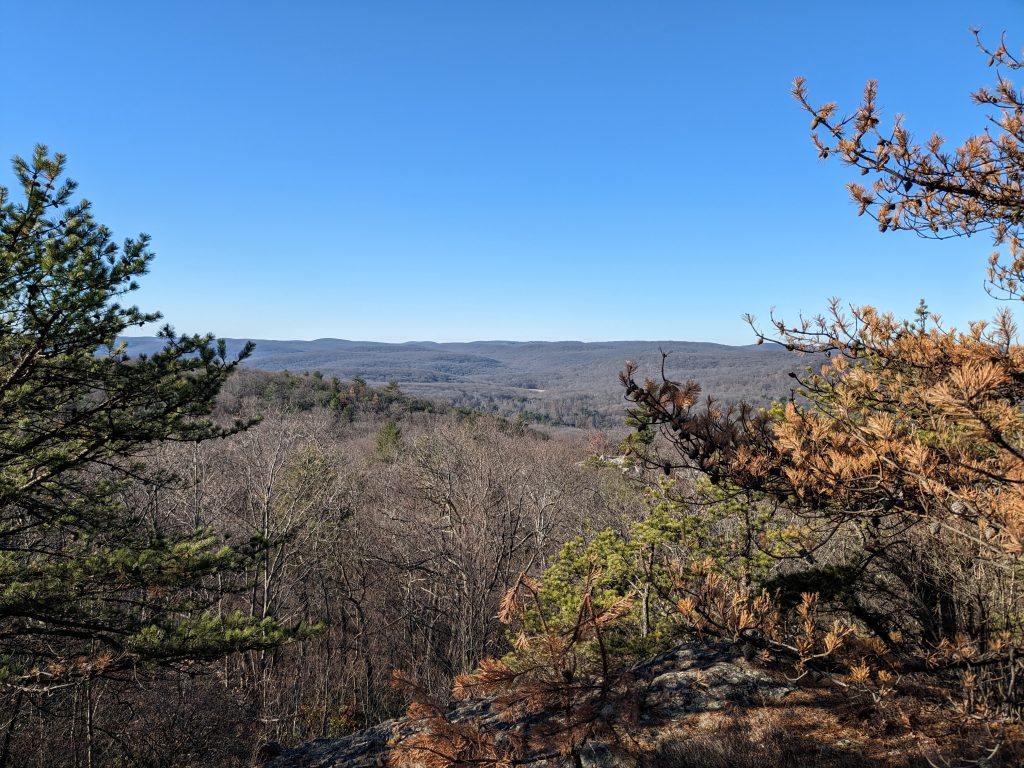 The next viewpoint, though, was my favorite.  It overlooks the southern portion of the Anthony Wayne recreation area parking lot, and looks west into Harriman state park.  The Appalachian trail junctions here. 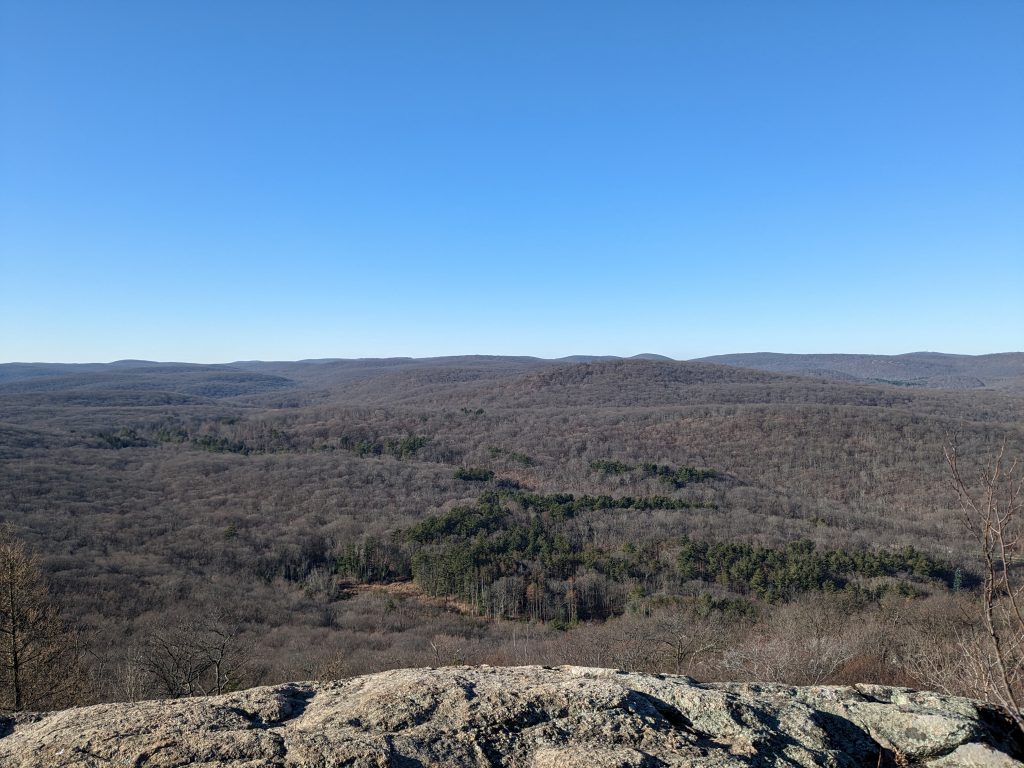 While sitting here for a minute eating a snack, I realized my phone was buzzing with incoming texts and mail.  Odd, I thought, because I lost reception when I pulled into the parking lot.  So I sent out a few texts and noticed the signal strength was almost 100%.  Upon looking around, I figured out why: 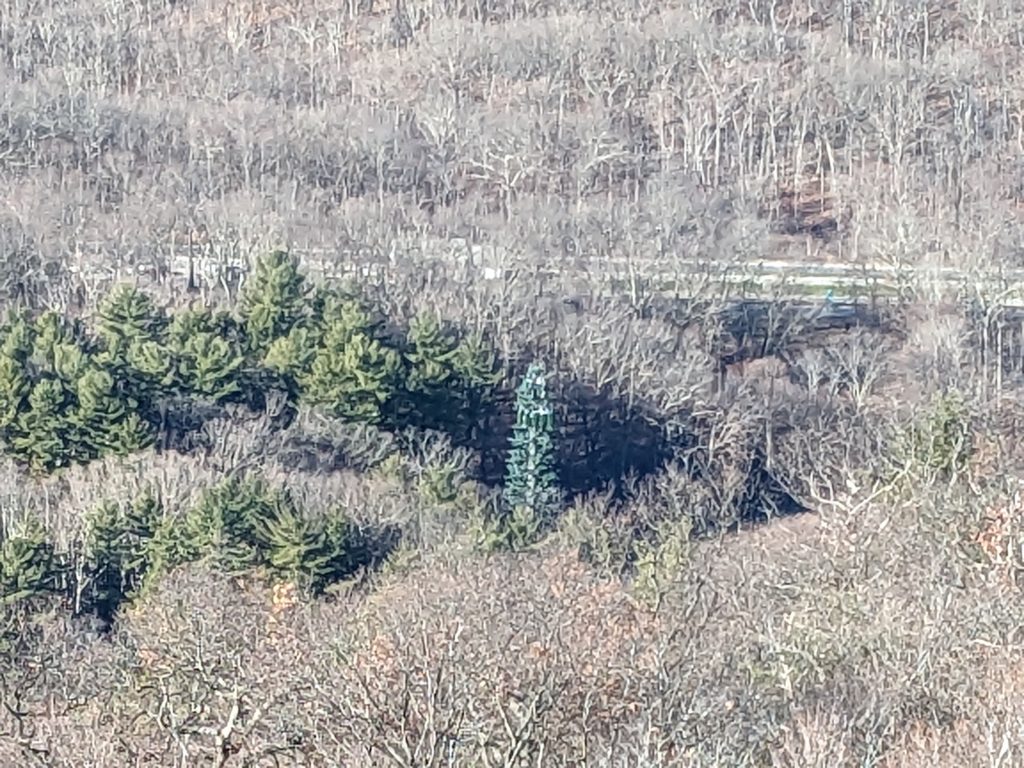 You would never see that in the summer, with all the leaves on the trees.  That’s the Palisades Interstate Parkway just behind the tower.  The parking lot is just to the right.

Here’s a shot of Bear Mountain from the right side of the trail. 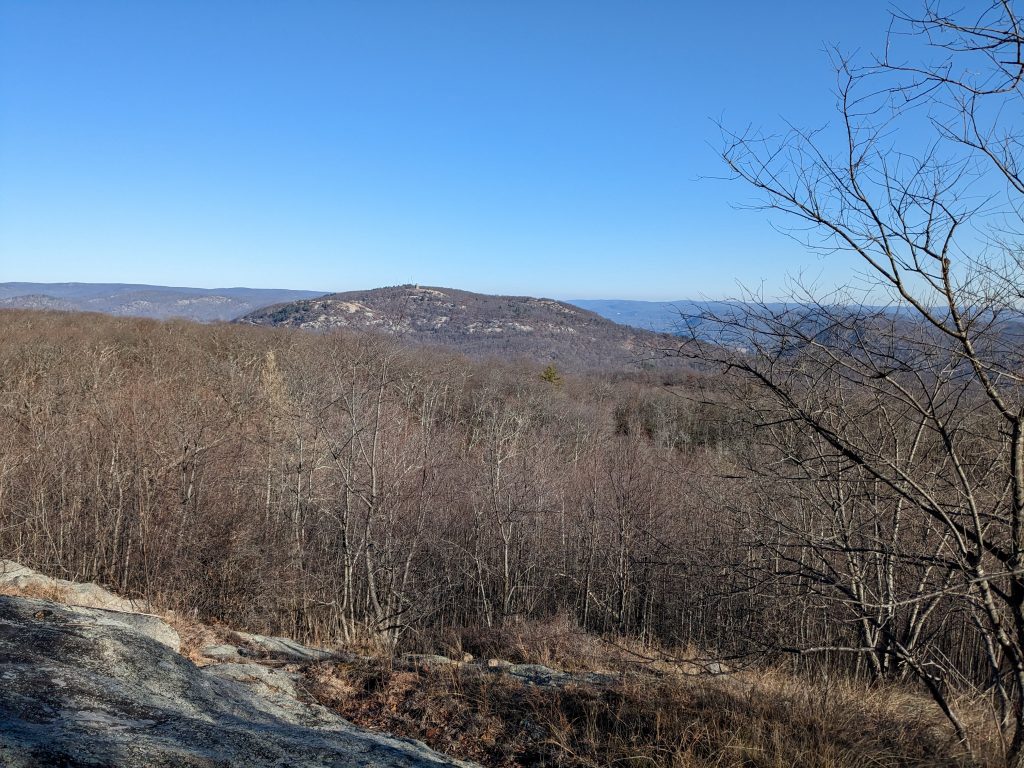 Walking the ridge along the top of West Mountain had great views, and not just from the viewpoints.  I was lucky in that all the leaves were down; I imagine it’s tougher to see in the summer. 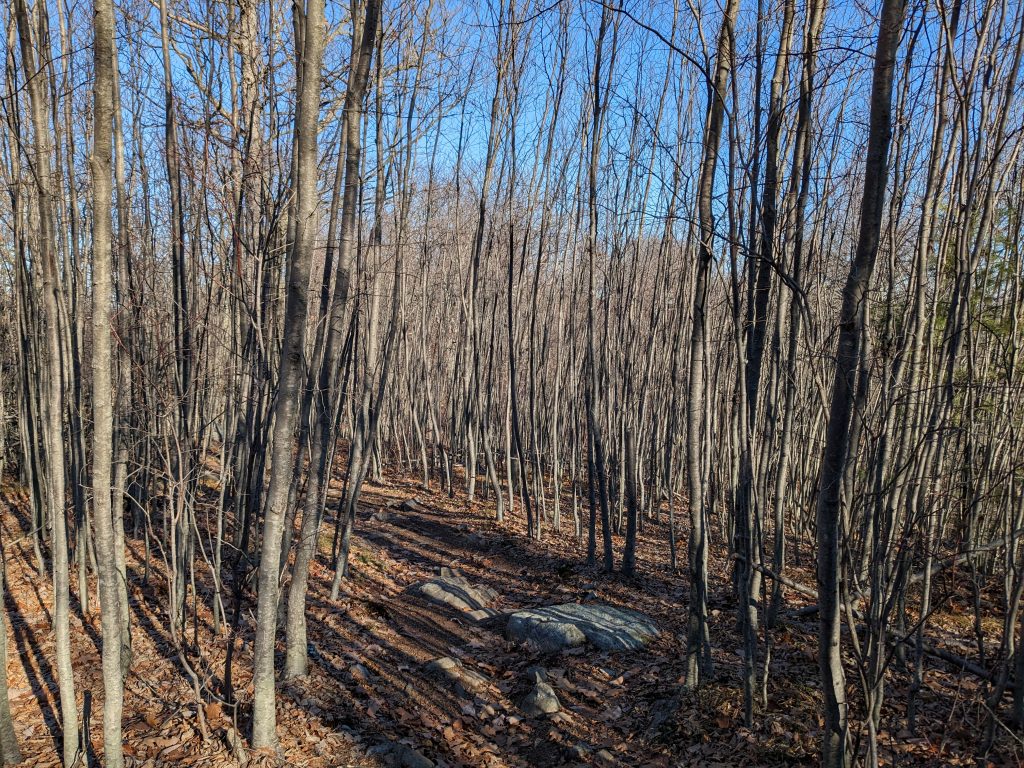 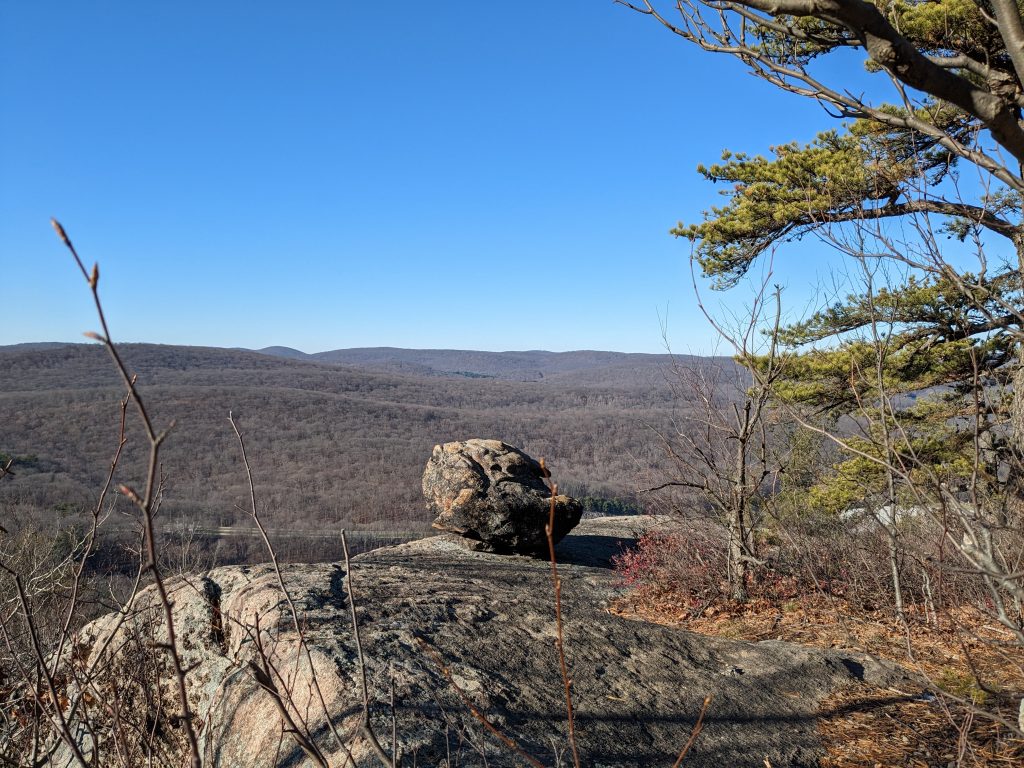 The last scramble for the day occurred at this point.  You have to squeeze between the rocks.  Right in the center of the picture, the trail turns right and goes straight up the small cliff.  It’s easily doable up.  I’m not sure I would want to try it down.  There must have been a trail that went around the climb, because I could hear people, but I couldn’t see them. 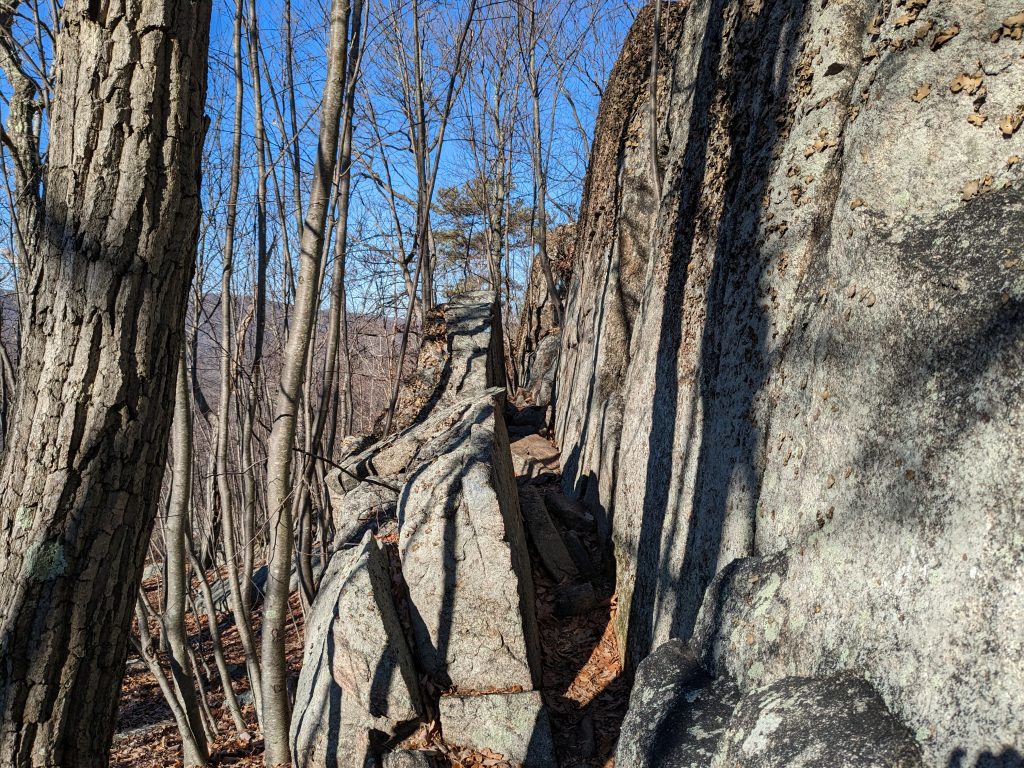 From here I took the Timp-Torne to the Fawn trail, then back to the car.  There is a good scramble downwards (or up, if you’re going the other direction) just before the junction with the Fawn trail.  This was a really great hike for views – and the viewpoints will be great all year round.  With the leaves down there were some extra views. 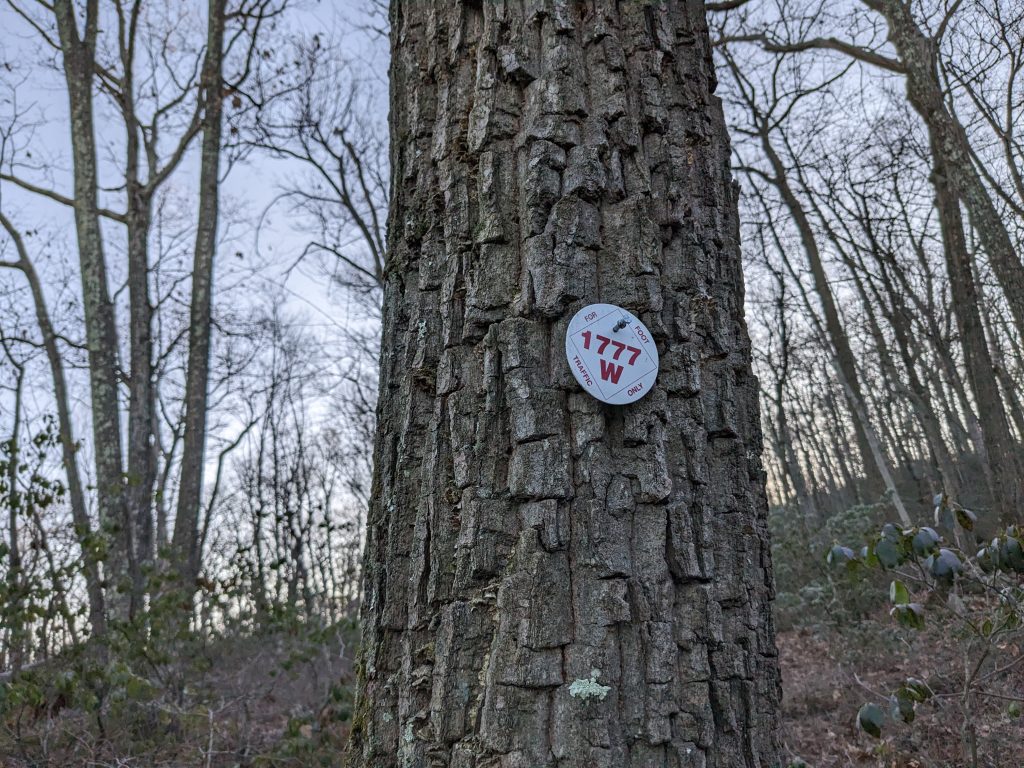 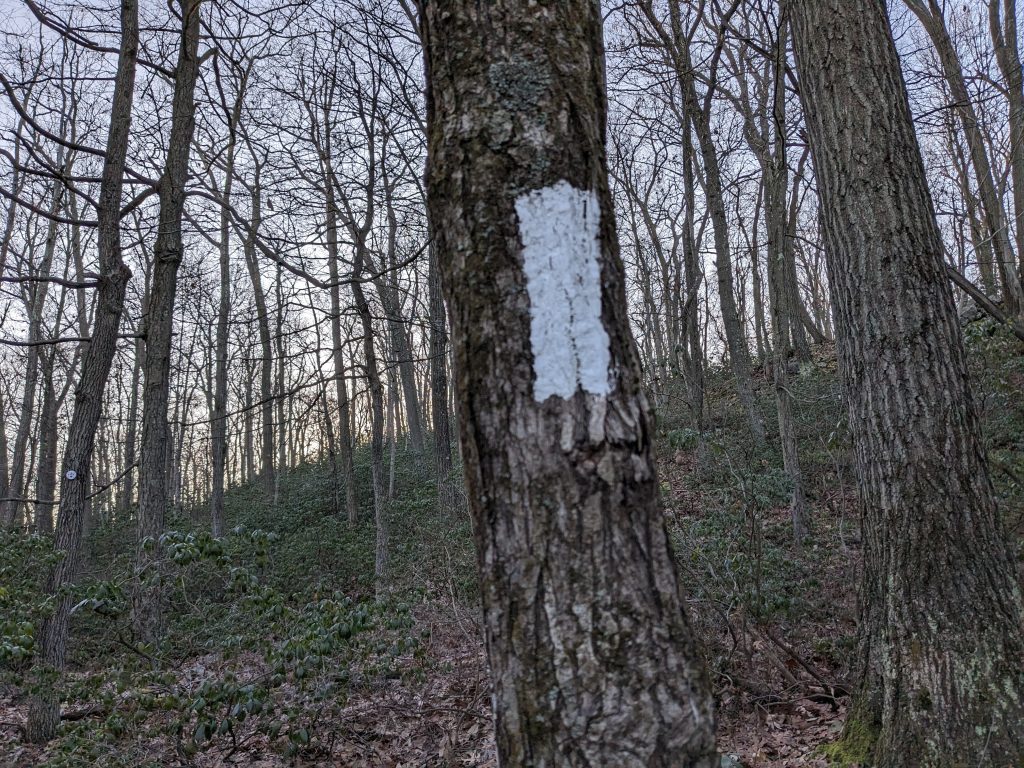 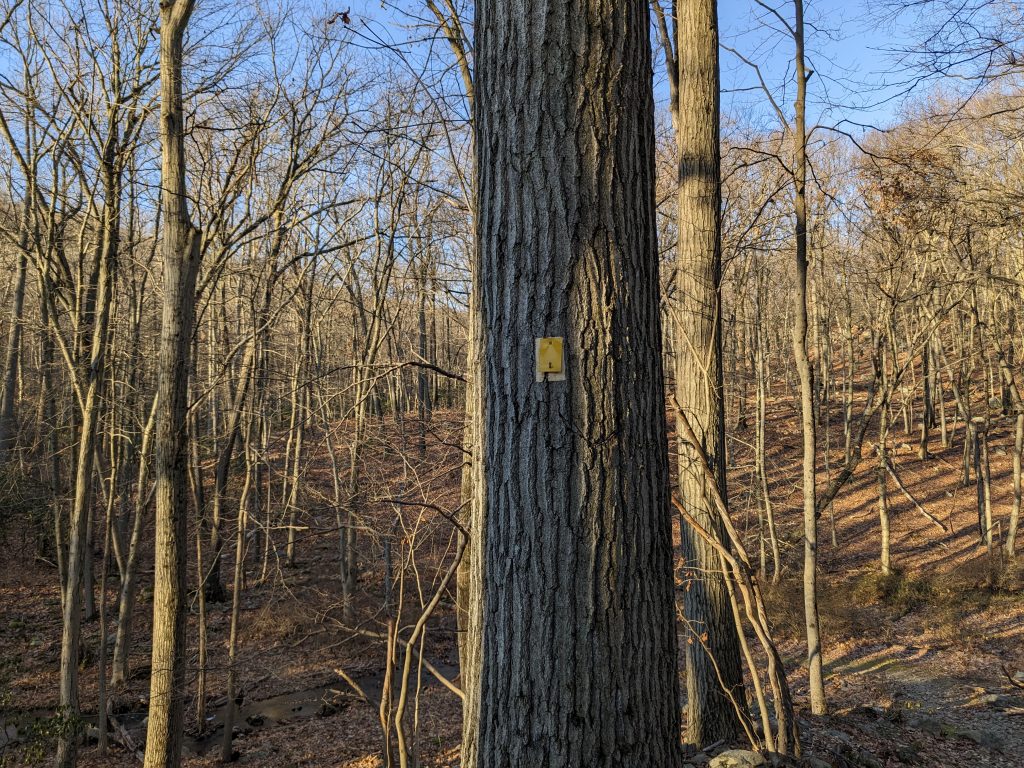 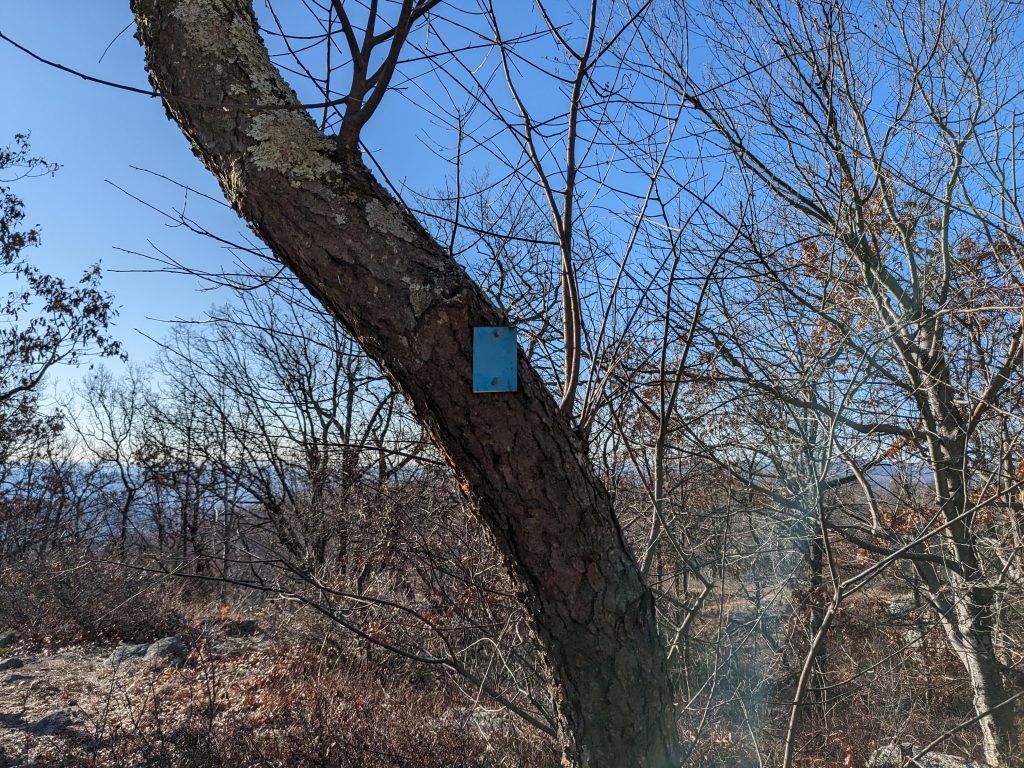 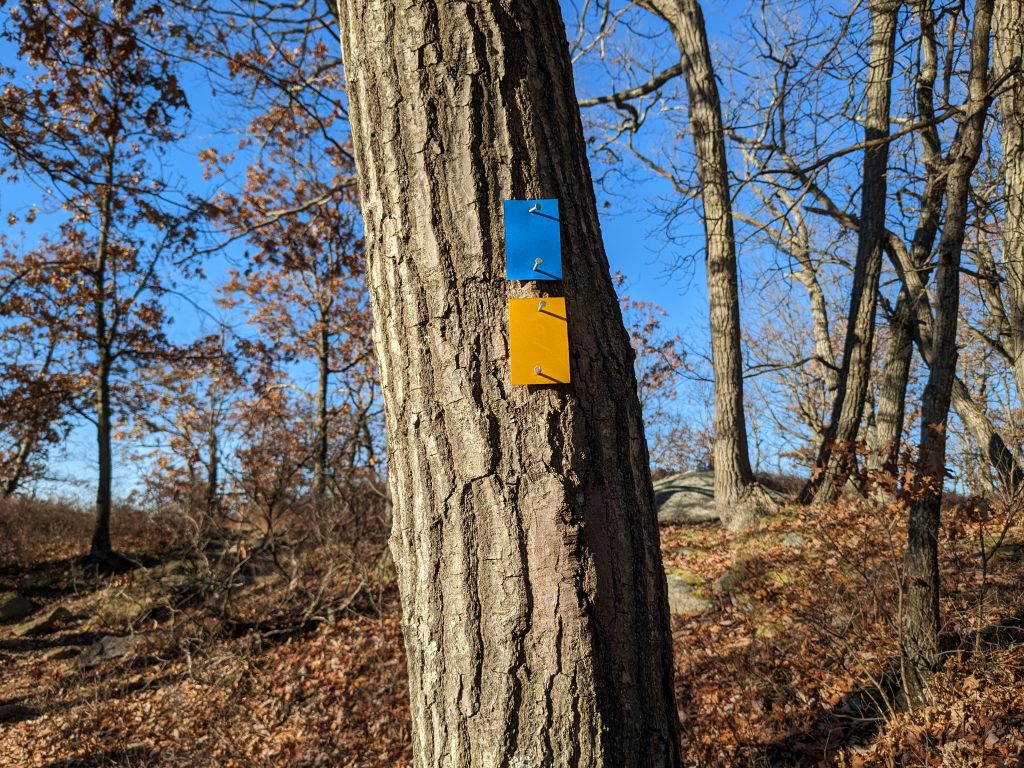 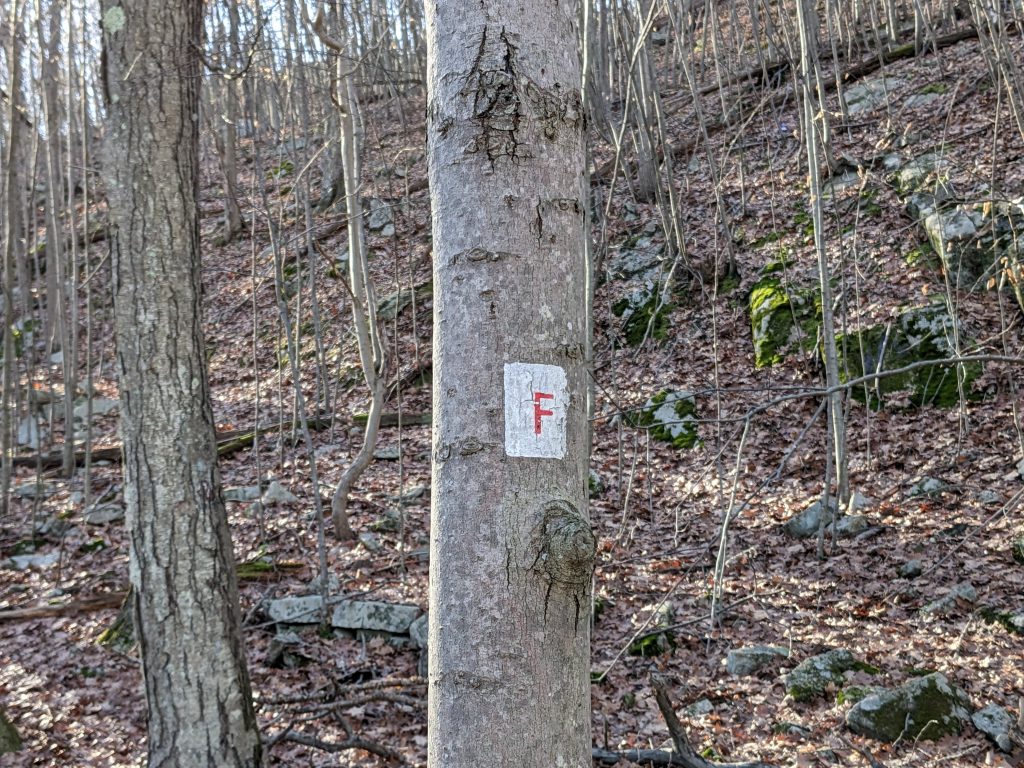