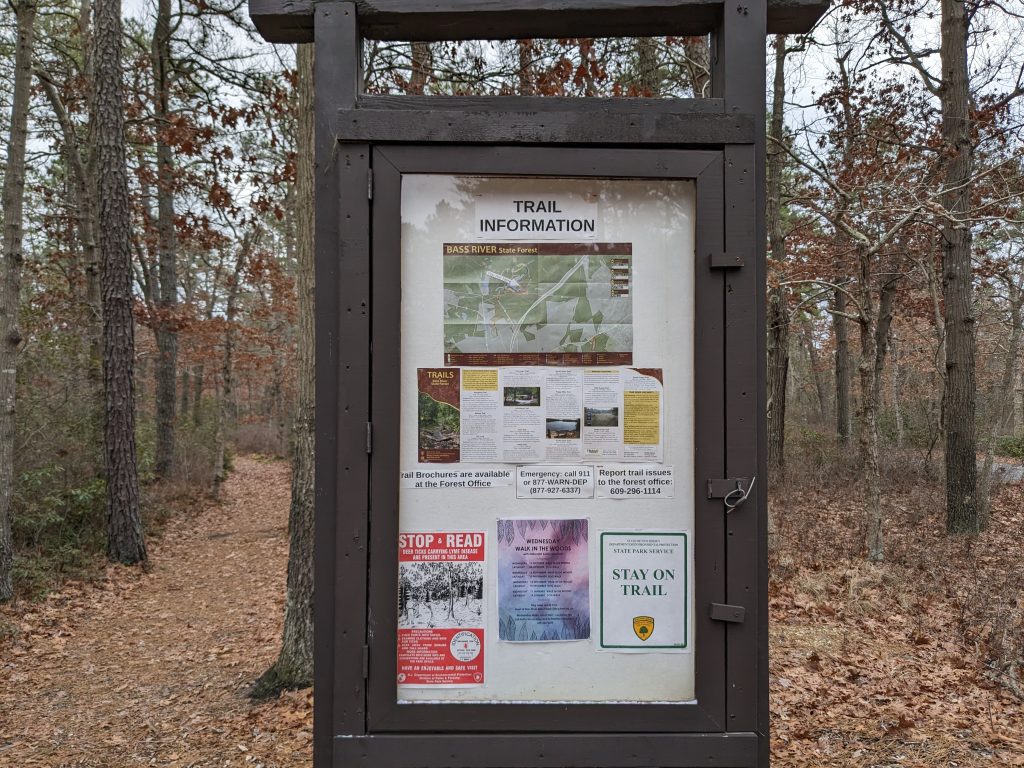 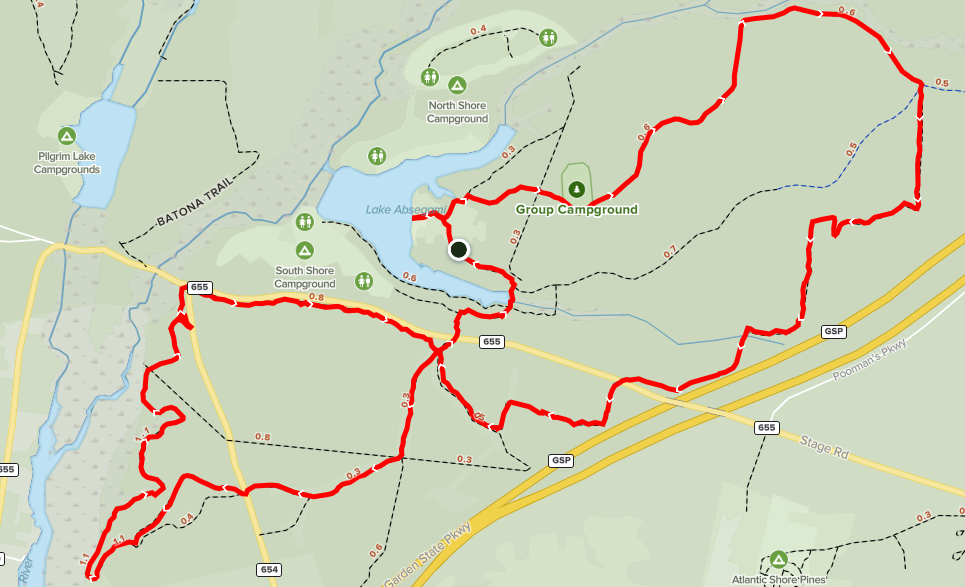 Average temperature for this hike was around 35 degrees, and the wind was blowing.  There were flurries every so often but  no accumulation.  I did this hike as a figure-eight, sort of.  Both loops were hiked clockwise.

Before I started the trail, I checked out Lake Absegami and the beach area.  At the time of this writing there is construction on a new pavilion, but it is still possible to walk down to the water.  Plans are for the construction to be completed by summer of 2023.

After viewing the lake, it was time to start the hike.  By the water, the wind was really whipping, but in the trees, you did not feel it as much.  You could hear the wind, sort of like background noise. 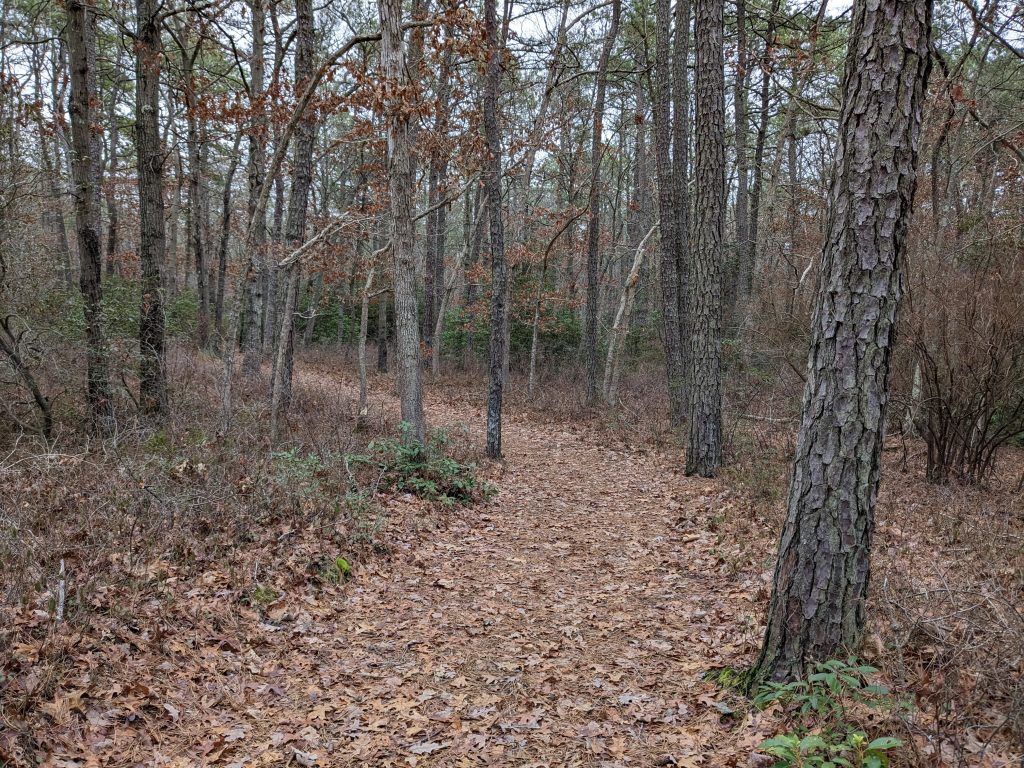 Most of the trails were wide, compact sand.  In a couple of spots the trail was the loose, deep, sugar sand.  And there were some places where you hike on sand roads.  There is almost no elevation gain throughout the whole forest, though that is to be expected hiking in the Pine Barrens.

The Poppy Allen trail takes you right alongside a group campsite; that was busy today with a Boy Scout troop.  I would later run into the scouts out on a hike.  “Poppy” Allen was the first caretaker of Bass River State Forest.

Every so often you hike into Pine tree plantations, where the trees are somewhat growing close together.  It was in these biomes where it was the most peaceful. 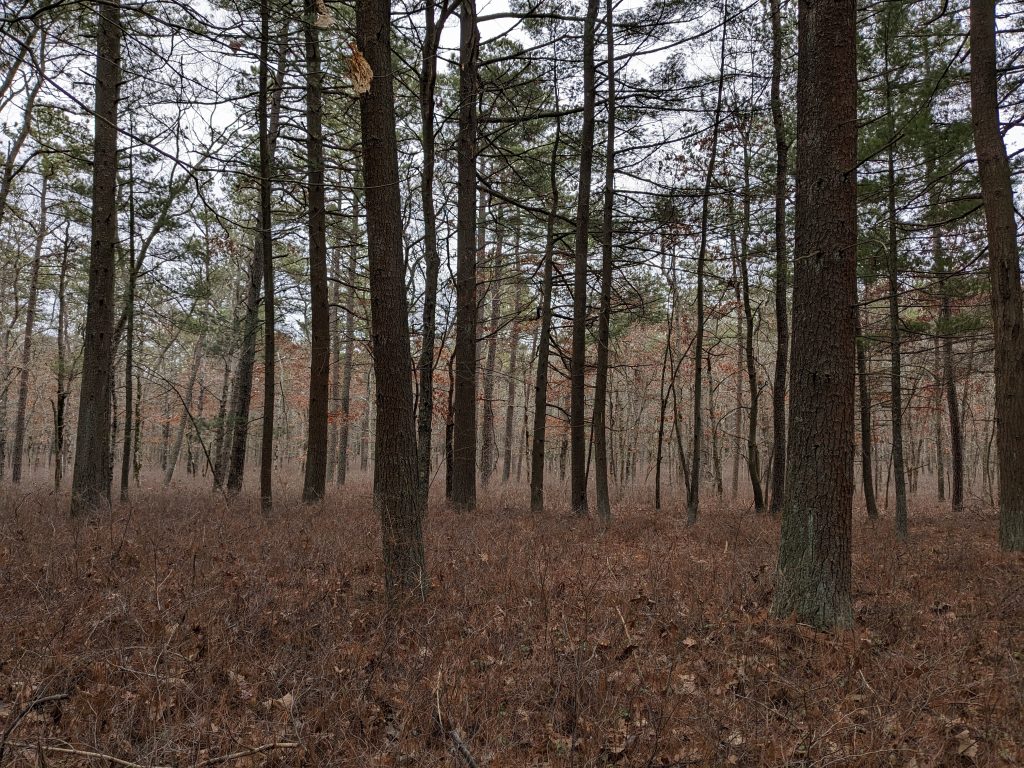 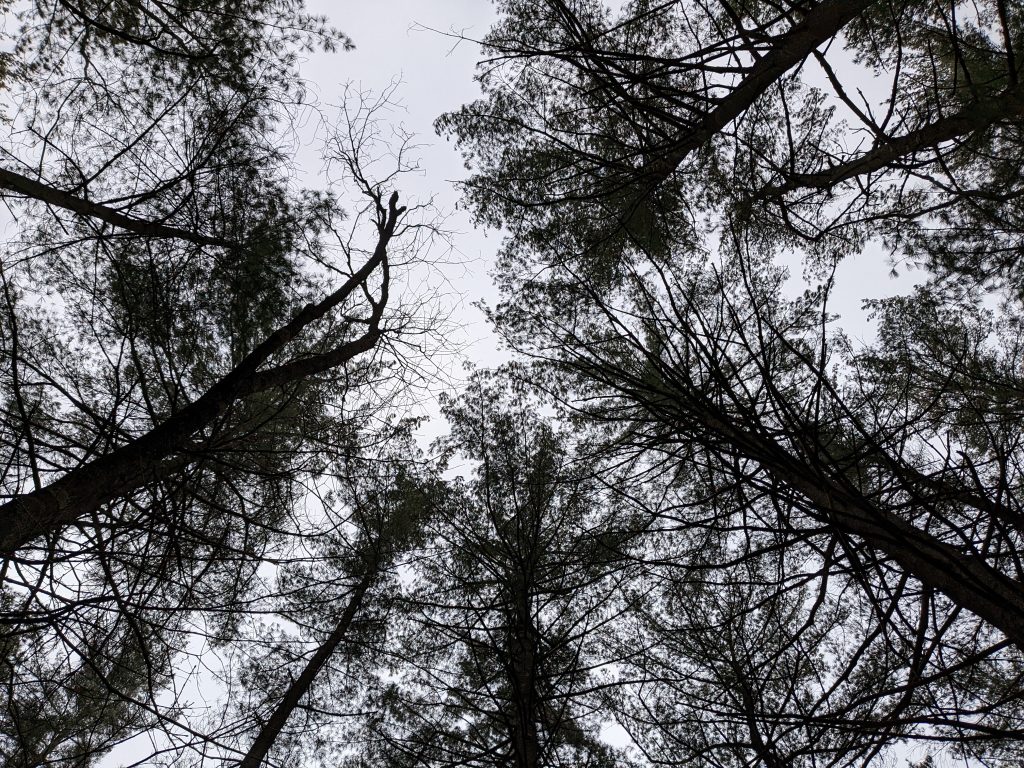 All the trails in this State Forest were well marked.  There are lots of side trails, woods roads, and sand roads; but if you stay on the trail (and keep your map handy) you will not get lost.  What I liked especially:  Whenever there was a turn, there was a blaze with an arrow telling you which way to turn, and then a blaze immediately after the turn for you to pick up the trail.  And all junctions are well blazed.

After turning onto the Faulkinburg trail, the trail sort of parallels the Garden State Parkway.  This was one of two places where there is a bit of road noise.  The trail actually comes pretty close to the roadway. 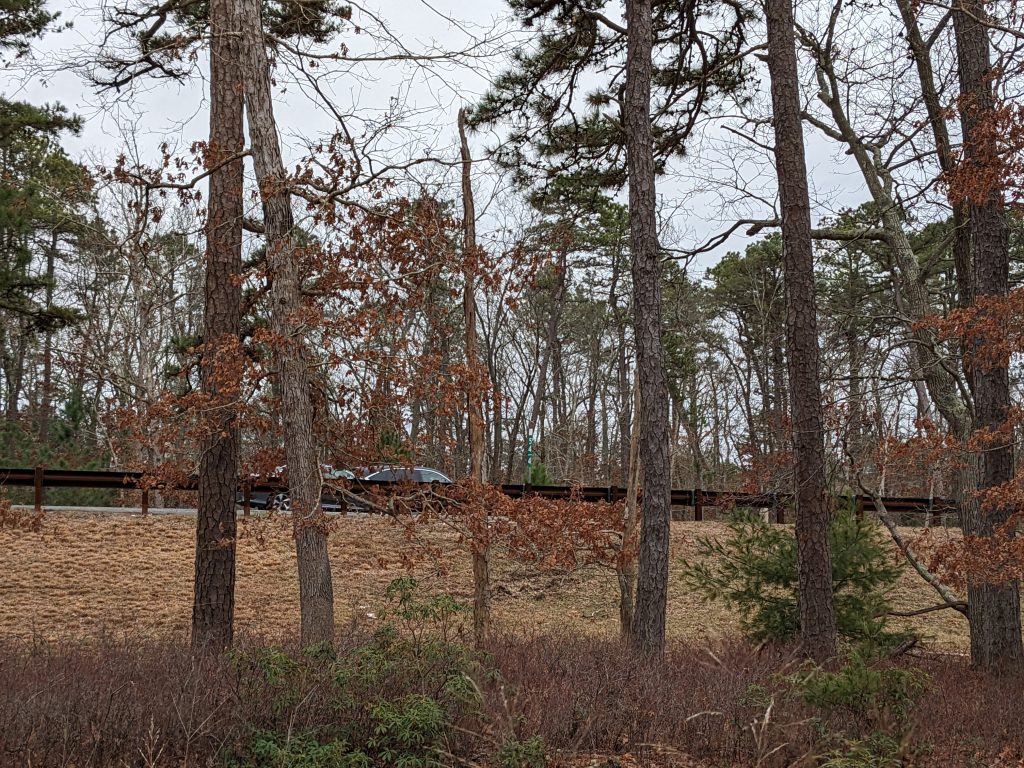 Soon enough it cuts back into the woods. 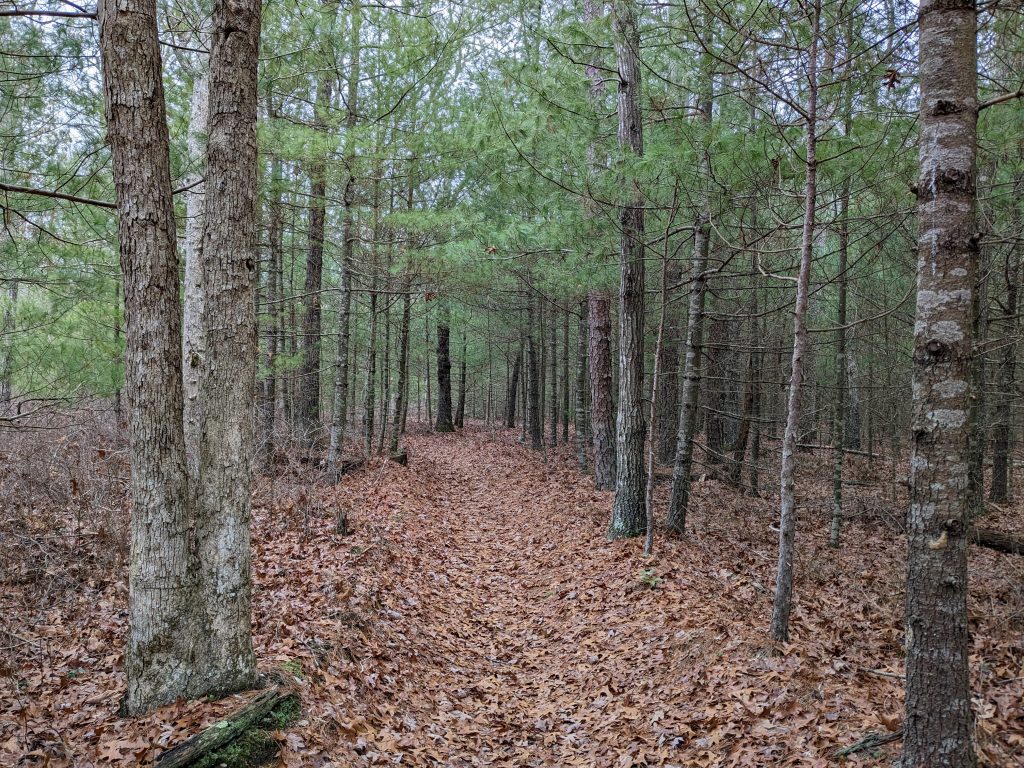 At the big junction of trails (in the center of the figure-eight in my map) is a sign announcing one of the tree plantations.  There are many in the forest, all planted by the Civilian Conservation Corps in the early 1930s. 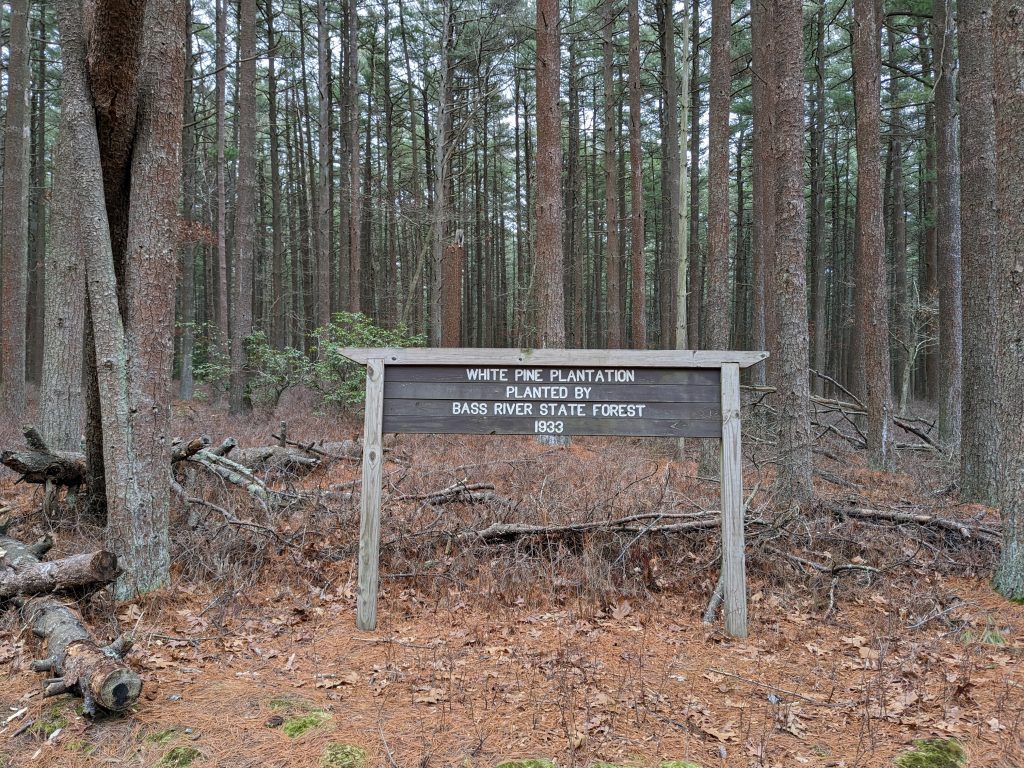 From this junction I jumped on the CCC trail for the western part of my journey.  This crosses East Greenbush road.  Where it crosses, I was able to get a picture of the Bass River Fire tower and another plantation. 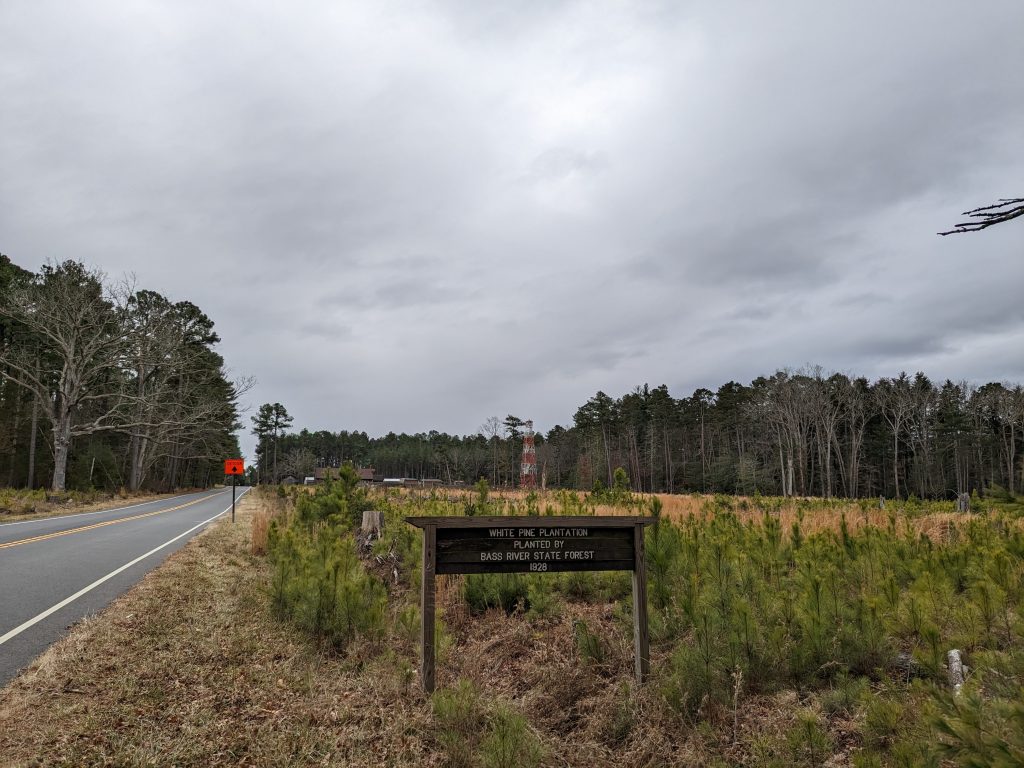 The forest in this section was my favorite of them all.  The trees are HUGE.  It is extremely quiet and peaceful in this section.  I could have sat there for hours, except it was 37 degrees and the wind was blowing.  Maybe in the summer.  Definitely a magical place. 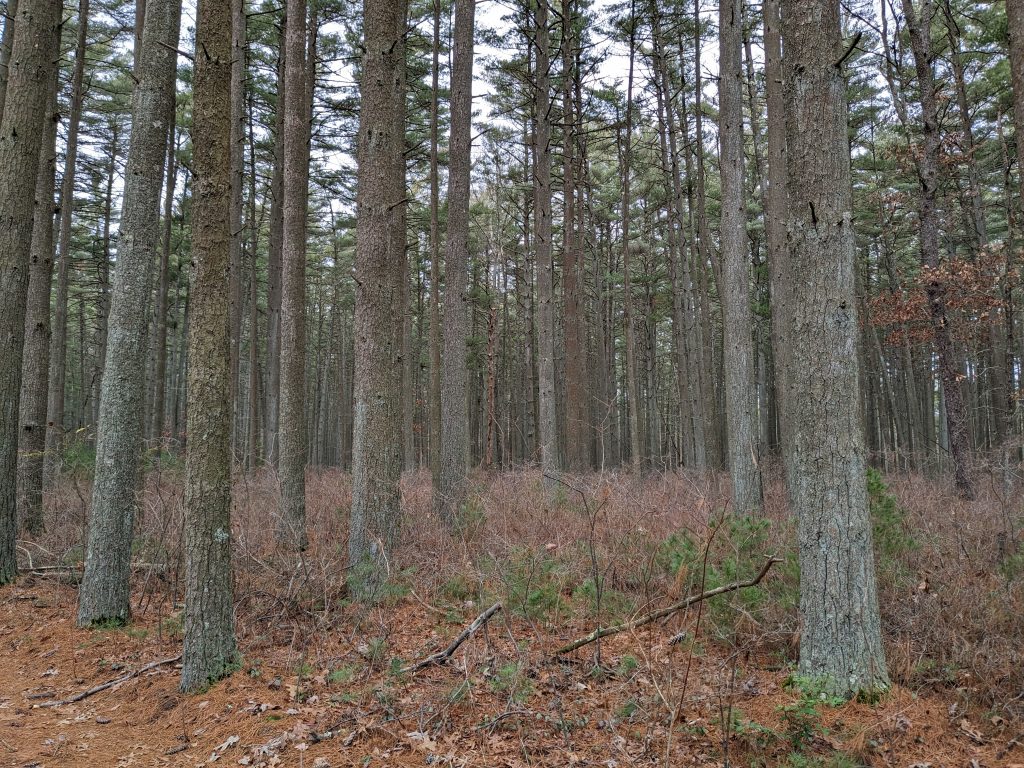 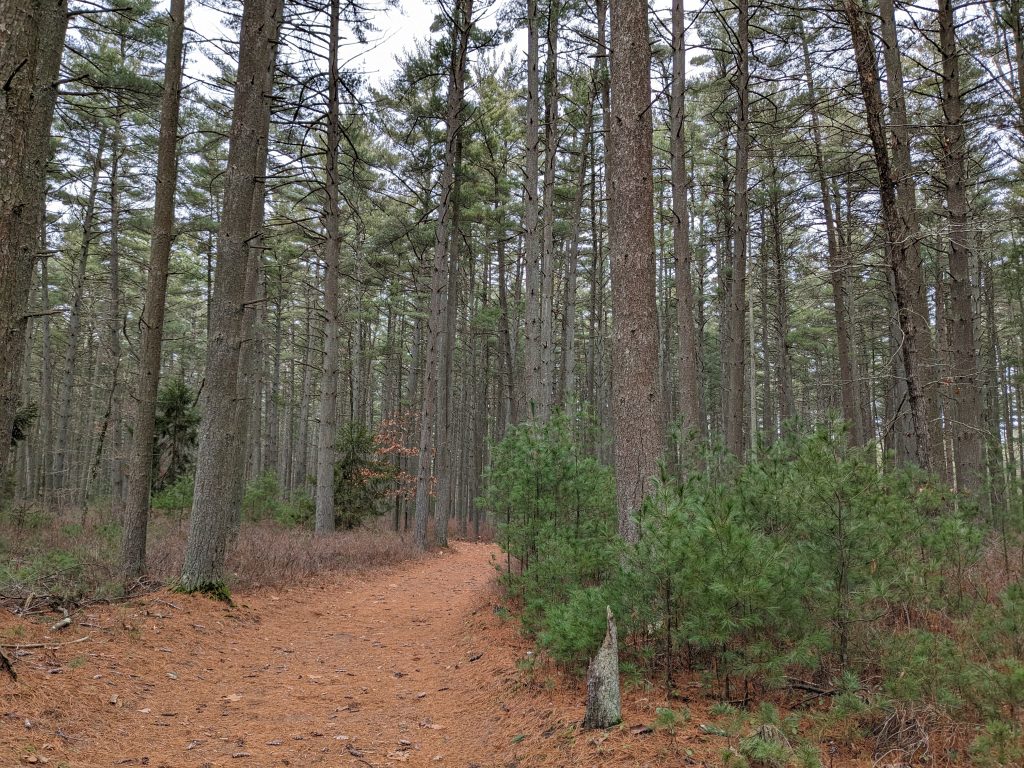 The trail winds its way towards the Bass River.  I did not have a view of the river, but I could see houses lining it.  There are some marshy, boggy areas, and that is perfect conditions for a cedar grove. 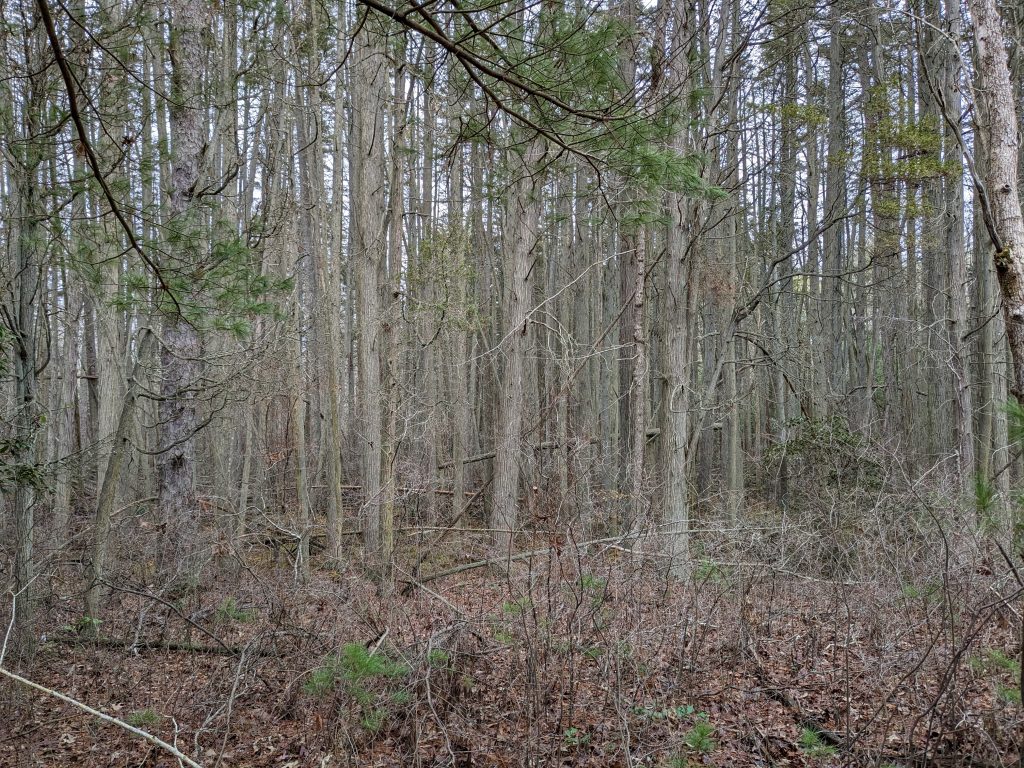 At the northern part of this loop you will come to ruins of the Civilian Conservation Corps camp. 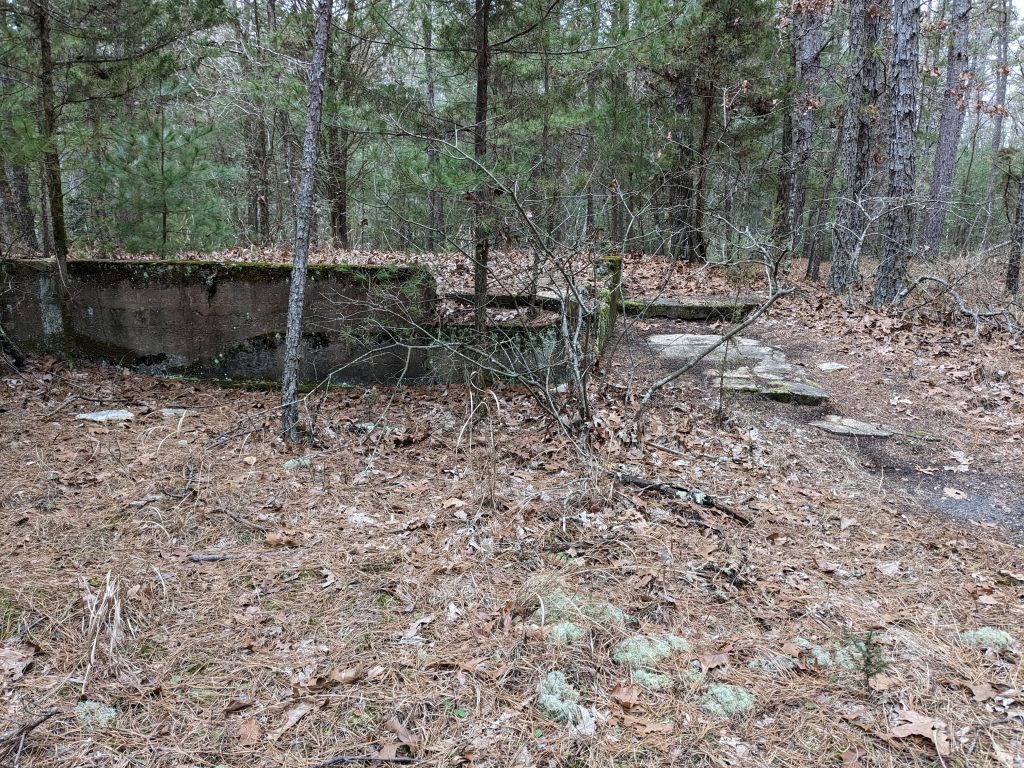 And just past the ruins you will come to the Forest Fighter Memorial which has signage regarding two major forest fires; and memorializes lost firefighters in those wildfires.  I had been to this memorial driving home from Batsto Village. 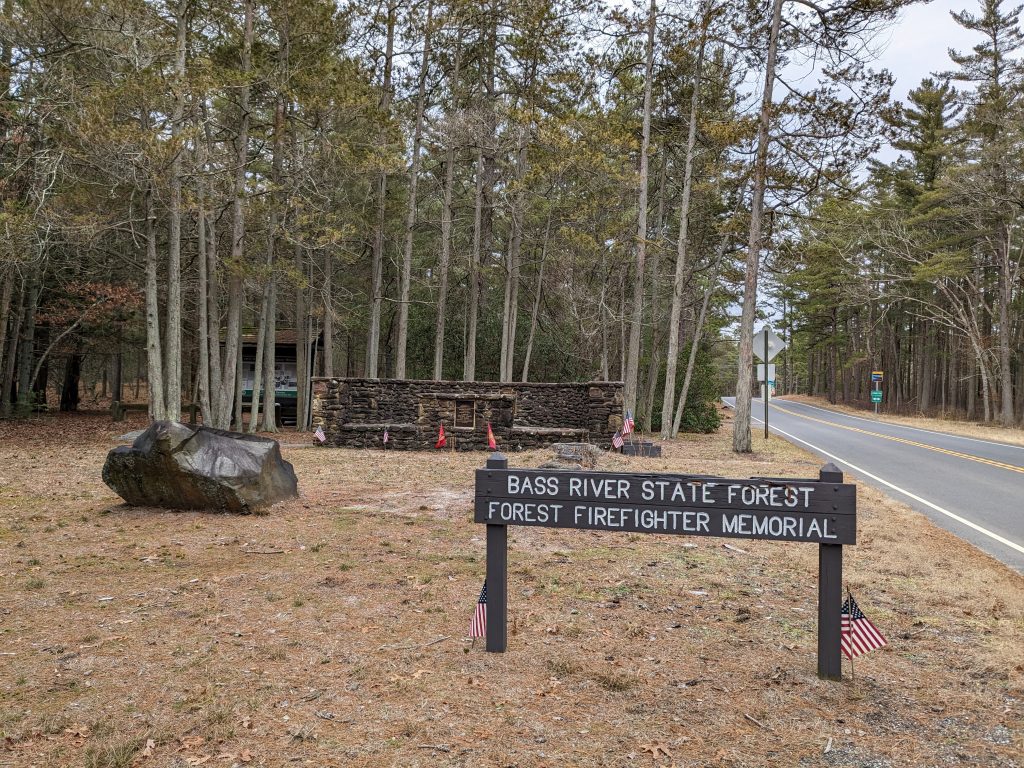 Coming back to the main junction, I followed the CCC trail back to my car.  The trail follows the park road and goes over a small bridge.  From the bridge I could see the southern portion of Lake Absegami. 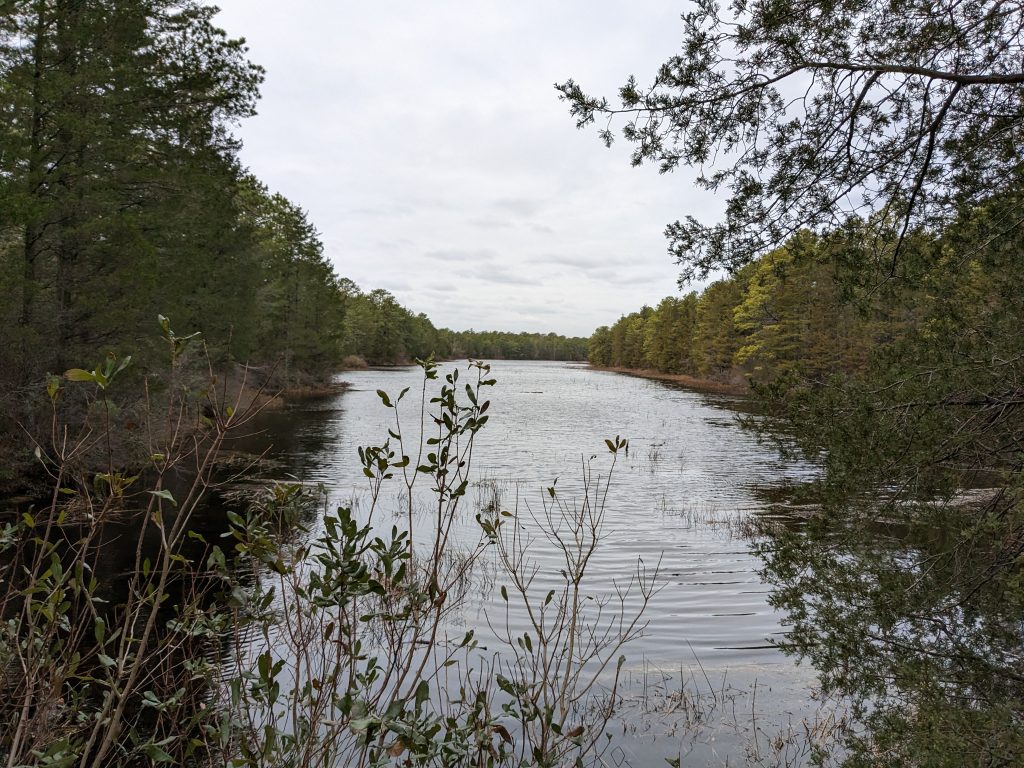 And across the road, I could see where the lake drained into Faulkinburg branch. 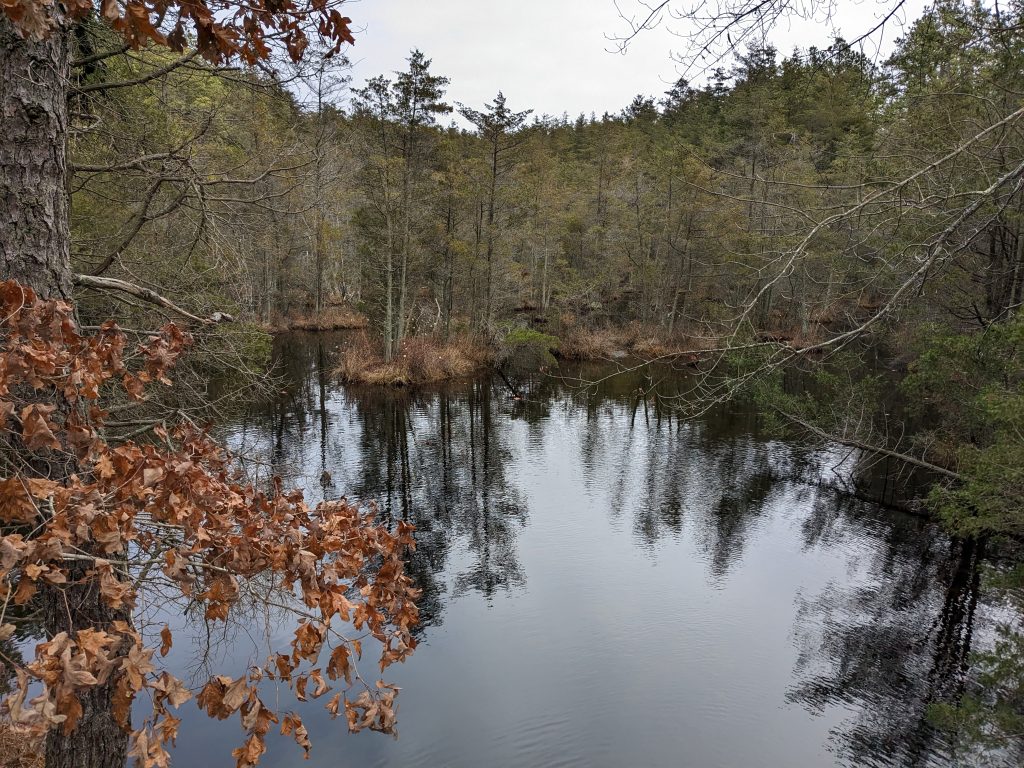 I didn’t know that there were campsites here, so I will have to return to check out the camping.  Certainly, it won’t be long backpacking, but it is close enough to home to warrant checking out. 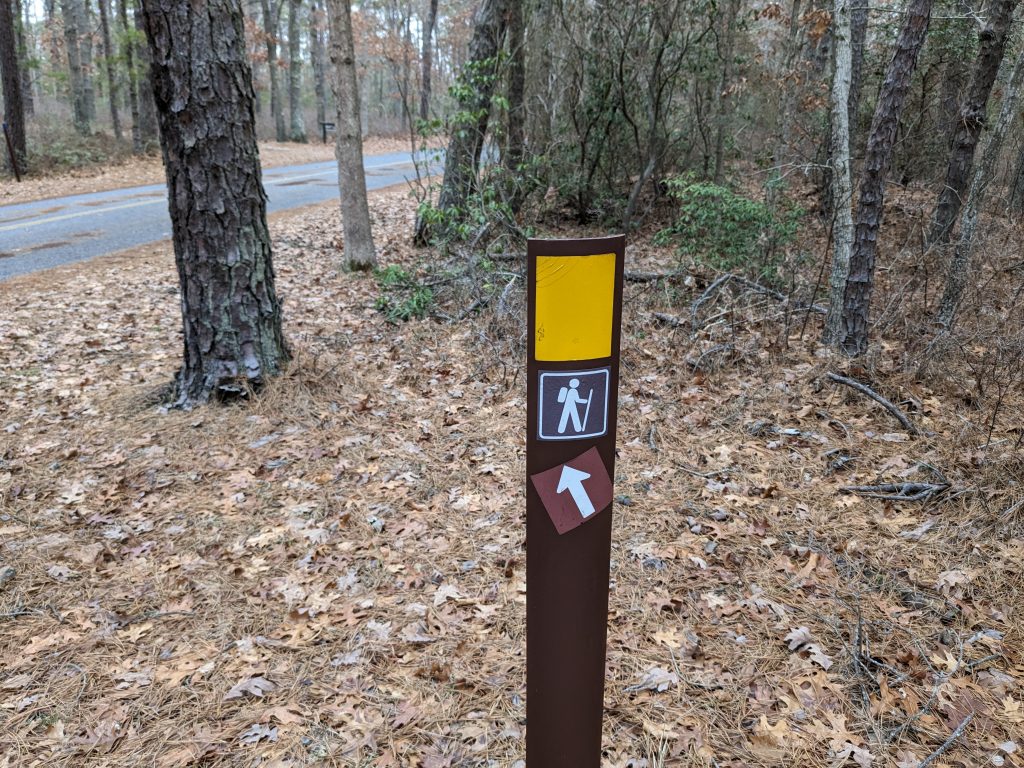 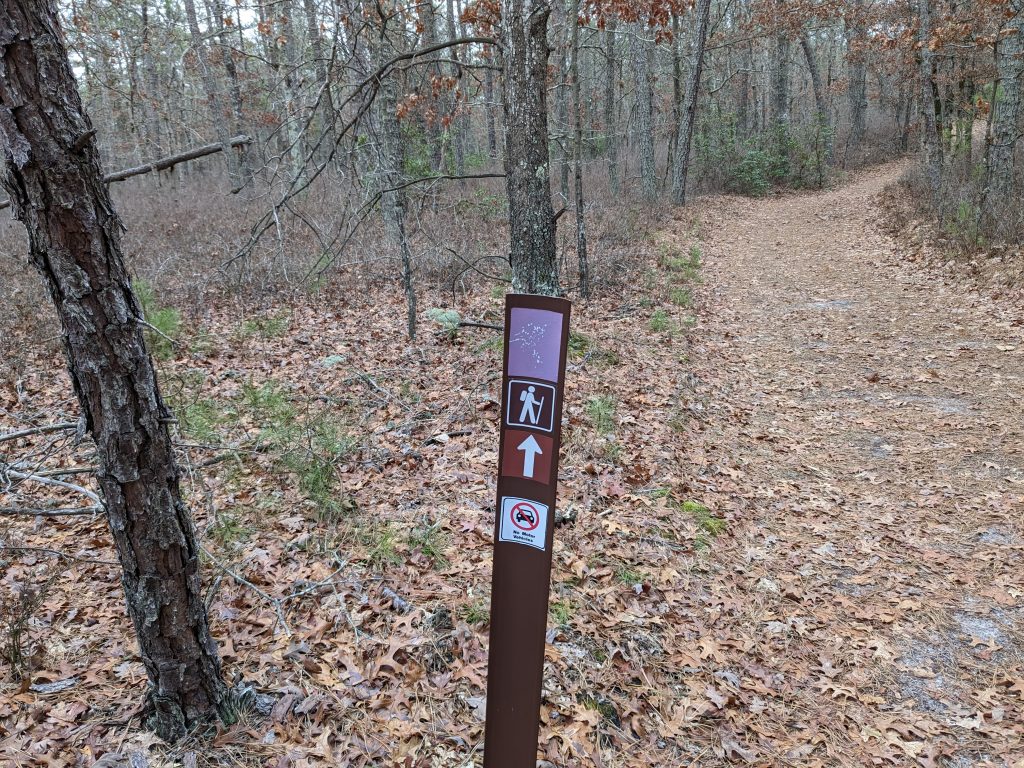 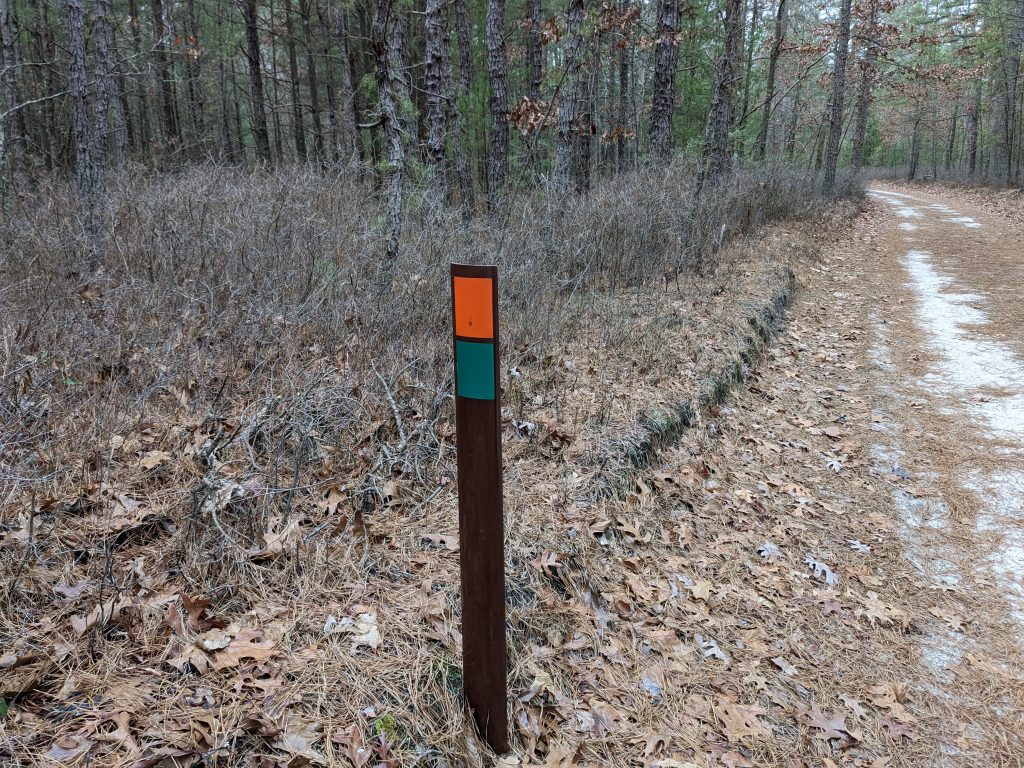 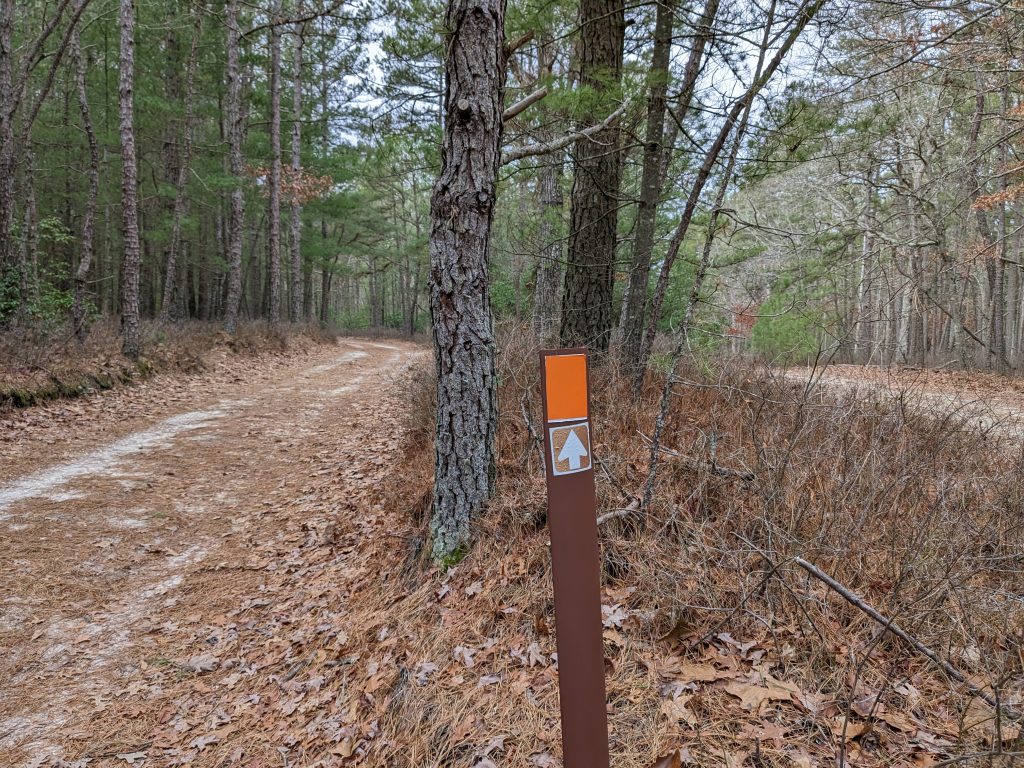 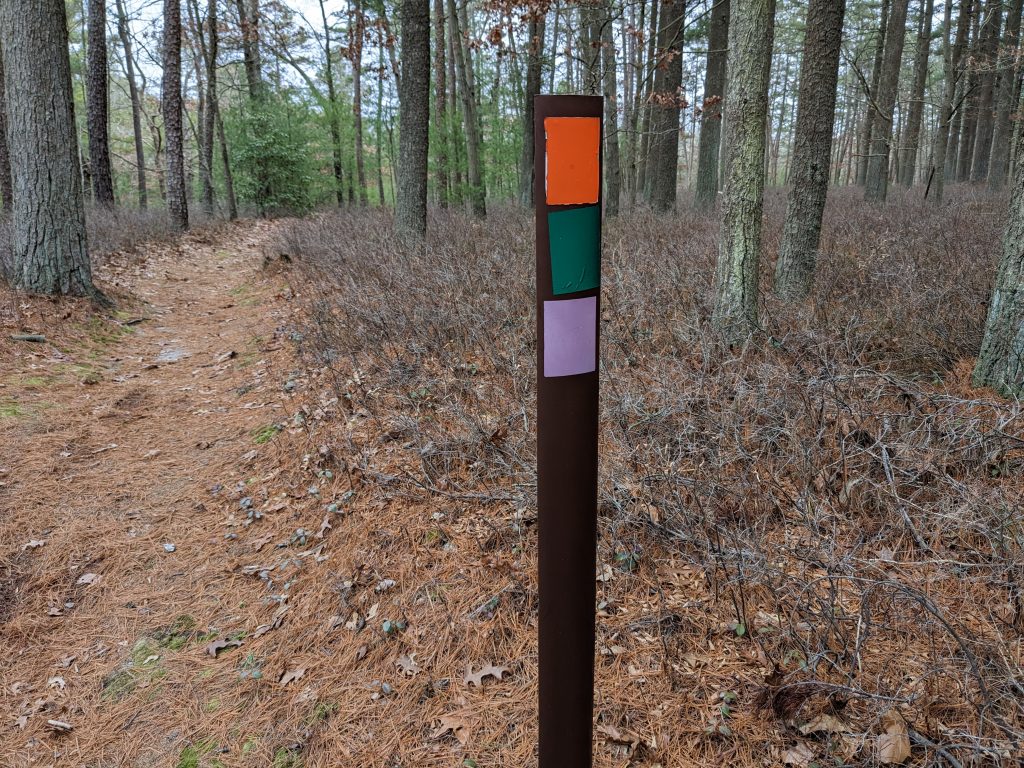 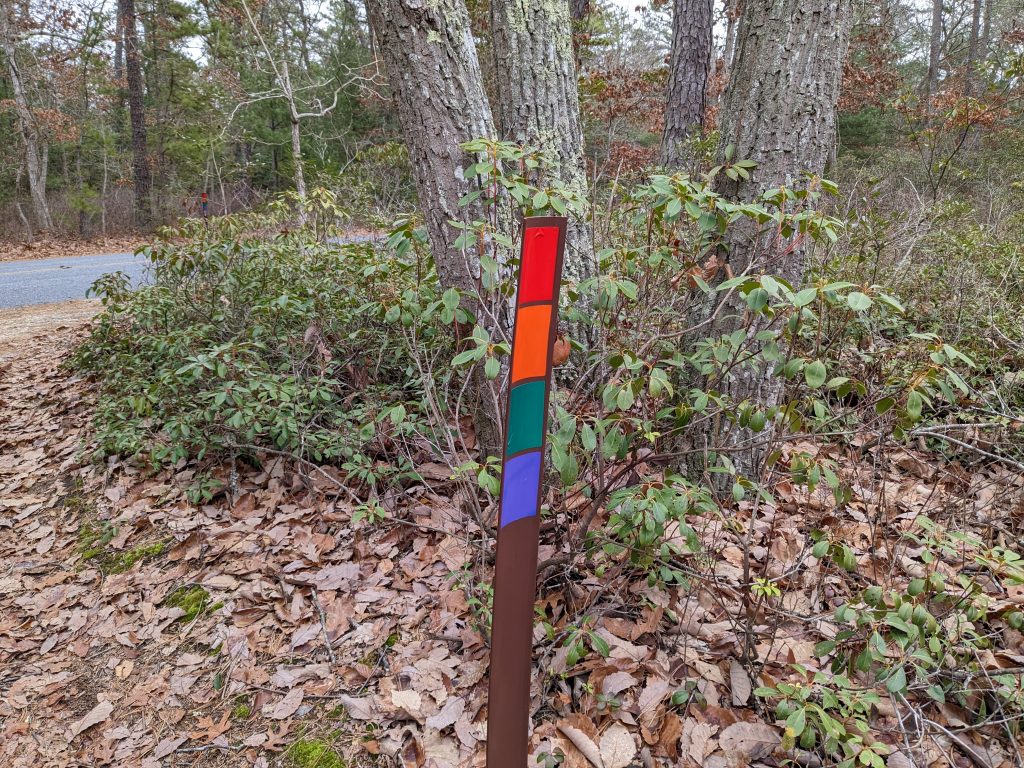