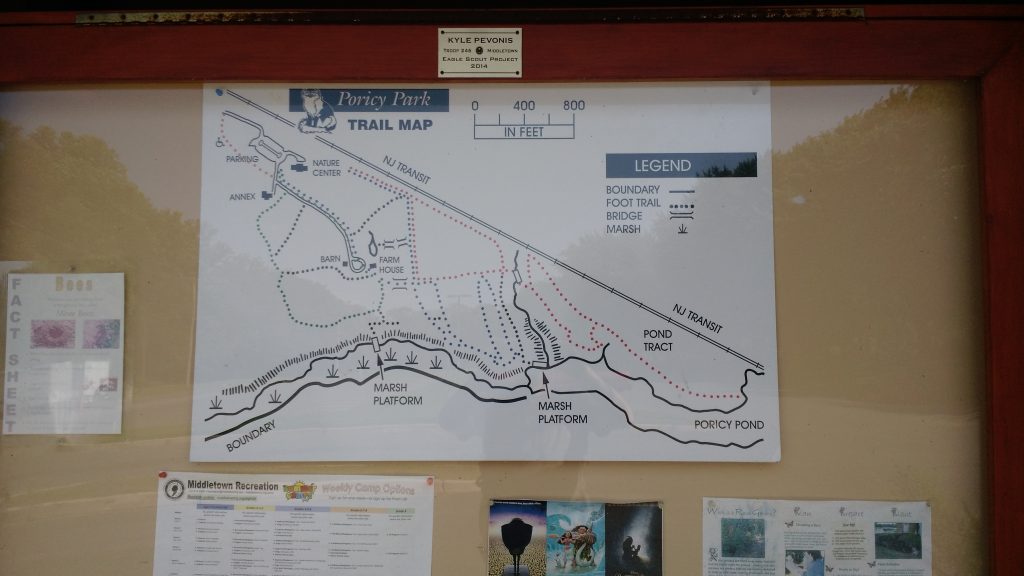 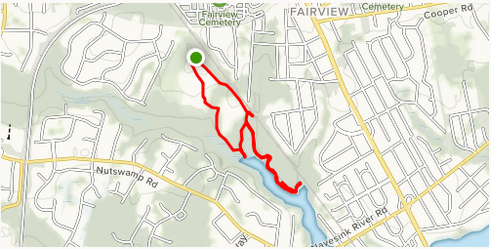 It was icing on the cake that I was able to grab a hike today, and while it was shorter, there were definitely issues.  My son’s game, then practice was canceled.  Had I known that on Friday I would have planned a much bigger hike, but I didn’t know until yesterday, and I only had a couple of hours – and Poricy Park is a few minute’s drive away.

I had the place to myself on a sunny day that started out nice but became hot by the time I decided to hike.  The car showed 88 when I was walking to the trailhead.  My plan was to take the blue trail to the red, walk along the tracks, loop by the pond, take blue to a platform overlooking the pond, then finish up on blue (maybe green) back to the parking lot.  Starting out, the trails look like: 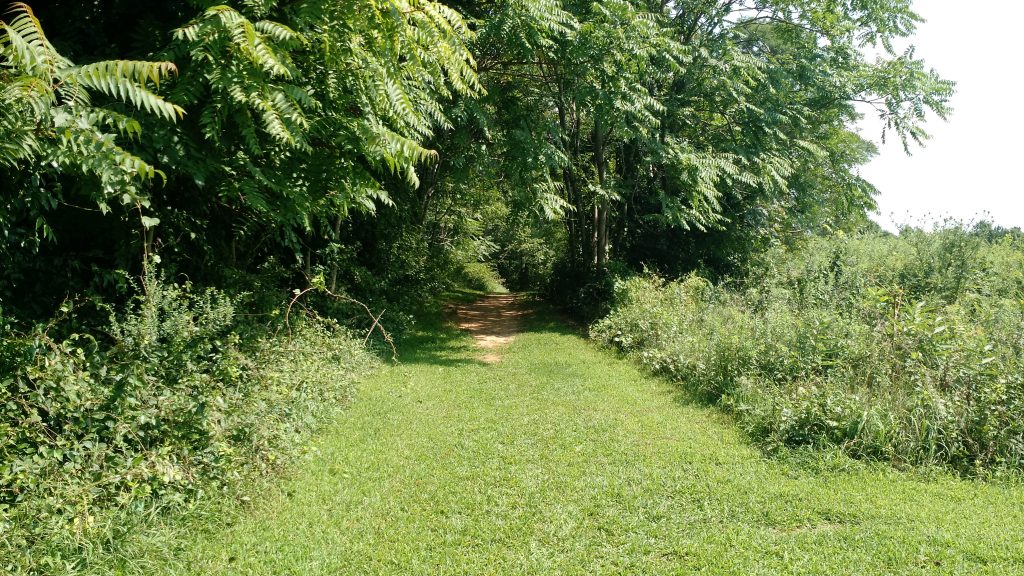 This is great, and easy to walk.  However, there are NO signs, blazes or marks of any kind.  There are poles with numbers on them, but they did not correspond to my map.  Maybe they corresponded to a trail map that was supposed to be available, but I did not see any.  As I cut over to red, to parallel the railroad tracks, I ran into: 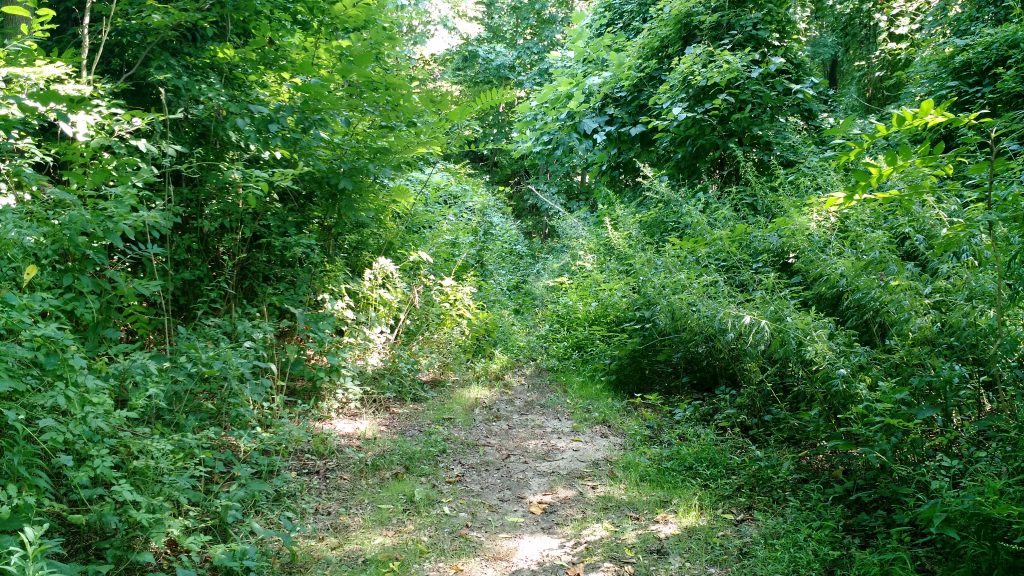 Even though I was wearing long pants, I wasn’t venturing into that.  No way.  A little backtracking got me to: 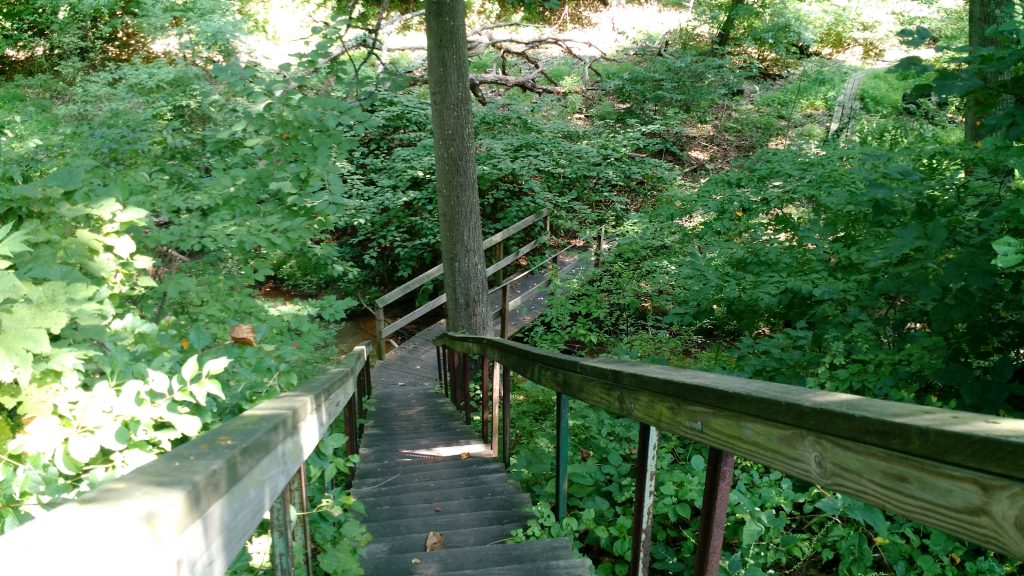 After the boardwalk, there were stairs going up the other side: 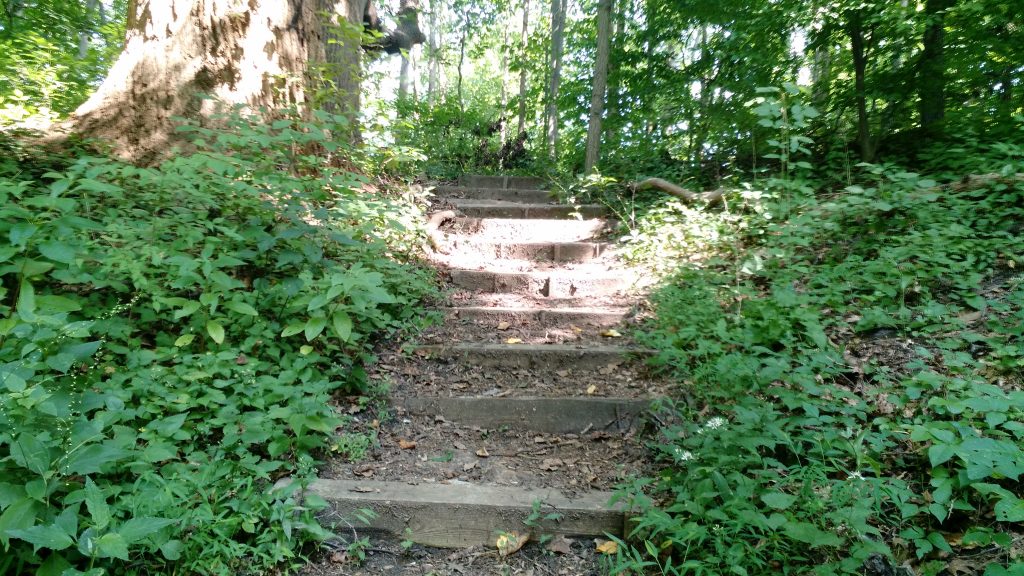 At this point the trail became more “woodsy.” 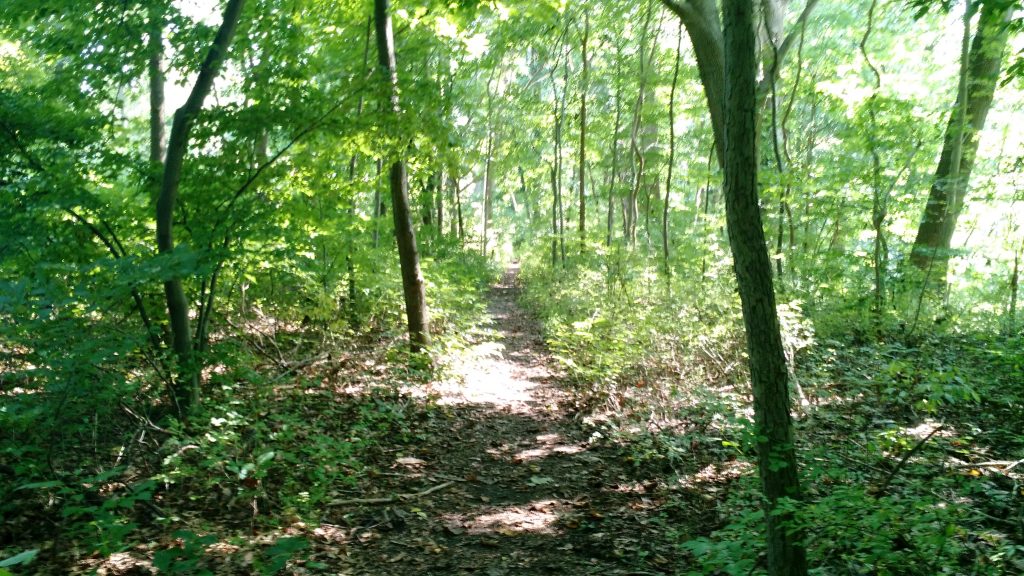 Following this for a bit opened up some great views of Poricy Pond. 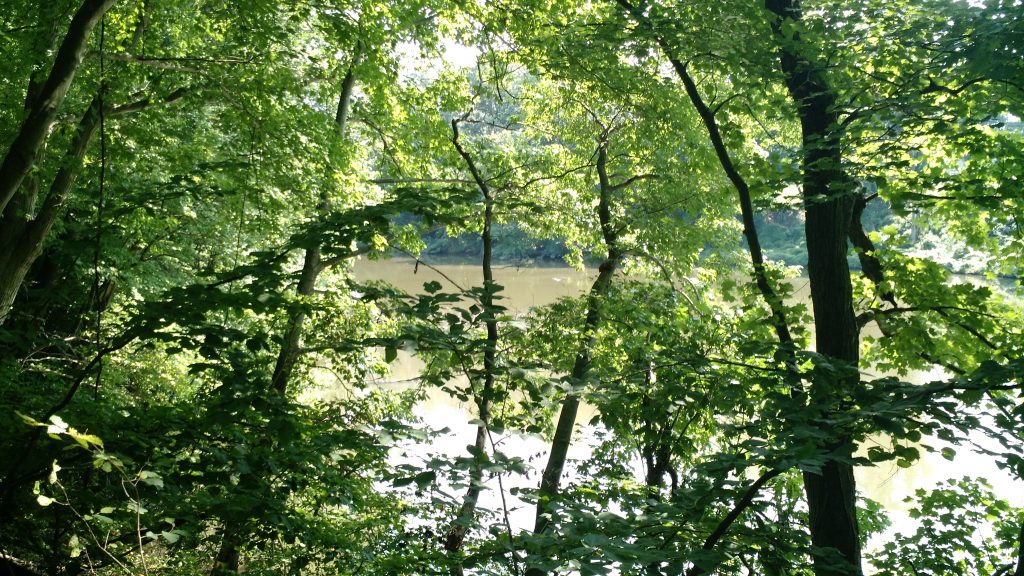 I followed this to the end and was anticipating a loop, coming back closer to the tracks.  Unfortunately: 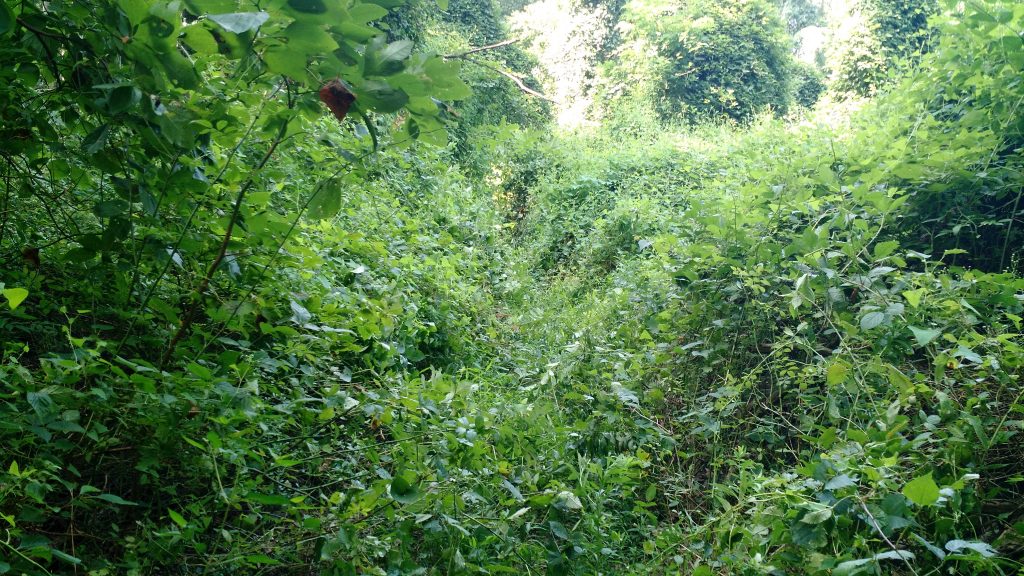 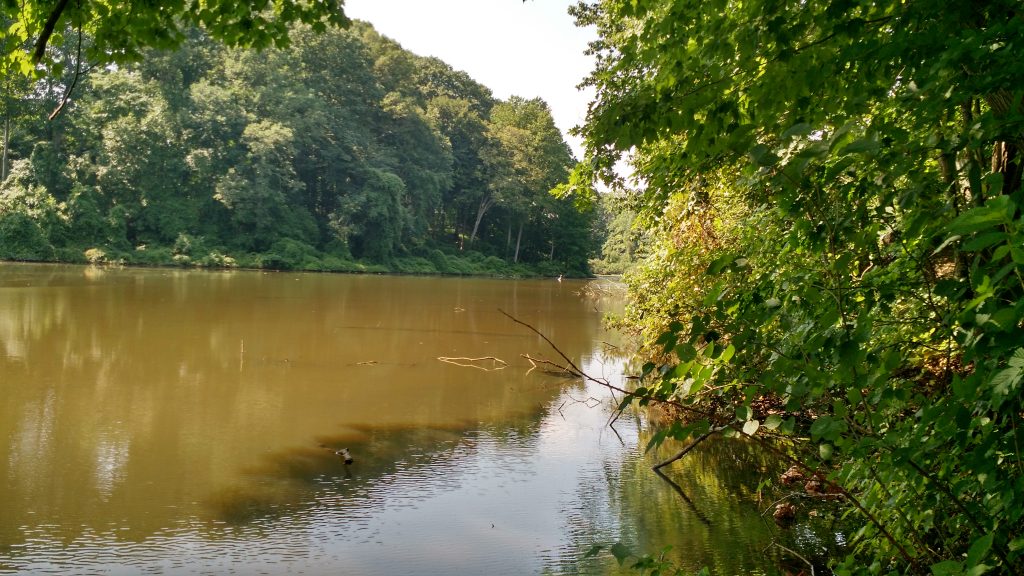 On the way back, I ran into a couple of freshly cleared areas where a “stage” and some benches had been erected. 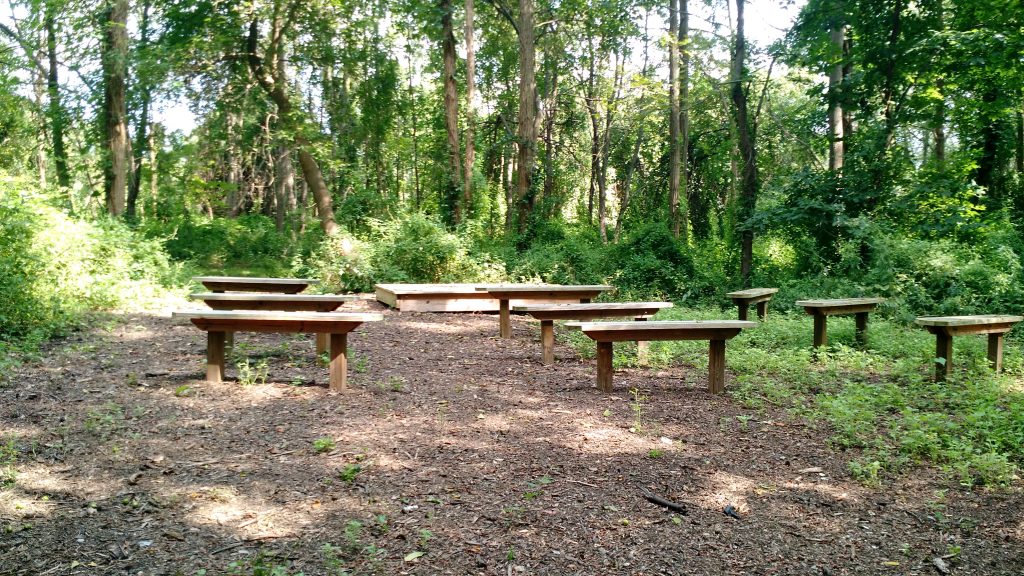 There were a couple of these spots, and they were not on my map.  I made my way past the farm house and the barn and crossed a brook on my way. 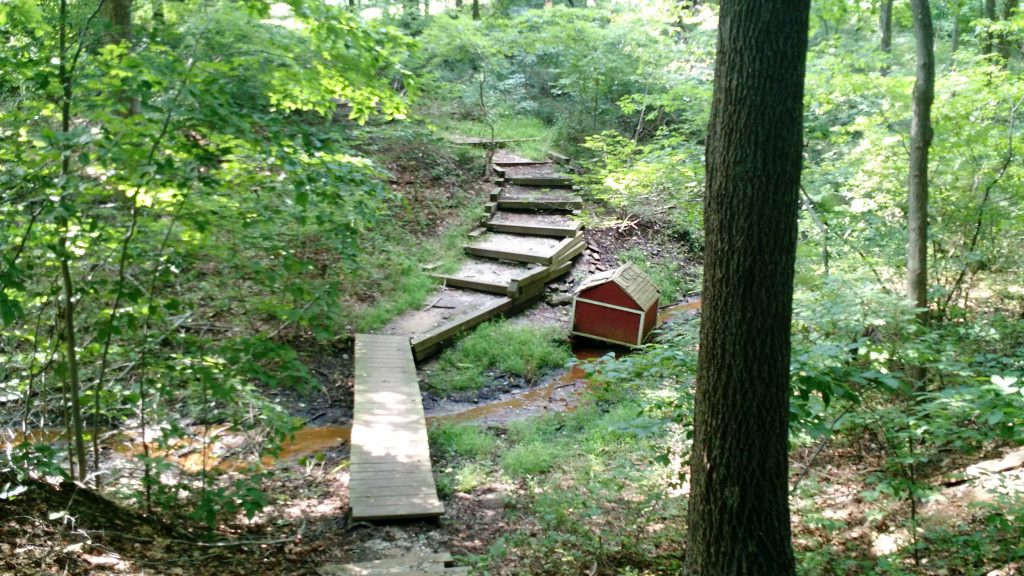 For the last bit, I followed a blue/green trail back to the parking lot. 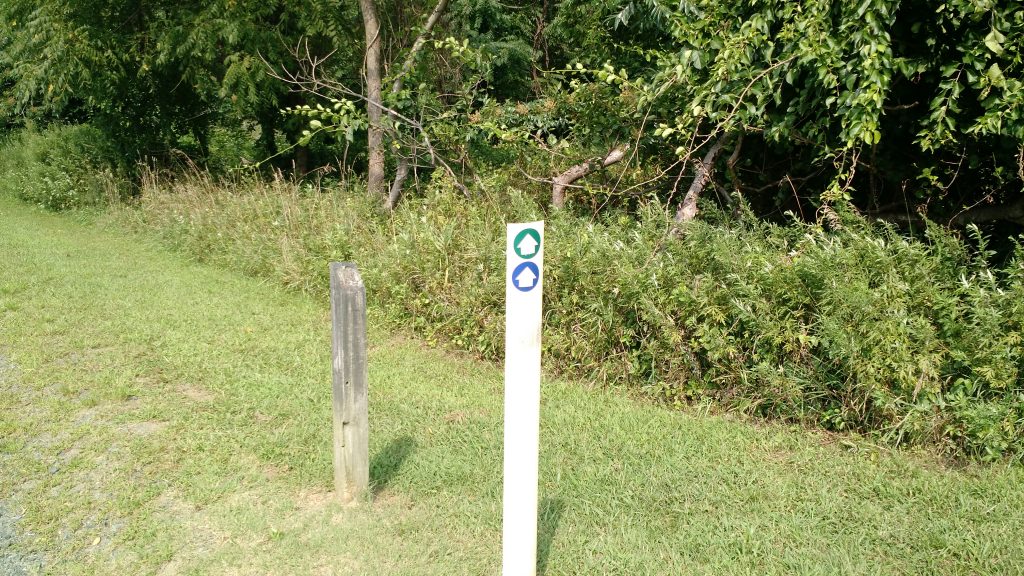 I saw one other sign on the entire hike.

This was a nice little walk despite no maps available, very poor trail conditions on the Riparian trail near the tracks, and no blazes.  The green and blue trails were wide and grassy, and you probably couldn’t get lost.  Red was iffy at best.  I would only recommend this if you are looking for a short, quick hike.  As for wildlife, butterflies were all over the place.  And I saw a few rabbits and squirrels peeking out from the underbrush.  At one point, a black cat was sitting trailside, but as I approached, it darted off.  (I probably should have guessed that was an omen.)

Ticks: 0 (And this is surprising, the last time I was here, I was covered in them.) 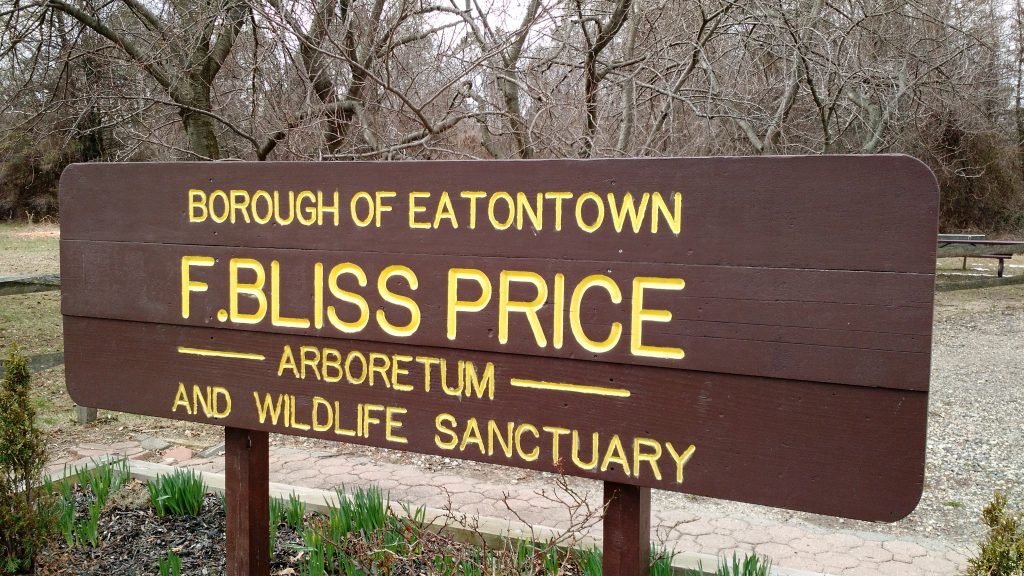 On a pretty cold March day I did not have anything to do (for once) so figured I would take a quick hike.  I’ve driven by this park hundreds of times and decided I’d like to hike the grounds and see what is actually there.  I’ll say, the arboretum is much bigger than I though and goes much deeper from the roadway than it appears.  Here’s my walk:

The park has very wide dirt trails with occasional trails of grass.  The park is an arboretum, meaning there are lots and lots of trees, though trails sometimes meander around and through the trees, and sometimes cut through fields.  I walked the exterior before I explored the center.  In the back of the park there are monuments at the base of trees dedicated to many volunteers and supporters of the park.  And, many of the perimeter trails skirt residential areas. 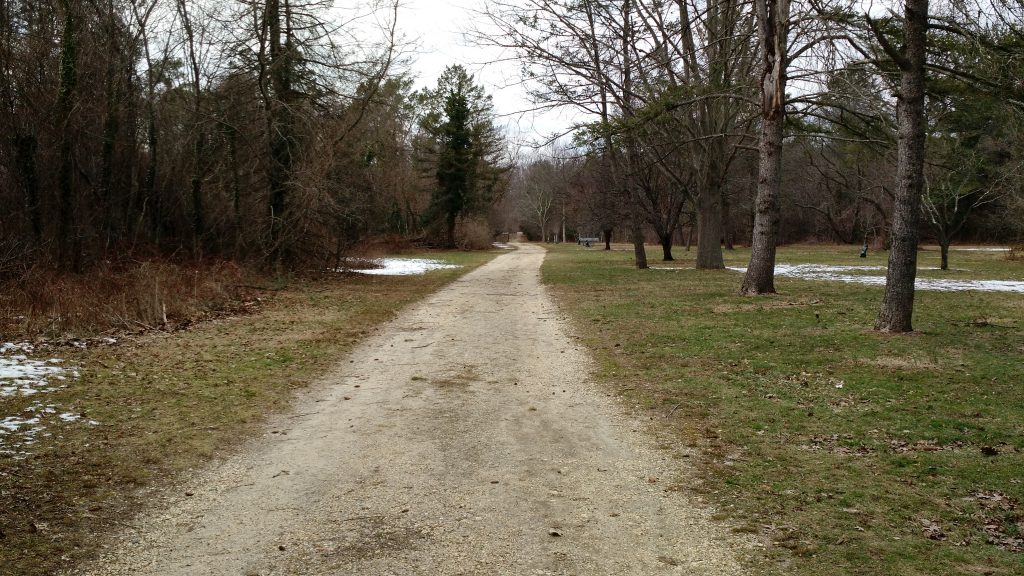 The month of March saw many days of snow, more than seemed normal. 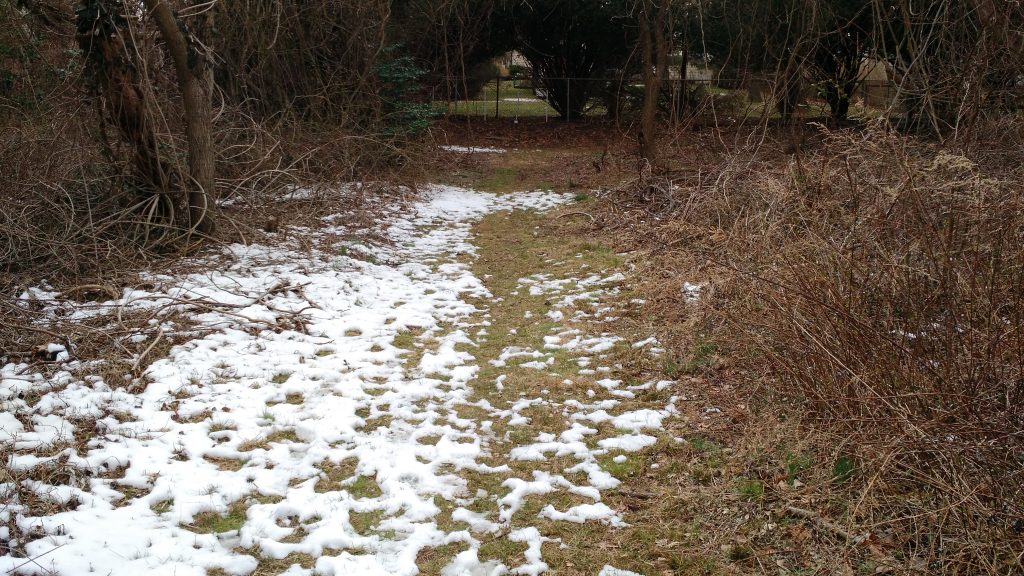 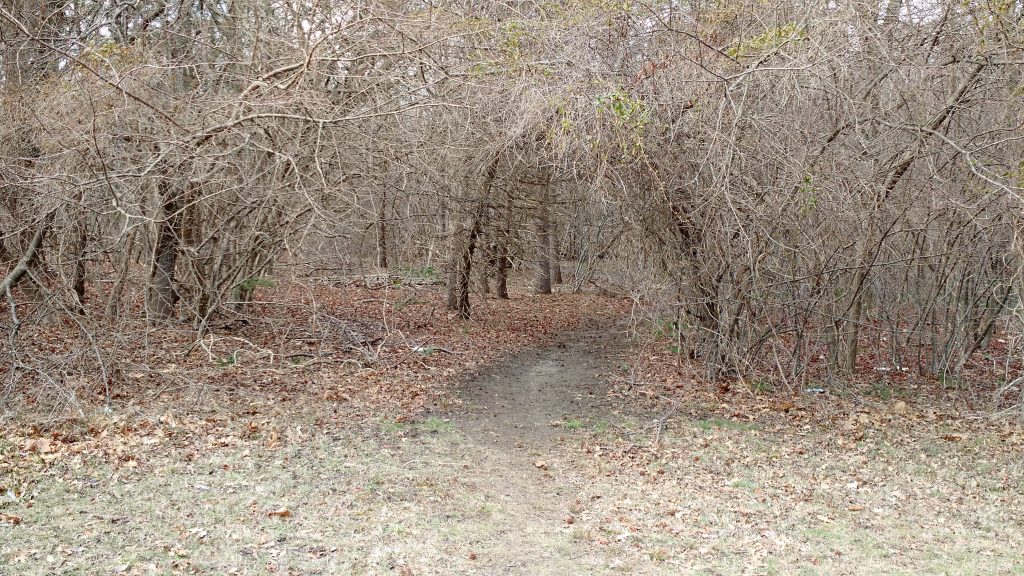 I didn’t know there was a creek running through the park. 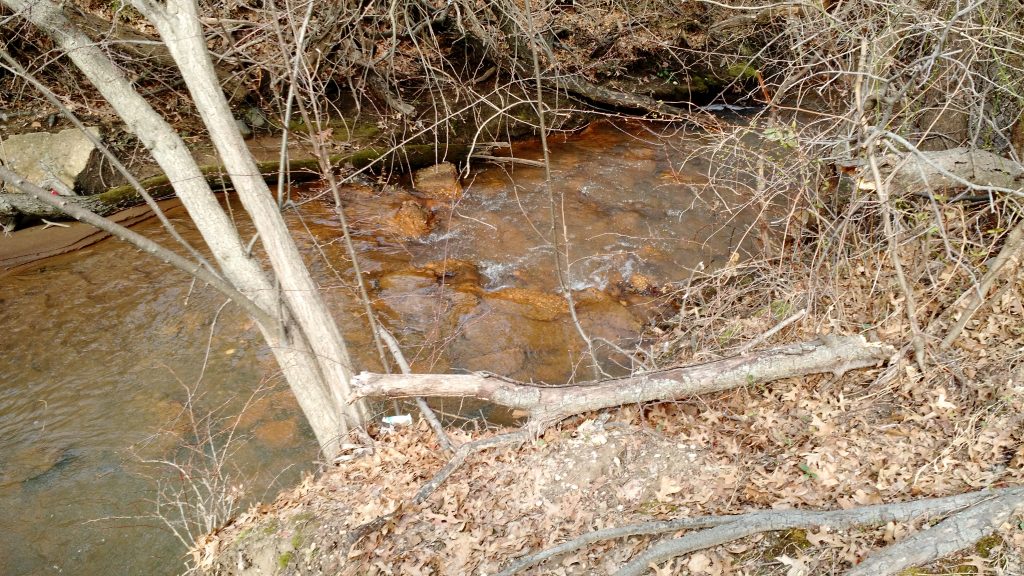 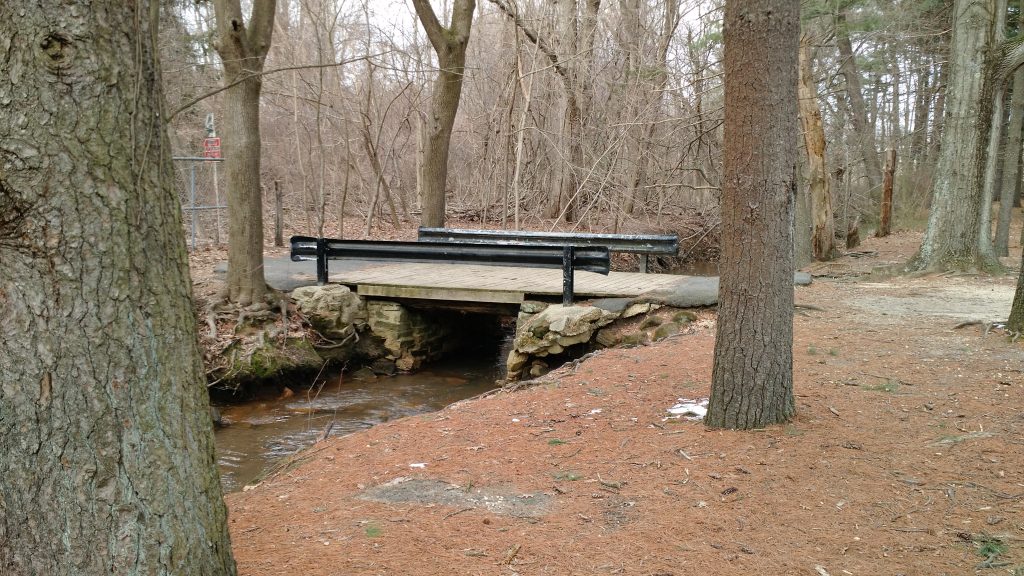 Towards the back of the park there is a definite change, the trees seem older. 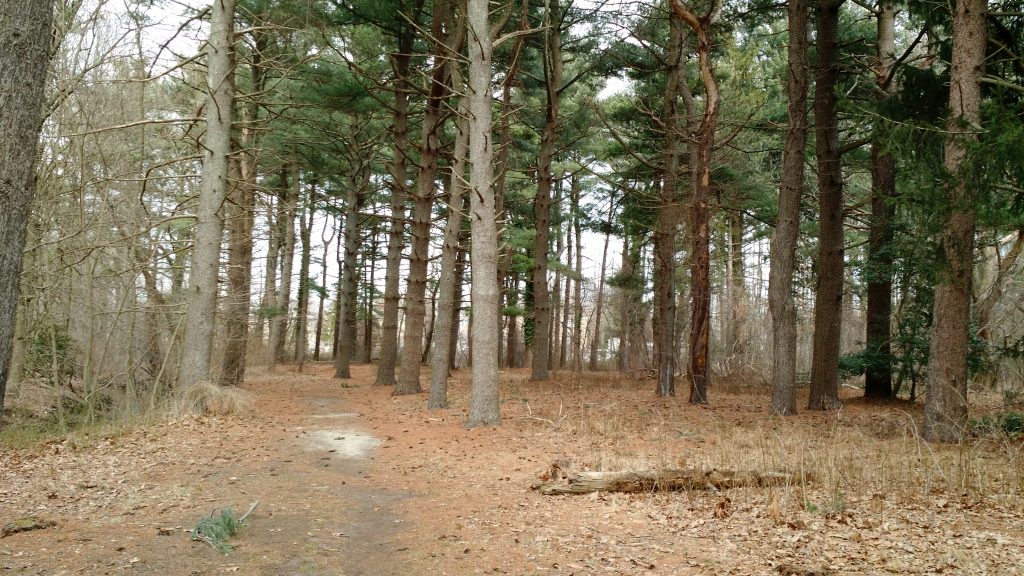 There is no trail map, not even a kiosk where you would be able to obtain one.  While the main trails are wide and it’s not hard to get lost you do need to keep an eye on where you are walking.  At one point I turned on to a small trail and walked a while only to realize I wasn’t really going anywhere – I had stumbled onto a deer path.  And I wasn’t alone: 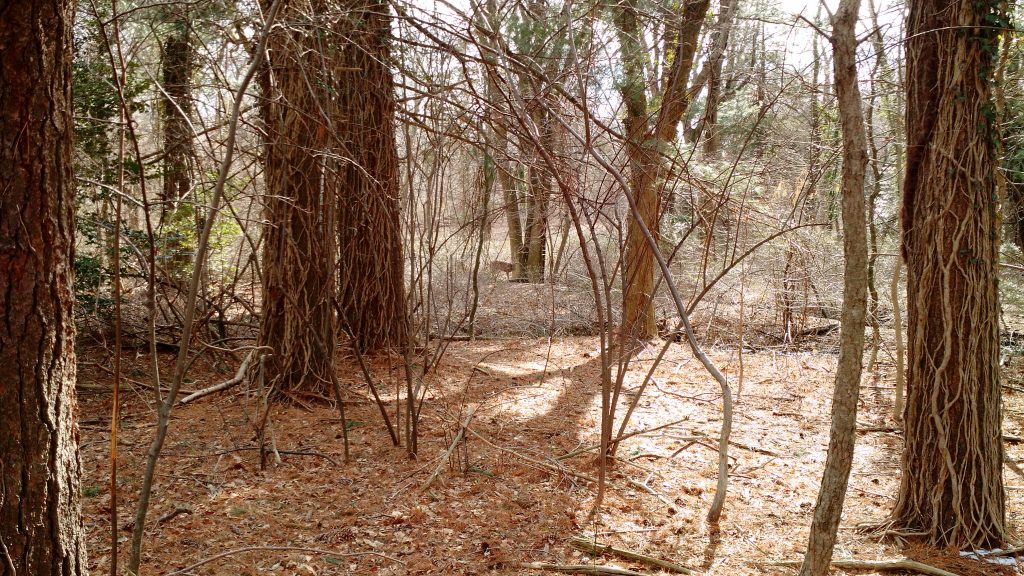 The sun started to show as I was nearing the end of my walk, and I would guess the temperatures had warmed up to the low 50s.  Many times I came to places where snow had melted and water blocked my path. 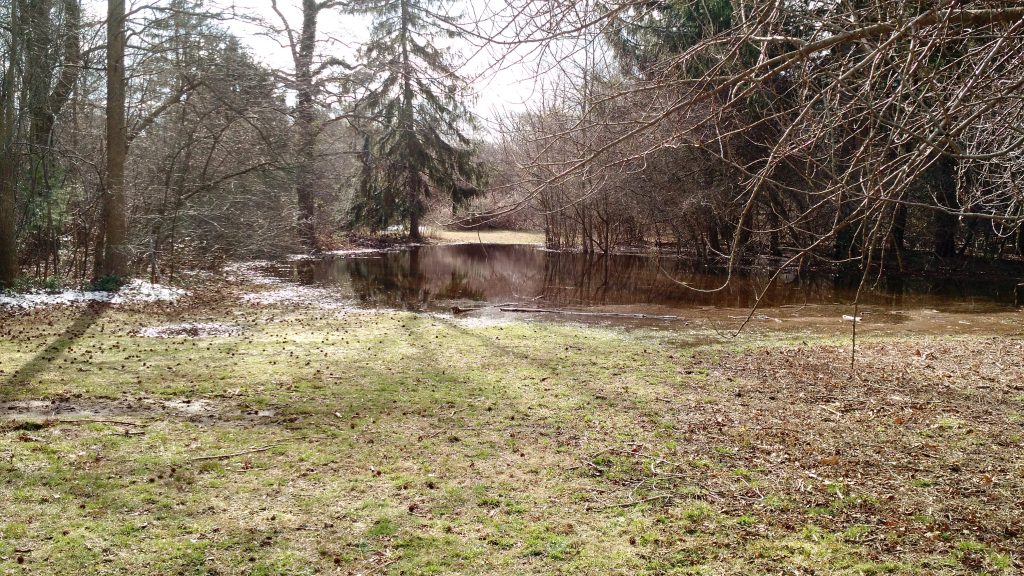 All in all, this was a great getaway for two hours or so.  And, I felt great to explore an area I was not familiar with.  If you are in the area and want to kill some time without any hills or any real challenges, F Bliss Price arboretum is worth the trip.

As I live near Fair Haven, I have driven by the Fair Haven Natural Area many times – seen the parking lot and wondered what really was in there.  Fair Haven lists the park on their web site, here, and after some digging, I waited for a sunny day with a couple of hours to spare in order to check it out.  Certainly, you don’t need much time.  I figure I walked no MORE than two miles; and that was going over some trails more than once.

There is a nice gravel parking lot with enough room for ten or so cars.  At the “trailhead” there is a good-sized board with a large picture of the trail map, along with other information about the park.  You really can’t get lost, the park is not that big.  And really, if you did, if you picked a direction and started walking a straight line, you would come to one of two major roads, a housing development, Fair Haven athletic fields, or the Fair Haven Methodist church.

However, this is a great place to get away for an hour.  Trails are wide, well kept, and mostly dirt.  Once a year Fair Haven hosts a day where the trails are cleaned up and maintained.  It is relatively quiet while walking the trails, though you will hear cars as you walk near the roadways and (in season) the athletic fields are well used.

My favorite spot in the park is the pond, which sits smack dab in the middle.  You can get to it easily from the parking lot, or you can amble around and run into.  What makes the pond enjoyable are the benches scattered around the perimeter offering nice views and a comfortable place to sit and watch the pond and listen to the wildlife.  While on my hike I could watch the turtles sunning themselves on logs.

Enjoy the park.  I am sure I’ll visit again, to warm up for longer hikes or just to get away for an hour or so. 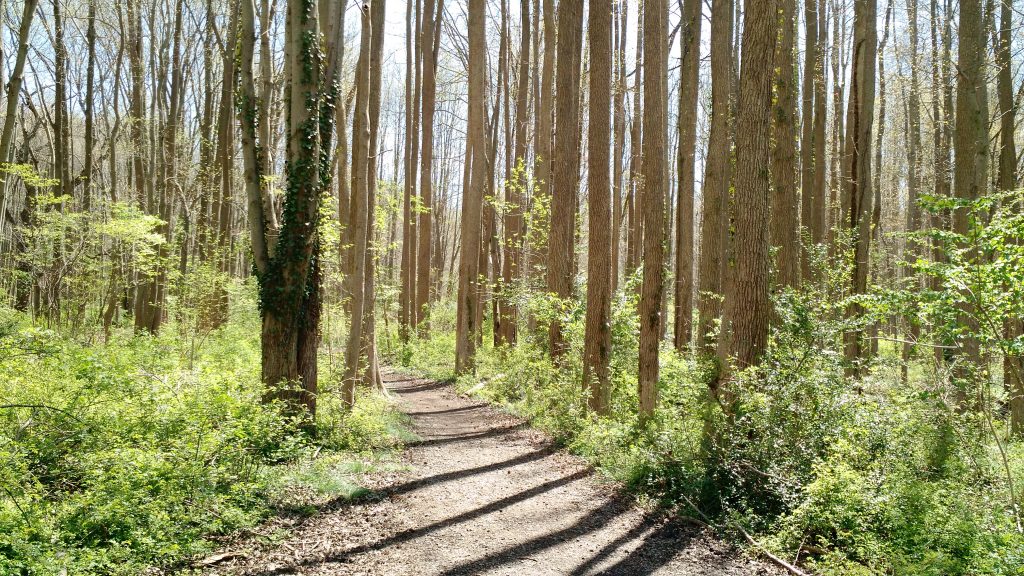 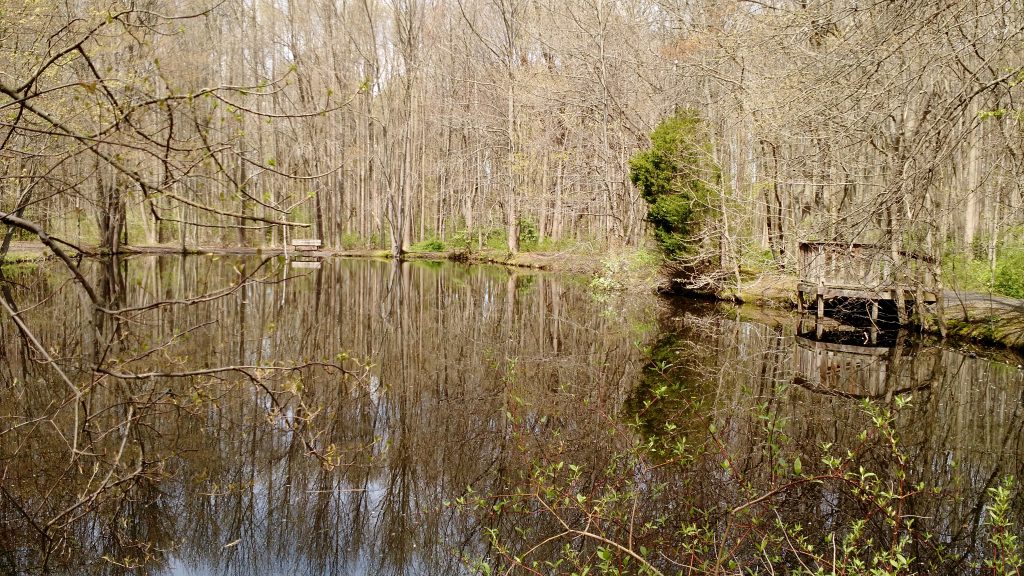 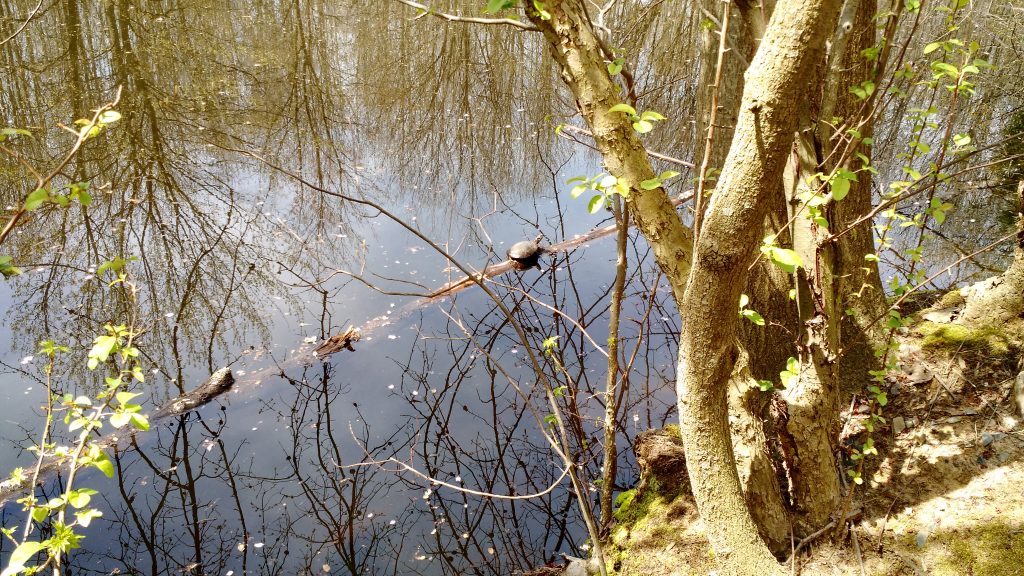