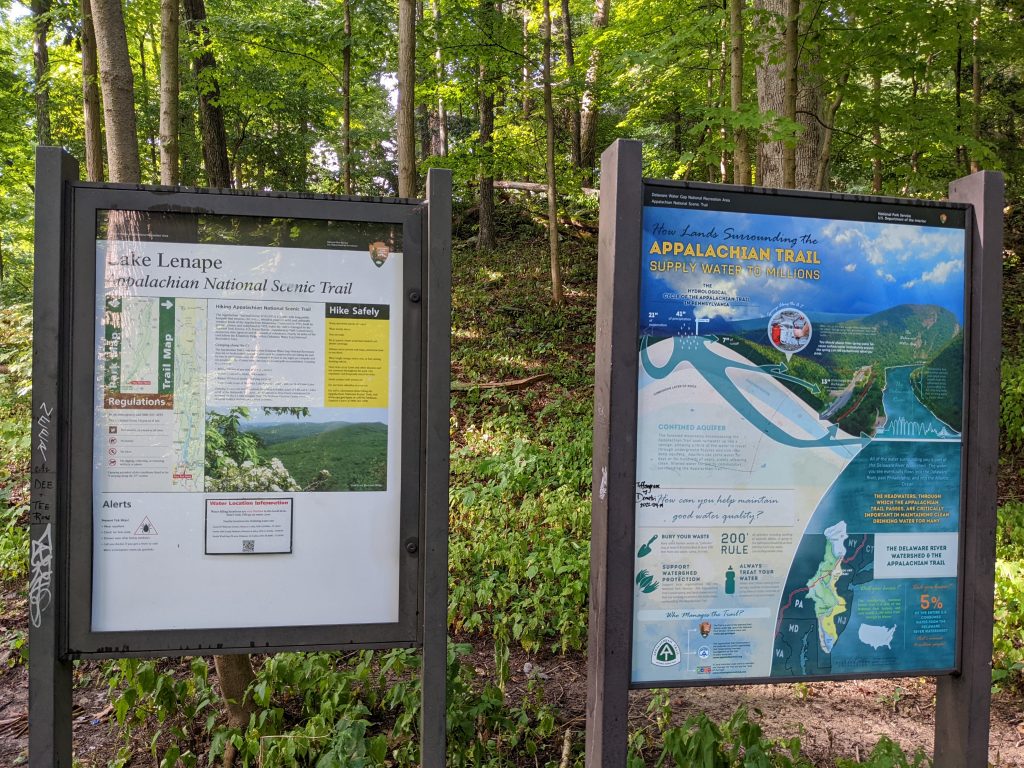 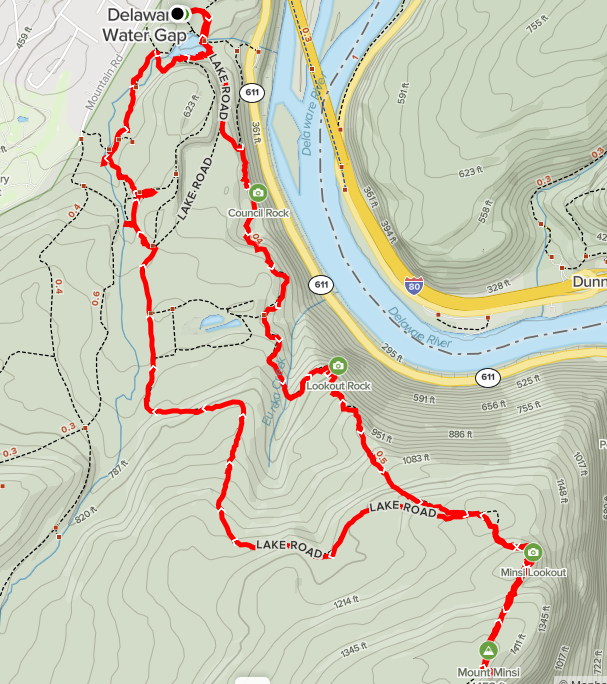 I have been on Mt. Minsi, but it was over 30 years ago.  And, we came from the ridge, I believe we climbed to the ridge at Totts Gap and we walked to the Minsi Lookout.  This time, I started at the Appalachian Trail trailhead in the town of Delaware Water Gap, which is a nice quaint small mountain town.  I got the last (legal) spot in the lot just before nine in the morning.  When I came back, there were cars all over the place.  And, there was trail magic in the parking lot.

The parking lot is right next to Lake Lenape, which was in full bloom of water lilies.  The AT is part of the Mt. Minsi fire road for a couple of hundred yards, so it is nice and easy walking. 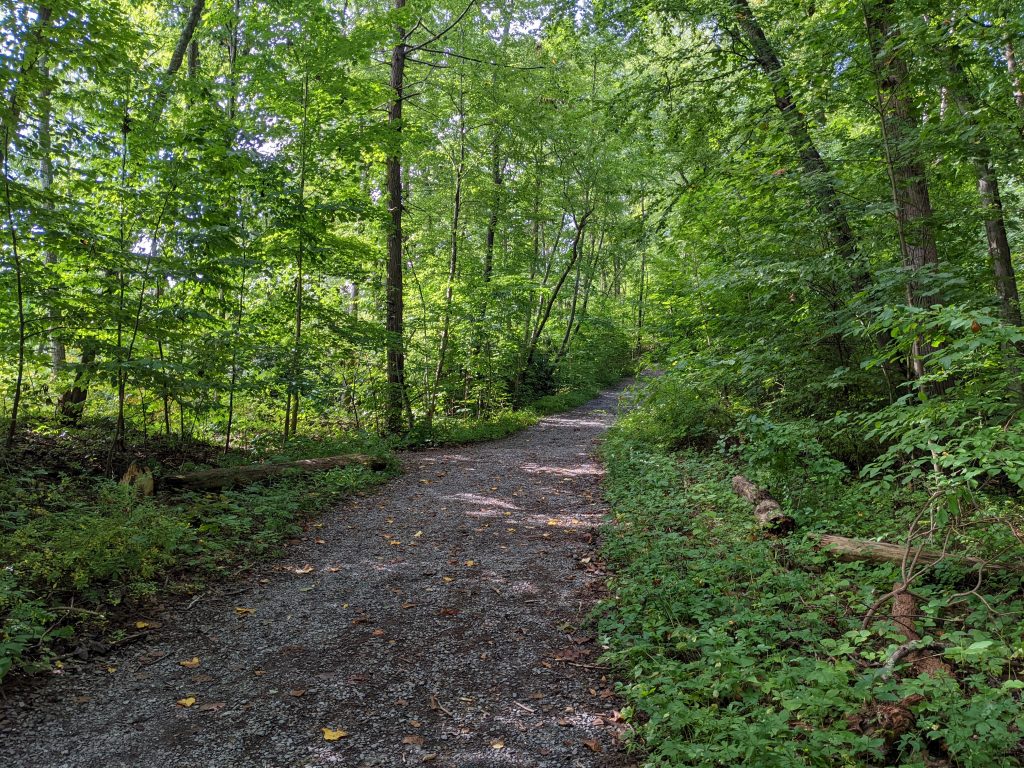 Once off the fire road, the walking becomes typical Appalachian Trail (at least for this section.) 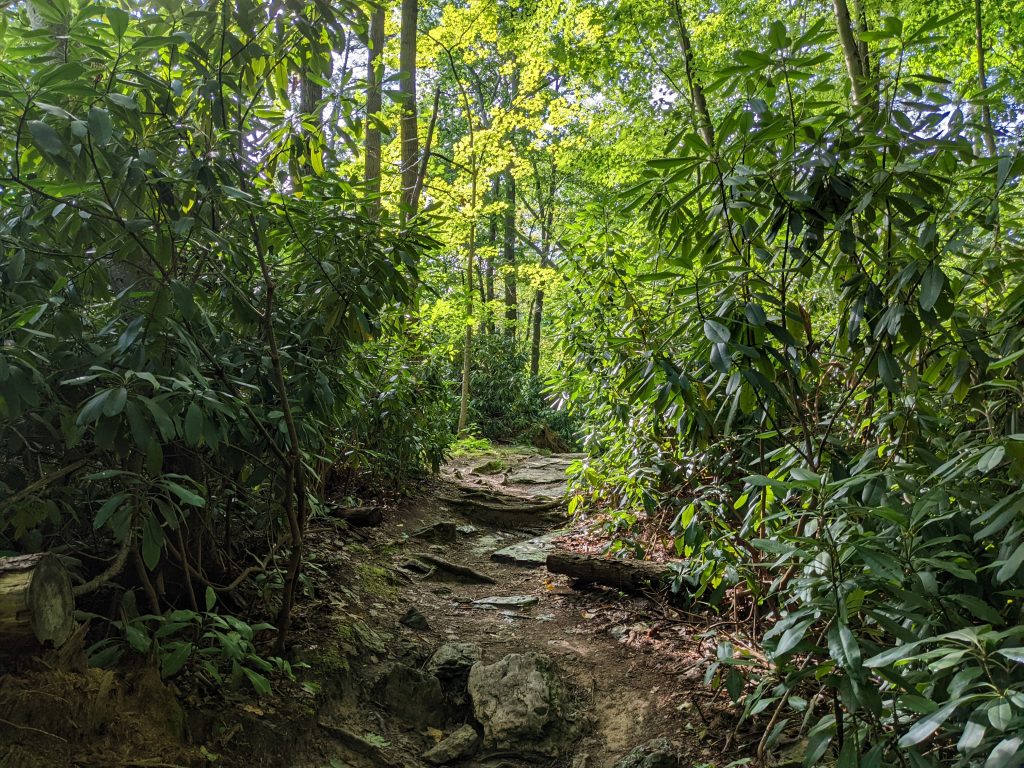 Crossing Eureka Creek was fun, the water was low, and the trail heads off into a small Rhododendron tunnel. As typical, there was Rhododendron all over the place. 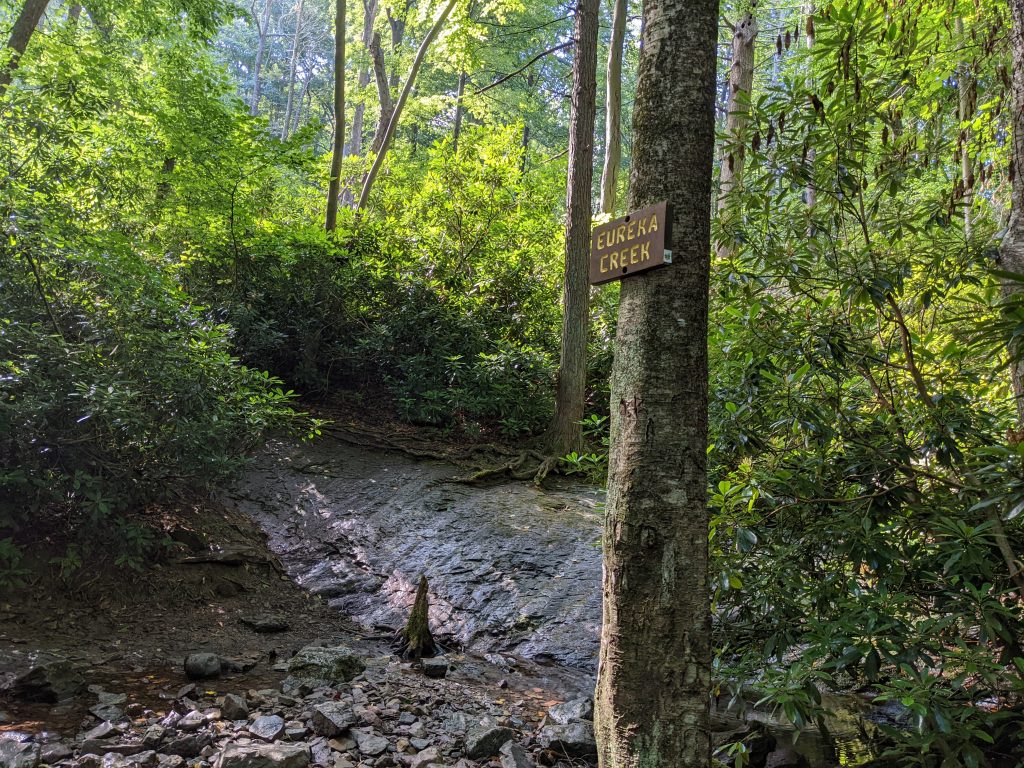 Shortly after, I zipped off the leggings of my pants – it was just too hot and humid.  After that I quickly made it to the first viewpoint, Lookout Rock. 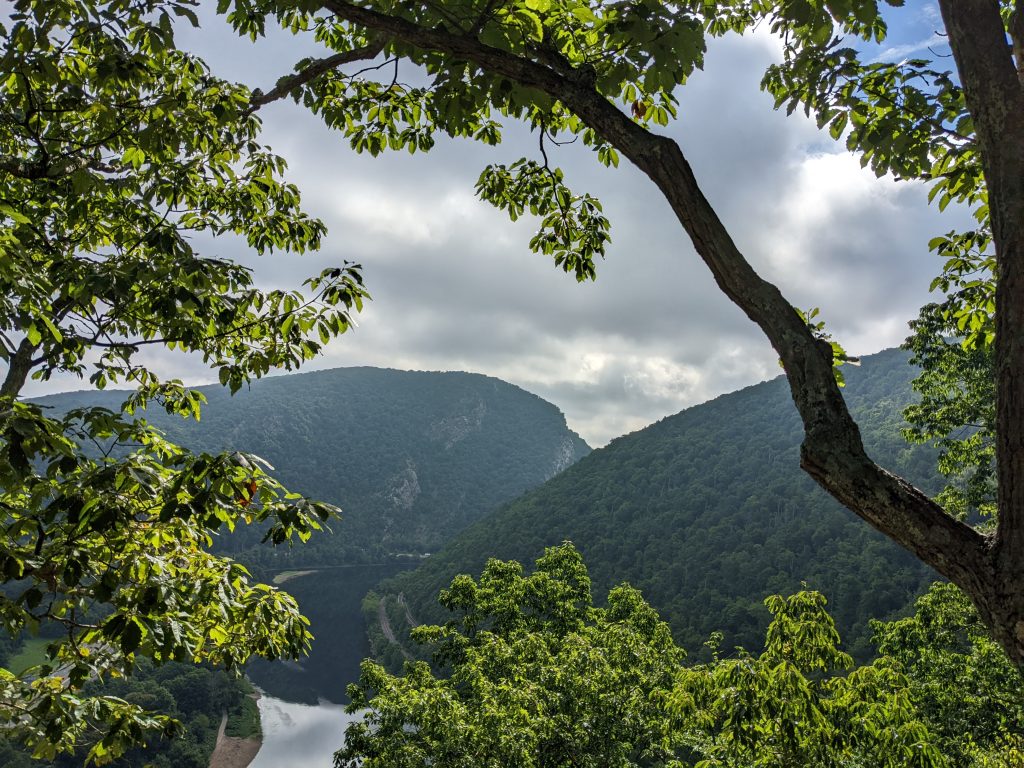 After Lookout Rock, it’s pretty much up and up and up until you get to the viewpoint looking across the river at Mt. Tammany.

Birch trees already have their leaves changing color.  I don’t want to think about that yet – it’s still August. 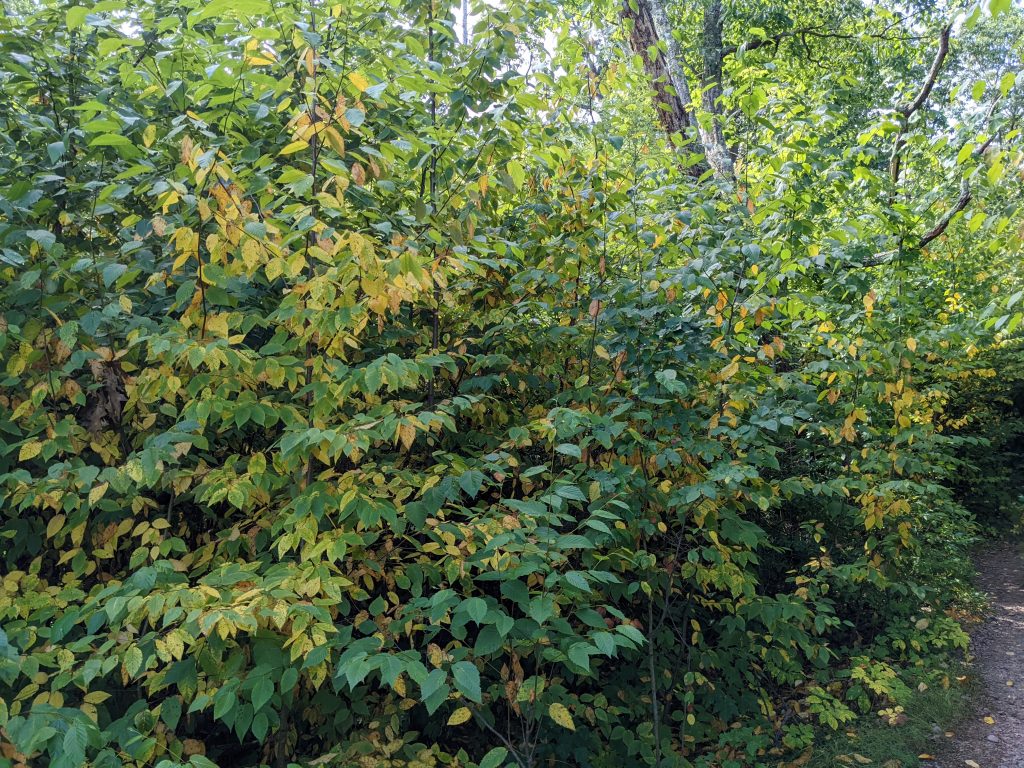 Getting closer to the next lookout is a long Rhododendron tunnel, that ends with a small scramble. 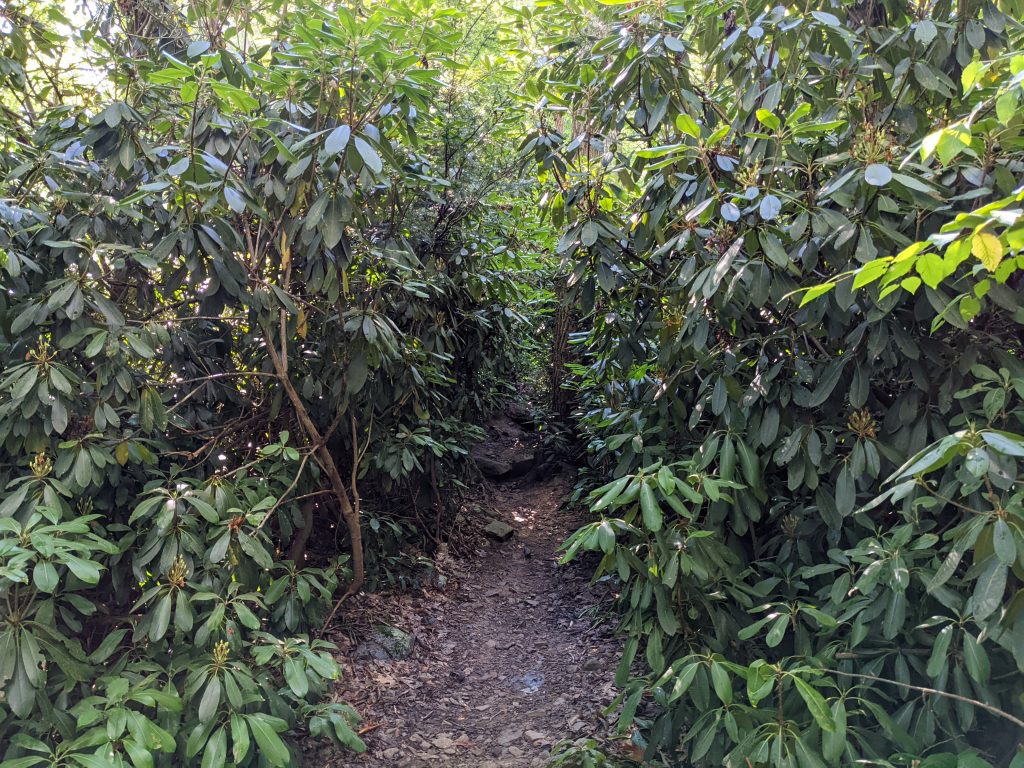 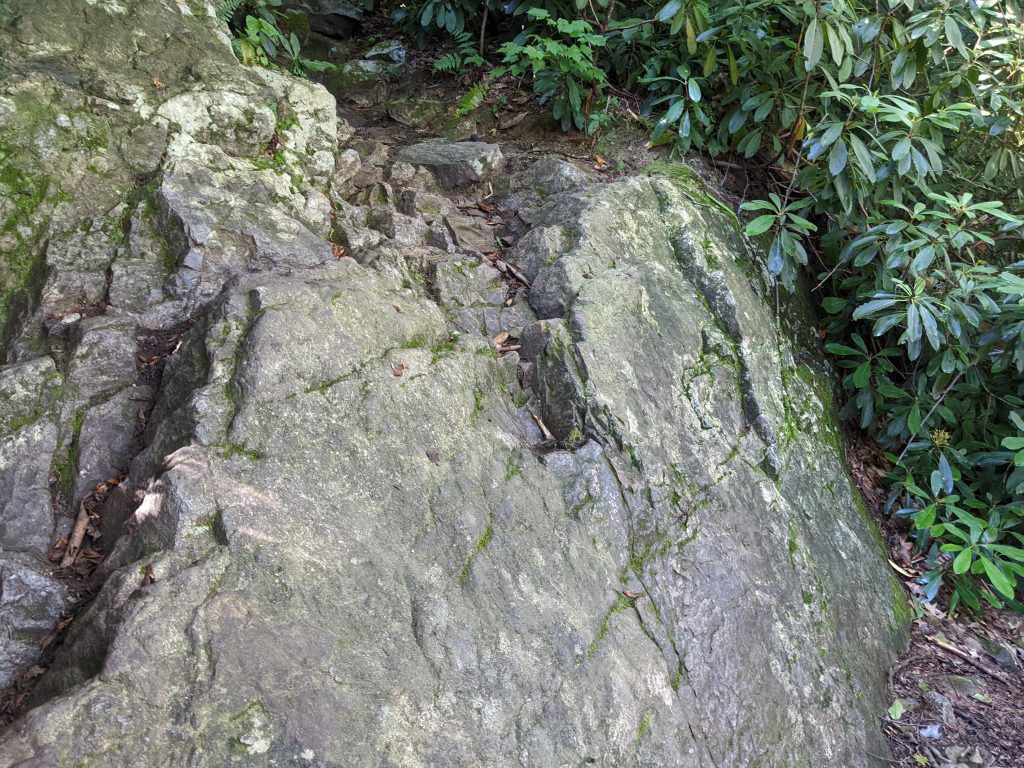 I made it to the overlook that looks east and towards Mt. Tammany.  However, there were ten kids making all kinds of noise at the overlook, so I headed off to the summit.  From that overlook to the top, it’s all uphill.  You’ll know you are at the summit as there is a cell tower at the top (?) and the remains of what look like a fire tower. 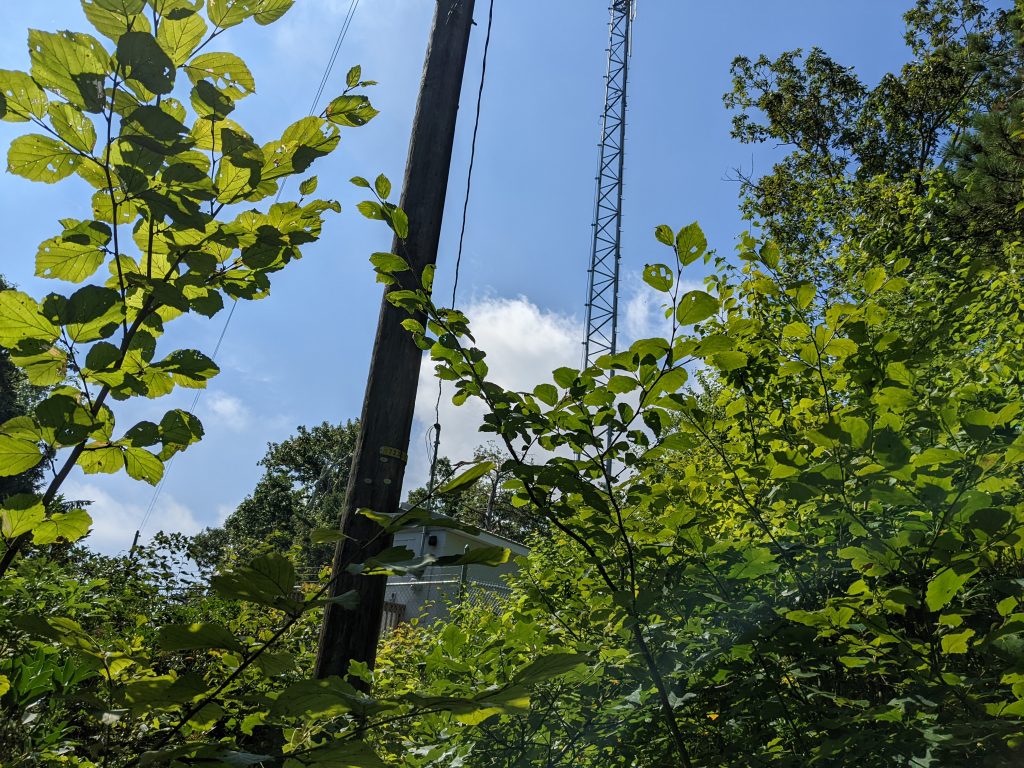 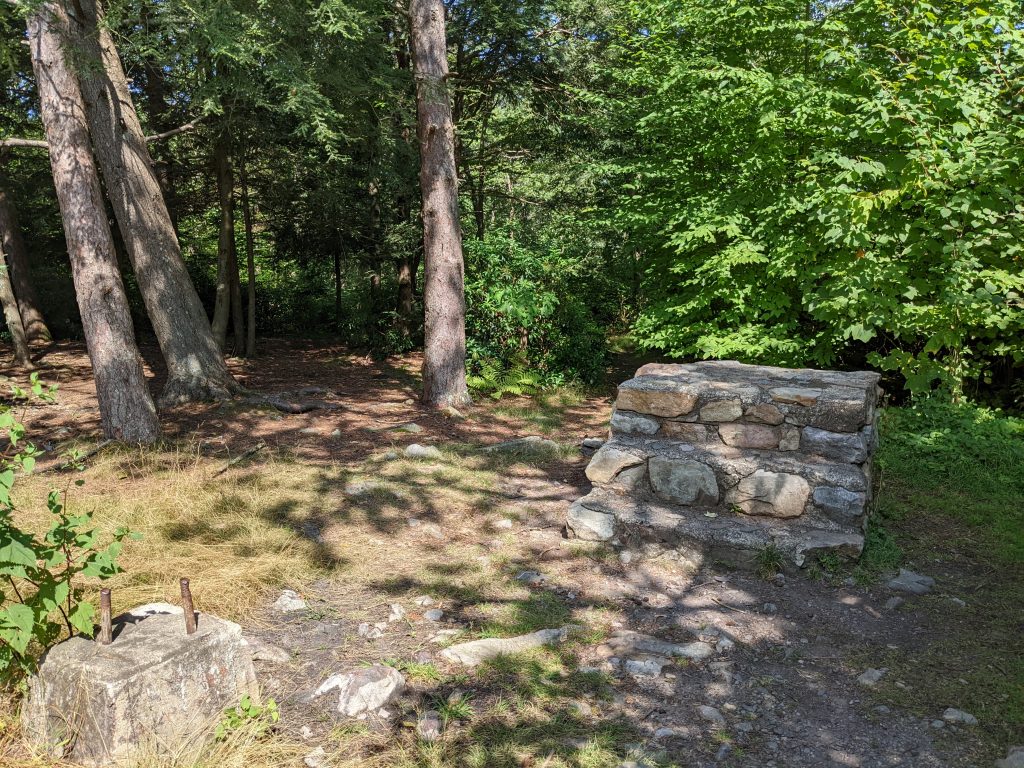 About a quarter mile west of the summit and on the left is a small overlook that looks south with views of both New Jersey and Pennsylvania and the Delaware River.  The view would be bigger without the leaves on the trees. 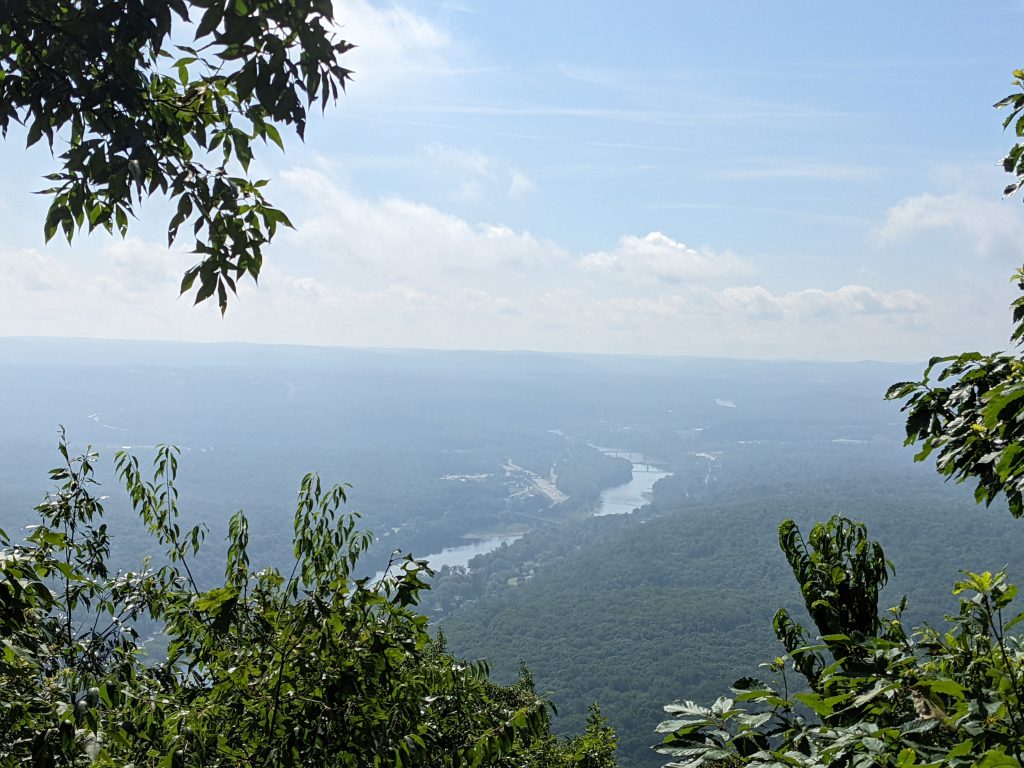 After sitting a bit, I headed back the way I came. 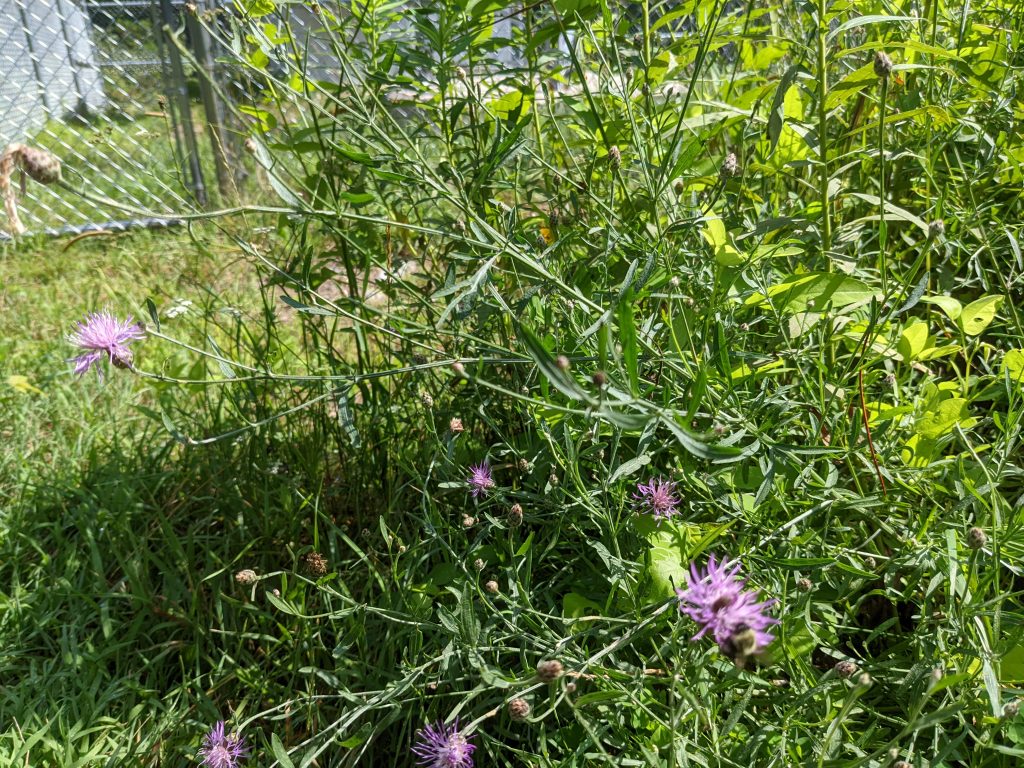 When I reached the viewpoint, there was no one around, which afforded me time to eat something.  It was sunny (and hot) and I had a great view of Mt. Tammany. 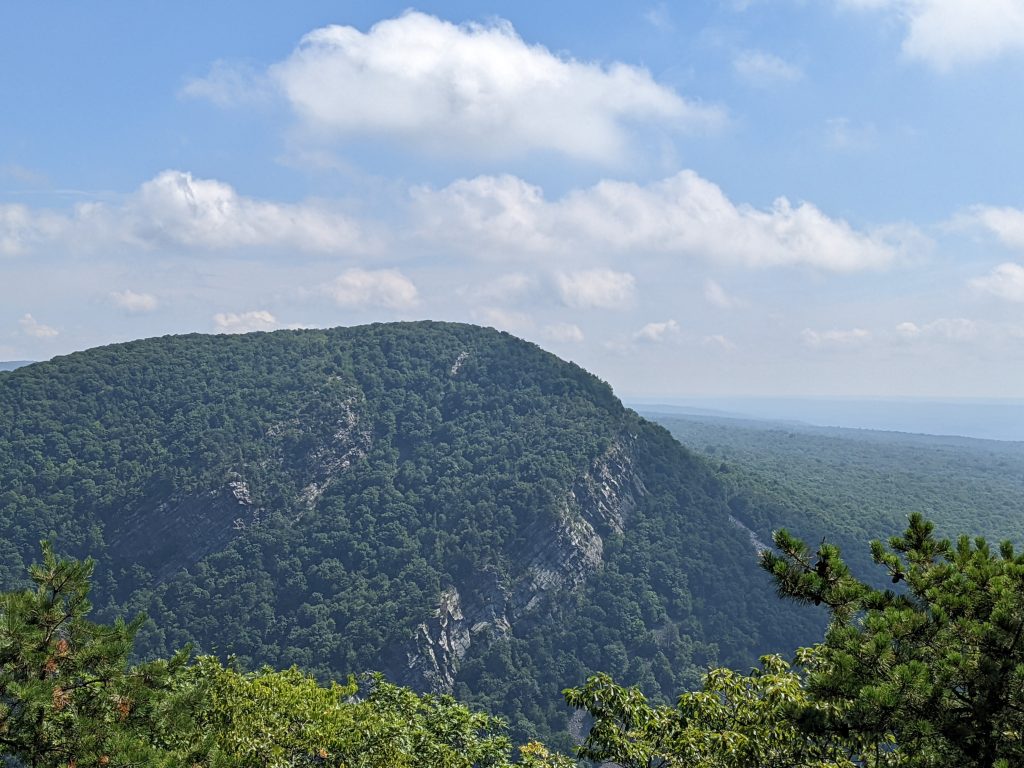 While sitting, I noticed a bunch of hawks flying around.  Some came suspiciously close. 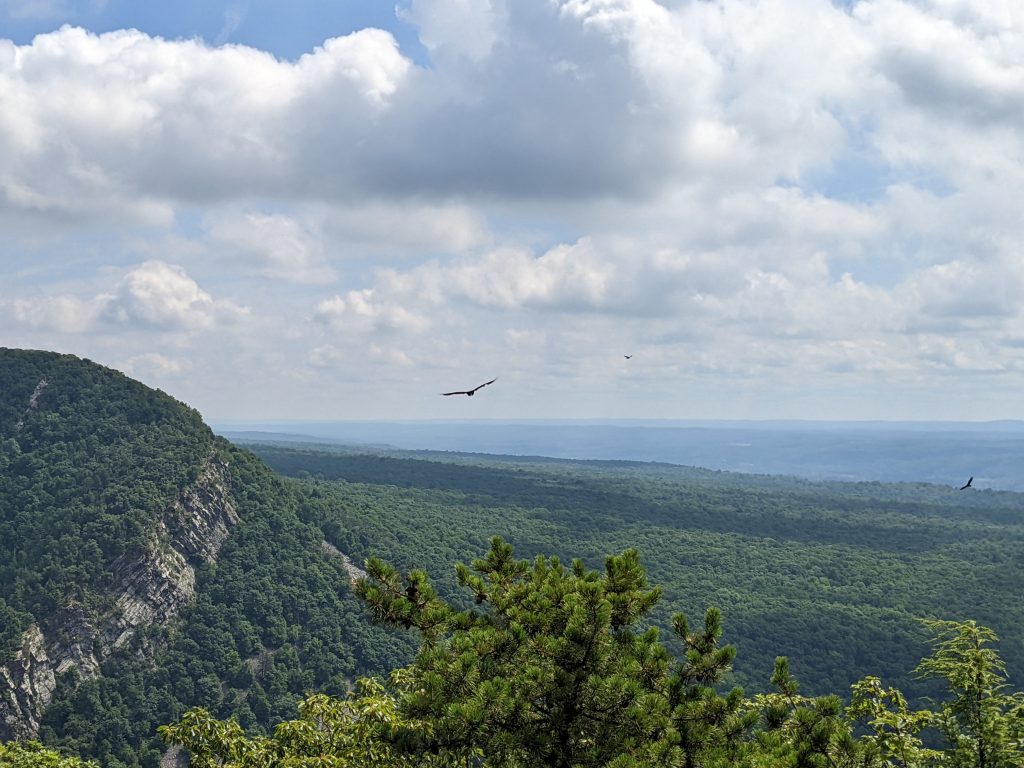 On the return trip, I took the Mt. Minsi fire road.  Before reaching the fire road, it was back through a Rhododendron tunnel, that was very dark.  I tried to get a picture, but the camera took in too much light.  This picture doesn’t do it justice, it was really dark in the tunnel. 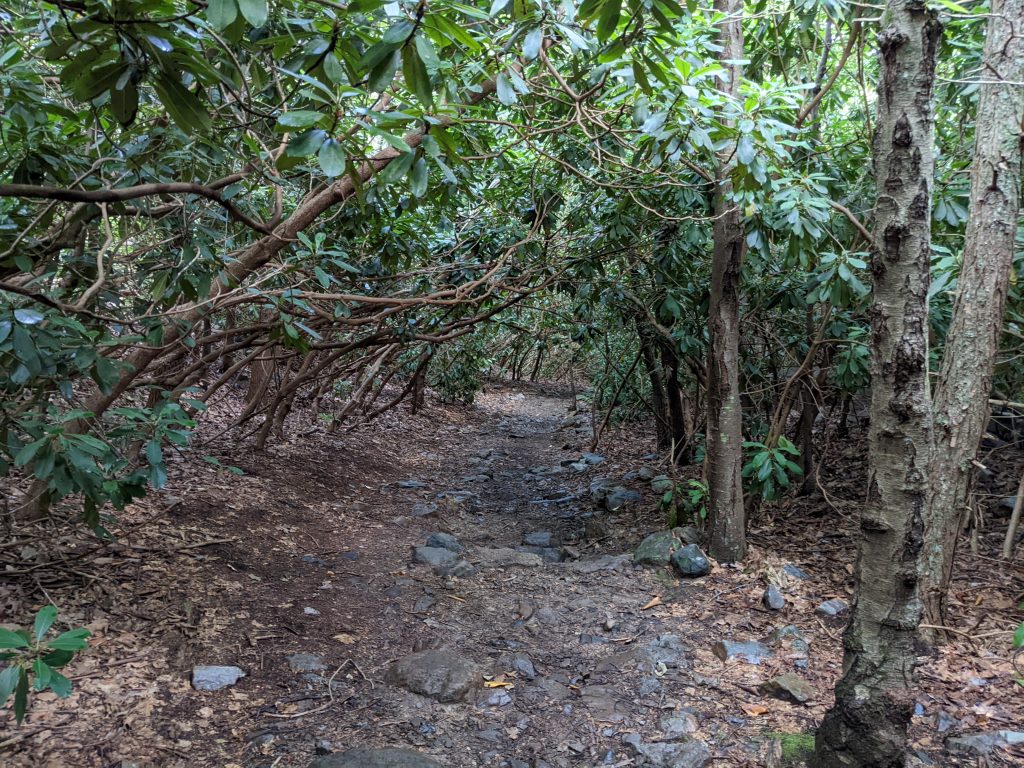 I was looking for Table Rock, so I turned off the fire road to a trail labeled Green on AllTrails.  It’s just marked as an unmarked trail on the NY NJ Trail Conference map.  I never did find Table Rock, maybe I should have stayed on the fire road longer.  This trail was definitely not used as much, but was interesting none the less. 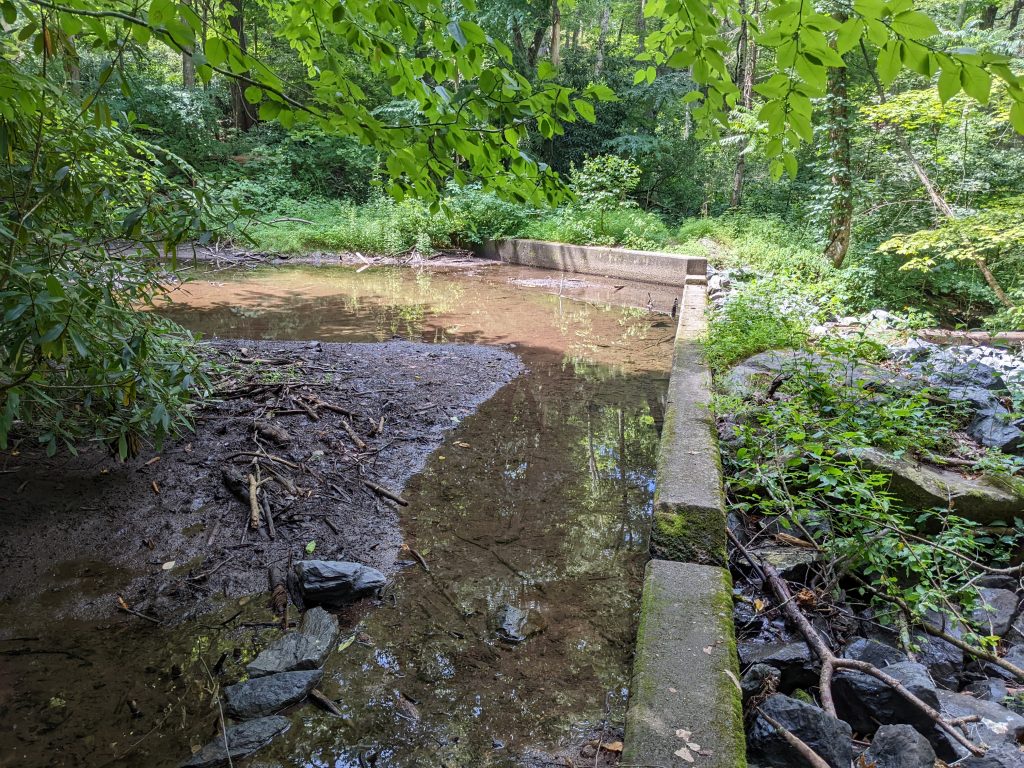 Two more unmarked trails took me to Lake Lenape, though from a different side.  There were tons of frogs all along the banks that jumped in the water as I approached. 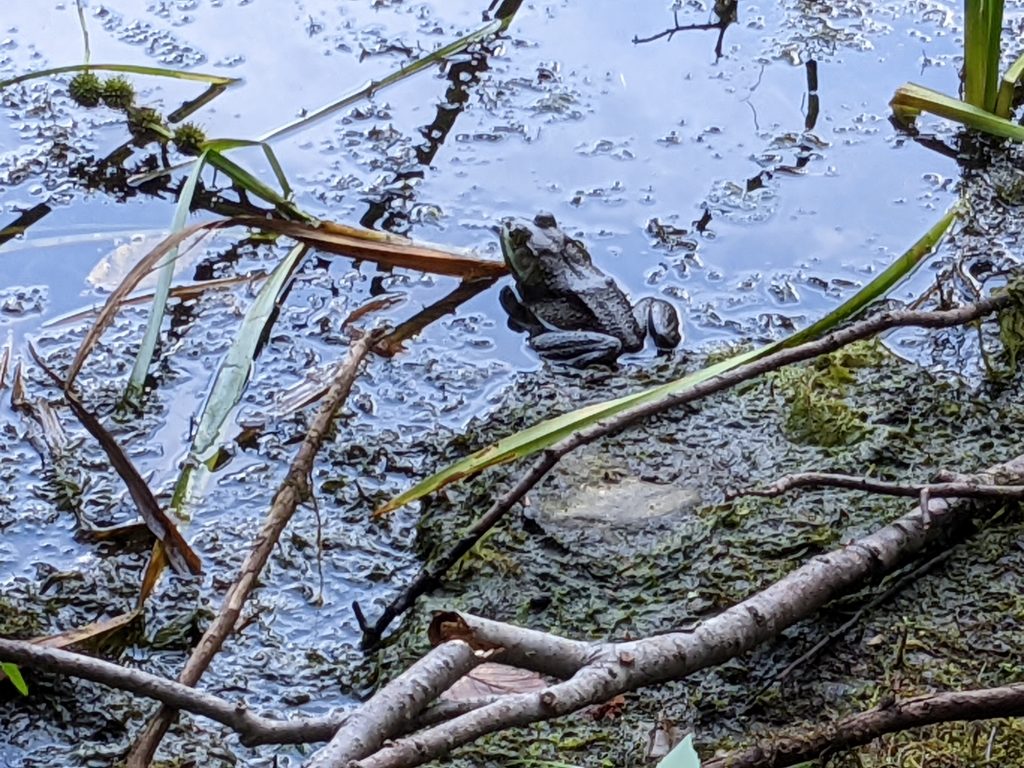 There were lots of people out and about today; not so much when I went off the fire road.  When I reached the parking lot, there were cars all over the place, but a welcome sight (and one I hadn’t see before) was Trail Magic – a van set up with food and cold drinks for AT thru-hikers. 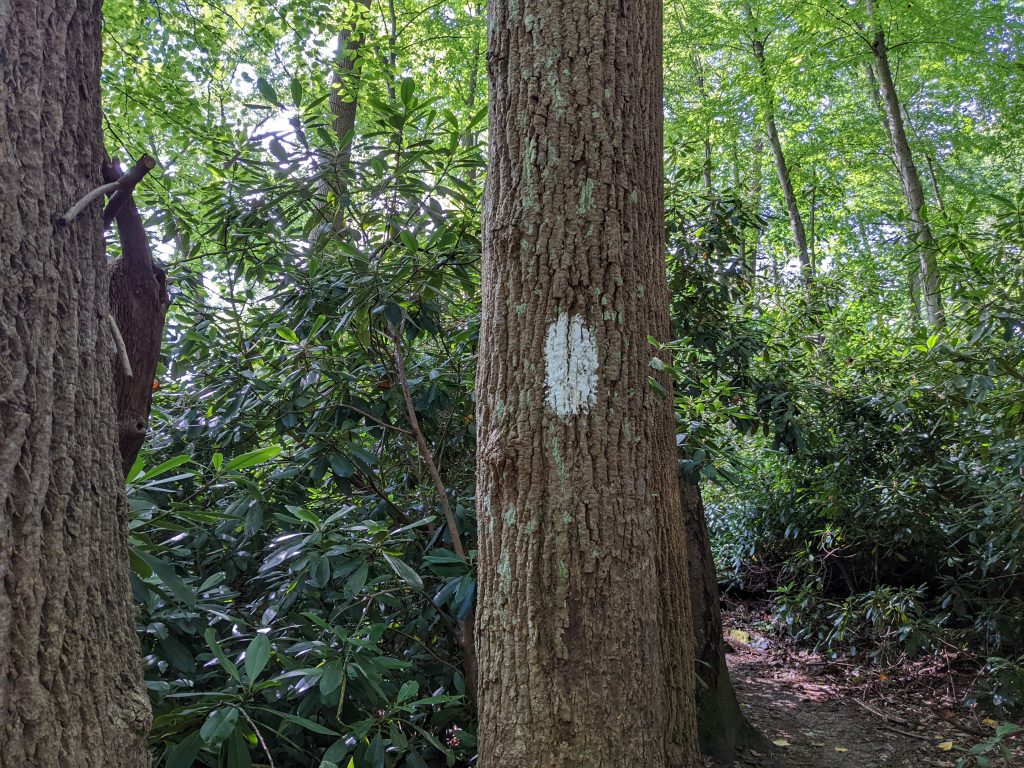 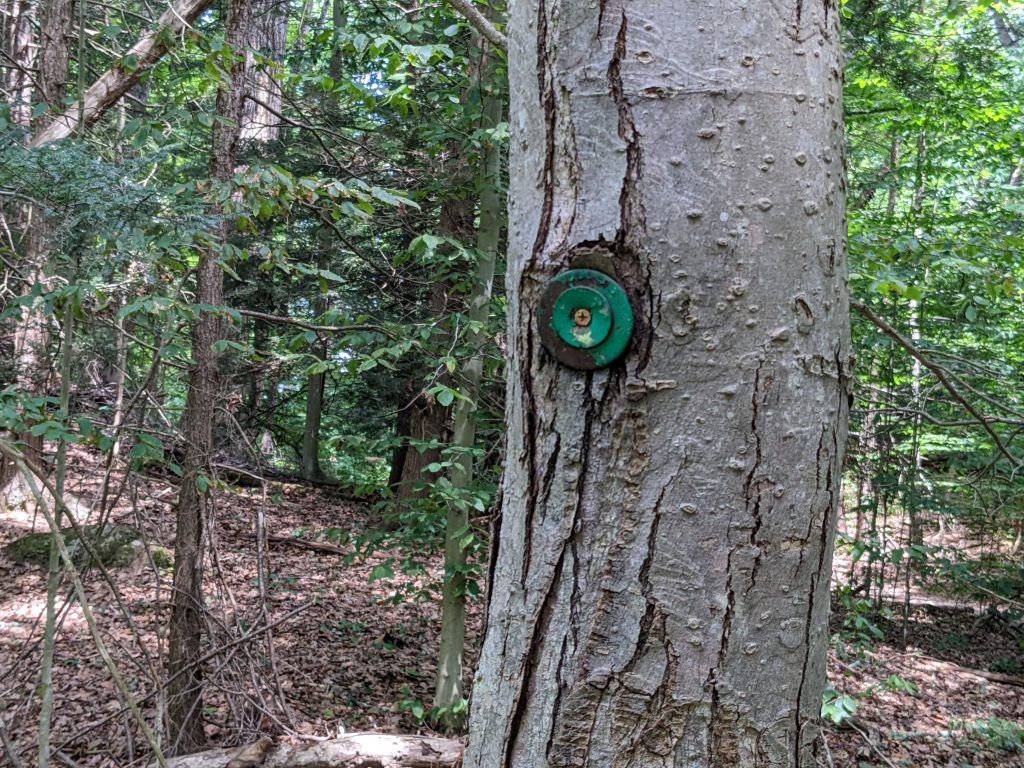