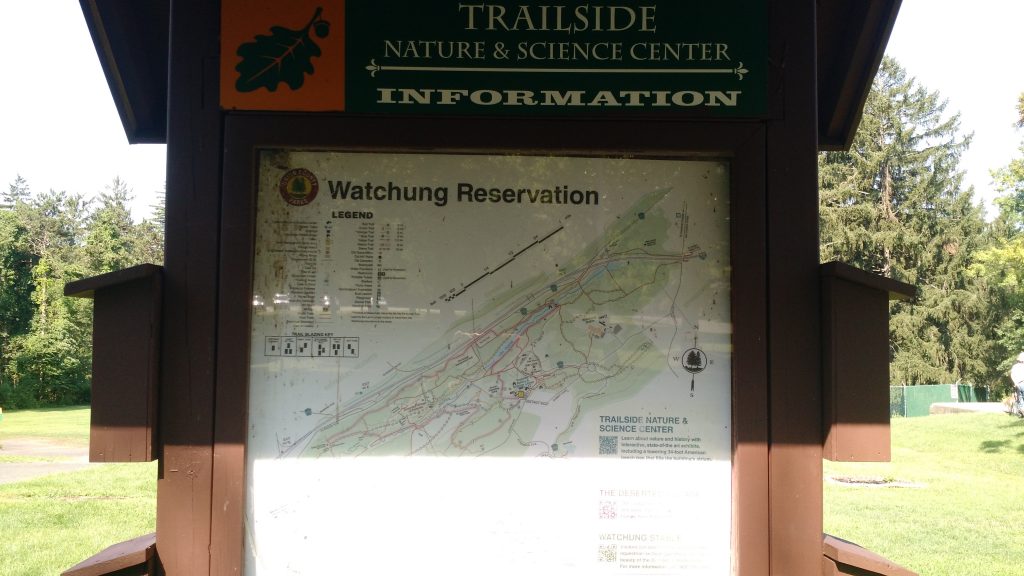 Trails:  Sierra (though a few connectors were used)

After not being able to hike for a few weeks, I was ready to get out and hit the trails.  It poured multiple times yesterday, so today had to be the day.  I knew it would be warm (really, hot) with high humidity, I just didn’t know how hot and humid.  My plan was to hike the whole Sierra trail, but it was too hot.  I cut back when I reached the dam by the lake as I was running low on water – and I brought extra water for the hike.  Because it rained yesterday, the lower portions of trails were really spongy…outright muddy in parts.  And where there was mud, there were gnats.

Finding the actual trail head wasn’t the easiest, fortunately, I printed out directions from the great folks at NJHiking.  Once I started, the hike was pleasant enough, it gradually went uphill, with lots of different trail types. 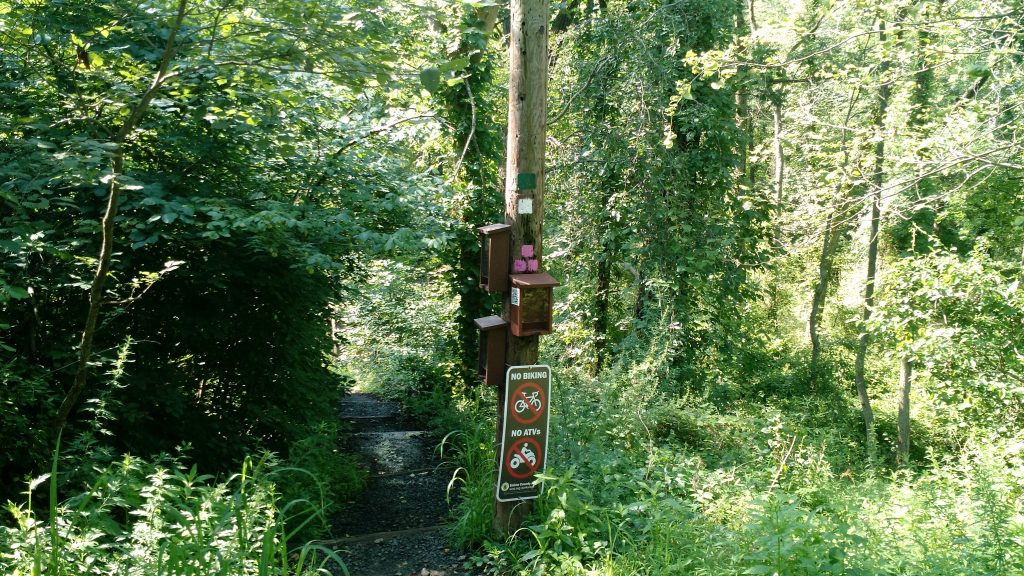 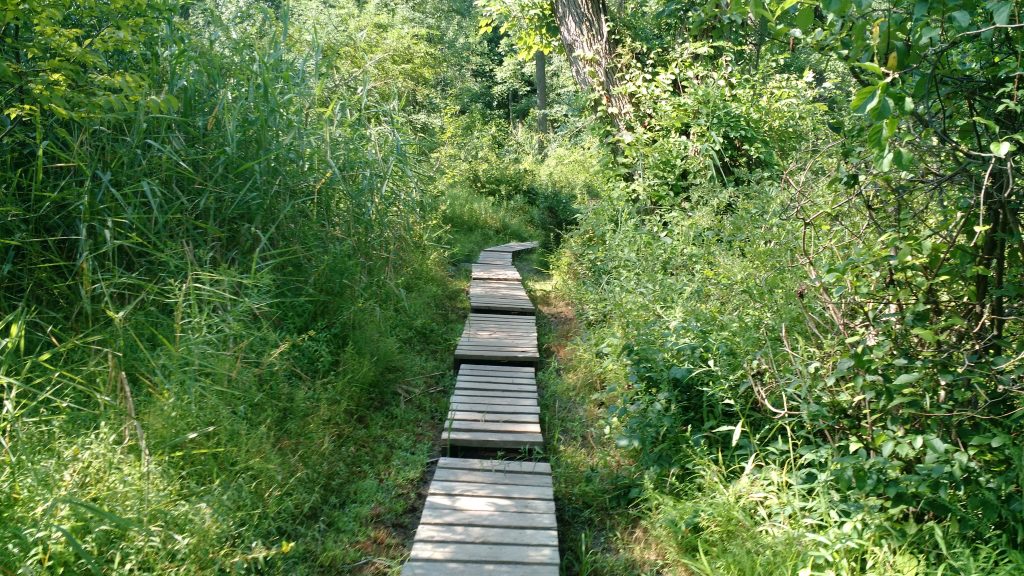 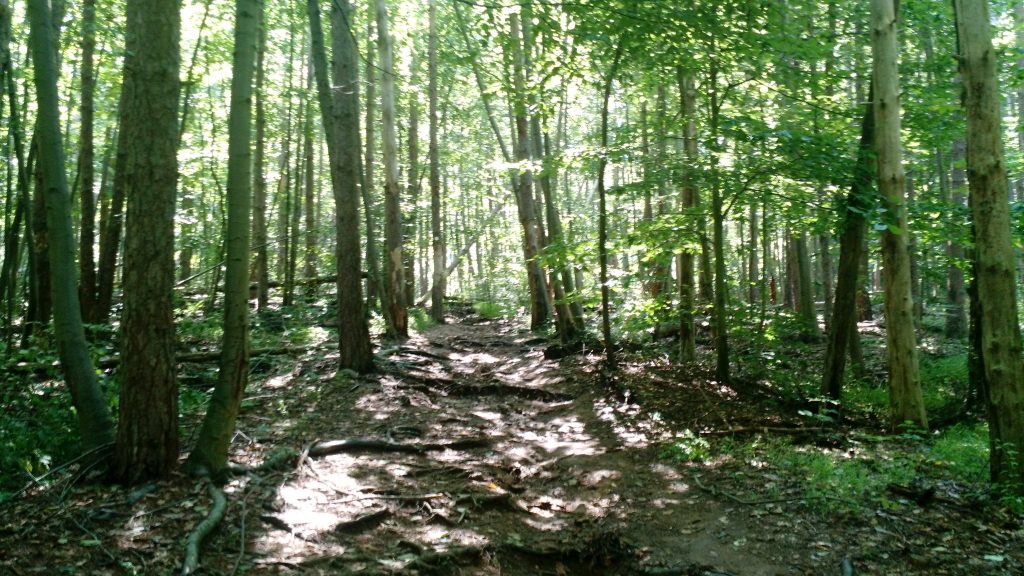 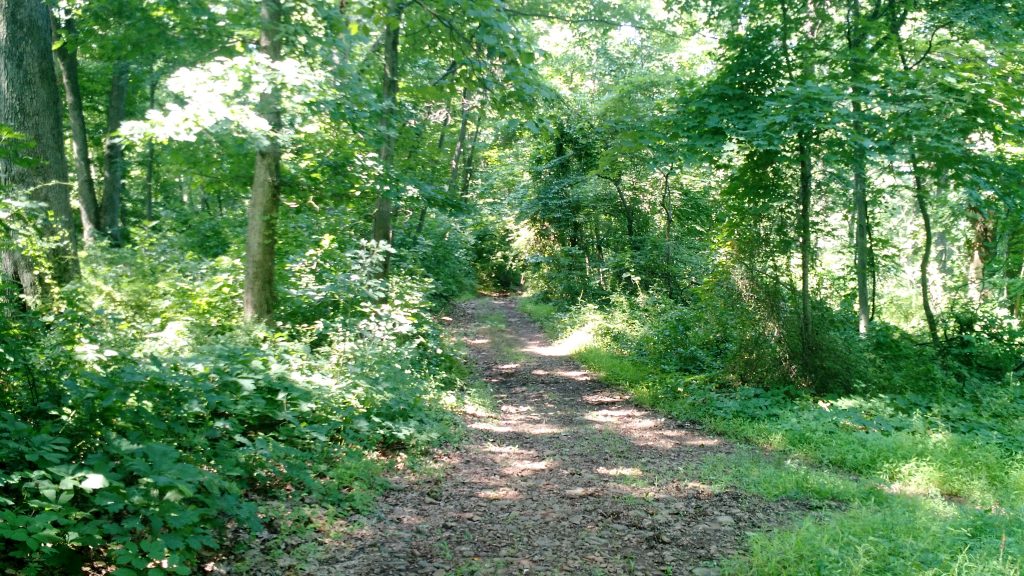 Before reaching the picnic shelter, I found myself on the purple trail.  I was following white, and the next thing I knew I T-intersected purple.  Thank you AllTrails, for getting me back on white.  However, I had to make a steep incline to get back.  I don’t know if I had followed white properly if I would have routed around the steep portion.

The trail paralleled Sky Top Drive with a nice overlook towards the quarry.  After the descent, the trail followed Blue Brook. 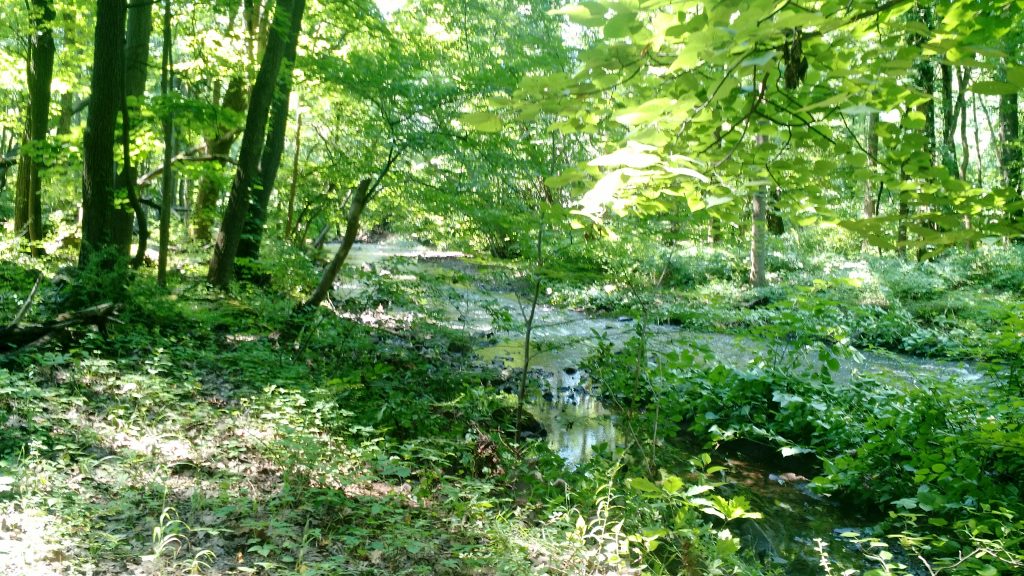 It was really neat to walk through the foundations of the mill, and believe it or not, it was noticeably cooler in this area. That wouldn’t last for long. 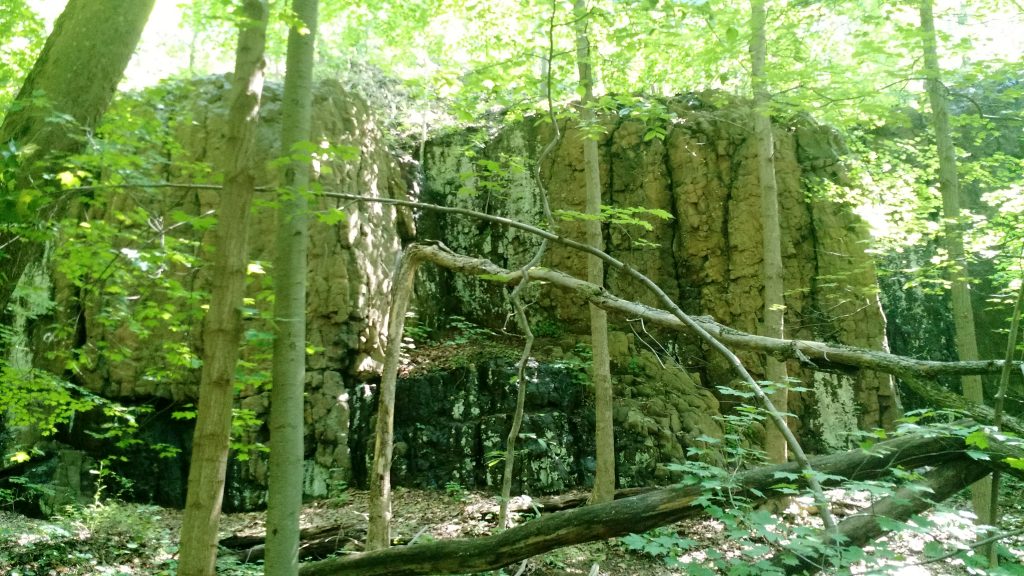 After the mill the trail turns away from the creek, and runs straight uphill.  Steeply.  At the top, I needed a water break.  Fortunately, I was at an overlook, looking northwest.  Route 78 is in the background. 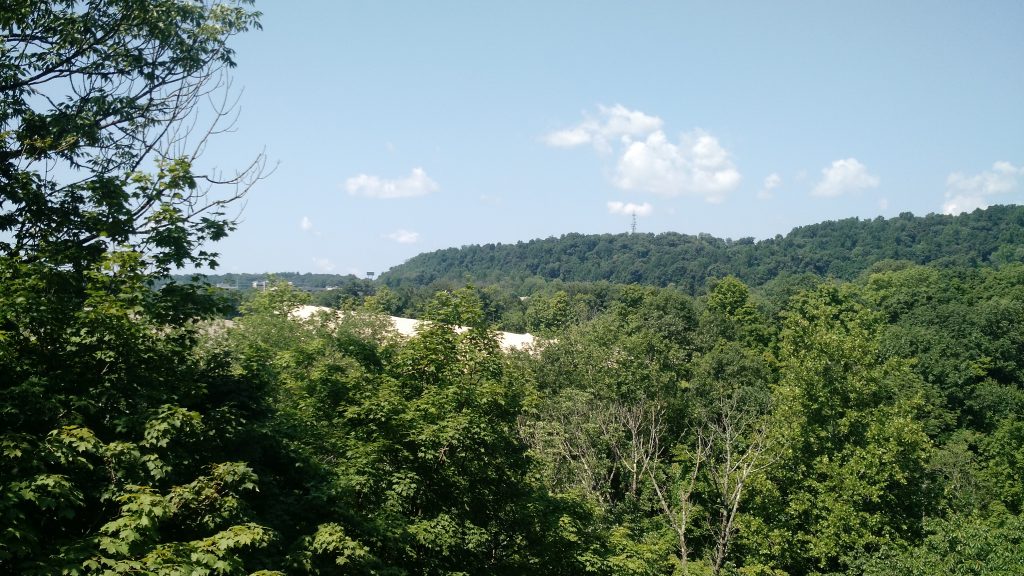 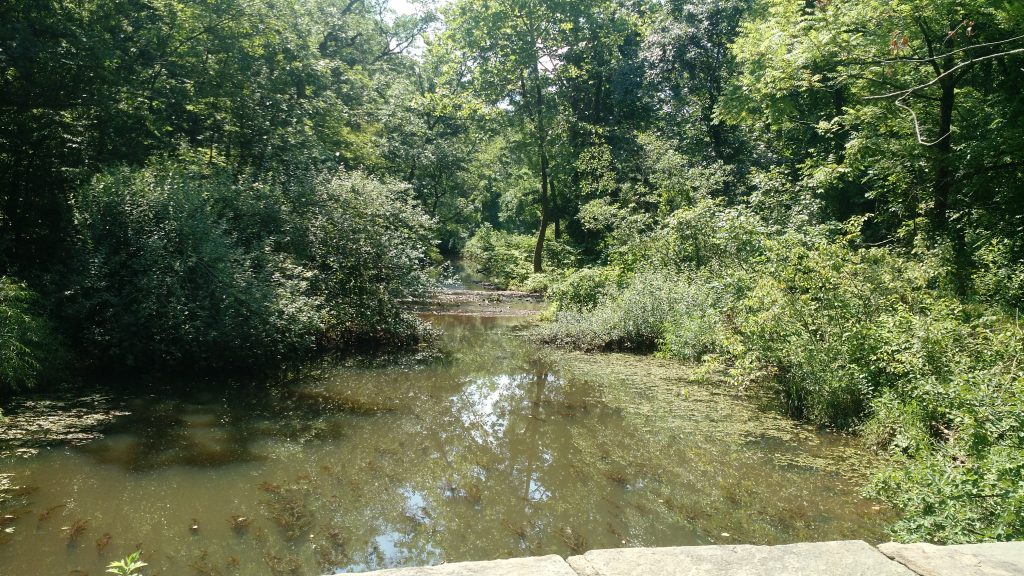 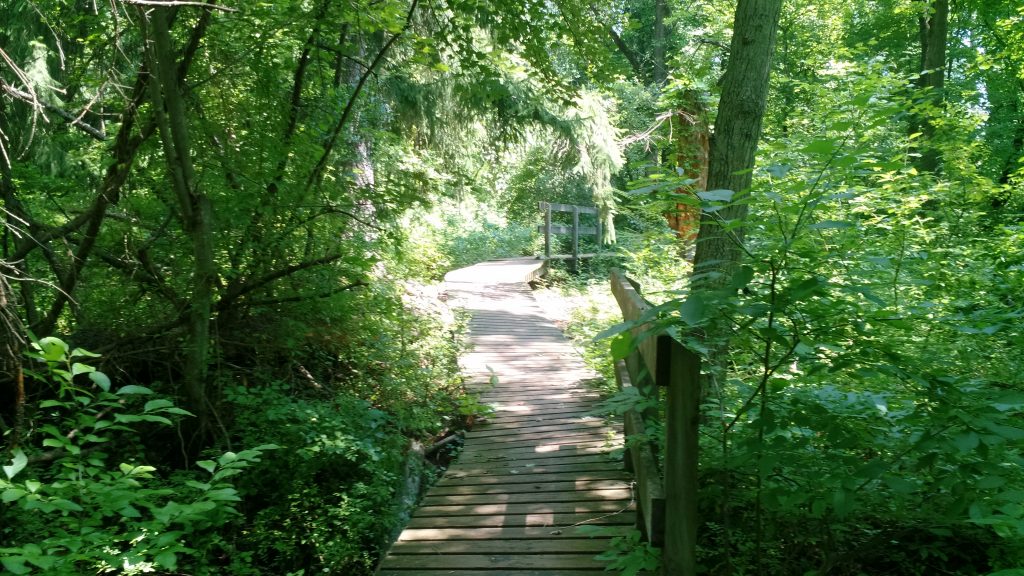 I met two guys with dogs on this boardwalk.  One dog didn’t like people and was leashed.  A basset hound was following unleashed.  I passed three other groups of people with dogs during the hike, none of the dogs were leashed.  One family was calling one of their dogs, it had taken off into the brush off trail, and they had no idea where it was.  None of the owners had water for their dogs, which I thought criminal.  Further, I had to get off the trail once for a mountain bike – which is expressly forbidden.

One of the neatest aspects of the hike was coming upon the abandoned village of Feltsville. 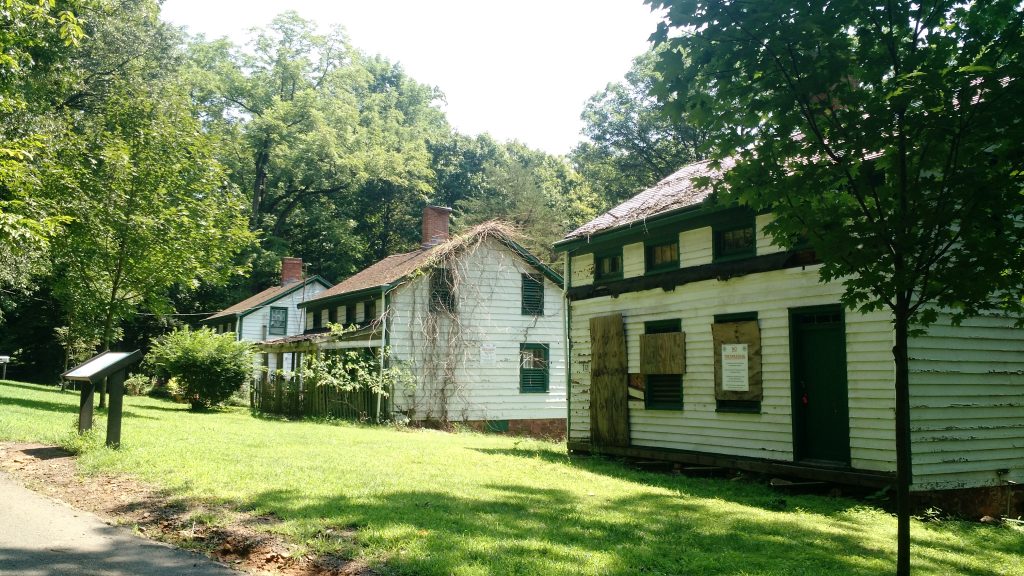 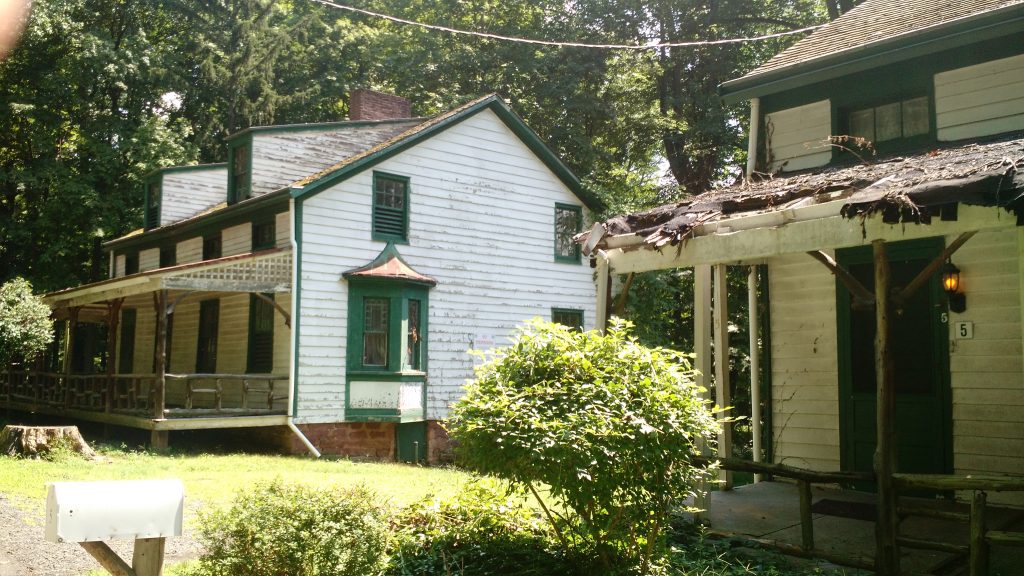 Notice in the picture above…the porch light is on.  So, while the houses are abandoned, there is electricity running to them.

I passed a barn when I came out of the trail, it looked like people were setting up for a party or wedding.  I was so hot, I thought about sauntering over and helping myself to some cold drinks.  The way I looked at the time (soaking wet) I doubt anyone would have risked approaching me.  It looked like it would have been a nice party.  I carried on. 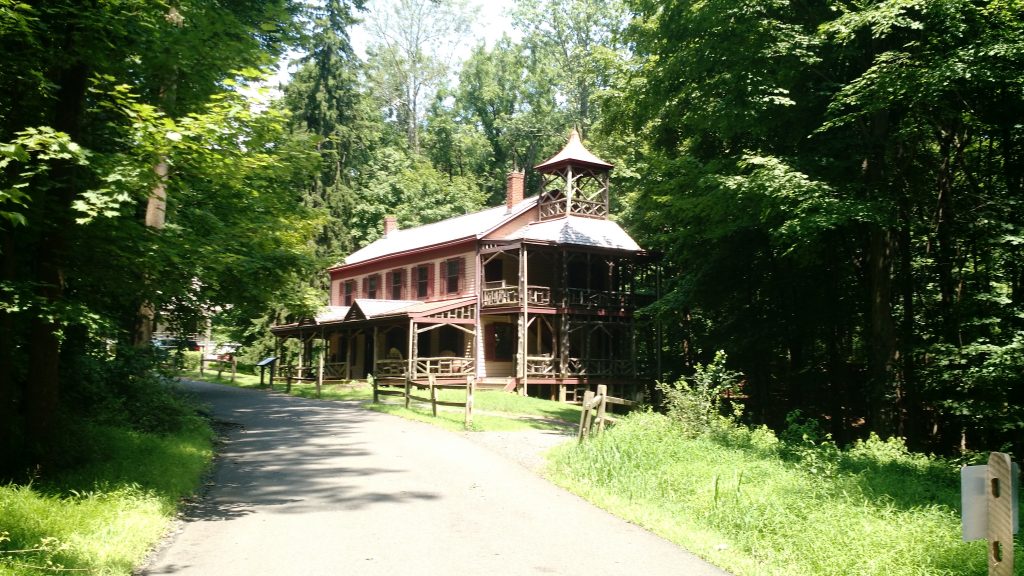 Behind the house pictured above was the Revolutionary War cemetery. 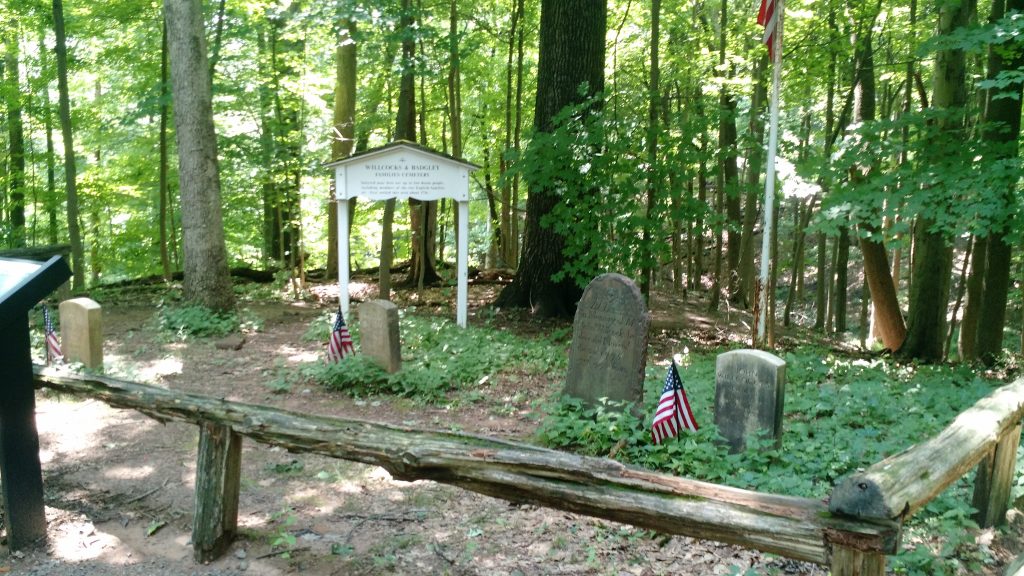 I turned around, and lo and behold, there was a white blaze.  I followed that to the dam. 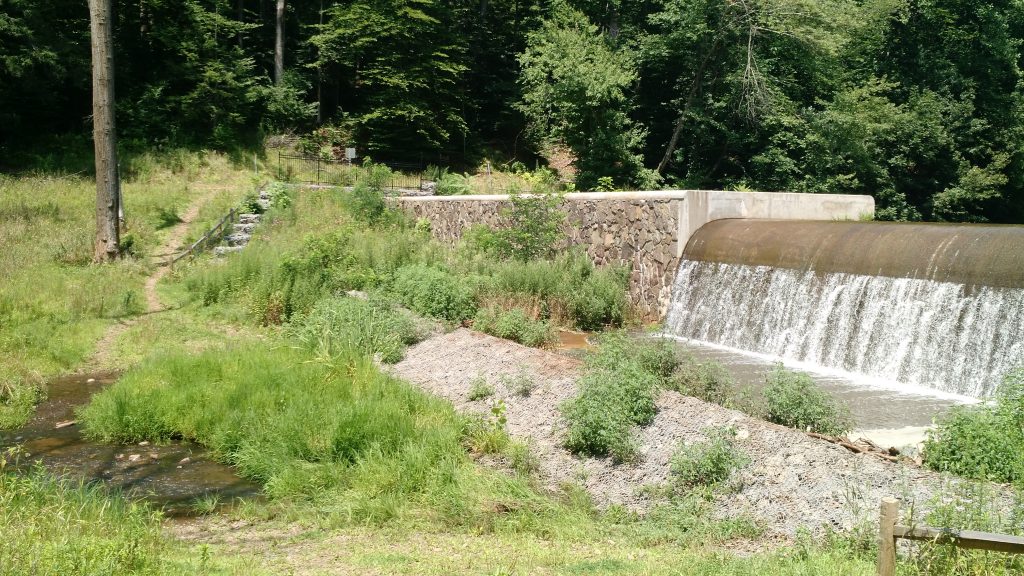 The water was too deep to ford, I rock hopped onto the mesh and crossed that way.  Sorry.  From there I took a horse trail to the blue trail, then orange, and made my way back to my car.

Even though I brought extra water, I never would have made it around the lake, it was just too far under these conditions.  I think I made the right decision.

This was definitely a hike to go blaze to blaze, you had to stay alert and keep a lookout.  Trails were well marked and it was apparent which way to go at most junctions.  There were a few tricky ones.  There are a bunch of blow downs that need clearing.  I met two hikers that heard a tree fall, though they didn’t see it.

I finished up by going into the nature center – it was air conditioned.  While the exhibits were great, I hung out by the water fountain.  Definitely a great hike, though the heat and humidity made it tough.

Ticks: 0  (Surprising, as there were some overgrown spots.)